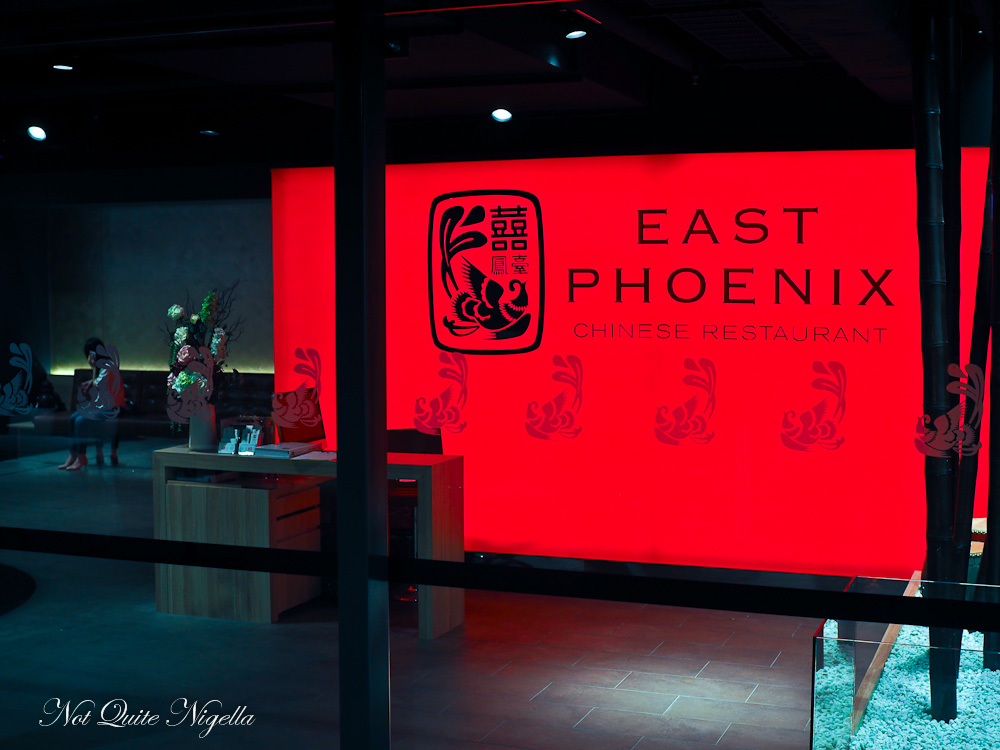 Every holiday season, as cafes and restaurant close for the holidays we inevitably make our way to yum cha. It's no hardship of course, it's something that we all look forward to. And this time we are trying East Phoenix, part of the Sky Phoenix chain, located at East Village in Zetland.

It was a last minute change where our carefully crafted Saturday plans were suddenly thrown into the air. Around 12noon I started to get peckish and by 1pm I was ravenous having skipped breakfast. I thought of the only solution I had for a quick meal: yum cha. 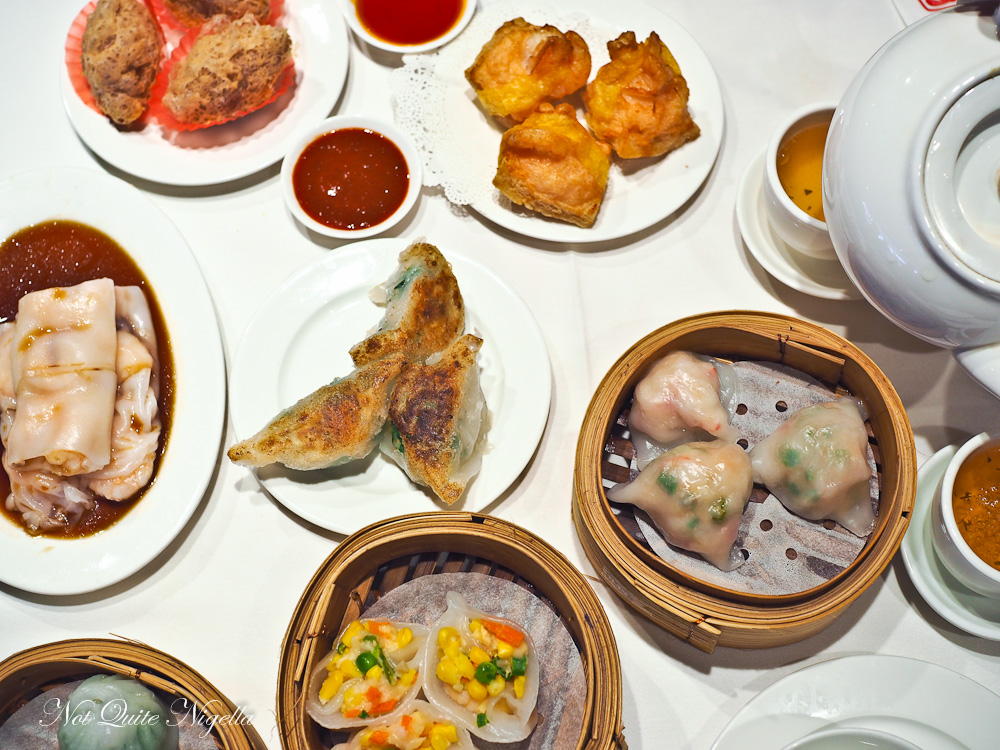 "But I don't liiike yum cha. I never get what I want," says Mr NQN sullenly. He's not wrong, every time we want to order har gow prawn dumplings with the silky semi translucent skin, they never come round.

"I promise, we will get har gow," feeling a little like a mother that has made a deal with a kid. 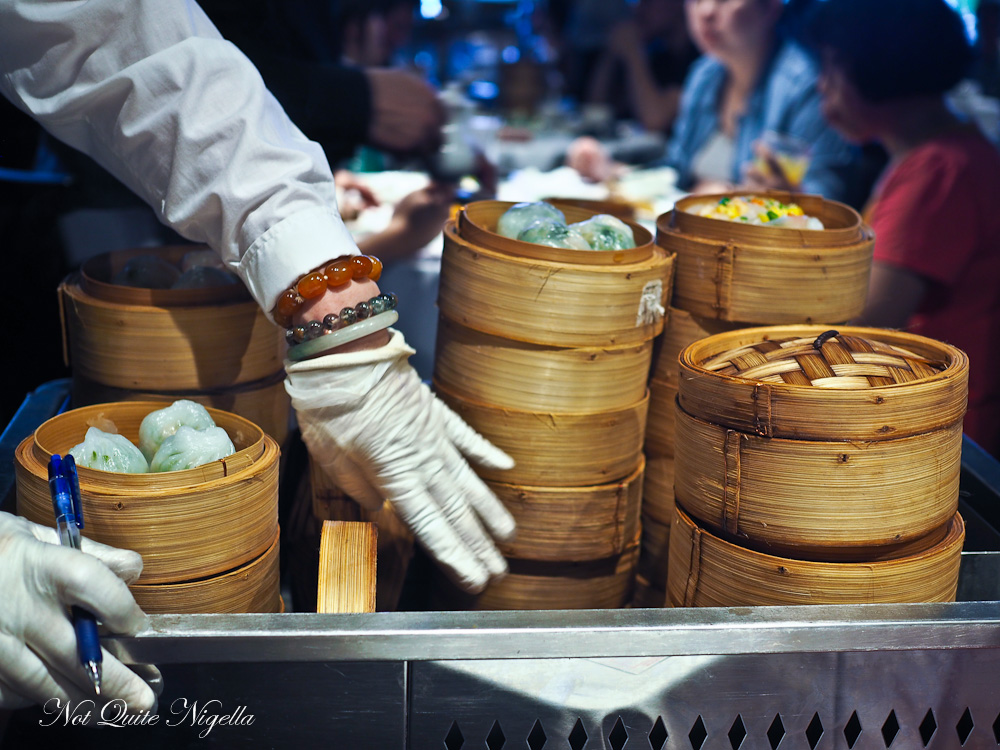 We arrive at Sky Phoenix at East Village. It is past 1pm there's no queue (phew! I was getting hangry) and we immediately shown to our table. Within a minute a trolley woman glides past and she removes all of the steamer lids. "We've got seafood dumplings, chive dumplings, seafood and chive dumplings and char siu bao," she says in her direct, no nonsense manner. We order a few and then comes the next woman, the "fried lady" with spring rolls, prawn toast and duck and taro footballs (not the technical term ;) ). They initial the tally card and then the teapot gets plonked down on the table spilling a little tea out of the spout and we are ready to eat within 3 minutes of entering the restaurant. Even Mr NQN can't help but smirk at the expediency of it all. 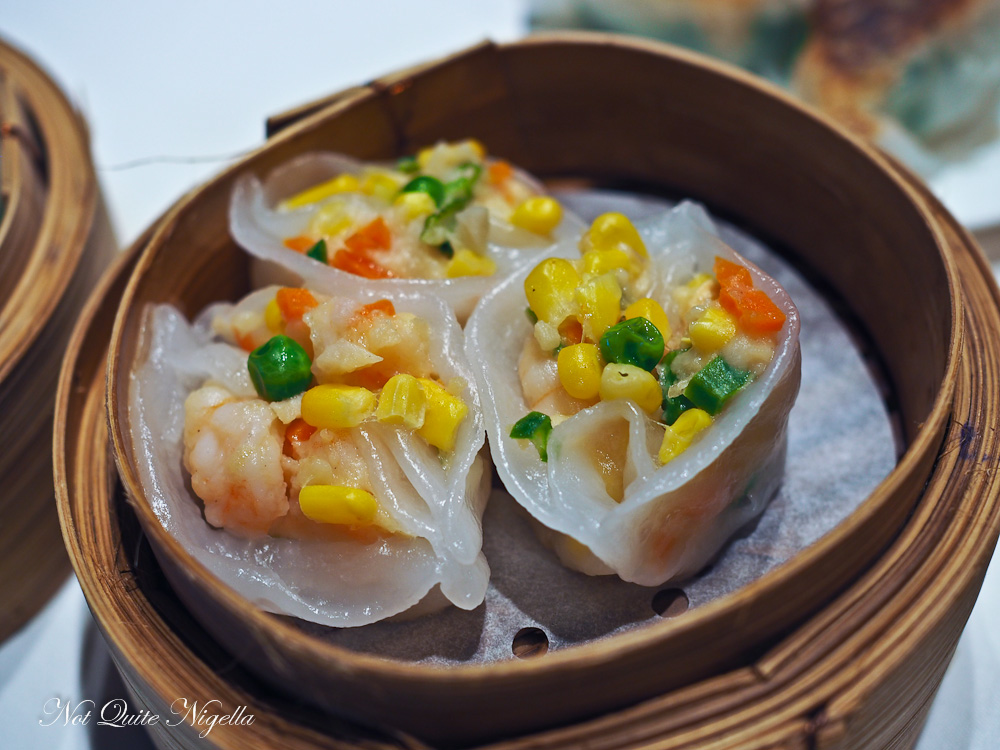 I was attracted to this because it was colourful which isn't the wisest way to select a dumpling. These are best with the chilli sauce as they're not strong in flavour. 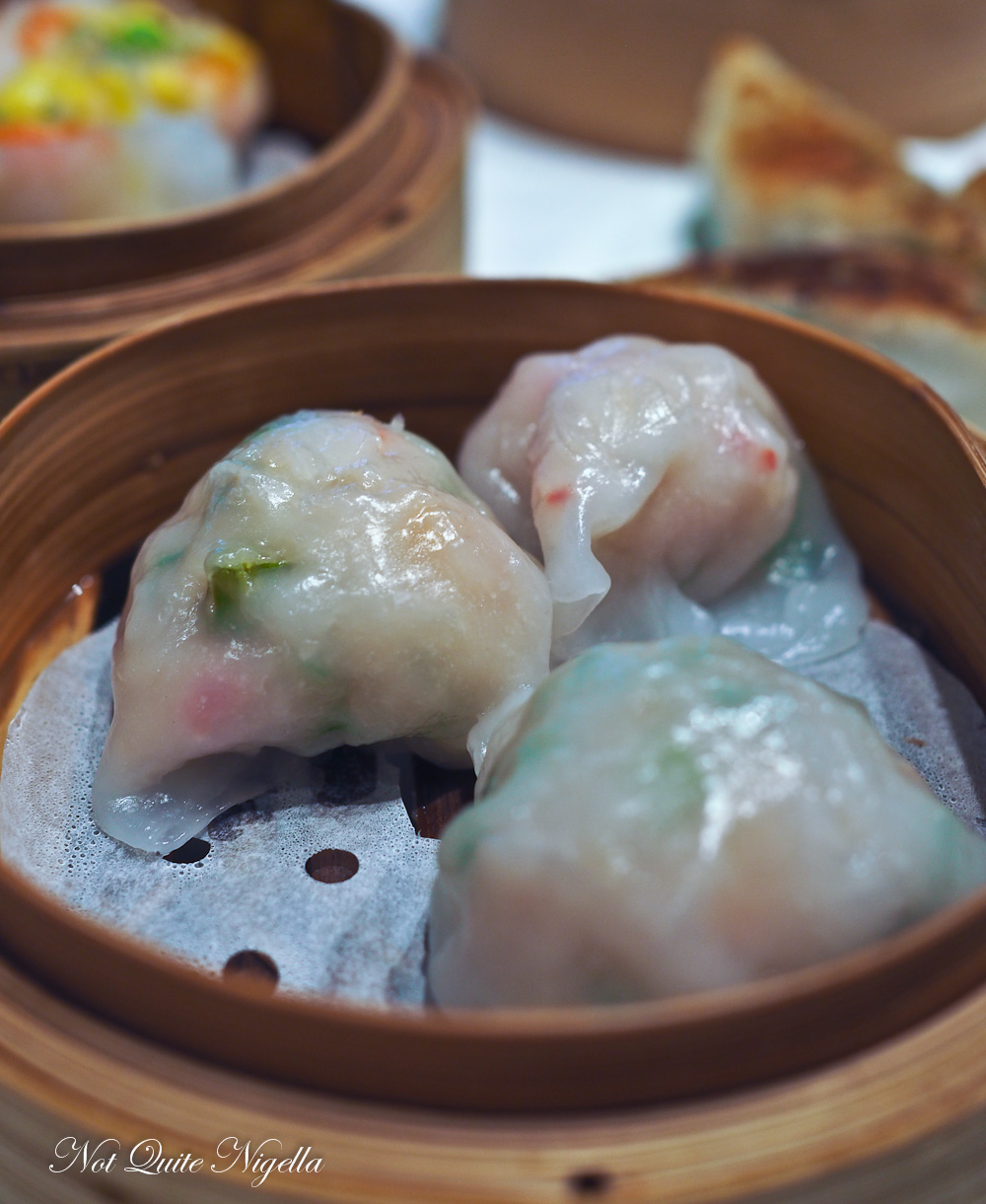 Most of these dumplings are a variation of seafood and chives or vegetables. This look like it had surimi in it too with some pink bits and these are perhaps my favourite of the meal as they don't even need the chilli sauce to flavour them. 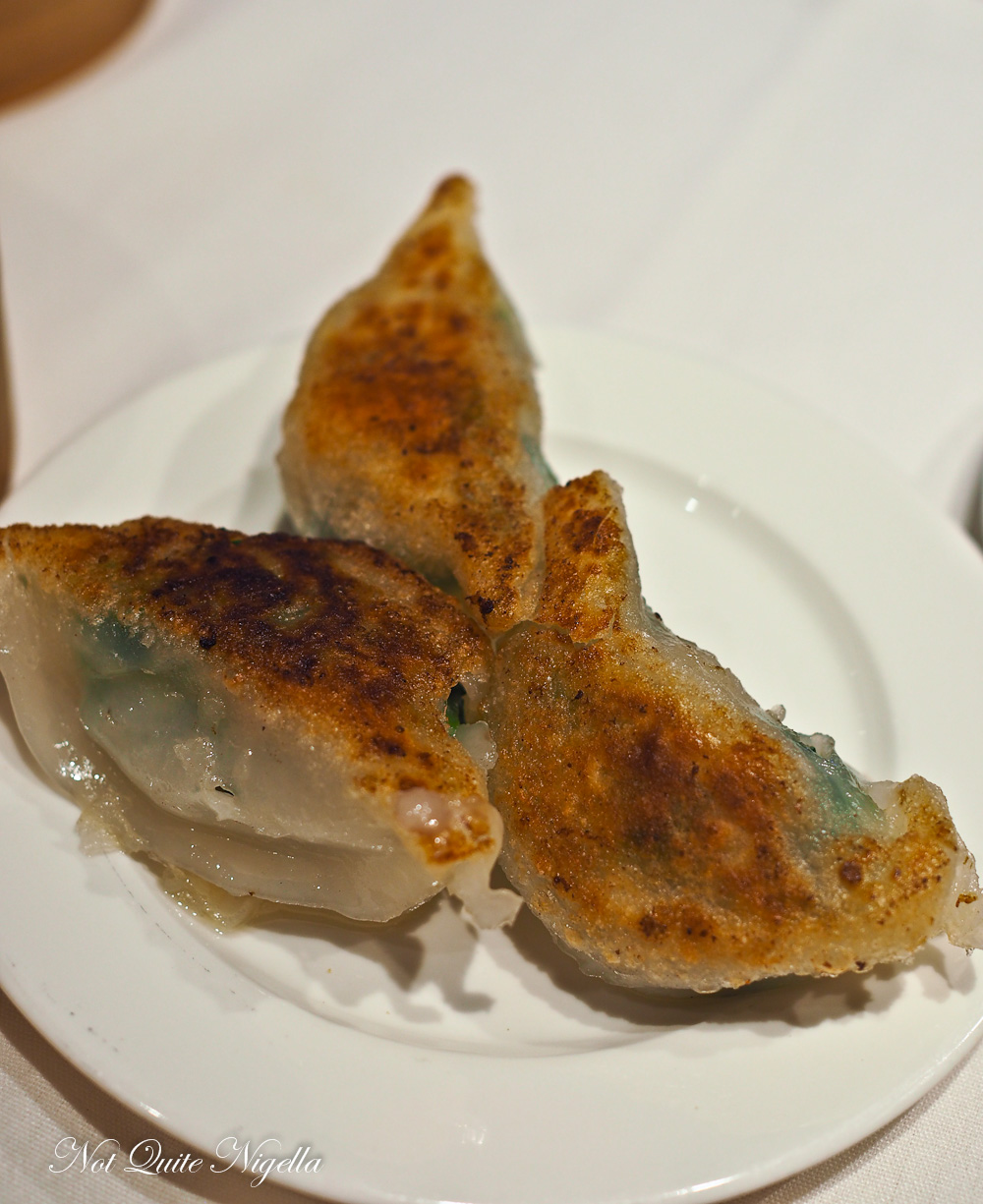 Another favourite is the pan fried chive and prawn dumplings. The filling is perfectly seasoned and I like the edge of crispiness to go along with the sticky wrapping of this dumpling. 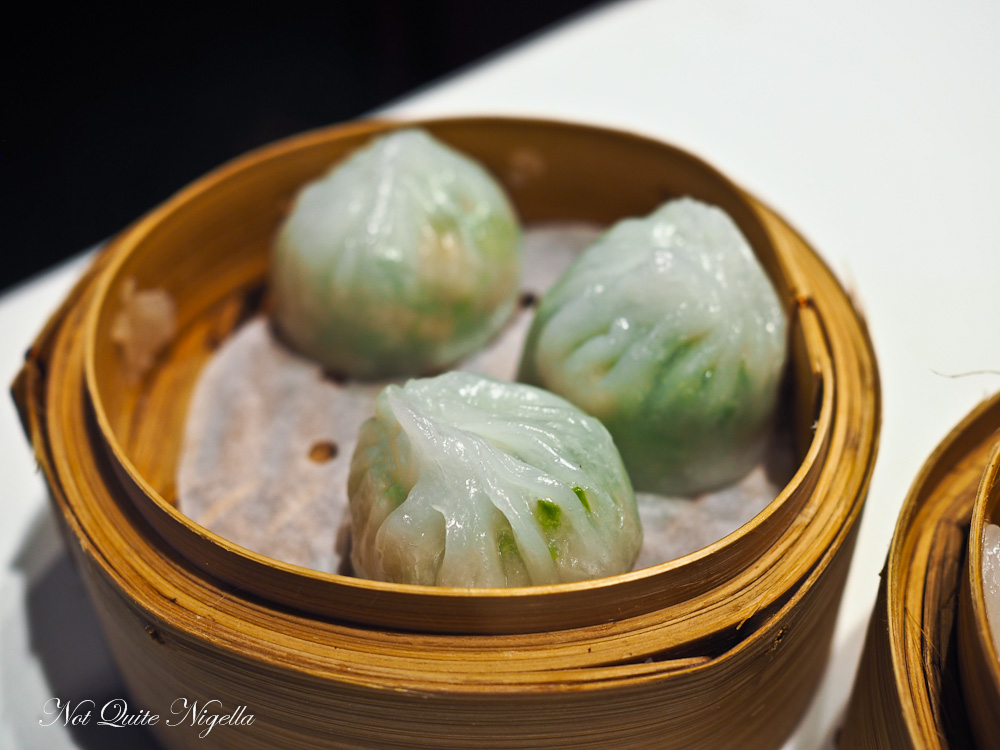 Neither of us were really taken with the purely vegetarian dumplings although they did have a good crunch to them from the water chestnuts. 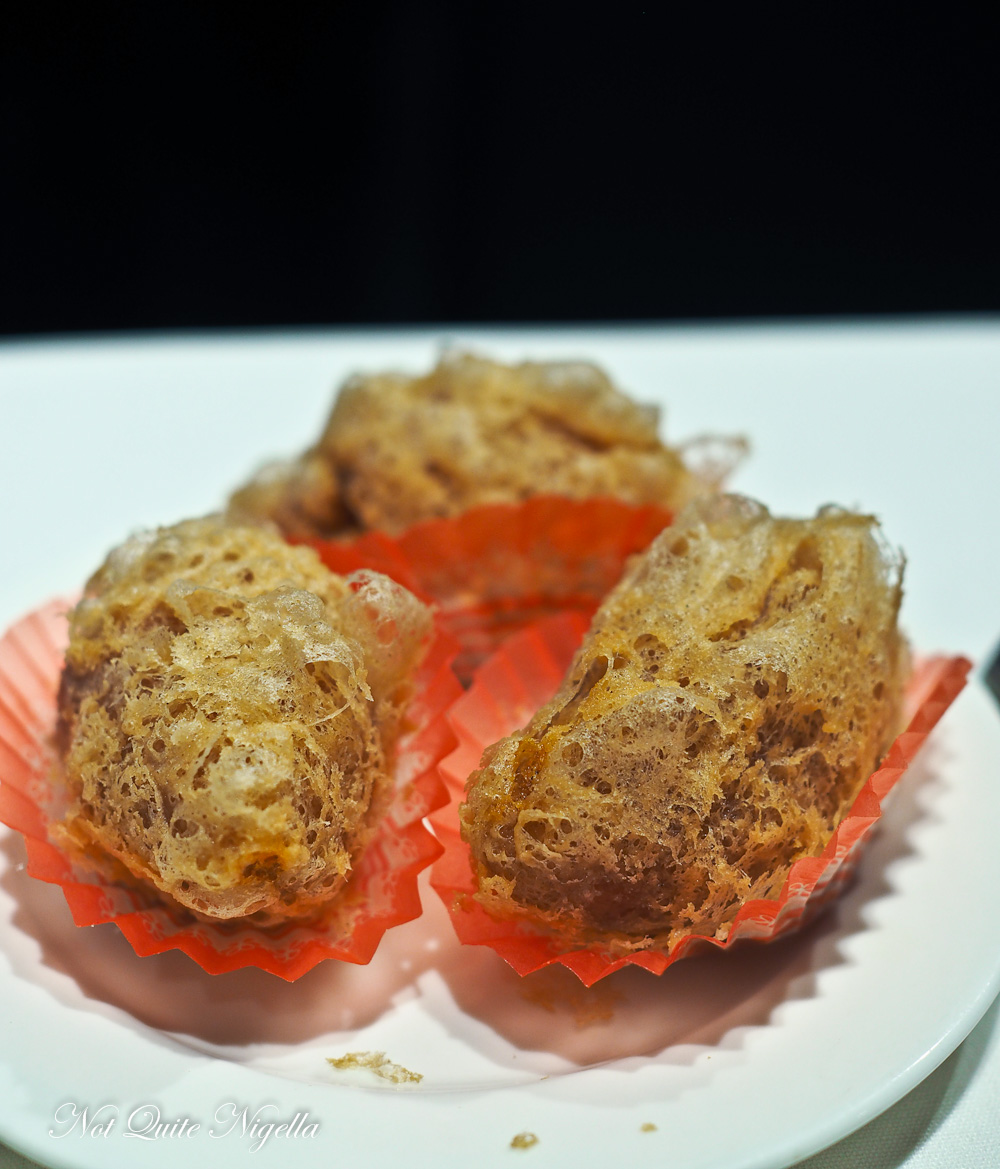 While dipping this into the sweet and sour sauce, I accidentally drop the whole thing in. Oops! "I hope you like that sauce," says Mr NQN dryly. I think he was still in a mood because I had tried to procure some har gow dumplings to no avail. We tend to order the steamed over the fried items, this is always a firm favourite. It doesn't need the sauce too but hey if you happen to drop it in there, it's fine too ;) 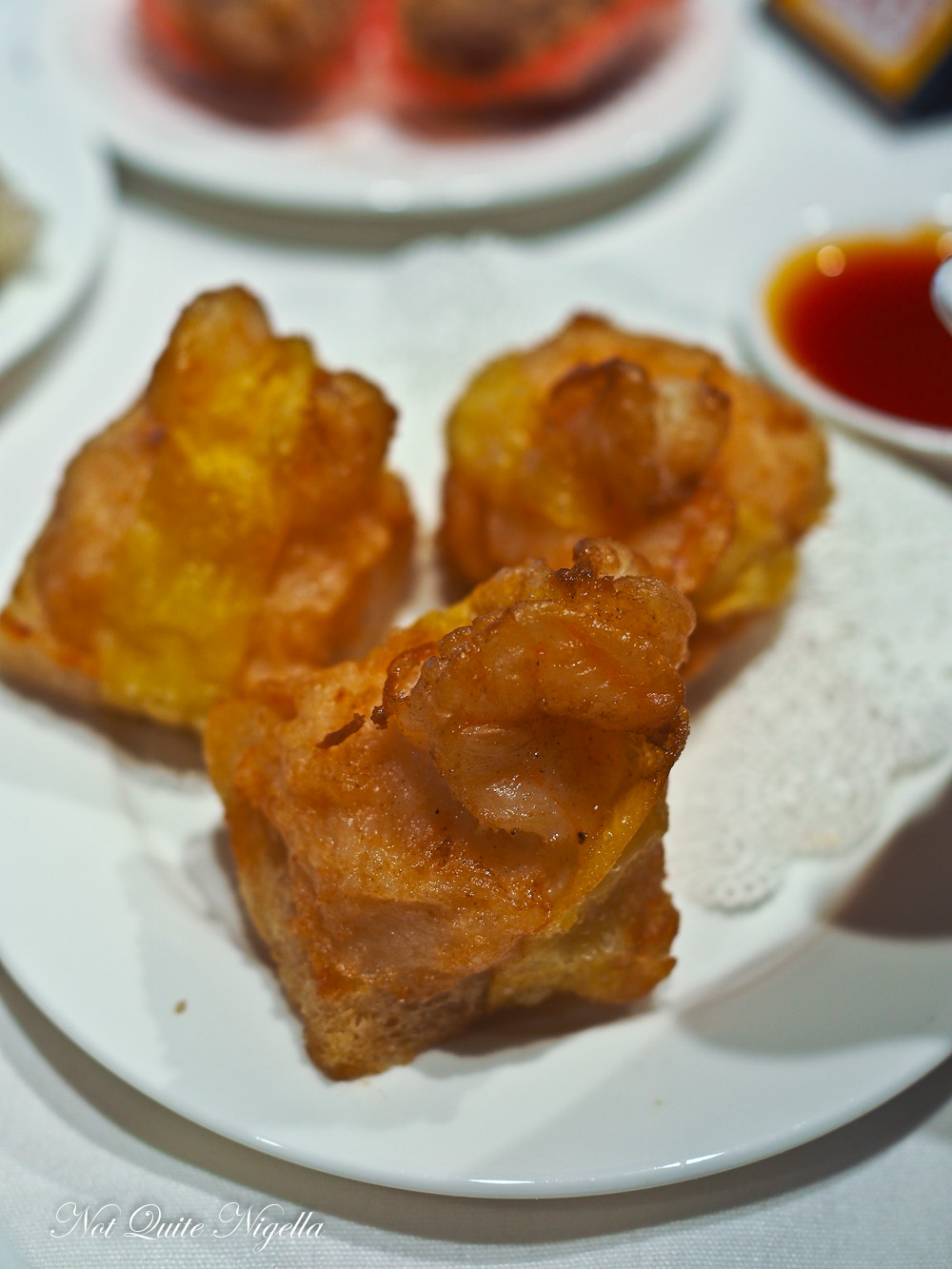 As a prawn toast enthusiast, I prefer a bit more sesame to the prawn toast and this one doesn't have much of it at all. It's a bit disappointing. 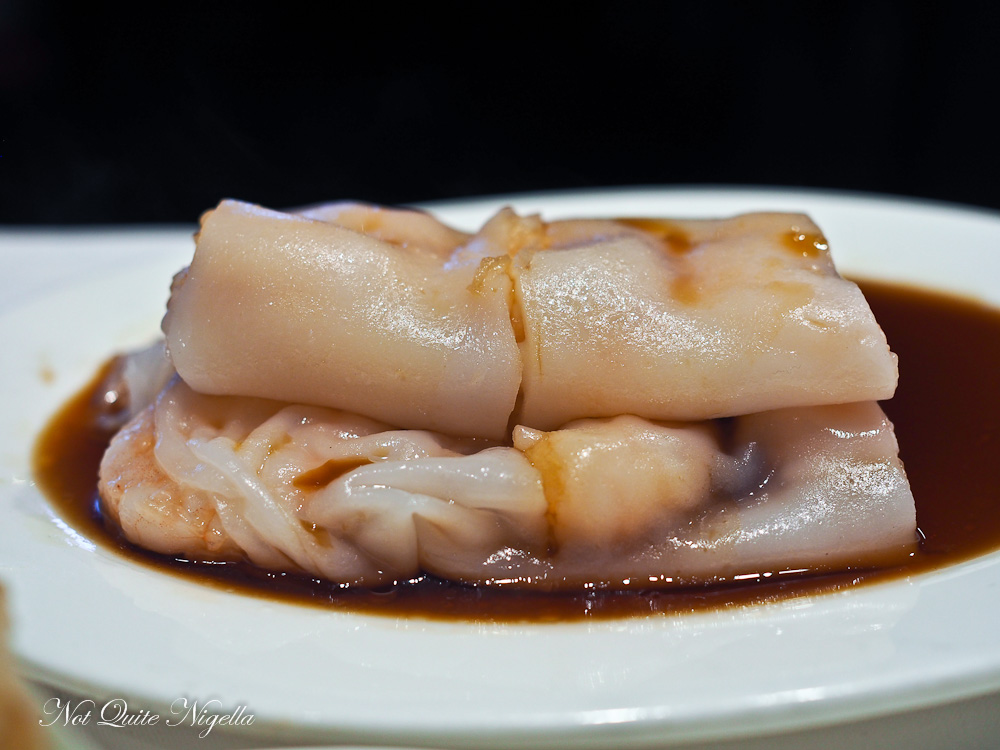 Mr NQN loves chee cheong fan. I'm usually less enthusiastic and leave most of it to him. Like one of those annoying people, I prefer my mother's version of this with char siu and a hint of hoi sin sauce. The lady that sat this down saw us taking photos and then turned the plate around to show its more photogenic side! 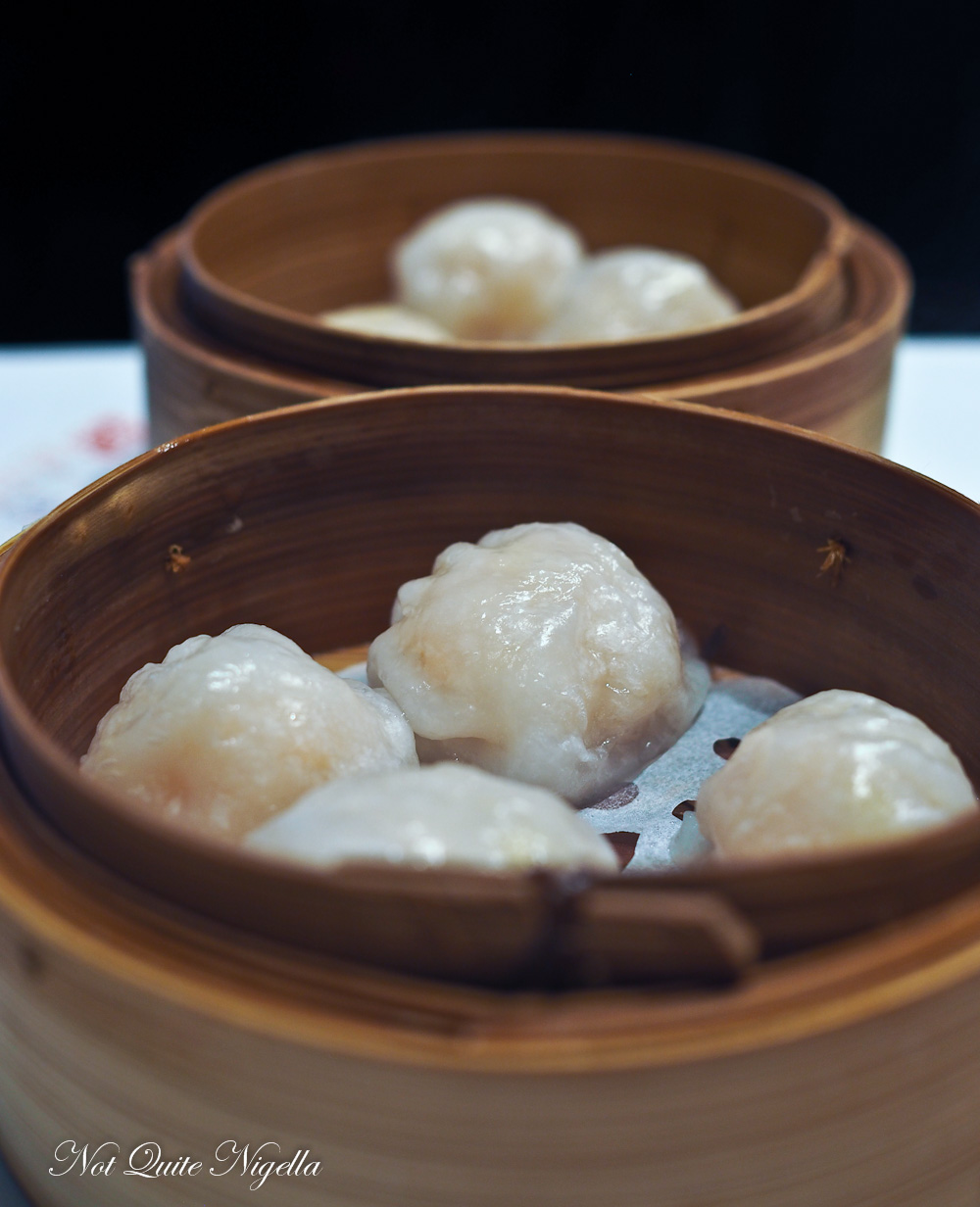 We look up and the "jelly lady" strolls past eagerly smiling. Her trolley is piled high with puddings, coconut and red bean as well as colourfully striated jelly cubes. Mr NQN's eyes are still darting around and he cranes his neck to look at every trolley for the elusive prawn dumplings. I flag down a waiter and ask him for two steamers. He appears within minutes with two steamers worth of plump prawn dumplings. After all that fuss they're fine, not the best I've had but Mr NQN seems happy and I was determined for him to get them after I had promised them. Phew! 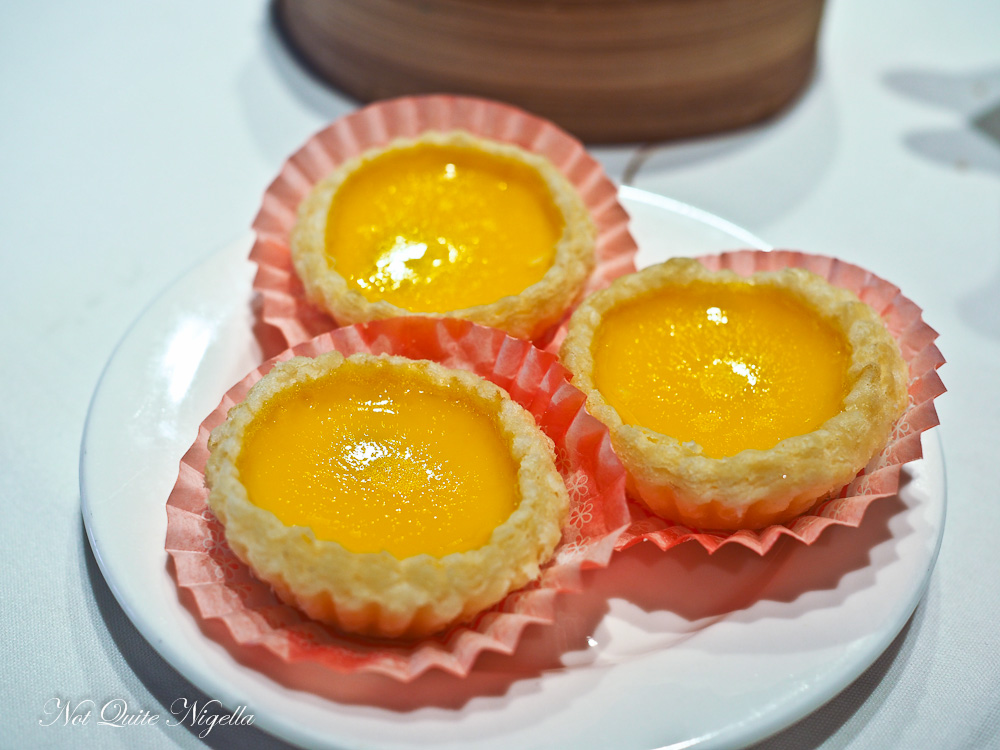 The trolley ladies here are a bit younger and less gruff than some of the other restaurants (although I'm sure its a thankless task and the gruffness comes from years of repetition). We stop the other dessert lady with buns and baked goods (not the jelly lady) and take a plate of egg custard tarts. Again these aren't bad, they're perfectly respectable. The egg custard is a little shallow but I love the layered pastry. 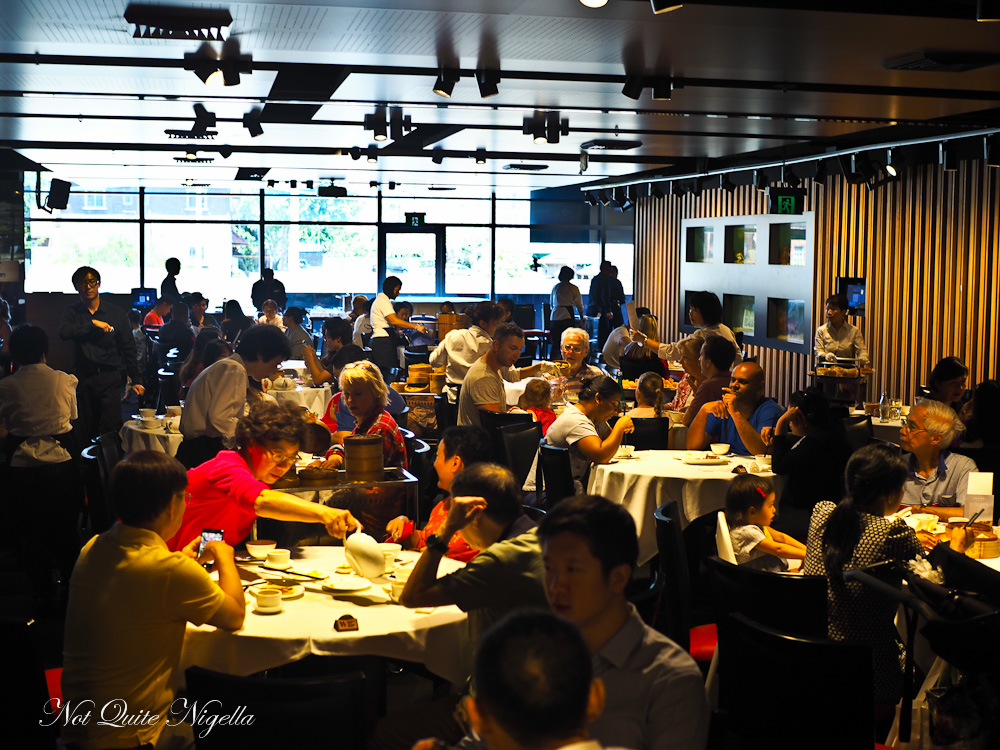 They always say that yum cha is inexpensive when you have a group and it's probably true. At $81.40 for two it's not a cheap meal out for lunch but hey when the brief is to eat quickly, we can't complain.

So tell me Dear Reader, what is your favourite yum cha item? Do you get anxious if you can't get it? And do you usually go for yum cha during the holidays? And do you think that yum cha is less expensive if you are with a larger group?