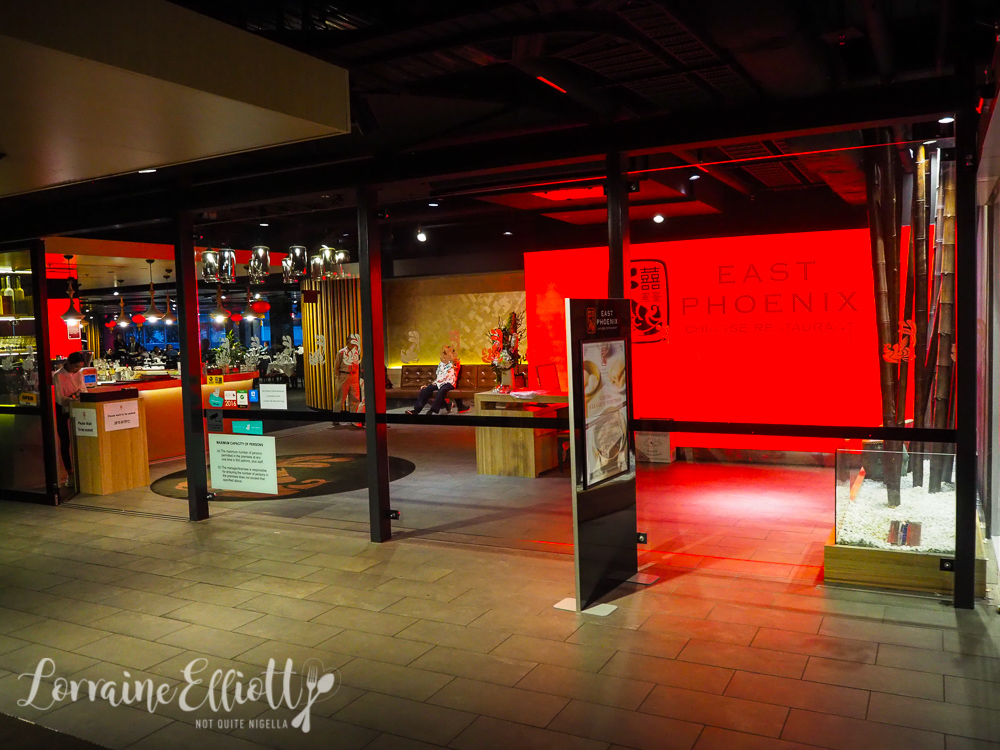 "Blythe wants to eat lamb chops at East Phoenix," came the message from my mother. My sister was flying to Singapore the next day and she's somewhat obsessed with eating lamb cutlets at the Chinese restaurant East Phoenix. 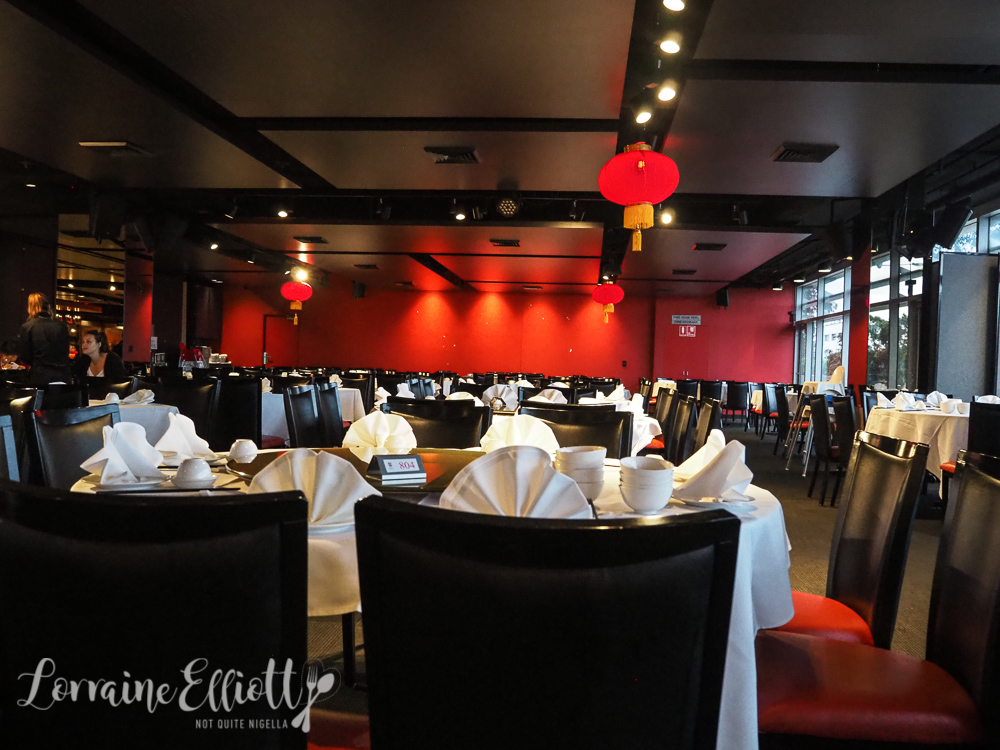 East Phoenix is quiet this Thursday evening. Gone is the bustle of a weekend yum cha with trolleys gliding down the red carpeted floors and the clinking of chopsticks on china. 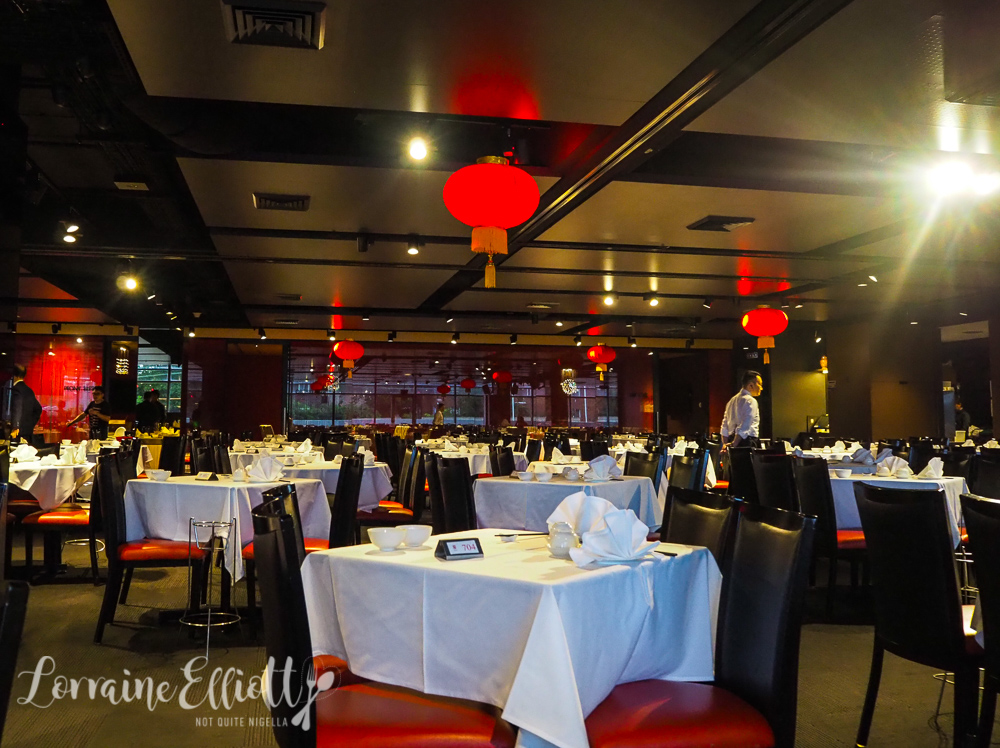 It's an enormous restaurant occupying the third floor of East Village shopping centre and there are maybe 8 tables all spread out across the restaurant for privacy. There's no starter of complimentary soup (the clientele isn't very Chinese so perhaps they've dispensed with that). We make our order and let them know that we're in a bit of a hurry because my dad can only drive home when it is bright out. 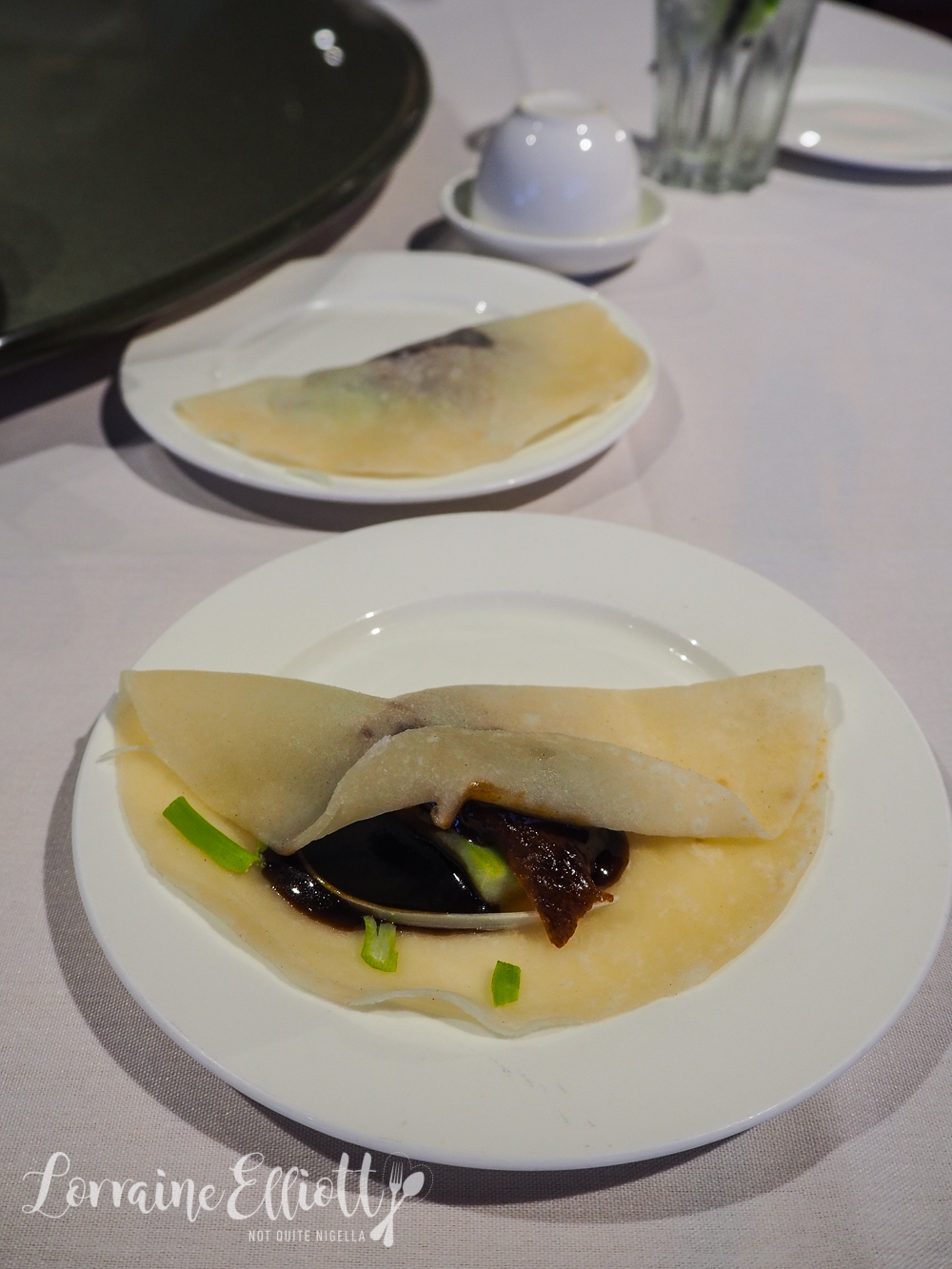 Full credit to the chefs as the food comes out very, very fast. The Peking duck can be ordered with both courses or just with the pancakes (our favourite part). Mine is mostly meat and not much skin and a lot of hoi sin sauce which isn't really how I like it. Ideally it would be all luscious, crispy skin and a bit of hoi sin along with cucumber and spring onion. 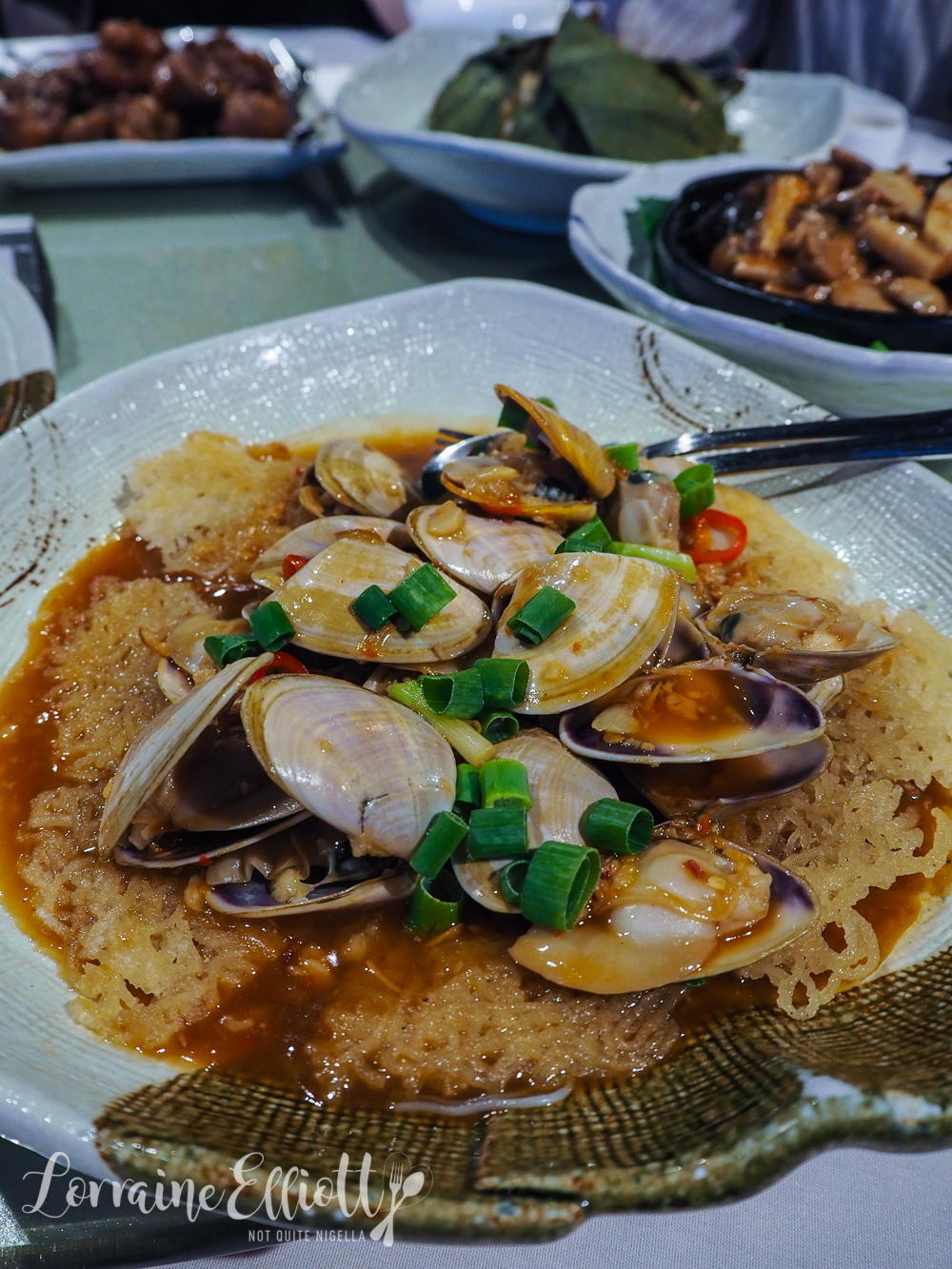 If we aren't in the mood for lobster or crab then we go for our fallback seafood item: pippies in XO sauce with vermicelli. When I ordered this our waiter tried to tell us that they don't do vermicelli so we agreed to pippies with noodles and sauce. Turns out that they do actually do pippies with crispy vermicelli after all and they're pretty damn fabulous. We only ordered 500grams/1.1lbs. of them and while it doesn't look like a lot it's plenty for us (my mother doesn't eat pippies as they cause her joints to swell). The pippies are meaty and I love the crispy pieces of vermicelli. 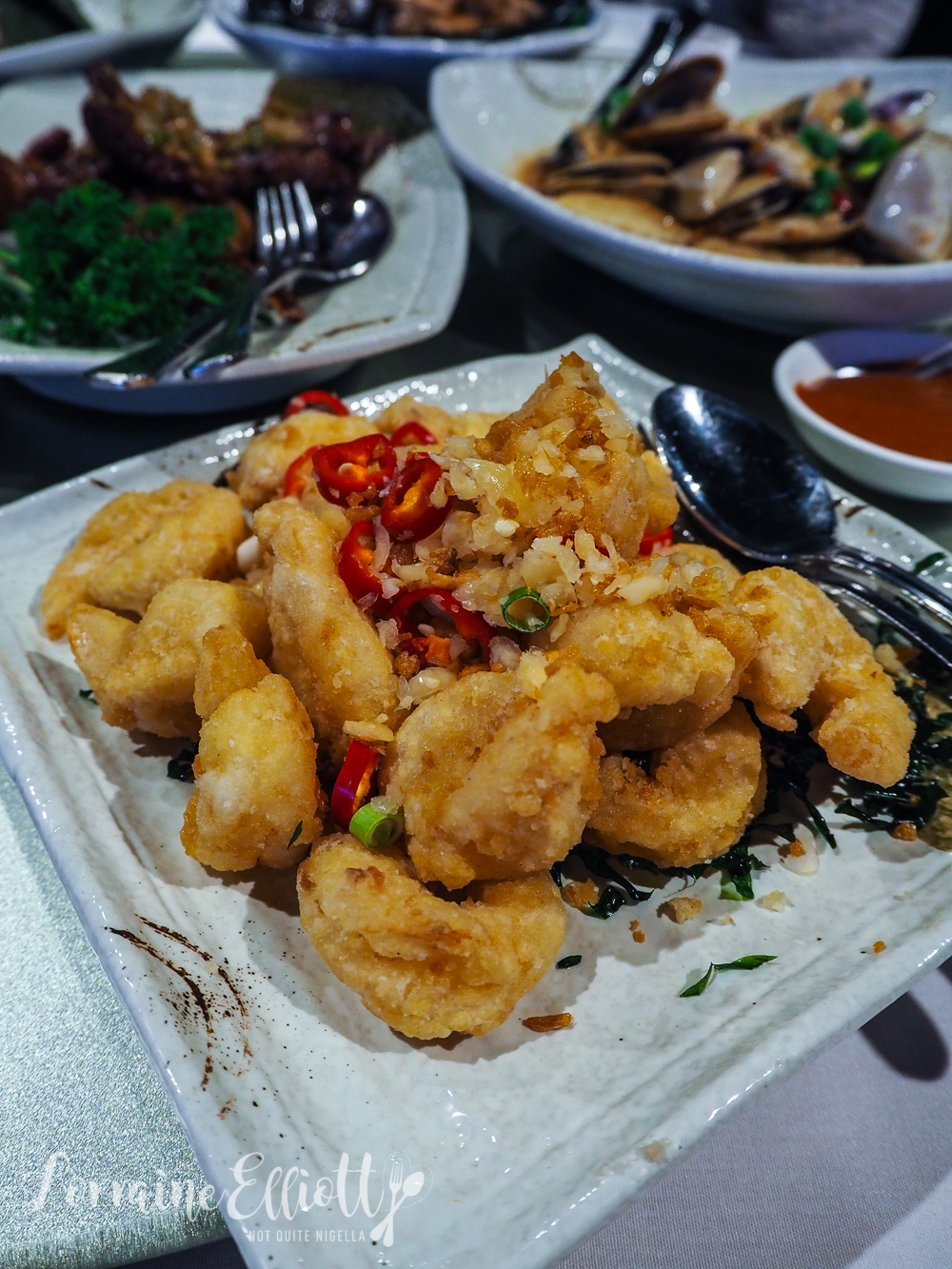 As my mother can't eat pippies she chose the prawn dish. If you've been reading my blog for a while you'll know that she loves anything deep fried and she went for the deep fried prawns with chilli and salt. The prawns are well cooked and generously portioned with a tasty, crunchy coating and just the right amount of seasoning. 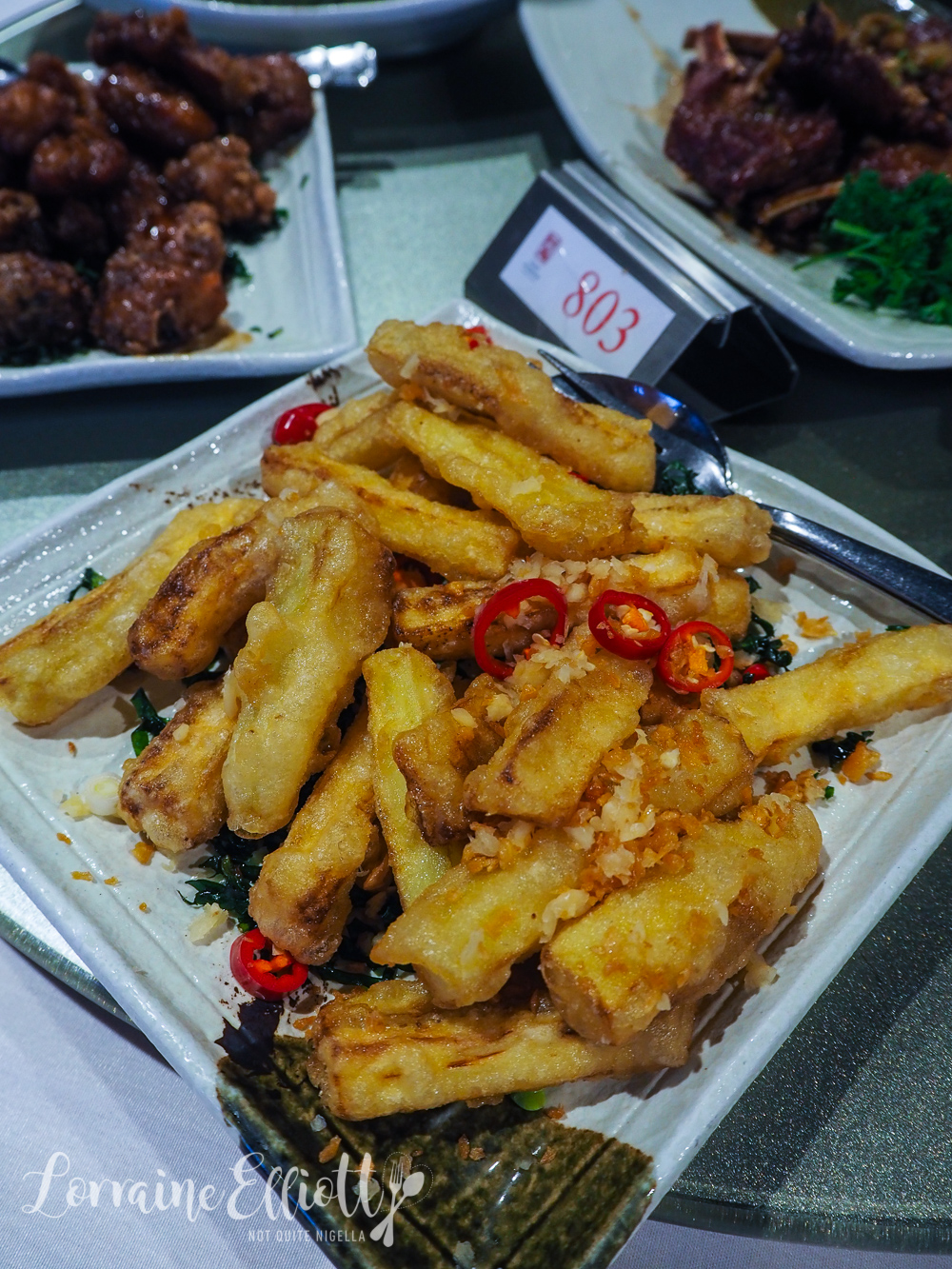 The two following vegetable dishes sort of demonstrate how different Blythe and I are. She chose the deep fried eggplant batons with salt and chilli and they're not bad but in rather desperate need of seasoning. It's a large serving too. 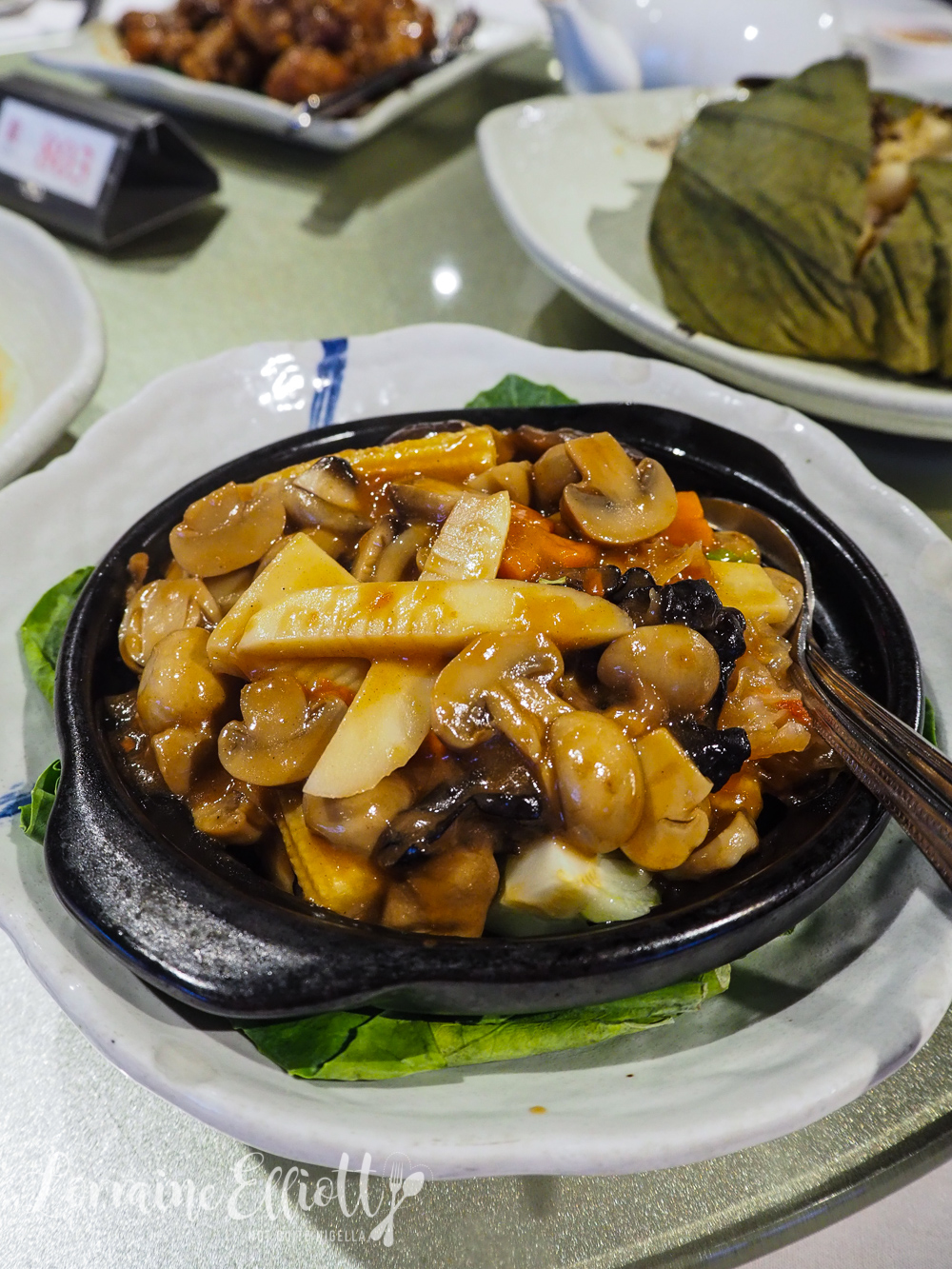 As for me, I wanted something a bit healthier and less deep fried (not that I don't love fried chicken) and went for the mixed vegetables with red tofu sauce in a hot pot. This has fermented red tofu sauce which is mild and slightly tangy and Mr NQN adores this and wolfs it down. "Anyone want any more?" he asks before finishing it. Honestly his middle name should be tofu (I'm quite surprised his mother didn't give him that middle name). 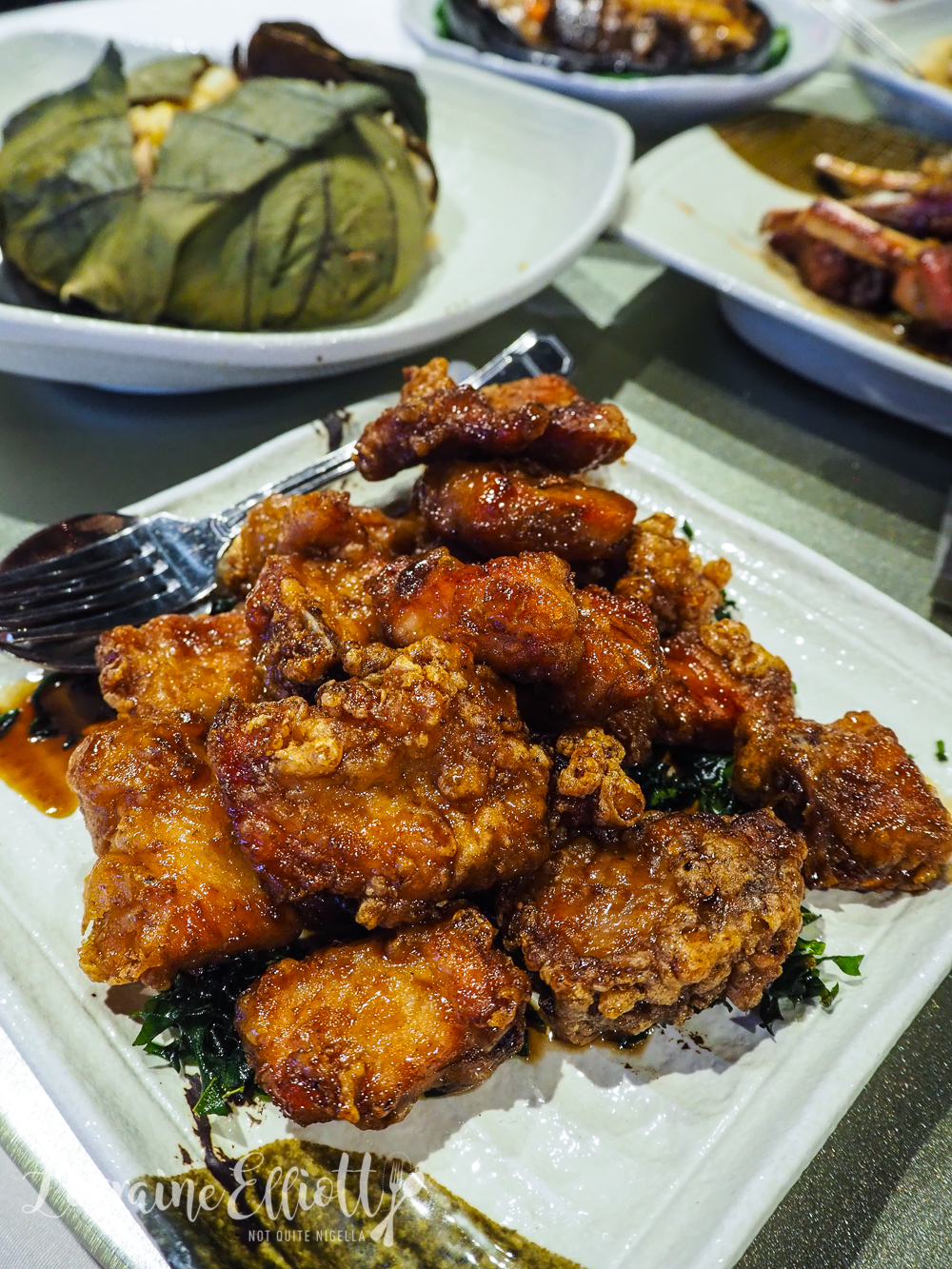 I can never get enough of pork ribs whether it be Peking style, sweet and sour or vinegar pork ribs. The vinegar sauce is sticky, sweet and slightly tangy and coats the ribs well. I think I ate about half a dozen pieces of this, sucking all the meat off the bone until my lipstick was smeared. 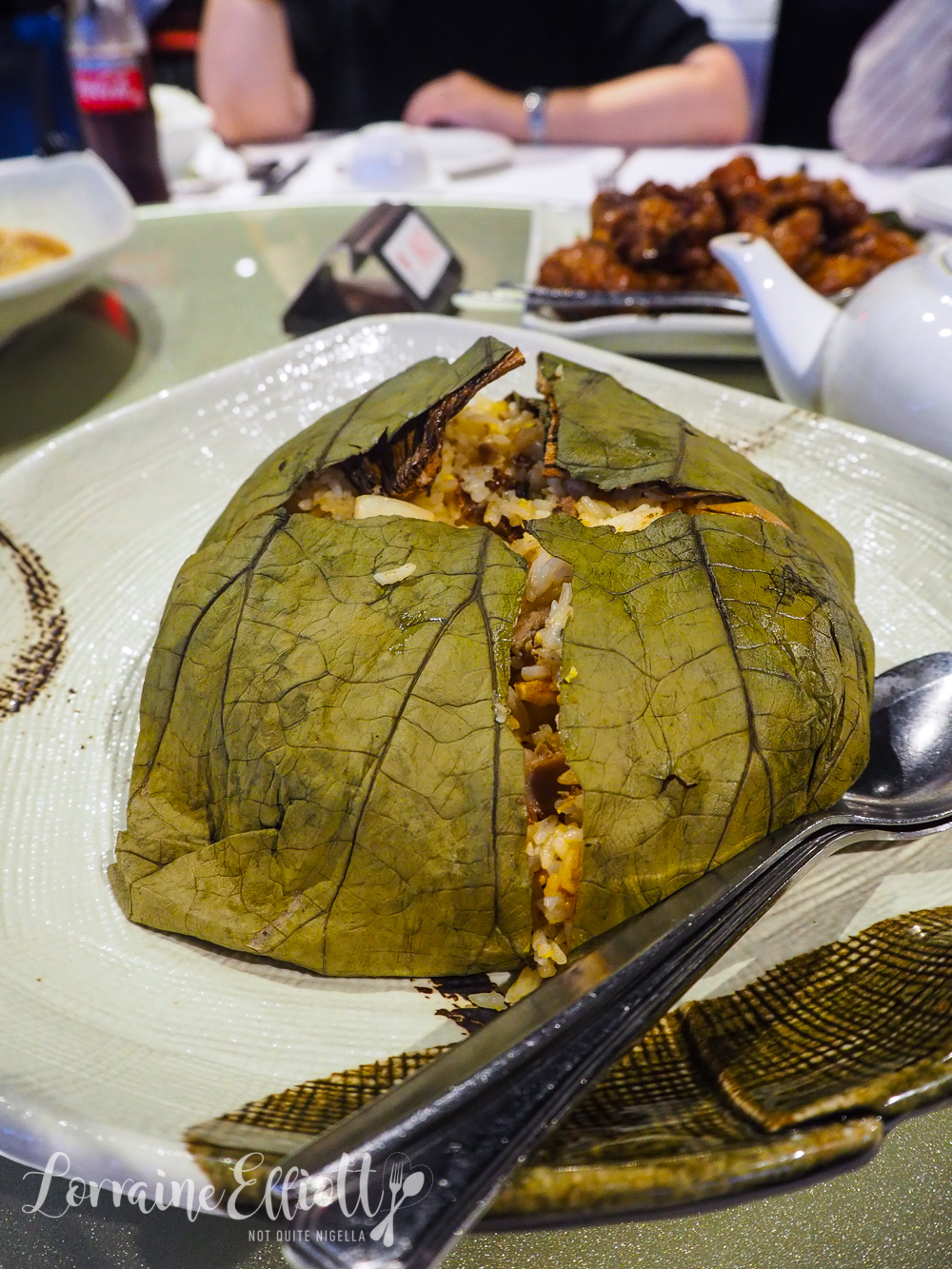 We always try and pick an interesting fried rice and this one is a really good one. Packed with lots of seafood including plenty of tiny scallops it's wrapped up in a lotus leaf that gives it bit of flavour as well as a cute presentation. 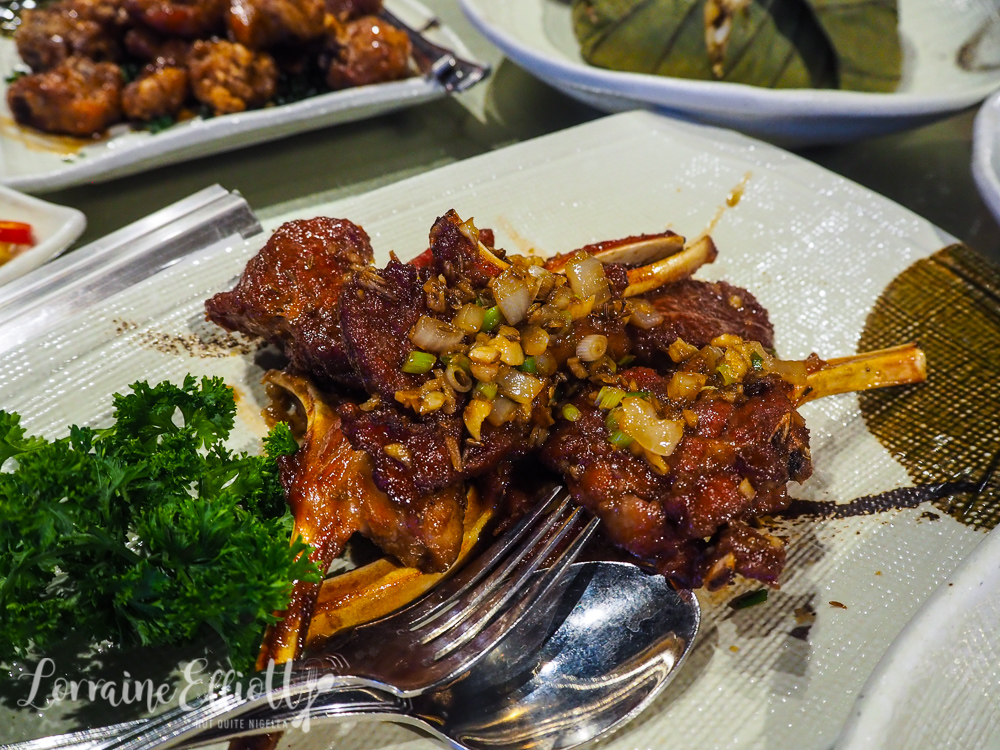 Mr NQN and I split one of the lamb chops. There were six to a serve but I know how much Blythe loves them. They're fried and coated in plenty of garlic and cumin. They're juicy and meaty, not as neatly trimmed as Western style lamb cutlets but that just means more juicy meat really. Blythe wants more cumin on these but I don't love cumin as much as it always smells like sweaty men to me. 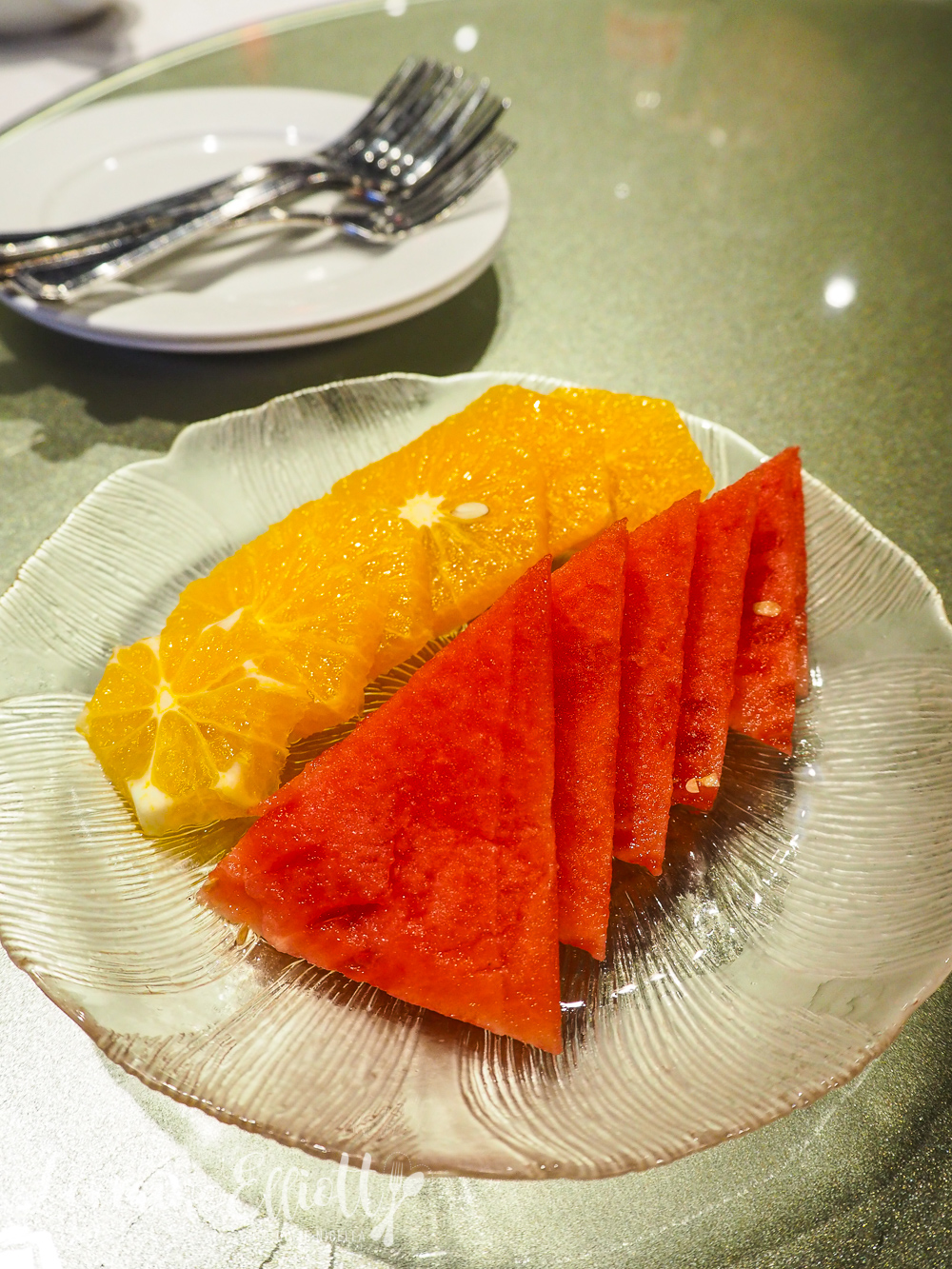 There's no sweet soup at the end (again I think this is an item more for Chinese clientele). They serve us some complimentary orange and watermelon, both lacking a bit in vigour and sweetness.

So tell me Dear Reader, do you like meat or skin in your Peking duck pancake? Do you like cumin? Does it smells like sweaty men or body odour to you (or is that just me?).