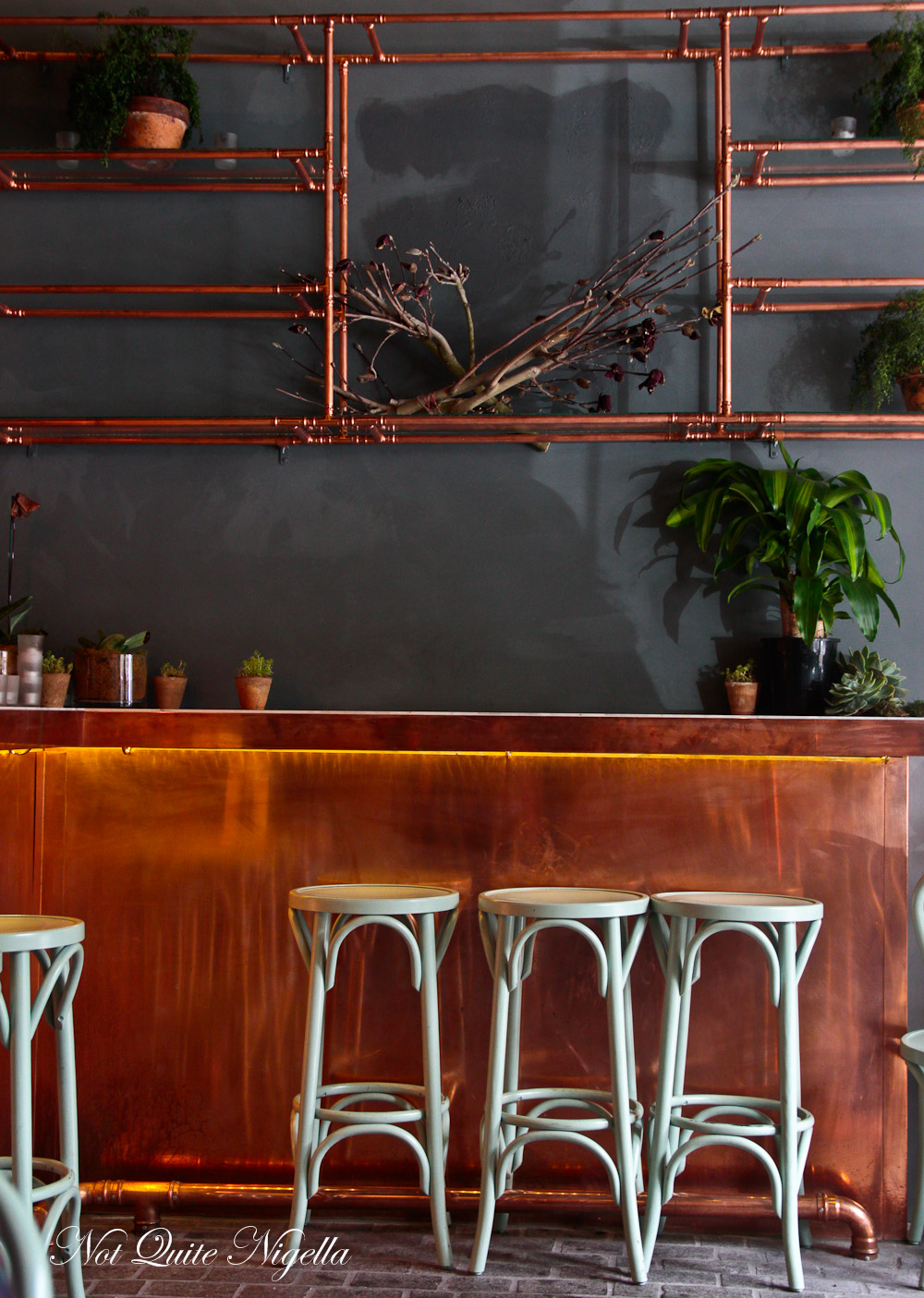 The man whom I was talking to freezes and a look of fear crosses his face. I have just asked him whether the dumplings that we'd eaten were fresh or frozen. "Definitely never frozen, Lucy would never let us do that" he said in no uncertain terms. The Lucy in question is "dumpling queen" Lucy Luo who stands behind the glass rhythmically shaping dumplings by hand. 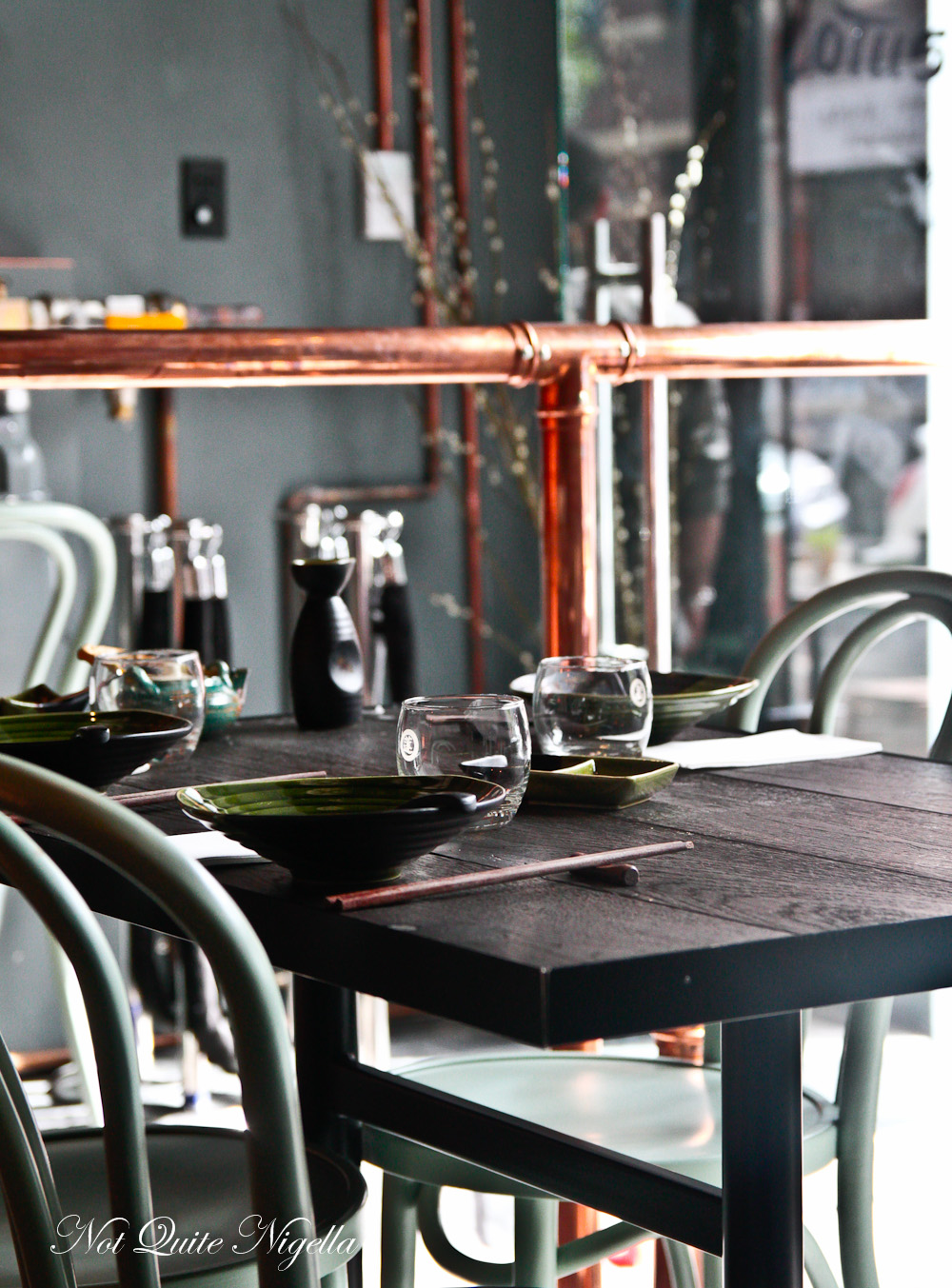 We're at Lotus Dumpling Bar on Hickson Street in Dawes Point. It's an area with increasingly more choices for the pre and post theatre crowd. Dumplings, as the name suggests are the specialty although there are also entrees and main courses from chef Neo Ni from Mr Wong. 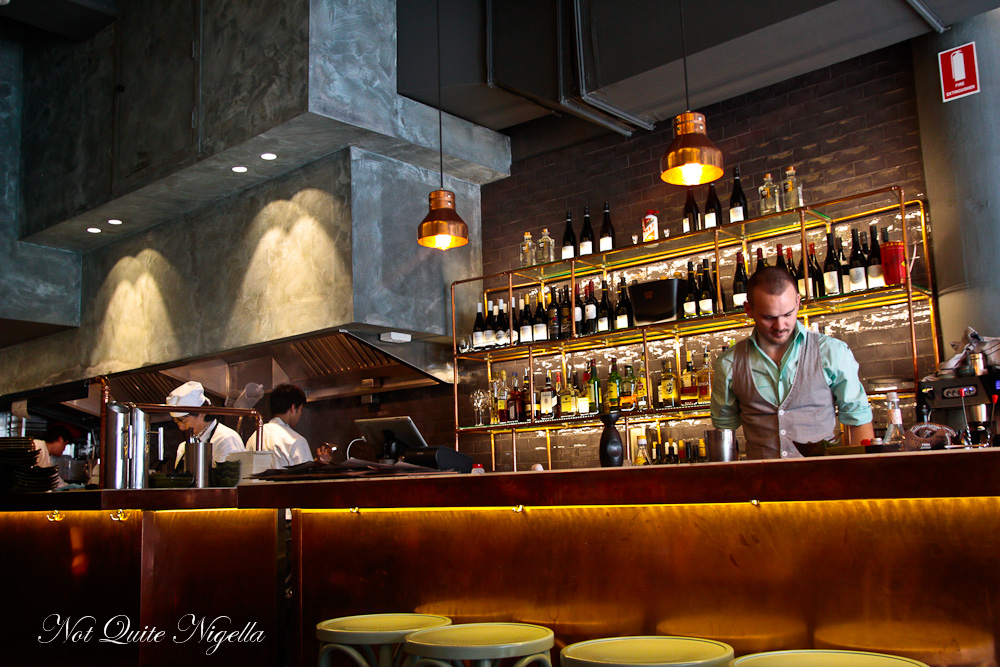 The most eye catching shade in the small room is a pale jade which goes well with the warmth of the rich copper fixtures. And even though we are dining at 12:30pm they're already out of two items: the bbq pork puffs and the Lotus xiao long bao (curiously, said to be made with 100% fruit and vegetable juice). 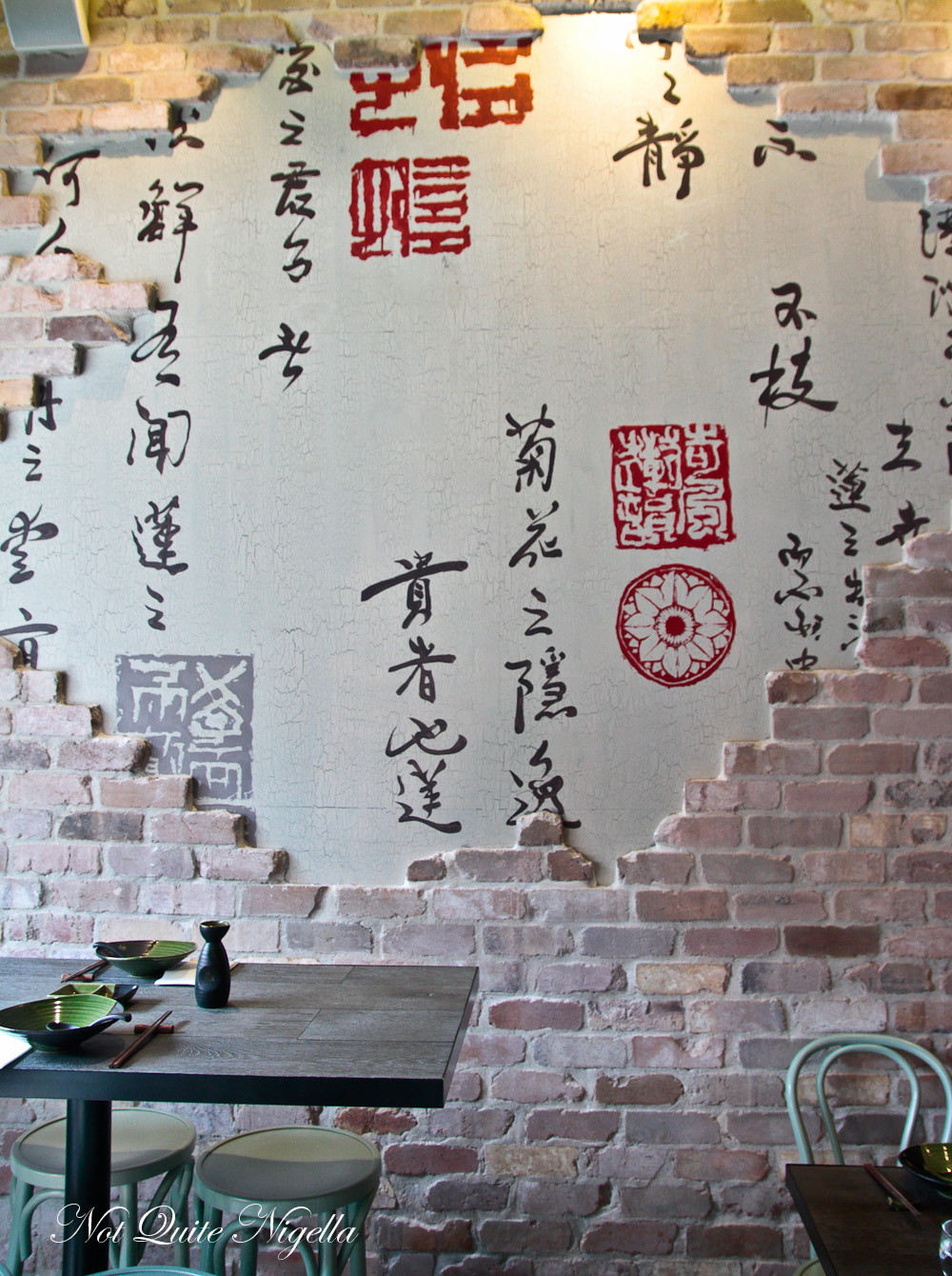 We take the recommendations from staff and sit back and relax drinking in the sunshine. They offer us tap water or sparkling and it's always nice to have an option offered without having to ask. My parents try and read the Chinese handwriting and stamps on the wall while we wait. It's not long before our dumplings hit the table. Also offered are Chinese vinegar house in a teapot, soy sauce in a sake cup and chilli and sesame oil in a bowl. 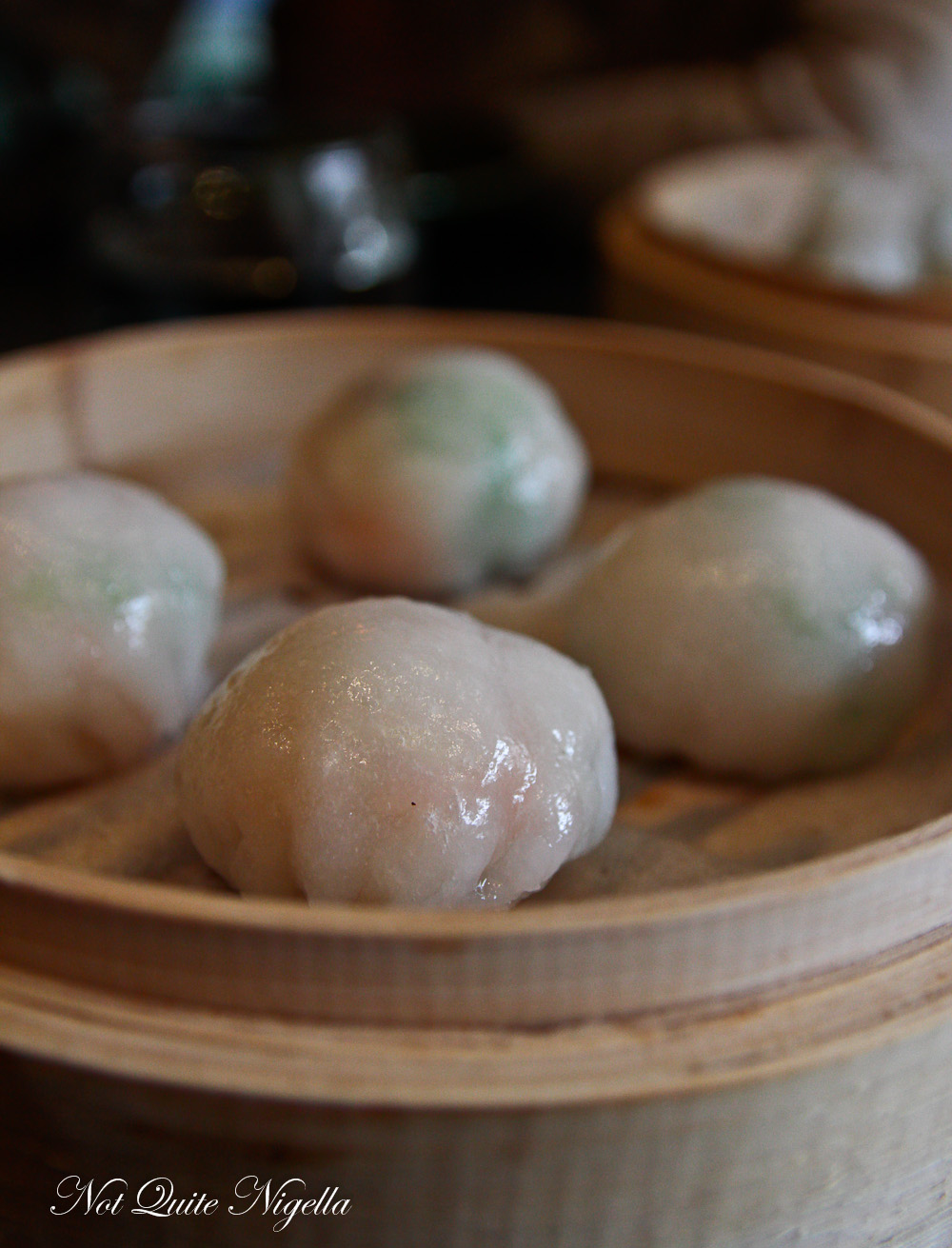 The first item is a scallop and prawn dumpling, filled to the brim with tender seafood, mushroom and snow peas. It's full of flavour, sticky and delicate. Mr NQN has no success bringing this to his mouth without it falling apart. 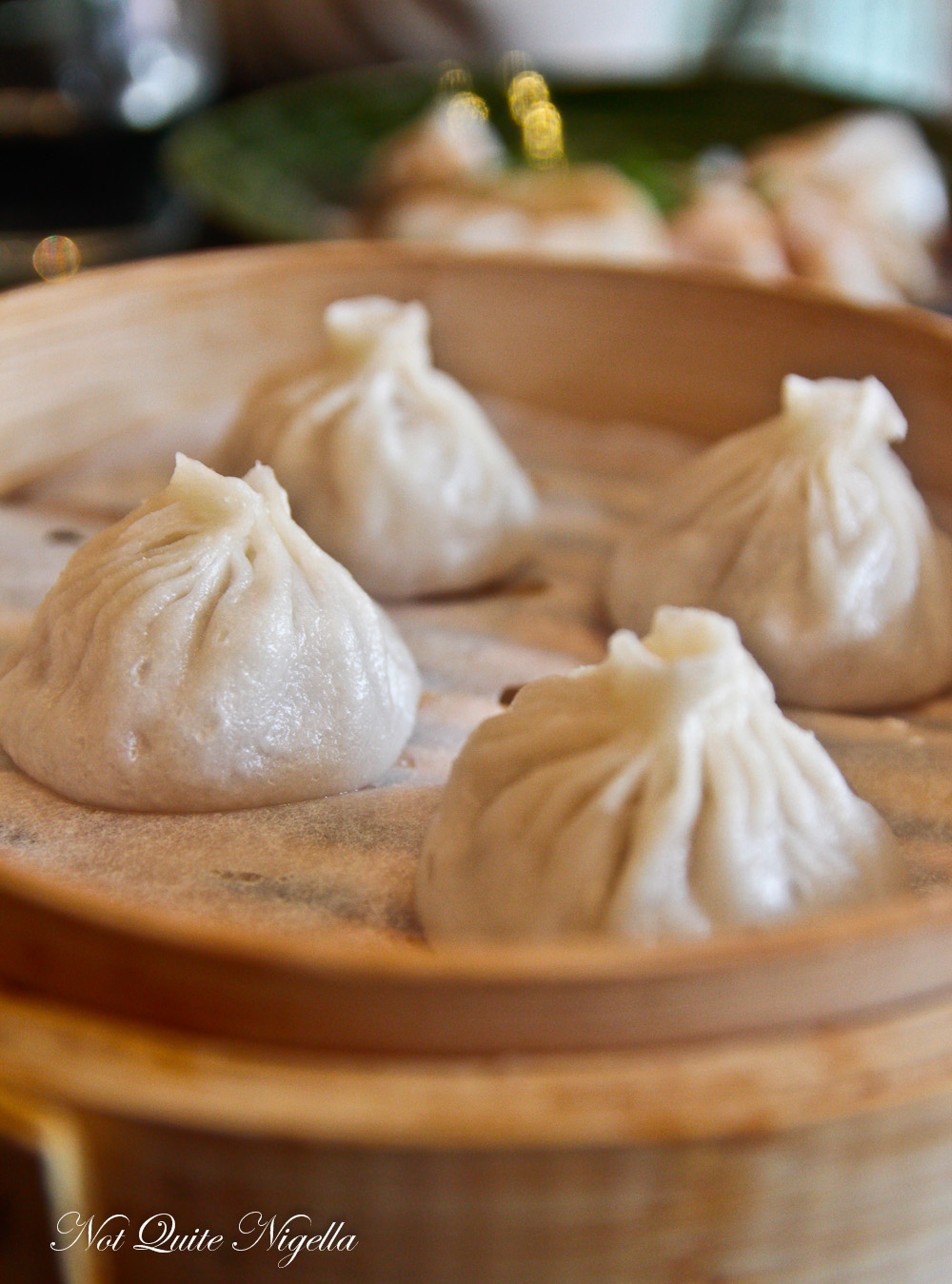 While the Lotus Xiao Long Bao or XLB were out, the regular chicken or pork XLB were in stock. These are very plump and full of a lot of juice. The skin isn't quite as smooth as say that at Din Tai Fung but it's still a good version. 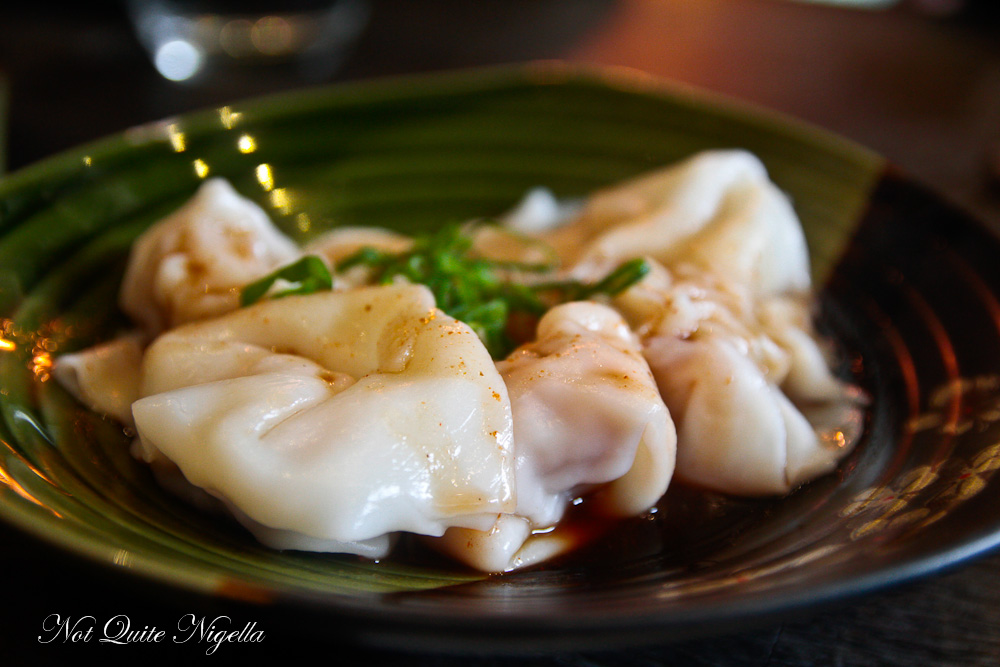 Ever since having the pork wontons in chilli sauce at Hutong in Melbourne, I've tried to find them here to no avail. These are good wontons but the spicy sauce isn't very spicy at all. In fact it is sweet above everything else. I dunk them in the chilli oil. 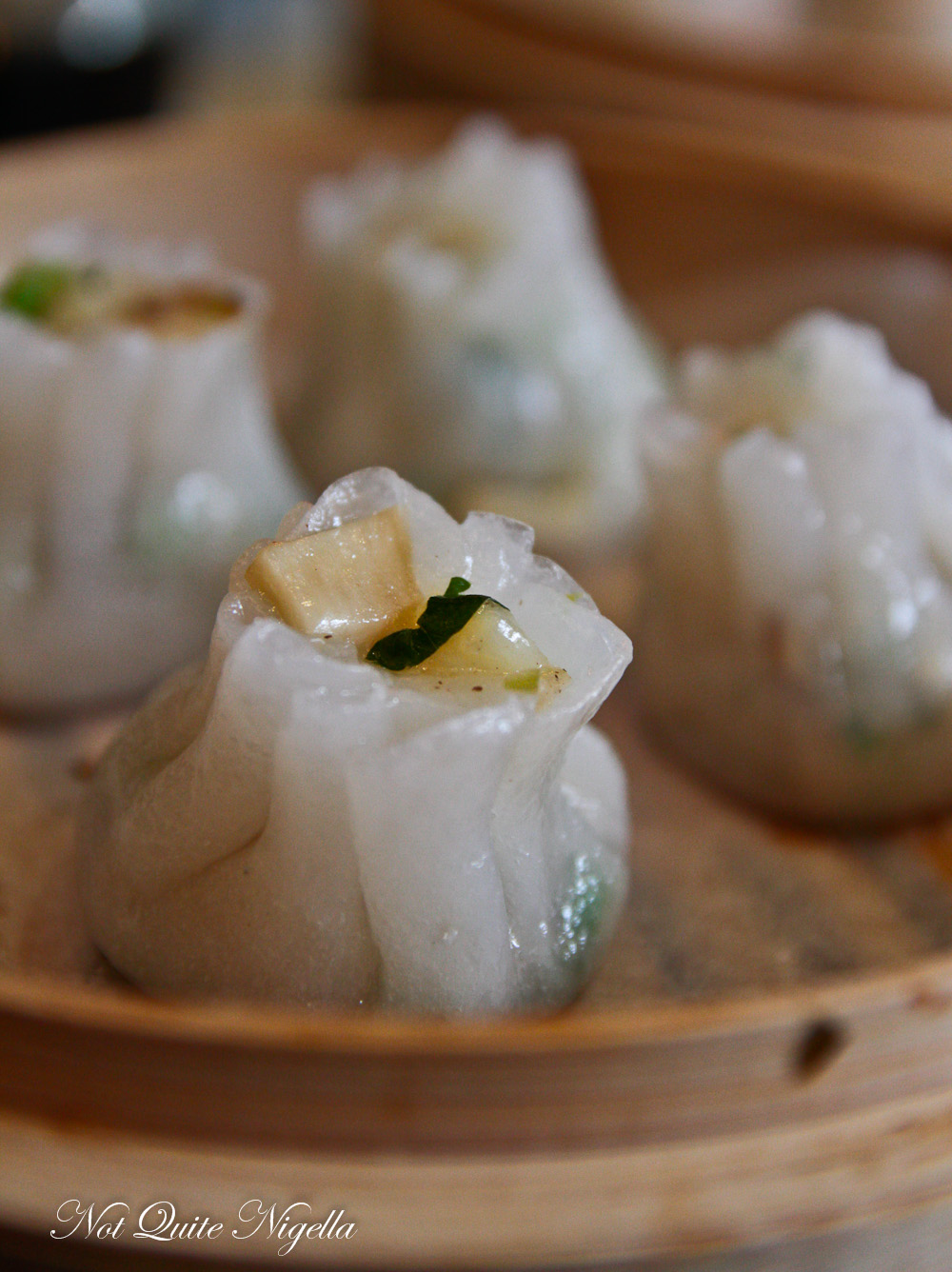 I was expecting an egg pastry because it was a shumai but this comes in the crystal pastry which is a nice idea. It's less filled than the other dumplings, mainly because of its shape but the filling has a good flavour to it. 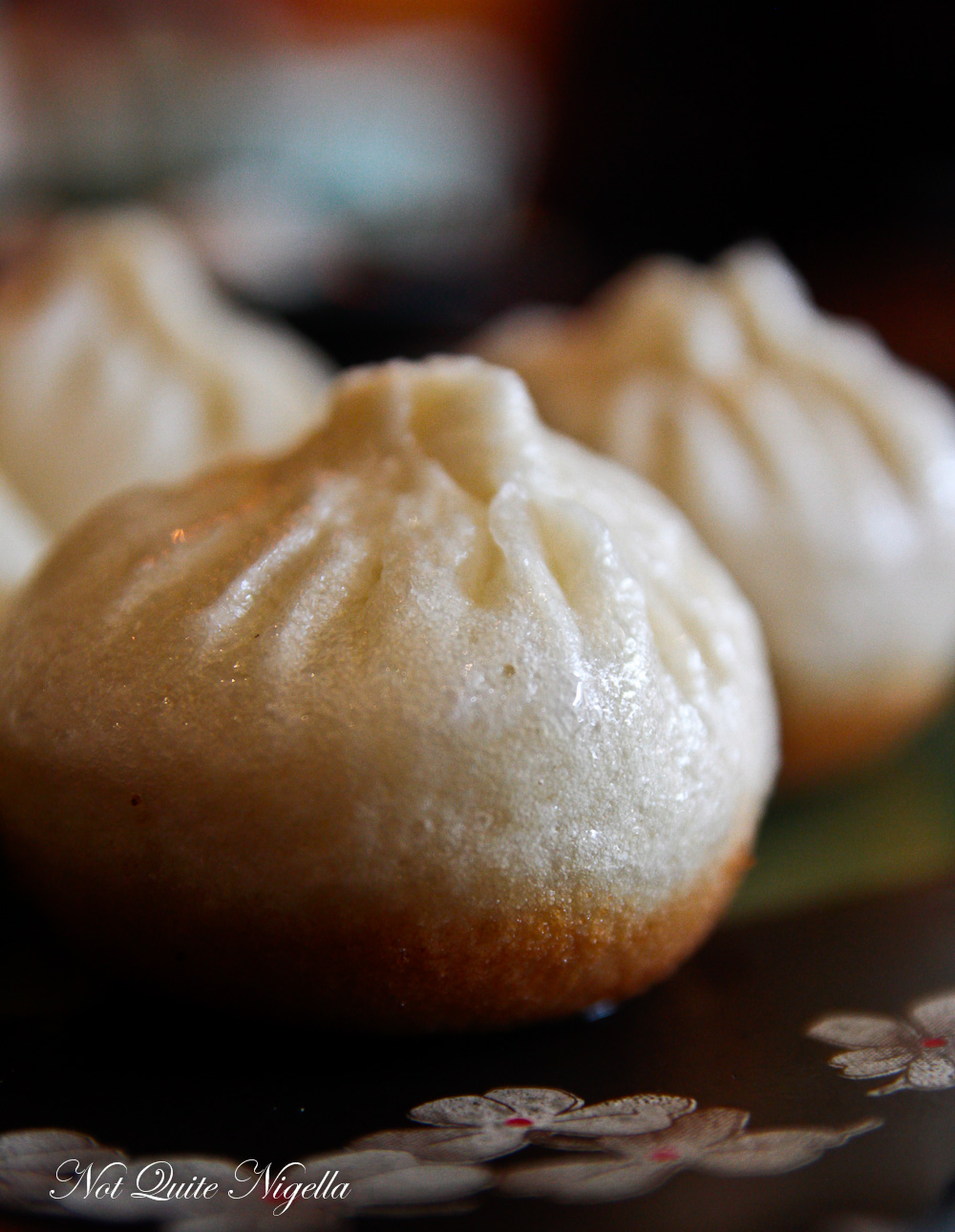 I have to admit that I was really quite smitten by these. The bottoms are so crispy and the filling full of hot soup and pork mince that I wished we had another serve. Of course if you eat at Ashfield, you'd get double the amount for the same price but we stop ourselves from ordering another one. 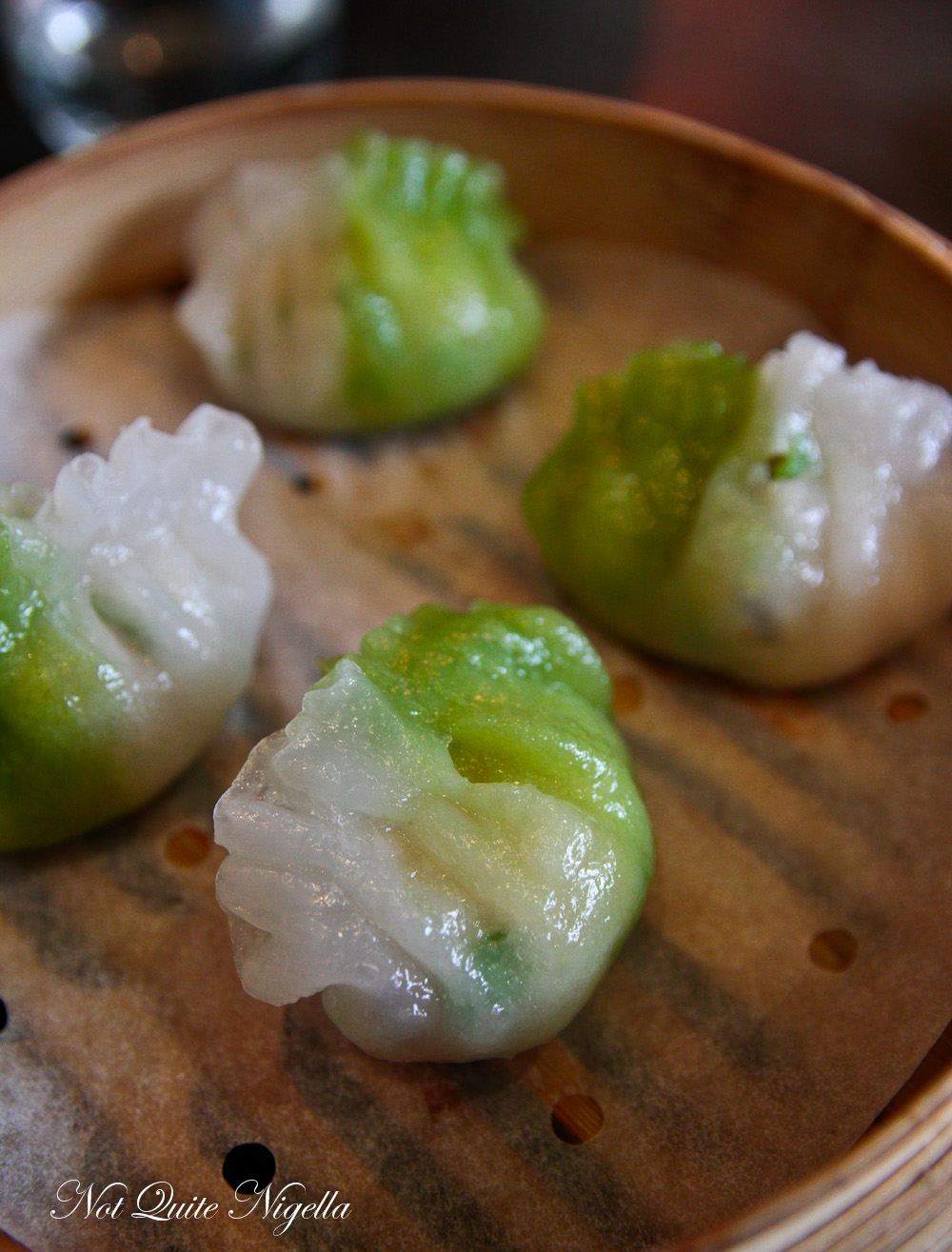 Our last dumplings are the translucent green and white parcels filled with big pieces of prawn, mushroom and snowpeas with the snowpea flavour dominating. 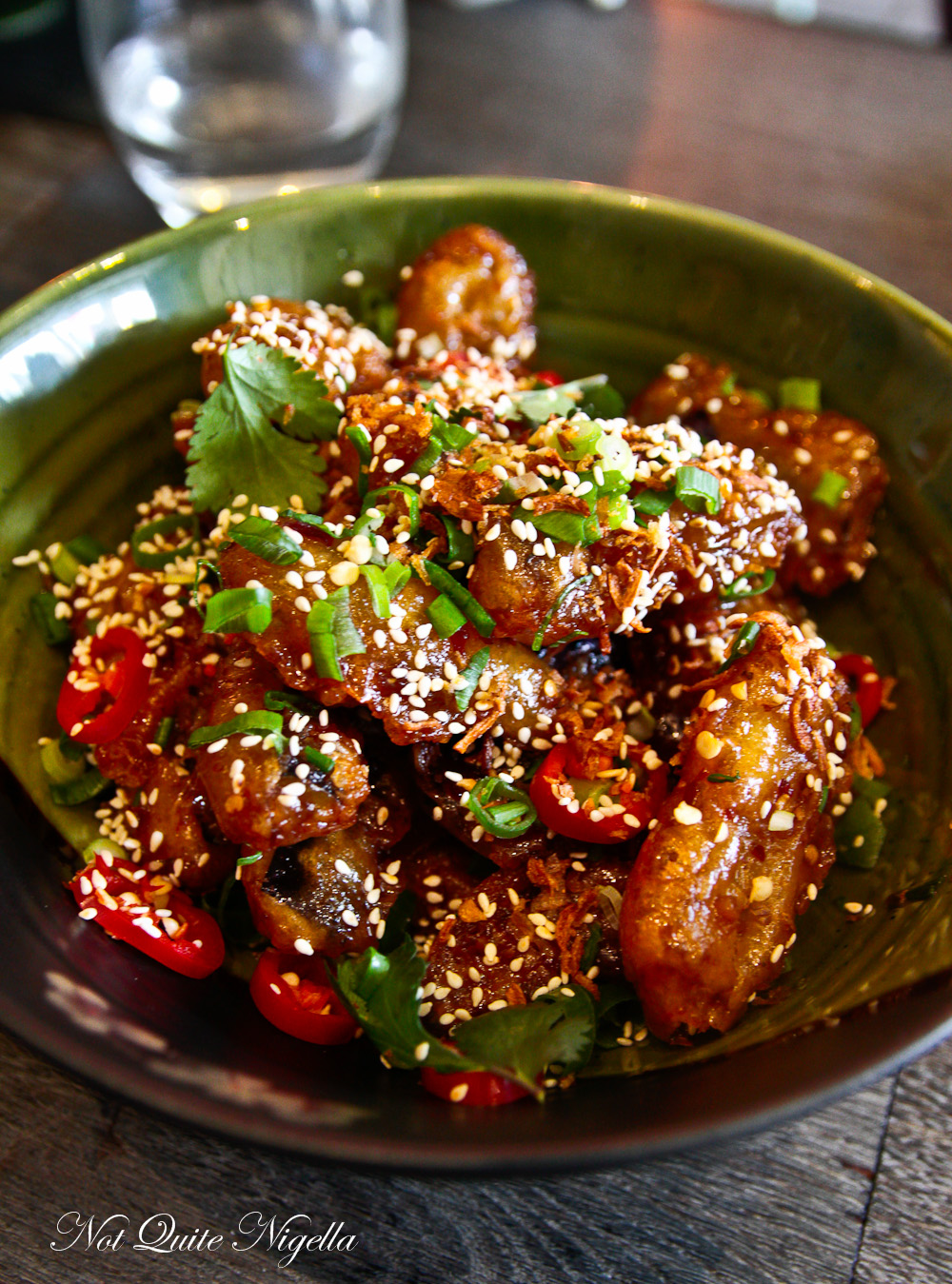 Crispy eggplant with honey and chilli $16.00

Alas, it was clear that they had forgotten about this item that we'd ordered. We waited and waited before someone asked us if we'd like to order something else. We mentioned the eggplant and it was quickly added to the kitchen's list and we waited for it to be cooked. It was worth the wait with the battered batons of eggplant sheathed in a crispy golden batter. The accompanying sauce was sweet with honey, chilli, sesame seed, coriander and spring onion. Mr NQN found them a bit too oily and they were (when I took a bite, oil does trickle out) but it's one of those things, your mind says no but your mouth says yes.

Dessert is simple: a selection of Messina gelato in three Asian food friendly flavours but alas no sweet dumplings.

So tell me Dear Reader, do you order dessert at Asian restaurants? And can you taste the difference between fresh and frozen dumplings? 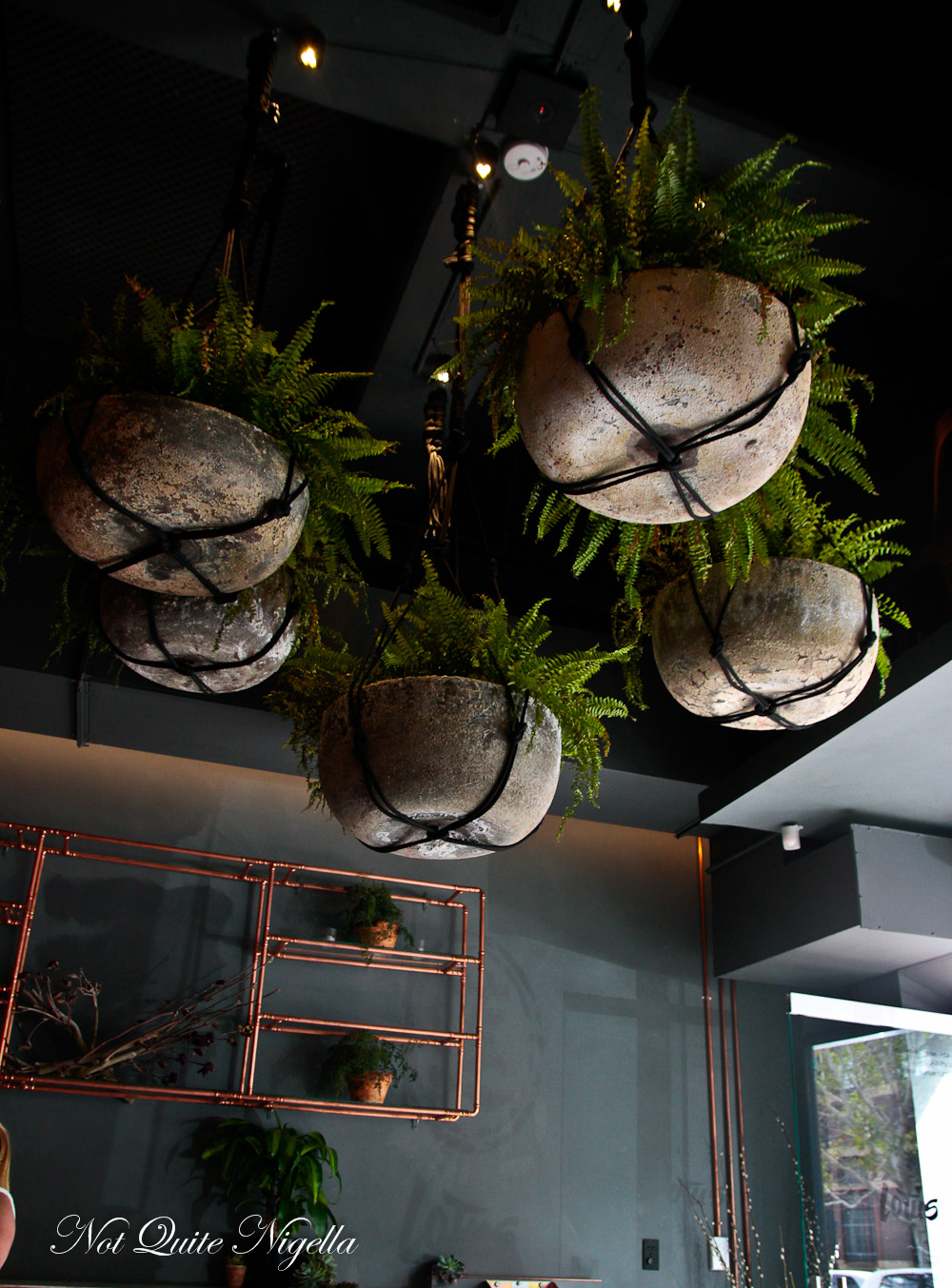