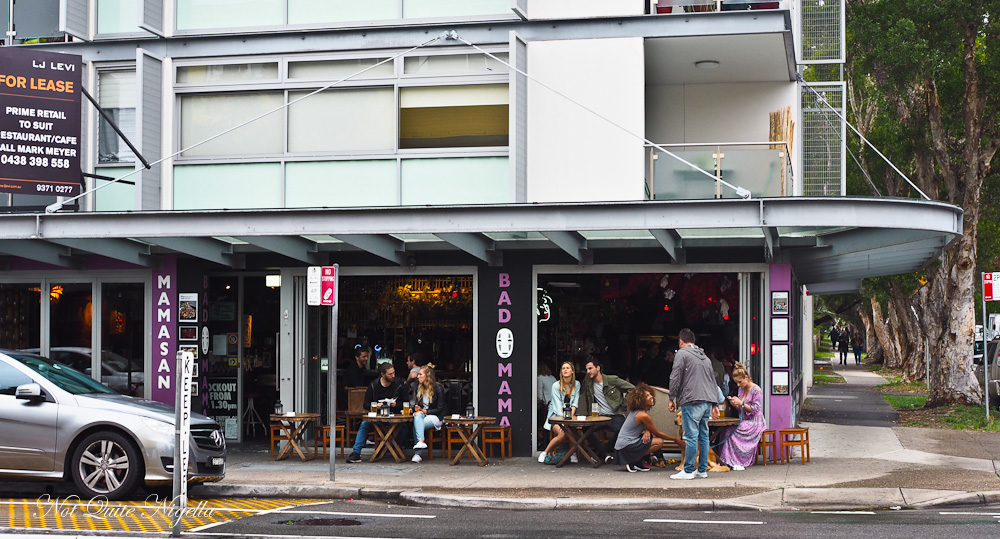 Wanting to make the most of the summer holidays? One of the most popular spots during summer is Bondi Beach where there are no shortage of restaurants. Mamasan on Beach Road features items like a Honey Boo Boo cocktail, scampi sushi, fish finger dumplings. Then chase this with a drive across town to Marrickville to try out new gelateria, Gelato Franco!

Sometimes I feel a bit too weird for Bondi Beach. Like say tonight when I walked down the street with my dark lipstick called Vampira, people stared as though I was a goth that had landed in their sunny shores. These people with sea spray in their tousled hair, freckles on their cheeks and flowing dresses...their eyes lingered, slight confusion in their eyes. I'm sure they were thinking "Hey lady, did you get lost?". Or it's quite likely that maybe they didn't care. I don't know. 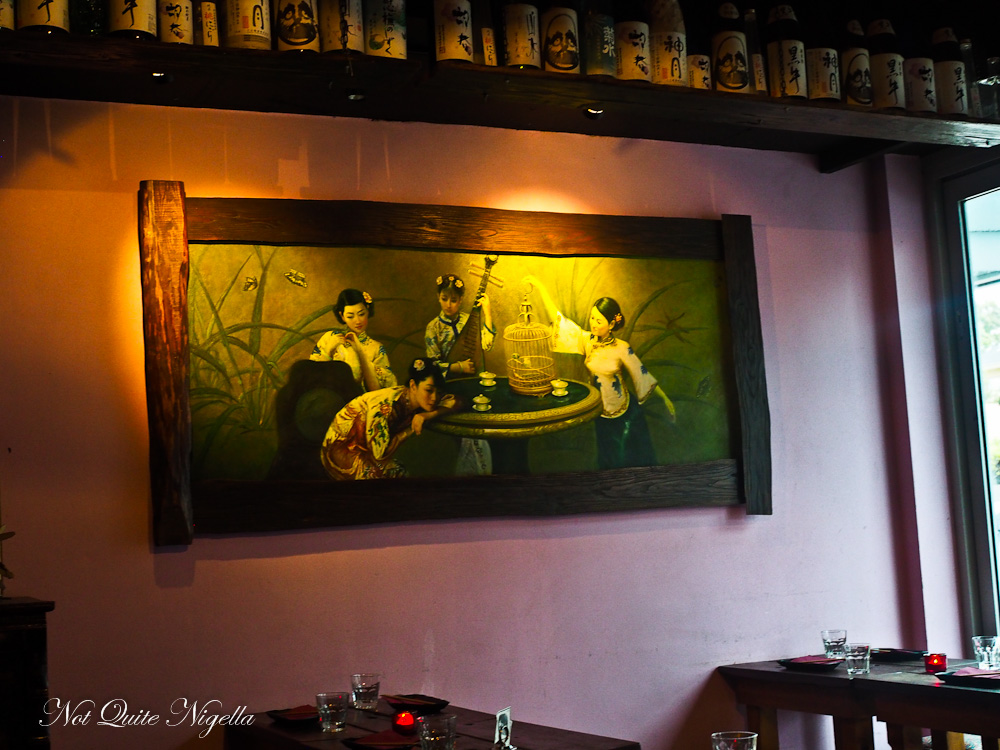 It's lucky that it is dark in Mamasan, a pan-Asian eatery located on Beach Road in Bondi. It's located next to their bar Big Mama which is busy with patrons this evening. In the centre are the "Opium Dens" or private rooms which aren't really private, they're more in the centre of the bar. And this Saturday night it's Mr NQN, Louise, Viggo and me. Service is friendly enough, one is very nice while one waitress just cannot understand a word we are saying and implores us to talk to someone else. 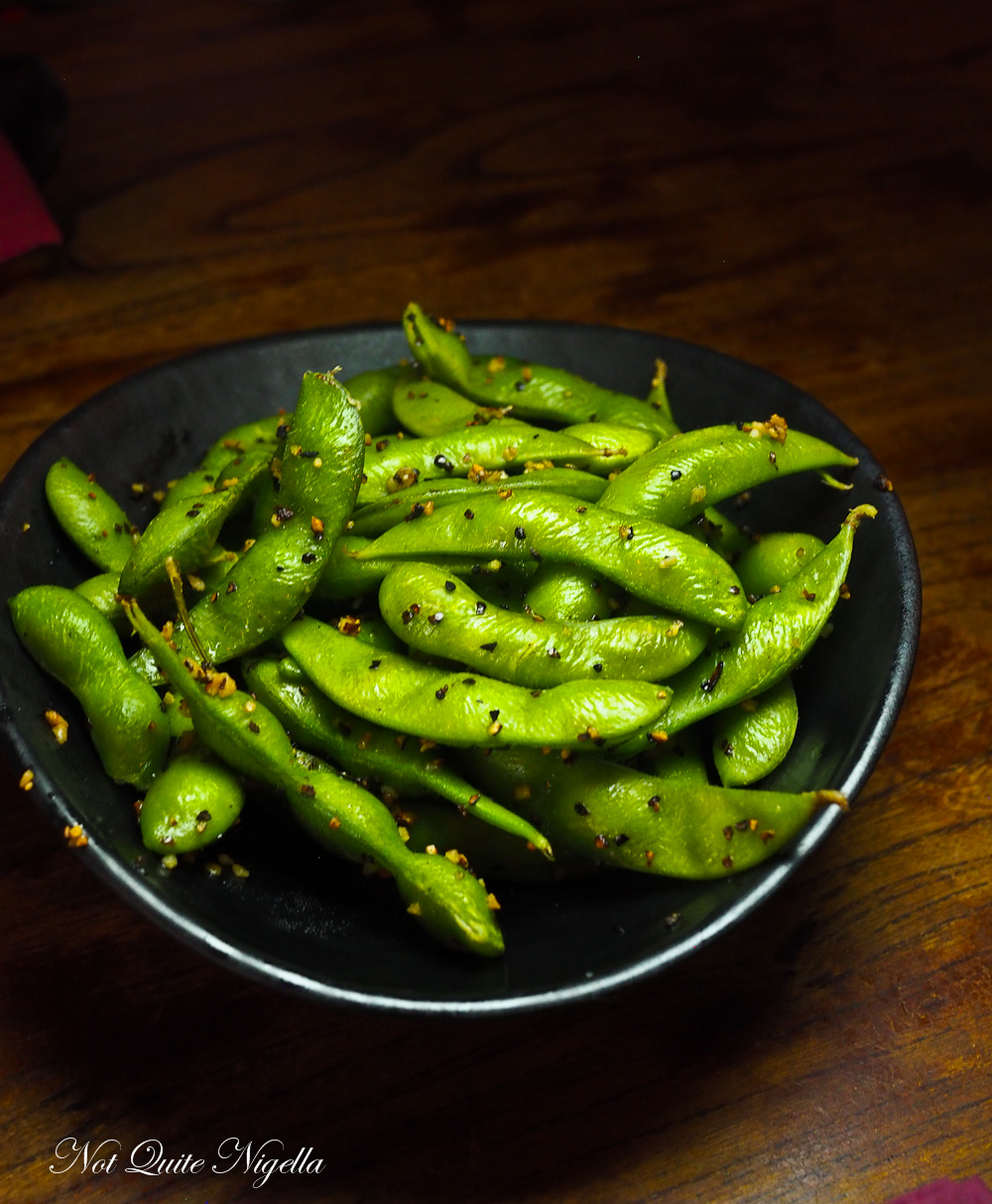 Louise and Viggo arrived early so they ordered a serve of edamame. I am not usually an edamame fan but these black pepper and garlic edamame are absolutely addictive. I couldn't help but go back to this basket time and time again. We nibble on these while deciding on what we want to order. 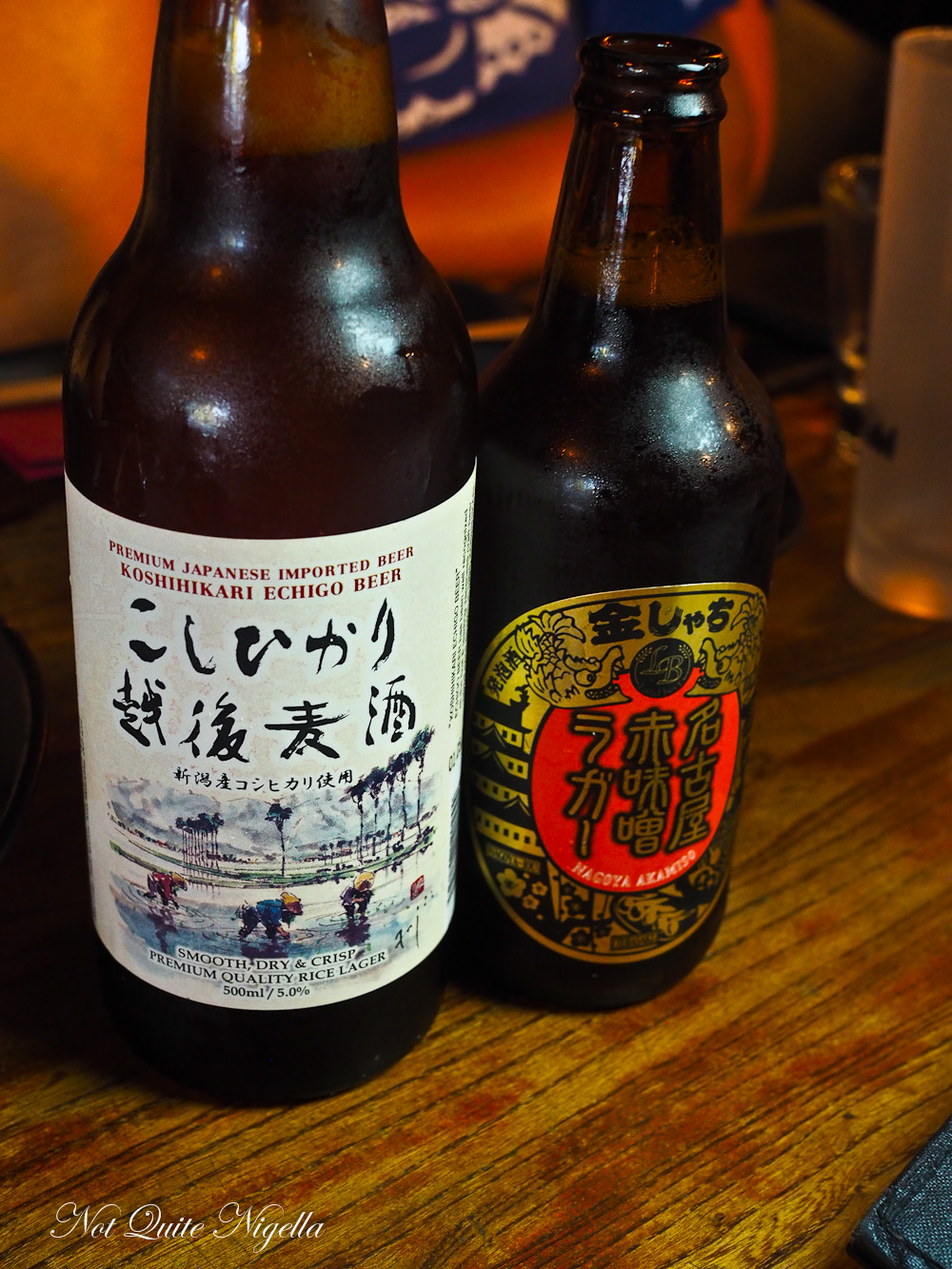 Beers are not inexpensive, in fact they're the price of cocktails at $16 each. Viggo tries a red miso beer while Mr NQN has the Echigo Rice beer. The miso beer is very interesting with a pronounced saltiness to it. 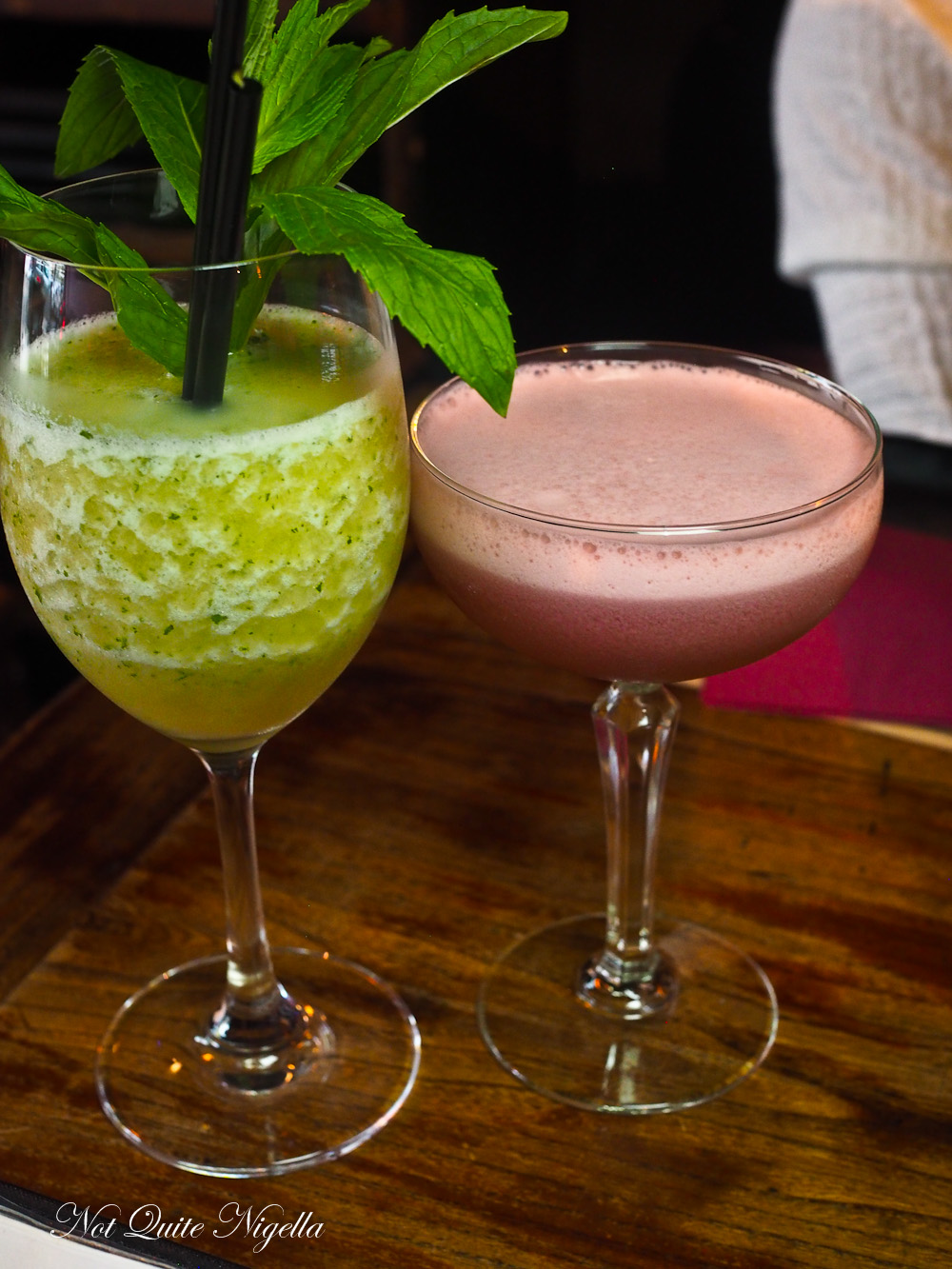 The Honey Boo Boo is like a strawberry cocktail for dessert with a slight medicinal quality while the Jade Margarita packs an alcoholic punch-it is very strong indeed. 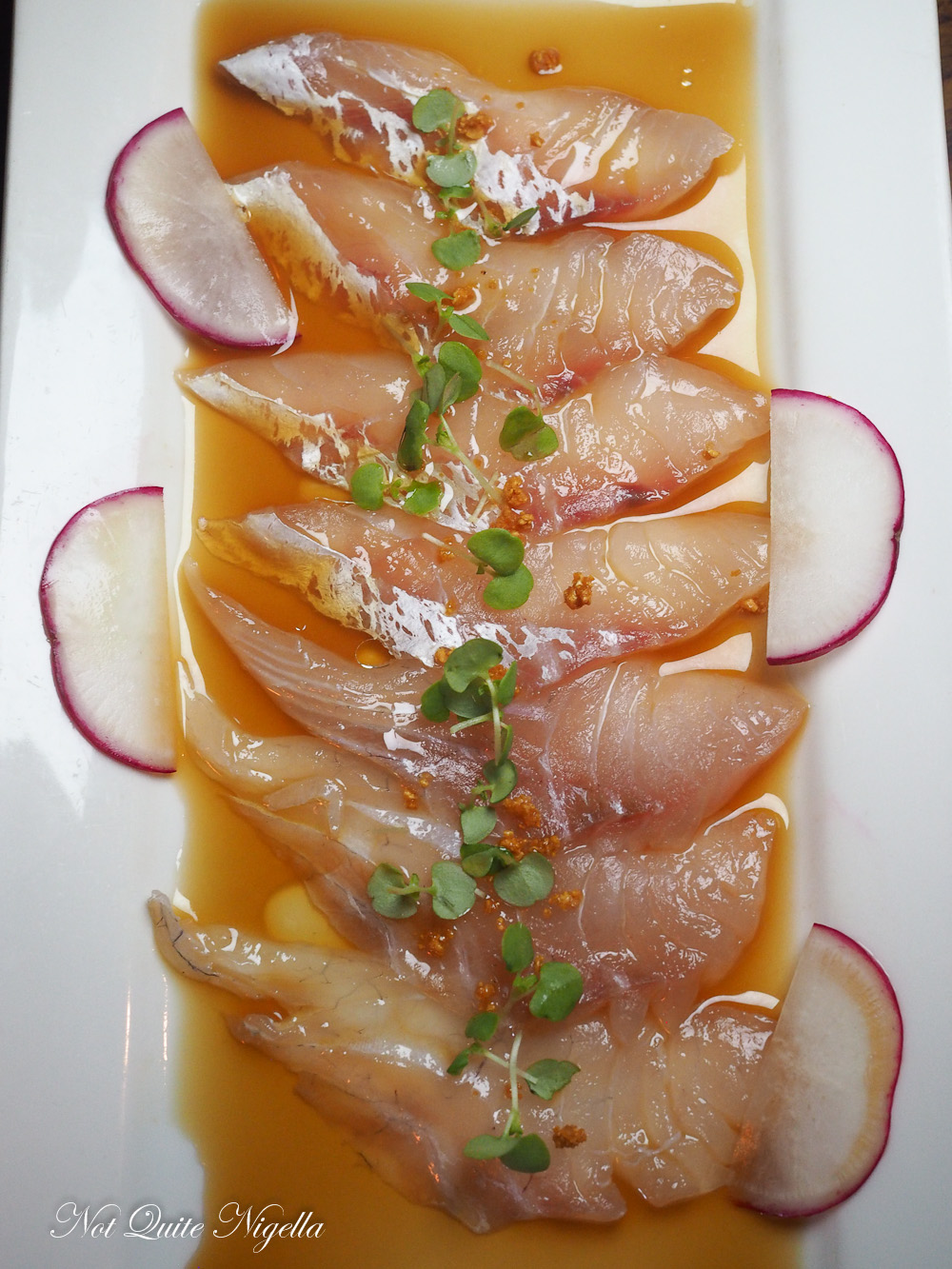 The carpaccio has a hint of truffle oil. Truffle oils seem to be getting better in quality and the thin slices of sashimi pick up the truffle oil nicely. 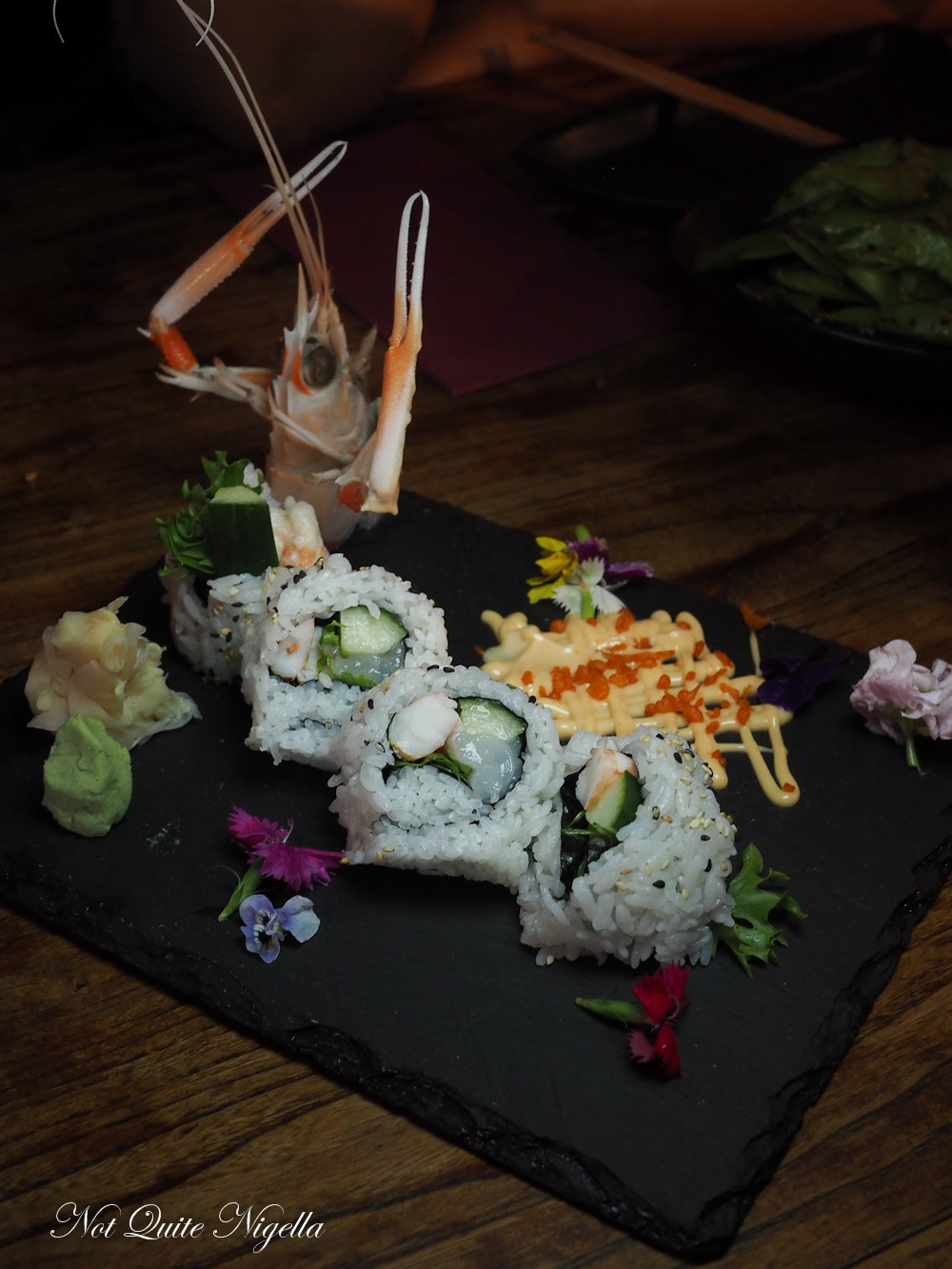 Whilst it looks visually arresting with half an enormous scampi on the plate, there is very little scampi in the sushi and it is mostly rice. I do like the house made chilli mayonnaise which is perhaps what attracted me. 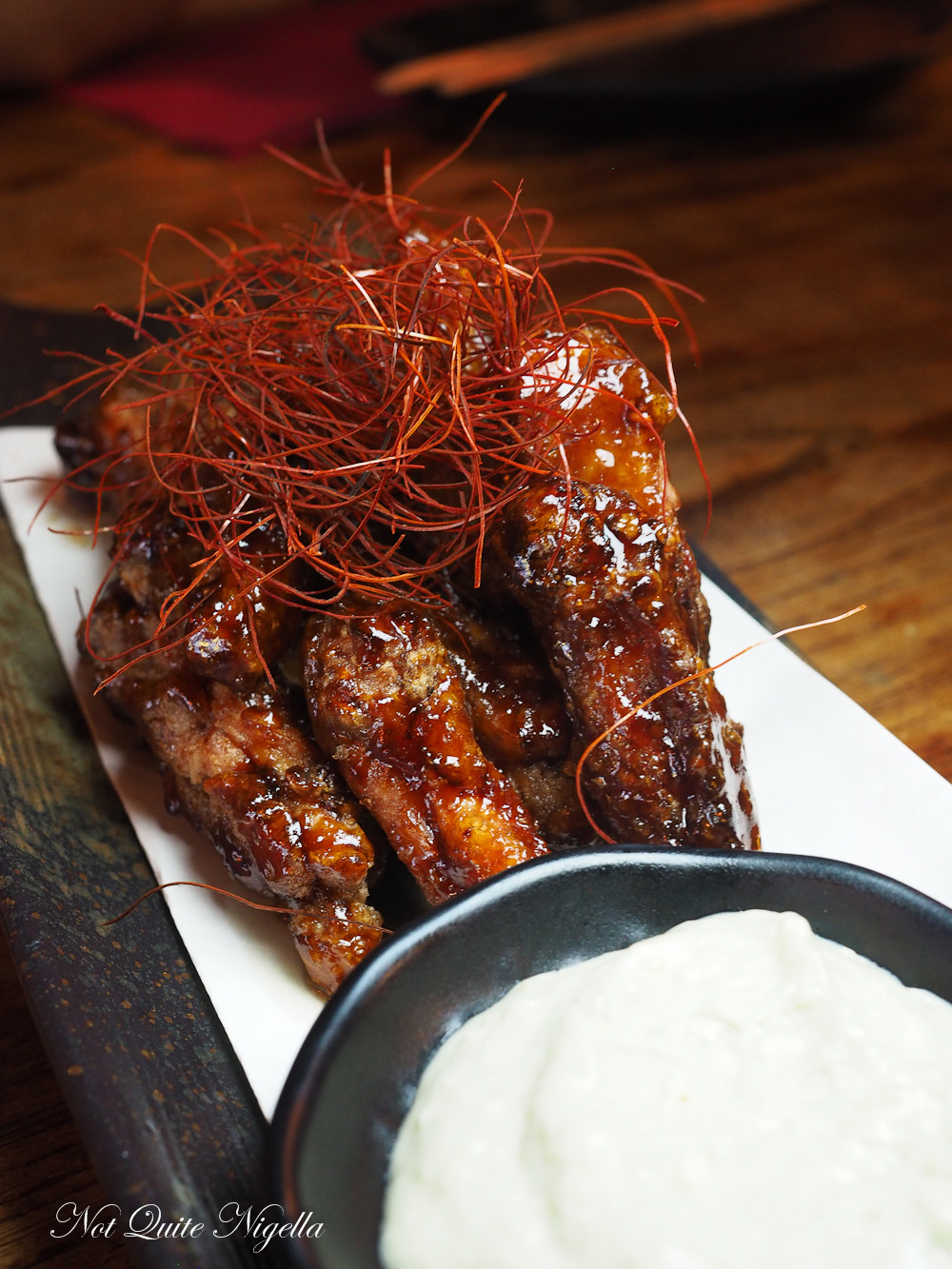 Our waitress had said that a lot of people just come here for the buffalo wings so we order these. They're split in two so that there is one bone in each piece. They're very crispy with a sweet coating to them and come with a delicious blue cheese sauce that it doesn't really need but it's pretty good anyway. The nest of deep fried capsicum is more decorative than adding any great flavour benefit. 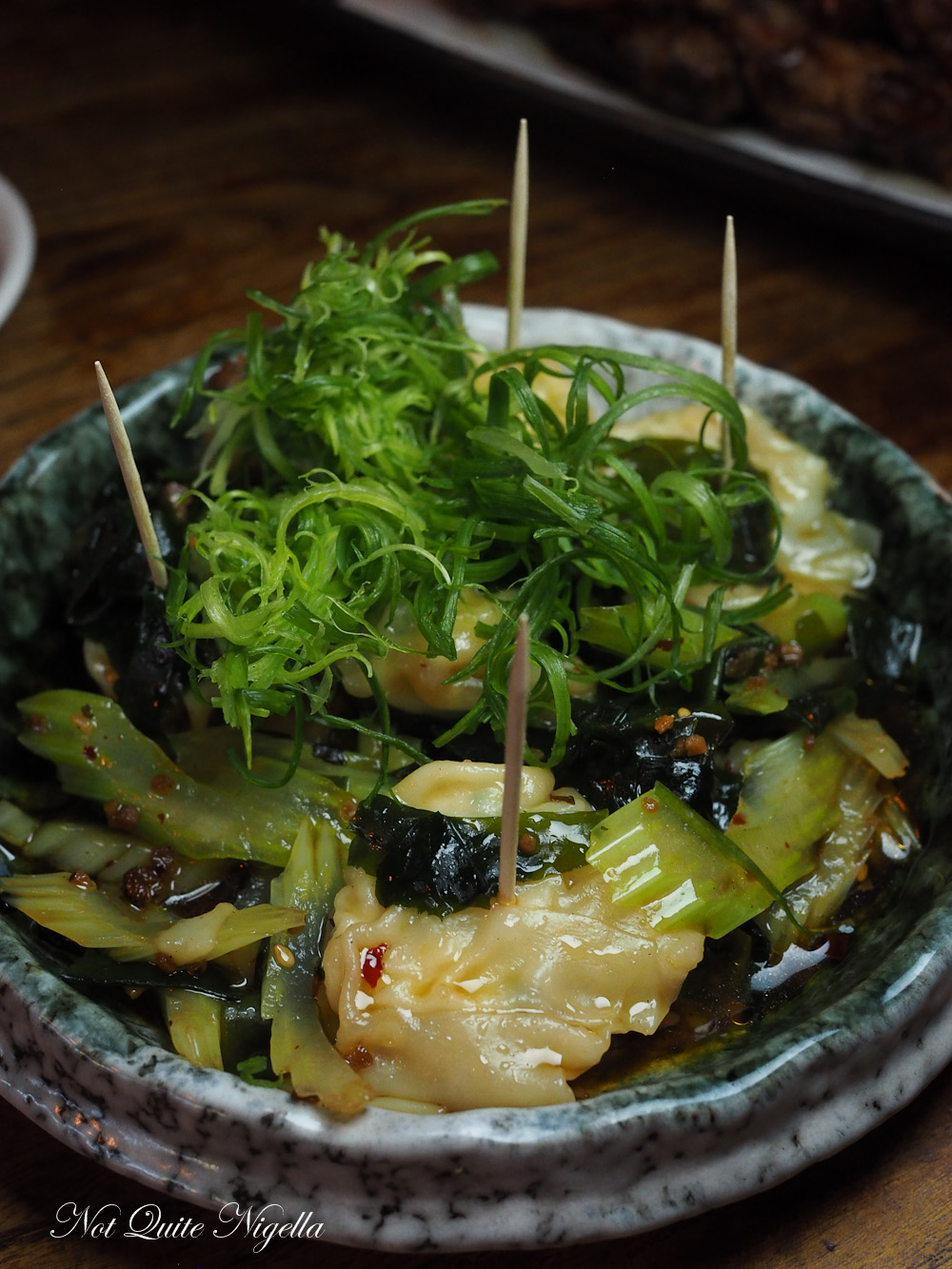 I was hoping for something more creative given the name. These have nothing to do with fish fingers but they are fish dumplings with a serve of black beans and lots of green onions. 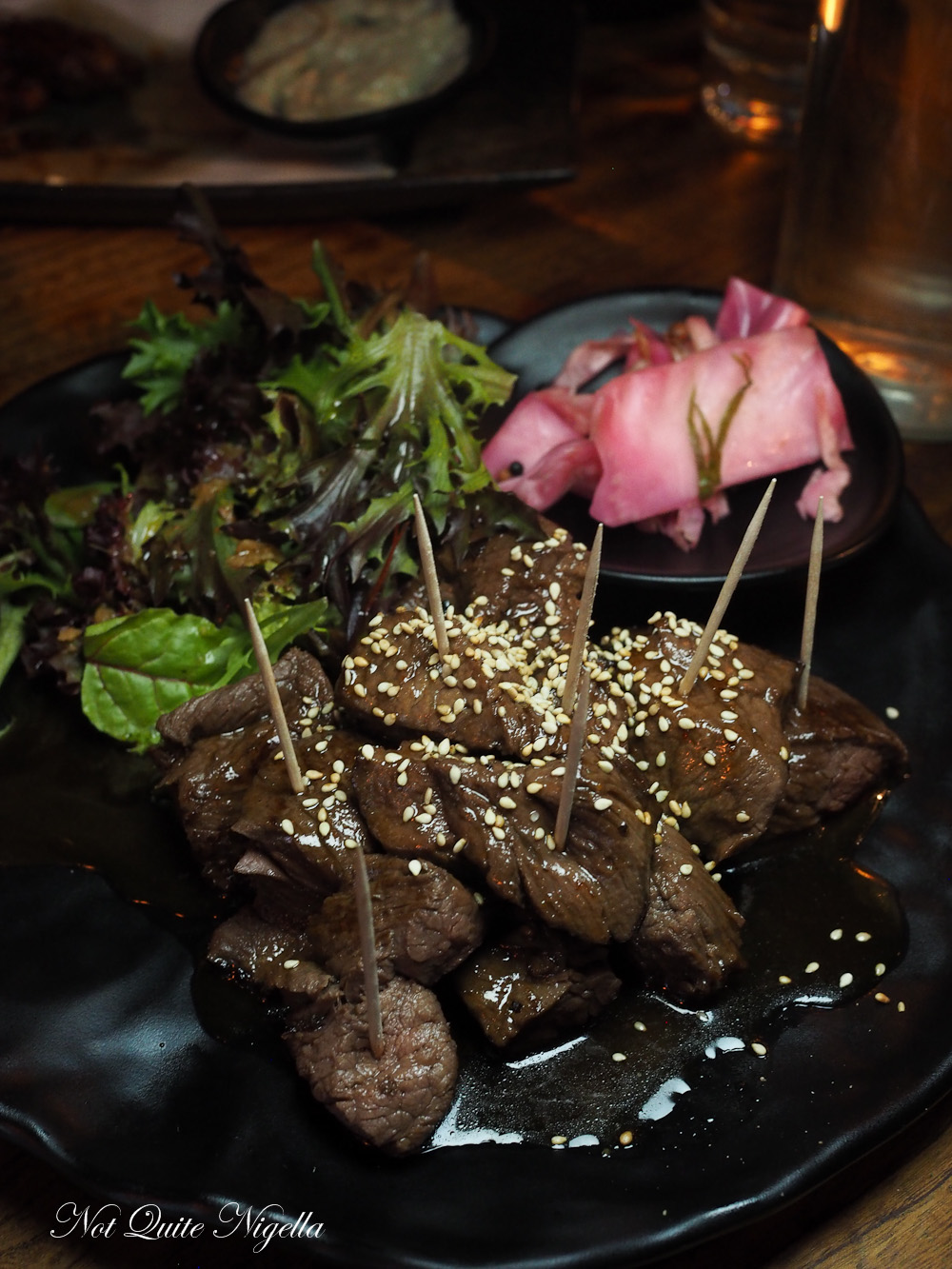 The one bite beef is tender but whilst the texture was good, the flavour didn't really appeal to me because I still remember the amazing beef that I had in Tokyo which were dry aged and succulent cubes. 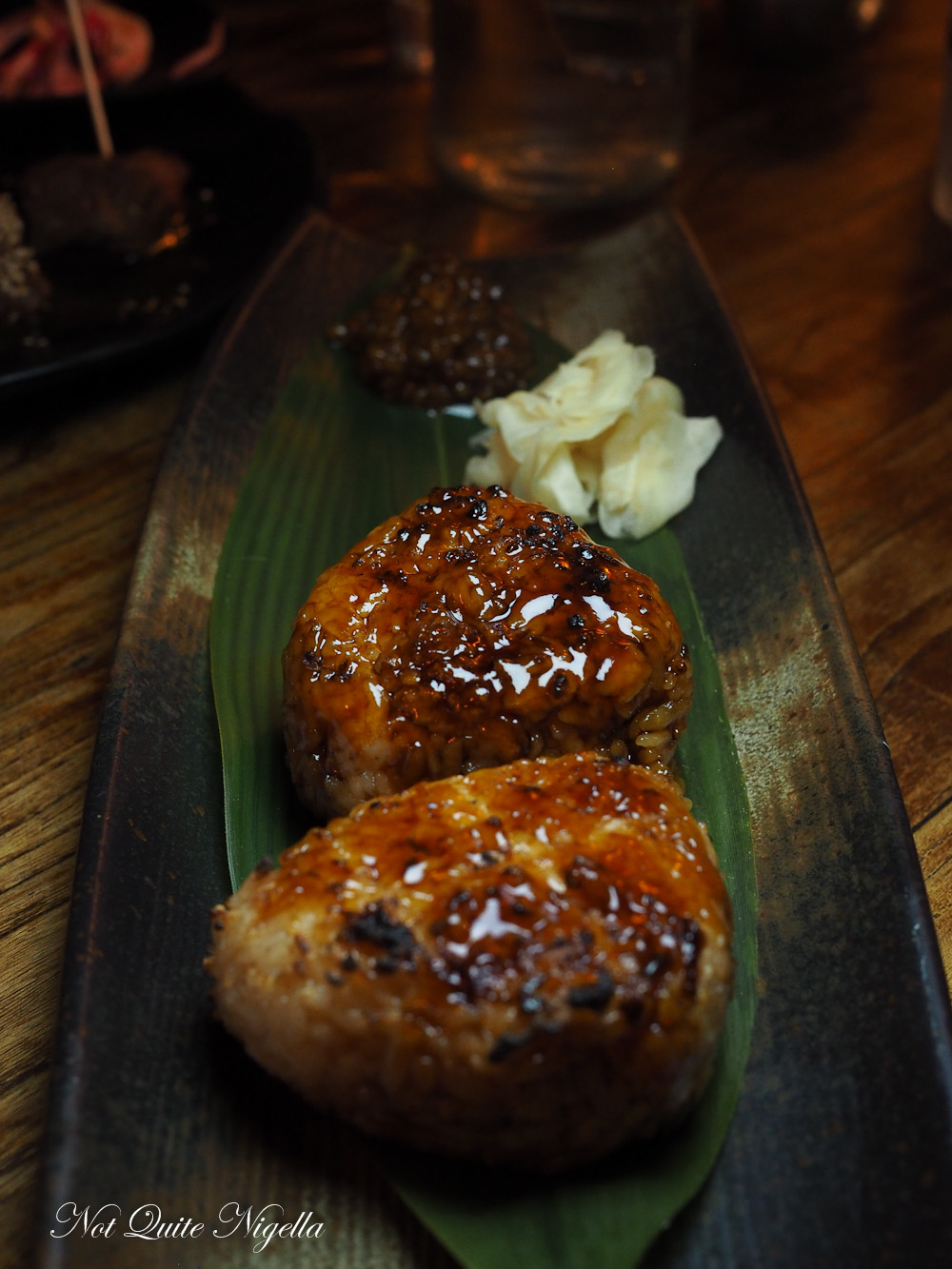 Everything comes out one at a time so you really do need to share meals. I was hoping that these would be crispy grilled (the yaki or grill bit) but they're soft. They're also supposed to come wrapped in nori but they don't. I was having a nostalgic moment for my time living in Japan. While the sauce is good they would have been nicer with a crispy grill coating and with the nori that they were supposed to come out with. I ask the waitress about the nori (which you use to pick up the onigiri) and she brings it out but by then we are finished. 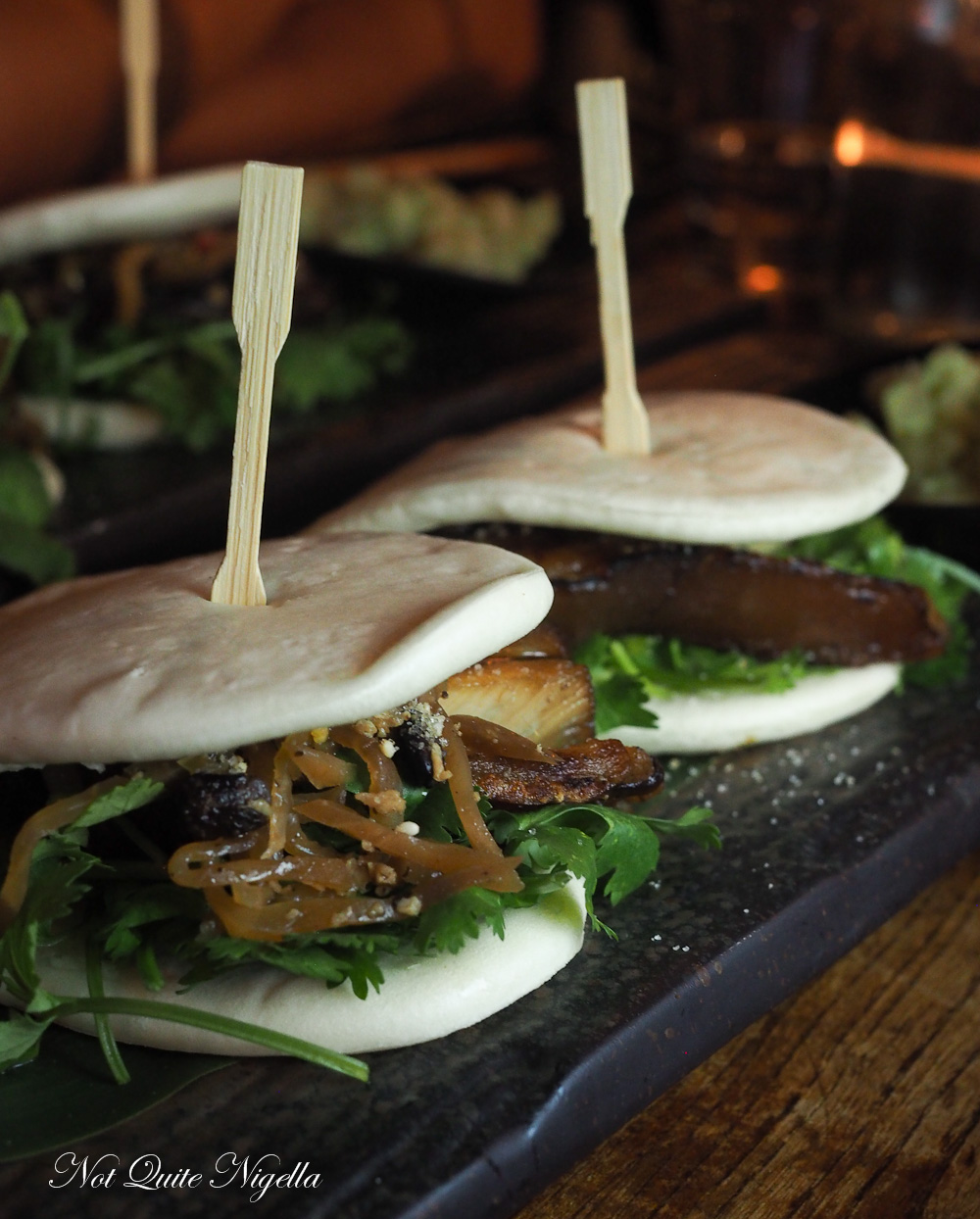 The sliders are enormous. In fact I'd say way too big for one serve. There's also a lot of herbs but being picky here a lot of the stems of herbs rather than just the soft leaves so that does distract from the fatty, luscious pork belly. It comes with a side of hot diced wasabi apple. 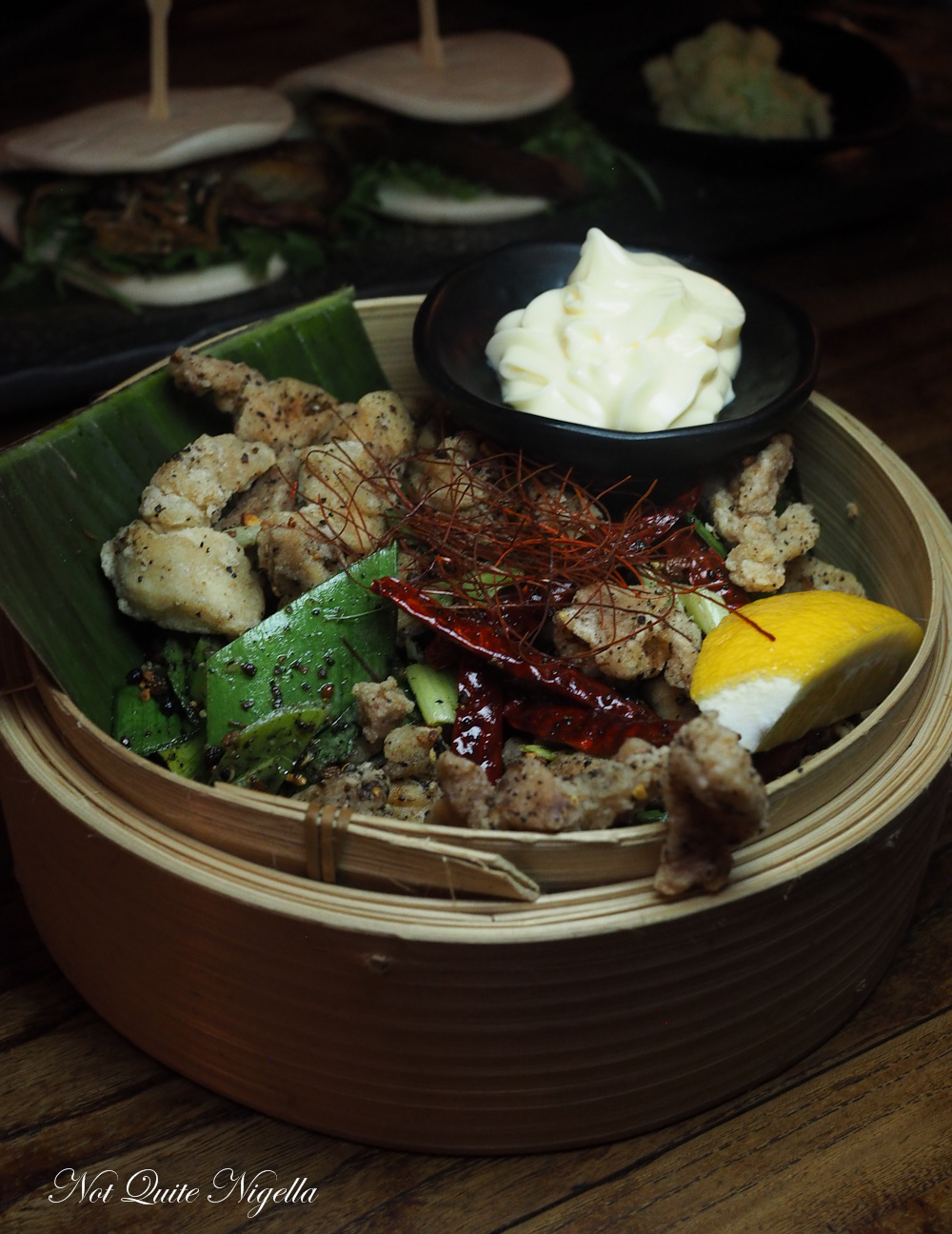 The chilli chicken isn't so much chilli but it's Szechuan peppercorn and totally different from what I was expecting. The chicken is dry fried with lots of celery and a side of mayonnaise but we may have over ordered so we left most of this. Also Louise and I aren't big fans of celery. 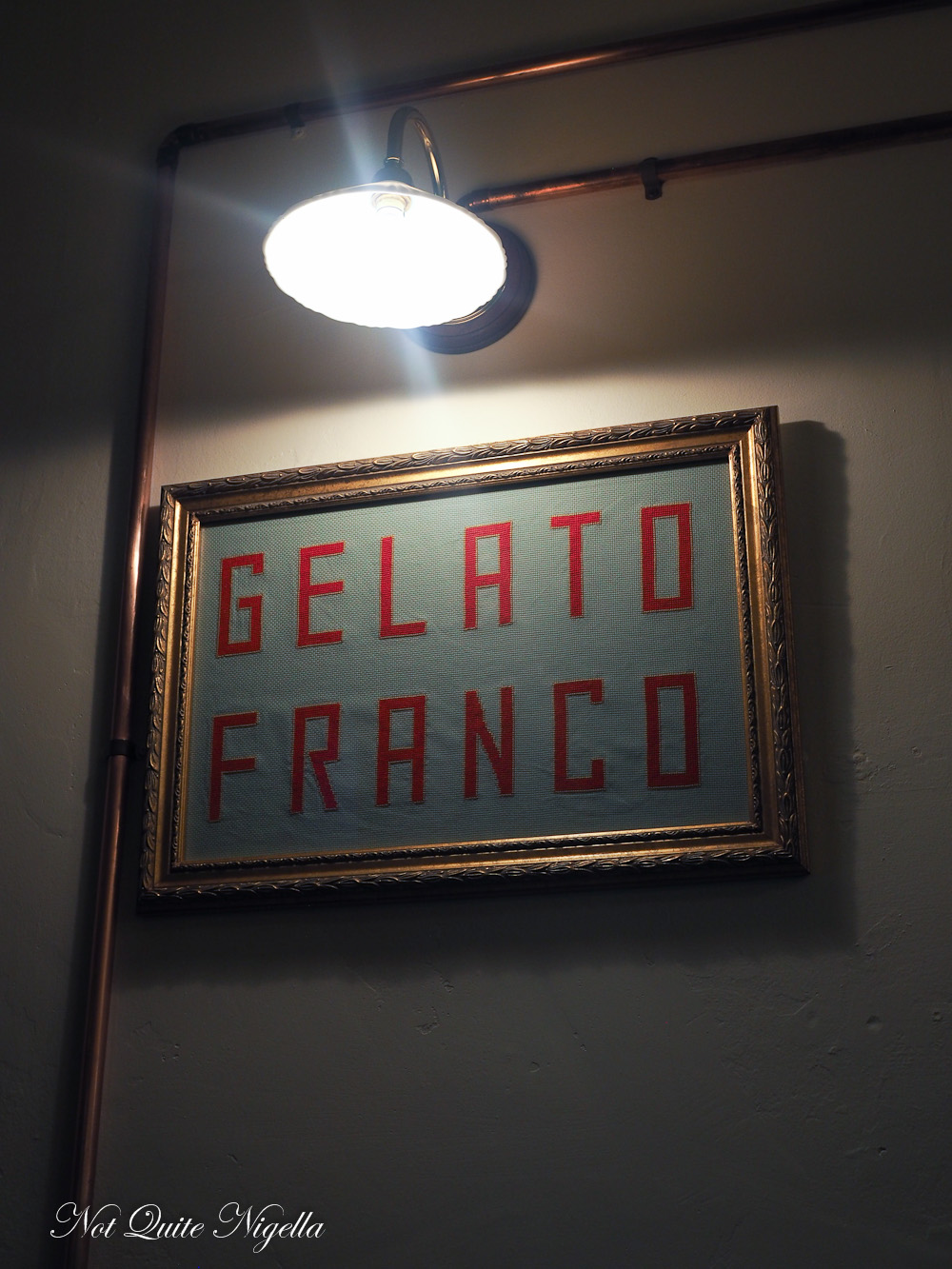 We ask to see the menu. "Oh good because you've got about half an hour," says our waitress reminding us that we need to vacate the table by 8pm. It's fine, we don't see anything particularly compelling on the dessert menu. There's green tea ice cream, egg custard buns and chocolate cake. 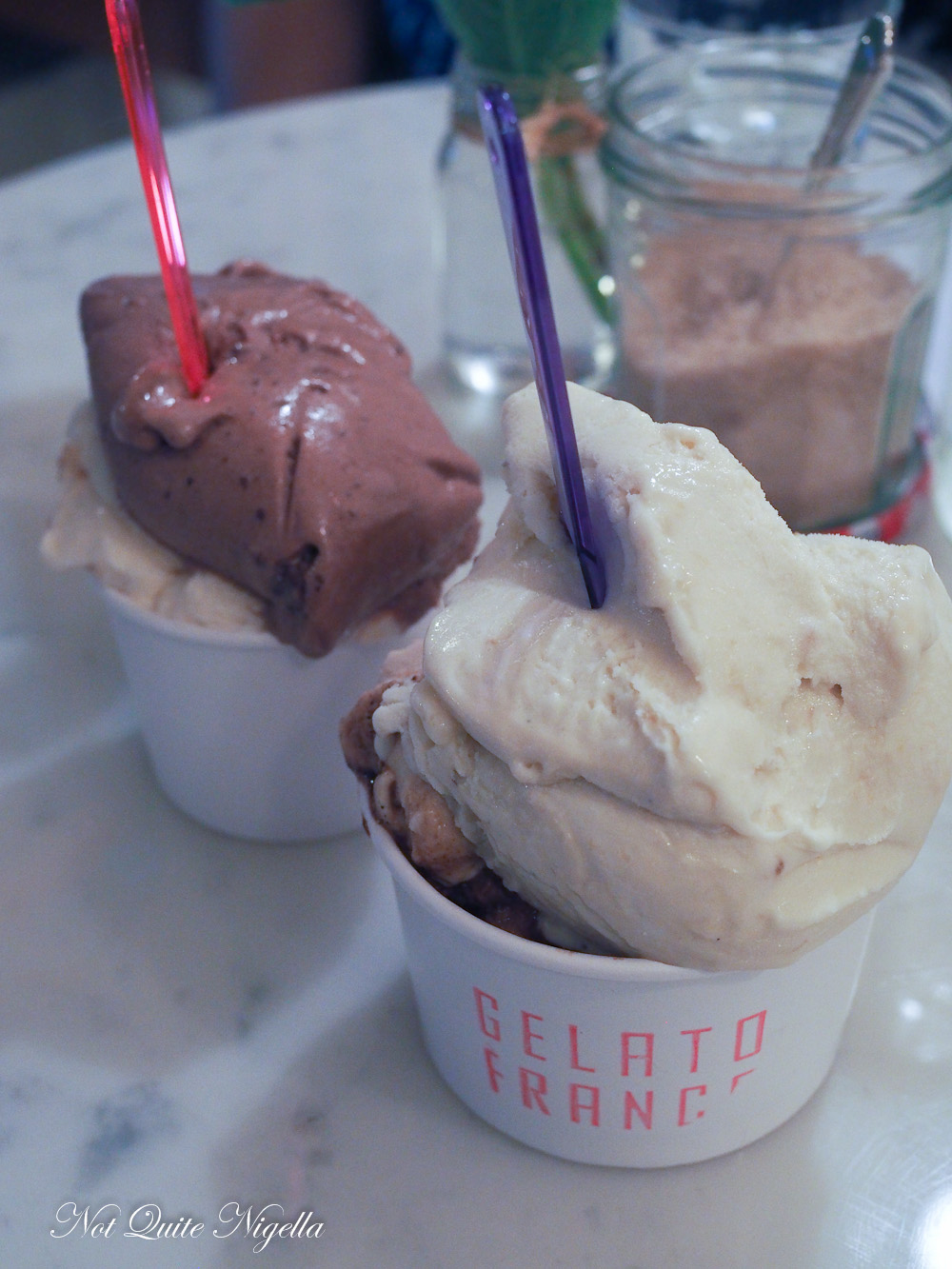 Instead we take a drive across the city to Marrickville to the newly opened Gelato Franco on Marrickville Road. The gelato here is made of pure, sweet fruit. There are no gels or flavourings added and we see piles of whole watermelon ready to be churned into gelato. 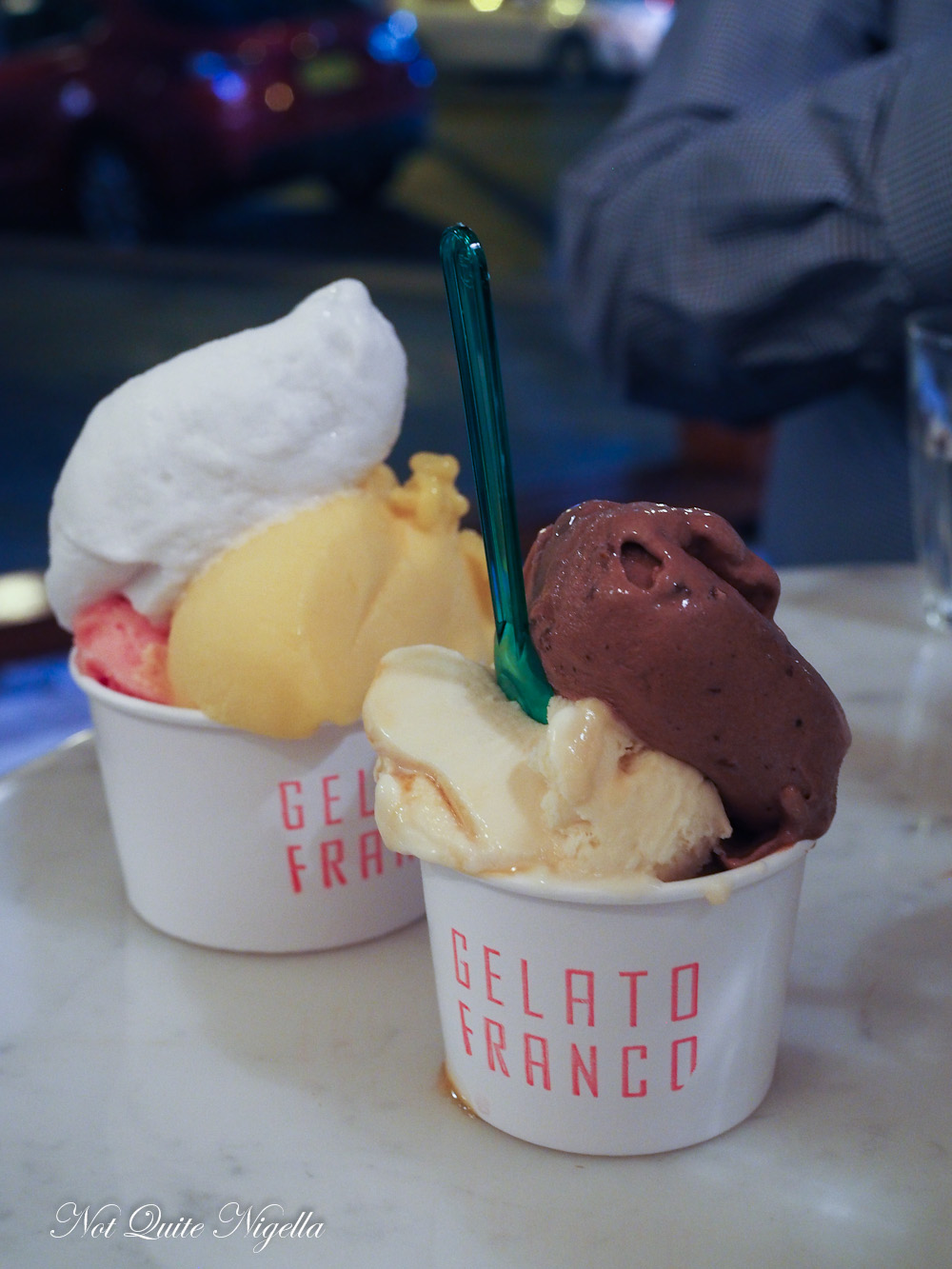 Service is very friendly and they offer us tastes of most of the flavours. Between the four of us we try practically the whole cabinet. Of the creamy gelato there is Toblerone, a rich chocolate gelato studded with chocolate bar as well as a Donatella, panna cotta, Stratiacella (chocolate chip), coffee and my absolute favourite: zabaglione with a hit of marsala. The fruity ones are all excellent but my heart is stolen by the mango that tastes of pure, sweet Kensington mango. The watermelon is also en pointe as is the coconut. It was worth the drive.

So tell me Dear Reader, do you ever go for a different location for dessert? Even across town? And when you order gelato do you try flavours before choosing one?