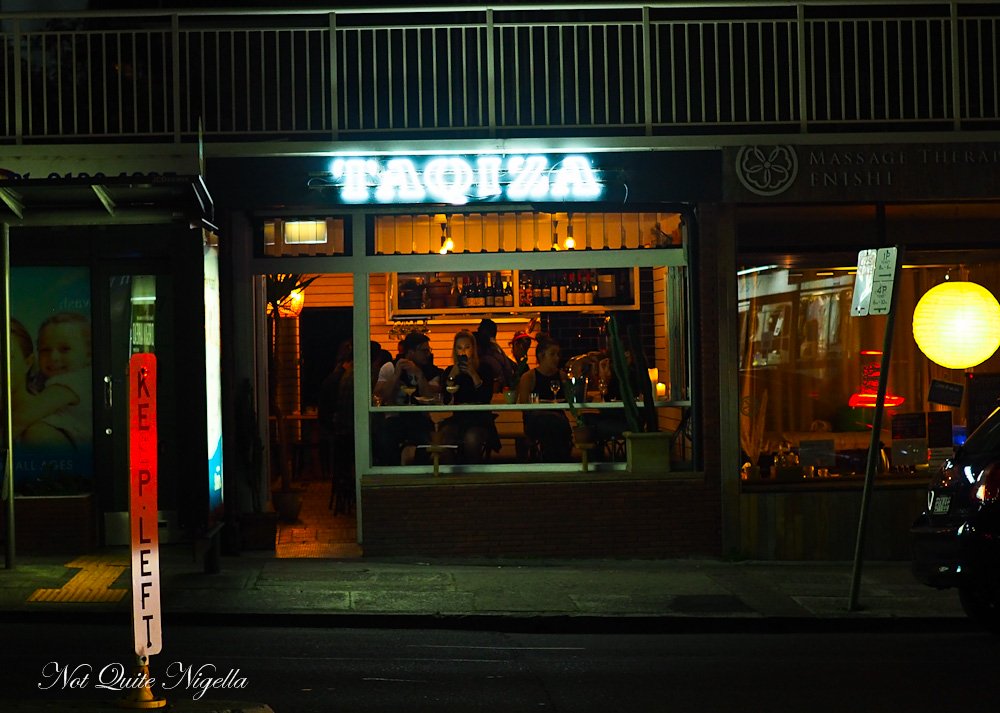 Taqiza on Glenayr Avenue in Bondi Beach serves authentic Mexican food. Taqiza means "taco party" and true to name, there's a wide range of tacos available. The restaurant's chef Pablo Galindo Vargas is a veteran at many of Sydney's Mexican restaurants and the tiny kitchen is busy cranking out guacamole with chips, Oaxaca cheese fondues and tacos galore. 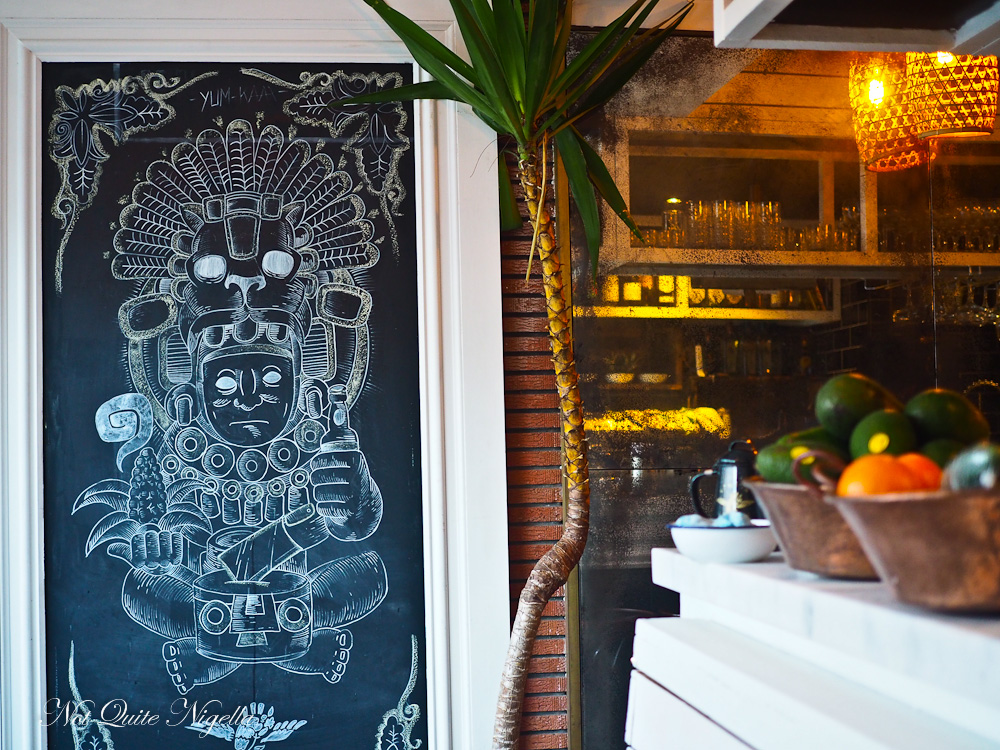 It was a spur of the moment dinner, one to celebrate some good news for Mr NQN. Taqiza is a tiny spot. A few tables in the front and back but the kind of spot that you would need to book for as it gets busy especially on Fridays to Sundays. 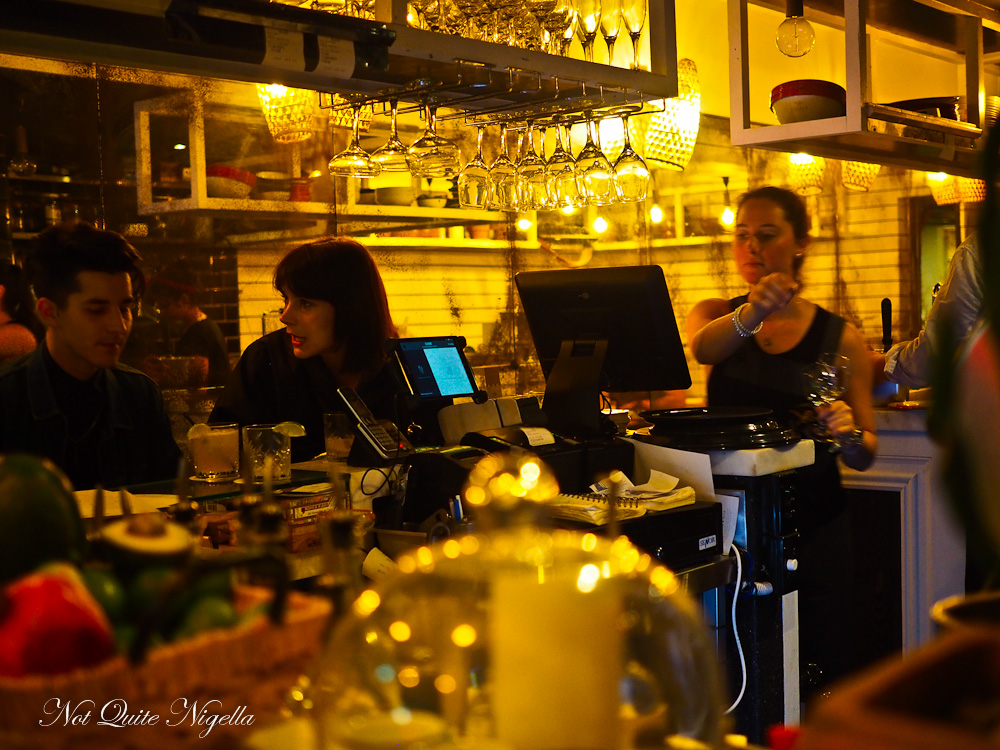 Taqiza's tagline is "Mexican gastronomy". So what is Mexican gastronomy exactly? Pablo says, "To understand Mexican food we have to understand not only the variety of the natural resources, but also the variety of different cultures and traditions within the country. This diversity has created amazing regional cuisines, each with it's own ingredients and personality. Mexico has 32 states, and every region has a very distinctive cuisine." 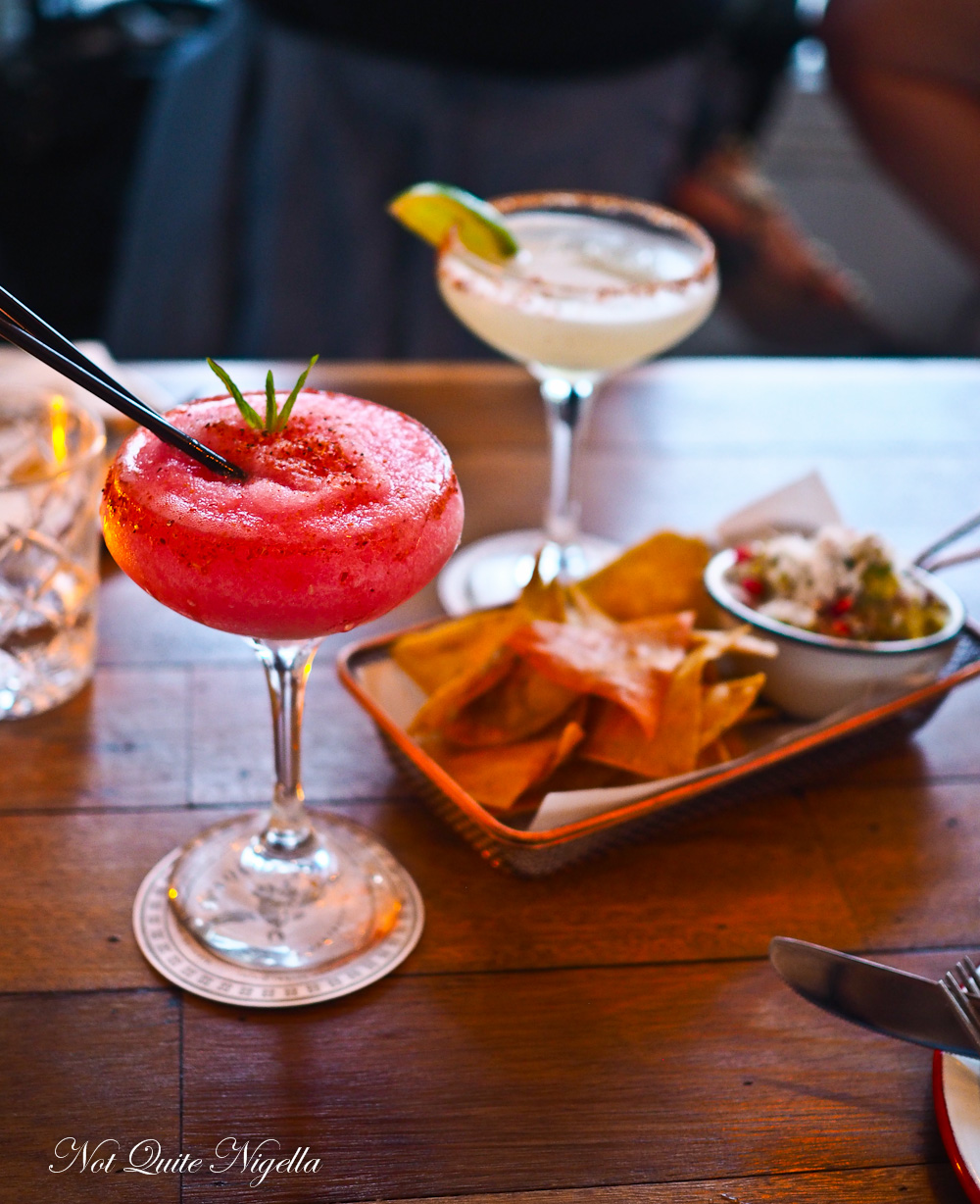 It's a Friday night so drinks are in order. We order a jalapeno margarita for Mr NQN and a frozen watermelon margarita for me. I really like mine, it's refreshing and just the ticket for the unseasonable warmth. It is made with Arette Blanco tequila, Cointreau, syrup, fresh lime juice and fresh watermelon. Mr NQN likes his which is made with Arette Blanco tequila, Cointreau, fresh lime juice, syrup and fresh jalapeno but the heat seems mainly on the chilli powder outside than in the margarita itself where the chilli spice is quite mild. Also to be noted: being Bondi, cocktails come with vegan egg whites instead of the real thing. 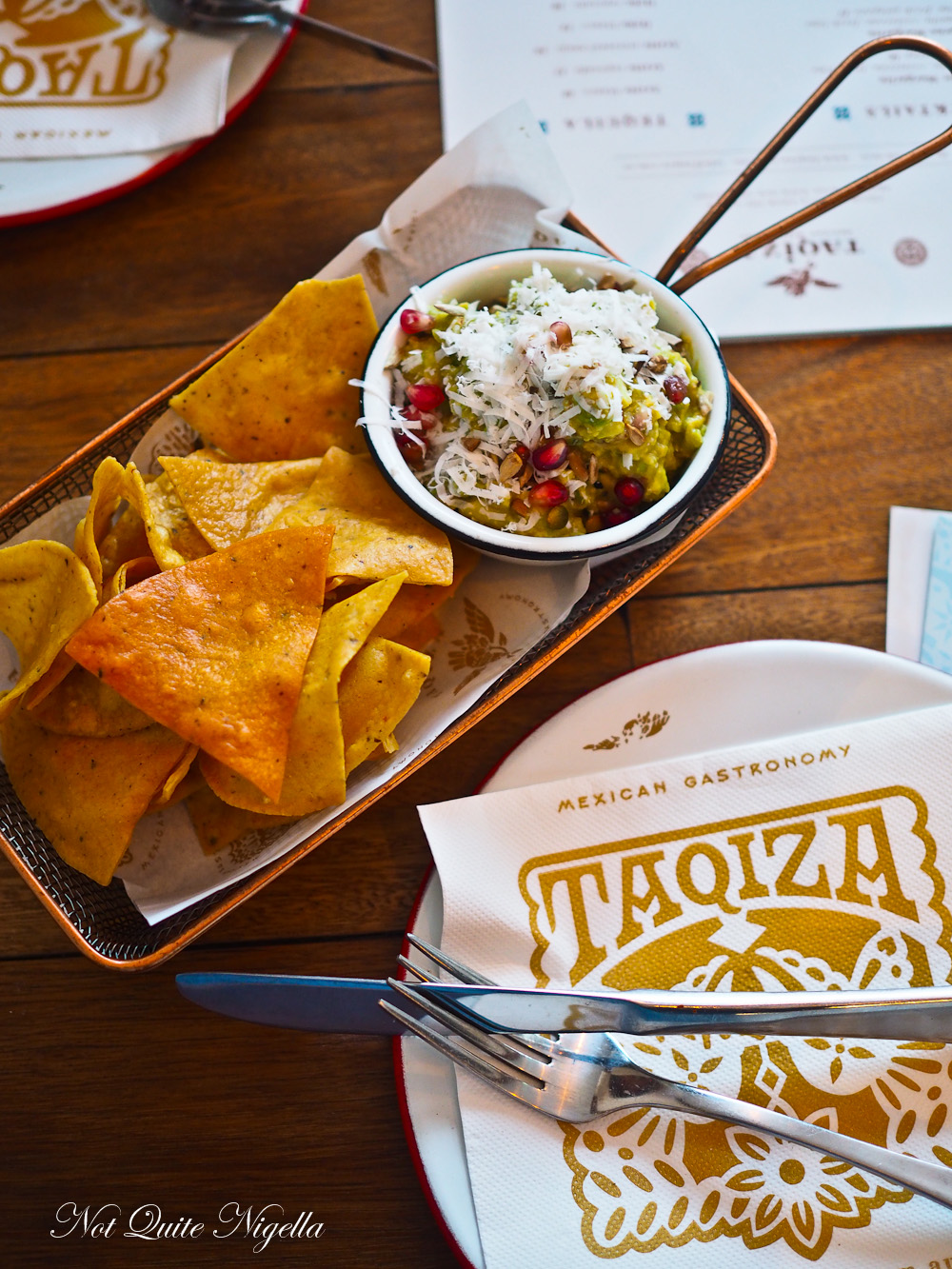 We order a serve of guacamole with ancient grains, pomegranate seeds and fresco cheese on top. The crunchy deep fried corn chips are moreish and we make fast work of the chunky, well seasoned guacamole. 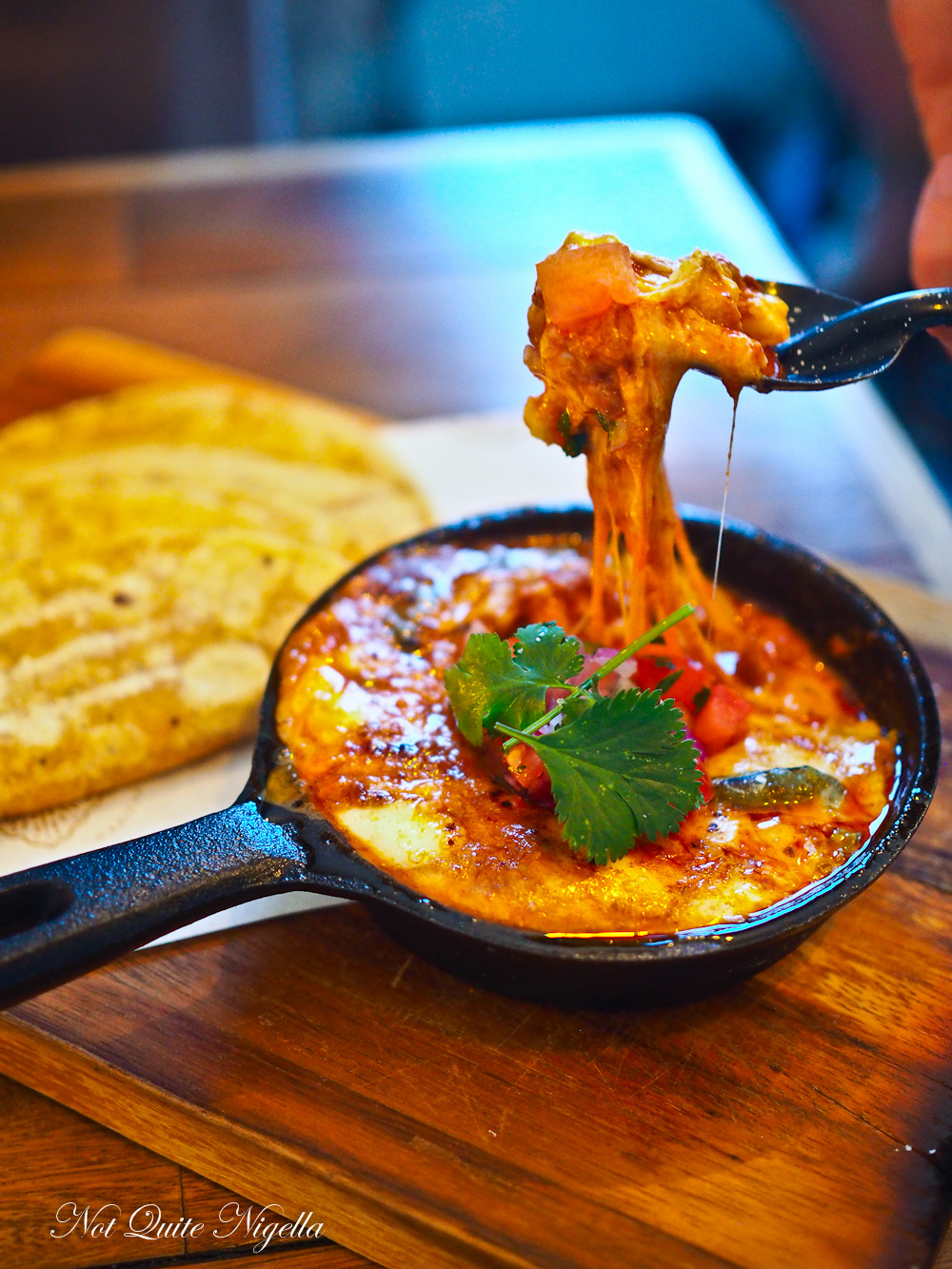 There was one thing that I knew that we had to order-the oaxaca cheese fondue with free range chorizo and cactus all in one gooey, scarlet tinged pan. Yes it's messy but sometimes you just need to roll up your sleeves and get down and dirty with it because the reward is in the pleasure of eating it. Oh and they'll bring extra napkins if they see you struggling with chorizo oil all over you (yes, me).

We order a few tacos because this quintessential street food features heavily on the menu. Pablo says, "Everybody in Mexico eats “comida callejera” or street food. While street food is found all over the world, perhaps only Thailand vies with Mexico for such astounding variety." There are eight taco toppings in total and we order three as regular tacos, a seafood one on a separate plate (for my allergy) and then another one as a taco bowl. The tacos come with three different sauces that change from a regular roster of five that vary in the degree of heat. There is a mild Tomatillo sauce with green heirloom tomatoes and serrano chilies, a Tinga sauce which includes guajillo, chipotle, ancho, habanero and pasilla chillies and the Borracha sauce with tomatoes, jalapenos and negra modelo beer. 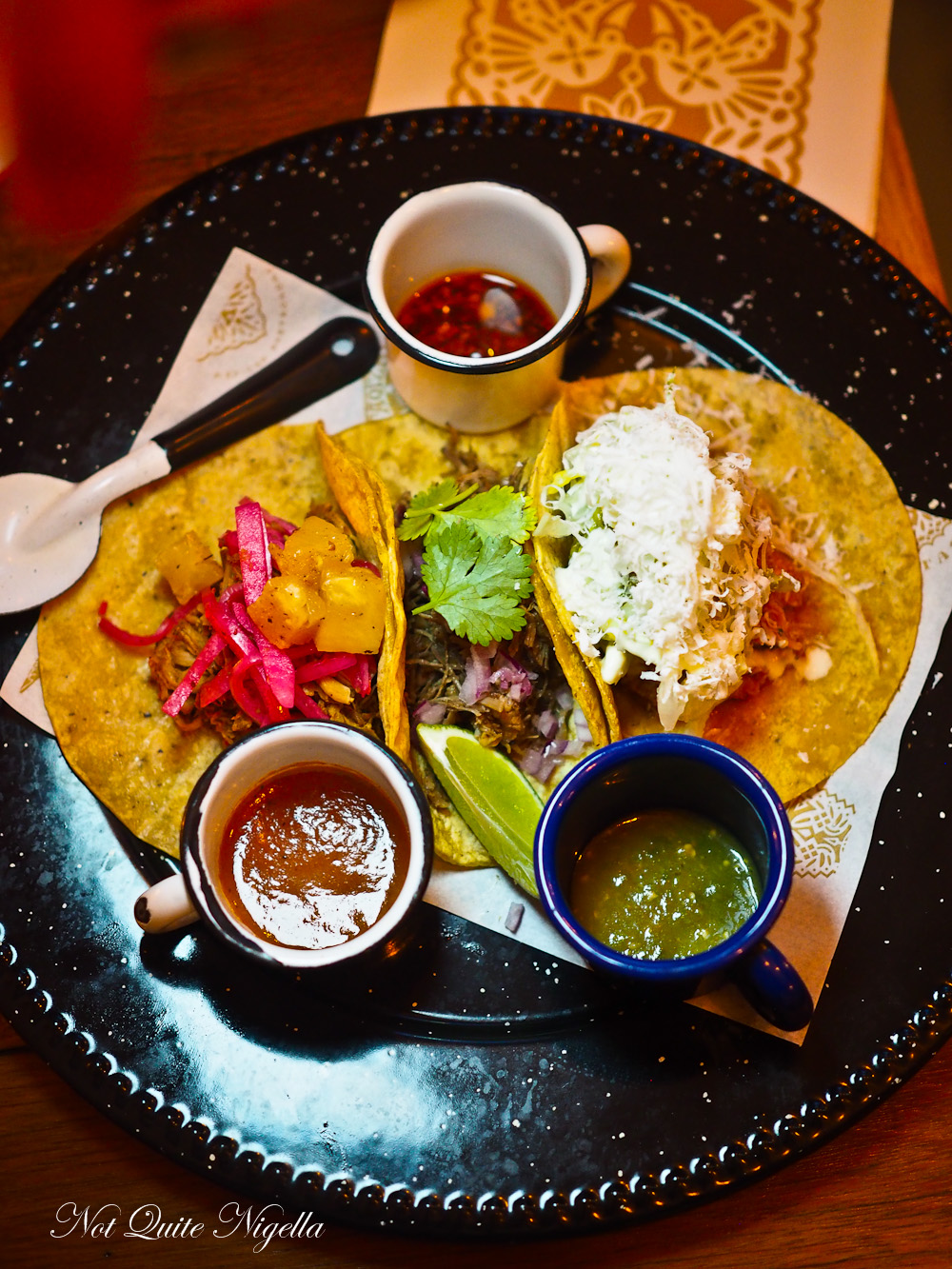 The chicken taco comes covered in a mountain of fresco cheese, lettuce, guacamole, citrus cream and tinga sauce. The corn tortillas are made with Nixtamalization. "Nixtamal is an ancient craft process used by the Aztecs in which the corn is gently cooked in a natural alkaline solution and rested overnight. This process enhances the taste and nutritional value of the corn, increasing the calcium, iron and zinc levels," explains Pablo. The corn tortillas do tend to break in half when eating (as opposed to flour ones) but they're worth the potential mess. This is also the most filled taco if you like them super filled too with lots of creamy, meaty flavours.

Next is my favourite, the Birria style goat taco with lots of spiced goat meat, onion, coriander and a lime wedge. Goat is a very typical meat in the area of Jalisco and Guadalajara Mexico where it is served as a celebratory dish or as a cure for hangovers. There is also the pulled pork with pibil marinade, haberno pickled onion and chunks of caramelised pineapple, also good. 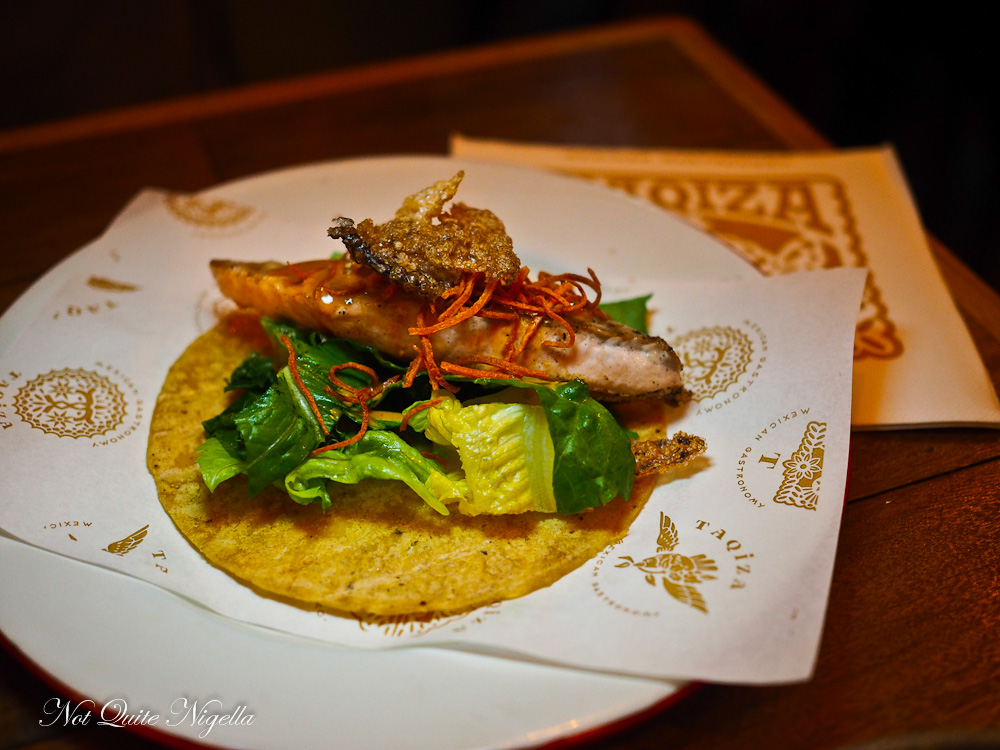 Mr NQN tries the bbq salmon taco (there are two fish tacos, a barramundi and salmon). The salmon is grilled with with zarandeado sauce (a tomato, soy, Worchestershire, garlic and mayo sauce), crispy skin & chili shreds. He likes the fish taco because the fish isn't dry at all and the flesh retains a good moistness. Pablo explains that the sauce originates from the Mexican state of Nayarit but he has enhanced it with soy and other ingredients.

If you want a meal in itself, the taco bowl is just that. You choose your topping (and there are two vegan taco toppings too, tempeh and cauliflower) and it comes on a bed of mixed salad leaves and pearl couscous with dressing. It's quite filling too, the beer braised beef cheeks with onion crema and shreds of crunchy sweet potato the perfect topping for virtuous supergreens. The beef is slow cooked and rich with nice large melting chunks of beef. 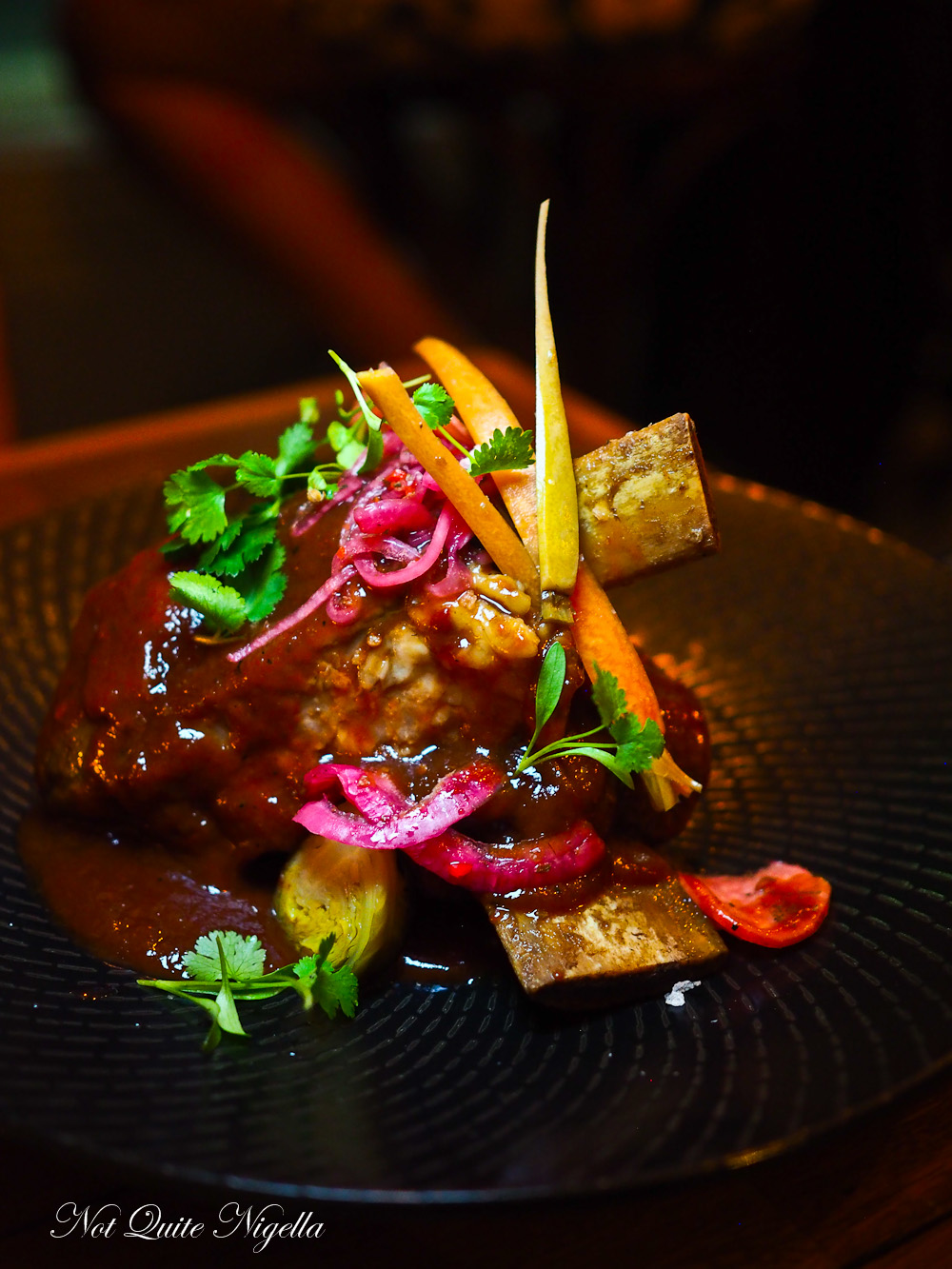 The beef short ribs come out last and a word of warning-these are enormous. Like not just big but really big as they have two ribs (usually you get one rib). They're spicy and saucy on the outside with a pronounced sweetness to the chipotle glaze. They are paired with Mexican pickled cinnamon Brussels sprouts and carrots. The meat itself is very tender and delicious and the texture is cotton soft. The only thing is that it doesn't come with a starchy side - we would have loved some rice with corn or beans would have been great to soak up that sauce but there are none on the menu. 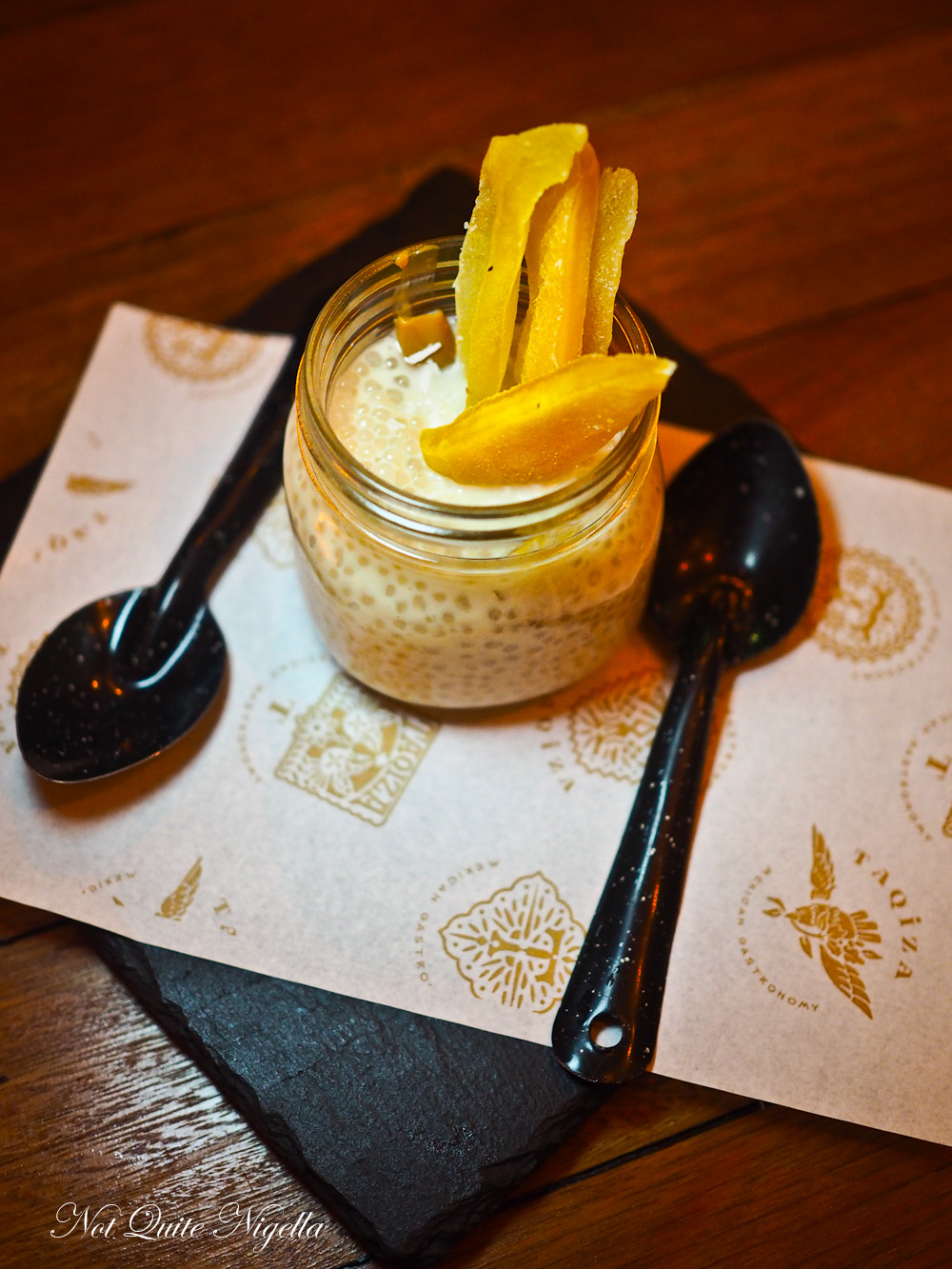 There are two choices for dessert: a horchata tapioca or a panna cotta. The horchata tapioca wins out and we order that. It comes in a jar with a small scoop of dulce de leche. The horchata, a blended rice milk spiced with cinnamon and sugar is perfectly creamy enough - it's not heavy at all so you don't feel weighed down. There are slices of dried mango in it too which aren't really needed although I think come summer, fresh mango would be perfect for this. And I'll be back for it then too.