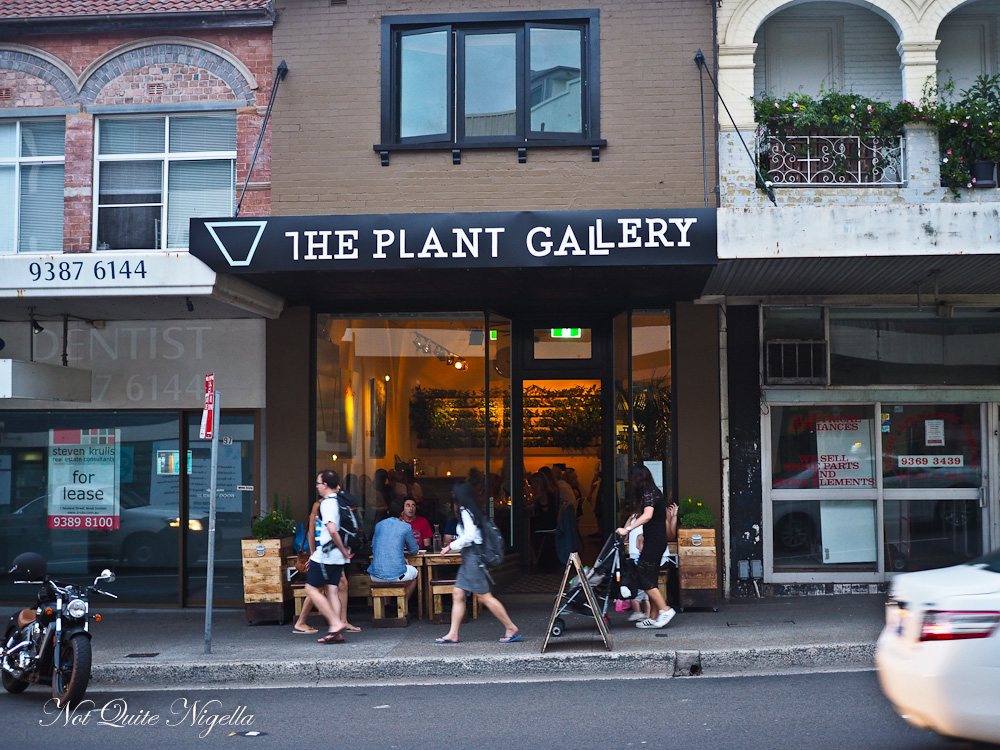 So you've probably heard of raw and vegan food, but how about Peruvian raw and vegan food? The Plant Gallery on Bondi Road serves up this intriguing type of cuisine with a range of kombuchas, cold brewed coffees and smoothies. Nothing is served over 48°C or 118°F. Menu items range from sweet onion pizza, a raw green curry to Peruvian fried rice. So what is it like?

"So ummm the place that we're going to is raw and vegan," I tell Mr NQN as we are a few metres away from The Plant Gallery on Bondi Road. But seconds after I utter those words, three men walk past, one holding a stack of three pizzas from the neighbouring takeaway pizza chain. "Damn, that smells pretty good..." I mutter taking a deep whiff of cheese, pizza dough and a meatlovers pizza. Perhaps it's not the best time to walk into a raw vegan place... 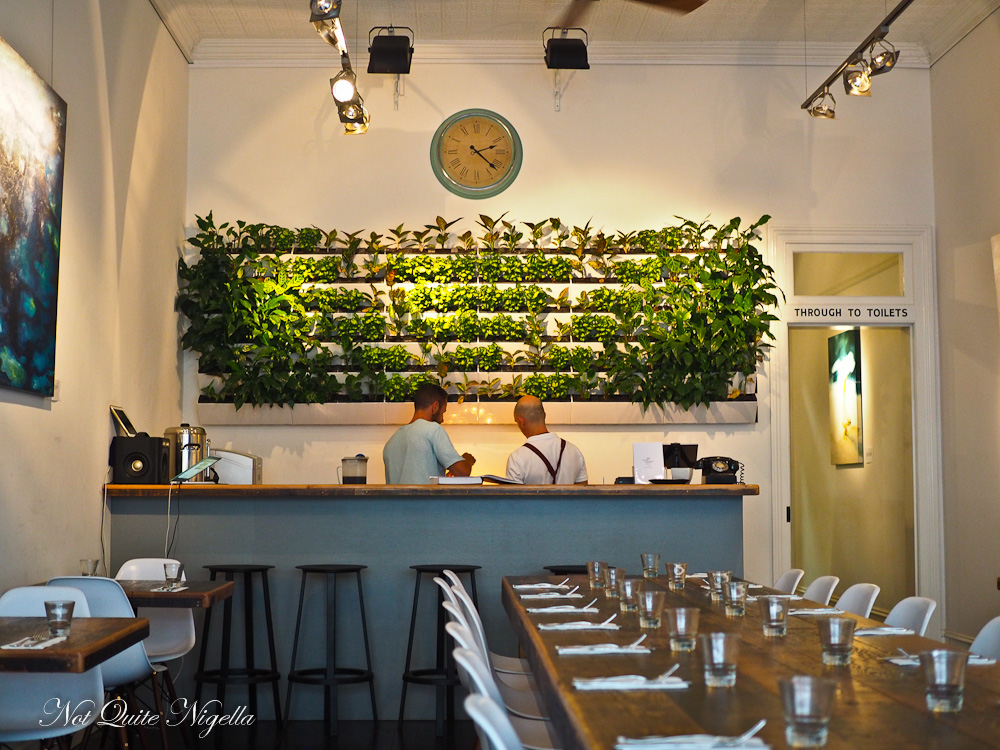 Open for just over a month, the menu is an ambitious sounding mix of Peruvian raw vegan cuisine. There are paintings for sale on the wall, a back bar with a wall of plants and a long share table as well as smaller tables along each side. We are offered our choice of seats - when we arrive at 6:30pm the place is empty so we have our choice of table (and tip if you get there at 6:30pm that's also when the free street parking on Bondi Road kicks in ;)). Service is friendly but a little uncertain from everyone. Perhaps it's a function of serving a novel type of cuisine. We take a seat in the cushioned window seat.

Behind The Plant Gallery are David Ortega and his head chef Juan Carlos Miranda. David says, "I was inspired to open the restaurant after meeting up again with Juan Carlos in August 2014. I had seen the transformation that he had undertaken both physically and spiritually and became intrigued. After he invited me to his workshop in the mountains around Cusco and made the Mediterranean Roll (which is on our current menu) I had an epiphany. Raw food isn't popular in Peru. It's still in it's infancy but there is a growing awareness amongst certain people in Lima of the health benefits of such diet. It is steadily growing." David is also a keen cross fitter. 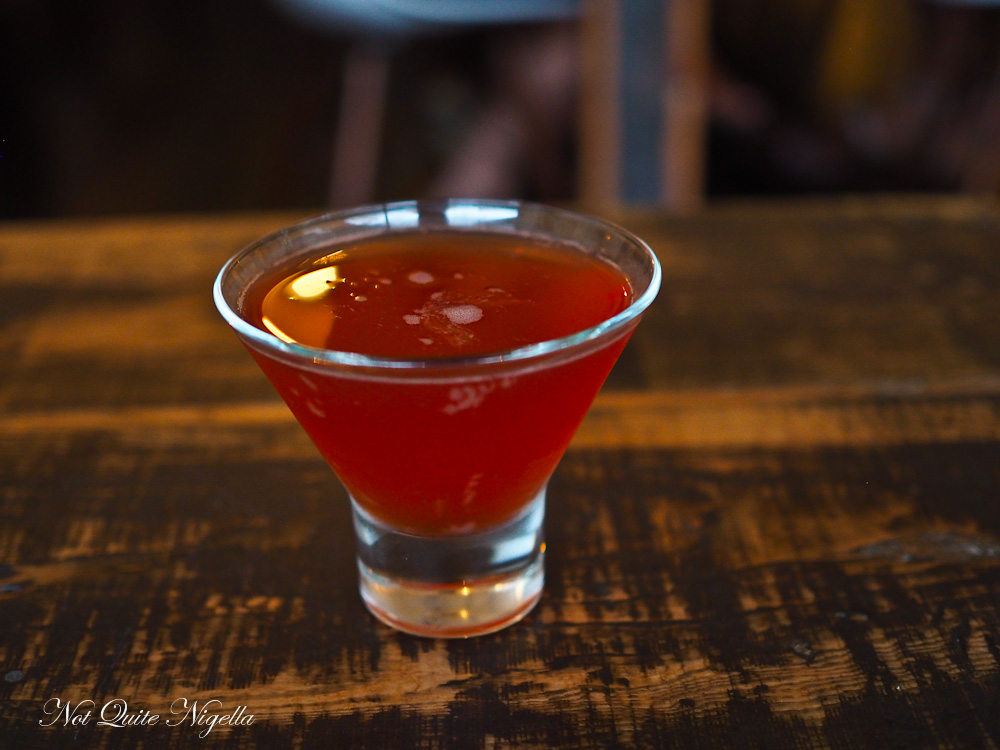 We start with a drink. It's a "Fire" kombucha (fermented tea drink) as recommended by the waiter which is made up of pineapple, cayenne and lemon. It's quite astringent and tart and spicy at the end. I later order a "Wind" kombucha with pomegranate and strawberry. That's much nicer. Probably one of the nicest kombuchas I've had. 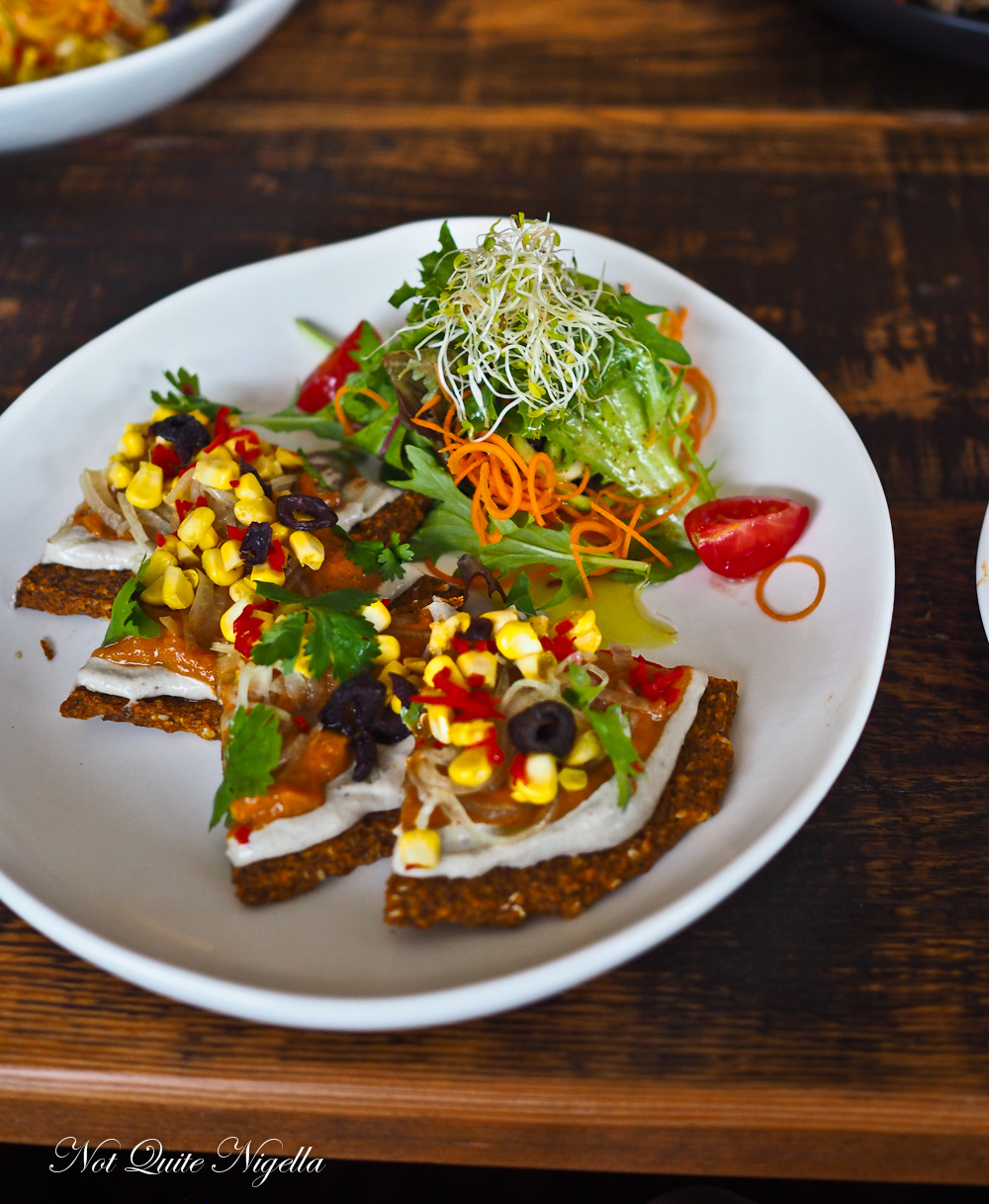 The food arrives quickly as the crowds fold in and the first thing we try is the sweet onion pizza. Okay it's not going to fool anyone that is craving a real Napoletana style pizza but it's really quite good. With a vegetable cracker base sort of like a Fettle Flat tomato cracker it is topped with nut cheese, caramelised onions, olives, sweet corn and coriander. I did manage to drop quite a bit of corn eating this but it was our favourite item.

I look around and watch the restaurant which is by now completely full. I'm curious about the customers here. David explains, "The customers vary. There are not that many strict vegans. We have mostly young professional women from the Eastern Suburbs interested in a healthy and delicious alternative. People that are looking for a unique dining experience that will not only bring them joy but also nourish them. Saying that we have had the local Bondi Jewish community enjoy our meals, vegans from the Western Suburbs, local children, hard core carnivores, all sorts." 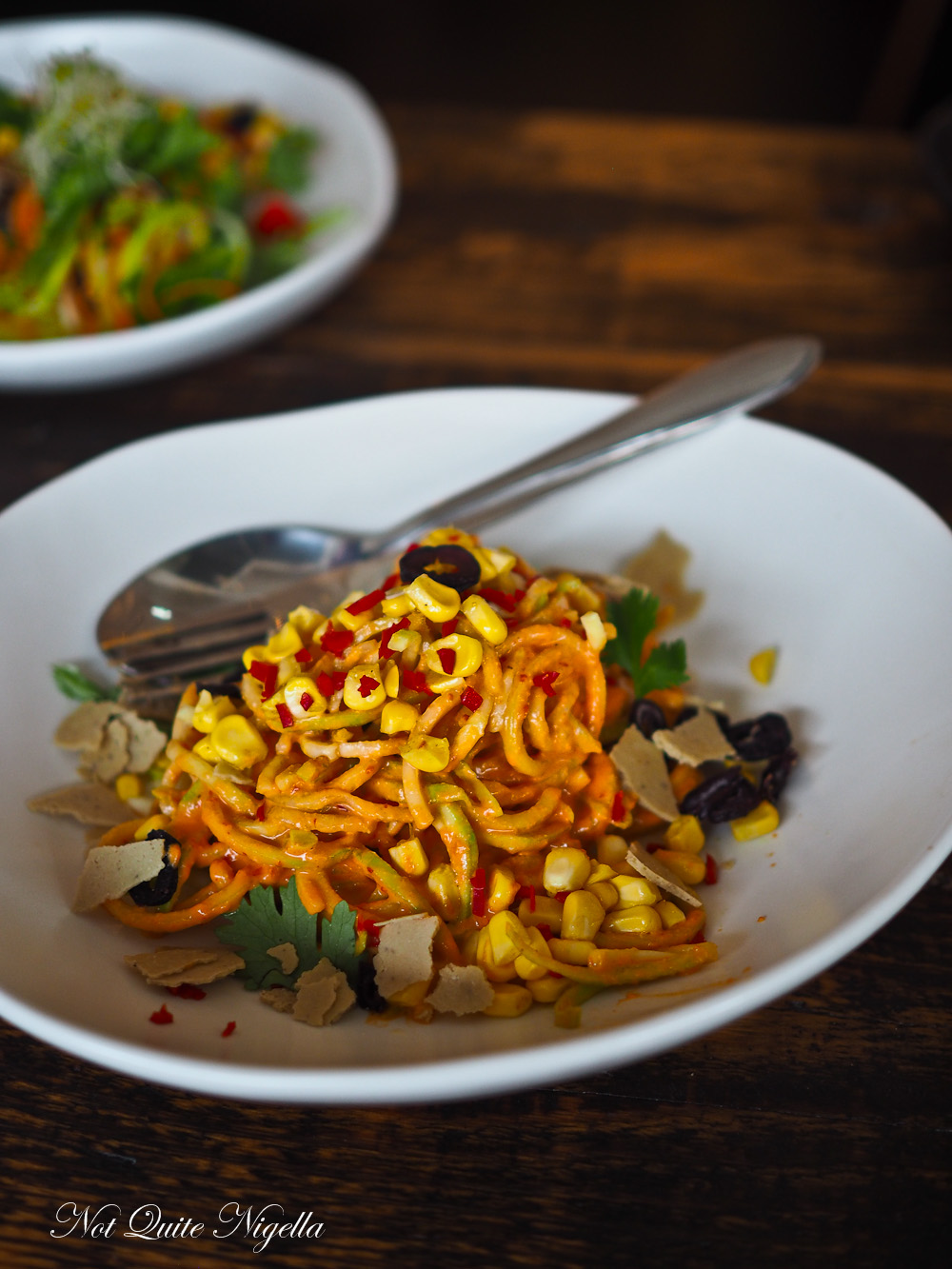 Everything looks appealing and colourful and the spaghetti made out of zucchini with a sauce of cashew and yellow chilli sauce, marinated sweetcorn, dehydrated black olives and cashew parmesan is also good. The main pop of flavour comes from the dehydrated olives and I could have used some more of those. 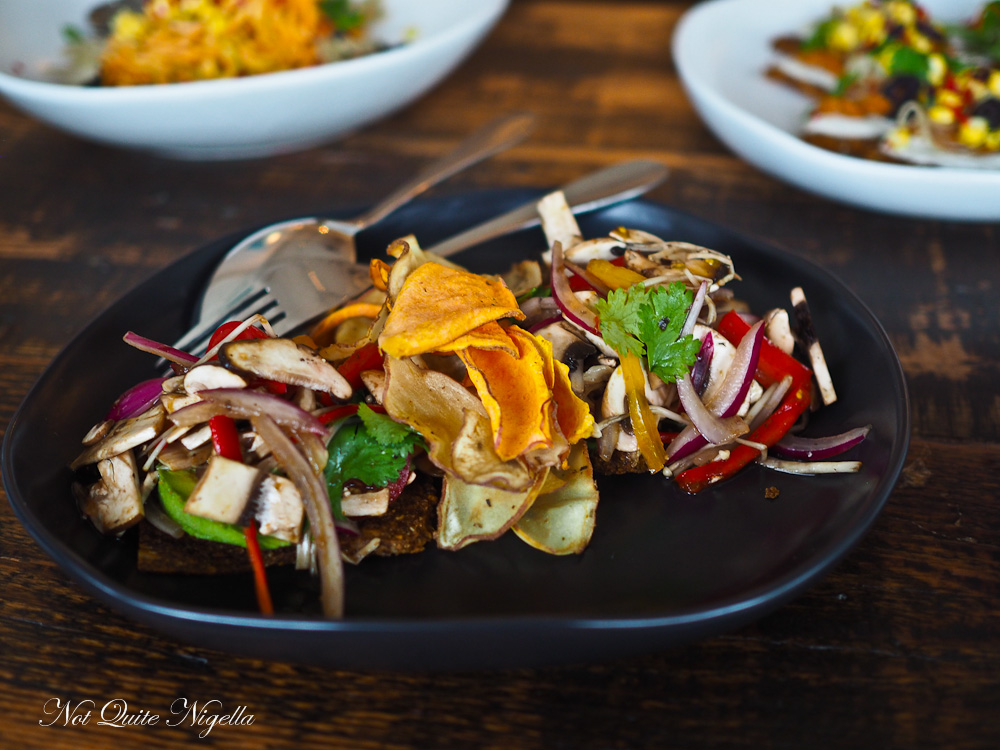 The mushroom dish with sliced mushrooms, onion and red and yellow capsicum is also well seasoned and full of flavour from the lime juice, ginger and chilli marinade. It's just a bit hard to eat as it comes out on two large square crackers. I'm not sure if I am supposed to eat the topping off and then the cracker or try to balance everything on the cracker. It comes with white and orange sweet potato that have been dehydrated-these do taste a tad dry. 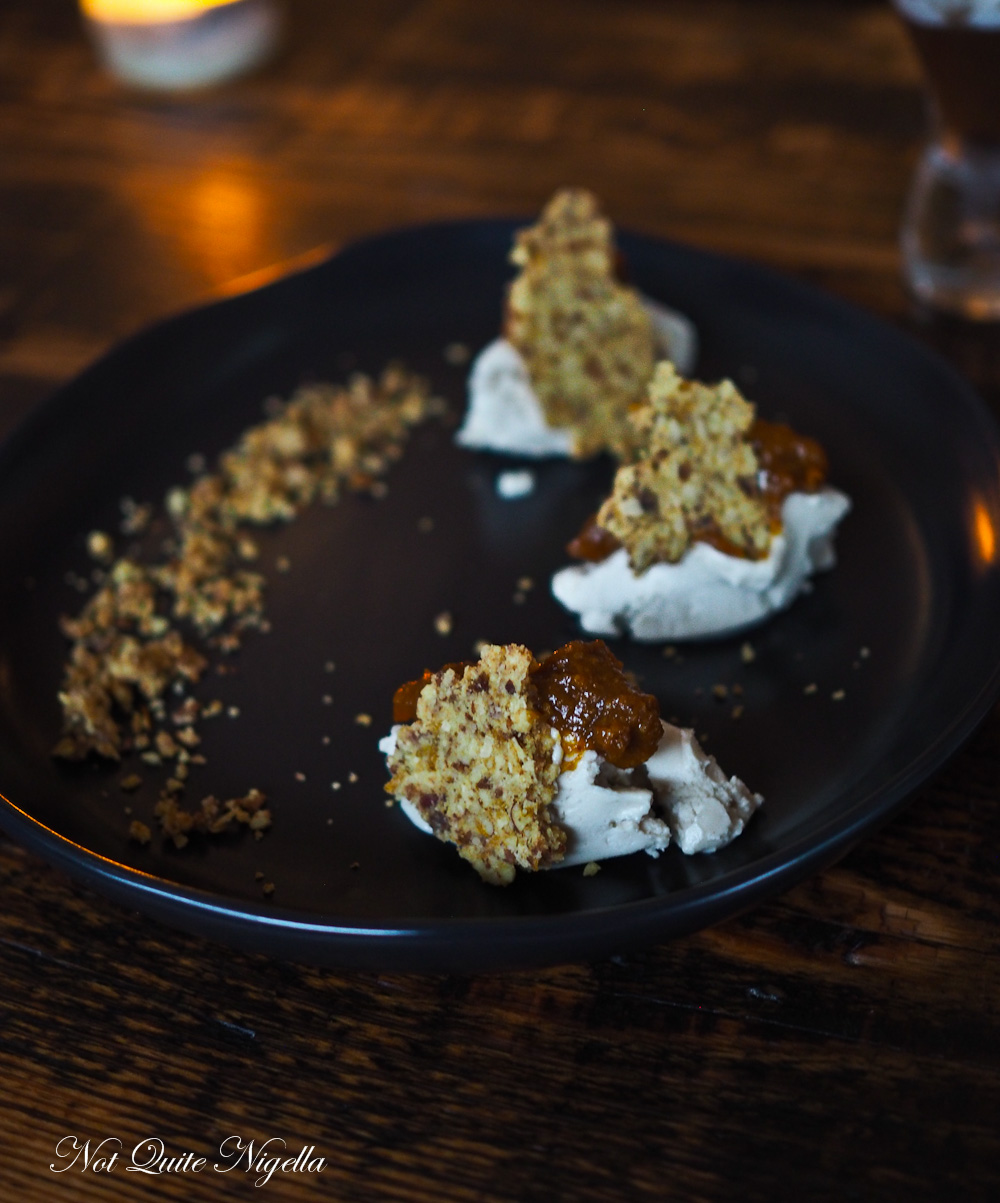 We have time for a bit of dessert before we have to dash and there are three on offer. The inca berry cheesecake is the waiter's recommendation although I think we do have different taste because we didn't really go for any of his favourite items. The cheesecake is creamy with a slight tang to it from the inca berries. The raw cookie part which is a cashew cheese and orange nut crumble didn't really do a lot for me but it's an interesting dessert. 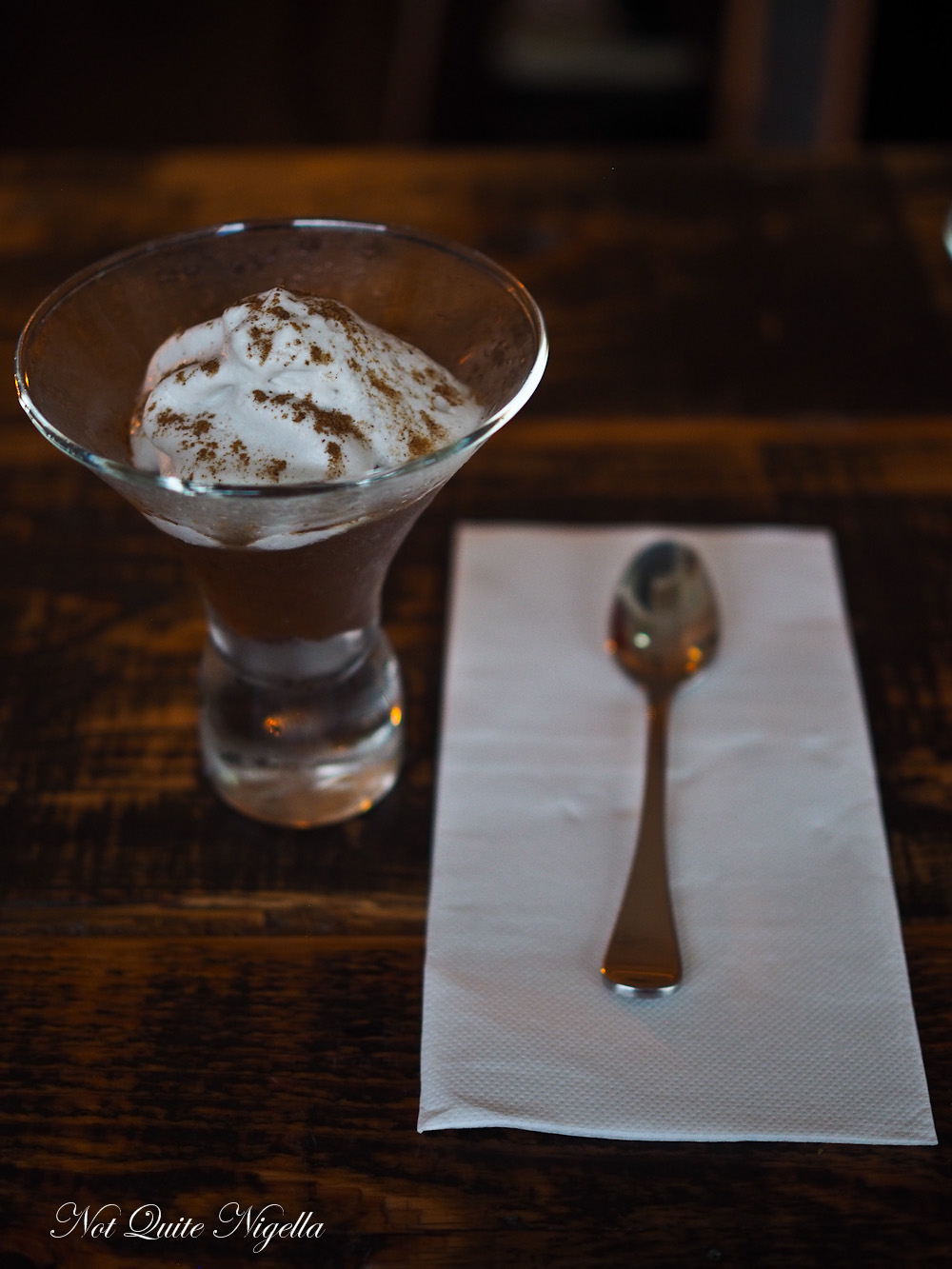 I much preferred the suspiro, said to mean, "The sigh of a Peruvian woman". With a rich, sweet and silky smooth base made with date caramel and a light coco chantilly foam it disappears in a half dozen very satisfying spoonfuls.

So tell me Dear Reader, are you a fan of raw or vegan cuisine? How often do you eat vegan or vegetarian food? What did you think of the food in this post?