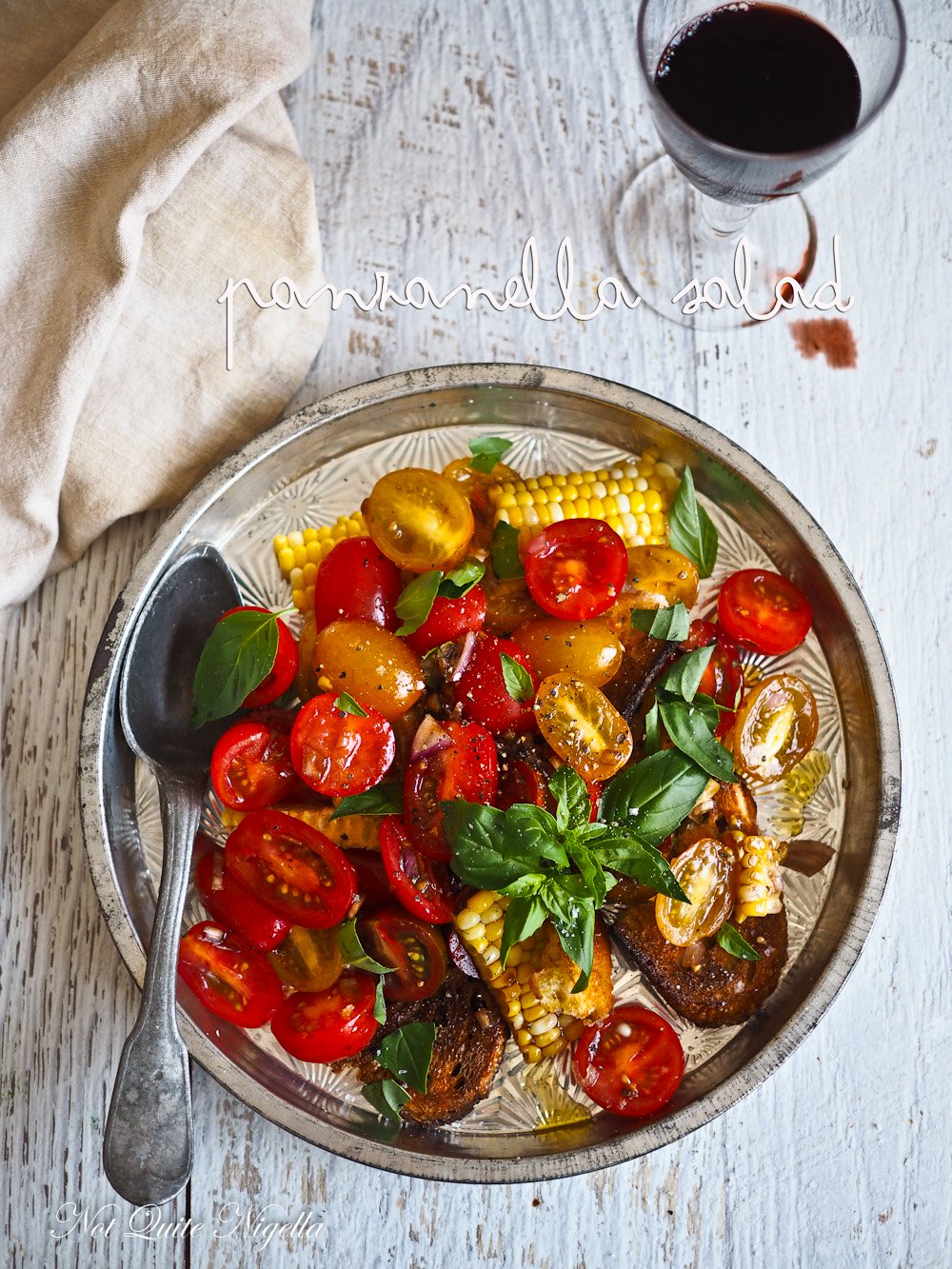 Summer is all about ripe, juicy, vividly coloured tomatoes and so far this year they've been full of flavour. They say that the best Italian food is the simplest, making use of the best produce. This version of a Panzanella or bread and tomato salad is very easy in execution, yet delivers in spades for flavour.

I hesitated even putting this down as a recipe as it didn't have a great start in life. It was made out of leftovers. I keep my tomatoes on the bench and I had accidentally covered them with some paperwork. The bread was also on the bench, a stubby end of bubbly crusted white sourdough that I had intended to make sandwiches with. I had gone so far as to slice it up but then I became distracted by something and stashed it back in the bag.

Panzanella salad is a frugal Tuscan bread salad made with tomatoes, onion and a simple dressing of oil and vinegar. Originally made with onion and no tomato it has changed over time. Bread is a staple in many Tuscan meals and panzanella (meaning "bread" and "small basket") makes use of leftovers in the same way that our Winter favourite Ribollita does. Usually the bread is soaked in water before serving but I love crunch in salads so I kept this toasted.

And then I ran out of extra virgin olive oil. Like chocolate and butter I usually monitor these ingredients making sure I never get too low in each. All I had was a lemon olive oil. I don't usually use flavoured oils because I like to control what goes into a dish but faced with only that I decided to use it. Then in went an extra cob of corn I had cooked for lunch in a pack of three. 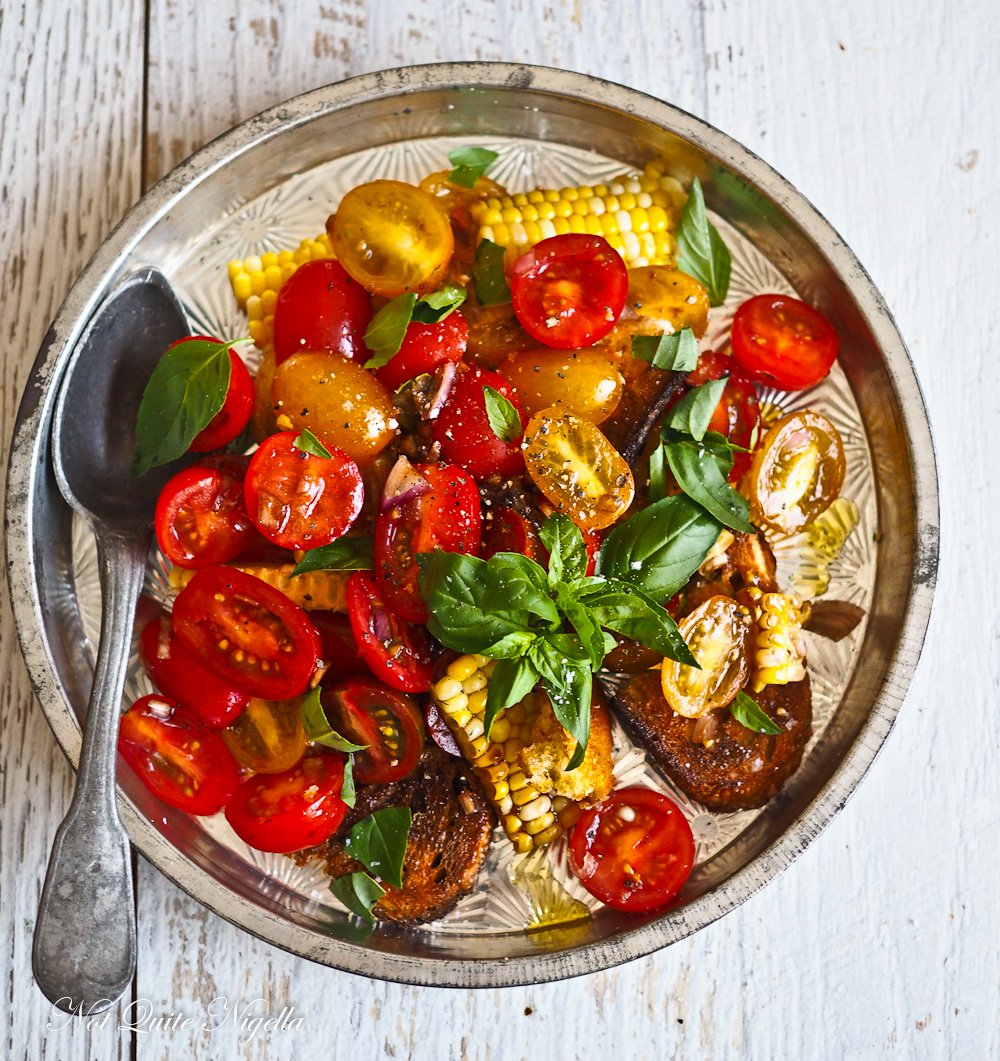 I didn't expect to love it but I fell head over heels for this salad. I'll admit there was some sort of satisfaction from using up things that I thought were either low on the desirability scale (lemon olive oil, stale bread) or forgotten items. There was even one single golden eschalot that I threw in too and what remained from a bunch of basil. But not knowing any of this, Mr NQN happily wolfed it down and asked for seconds (of which I had none alas!).

So tell me Dear Reader, do you get an odd sort of satisfaction from using up leftovers? Do you have any suggestions for using flavoured olive oils? And are there ingredients that you always make sure that you never run out of? 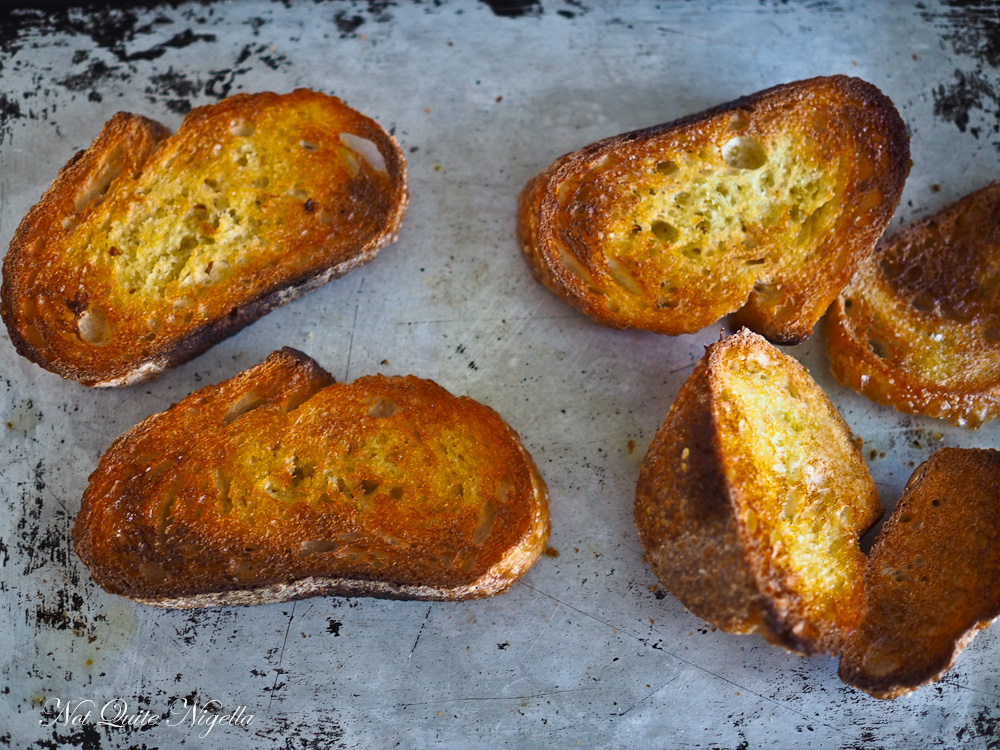 Step 1 - Brush or drizzle the bread with some of the olive oil and then toast until golden on both sides.

Step 2 - Slice tomatoes in halves (or quarters if they're large) and slice the kernels from the corn and place in a bowl. Drizzle with the balsamic and a couple of tablespoons of the olive oil and season with salt and pepper and add bread. Toss coating the tomatoes and bread well with the dressing.