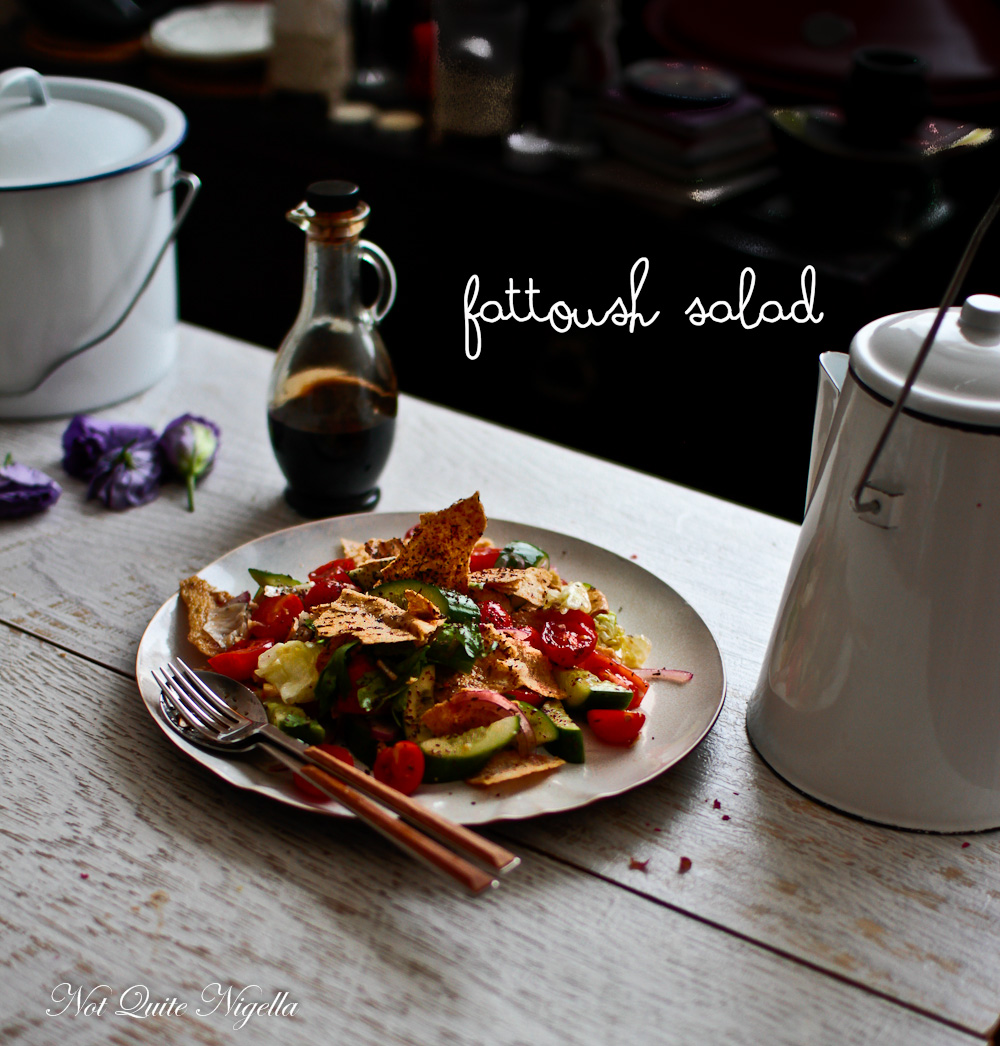 Ahh fattoush salad. That wonderful staple of the Palestine or Leventine cuisine. It is a practical and delicious recipe that makes use of seasonal vegetables and uses up any stale pita bread. The distinct flavour comes from two ingredients: sumac and pomegranate molasses. They give this dish a distinctive sweet and sour flavour.

The sweetness in a fattoush salad also comes from this summer's tomatoes. They along with figs are some of my favourite items of summer. And when a lovely reader and friend Jessica asked if I had a fattoush salad I told her that I would develop one because I adore it. The key to fattoush is the sourness from the use of one of my favourite spices called sumac. It imparts an almost lemony flavour but is more complex than that. It is also a frugal recipe that uses up stale pita bread.

Often the pita bread is deep fried but I brushed it with oil and baked it and it was still delicious. The name is based on Fatta which is the use of stale bread. The ingredients can vary somewhat according to where it is made but often it includes chunks of tomato, cucumber, radish and green onions and the dressing is made with pomegranate molasses and olive oil with a generous sprinkling of sumac. 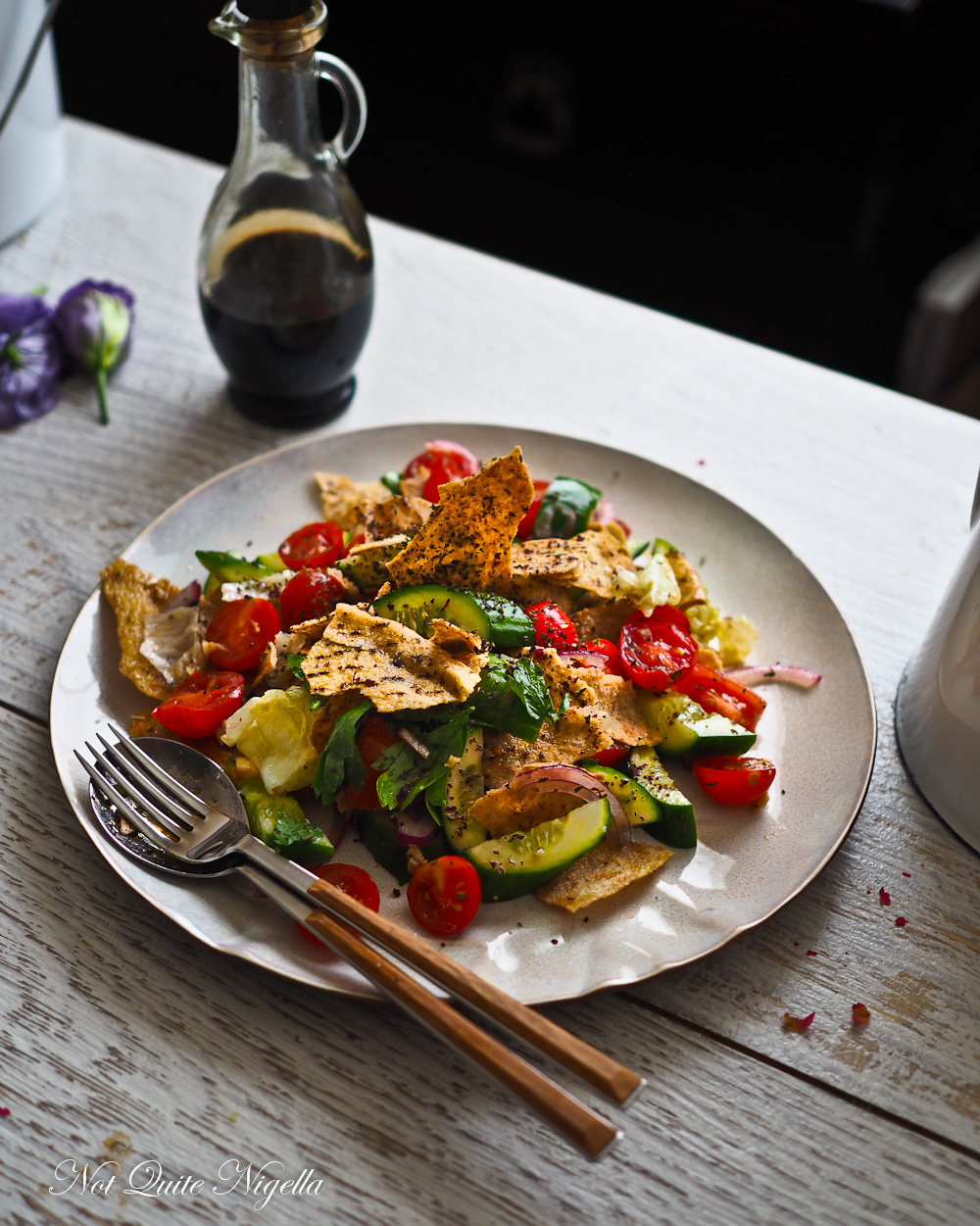 This summer I've been working on an item on my bucket list that has to do with my other favourite summer fruit: figs. I have always wanted is a fig tree. I dream of snatching a plump fig off the tree and splitting it open and devouring the jammy deep pink flesh. But a lack of a backyard and patience has meant that it is a scene I imagine occurring in about ten years' time. When maybe we have a backyard or a fig tree.

I was then told by a friend that you don't have to wait six years for fruit to arrive on your tree. You see you can buy already fruiting trees. So one afternoon we took a drive out to Dural to buy one of these trees. We found the shop called Dural Kiosk on Great Northern Road. They were very friendly and told us how to keep the fig tree alive. We left with bags of the sweetest apricots, some figs and a fig tree. I'm going to have to think of a name for her.

And we're just going to hope that we can keep her alive. Unlike my sourdough and the fresh Christmas tree that we bought (although apparently in our defence of the Christmas tree, Mr NQN researched it and potted Christmas trees are often a bit of a scam as they chop off the roots so they will inevitably die). Wish me luck!

So tell me Dear Reader, do you have any suggestions for names for my fig tree? Any gardening tips? I'll need all the help I can get as I kill things and my garden is made up entirely of cacti! What is your favourite spice?

Step 1 - Brush bread with oil on both sides and sprinkle with half of the sumac and place in a 180C/350F for 5 minutes. Leave in the oven until needed. 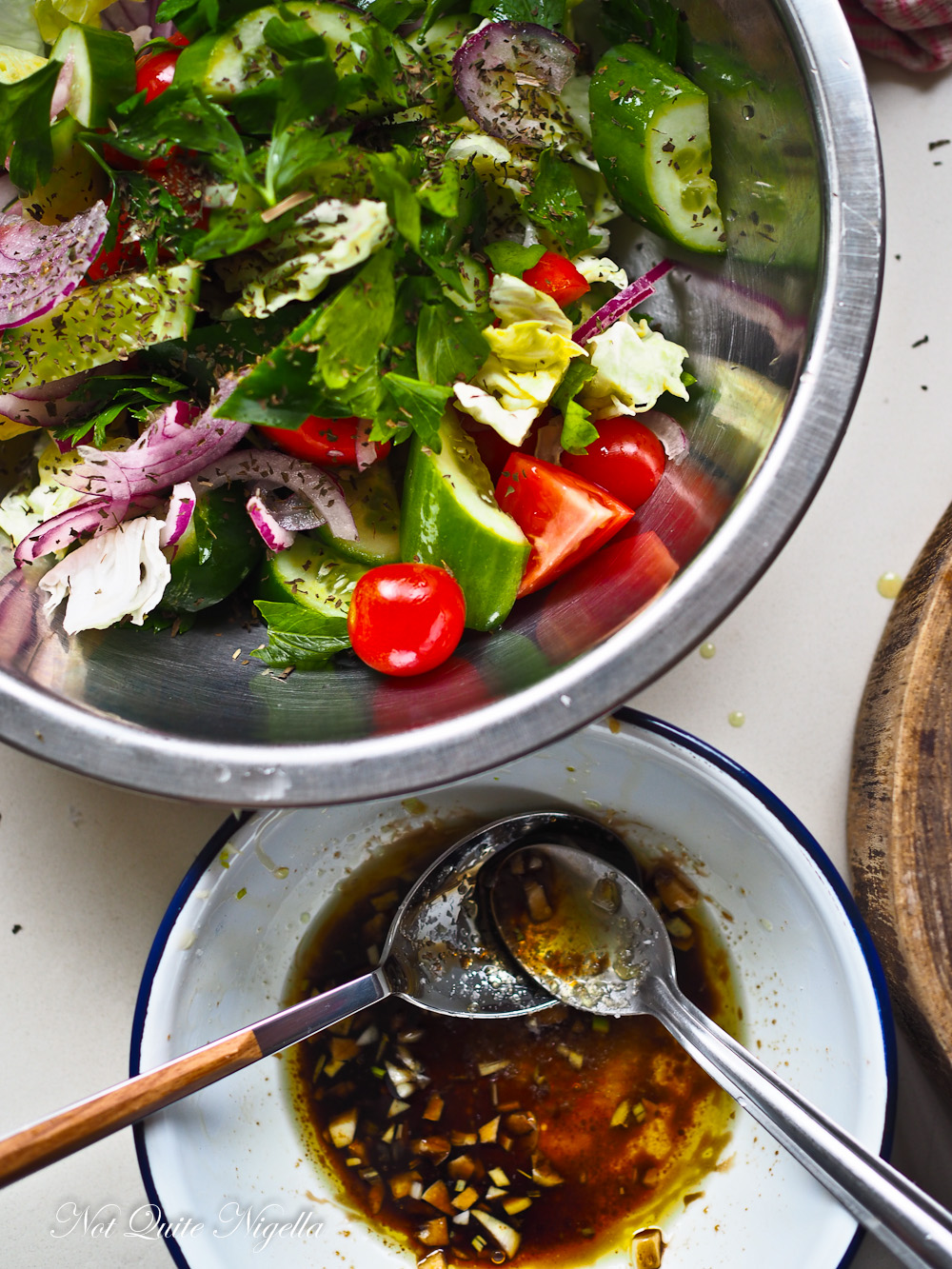 Step 2 - In a small bowl, whisk the garlic, oil, pomegranate molasses, water and honey. Season with salt and taste. Place the tomatoes, cucumber, parsley, lettuce and onion in a bowl and crumble the pita over it - it should be crunchy. Add the remainder of the sumac and the mint. Toss with the dressing, season with salt and serve.

Tip: Cut pita bread into triangles, brush with a little oil and sprinkle with sumac. They make fantastic crackers!