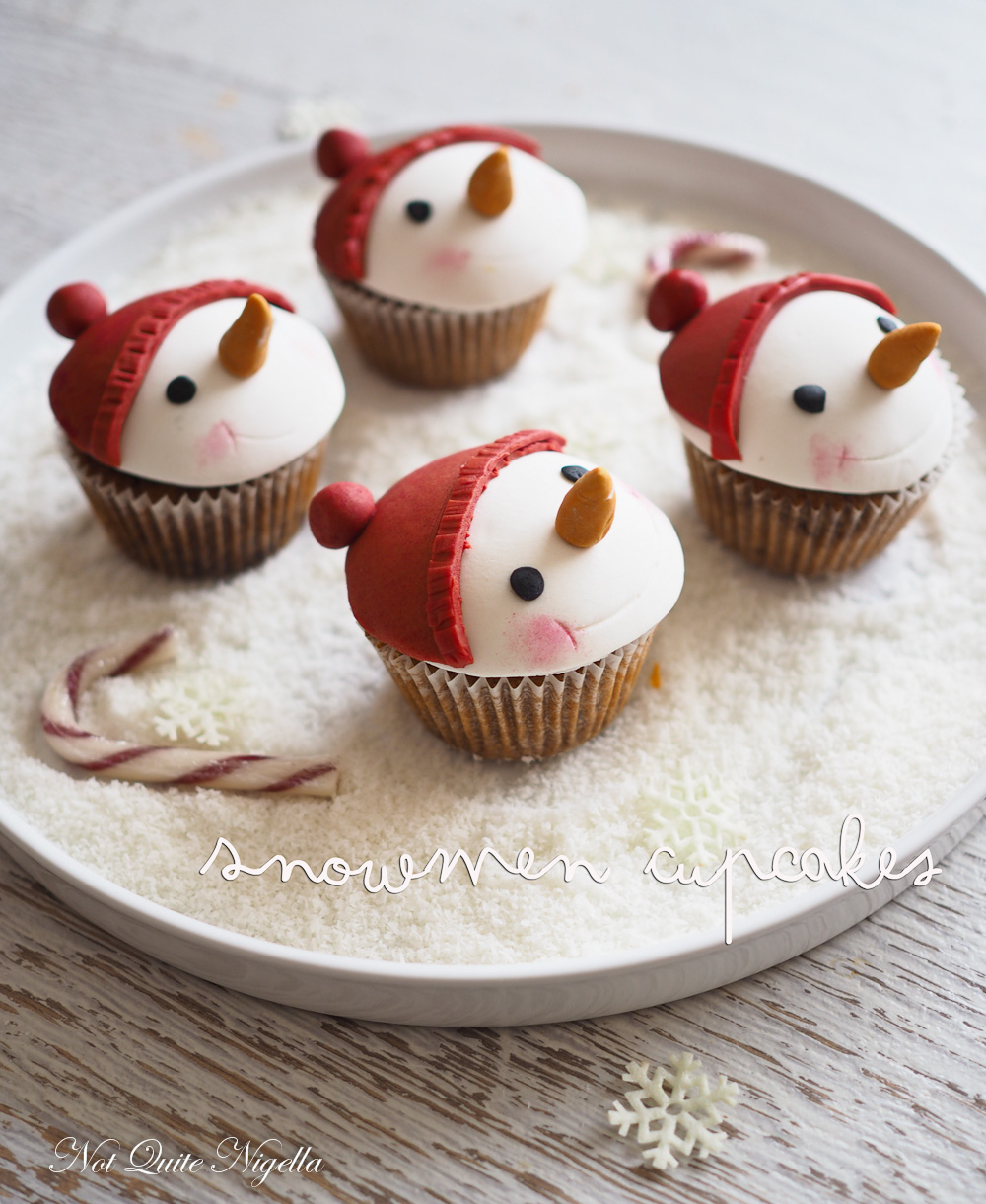 Looking for an adorable Christmas cupcake idea? These snowmen cupcakes might just fit that bill. The adorable rosy cheeked snowmen tops of these are easy to make and even kids can help out with them. Underneath the smiley exterior is hiding a gingerbread cupcake rich in candied ginger pieces and topped with a delectable cinnamon cream cheese icing.

With just five days until Christmas, these snowmen cupcakes will definitely put you in the mood. Even if it is 30°C/86°F outside which is more likely than snow here in Sydney. This design can also be easily made into penguins. Just replace the red beanie with a black widow's peak and use a small triangle of yellow for the nose. In this cupcake we use gum paste which sets faster and we also make us of foam domes that give you the perfect dome shape every time. I decided to take these snowmen to my parent's house.

Every now and then Mr NQN and I go over to see my parents for dinner There's a little routine that precedes our visits. My parents like to at at 4pm and Mr NQN can't finish work until 6pm which means that he doesn't get home until 6:30pm. So every time we go over my mother says, "See you at 6pm" and I say, "See you at 6:30pm". 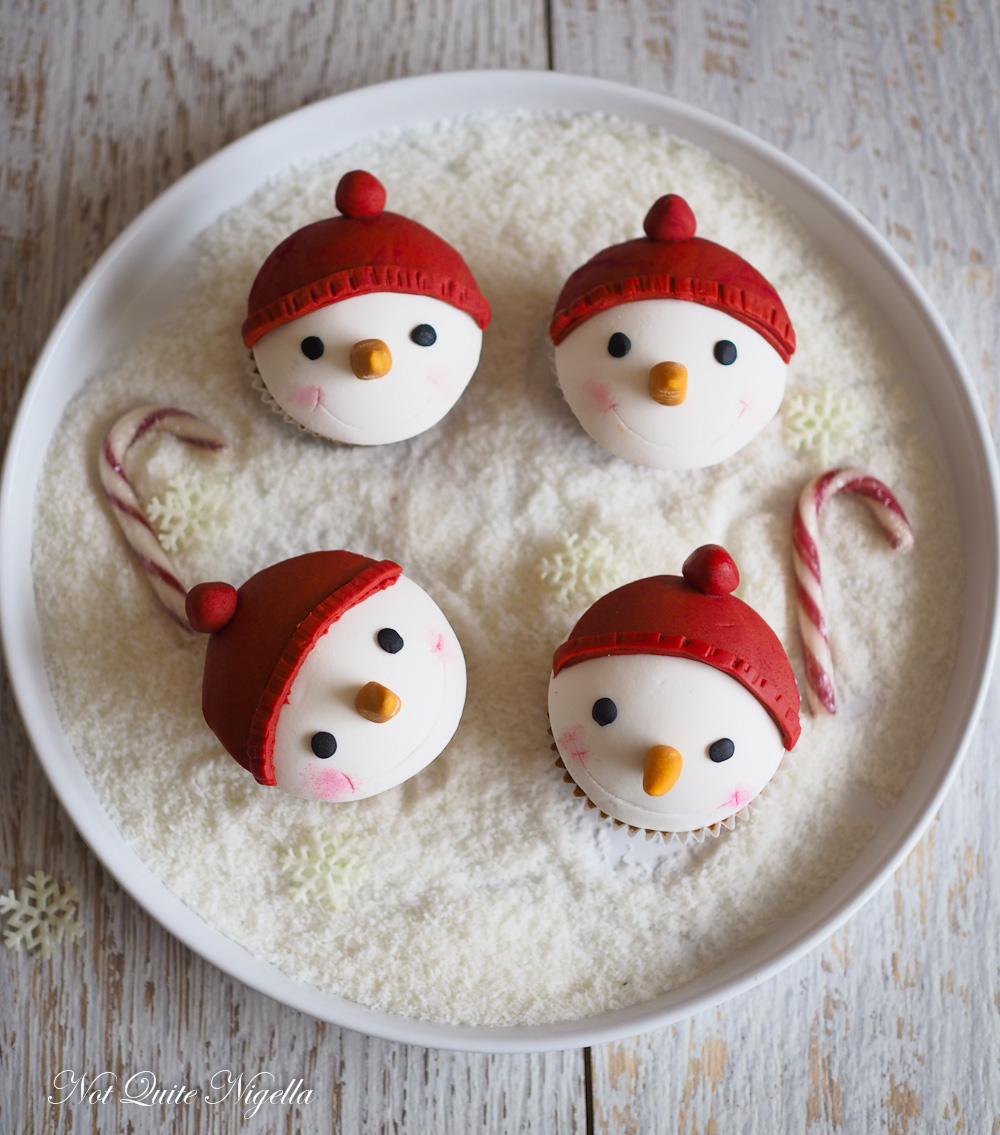 As time goes on they get more eccentric and cheeky. Despite the fact that they're retired, they keep really busy with activities and the time available to see them is restricted even further by my father's earlier and earlier sleeping pattern. It was 7pm and he was about to get ready for bed. So we brought out dessert which is what we usually bring when we go over for dinner. It was these snowmen cupcakes.

I thought I had done a good job of the snowmen cupcakes but then again maybe I hadn't. But it's the fun that counts right? I really enjoyed making these because they came together so quickly. If you're starting off with fondant, most of it is really rolling out fondant flat and then cutting it out. The rest is fairly basic shaping and the effect of these sweet cheeked snowmen is very cute I promise. Even if they do get mistaken for Pinocchio!

Video: How to make Snowman Cupcakes!

Because we were encroaching on his sleep time we left after finishing the cupcakes. As we were leaving my father offered us a gift. It was a BMW bag, a bag that we had bought him when he owned one. "Father, we gave that to you!" He giggled and said, "Well do you still want it?"

So tell me Dear Reader, do you ever forget who gives you gifts? Have your sleeping patterns changed over the years? And do you like gingerbread? 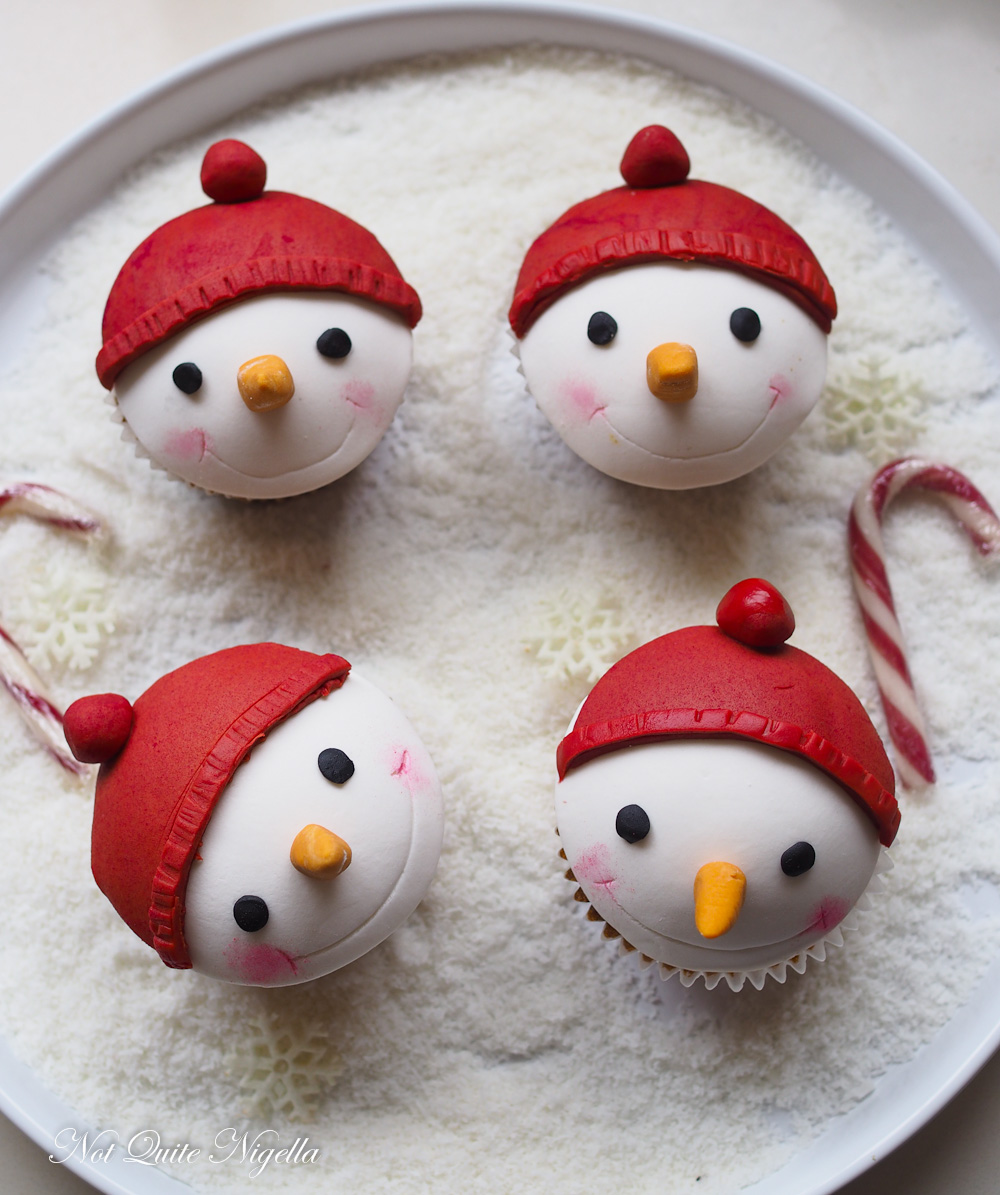 Note: gum paste dries quicker than fondant so we use it here to ensure that the snowmen's faces are ready in time for the cupcakes.

*To make 1 cup of cake flour, place 2 tablespoons of cornflour/cornstarch in a measuring jug and then fill with plain all purpose flour.

Step 1 - Make the snowmen first. Sprinkle some cornflour/cornstarch onto a non stick board Roll out the white gum paste using the rolling pin. Cut out 12 white circles using a round cutter. Carefully place on the centre of the foam half sphere molds. 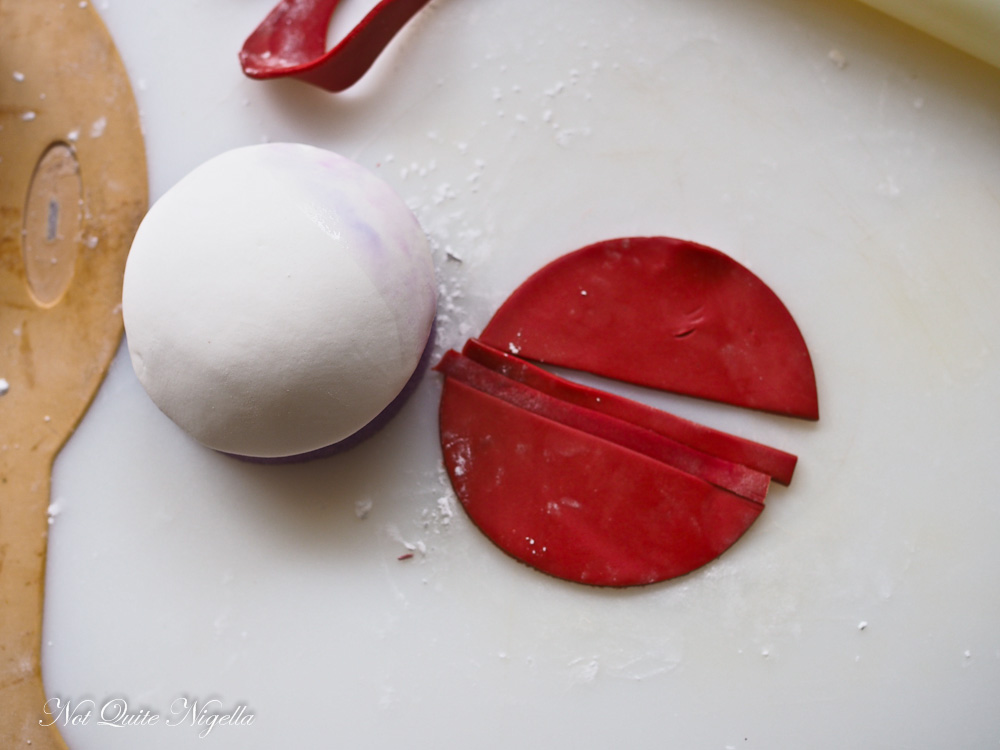 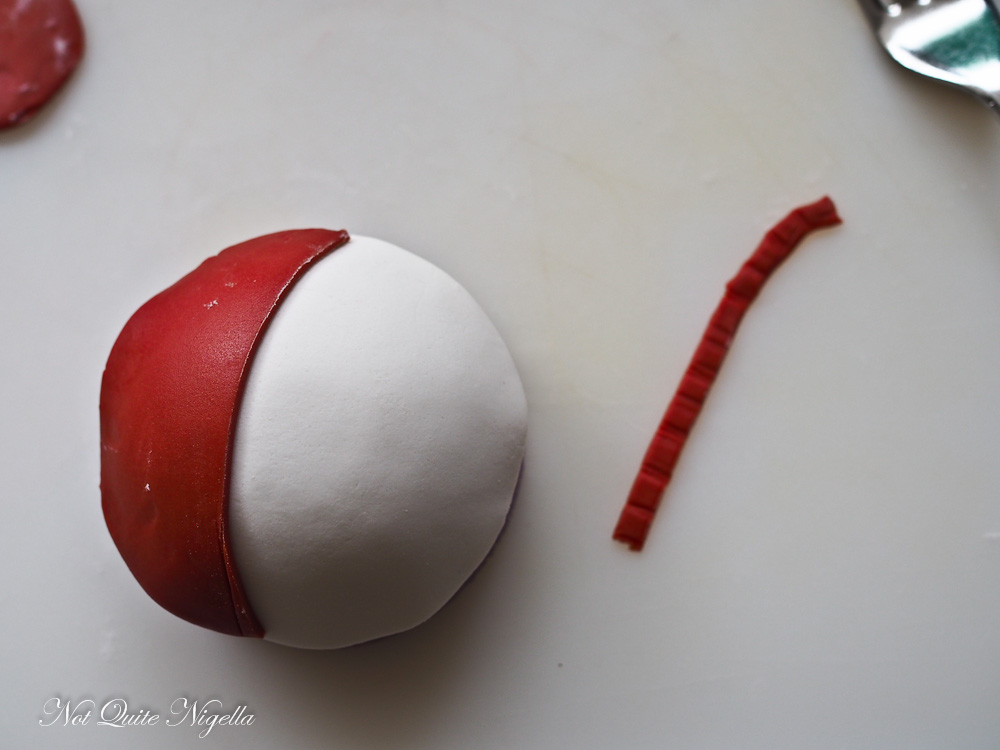 Step 2 - Roll out the red gum paste and using the same cutter, cut out 6 rounds. Cut each round in half and then cut a small 1/4 inch section off at the end. That will be the ribbed end of the snowman's beanie. Using a slightly wet paintbrush, adhere the beanie to the white dome (the face) and then add the little strip. Gently press down on the strip with the tines of a fork. Then roll a little red ball of gum paste and stick it onto the beanie as a pom pom. 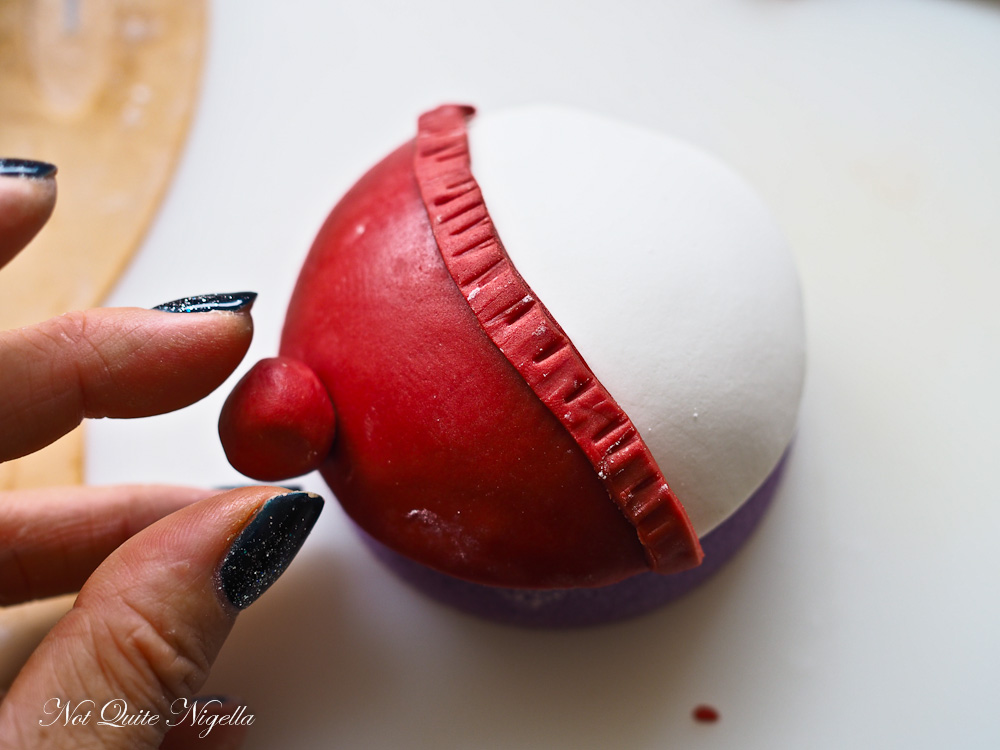 Step 3 - Roll out small balls of orange gum paste to make a narrow end to make the carrot nose. I use the toothpick to draw little lines on the carrots. Stick this to the face using a little water on the end of a paintbrush. 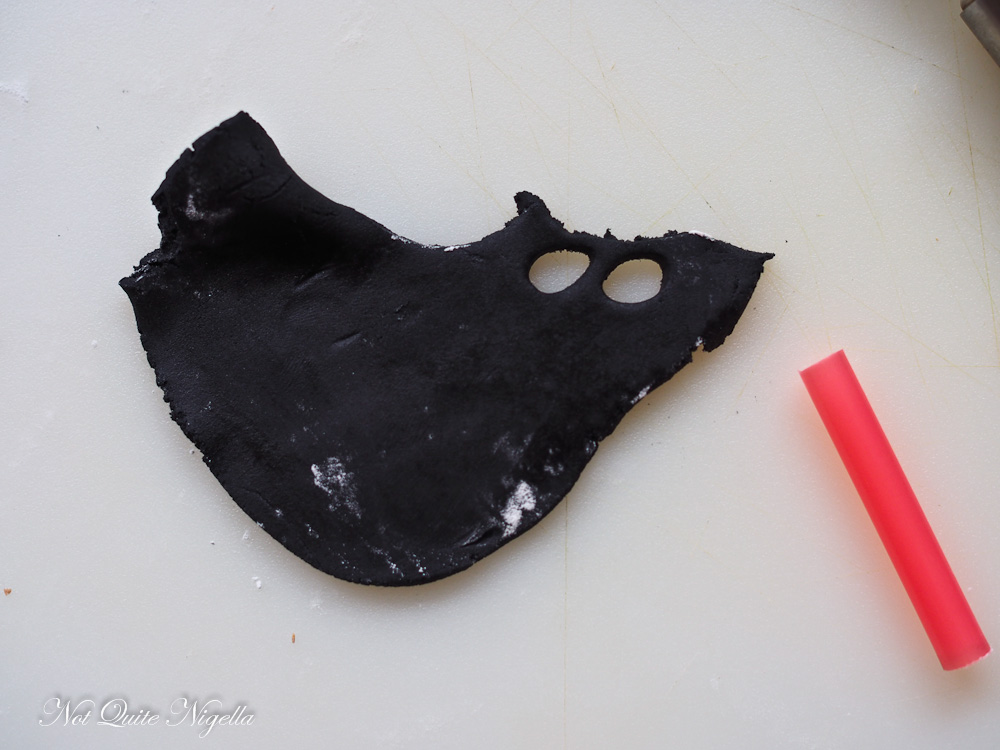 Step 4 - Roll out the black gum paste. Cut an inch off a plastic straw or a very tiny cutter and cut out the eyes. Stick these to the face with water too. Then take a toothpick and draw a wide smile and using a dry brush, draw some blushing cheeks. Allow to set completely. 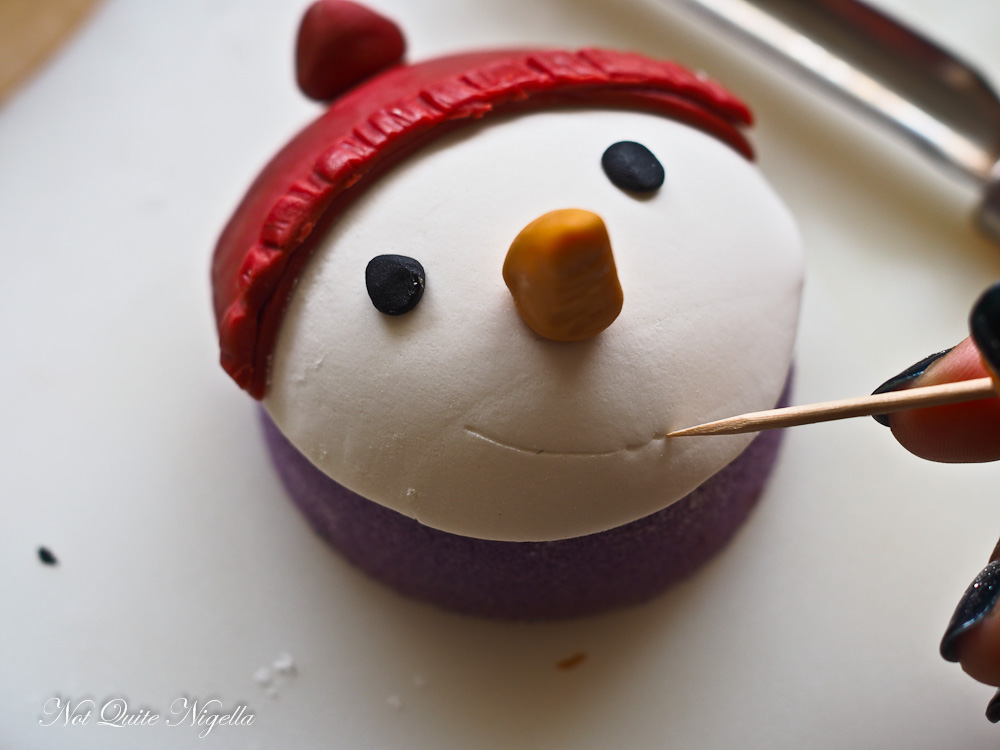 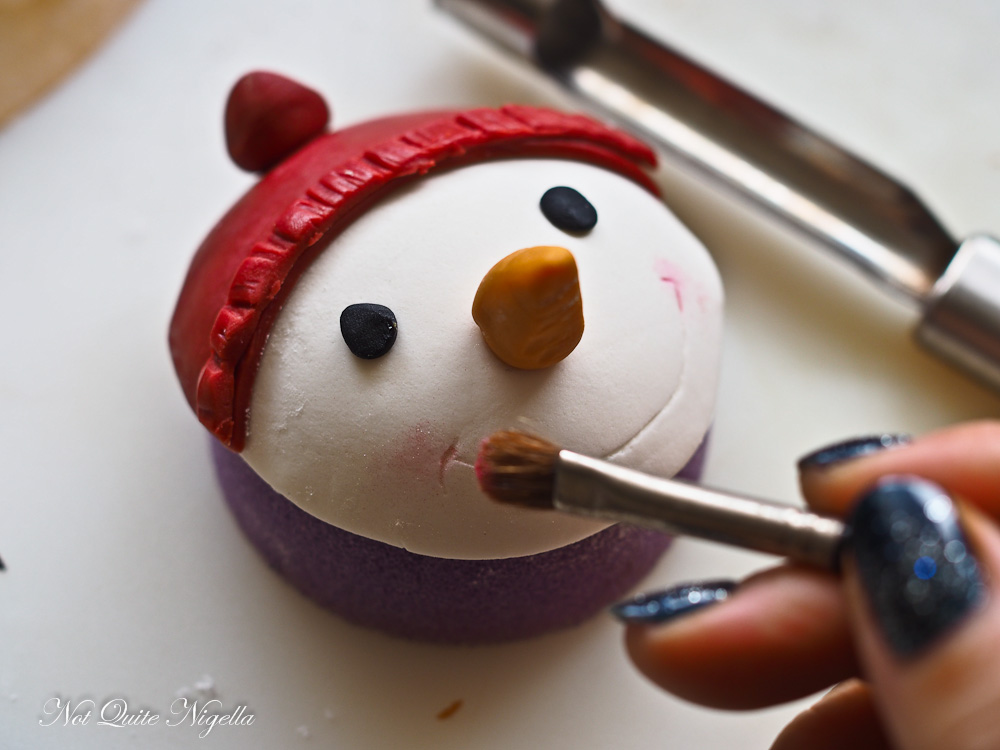 Step 5 - Line a cupcake tray with liners and preheat oven to 160C/320F. Beat the butter, brown sugar and molasses together until pale and then beat in eggs one at a time until smooth. Measure the flour, baking powder, ginger, alllspice, cinnamon and nutmeg and whisk to combine. On low speed add the flour mixture. Then add the ginger pieces. Use an ice cream scoop to divide the mixture between the cupcakes. Bake for 20-25 minutes until a skewer inserted comes out clean.

Step 6 - Beat the cream cheese, butter icing sugar and cinnamon until fluffy and white - about 5-7 minutes. Pipe onto cooled cupcakes and then lift the snowmen faces onto the frosting and it will attach using the frosting. Cream cheese frosting does need to be refrigerated and fondant doesn't refrigerate well so if you are serving them at a later time, put the faces on just before you serve it and keep the cupcakes in the fridge. Or you can use a buttercream which doesn't need to be refrigerated.