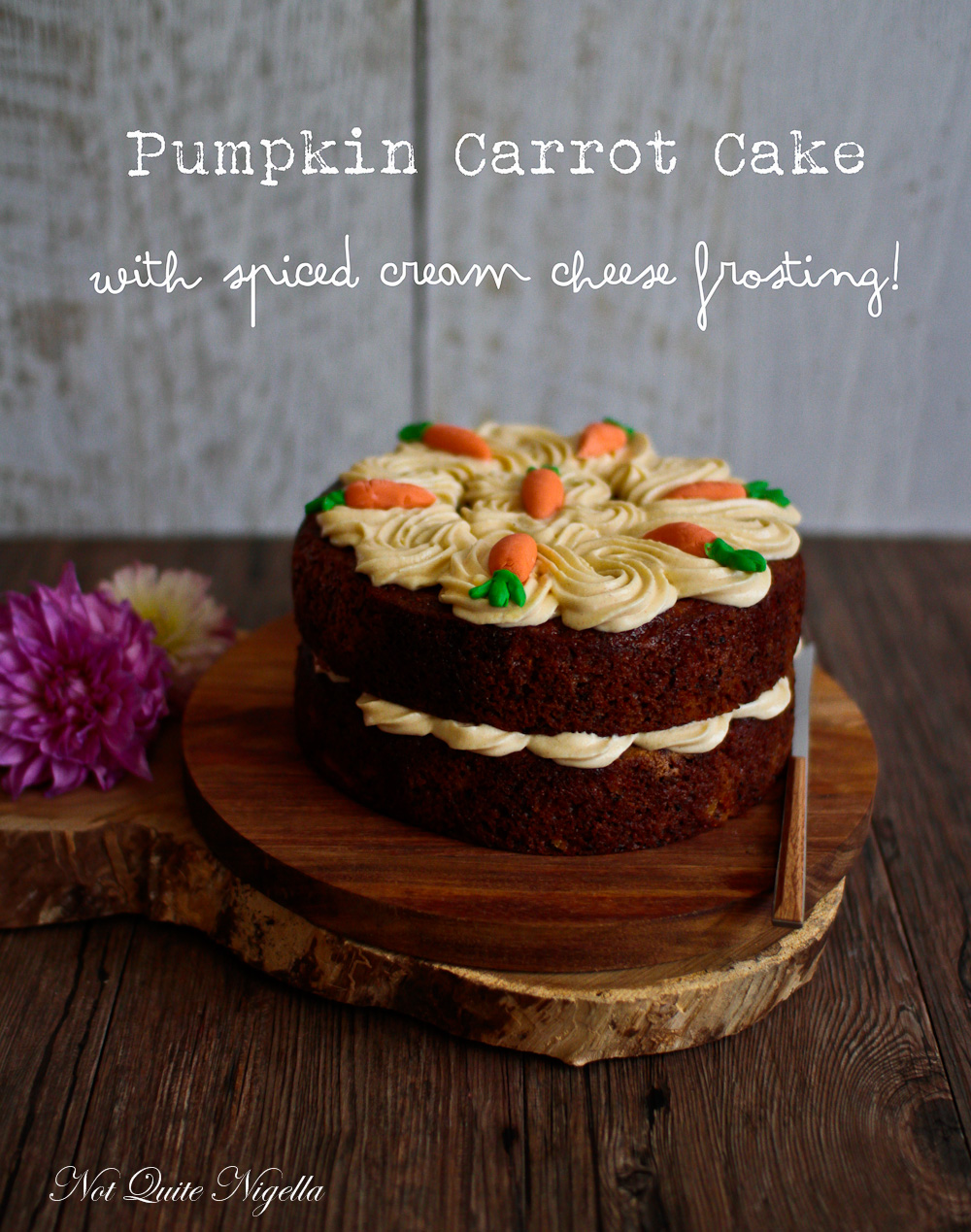 One of the reasons why carrot cake is so popular is because of its moist, tender texture. But I wondered what would happen if you added pumpkin to carrot cake? After all pumpkin pie shares some of the same spices as carrot cake (cinnamon, nutmeg, allspice). What would pumpkin do the texture of a carrot cake? Well it turns out, it makes it even better than you could ever dream up, especially when you use the little baking hack I discovered last year to create super moist cakes...

The idea came to me a few months ago. I had some extra pumpkin left over and I stashed it in the freezer. Vegetables bake up beautifully in cakes because they add so much moistness (I know I'm using that word a lot, sorry). I wondered how pumpkin would go in a carrot cake which is already super moist. I decided to try and bake it using the same method as the very best banana cake in the world recipe.

This method involves baking a cake at a very low temperature of 135°C or 275°F for a long time. Edges of cakes are usually a bit dry while the centre of a cake are tender and moist. This method ensures that the entire cake is uniformly moist and there are absolutely no dry bits. I am now convinced there is no other way to bake cakes (except sponges and cakes that require higher heat to rise). You never know until you try something and the worst that can happen is that you can fail.

I sometimes try very hard but fail at things. Like when we were recently dining at Noma Sydney. I was taking copious notes because you can bet that when we pay that much for a meal I'm going to blog the hell out of it ;). One of their Italian chefs came over and explained a dish to us in his charming but slightly thick accent. I'm usually fairly fine with understanding accents but he was also standing at the other end of the table. He described a sauce and it sounded like "Agricole". I had no idea what that was but upon tasting it, it was velvety smooth.

"It tastes like egg yolk to me," I said to Viggo who nodded. It did to him too.

Determined to get to the bottom of the mystery sauce we asked the chef again who repeated something like "Agricole" which was a word in relation to rum as far as I knew. "Could you please spell it for me?" I said. He looked a touch confused and then slowly said,

"E. G. G. Y. O. L. K." We (or really I was) of course were hugely embarrassed. Fortunately he saw the humour in it and didn't roll his eyes at us although he may have gone back to the kitchen and laughed about the guests that didn't know how to spell egg yolk. 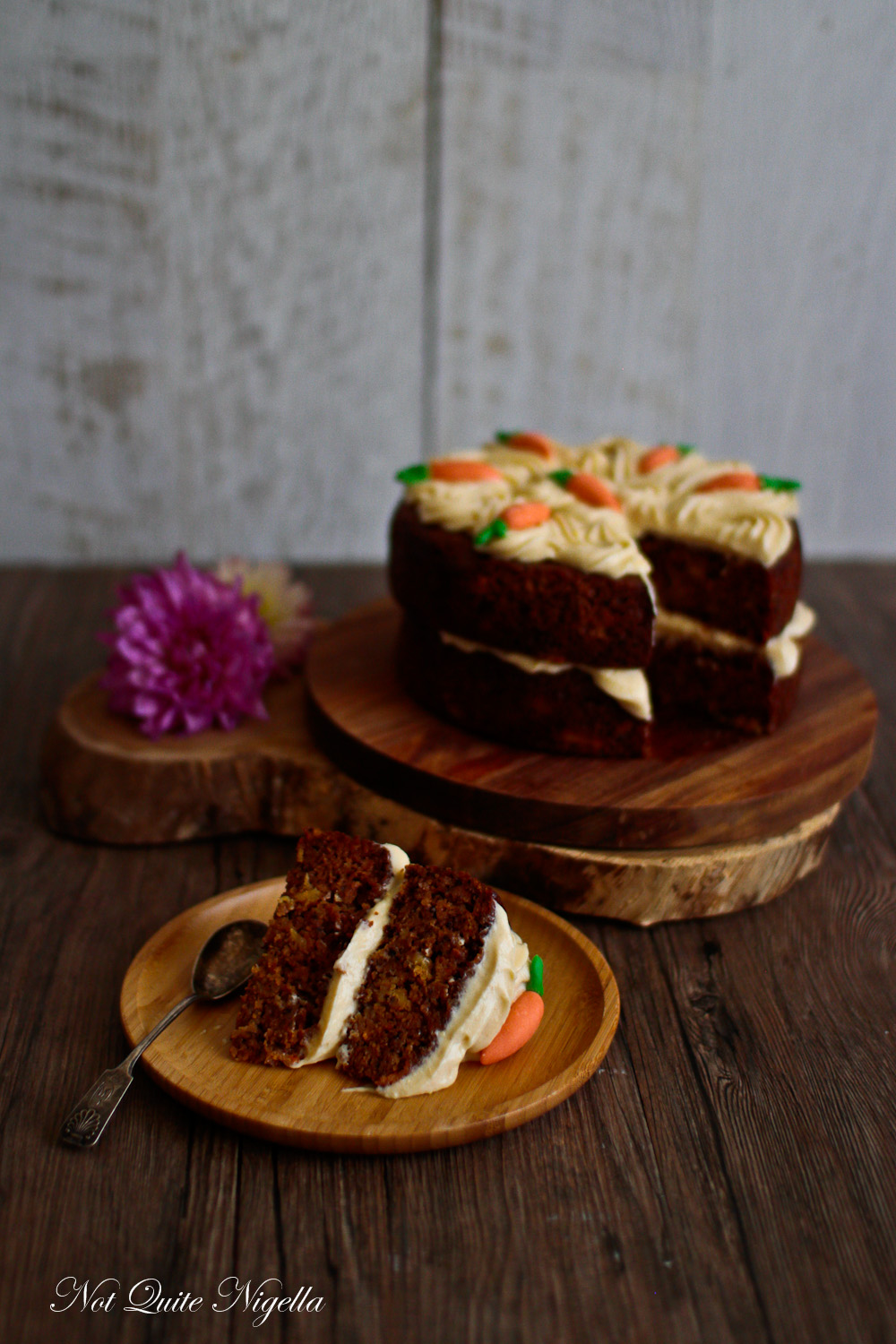 So I really meant well when I brought the lovely ladies that do my eyelashes at Lady Lash a cake. I've been going to the Newtown salon (not sponsored!) for about four years now. And I've never brought them anything that I've baked. And Dear Reader, I like to bring people food. So I decided to bring them this pumpkin carrot cake.

Alas on that day it was so hot that the cake pretty much melted in the car even with air conditioning on. I made the mistake of cutting it up into slices just in case they didn't have a big knife in the salon but it looked like it had exploded when I opened it up. I decided to spice up the cream cheese frosting by adding cinnamon and nutmeg and you know what? It's amazing. Don't take my word for it. Please make this cake. Not because I am a complete ditz and can't understand what egg yolk is but because I'm telling you, this cake is heaven. I decided to call her Hermione.

So tell me Dear Reader, have you ever tried this method of baking a cake at a very low temperature? Are you good at understanding people when they speak with accents? Do you add vegetables in your cakes very much? And what was the last cake you made?

Step 1 - Line 2x 20c./8inch round pan on the base and sides. Preheat oven to 135C/275F (not a typo, this is a low heat). Whisk the sugar, flour, baking powder, baking soda, spices and salt together in a large bowl. In a jug whisk the buttermilk, oil and eggs. Have the remainder of the ingredients ready. 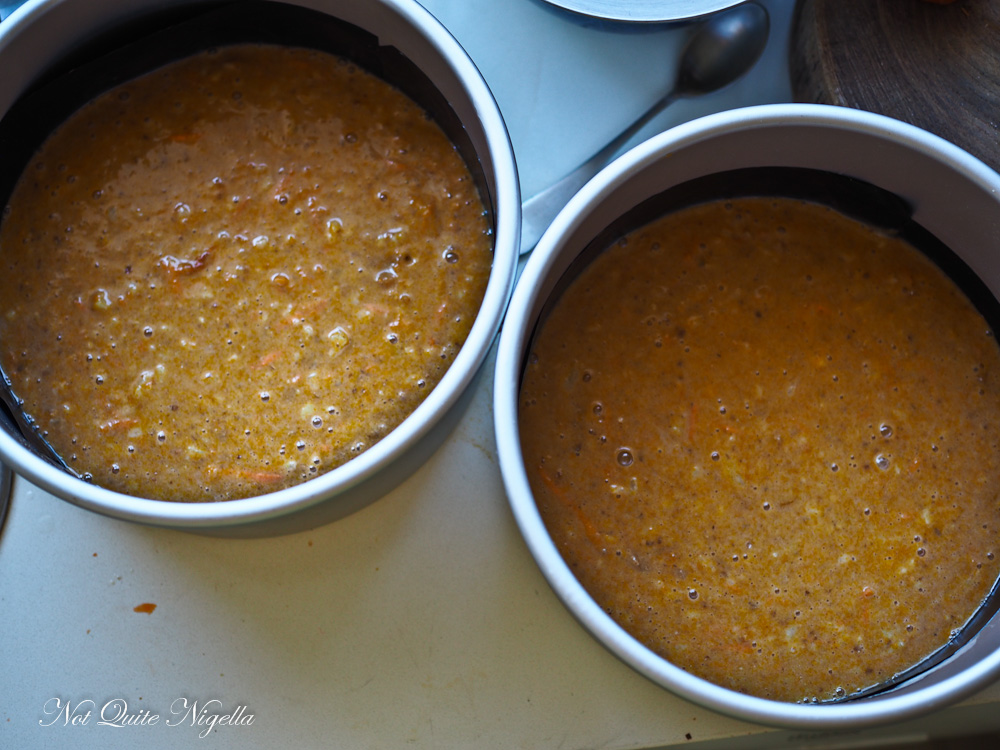 Step 2 - Make a well in the dry ingredients and add the wet mixture. Halfway through mixing the wet ingredients, all the pineapple, pecans, carrot and pumpkin and stir until just combined. You don't want to overwork the mixture. Scoop into the two prepared tins and bake for 1 hour until a skewer inserted comes out clean. 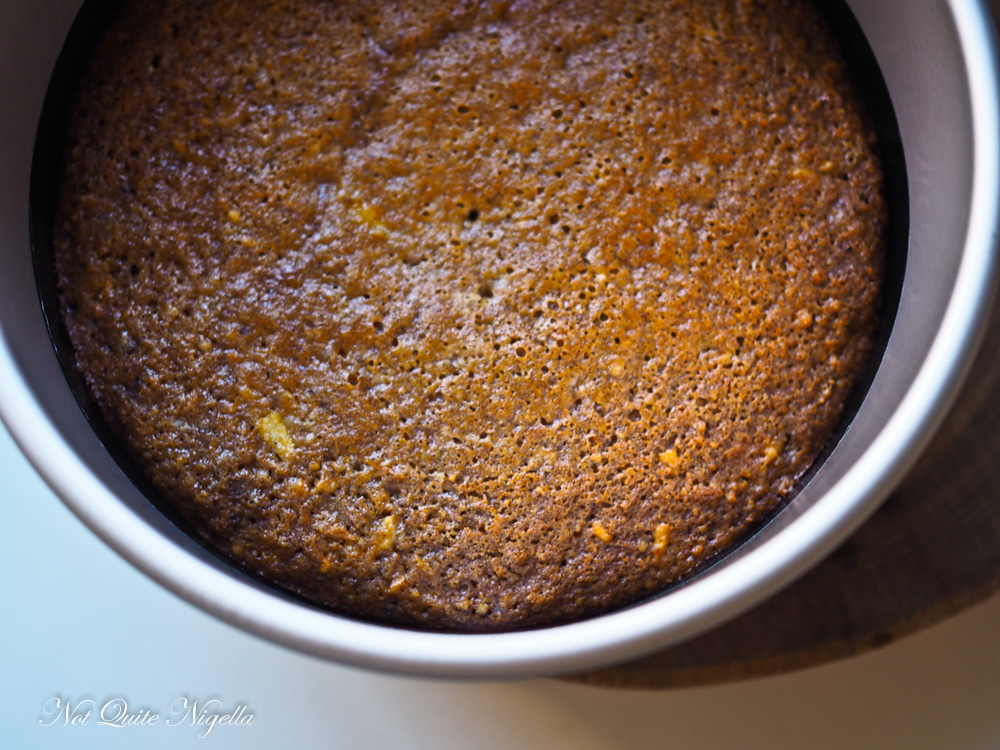 Step 3 - At this point, you can completely cool then adn wrap and freeze them until you need them. Freezing them also makes decorating them easier. 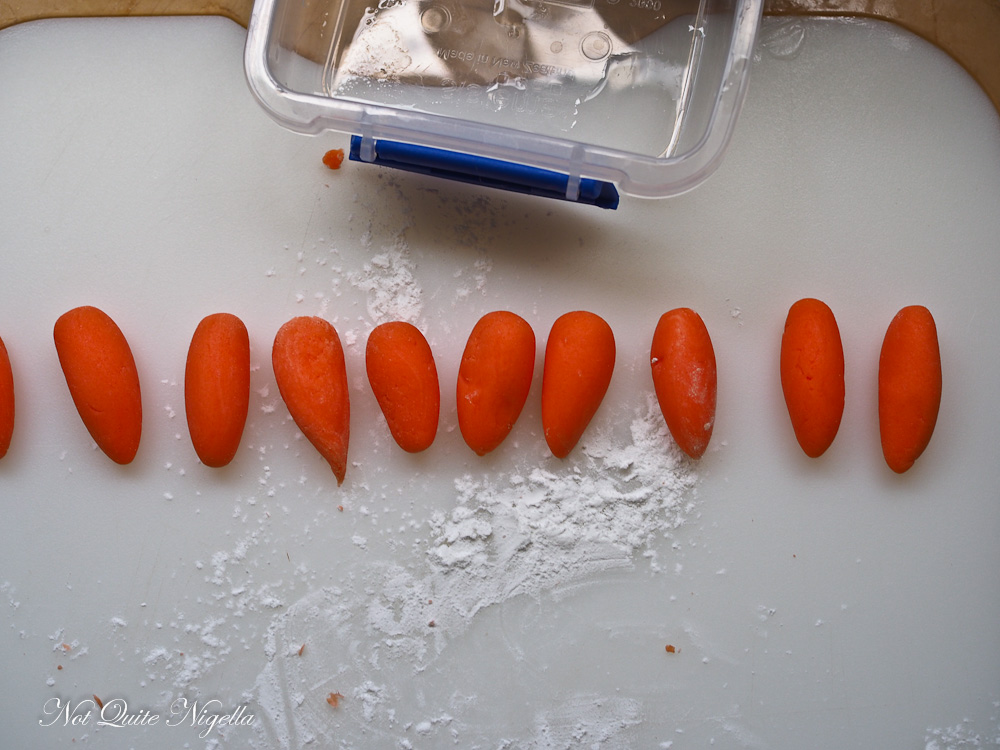 Step 4 - Shape the carrots by rolling out 8 balls around the size of large peas. Roll them between your hands using this method of creating a pointXXX. Roll eight very small green balls and press the down. Using a pair of scissors, make two cuts to create the tops. Dab a little water on the end of the carrot and attach the greens. 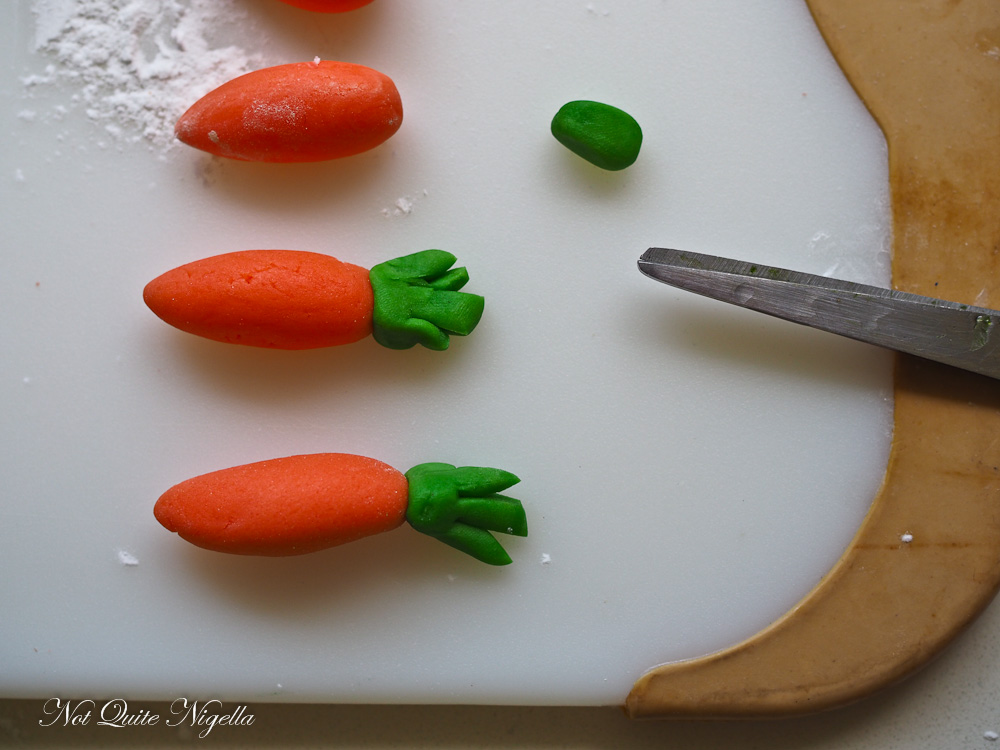 Step 5 - Make the cream cheese frosting by beating the butter, cream cheese in a bowl with electric mixer until light and fluffy. Gradually beat in icing sugar and spices.

Step 6 - Fit a piping bag with a large star nozzle and fill with the frosting. Place one cake layer on a serving plate and pipe frosting in a pattern as shown. Place the next layer on top and then pipe icing on this layer too and then decorate with the fondant carrots.