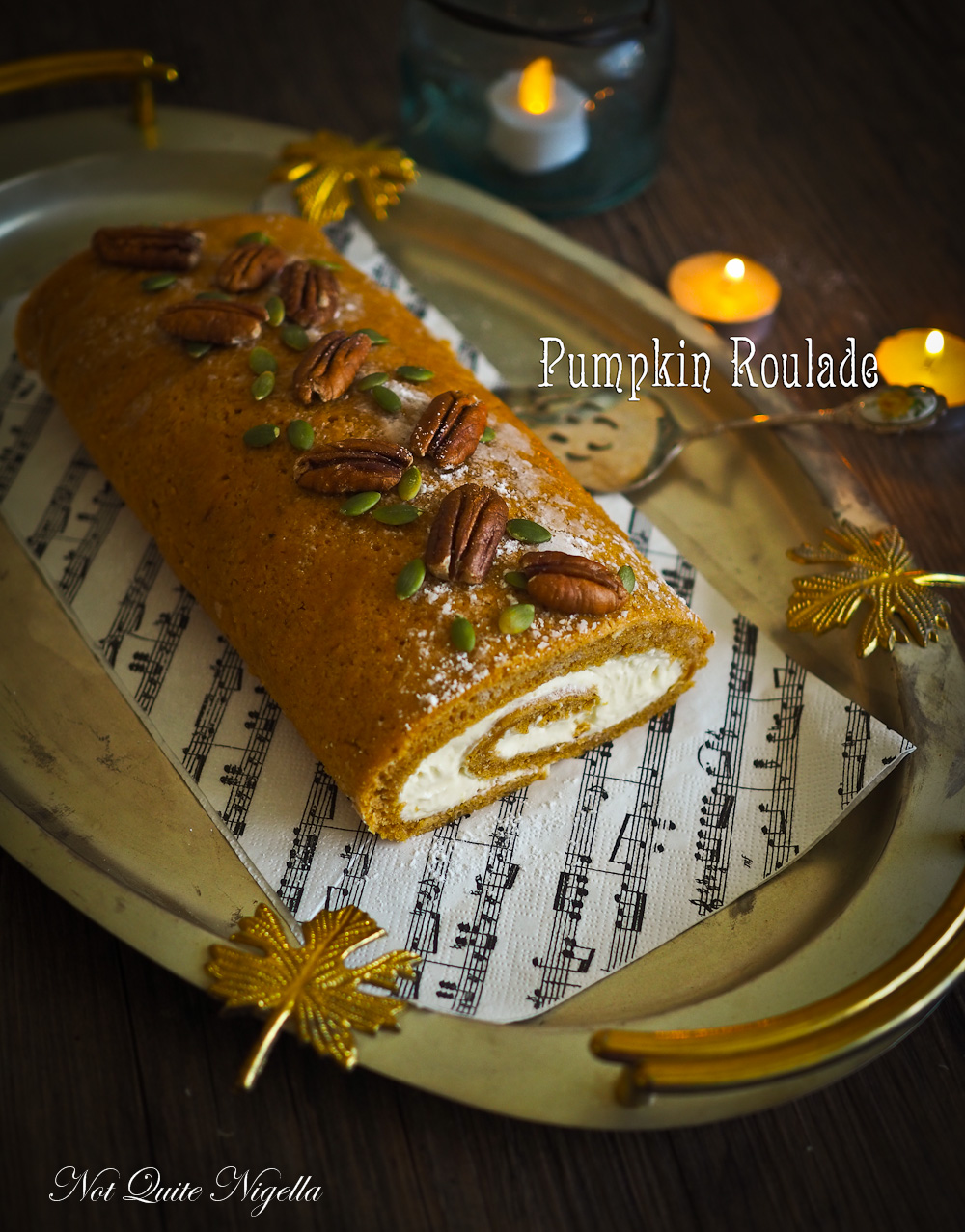 This pumpkin roulade cake is a light, creamy sponge roll filled with spiced cream cheese and mascarpone. The wonderful thing about roulades is that they look like a lot of trouble but really aren't. They bake quickly but look festive and rather magical!

It took me a few goes to get this roulade just right. I originally wanted to do a gluten free version. While it was delicious, the roll didn't quite roll up properly which is always my fear with these Swiss rolls. Another roll wasn't soft enough to maintain the curve of the roll but the final one was juuust right, just like Goldilocks' porridge.

While we don't celebrate Thanksgiving here in Australia, I will literally use every excuse I have to celebrate something. 30 day relationship anniversary? You need a dessert! Two desserts! Three? No problem! 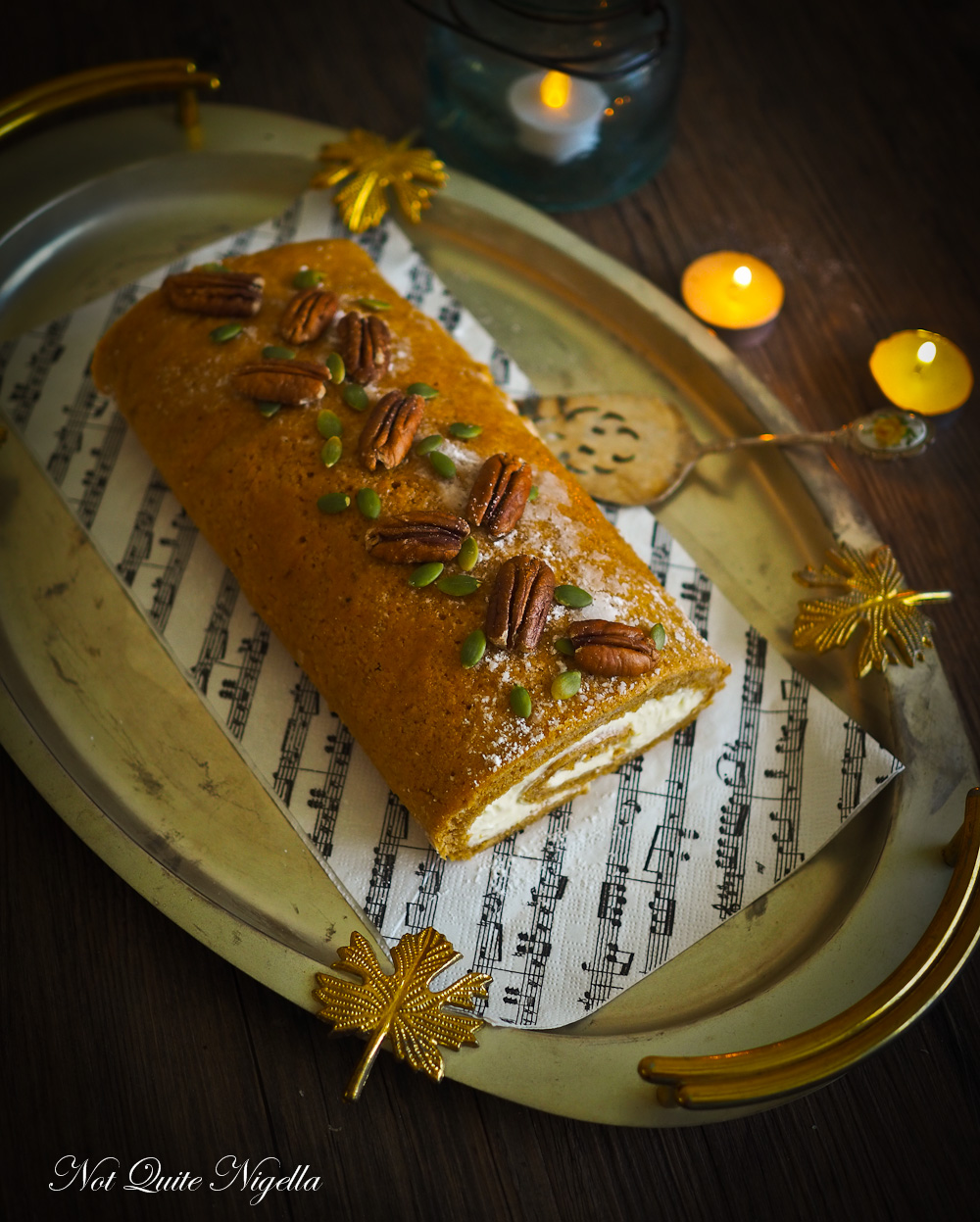 We recently solved a little problem we had with our little dog Mochi. We've had her for almost a year now and she has transformed into a different dog. Gone is the shaking, quivering, shy girl. Now she happily greets everyone that she meets and enters a room with confidence. But with confidence came a problem.

Barking at other dogs.

Sometimes when we would see a dog, she would run towards it barking. Most of the time the dogs wouldn't react, they'd look curiously at this tiny, white, noisy fluffball. One time a dog bit her on the nose (nothing serious) while another time a mad little pomeranian who lives near us barked maniacally which caused Mochi to retreat.

I was at afternoon tea with Mochi when I mentioned this to Alyson and she said that Mochi was feeling anxious about a situation, like she felt that we didn't have control of it. She has a dog called Hamish and he regularly goes in for obedience training and she had learnt this from the trainer. I was of course slightly offended (haha!) as we of course thought we had all situations under control but I realised that she was perhaps right.

We started walking in front of her and instead of seeing other dogs and hoping that she wouldn't see them, we would acknowledge them. It was amazing. She didn't bark at all. Miss America who has owned dogs explained that dogs need a pack leader, it doesn't matter who it is but they need someone that is taking care of the pack. And when she was walking out in front and thought that we hadn't seen the dogs, she was assuming that job. She never barked at another dog unprovoked again once we had her walking behind us!

So tell me Dear Reader, how many times do you try a recipe before you give up? And do you use any excuse to make food? Will you be doing anything for Thanksgiving? 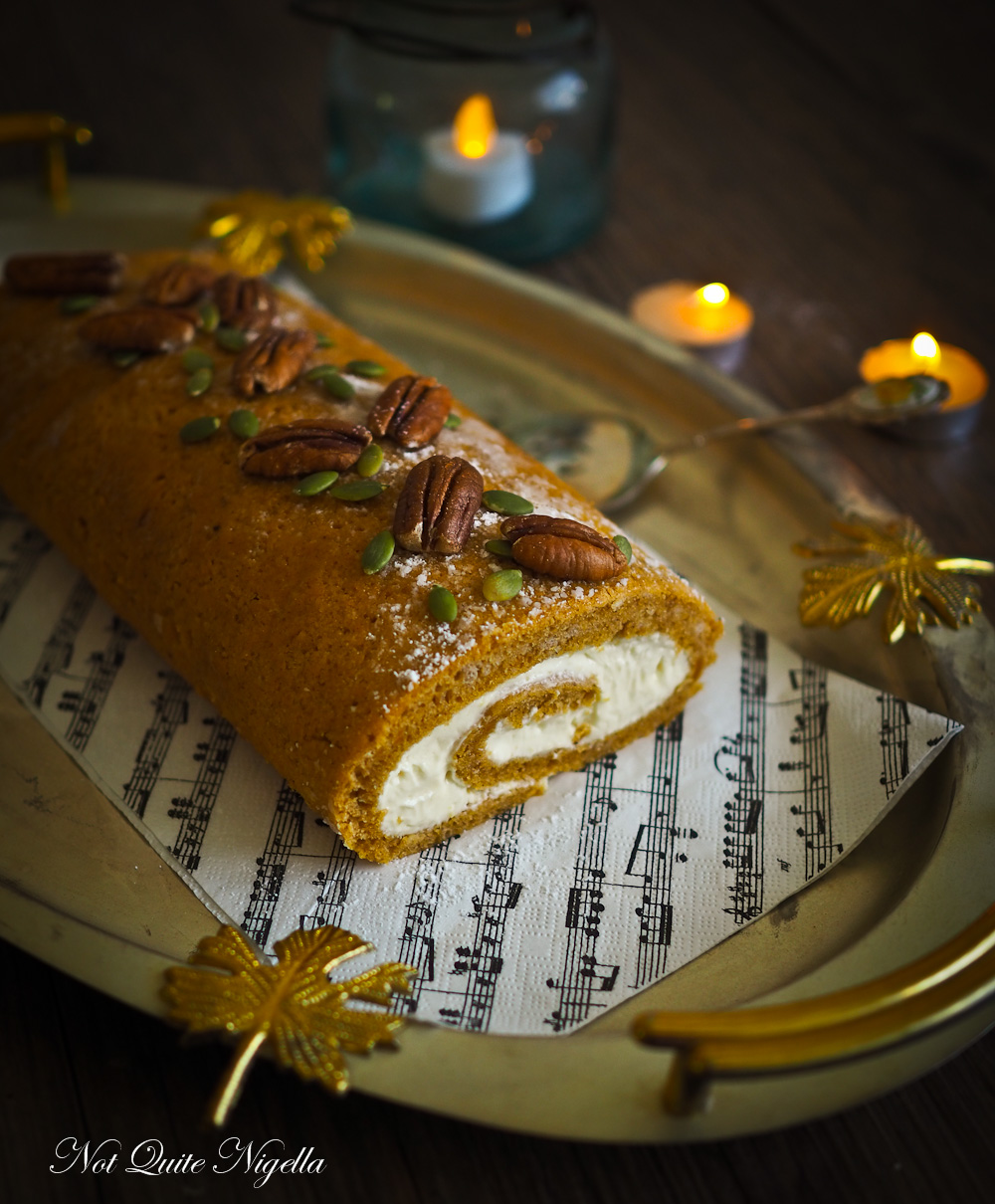 Step 1 - Preheat oven to 190C/380F. Line a large Swiss roll tin (37x25cms) with parchment and spray the top of the parchment with non stick oil too. Whisk the flour, baking powder, gingerbread spices, cinnamon and salt together in a bowl. In another bowl whisk the eggs and caster sugar together until light and fluffy. Whisk in the pumpkin. 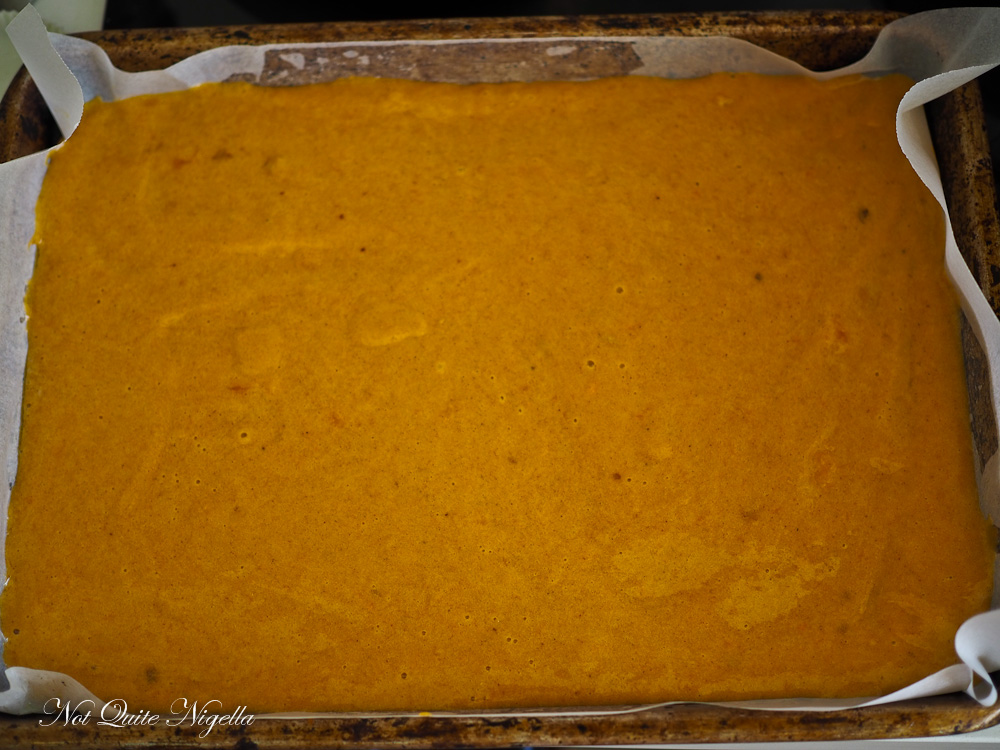 Step 2 - Make a well in the centre of the flour mixture and gradually add in the pumpkin mixture stirring to get rid of any lumps. It's quite a liquidy mixture. Spoon into the prepared tin and spread across to the corners. Bake for 13 minutes. 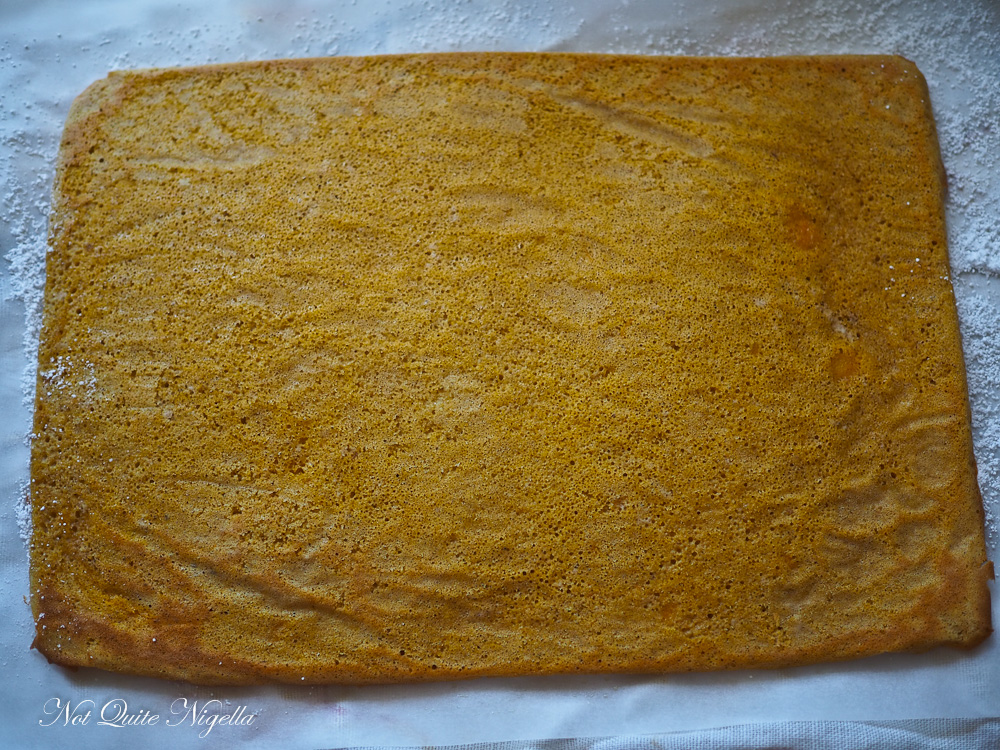 Step 3 - While the cake is baking, tear a large sheet of parchment and place on top of a tea towel and dust the newspaper with icing sugar. When the cake is baked and there aren't any wet spots on the surface, carefully place the cake while it is still hot on the icing sugar sheet. Roll up from the short end while it is hot using the tea towel to help roll it up. Allow to cool completely. 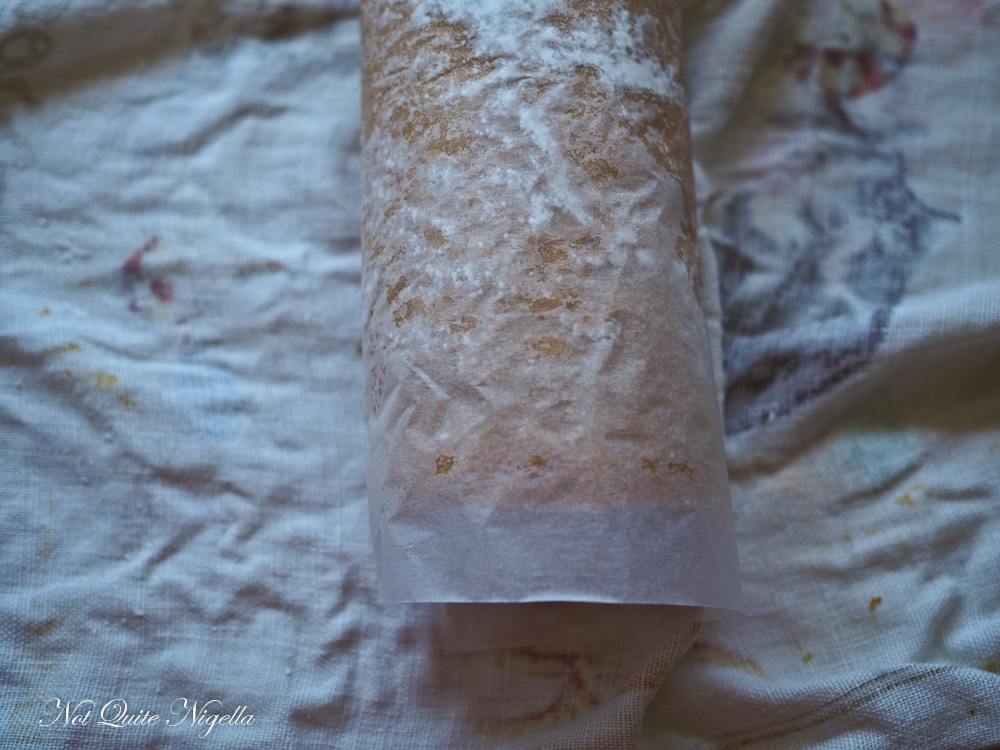 Step 4 - Whisk the cream cheese, mascarpone, icing sugar, maple syrup and vanilla together. Unroll the cake carefully and then spread the cream cheese mixture evenly and roll it back up. Place in the fridge for a few hours or overnight. 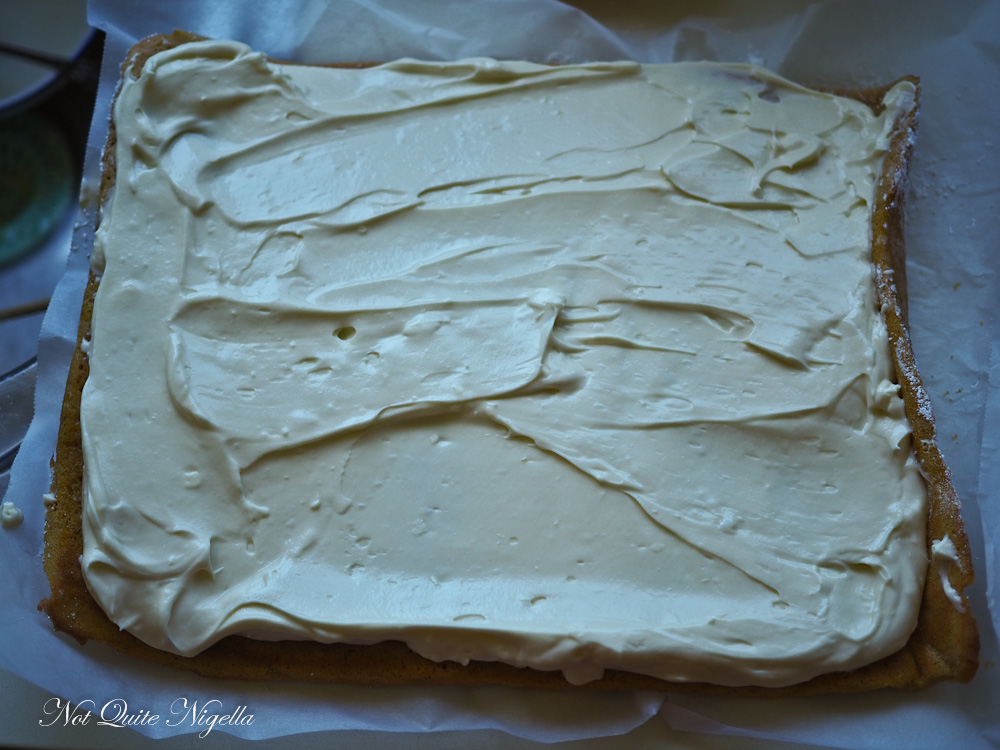