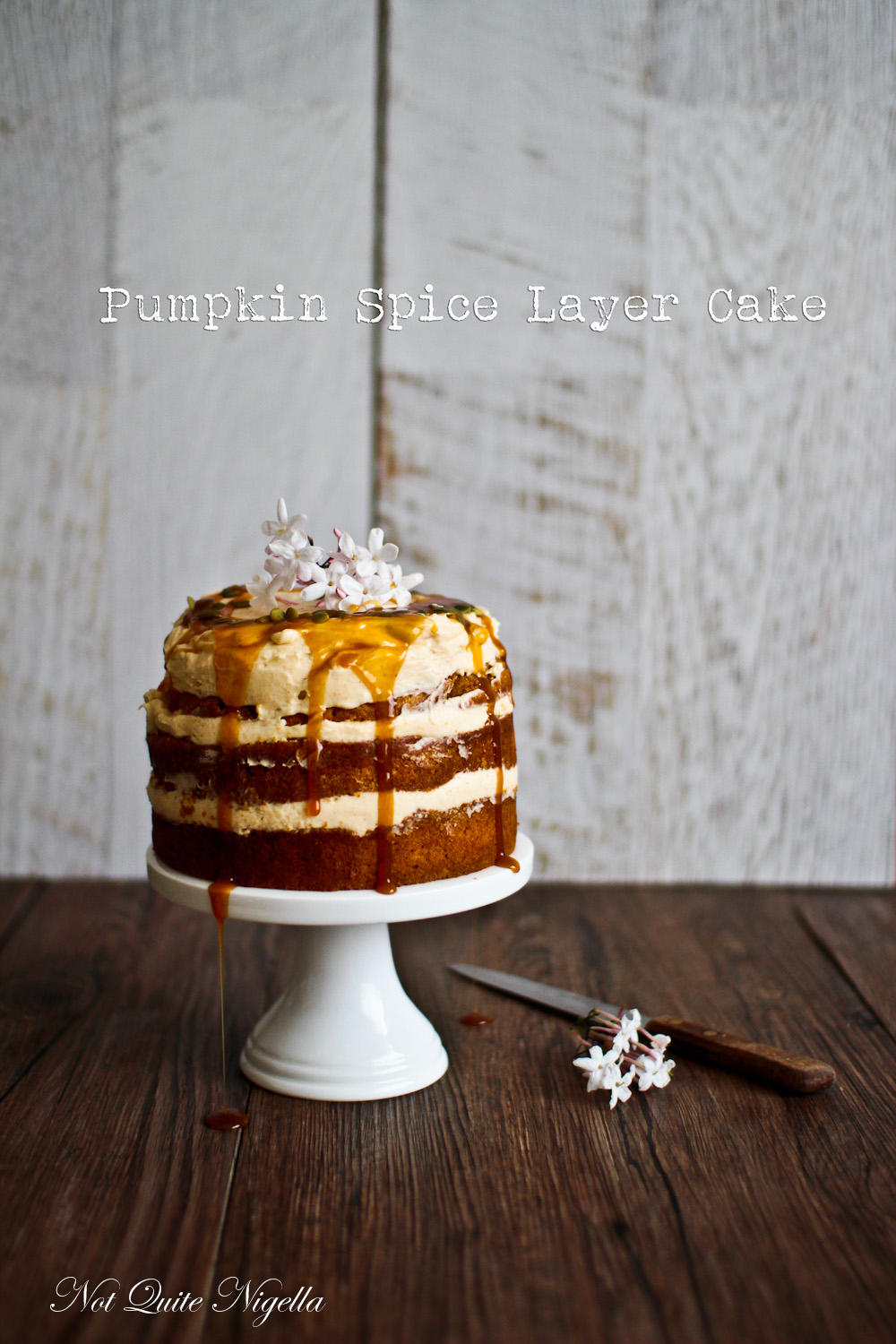 Love the aroma of cinnamon, nutmeg and vanilla or crave pumpkin pie? It's autumn or fall in the Northern Hemisphere and with that comes pumpkin season but there's also plenty of in season pumpkin available in Australia too. And this triple layer pumpkin cake is a dream. With a tender pumpkin cake and a tangy, richly spiced whipped cream cheese frosting. And her name? Willow.

The cake part is moist, smooth and soft - it's not a nubbly textured cake like say a carrot cake. I'm a big fan of cream cheese frosting but when a friend recently served me a slice of cake with cream cheese frosting I was intrigued by her icing. It was super light and not at all grainy. She told me the trick was to use 1 cup of cream cheese and 1 cup of cream with caster sugar and the cream whips up to create this heavenly light and tangy frosting. It was too easy and delicious that I had to try it on this cake. And pumpkin spice (cinnamon, nutmeg and vanilla etc) needs no introduction although I did read that Anthony Bourdain recently said that he wished that the pumpkin pie spice craze would drown in its own blood. You'll have to pry those spices out of my dead hand... 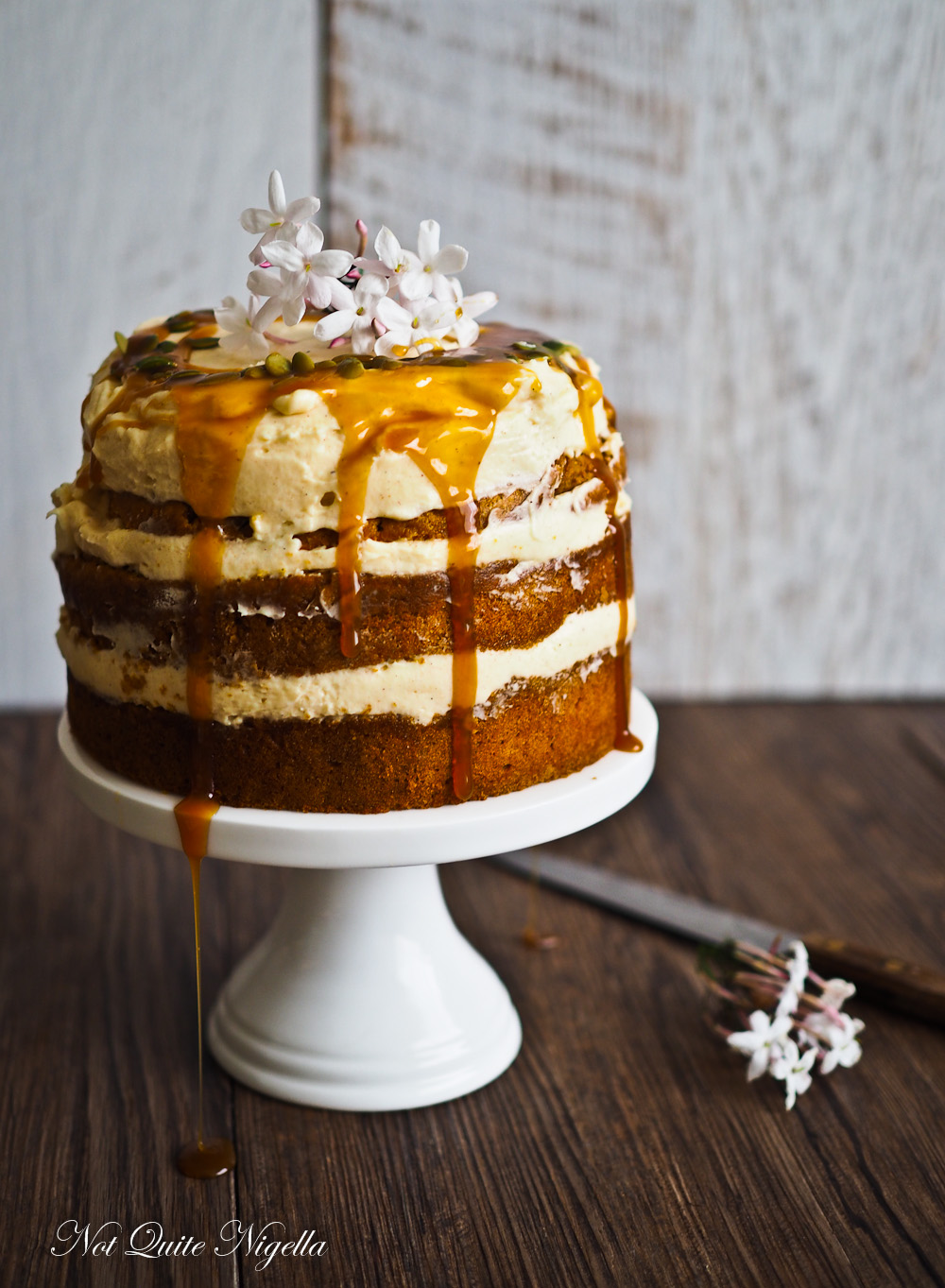 Every week I write a list of recipes that I want to create and develop. There's usually half a dozen every week that I make. After I shop for ingredients I add them to my calendar. I bought pumpkin because canned pumpkin isn't easy to get in Australia and made my own puree and I couldn't wait until the Wednesday which is when I would be making this cake.

I bounced out of bed on Wednesday morning. For the past few weeks Mr NQN has been home with the flu. He was in the lounge room tapping away on his computer working as he had lost his voice but felt ok and thought that it would be better if he stayed at home and didn't talk to anyone. It took me a while to get used to not communicating with him but I gave him a little bell in case he needed me. And by day three I got used to ignoring him and letting him work in peace.

And he got a glimpse into my strange sort of rituals. I'd constantly be talking to myself whether it be while making recipes or just shouting out things to myself (that's what happens when you work at home for 9 years, that's a warning kids mm'kay ;). At 11am I made my lunch and ate it while catching up on the news online and then occasionally I'd bolt from the study like a bat out of hell when I wanted to check on an ingredient or something I had forgotten or came up with a new recipe idea. 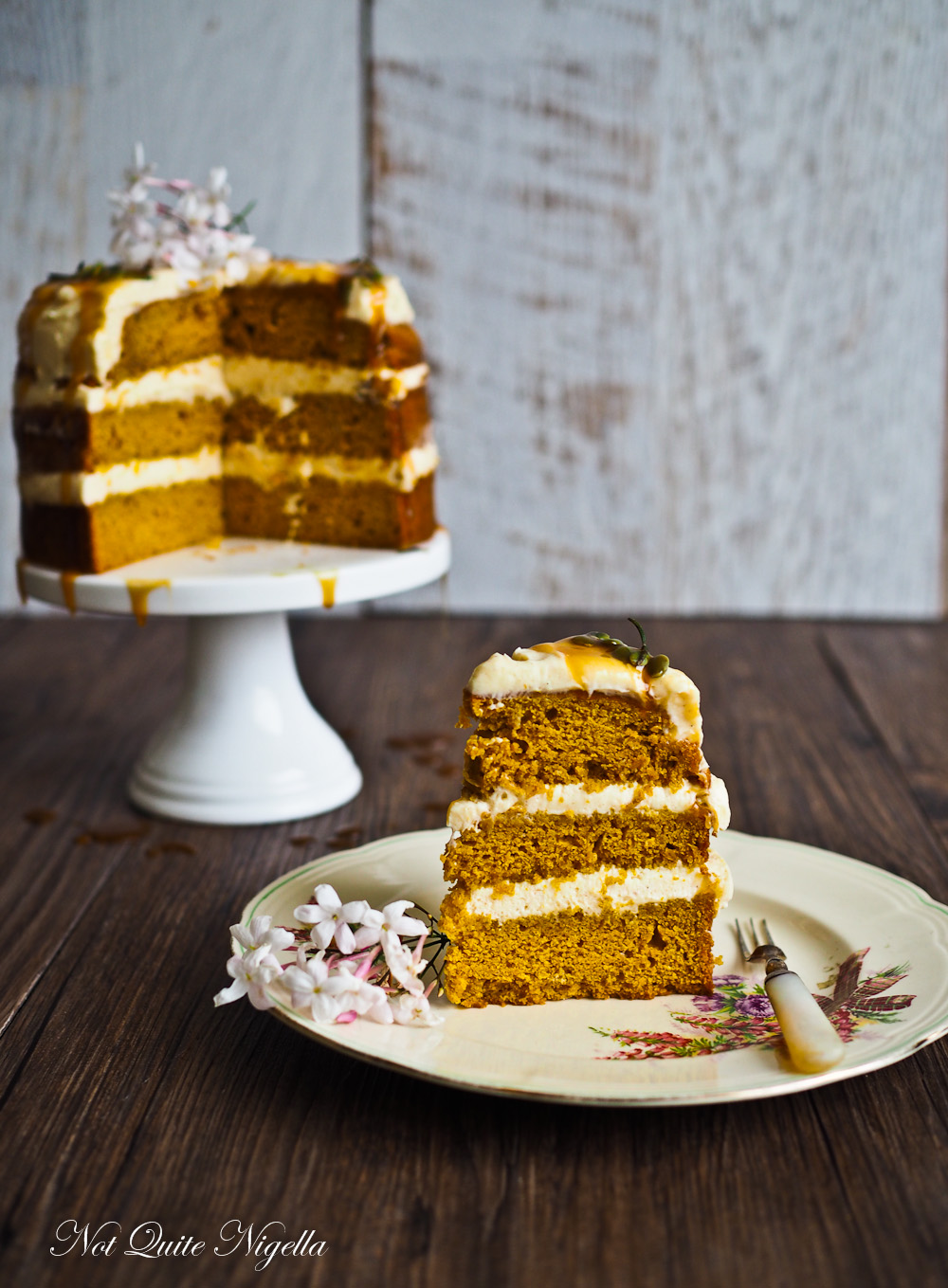 Then there were the phone calls and my photography ritual. You see Dear Reader I like to have the television on when I take photographs. I'm not sure why and it has to be a certain type of program like Ellen or Extra but I have to have it on. I looked at him, knee deep in code his brow furrowed and said, "Errr so I need to turn the tv on when I take photos ok?". He looked at my oddly and smiled that tolerant smile.

I made it (hopefully) better by giving him a piece of this cake. If you love pumpkin pie spices and cream cheese frosting then I urge you to make this cake. It's a beauty. And we'll keep any funny little rituals a secret. Pinky swear ;)

So tell me Dear Reader, do you do anything odd when you're alone? Do you talk to yourself? And what are your thoughts on pumpkin spice? Have you ever had a whipped cream cheese frosting before? 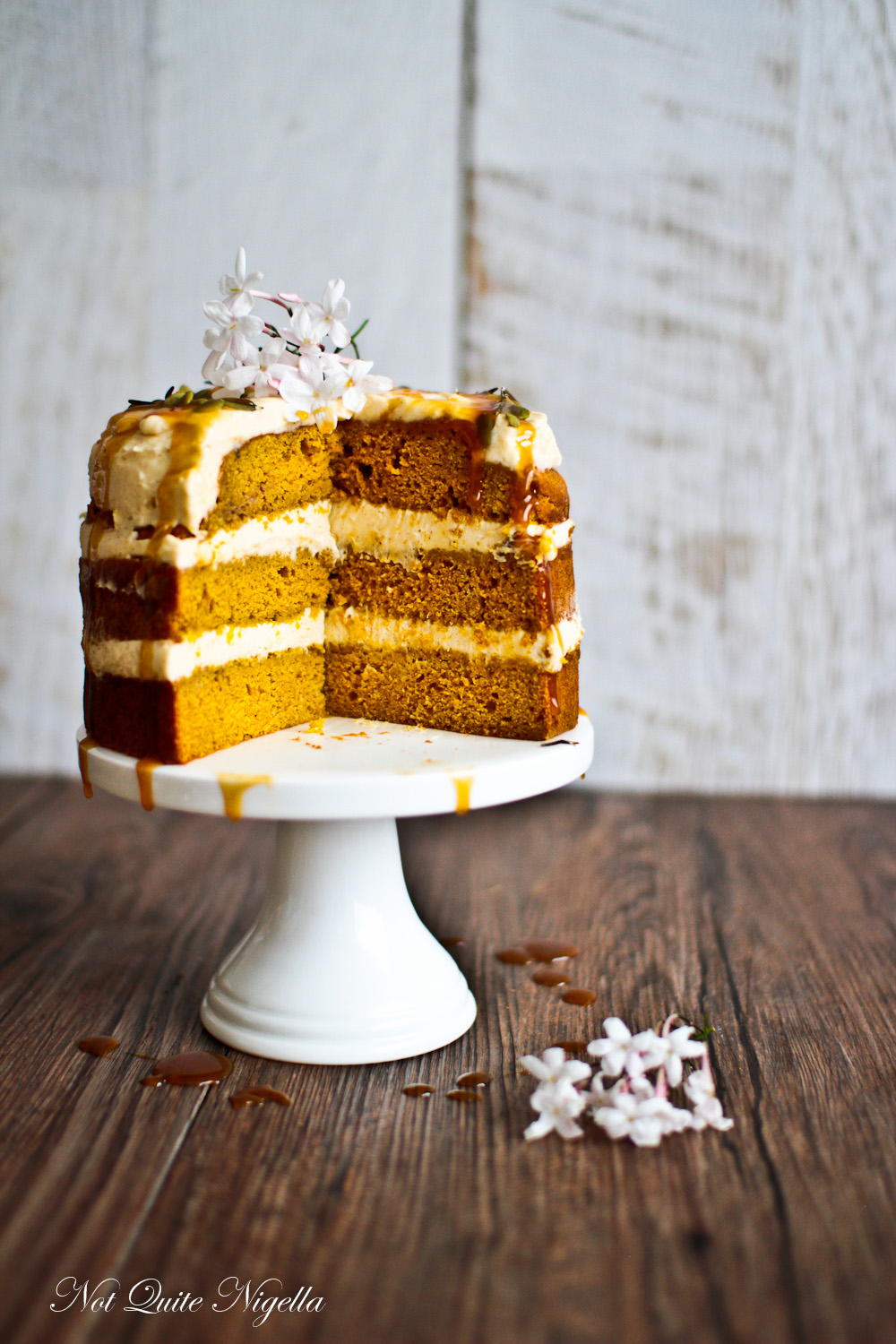 Step 1 - Preheat oven to 145C/293F (a very low oven) and line a 20cm/8inch springform round tin with parchment on the base and sides. Whisk the cake flour, baking powder, bicarb, cinnamon and nutmeg together. 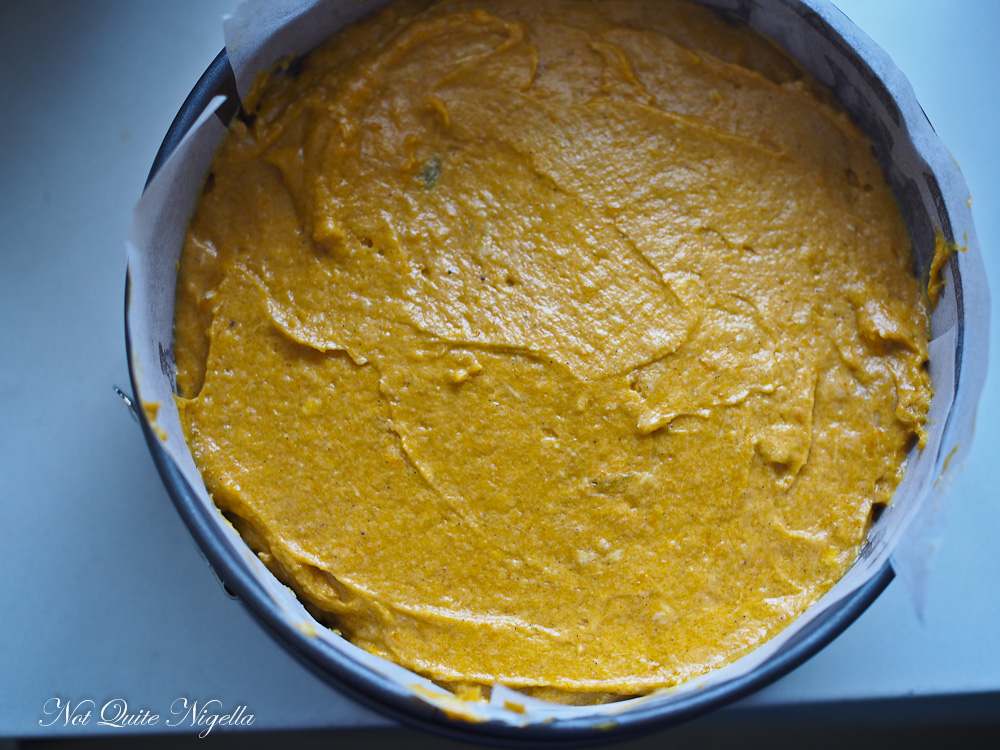 Step 2 - Beat the butter, sugar and vanilla for 3 minutes until light and fluffy. Add eggs one at a time making sure to combine them well between each addition. Using a spatula, add half of the flour mixture and half of the pumpkin and stir. Add the rest of the flour and pumpkin making sure not to overmix. Spoon into the prepared tin and bake for 50 minutes to 1 hour or until a skewer inserted comes out clean. 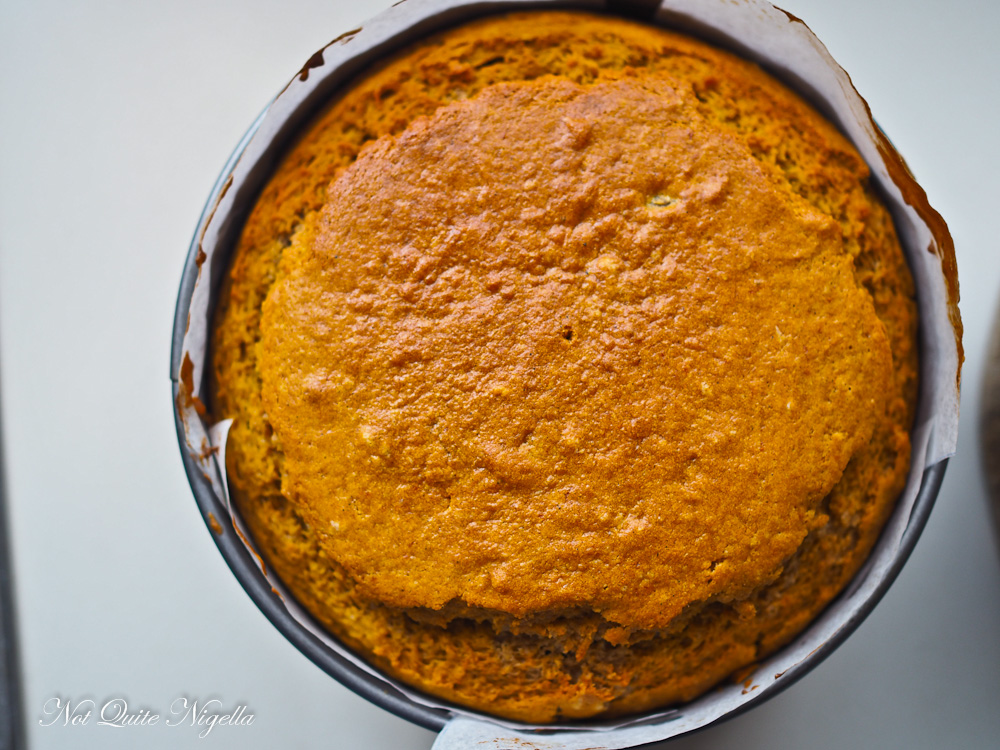 Step 3 - Cool for 10 minutes and then unclip the cake and allow to cool completely. You can wrap this up to frost the next day. 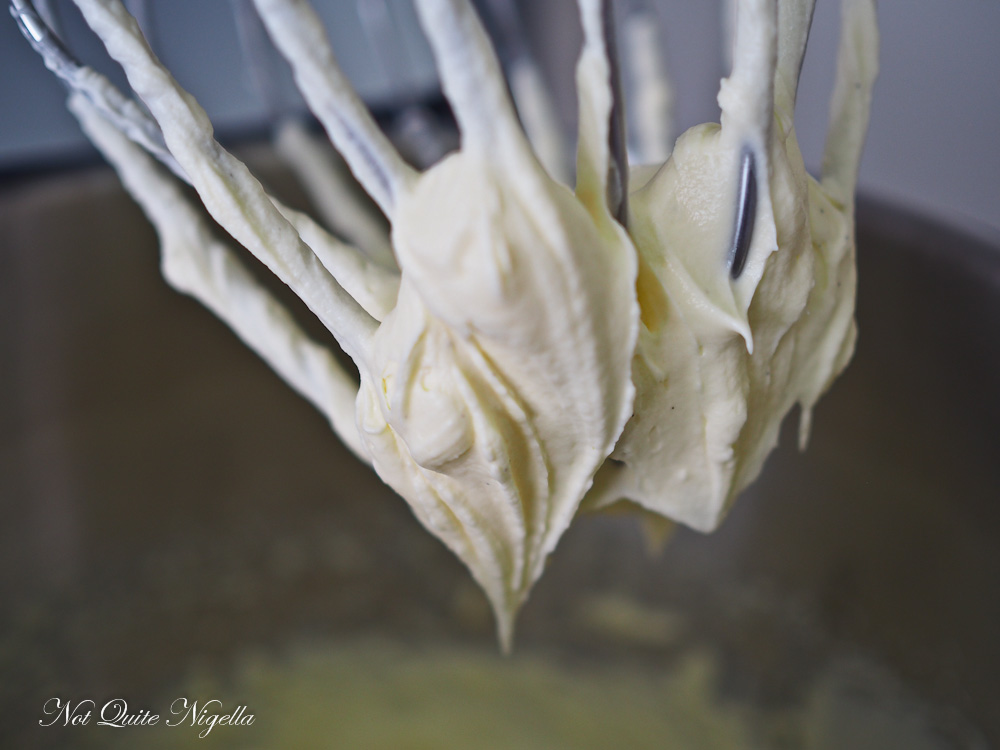 Step 4 - Using a whipping attachment, whip the cream cheese, sugar, salt, cinnamon, vanilla and citric acid or lemon zest for 2 minutes until fluffy. Add the cream and start on low speed while it mixes in and then gradually increase to high speed whipping until it is voluminous and fluffy. 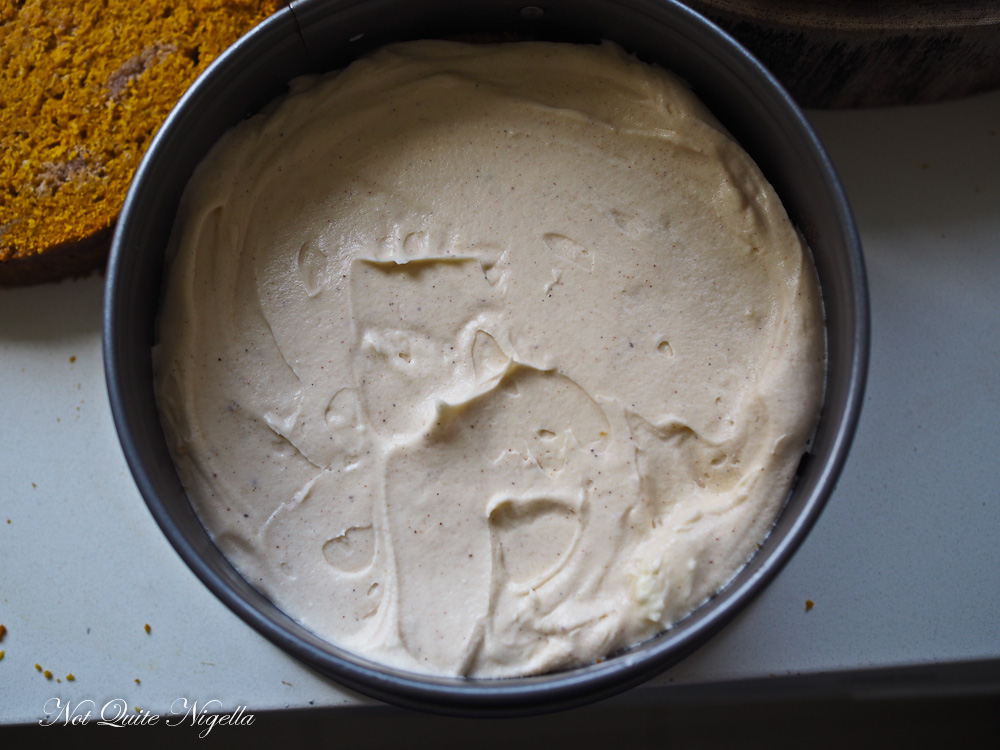