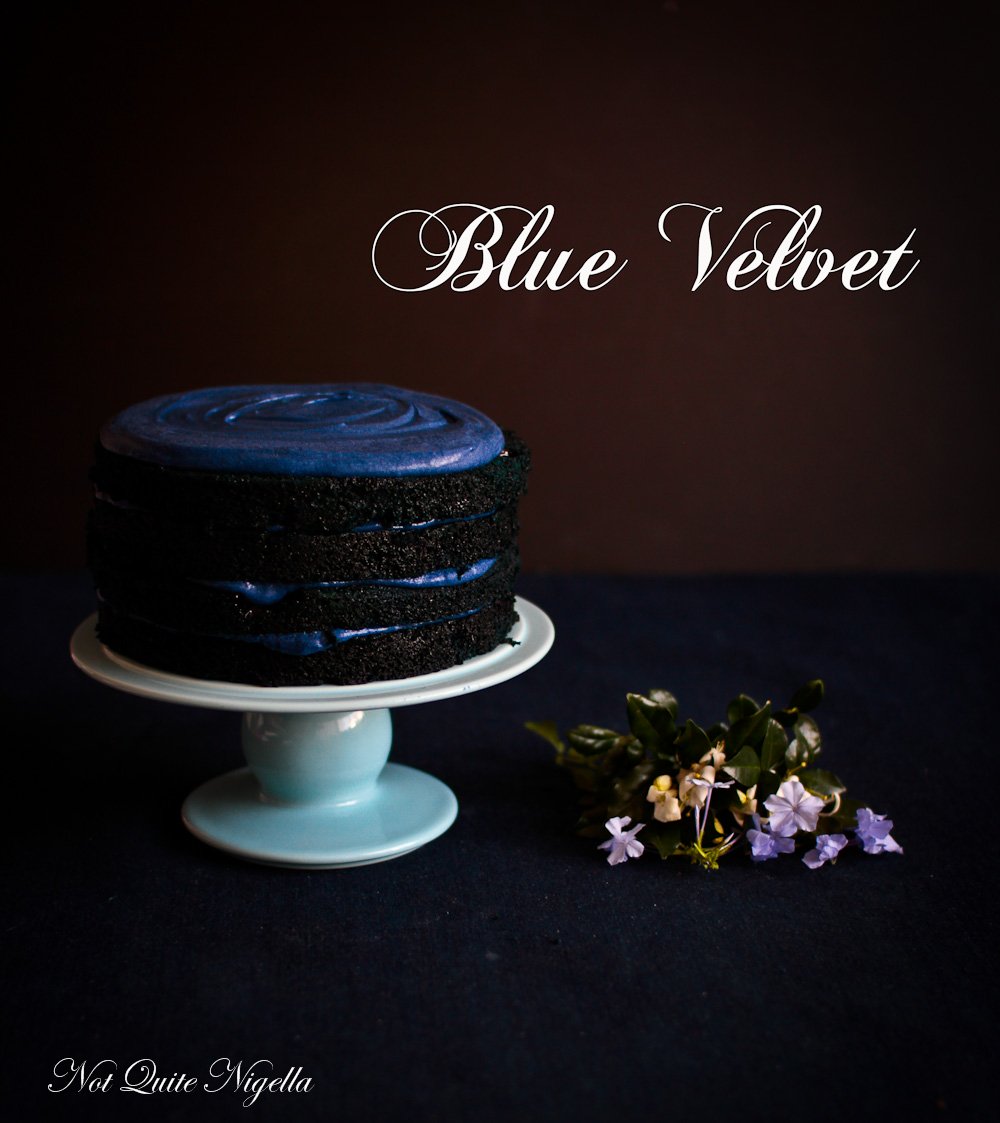 There was a song that I had in my head as I was baking this cake. It was, quite appropriately Blue Velvet, the version sung by Isabella Rossellini in the 1986 film of the same name by David Lynch. The reason why is because I was making a dark blue velvet version of the famous red velvet cake. I fell in love with red velvet cake ever since I first saw it in the film Steel Magnolias. It is a cake I baked for a Southern restaurant and we also had it for our wedding. So it seemed only natural that I try my hand at a blue velvet cake!

I've always had older friends and I adore my dearest friends Queen Viv and Miss America who could be my parents in terms of their age although not their attitude. You see I have always wanted to grow up quickly and for me, childhood was overrated. As a kid I loved watching movies that were meant for adults although I'm sure this is pretty common amongst most kids. Even if I didn't understand what was happening on the screen, I think I sort of understood subtleties. Or at least the visuals. 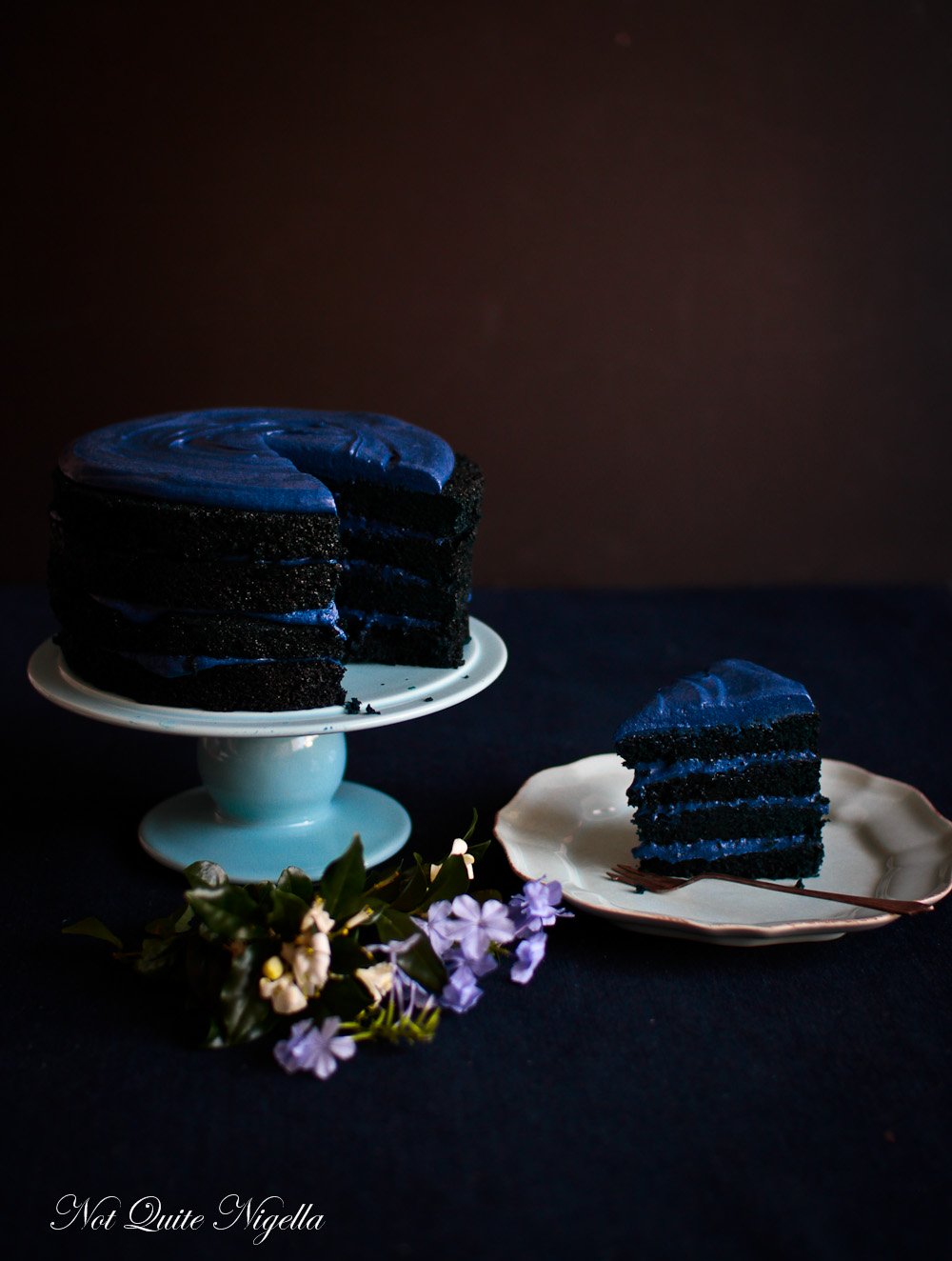 One of my favourite movies when I was very young was the surreal mystery Blue Velvet. I remember watching it with my friends during a sleepover (our parents had no idea that we were watching it which made it that much more fun!). I remember thinking, "Oh god this is weird but it's SO good!". I didn't quite understand why Dennis Hopper had the oxygen mask (actually it was probably amyl nitrate but we didn't know what that was) or why he was constantly asking for "Mommy" or referring to himself as a baby. Or why he was so violent and crazy. There were so many questions we had but of course there were no adults to ask but there was something about it that had all of us staring at it wide eyed while we should have been sleeping. 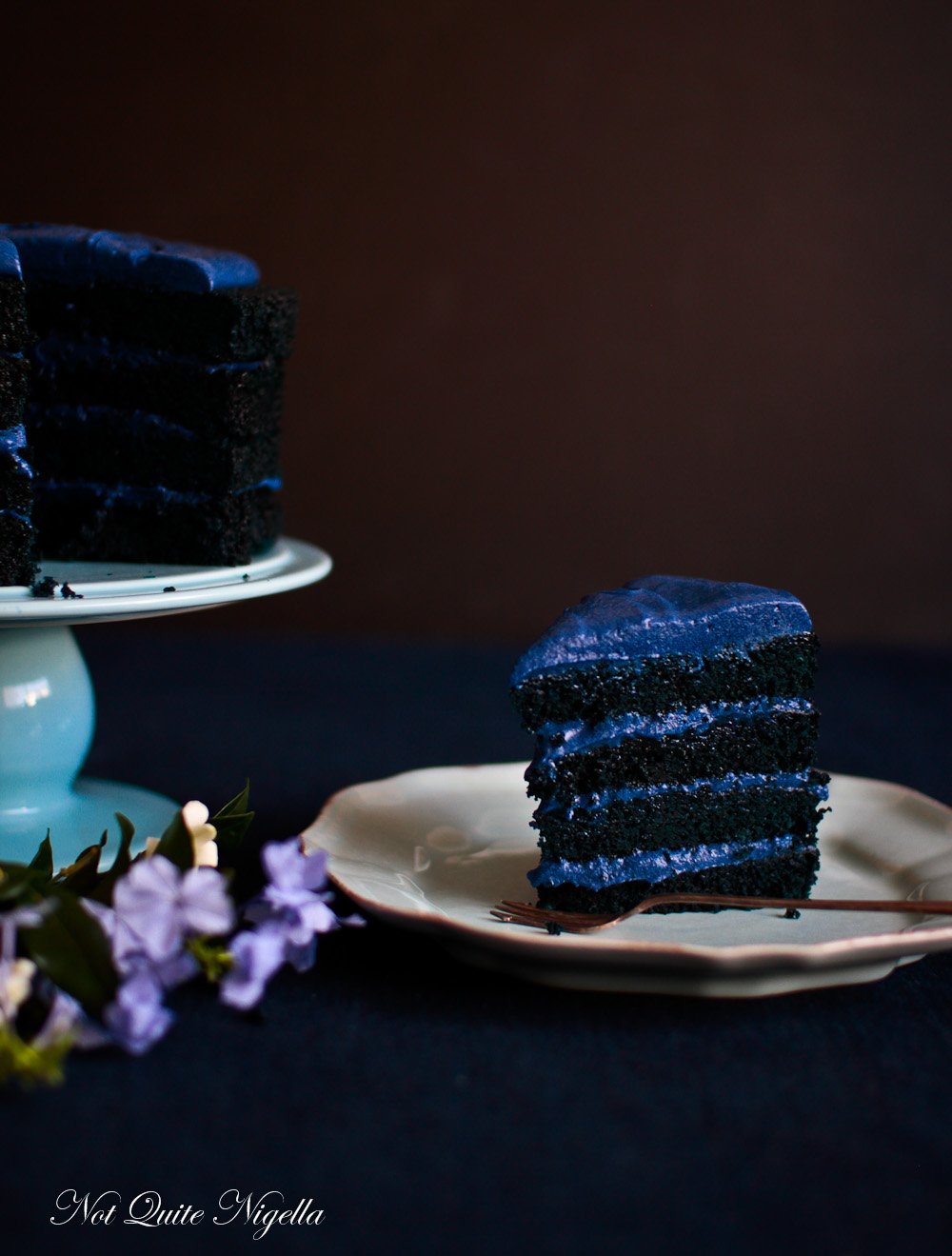 Also for the last year or so I've been very excited that one of my favourite televisions shows by the same director will be back next year. The 90's show Twin Peaks is said to be back in the first half of 2017. It was a show that I watched until the very end, even when it got seriously weird. But I am a huge fan of the director David Lynch and I couldn't tear my eyes away from his very odd vision and his quirky storylines and characters.

I've already baked an Agent Cooper Cherry Pie but after rewatching Blue Velvet and seeing it from an adult perspective (still woah!), I decided to make a cake. A blue velvet cake specifically. I'm sure you all know the red velvet cake. The southern cake with a deep red inside and a cream cheese frosting. Although it tastes relatively mild considering the intensity of colour, the texture is what really makes it a favourite. 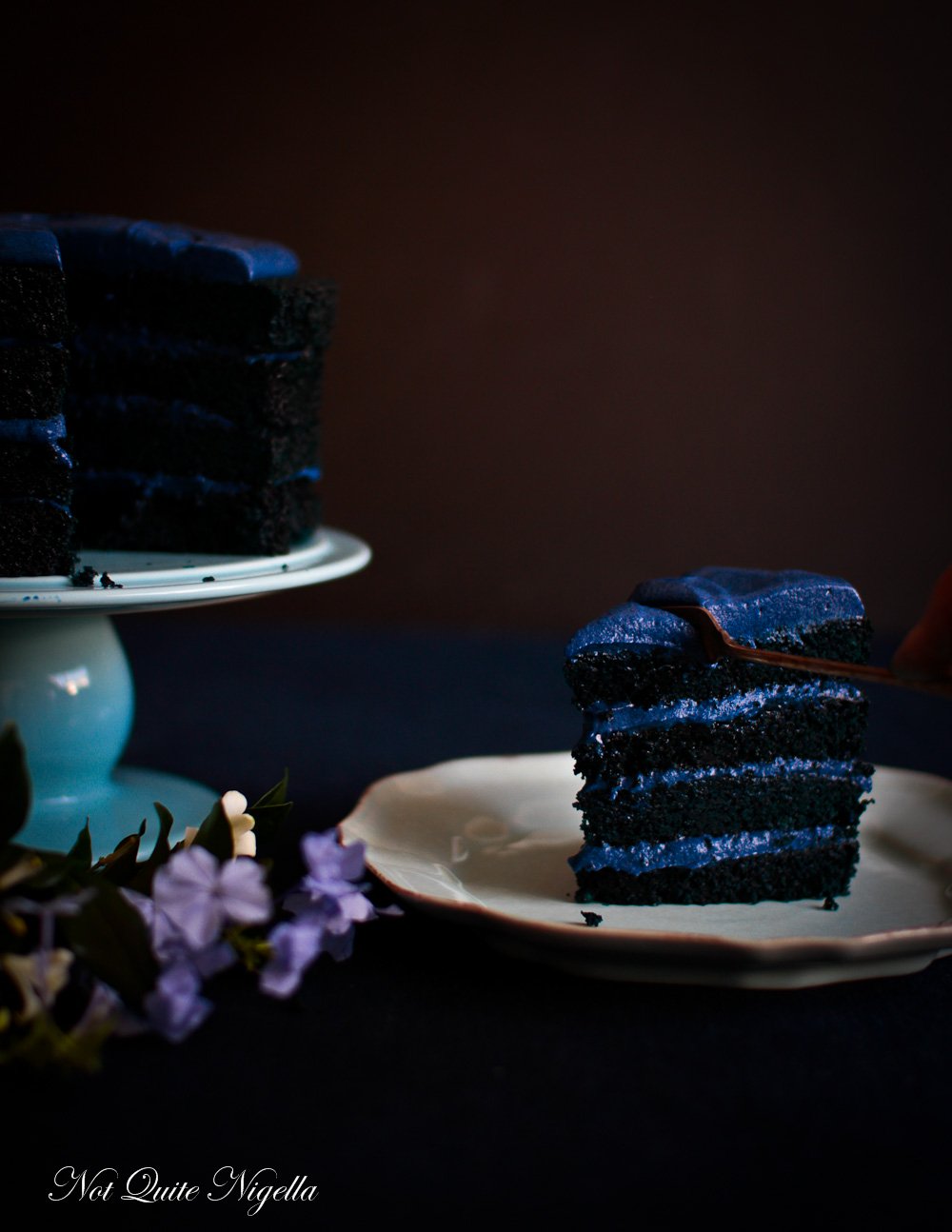 Blue or red velvet cake is a very moist cake and while sweet, the tanginess of the cream cheese frosting goes well with it. Very early one they used to use an ermine or boiled milk frosting on red velvet cake but I think the tang from the lemons and cream cheese add much more to it. The cake's texture is as you can perhaps see gorgeous moist and yet still not solid or heavy. I will warn you that a blue tongue will result and you can of course use natural colourings or less colouring should you want to limit this. I perhaps went too dark but you see that's where my mood was when I decided to make this cake after rewatching the film...

So tell me Dear Reader, do you have memories of sleepover movies? Did you ever watch things that your parents didn't let you? And have you ever seen Blue Velvet and what did you think of it? Do you have a favourite director? 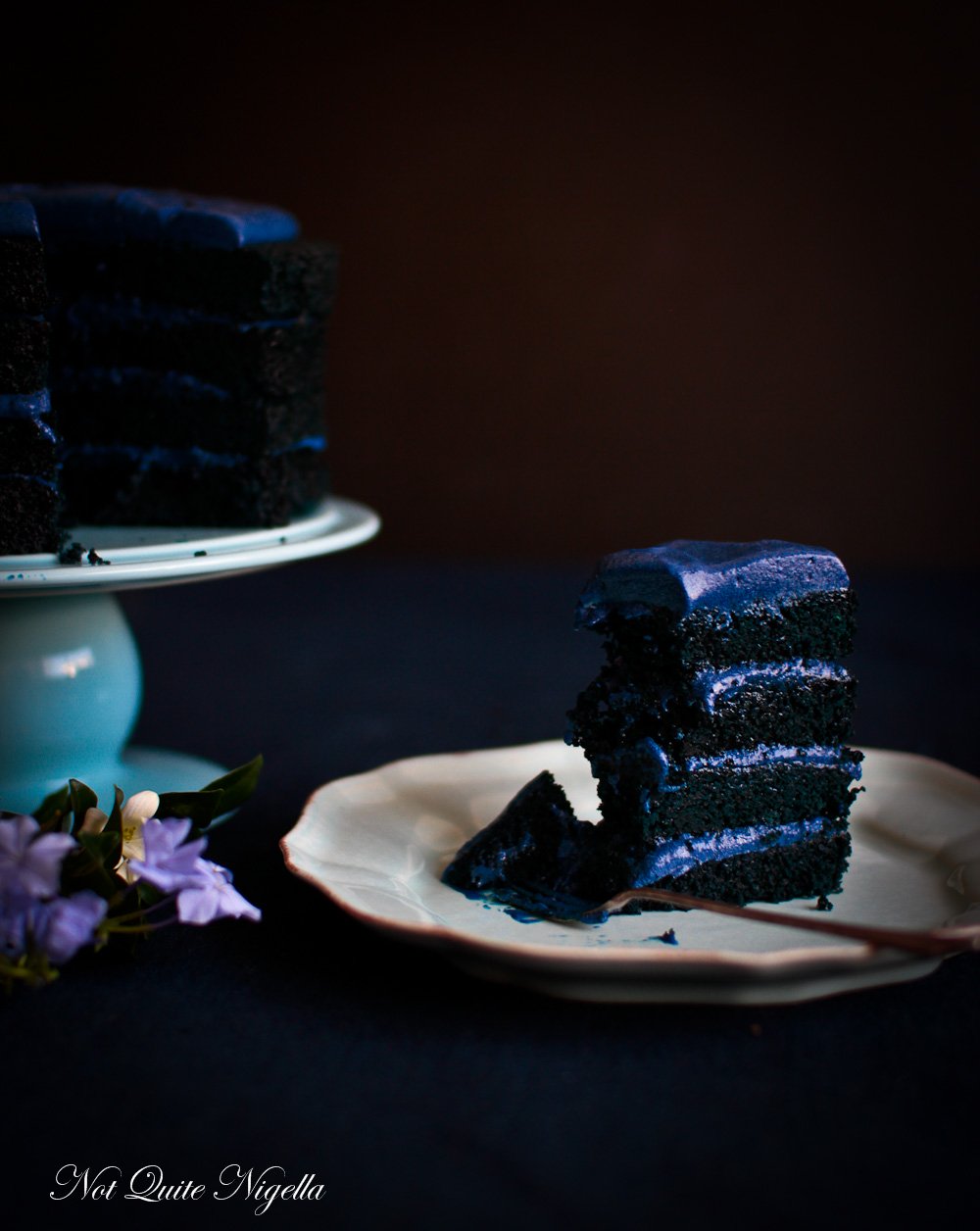 *To make cake flour, fill a measuring jug with 4 tablespoons of cornflour/fine cornstarch and then fill to the 2 cup mark with plain flour.

Step 1 - Line 2x 20cm/8inch tins with parchment on the base and sides. Preheat oven to 130C/266F. In a large bowl whisk the cake flour, sifted cocoa powder, bicarb and salt.

Step 2 - Heat the cream and chocolate together in a microwave and stir until melted and smooth. Set aside. Cream the butter and sugar together and beat for 4 minutes. Add the eggs in one at a time. Don't worry if it looks curdled. 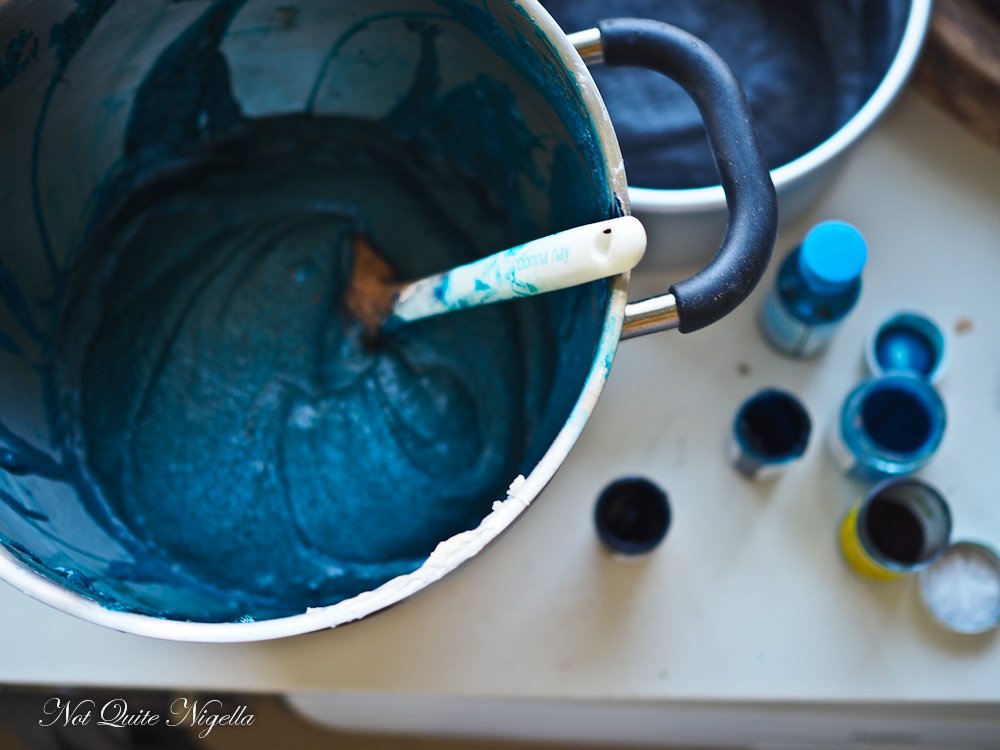 Step 3 - Mix the food colouring (how much depends on the type you are using, but I went for a strong colour with the black) with the buttermilk, vanilla and chocolate and add this in two lots. Then add the flour mixture in three lots making sure not to overmix. 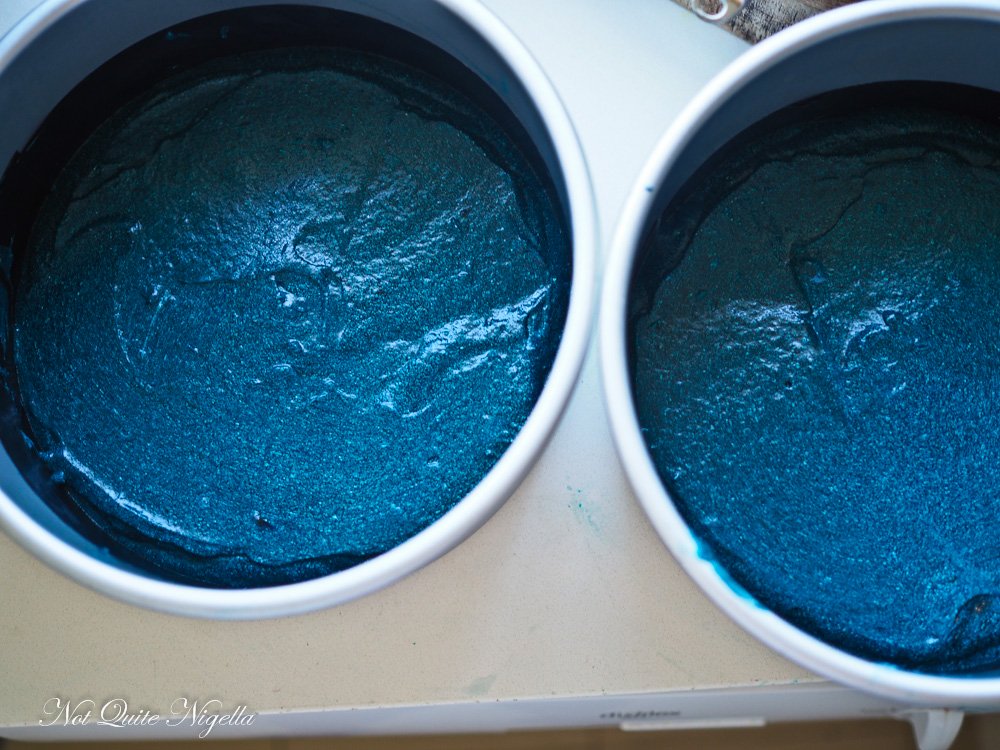 Step 4 - Spoon into the prepared tins and bake for 1 hour and 5 minutes or until a skewer inserted into the centre comes out clean. Allow to cool completely. I placed them in the freezer.

Step 5 - If you are icing these on the same day you baked them then a tip is to freeze the cakes to make them easier to handle. This is a very soft, moist cake and can break otherwise especially as you will be splitting them in half horizontally. I partially froze them and then sliced them in half and then froze them again placing parchment between each layer.

Step 6 - Make the cream cheese icing. Beat the cream cheese and butter until very smooth. Add the sifted icing sugar in on low speed and then increase the speed. Add the vanilla, lemon juice and colouring until you get a colour that you like.

Step 7 - Place the cake on a serving plate and scoop the icing into a large piping bag (you may need to fill it in two lots). Pipe the icing onto each layer.