The Lucky Number 9 at So 9, Waterloo 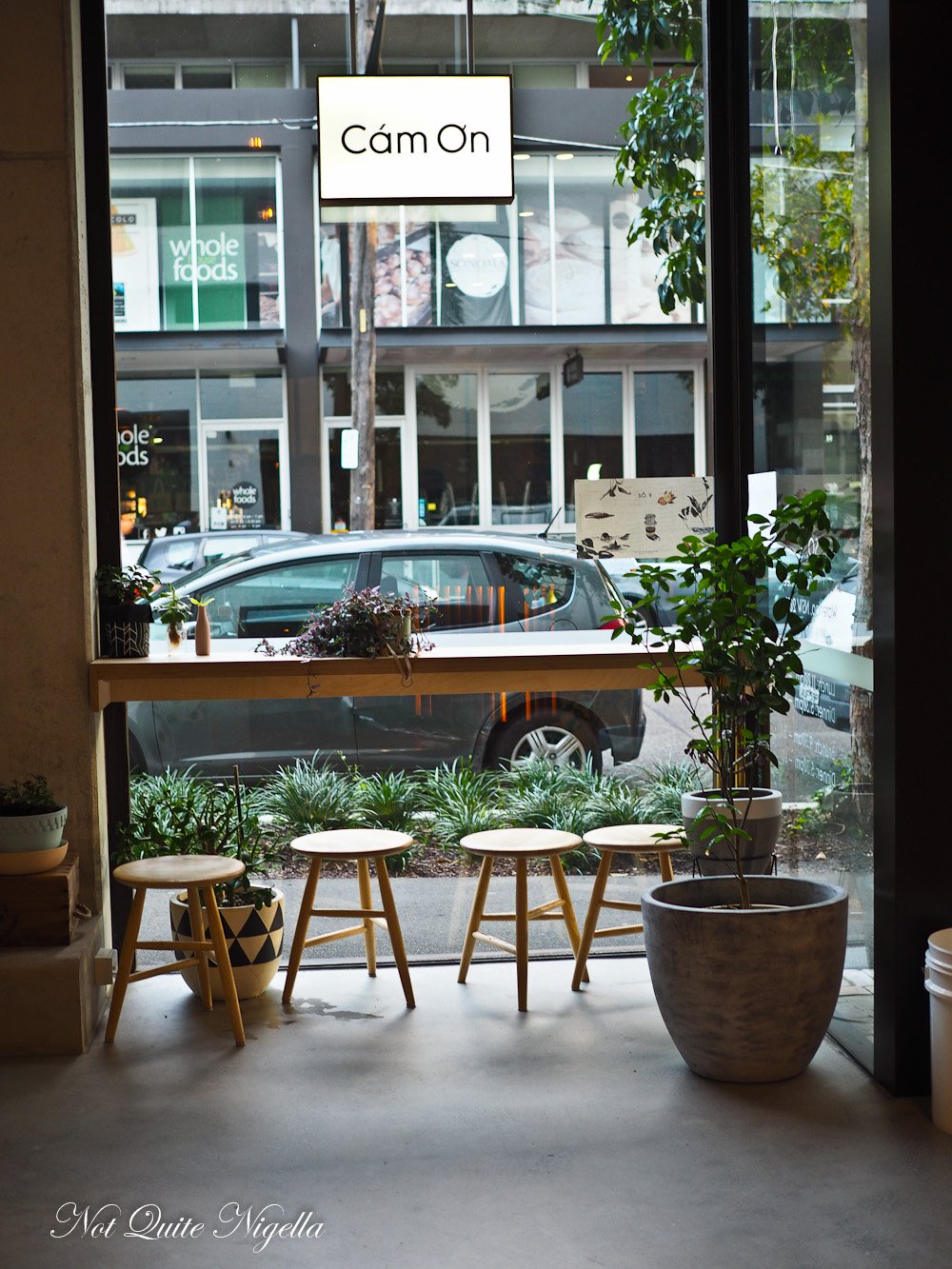 Open for around 6 months, So. 9 on Danks Street in Waterloo is an airy and fresh eatery with lots of pale blond wood and funky accessories. The food however is planted in Vietnamese territory with a couple of Asian inspired dishes. There is a banh mi menu during the day and three choices of crispy (and enormous) Vietnamese pancake as well as comforting bowls of pho and stews, grilled dishes and ice cold slushies. 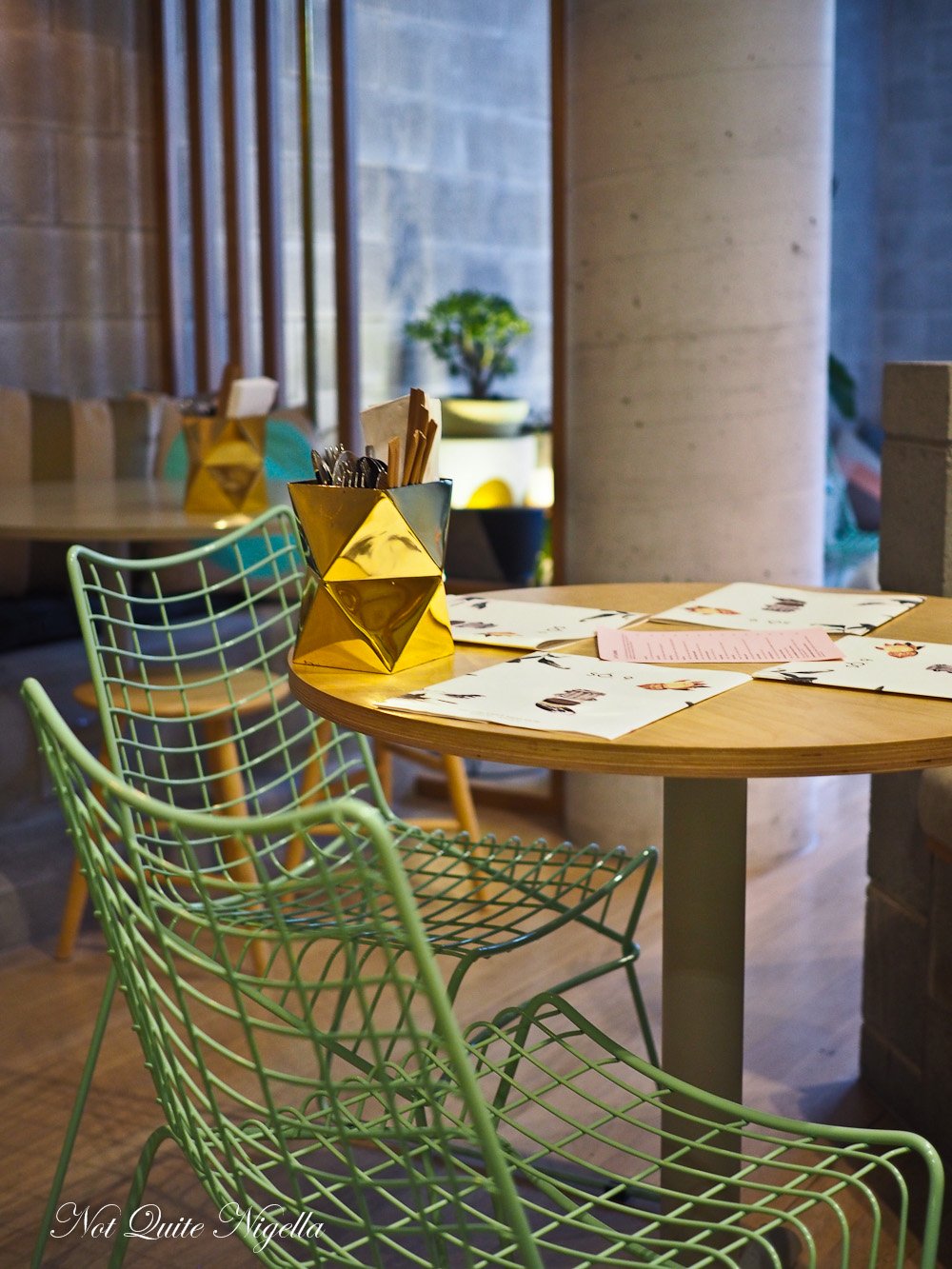 There's a little ritual our family does every time we go out to dinner. It came from my father, a funny soul who sort of inhabits his own world. One night during dinner at a restaurant he had finished eating. We were all still eating and talking but he put down him utensils and looked around and said, "We go now?" while we we mid fork to mouth. It was at the time hilarious and still continues to be as someone else during dinner nowadays tries to beat everyone to the punch by saying the line at least once, usually after the entrees have been served. 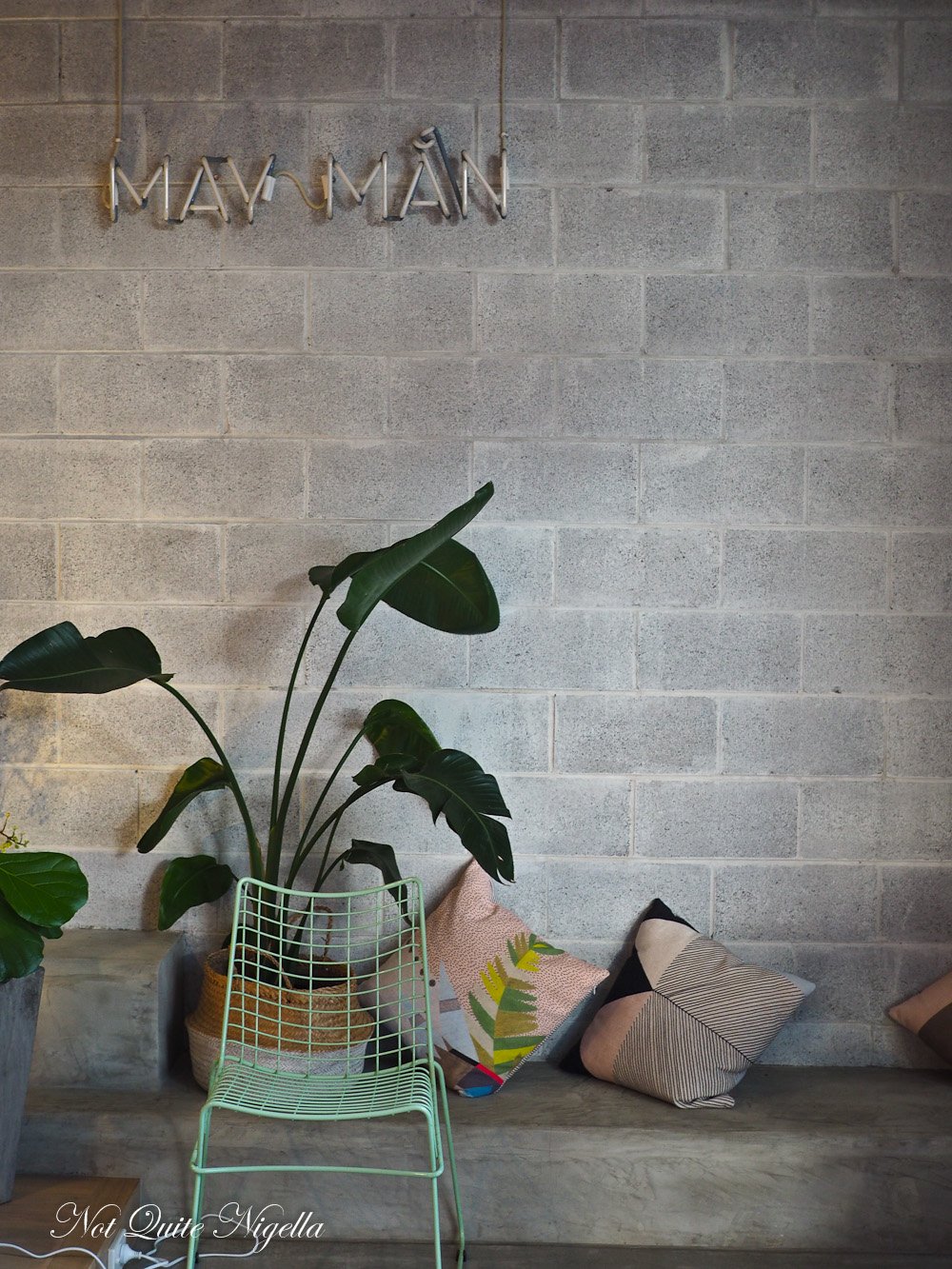 This time when we were at So.9. It was a place that ticked boxes for my parents. It was closeby and they love Vietnamese food. So.9 meaning Number 9 (a lucky number in Vietnamese culture) is located on Danks Street Waterloo and has been open for around 6 months. 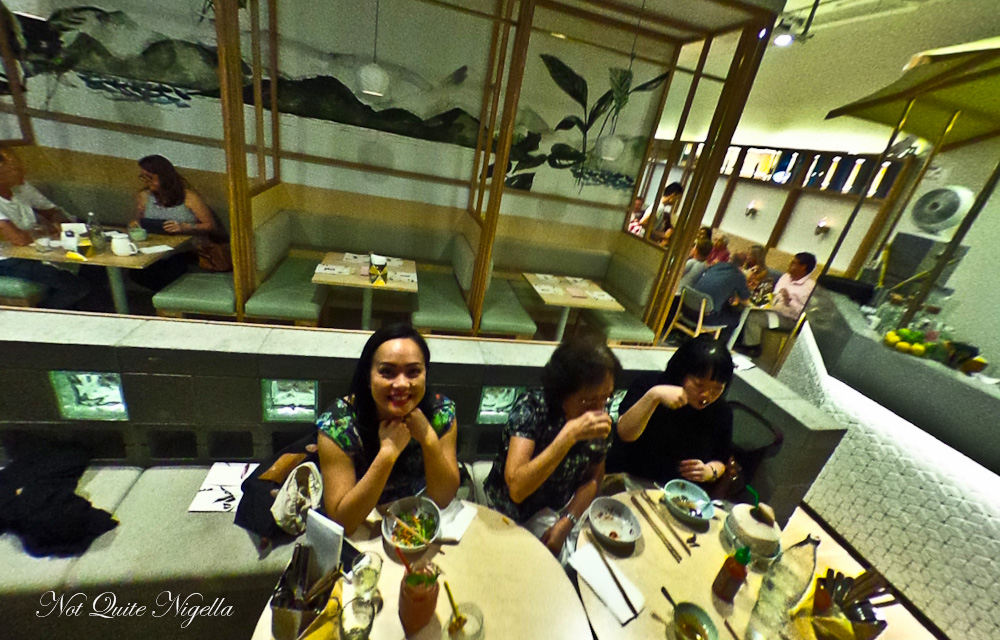 The interior is a modern and airy warehouse with lots of concrete, smooth lines and pastels. The restaurant is divided into two parts with open "bars". Alas the booths that look inviting are too small for a table of five (although we were willing to give them a go). There's a 50 strong birthday party in one section and we are sitting in the other. 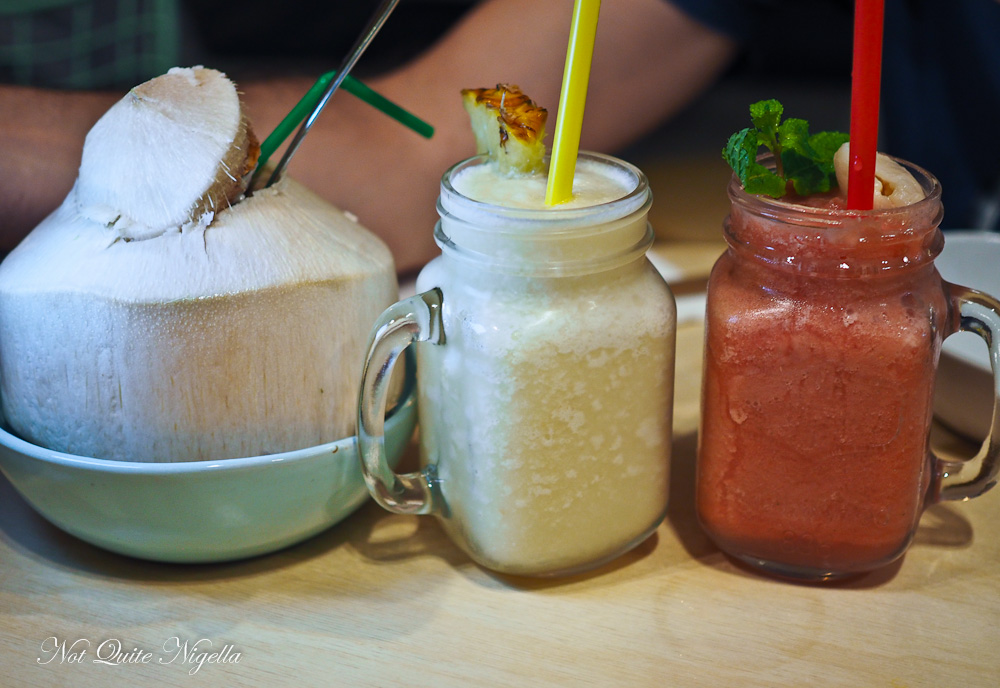 We get a couple of slushies and a coconut water. They're refreshing and with just the right amount of sweetness. Usually I love lychee and coconut but the watermelon is just a touch more thirst quenching. 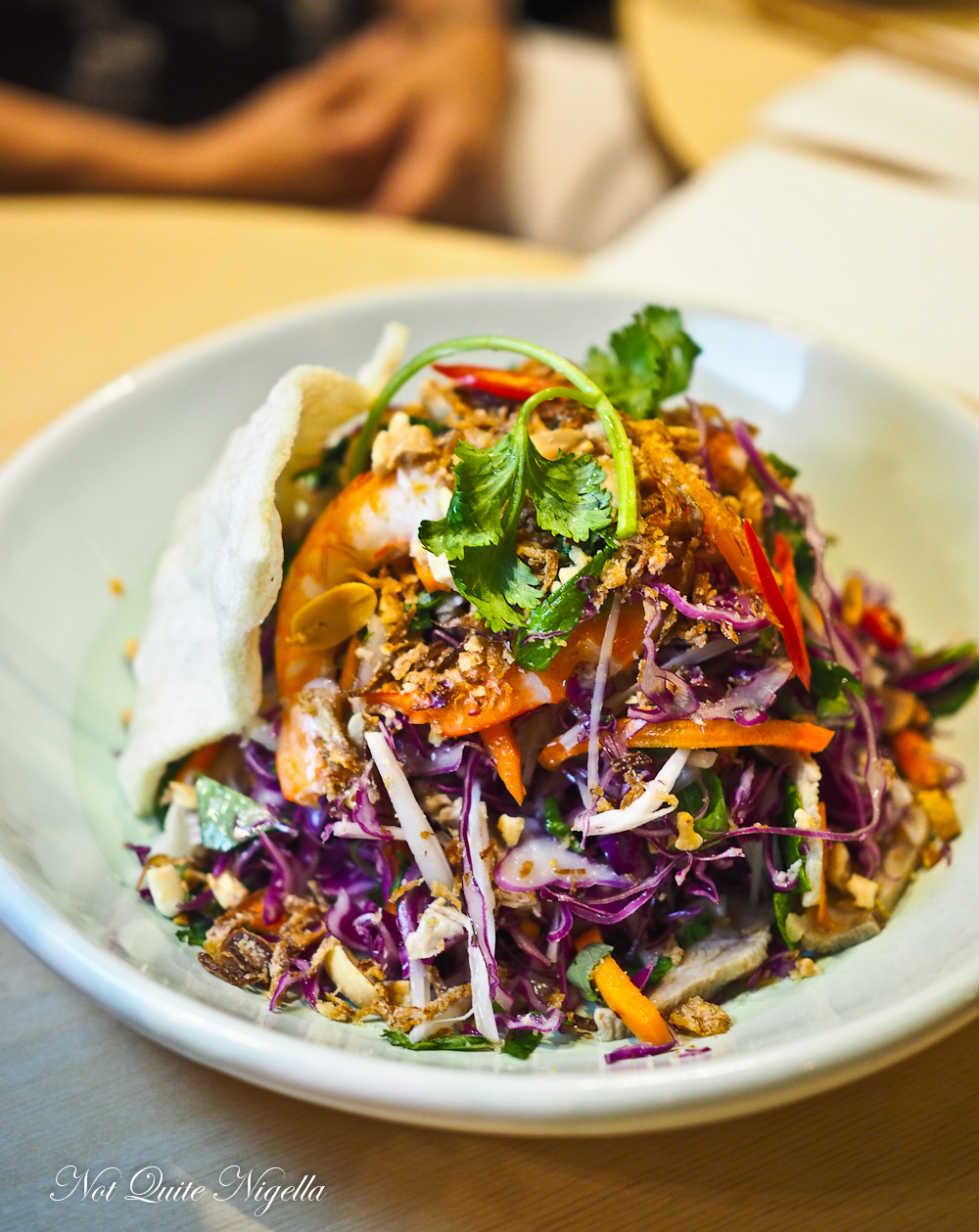 The flavours in this salad are so clean and fresh that even my salad ambivalent father is rather smitten by this. There aren't that many prawns in this (five halves) but we'll forgive that because the pork is plentiful and the whole thing is well balanced. 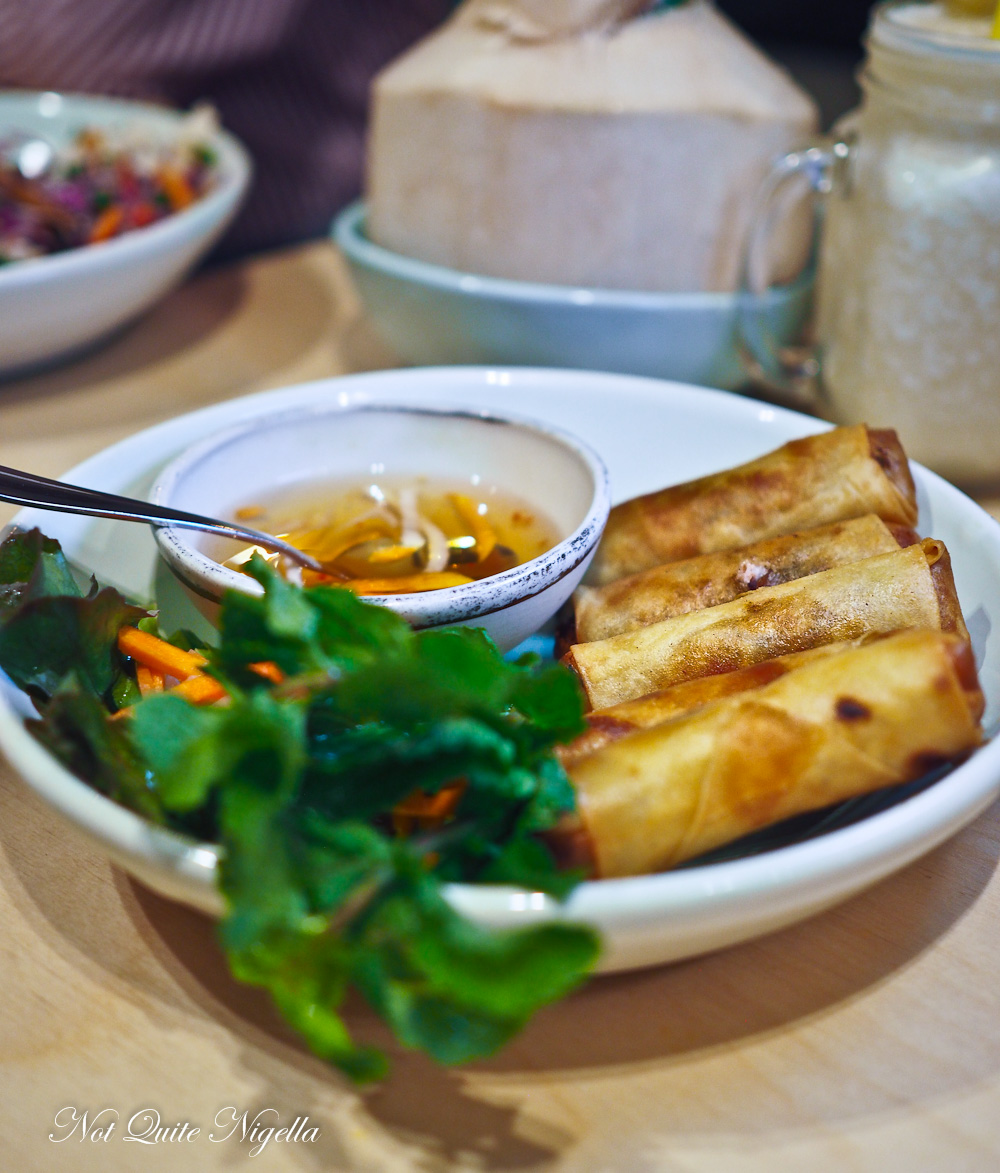 I ordered these as I know how much my mother loves spring rolls and they do not disappoint. They're meatier than others that are often filled with vegetables. We enjoy them dipping in sauce or by themselves as they're full of flavour. 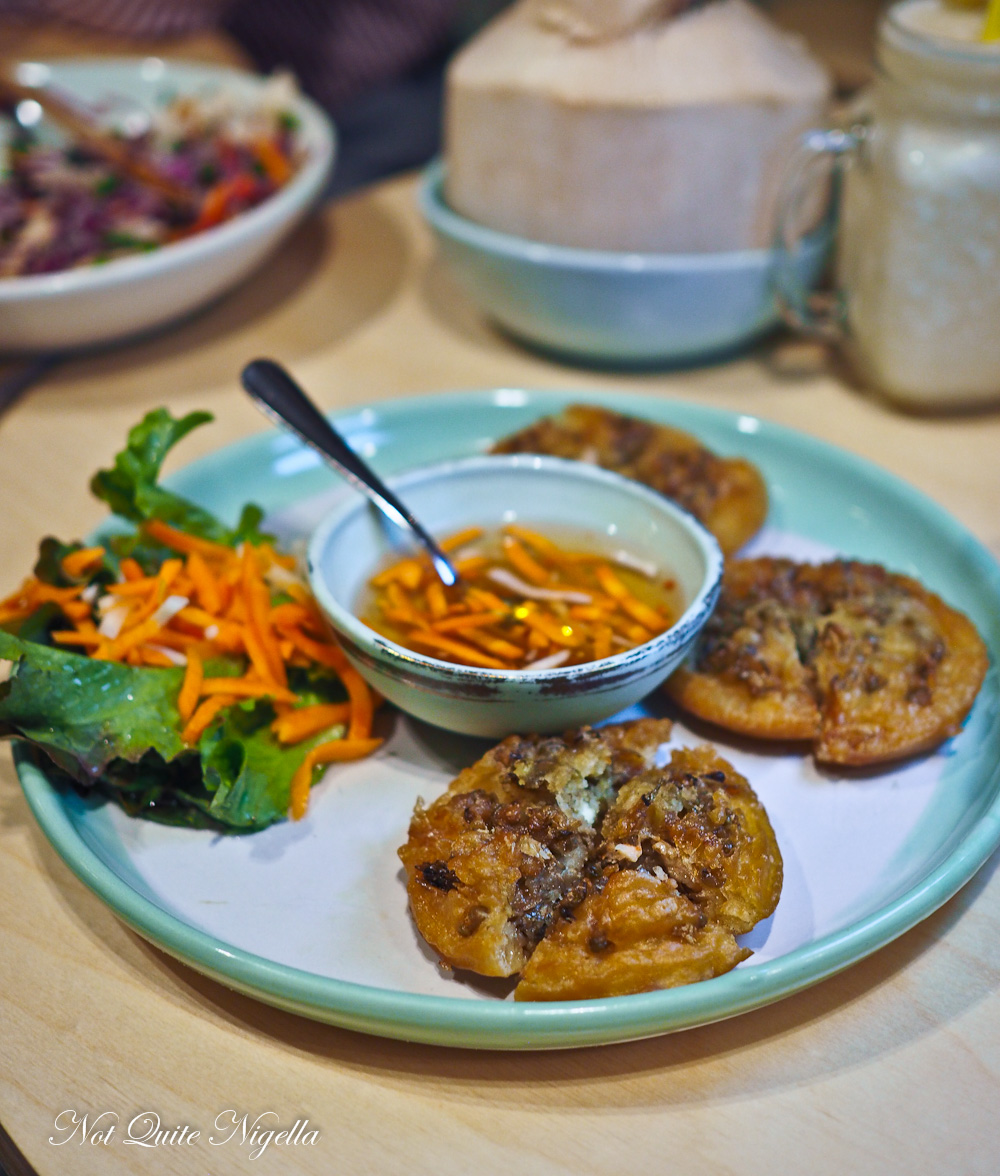 These little cakes are a hit with everyone. Cut into quarters these are sort of distant cousins to prawn toast. They are deep fried puffy cakes topped with fried mung beans and shrimp. I grab a butter lettuce leaf and salad and wedge a quarter of the banh cong in and dip it in the sauce. The salad lightens the deep fried morsel. 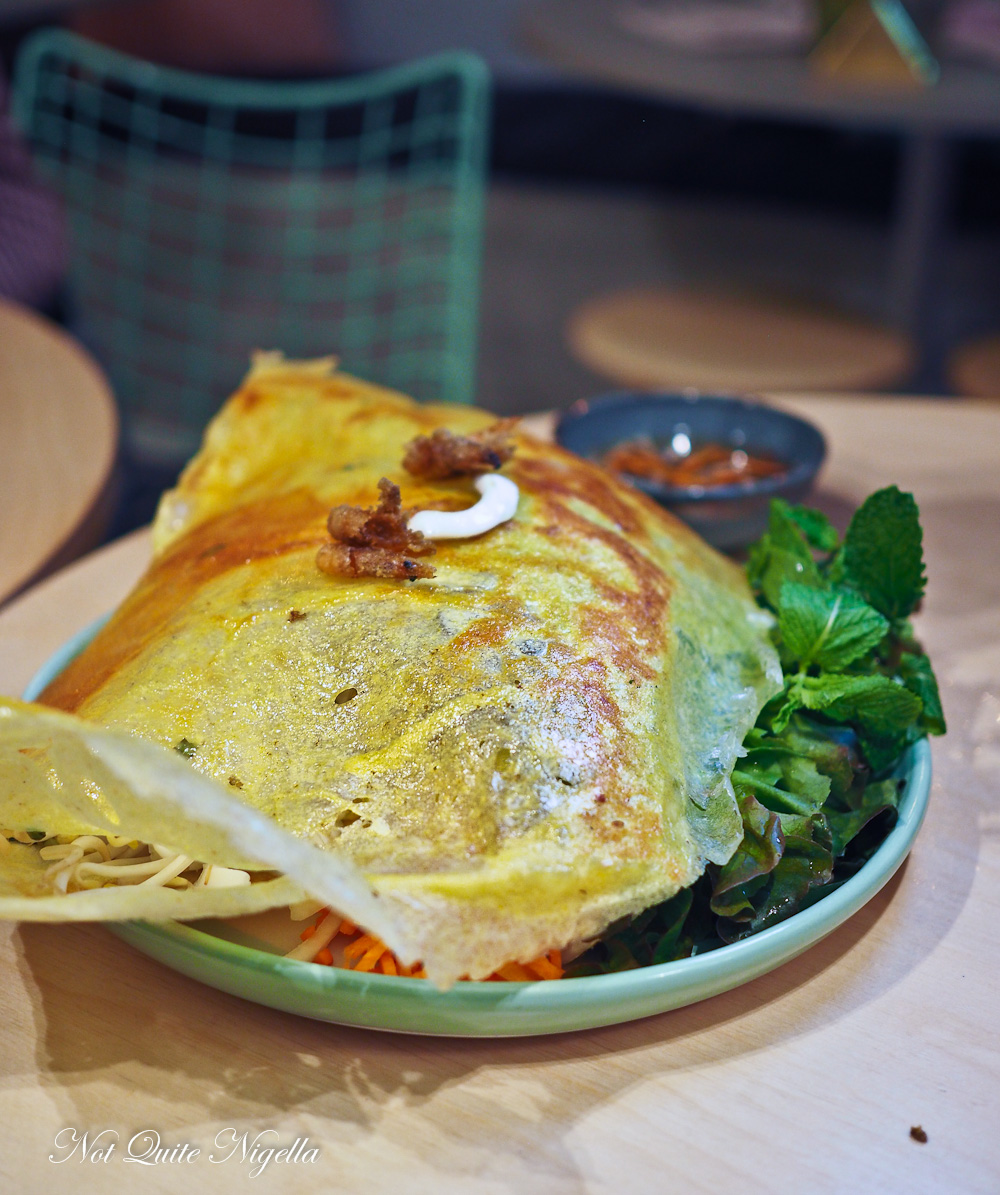 There is a banh xeo station here and there are three types of banh xeo, that delicious crispy Vietnamese pancake usually filled with pork and prawns. Along with the traditional one there is also a vegetarian and a seafood one, the latter which we go for. It's enormous and the crepe is beautifully crispy and filled with squid and prawns. It's a little hard to eat though and almost impossible to cut into wedges and dip into the sauce as you would usually do. I resort to taking off bits of it and then picking them up with chopsticks and dipping them in. 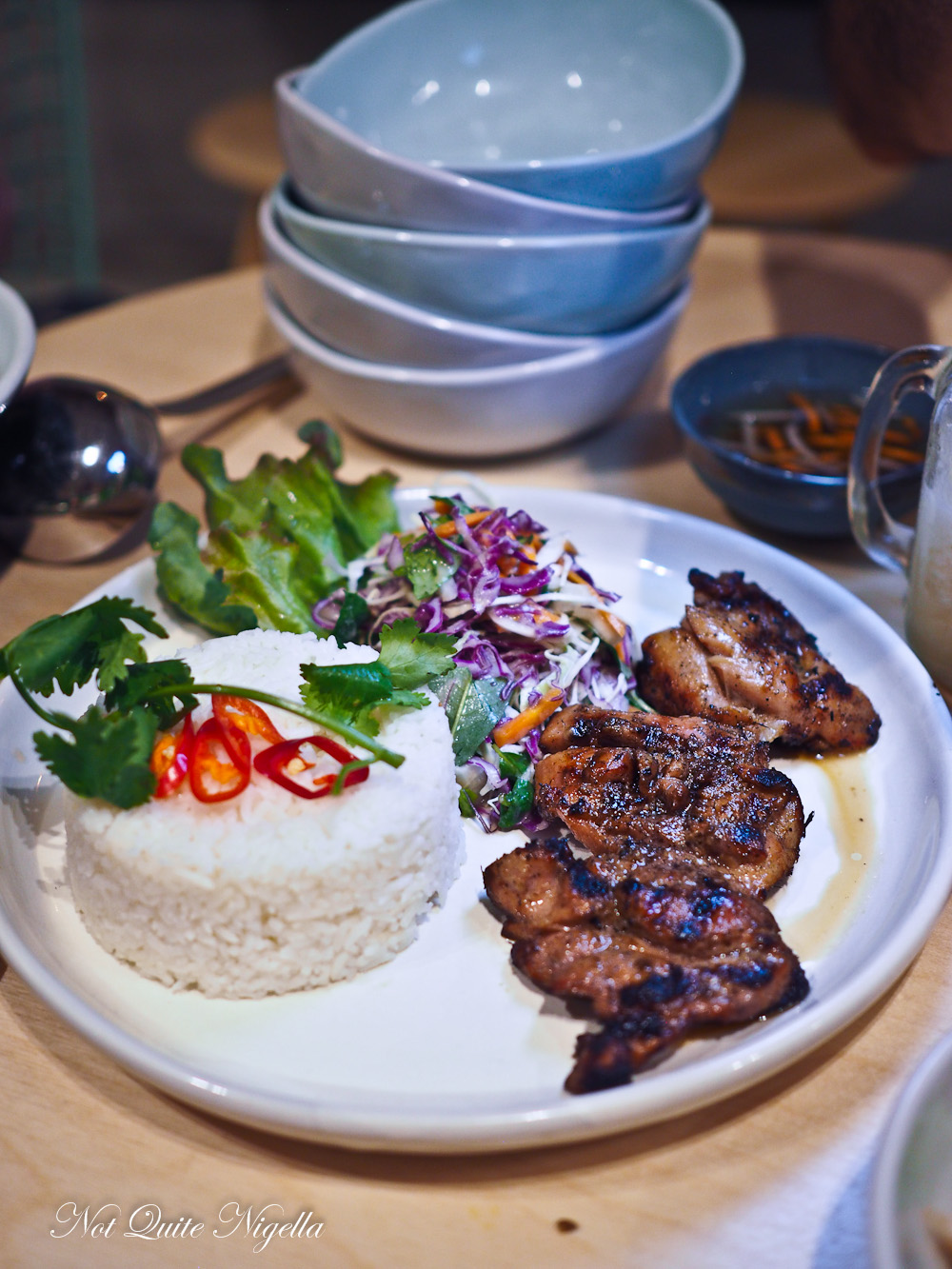 You really know that you're all related when you all turn up to a restaurant after you've all studied the menu online. But we were thrown a curve as the mains menu actually doesn't appear on their website. This is a grilled chicken, all succulent with an appealing about of sweet char. It is served with boiled rice and the best damn coleslaw with almost a nutty element to it. I've never had a coleslaw with a satay-ish element to it but you know what? It really works. 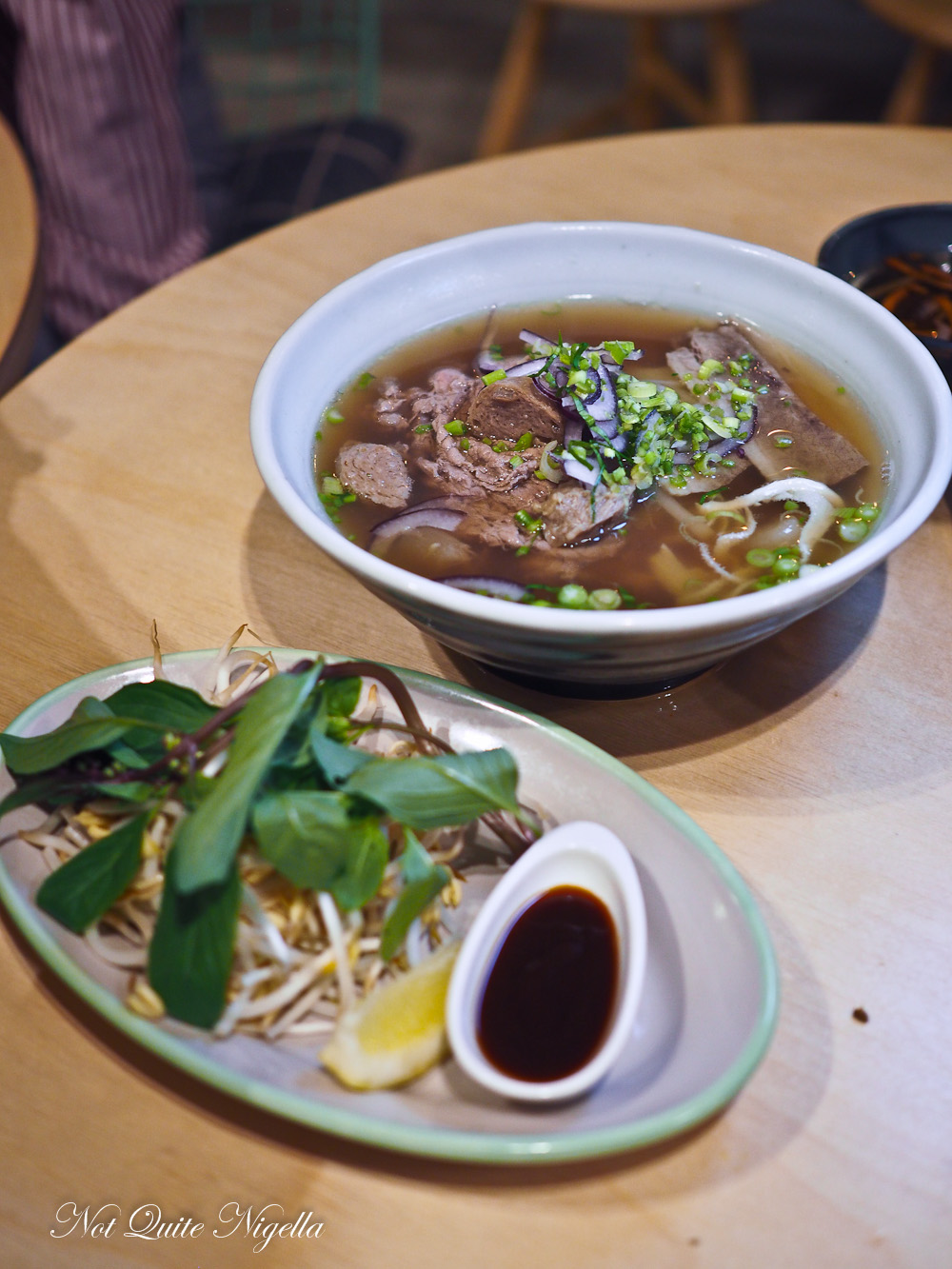 There are a few different types of pho and this one has a few varieties. Whilst it was generous with noodles and warming we felt like the broth wasn't quite as well rounded or full flavoured as others that can really draw you in with their complexity of flavour. 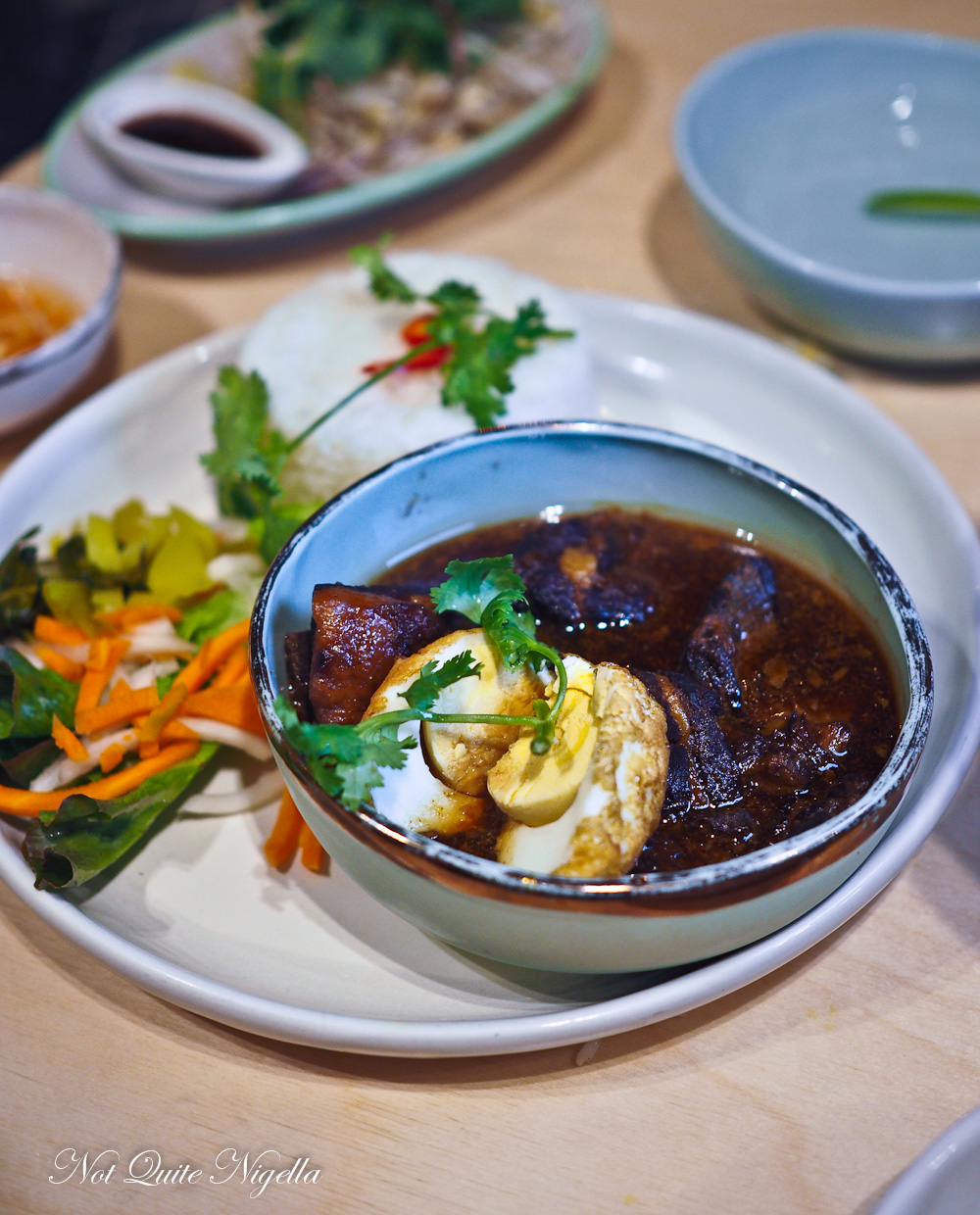 The other dish that we order from the mains menu is the pork belly and egg stew. Mainly because my mother is on a pork belly kick. It's caramelised and soft and comes with a battered egg with pickled mustard greens and steamed rice. I add a little of one of the side sauces to it to give it a bit more pep. 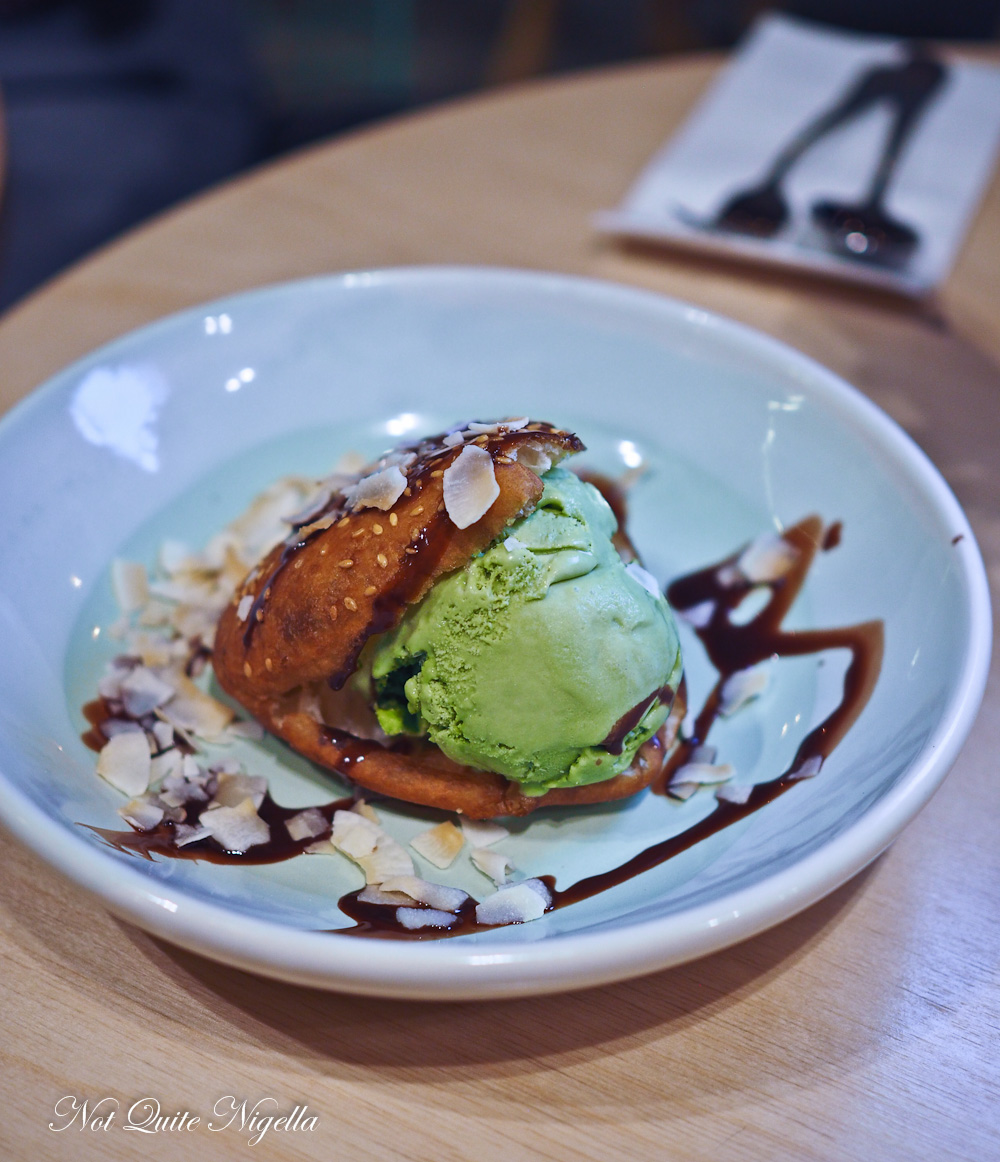 It's dessert time and what's not to love about a donut? I mean it's tasty and you don't have to fry it yourself (deep frying phobic here). This is a large banh tieu or sesame donut, split in half and filled with an enormous scoop of matcha ice cream. The donut is a bit hard to cut so perhaps the best tactic is to pick it up and bite into it. 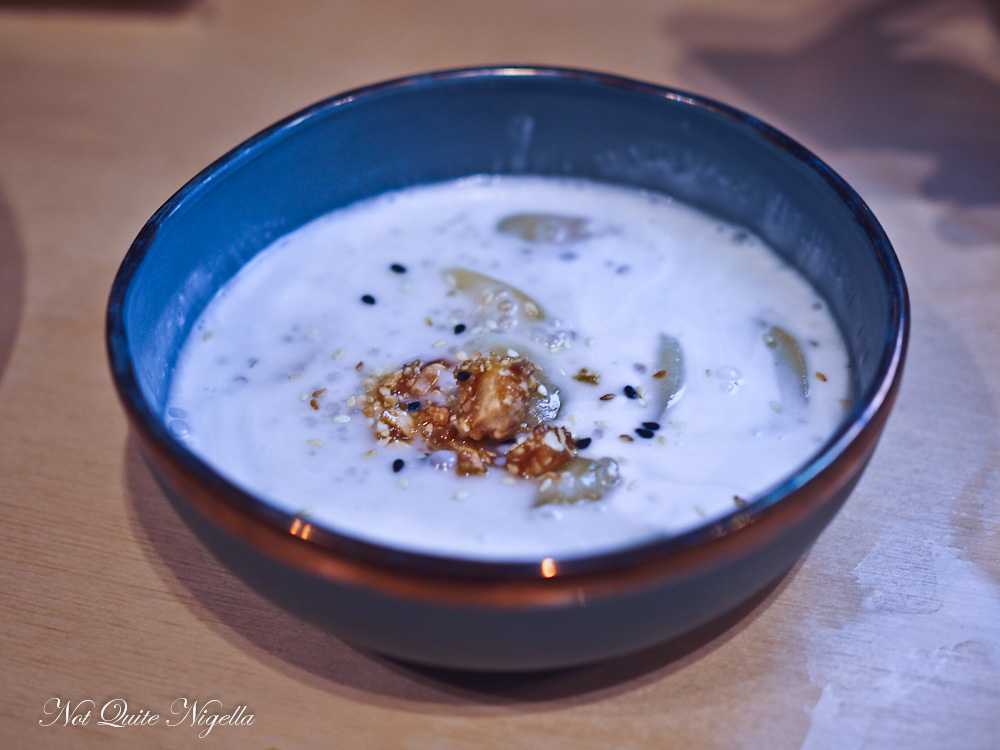 There's nothing quite like the sweet comfort of a tapioca pudding, especially when it is combined with coconut milk and banana pieces. It's a nursery soft pudding with a bit of candied nuts sprinkled on top for a bit of crunch.

So tell me Dear Reader, do you and your family study a menu online before visiting? Do you have any family rituals? Are there things you always have to order? 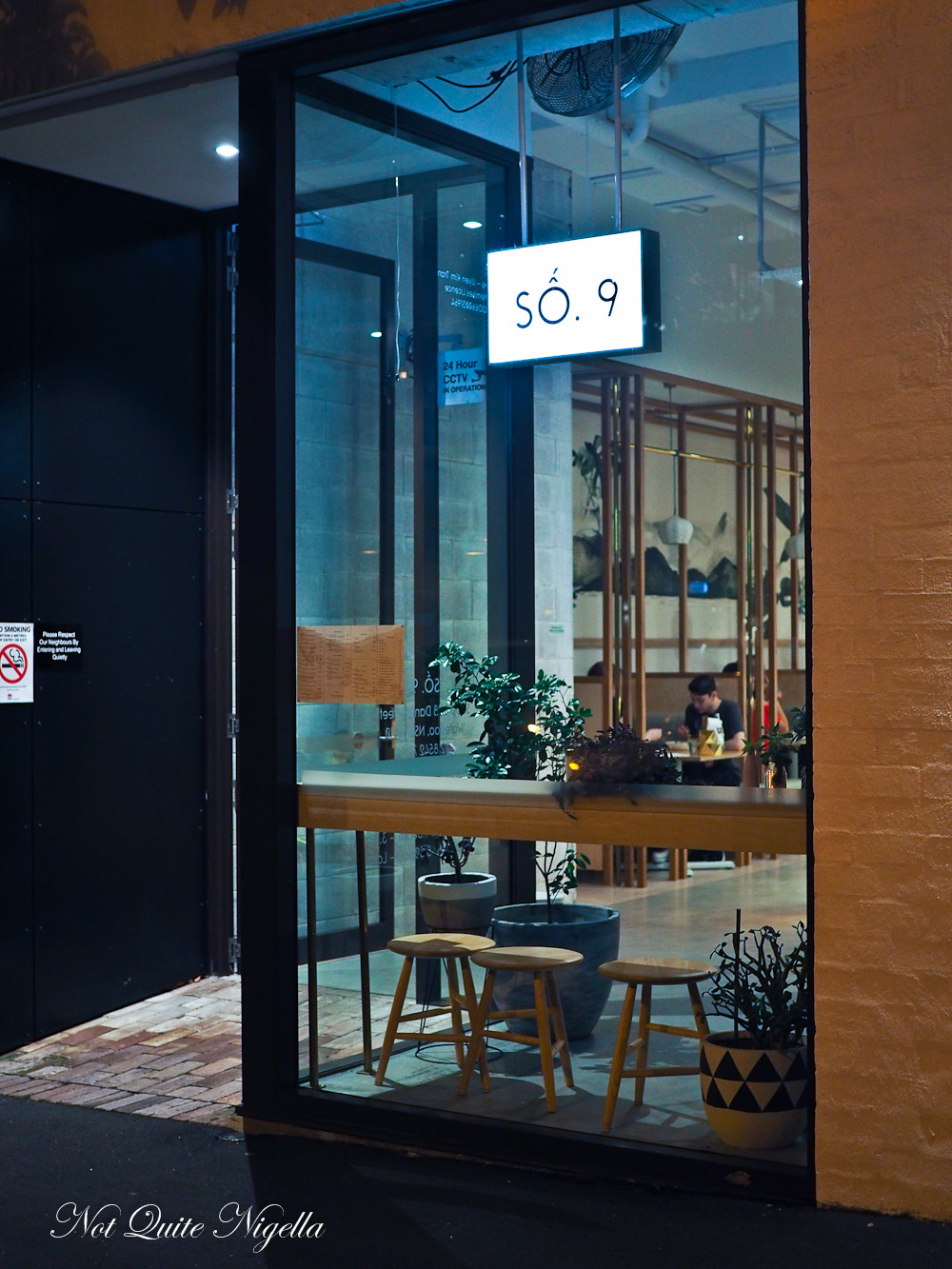