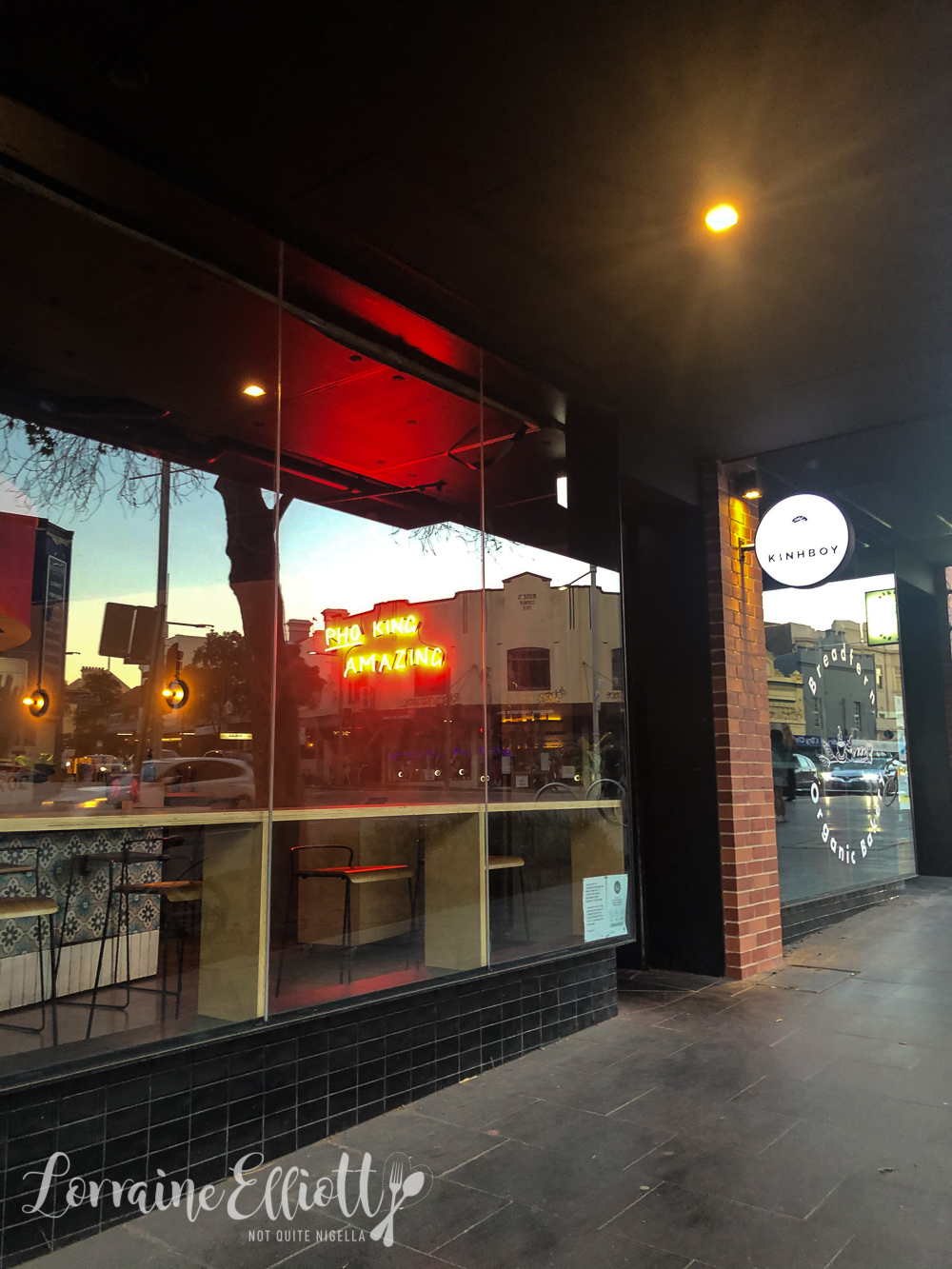 KinhBoy is a new Vietnamese fusion restaurant and sister restaurant to Tokki and Marble. It sits on Regent Street in the little cluster of restaurants next to Huxtaburger and Rara Ramen. On the menu there are three types of pho (including an amazing beef short rib pho) as well as crunchy tacos filled with prawns and pork belly, a Frenchified crispy skinned chicken plus a great cocktails list.

"So I can't eat anything tonight, I'll just pick. I didn't want to cancel," explains Sophia as she sits down with me. I once went out to eat with someone who only wanted to eat a bowl of fries and didn't really want me to order anything so I am slightly panicked but Sophia assures me that she will take her half home with her and that I can go ahead and order away.

The chef at Kinh Boy is Peter Wu formerly of Phomo at Barangaroo and his own food truck Mama Linh. He and his parents emigrated to Australia in 1988 from China. Guangdong is where his mother met his father when she fled Vietnam during the war. Both his parents were teachers in China but found easiest work was kitchen work. "Mum was first to get a job as a kitchenhand in a Vietnamese restaurant and was paid $4 an hour!" 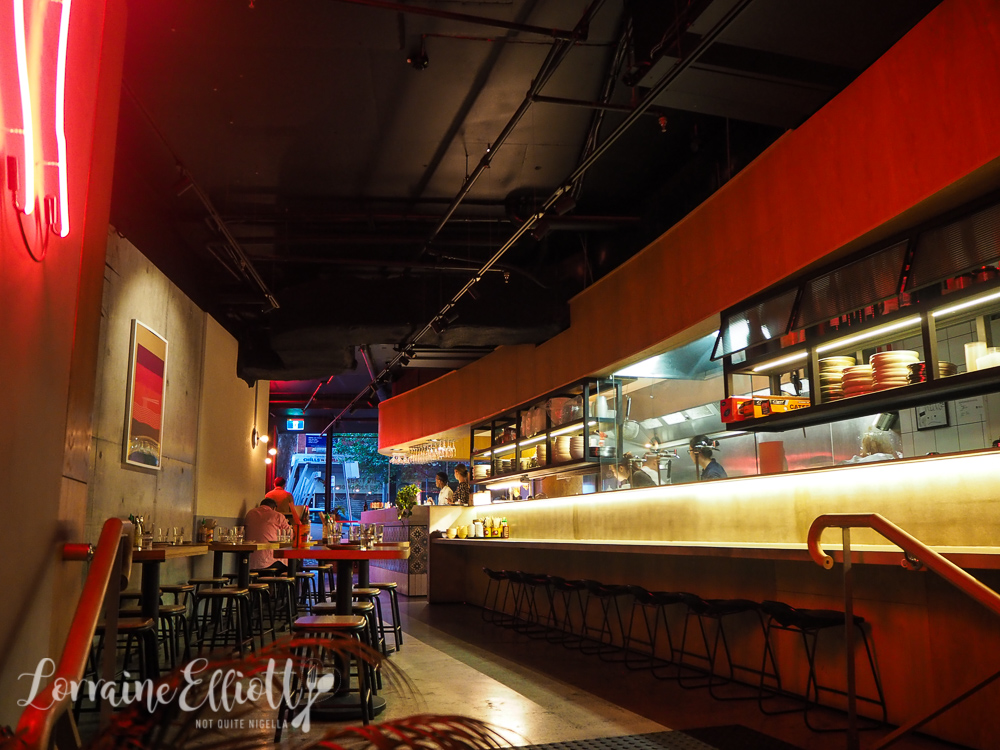 Peter's work background was in sales and he started two sales businesses but these didn't work out and he was in a financial black hole. "Mum still had a Vietnamese restaurant in Cabramatta so I ended up helping wait tables there for a while. At that time I knew I was done with the sales industry. Mums always had restaurants around Sydney for the past decade or so and even though the work was gruelling and hours were long she was still always content and happy somewhat," says Peter.

He opened up a small Vietnamese tapas bar in Newtown but when the relationship with the chef soured, Peter was thrust into the role of chef. "I’ve never worked professionally in a kitchen at this point, and although I was a decent home cook I never imagined to be cooking for customers. I had to adapt and learn quickly. I had to call mum to give me cooking tips. I had to google a lot and YouTube a lot to learn what I needed to learn. I still had to pay the rent, bills and staff wages so the show had to go on. Once I got the hang of it and hearing customers tell me my food was delicious I suddenly felt I could do this," explains Peter. 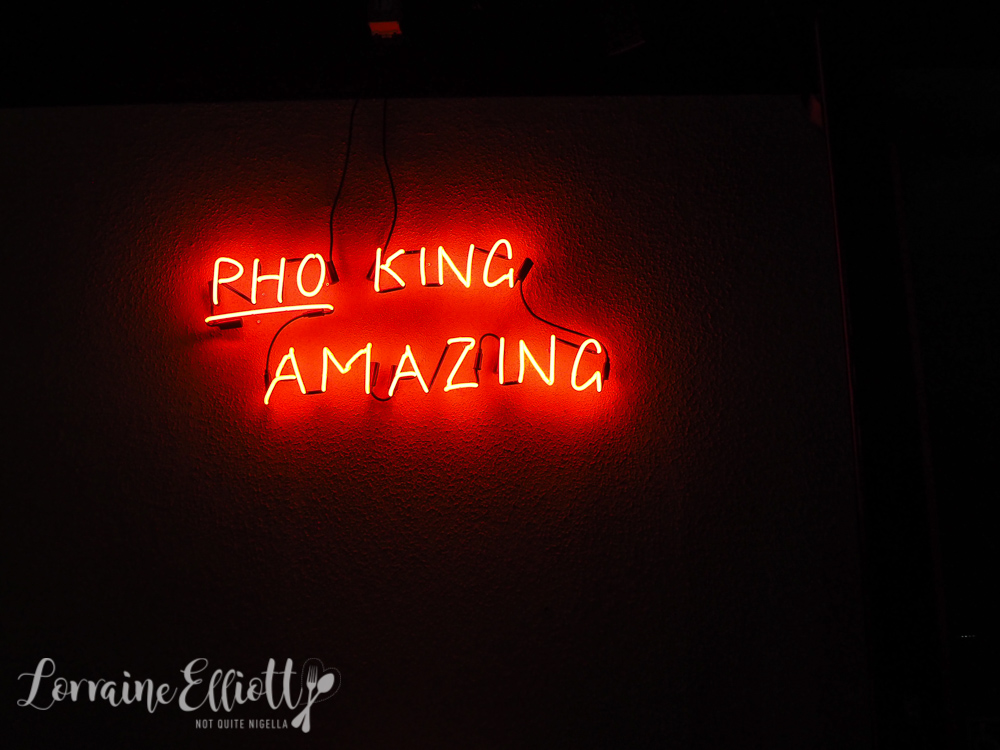 He then had two food trucks which he sold and then he decided to learn kitchen processes and operations from chefs at hospitality companies. Peter has been a chef for 3-4 years prior to his time at KinhBoy. Which takes us back to our meal. Our waitress is lovely and recommends a few dishes. There's also a list of cocktails that actually sound fantastic but Sophia doesn't drink and I don't like drinking alone (weird I know!). 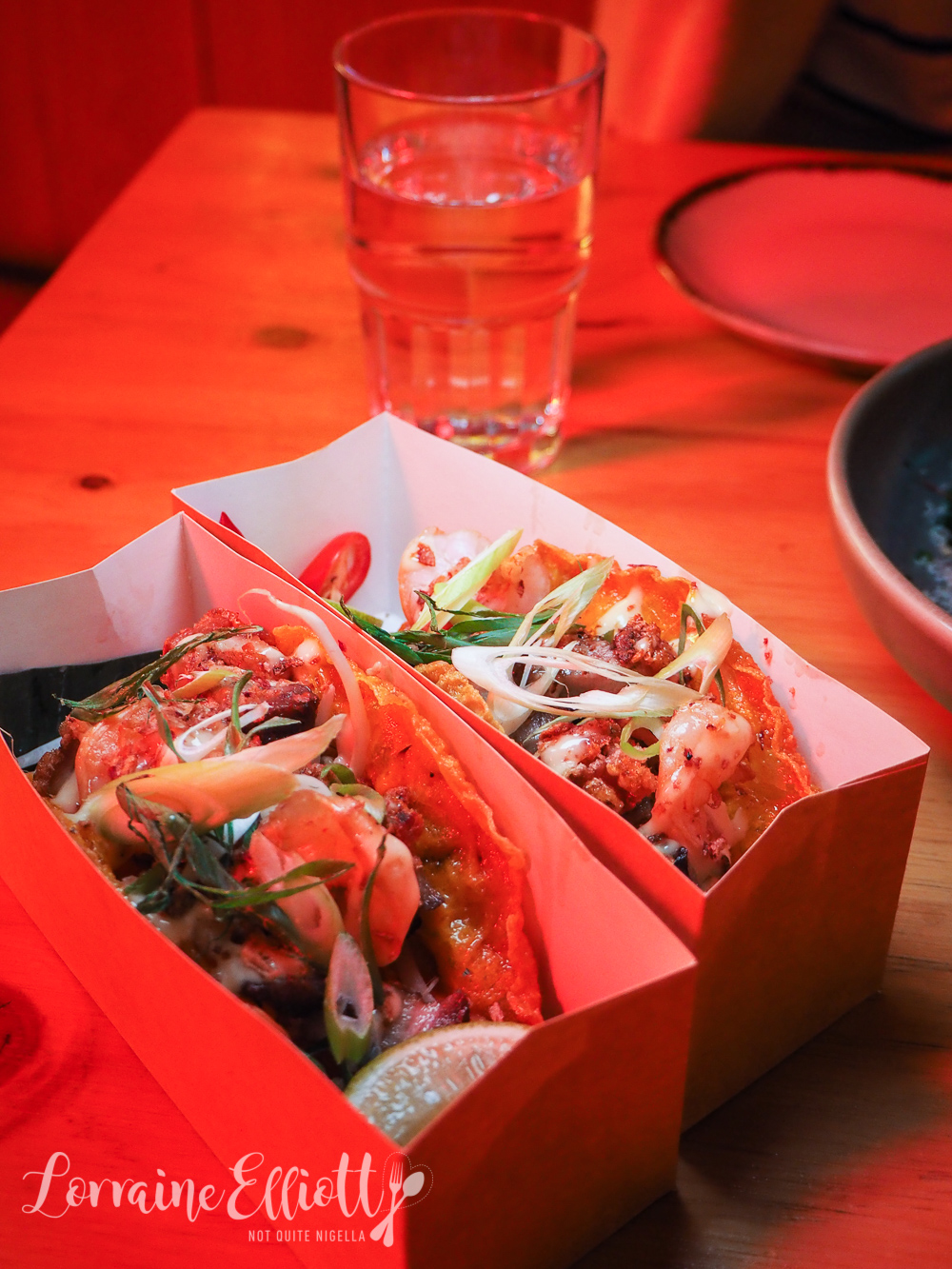 The tables in the back are darker with a red cast from the pink neon sign so I don't really know what I'm eating. All I know is that it is really delicious. The taco itself is a crispy taco filled with tiger prawns, pork crackling and a turmeric papaya green. The shell is inspired by the Banh Xeo crepe and is made of turmeric powder, rice flour and coconut milk which is cooked in 2 stages: first as a soft crepe and then deep fried and then shaped into a taco. It's also absolutely delicious and one of my favourite things of the meal. It's large although I would say that it's so good you may not want to share it so get one each. 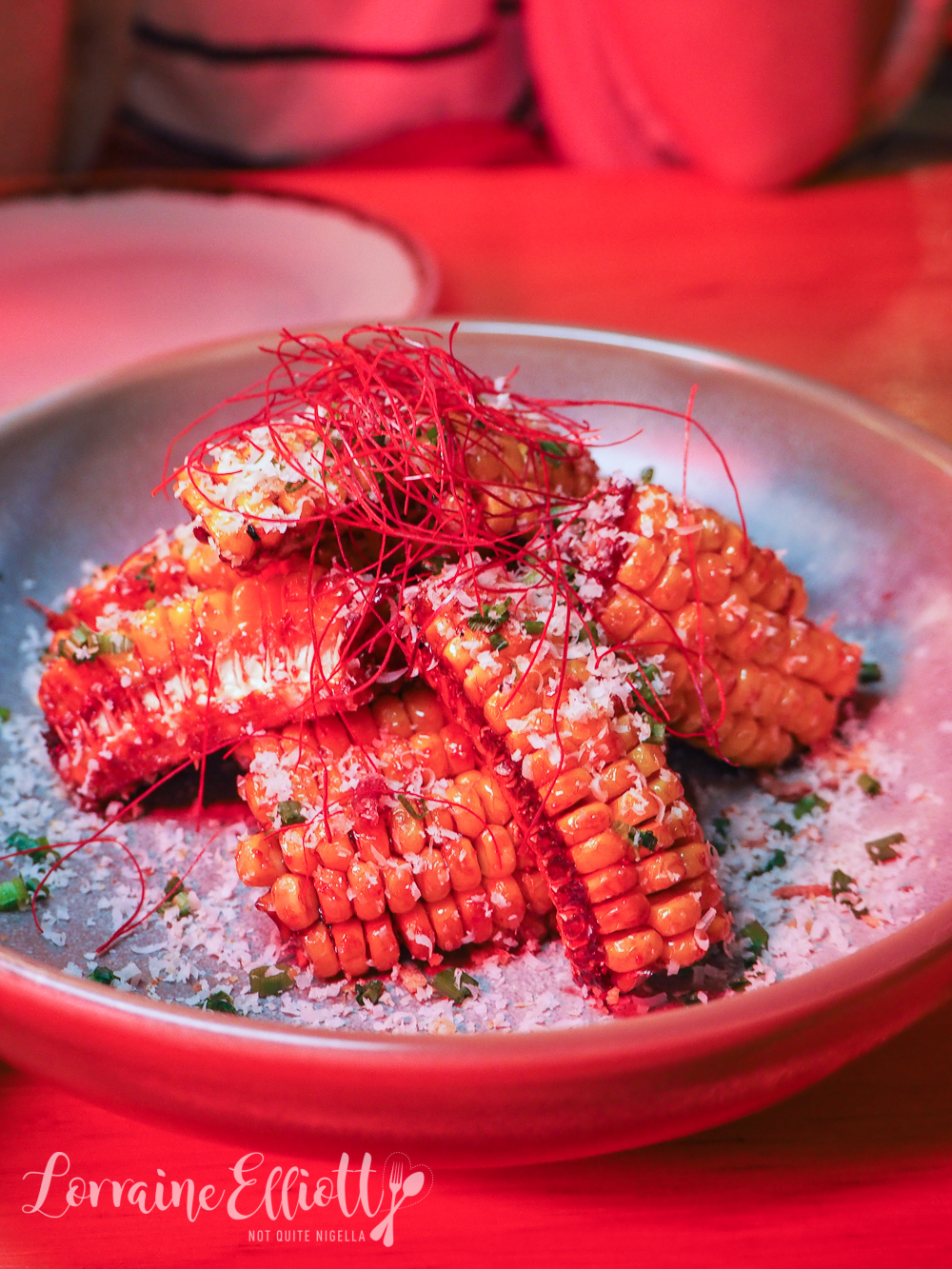 The corn ribs are dressed in a very moreish sweet soy seasoning to them that makes them even juicier. It is also seasoned with fried garlic and macadamia nuts. 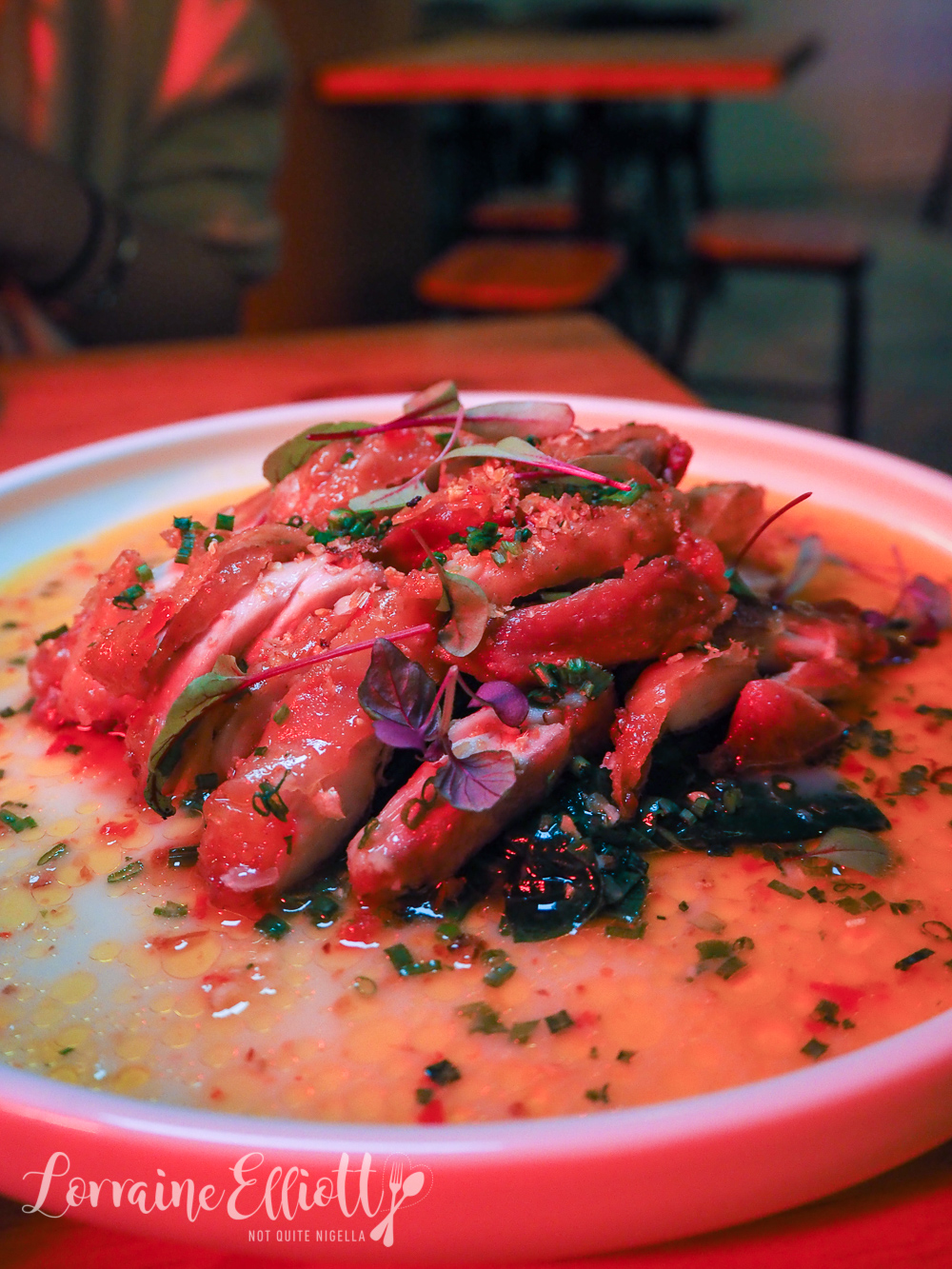 This was described to us as a Frenchified version of crispy chicken with its nuoc cham berrue blanc sauce. It's boneless chicken with a wonderfully crispy skin on a bed of spinach with fried garlic atop. You will want to get some rice to mop up that fantastic sauce. 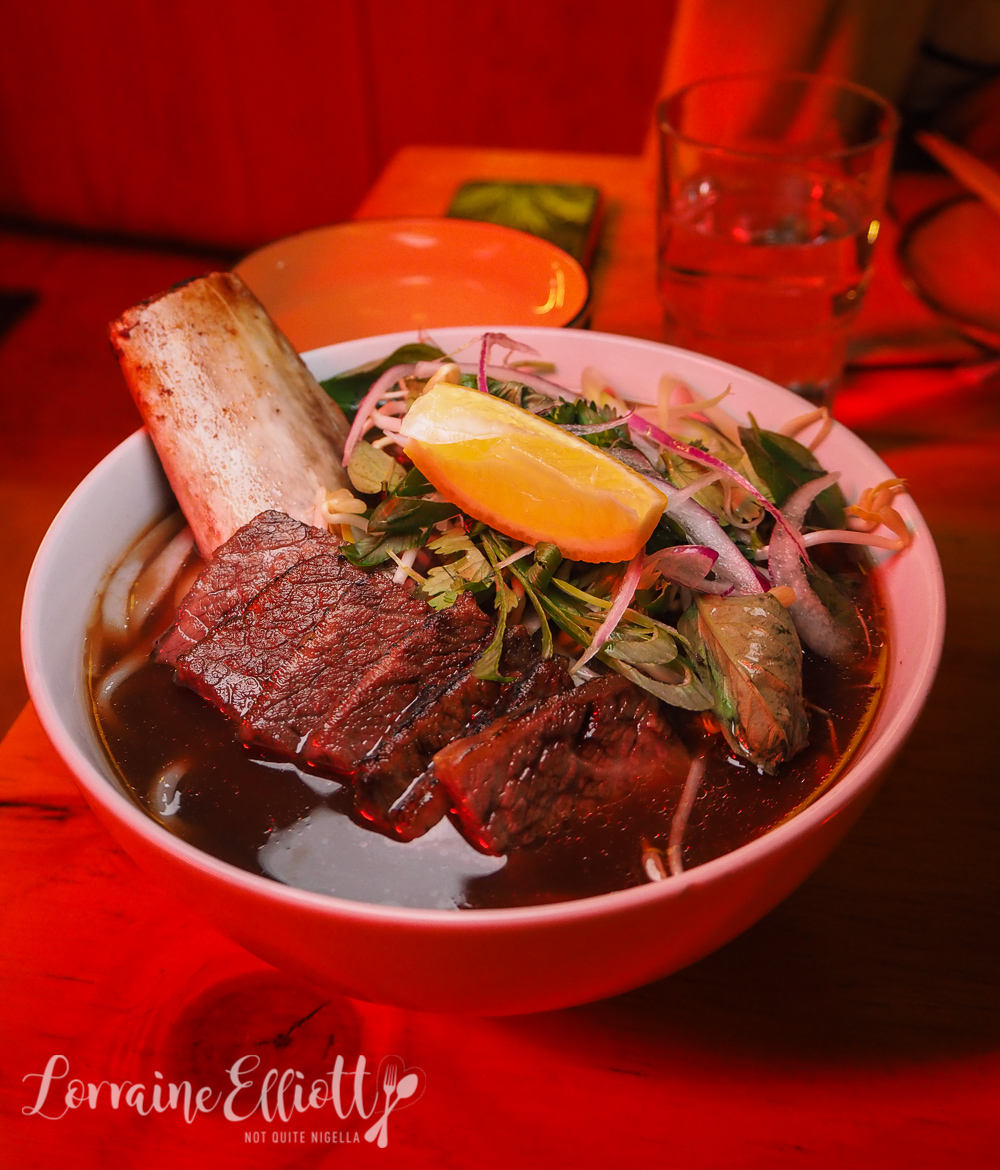 There are three types of pho on the menu and I was immediately drawn to the beef short rib version because I love that cut. For me, I don't really tend to add any sauces to my pho if the broth is good and this one is deeply flavoured and cooked for 18 hours. Peter explains, " I currently use about 30% more bone marrow to make my broth, and what I want to achieve is a thicker, velvety broth almost like a ramen. It’s a lot darker and beefier too with addition of rendered Wagyu fat." There's lots of slippery noodles and bean sprouts and one entire beef short rib with the pieces pre-sliced for easy eating. The beef just melts in the mouth. I'd order this again in a flash. 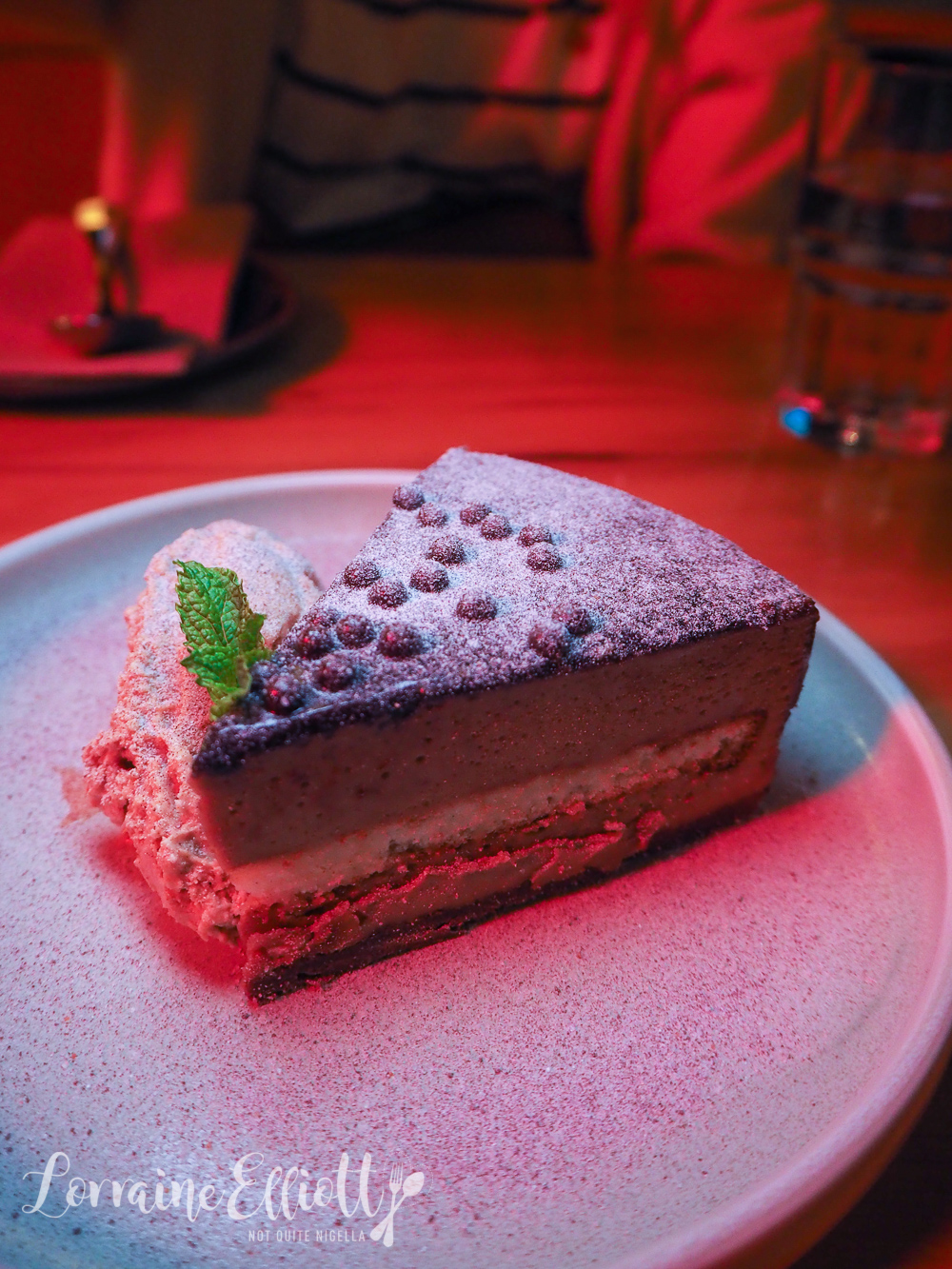 There's only one dessert on the menu and it's their version of a tiramisu. It has a bit more happening than that texture wise and there are layers of chocolate and coffee with crunchy balls on top and a crisp feuilletine base so you get crunchy and moussey textures at the same time. On the side there's a coffee ice cream that is a little icy in texture with a vanilla base and Vietnamese coffee powder folded through it. I end up eating half and Sophia takes the other half home!

So tell me Dear Reader, do you only drink if others are? Have you changed careers in your life? 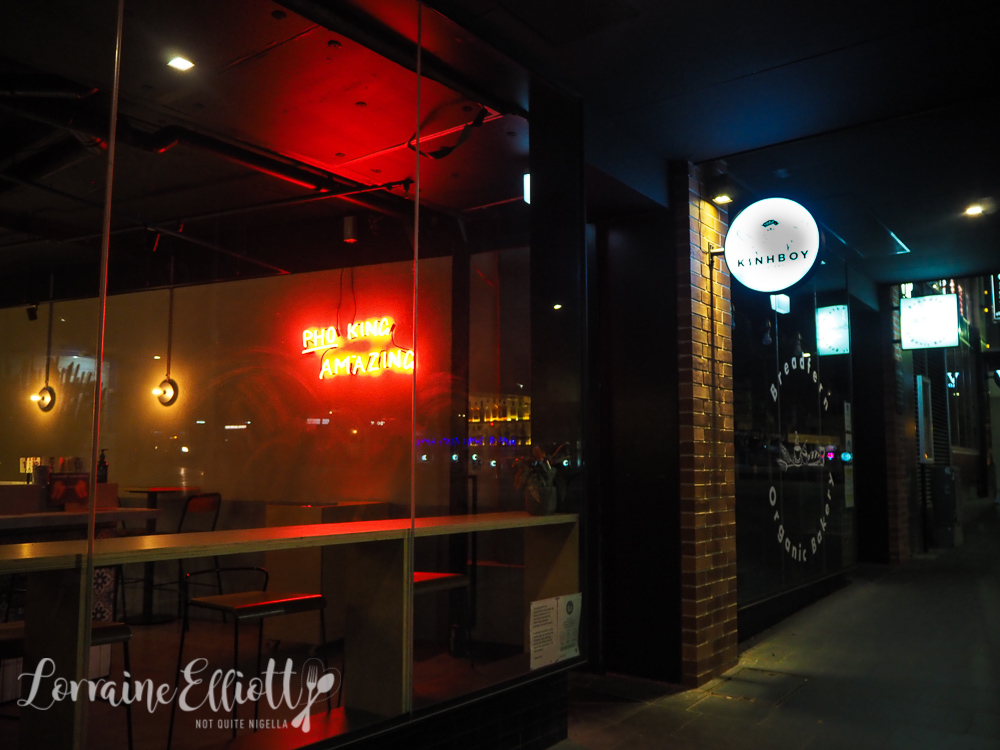