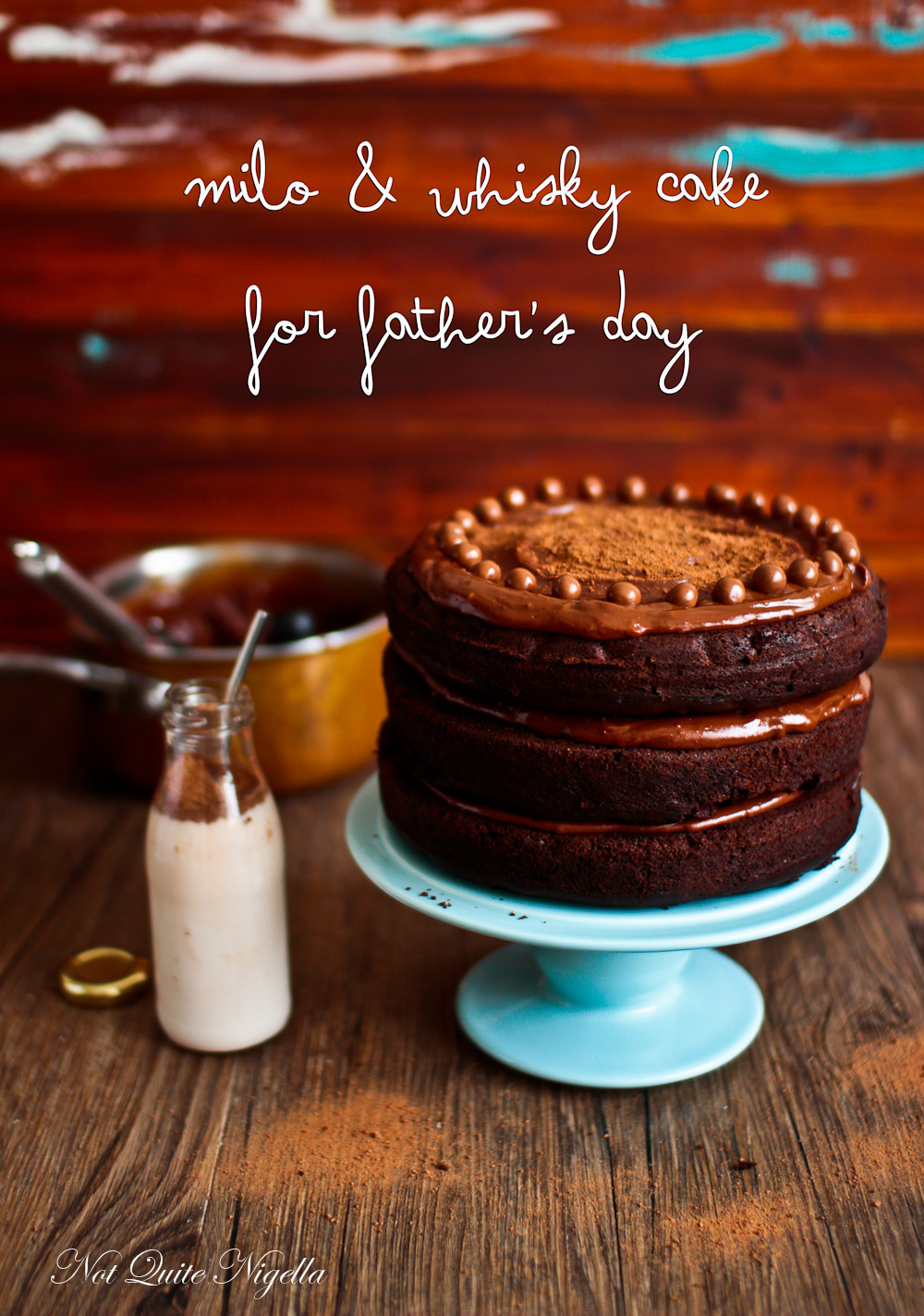 Looking for something delicious to make your father for Father's Day coming up? Or just looking for a kick ass cake that doesn't hold back in a rich chocolatey malt flavour? This triple layer cake is both of those things! It's an incredibly rich cake with plenty of dark chocolate enriched with whisky. And the frosting? Well it's a gorgeous, spreadable dreamy chocolate fudge frosting that is a cinch to make!

I never seem to get sick of making chocolate cakes although for me, the best thing really is chocolate rather than chocolate flavoured things. Having said that this has so much chocolate in it that it may as well as be considered chocolate with a bit of cake alongside ;) I kid, it's an incredibly soft and rich cake.

When paired with the amazing chocolate fudge sauce that I saw on Nydia's blog it comes together perfectly. It's a fudge frosting like no other that I've come across and it makes use of two things that are used a lot in South American cooking (Nydia is from Peru): evaporated milk and sweetened condensed milk. Because there isn't any icing sugar used, it doesn't have a grainy texture and is gorgeously smooth. Try it for dipping fruit in too as an alternative to frosting a cake. 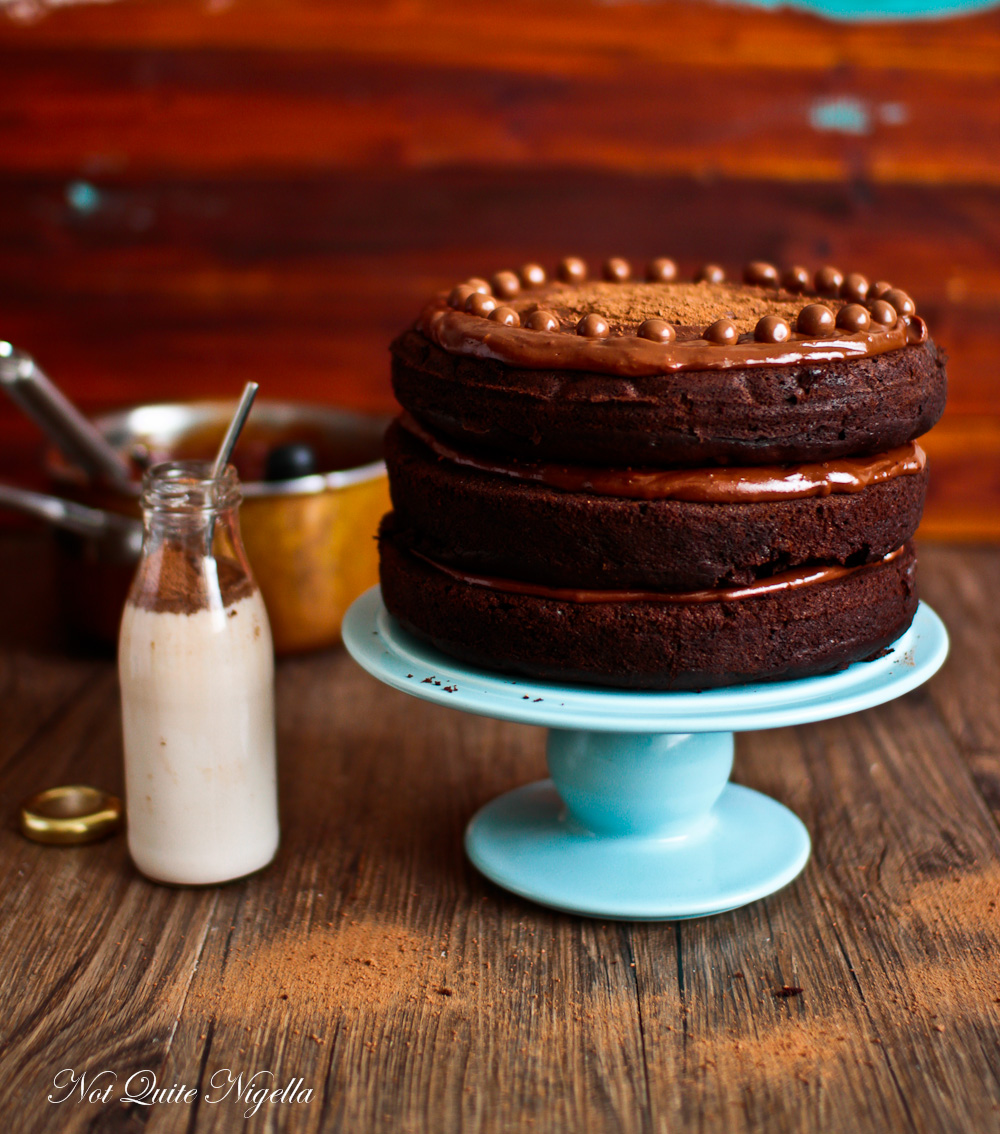 The quantity of fudge icing below makes enough to fill and ice a three layer cake between the layers and on top (although you might need more if you want to do the sides). This cake is a good size for a large Father's Day gathering although you could also halve the recipe to make one regular sized cake (thirdsing it will probably make it too flat). For those of you outside Australia that don't know Milo it's a malted chocolate drink mix that actually is a bit of a fail as a chocolate drink mix (as in it doesn't mix in to milk and sits at the top). But Australians being enterprising people that we are have found another way to eat it. By the spoonful from the tin or with the quantities reversed i.e. one part milk, five parts Milo.

I realise my father is quite unique and he doesn't like chocolate or whisky. He does like Milo though and this malted flavour is strong in this cake. We didn't eat much chocolate growing up, only on birthdays but I remember both he and my grandmother loved Horlicks before going to bed. They claimed that it helped them sleep.

Something has been keeping me up lately. It's a new television series called Stranger Things. Have you seen it? If you've either:

Then I think you might be as besotted as I am with this show. It's slightly scary (although for me the scariest bit was the first 10 minutes) but then I got drawn into the story of four kids who came across a mysterious and gifted young girl. It's such a delightfully compelling storyline and I won't ruin the surprise but the ending is fantastic. I loved the four kids so much that every time I watched it I became a kid again and could picture myself hanging out with them. They were so inspiring that when I was in Siem Reap I wanted to try riding a bike again. I figured if those kids could have such a fabulous time I might too! 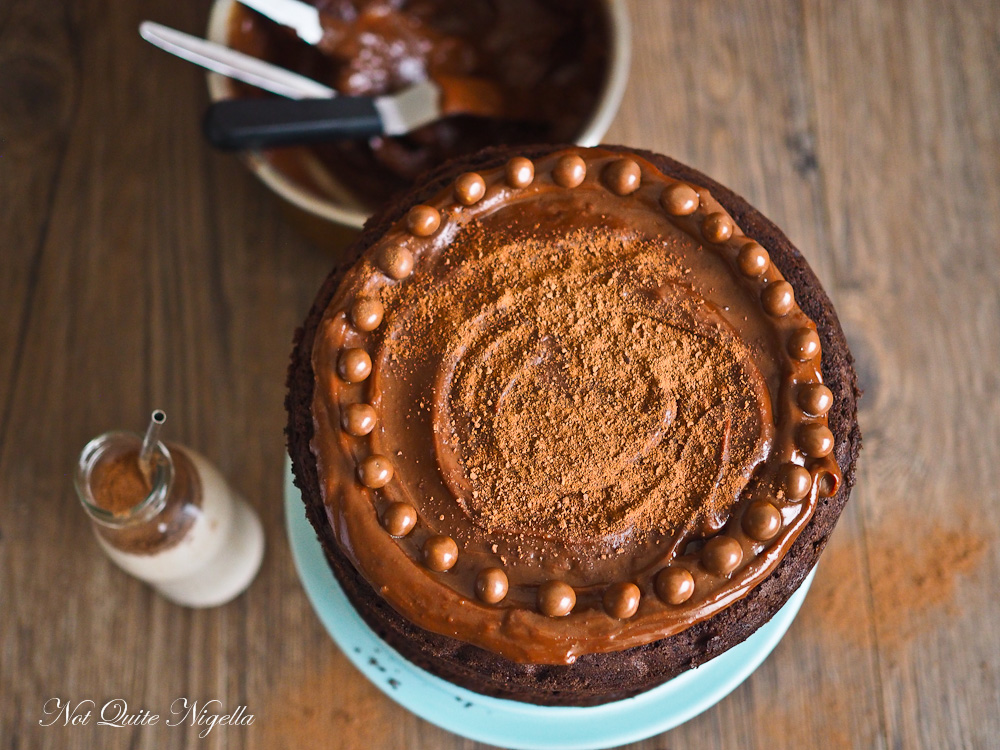 I didn't quite manage to master my bike like they did (but they did inspire me to keep trying). And I hope that this cake inspires you to make it!

So tell me Dear Reader, what are you going to do this year for Father's Day? And do you love Stranger Things? And how do you eat your Milo?

*Make 1 cup of cake flour by placing 2 tablespoons of cornflour/fine cornstarch in a jug and top up to the 1 cup mark with plain flour.

Step 1 - Preheat oven to 160C/320F. Line three 20cm/8inch round tins on the base and sides. Whisk the cake flour with the bicarb and salt. Sift in the cocoa powder and then add in the brown sugar and stir. IN a jug whisk the soda water, melted butter, sour cream, eggs and whisky. 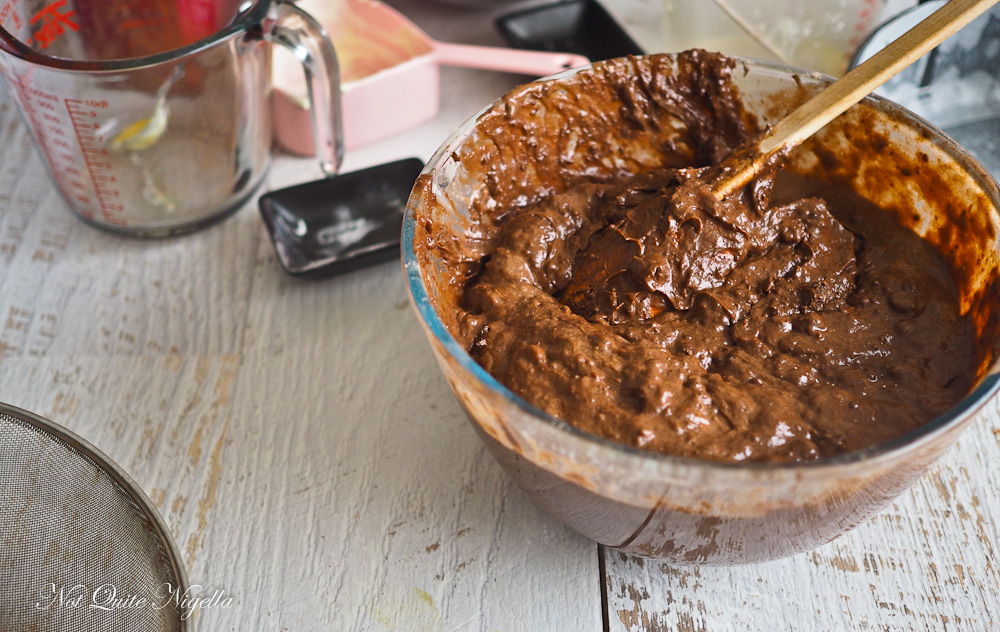 Step 2 - Add the chocolate chips into the flour mixture and make a well. Add the wet ingredients into the well in 4 or 5 lots stirring with a spatula. Divide into the three cake tins and bake for 30-35 minutes or until a skewer inserted comes out clean. Cook completely in the tin. 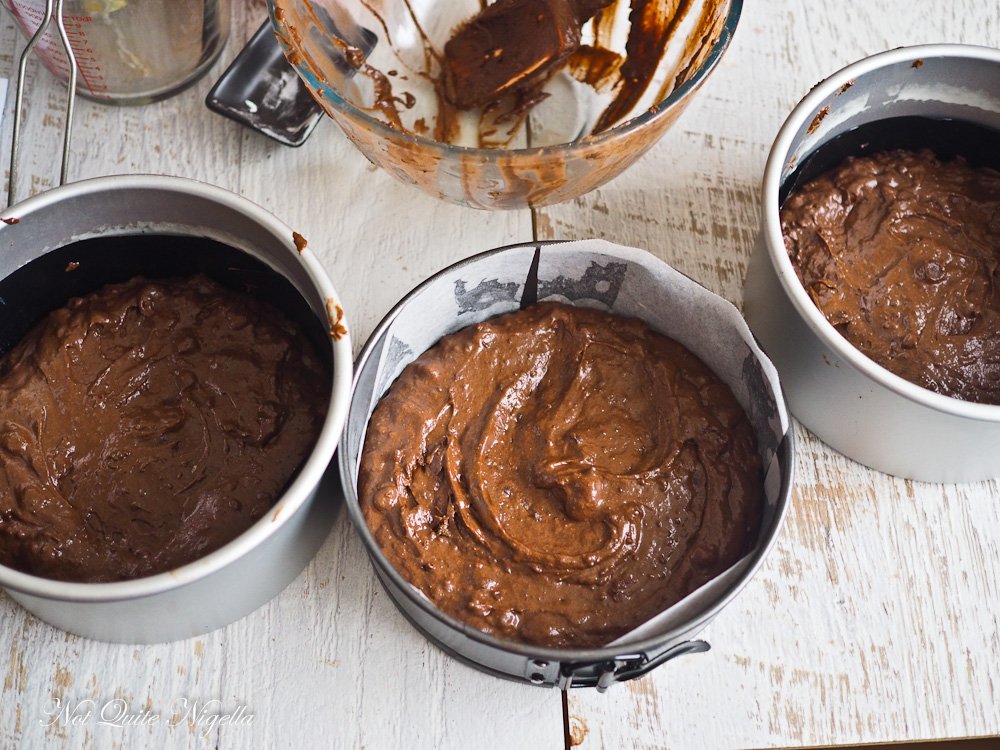 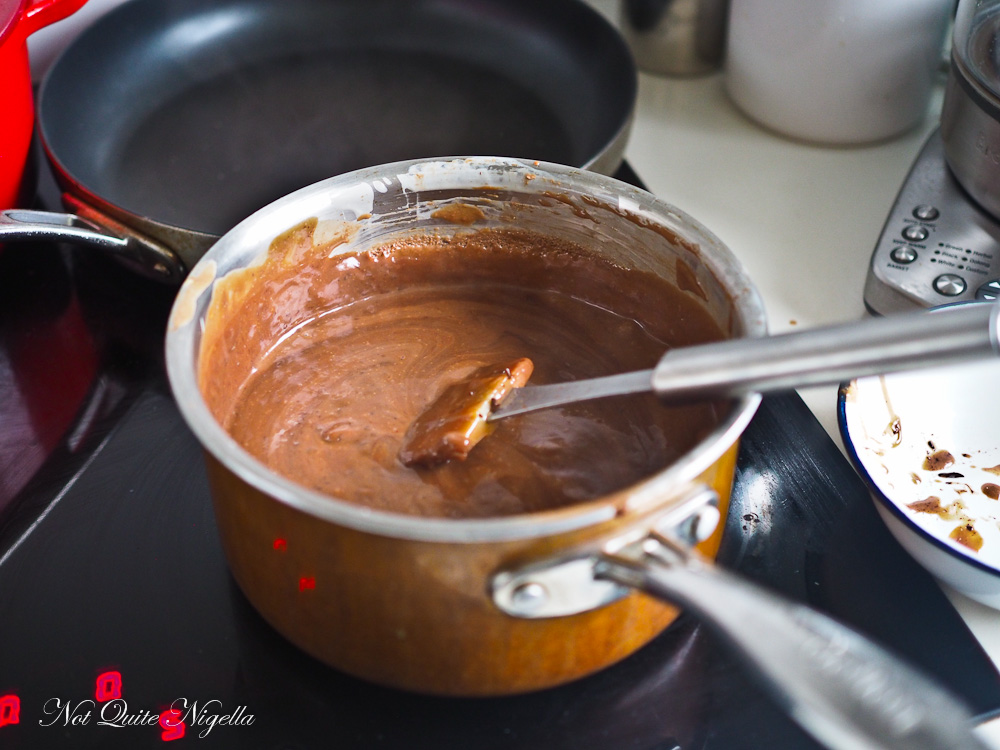 Step 3 - Make the frosting. Heat the evaporated milk, condensed milk and the chocolate in a saucepan and whisk until smooth. Then increase the heat until bubbling and stir and cook for about 10 minutes or so using a flat bottomed spatula to make sure any bits don't catch at the bottom. Once thick in texture (the longer you cook it the thicker will be), then remove from the heat and place cling wrap on the surface of the frosting. It will thicken a lot more on cooling. 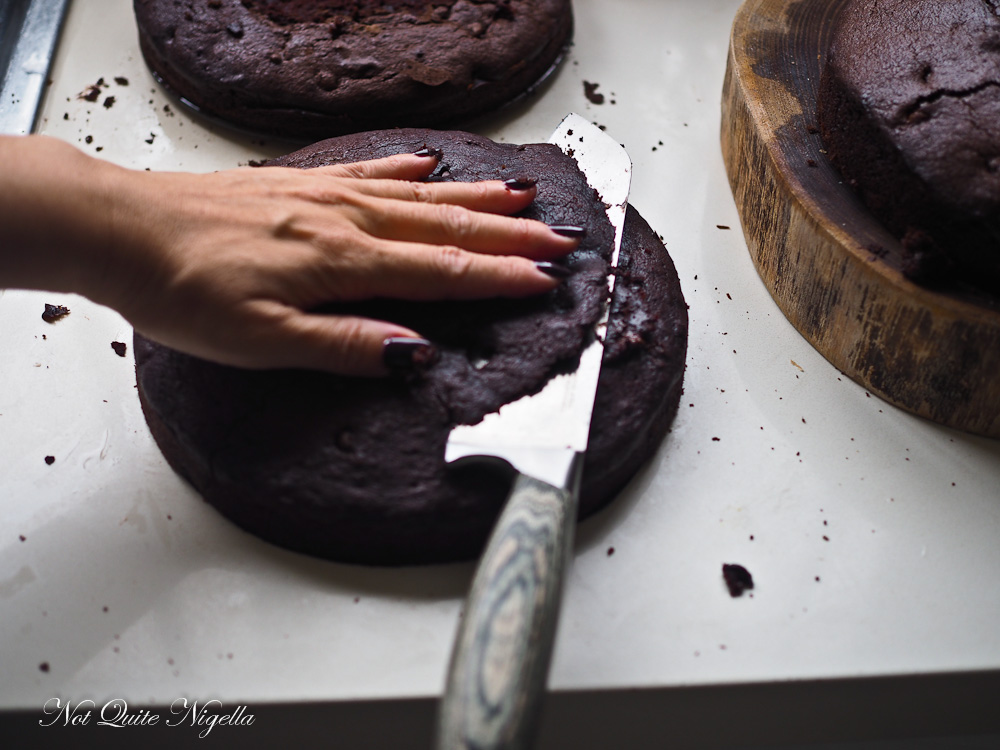 Step 4 - Trim the domes from the cakes and place one cake cut side down on the cake plate. Spread with some of the frosting and then 2 heaped tablespoons of Milo. My frosting was still a bit warm so I put this cake in the fridge so that the icing could firm up before adding the second layer. Repeat with the other layers. Decorate with the malted chocolates. 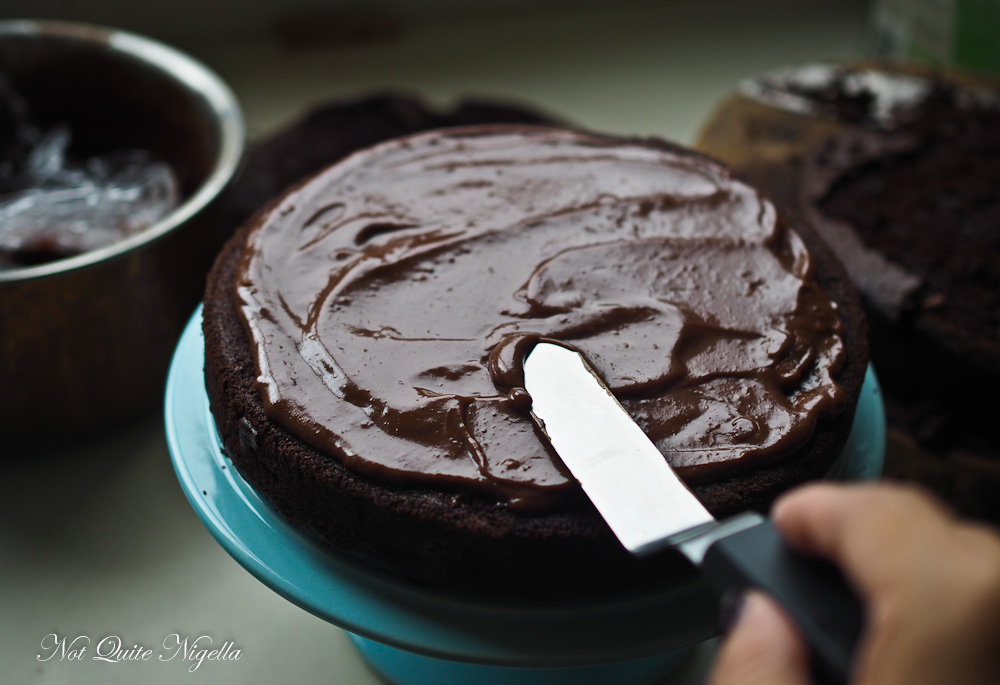 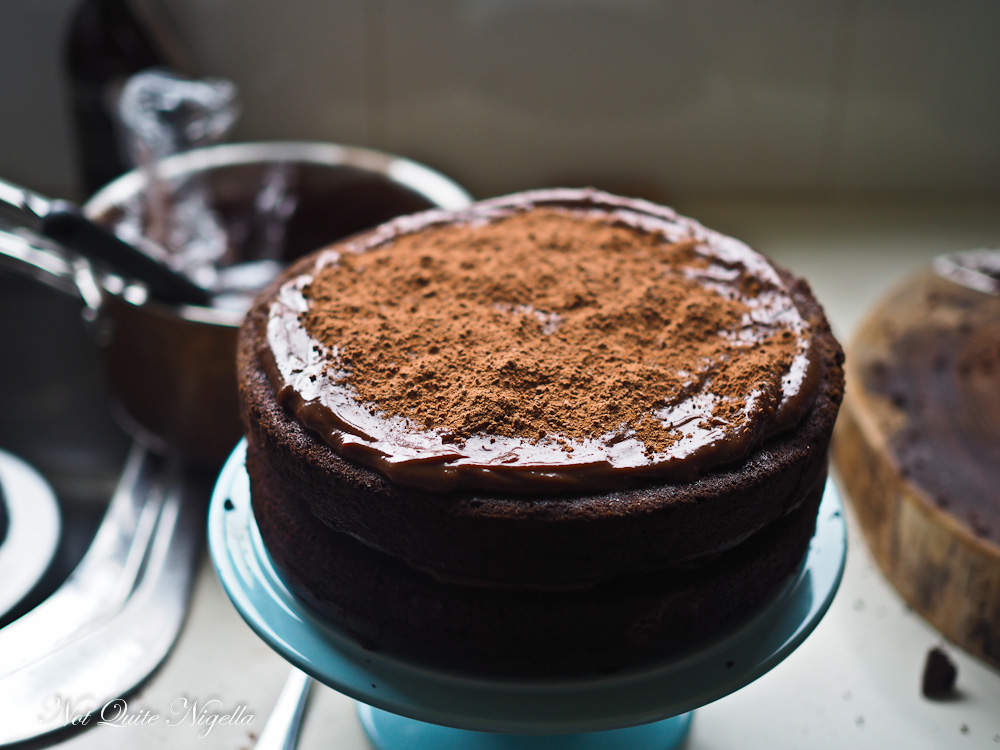 For the leftover cake from trimming the tops, you can make truffle balls. Crumble up the extra cake and mix with enough fudge icing to hold together. Roll in sprinkles and serve! 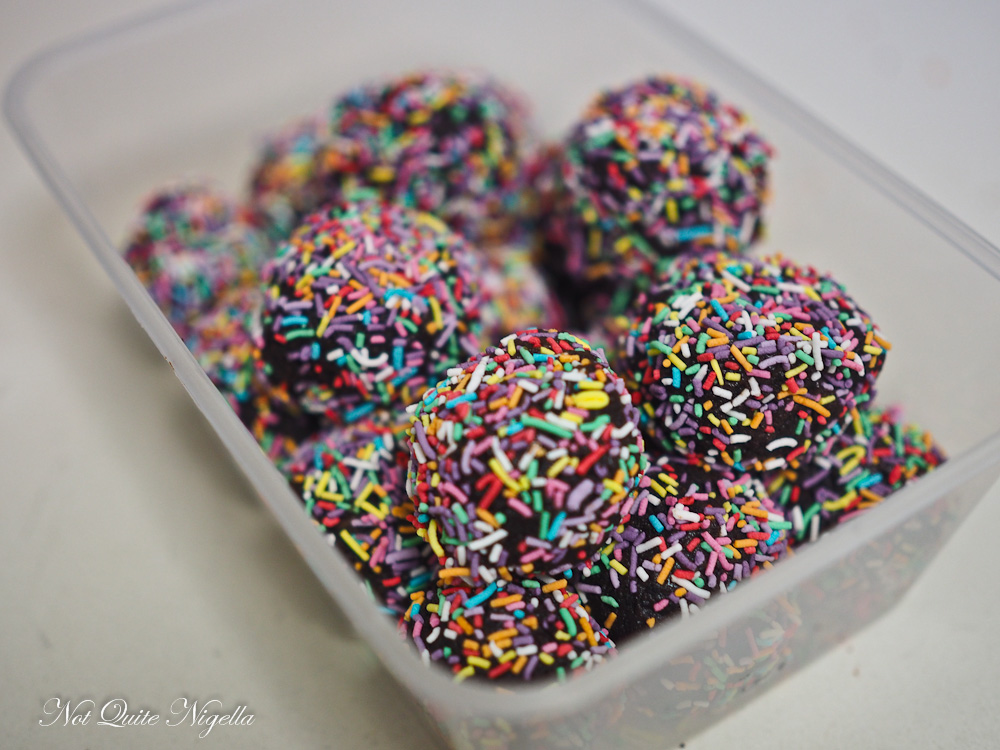