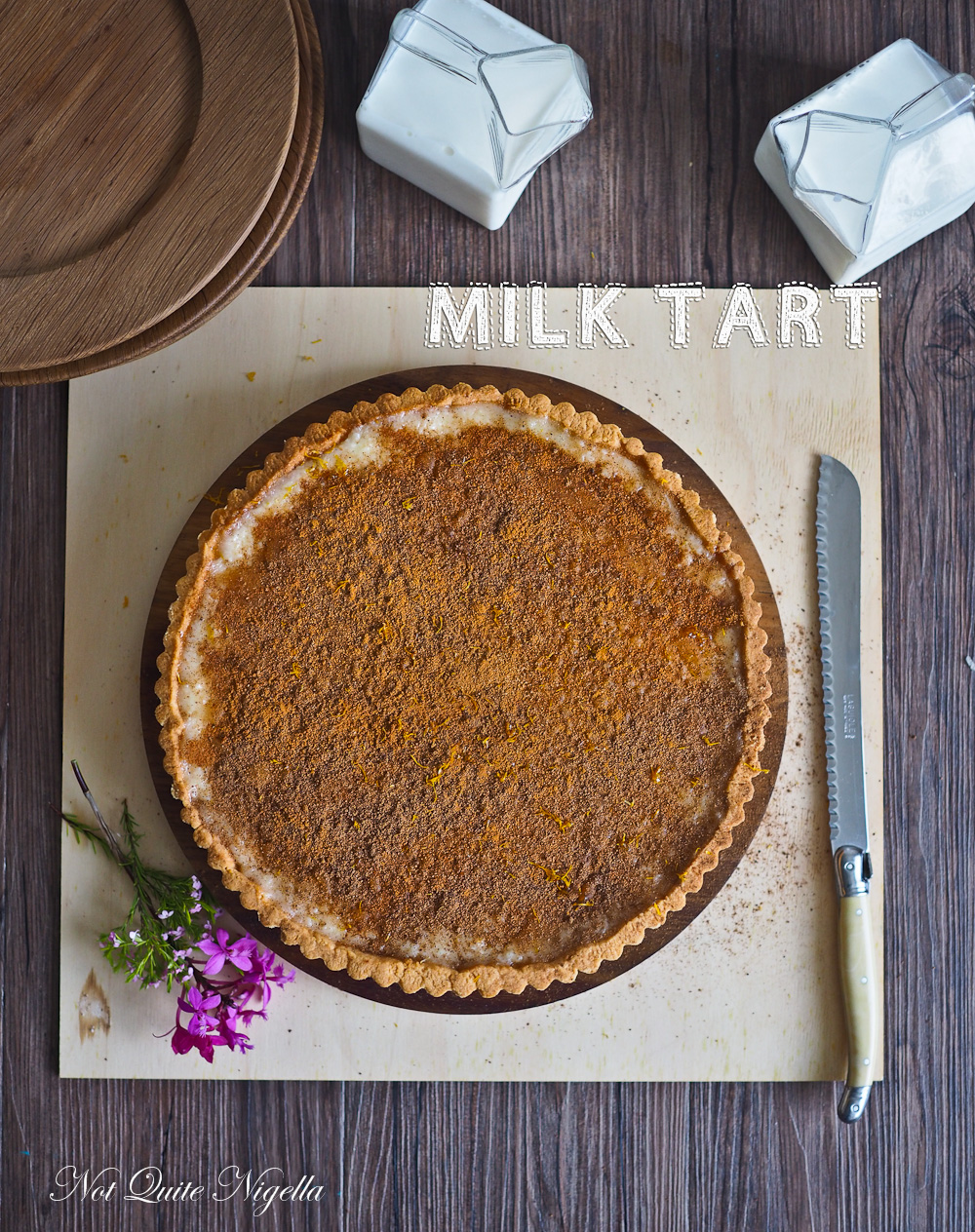 A milk tart or melktert in Afrikaans is as the name suggests, a tart whose main ingredient is a milk based custard. With its Dutch spice origins, the tart is sprinkled with a generous amount of cinnamon sugar on top. It smells as good when it is baking that the only tough thing is waiting until the next day to eat it!

This classic South African dessert was one that I tried several times when I visited South Africa. For my milk tart recipe I turned to Nina who hails from South Africa. She quickly furnished me with four recipes, all of which shared some similarities but differences, mainly in quantities.

These recipes were a bit older and quite general without pan measurements so they required quite a bit of tinkering with. There were two types of pastry: one with egg and one without. I liked the sound of the pastry with egg that required creaming of butter and sugar as it sounded a bit like a sugar cookie. The custard centre has a combination of flour to thicken and eggs to set it. The only difference I made was to add a generous amount of ground nutmeg to the dish as well as lemon zest. The nutmeg is an homage to my favourite old skool Australian bakery treat and the only thing that catches my eye at the supermarket bakery, the nutmeg dusted custard tart. 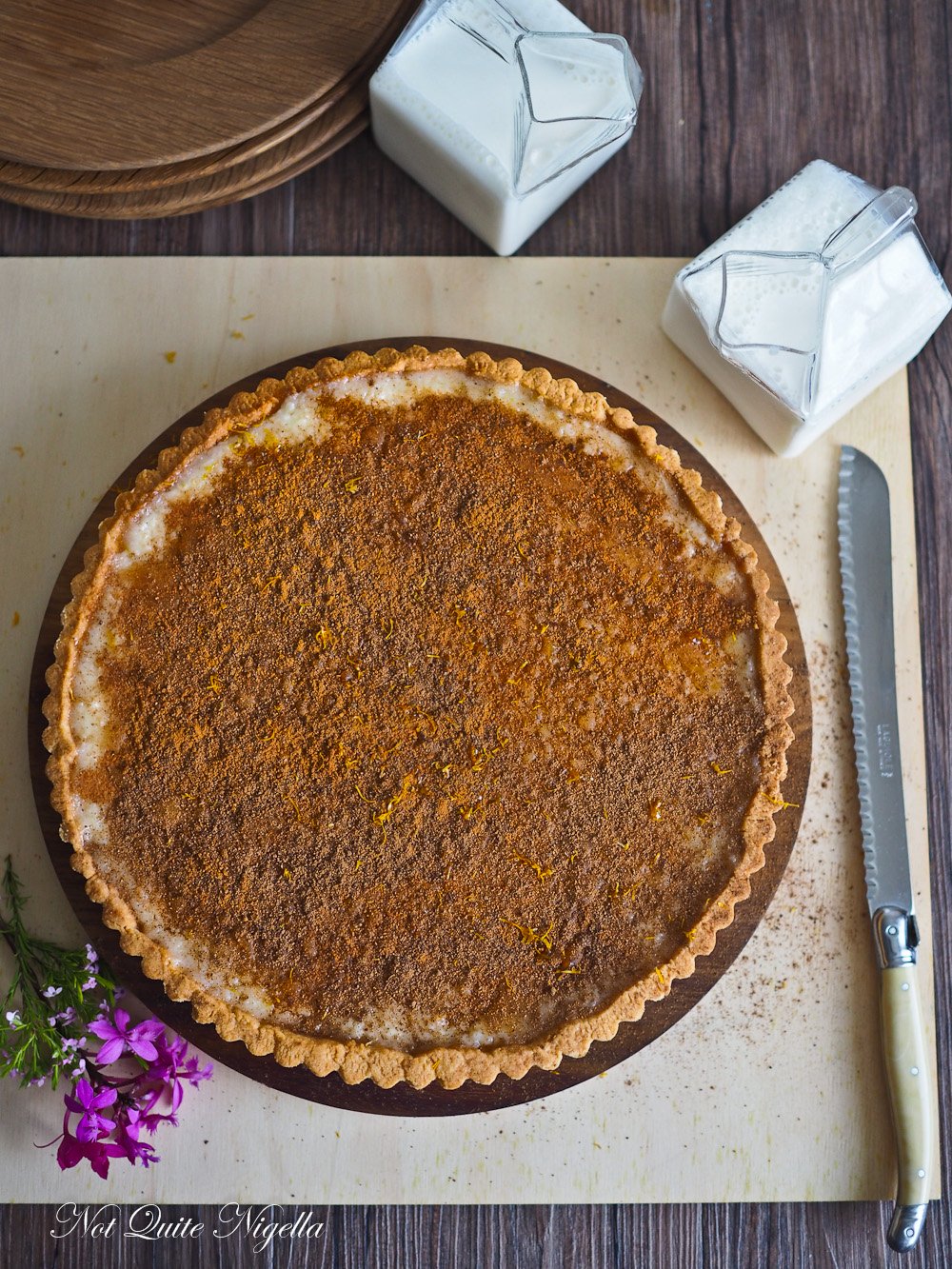 Although I usually like baked treats warm from the oven, this was good but it really came into its own when it was chilled and sliced. The custard is not stiff and retains a wonderful creaminess even when cold. If you love Australian custard tarts this is a very close cousin to it. It's absolutely wonderful and the combination of cinnamon, nutmeg and lemon zest add depth to the milky wobbly custard centre and short biscuitty base. If you are pressed for time, make the pastry one day and the filling the next. If you are a custard fan, I urge you to give this a go-I don't think you'll regret it. And yes lovelies, this is a pushy recipe.

Speaking of Nina and her fiance Garth, I was worried that they might have some regrets after doing an escape room with us. Garth is a conscientious student (he is a sporty geek much like Mr NQN) and we met beforehand to discuss our strategy. Yes I am one of those people that wants to win, I think escape rooms are non sporty versions of team sports. The end result of the pre-game chat was not ideal-I think I panicked Garth and the poor thing had to visit the bathroom several times before starting because he was so nervous. 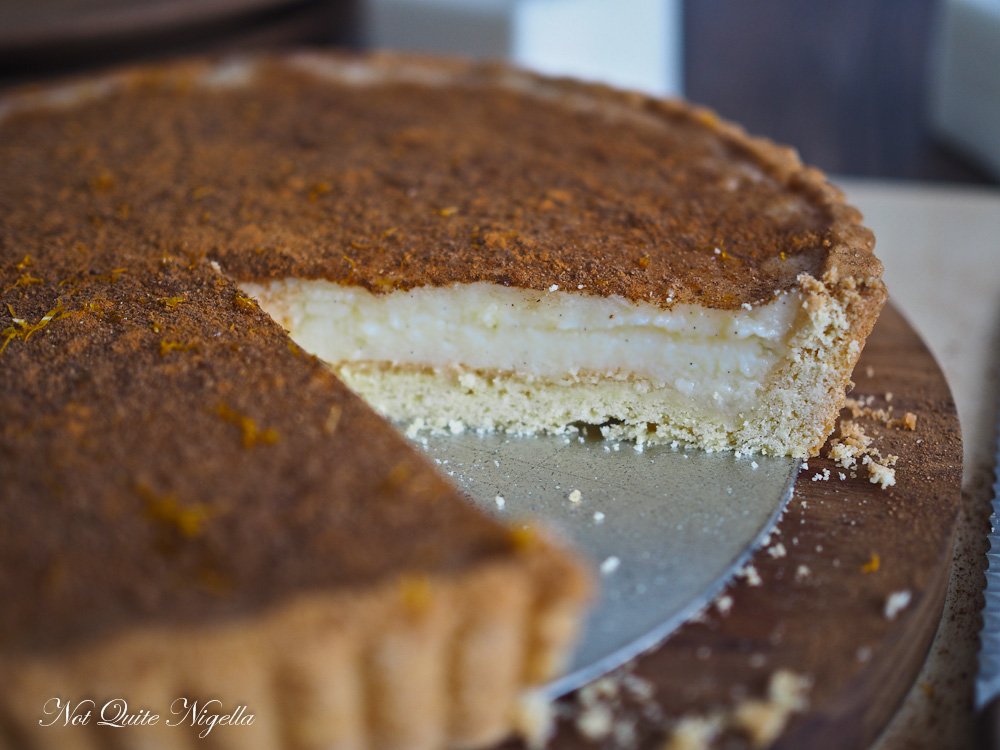 A few things tend to happen when people first try escape rooms. They either freeze (Miss America), freak out (Belinda) or love it (the rest of us). And you can't really tell how people will react. But Nina and Garth took to it straight away. There were four rooms including one with a giant hamster wheel that we had to go through and we moved the wall of another room. We managed to get out with 10 minutes to spare. Truth be told it wasn't that hard but they loved it and want to do another.

To thank Nina for her recipe, I ended up giving her one of the melkterts that I made. I made a few because I was experimenting with the recipe and there are only so many tarts that one can eat. Also I needed to get it out of the house stat because it was one of those things that I would compulsively eat. Don't say that you weren't warned! ;) And as for the word lekker, it means good or tasty!

So tell me Dear Reader, have you ever tried a milk tart? Did you know the word lekker? And what catches your eye at the supermarket bakery or old skool bakery? 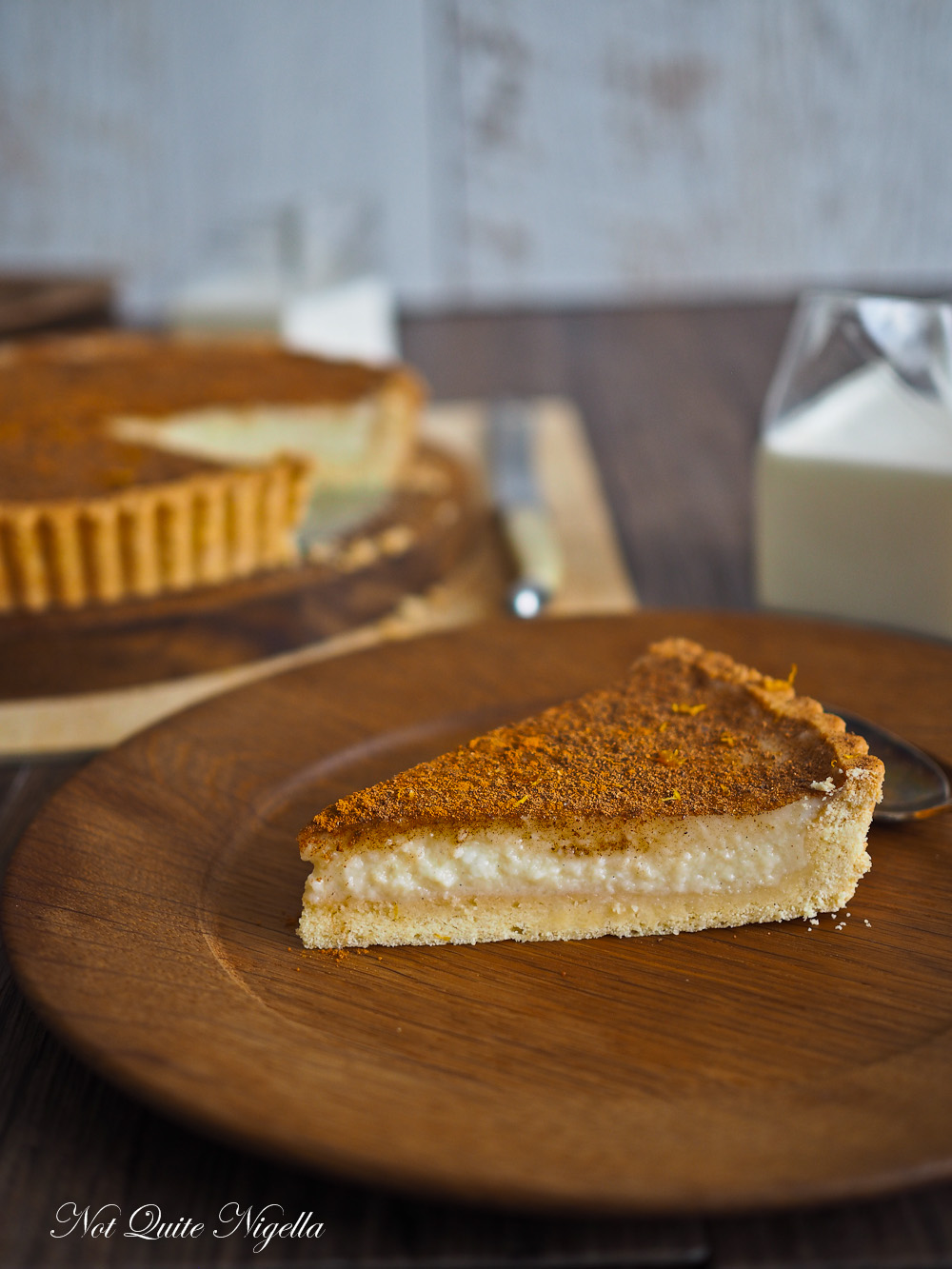 Step 1 - Measure the flour, baking powder and salt in a jug and whisk until combined. Cream butter and sugar together with a beater attachment until pale and fluffy (about 3 minutes). Add the egg and beat until thoroughly incorporated. By hand add in the flour mixture and mix until just combined. 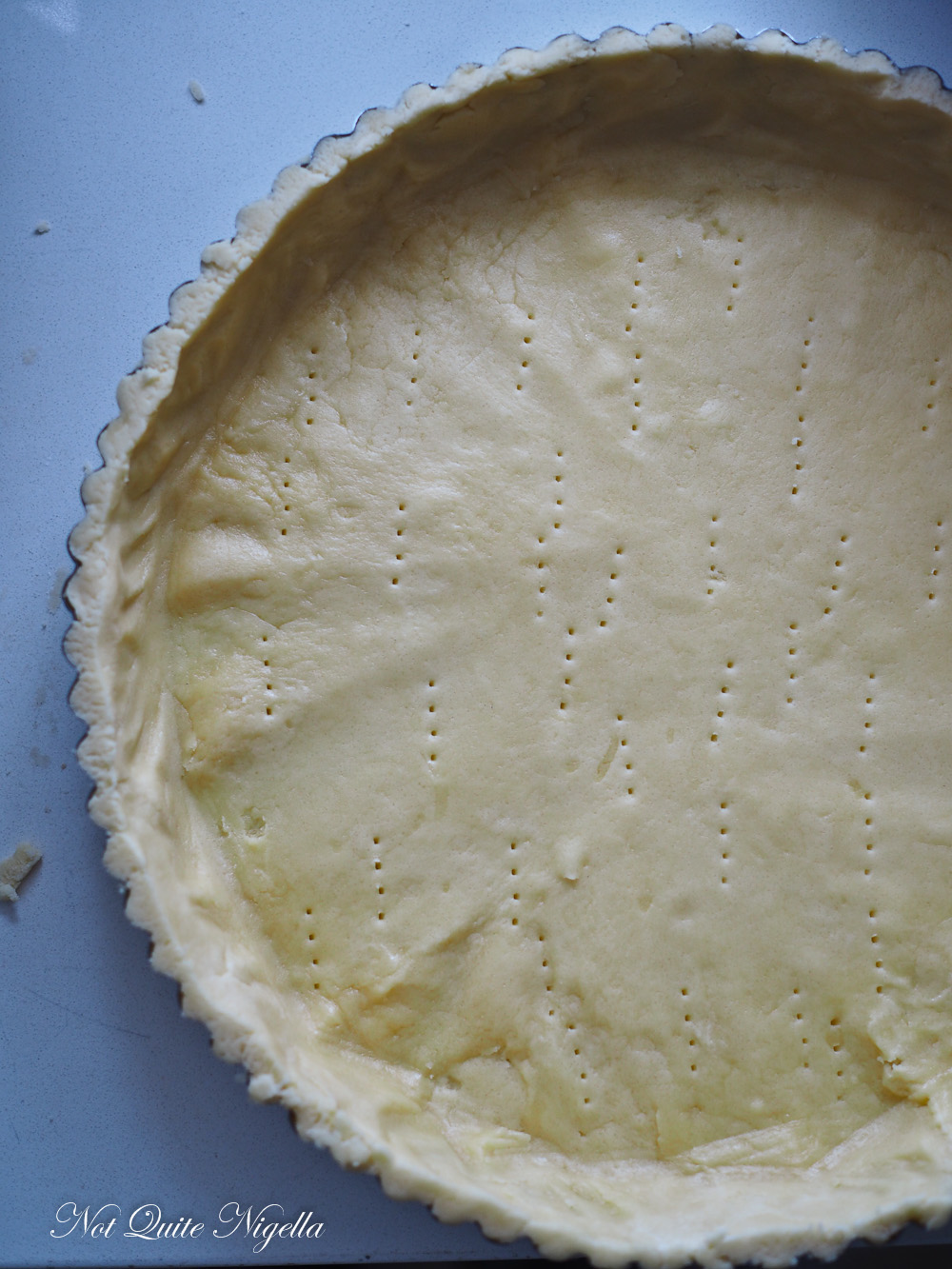 Step 2 - Press the dough into a 25cm/10inch tart plate with a removable base. Make sure that it isn't too thick and dock with a fork. Place in the freezer for 30 minutes. Meanwhile preheat oven to 200C/400F and when ready bake the base for 15 minutes or until golden and cooked through. You don't need to weight this down if you freeze the pastry. The pastry can be baked 1-2 days in advance and covered well and placed in an airtight container or box. 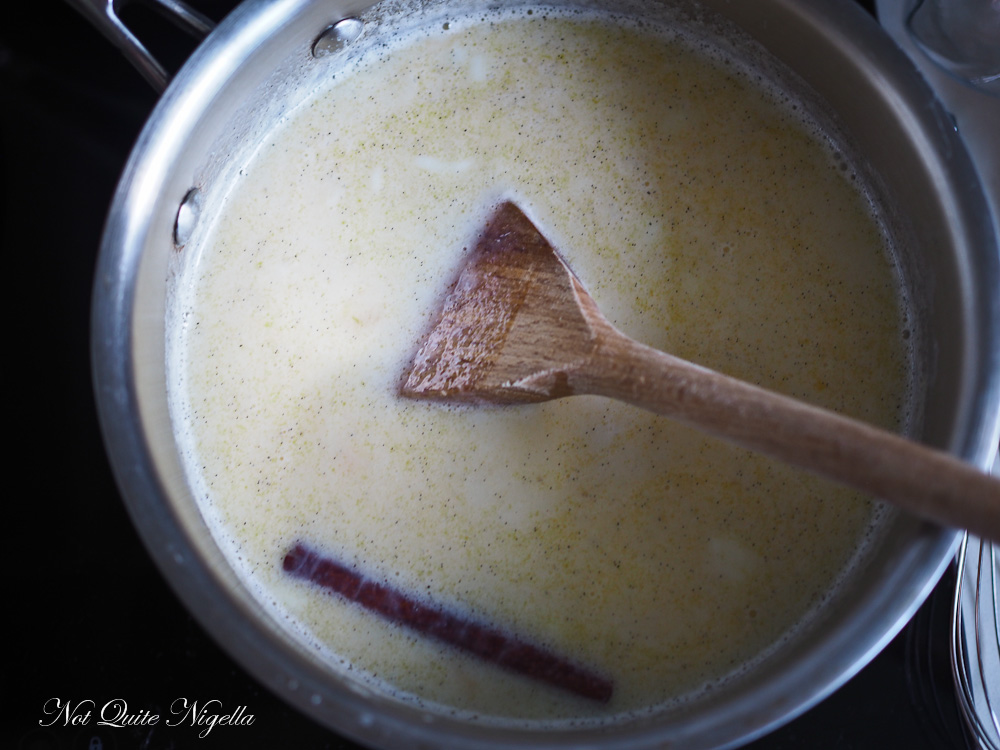 Step 3 - Scald 500ml or 2 cups of the milk with the butter and cinnamon stick. In a separate jug whisk the remaining 125ml or 1/2 cup of milk with the sugar, flour, egg yolks, egg whites and vanilla. Slowly pour this into the scalded milk mix and heat on low and make a thick custard. Strain the custard to remove any strands of egg yolk and white and the cinnamon stick. 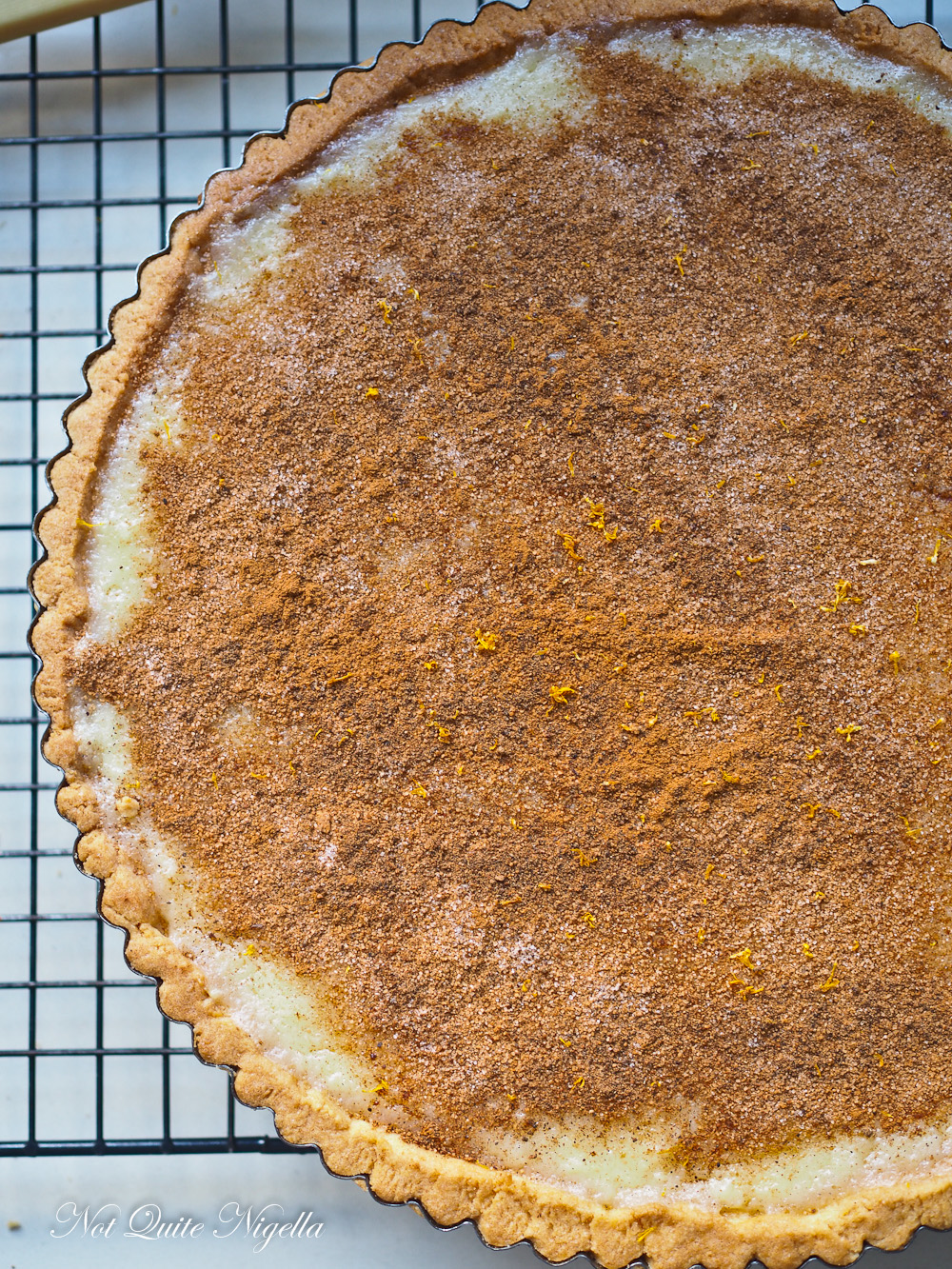 Step 4 - Preheat oven to 160C/320F. Pour the custard into the pastry tin and bake for 30-35 minutes until wobbly and not runny. Allow to cool completely and then refrigerate. Before serving mix the sugar, cinnamon and nutmeg and sprinkle over the top and then add the finely grated lemon zest.