Looking for a restaurant in the Sydney CBD that offers French classics, good service and a pretty as a picture fitout? Then Bistro Guillaume it is. The mid range bistro is one of three in Australia by chef Guillaume Brahimi. There are Perth and Melbourne branches as well as the newest one in Sydney. 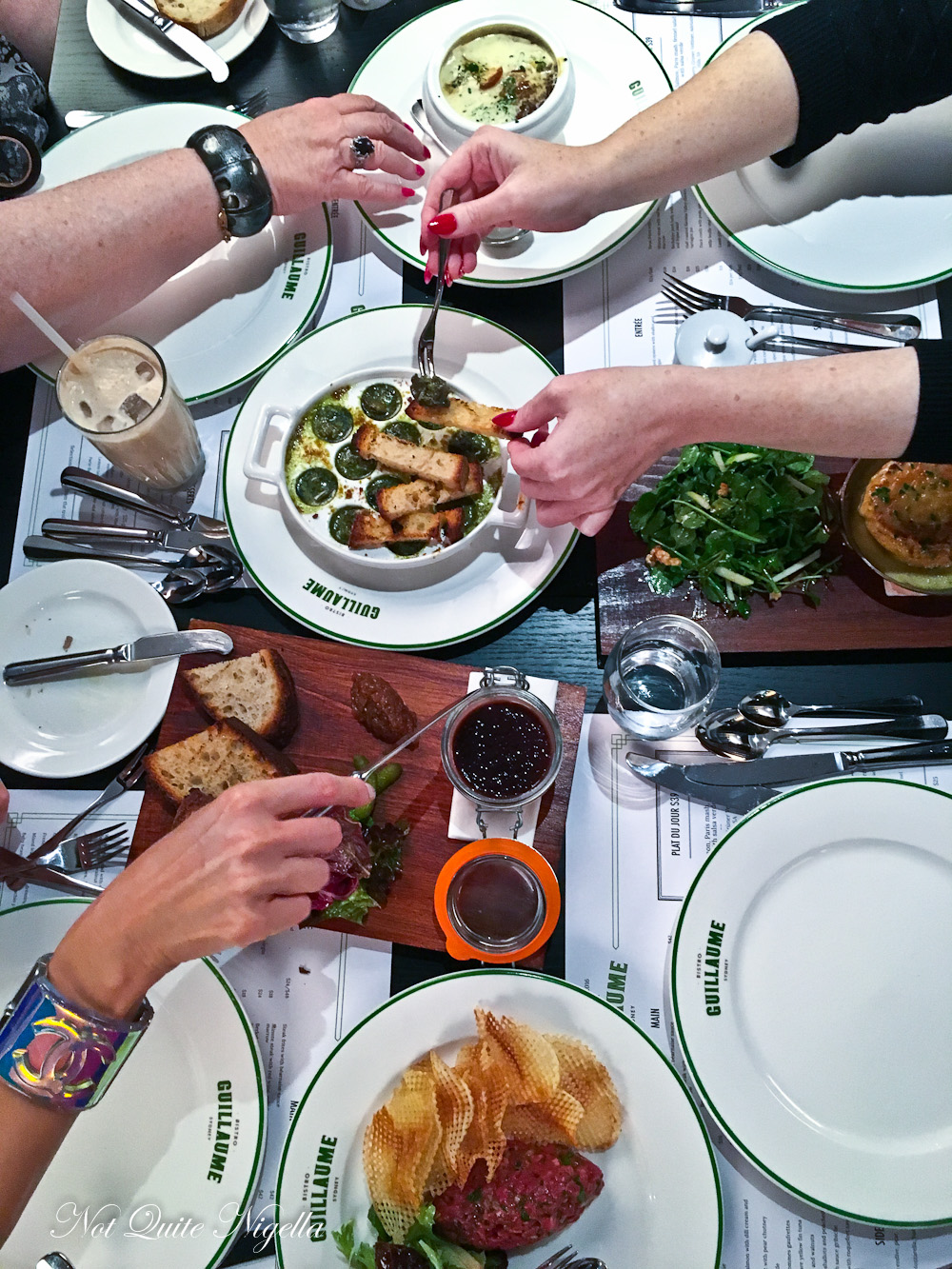 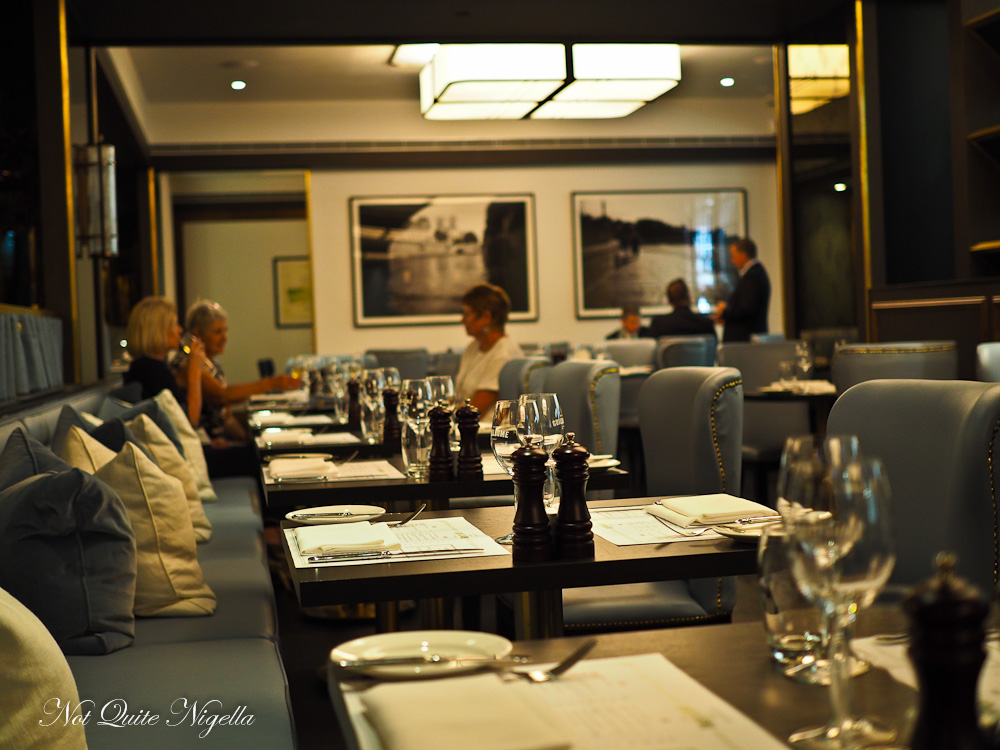 Bistro Guillaume is located right next to Wynyard station in an office tower. I had visited the Bistro Guillaume in Melbourne and truth be told I didn't overly love it. So I was curious to see what it was like here. The Guillaume from the name is chef Guillaume Brahimi. At the time of dining he was about to close his more upmarket restaurant Guillaume in Paddington. Given its location it also serves breakfasts and has a takeaway coffee and sweets area facing the office building lobby. It's more of a lunch venue than a dinner one as it closes early at 8pm. 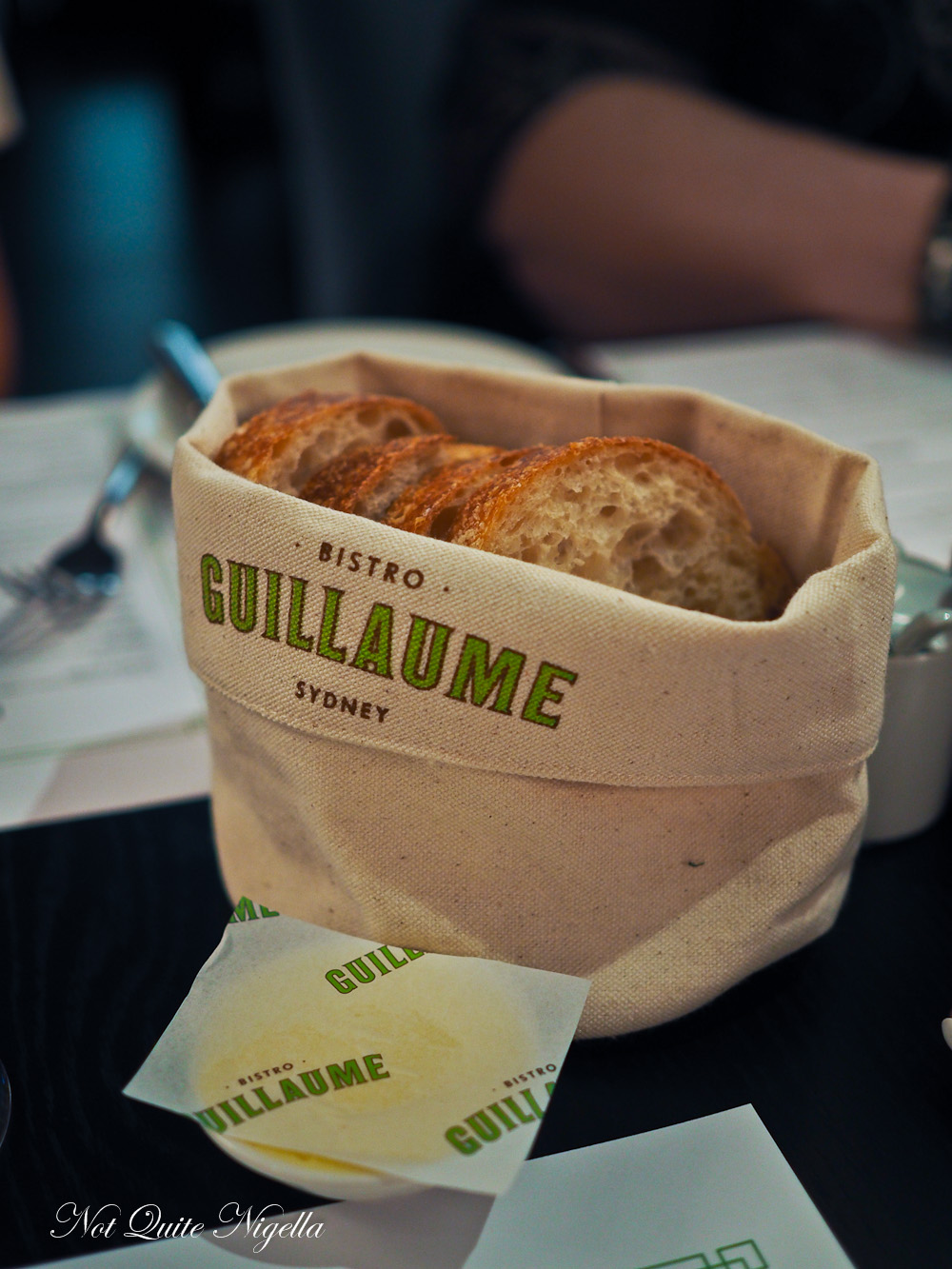 The room itself is lovely, in tones of dove grey with banquette seating. Bread and butter is brought to the table and the butter is excellent with a slight tang like a cultured butter and the bread is fresh and unlimited. "Unless Ryan Gosling blesses it, I'm making it my New Year's resolution not to pay for bread," quips Belinda. We all have eyes bigger than our stomachs and a few of the entrees can be upsized to either a main size or a larger size to feed 2-3 people or 4-6. 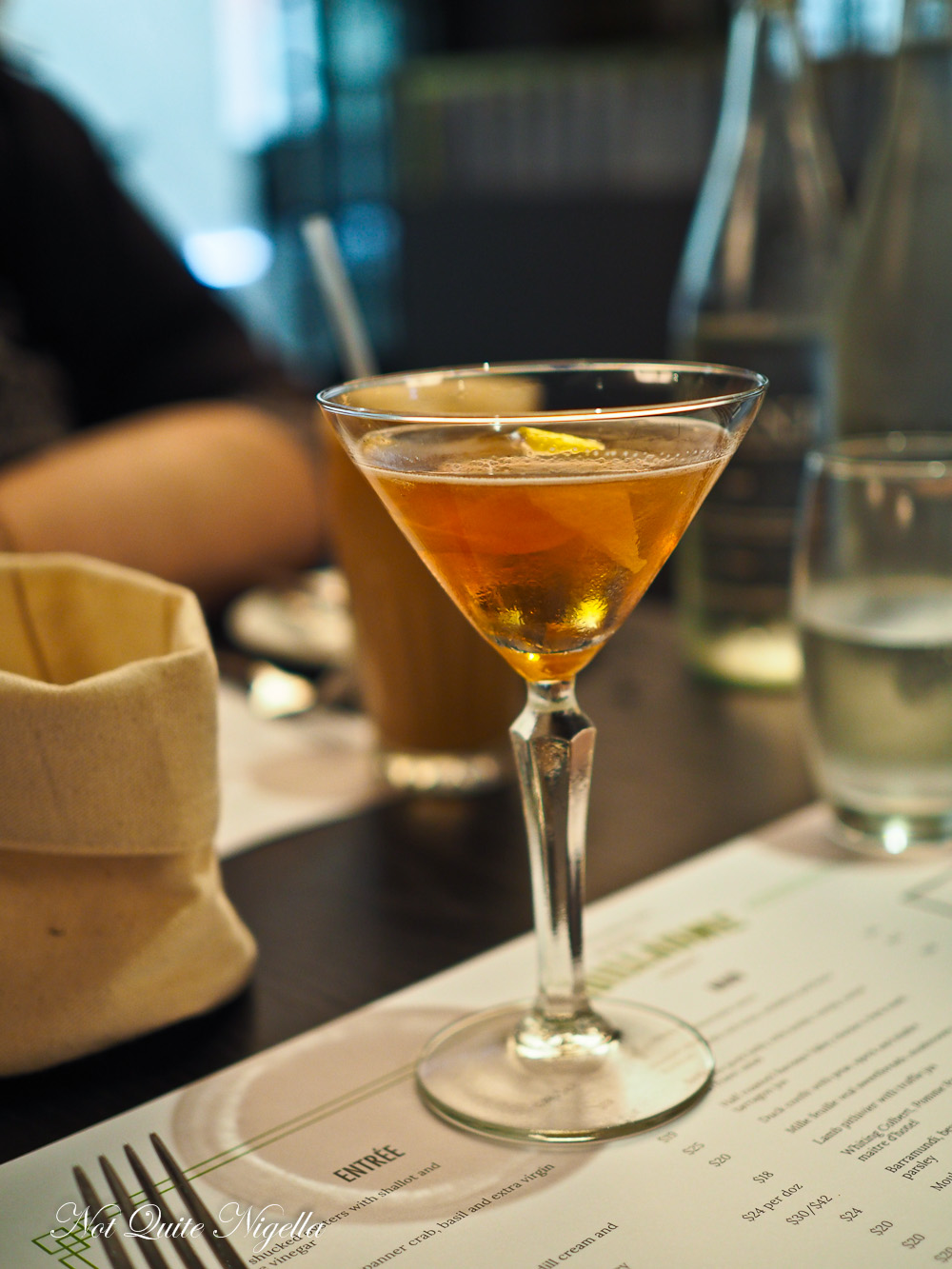 Alyson and I aren't drinking-I've got a workout session with Nina in a few hours and Alyson is on the ill advised "Dry December" idea. Belinda orders a Martinez martini while Cheryl tries to get them to make a strawberry blonde cocktail which nobody seems to know how to make anymore. It essentially tastes like an ice cream mixed with a soft drink (a spider). 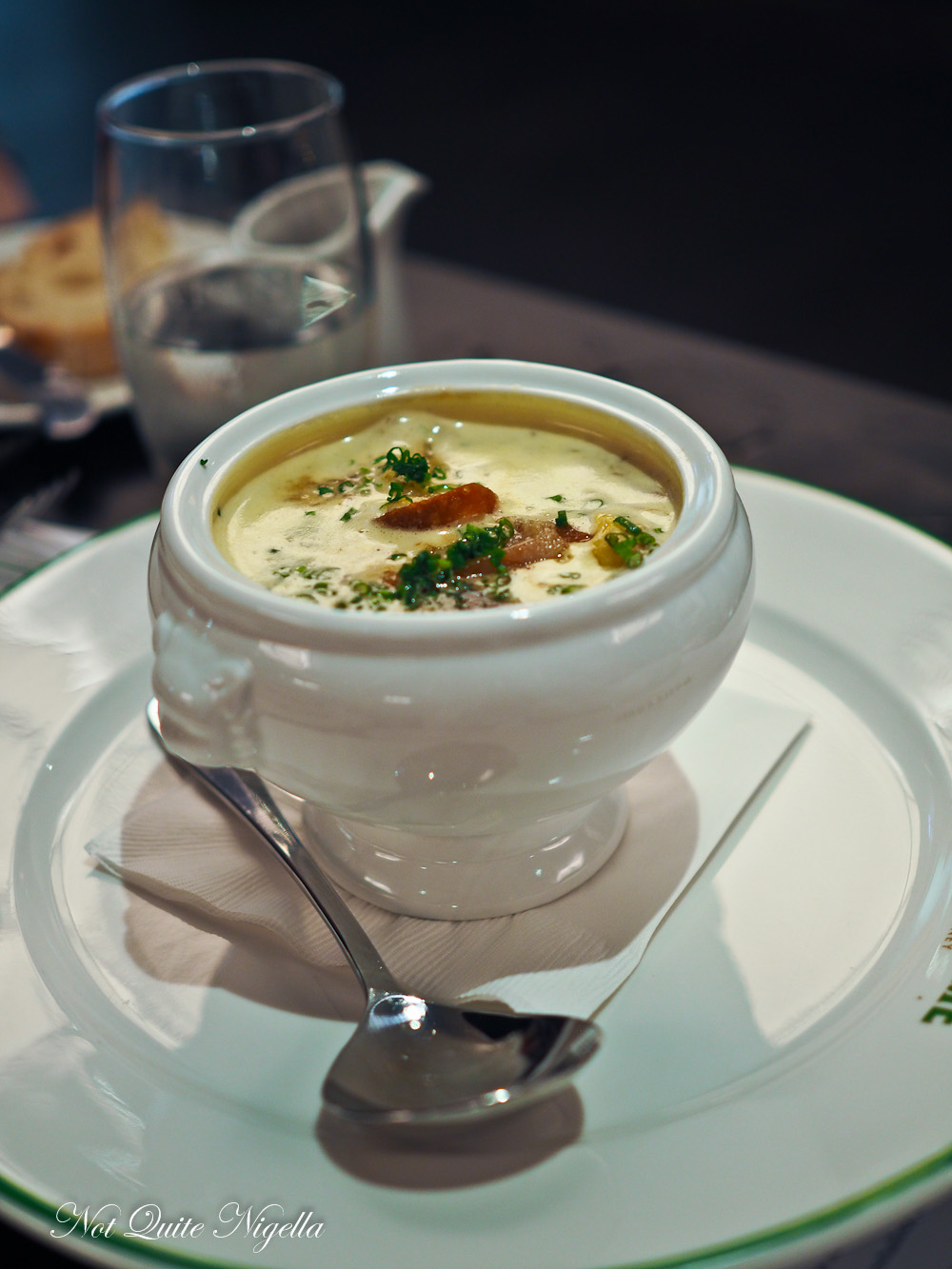 The entrees arrive and yes there are five entrees and only four of us but we liked the sound of the entrees the best. The onion soup has plenty of thinly sliced, soft as cotton onions and it's quite on the sweet side. After rather begrudgingly giving us a sample Cheryl cups the bowl to herself and sips the soup spoonful by spoonful blowing on the steam. "It's almost bottomless," she murmurs after eating it for 15 minutes. 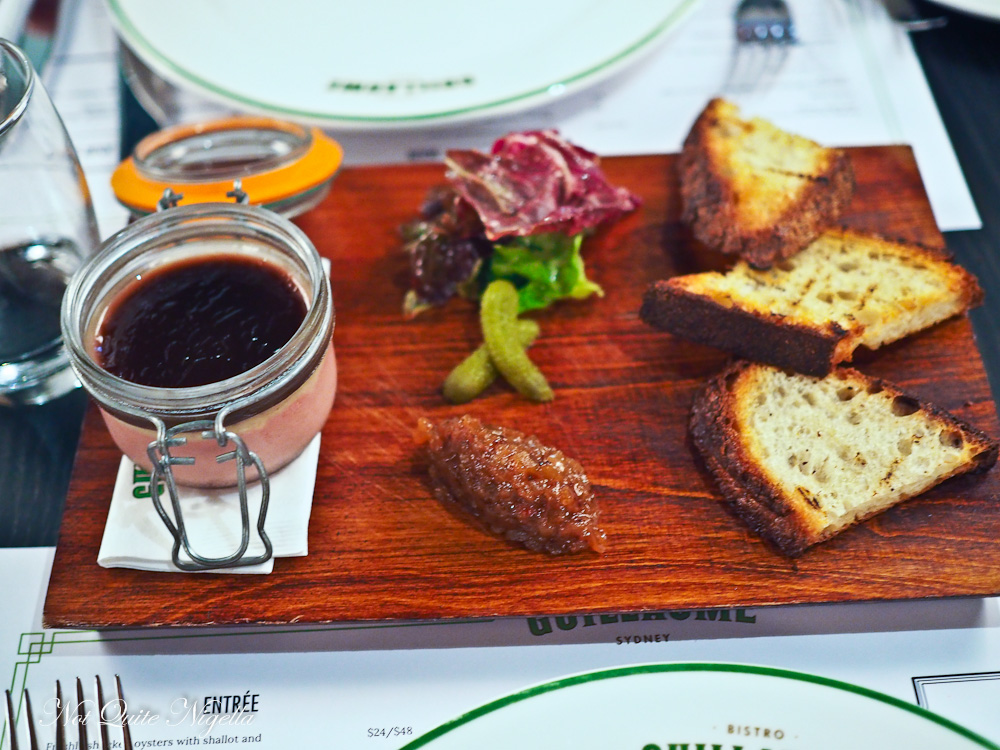 The parfait is smooth and creamy and is served with finely diced pear chutney. It would have been nice with a bit more pear chutney to balance the rich parfait and it comes with three slices of toast (although I suspect most people will need more given the proportions). 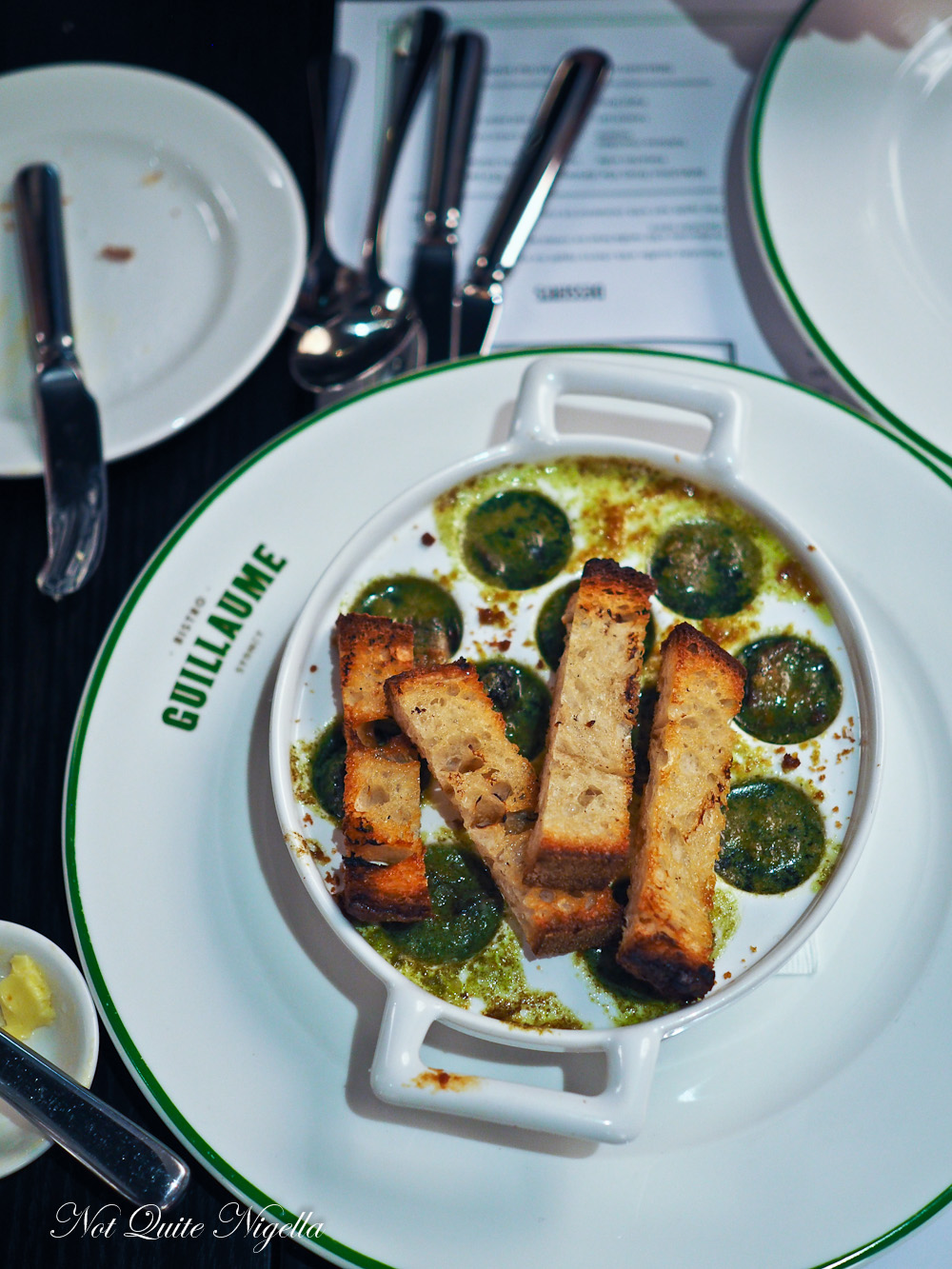 The escargot are served out of their shell in the traditional ceramic dishes and they are dunked in a garlic and parsley butter which is strong in parsley. They're not bad although I prefer the butter to be more garlicky than strong in parsley. 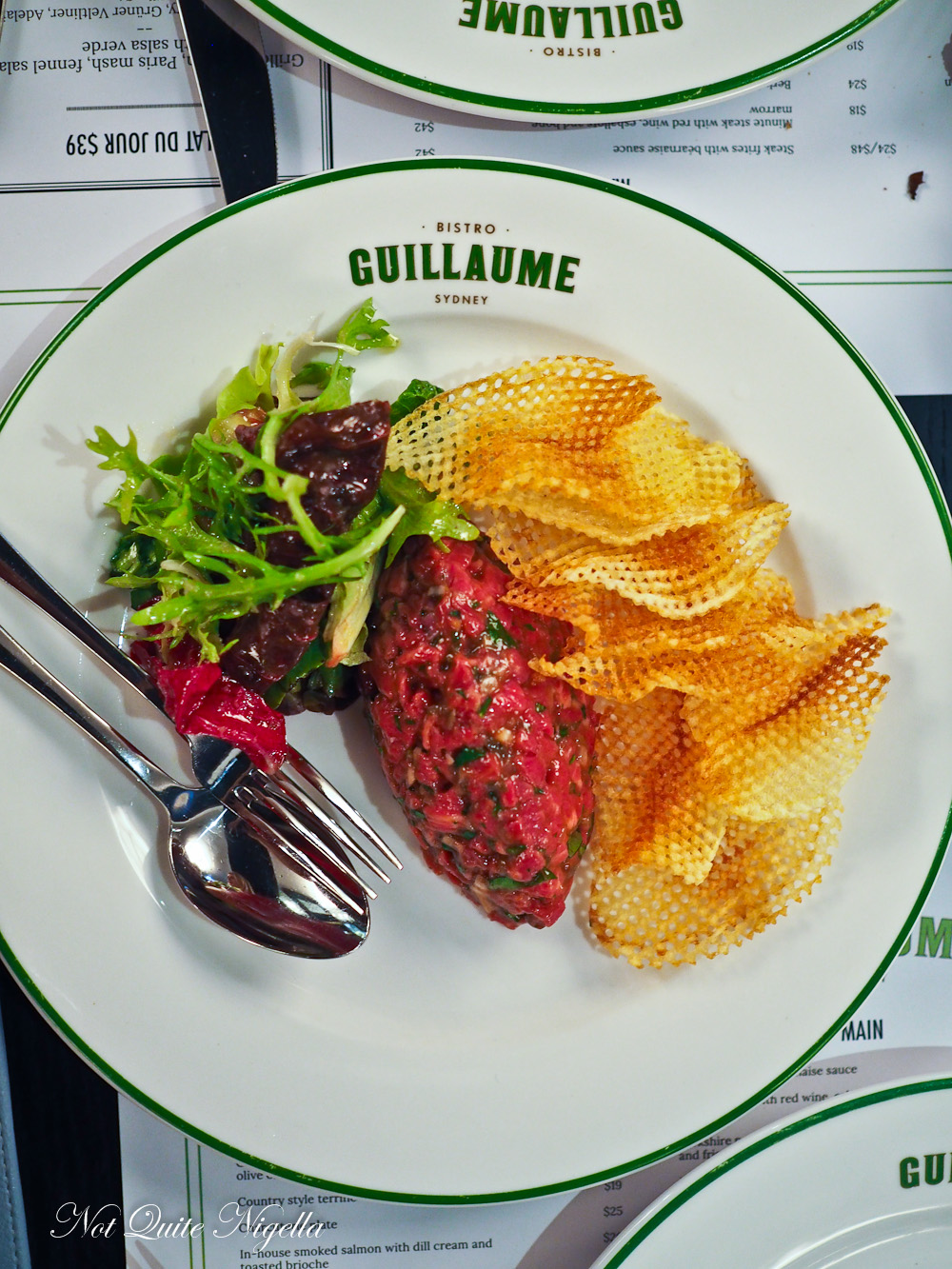 Hands down my favourite entree is the steak tartare. This is the larger main size and it is perfectly seasoned, with cubes of raw, fresh beef. It comes with a small salad and potato chips (although a few more would have been juuuust right). 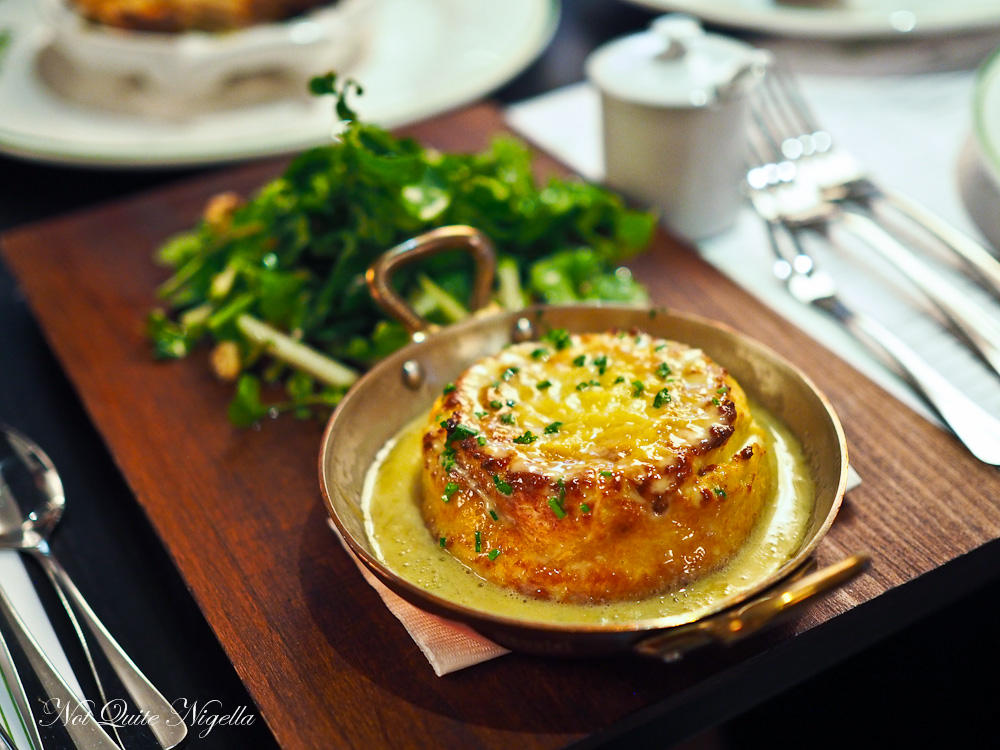 The twice baked cheese souffle comes in three sizes: for 1, 2-3 or 4-6 people. I have to admit I was curious to see how big a 4-6 person cheese souffle was but given how much we had ordered we downsize to a one person serve. This is a creamy number with the unmistakable flavour of Roquefort cheese. It's lovely and light in texture but bold in flavour. 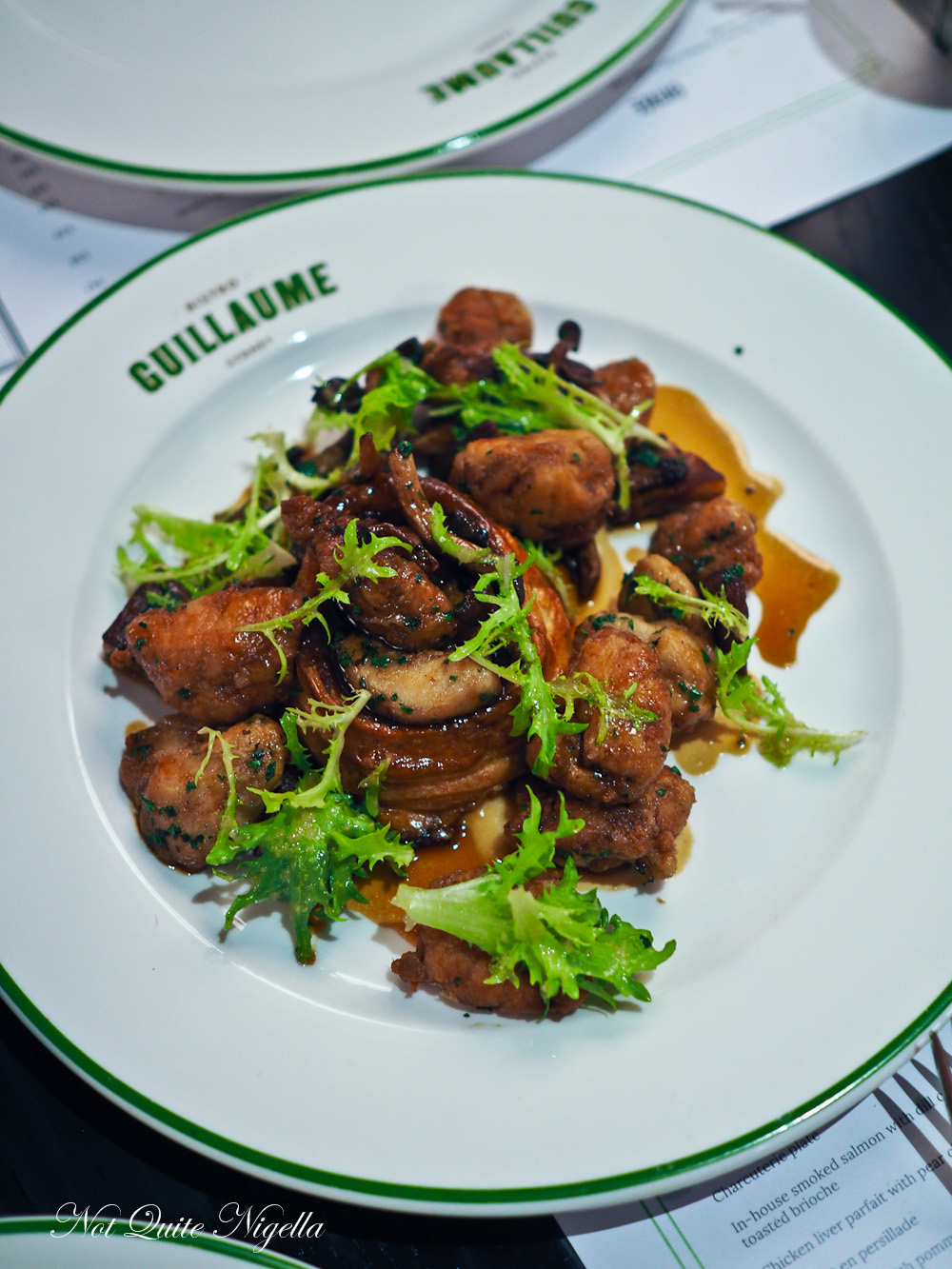 It's time for our mains. Belinda and I are the only ones that really went for the sweetbreads. I must say that I was a bit disappointed that it wasn't as a mille feuille as the menu said but rather a vol au vent. I was looking forward to seeing a savoury mille feuille so that I could try to make one myself! The mushrooms are divine and the veal sweetbreads are soft and mild and paired with a jus gras made from pan drippings combined with cream. 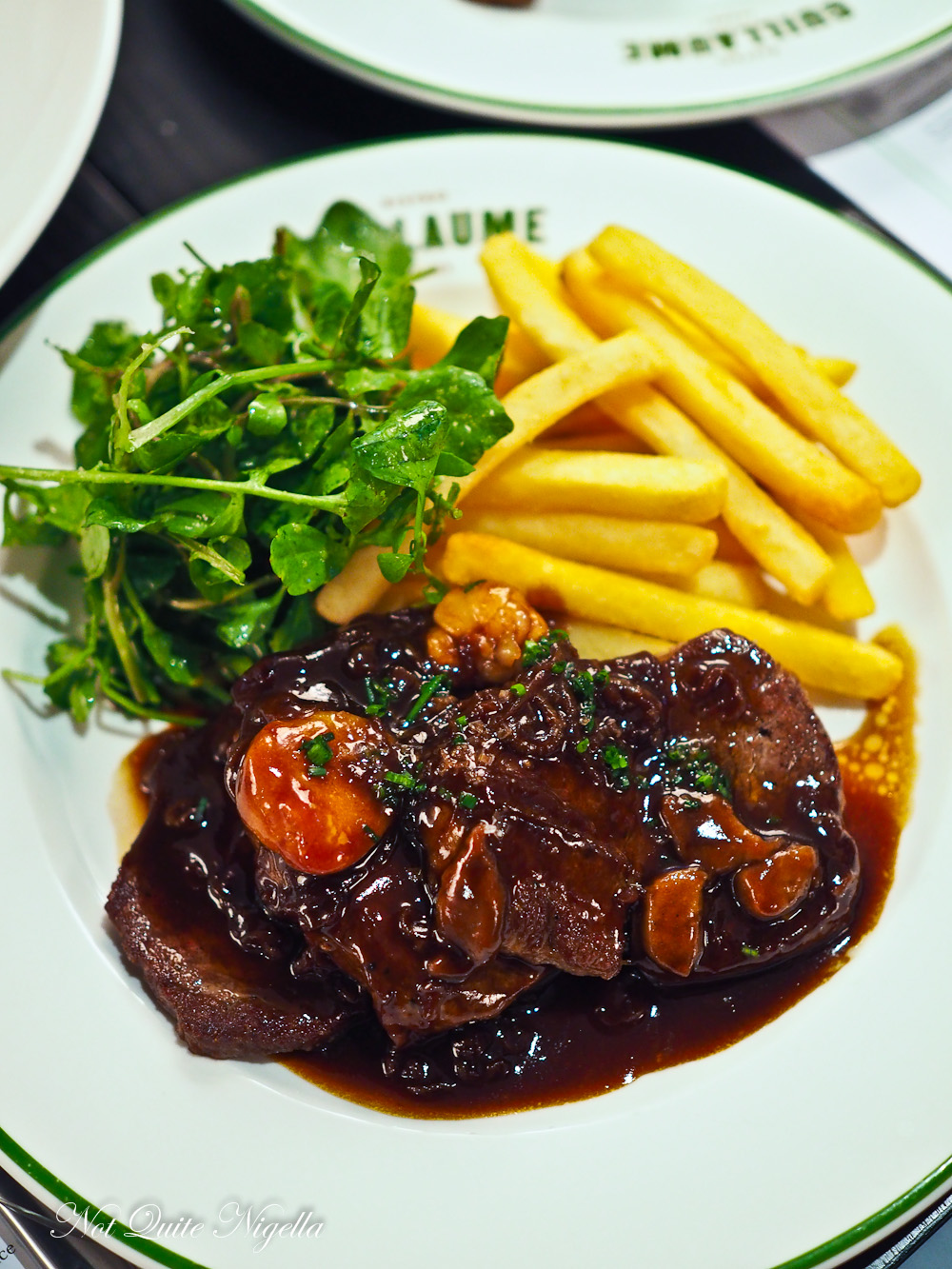 My portion of minute steak is alas quite sinewy and chewy and truthfully I prefer steaks without too much sauce or at least sauce that I can regulate by dipping because I love the flavour of a good steak. And maybe something odd is happening to me but I'm finding marrow to be a little too rich for me nowadays. Oh the horror!! 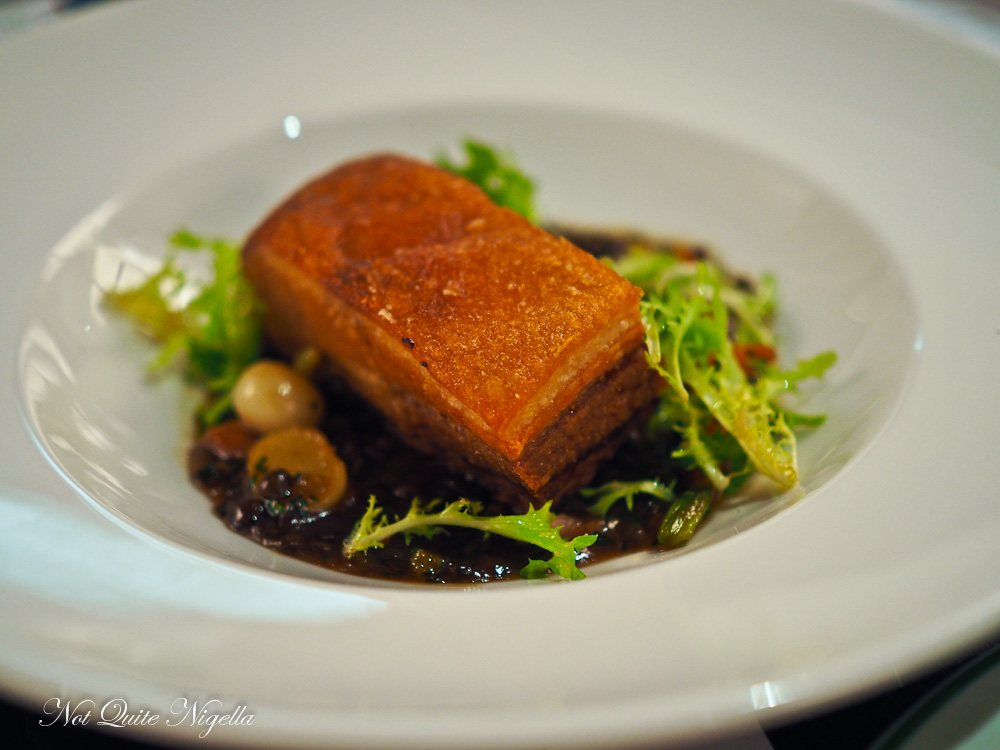 Out of the mains I liked the Berkshire pork belly the best. It is what it says it is and the pork is meltingly soft. But we all agree that the entrees appealed to us more than the mains. 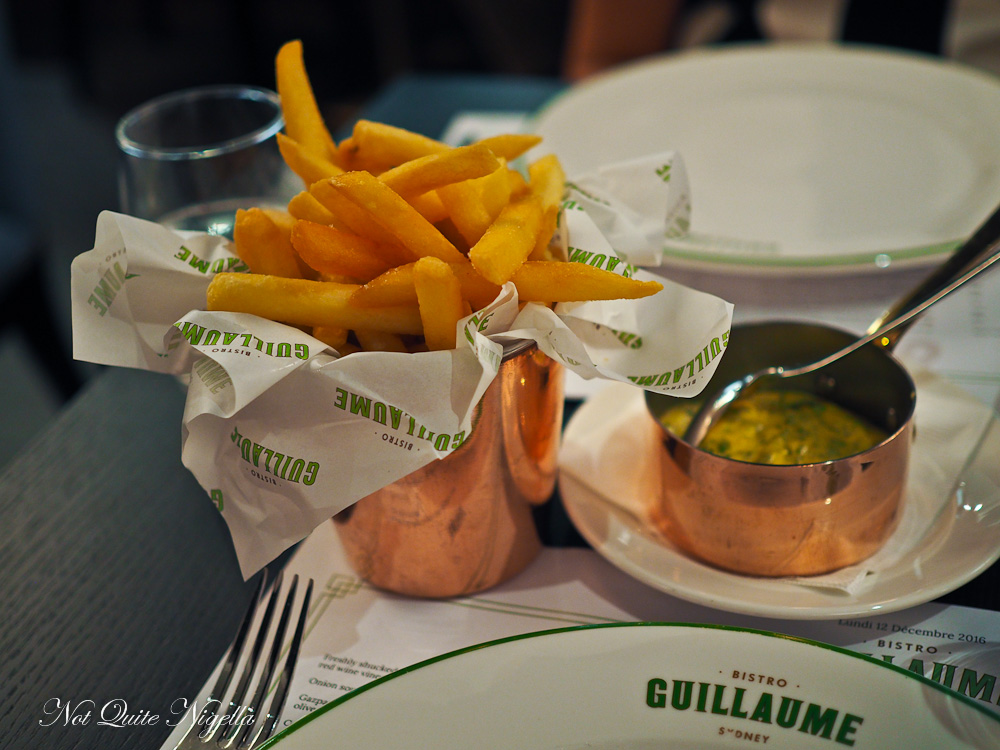 Oh did I mention the chips? They're gloriously golden and crunchy and very addictive. When Cheryl asks for some gravy to dip them into they offer a tangy bearnaise sauce. 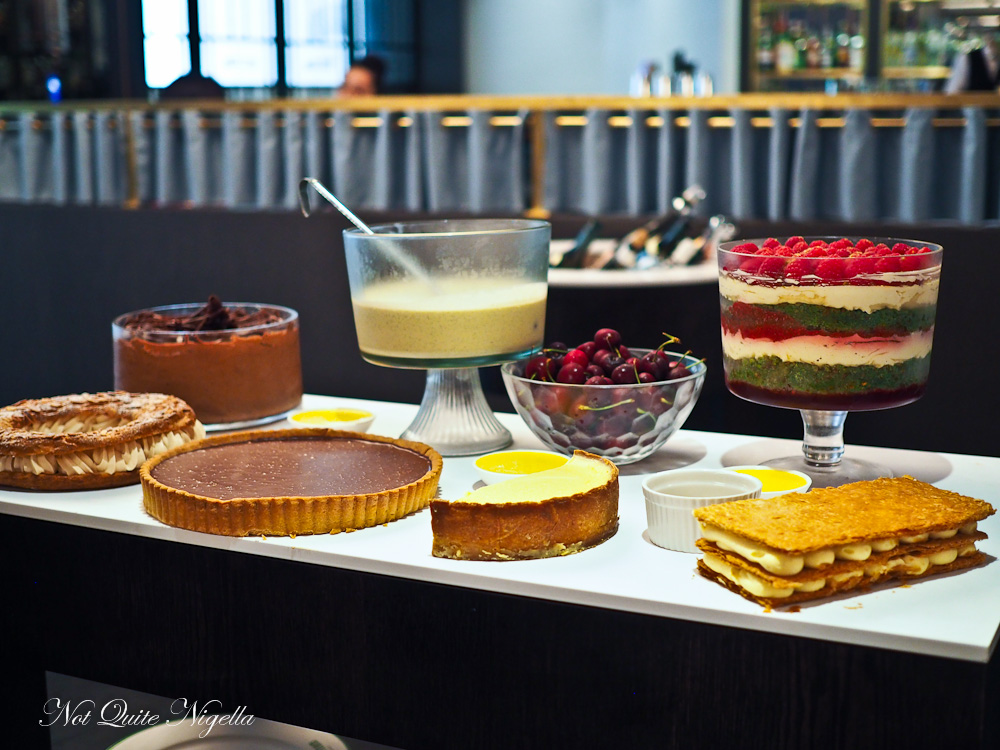 And then the dessert trolley swings past. And it's quite a sight. We were dining quite early so we were the first to choose from this in its full, uncut, unmolested glory. There are six desserts on the trolley and you can choose up to four of them for the price of $25. We choose the salted caramel chocolate tart, the pistachio and raspberry trifle (because Christmas), Paris brest and mille feuille with Madagascan vanilla cream. The ones we bypass are the lemon tart, Valrhona chocolate mousse and passionfruit creme brulee. 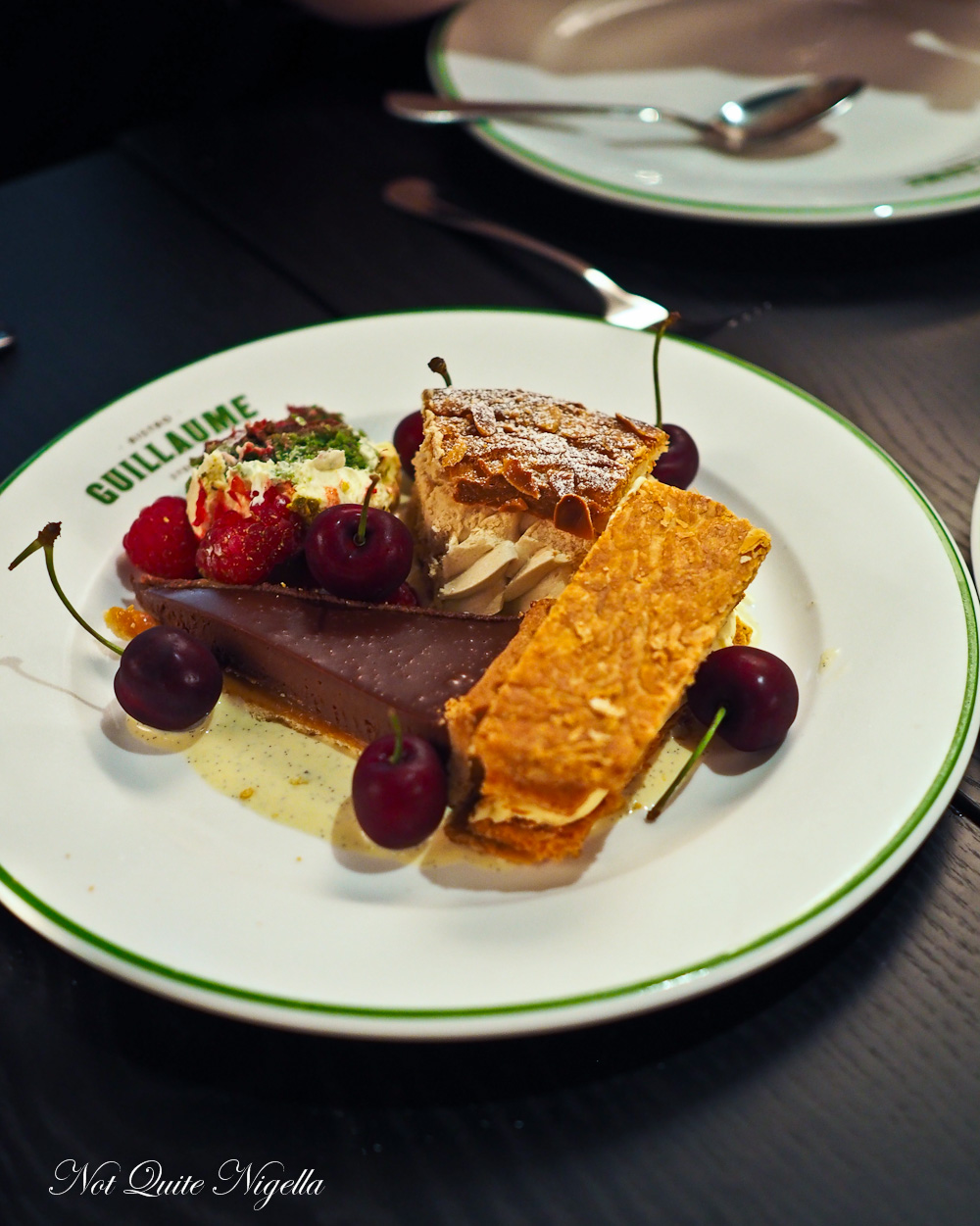 All four desserts are delicious and served on some creme anglaise with fresh Tasmanian cherries. I couldn't pick a favourite out of them but I did love the hazelnut praline cream in the Paris Brest and I was surprised at how much I liked the pistachio and raspberry trifle. 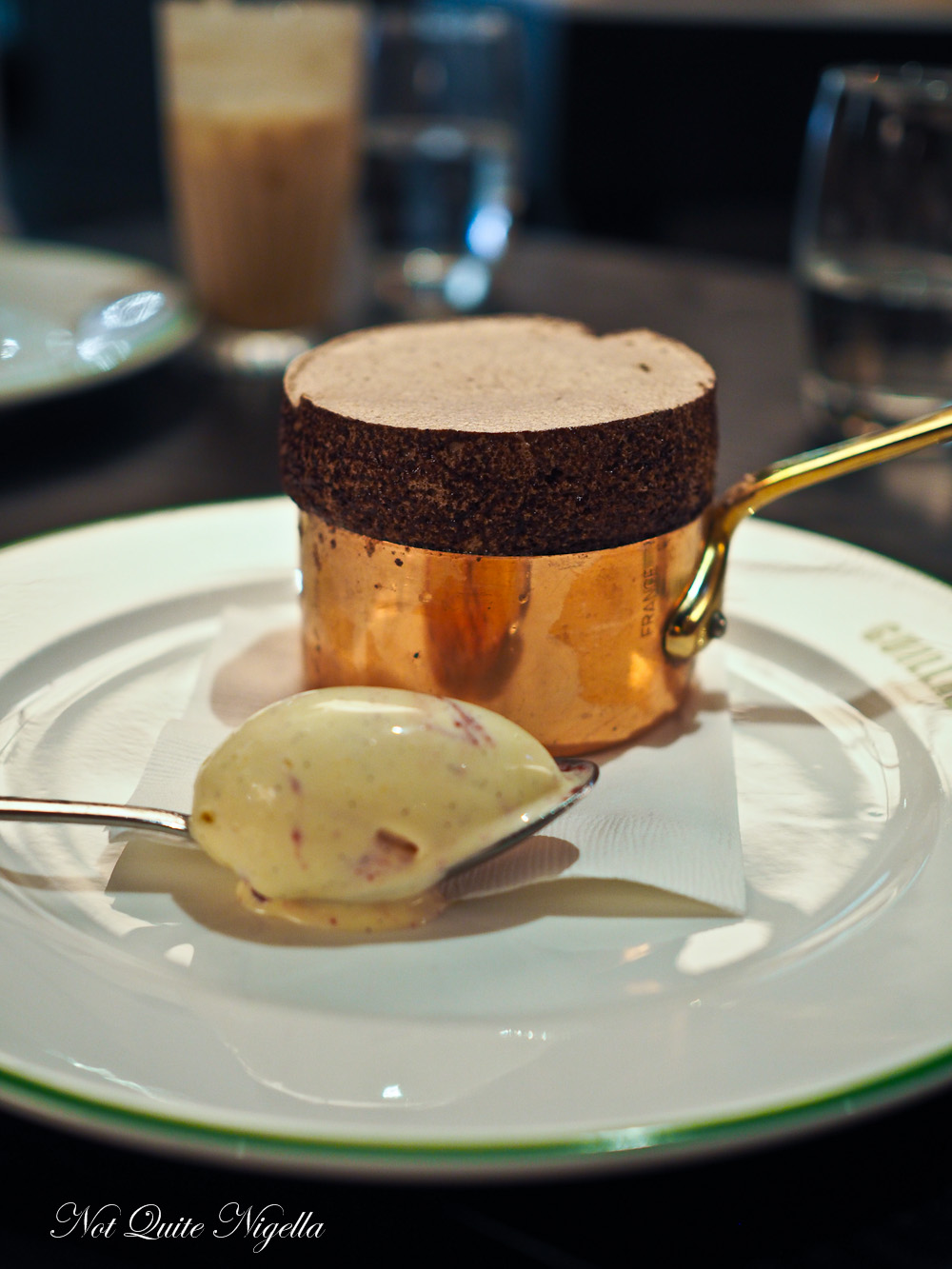 The reason why we ordered this was to try the cherry ripple ice cream that it said that it came with. The cherry flavour is very mild in this, it is more like a vanilla ice cream. Still the chocolate souffle is light and airy and perfectly made.

And our other New Year's resolution? To have more dessert trolleys in our lives!

So tell me Dear Reader, have you ever been able to choose from a dessert trolley? What would your choices have been? And how do you feel about paying for bread?