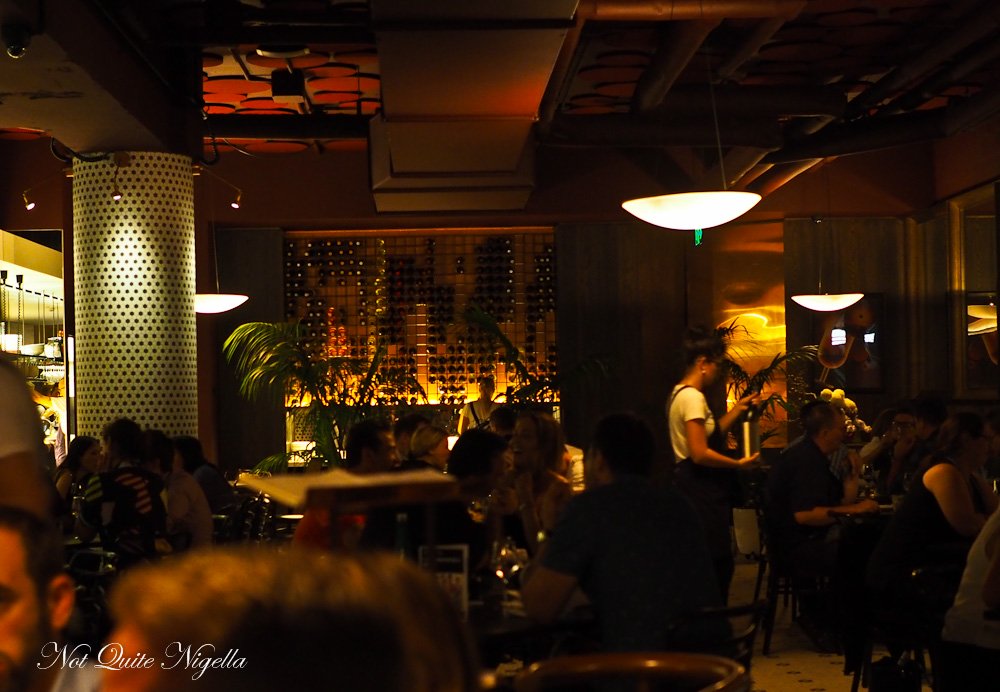 Open for just two weeks Bistro Rex has already proven a hit with locals. With a French inspired menu, a big wine list and a warm fit out, what exactly are locals feasting on?

"I'll get there early to nab a seat," says Alyson, who it must be said is always terribly punctual. As for me, we are the family who have scrambled to get everyone together. It's pouring with rain and I have Mochi in the back seat and Mr NQN is dropping me off. And even then I'm 10 minutes late. And Bistro Rex does not taking bookings for tables under six people.

It's 6:40pm by the time I arrive at Bistro Rex and it is very busy. There's a line of people hoping to be seated and apparently it has been like this every day since it opened two weeks ago. Everything gleams in the restaurant and it has a warm fit out with big comfortable looking booths and plenty of copper.

The team behind it are numerous-nine people including chef Jo Ward of Vincent and many from Sydney's top restaurants. I join Alyson, Deborah and Cindy who are already seated. For a change there are no cocktails or wine ordered which is new but having had a week drinking in regional Victoria I'm giving myself a break too. 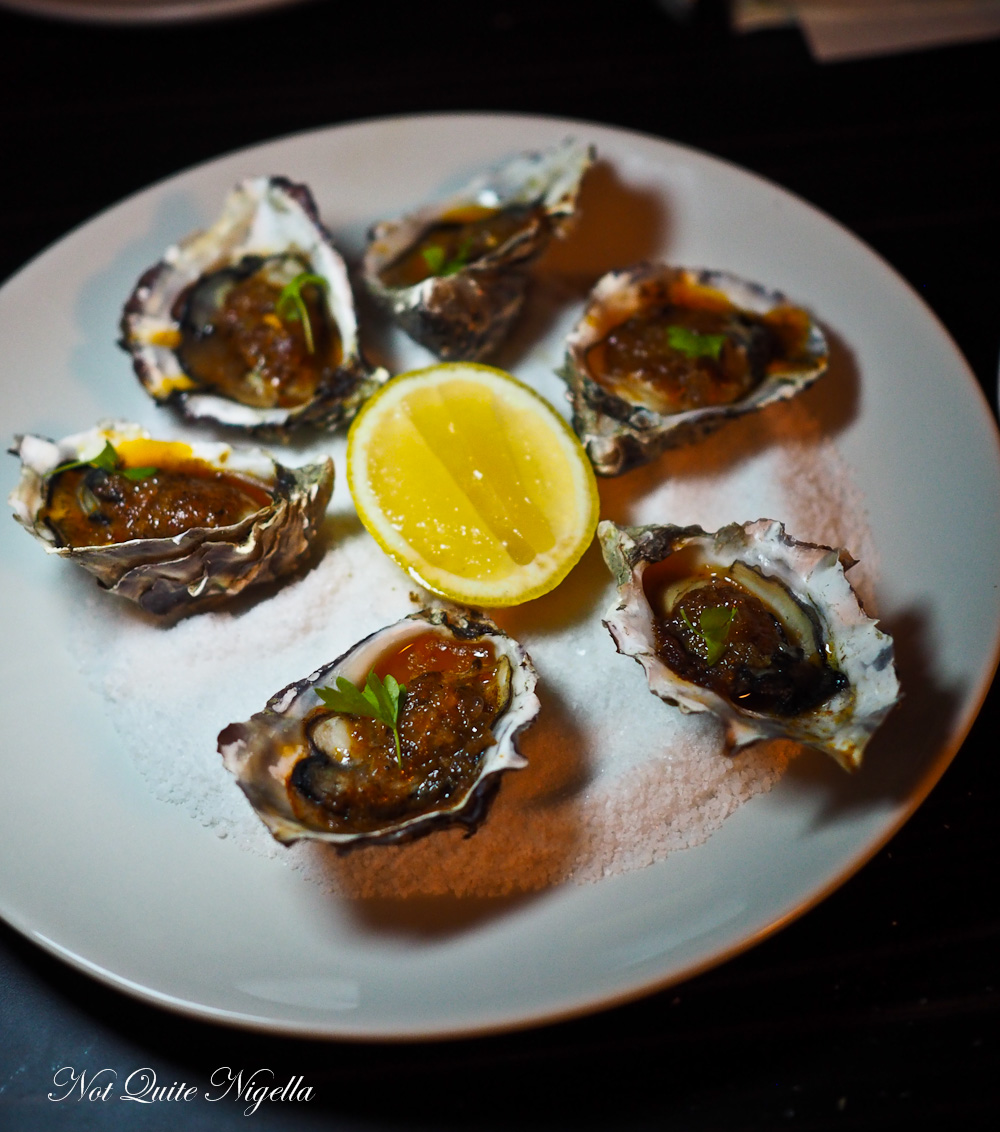 We're too busy talking to actually give the menu a proper look. So the friendly waitress suggests the oyster special written on the mirrors (although mostly illegible from our angle). As fans of a Bloody Mary we order these not quite realising that they are cooked oysters. And despite my dislike of cooked oysters they're actually really good with celery salt and tomato juice. 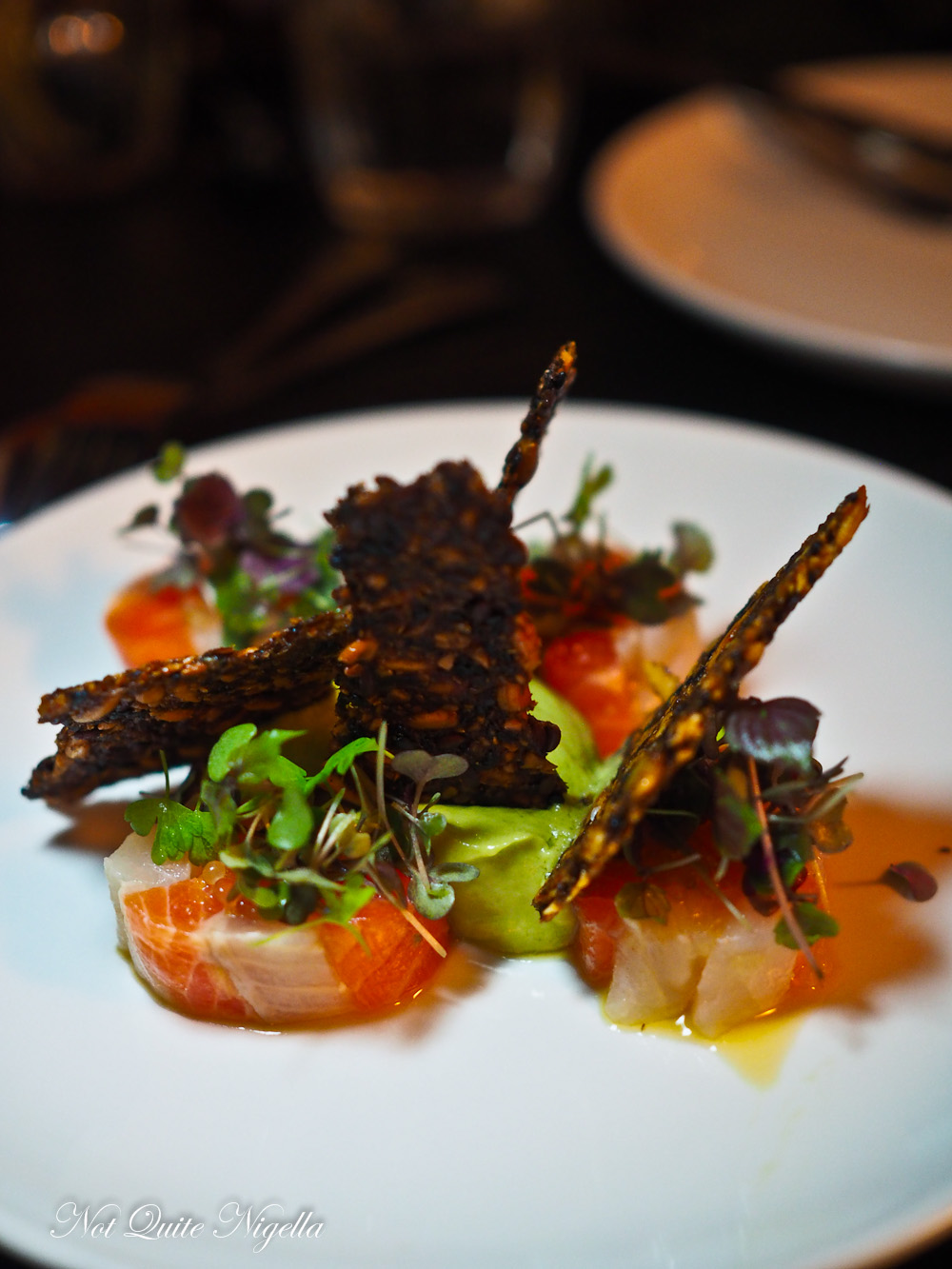 This is a beautiful dish with rounds of kingfish and ocean trout ceviche tied together with creamy avocado, finger lime pearls and a crunchy seed cracker. It's delicate and light but the avocado balances the tangy ceviche well. 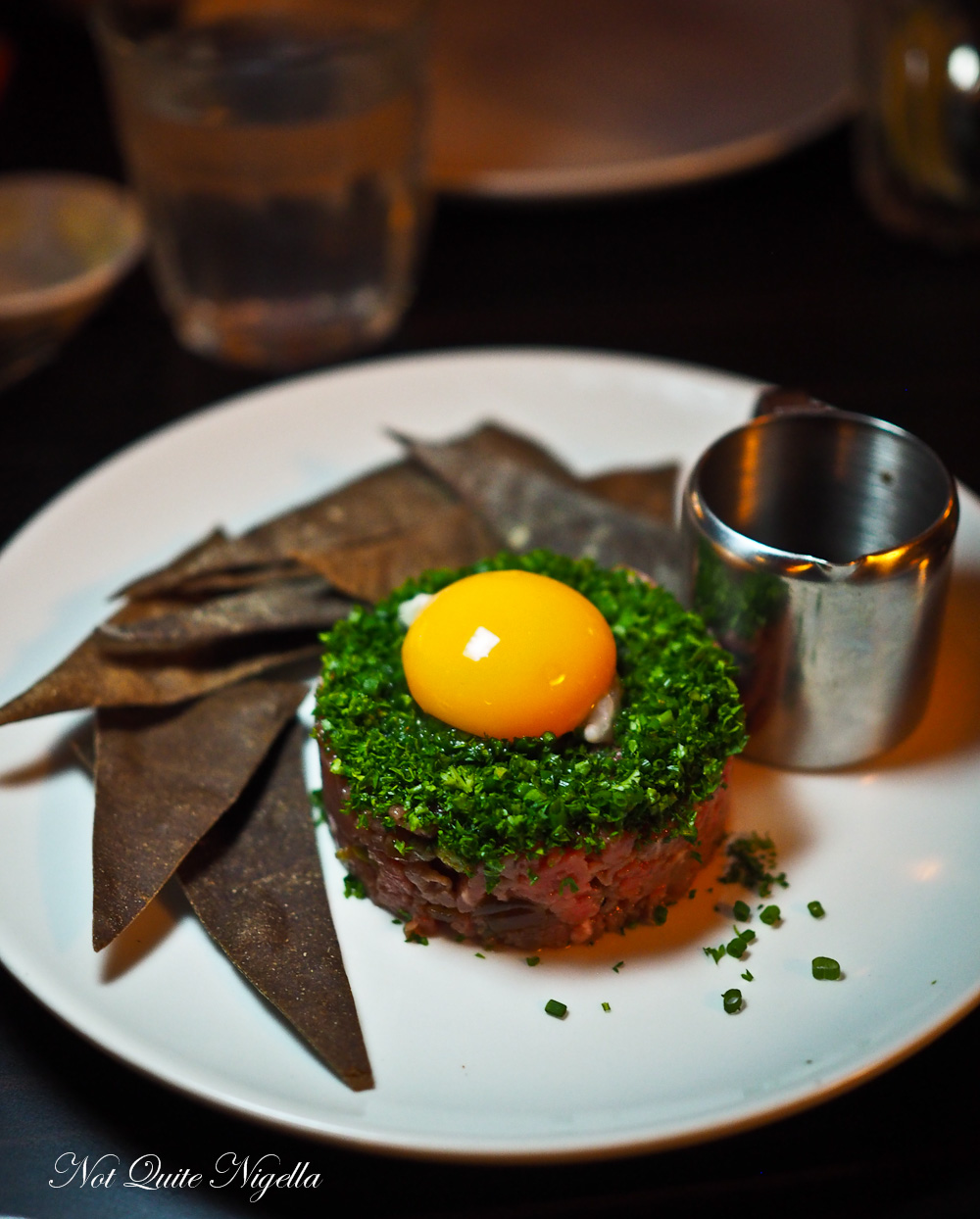 Alyson's favourite dish is always beef tartar. Here is comes with a raw egg yolk, covered in chives and with a tiny pot of Worcestershire sauce. "Would you like Tabasco?" they ask and we nod yes. Deborah is generous with her Tabasco application. It is served with dark malt crackers, the beef creamy and well seasoned with a nice kick of chilli. 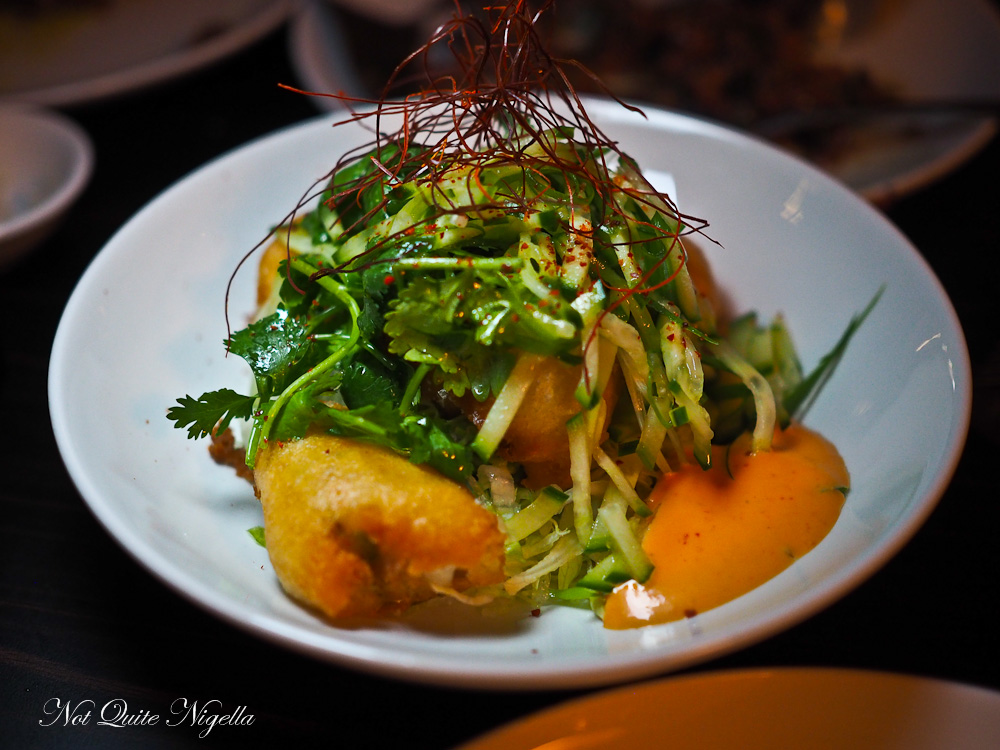 Usually I think of sweet donuts when I think of beignets. These are savoury feather-light fritters filled with prawn mousse served in four pieces with shredded cucumber, iceberg and fermented chilli aioli. Dividing this among four means you get a very tasty, light mouthful. The fermented chilli aioli gives the fritters a nice punch at the end too. 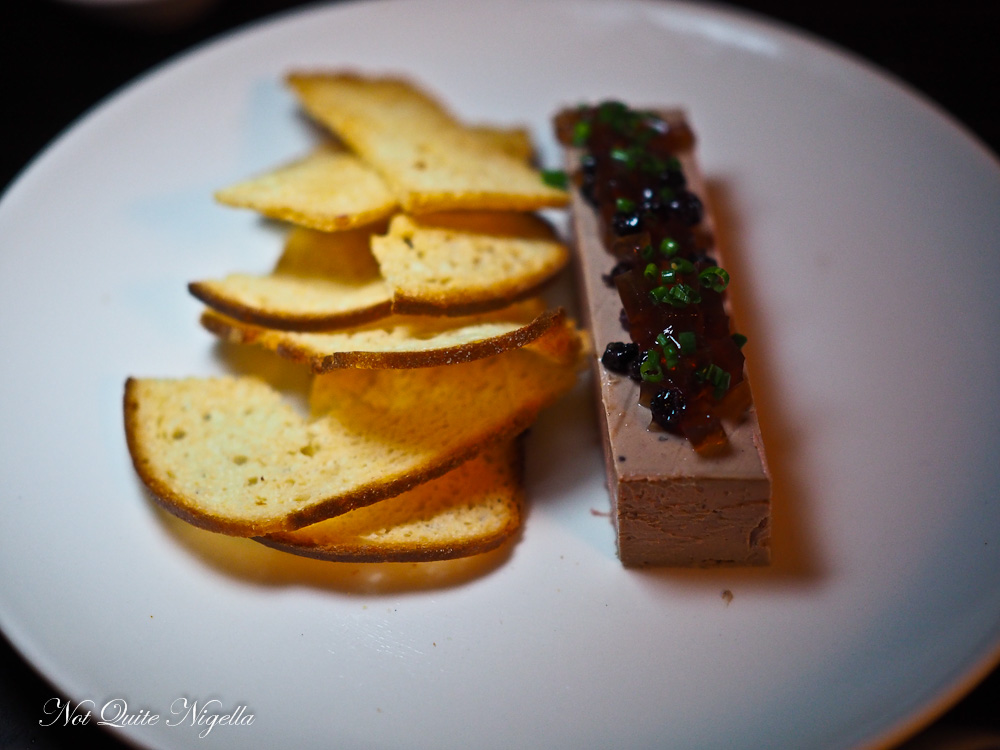 Our last entree is the smooth chicken liver parfait served with thin crisps with cubes of sweet and sour jelly and currants. It's good especially when you get some of the cubes of jelly on your toast. I actually prefer this on the bread generously provided with whipped butter. 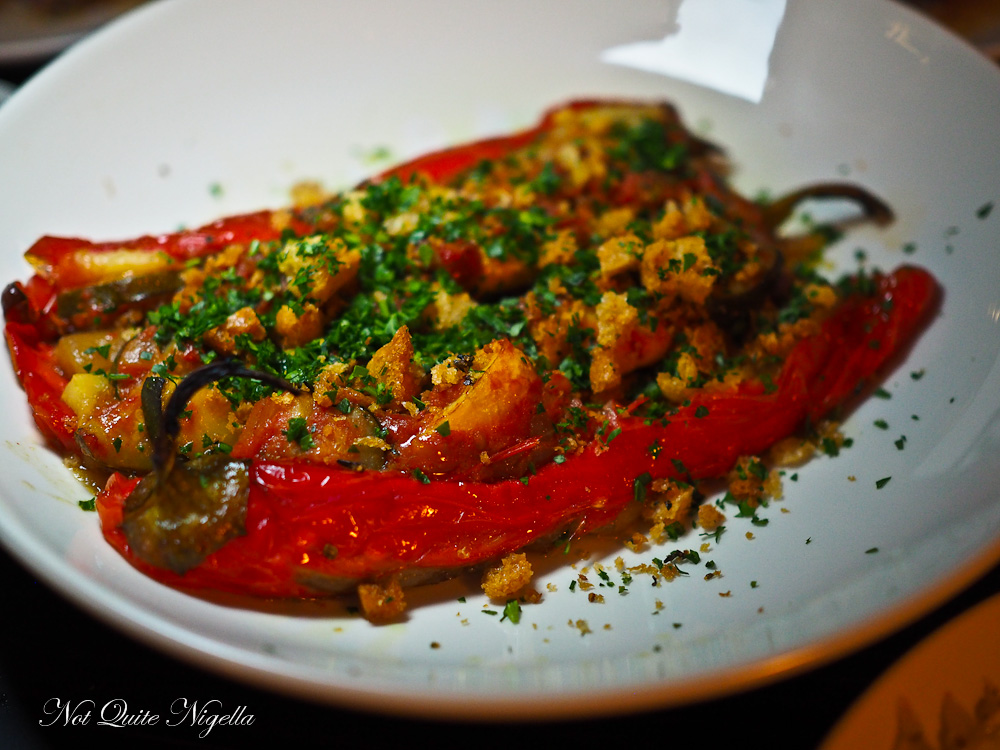 We decide to share two mains, one vegetarian for the vegetables. I think we were all expecting more eggplant in this whereas it's more red pepper. All of us reach for the salt for this as there is something perhaps missing in this dish. 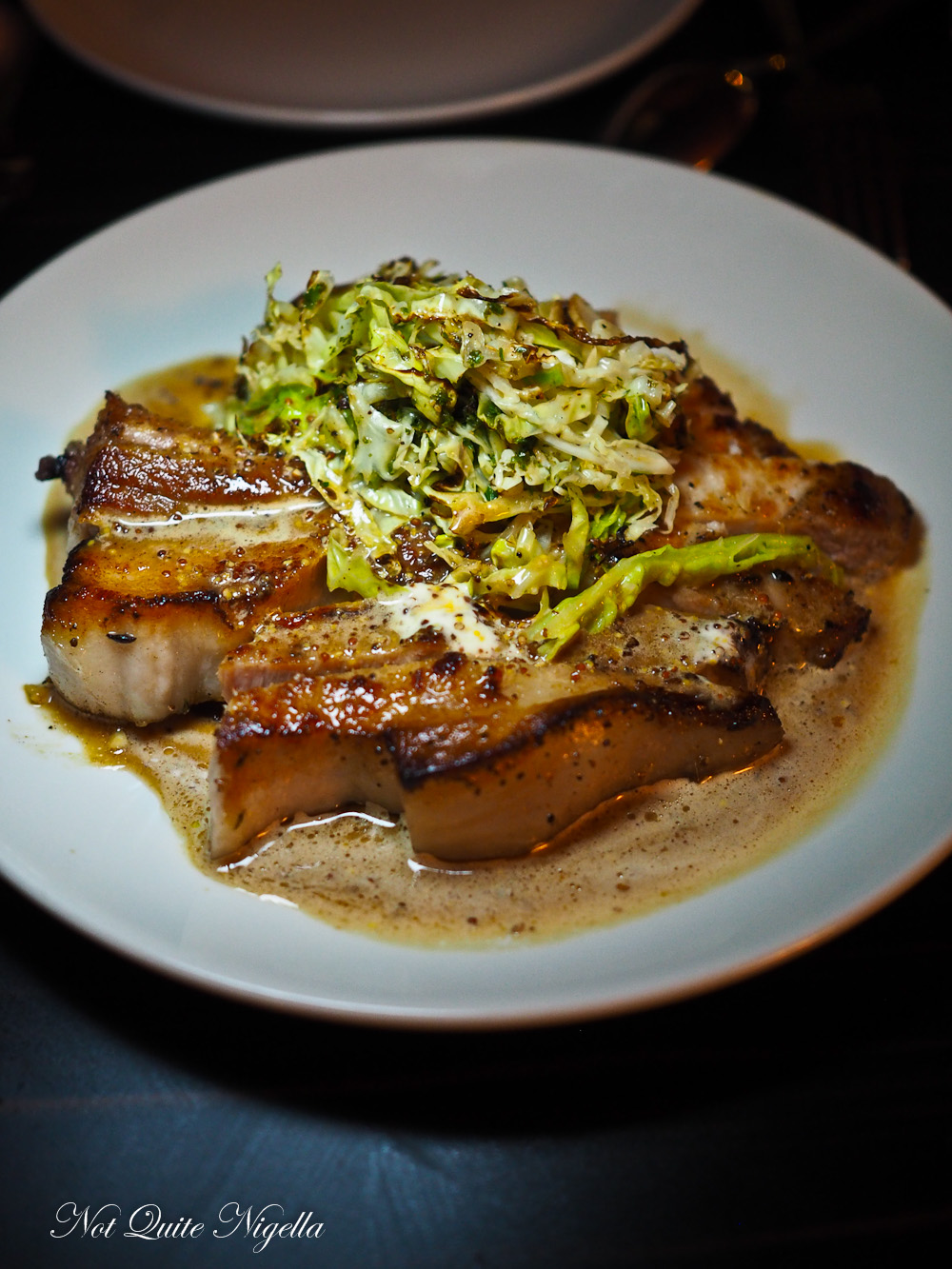 The pork cutlet suffers no such fate. They were a bit worried because they thought that this would be too small for us but it's actually quite sizeable. It's a luscious pork cutlet that comes already sliced with soft savoy cabbage and a glorious burnt apple puree. It's my favourite dish of the night and the pork pieces include some luscious fatty pieces as well as leaner slices. And that sauce is just made for the bread. 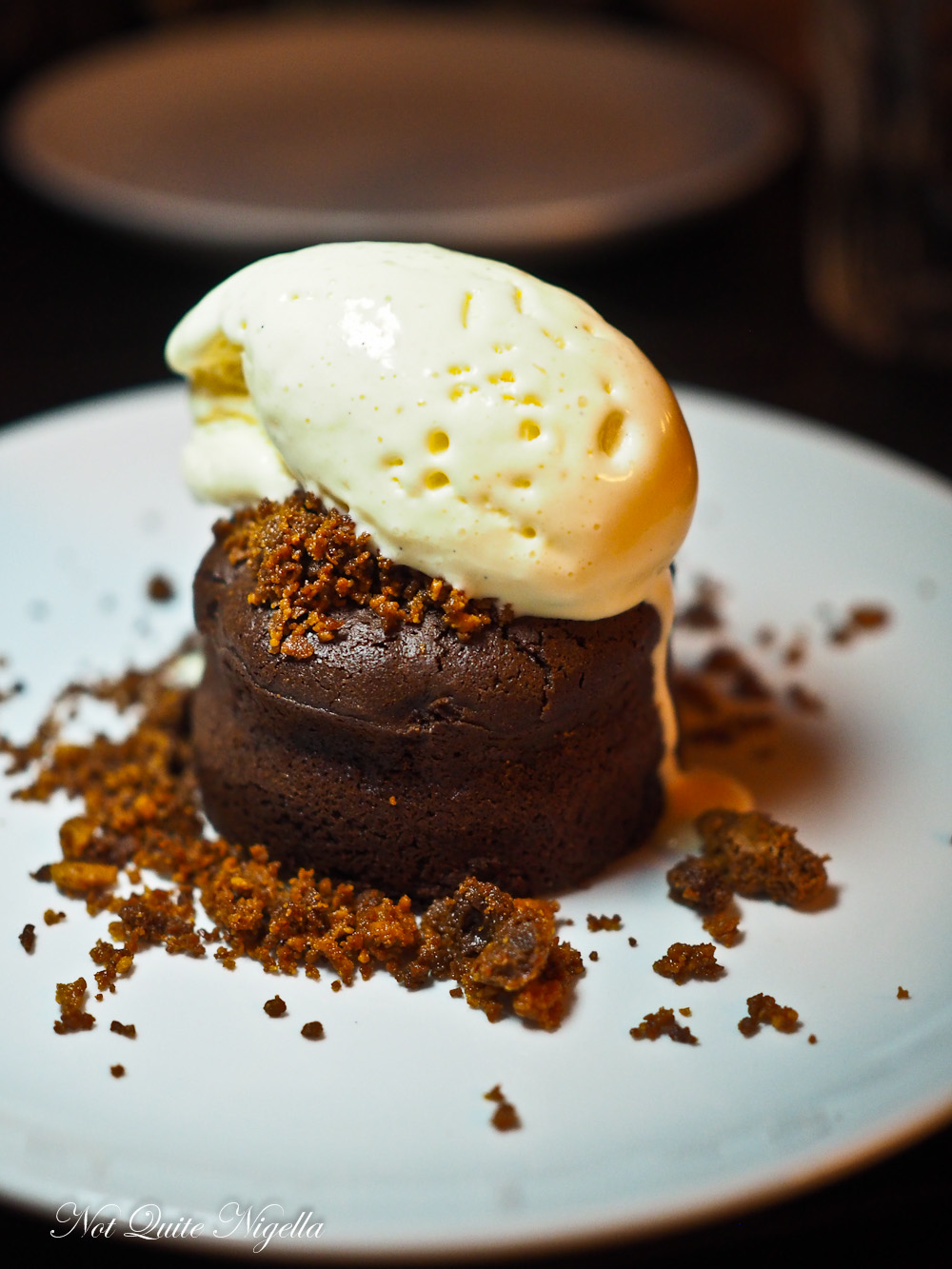 Our trade off for two mains was that we would have room for dessert. There are three items on the dessert menu plus cheese and clearly one item is supposed to be the star of the show: the Rum Baba spice with spiced pineapple and creme diplomat. There are in fact 5 different rum enhancements offered for it for the rum aficionado. But being contrary sort of gals (nasty gals! ;)) we go for the chocolate gateaux. This is a rich, dark gorgeous cake with a caramelised white chocolate buttermilk ice cream and shards of caramel. Alyson points out that it isn't strictly a gateau (she's a Black Forest Gateau lover) as there aren't layers of cream in it but it doesn't stop us from polishing it off. And then declaring ourselves full.

So tell me Dear Reader, do you ever go heavy on the entrees and light on the mains? Are you a rum aficionado?