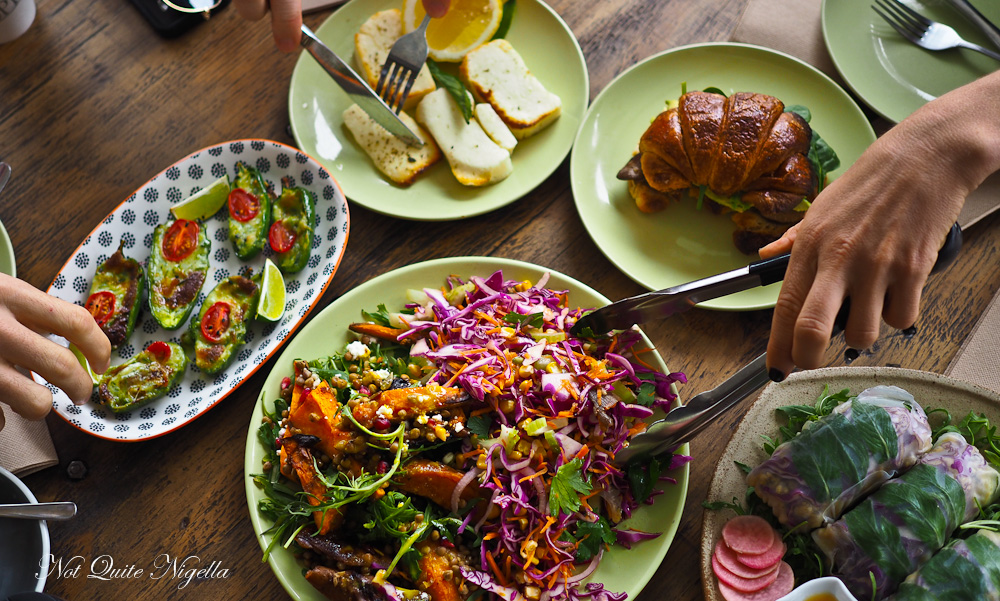 The Press refers to both a coffee press and a juice press and at this tiny cafe on Cronulla Street they serve excellent coffees (try the dirty chai, a mix of coffee and chai) as well as a colourful range of vegetarian and vegan food. 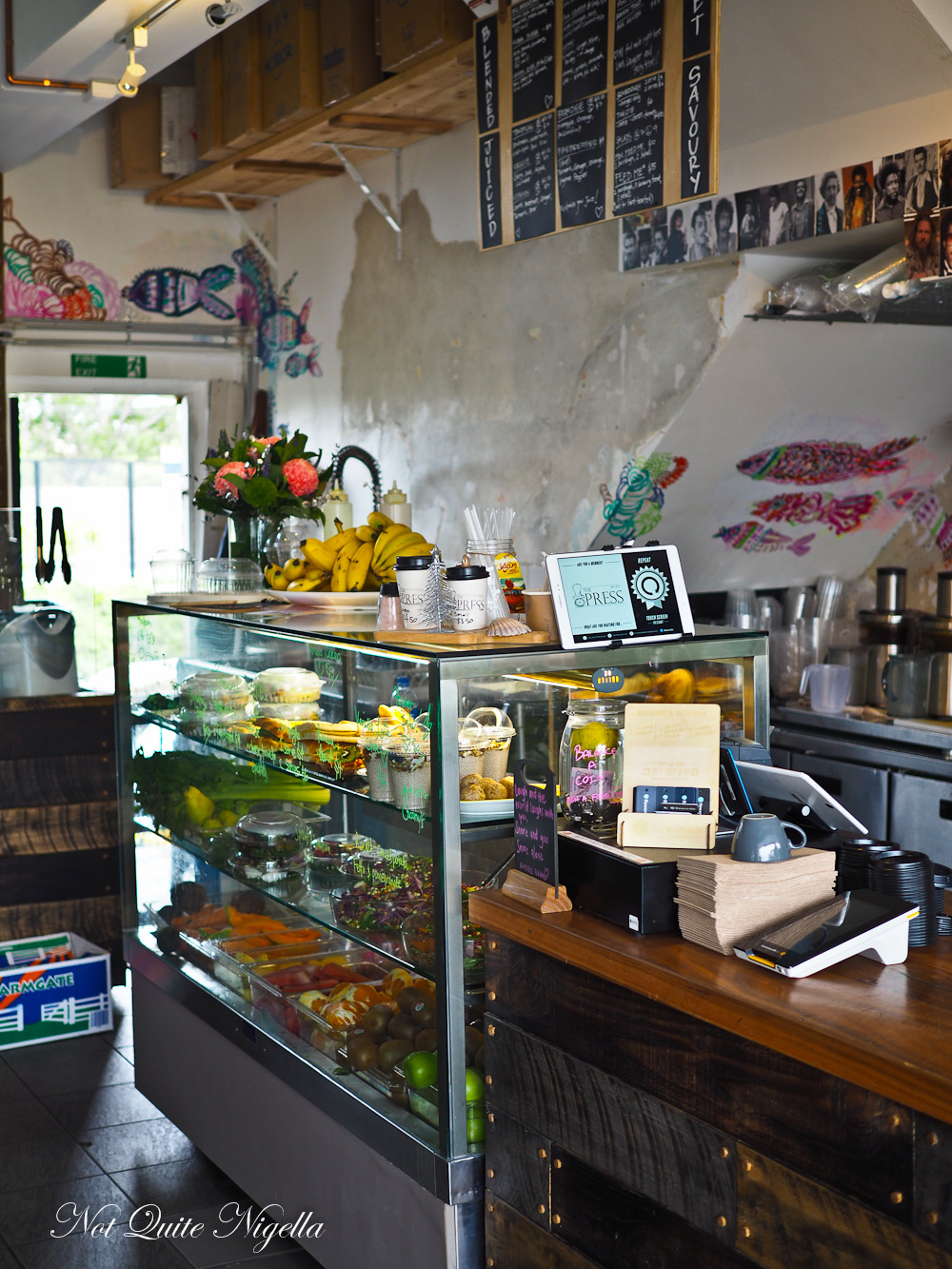 I was convinced that Nina had deliberately not told me that we were going for a vegan and vegetarian lunch. Not that there's anything wrong with that. 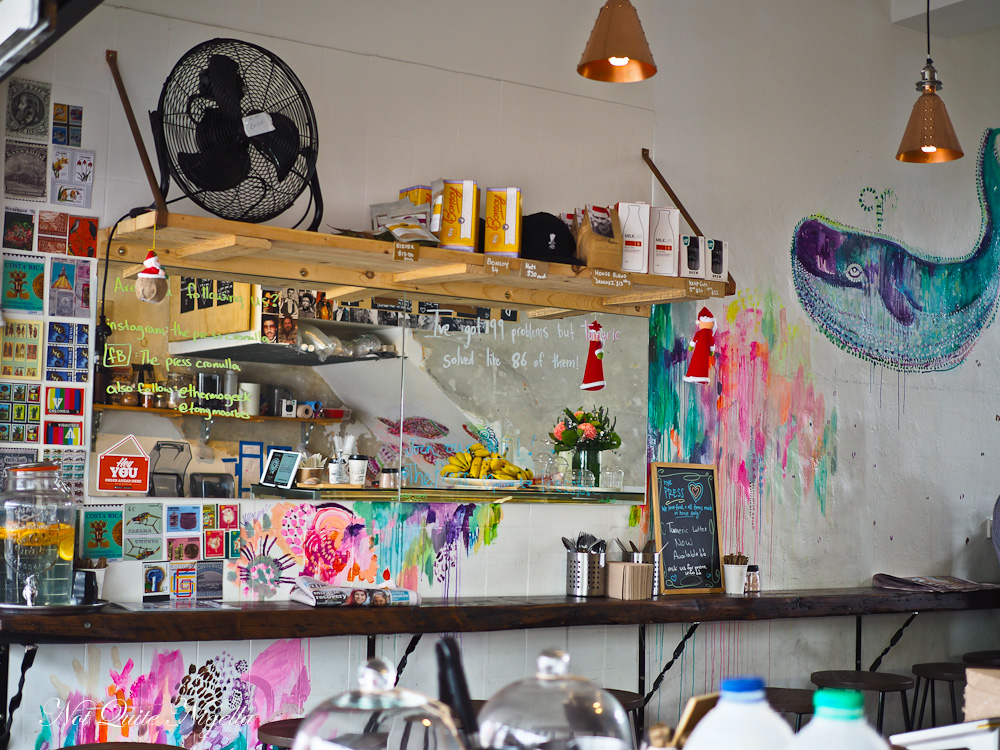 Nina has a group of wrestling buddies who seem to open cafes. I'm not sure if it's a common thing but one happens to own The Press and a visit there coincided with her new resolve to trying to break out of her 10km from home zone. I looked the menu online and there were just smoothies. "Nina I'm not travelling an hour for smoothies or juice you know." "Don't worry!" she said gaily, "There's lots of food!". 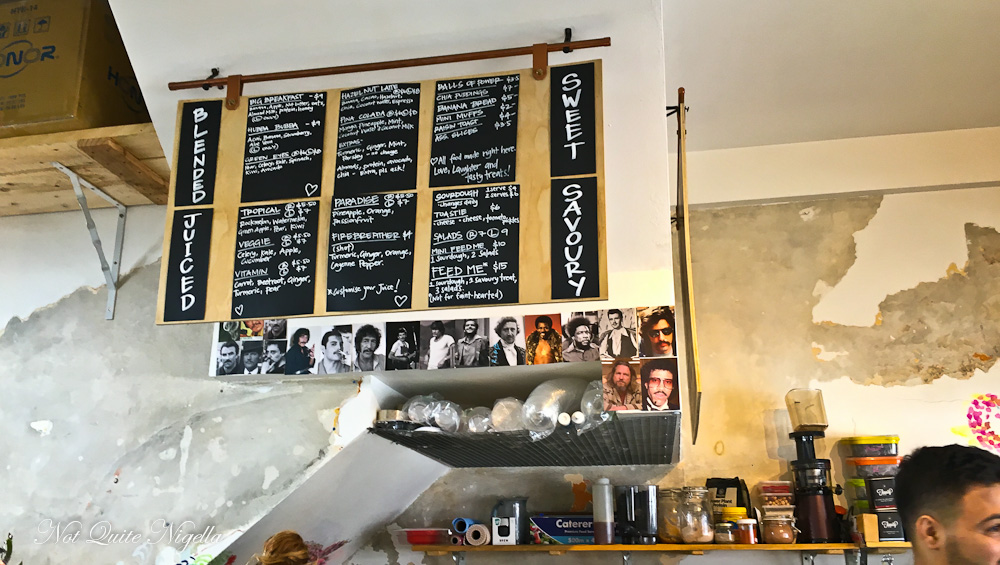 Mr NQN and I arrive there first and secure a table outside as Nina and Garth are bringing Mochi and Elton who she is dog sitting. There is no menu and nobody offers to take our order and we are just sort of looking around for about 10 minutes before Mr NQN asks if he can order a drink.

Truth be told the barista and waitress aren't overly friendly at first, it wasn't until Nina and Garth arrived and the owner Joshua came out that service warmed up. The business is owned by Joshua Moarbes and he also owns the Fruitland fruit store across the road. It was originally set up as a juice bar but morphed into a cafe and eatery. 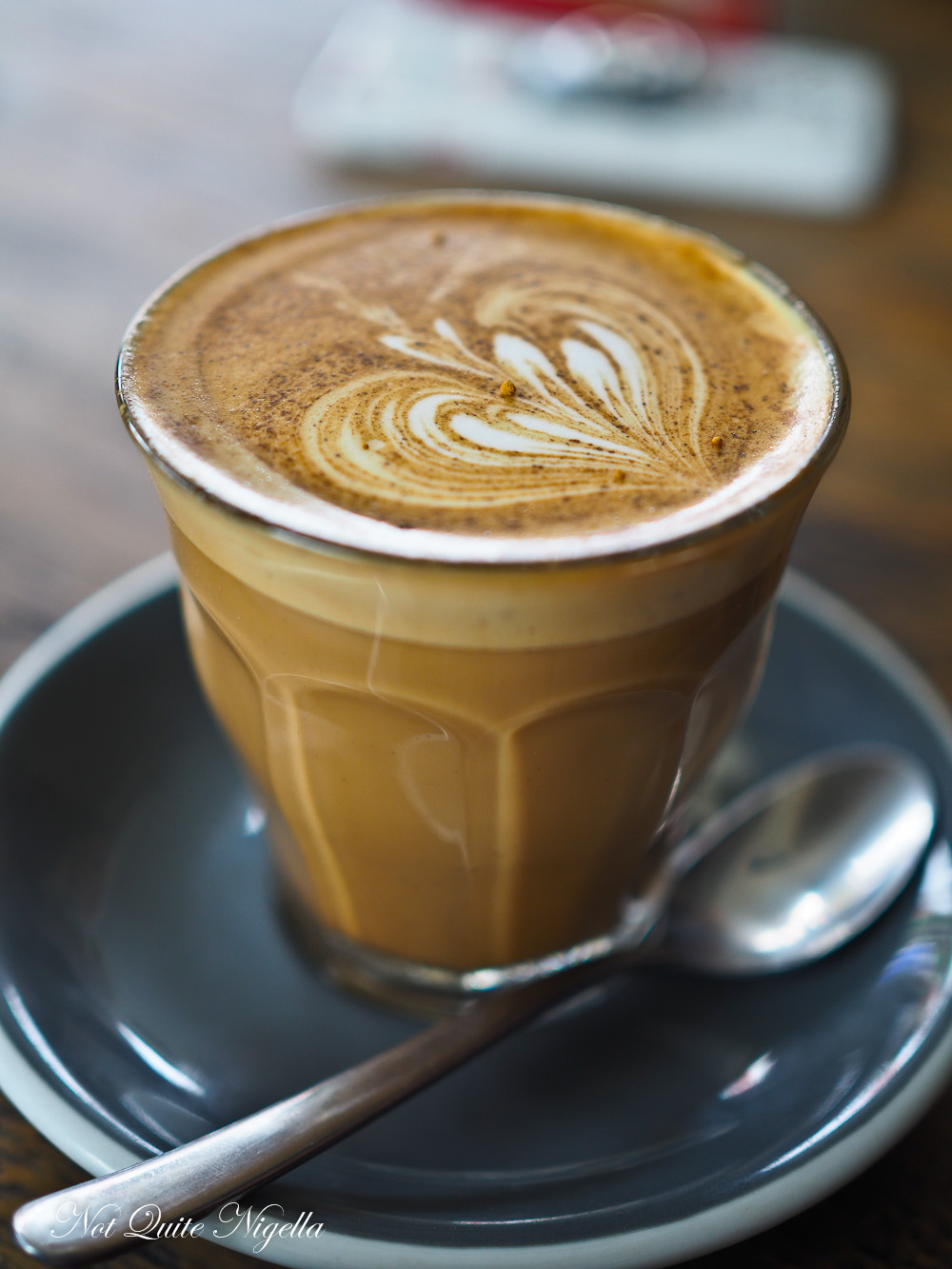 Mr NQN has a long black and I go with a Dirty Chai. The latter is a mix of chai and a Little Marionette coffee. Can I say that I'm a huge fan of this drink? It's got just the right ratios of everything in it. And who knew that coffee and chai were such a good pairing? 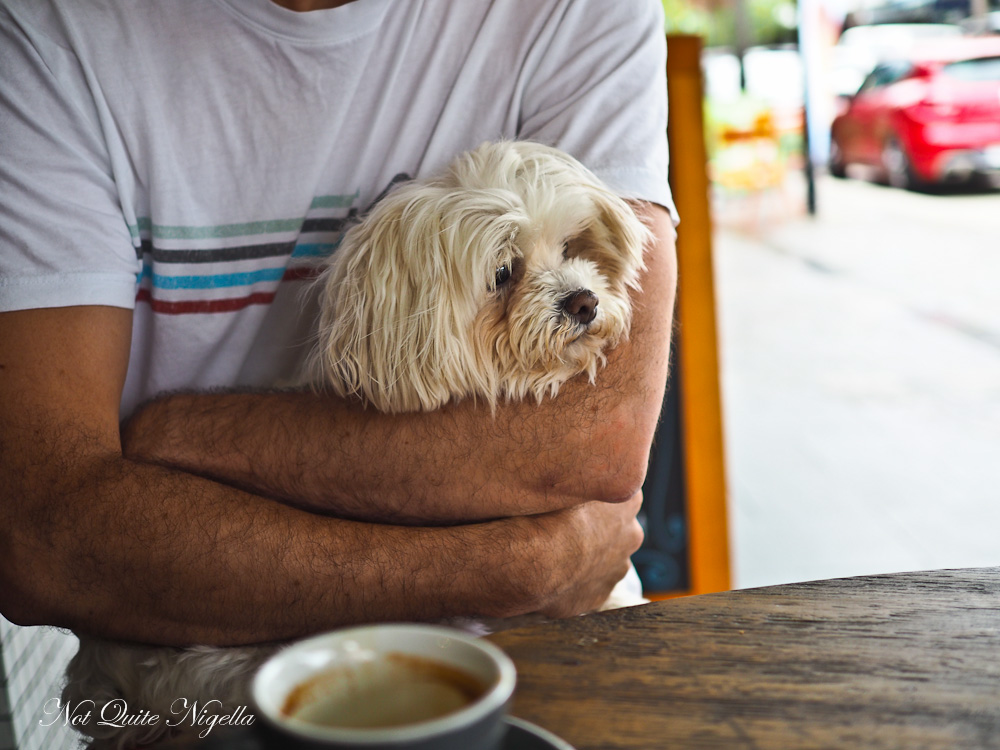 Now onto food matters. Joshua explains that come the new year there will be an menu menu which is a good thing because the current system is a bit confusing. All of the food is vegetarian and vegan which delights Nina who suddenly remembers that she didn't tell anyone. "Oops!" she says covering her mouth with her hand. "Don't tell Garth ok?" she whispers to me and I nod, conspiratorially. 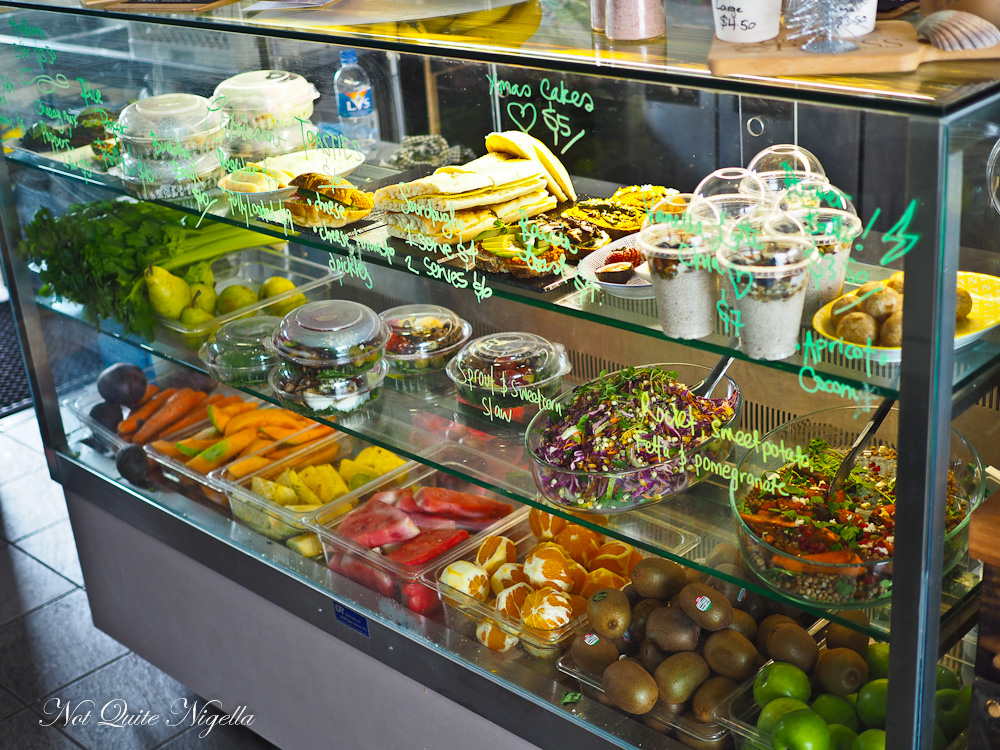 We just ask Joshua to bring us lots of food asking for the bruschetta, halloumi and a loaded croissant. That seemed like the best way to do it because the cabinet display doesn't tel you prices or a lot of detail but I must say that the photo lineup of famous men with moustaches made me pause and ponder. 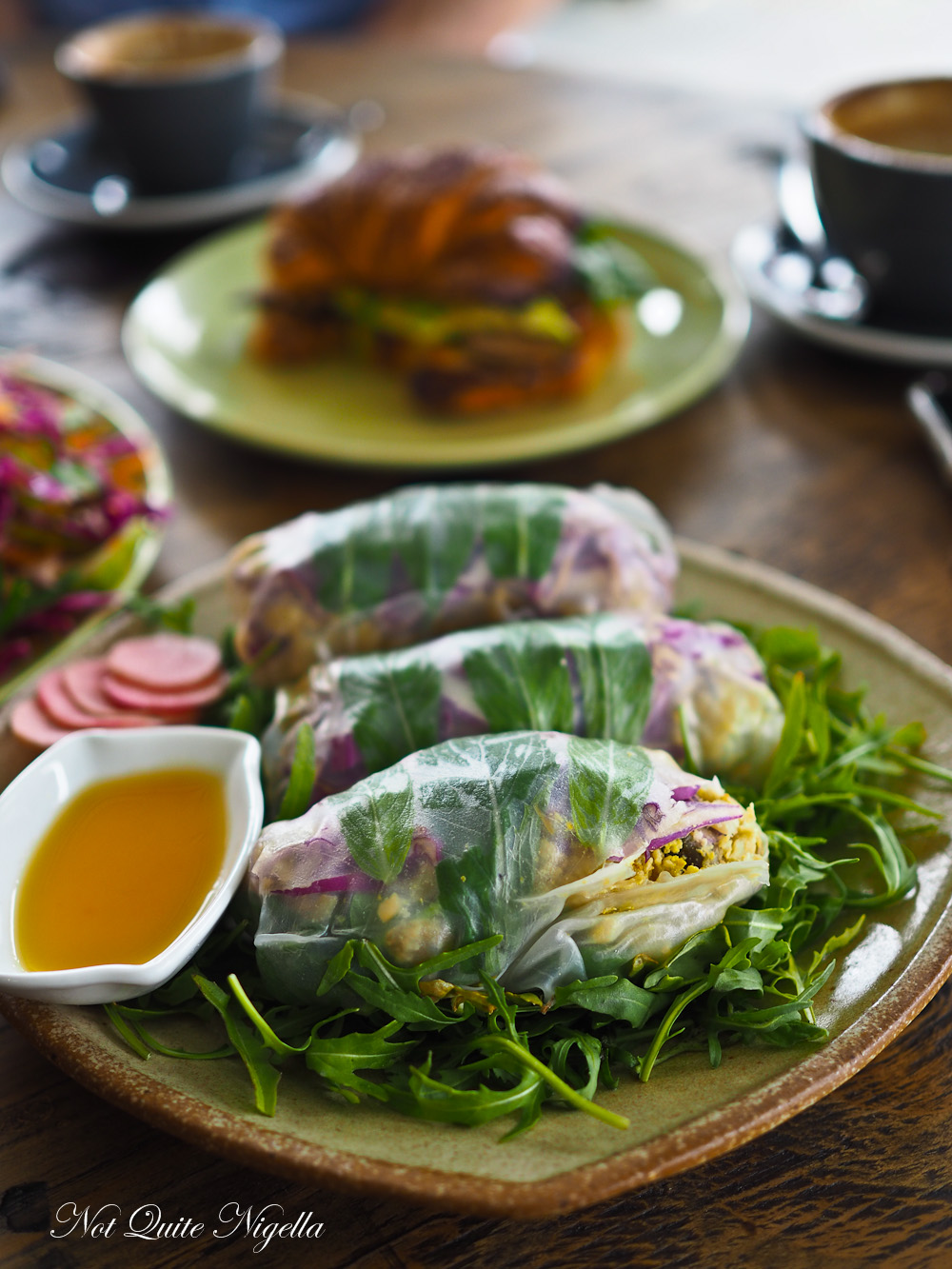 It's a very colourful sight seeing all of this food hit the table. The rice paper rolls comes stuffed with red cabbage, cous cous and mint and tofu with a ginger dipping sauce. He tells us that everything is house made here including the sauces. 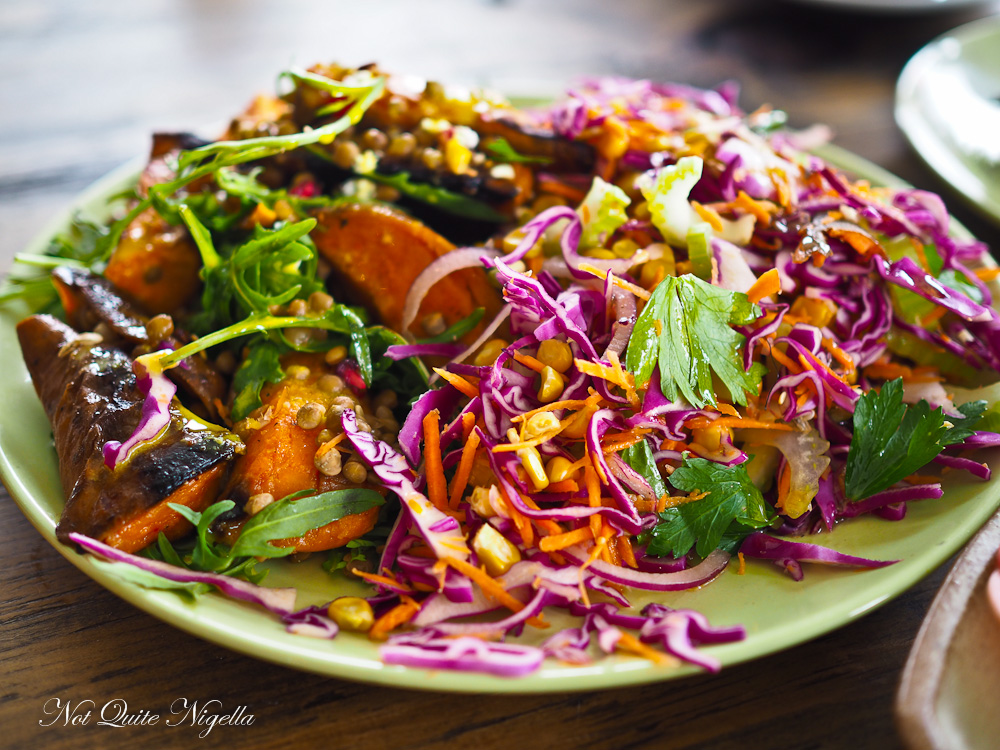 The "Sprout and Sweetcorn" salad is made up of a range of vegetables from carrot, corn, parsley, red cabbage and celery with a light dressing and on the side is a roasted sweet potato & feta salad with green lentils and rocket and a tangy dressing. At this point I'm pining for some halloumi because while this is refreshing and healthy I need cheese if I can't have meat. 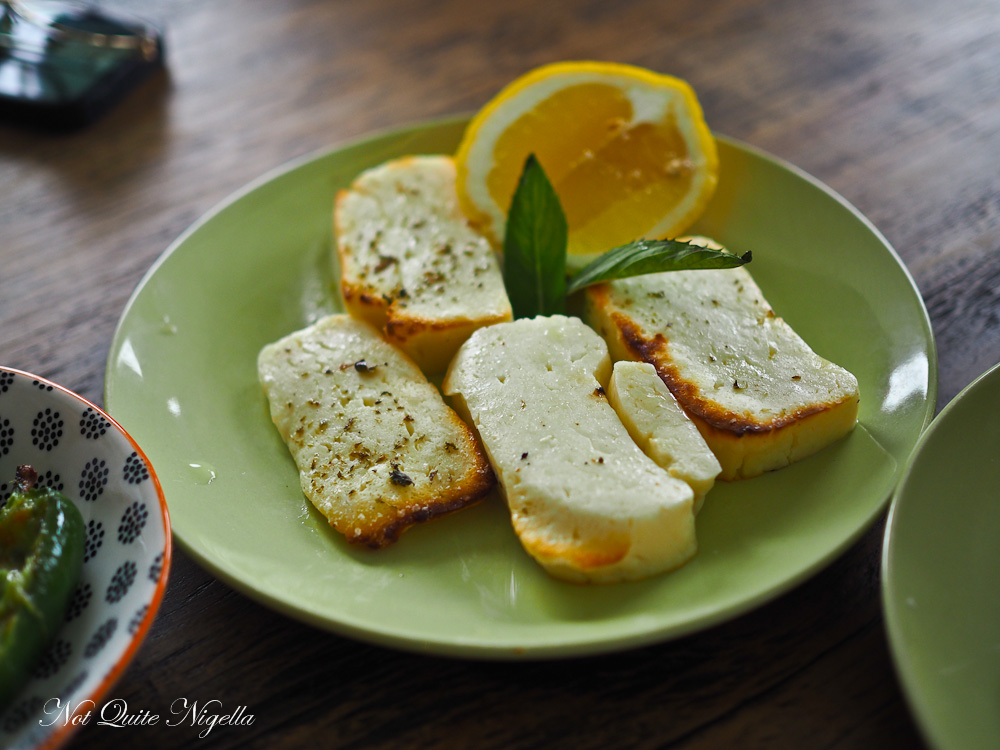 How good is halloumi? Like bacon for vegetarians it adds so much flavour and we douse our slices with lemon juice and eat it with the salads. 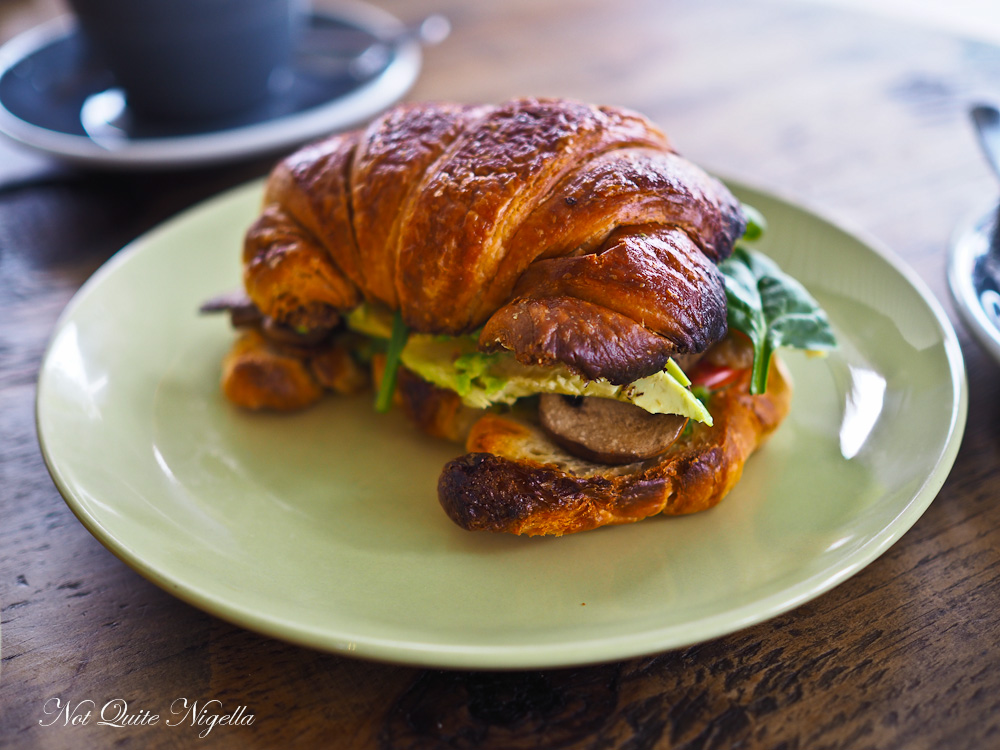 I'm a big fan of toasted croissants-it makes these treats even crunchier and you can have a regular croissant or a fully loaded one. I'm not sure what either entails but given the choice of regular and fully loaded you can bet I'll get it loaded. There's baby spinach, mushrooms and avocado inside the croissant and I really enjoy this. 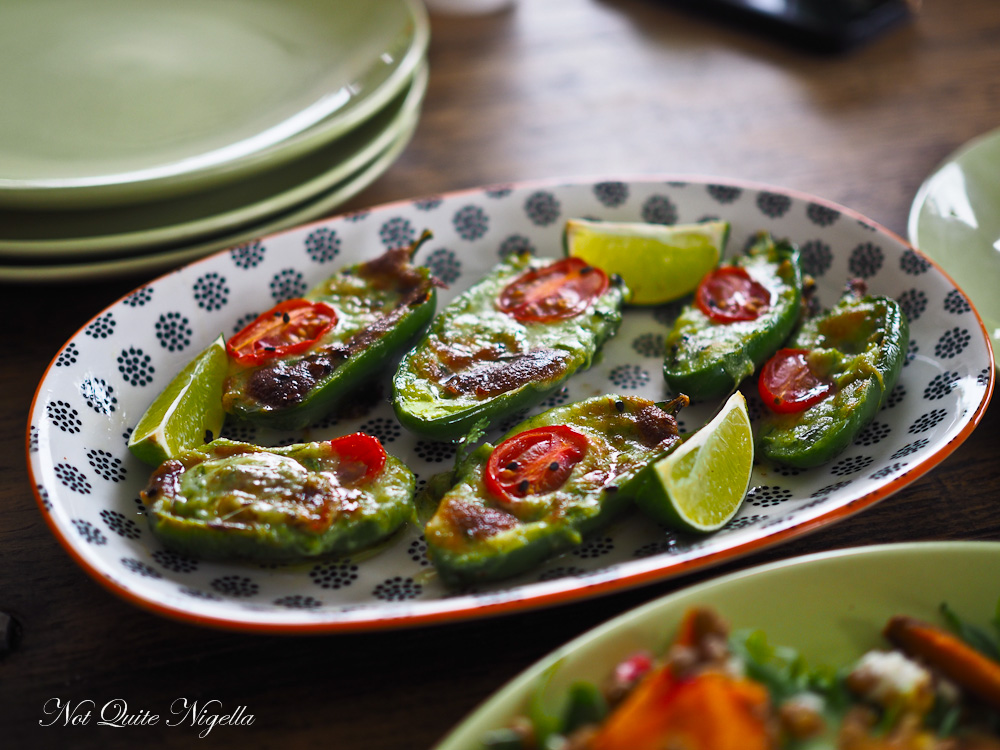 The jalapeno peppers are split in half and then filled with cheese and tomato and then grilled. As the name suggests they're perfect for popping in the mouth and between this, the halloumi, a couple of the sourdoughs below and loaded croissant they're my favourites. And I think Nina has gotten away with the whole vegetarian thing because neither Garth nor Mr NQN have noticed that it's all vegetarian. 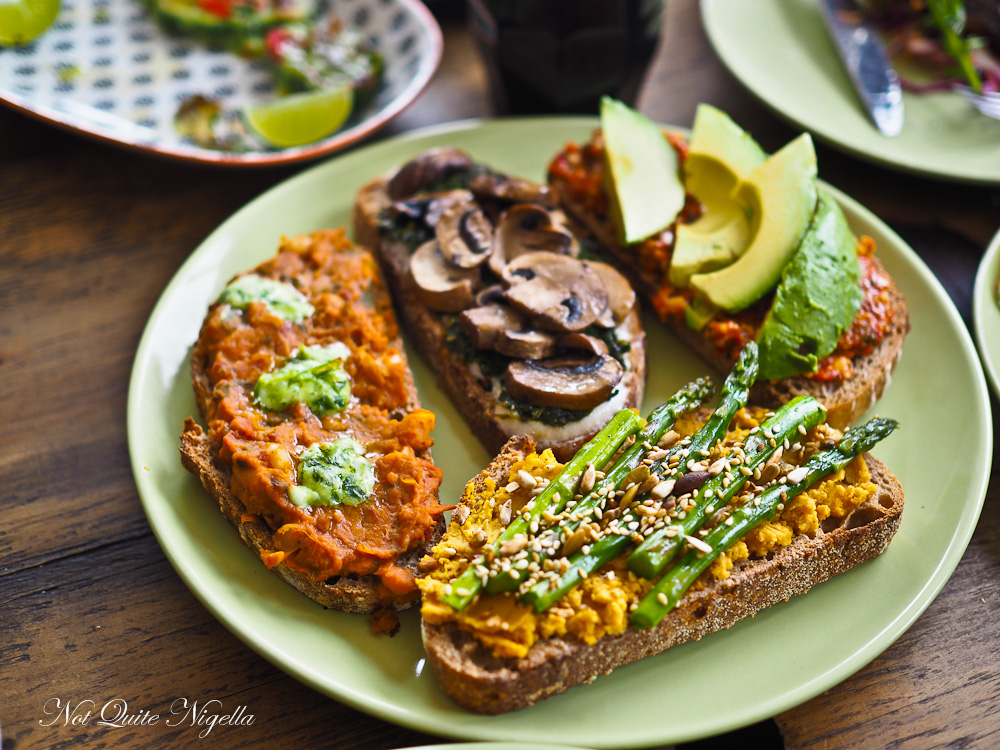 There are four varieties of sourdough slices each day and it does change although the mushroom and pesto one is always available. There's also a pumpkin and asparagus and a sweet potato one but my favourite is the capsicum one with avocado. 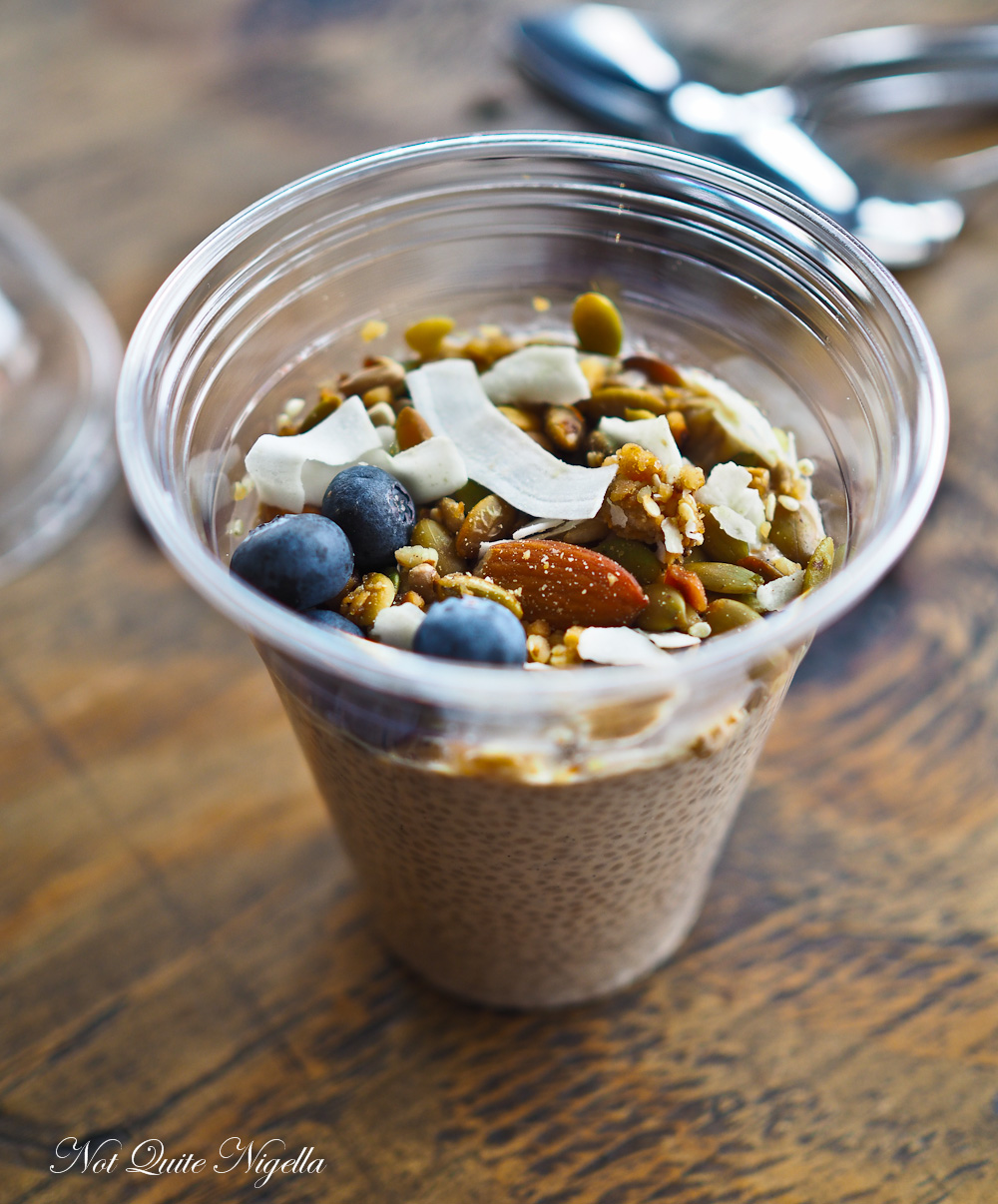 Nina loves the chia pudding which is creamy with coconut and crunchy with nuts, seeds and coconut as well as plenty of berries. I think I prefer things a bit sweeter but that's just me. 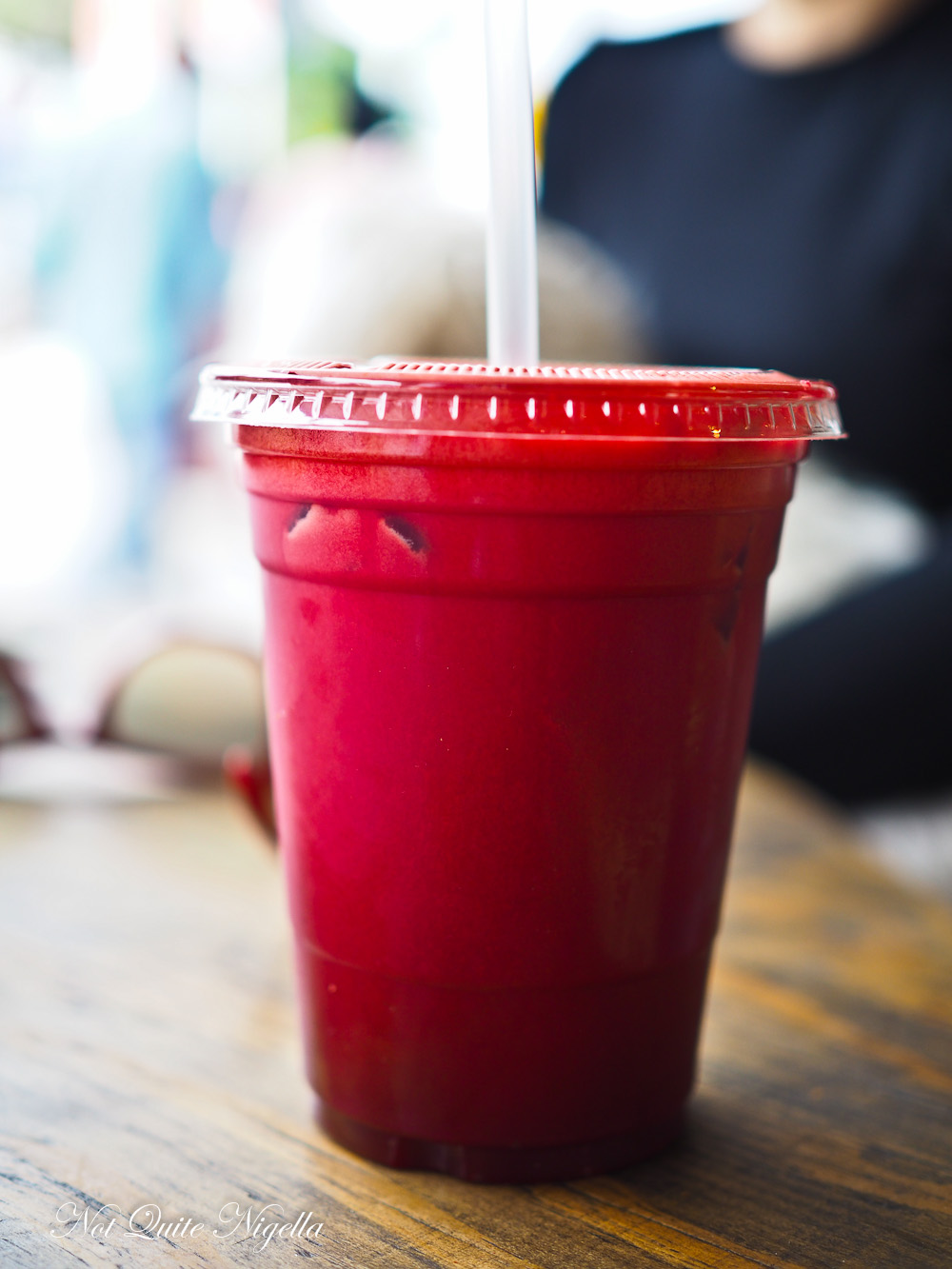 We end off with a juice-the name The Press references both the coffee press as well as the cold pressed juices. And lo and behold they happen to have my very favourite juice already in a combination-pear, beetroot and carrot! They also add turmeric and ginger in it which adds a great kick to this juice.

So tell me Dear Reader, would you choose a regular or a loaded croissant if given a choice? And would you notice straightaway if a menu was vegetarian or vegan? And what's your favourite juice combo? 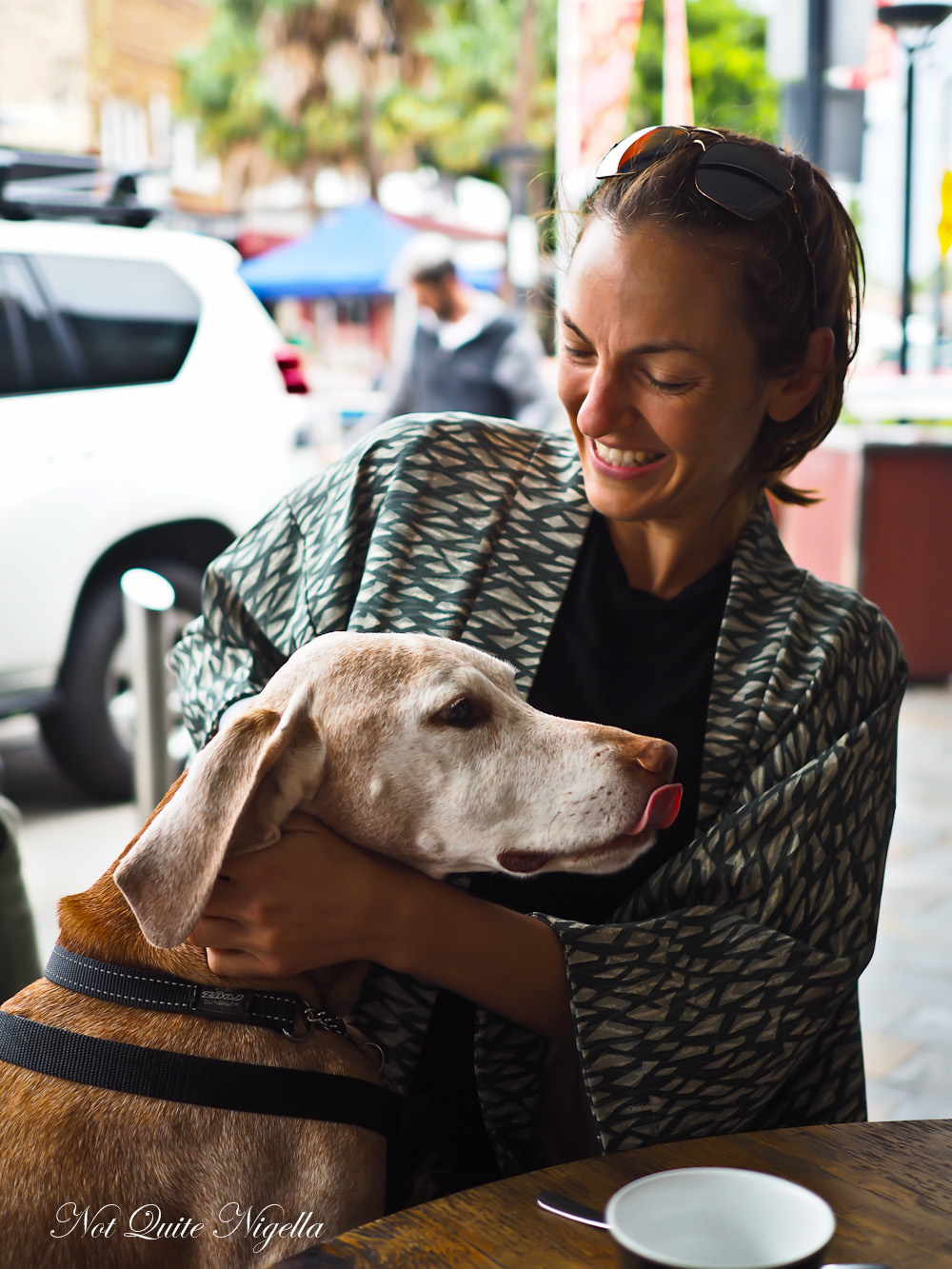