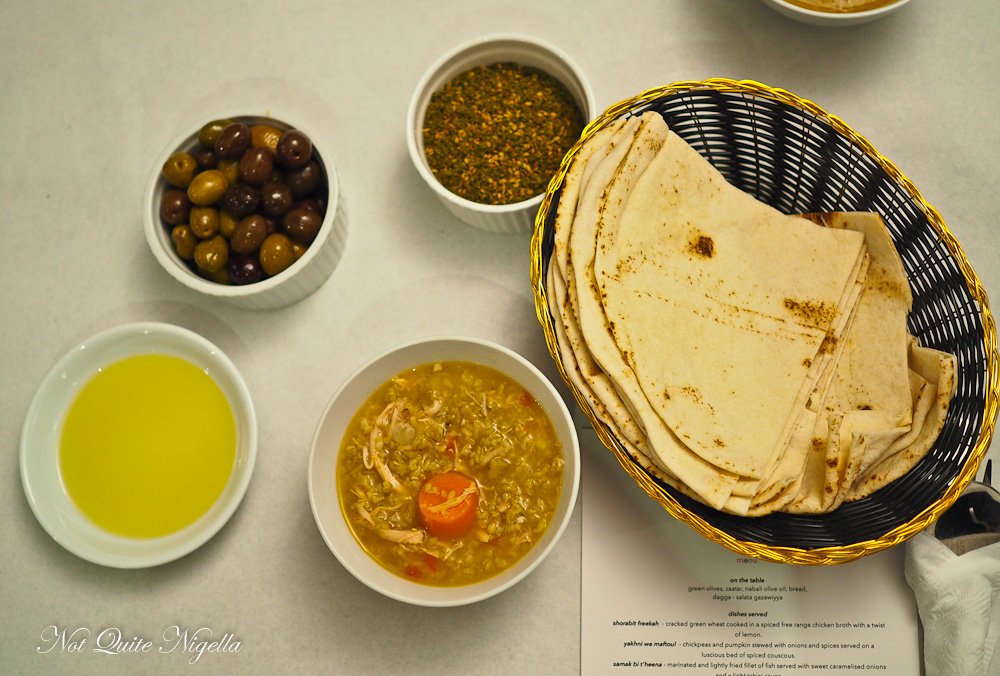 For many of us who have not visited Gaza in the Middle East, the flavours from the region are quite new to us. The food in the area is highly regional, even in the small slender coastal strip of Gaza. So what is Gaza cuisine like and what sort of flavours are used? What challenges do people cooking face every day? We found out more from acclaimed food writer and activist Laila El Haddad on her recent visit to Sydney. 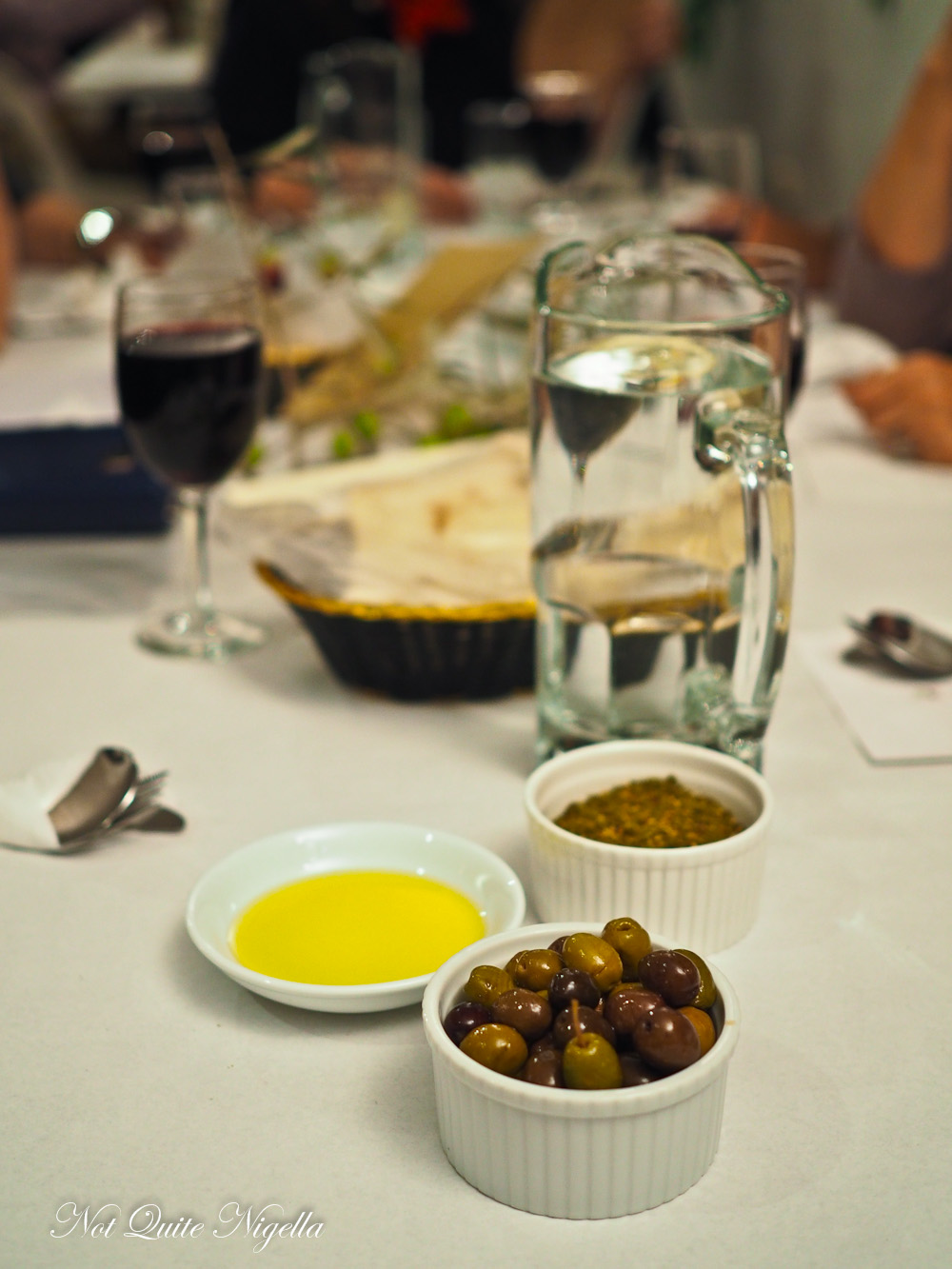 Laila El-Haddad is a blogger, cookbook writer, policy advisor, public speaker and activist. You may have read her blog Gaza Mom or seen the episode of "Parts Unknown with Anthony Bourdain" with the episode on 'Jerusalem, the West Bank, and Gaza' where she showed him all about Gaza food.

Laila was recently in Australia for the Melbourne Food And Wine Festival where she was hosted by the Australian Jewish Democratic Society. After Melbourne, she travelled to Sydney with her family and was the guest of honour at a dinner at the Yaama Dhiyaan reception centre in Redfern held by the Palestine Fair Trade Australia. On the menu was a delicious range of hand picked Gaza inspired dishes from her 2013 cookbook, "The Gaza Kitchen: A Palestinian Culinary Journey" co-authored with Maggie Schmitt.

The Outsider's Image of Gaza 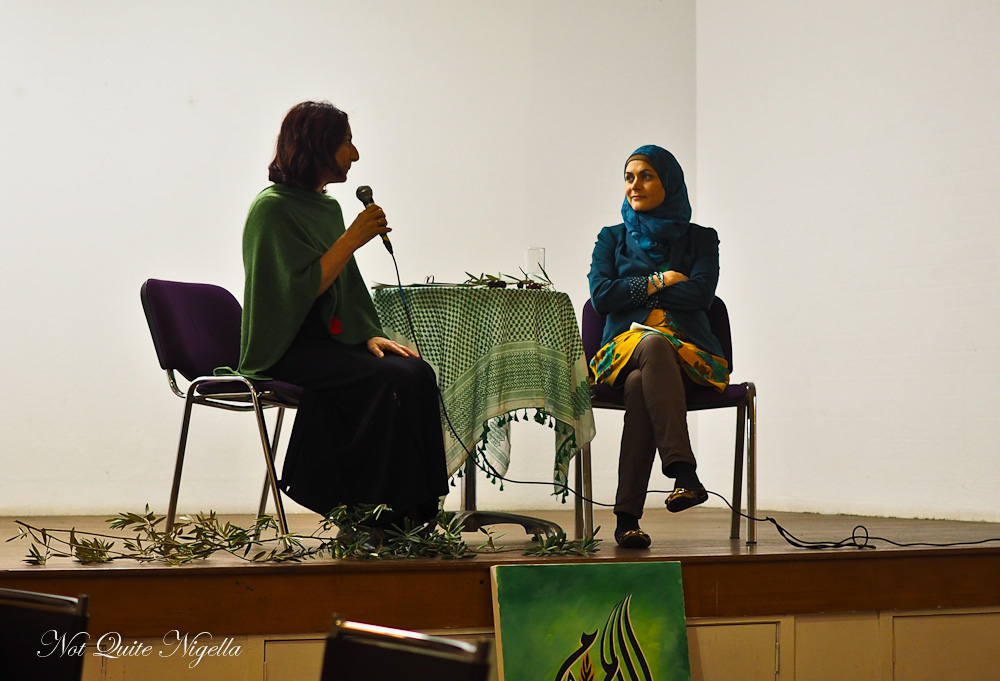 Laila tells me that as a public speaker she usually starts her talks with news images of Gaza, "The stereotypical image that people have of Gaza is a shot from a camera from the horizon from afar, it's a bombed out building and it's just a cinder block landscape...these are the images you usually see of Gaza... if it's not gunmen, or bombed out buildings, or grey landscapes it's wailing women or crying children or destruction. You have this one one hand, Gaza as constantly subjected to violence and Gaza the victim. And even those well meaning individuals who might feel for Gaza or empathise. The first thing that comes to mind is 'Oh, poor Gaza'."

"Our hope was to get beyond that and turn the image on it's head and start on the inside in the most intimate of domains in the kitchen. Where it was our analysis that this is a place where Palestinians still exercise a form of control where they appear to have lost all other aspects of control over their life and livelihoods." 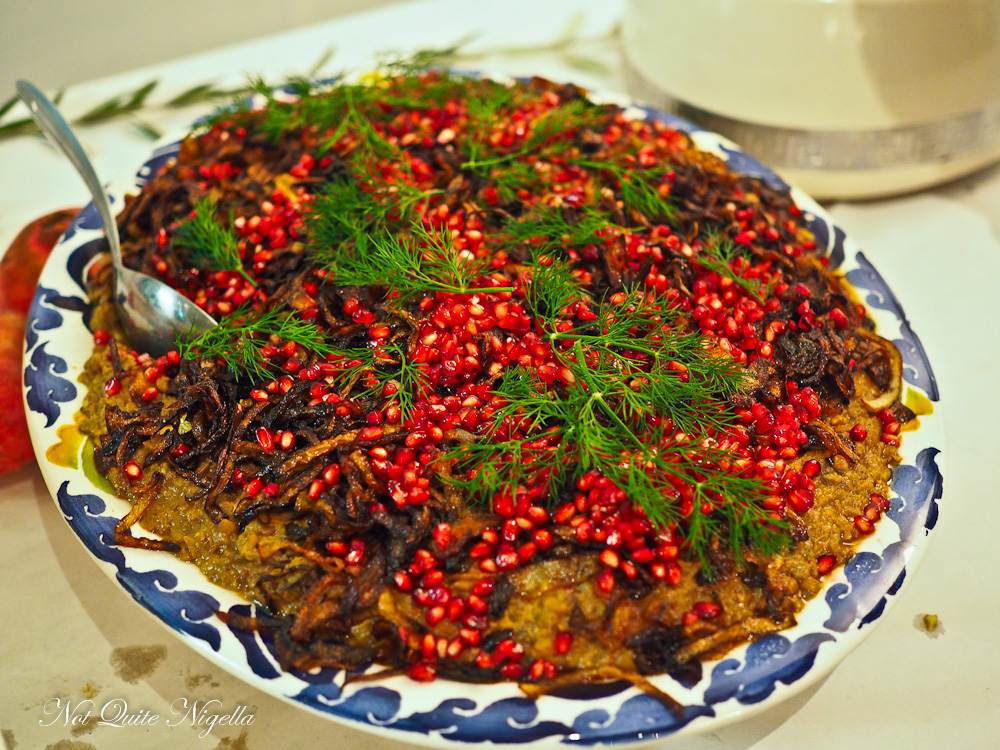 Rumaniyya, originally from Yaffa, a popular Gazan dish of brown lentils and eggplant cooked with pomegranate, chilli and spices

She says that it is in the kitchens that the recipes and culture are passed down through generations, a sort of resistance movement. "You can continue to cook the sorts of things your grandmother and great grandmother cooked, from whatever villages that may no longer exist...yet we frequently say you can still taste them through the food. It's this, what we refer to as an ordinary, everyday, resistance if you can call it a resistance or whatever, that Palestinians can still exercise without interference."

The Flavours and Dishes of Gaza 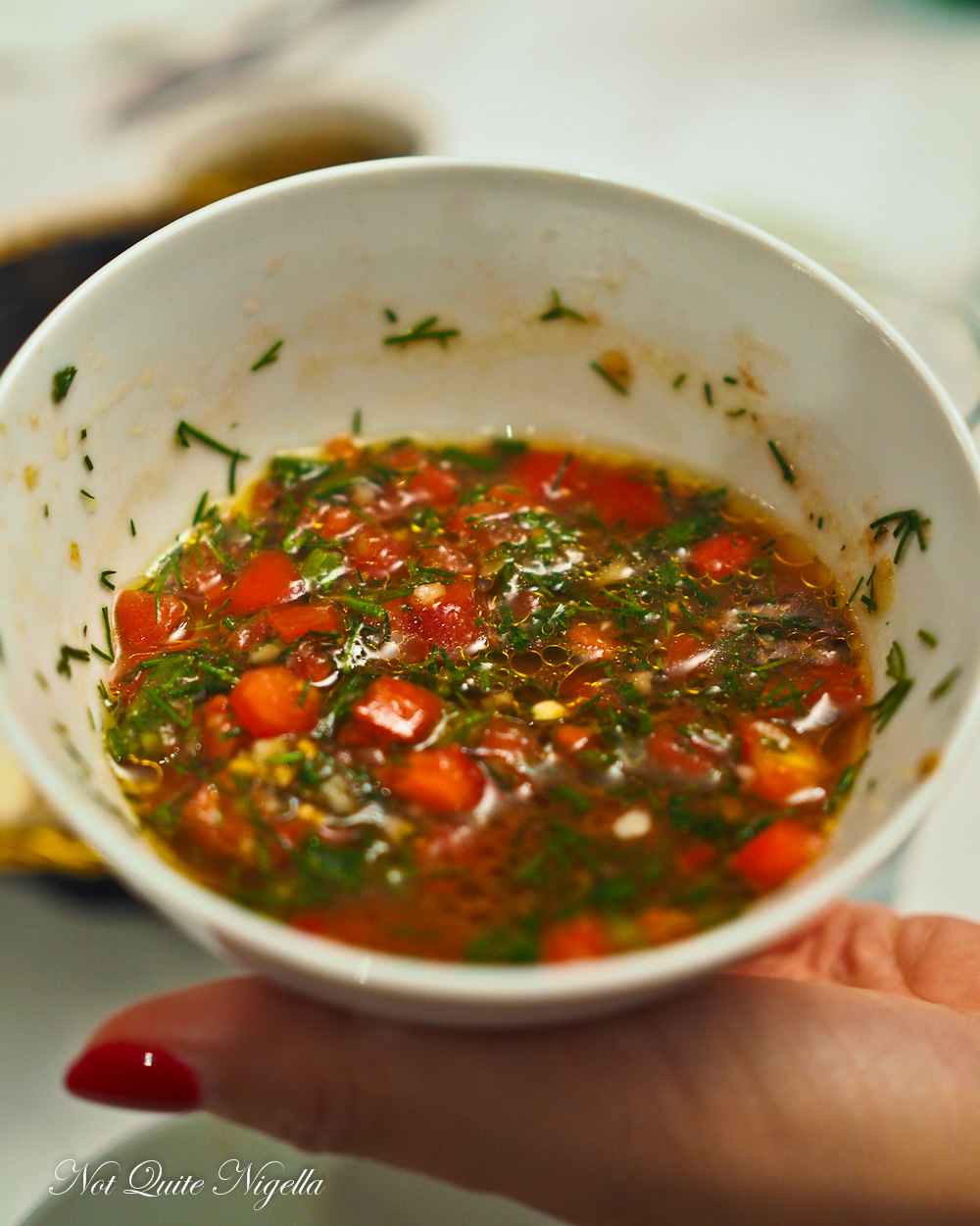 Middle Eastern cuisine is widely available but what is Gaza cuisine specifically? Laila says, "The most ubiquitous taste or the one that most people associate with Gaza is the piquancy of the cuisine and by extension, the kind of fiery nature of the people and their spirit. Something that I always grew up with on every supper, and sometimes breakfast is Dagga Salata Gazawiyya, dill and hot tomato salad. My grandmother used to call it the centrepiece of the table, the Gazan table. It's almost like a salsa. Its pounded in a mortar and pestle. It's tomatoes, dill, chilli peppers, garlic that are mixed together and then topped with olive oil. That's very Gaza city. Then there is a fish in a tahini sauce that's sort of typical of the coast." Incidentally the fish dish was my favourite of the night, from a menu that was absolutely delicious. 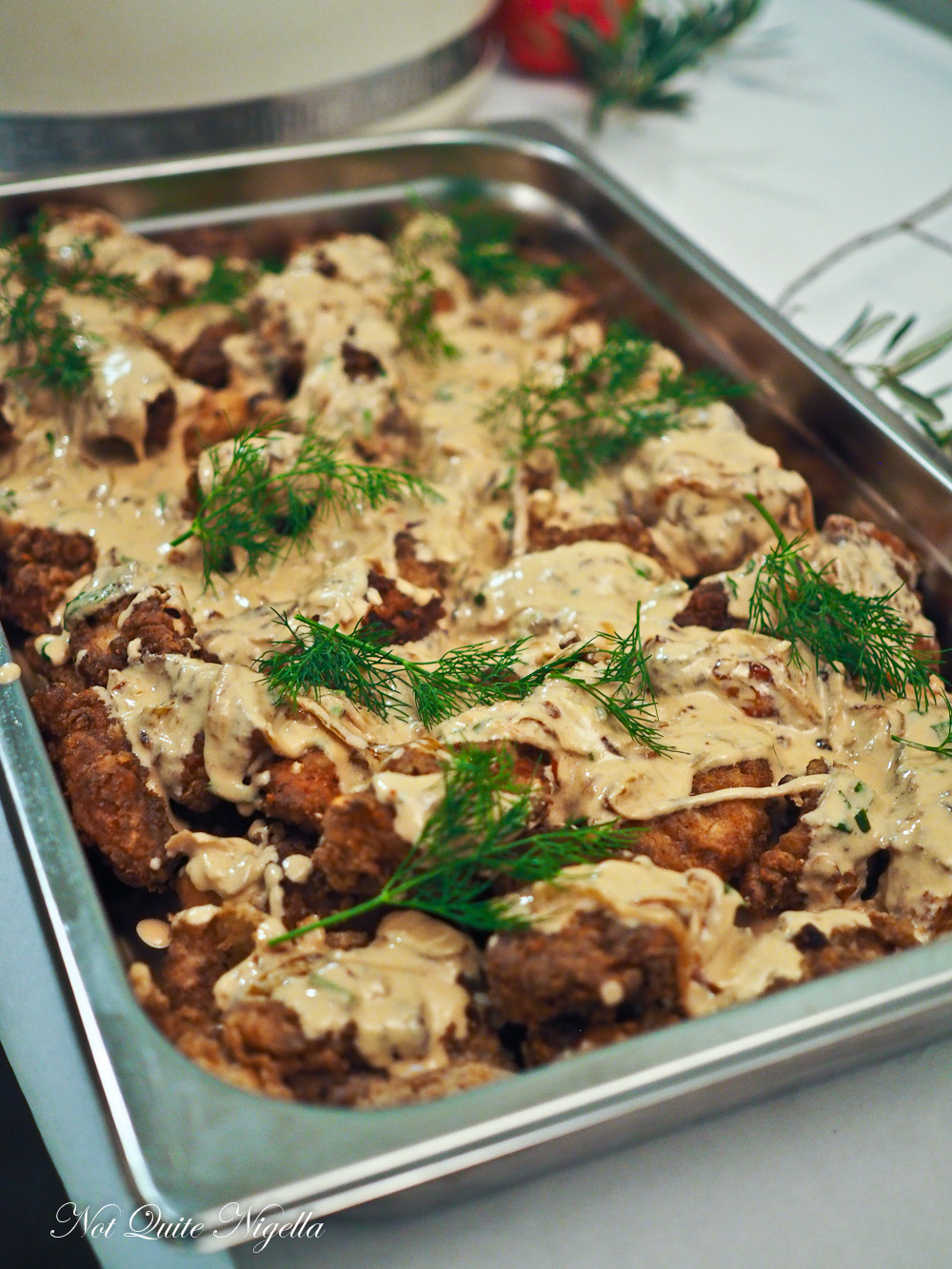 She continues, "Then you have sort of the rural tradition of the farming inland Palestinians who originally were refugees from other parts of Palestine outside of Gaza and the eastern villages and so on. A dish like Rumaniyya (silky stew of brown lentils and eggplant cooked with pomegranate, chilli, garlic and other spices, originally from Yaffa) would have been more typical for them, more heavy on the pulses and the greens and things like that, and then lentils and so on, and this love of sour flavours and herby flavours.""

The tables where guests sit are a giveaway as they are strewn with olive branches and there are ramenkins of olives and plenty of olive oil available. "You use a lot of seasonal vegetables and grains. Other quintessential dishes are Meklouba is an upside down rice and vegetable dish. Sumac is another major ingredient that's used. All spice is one of the major components as well. In Gaza we use a lot of cumin and dill and so on. So there's similarities with Syrian and Lebanese, but there's also some distinctions. In Gaza they would have very different salads and main dishes that you wouldn't see elsewhere. A lot of one pot meals or things that are cooked, stewed together and then poured into bowls and a lot of peppers, a lot of dill is used. A lot of clay pot cooking as well," Laila adds. 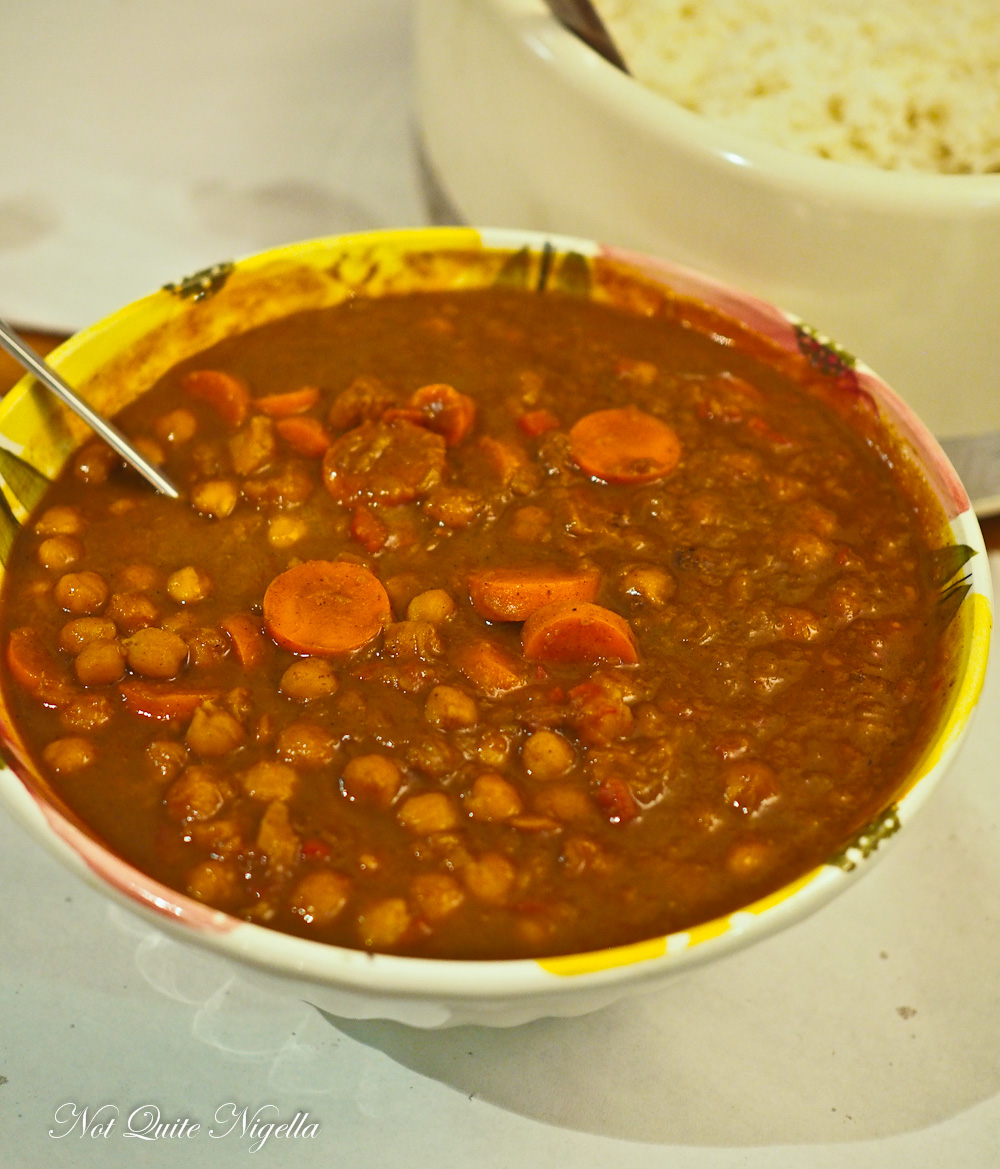 Things such as food shopping which is an easy exercise in Western countries presents a challenge in the Gaza area. Laila explains, "Most people can no longer afford to purchase and use ingredients in the way that they were meant to be used because they're just simply...their purchasing power has been so diminished... Some months or years, the restrictions might be much greater, and some months or years there may be less. It's not always what meets the eye. It may seem like oh, well, things are available and whatever. There's sodas and there's sesame and there's chips. All must be well, right? There's always this illusion of what is and what actually is."

Read Between the Soup

Shorabit Freekah, cracked green what cooked in a spiced chicken broth with lemon

She has found a way to read what food restrictions are in place, "We say read between the lines, but read in between the soup. You look in the soups and what people are using and it's no longer like entire chickens. It might be chicken bones or whatever, or wings. It's no longer fresh sea bream or whatever, it's foreign tilapia. These are the sorts of substitutions. It's not olive oil anymore. It's aid-rationed soya oil. It's not freekeh, it's white rice that's rationed out or whatever." 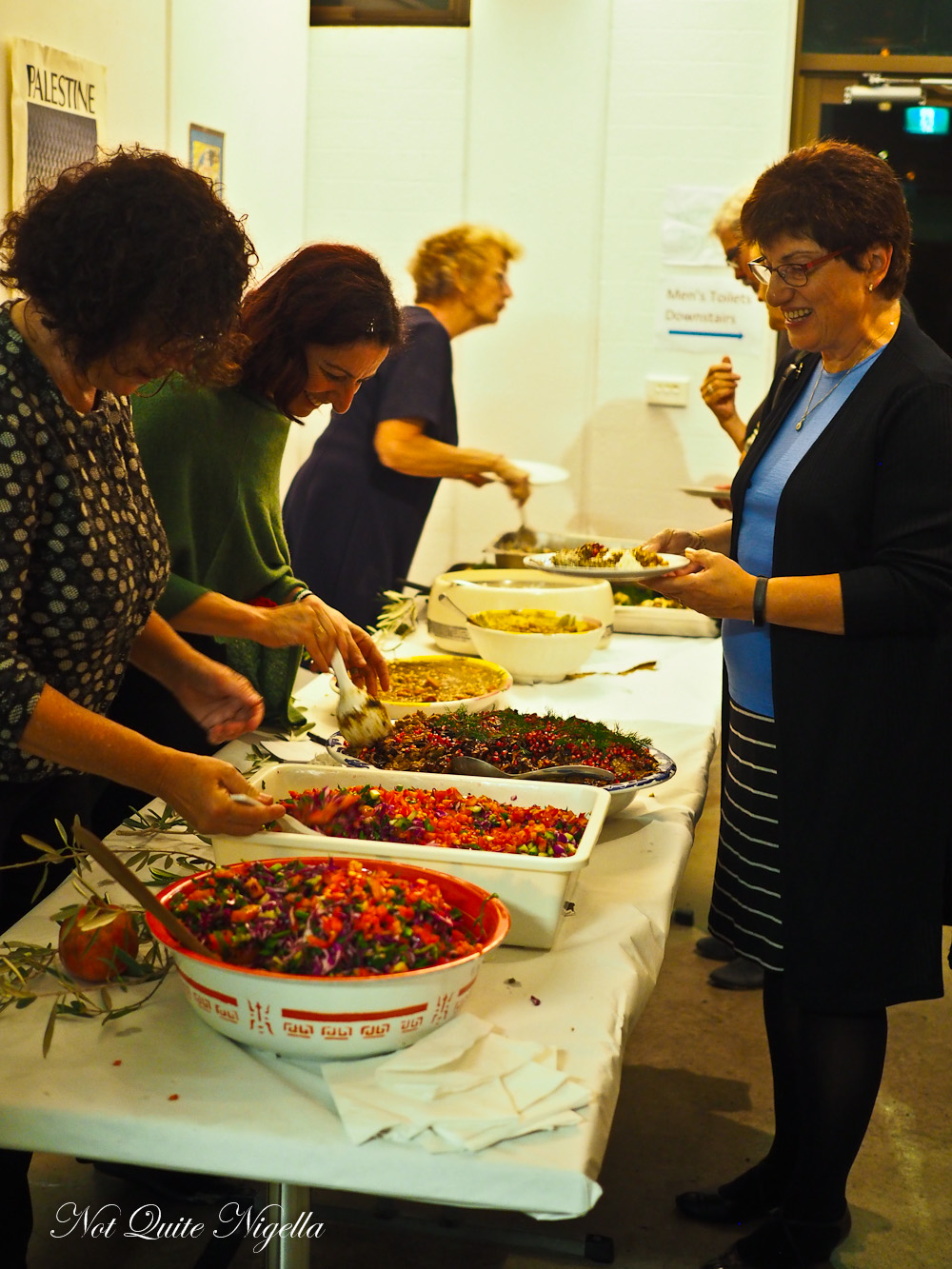 She continues, "The fishing zone has been restricted down from where it was once unlimited in the 1990s it was defined as being a 20 nautical mile limit. I think now it's somewhere between six to nine (nautical miles), something like that. You're not going to be really getting the bigger fish until you go beyond nine nautical miles when you have deep sea currents that bring in those larger fish."

"The result is you are fishing in largely polluted waters, culling smaller fish, threatening future populations, huge ecological impacts beyond the fact that the supply is diminished. The cost is incredibly high and really on the restaurants, the seaside restaurants or whatever will purchase, but the majority of the population again, are buying this new style of farmed fish that has emerged on the scene as of few years," says Laila.

This impacts directly on what people are cooking. Laila says,"They still try as much as possible with as much regional specificity as they can to cook the same kinds of very traditional dishes that their grandparents and so forth made from villages that you may not even recognise or know, and certainly don't exist on any maps, but very much exist in the collective memory of those people who are from those places."

Living Away from Gaza in the U.S. 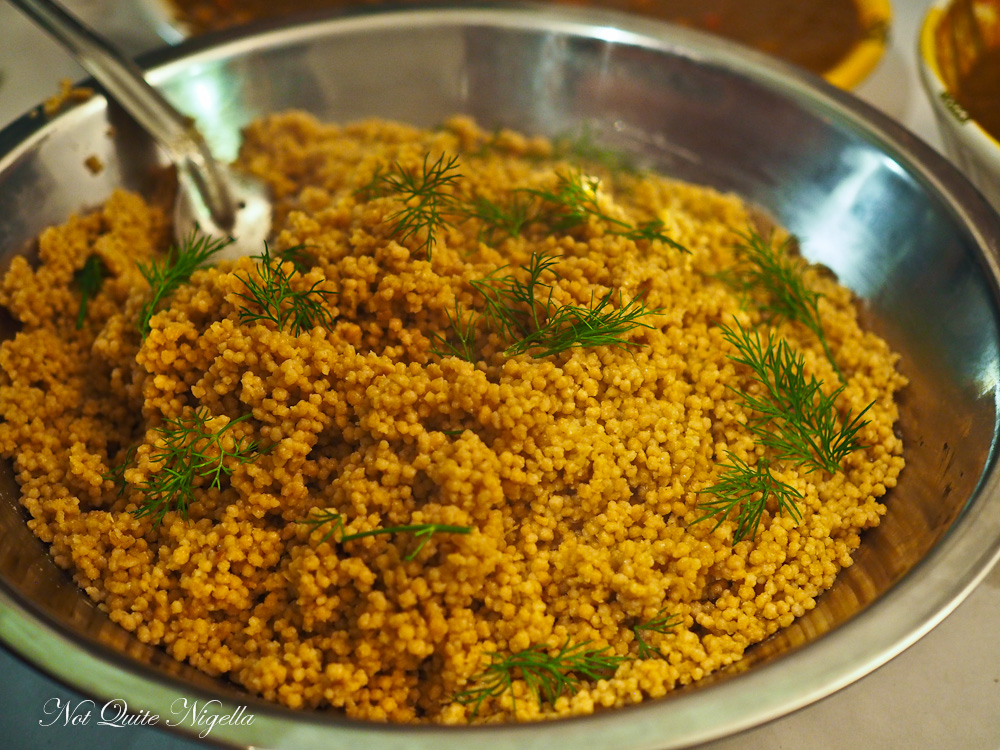 Laila now lives with her husband and three children in Maryland, Washington. She says, "It's so difficult to get back to one's home but thank God I have a place to be, right? Versus so many people who don't or are in situations where their lives are very precarious or lack documenting. And honestly, we sort of were raised in a way that Palestinians to always expect or to live with precariousness that any moment something could happen." 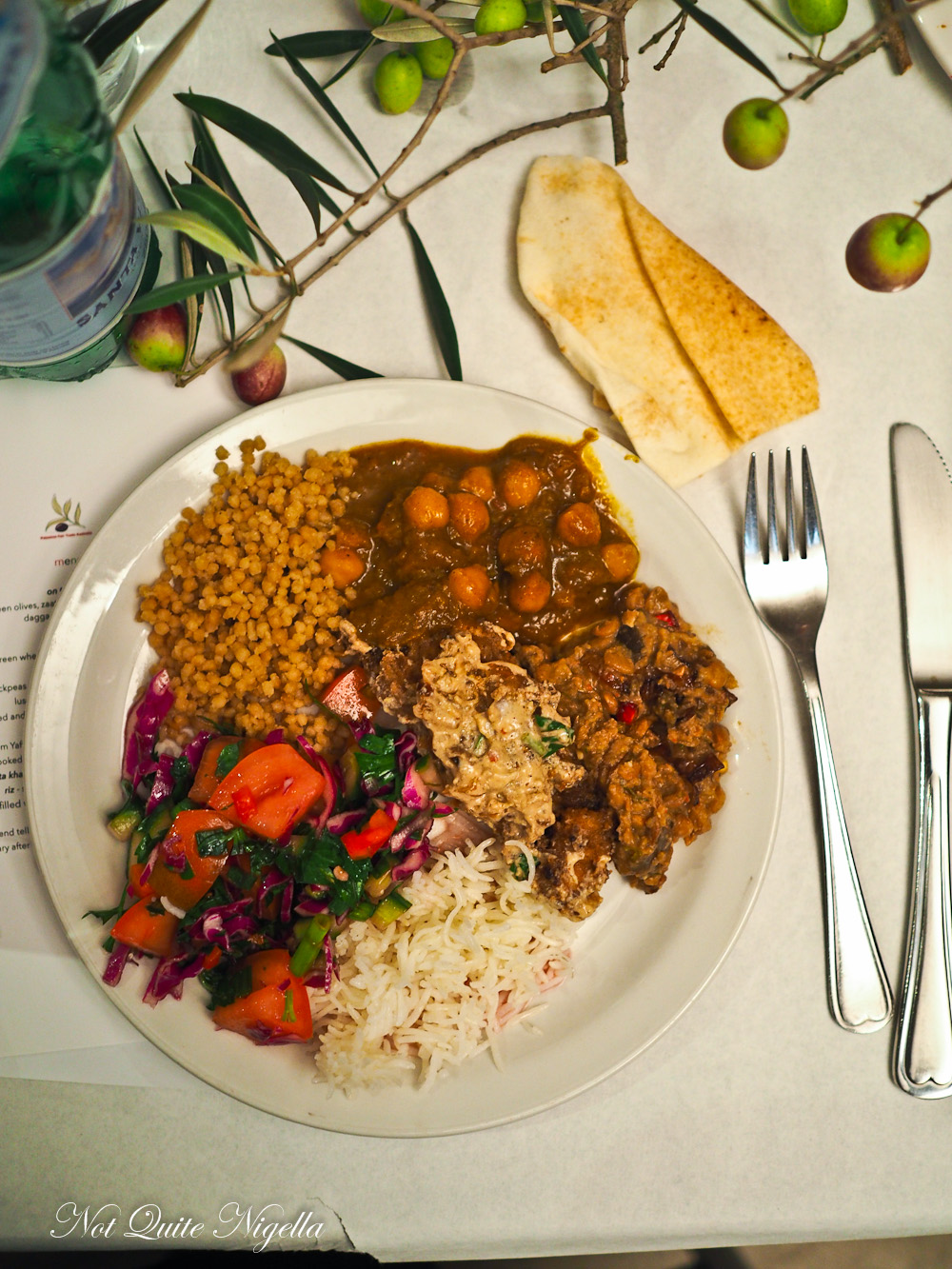 "Really, I take my cue from all the farmers, and the women, and the men that despite everything, continue to insist on celebrating life, and feeding their families, and planting their olive trees, no matter how many times they've been defruited or demolished, and do so gracefully and with a smile. You can see all these pictures because that's the only option they have," says Laila.

"Sometimes I say, you know what, educate yourself, even if it's in the context of food or this book. I sometimes say read, eat, think, act, repeat. Once you've educated yourself, have a conversation with someone who maybe doesn't know as much, even if it's over a meal or whatever. I feel like empowered with that knowledge, we can make more intelligent choices, be it who we vote for, or how we lobby, or whatever. I feel like we have no choice but to remain hopeful and optimistic."

So tell me Dear Reader, what did you think of Laila's words? Have you ever visited Gaza? And have you tried much Gaza cuisine? 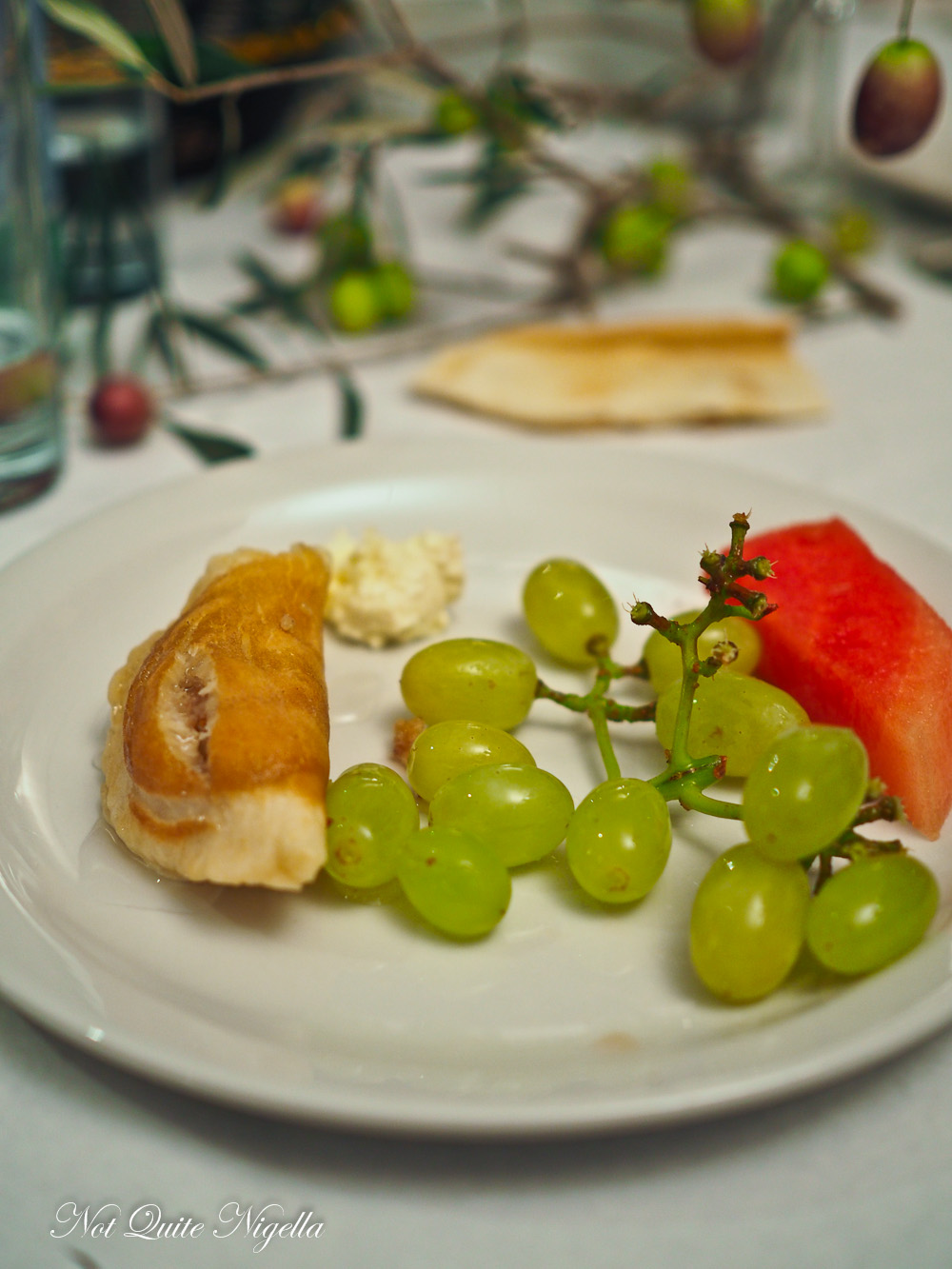 featureSix Lunches, Six People: What Do You Eat For Lunch?
restaurantThe Secrets Behind Restaurant Design. How A Restaurant's Design Can Make You Stay Longer And Spend More
featureThe Prison Dairies, Emu Plains
feature21 Fascinating Tips on Etiquette From A Royal Butler {That You May Be Doing Wrong!}
featureSo You Want To Be a Food Judge? Secrets & Lessons From A Food Judge
featureAnthony Bourdain, A Tribute
featureHow Much Food Is Wasted? Behind The Scenes of Food Bank!
featureRescuing Food: A Day With OzHarvest!
featureLook at what the Postman brought me...
featureConfessions Of A Foodie