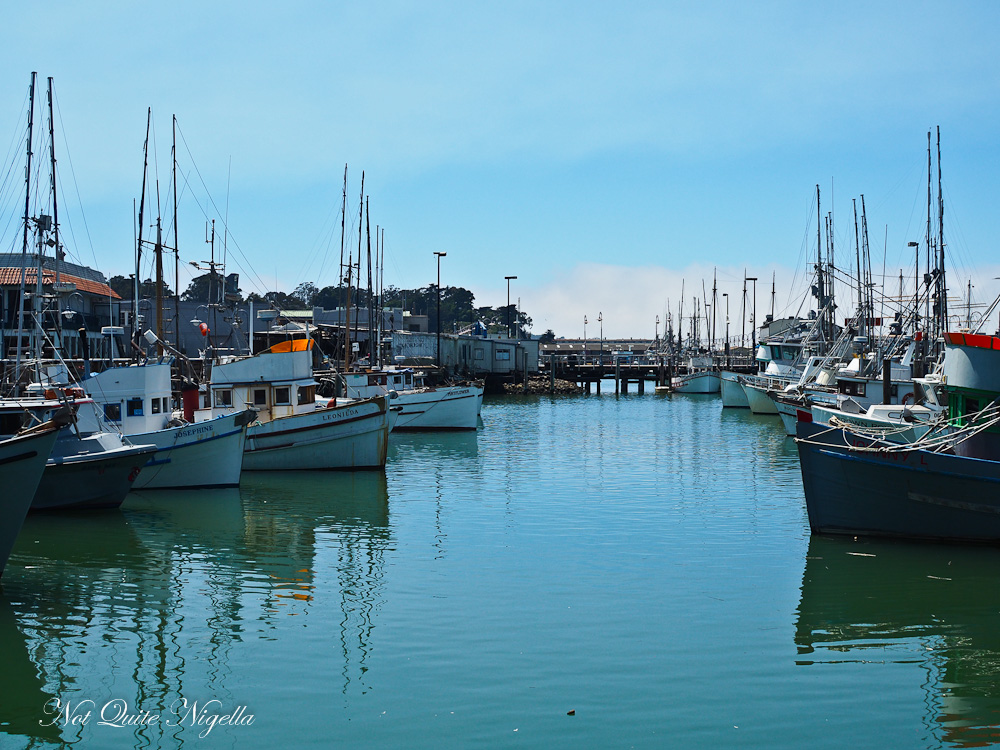 San Francisco's characteristic chilly weather has taken leave during our stay in the fair city. Instead we're greeted with sunshine and warmth. Like many we head out to the Fisherman's wharf area for a Sunday brunch at one of the city's most popular spots, Boudin Bistro and bakery where sourdough is a way of life. 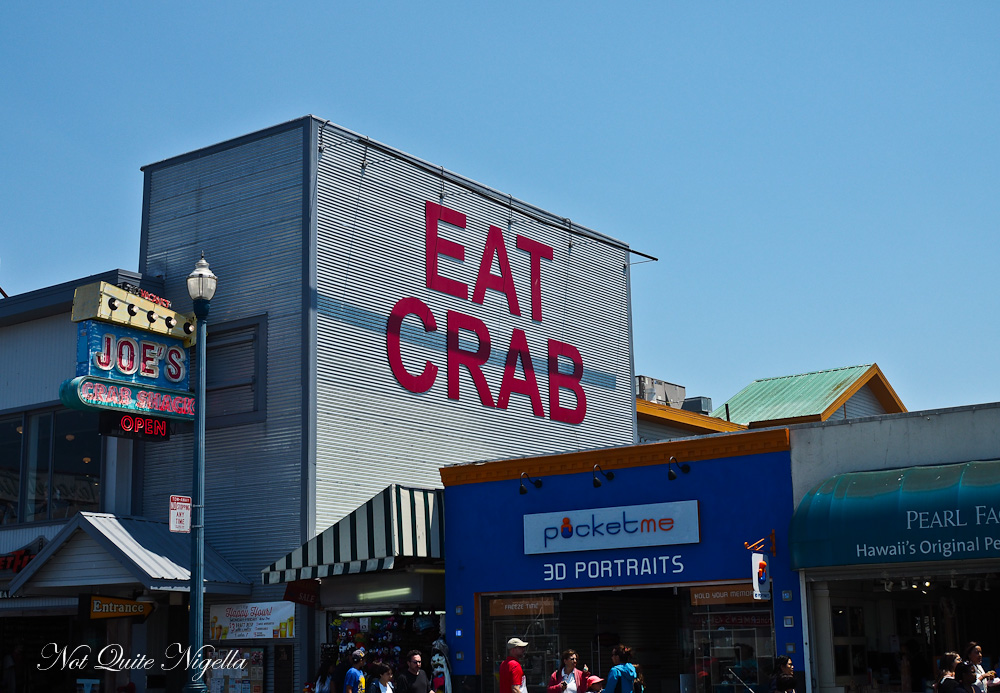 San Francisco Sourdough has a rich history. The city was seen as the gateway to sourdough in North America. During the California gold rush migrants including bakers came to live in San Francisco they brought with them sourdough techniques. 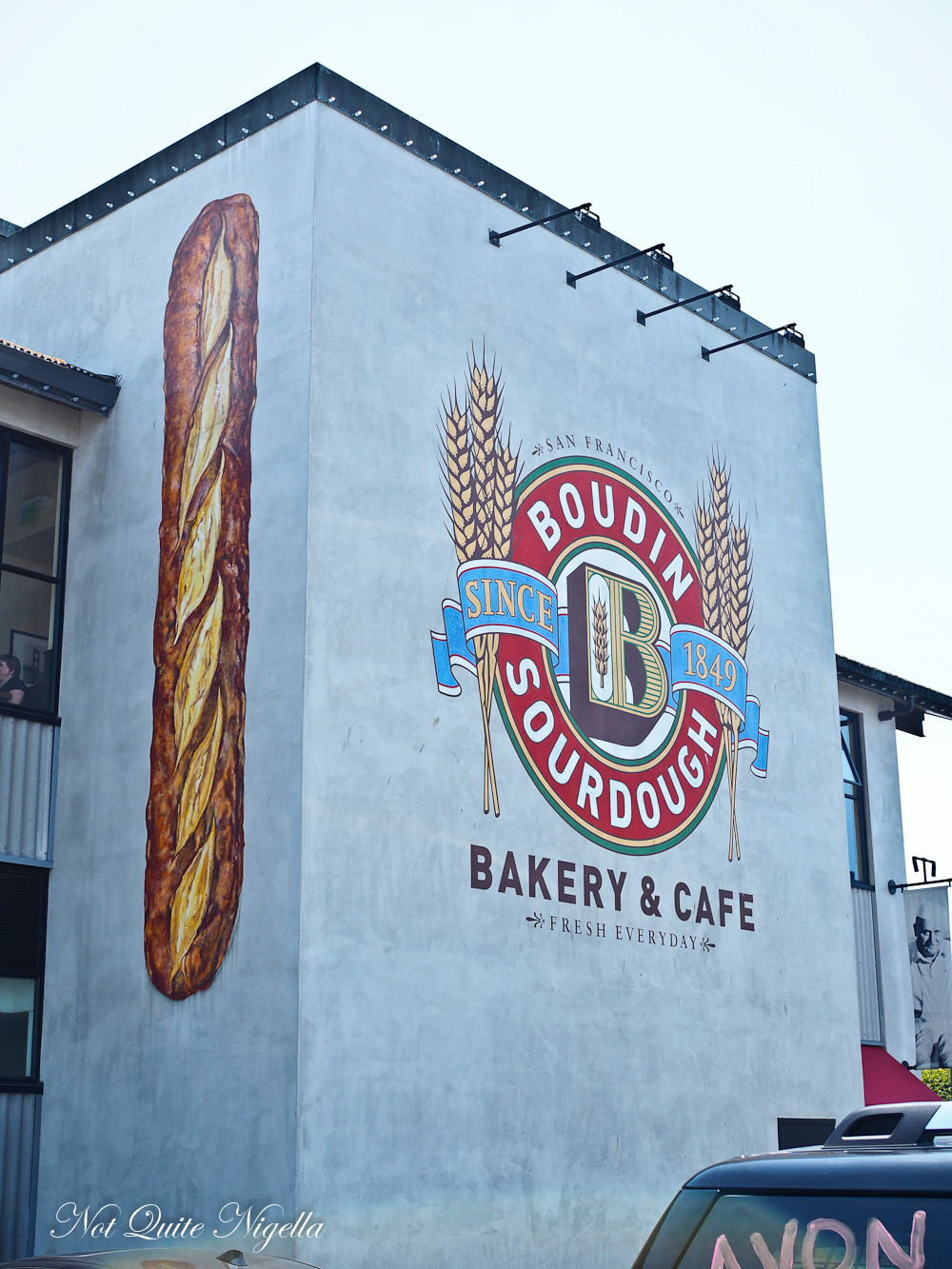 French born Isidore Boudin came to San Francisco in 1849 and established Boudin (boo-DEEN) bakery. Today the bakery is trademarked the "The Original San Francisco Sourdough™". The foggy conditions were said to be ideal for producing the sourdough with a strain of bcateria even called "L. sanfranciscensis." although today San Francisco Sourdough is successfully replicated in other areas of the country. 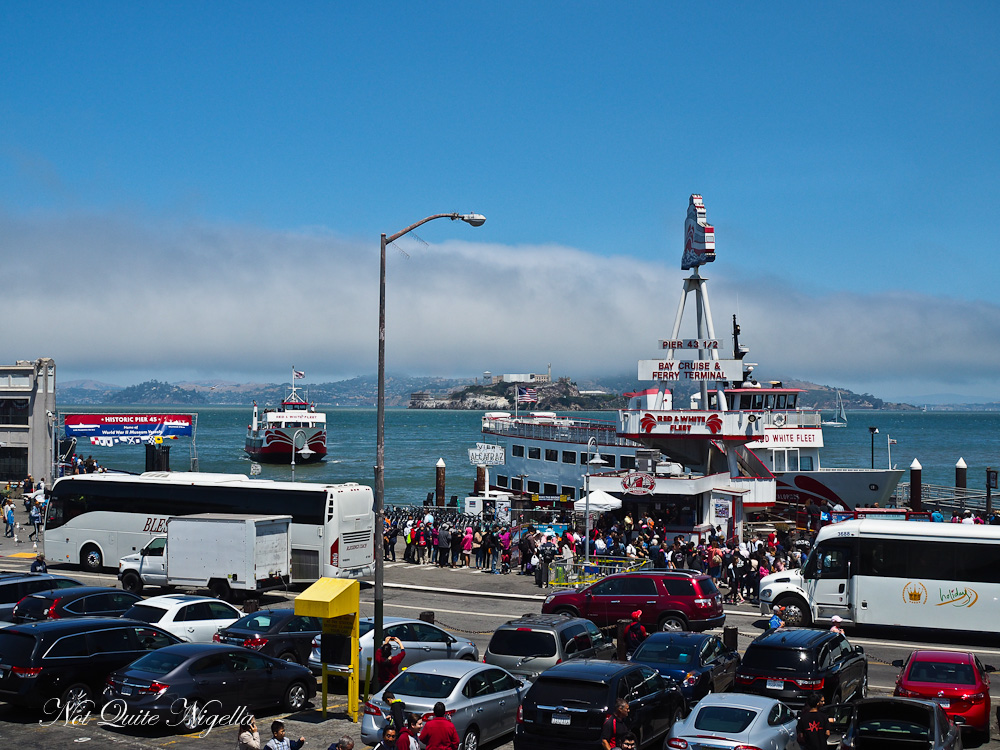 Isidore's wife Louise arrived in San Francisco in 1869 and in 1873 they married. When Isidore passed away in 1887 the business was left in her capable hands. During the 1906 San Francisco earthquake that struck in the early hours of the morning while bread was being delivered, she had the presence of mind to scoop some of the precious sourdough starter in a bucket before fleeing the burning bakery. That same starter is used in the breads today.

In 1941 Boudin bakery was bought by Steve Giraudo Sr who worked as a master baker for 60 years until his passing. Pope Jean Paul II and Bill Clinton were said to be famous fans of the bread, the latter even asking for a saxaphone shaped loaf. 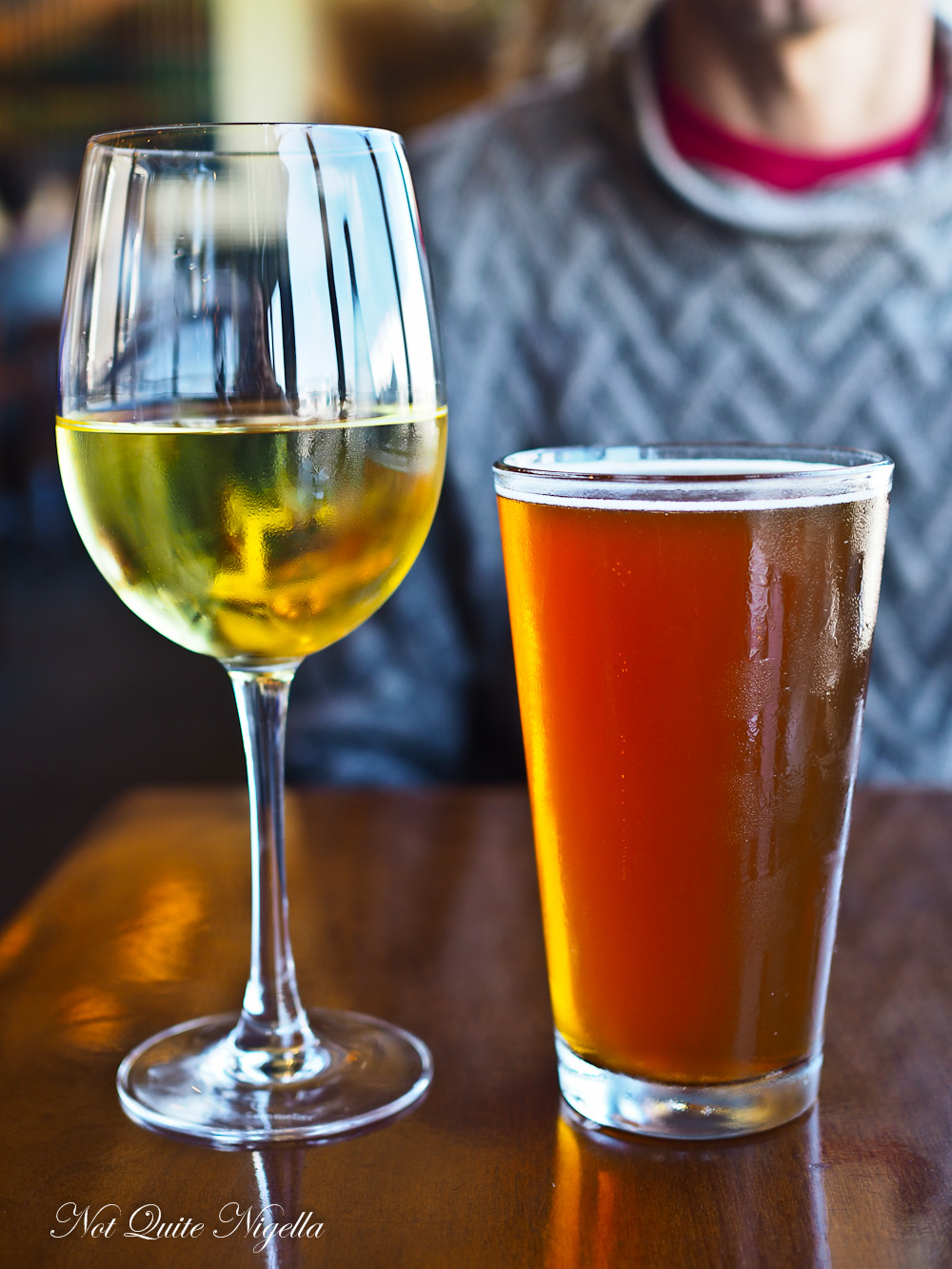 Boudin is also an ideal location to tick off many San Francisco must eats. The menu has numerous Dungeness crab dishes, Anchor Steam beer, clam chowder and of course sourdough bread. Executive chef Misael Reyes explains that the restaurant's seafood supplier is within close eyeshot and they only use fresh not frozen seafood. The menu has a great selection of Californian wines including a fabulous Virtu St Supery from the Napa Valley which I order while Mr NQN orders an Anchor Steam beer. 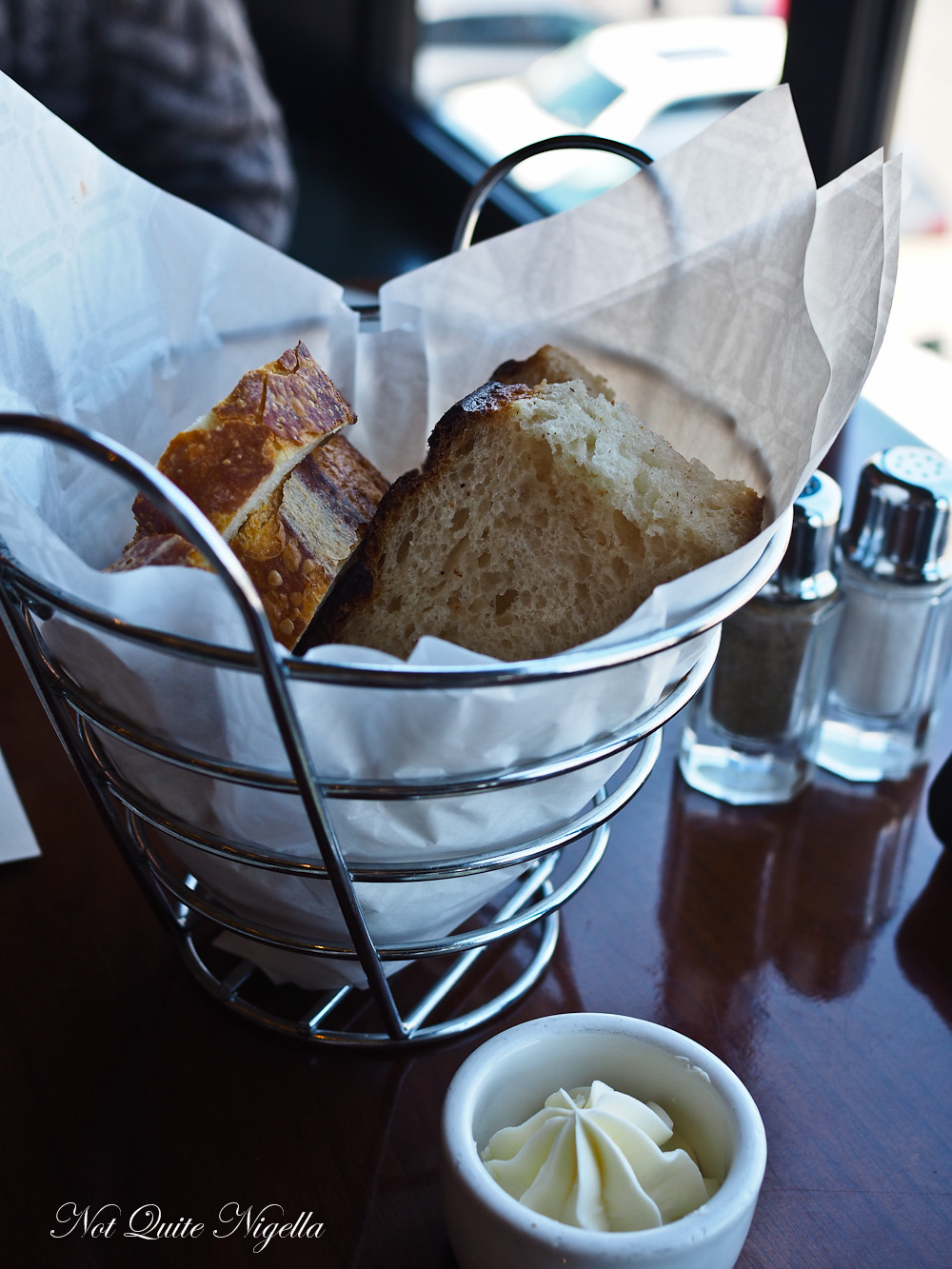 As soon as you sit down, a basket of their famous sourdough bread comes out. There are two types: a smaller loaf made in a convection oven with a thin, crispy crust and a slightly thicker crust and chewier larger loaf baked in a wood fired stone oven. They're wonderful spread with the whipped butter. 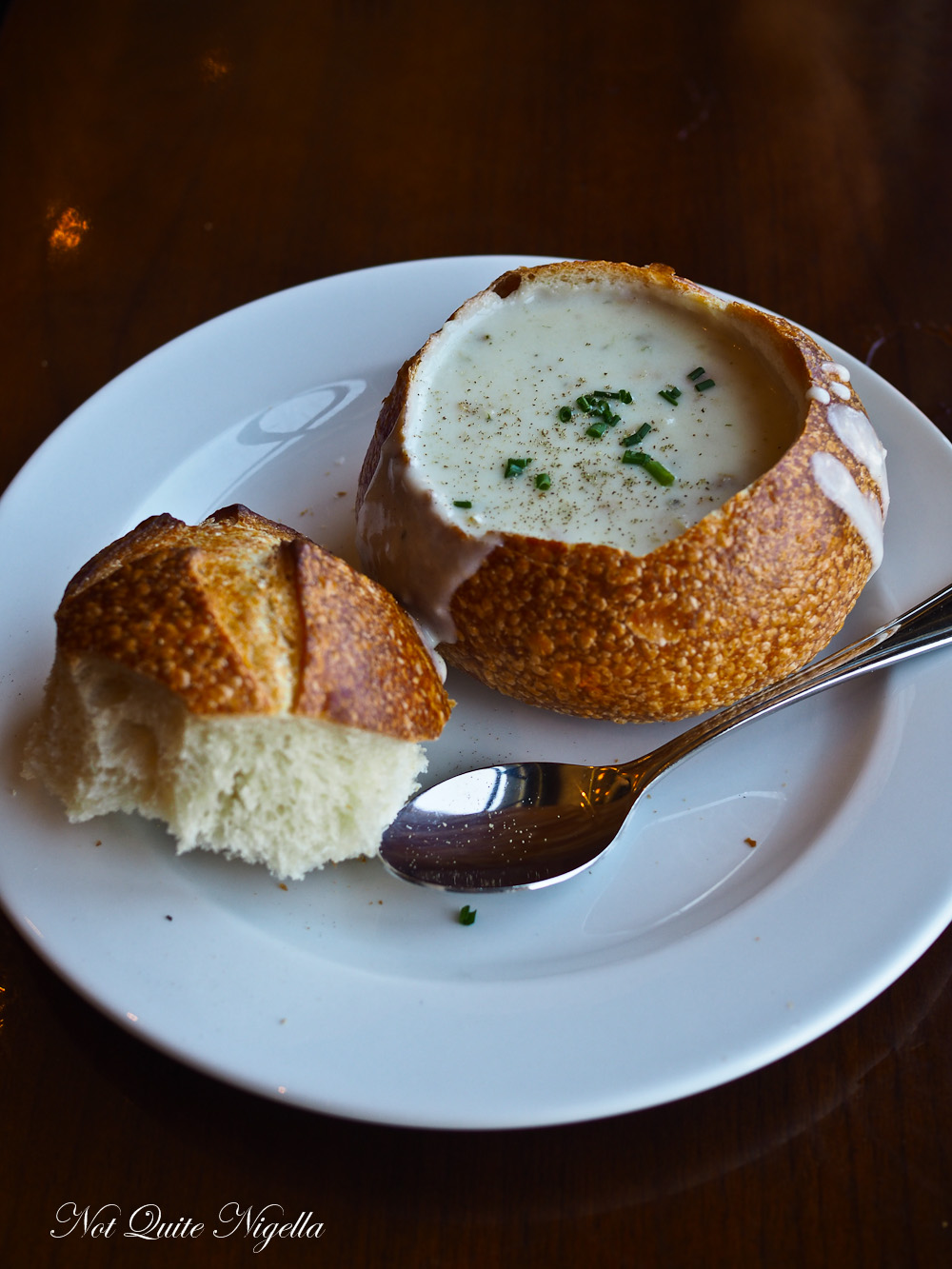 We start with their signature dish: the clam chowder served in a sourdough roll. This comes in two sizes: petite and regular. A petite serving is perfect for the both of us to share as we are having mains. It's rich and creamy with potato and plenty of tiny clams in it. The rolls are wonderfully blistered and retain a crunch on the outside. 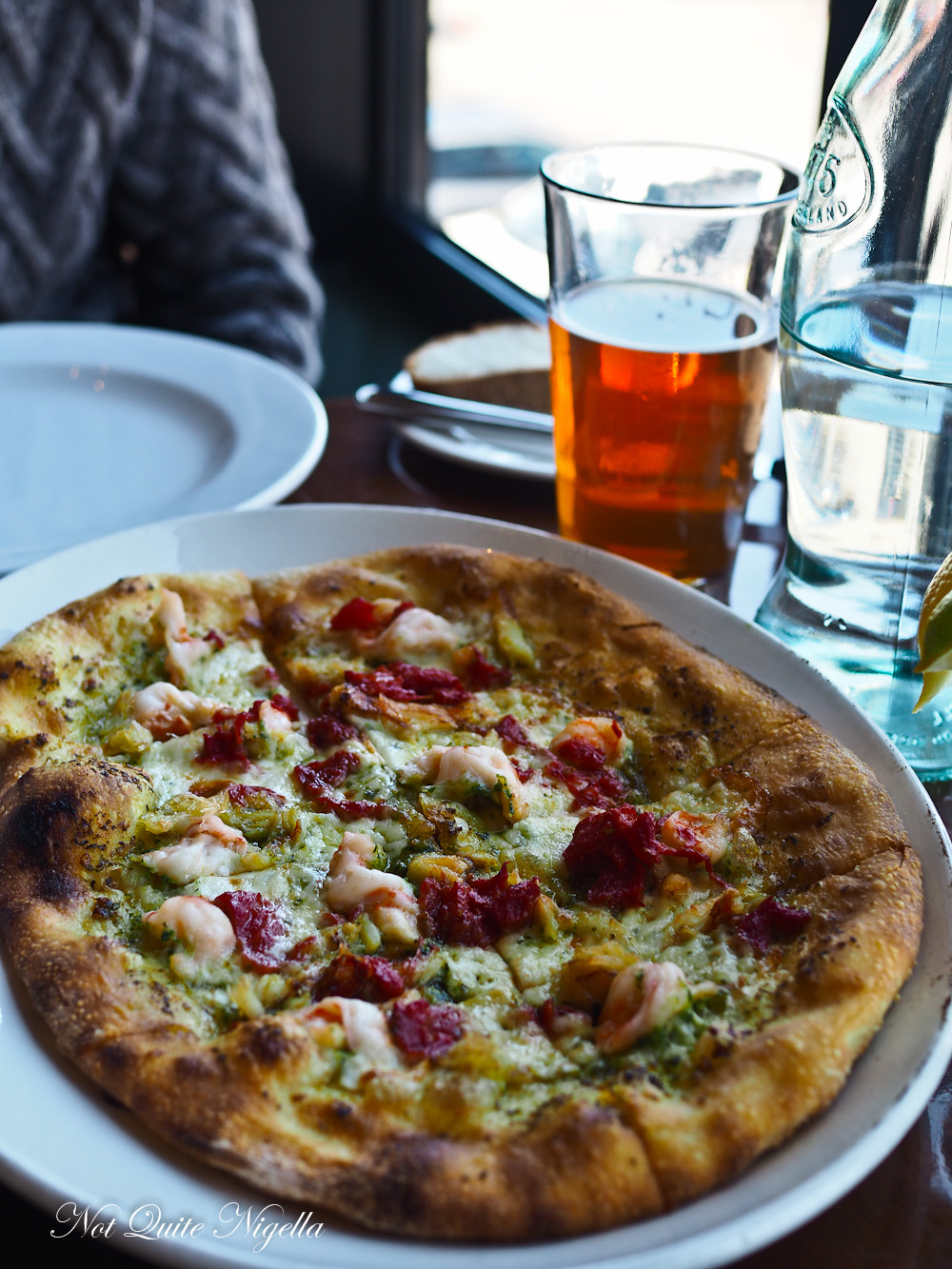 Another item that combines seafood and sourdough is the sourdough pizza. I have to admit that I don't usually order seafood pizzas but this thin crusted pizza is delicious with basil pesto, mozzarella, tomato confit, Dungeness crab meat and prawns or shrimp. 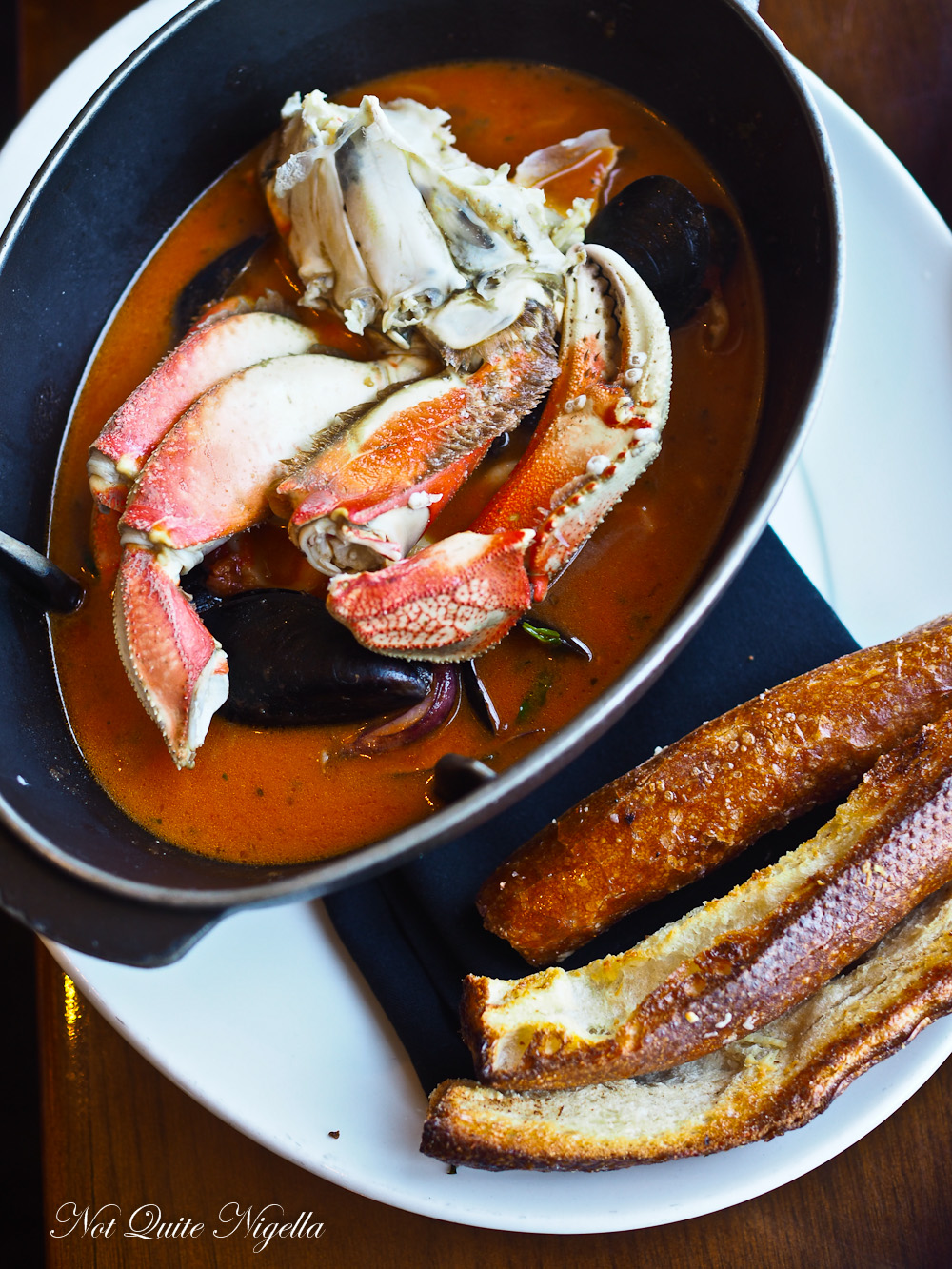 But hands down my favourite dish is the Cioppino, a seafood stew that is a cousin to Bouillabaisse but said to be invented in San Francisco in the late 1800's by the North Beach Italian fishermen from Genoa. The base is made of fennel, carrot and onion with a tomato based broth with fresh mussels, fish, prawns and Dungeness crab. At Boudin you can either ask for the crab to be picked out for you or you can do the work yourself. It comes with three toasted sourdough cheese crusts. The soup is wonderful, full of flavour with a touch of garlic. The seafood is tender, especially the crab and mussels and despite all intentions to just take a few spoonfuls, not a drop goes back to the kitchen. 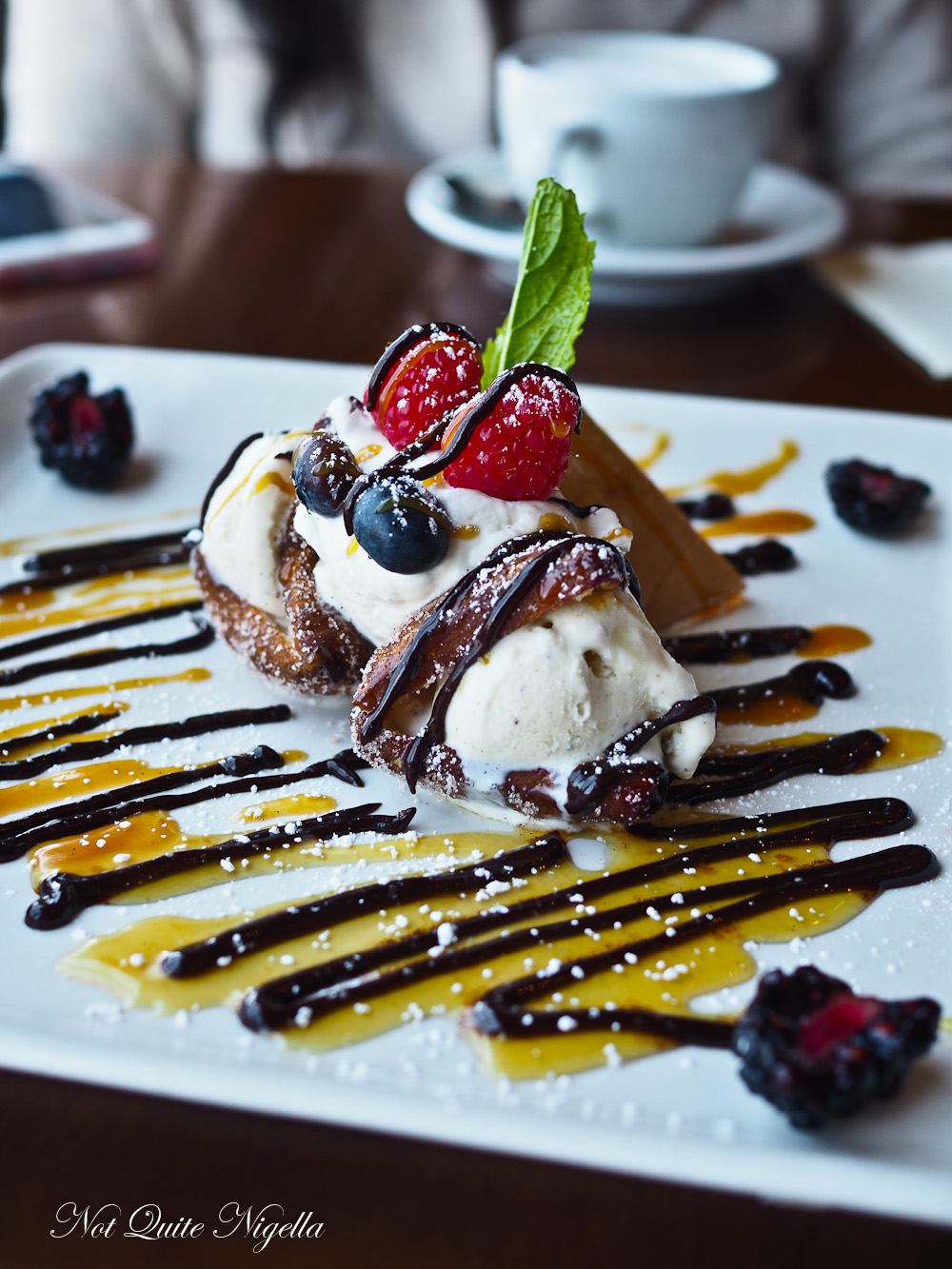 And for dessert? None other than sourdough donuts! These donuts are freshly fried, rolled in cinnamon sugar and then stuffed with vanilla gelato, topped with berries and drizzled with chocolate sauce. 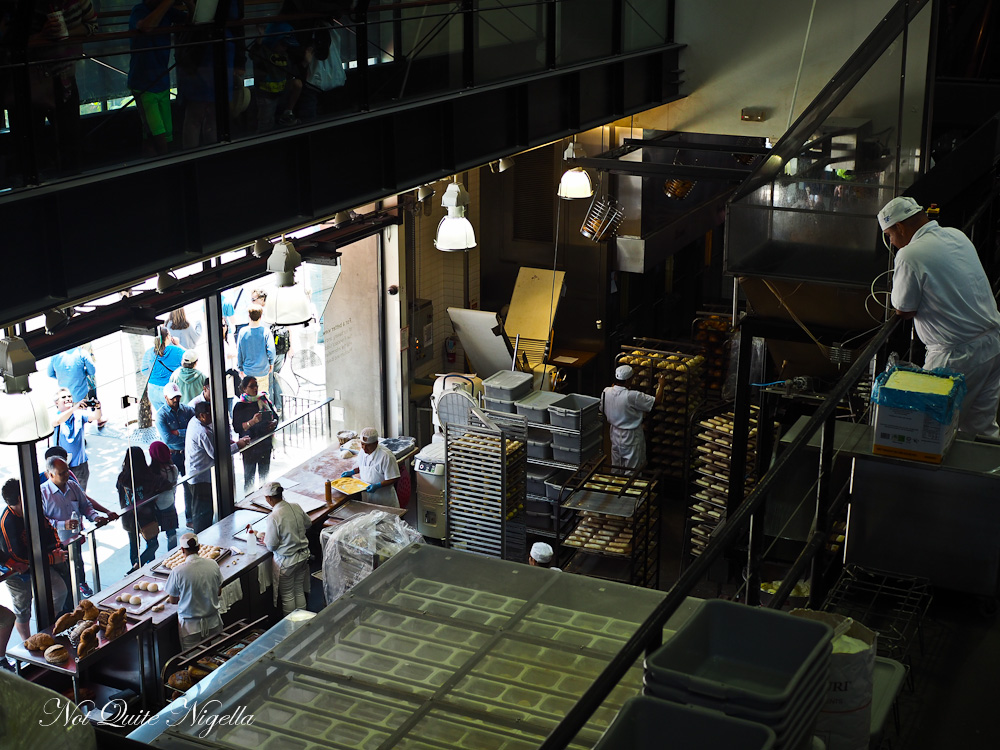 After their meal people are invited to the free bread museum to take a self guided walking tour. I am usually not much of a museum person but this was one of the most fascinating tours telling tales of some of the entrepreneurial characters during the California gold rush and the history of how sourdough came to California. 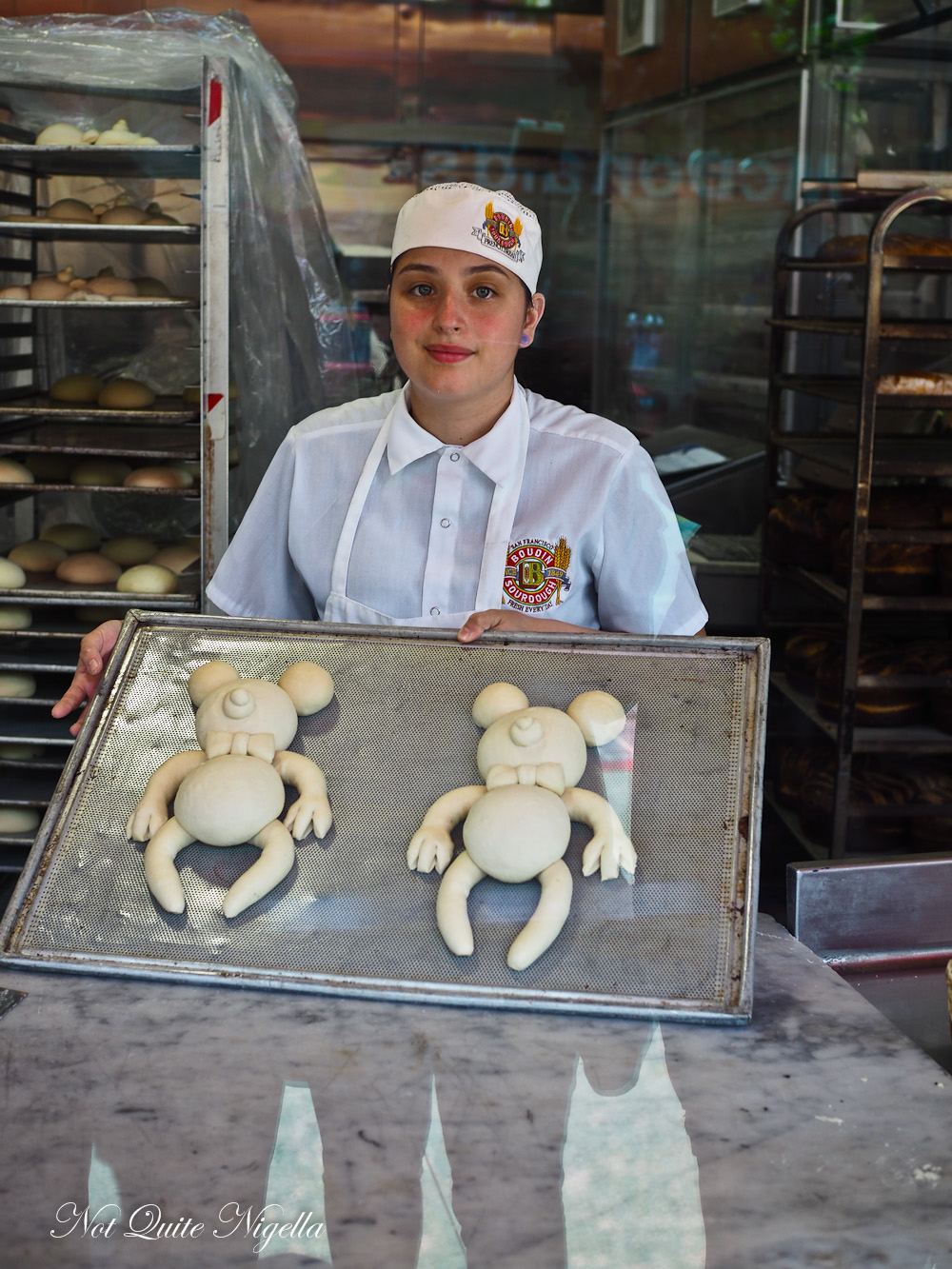 The aroma of sourdough baking in the kitchen below is also very enticing. The kitchen makes between 12,000-15,000 loaves of sourdough a day, 24 hours a day in shapes like bears and crabs. People line up outside to watch them shape the loaves and answer any questions through their mike through the glass. 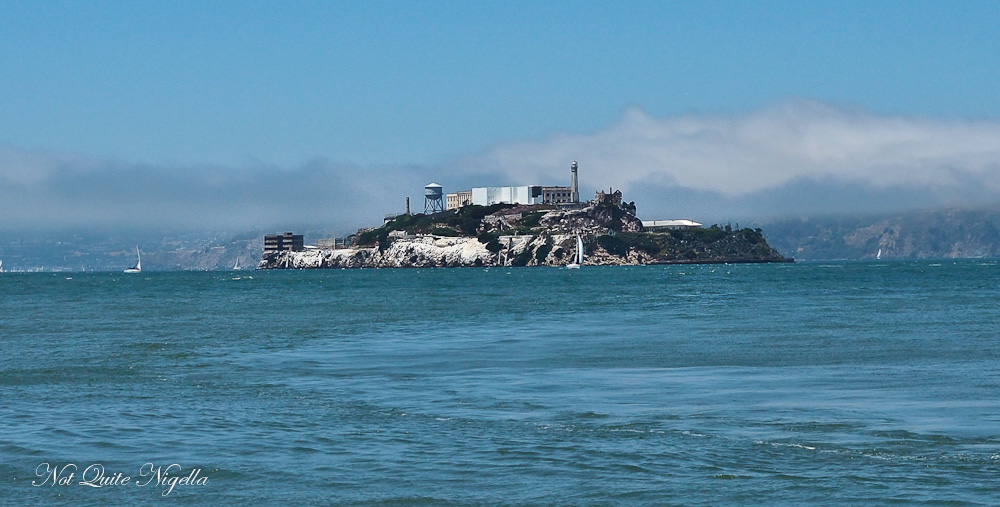 We walk along the Fisherman's wharf-most people come here to have lunch and enjoy the seaside vibe and eat seafood. It's a very touristy area (but hey we are tourists) and there are plenty of people snapping photos of Alcatraz Island in the distance. 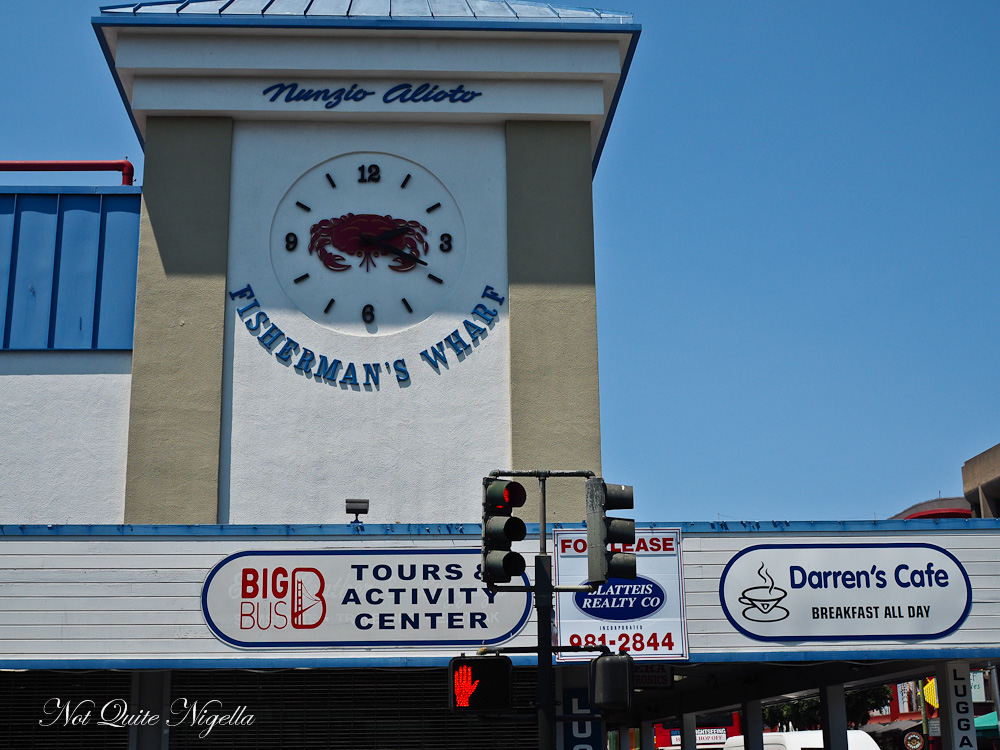 The fisherman's wharf is also a great place to try the vintage trams which then feed onto the cable cars. We caught the F train (the Harvey Milk train) to Embarcadero and then hopped onto the cable car. The cable cars in San Francisco were invented to handle the steep hills and they are very popular to ride. The Powell Hyde line takes you near one of the most popular attractions, Lombard Street which attracts thousands of tourists a day. 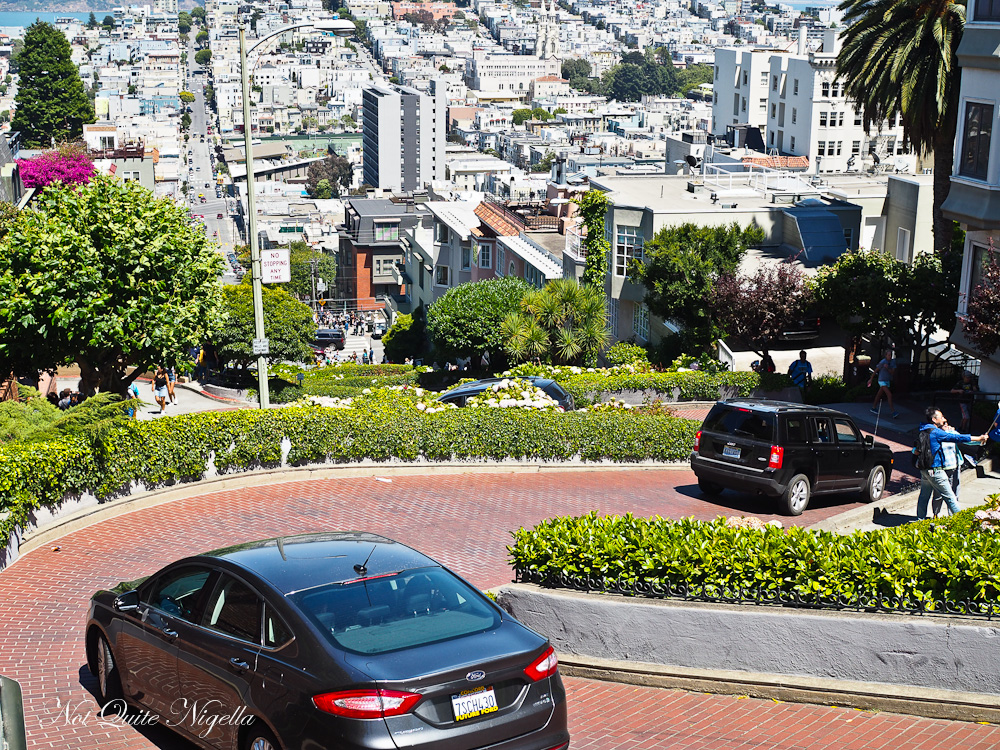 Lombard Street is known as the "crookedest" street in San Francisco. The curvy windy street has eight switchbacks or hairpin turns to enable cars to go down the very steep hill. 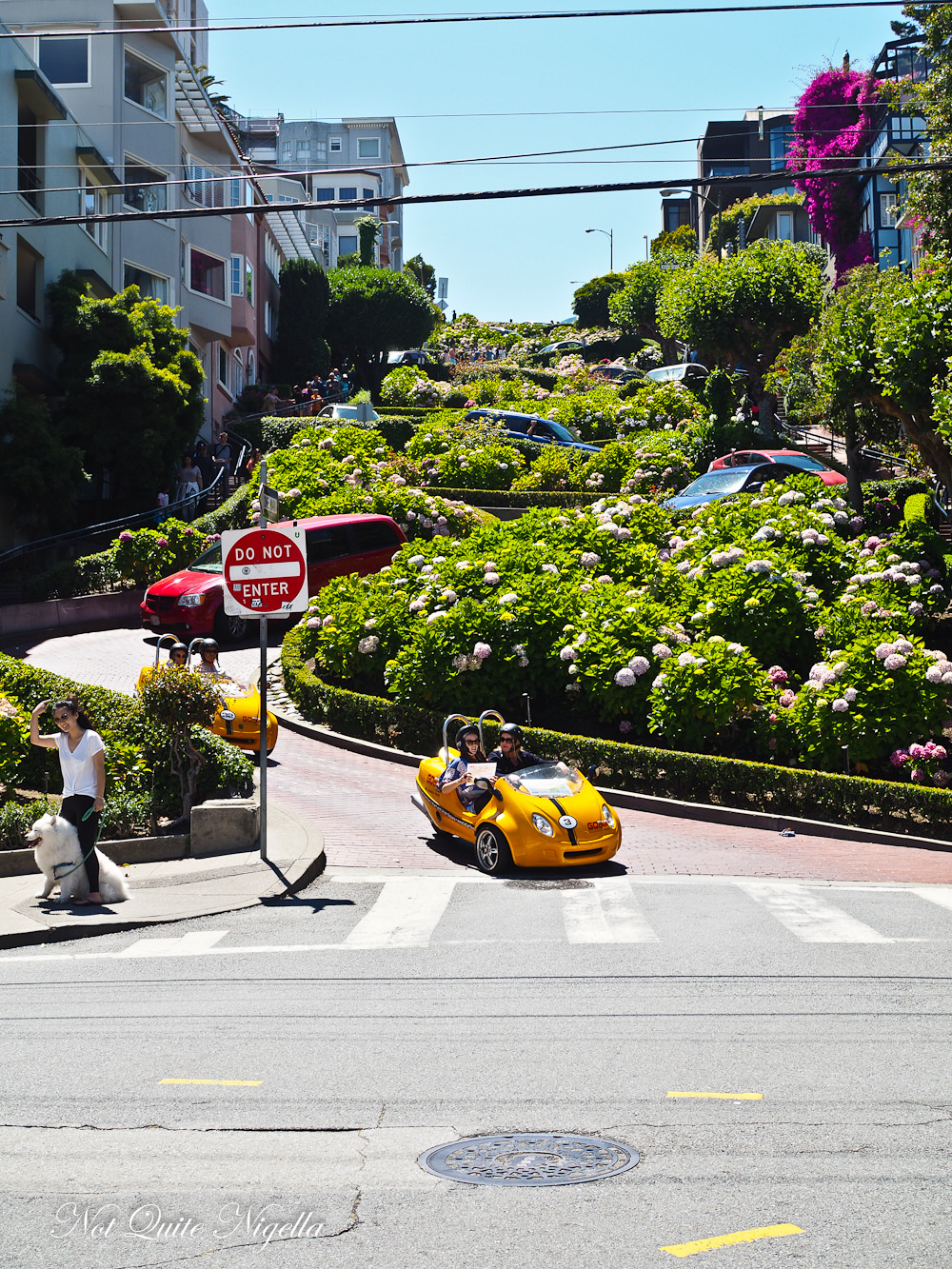 As a result countless cars drive down this street, their number challenged only by pedestrians who walk up and down this street to take photographs and appreciate the truly serpentine street. 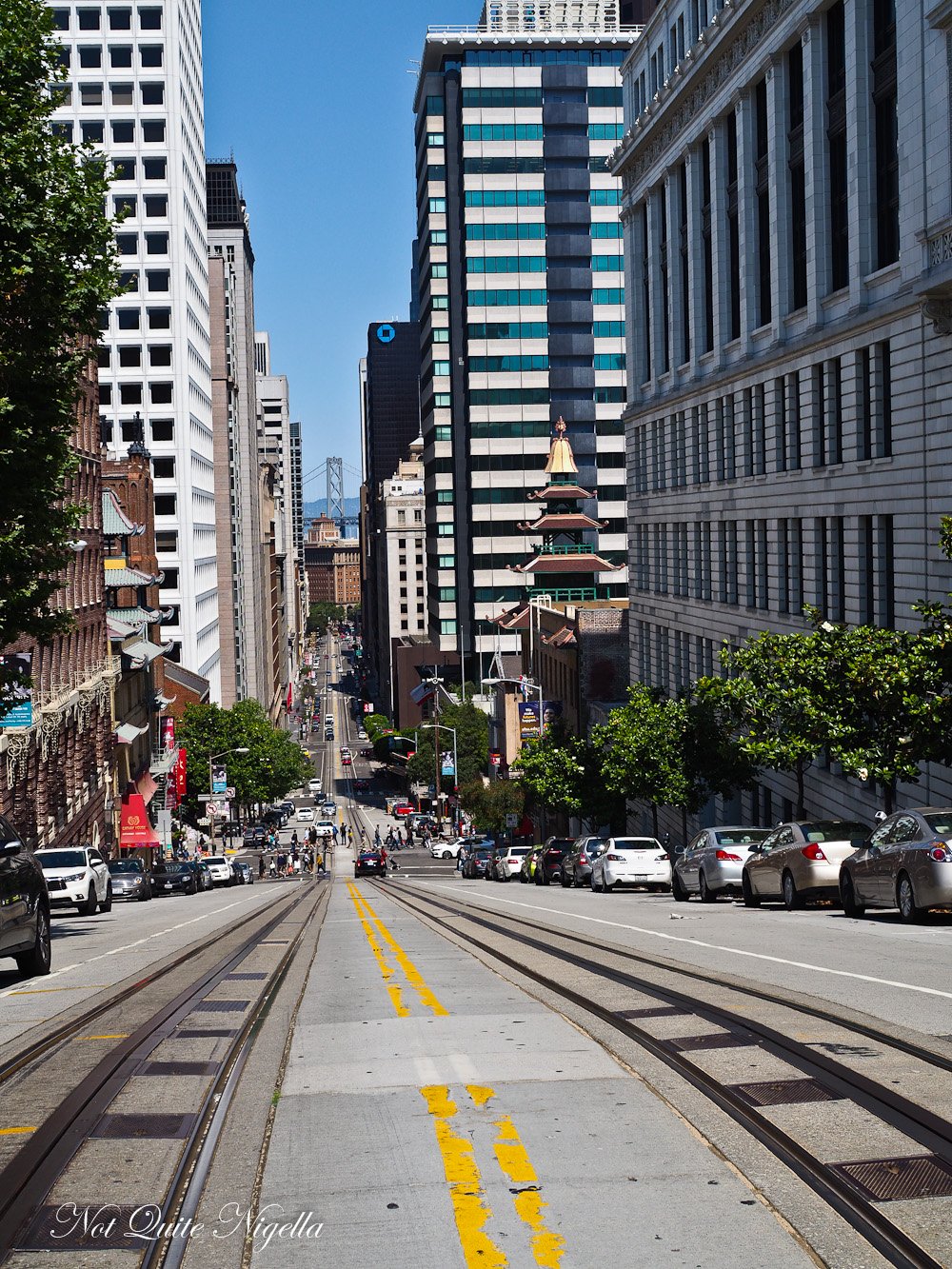 The best cable car to ride to avoid the queues that sometimes stretch for an hour is the California line that leaves from California street and goes up to Market Street. People crush on to fit and the prize spots are outside or hanging off the rails if you're brave or daring enough. 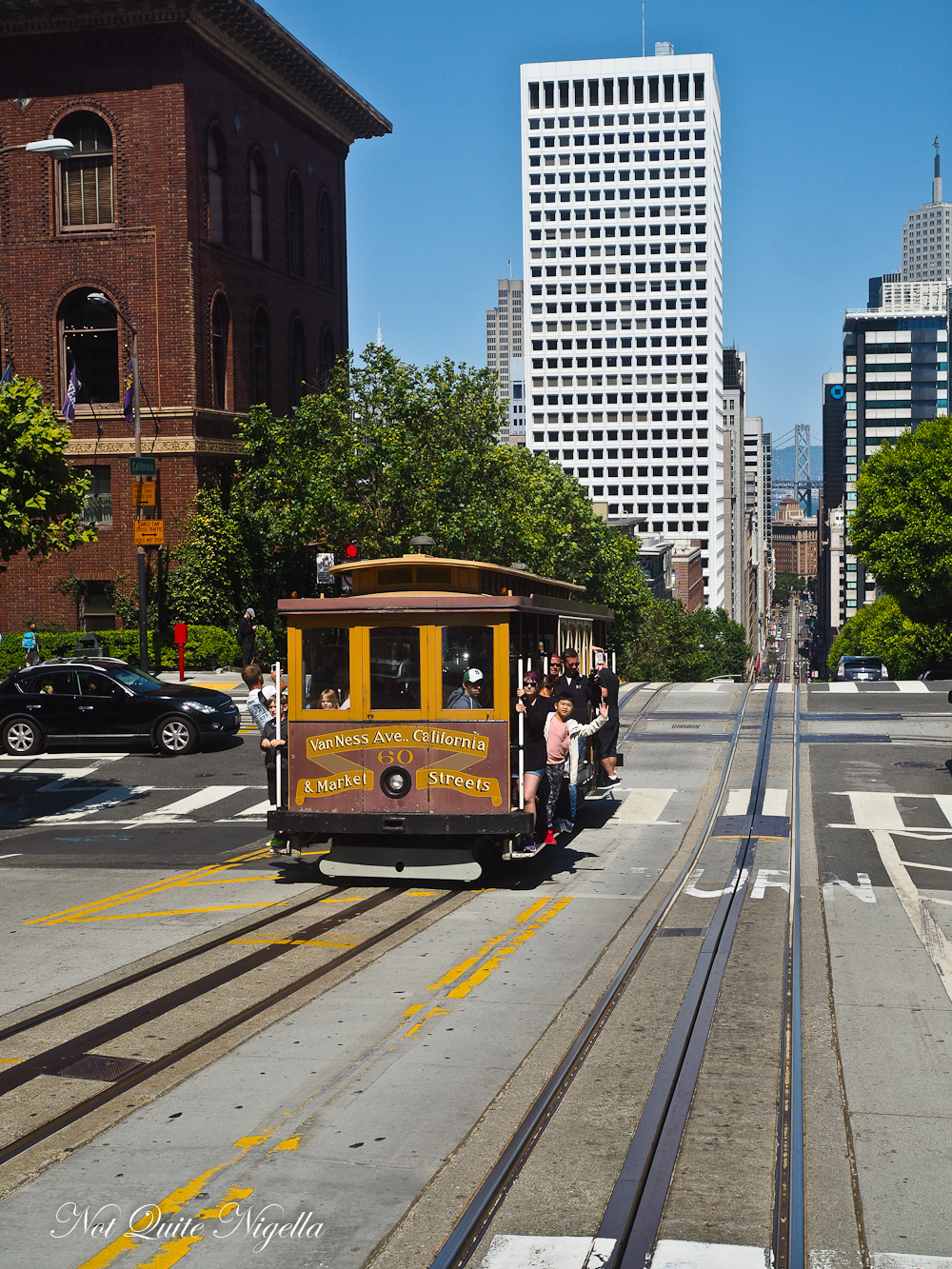 "How many people does it hold?" asks one rider. "Everybody!" says the conductor who seems to spend most of his time making sure people do not fall off the cable cars or walk into the traffic nearby.

So tell me Dear Reader, would you hang off the side of a cable car? Have you ever tried Cioppino? Do you enjoy walking through museums?

NQN and Mr NQN were guests of San Francisco Tourism but all opinions remain her own.