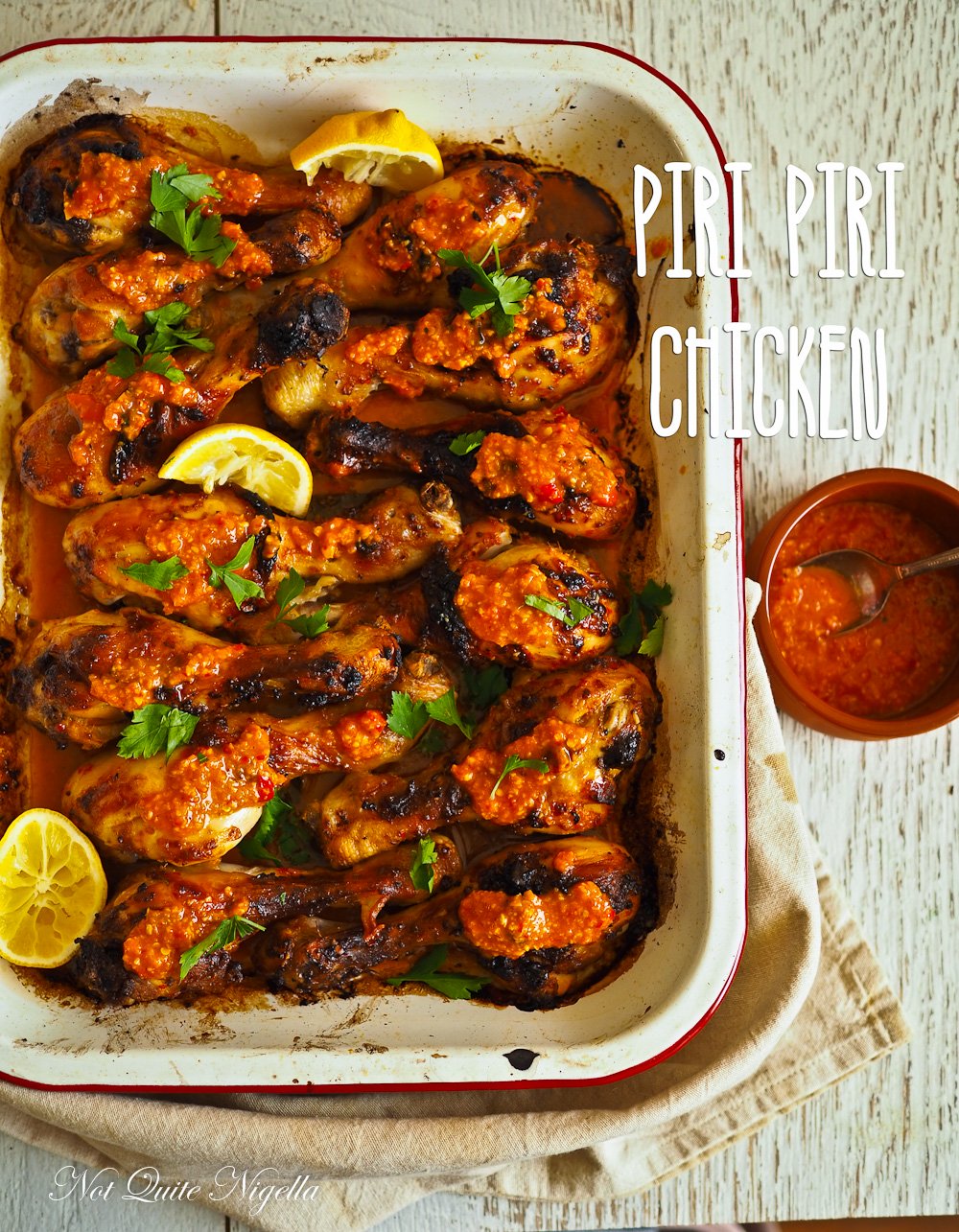 I'm going to start off saying that this Piri Piri Chicken is a pushy recipe if you want something that delivers flavour and spice in spades with very little effort. You don't need to buy Piri Piri sauce or buy the chicken at a fast food store. It's so simple to make at home. Just blend garlic, chillies, lemon, oil and smoked paprika and you've got a delicious Piri Piri sauce!

Piri Piri is Swahili for "pepper pepper" and it is named after the once wild grown African bird's eye chilli. Traditionally it's a simple dish. There's only a few ingredients needed for the most wonderful sauce while adaptions add all sorts of additional flavours but they aren't needed. When I tasted the sauce in its piquant simplicity I was amazed at how simple ingredients could turn into a powerhouse of flavour. 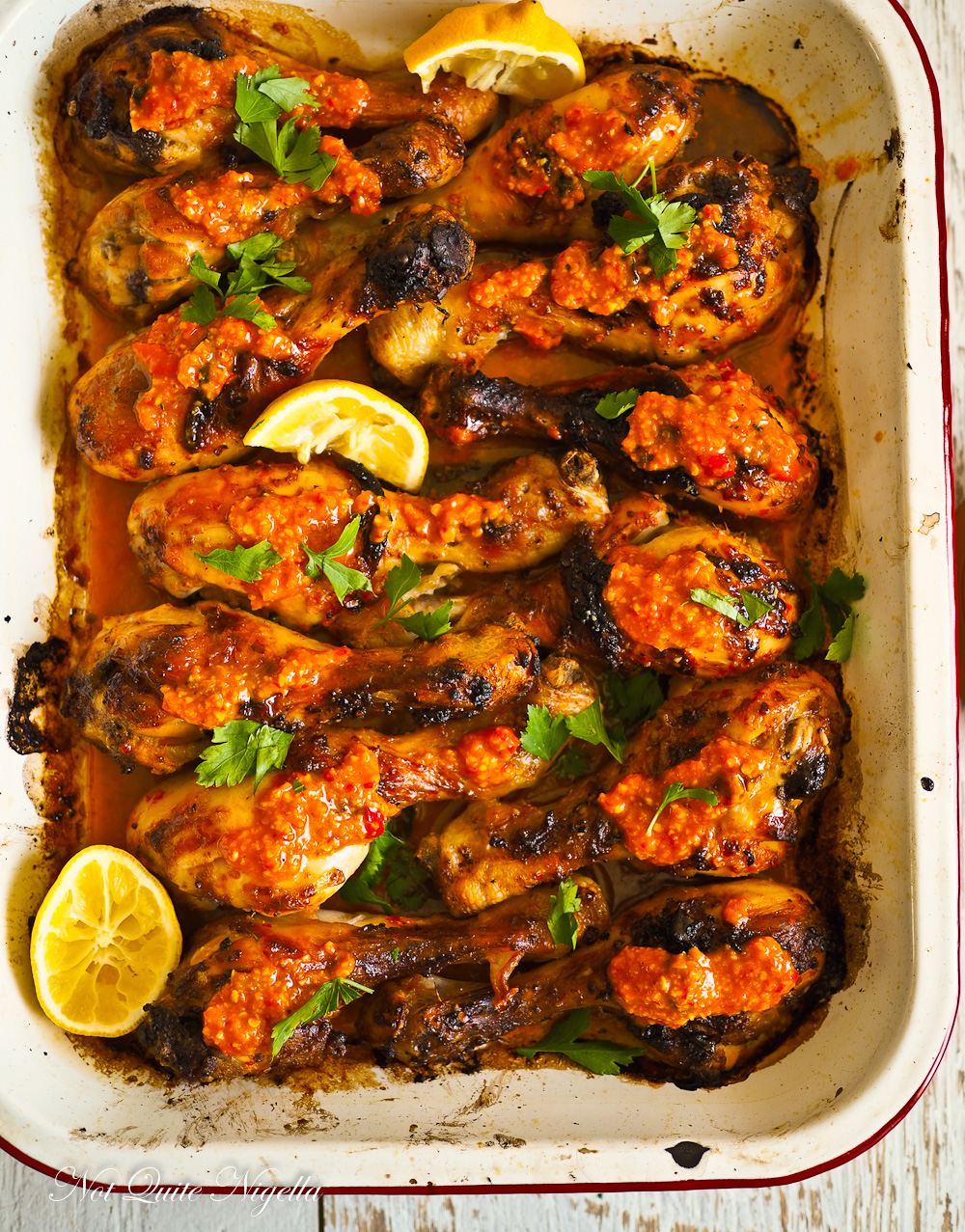 While Portuguese chicken is usually a whole chicken served butterflied, I made them as drumsticks as I was serving them at the Asylum Seekers Resource Centre (ASRC) for lunch and drumsticks are much easier for people to take from the buffet table. Piri Piri chicken is usually grilled but I roasted these and then grilled them. The sauce you get after roasting these in a tray is divine especially with fried potatoes but this way you get the lovely burnished look from the grill at the end too.

The clientele changes every day, sometimes there are East Africans, sometimes Pacific Islanders, sometimes Chinese, sometimes Syrians. We try and give them something that they'll like but it can be hard to guess. Generally speaking they love meat and they love spicy. I was told that universally, no matter what country they were from, they found baked beans confusing.

Sometimes I find that I get confused easily and do the daftest things. Like the day I made these wings, I was trying to do a lot of things at once-I was talking to a friend on the phone while baking a pudding and I answered the door carrying said pudding. There was a magazine shoot the next day and 4 dishes had to be made for the ASRC. I wore one earring because I was interrupted while I was putting them on and I never got back to putting the other one on.

I finally sat down to a cup of tea around 3:30pm. My hands were dry from 3 lots of washing up and I slathered them with hand cream and then picked up my mug of hot tea. My hands were slippery with cream and as soon as I picked up the mug handle the tea tipped to its side onto my lap and on my table. Clearly trying to do too much at once doesn't always work! I took it as a sign to have to slow down. Slow down and have a piece of spicy, saucy golden chicken.

So tell me Dear Reader, do you ever try to do too many things at once? And do you take an afternoon tea break? Do you ever go out with just one earring or incomplete? 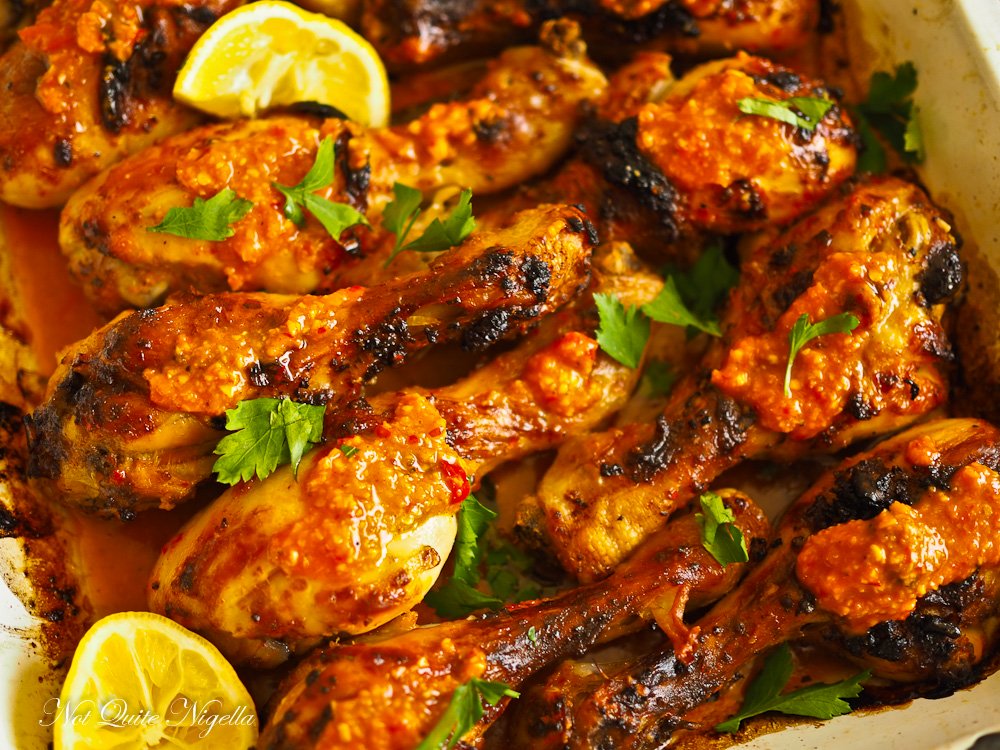 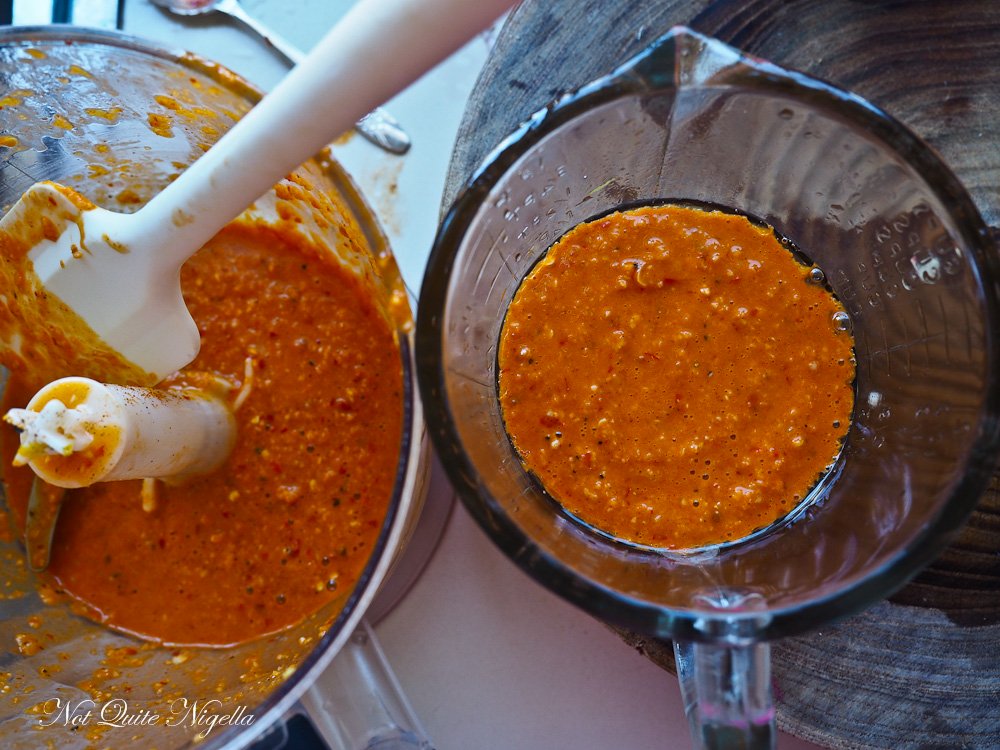 Step 1 - Place the garlic and chillies in a food processor. Grate the lemon zest and juice of the lemon and add them into the processor. Add the oil and smoked paprika and blitz until you get a smooth-ish sauce. Season with salt and pepper to taste. Divide the sauce and marinate the chicken in two thirds of the sauce (reserve the last third to serve with the chicken) with the bay leaves. Allow to marinate for 2-4 hours. I left it in the fridge overnight because chicken has to fit into my life and I wasn't going to grill chicken at 9pm when all I wanted to do was have a shower and watch Mindhunter. 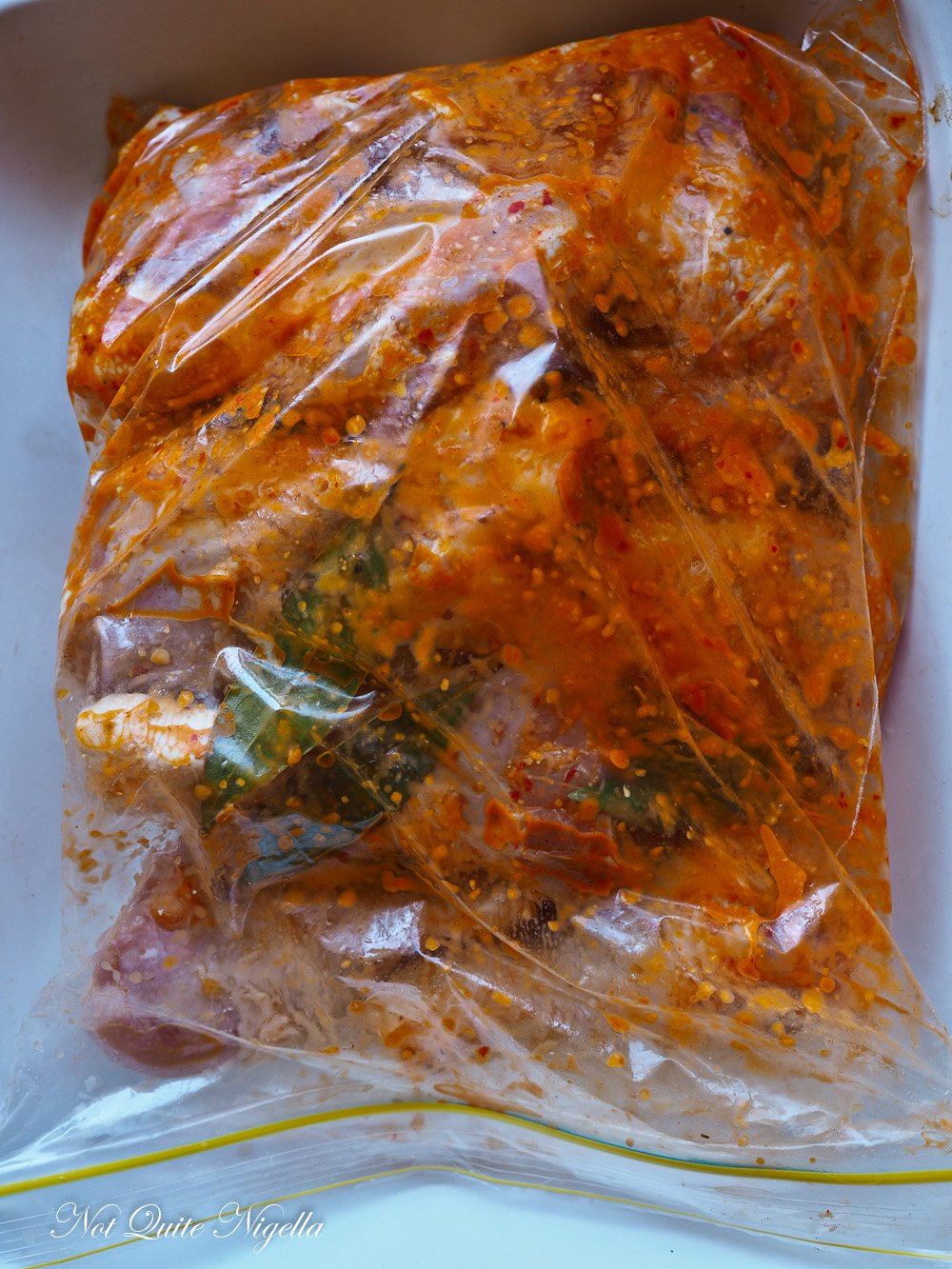 Step 2 - Preheat oven to 230C/446F. Place the drumsticks on a tray and bake for 30 minutes. Then grill under a hot grill until caramelised for 5-10 minutes. Serve with extra piri piri sauce, lemons and coriander or parsley. 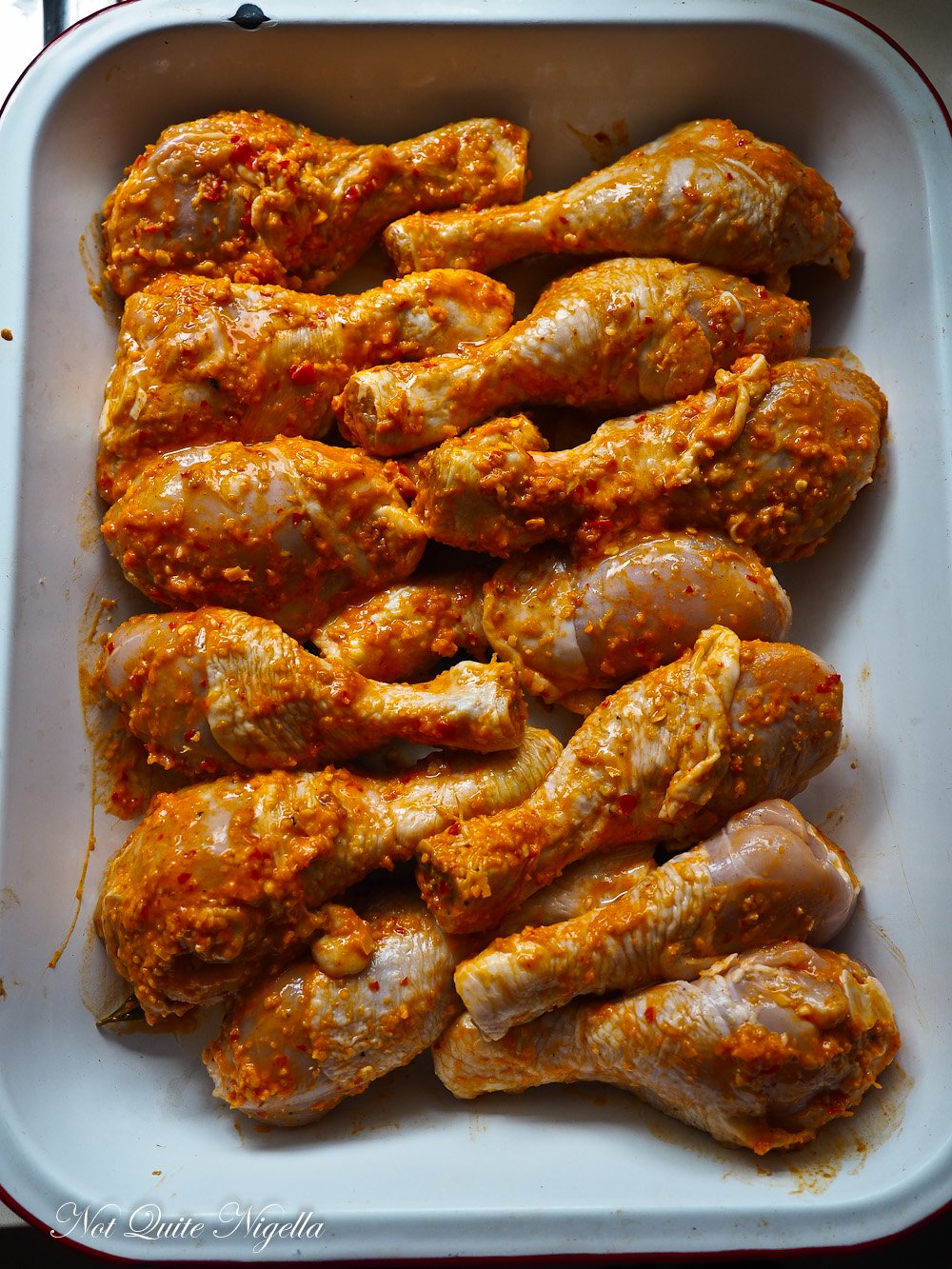