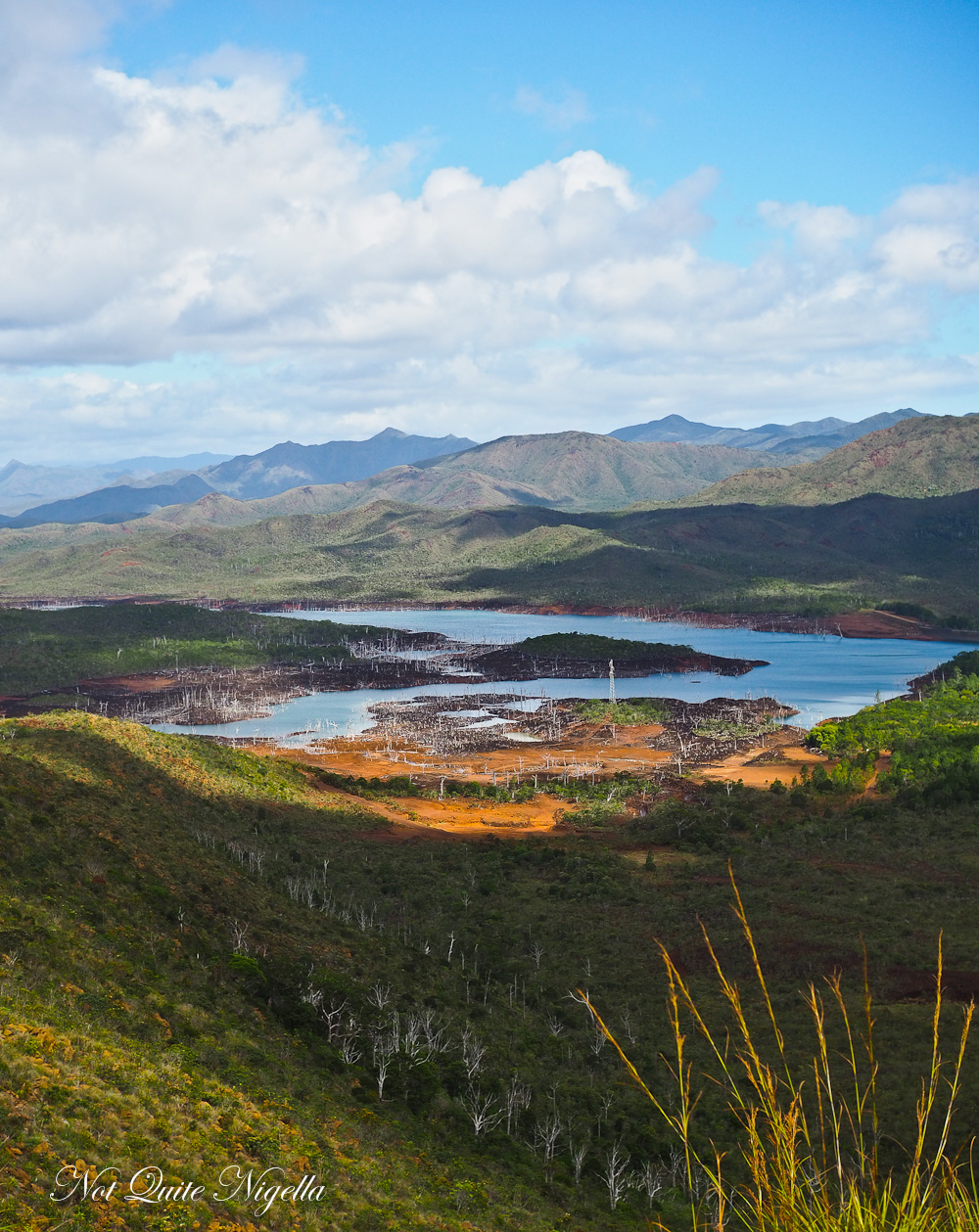 To the indigenous Kanaks of New Caledonia, the humble yam is an important vegetable. The cultivation of the yam is around which they base their calendar. The peak time to eat yams is in April which is by no coincidence a time for celebration where they can also legally eat turtles. 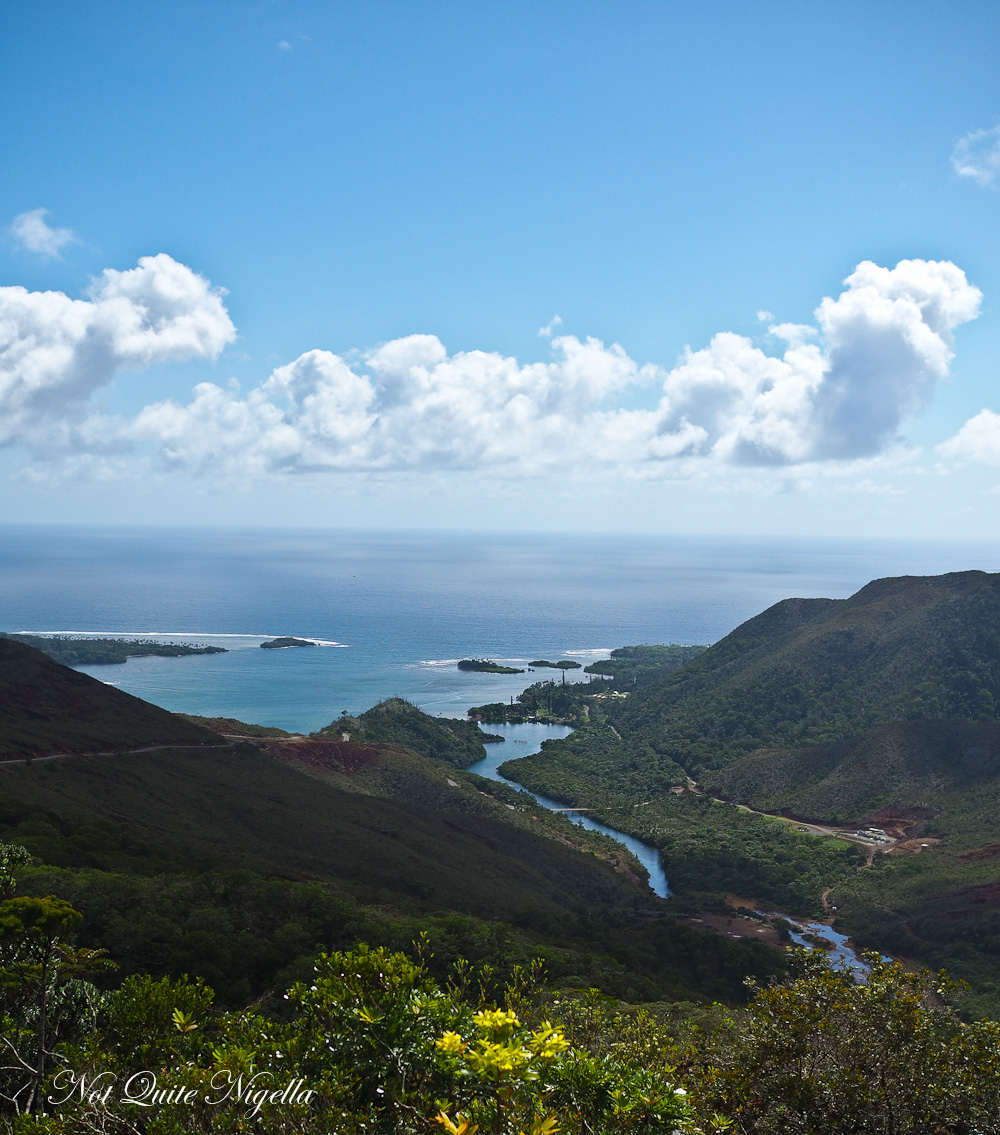 Yam is also one of the main ingredients for a bougna (pronounced boon-ya). It is a stew or a version of a Pot au Feu which is made with yams, meat (pork, quail or deer), seafood (prawns, lagoon fish), banana, sweet potato and taro. The word Bougna is derived from the Drehu word for "puhnya" which means bundle. 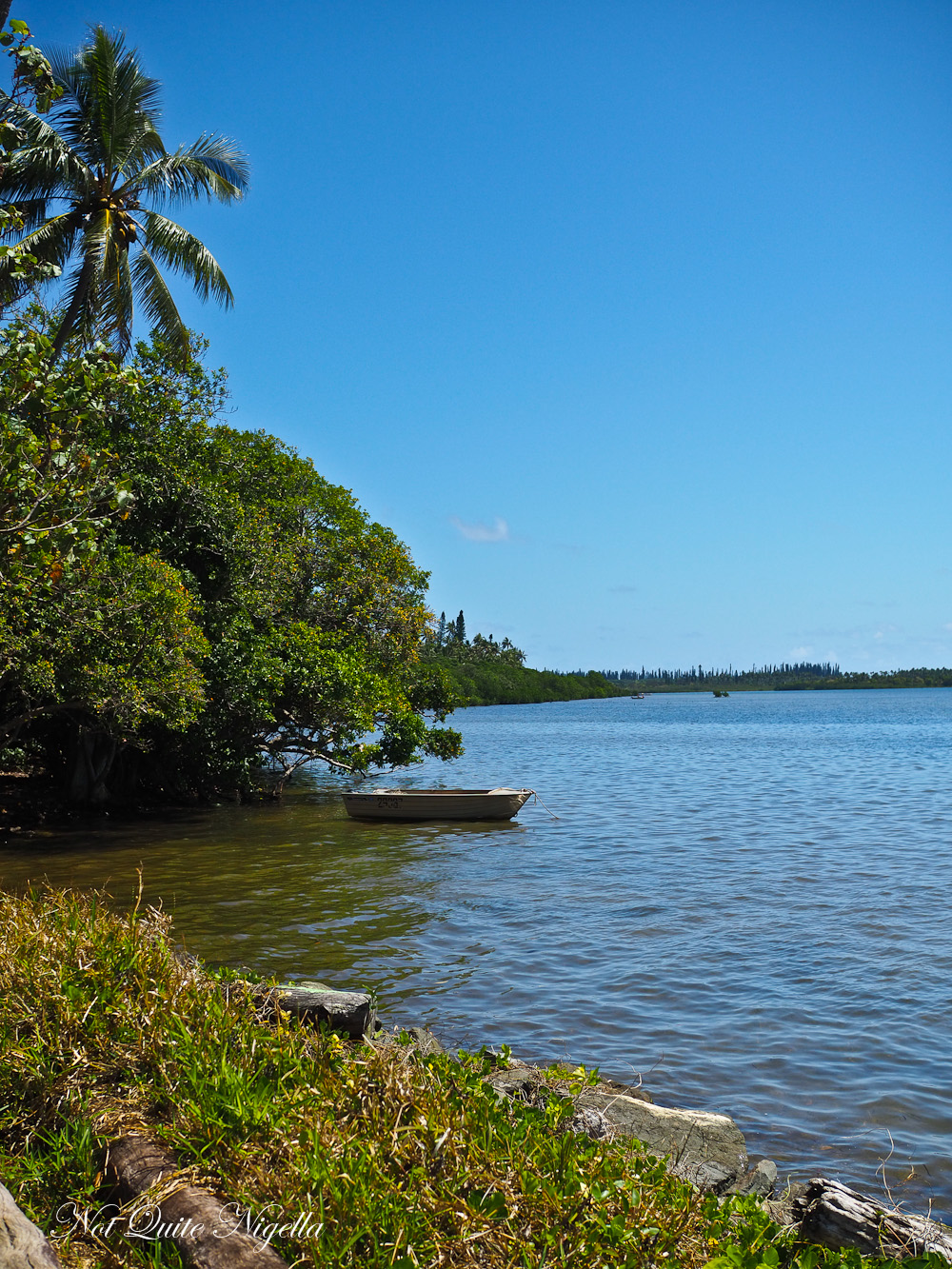 Ingredients for bougna in a Marmite (cast iron pot on right)

For our bougna, we have taken the drive south to the village of Goro, two hours south of Noumea. There are around 500 tribes in total in New Caledonia and in Goro there are 4. People here live in a community and the Goro tribe live a well established lifestyle right by the water. Some own nickel mines or work at them and there is a pretty blue and white church and a colourful and recently painted basketball court for the families. Home stays are also available here. 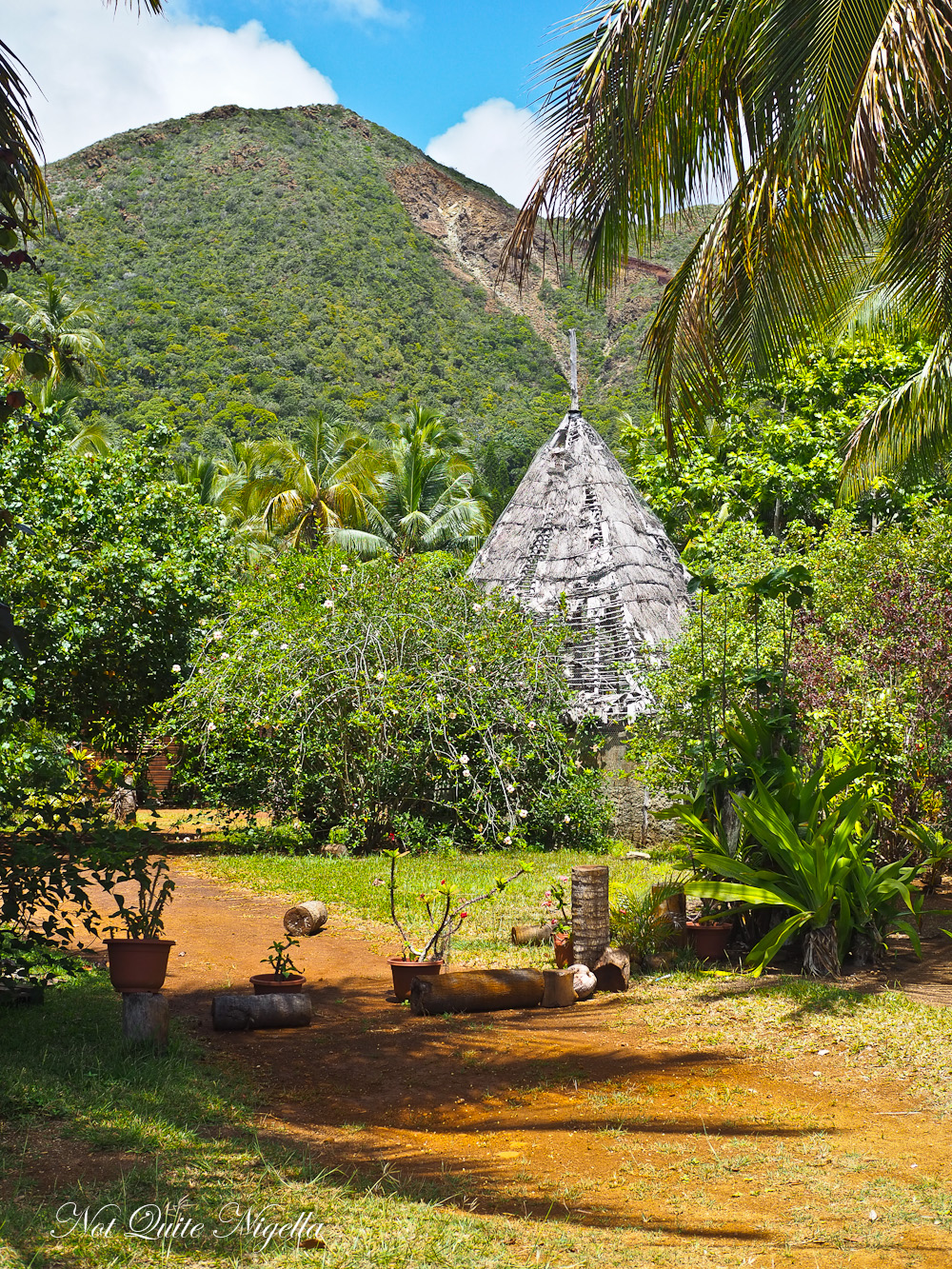 There are approximately 200 people in this tribe and property dividing lines here are not fences but more natural formations like streams or mountain crests. 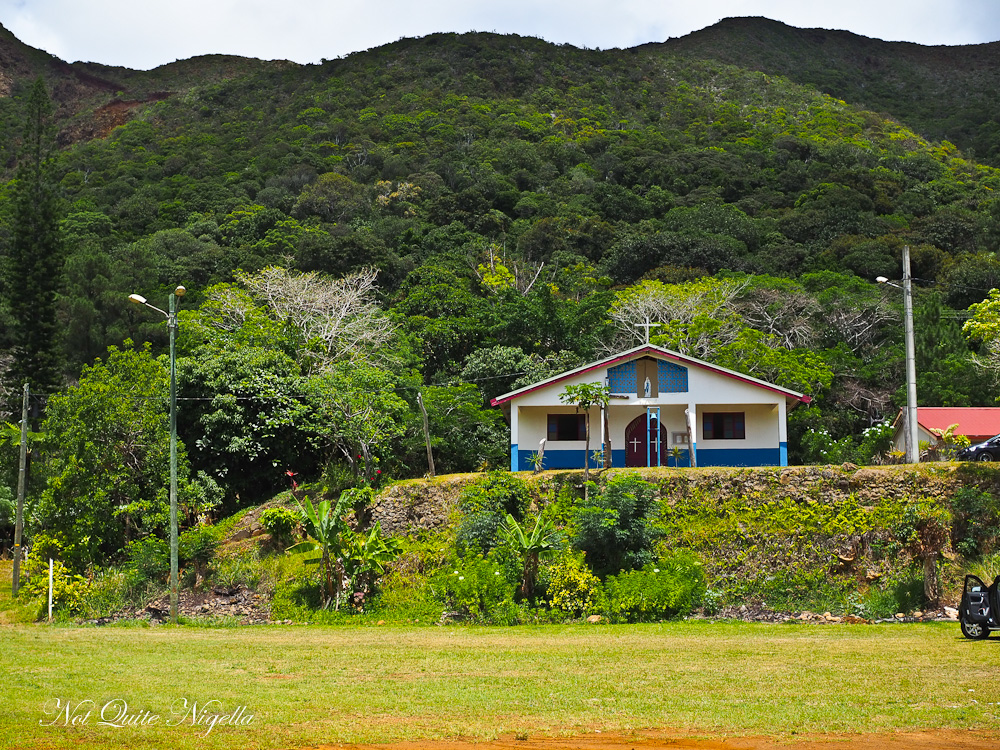 Trees laden with mangoes spill their bounty onto the road below only to be picked open by birds or crushed by cars, colouring the road a mixture of orange and red. A delicate native hibiscus flower is a study of nature in itself. It sways from a tree just slightly too high out of reach to pick. 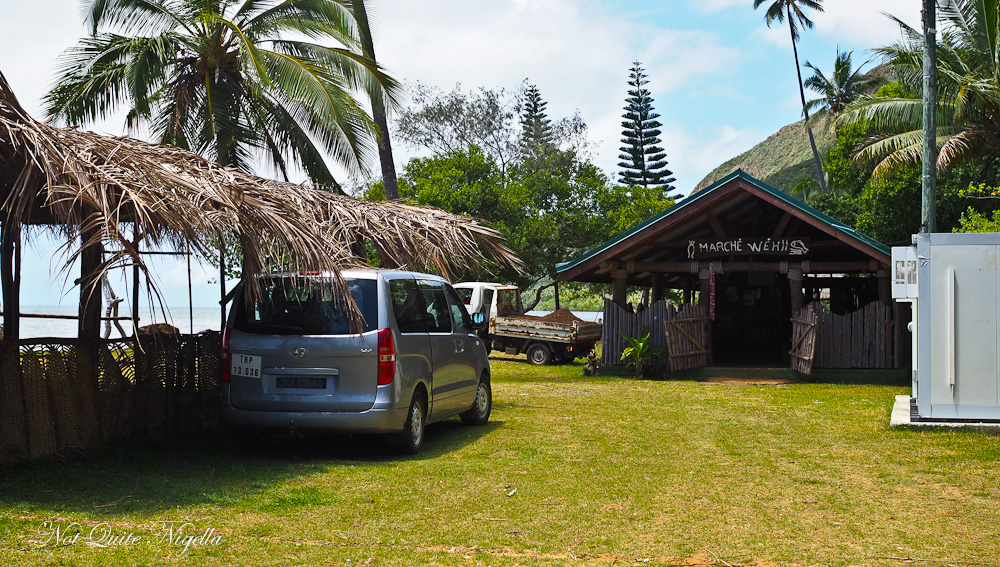 When the Goro tribe's ancestors settled they were moved to the picturesque area facing Lemon Bay as that was where the missionaries would arrive by boat to educate them. They now occupy a stunning stretch of coastline. One weekend in November each year they hold a "Festival Of The Sea" (Le Fête de la Mer) where up to 2,000 people come along to partake of a seafood feast. There is an enormous freezer where the catch is stored for times like this. 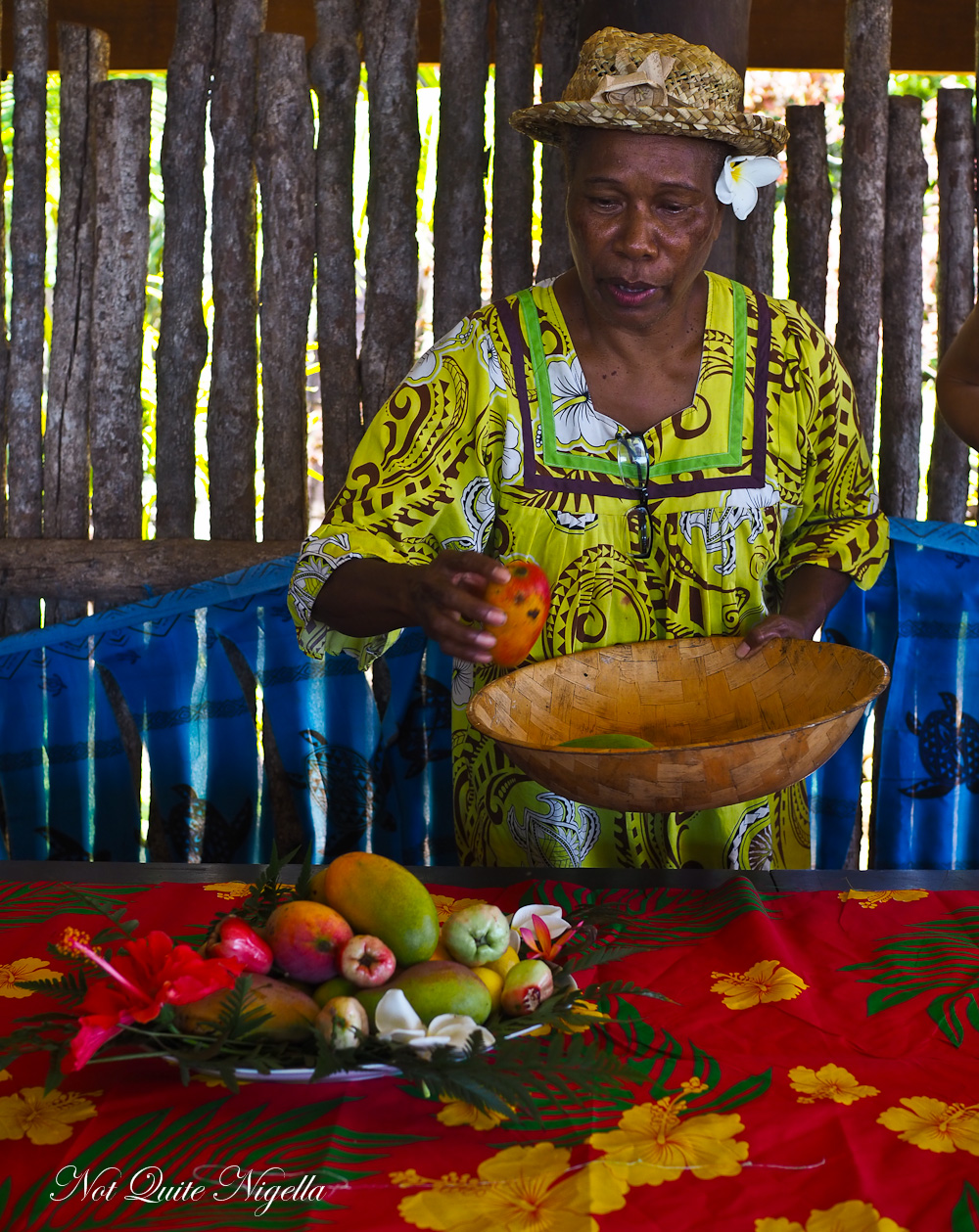 Marie-Noelle is the sister of a tribal elder and she is teaching us how to prepare a bougna. But first there is the "custom" of gift giving. Whenever you visit a tribe's village you bring a gift, in this case it is a cloth in which there is money folded. Marie-Noelle welcomes us and thanks us for the gift.

We watch her stripping the thick centre vein from enormous banana leaves and then she folds it over in a large bowl. On top of this she places layers of the food, placing the longest to cook at the bottom such as taro, and then the rest on top. Usually there would be seafood but we have someone that is allergic to seafood here so we have quail. These are an introduced species that has thrived here and is a locally caught bird. The final touch are leeks, rosemary and coconut milk squeezed from freshly grated coconut. 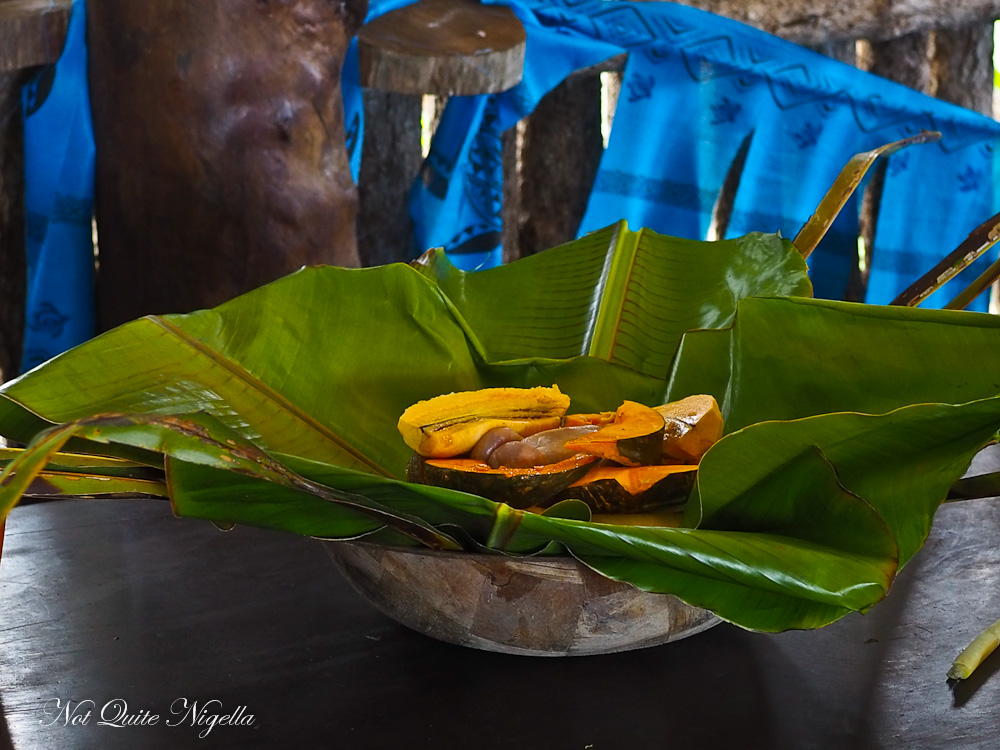 The coconut fronds are then wrapped around the round package to form a large round parcel. These fronds are then plaited to give it a tail which also helps lift it in and out of the ground and sometimes these are also placed in Marmites or cast iron pots. 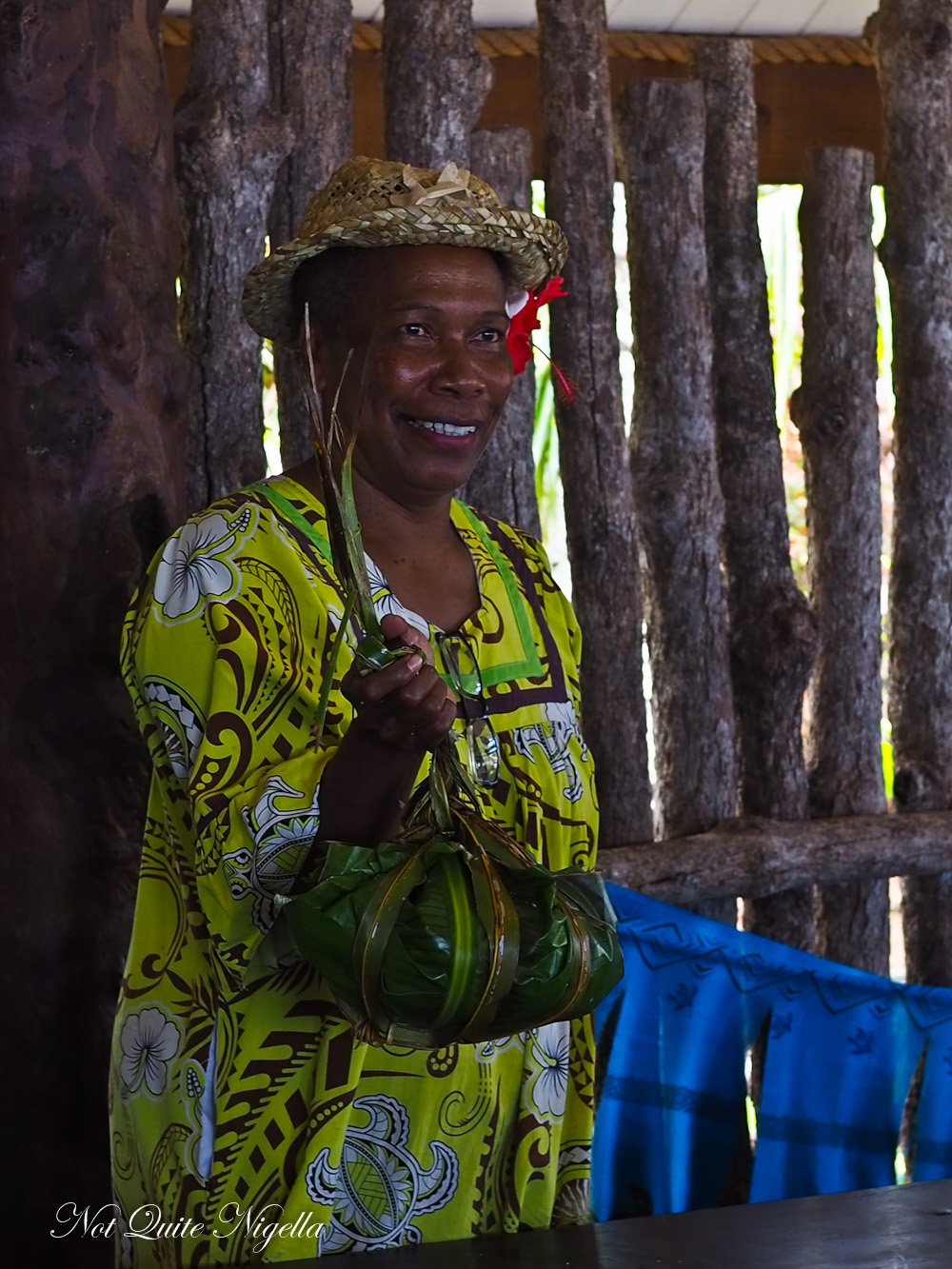 Lifting the bougna by its tail

It takes several hours to cook but Marie-Noelle and her 93 year old mum have prepared these earlier and she pulls out two steaming parcels. 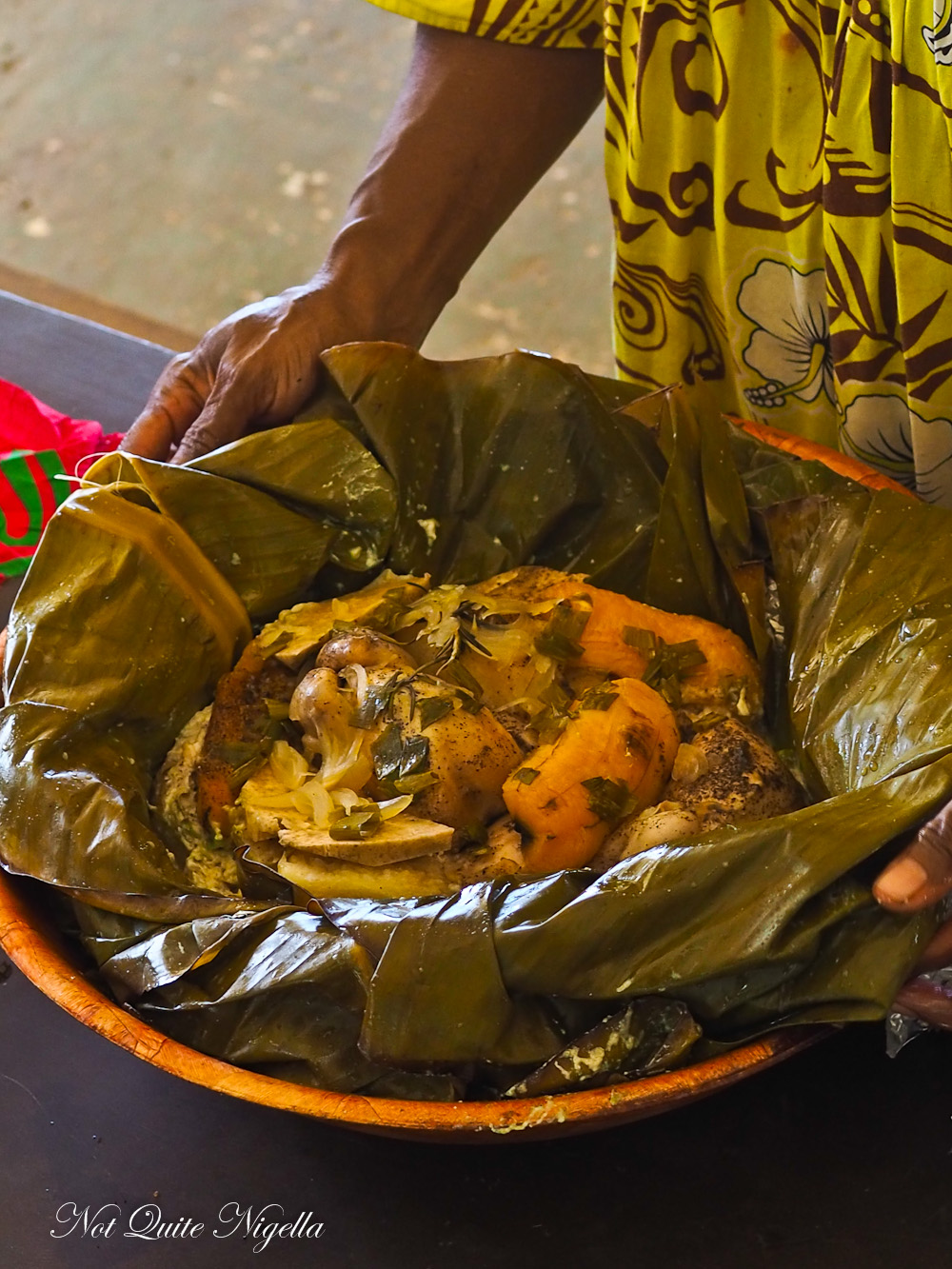 She cuts into them and the aroma perfumes the air with a punch, making us salivate and a murmur of anticipation escapes our lips. We crowd around breathing in the smell. They hand us Laguiole cutlery and I cut into the quail. It melts in the mouth it is so soft and you could almost crunch on the tiny bones. 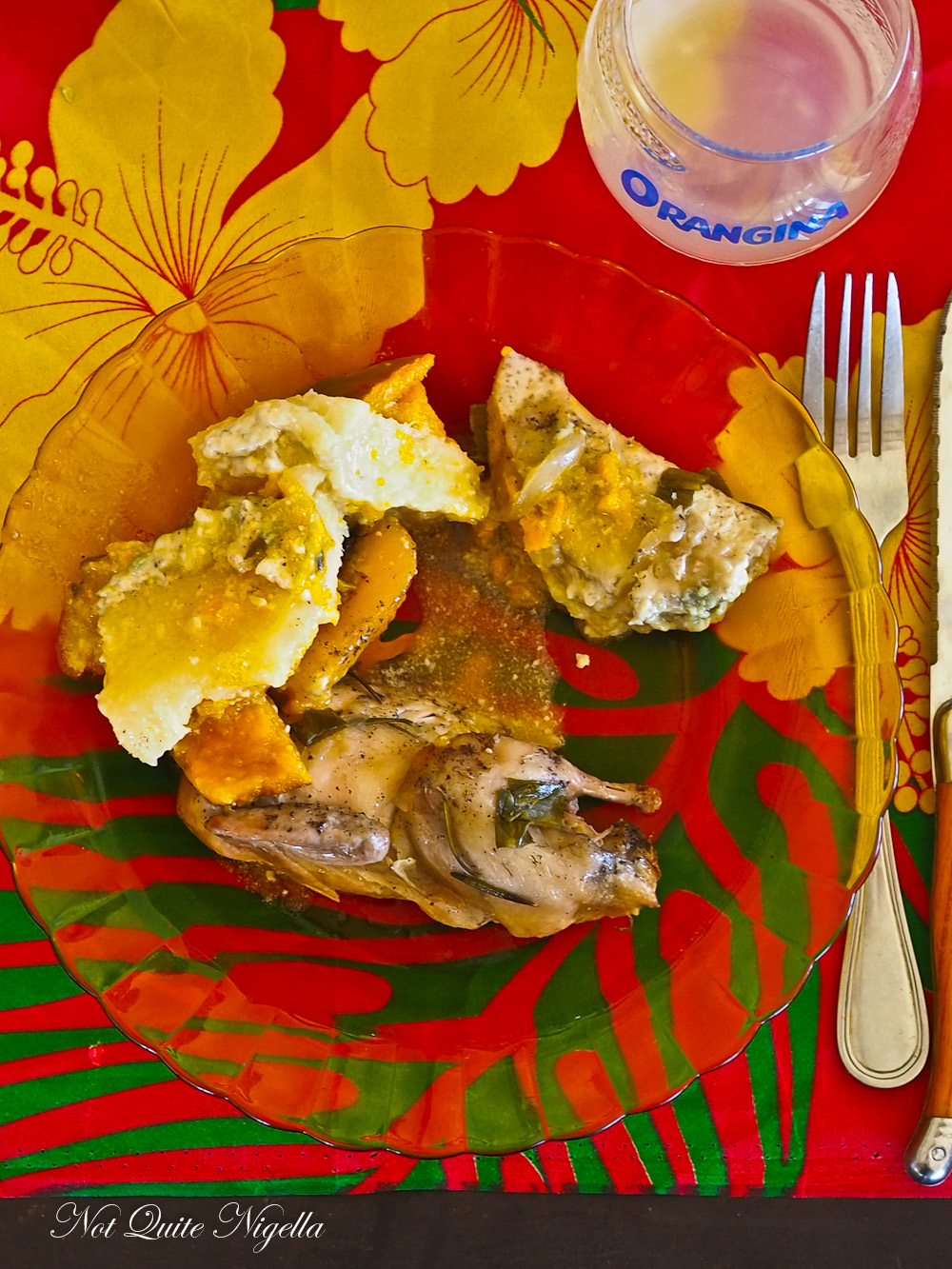 But the surprising favourite items are the banana and yams which are delicate and soft. This is all washed down with fresh lemonade. That is, before everyone has seconds and thirds. Dessert is freshly picked Alfonse mangoes and crunchy wax jambu fruit. The mango juice runs down our arms. It really does feel like the simple pleasures in life are the best.

So tell me Dear Reader, have you ever tried a bougna (or a hangi, umu or curanto)? What is your idea of paradise? 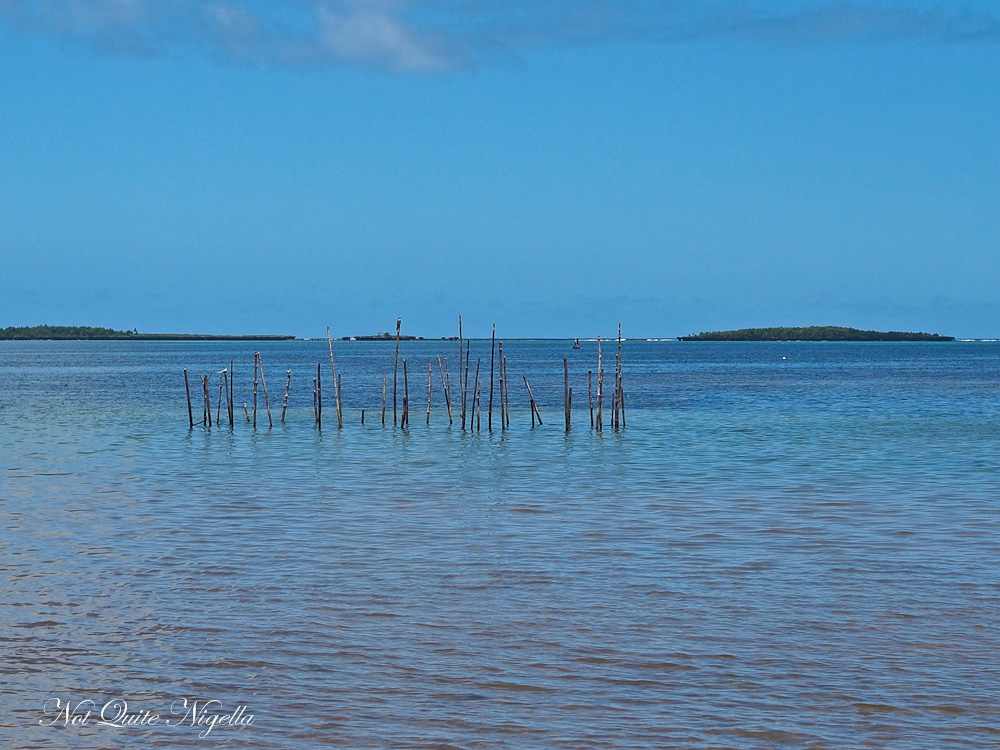