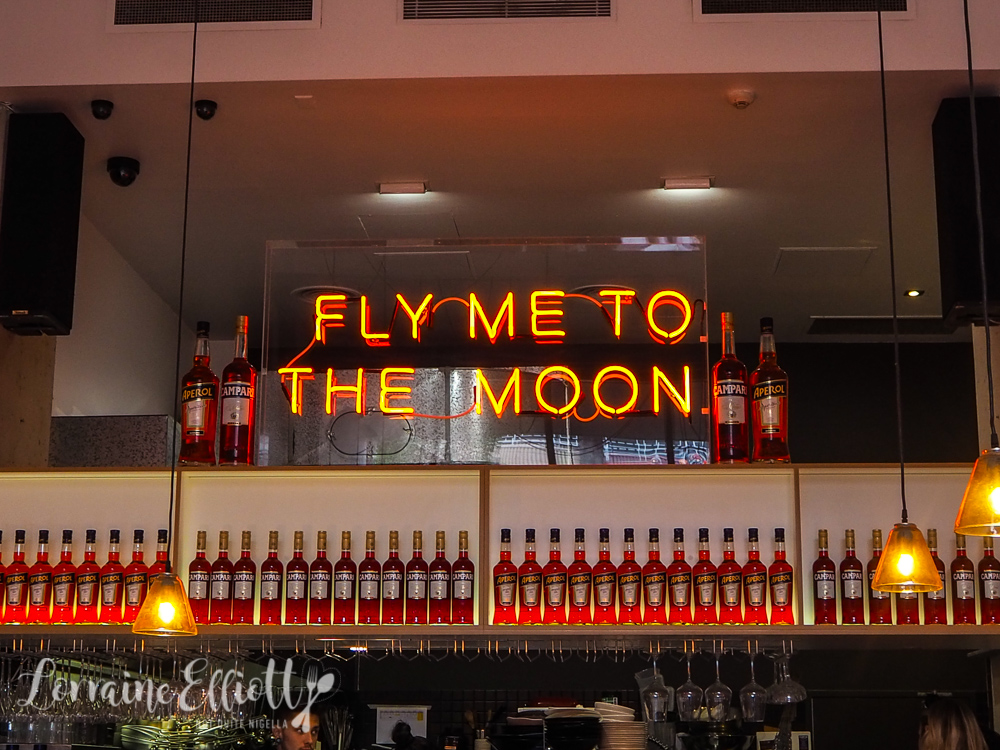 Mark + Vinny's is a new "Spritz and Spaghetti Bar" in Surry Hills. As the name suggests there is a large range of spritzes available as well as types of pasta from vegan, vegetarian to traditional. And this also includes a bright pink and bright blue pasta. We take a look to see if it is just an Instagram friendly gimmick or if it actually tastes good! 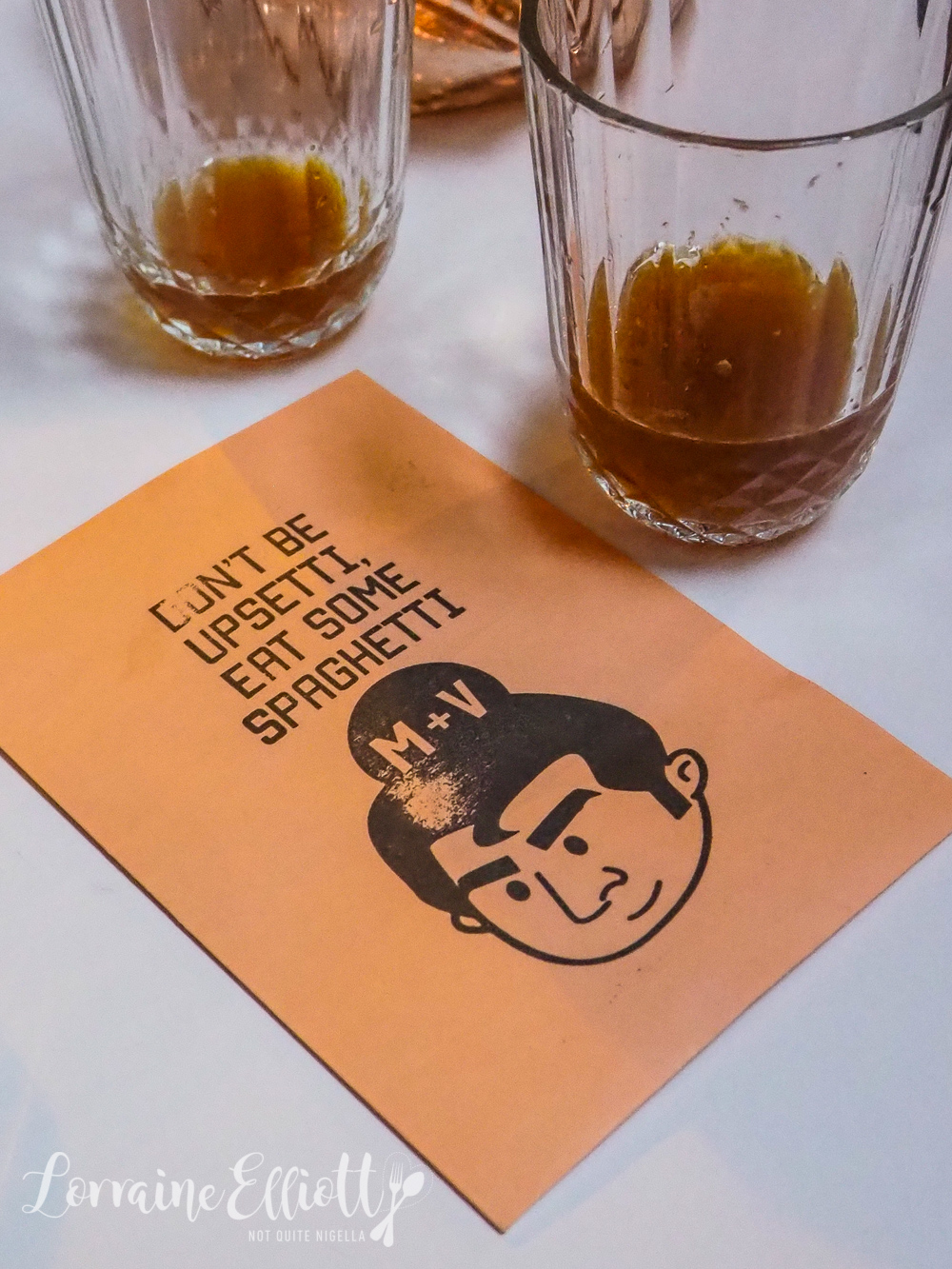 The namesakes are Mark Filippelli and Vince Pizzinga. Vinny's background is in the music industry (he is a songwriter and best buddies with Delta Goodrem). Mark's background is in hospitality with a dozen places in Melbourne. The head chef is Adrian Jankuloski who has worked at Icebergs and North Bondi Italian. And why the partially plant based menu? "We are strong proponents of a less meat-heavy more plant-based diet, but we don’t want to be absolute. We feel we can have more impact by providing people with choices - and of course paying homage to the original pasta bar," says Mark. All items on the menu marked V are vegan. 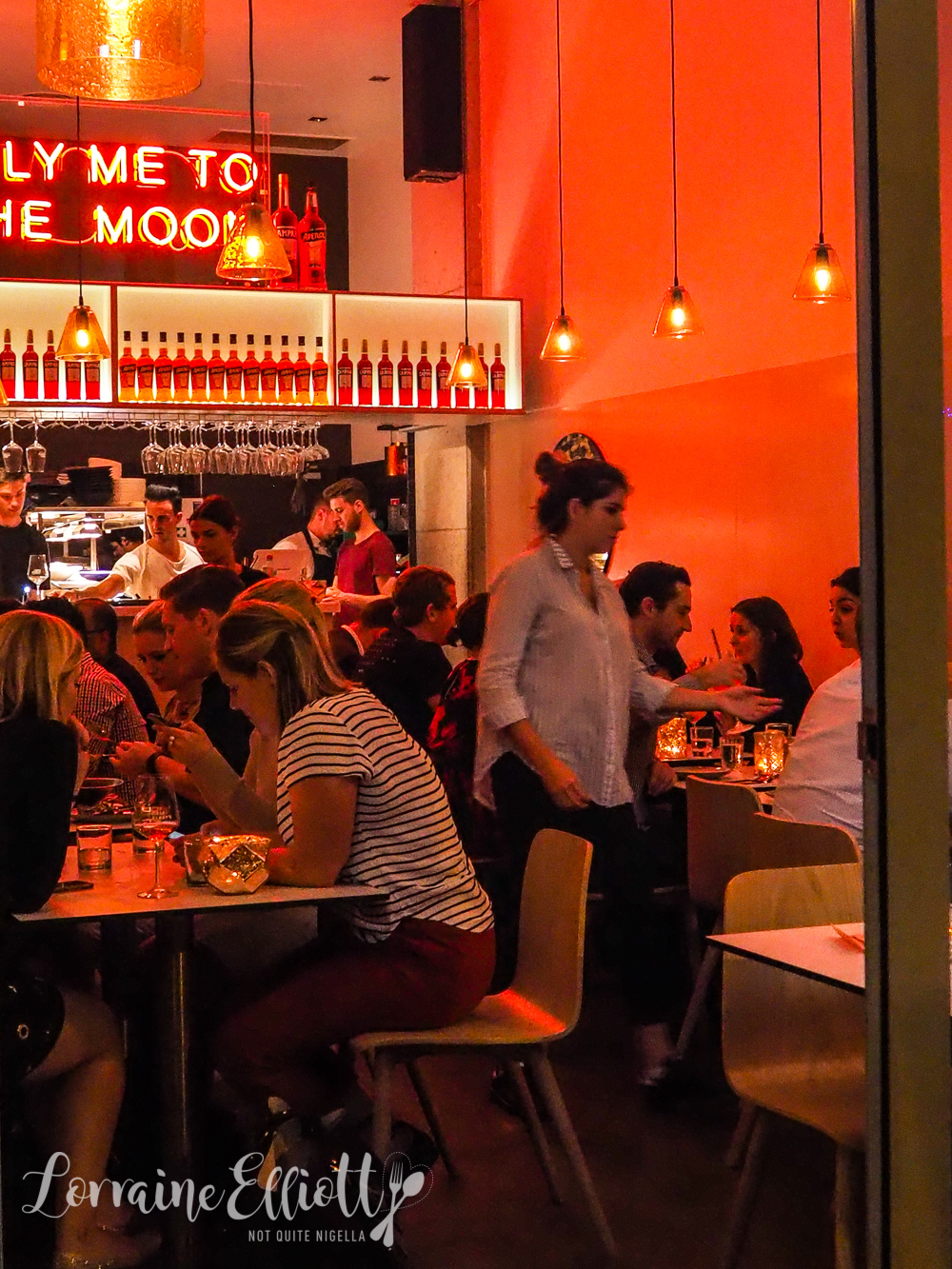 It's a small space that seats 45 people so you may want to book on busy nights as we watched many people without bookings having to come back either later or at a later time. It's also quite noisy so if that is an issue, there are a few outdoor tables that are somewhat buffered from the noise.

The spritz menu has over twenty different spritzes on offer from a sweet kombucha spritz to a frozen one, to one named after Delta Goodrem. The spritzes range from $16-$24 which can be a tad pricey for a spritz as they usually average around $14 (I love spritzes and always order them). The place is full of puns from "Don't be upsetti, just eat spaghetti" to "Spritz and Giggles." 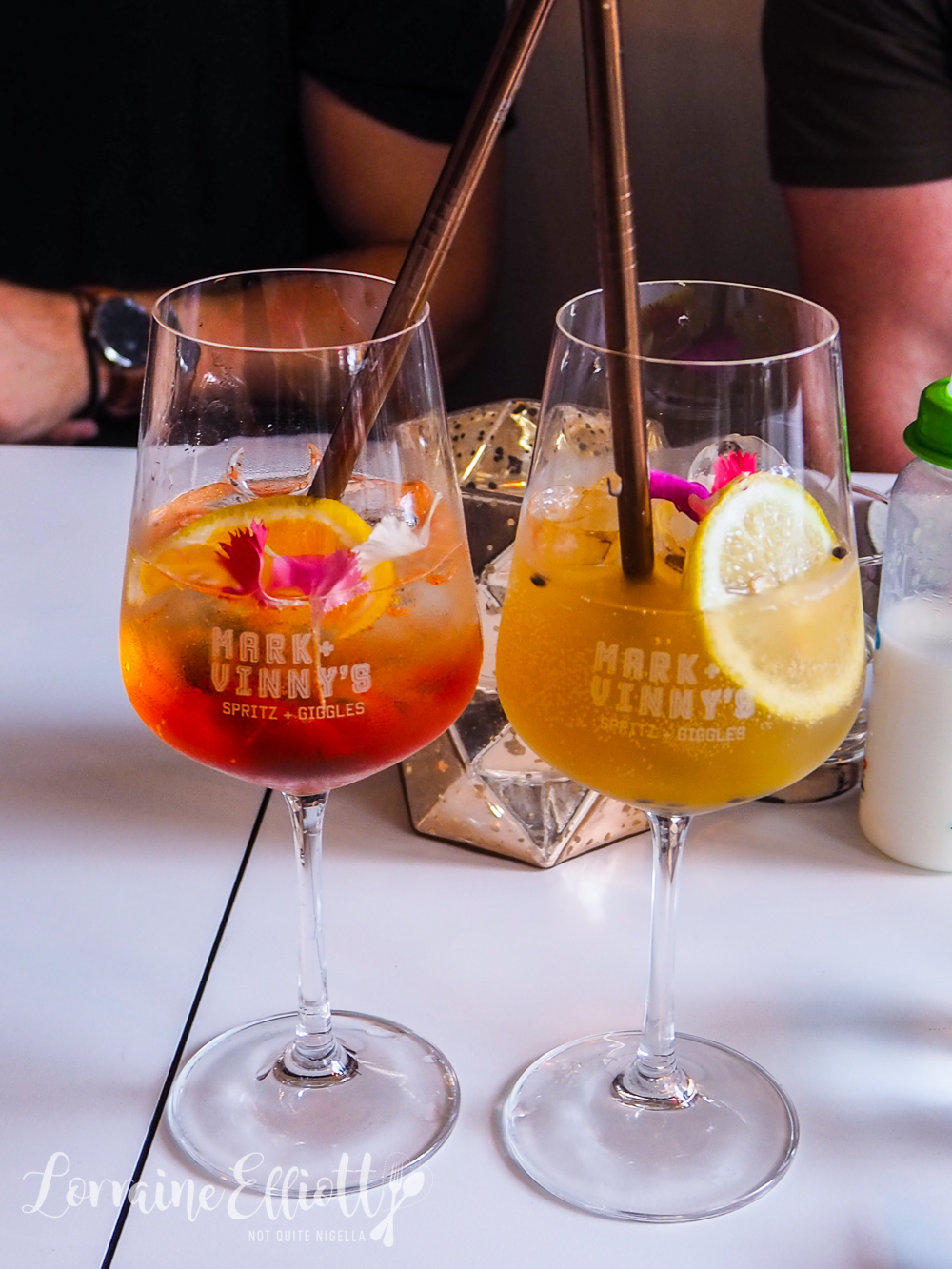 We start with drinks at the media tasting. The kombucha spritz is a sweet cocktail with Nonino amaro, kombucha, back strap ginger, thyme and orange while the Florence spritz is a classic with Aperol, Prosecco and Fever Tree Soda. I preferred the latter as the kombucha was a tad sweet for me. 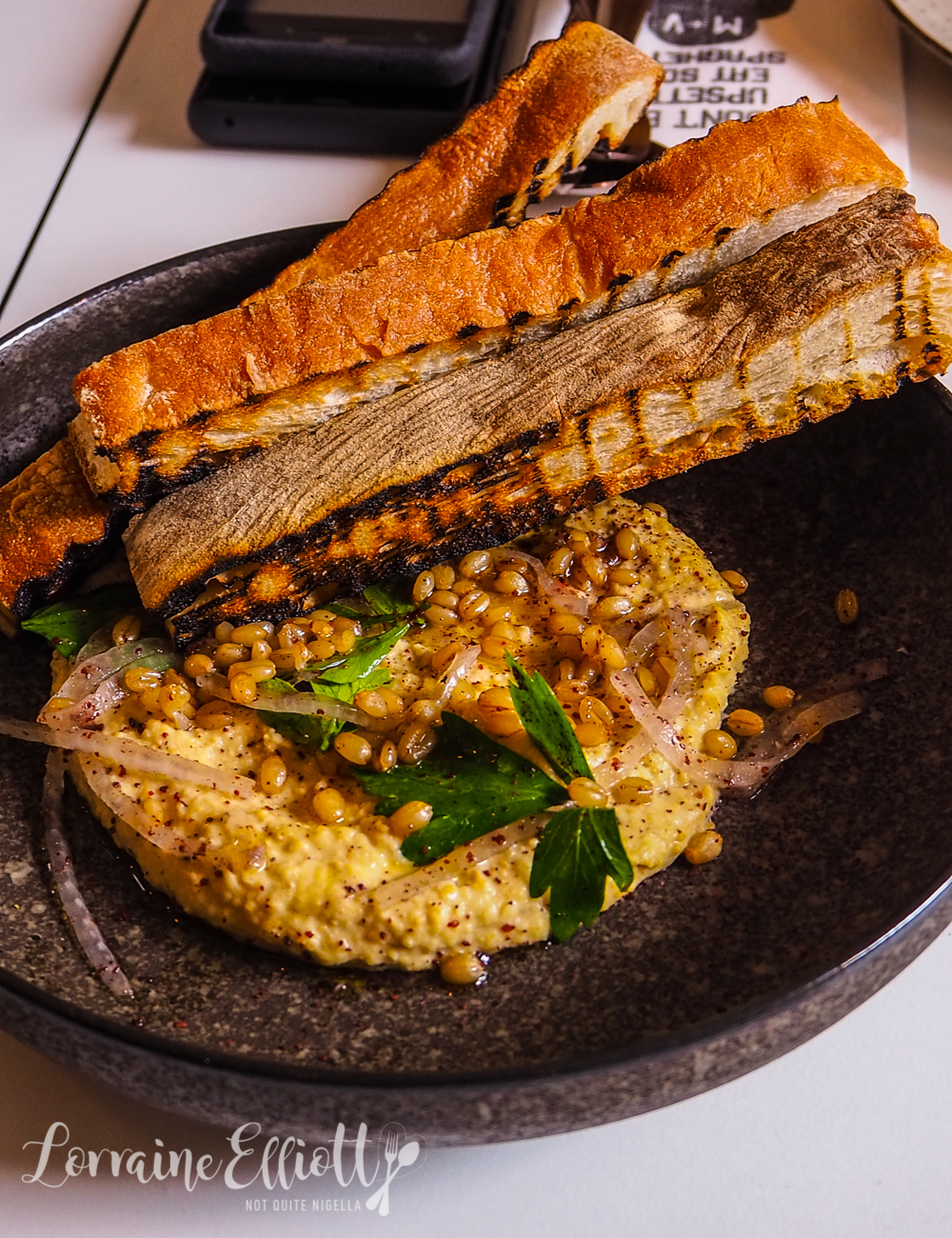 I would have come back to do the whole menu again and done our usual pay our own way and book anonymously but I didn't have a lot of time and only so much stomach space so the first few dishes are from the tasting. The chickpea hummus is served with slices of toasted schiacciata bread and topped with farro to give it added texture. It's pretty damn fantastic, and slightly different from other hummus with the addition of pickled onion on top and the farro. 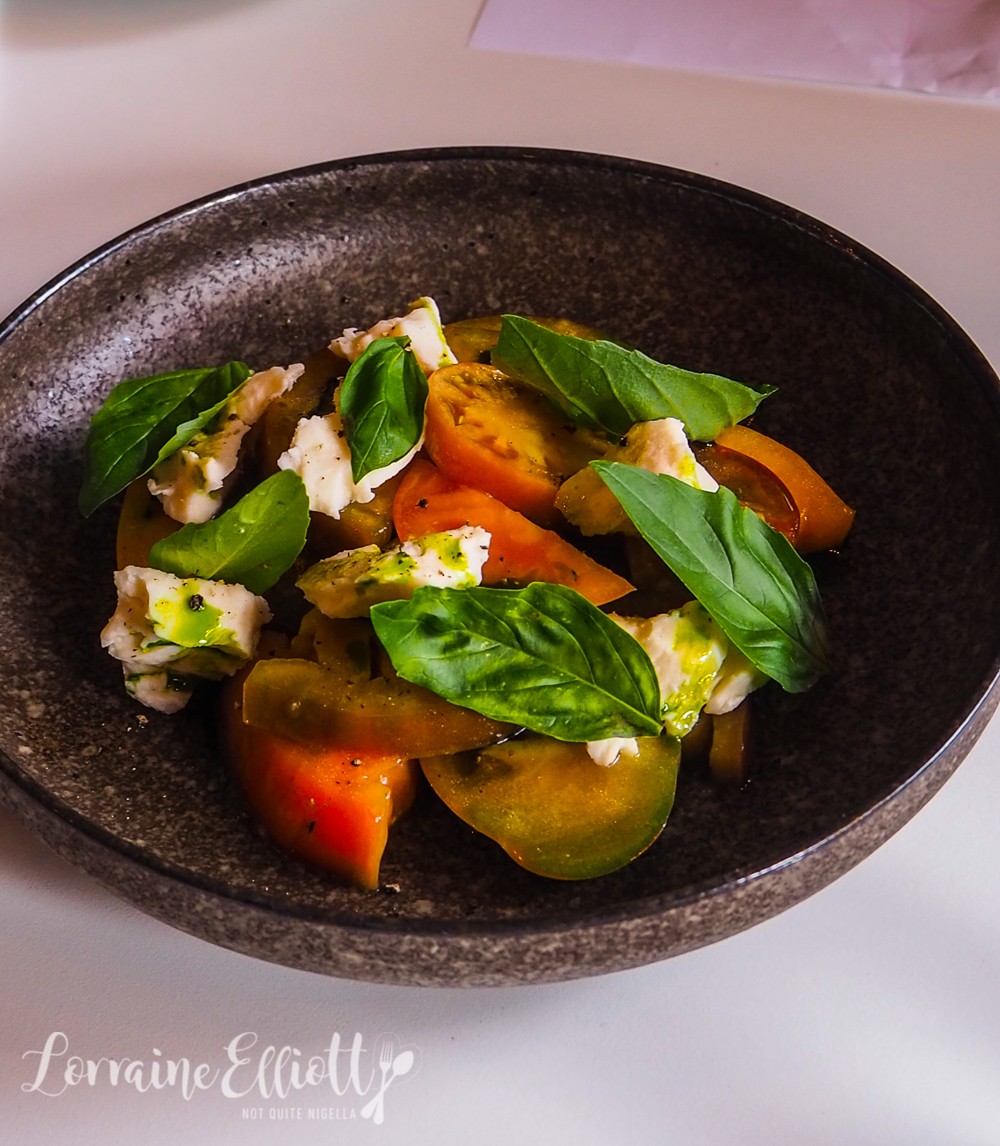 Soy mozzarella? Hmmm I was skeptical especially when I was told that it was soy and coconut oil based which is not a sexy sounding combination. But I guess tofu isn't that dissimilar from mozzarella in terms of its mild taste and springy texture. And when combined with the heirloom tomato slices, fresh basil leaves and vinaigrette it does a pretty good job of imitating a Caprese salad with mozzarella albeit a vegan version. 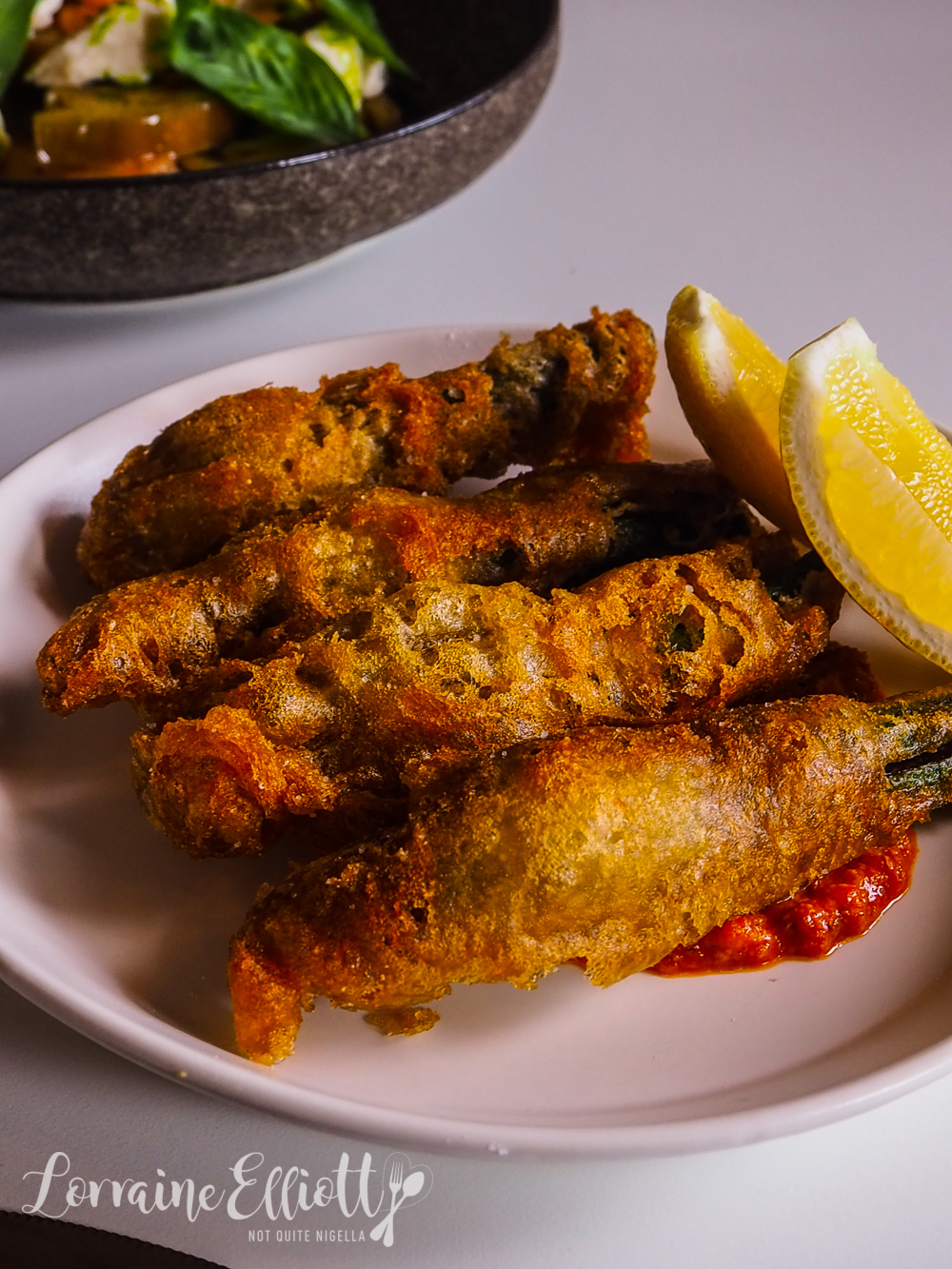 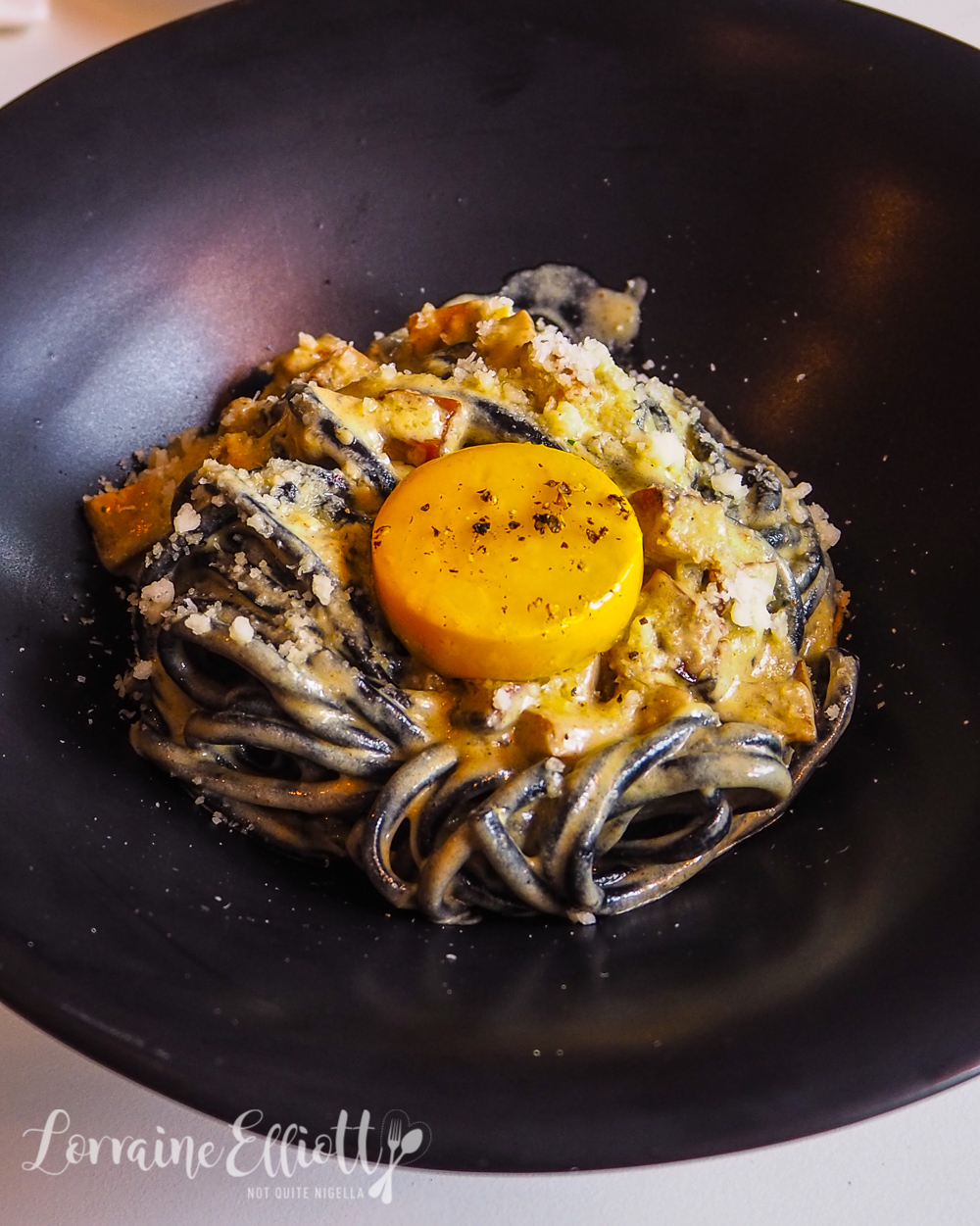 Usually black pasta is coloured with squid ink but here they use activated charcoal to give it that dark as the night shade. This is a version of carbonara with smoked mushrooms treated in the same way as you would pork to make pancetta. 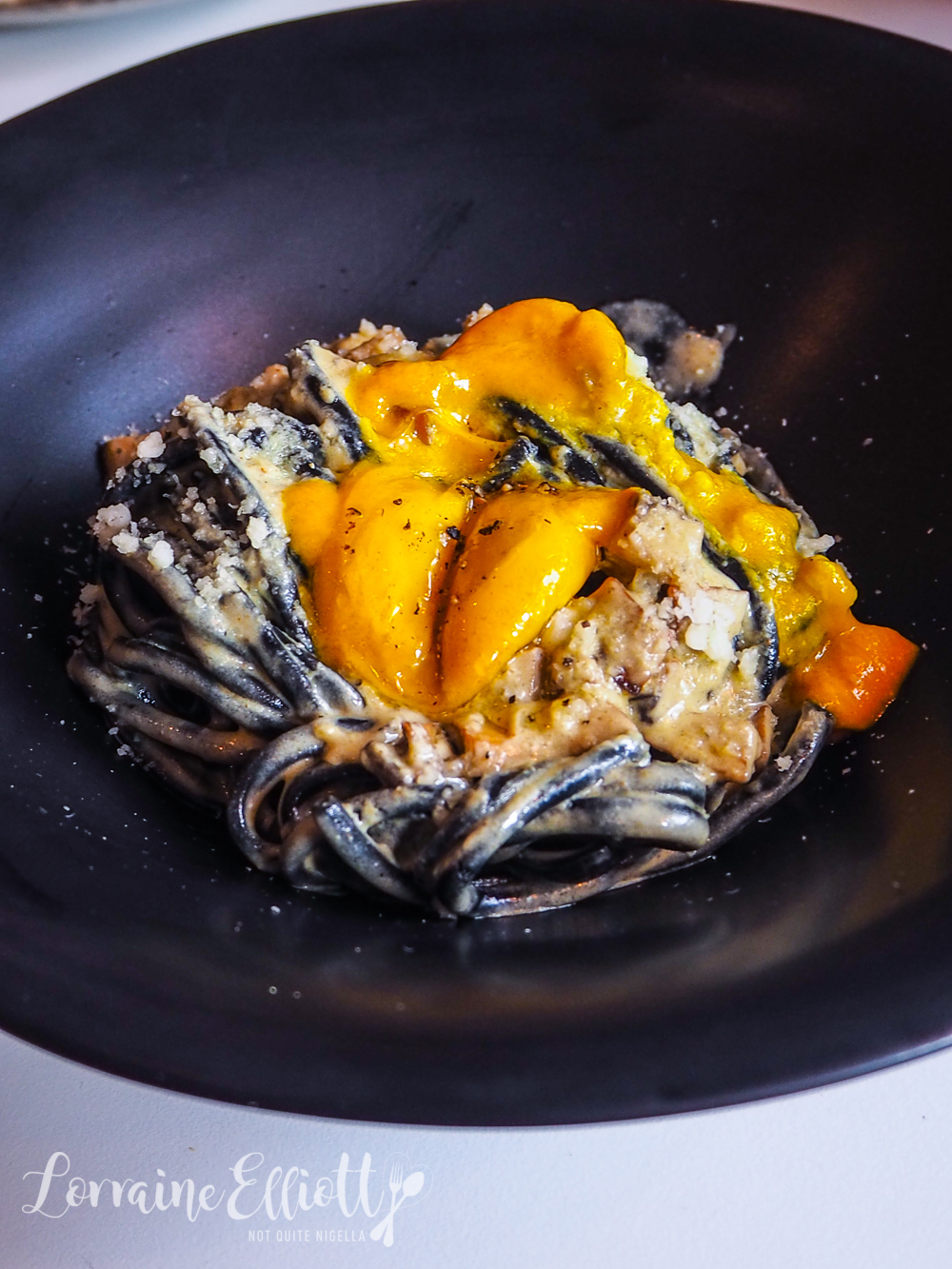 The egg yolk is made of sweet potato and a plant based parmesan with a reverse spherification process. You break it and dress the rest of the pasta as you could with a carbonara. And suddenly I can't stop eating this pasta. One thing I would have loved though, and that doesn't really seem to be given here unless you order a dish with it, is some bread to mop up the rich sauces. 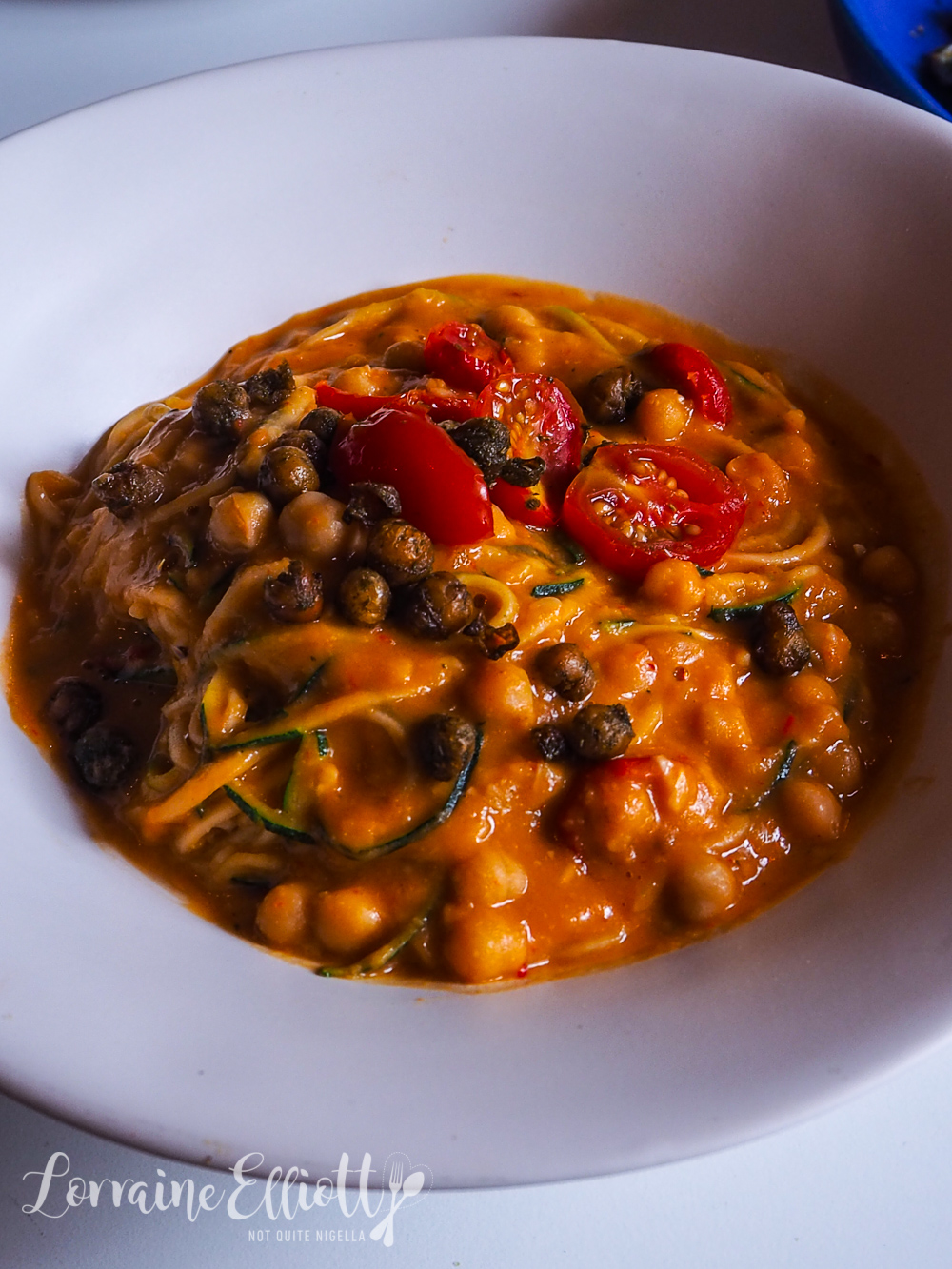 This zucchini linguini is more angel hair in texture than linguine but it's for those that want a gluten free and vegan pasta (hence why it is dubbed "The Impasta"). The sauce is a chickpea ragu which is creamy with a good amount of flavour to it. It's made with tomato sugo, sweet cherry tomato halves and chickpeas two ways, slow cooked and fried. We also overheard another table another night that we visited switching the zucchini linguine for wholemeal spaghetti and they seemed to like it. 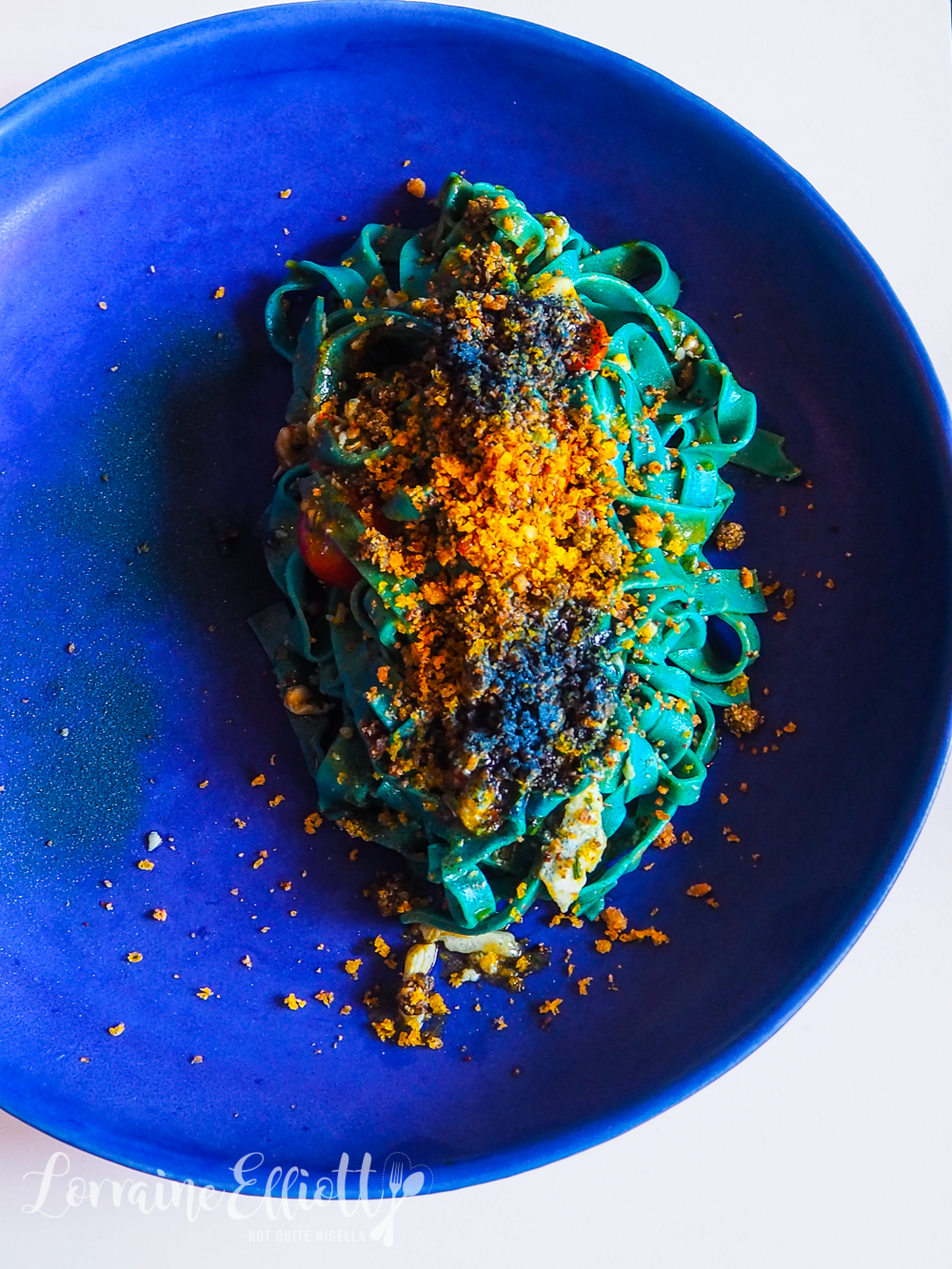 I'm going to put my hand up right now and say that this was a dish that I thought I wouldn't like. I'm not fond of spirulina and feel that if one were to ever eat that punish they should be granted ever lasting life as compensation. This is made with Blue Magik spirulina which gives it that bright blue colour but it seems milder than green spirulina. It is also the only pasta that is made in house. The rest of them are made for them by Vinny's childhood friend artisan pasta maker Joe Cassaniti of Peppes Pasta. The fettucine is paired with blue swimmer crab, bottarga and pangrattato for texture. Quite a few people liked it and I did although I preferred the bucatini. 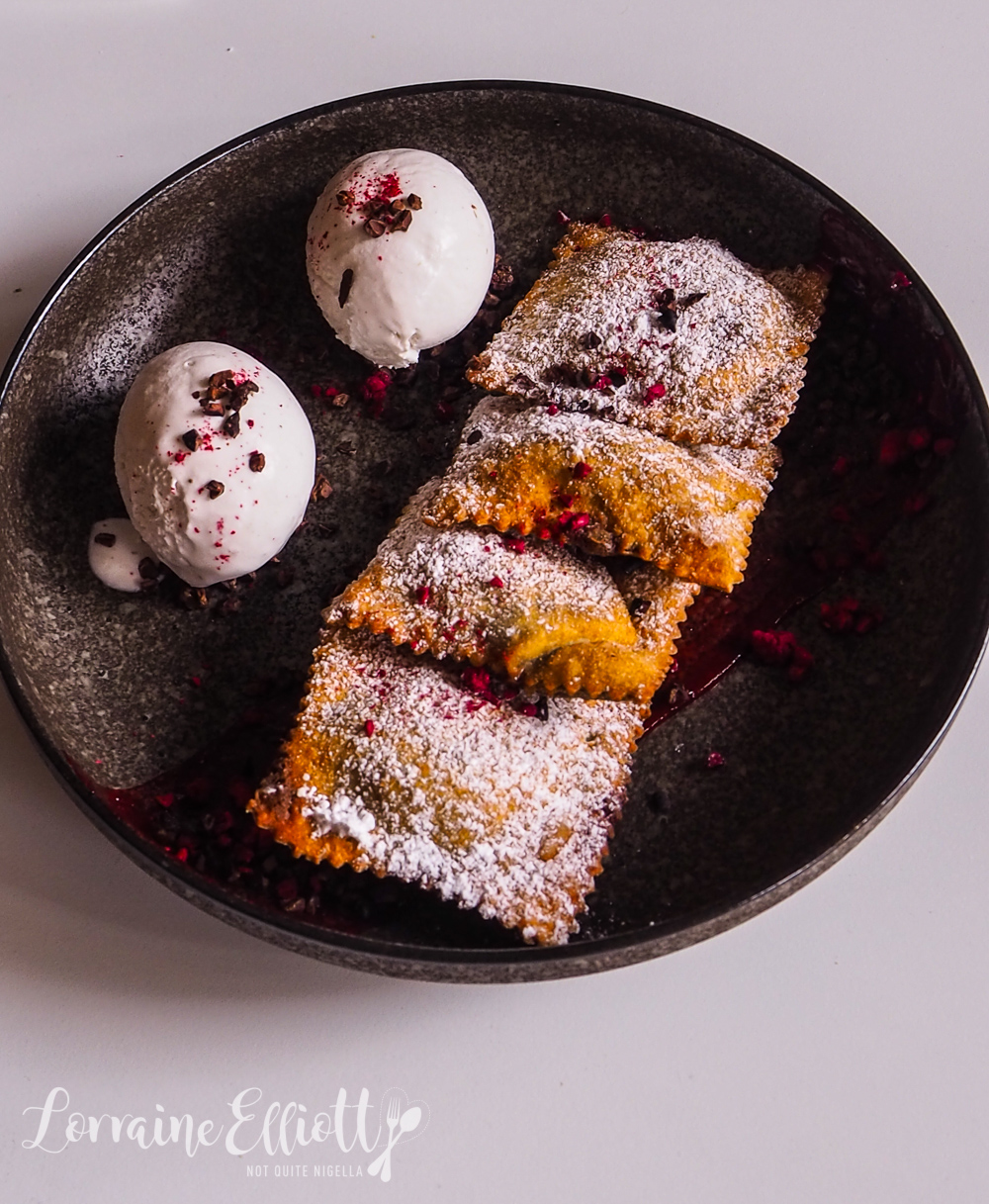 There are three desserts on the menu. There's a spritz cake, an apple pie agnoletti and the Vegan No-tella ravioli. These are deep fried ravioli filled with their own chocolate ganache version of hot, liquid Nutella using dark chocolate, raw cacao and hazelnuts. It comes with two scoops of coconut ice cream, raspberry sauce and cacao nibs. They're rich, crisp and shatter with a liquid centre oozing with every bite although I do think this dessert is a tad pricey for a casual place. 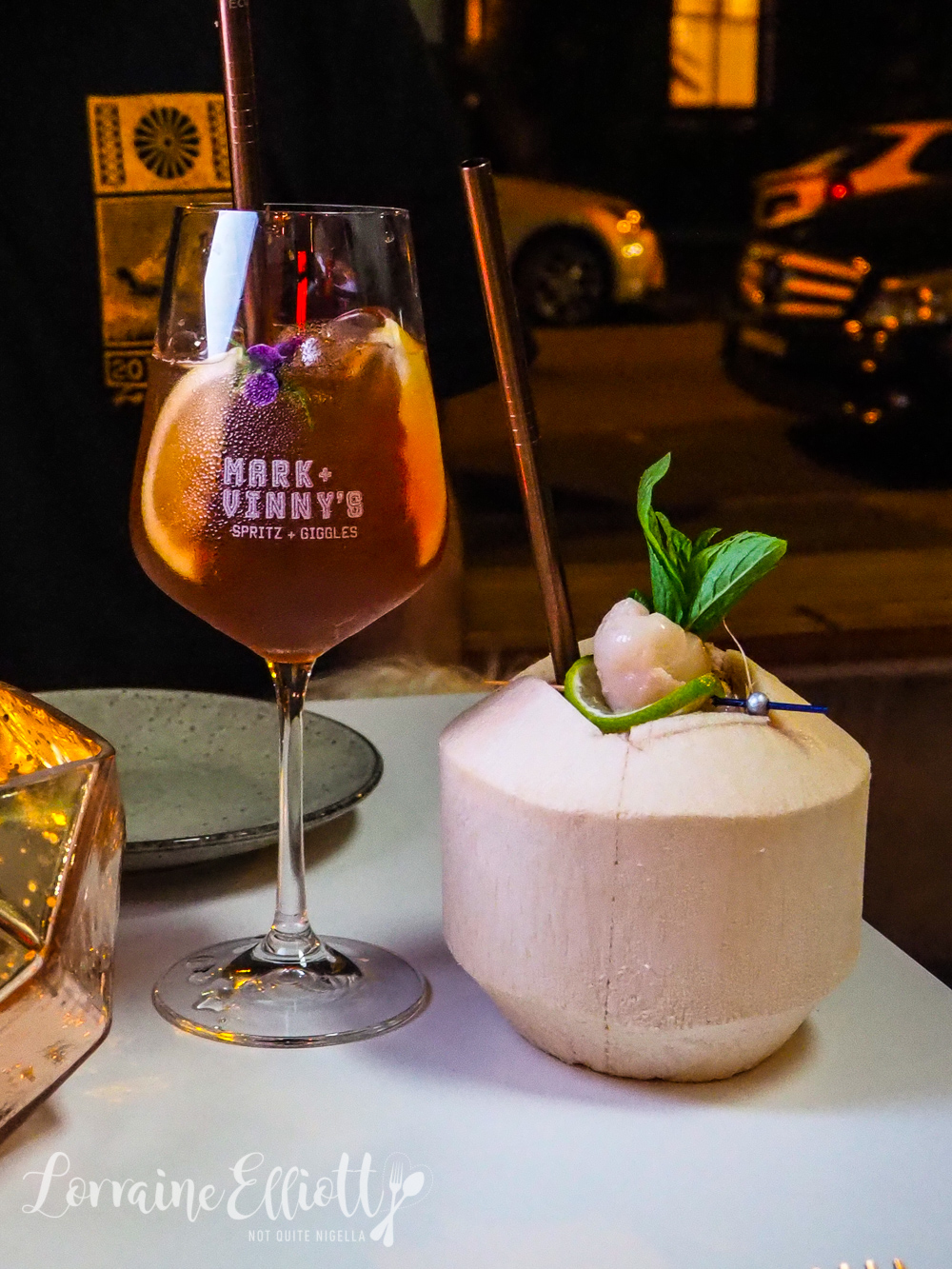 I return another night with Mr NQN and Mochi in tow. We each start with a spritz. For Pedro Ximinez loving Mr NQN it's the "Be Right Back Byrrh" with Byrrh Grand quinquina, Pedro Ximinez, basil, lemon bitters, rosé pet nat, smoked lemonade. This is as complex as a main dish with smoky, sweet and savoury elements. Mine is the Mark Spritz with Aperol, ginger, blackberry, coconut water and Prosecco foam served in a coconut. This is lighter, fruitier and fun in contrast to the seriousness of the Be Right Back Byrrh. 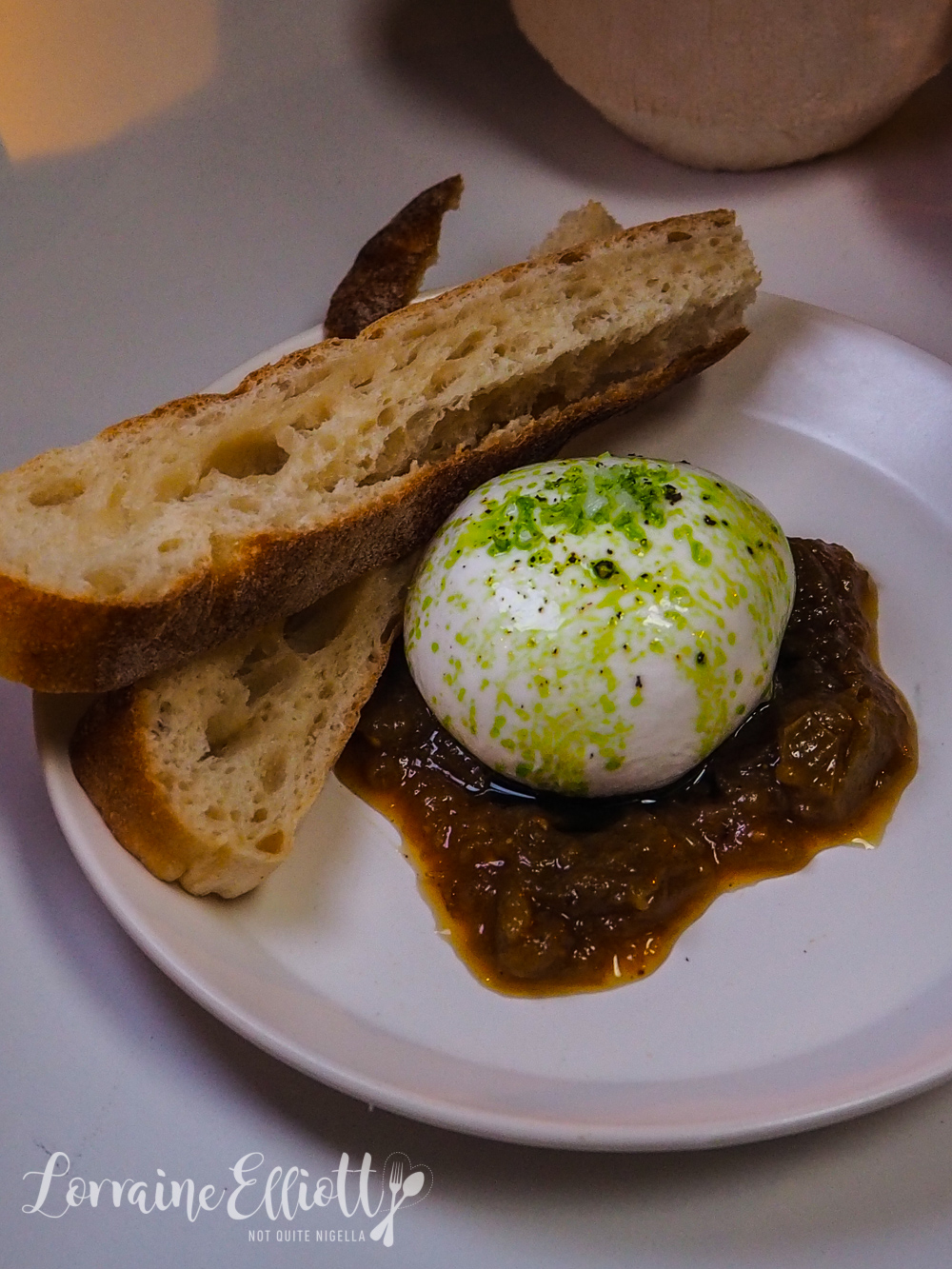 I asked Mr NQN how hungry he was and he answers that he ate his lunch at 10:30am so he is ravenous (that's music to my ears really when I hear people that I'm dining with are hungry). The burrata, unlike the mozzarella in the Caprese, is the real deal, cow's milk and all. It is served with basil oil on a bed of green tomato jam and warm schiacciata bread. This is very good as it is and the green tomato jam is something I want to recreate at home. But when our lovely waitress brings over some of the chilli oil (a recipe from Vinny) and then you've got a dish that you don't want to share with anyone. 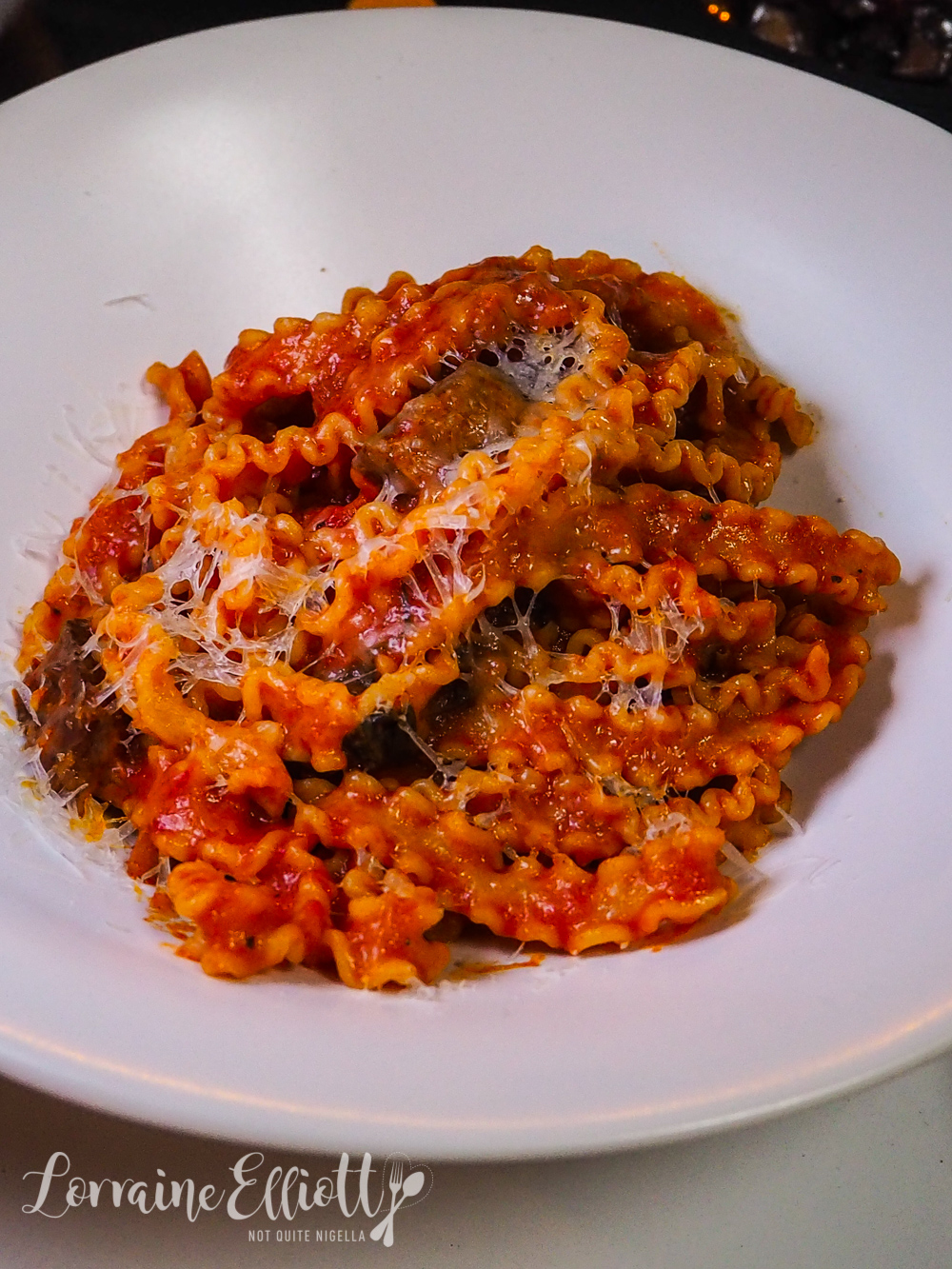 The semolina mafalada is like a frilly ribbon pasta that reminds me of a long garter belt. It is a pasta named after Princess Mafalda of Savoy. It's served with Amatriciana sauce, double smoked pancetta, guanciale, pecorino, tomato and chilli. Amatriciana was one of my favourite sauces in Rome and this is a good one, with the pasta nicely al dente but I did feel like it was light in the pancetta and guanciale. 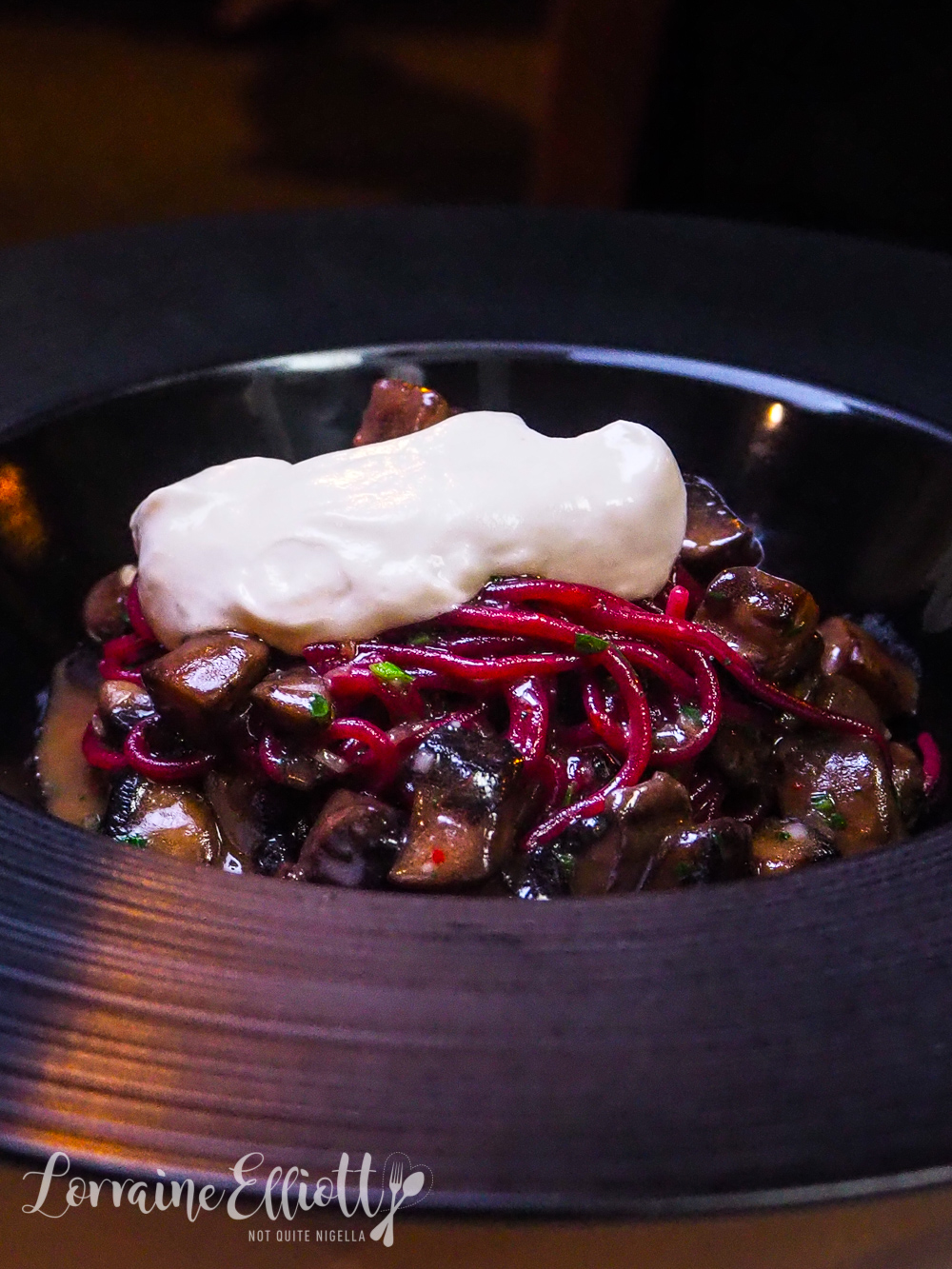 I more had eyes for the beetroot spaghettini, the thin, delicate purple noodles served with pieces of mushrooms, truffle and creamy cashew creme fraiche. The spaghettini is slightly doughy but the flavours are fantastic and who knew that I'd choose the vegan pasta as my favourite. 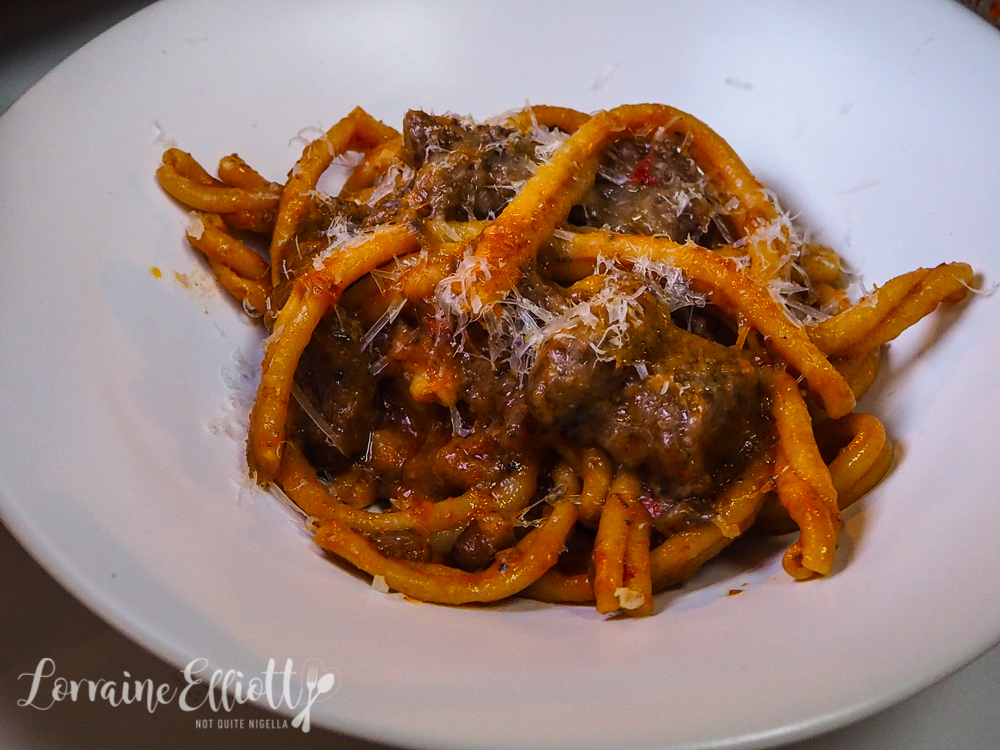 Until of course the maccaruni came along. This is a dish from Calabria which is where Vinny's family is from. This dish is perfect with his chilli sauce made using chillies and basil from his father's garden. There are large chunks of the softest Ranger's Valley beef rib ragu and this comes together beautifully with dollops of the hot but not fiery chilli sauce. 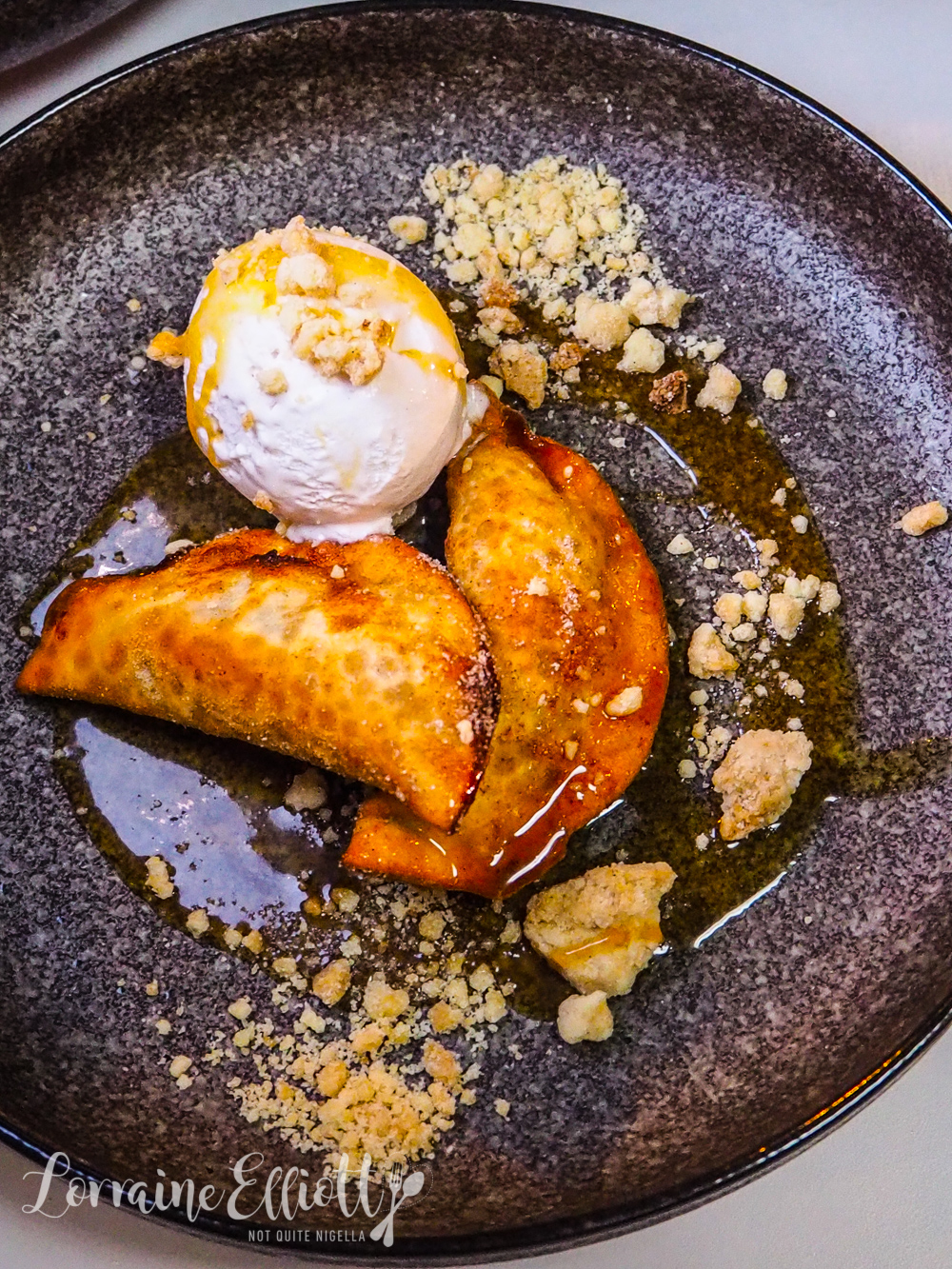 As we had tried the Nutella ravioli already we decided to try the Apple Pie agnolotti. It comes two pieces to a serve and the deep fried pasta crescents are like an upmarket apple pie from a certain burger chain. It is served with salted caramel sauce, coconut ice cream and a delicious shortbread biscuit crumb. 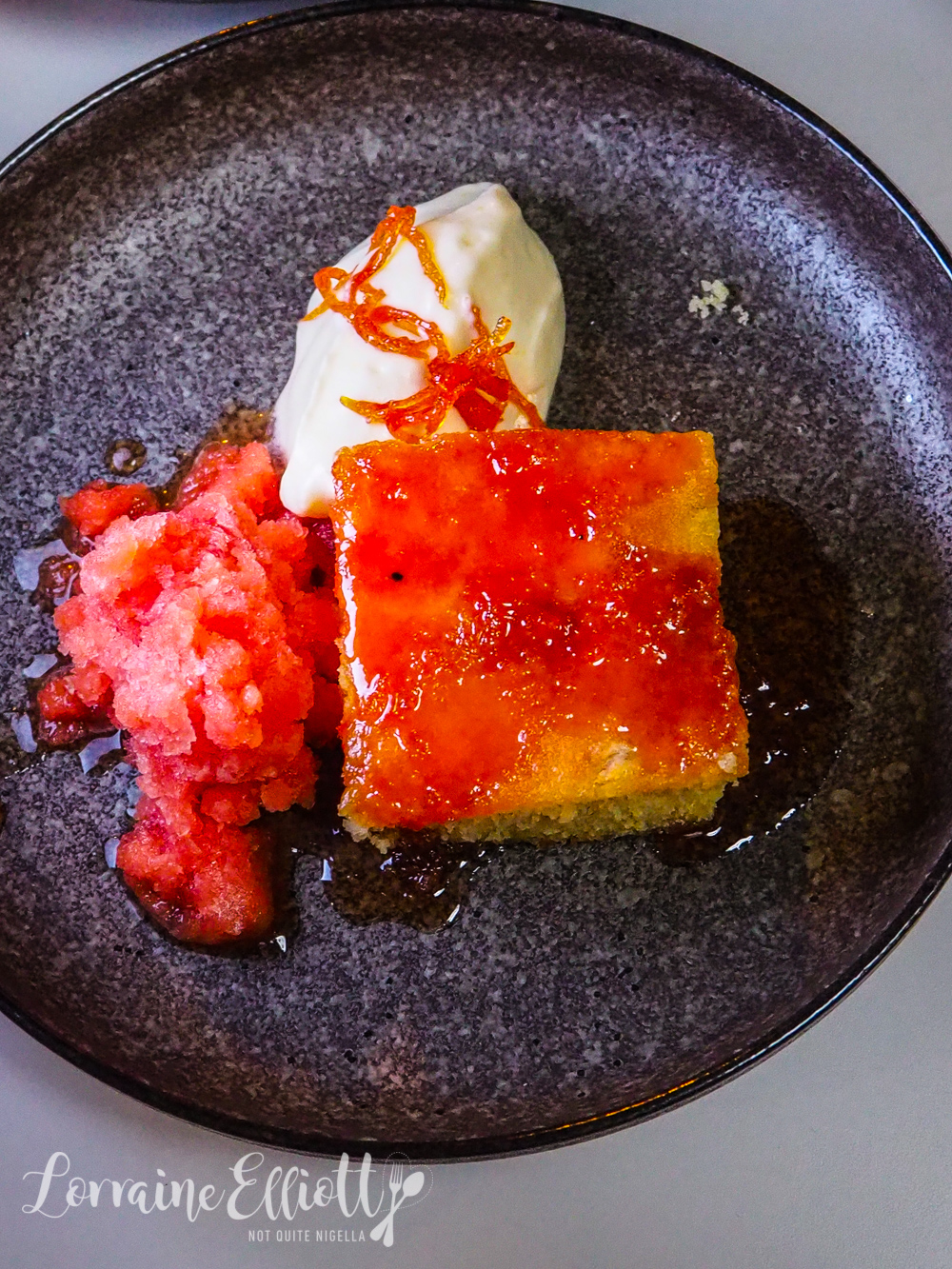 I was curious to see what the spritz cake was like. It's named after head chef Adrian and pastry and sous chef Connie. It brings the bitterness of the spritz through orange and orange zest. It is served with a blood orange granila, Proscecco zabaglione and a warm square of bitter orange butter cake.

So tell me Dear Reader, would you go for the traditional pasta or the vegan versions? What do you think of these more plant based menus? Do they appeal to you more than strictly vegan or a regular menu with fewer plant based options?

The second meal was independently paid for, the first meal was the media tasting.