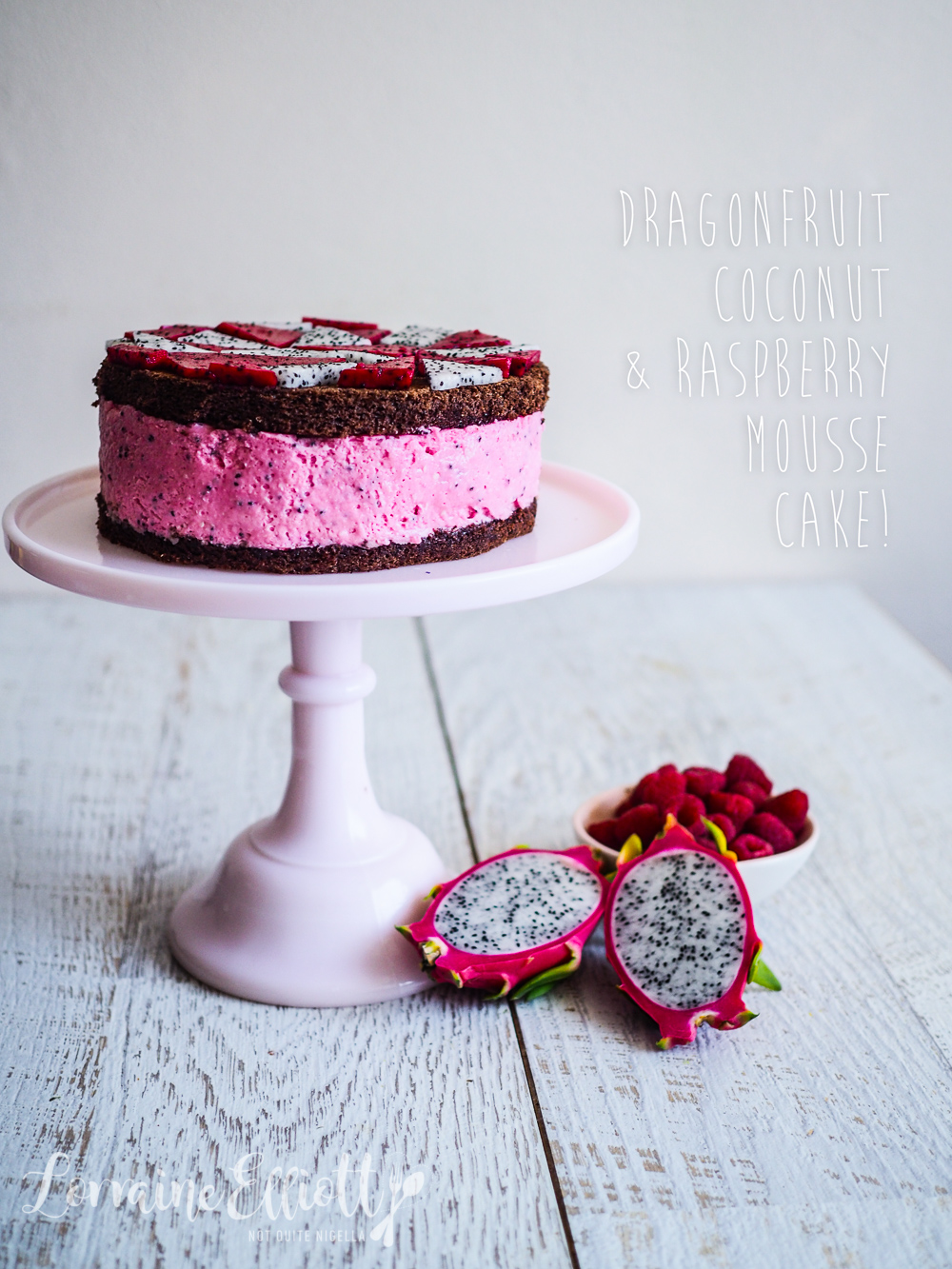 When I recently saw dragon fruit for a bargain price I immediately snatched up a kilo of them with the idea to make them into a cake for Mother's Day coming up. And what a cake it was! With a chocolate sponge top and bottom, a dragon fruit, raspberry and white chocolate mousse and a dragon fruit jelly insert it's 50 shades of pink! I called her Rosalie.

Dragon fruit or pitaya is actually a type of cactus and that really gives you an idea as to its flavour and texture. The flavour is quite mild and not overly sweet although I love how refreshing it is. I usually associate it with Asia but it's native to Central and South America. I tried dragonfruit and sugar syrup juice in the sweltering heat of Yangshuo, China once and it was one of the most deliciously refreshing drinks. It's a bit watermelon in terms of juiciness and a bit kiwi fruit with the tiny seeds. 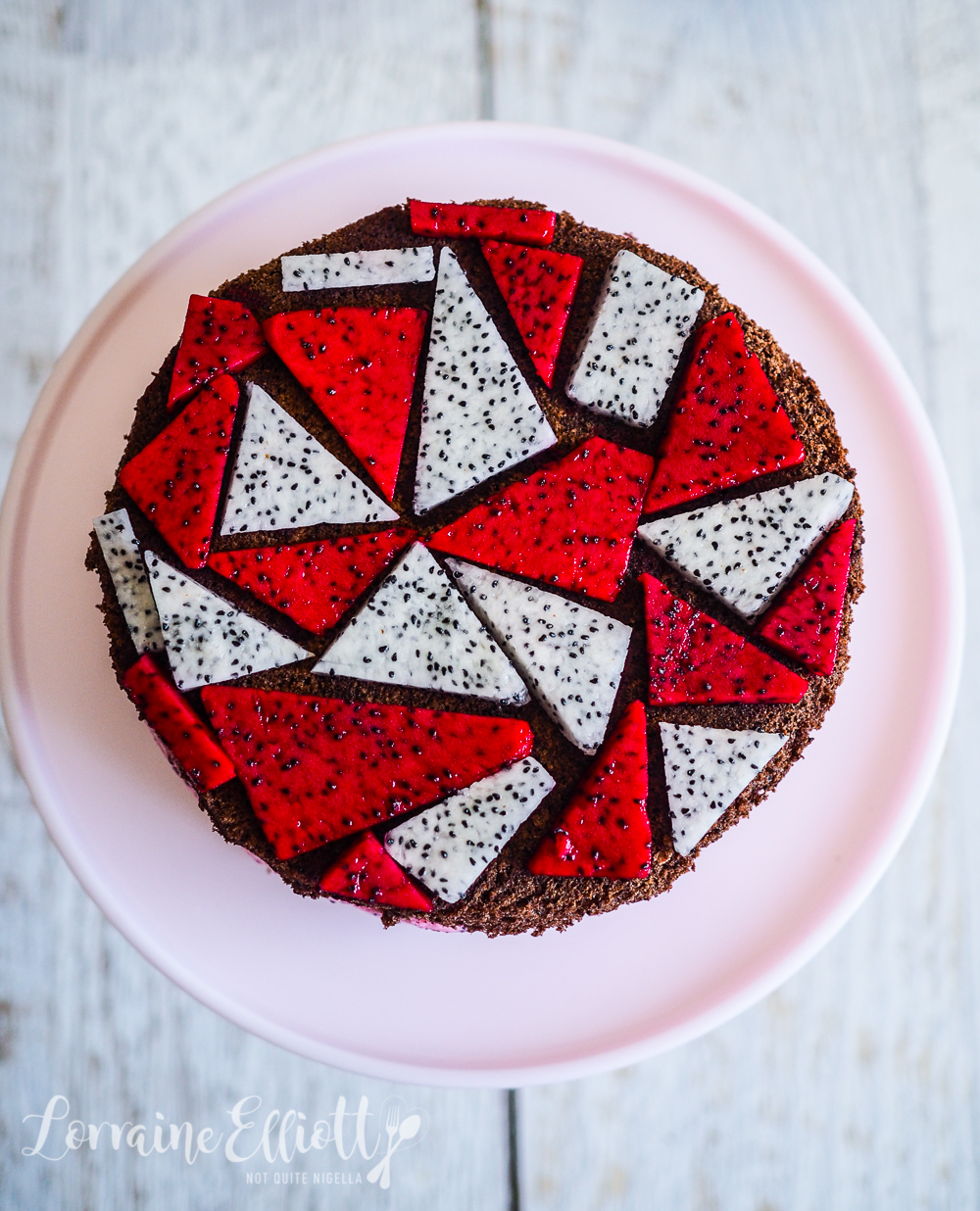 And when I say what a cake it was, I actually mean that this was not one of those easy, breezy cakes. This cake was a challenge. I was trying to make it during a really busy day. I had baked the chocolate sponges the day before and all I needed to do was make a jelly layer and a mousse. Easy right?

I had music playing and was whipping cream and about to add the white chocolate. For a minute I paused, a twinge alerted me to something wrong but you know those days where you're too busy to pay attention to twinges? I ignored it and added the white chocolate and pureed dragonfruit and I watched it curdle in front of my eyes. If this were a scene in a movie the camera would have come down from the sky and zeroed in on me. I would have been shaking my fists while looking up and screaming "Nooooooo!" 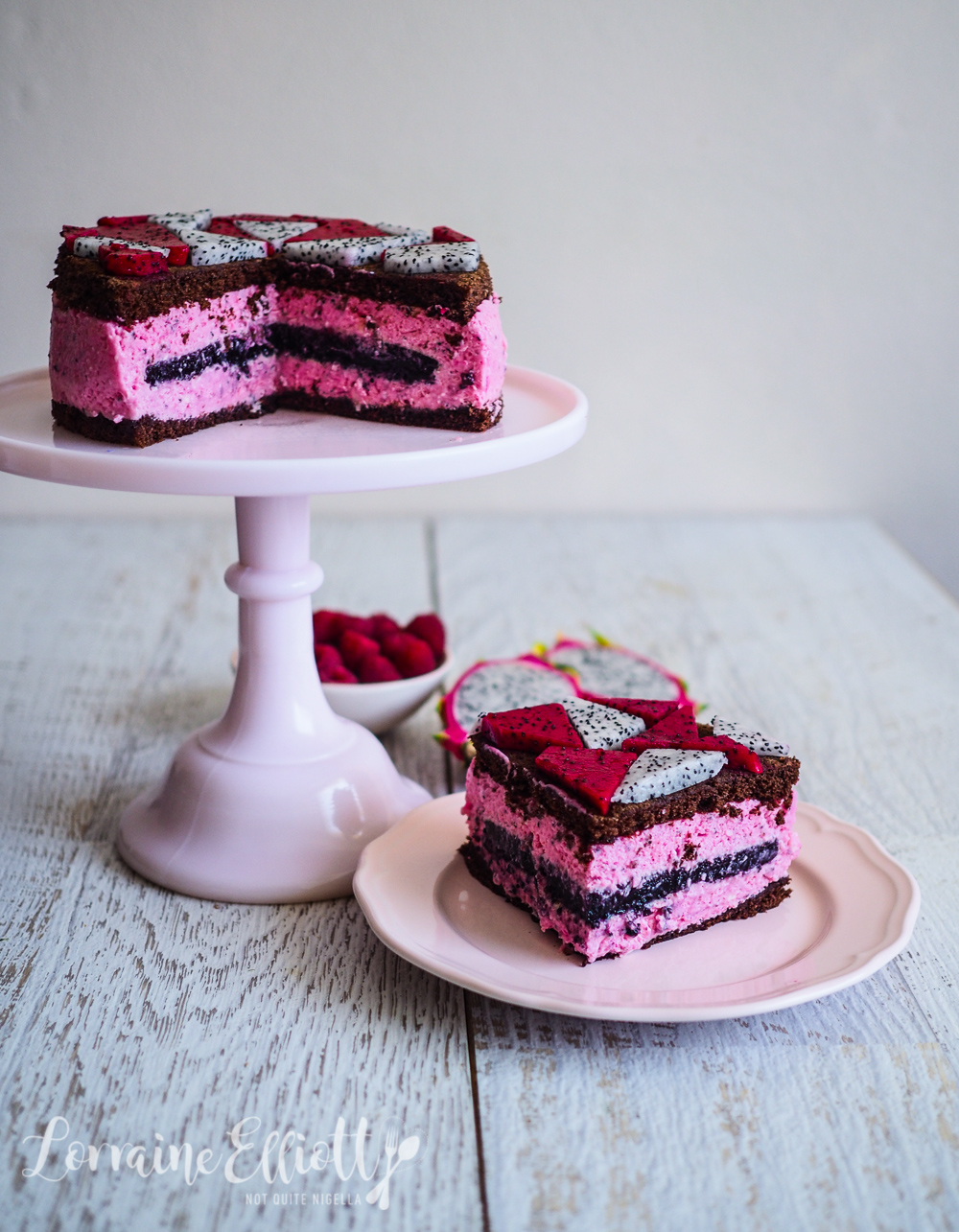 I had to go out so I cleaned everything up and put it all away to deal with later. The cake would have to wait (the curdled mousse was still delicious and Mr NQN ate it happily). I got ready and put on makeup and did my hair. I had already had a shower but I have this ritual that I always wash my feet before I get dressed because I like having clean feet when I put on my shoes (weird? TMI?). Anyway, I usually get into the bath/shower and turn on the bottom bath taps.

Except, because it was disaster day, I turned on the top taps. And I received a massive spray of water on my freshly curled hair. Remember that camera angle from the sky? Please repeat and loop.

After drying myself off and refusing the submit to the idea that it was in fact disaster day, I went out. Before I got home I bought cream to start the mousse layer all over again. I reached into the basket to put it in the fridge. The bottle was slippery with condensation and I dropped the whole thing on the floor. The top flew off dispensing about a cup of cream on the floor and under the fridge. It took so long to clean it up (it sounds stupid to say but cream really is thick and greasy!) and I sighed deeply. "I'm STILL making this bl*^dy cake!" I said through gritted teeth. 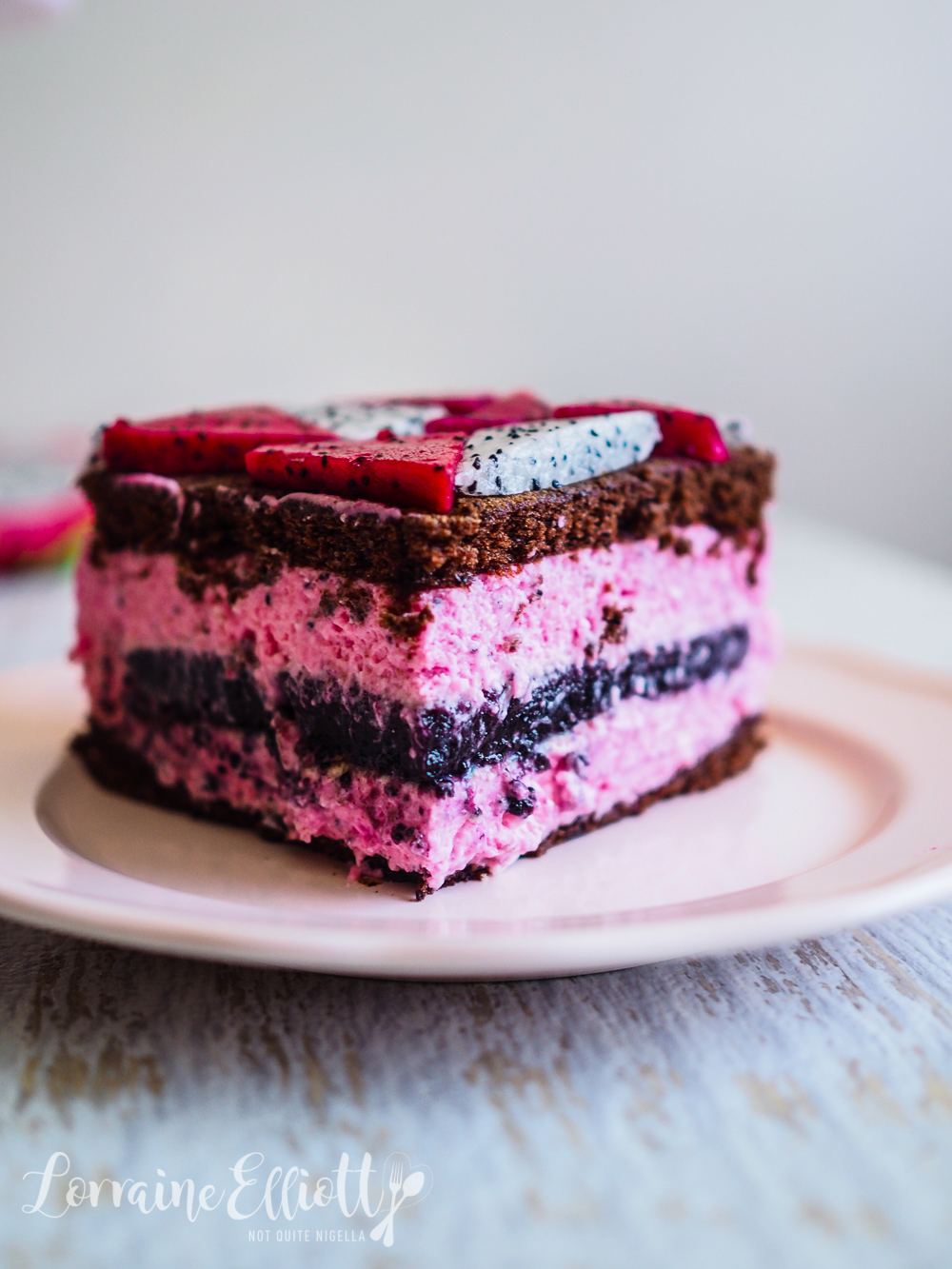 Thankfully this time round the cake worked. I say thankfully because I only have so much patience (and so much cream lol) but also because this is an absolutely beautiful tasting cake. The dragon fruit provides the colour and here I've combined it with raspberry and white chocolate so it has that dreamy fruity creamy combination. It's light as a feather and the surprise layer of jelly adds a burst of intensity among a light cake. Make it on those days when you've got time to make a show stopper cake! And watch out for disaster days ;)

So tell me Dear Reader, do you have any odd little rituals while you get ready like washing your feet? Do you believe that some days are disaster days? Do you like dragon fruit? 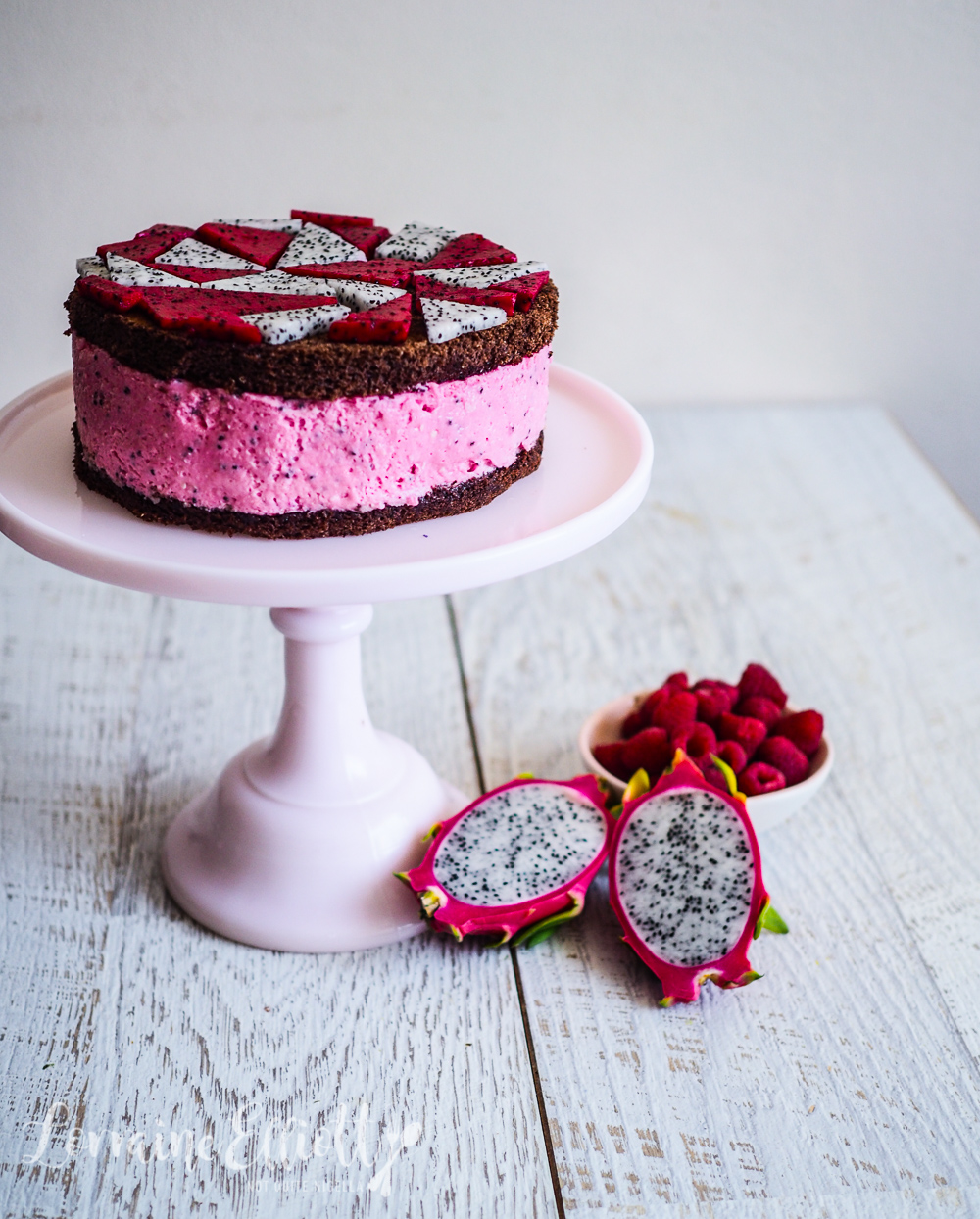 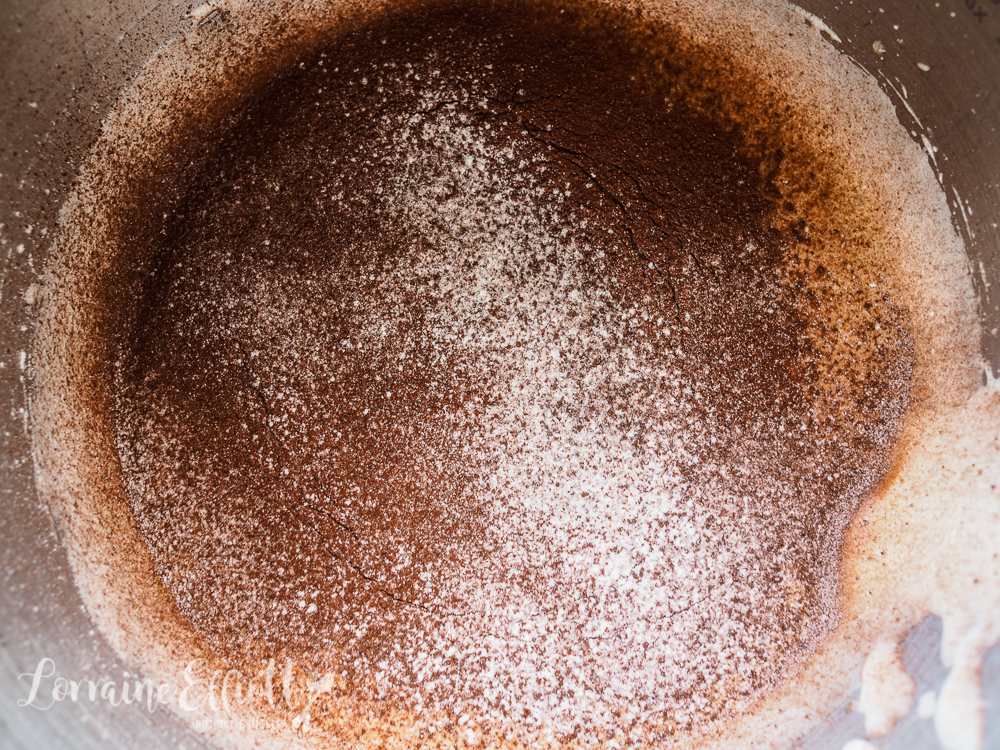 Step 1 - First make the sponge layers. Preheat oven to 210C/410F. Grease the base and sides of 2x20cm/8inch round tins. Whisk the eggs and caster sugar until tripled in size. Sift in the cocoa and flour and fold until well combined. Divide among the two cake tins and bake for 12-15 minutes until the centre springs back to the touch. Cool and wrap until needed. You can make these a day or two ahead. 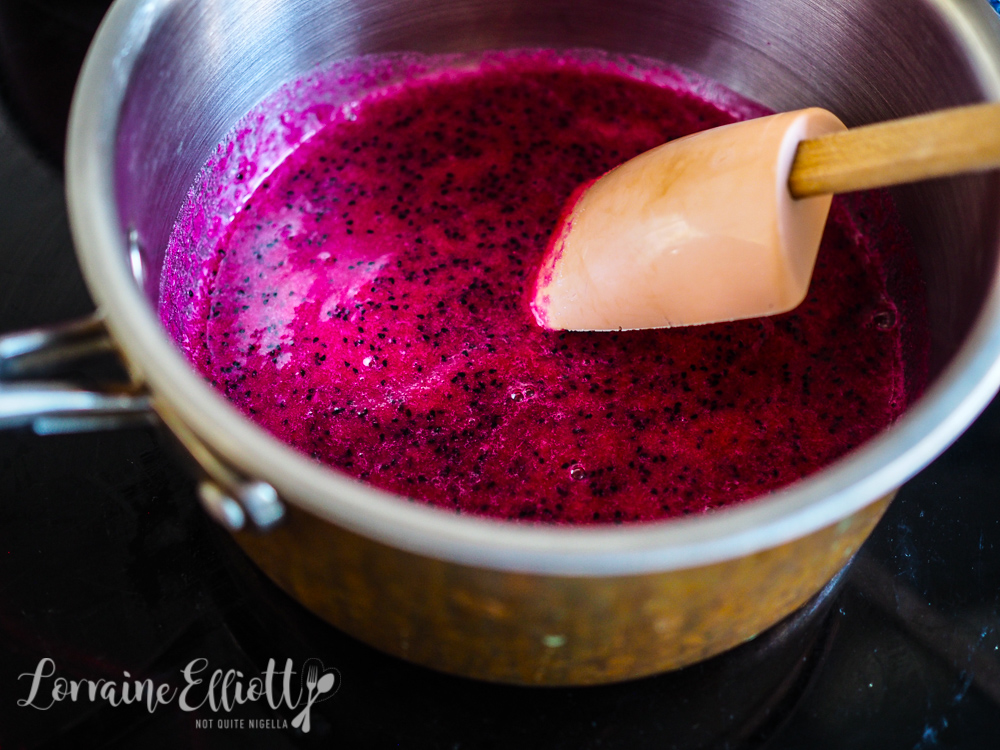 Step 2 - Make the jelly next. Grease a 10 or 12cm tin. Soak gelatine leaf in cold water for 5 minutes. Heat the dragon fruit puree with the sugar, water and raspberry essence. Squeeze the gelatine leaf and add to the mixture and stir through well. Pour into the greased tin and cool. Refrigerate until set.

Step 3 - Start assembling the cake. Place the cooled sponge layer on the base of a line springform cake tin. I trimmed mine a little but you don't have to do that.

Step 4 - Make the filling. First soak the 2 gelatine leaves in cold water for 5 minutes. Then place the dragon fruit puree in a saucepan with 1/4 cup of the sugar and cook for a few minutes reducing it so that it is syrup. Add the raspberry essence and then squeeze the gelatine sheets and add it in stirring well. Set aside to cool slightly but not long enough so that it sets. 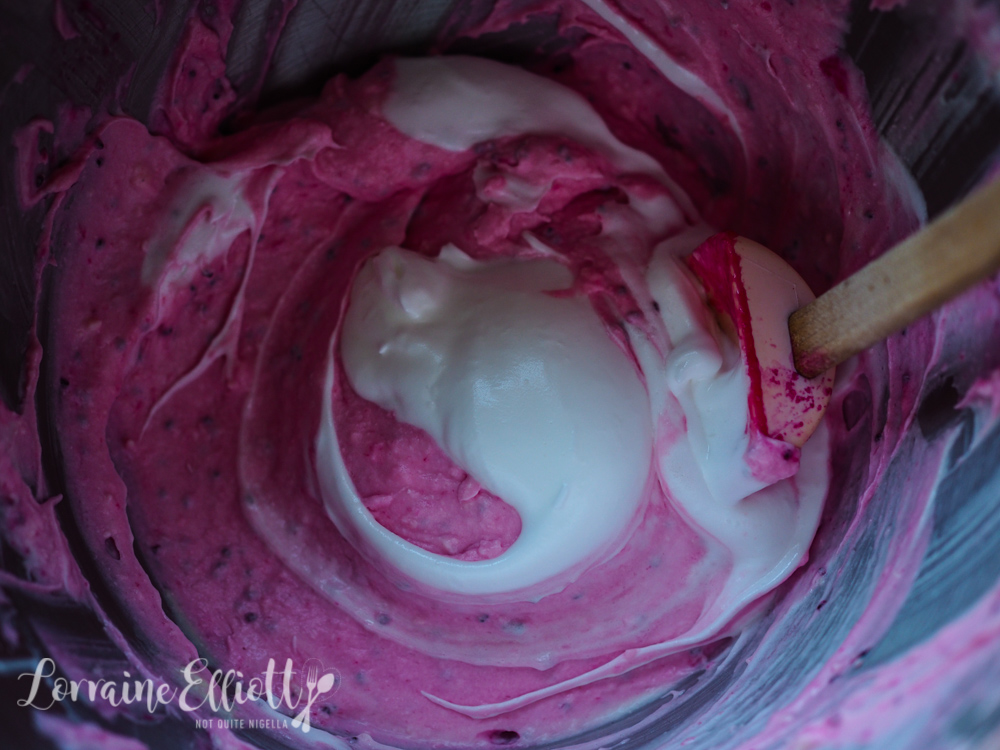 Step 5 - Whisk the egg whites until you get soft peaks. Then add 1/4 cup of the caster sugar and whisk until you get stiff peaks. Place in another bowl and set aside. Then whisk the cream and coconut together until thick and fluffy. Whisk in the melted but cooled white chocolate. Then using a spatula, fold in the egg white meringue and the cooled but not set dragon fruit puree. Spoon half of this on the base on the cake. Chill in the fridge for 30 minutes. 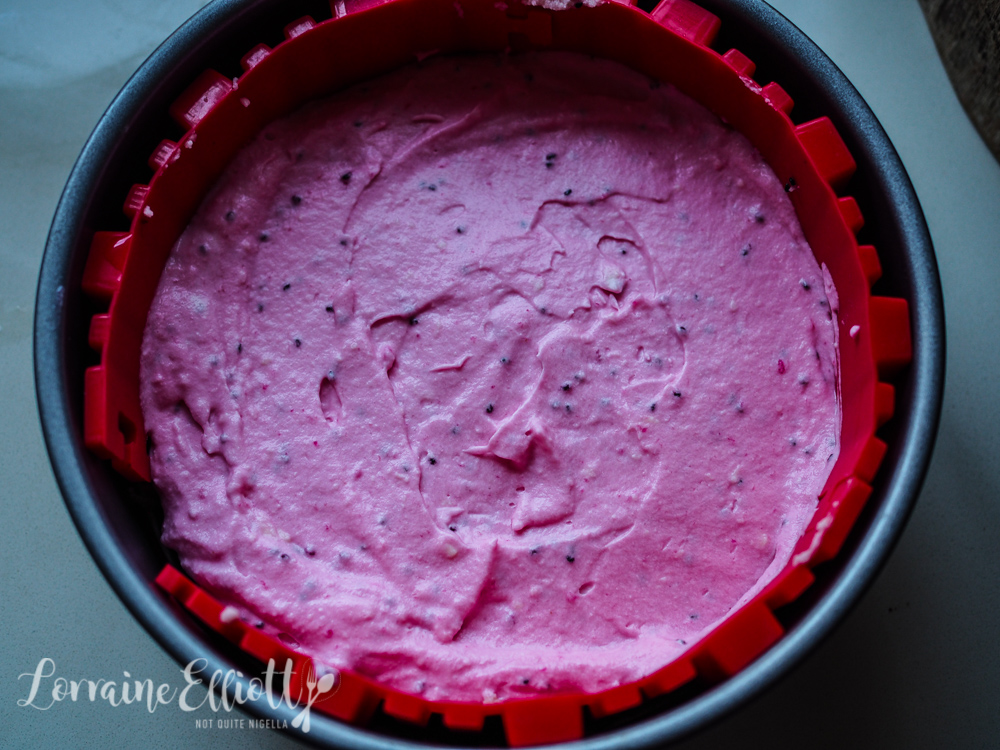 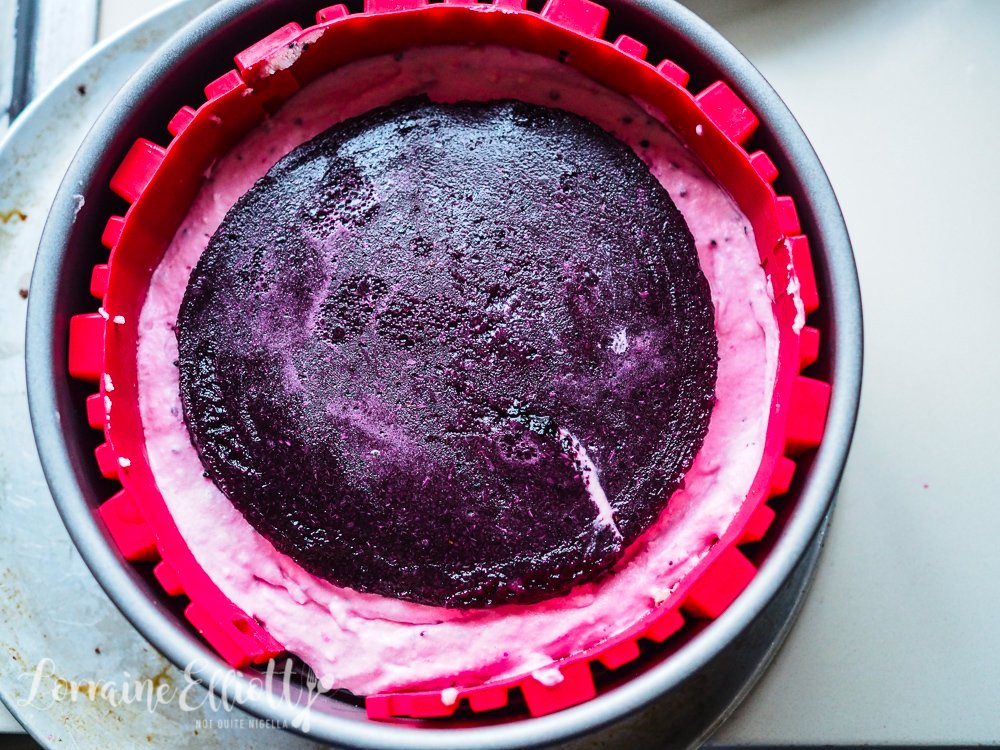 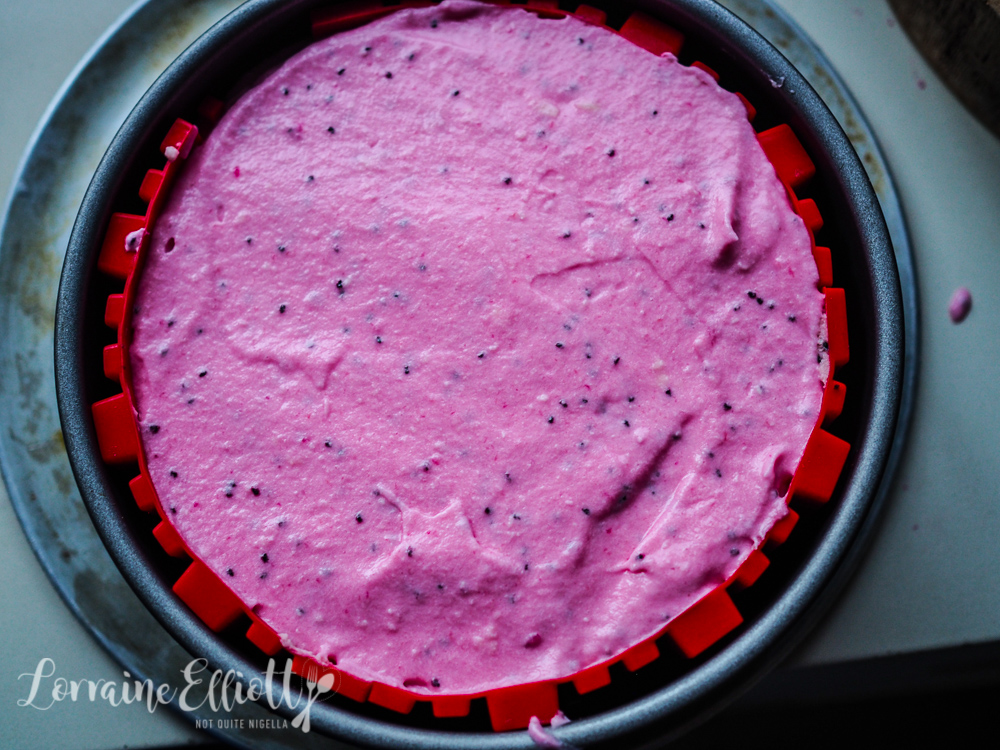 Step 6 - Place the jelly insert on top of this and then spoon the rest of the mousse on top. Allow to set in the fridge and then place the other chocolate sponge on top. 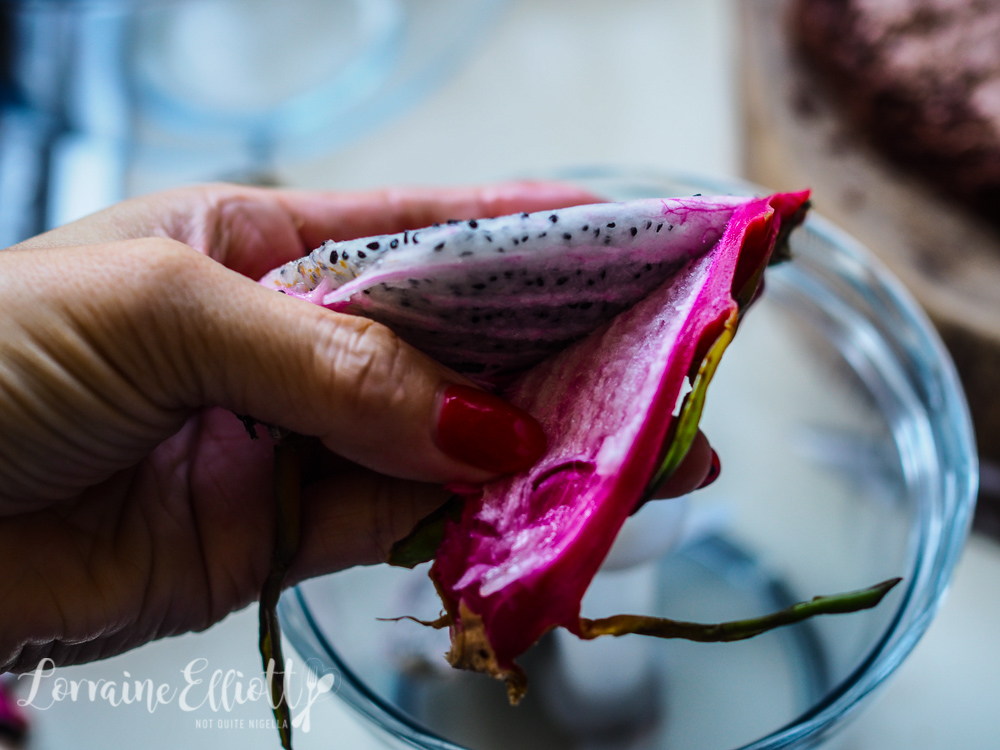 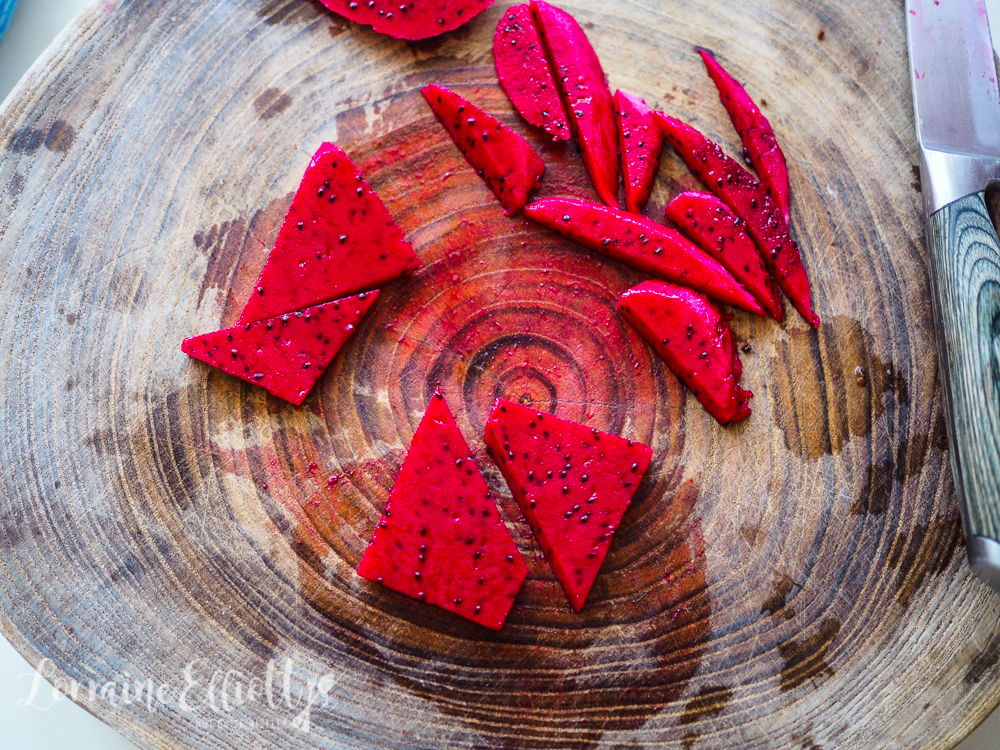 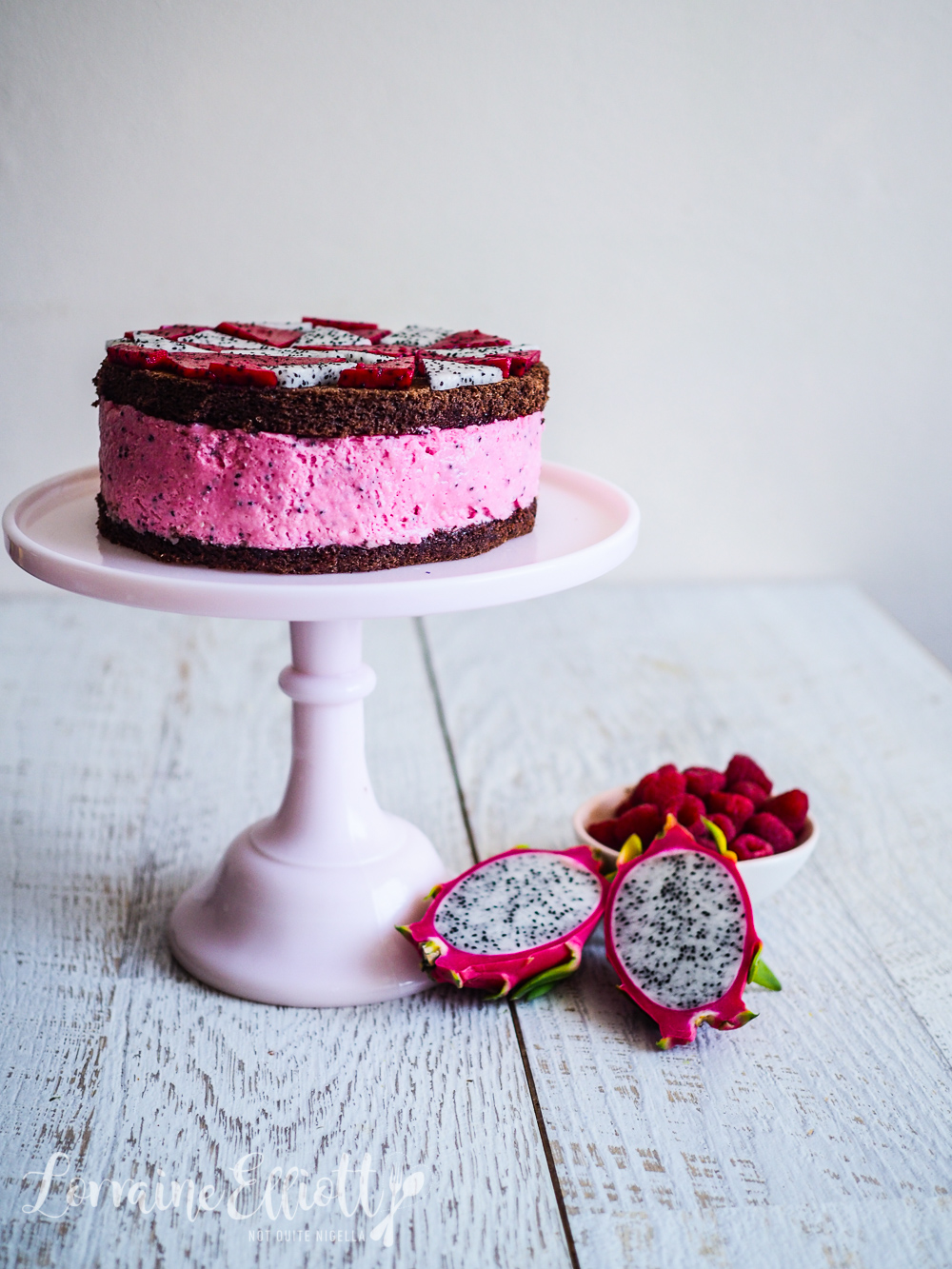