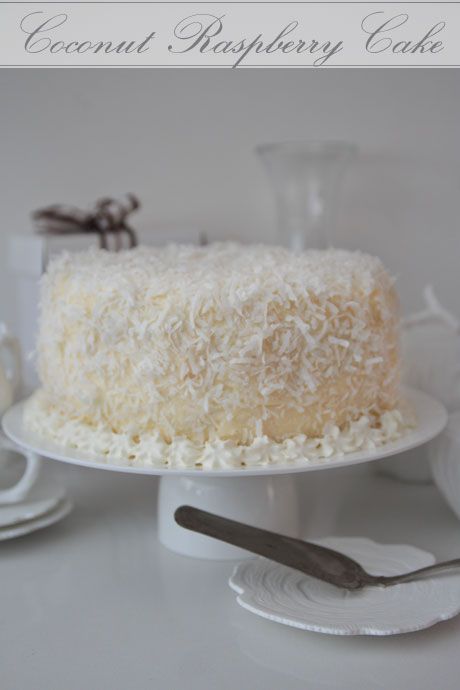 When I was a teenager I went through a phase when I would only eat yogurt and strawberries. That's all. And I suppose I'm just lucky I wasn't malnourished. Even today I go through food fads where I stockpile a certain item sweeping up packets of it from the store shelves and packing my pantry tight with them. Mr NQN just takes a look at the trolley and gives me a look without saying a word. 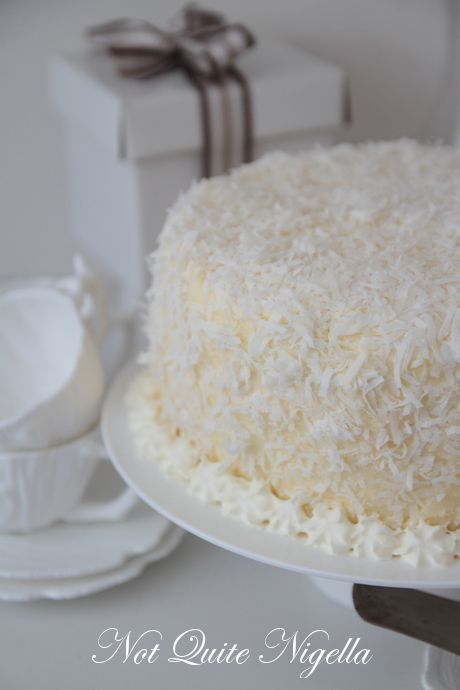 My latest obsession is coconut. Apropos of nothing, one day I woke up and decided that I didn't just like coconut. I loved the damn stuff. So I bought three kinds of coconut (desiccated, shredded and moist), became anxious when I couldn't get coconut flakes from the stores, and bought up cans of coconut cream. It was coconut and Thai dishes for days and cakes all were filled or topped with coconut. 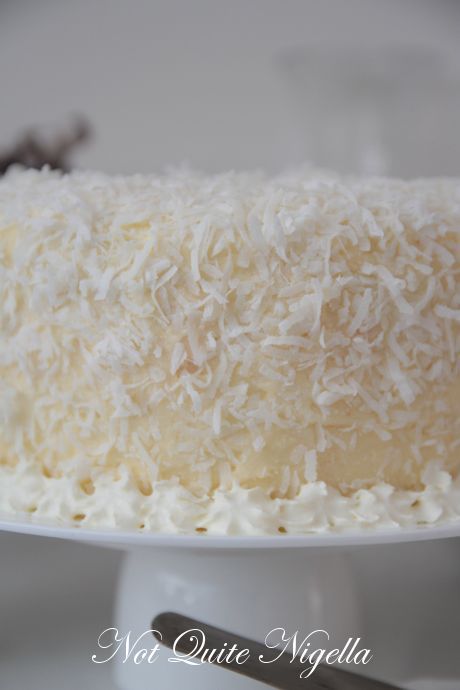 I love friends and family member's birthdays as there is always the opportunity to make a new cake. Mr NQN's sister Araluen was having her birthday so I decided to make her a raspberry and coconut cake. I knew the family were mad on coconut. In fact Mr NQN's mother who is fond of peddling the latest hippy love tokens and products has been espousing coconut oil for a couple of years now. Along with coconut oil which was supplied by Mr NQN's naturopath father, her ex, she  bought a contraption which was like a plastic mouth guard. She was so excited when she received it in the mail as it seemed like a miracle product. She spun off a list of its attributes. It could reverse Down Syndrome, cure cancer, improve posture and the most important thing and the reason why she bought it, it would help the user to shed lots of weight. Mr NQN's father sold it to her for $125... ;) 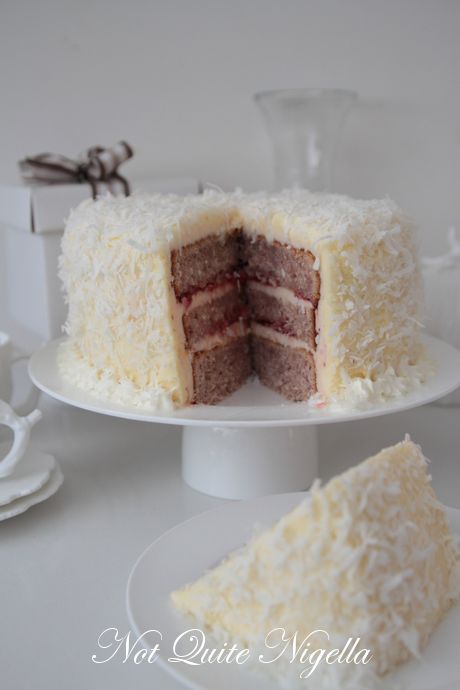 Anyway...where was I? Oh yes the cake. I had a bag of frozen raspberries I wanted to make a layer cake as I like making layer cakes for birthdays as they look a bit fancier. I wanted it to be moist-one thing about coconut cakes is that they are sometimes a bit dry (think lamington) so I played around and I arrived at a light, moist raspberry and coconut cake sandwiched with cream cheese icing and tangy raspberry jam and then covered in more icing and shredded coconut.

So tell me Dear Reader, what ingredient or dish do you love a lot lately? Apart from coconut, I'm loving soups and stews at the moment! 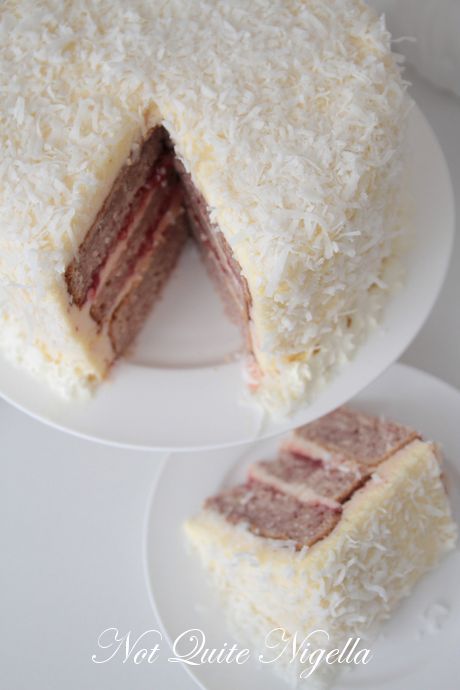 Makes a three tier cake, divide into three if you want a regular sized cake

Step 1 - Preheat oven to moderate 180C/350F. Line 3x 20cm cake tins with parchment on the bottom and sides. Beat butter, sugar and eggs in small bowl with electric mixer until light and fluffy. Stir in sifted flour, coconut, coconut milk or cream and frozen raspberries. Divide mixture among the three tins and bake for 30-40 minutes until a skewer inserted in the centre comes out clean. 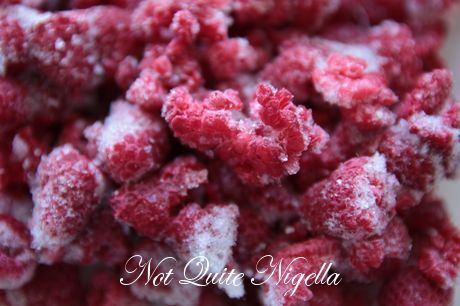 Step 2 - While the cake is baking and cooling make the icing. Beat butter, cream cheese and coconut essence in a bowl with electric mixer until light and fluffy, gradually beat in icing sugar.

Step 3 - Cool the cake completely and trim the tops if you get any peaks on top. Remove the parchment and carefully turn the cakes upside down so that the smoothest side (the base) is facing upwards. Spread the bottom cake with the raspberry jam (I first added cream cheese icing and it's up to you whether you want to do this) then place the middle cake on top of this and then spread the jam on the second layer and then place the third layer on top.

Step 4 - Make a thin crumb coat. Take out one quarter of the icing and place in a separate bowl. Using this icing, spread a thin coat of icing around the cake with a palette knife to pick up any stray crumbs. It shouldn't be too thick and you should still be able to see the cake through the icing. Refrigerate for an hour or so. 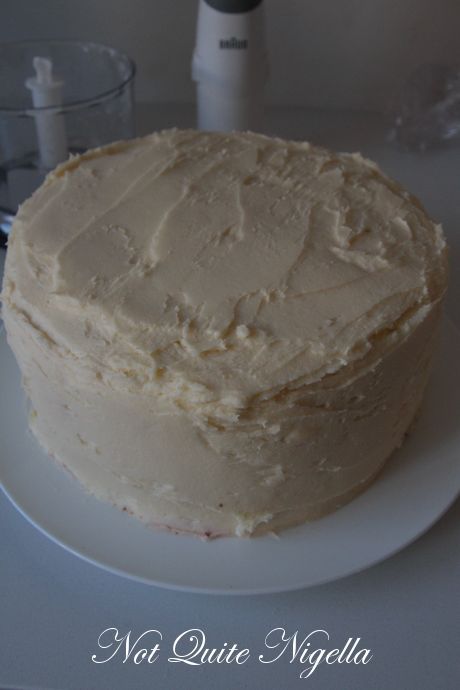 Step 5 - Do the final layer of icing and spread icing around the cake. After this layer you shouldn't see see any cake. Then sprinkle shredded coconut on top and around it - I found it easier to press the coconut onto the sides. 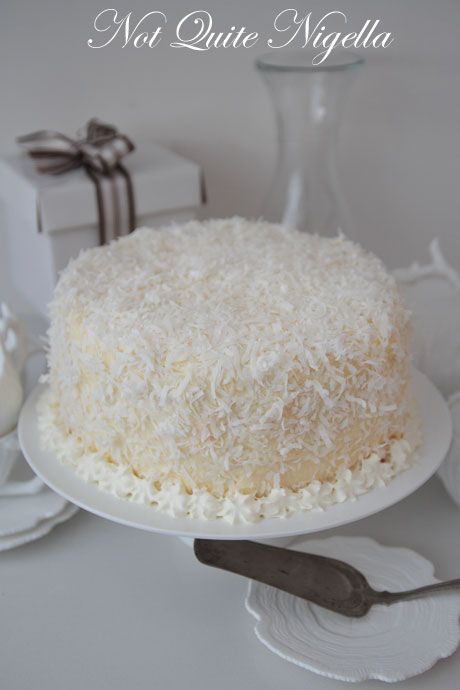