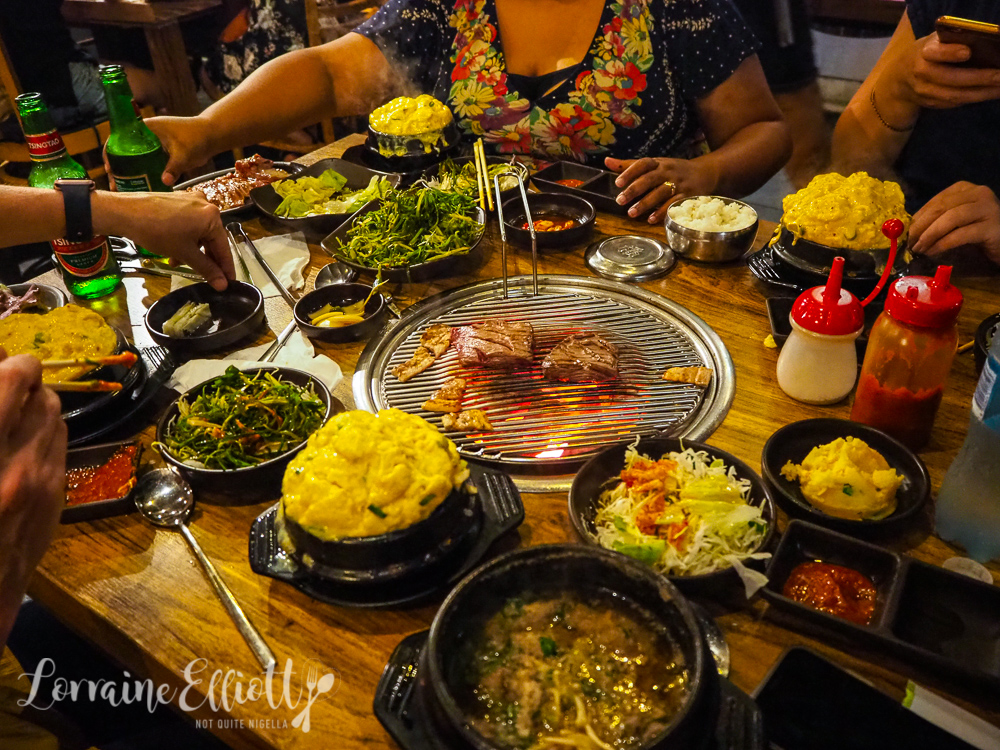 If you had asked me a year ago about my perfect Saturday night it would have been simple: dinner out with my nearest and dearest. But now I have something that I can add to that: karaoke. What started off as a conversation with Ivy and Ryan about Korean barbecue and karaoke morphed into something else as Mr NQN and Ryan excused themselves on the grounds that they don't sing. It then became a girls night out with Ivy, Louise, Girl Next Door and I and also involved a lot of delicious Korean food at Yang San Park. 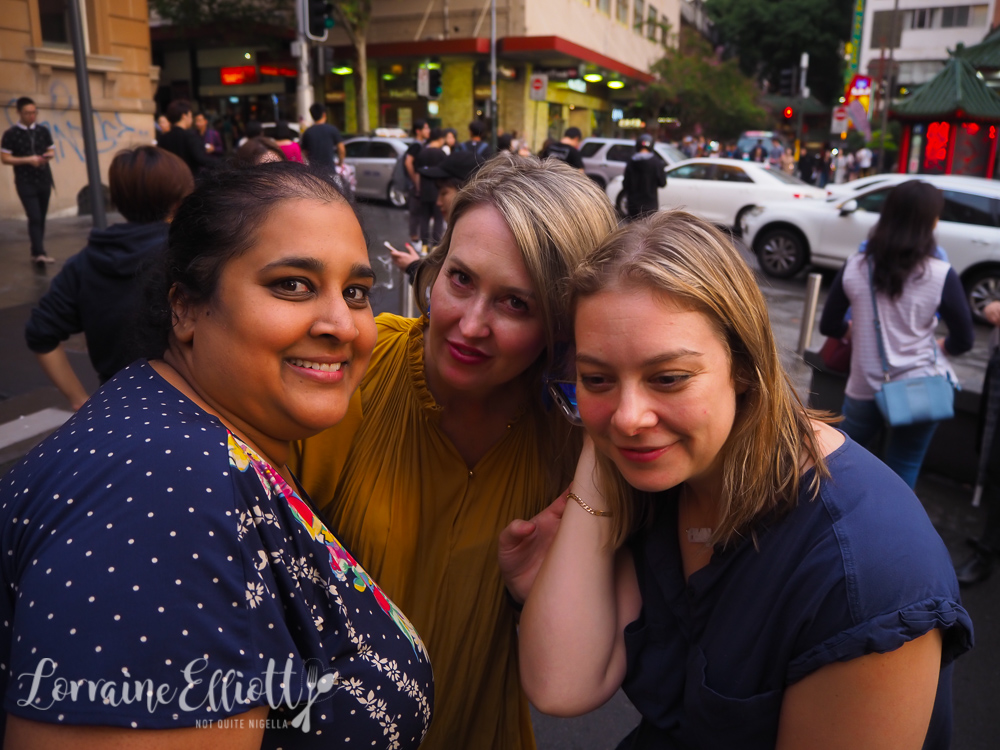 Sound check on our karaoke videos

After a couple of happy hours at a slightly dodgy, sticky-floored karaoke bar that smelled like stale cigarette smoke we emerged from our subterranean, uber air conditioned quarters into the humidity of steamy George Street. It was a five minute walk to Yang San Park. 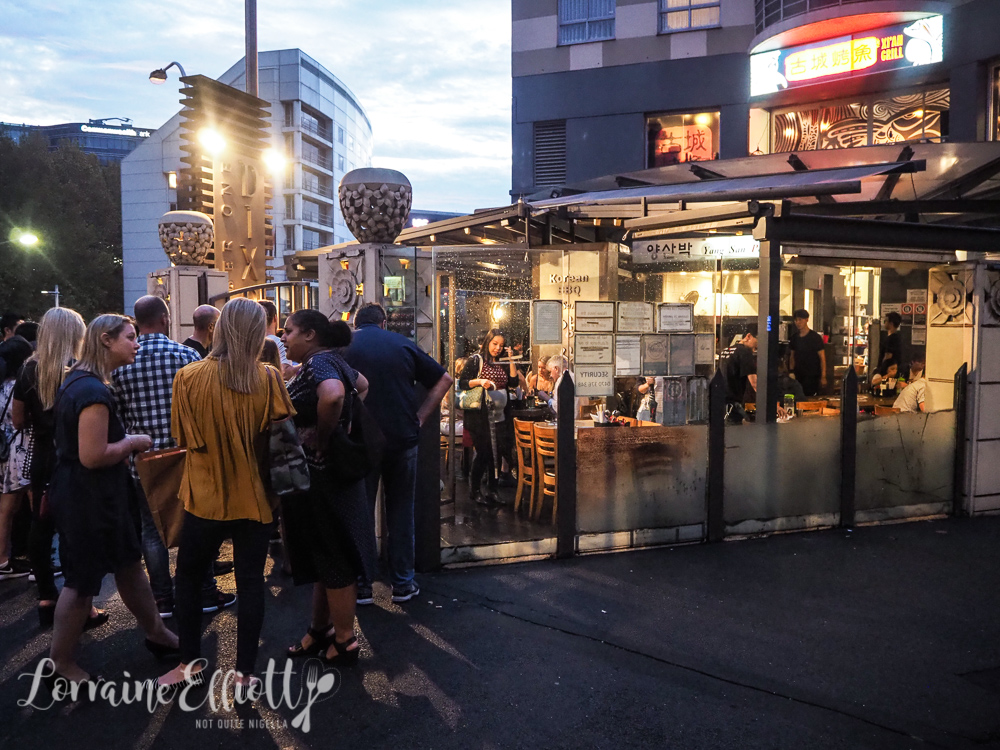 Our plan, because they don't take bookings, was to arrive early. But even arriving at 6:30pm isn't early enough as there is already a crowd outside. You put your name down with the staff and they estimate the time it will take with uncanny accuracy. We waited 20 minutes before our name was called and we were led into the smoky, steamy plastic sheet covered restaurant. 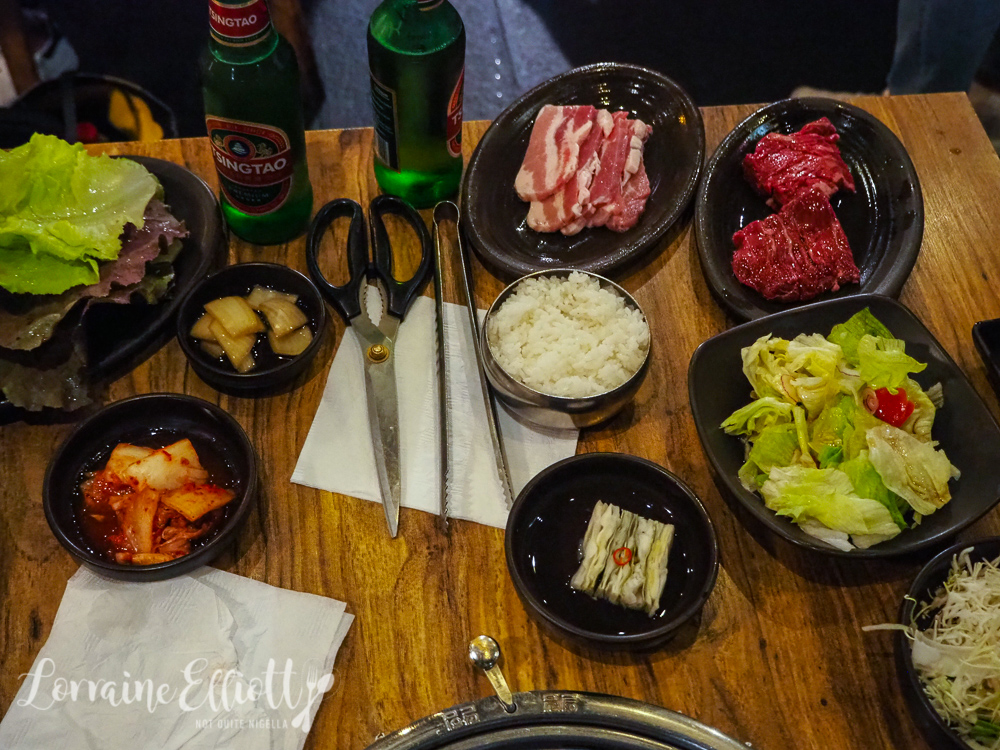 The meu is a simple double sided laminated one. The Yang San Park set menu is very good value. You get a taste of pork belly, thin skirt, marinated pork rib, marinated chicken, marinated beef rib and a cast iron steamed egg pot per person for just $26. And because we can't resist and because the prices are so very reasonable we add a few more things into the mix. 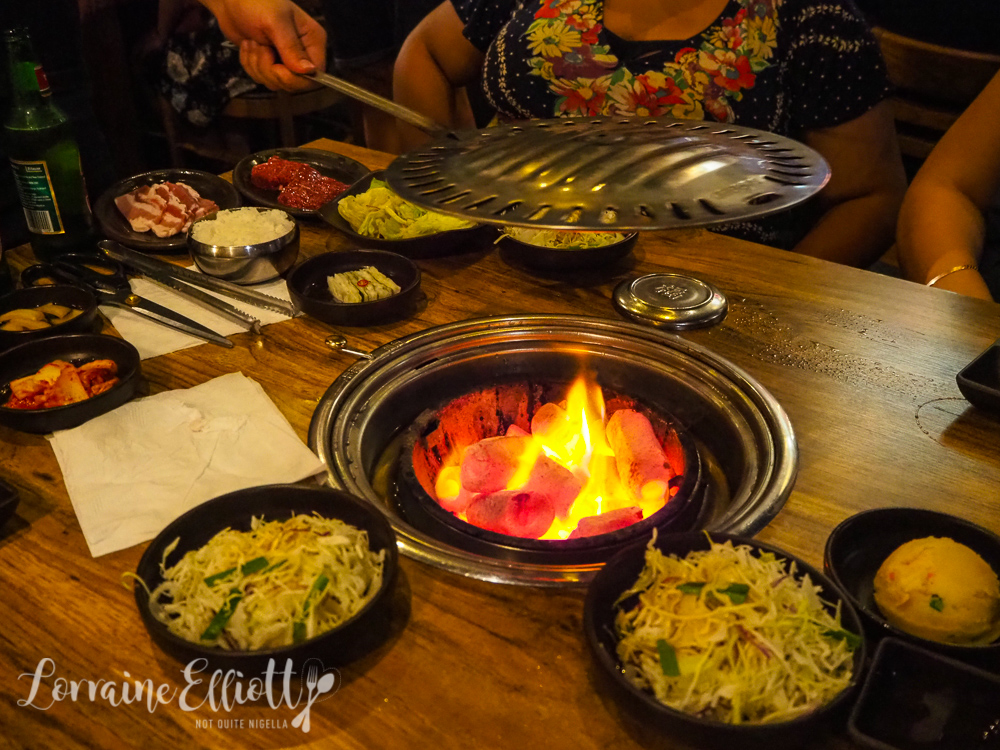 The key difference between Yang San Park and other Korean BBQ places is that they will cook the meat for you. The bring the hot charcoals over to the table and then a tray of banchan arrives with kimchi, onion, potato salad and some lettuce leaves for the bbq meat. It all happens very quickly. Then cook the meat, go away and then come back and flip it but they don't do it obtrusively so that you feel like there's someone else sitting at your table. 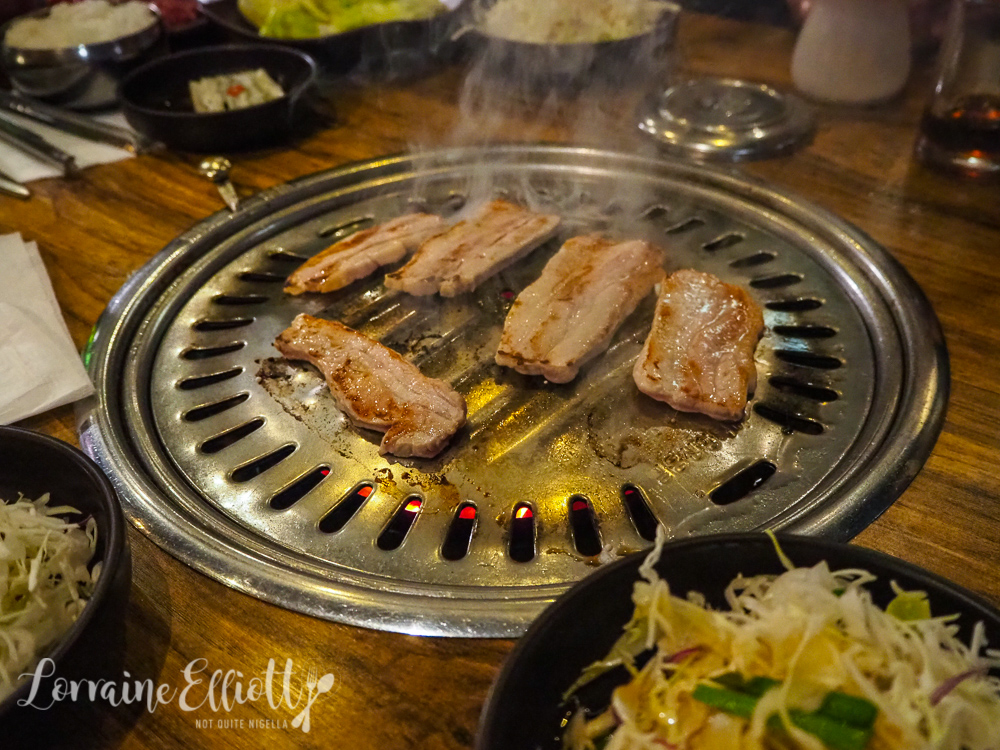 Service is hilarious from our waiter. He seems to delight in our enthusiasm for the food and he attends to our barbecue well. The meats are all very good and cooked until caramelised yet still juicy. 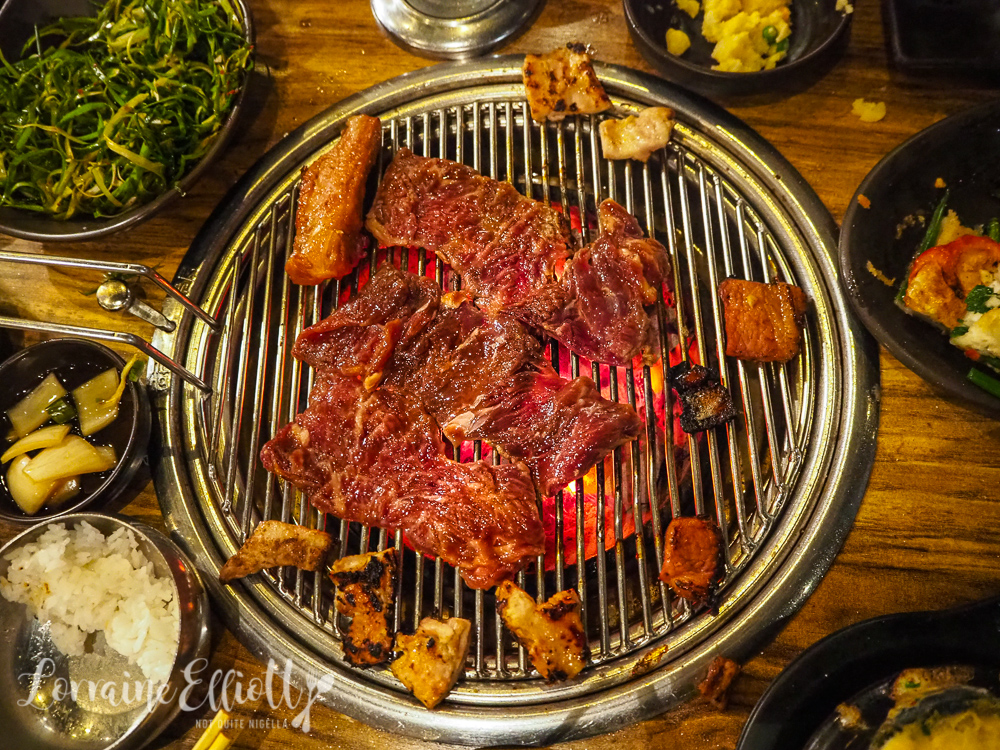 My favourite meats include the two porks, the belly and the rib as well as the marinated beef rib. I will say that the meat isn't in huge portions but this wasn't an issue because we had other dishes. I think adding at least one other dish might be a good idea if you get the set menu. 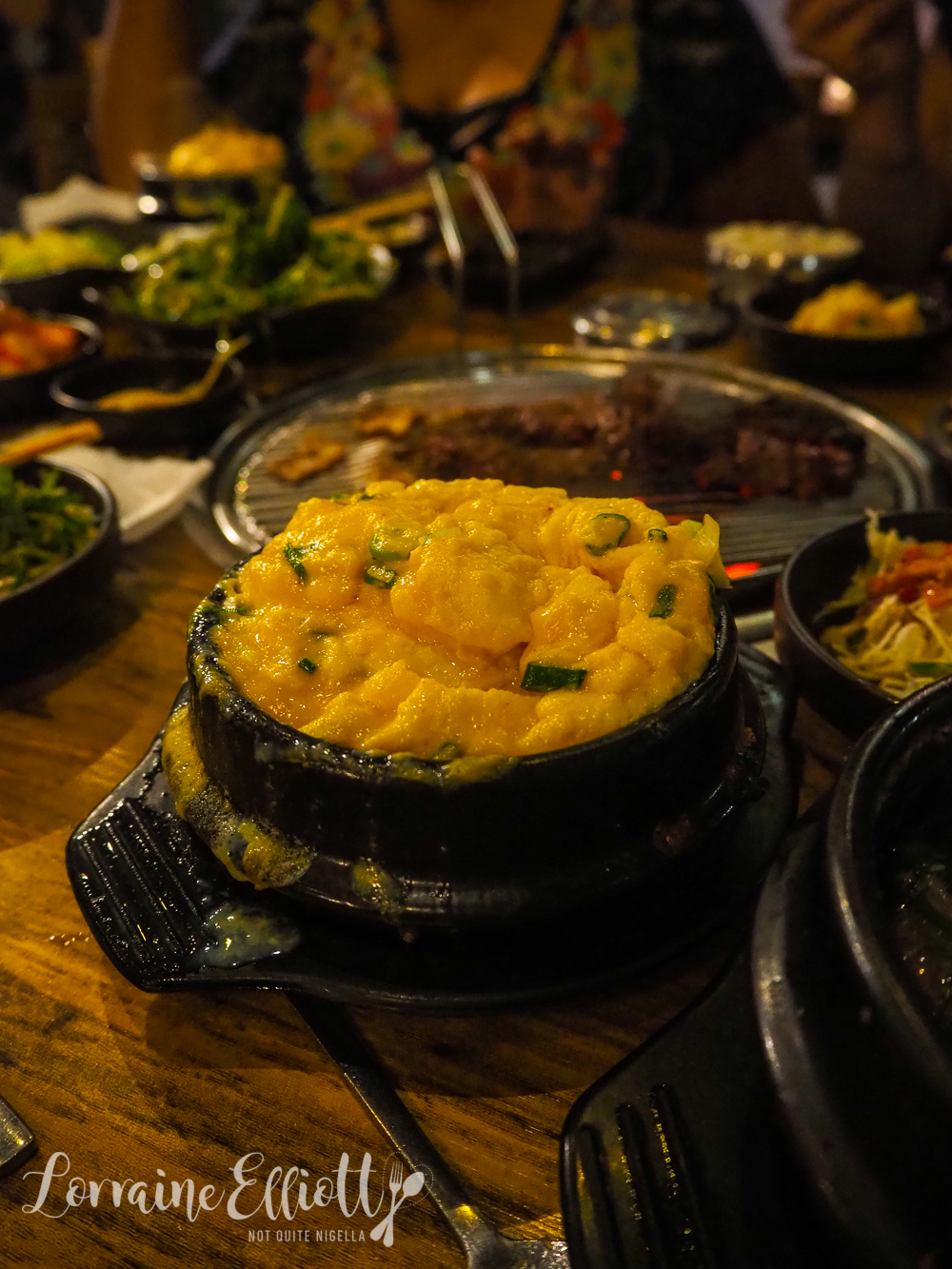 As for the egg souffle, it comes out in a rather attention stealing manner. It wobbles, it jiggles and it is a delightful cross between an omelette and a souffle with shallots. 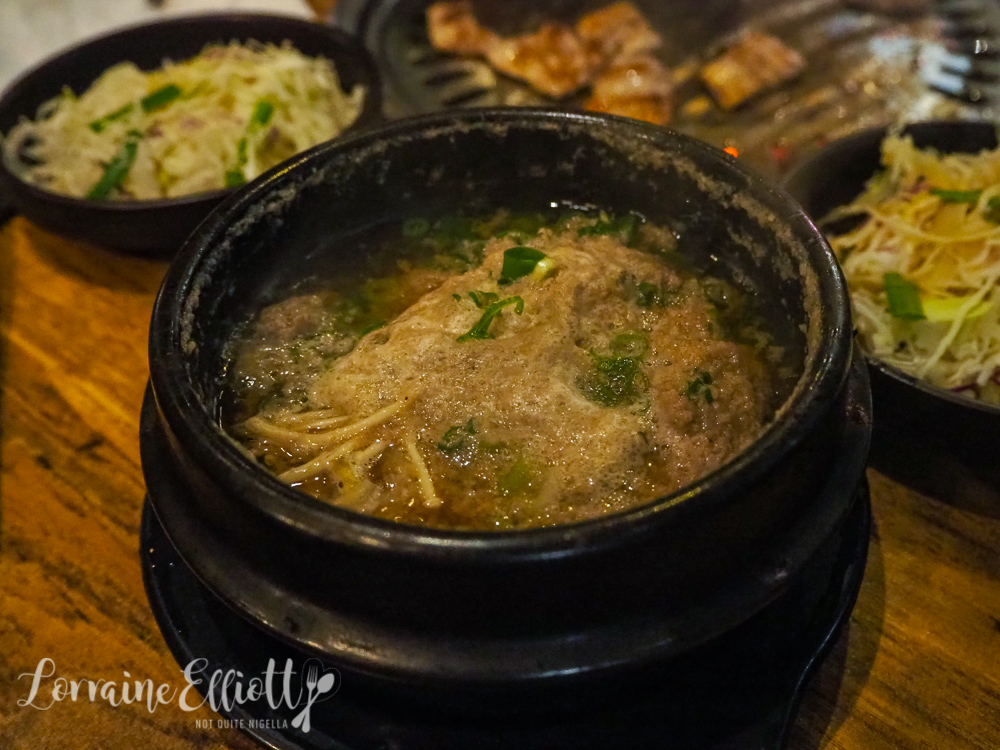 I have to admit that I was a bit surprised when this arrived because it looked nothing like the menu picture. But what it lacks in looks it more than makes up for in taste. As much as I liked the meat and all the sides, I adored this deeply flavoured beef bulgogi hot pot. There are enoki mushrooms, sweet potato noodles, soft beef pieces and soup. 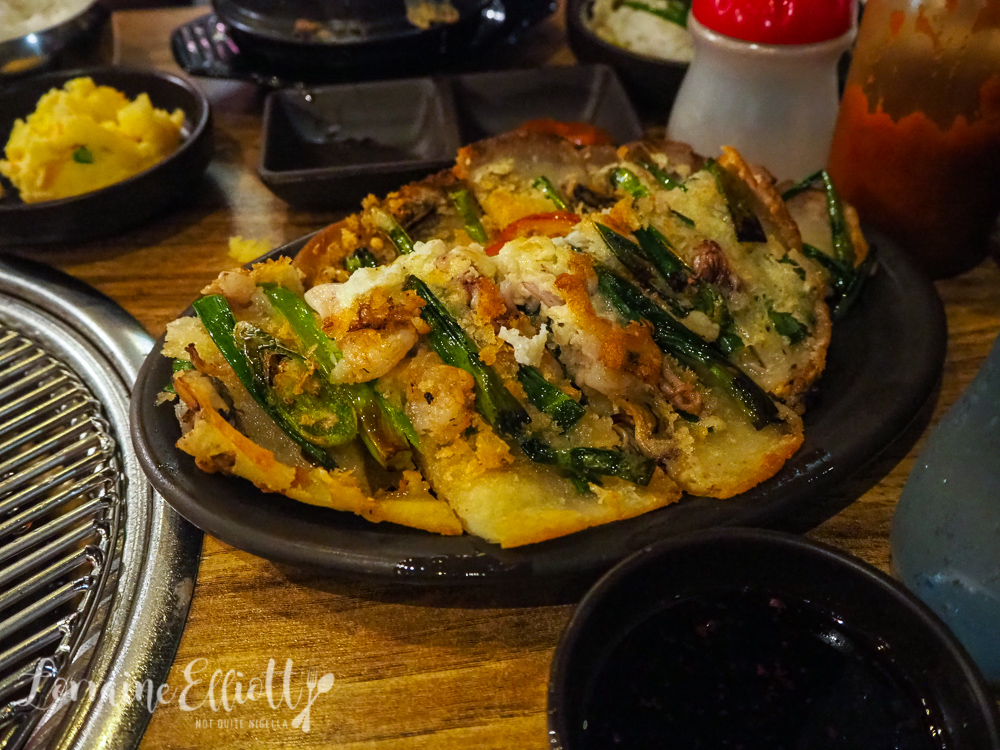 I also adored this succulent and crispy seafood pancake with plenty of seafood and lovely crispy edges. In fact I may have eaten four pieces of this I enjoyed it so much. 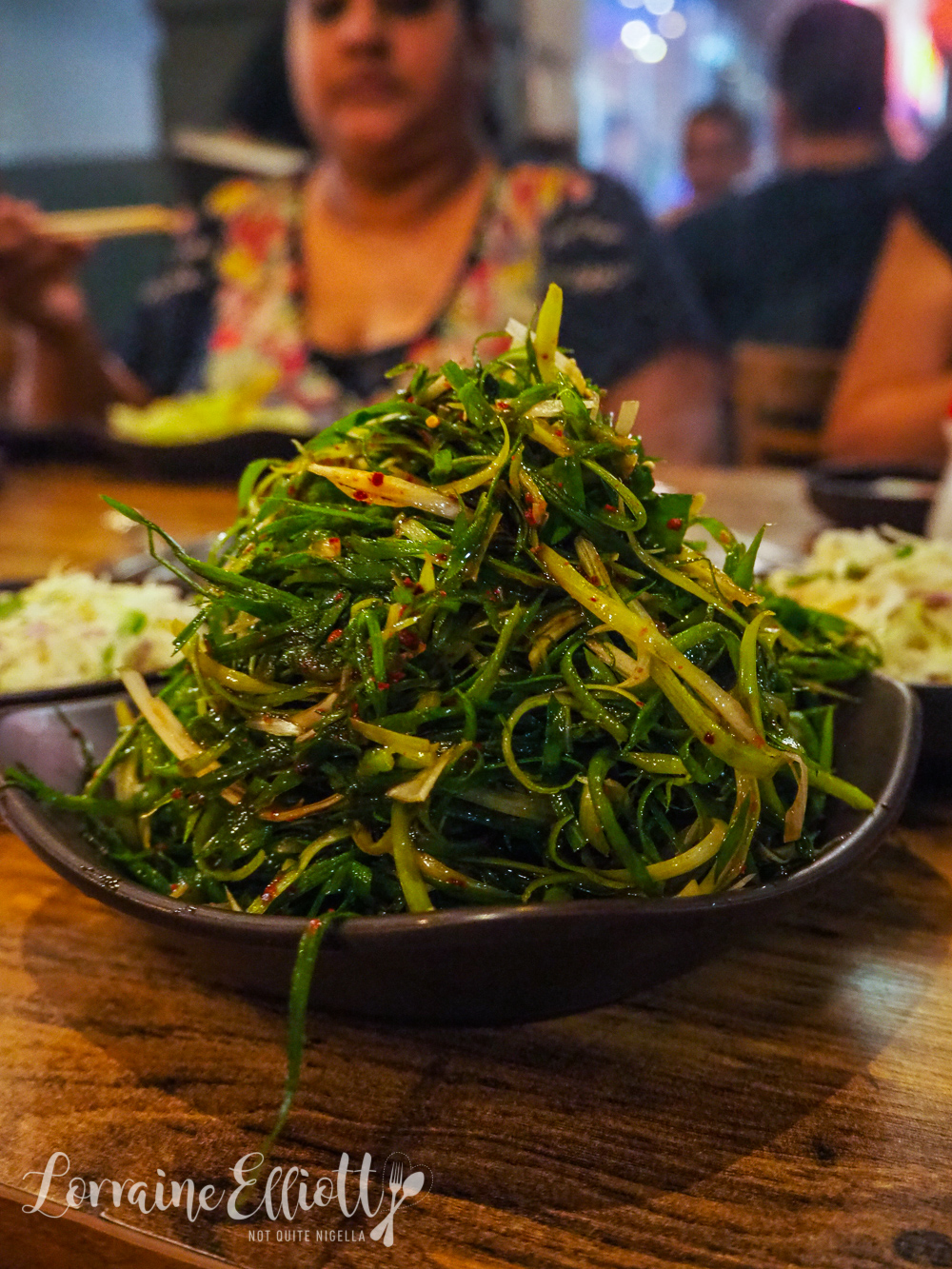 This shallot salad was a source of concern for our waiter. He was really worried that we wouldn't like it and we assured him that he are in fact Korean Karaoke singers on a break (our group name: lukewarm sex chocolate, derived from Sexual Chocolate from one of my favourite films Coming To America). It turns out to be a great salad to help cut through the richness of the meat. It's slightly spicy and sweet with a vinegar based dressing and the shallots are quite mild, as if they were soaked in water to remove any sharpness. 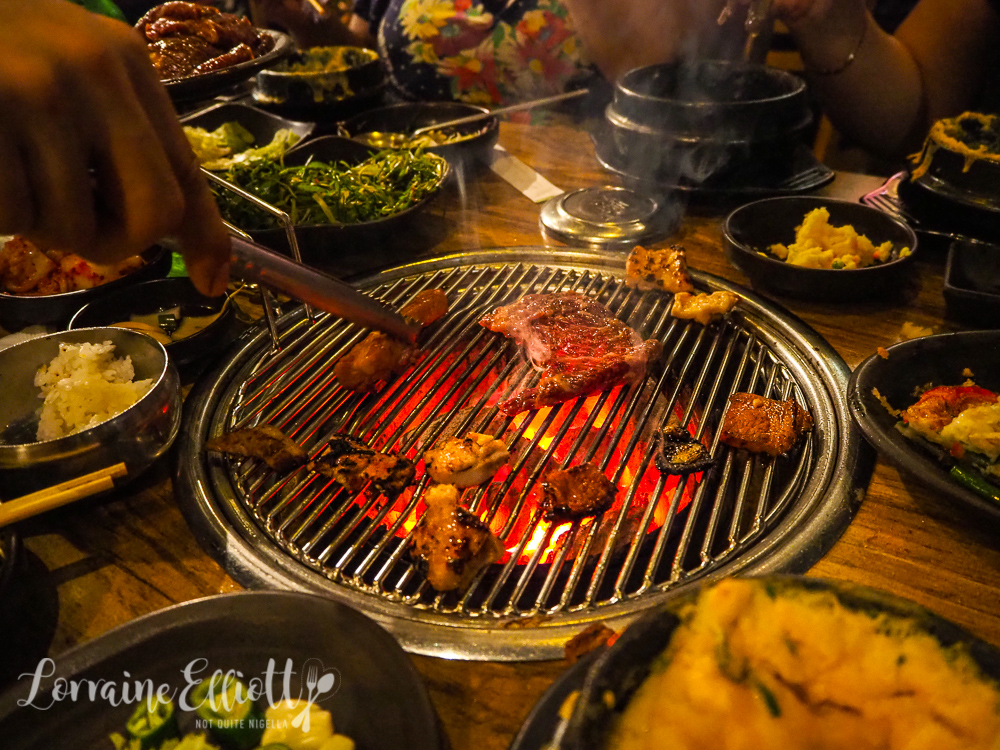 There's no dessert on the menu and besides which we have eaten our fill for dinner with our extra dishes. They tell us that there's also a $10 discount if you pay cash! It's tough to beat that sort of Saturday night...

So tell me Dear Reader, what is your idea of a perfect Saturday night? And have you got a band name for you and your friends? And do you usually pay using cash or credit card (I only ask because I never seem to carry cash!)?