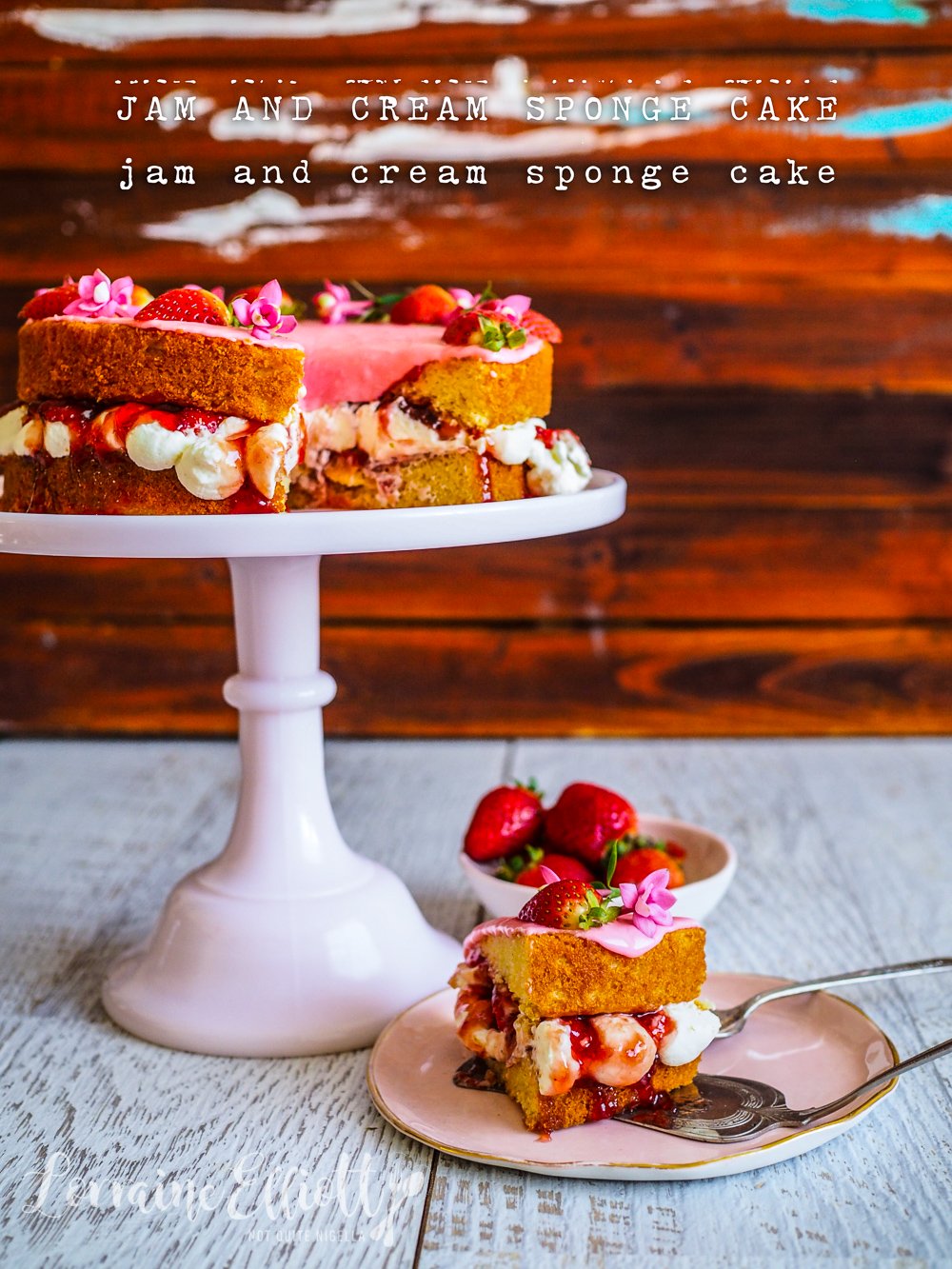 This cake is my dream cake as a child. A light, Victorian sponge cake sandwiched with strawberry jam and vanilla whipped cream with a hidden surprise of sliced strawberries. I called her Jane (the name I wanted as a child).

I didn't have time this year to make my cake as I just arrived back from Chicago. I made this a week following my birthday for a week long celebration and I chose this cake because I love classic jam and cream sponge cakes. I still have fond memories of my pink icing topped sponge cake as a child. There were no amazing bakeries then and a black forest cake was considered fancy and a jam and cream sponge was birthday worthy. 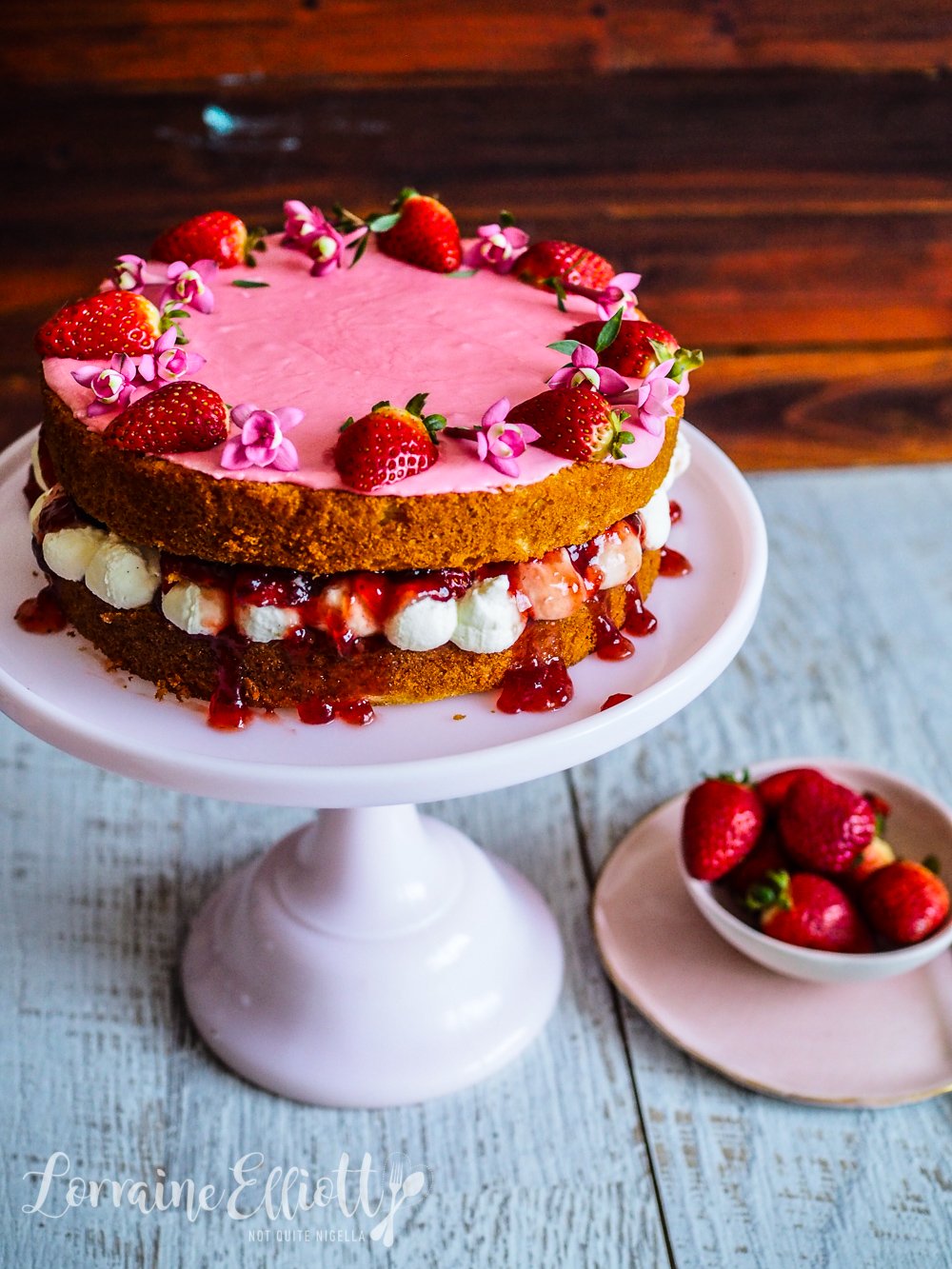 Mr NQN was chatting to my brother in law Laporello who is married to Mr NQN's sister Amaya. Laporello was talking animatedly about something and it took me a while to understand what he was saying. A week before he was at work as a graphic designer where he was trying to explain a concept of redesigning work processes and it's relationship to flat earth when his colleagues all huddled together to have a discussion and then they called health services and had him committed for a psychiatric evaluation. 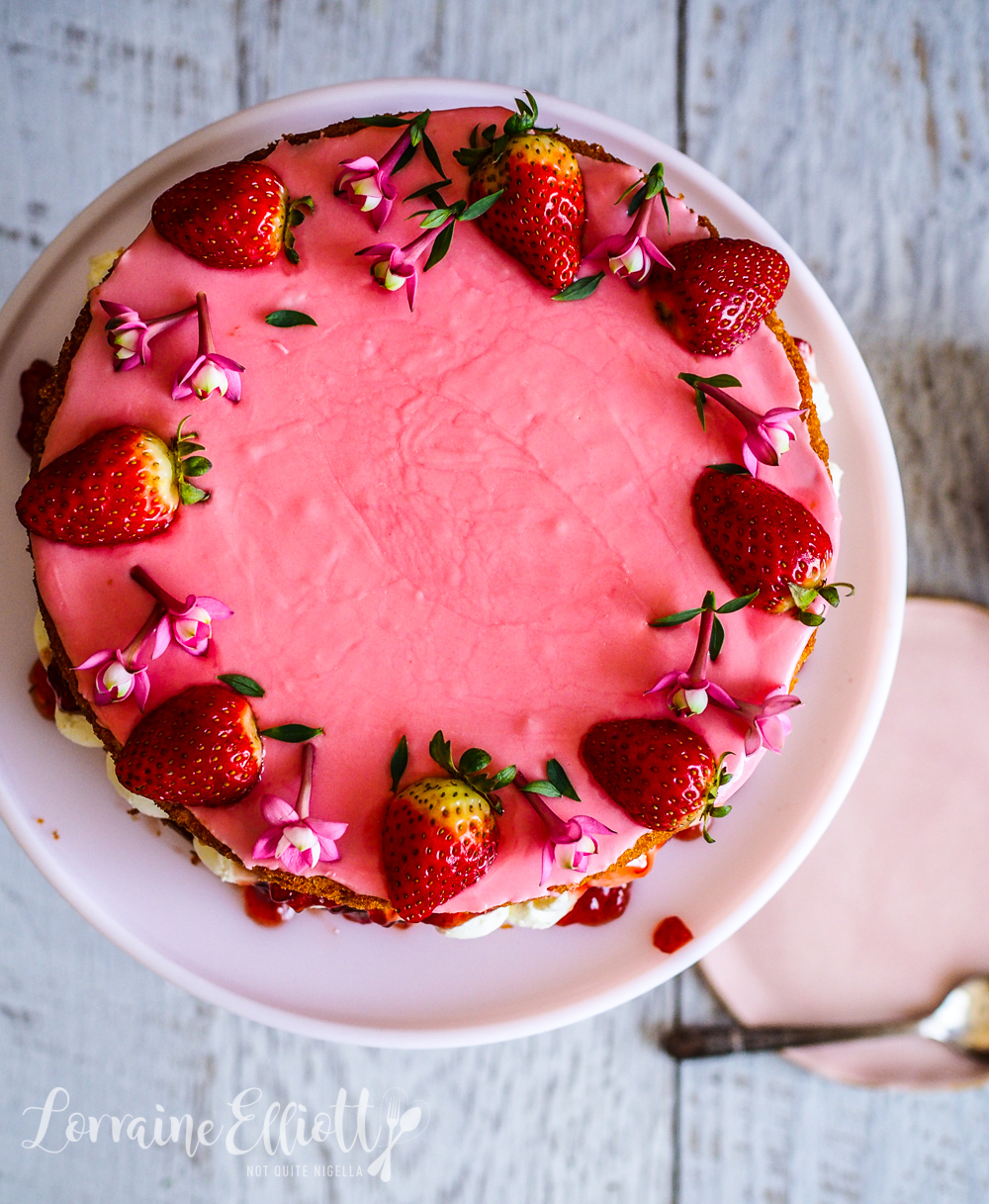 My jaw dropped. I always knew that Laporello had dark times. He had fought in the Croatian civil war and I knew his first marriage had not ended well. He was prone to some outbursts of frustration but so did I because when you deal with the Elliotts, you realise that they live on another planet and I sometimes lose it with them too (we didn't see them for three years because of this and I'm not allowed to talk about most of it!).

"Yeah I lost it at work," he said simply. He was transported to the local hospital and then after a long wait and seeing doctors he was allowed to go home. Amaya called Tuulikki who spent the weekend with them. Now Tuulikki has many good qualities but staying calm is not one of them. She's Chicken Little in The Sky is Falling story and it didn't help his state and by Monday they had called for help. 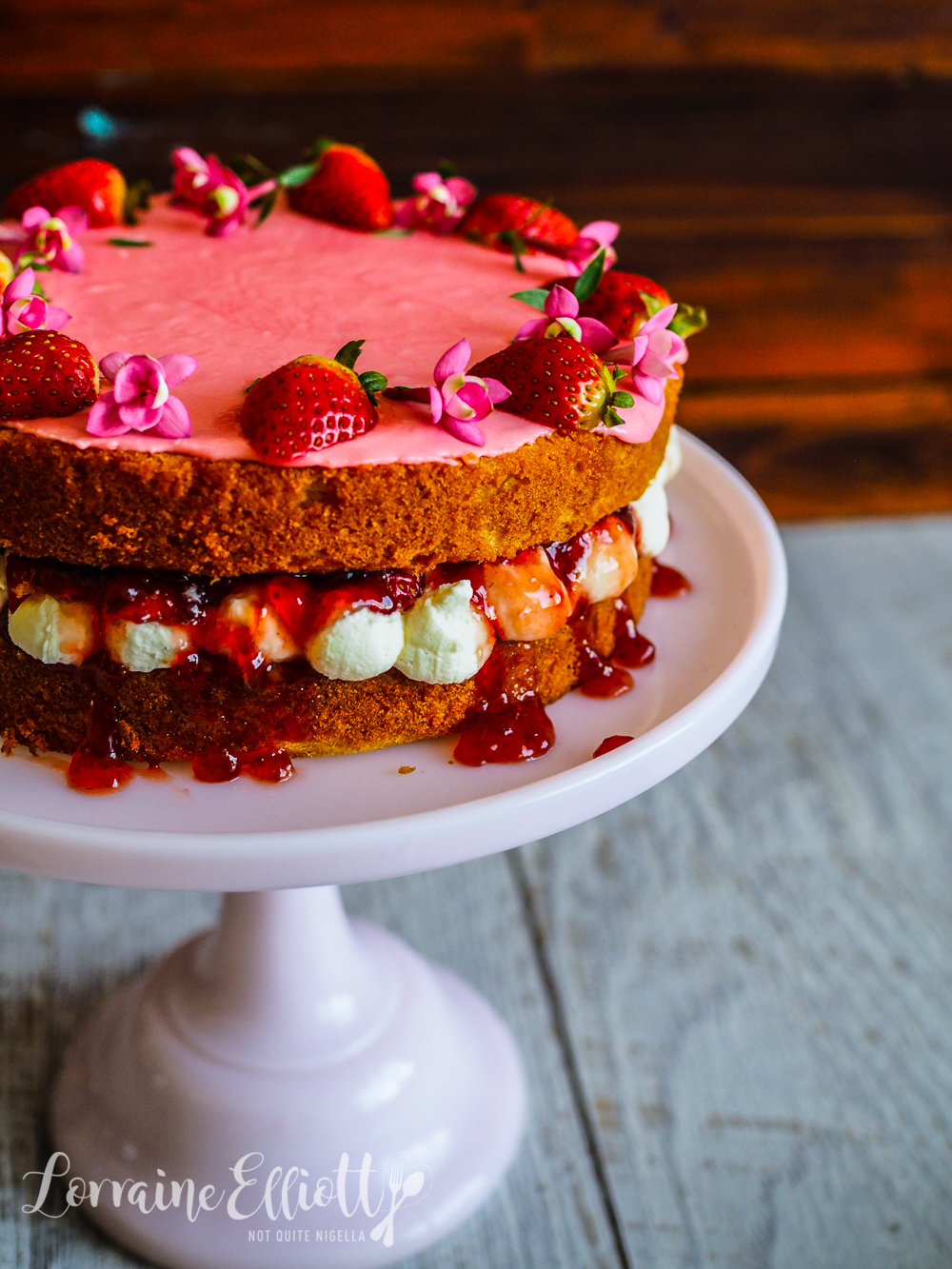 Amaya handed him a pair of pyjamas and they took him to a much bigger hospital where he would spend the next few days. He saw countless doctors who would always ask him the same question: "What is your name?" and would see him for a total of 10 minutes before giving him some pills.

"How did you get out?" I asked him because by now I'm sure most of us that were medicated would have trouble convincing anyone we were ok. "I made friends with all of the staff," he explained. And a couple of days before Mother's Day lunch he was released and on medication. I had to admit that it was the healthiest he seemed and I was glad that he got help. And apparently the only negative side effect was that he had an enormous appetite and wanted three slices of cake. 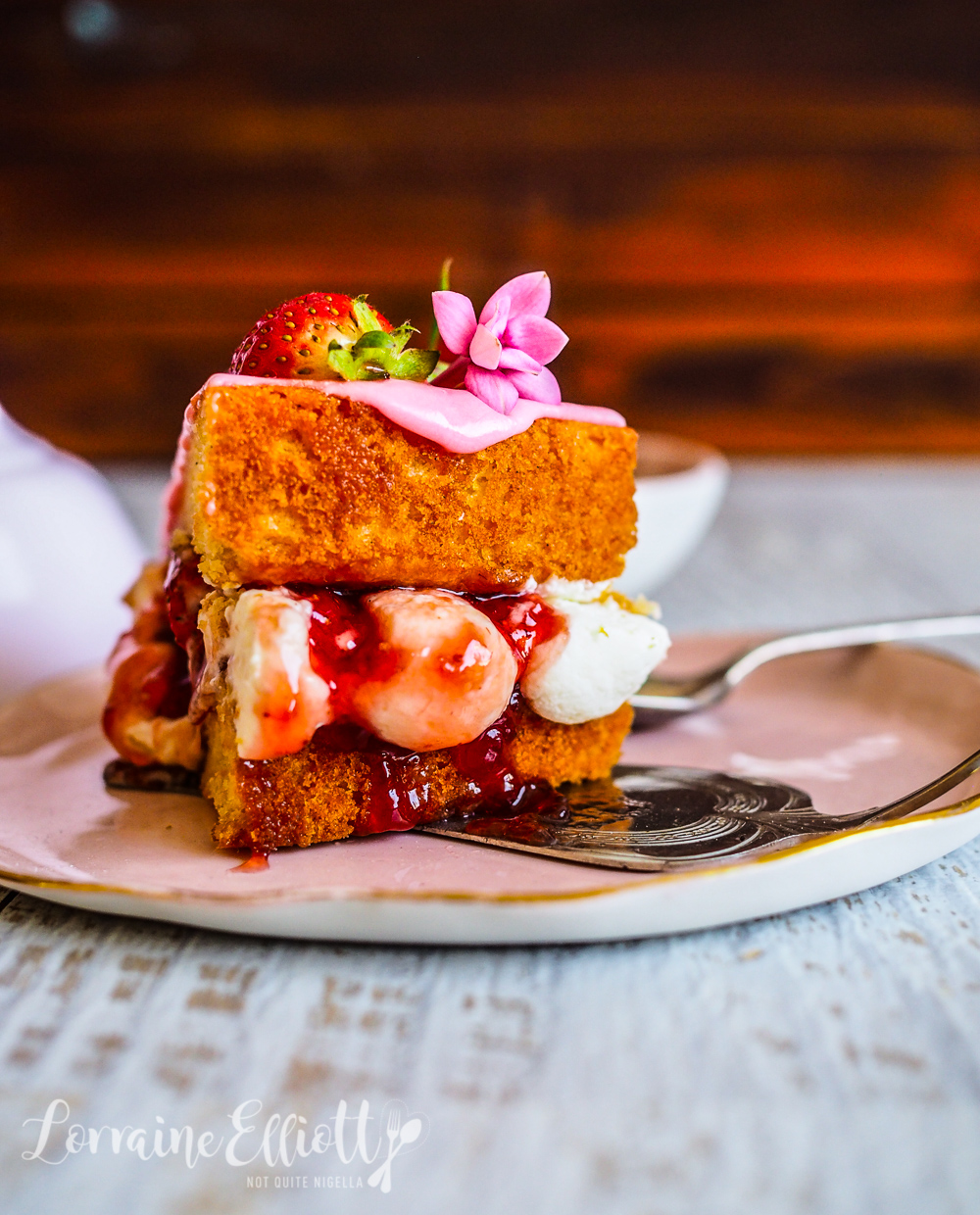 He also looked upon the situation with wry humour, "Well you know now that means I'm officially the craziest member of this family. And we all thought that would be Roger (Mr NQN's father)!". I know humour is often used to disguise pain but given recent events where we have lost some of the brightest and shiniest stars I'm just happy when people get help.

So tell me Dear Reader, do you think you would have a tough time convincing people that you were ok? And what was your dream cake as a child?

Step 1 - Preheat oven to 190C/374F and line 2x20cm/8inch tins on the base and sides. Beat butter and sugar together until pale and fluffy (around 3-4 minutes). Add vanilla and eggs, one at a time beating until mixed through. It may curdle a little and that is ok.

Step 2 - Fold in the flour and mix until just combined. Divide among the two tins and bake for 20 minutes or until the centre springs back when touched. Cool completely and you can wrap these and decorate them the next day or freeze them.

Step 3 - Place one cake layer on a serving plate and spoon over half the jam. Take all but three of the strawberries and cut into small pieces. Whip the cream with the vanilla (I don't add any sugar as the jam is so sweet) until you get a stiff cream. Place in a piping bag and pipe dollops over the jam. Then scatter over with the strawberry pieces filling in the gaps and then dollop over the remaining jam.

Step 4 - Place the other cake layer on top. Place the icing sugar into food processor and blitz to remove any lumps. Add the colouring, butter and then the water one spoonful at a time until you get a smooth, spreadable icing. Work quickly as it can set quickly but smooth it over the cake. Halve the remaining three strawberries and add these on top along with some pink or white flowers. 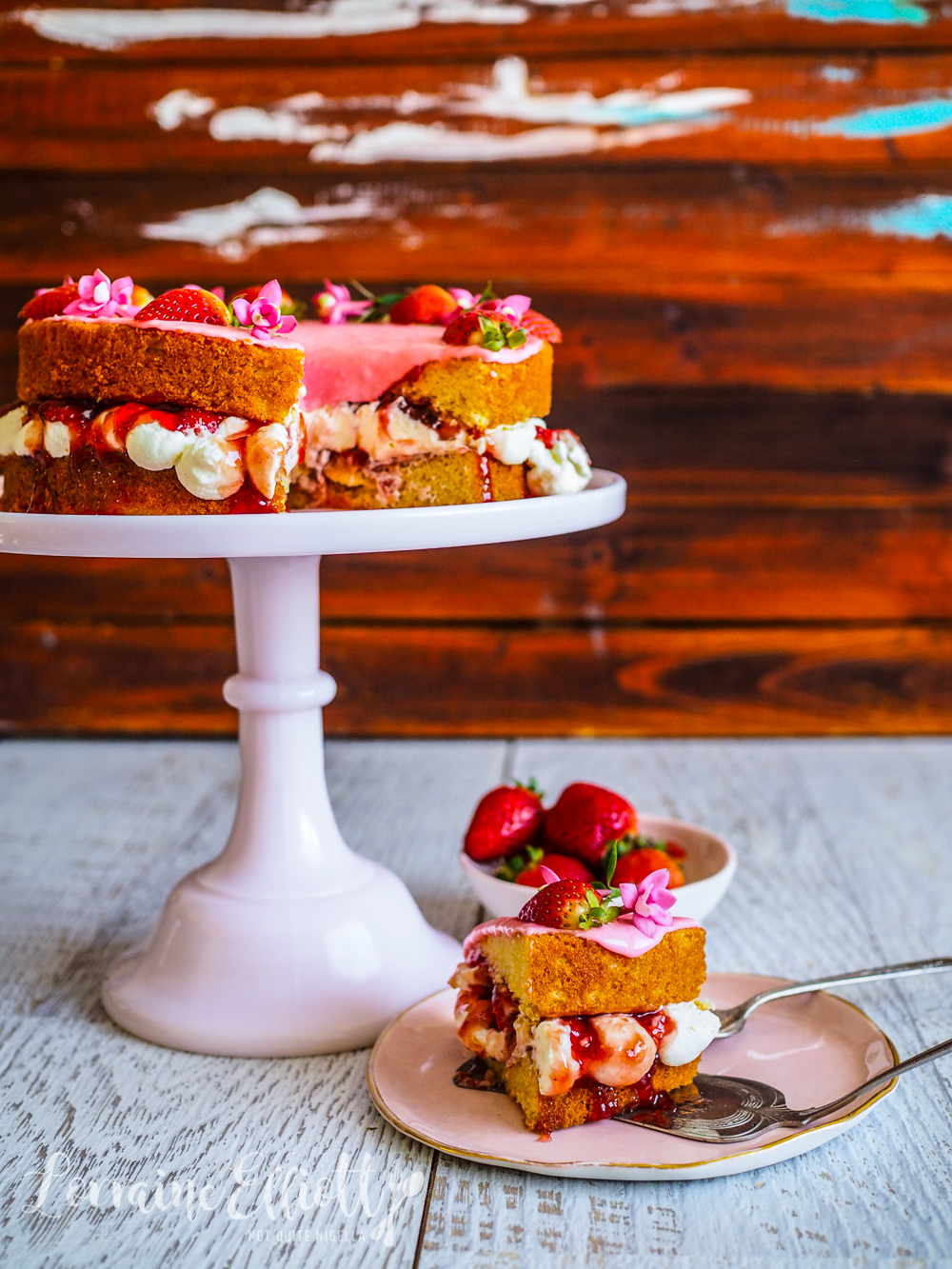