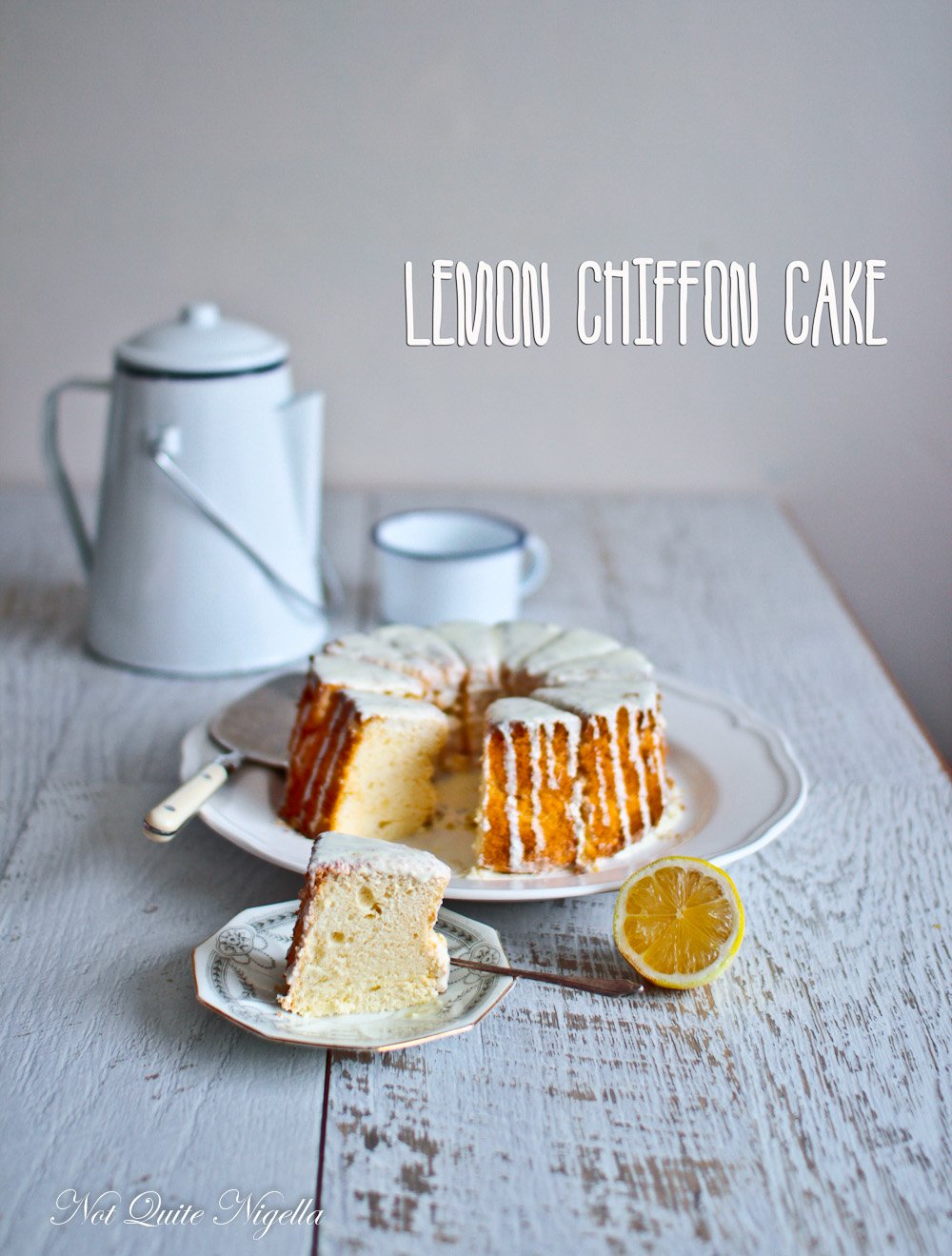 This lemon chiffon cake is simply heaven. I have no other way to describe it to you. It's beautifully tall and sliced on a plate it needs very little adornment. But there is no point to just physical beauty with cakes. It's also the airy texture without being dry and the sherbetty tang of lemon and sweetness of white chocolate that really makes this beauty. It's like a supermodel with brains. An unbeatable combination.

However there is no way around this and I have some bad news to tell you. You really need to have a chiffon cake tin to make this. I hope you don't mind. Now you know me, I'm not one to suggest people buy unnecessary equipment because my kitchen is so small that single use items are usually not considered. But given that I am in the midst of one of my most fervent obsessions for sponges cakes, as soon as I saw it was lemon chiffon day (on March 29th) and a reader asked for a recipe, you know that I bought a chiffon cake tin. 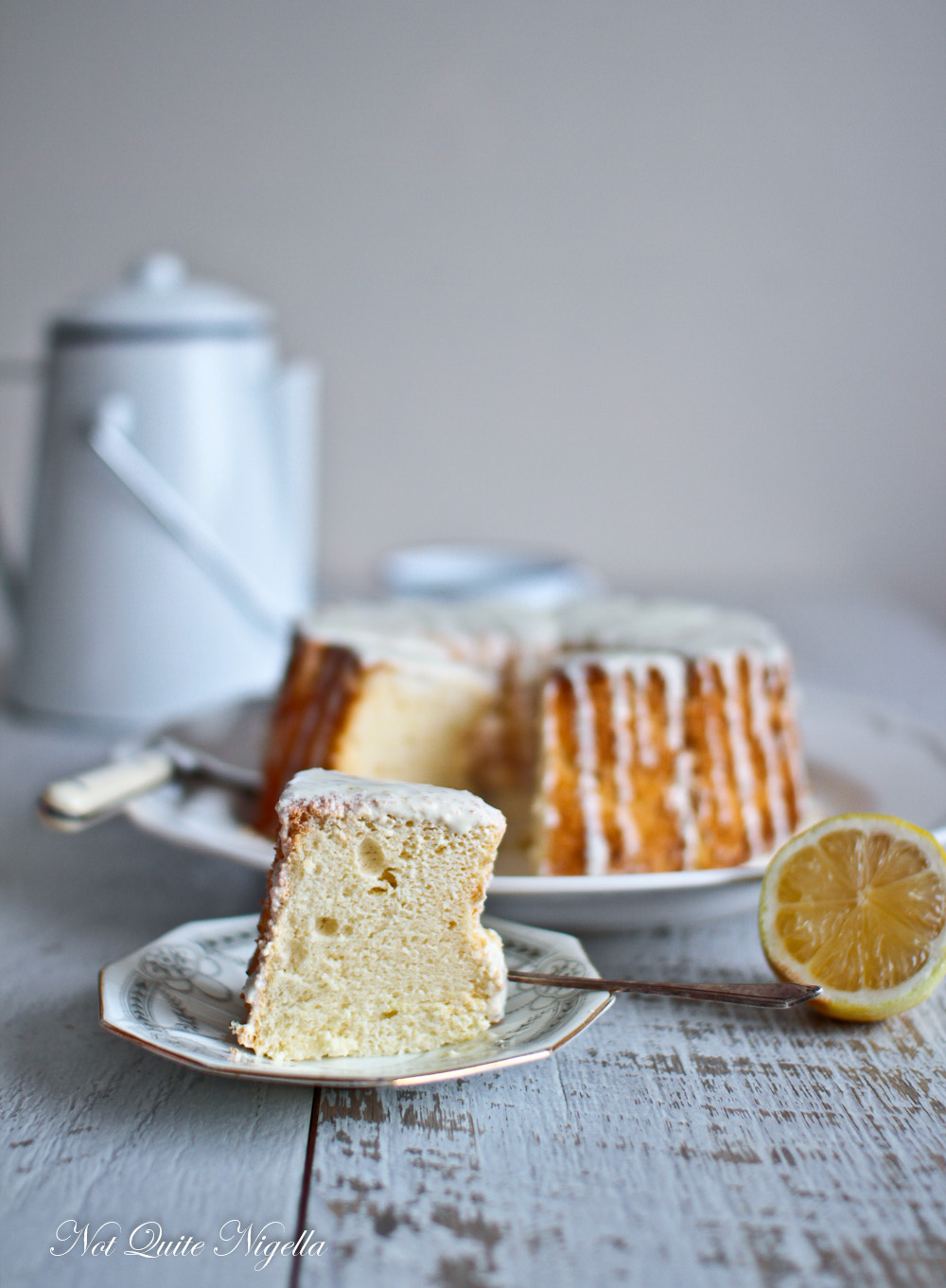 A chiffon cake is like a cousin to the angel food cake. The difference is that chiffon cakes use egg yolks while angel food cake uses only egg whites but they are both baked in the same tin. The trick to both these cakes is getting the right tin. I used Jo's orange chiffon cake recipe as a guide and it was very useful. She insisted that non stick tins are the worst thing for chiffon cakes because the cake needs the sides to grip on to rise. So I went hunting for a chiffon cake tin and the only non stick one I could find was on ebay. Here is a link to it. They shipped very quickly and it arrived in three days and was just as described.

Chiffon cakes are absolutely stunning cakes. They are the supermodels of the cake world really as they're naturally photogenic. When you cut them up and serve them they're tall and proud and need very little decoration. They're also surprisingly simple and straightforward and beautifully light and airy with every bite. I called her Lucy. 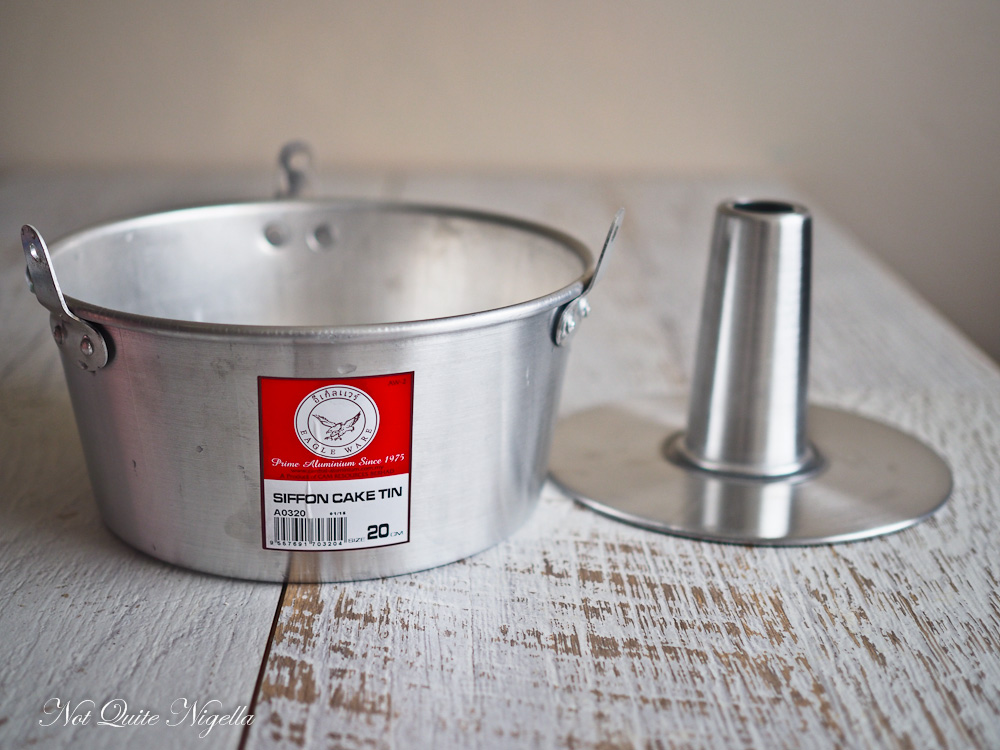 A few weeks ago we were travelling interstate and ended up in the same city as some of our closest friends by sheer coincidence. First I found out that Belinda and Ringo were going to be there with Cheryl. We arranged to meet up for afternoon tea and I made a booking for 5 people for Sunday afternoon. Then we found out that Louise and Viggo were also there too so we tried to extend the booking to 7 people. I tried calling several times but only got the answering machine so we decided that we could share the food for 5 between the 7 of us and we would order some extra food if we were hungry.

The afternoon tea included sparkling wine, sparkling water and tea or coffee as well as the three tiers of food. It arrived on an enormous stand and there five of everything. The couples shared things as they had just come from breakfast. Service was very strange - when Belinda and Ringo arrived early and decided to order some drinks and fries the waiter cautioned them with, "Any food you order will be extra you know." Then he left a slightly alarmed voicemail on my phone alerting me that two guests had arrived early and he wasn't sure if they were part of my party or not.

Louise was the only person that opted for the included sparkling wine which was a shame as her glass was the only one that had a dead fly in it. When she asked for a new one, the waitress flustered, didn't take another one from the table but left the bottle of sparkling wine on the table for the duration of the tea and went to fetch another glass. 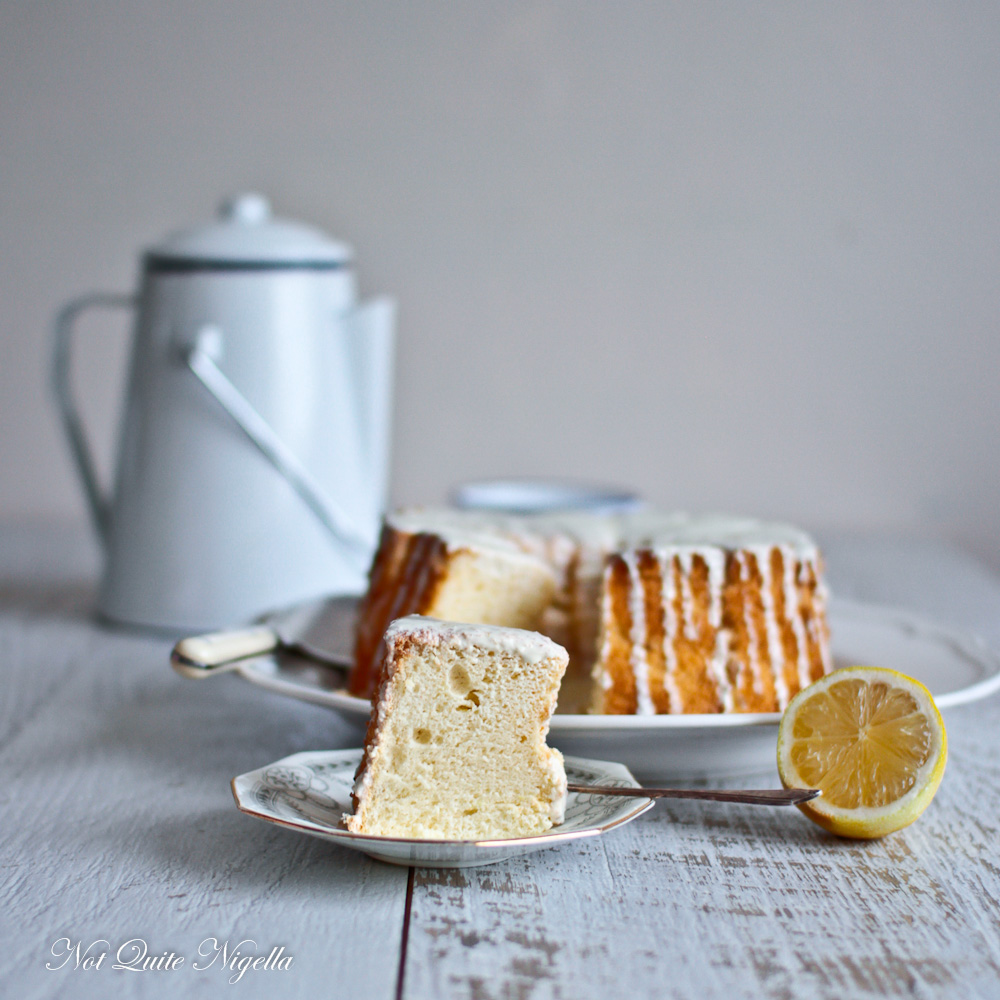 Still we were in good company and it was all very pleasant until the bill arrived. Our waiter presented it to us and said, "I added an extra person for the high tea, I hope you don't mind." We all looked at each other bewildered and gave him a "Say Whaaaat?" expression. We certainly did mind as we had only ordered high tea for five and the couples had painstakingly split the food. "But we only ate the food for five plus the burger," said Belinda. He said, "There were six of you that ate the food and you had extra drinks." The only problem was that only three of us ordered tea, only one person drank sparkling wine and we split all the food so there were no extra drinks, there were in fact less drinks consumed. We explained this to him.

He thought about it for a second. "Yes...but there was a bottle of champagne on the table," he said by way of explanation. "But your waitress left it there," we said. In the end he saw that we hadn't actually eaten more, we had eaten less than what we had paid for. We ended up laughing about how he had phrased it with the ending "I hope you don't mind," because most people in their right minds would mind and it was a overly pleasant way of delivering some unpleasant news. And if anything it gave our little group a new saying as we were leaving.

"I let down your tyres in your car. I hope you don't mind."

"I slept with your wife. I hope you don't mind."

"I filmed you naked without your consent. I hope you don't mind."

So the bad news is that you may need to buy a chiffon cake tin. I really hope you don't mind ;) But I think once you make one chiffon cake you may make another because these simple beauties are easy on the eye and glorious to eat.

So tell me Dear Reader, have you ever had a strange service situation like that? Do you tend to laugh it off? Would you have minded being charged the extra person? Have you got a chiffon cake tin?

Adapted from Jo The Tart Queen 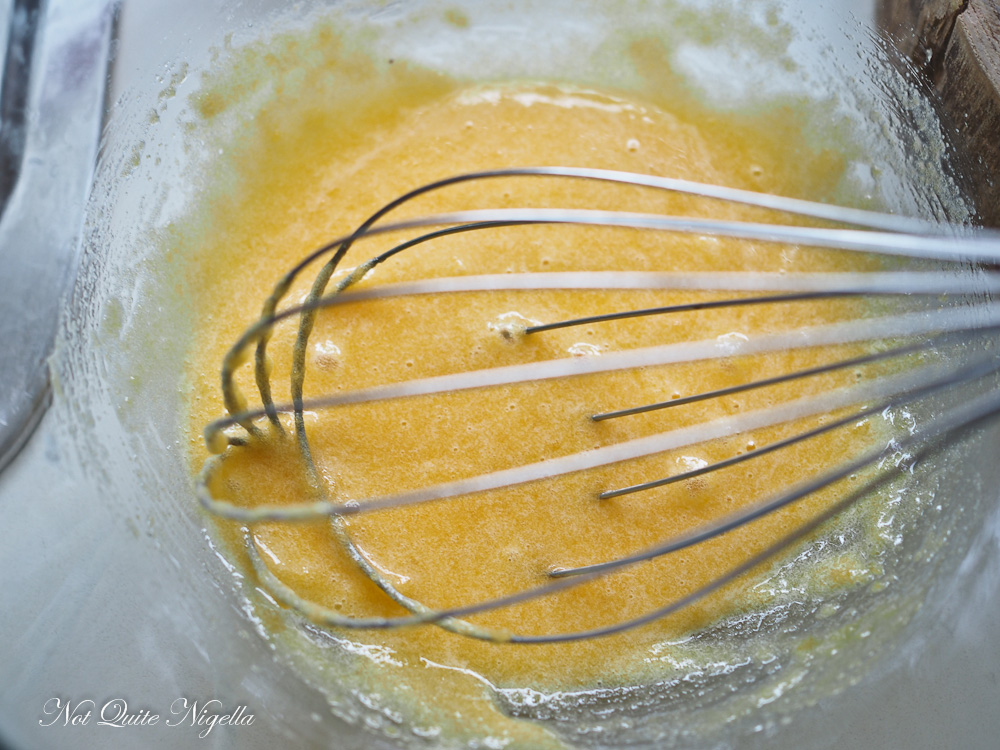 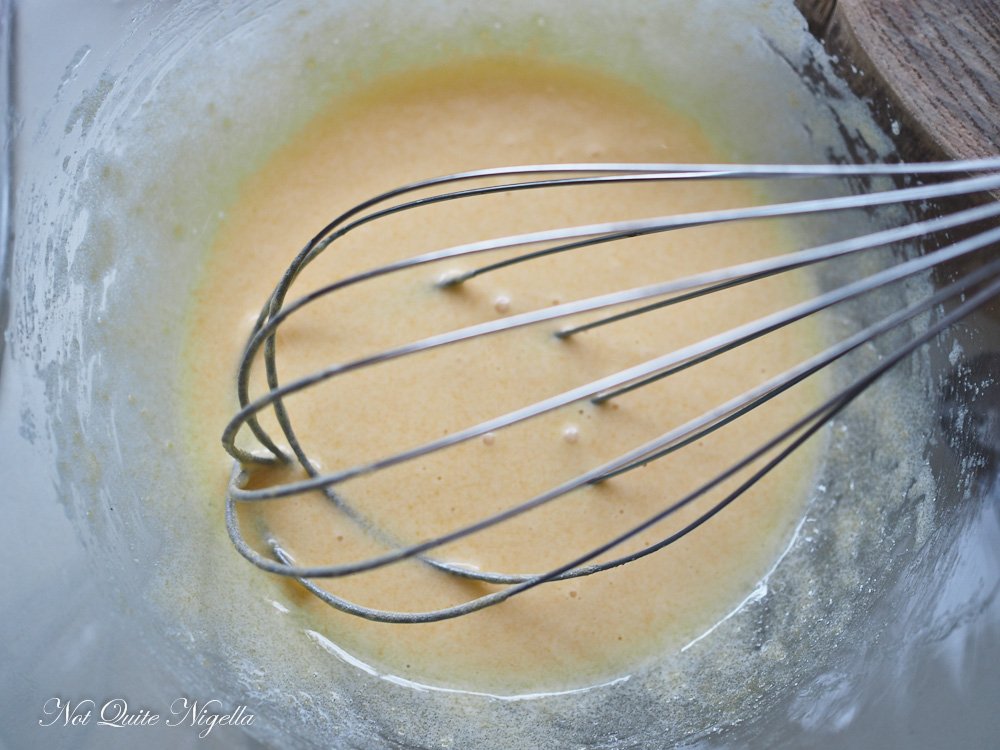 Step 2 - Separate the eggs making sure not to get any yolk in the white. Set the whites aside. In a large bowl, using a balloon whisk, whisk the egg yolks and sugar until pale and fluffy. Add in the oil and whisk and then the lemon juice and zest. Sift in the cake flour, baking powder and salt in from a height. 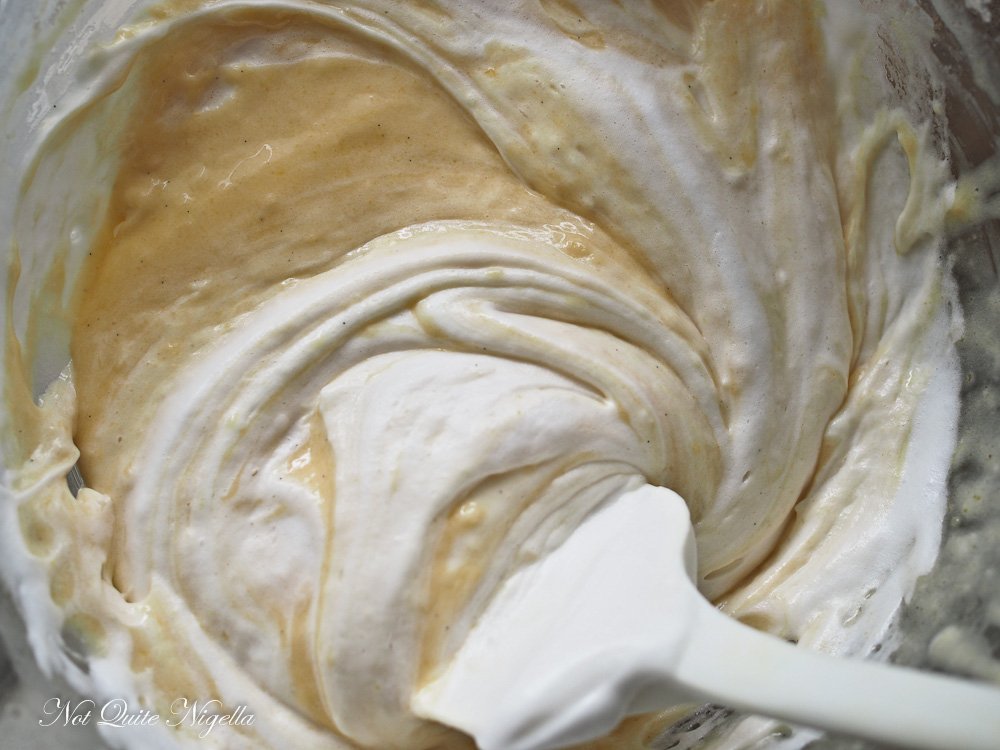 Step 3 - Whisk the egg whites and the cream of tartar in a very clean mixer bowl (any fat or butter in the bowl will prevent it whipping up to the desired height). When the whites reach soft peaks pour in the caster sugar in a a steady stream while whipping and whip until you get stiff, glossy peaks. The test is if you can turn the bowl of meringue upside down and it doesn't move. 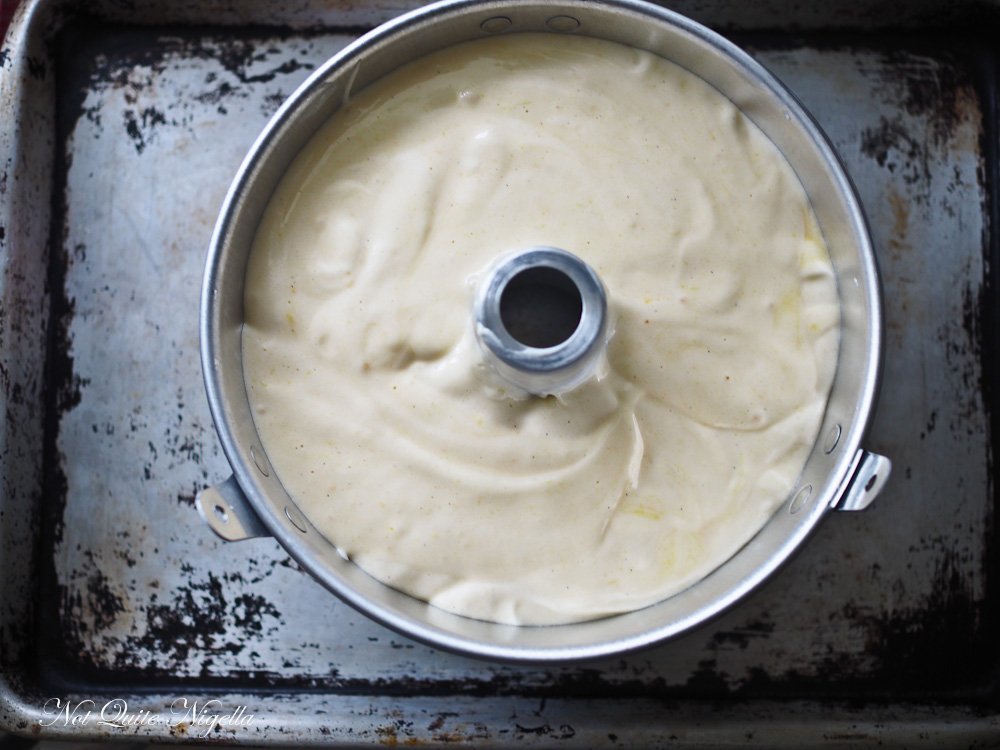 Step 4 - Take a quarter of the meringue mixture and using a spatula fold it into the egg yolk mixture. Add the remaining egg white in three batches making sure that no streaks remain. Pour into the chiffon cake tin and bake for 45 minutes or until a skewer inserted comes out clean. Allow to cool completely in the tin. Do not try to remove from tin until completely cold.

Step 5 - Invert the cake resting it on the side "legs" to cool. Using a palatte knife, gently ease the cake away from the tin and slide it between the cone and the cake. Trim the base of the cake if needed.

Step 6 - Melt the white chocolate and the cream together until liquid. Add the lemon zest and the white colour if using and stir until smooth. Allow to cool and thicken a little in the fridge before pouring on top and down the sides.