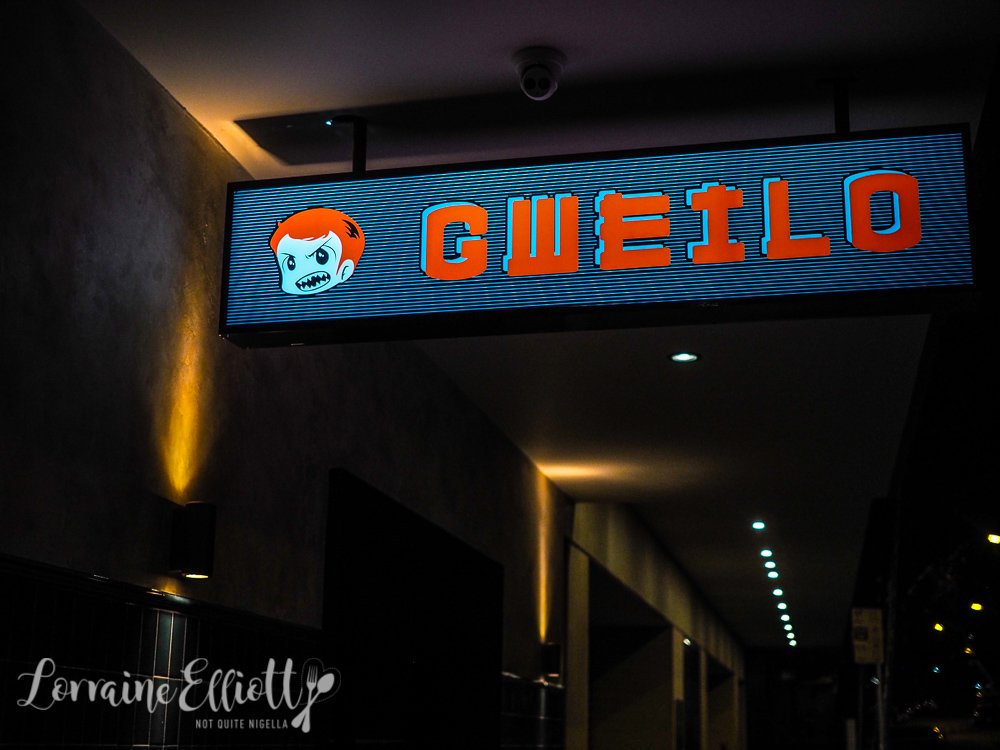 The Evening Star pub has a new restaurant. Gweilo is a pan Asian restaurant with a menu that covers Chinese and Hong Kong dishes with a bit from other countries as well. The food is not your usual pub food with delicious rendang given a twist with Toohey's New beer, typhoon shelter prawn and chorizo fried rice and konbu fried chicken baos.

The Evening Star first opened in 1873 and has had some famous and not so famous patrons - Nirvana's Kurt Cobain and Dave Grohl once played pool there. The term Gweilo is a pejorative term. Originally its meaning is "ghost man" which is what it literally translates to although mostly nowadays it just means Caucasian people (although not to my grandmother who clucked at the family for using the term). There's a cringe when I read their website and they have "Come check us out, we hope you love us long time X". Oh dear. 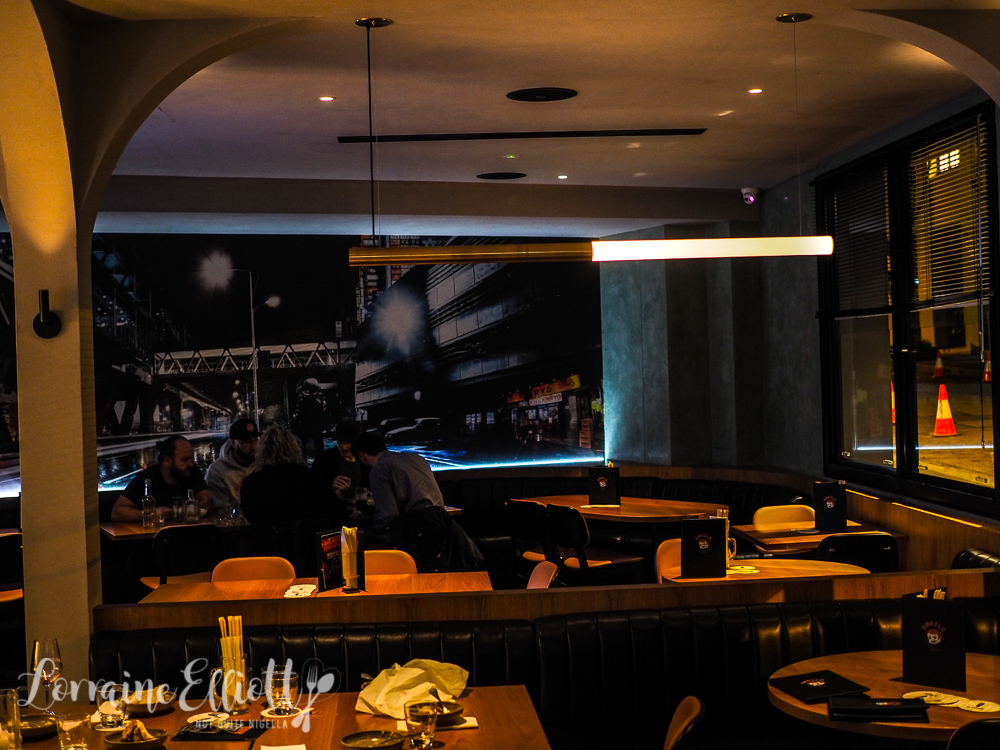 Chef Sebastian Gee has worked across several restaurants like Kid Kyoto, China Diner and Sailor's Thai. Is he the Gweilo of the name? He says, "I believe they wanted me because they had already picked the name, and a when a big, white guy with curly brown hair showed up for an interview, I think it was kismet - well that’s what I tell them!"

There is a faint waft of cigarette smoke in the simple dining room this Saturday night. Service is very friendly and accommodating and they take bookings. Staff let us know that on Saturday nights there's a $5 beer on tap and $5 bao offer. We start with a round of drinks for everyone in celebration of Mr NQN's birthday and also because we managed to escape from an escape room with 30 seconds to spare! 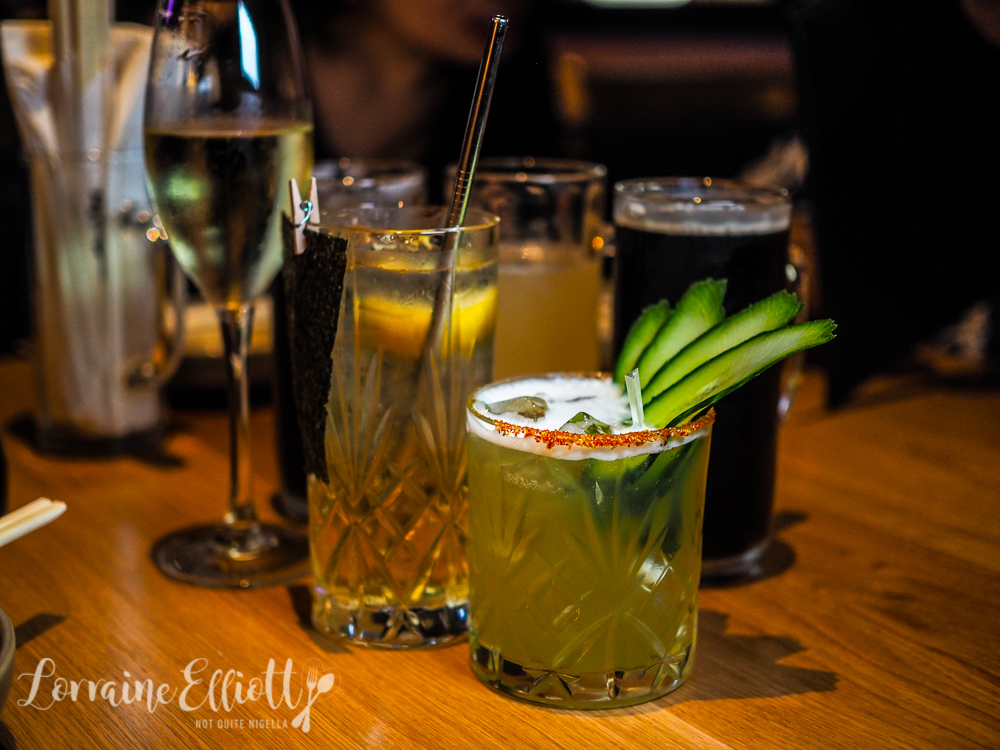 Nina, Garth, Mr NQN and Viggo order beer, cider and wine while Louise and I try some cocktails. The Hotto Pineapple is lightly spicy with dry chili infused plantation pineapple, Green Chartreuse, Ardbeg 10, Pineapple, Lime, Cucumber and Palm Sugar with a Togarashi Rim 22. There is a light flavour of pineapple and chilli but the flavour is dominated by a medicinal finish. I like the Nori Spect with nori infused Auchentoshan American oak, kaffir lime and lemongrass syrup, lemon, yuzu bitters and sparkling water. 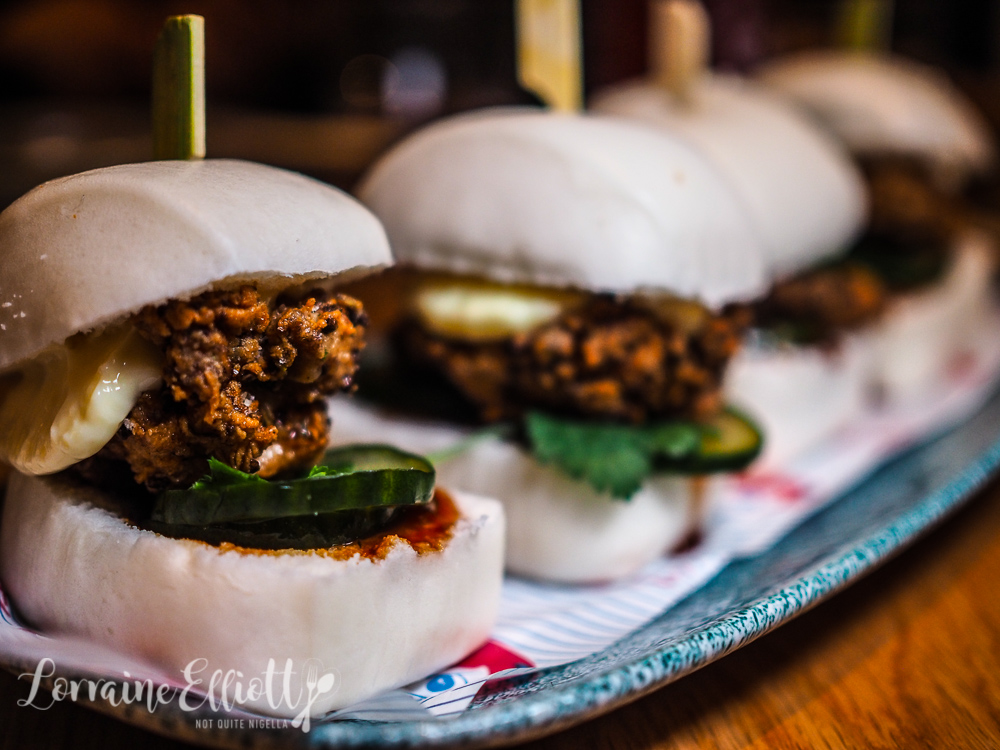 The baos are the first item to arrive. We dig into the KFC bao with konbu fried chicken fillets, bulldog sauce, mayonnaise and pickled cucumber. The baos are fat and thick and the chicken juicy and moist with a generous amount of sauces and pickles.

The eggplant parmigiana baos are also good with a parmesan katsu eggplant slice. These have an Italian flavour profile with Napoli sauce, mayonnaise and basil. Louise loves these and so does Nina but out of the two the KFC pips it slightly because of the more Asian flavours. 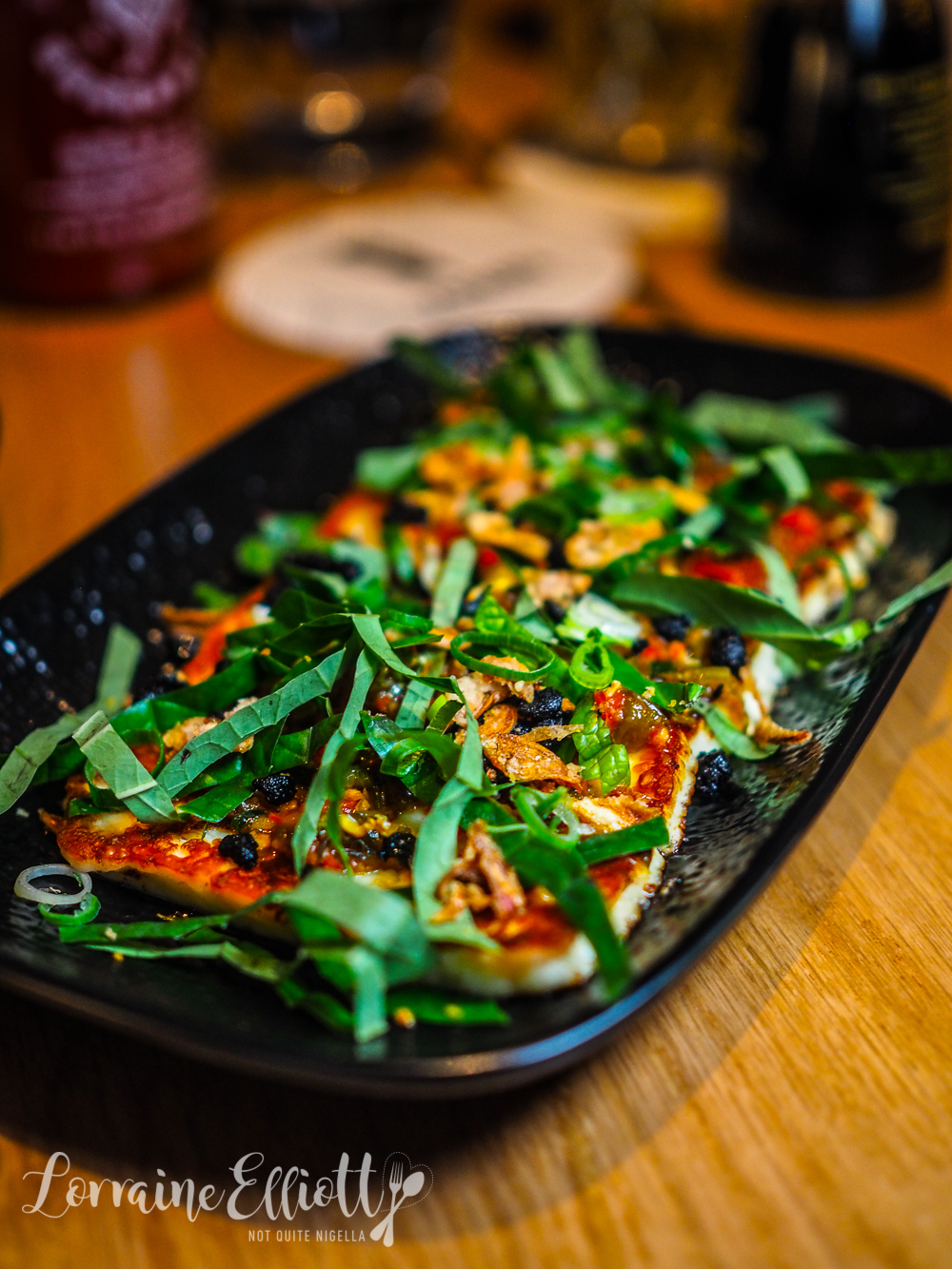 We are all big fans of the thick, fat slices of pan fried halloumi. They're topped with a crunchy, nubbly mix of topping with hot and sour peppers, dried black olives and sliced betel leaves. There is a lot of flavour and savouriness to these and I wish I had more but that would have been greedy because we had ordered a lot. 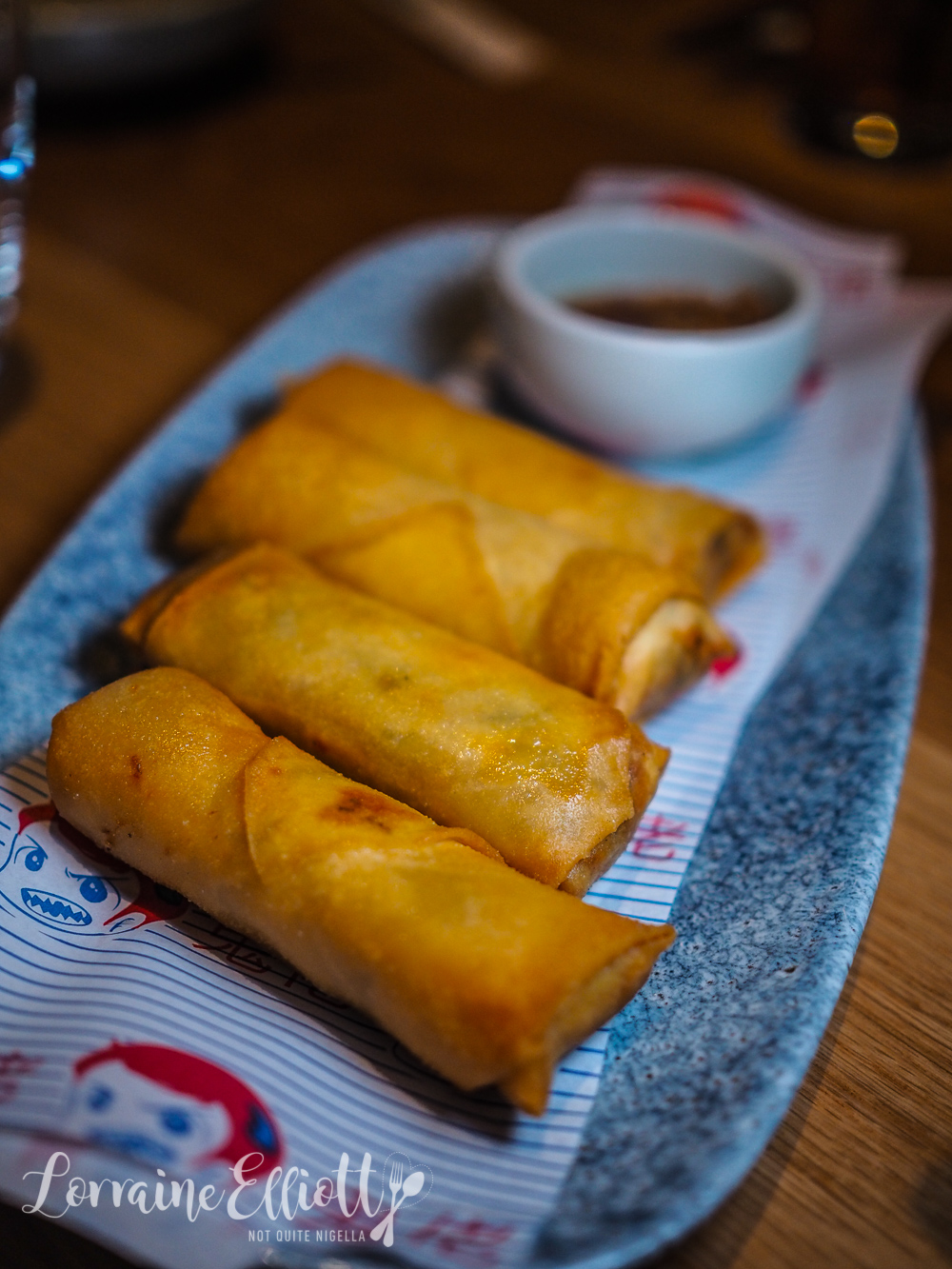 We were strongly recommended these by our waiter. They're nice enough but I couldn't really discern the truffle in this and we weren't quite sure with the roast shallot nuoc cham as the roasted shallots soaked up a lot of the nuoc cham sauce. 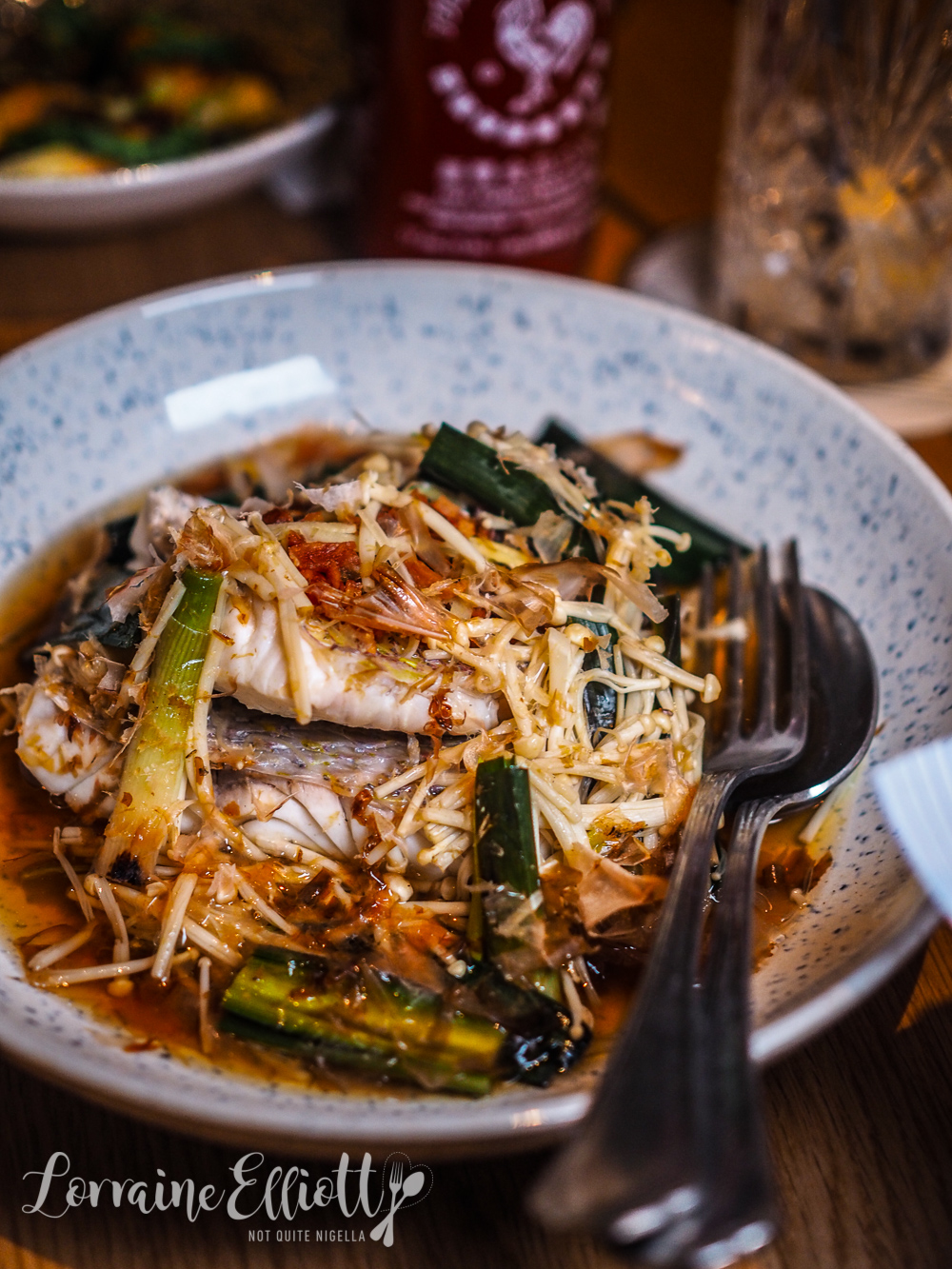 This was another waiter recommendation and we really loved this dish. It's a fillet of snapper with a lovely umami broth flavoured with grilled shallots, bacon oil and enoki mushrooms on top. The snapper is cooked well so that it is still tender and juicy. 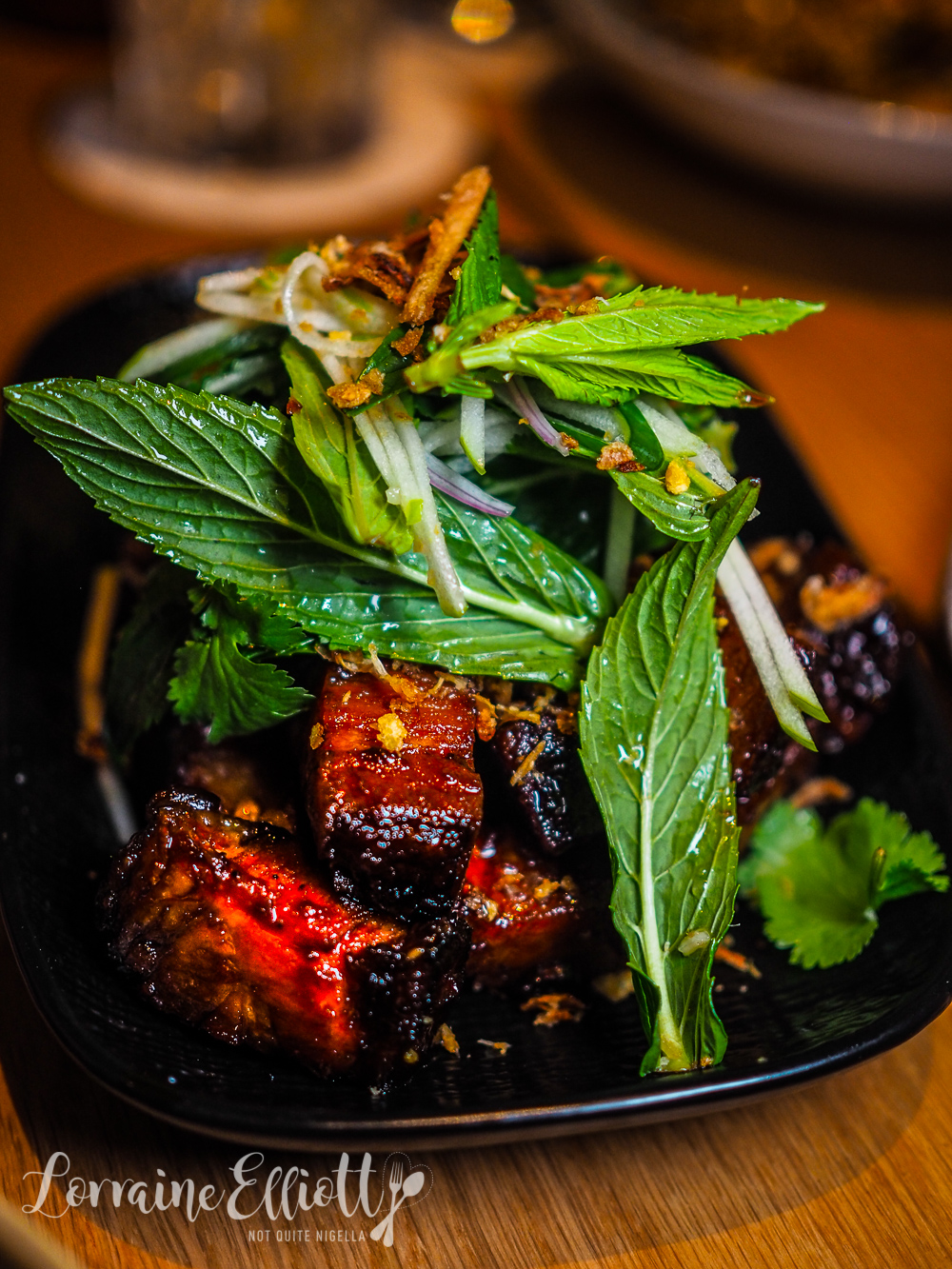 The pork belly comes as sticky squares of soft, melting meat cooked with a chilli caramel but its richness is balanced with a refreshing apple and mint topping. I love this with the plain steamed rice as it's lovely and comforting. 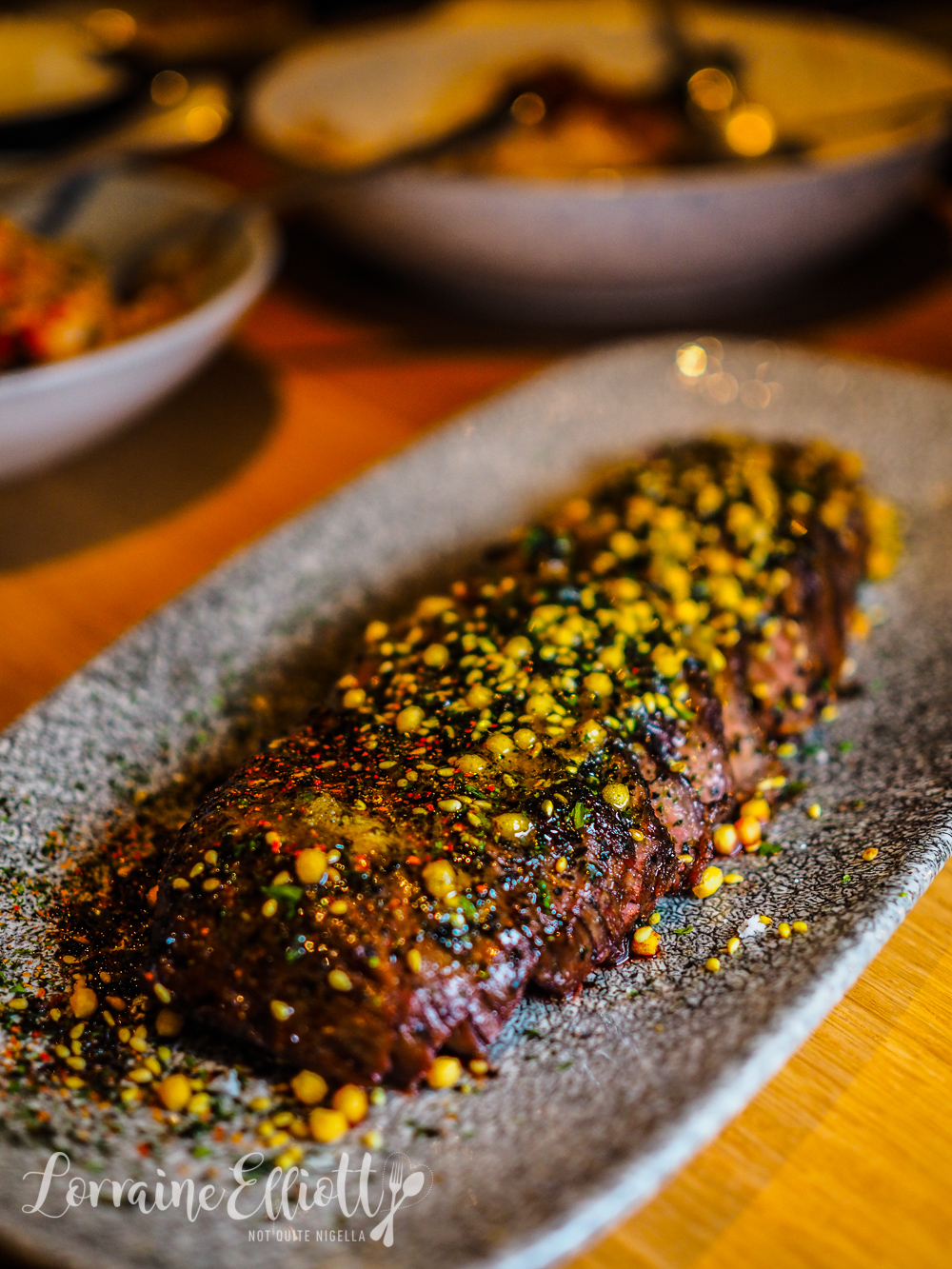 The Rangers Valley rump cap is served already sliced and topped with cafe de Nippon butter which is made with Japanese mustard powder, dried seaweed, lemon zest, fresh chives, ginger and shichimi togarashi with Arare rice pellets on top for texture. The beef is very tender but it needs a bit of seasoning but Garth is a big fan of this. 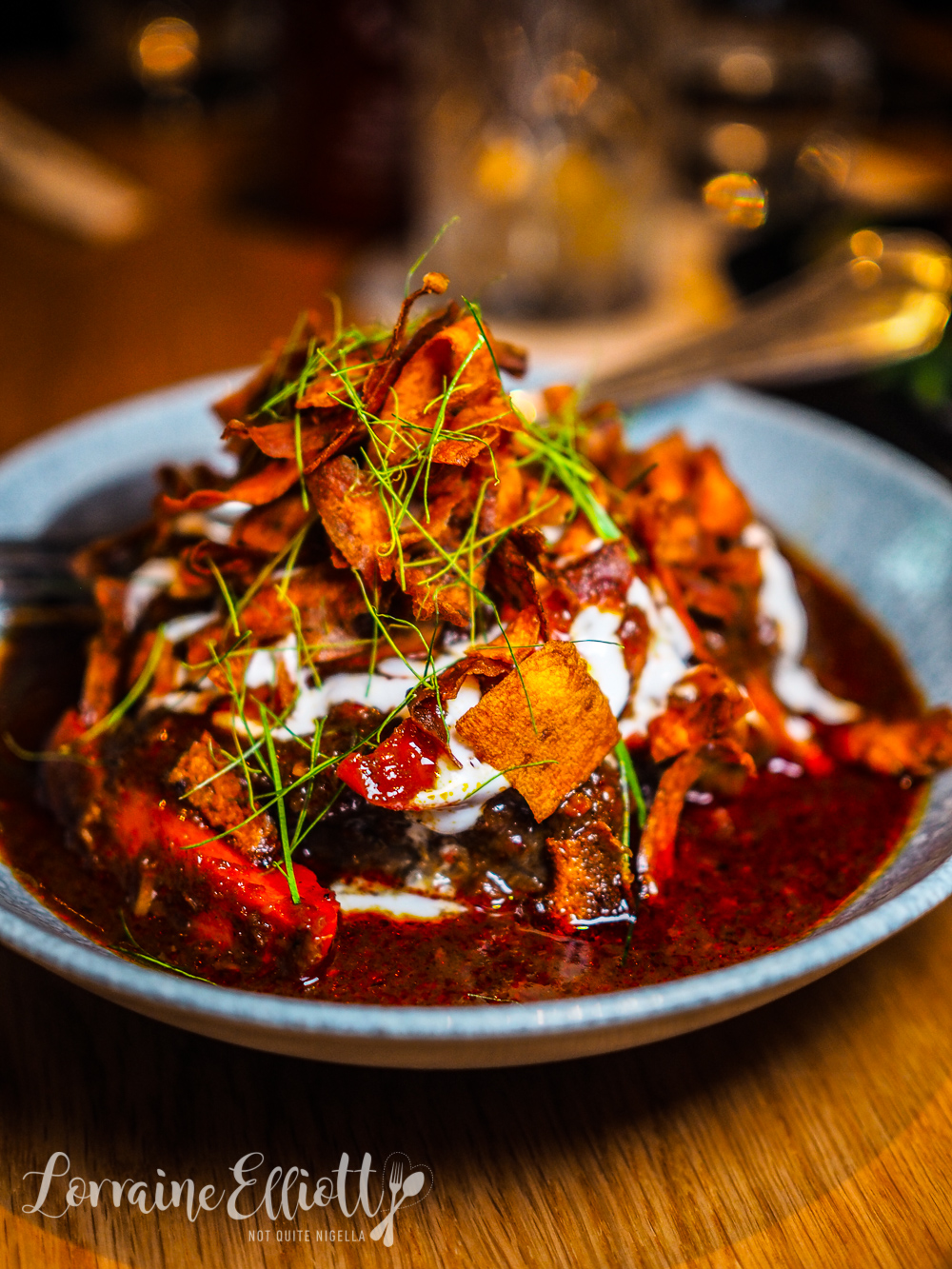 My favourite dish of the night is the rich, sweet rendang with tender carrots and made with Toohey's New beer. The beer doesn't impact the flavour of the rendang markedly but it's such a rich, moreish sauce with meltingly tender beef that it doesn't matter. 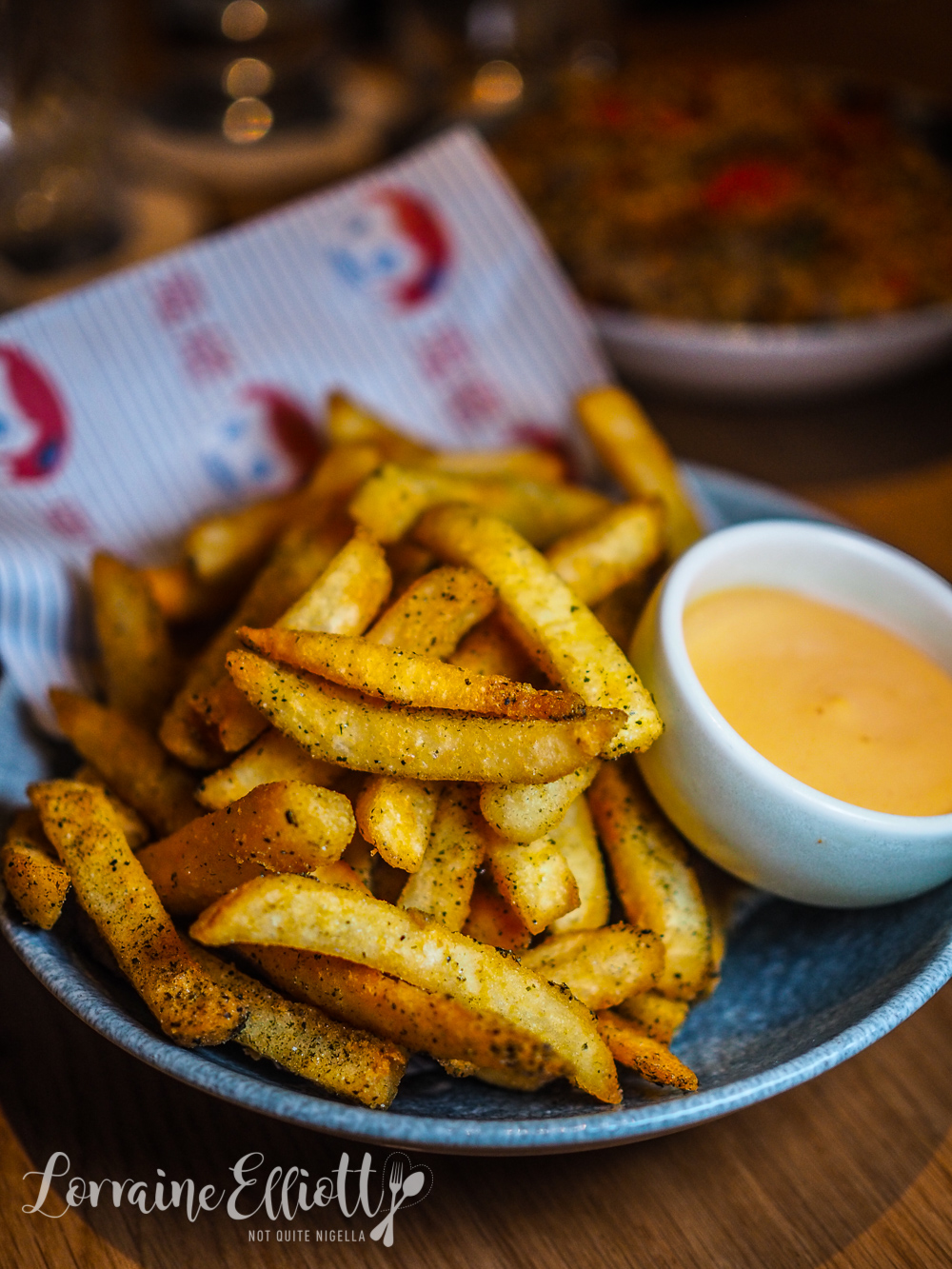 We ordered the fries because we had steak and the fries are pretty damn fab and addictive. I add some sriracha and dipped them both in the sriracha mayo and the sriracha sauce. The umami salt is made with dried nori, sea salt and rice vinegar powder and this combo makes them good on their own too. 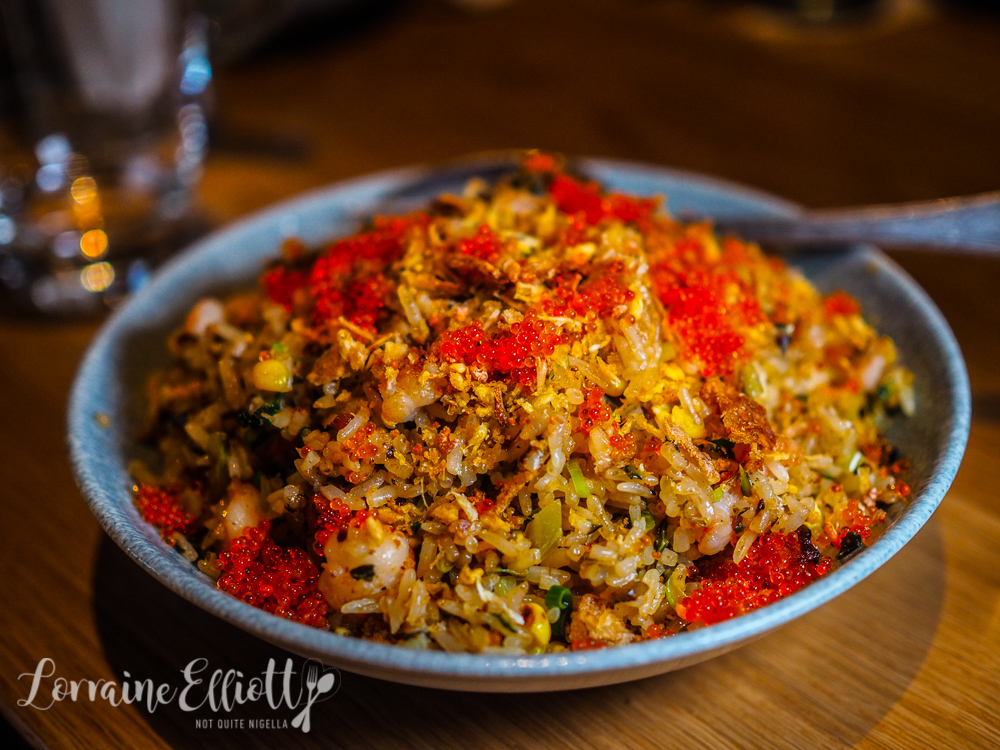 Typhoon shelter is a Hong Kong style dish that uses a lot of dried garlic on top and is usually seen with crab and prawn dishes. This is a great fried rice with lots of flavour with prawns and slices of chorizo and sprinkled with flying fish roe on top.

There are two desserts on the menu but we didn't order them because we had Mr NQN's birthday cake to eat (which was a giant monstrosity and probably too large given how much we had eaten!).

So tell me Dear Reader, which dish do you like the look of the best? Do you know the term gweilo and how do you feel about it? How about "love you long time"?