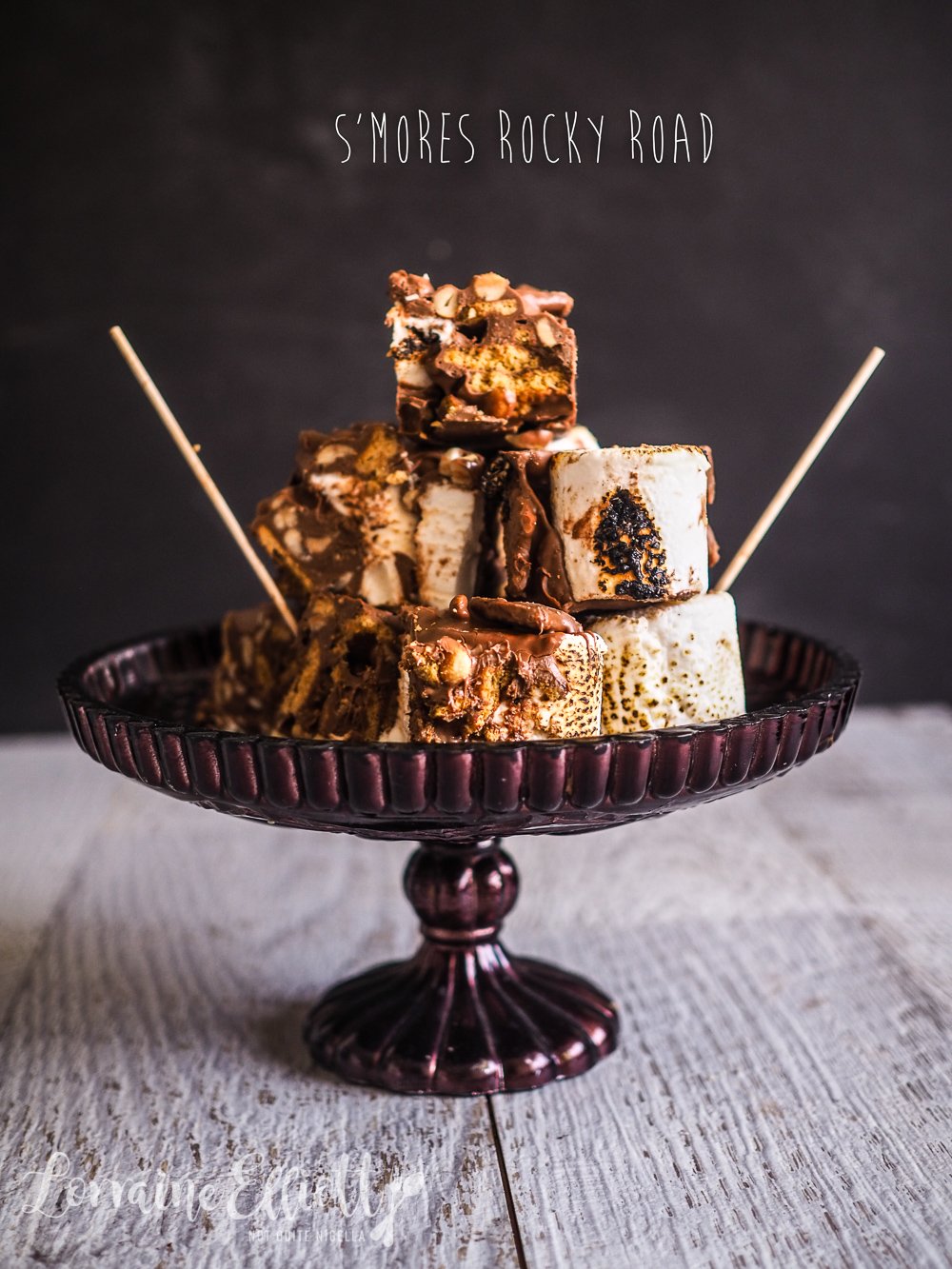 Dear Reader, this recipe comes with a warning. The heavenly combination of toasted marshmallows, cinnamon Graham crackers, milk chocolate and roasted, salted peanuts is one that you may find unable to resist! I'm sure I put on a kilo after eating this (but as they said, I enjoyed myself _immensely)._

If you offer me a packet (aka not fresh) marshmallow, I probably wouldn't bother eating it. But if you toasted it, I will down at least half a dozen of them. There's something about toasting a marshmallow that exponentially increases it's appeal. It's the soft gooey inside and the crunchy top layer. And usually you have toasted marshmallows with S'mores. That got me to thinking of an idea for Christmas gifting (too soon?): S'mores Rocky Road.

I usually make gifts of Rocky Road from Christmas. And this one was ridiculously simple: combine toasted marshmallows with cinnamon Graham crackers (because regular is nice but cinnamon is another ingredient that exponentially increases appeal), milk chocolate and salted peanuts. That's all it needs and you know what? I made out with it unashamedly. 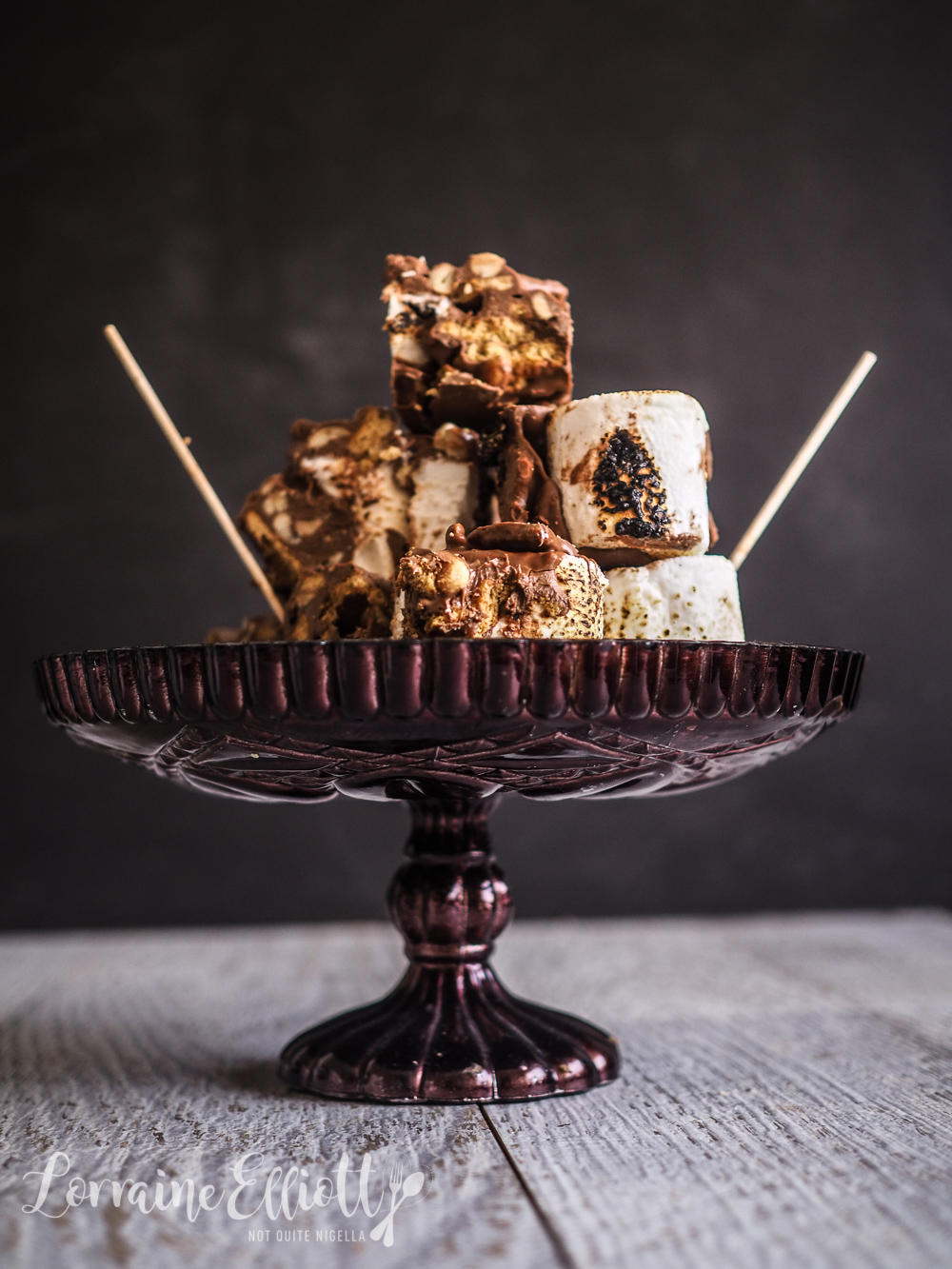 I'm usually quite measured with portions. I try a bit here and there but I don't finish bowls or plates of anything (unless they're chips or popcorn, that's another topic altogether) but I was embarrassing with this. It was full on. It was ugly. I messed up my lipstick and had chocolate on my face and fingers. And I didn't care.

Another person that is usually quite restrained with eating and much more disciplined than I is Nina. But recently a friend of hers came to see her from London and she has been on a whirlwind of eating. One night she went to Indu, the next Cafe Sydney, then Hotel Centennial and then Doyle's. Nina usually never goes out during the week because she starts work so early and every day she would wake up at the crack of dawn to train her clients, hungover and feeling bloated from the night before. She moaned, "I am really going to die. My pants are super tight at the moment so I have to cut calories..." 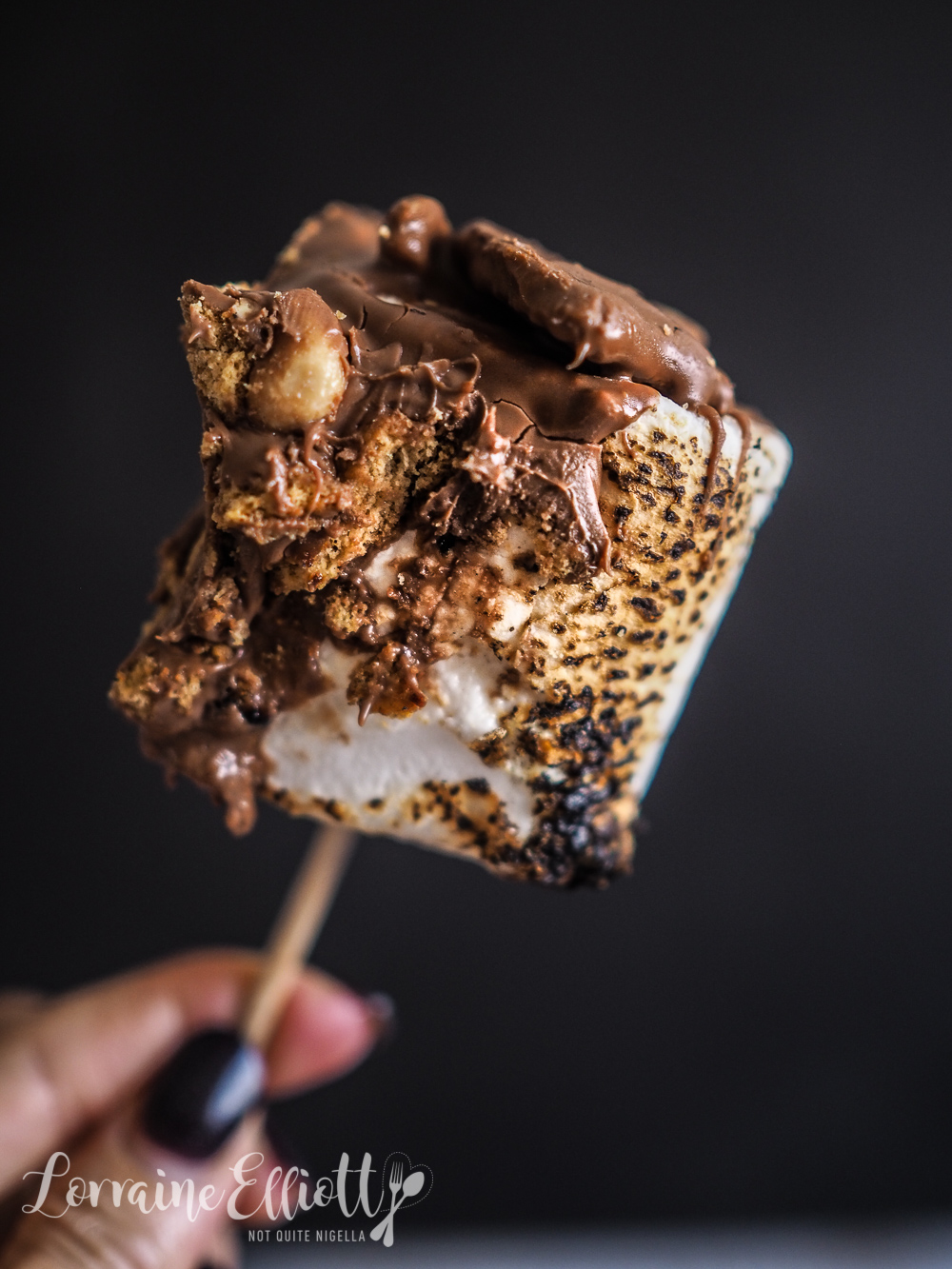 I sort of joked with her. "So don't tell me you're now a size...SMALL?" because Nina is so thin. But she said, "I put on a pair of shorts to go for a run and they actually looked like underpants they were so tight." I had to laugh because even skinny people can have challenges when they eat like normal people and I pictured Nina running in her underwear.

So what I'm trying to say is that you must give this a go, for a gift or for yourself. And yes it is moreish but it is totally worth it. Like going out to see friends you haven't seen in years, or eating giant blocks of S'mores rocky road. Sure your shorts might be a bit tighter but you'll be happier. Promise, pinky swear ;)

So tell me Dear Reader, are you good at portion control? And is it too soon to be thinking of Christmas? Do you like toasted marshmallows? 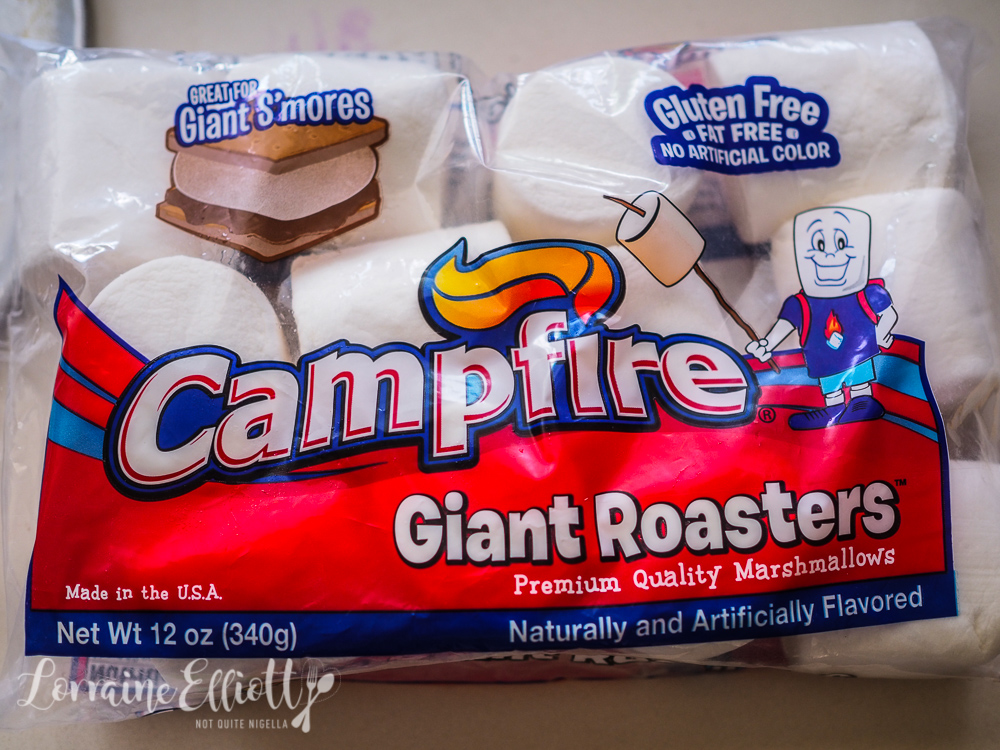 Step 1 - Line a 20x20cm or 8x8inch square tin with parchment. Place the marshmallows on a metal baking tray and blow torch them on all sides (be very careful, I worry about you my dears - turn off the blowtorch once you've done one side and then turn them over and then blowtorch the remaining half). Line them standing up in the baking tin. 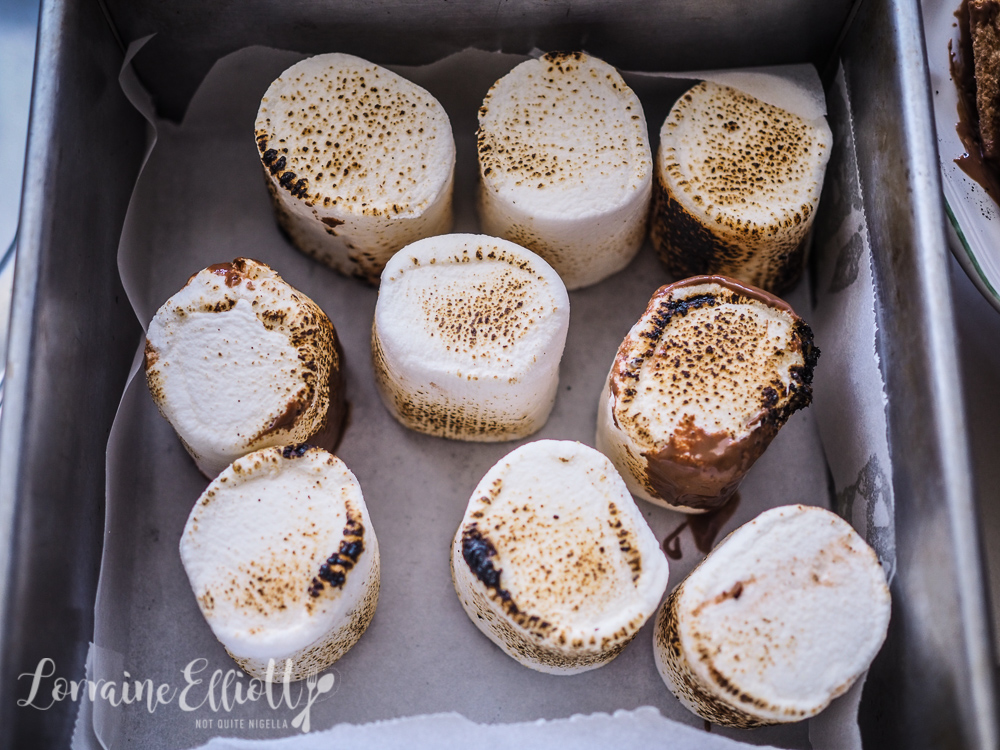 Step 2 - Melt the chocolate in a double boiler or microwave. Crumble the Graham crackers into different sized pieces and add the peanuts. Mix well coating these. Then fill in the gaps between the marshmallows making sure there are no large gaps. Take the tray and gently tap against the kitchen bench so that the chocolate settles and you don't get huge air bubbles. Allow to set completely and then cut into squares. 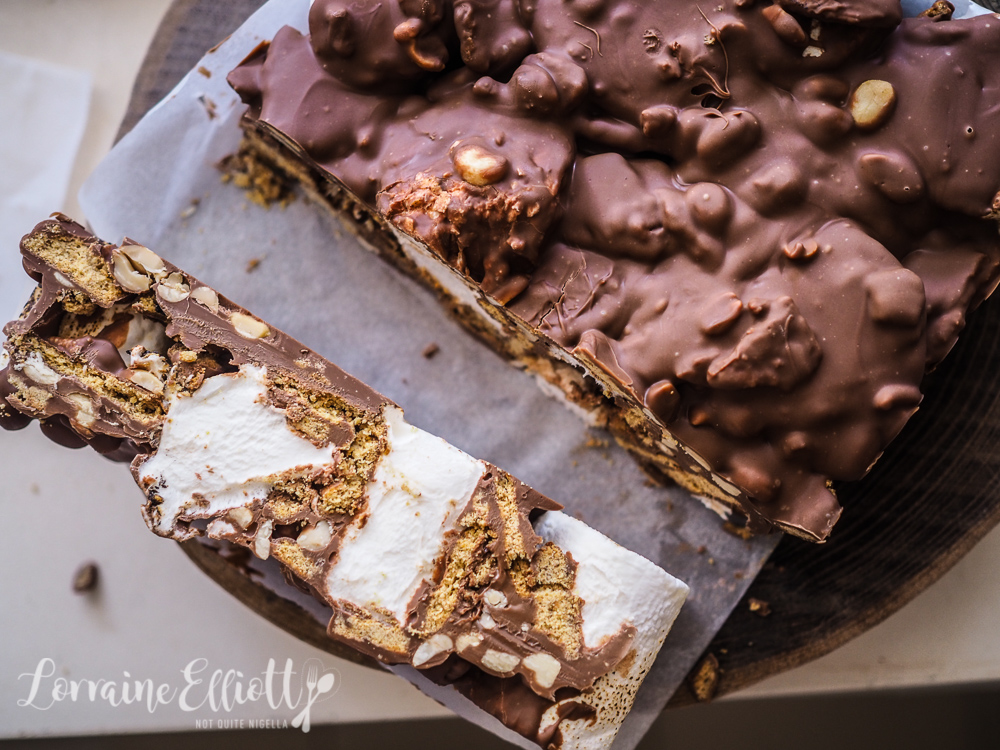 Note: if you can, keep these at room temperature because the fridge sets the marshmallows firm and you lose that lovely toasted texture. 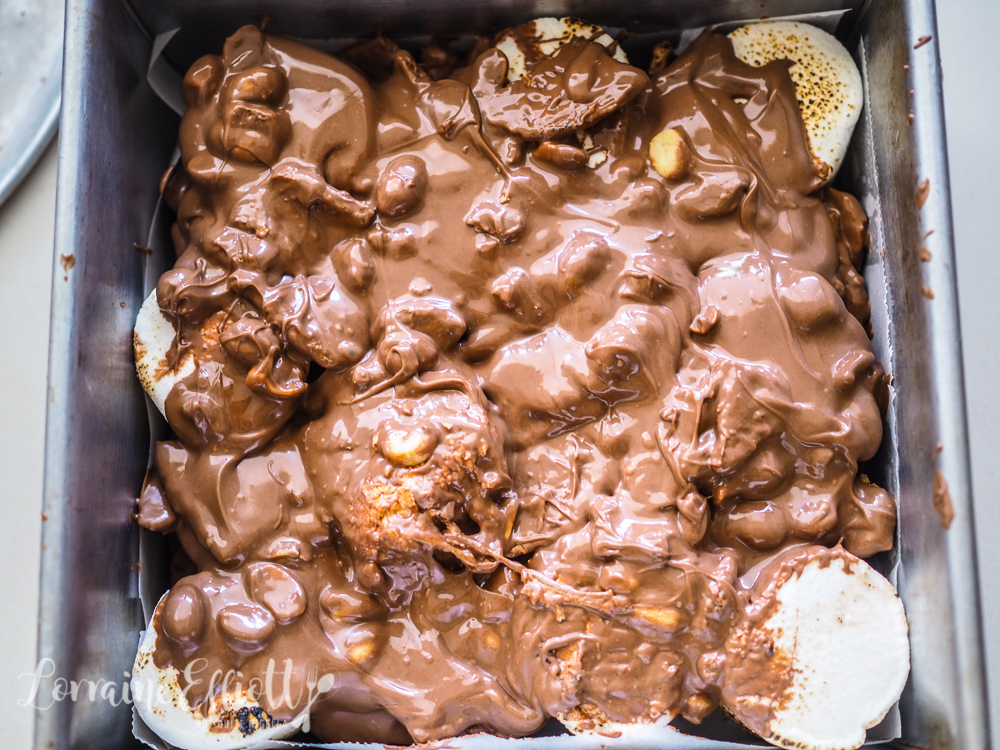 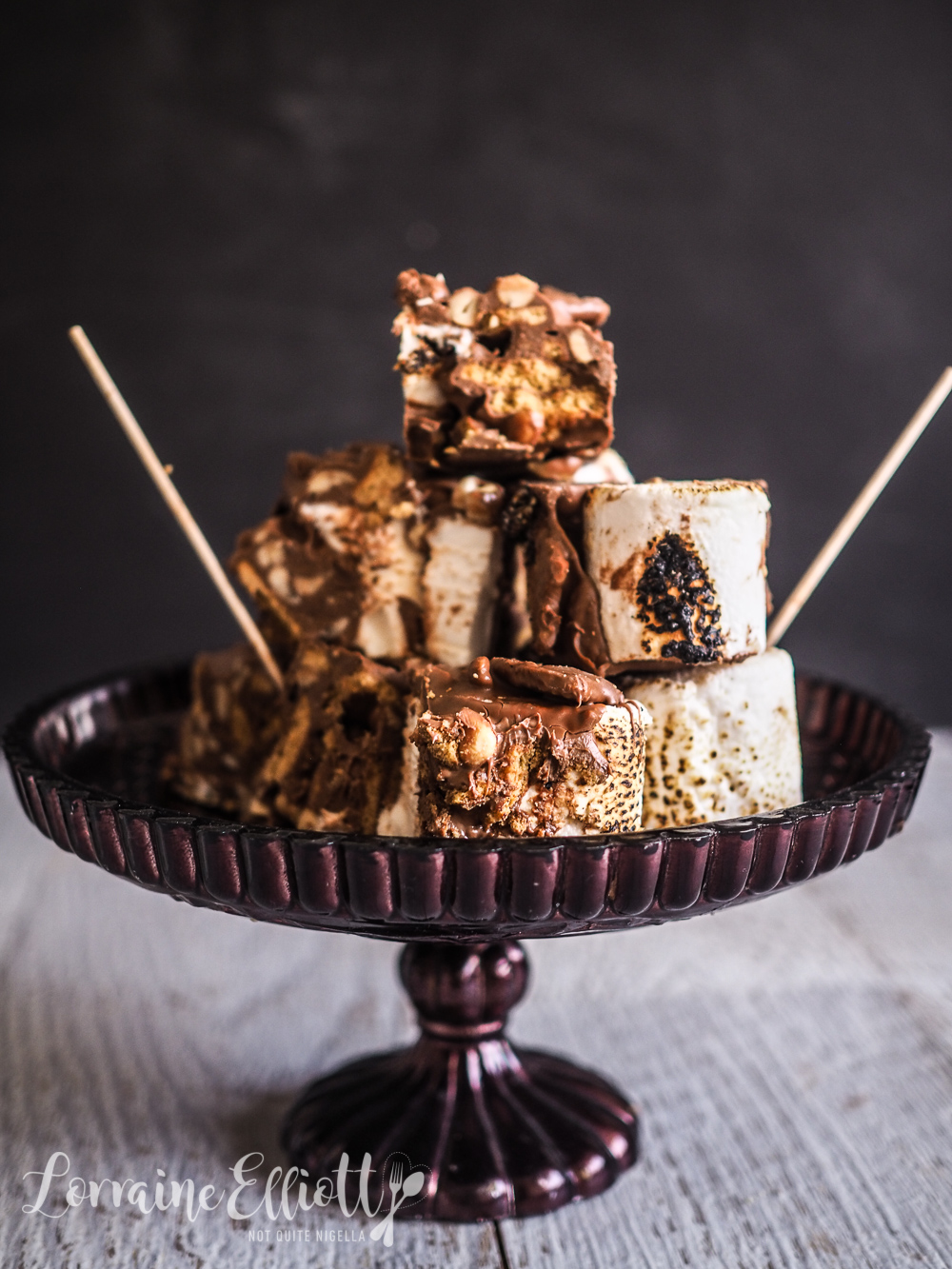