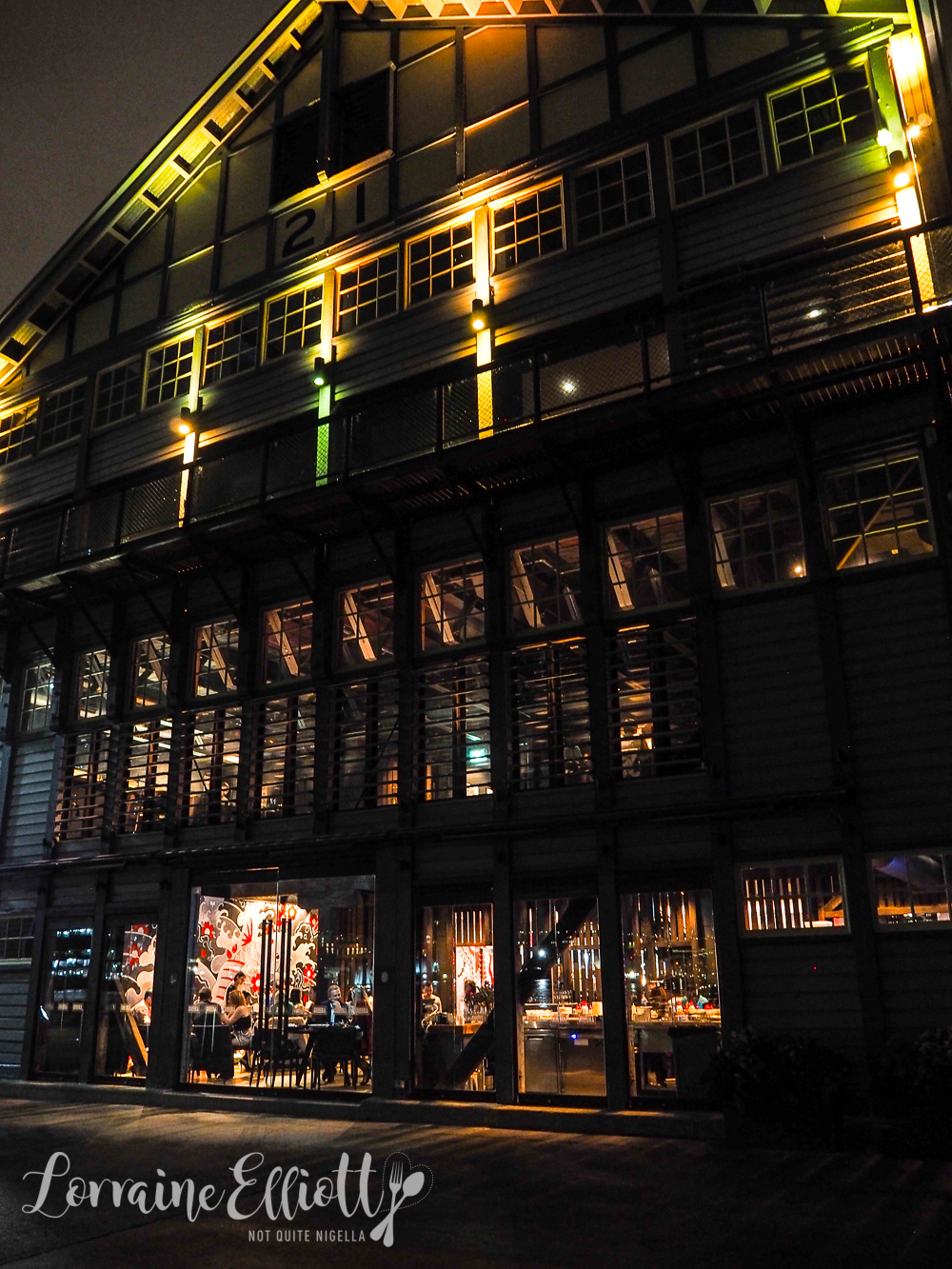 CHUUKA is the newest signature restaurant from The Star. It is located in the historical building on Jones Bay Wharf that formerly housed Flying Fish. It is a contemporary Chinese restaurant joining the forces of Sokyo's Chase Kojima and Melbourne's Lee Ho Hok's Victor Liong. 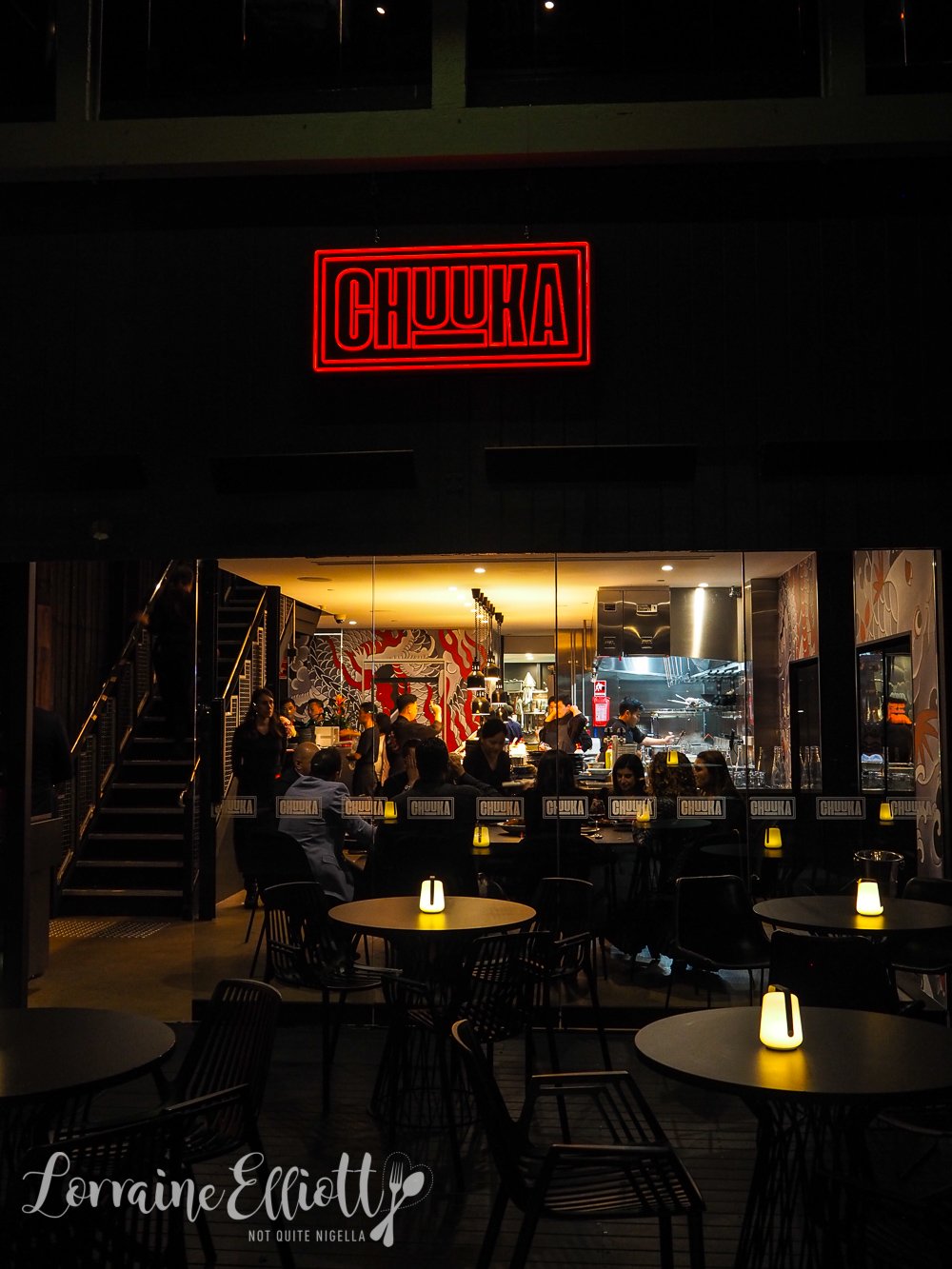 The raw bar serves up dishes like sashimi with Chinese condiments while other dishes include chawanmushi with foie gras and blue swimmer crab or Chase's yuzu fried chicken. Desserts are also a highlight with their frozen yogurt service for two as a drawcard. 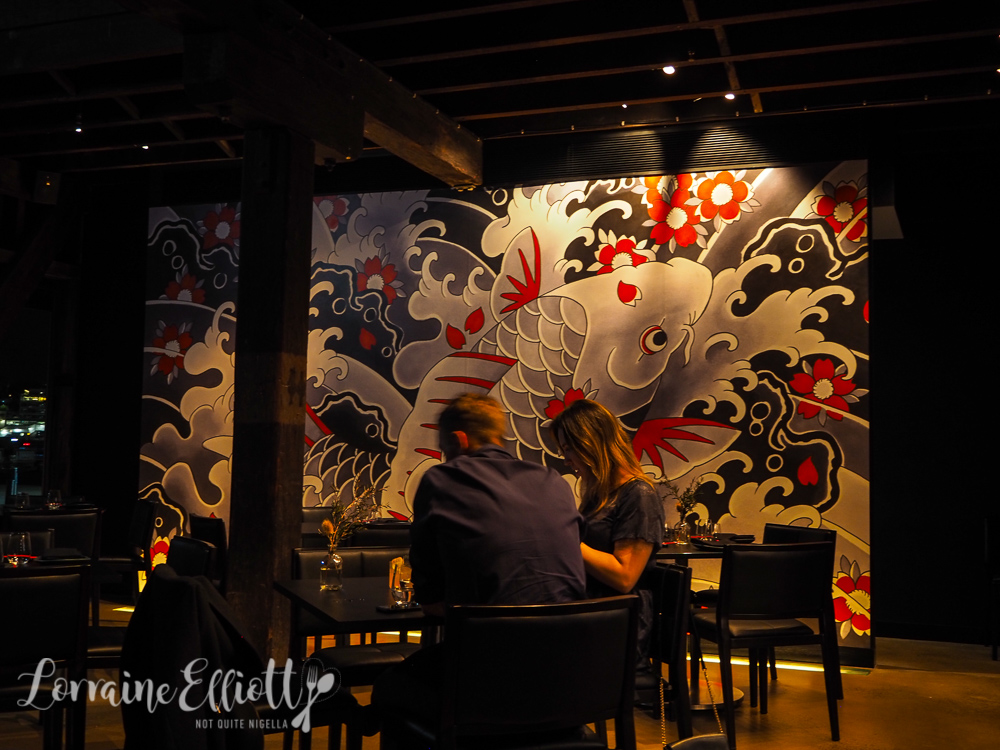 CHUUKA is the first outpost of the Star and retains the same vibe as The Star albeit in a sophisticated style of setting thanks to the heritage building. The cuisine is described as Chinese using Japanese ingredients and technique. Chase says "I wanted to do a Chinese restaurant. Sokyo is Japanese and CHUUKA is Chinese." 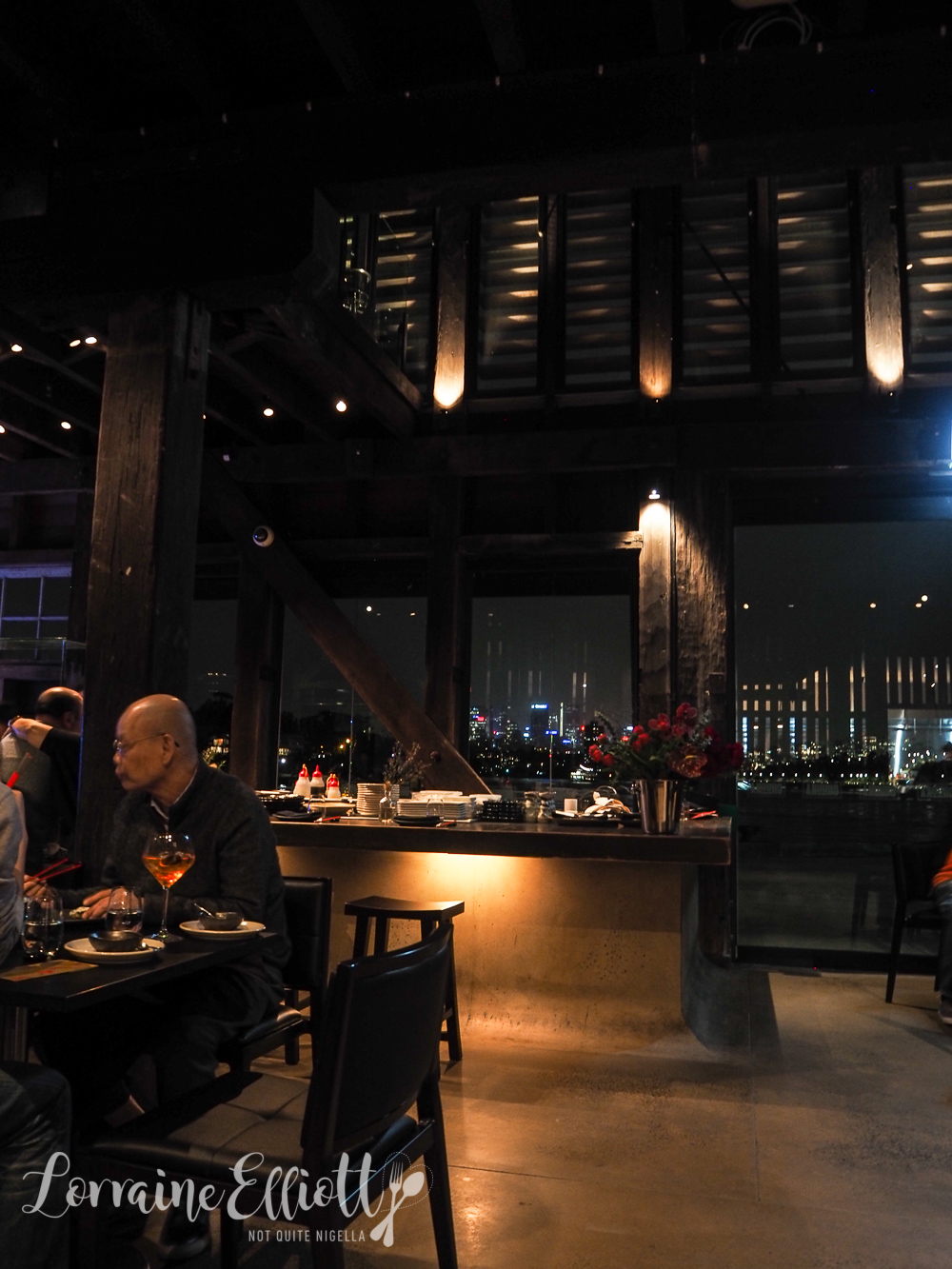 Chuuka or Chūka is the name for Chinese cuisine in Japan that has been modified over the years to suit the Japanese palate. Chase partnered up with chef Victor Liong of Lee Ho Fook in Melbourne. There are paintings of koi fish to represent Chase and the dragon to represent Victor by local tattoo artist Deepak Munsami. 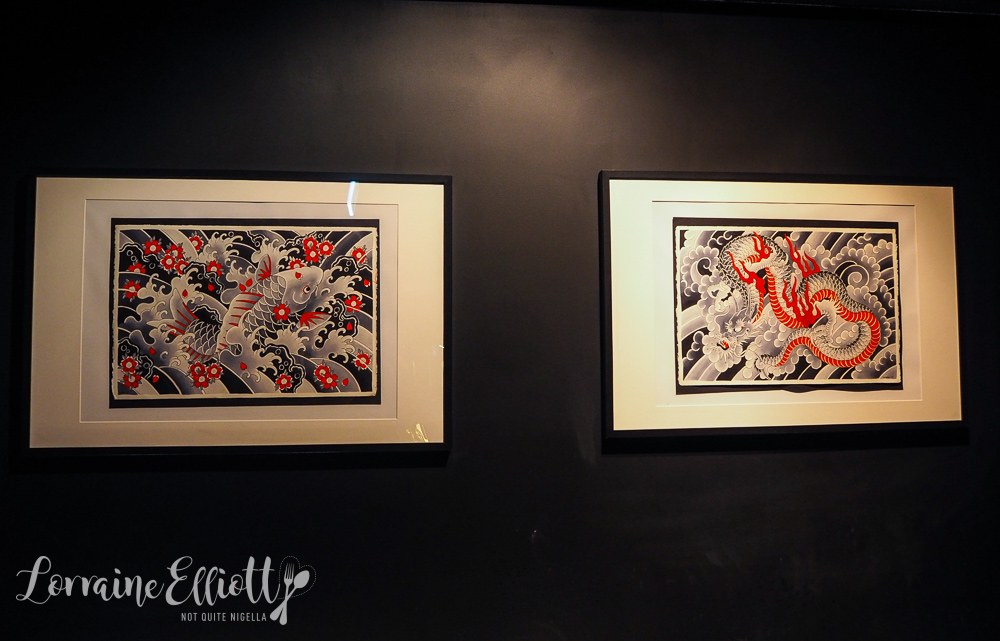 There's still the bar section outside with its own separate menu although on this cold and wet winter's evening people are dining inside. Inside they've kept the raw bar with sushi chefs preparing the raw offerings and the menu features a CHUUKA roe service with trout roe, sea urchin roe and Siberian caviar. 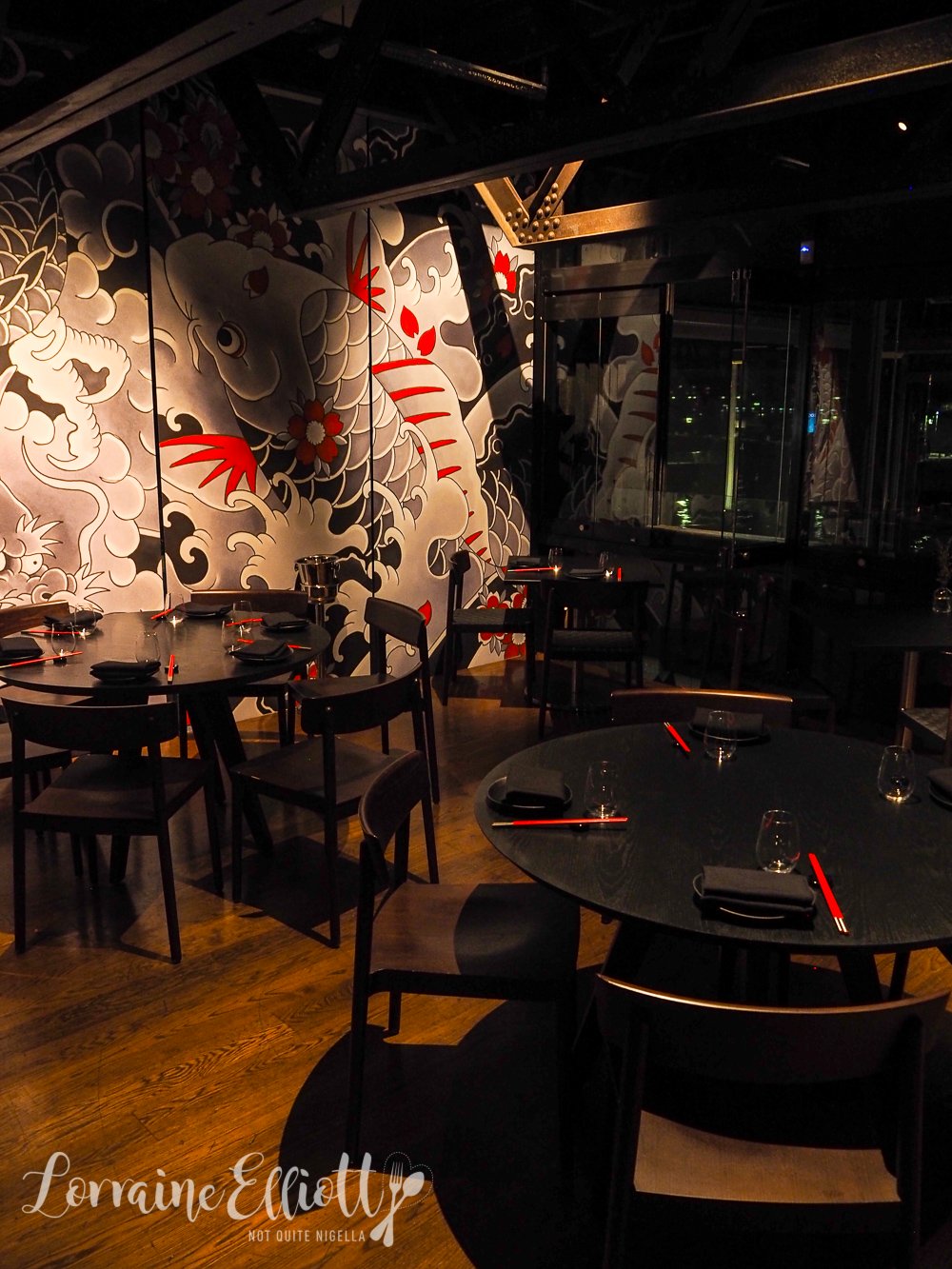 It is early days yet so the service although very friendly does have gaps in knowledge (eg mistaking kingfish for sea urchin). Also the valet service and parking is gone so if you are dining there you will have to park across the road or get let off in your Uber and walk the length of the wharf rather than drop your keys (high heel warning!). 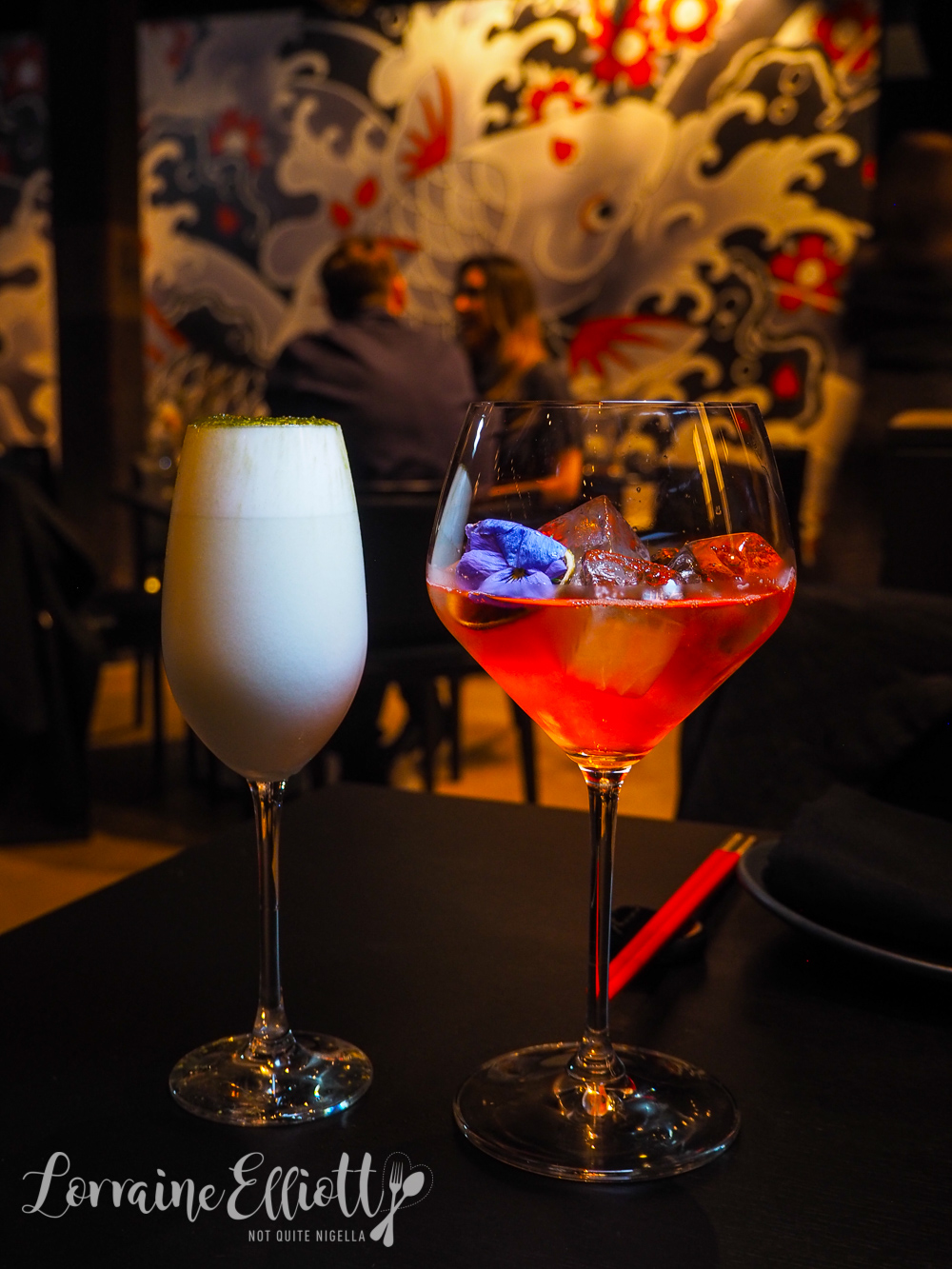 The cocktail menu references the five Chinese Elements: Wood, Fire, Earth, Metal and Water. Our cocktails are the Ichi and Ni, the Ichi a riff on the Aperol spritz. It's slightly sweeter with apricot brandy and nashi soda paired with Aperol. The Ni is a creamy Pisco fizz with coconut cream, matcha, citrus and egg white foam. 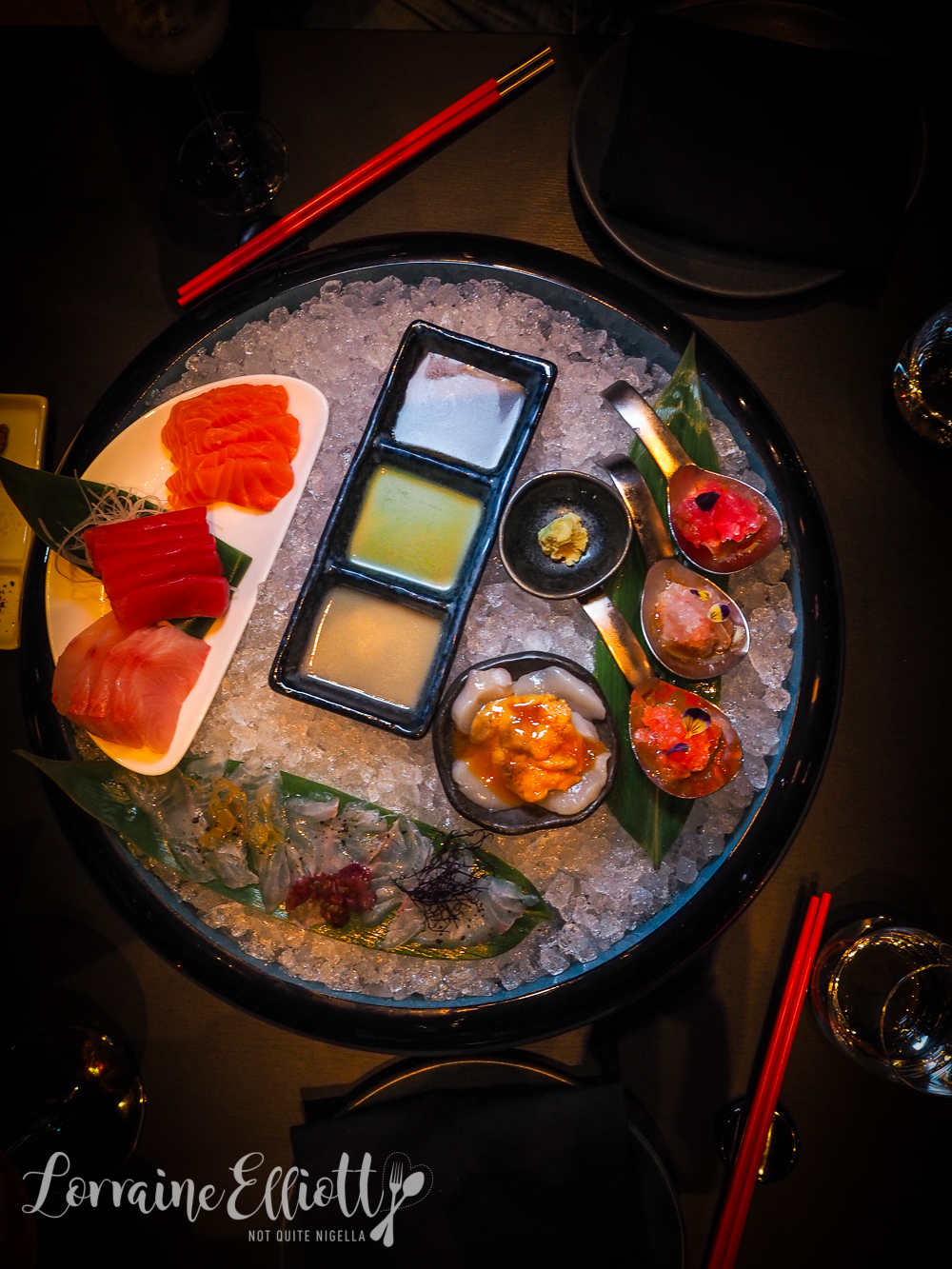 Our first item is on the raw bar menu. The sashimi selection has buttery soft slices of tuna, kingfish and salmon as well as the three finely chopped and seasoned on spoons. There is also thinly sliced kingfish as well as sea urchin and scallops. These morsels come with three Chinese dipping sauces: spicy plum, a green chive and garlic sauce and a sesame dipping sauce. The green chive and sesame go particularly well with the raw fish. 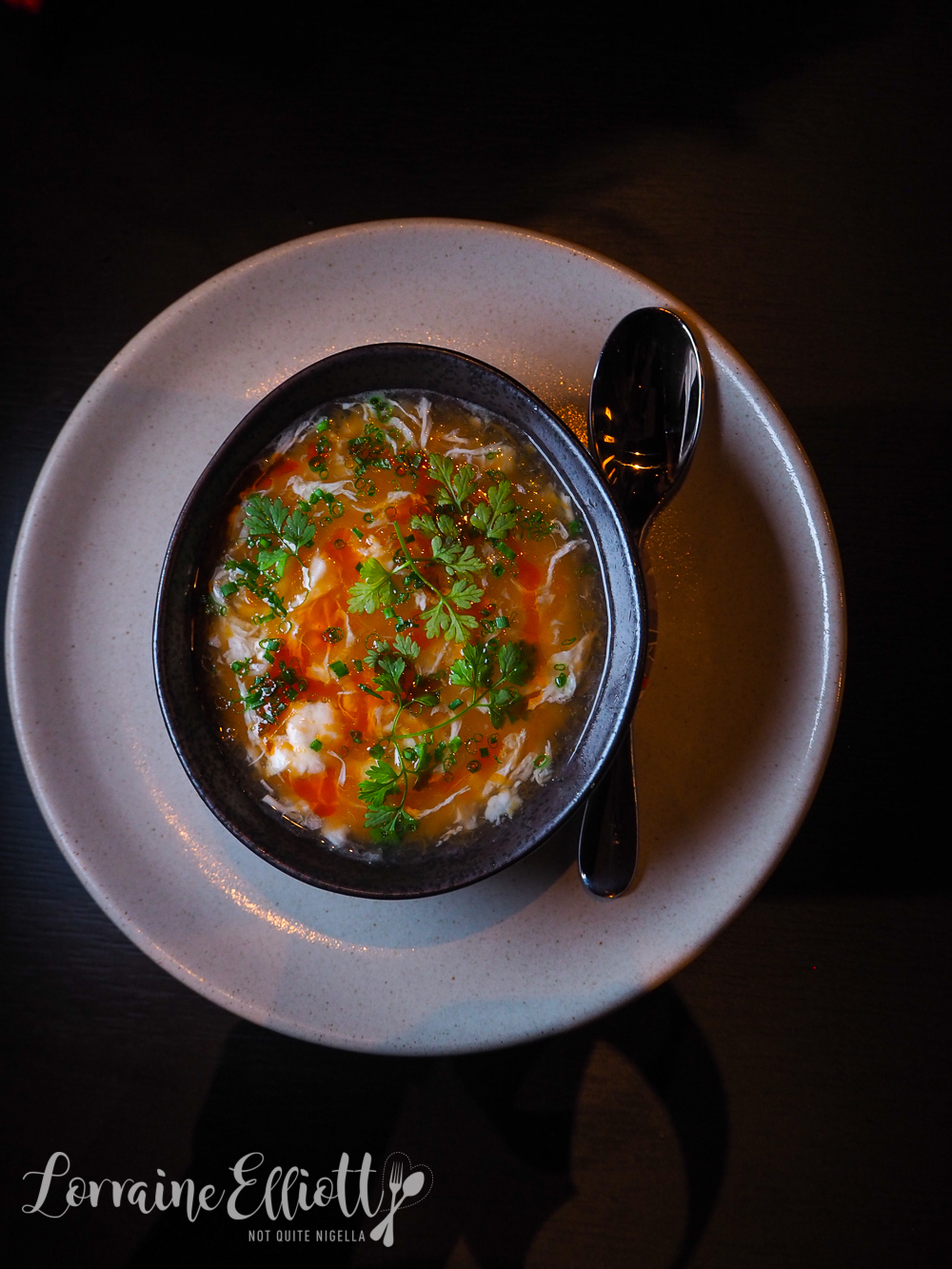 The chawanmushi steamed foie gras custard has blue swimmer crab, carrot and ginger sauce and shellfish essence. It's lovely and wobbly although we don't get a lot of foie gras flavour to it. This is a dish more about textures. 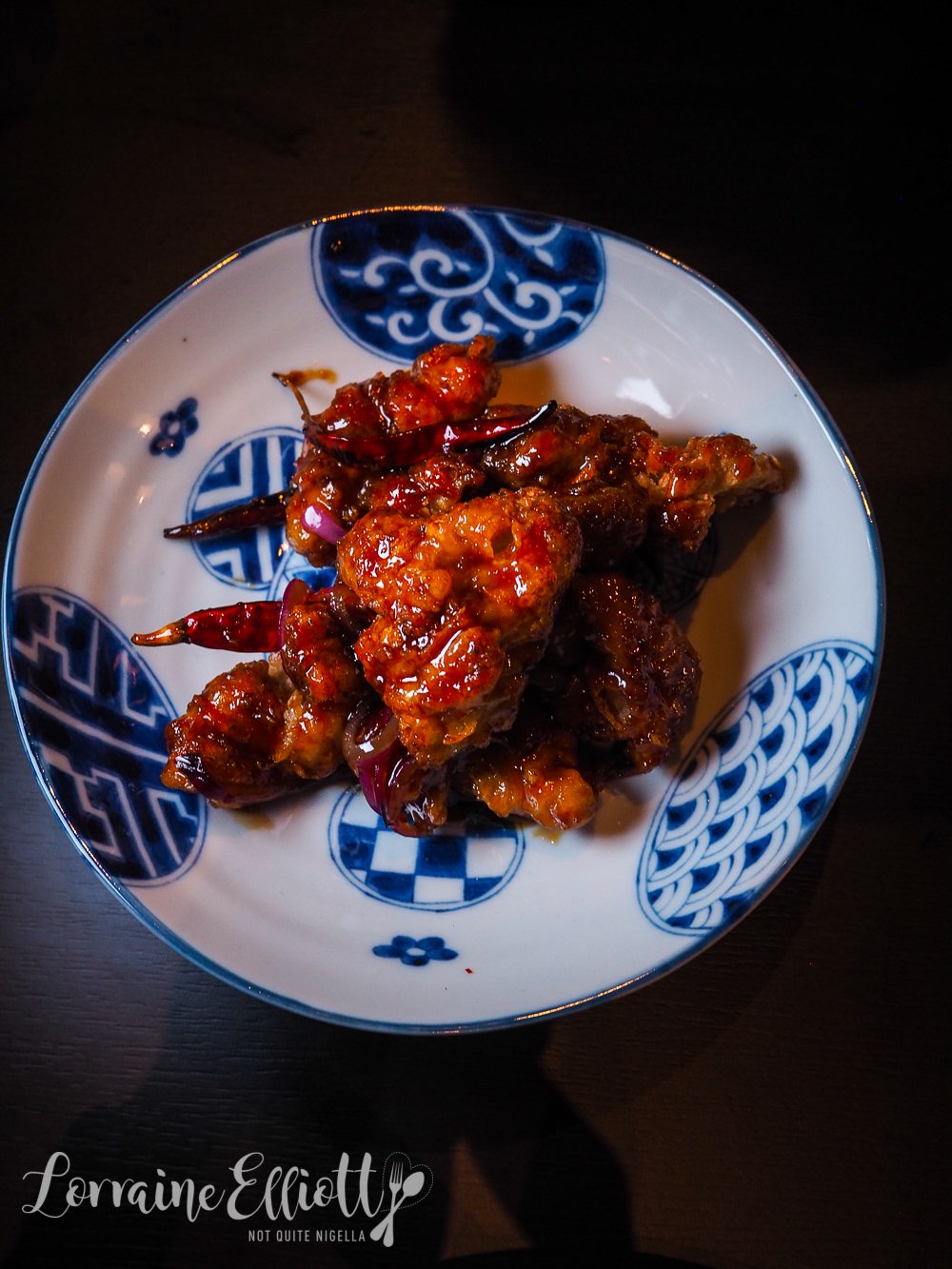 The yuzu chicken is one of the most popular dishes. The chicken fillets are soft and melt in the mouth and have a sticky sweet sauce with dried chillies and a hint of yuzu right at the end. I'd suggest ordering this with some plain steamed rice as it can be intense and sweet and you do want to finish it as it's very tasty. 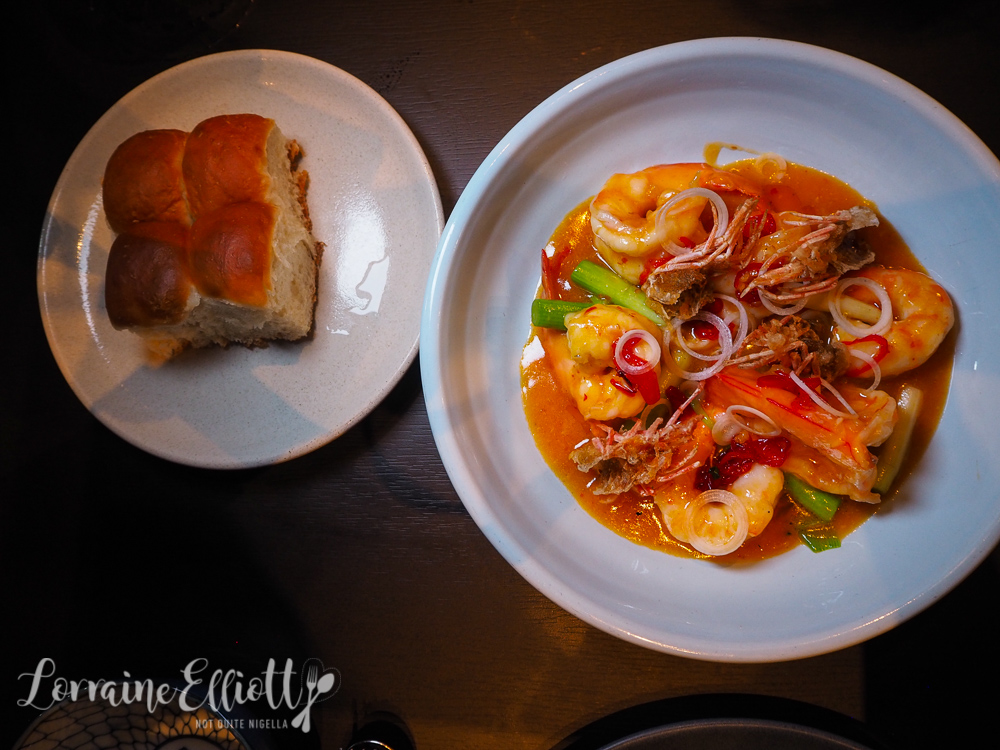 My favourite are the prawns with chilli miso butter and four Hokkaido milk buns, a version of Mantou buns. The prawns are superbly tender and bathed in a chilli miso butter sauce. You dip the downy soft white buns into the sauce and eat them with the prawns. And don't forget the prawn heads-these are delicious and deep fried until super crispy. I urge Mr NQN to try them as he usually gives them a miss and he likes them although I should have kept the prawn heads a secret because now I may have to share them. 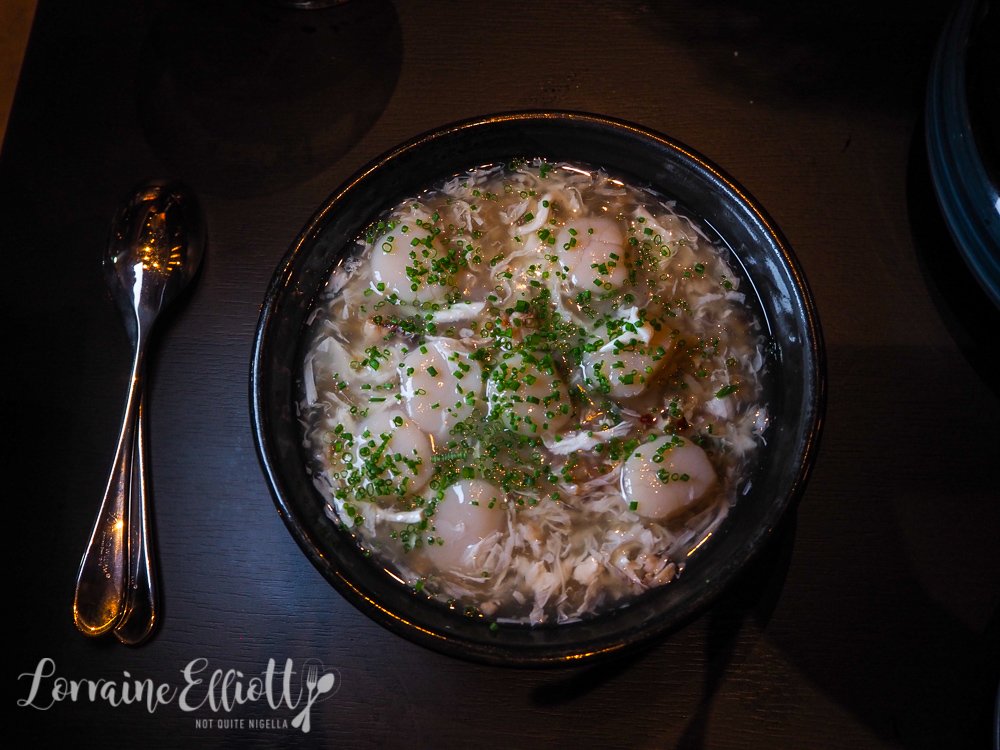 CHUUKA's fried rice is a version of Fujian fried rice with a gravy topping. Here it comes with a saucy layer generous with scallops and blue swimmer crab and Japanese XO sauce. Chase explains that the Japanese XO sauce is quite similar to the Chinese version although more soy sauce and more types of fish rather than it being predominantly shellfish based. Chase also uses an arrowroot style thickener instead of cornflour which gives it a smoother mouthfeel than cornflour. I especially love it with a bit of Szechuan chilli paste from the Sichuan eggplant below. 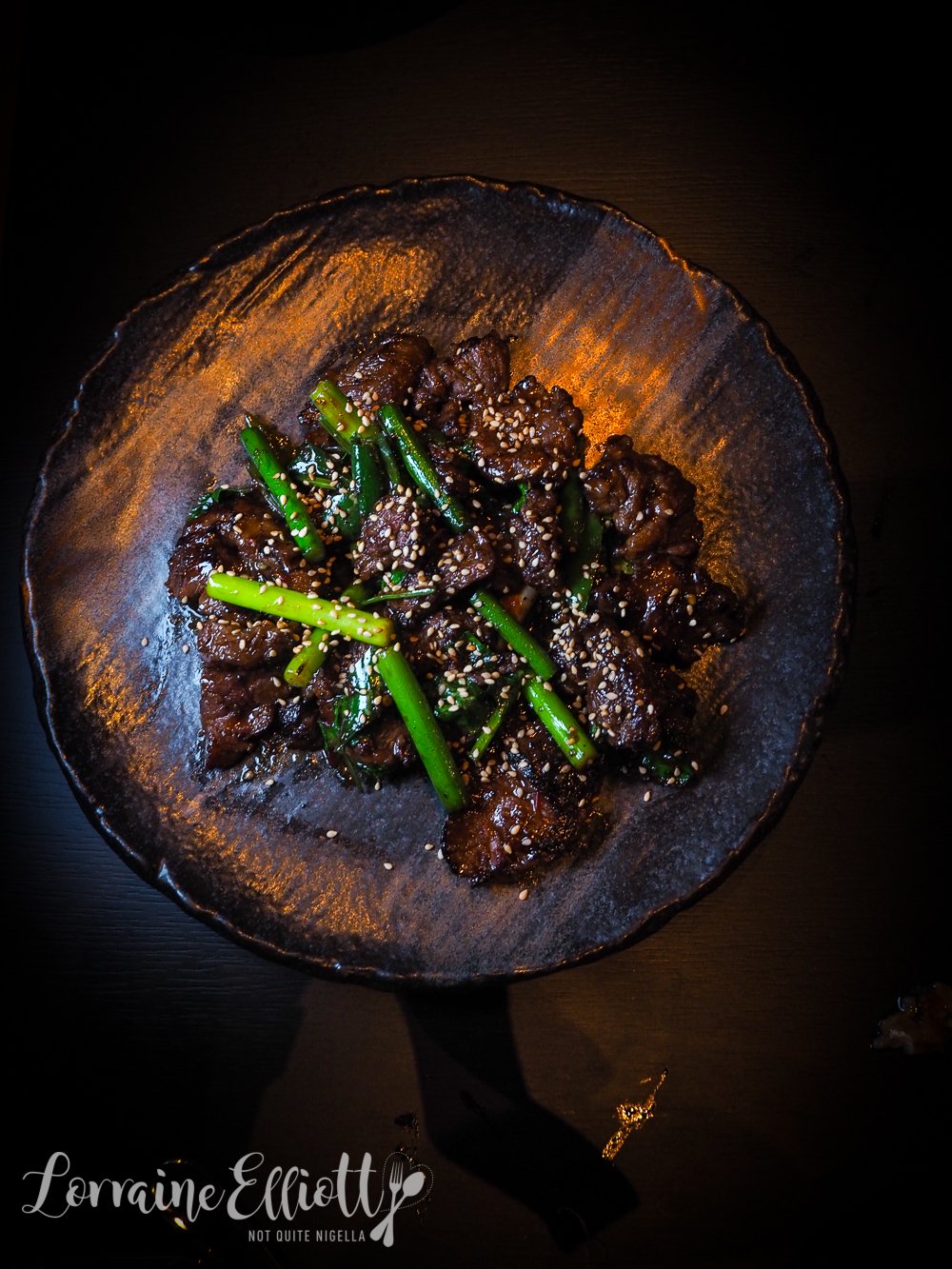 I have this thing for intercostals. Whenever I see them on the menu I want to order them because I love the texture of them (fatty, juicy and almost tongue-like). The wagyu intercostals are stir fried with green chilli, garlic stems, coriander and sesame seeds. Even fat phobic Mr NQN enjoys these and polishes off most of them and they go well with the Chinese potatoes below. 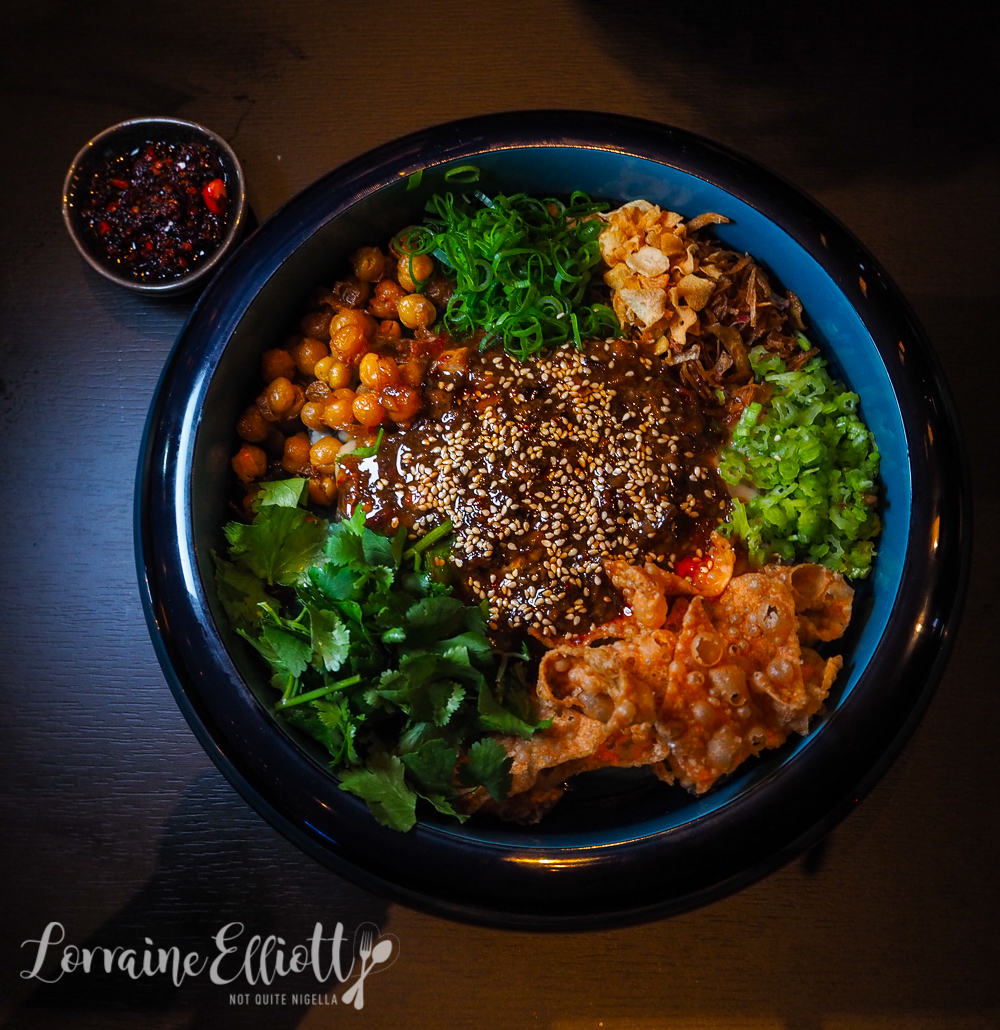 Honestly I had expected an entirely different dish-perhaps deep fried eggplant batons with a sticky, sweet and spicy sauce. So when they set down the eggplant my brow furrows as I try and remember what we had ordered. The Szechuan eggplant has soft eggplant batons, puffed chickpeas, crispy garlic, fried wonton skins and a white miso and sesame dressing. It's a bit like a cross between a buddha bowl and yee sang salad-toss it together and add the Sichuan chilli paste provided on the side. 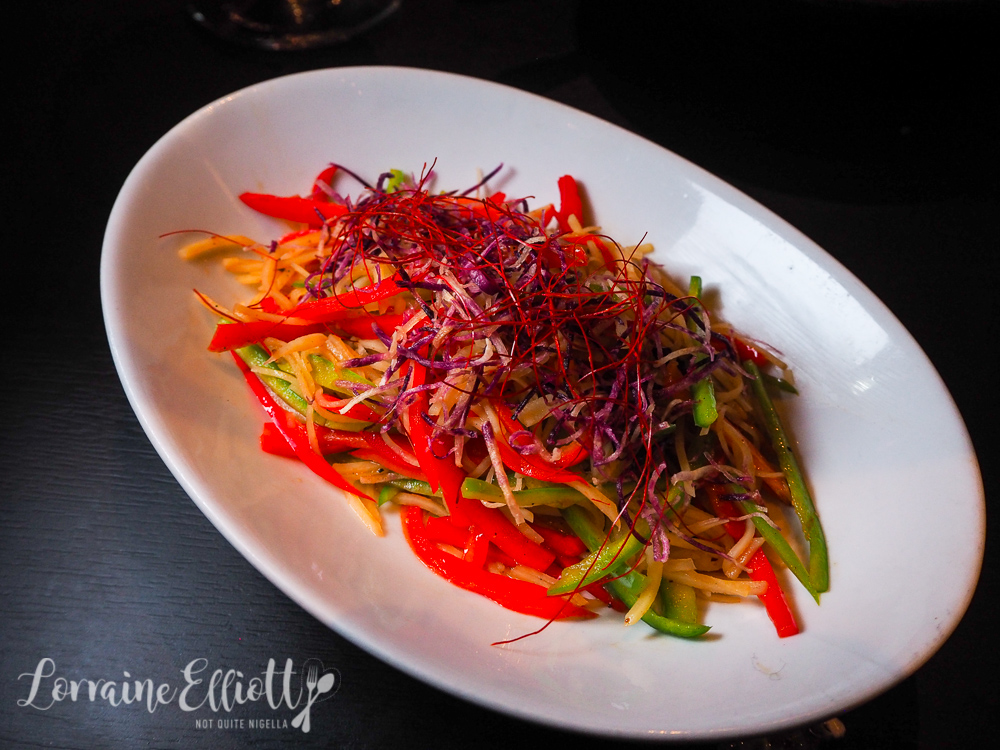 I first tried Chinese potato salad in Guilin and wondered why we don't see it more in Australia. They're thin strips of potato cooked so that they still have a little bit of bite to them and here they are paired with green and red capsicum, garlic, white soy and vinegar dressing. It's a good accompaniment to the beef intercostals and a nice balance against the richer dishes.

Normally at Chinese restaurants, desserts are a bit of an afterthought, something usually like deep fried ice cream or lychees and ice cream (I was even once served a Monaco bar for dessert - I wish I were kidding). But at CHUUKA dessert is kind of a big deal. They hand us folded up origami dessert menus that detail individual desserts like Japanese purple yam ice cream with sago and blueberries or chocolate mousse with Chartreuse, matcha and gemaicha ice cream. Or you can succumb to the temptation of their frozen yogurt service for two. 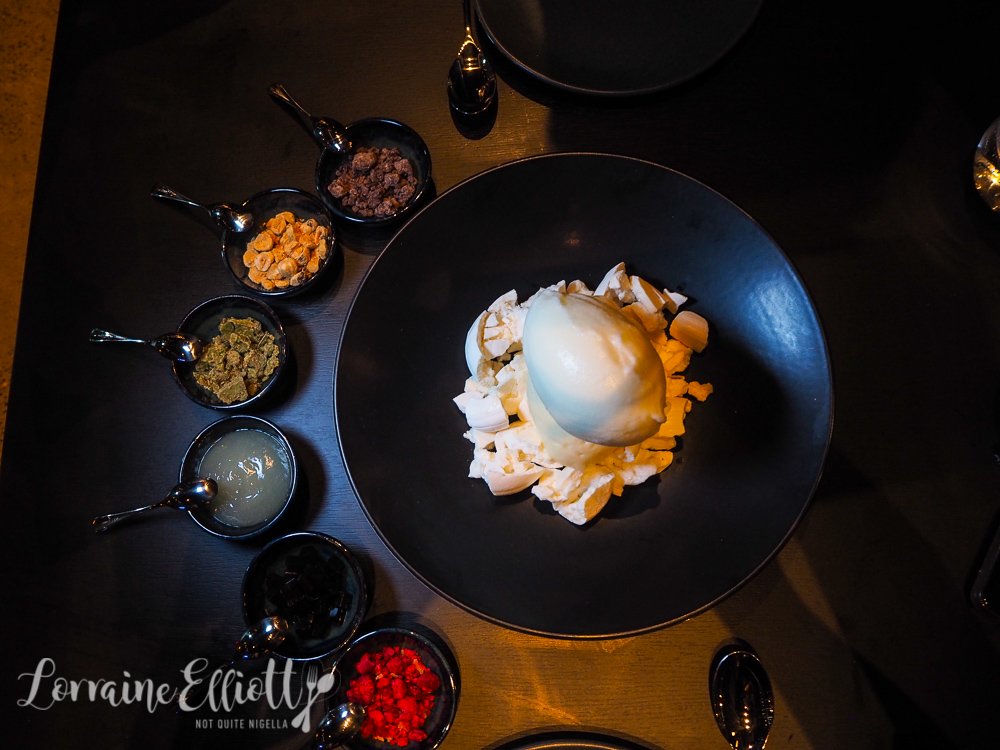 It comes out as two enormous scoops-on top is the frozen yogurt and on the bottom is frozen mascarpone that tastes like cream cheese frosting (albeit a bit less sweet) and these are surrounded by broken meringue. On the side are six accompaniments so that you can choose your own adventure. There are freeze dried raspberries with pop rocks, cubes of coffee jelly, yuzu gel, matcha chocolate wafer crisp, hazelnuts and dark chocolate. It's fun mixing and matching them-I love the matcha crisp with the meringue and frozen yogurt but Mr NQN loves the refreshing quality of the freeze dried raspberries and yuzu gel. And I have to say that it's big enough for four especially if you've eaten savouries beforehand!

So tell me Dear Reader, which dish did you like the sound of the most? If you had to have an animal to represent you, what would it be? And would you opt for a separate dessert or share the frozen yogurt service for two?

NQN and Mr NQN were guests of CHUUKA but all opinions remain her own.