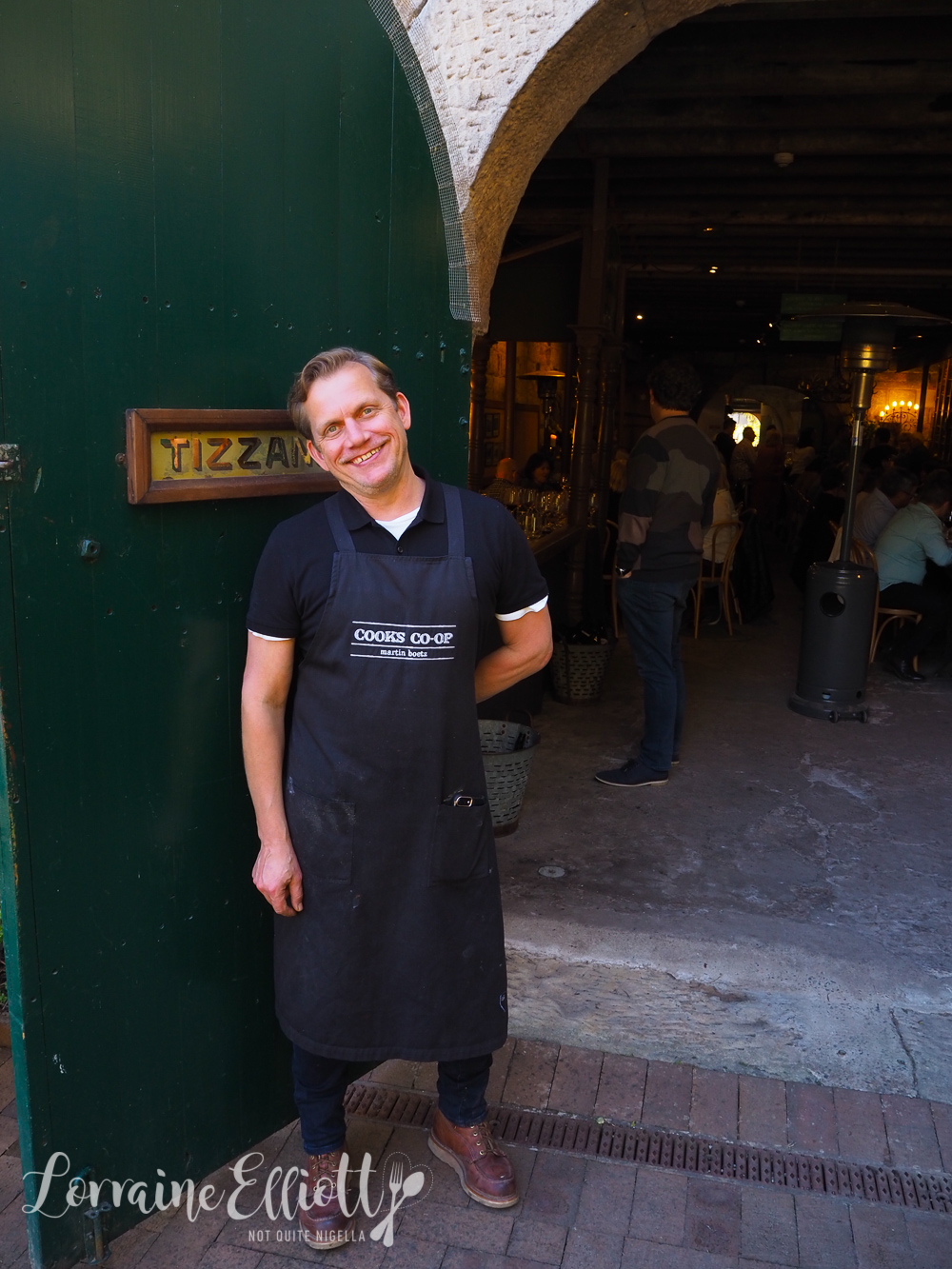 In 2014, former Longrain chef Martin Boetz made the move from Sydney's Kings Cross to Sackville on the Hawkesbury River. Hospitality runs in his blood and through his Cook's Co-op business he hosts lunches and offers a nearby cottage for guests to stay to partake in the Hawkesbury experience.

Martin tells us that after 13 years at Longrain he decided that he was "over it" and started to look for another place to call home. He wanted it to be close by to the city, around 1 and a quarter hours away and started to scope out property in the Hawkesbury. 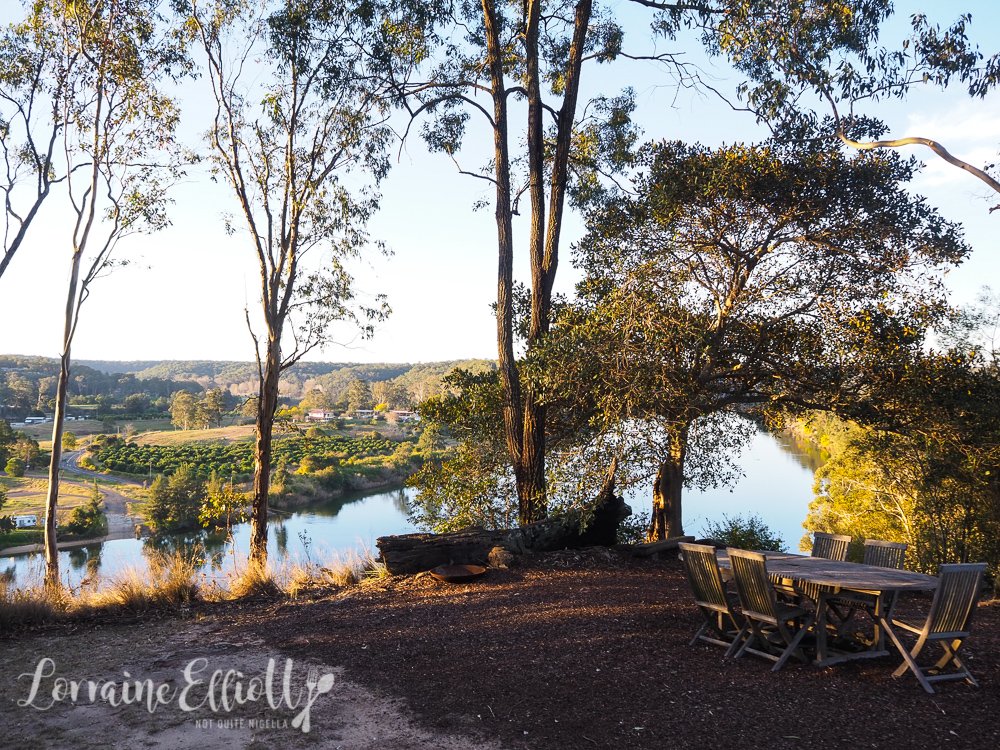 He ended up buying the first place he saw. "It was pretty clapped out with weirdos living in it and overgrown sheds full of rubbish," he says. After making several offers the owner accepted the fourth offer. "And then I thought oh f^&^ I’ve just bought a farm!" Martin says laughing. 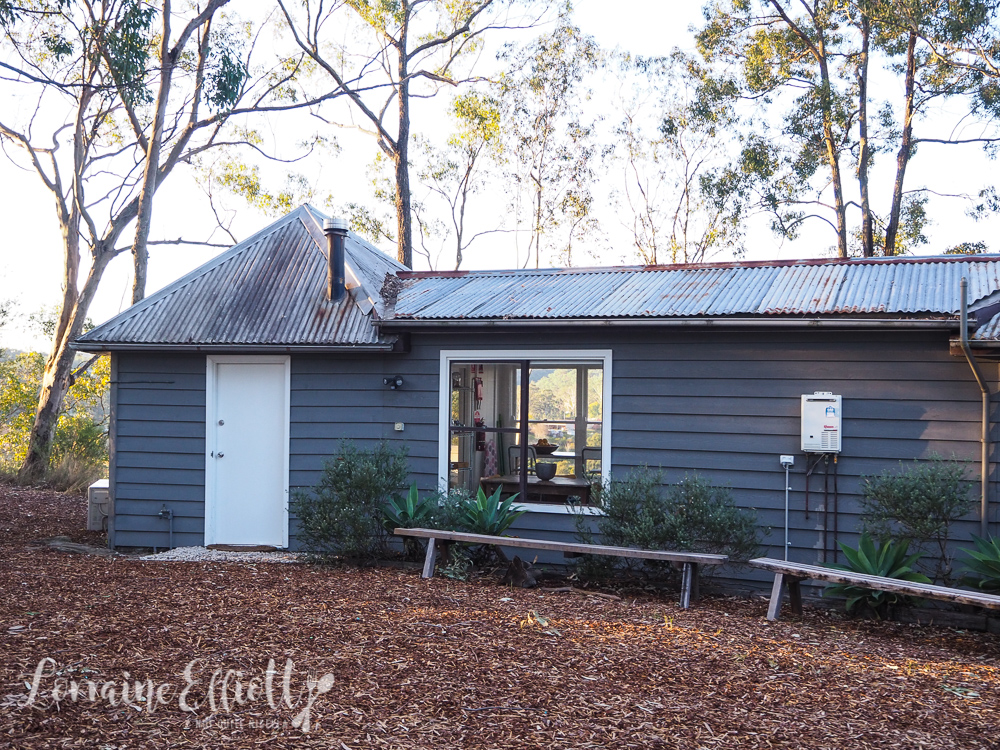 Initially Martin was farming a range of produce on his property bolstered by help from his farming neighbour Tally Matthews. But now because the events take up so much time he has gathered a collection of neighbouring farmers who all produce the same things that he was farming and he now supplies 15 restaurants with Hawkesbury grown produce. At the moment he is delivering citrus fruit, kale, cabbage, potatoes, heirloom carrots and beetroot and even school prawns from a local fisherman. 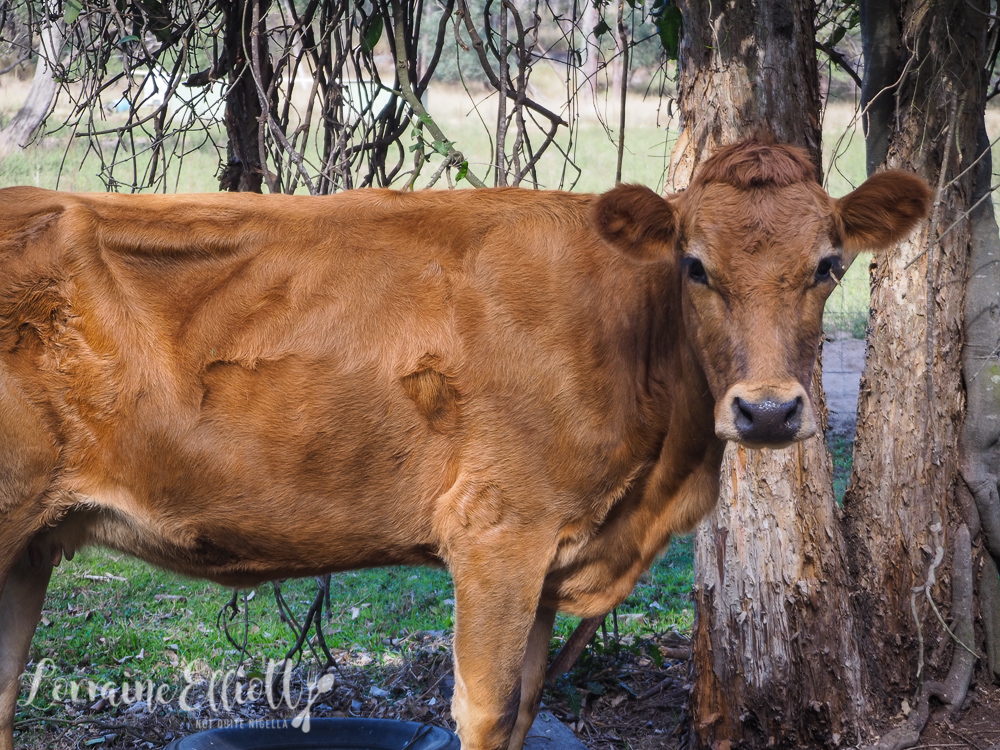 Soon after he moves to the Hawkesbury a couple who were regulars at Longrain came to visit and asked if they could get married in his property's shed; now events are the largest part of his business. Weddings are done country casual style using local ingredients and people can BYO and all food is served family style. 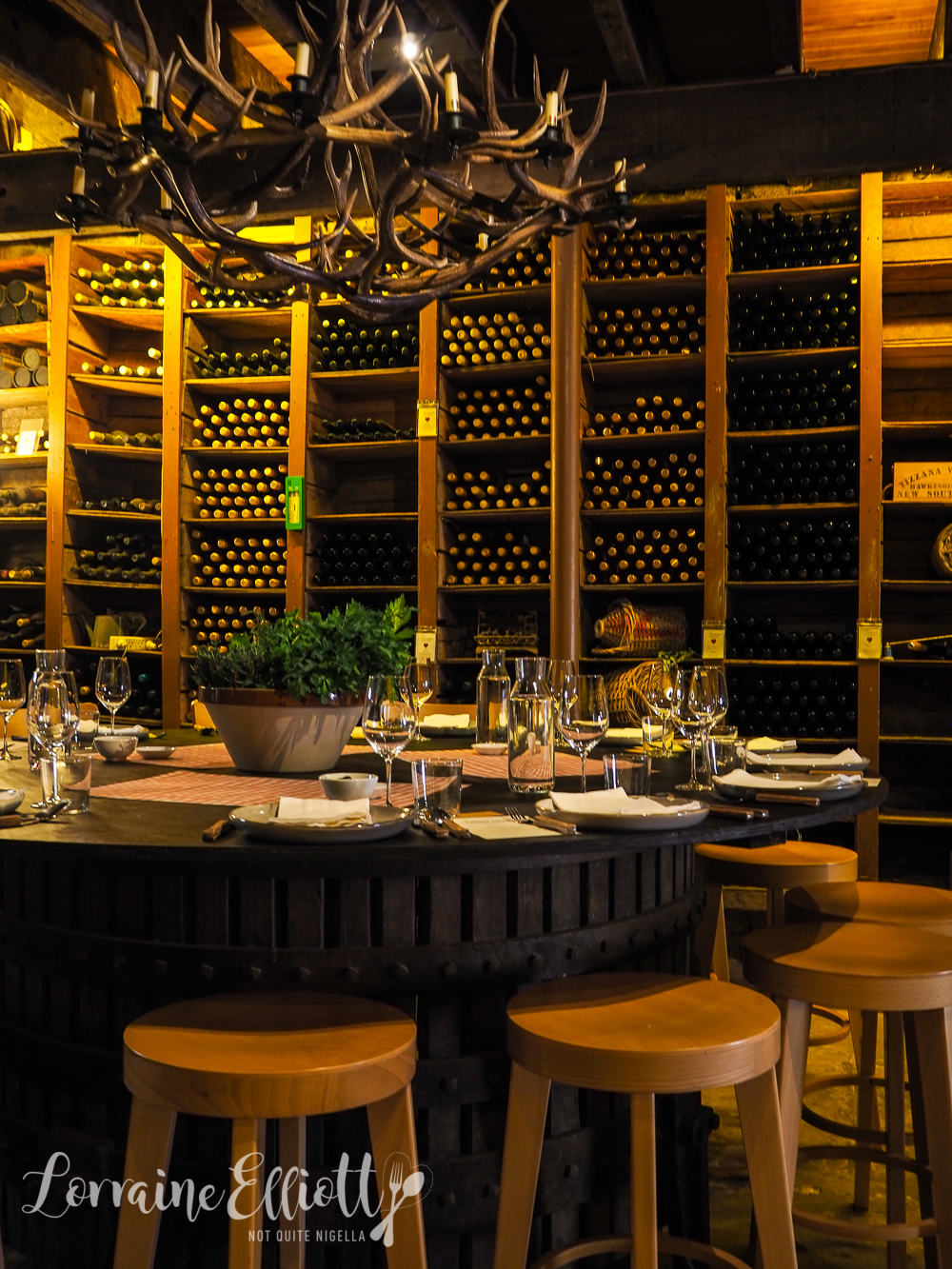 Cook's Co-op also holds regular lunches every weekend and this month's lunches are run in collaboration with Tizzana winery with a different theme each weekend be it Italian, Thai, Chinese or wood fire. 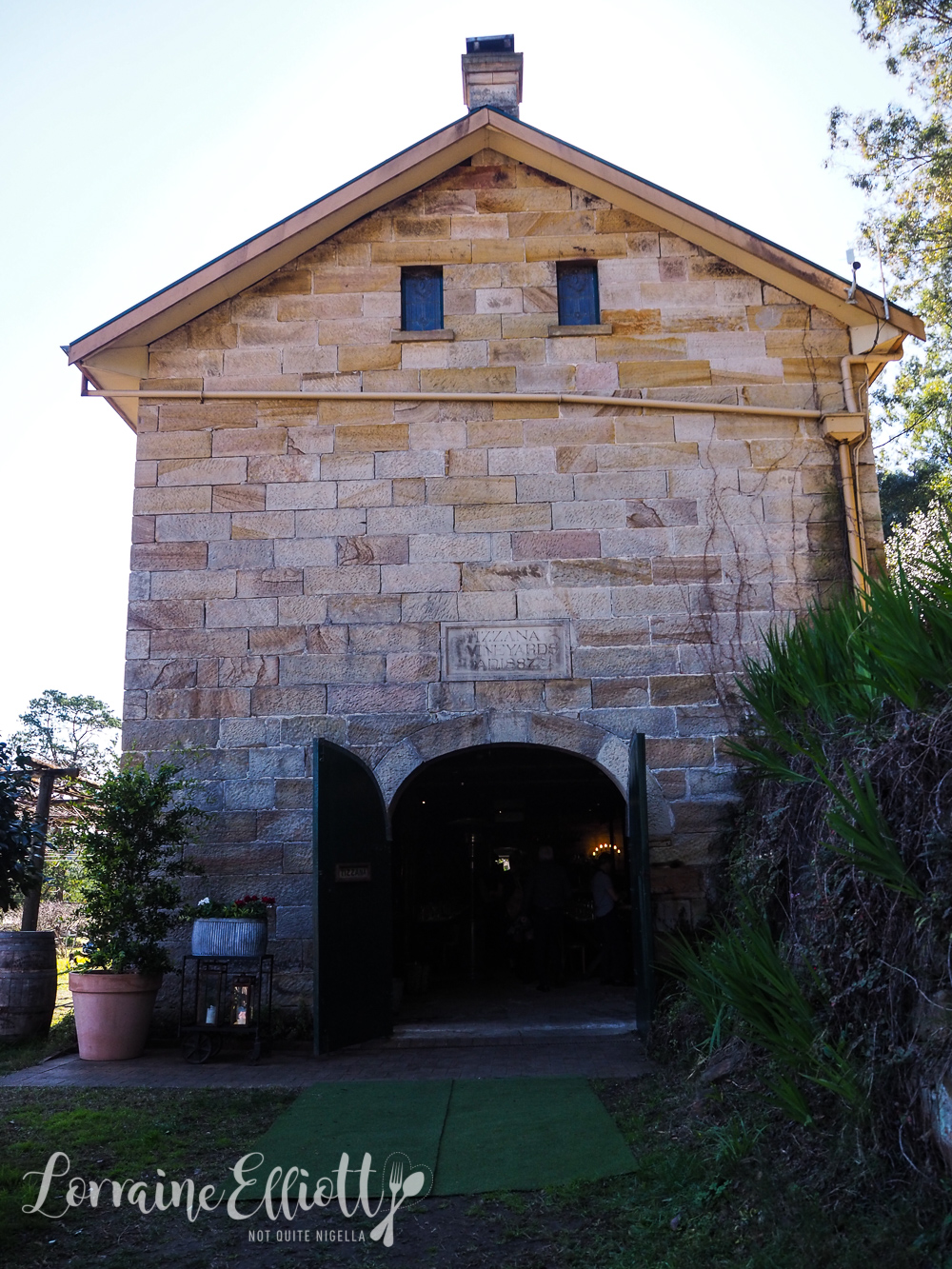 Some also involve collaborations with his chef friends. Sydney based chef pals like Giovanni Pilu and Christine Manfield guest star in his collaborations and on this clear sunny Winter's Sunday we are lucky enough to be visiting when Giovanni and Martin are cooking. 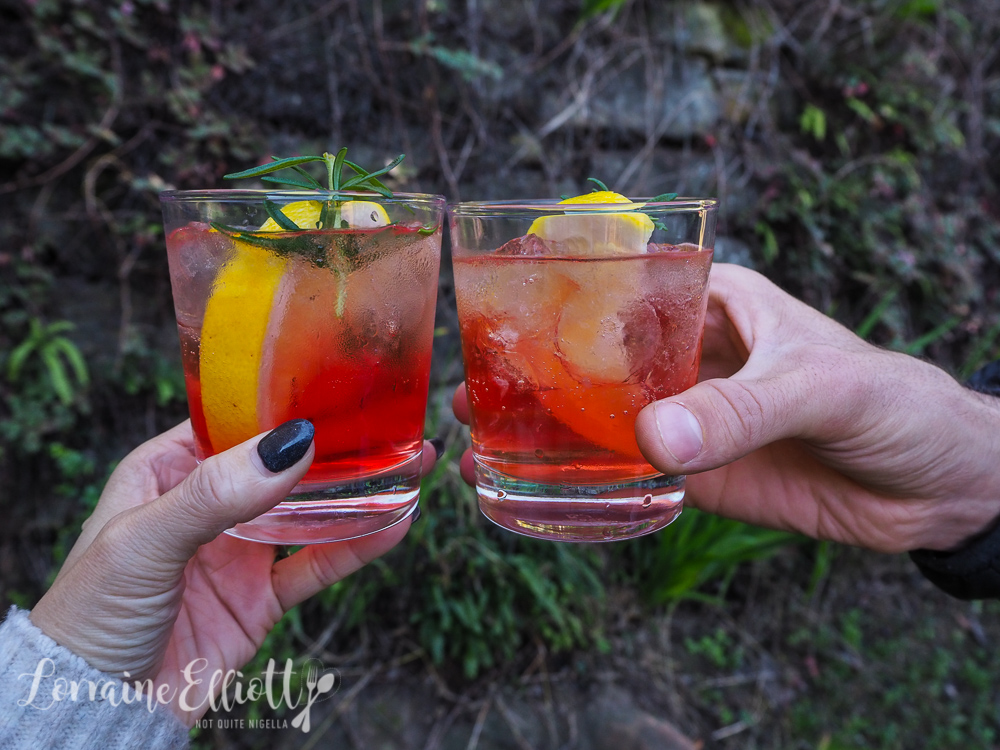 Tizzana winery's sandstone building makes for a picturesque setting for this lunch that starts outside in the garden area where we are offered a Campari spritz with rosemary. They bring around large platters of fried school prawns and artichokes with salsa verde. Martin and Giovanni mingle with guests between food prep. The wines are curated by Martin's friend Lisa McGuigan including a Cook's Co-op Pinot Grigio that Martin blended with Lisa and an Usher Tinkler Merlot that I particularly enjoy. 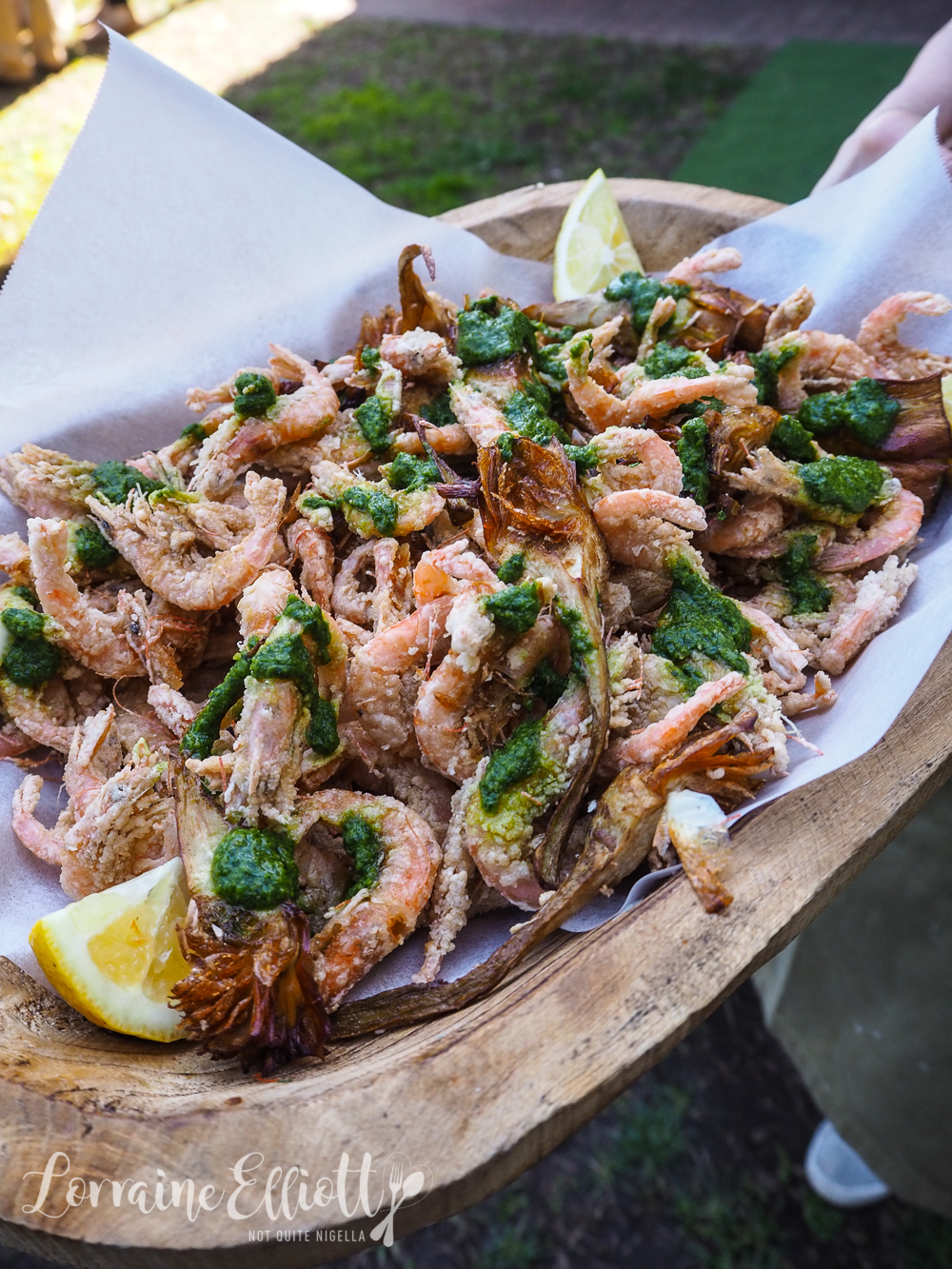 Guests enjoy the perfectly warm winter's day before being called in to the main room. There are two long tables as well as a round table and the walls are lined with treasured photographs and memories of the house that has its roots based in Tuscany. Dr Thomas Fiaschi was a surgeon with an interest in viticulture. He planted the first vines in 1882 and these proved successful that he continued planting more. The area was said to remind him of his time in Tuscany in particular a region called Tizzana. Vandals destroyed the winery setting it on fire reducing it to rubble and in 1969 began a restoration. 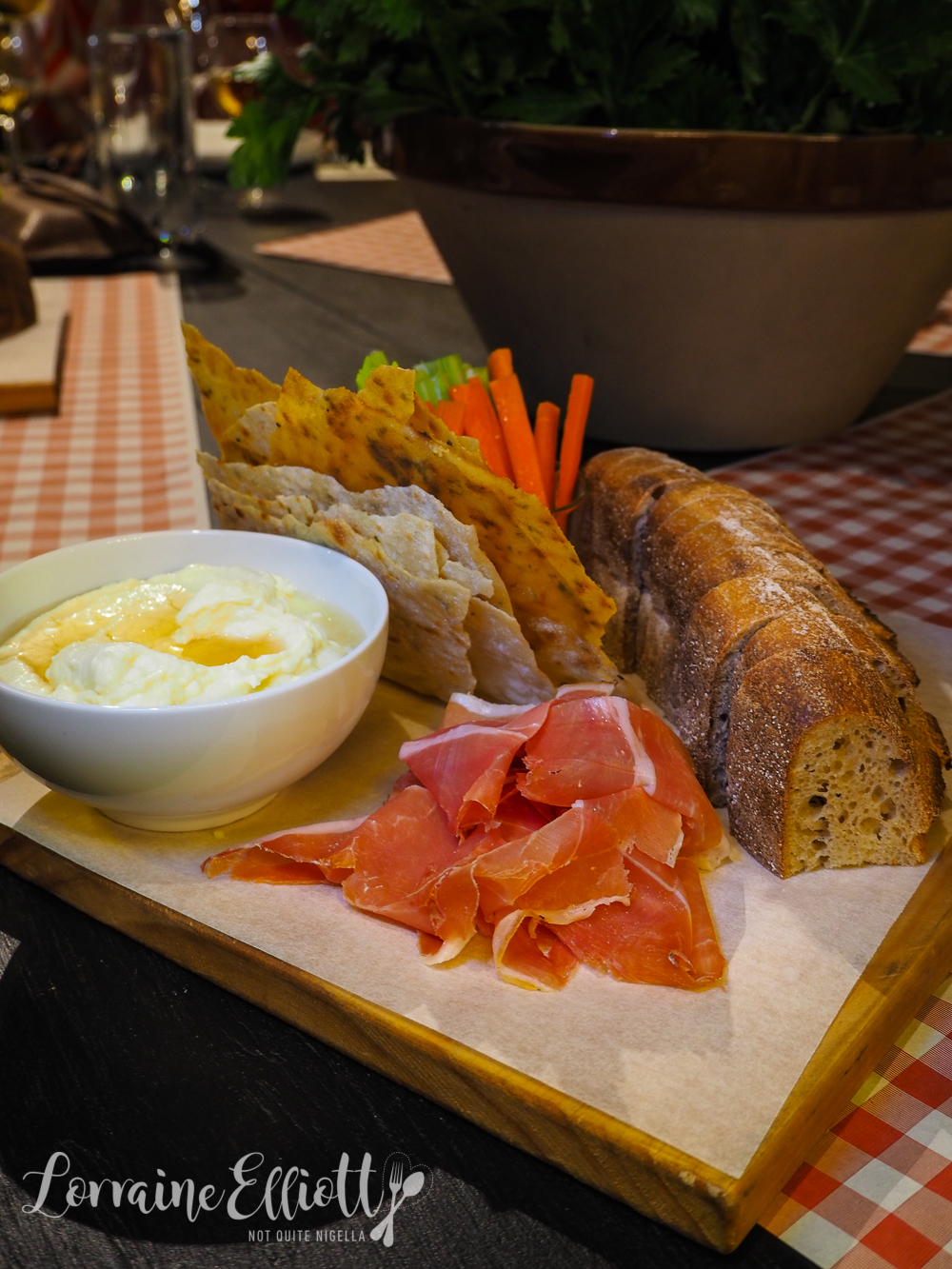 Sitting on the tables share-style are a whipped ricotta with liquid gold honey, crisp breads and locally made wood fired bread by bread maker Lynne Trappel of Bowen Mountain Bread as well as Australian prosciutto. Martin introduces Giovanni who then explains that he wants everyone to buy seasonal and local and so everything that is being served is Australian. I go back for seconds of the divine ricotta and honey on the bread. 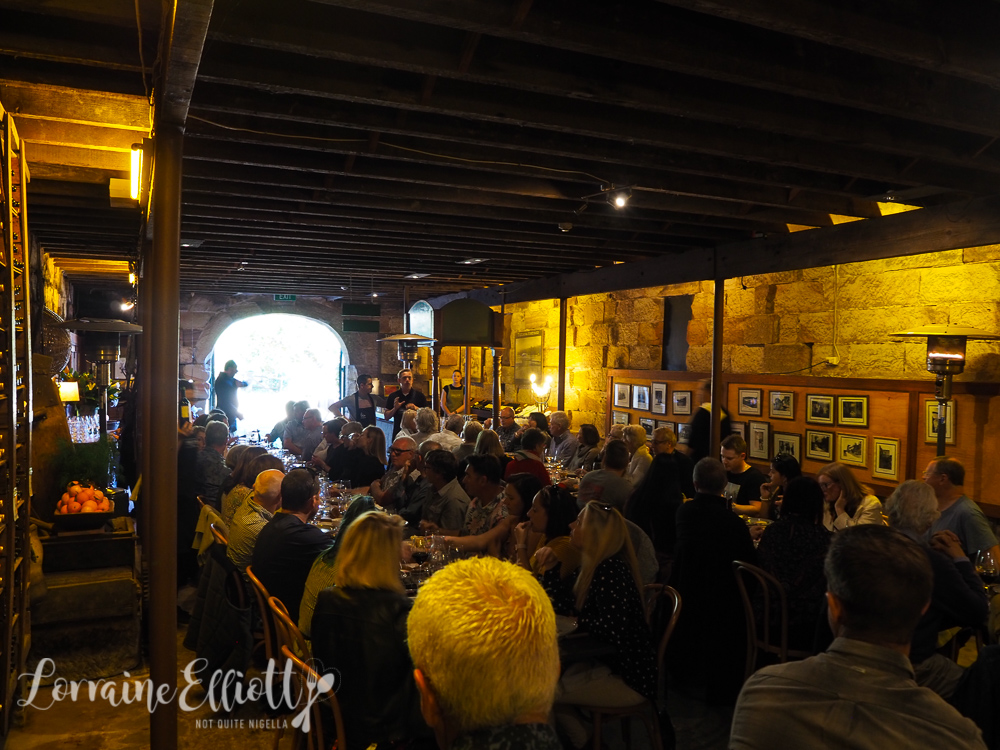 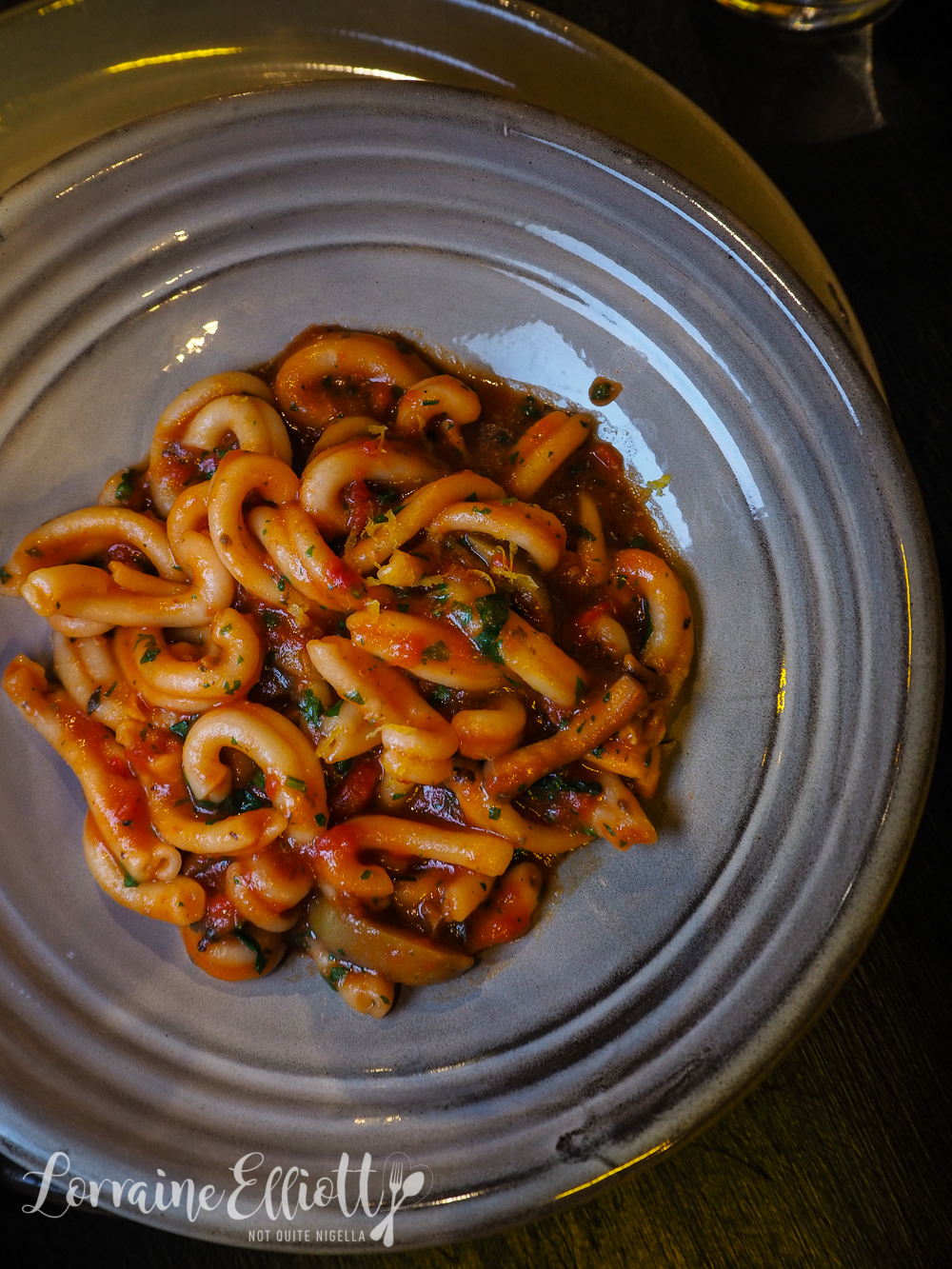 Strozzapreti pasta with calamari ragu with chilli and lemon

The next course comes out and it's a strozzapreti pasta. Remember that priest strangler pasta? Here it is served with a rich calamari ragu with chilli and lemon. The sauce is rich and the strozzapreti soaks up the tomato based sauce in every crevice. Giovanni walks around to each table with an enormous bowl of pasta and offers everyone seconds. 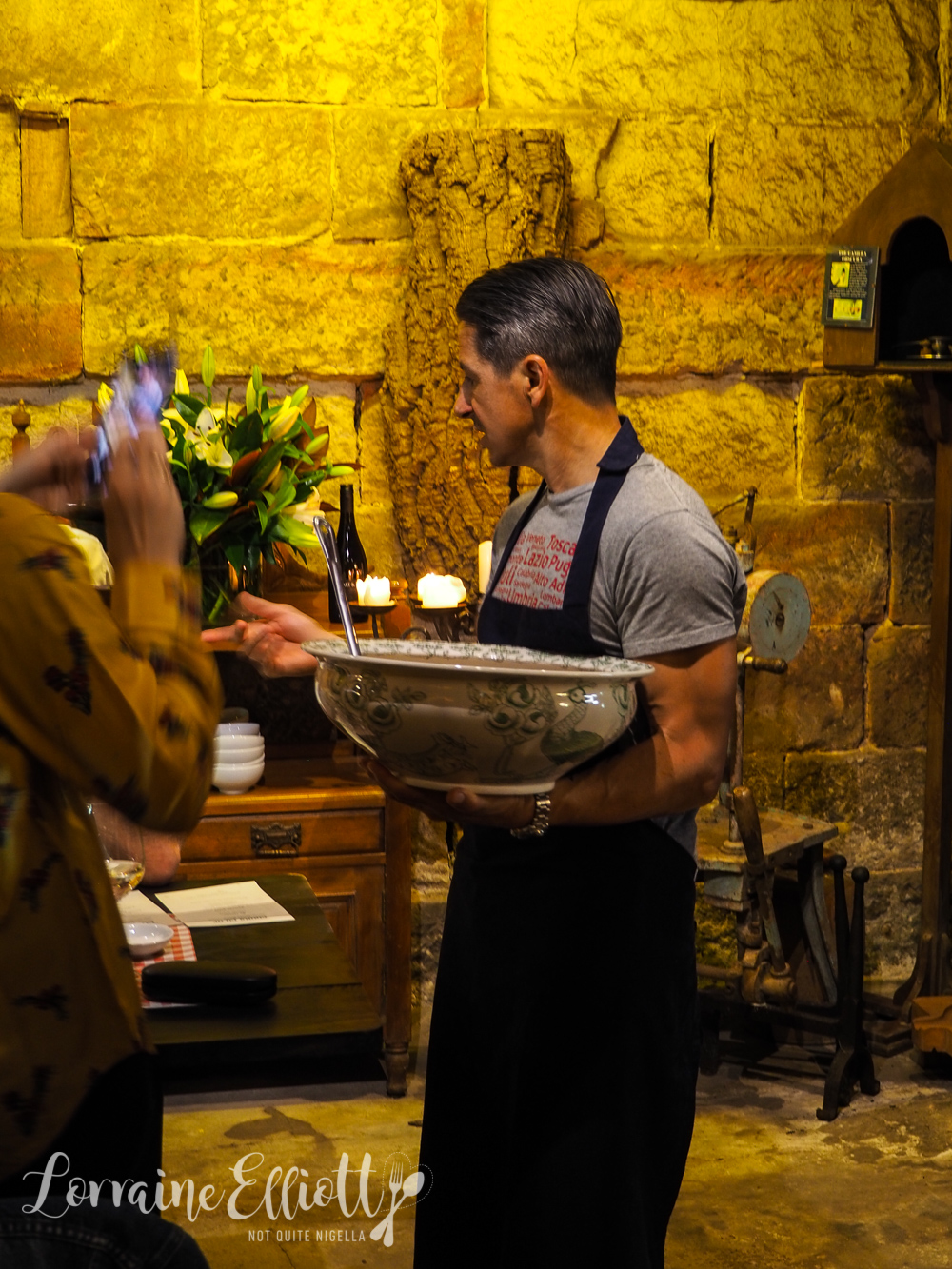 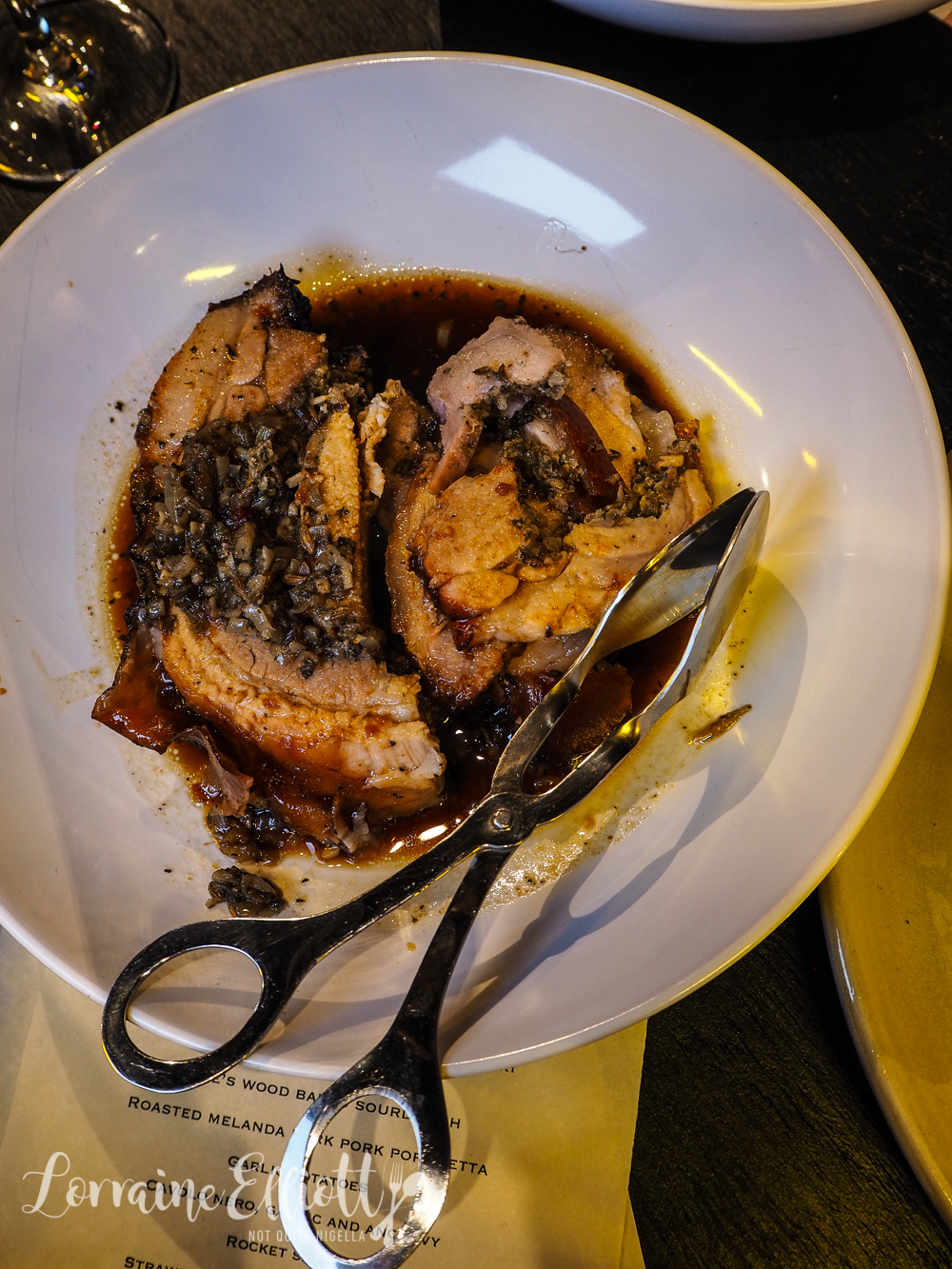 The main comes out share style to share between each couple. The porchetta is filled with a herb and garlic stuffing and the Melanda Park pork has been marinated in Asian aromates. 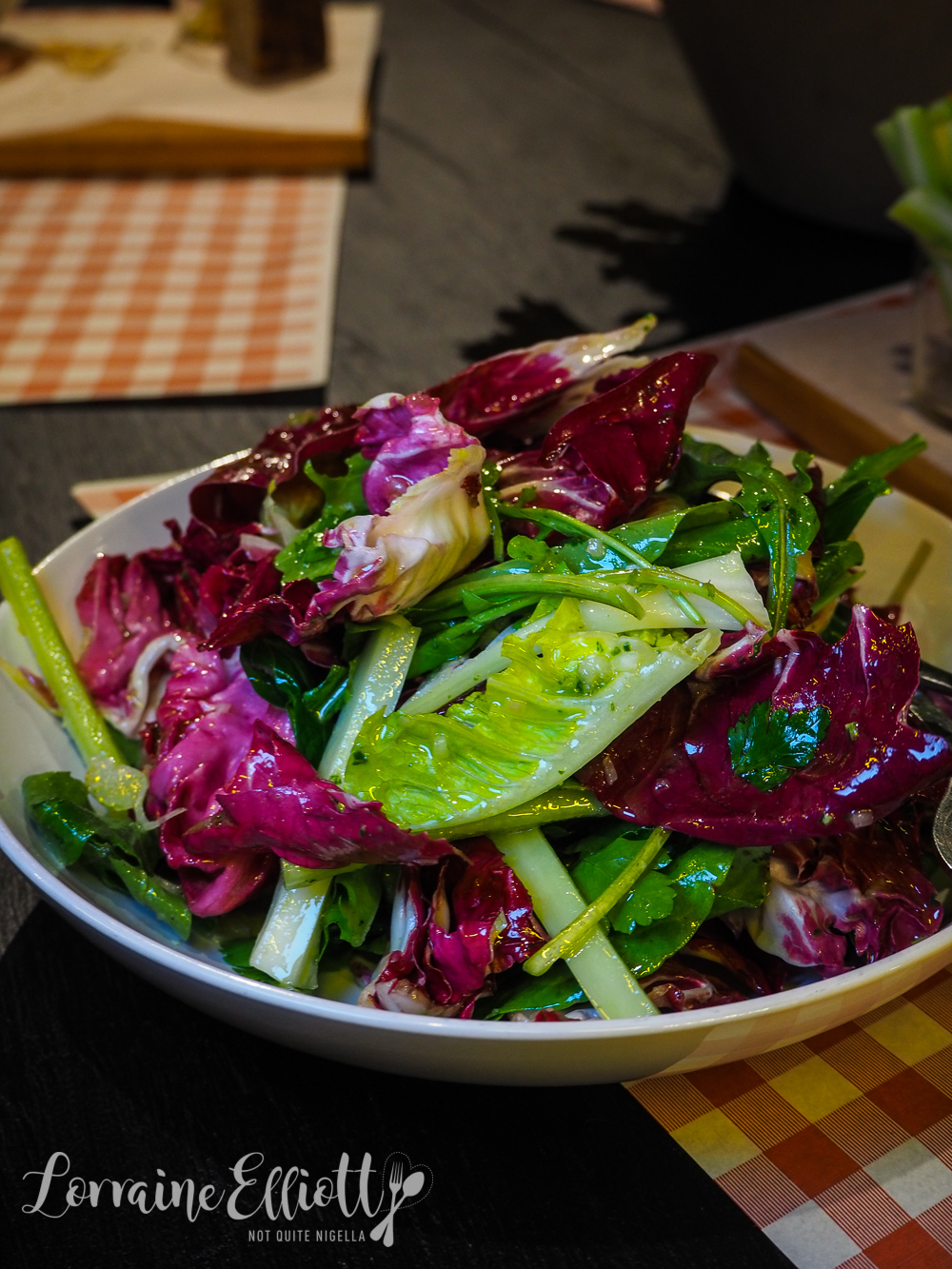 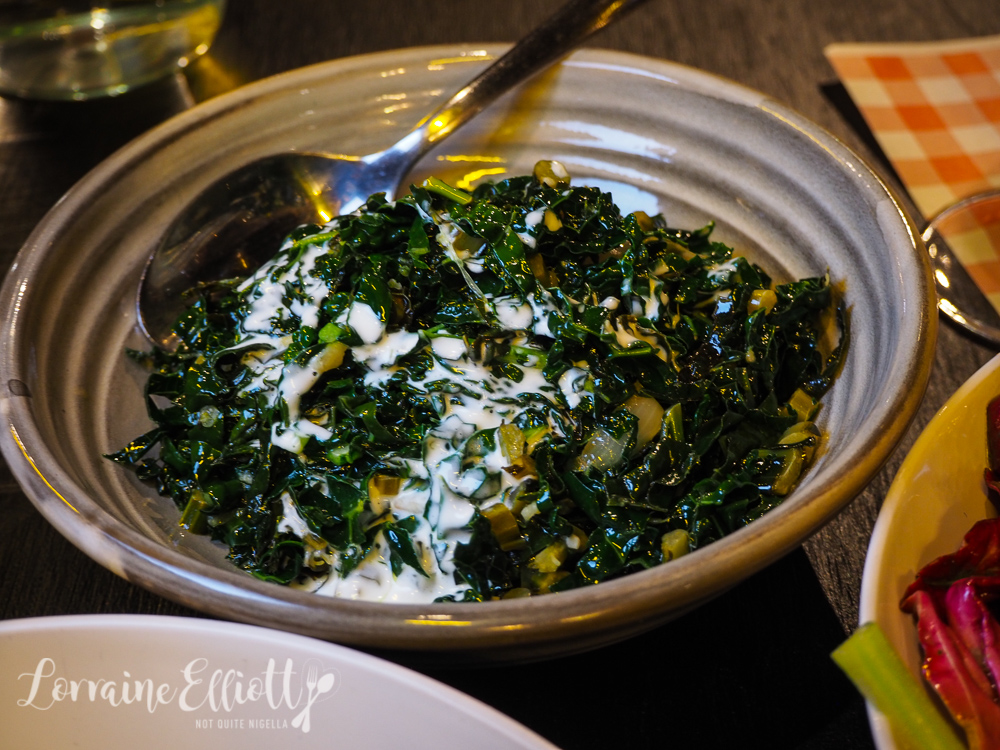 The garlic potatoes are wonderfully crispy and the salad is fresh with crunch. One of my favourite sides is the cavolo nero with celery and Willowbrae goat's cheese dressing. It's so good I go back for third serves. 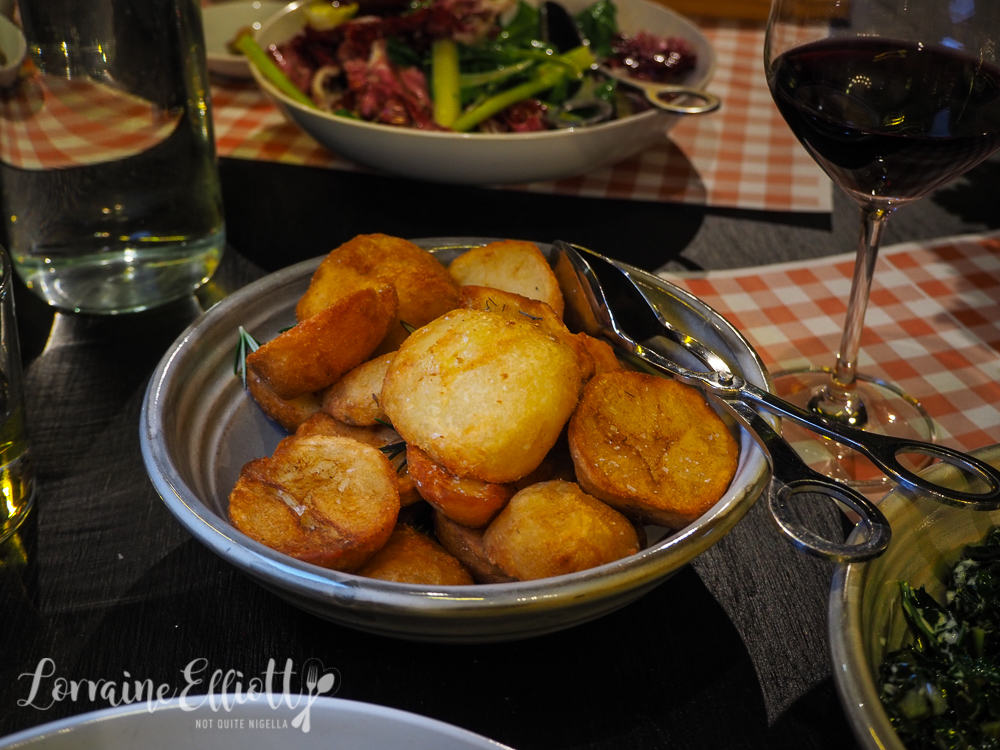 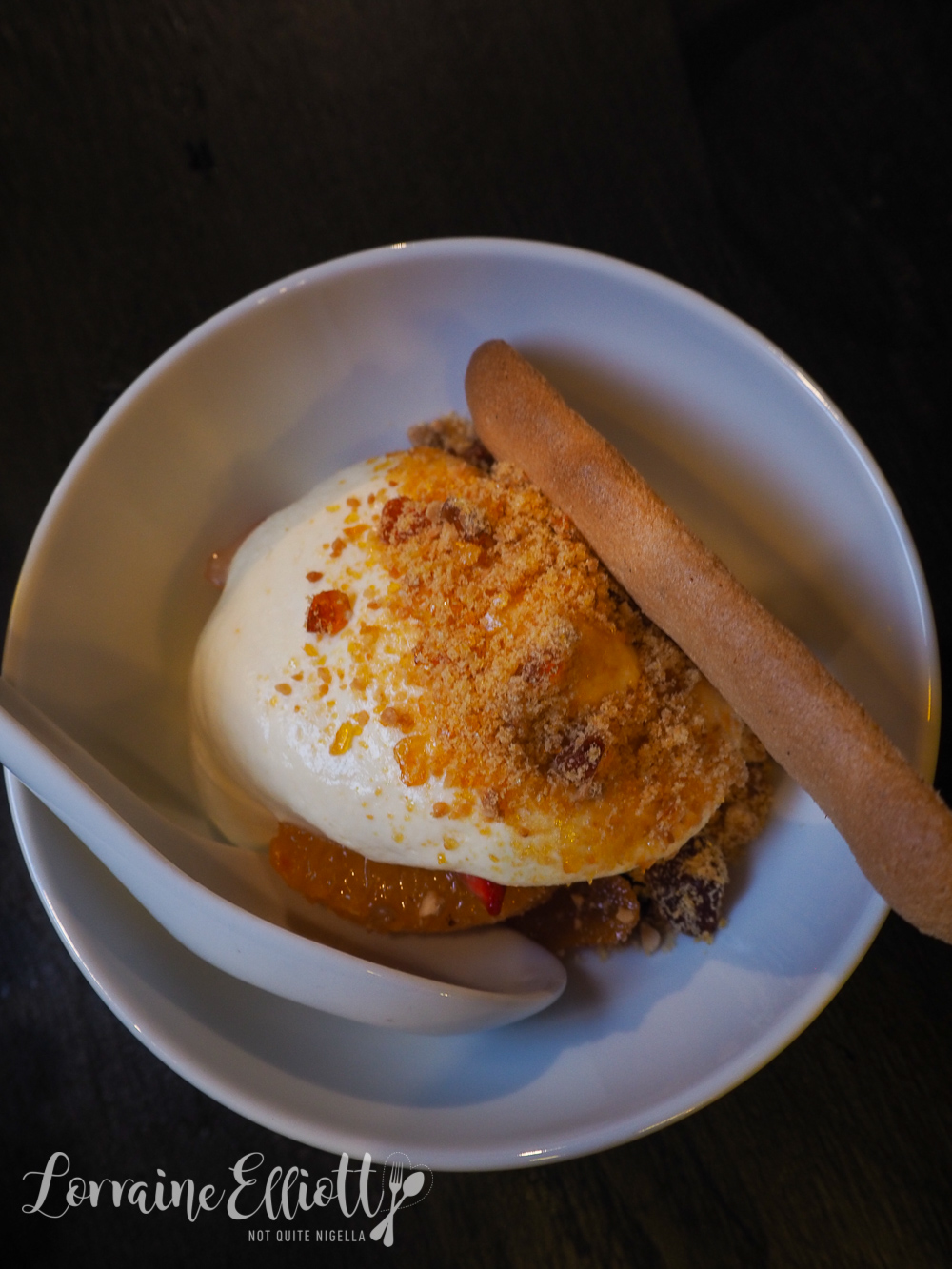 Dessert is fresh strawberries, candied cumquats and oranges with a whipped mascarpone topping with praline shards on top and a biscuit. By now it's 4pm and nobody shows any sign of leaving. 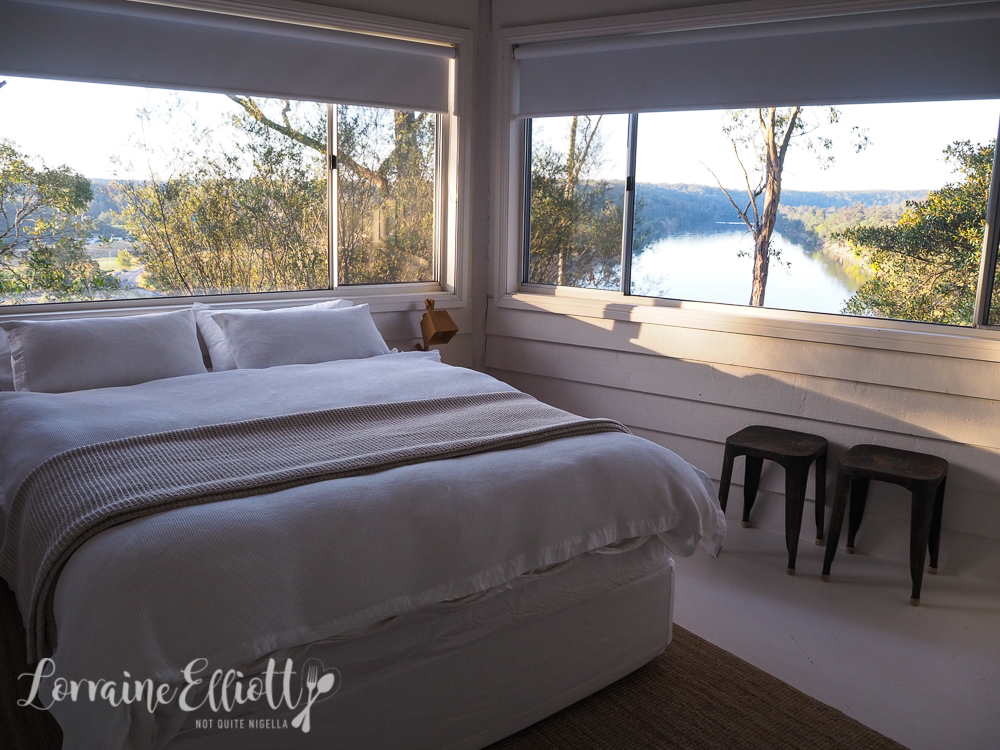 Five minute's drive away is the Cook's Co-op cottage, a free standing self contained cottage set high above the Hawkesbury River with views of fruit orchards and farms below. We watch the ferry make the short crossing back and forth taking cars and motorcycles across the Hawkesbury River. The view is hypnotic and the only sound is of the ferry and birds chirping. The sun sets, turning the sky a pale peach and we go back in. The double yurt designed house has the bedroom at one end and the lounge room in another with a kitchen and bathroom in the centre. 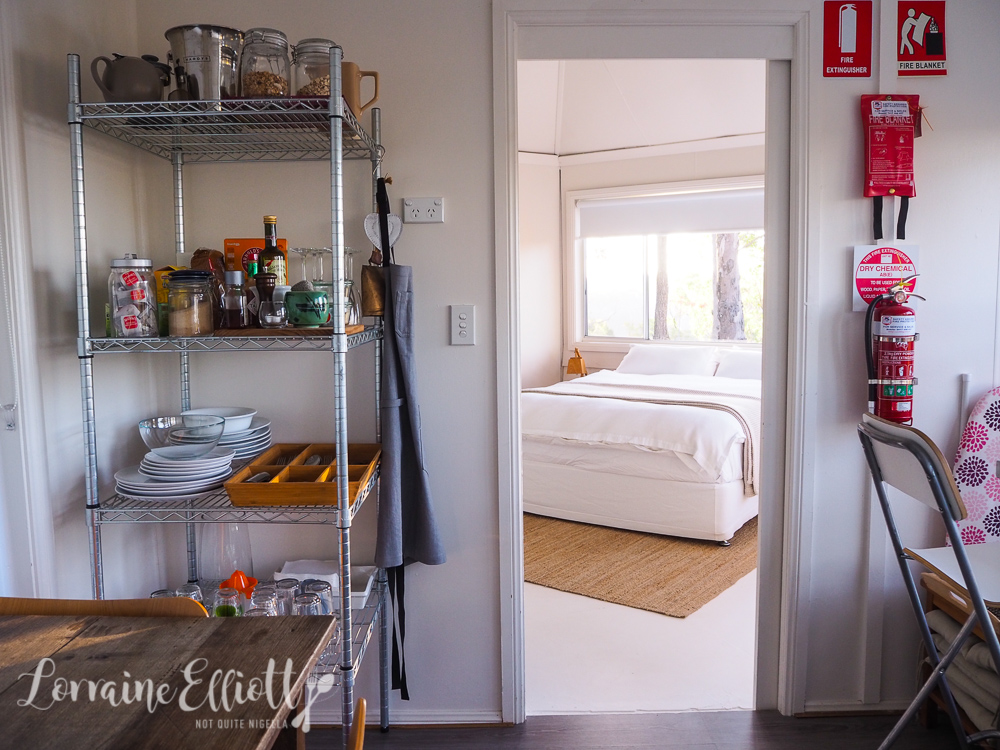 It's a well appointed, simple cottage with plenty of kitchen and cooking supplies, as you would expect. A fridge holds eggs, a slab of butter, fig jam, orange juices, mineral water and Martin has furnished us with a loaf of Bowen Mountain bread. 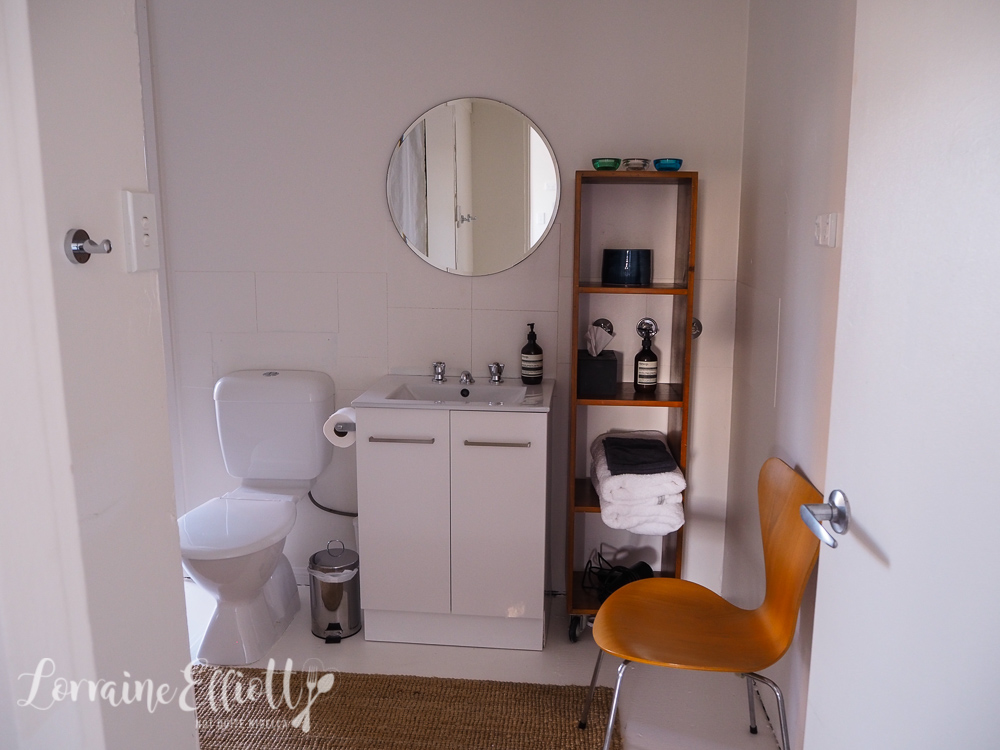 The bedroom has a double bed and good pillows and there is a fireplace in the corner. We switch on the side lamps and read - there's no wifi so whiling the time away lazily is the best option. And watch out for the five guinea fowl that patrol the property looking for food. "Don't worry about them," quips Martin, "They're desperate for friends." 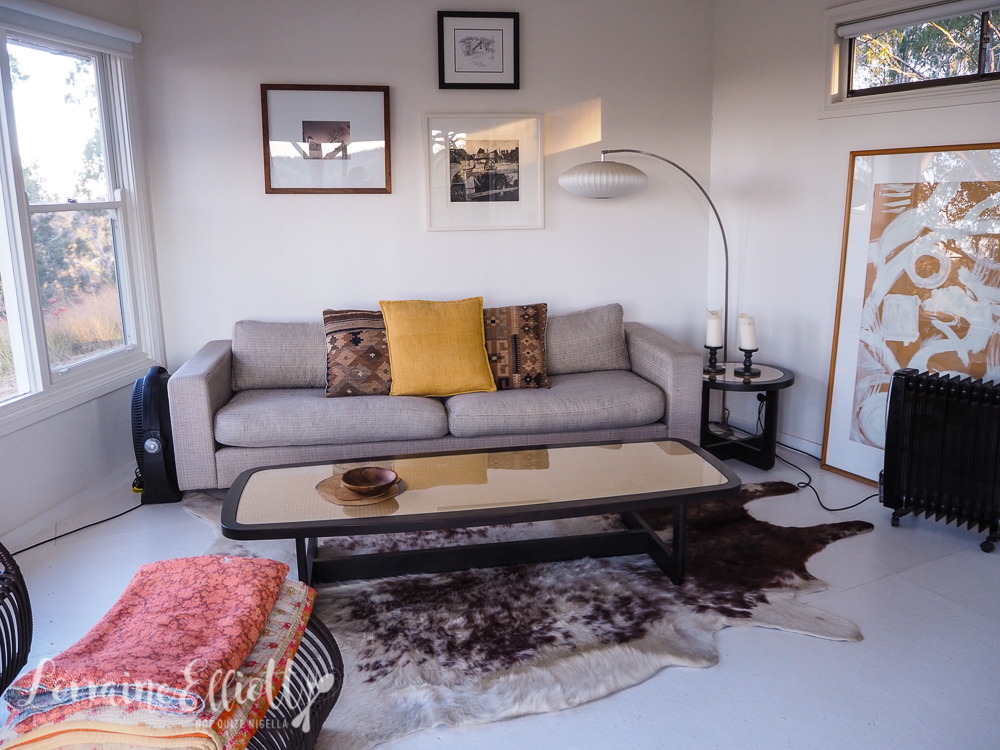 The next morning I wake up at 7am and pull up the blinds. The river is shrouded in a heavy cloak of fog. I make a cup of tea and pull up a chair to the bench and sip it while wearing my robe. The temperature reads 2 degrees but the morning sun soon warms up the house. We are headed out to meet Martin's friends and suppliers who have embraced the chef as soon as he arrived in the Hawkesbury. 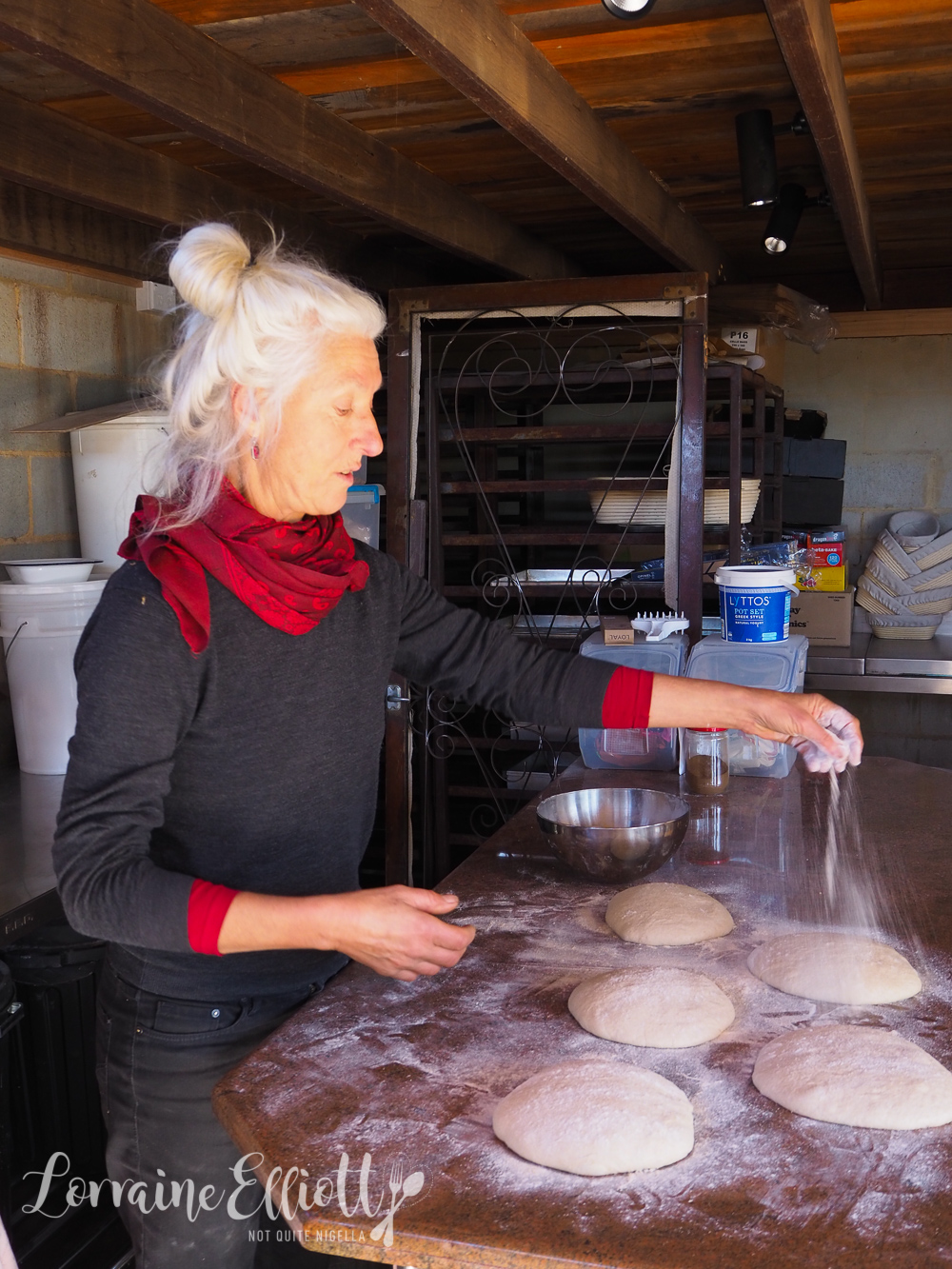 Our first stop is at Bowen Mountain Bread where baker Lynne Trappel is excited about her new premises built on the back of their mud brick home. She and her husband Ray are architects by trade that specialise in mud brick homes. On Thursdays she has an open house so that people can buy her bread and she also sells at the market and supplies to restaurants. She uses a mix of white and wholemeal flour because wholemeal "tastes great." She shows us the flour sourced from Gunnedah so finely milled that you can barely see the wholemeal grains. 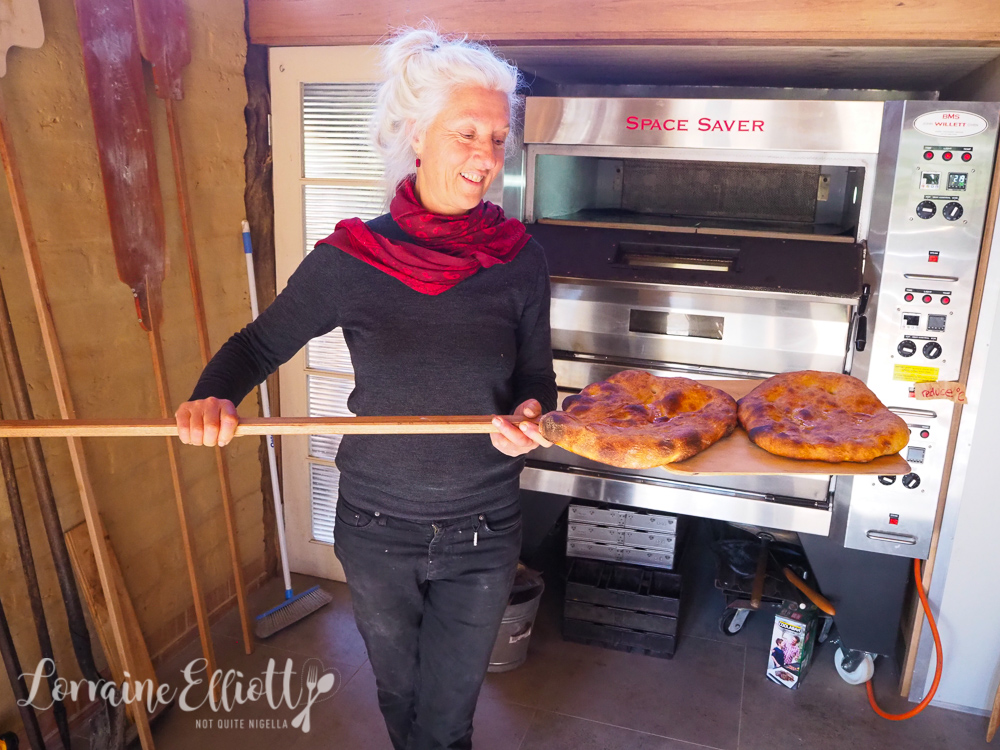 She specialises in a high hydration dough with a long fermentation process to make it easier to digest and stays fresh longer. One of her special loaves is a porridge bread made with porridge oats soaked overnight and fermented. This undergoes a double fermentation and after 12-16 hours fermenting the oats has practically dissolved. Also her fruit bread is abundant in figs, fennel and currants and all ingredients are organic. Her base is a 12 year old mother and her style of sourdough is based on the proportions of Tartine's Chad Robertson.

Lynne has been baking all her life but started Bowen Mountain Bread three years ago. "The kids left home and there was nobody to eat my bread!" she jokes. And why the switch from architecture to bread? "Bread is basic to language around the world," Lynne says. 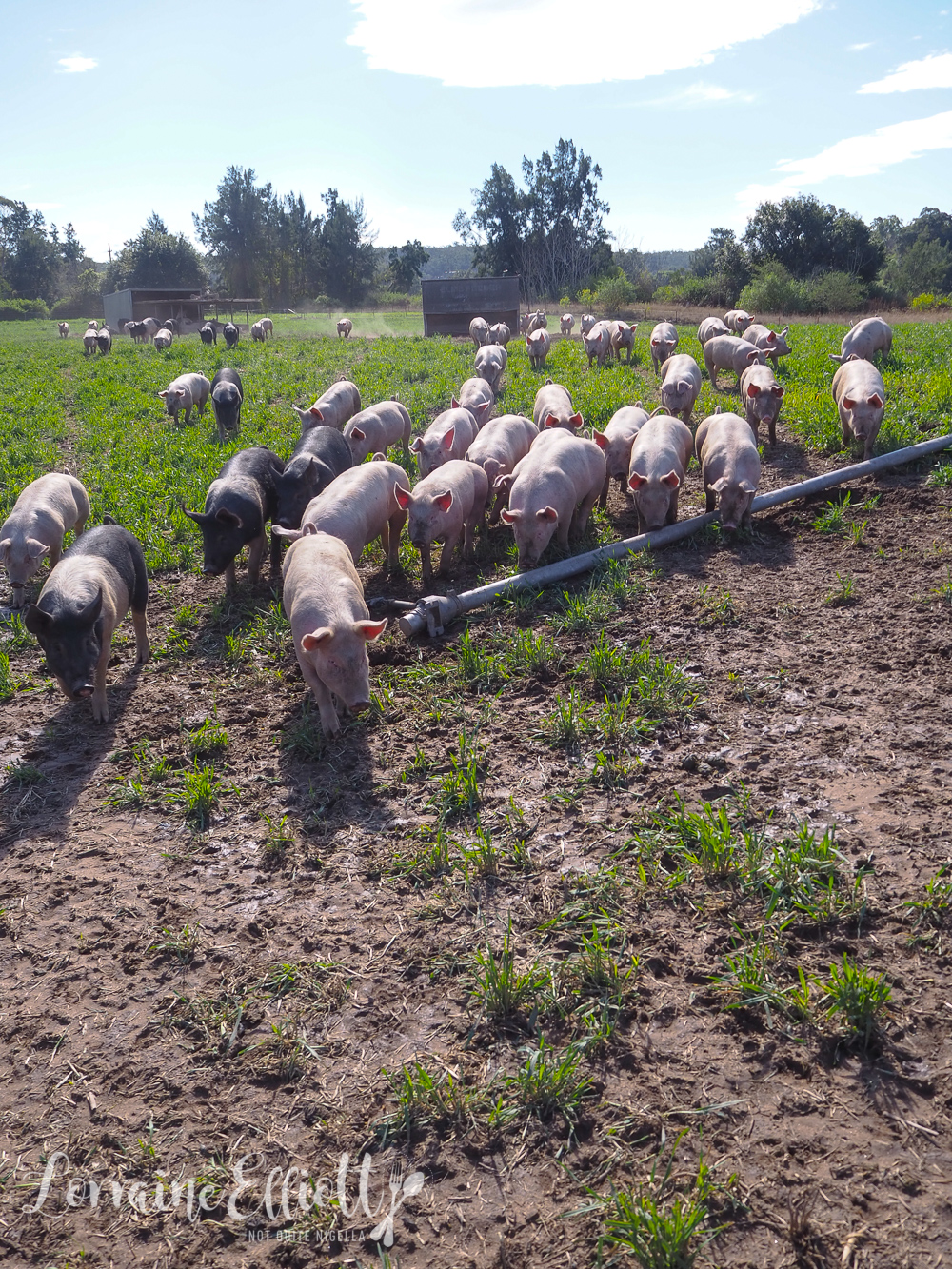 Our next stop is Malanda Park pork where Sue and Matt Simmons raise free range pigs along with a menagerie or animals including several dogs, two brand new maremma pups, horses and a pet grey kangaroo that loves arrowroot and Sao biscuits. Their farming property is part of Sue's family (her parents live next door) and used to farm citrus and then potatoes. Pigs are a relatively new addition and they have pigs on this property as well as one in the Hunter Valley. 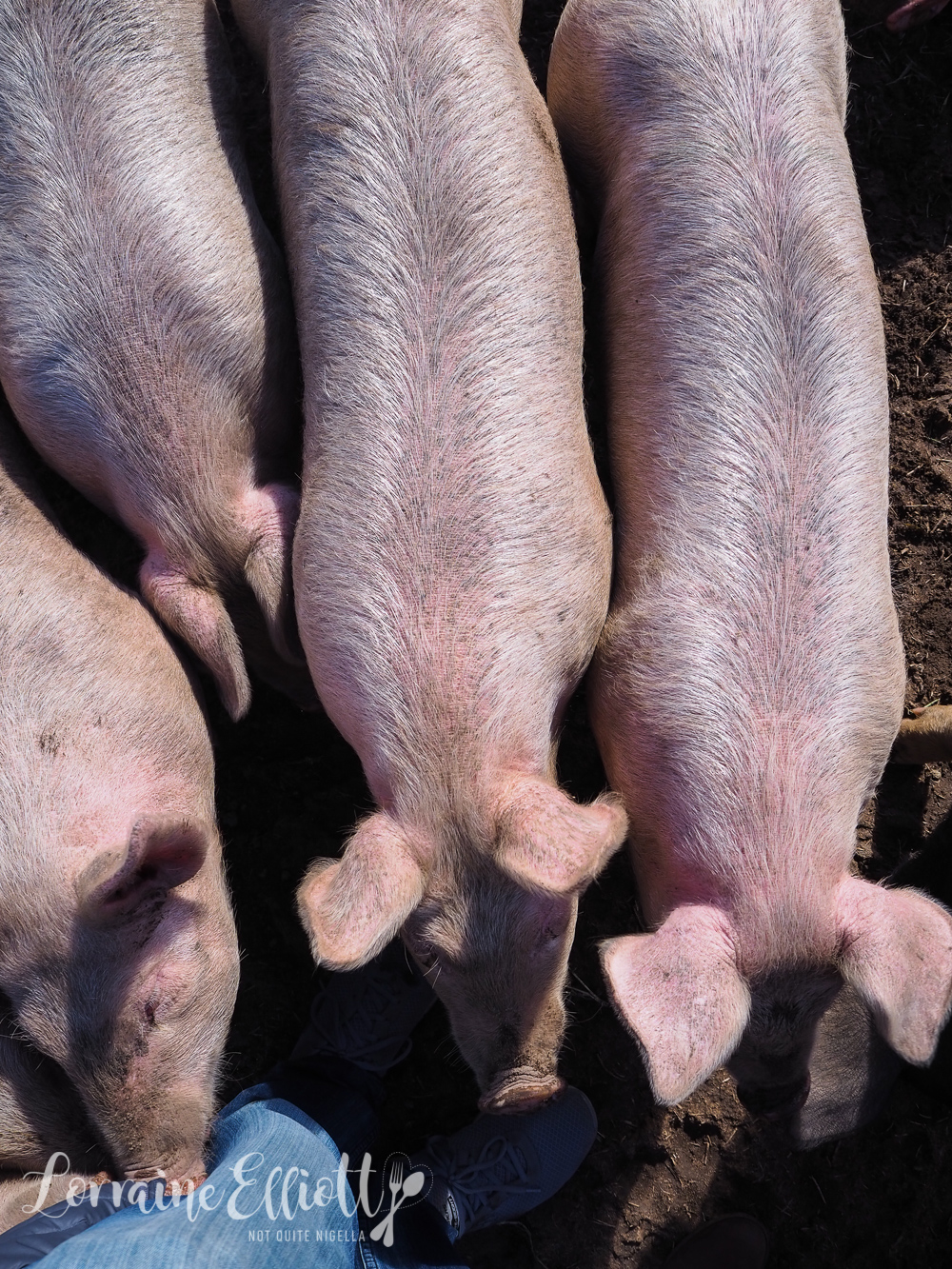 The pig they specialise in are a cross breed between a white pig crossed with a Hampshire and Duroc pig. This is a cross between the heritage rare breeds that tend to be fattier and leaner pigs and sits somewhere in between these two. "Being outside they do burn more fat," says Matt. They rotate four lots of pigs at the property that are born 3 weeks apart. Pigs are reared for 18 weeks before they are taken to the abattoir. The amount of space that the pigs have is impressive and they can really roam free. 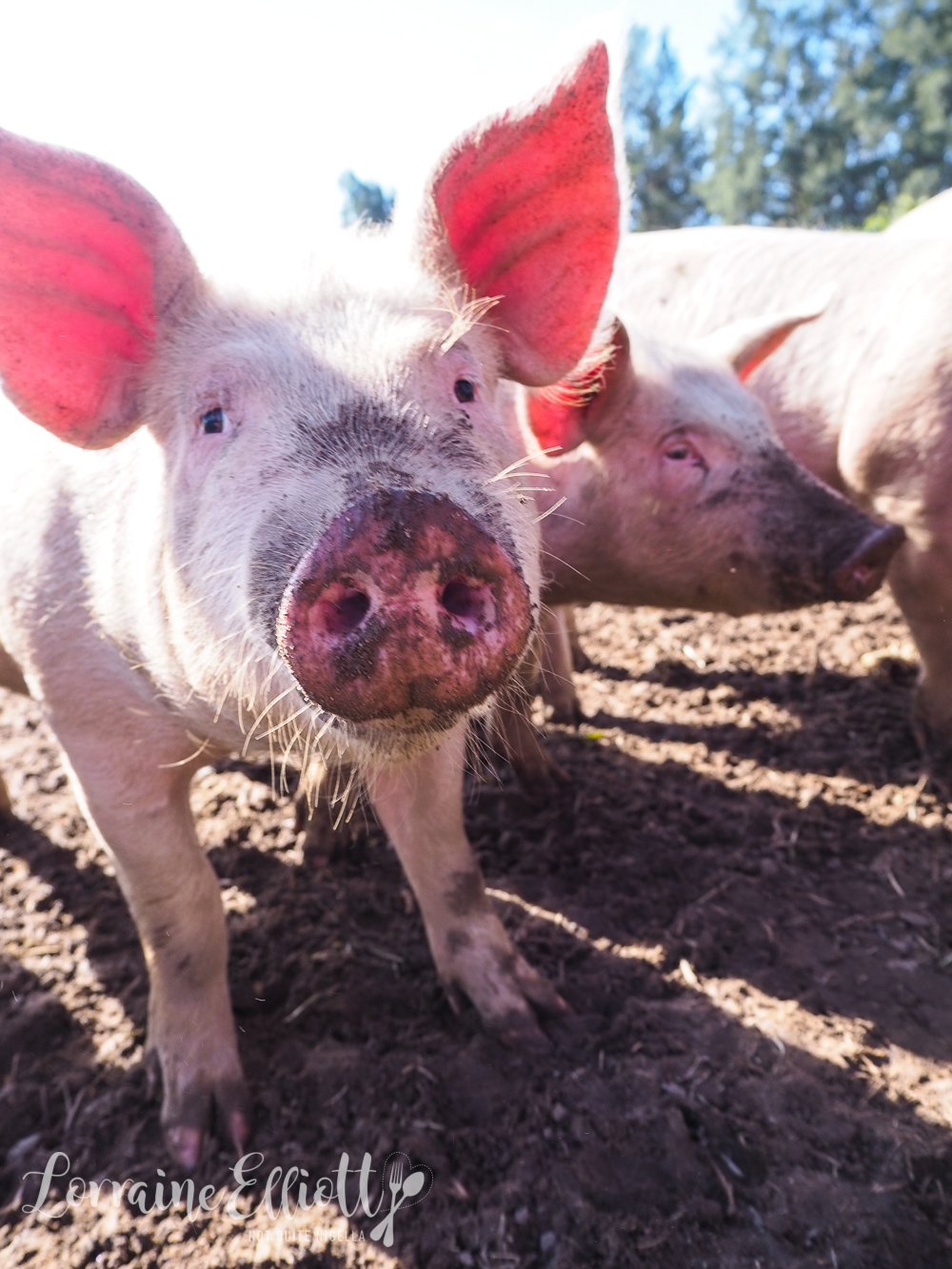 Our last stop is at Willowbrae chevre cheese where Karen Borg and her husband create one of Martin's favourite products, their Willowbrae goat's cheese. They started 20 years ago with flavoured cheeses to help the general public over the line with goat's cheese. Willowbrae cheeses are ideal for those that don't really like a strong goaty aroma in their cheese. 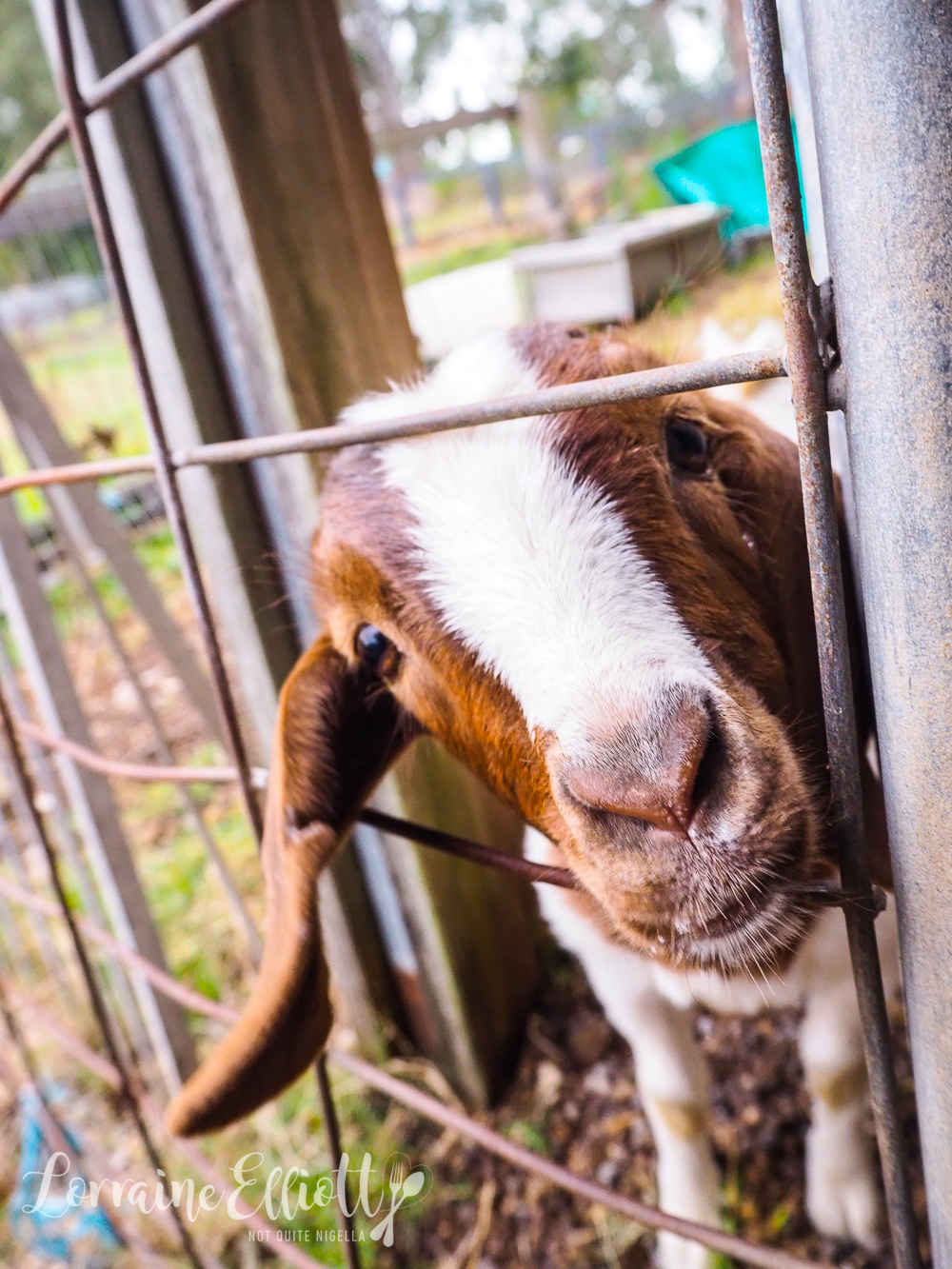 Karen puts this down to having control over the milk and what the goats get fed. Goats require a high mineral diet and when they lay the mineral feed out her boer cross goats know when and what they need and will naturally seek it out as they are attuned to their body's needs. 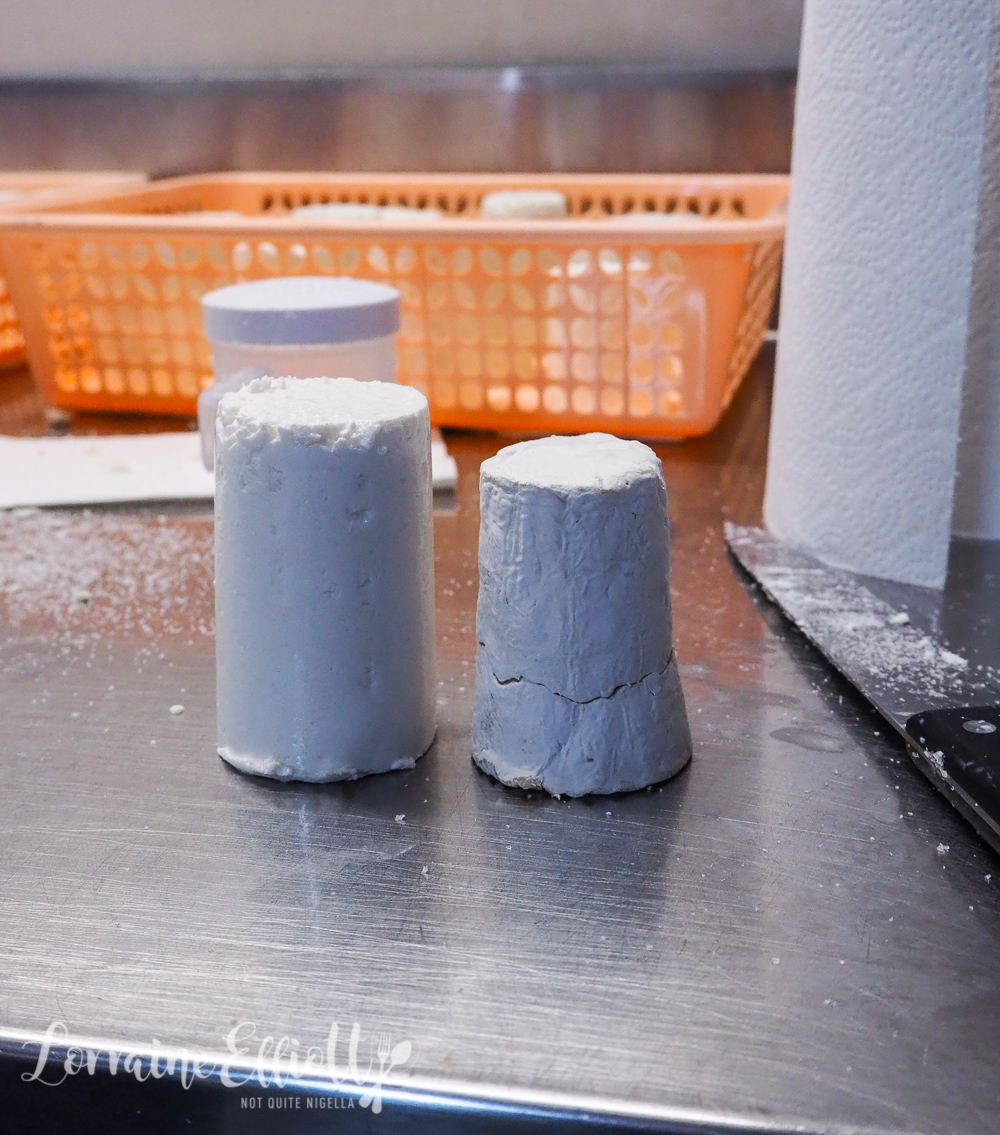 Karen is salting the cheese and this will age and shrink further. As it ages it will become thick and drier and start to approach a pecorino or parmesan style cheese in its intensity and savouryness. To make 84 of these cheeses requires 110 litres of goat's milk. 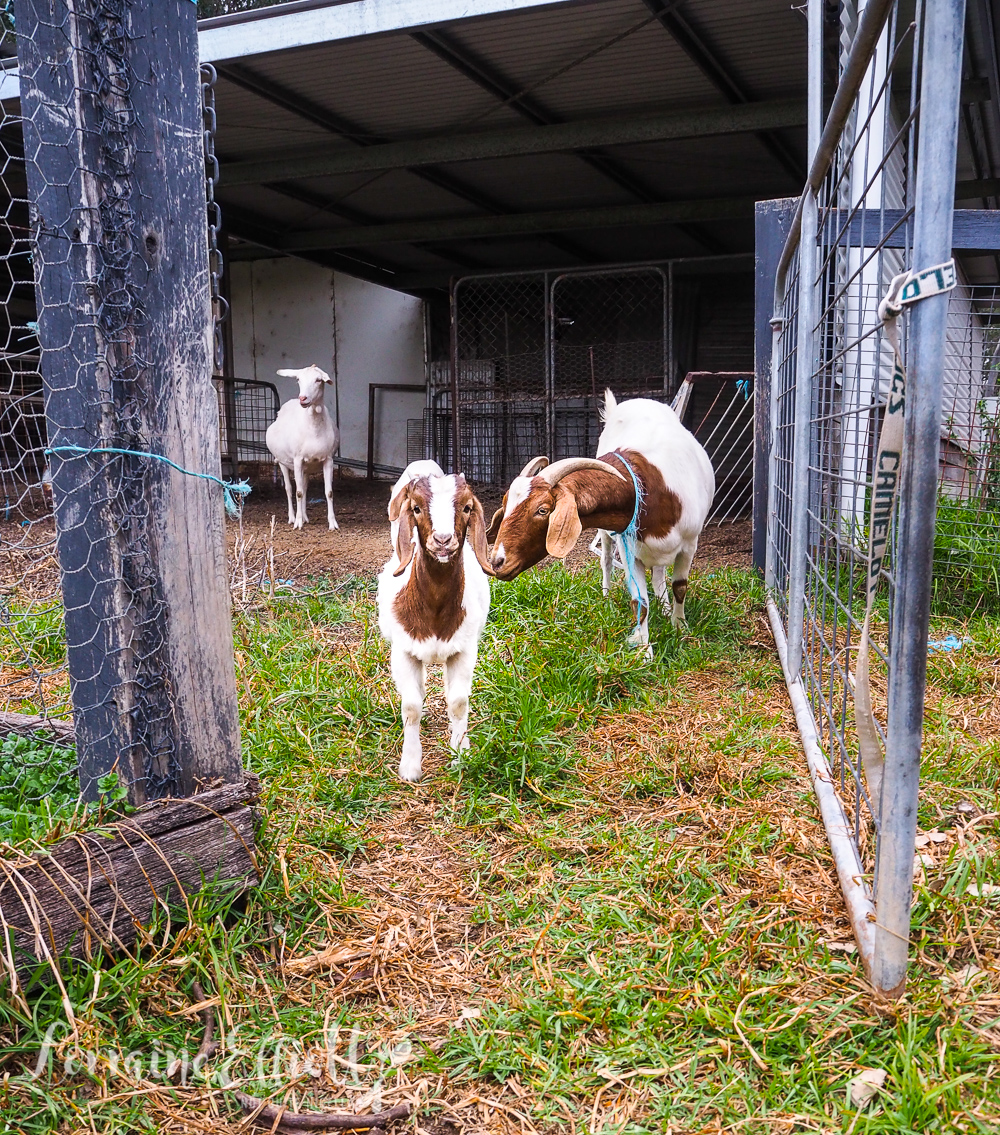 Since then they've been dealing with the public at markets such as Eveleigh and their customers are not shy about their fanship of products. One newer item is a goat halloumi that takes Karen a whole day to produce but now has so many fans she has to make it. The result is said to be a sweeter product than sheep's milk halloumi and one that can be eaten unfried although Martin exhalts the goat's halloumi pan fried and drizzled with honey. "I eat cheese all day every day and I still go out and eat cheese," says Karen.

So tell me Dear Reader, do you take notice of where things are grown or produced? Do you ever want to completely change where you live and have you ever done it?

NQN and Mr NQN visited the Hawkesbury as guests of Destination NSW but all opinions remain her own.