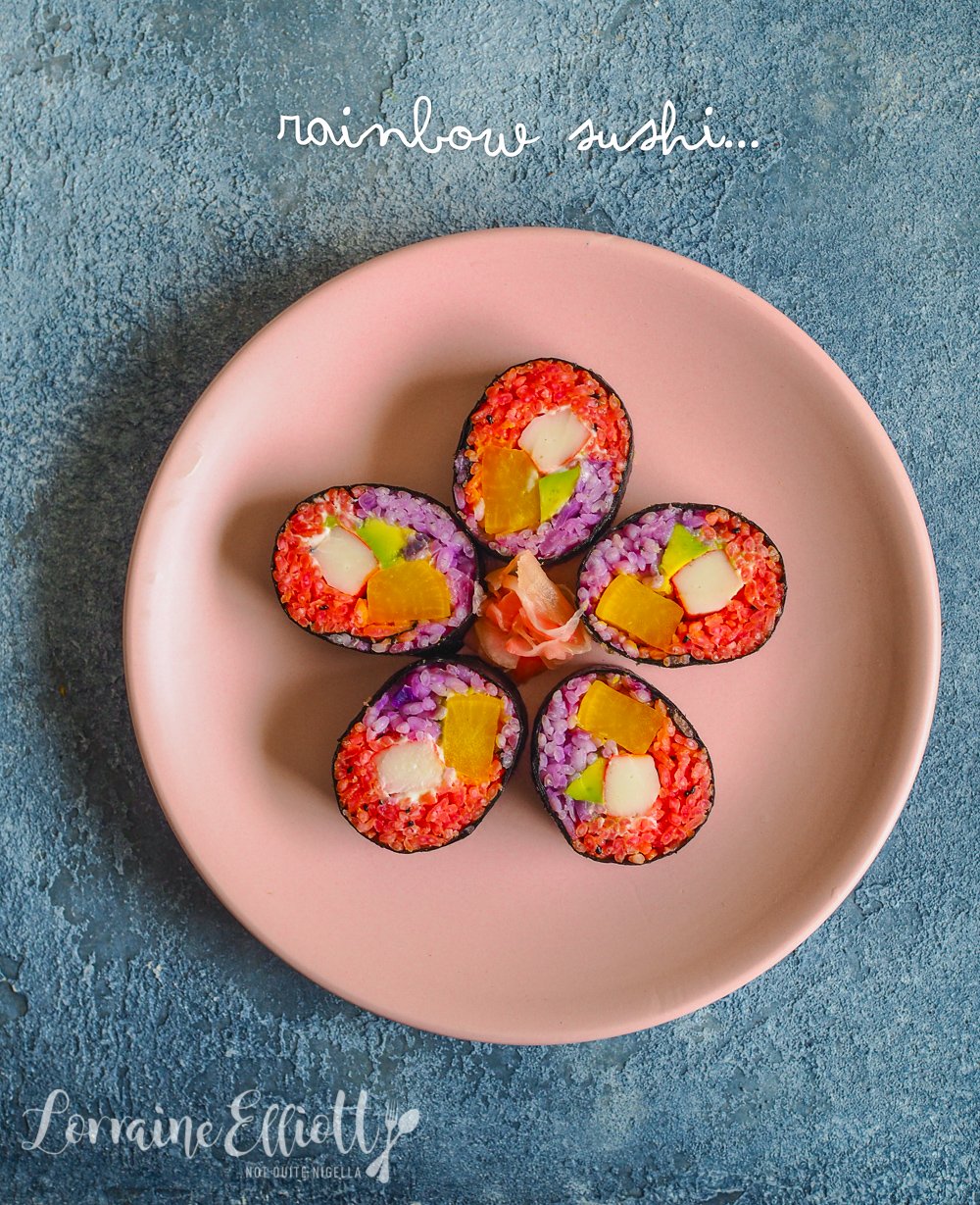 This rainbow sushi will make you smile! Best of all this colourful rainbow rice is naturally coloured and there's also a vegan sushi version too!

I have found that using food to naturally colour anything is a bit of a surprise. And this rainbow sushi came about in a roundabout way. I was aiming for purple sushi rice. And in my infinite wisdom (sarcasm) I thought that red dragon fruit would give the sushi a deep magenta shade because that's the colour of the juice. 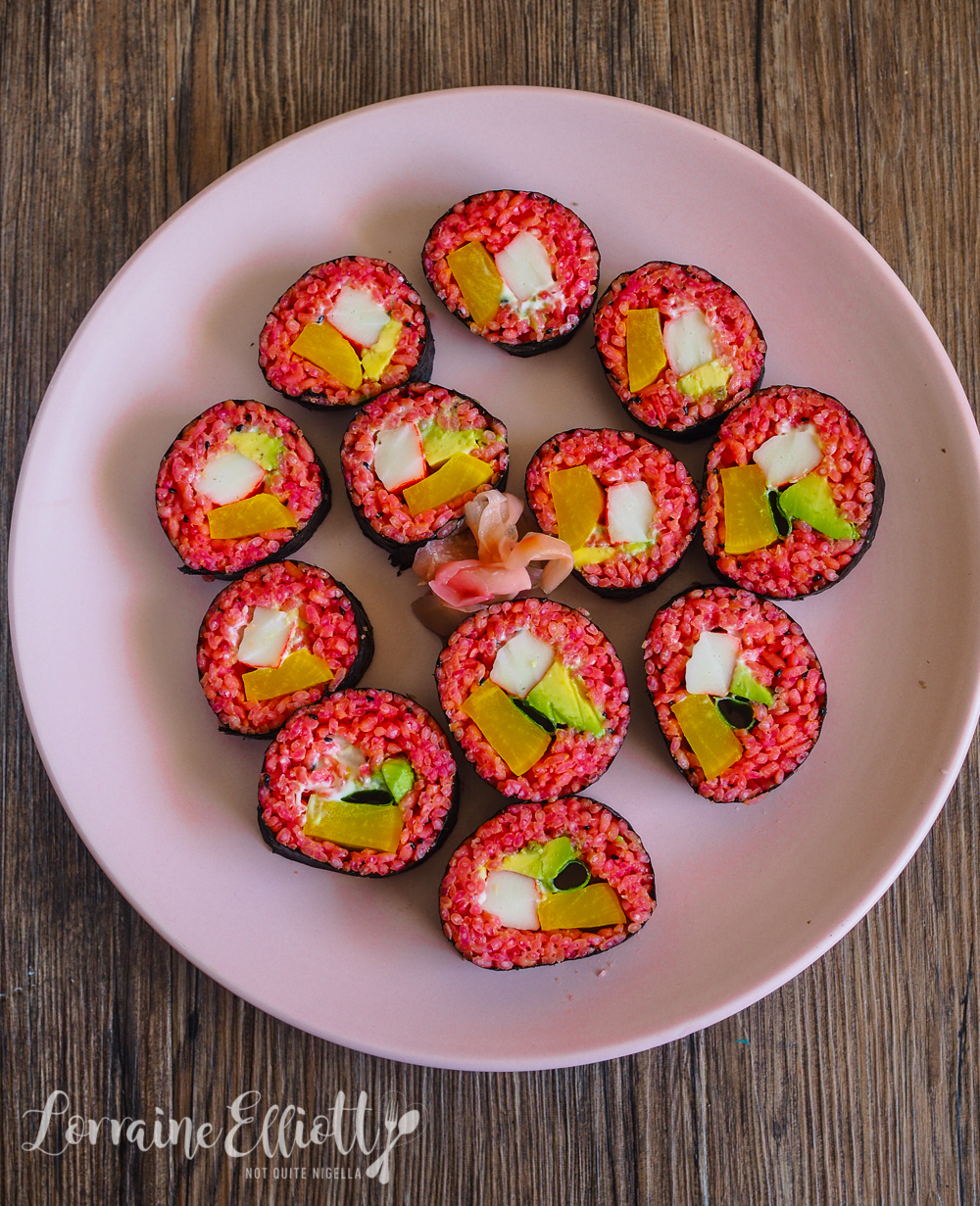 Well Dear Reader, red dragonfruit doesn't give rice a purple colour. It gives it an orangey red shade as I discovered (see above). I then tried shredded purple cabbage and voila, I had purple sushi rice! Yes you can buy purple rice but it isn't sticky textured so isn't ideal for sushi making unless you're skilled at that sort of thing. And that I am not.

I made many sushi rolls, some with the orange rice, some purple but my favourite was one combining the orange and purple to make a pretty duo coloured sushi. I also made one vegan version. 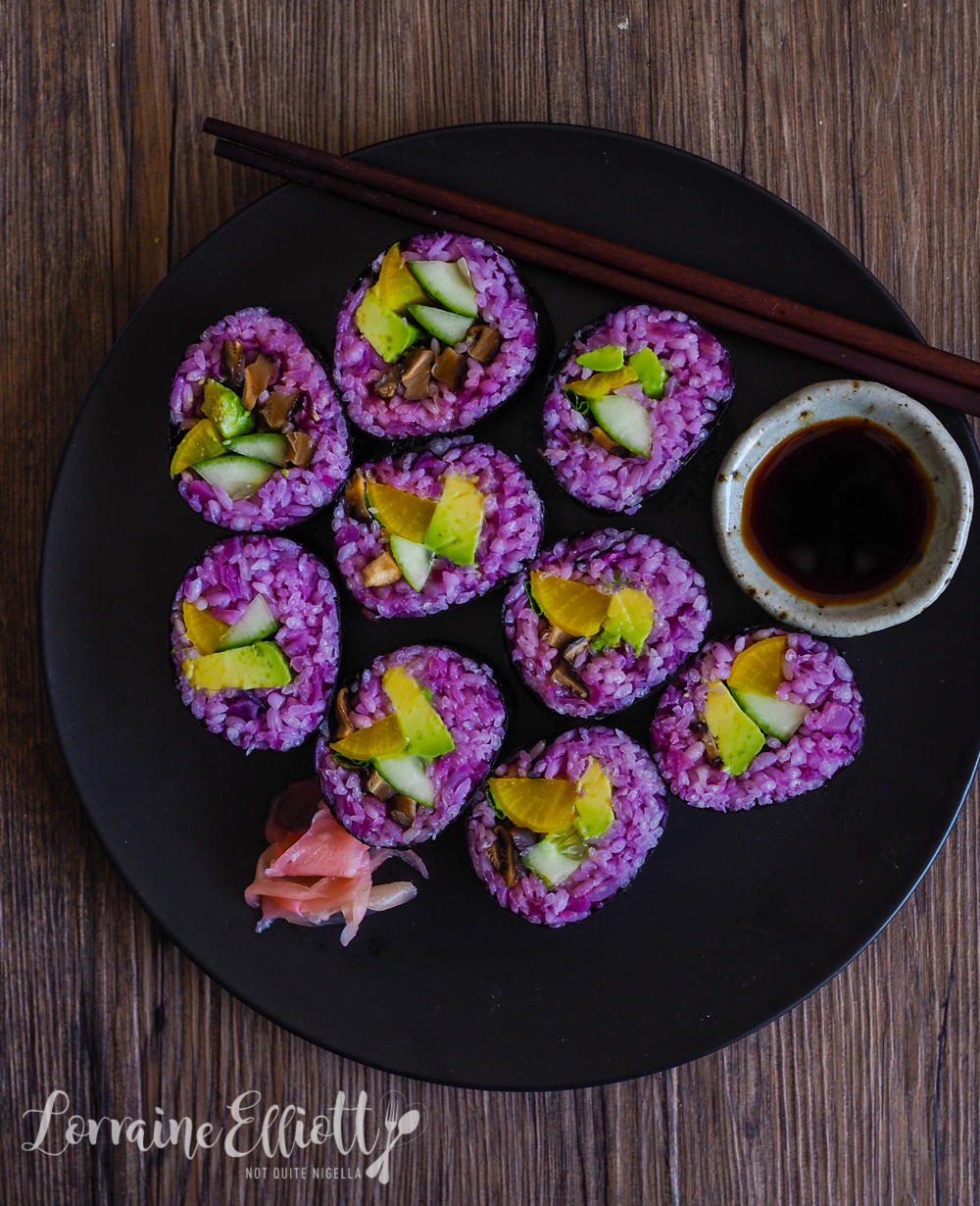 The reason why I wanted to make purple sushi rice was because I was making something for my mother in law Tuulikki's birthday. She is the queen of all things purple - her house is decked out in purple and so is she. And the Elliotts love picnics for many reasons. For starters there are children involved and they tend to get distracted in a restaurant and the Elliotts are vegans and eat quite specifically so a bring your own plate seems to work instead of having to deal with it in a restaurant setting where there's inevitably a kerfuffle (they love a kerfuffle).

"I wonder what will happen today?" I asked Mr NQN as we were driving to the picnic in the car. An Elliott event is never without incident and usually they involve his father Roger because Roger loves attention and is a little on the unique side. But he wasn't going to be there because he now lives in Phuket, Thailand. But Roger left his mark as he always does. His former wife Tuulikki revealed that 70 year old Roger may be getting married again. His new wife is a 23 year old physiotherapist. 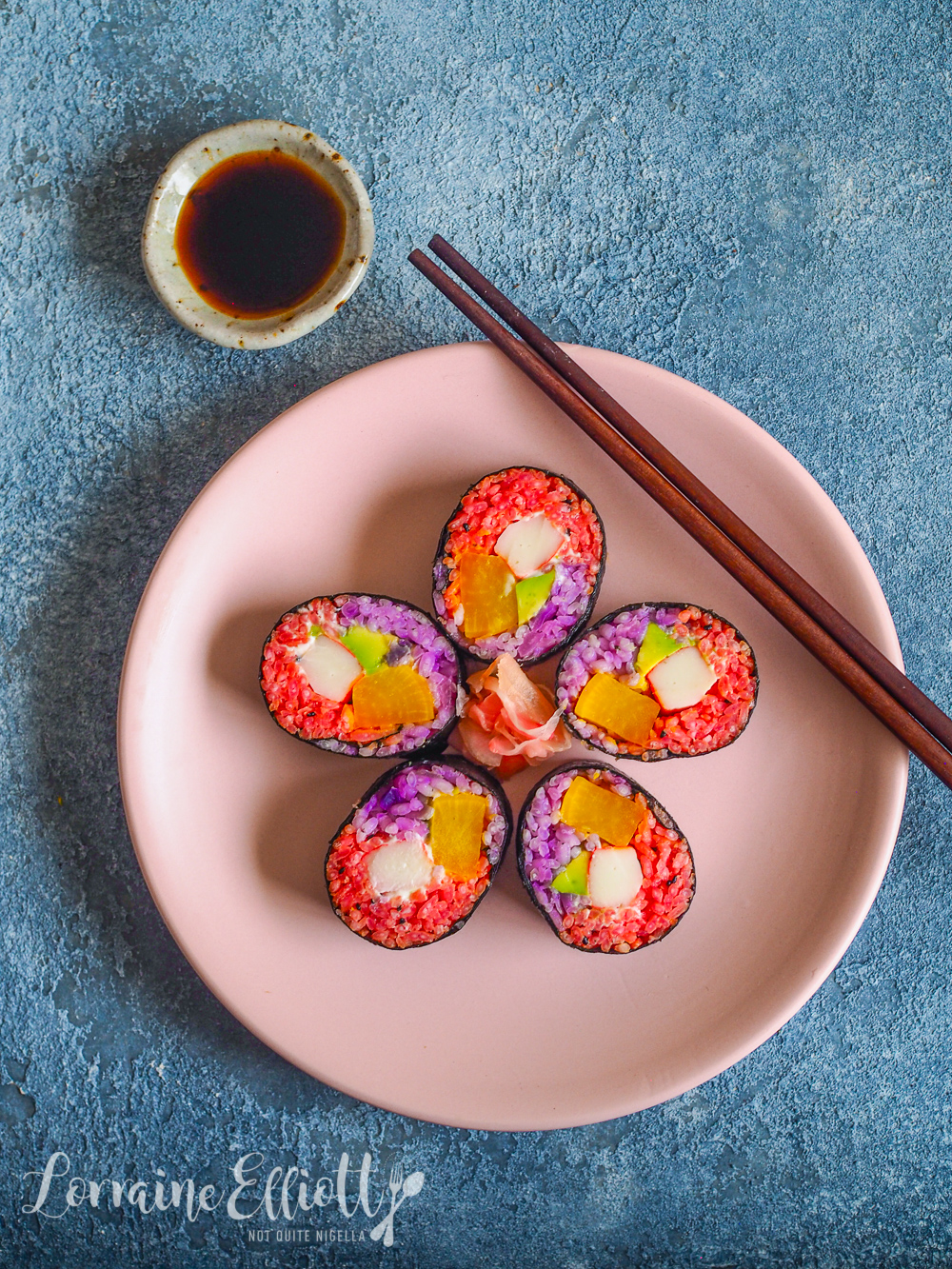 Everyone was worried about Roger and remarked at how he was so desperate to get married again. Others were unimpressed by the age gap as his new wife is younger than all of his children. And I think while the divorce was unpleasant, the best birthday gift Tuulikki had was not being part of this three quarter life crisis!

So tell me Dear Reader, do you ever make sushi at home? What is your favourite sushi filling? Have you ever naturally coloured your food? 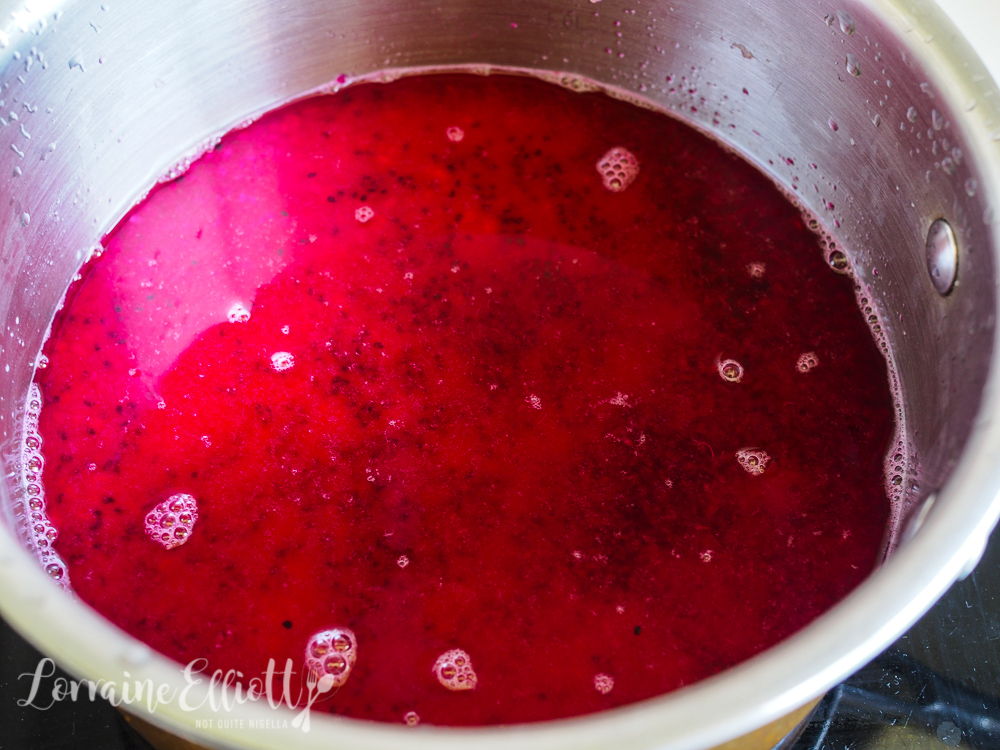 Step 1 - Cook each rice colour separately. Rinse the rice until the water becomes clear and then add the purple cabbage or dragonfruit and water and steam on the stovetop or in the rice cooker until cooked-about 15 minutess. Mix in the sushi seasoning and then spread out to cool. 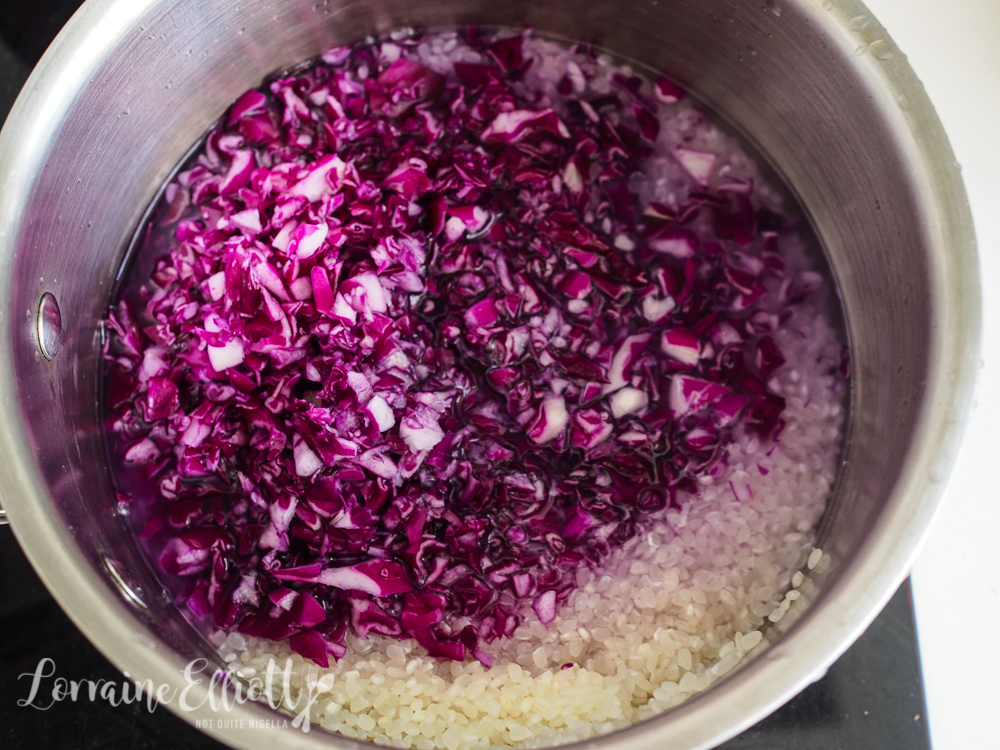 Step 2 - The key to rolling sushi is to have slightly wet hands. I place a small bowl of water handy to dip my fingers in. To make the rainbow sushi spread out some purple rice onto the bottom part of the nori (as shown). Then spread out some orange rice leaving an inch at the top free. Lay out your fillings. I dab the top inch of exposed nori with a little water and then roll up tightly and then slice. 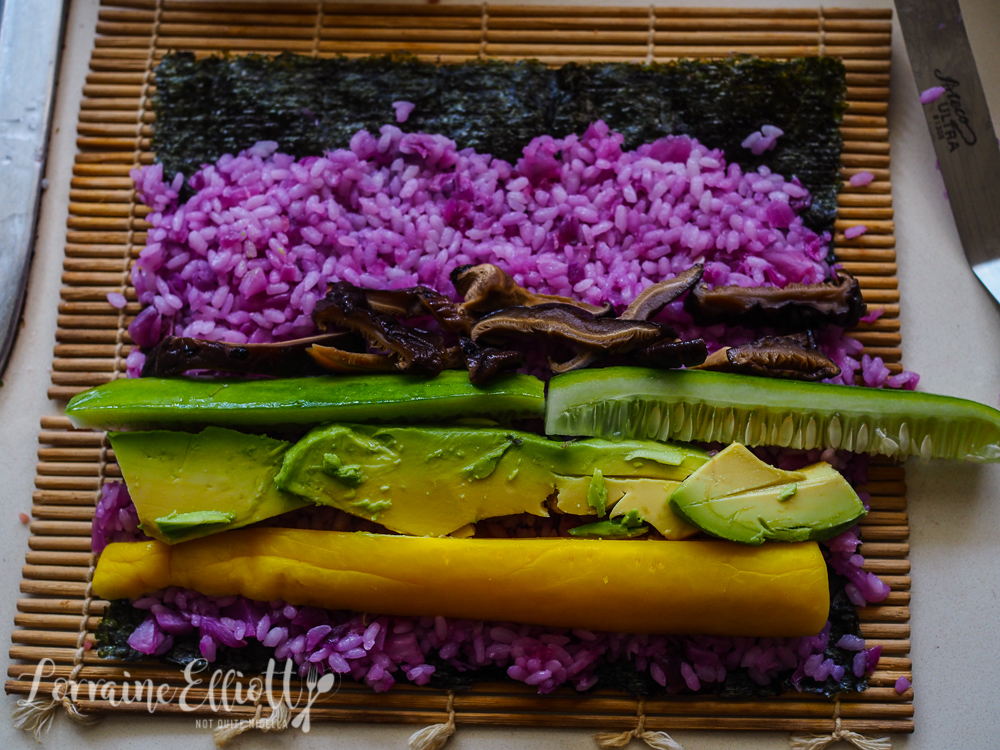 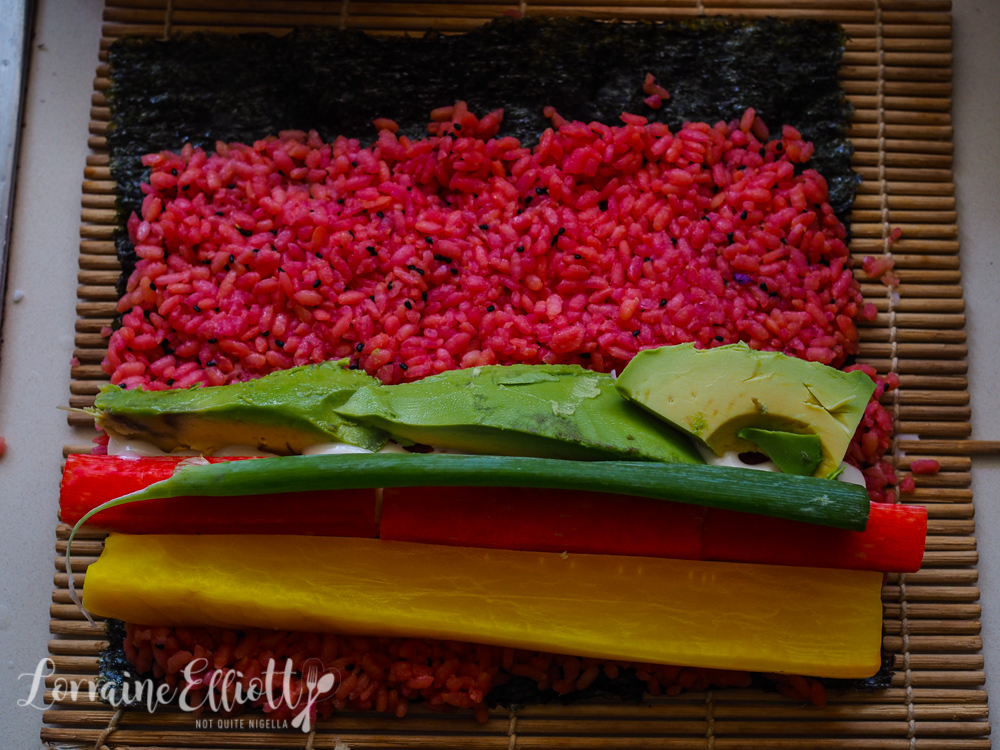 Troubleshooting: I use a sushi rolling mat which helps but isn't strictly needed. But if you're a beginner making sushi it will definitely help. 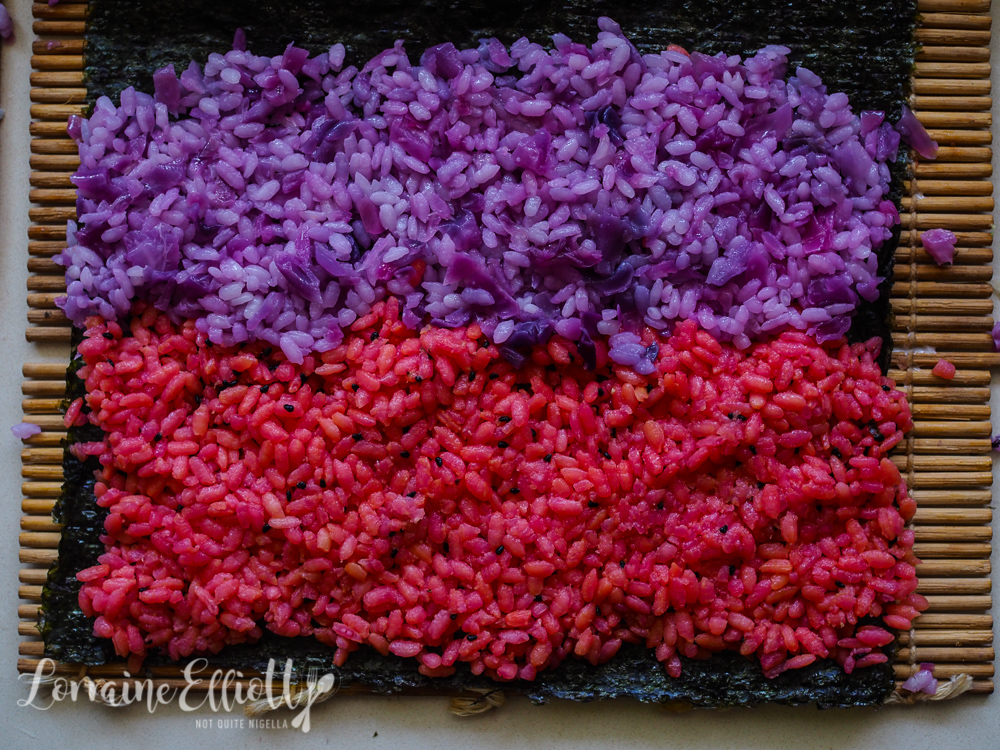 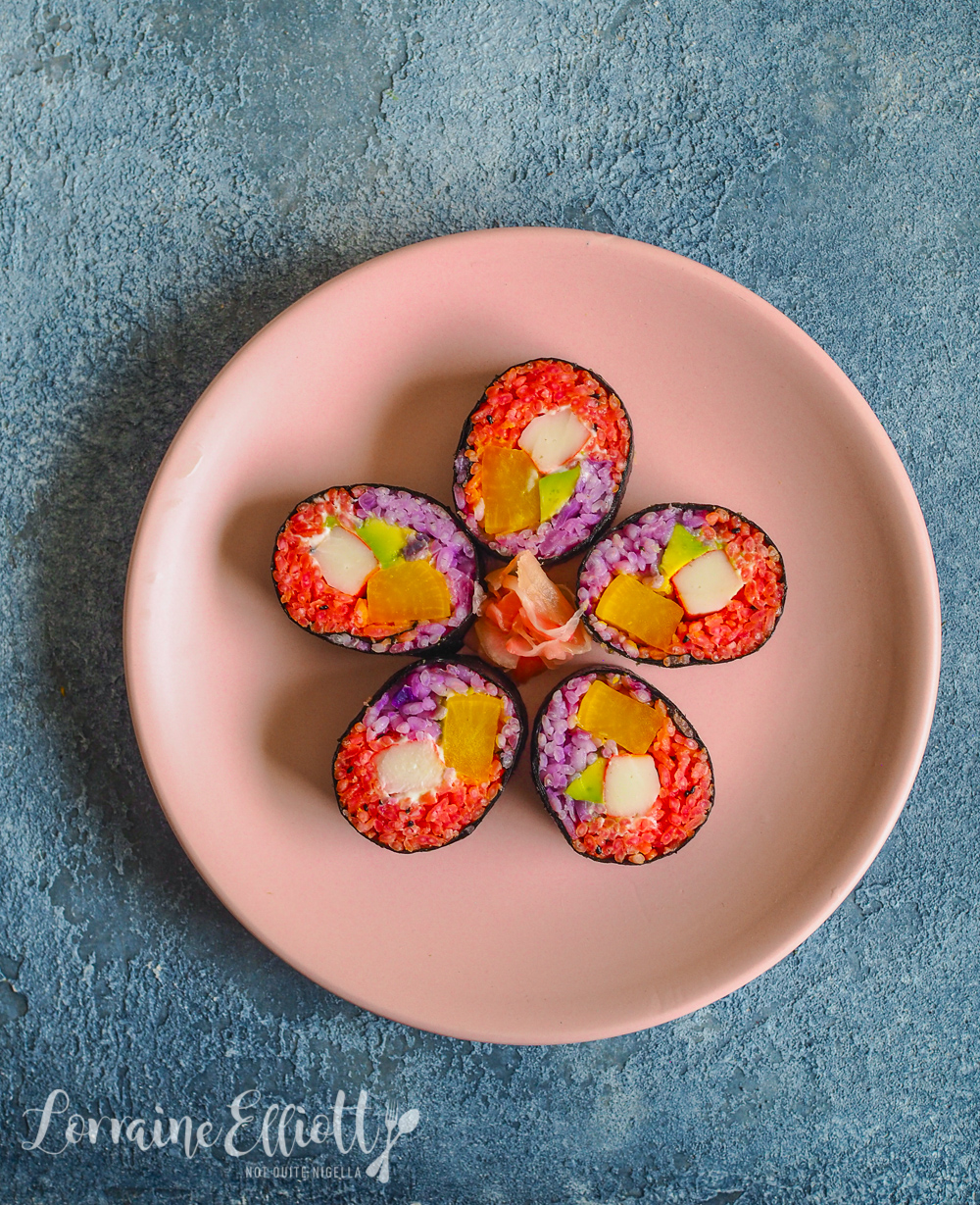 I usually let the rolled up sushi rest so that the nori is always pliable and soft when you cut it.

Squished sushi pieces? Make sure to use a very sharp knife to cut it. Otherwise your sushi can end up misshapen.