Do You Even Lift? Low Carb Eggplant Yaki Udon "Noodles"! 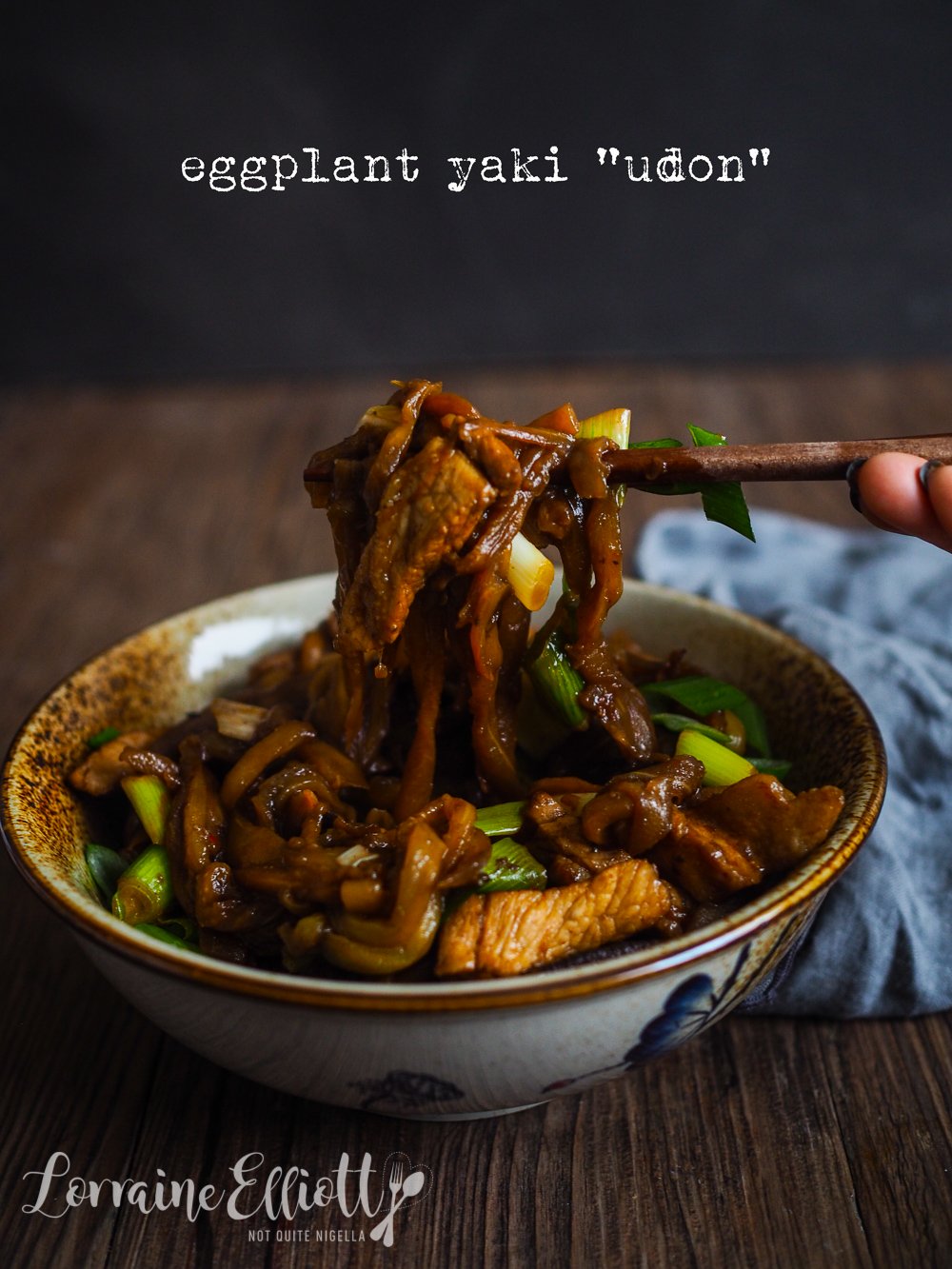 Dear Reader did you know that you can make noodles out of eggplant? These eggplant noodles are a wonderful low carb alternative to wheat noodles. Using just three ingredients you can make these delicious spicy, saucy eggplant noodles! You may just find yourself making these a bit too often (but as it's mostly vegetables, that's perfectly ok!).

I first tried these when I had an extra eggplant and it wasn't enough to do much with. One Friday (when the fridge is really empty) for lunch I cut it up and added some of my favourite chilli condiment and it was so delicious I knew I had to share it with you. 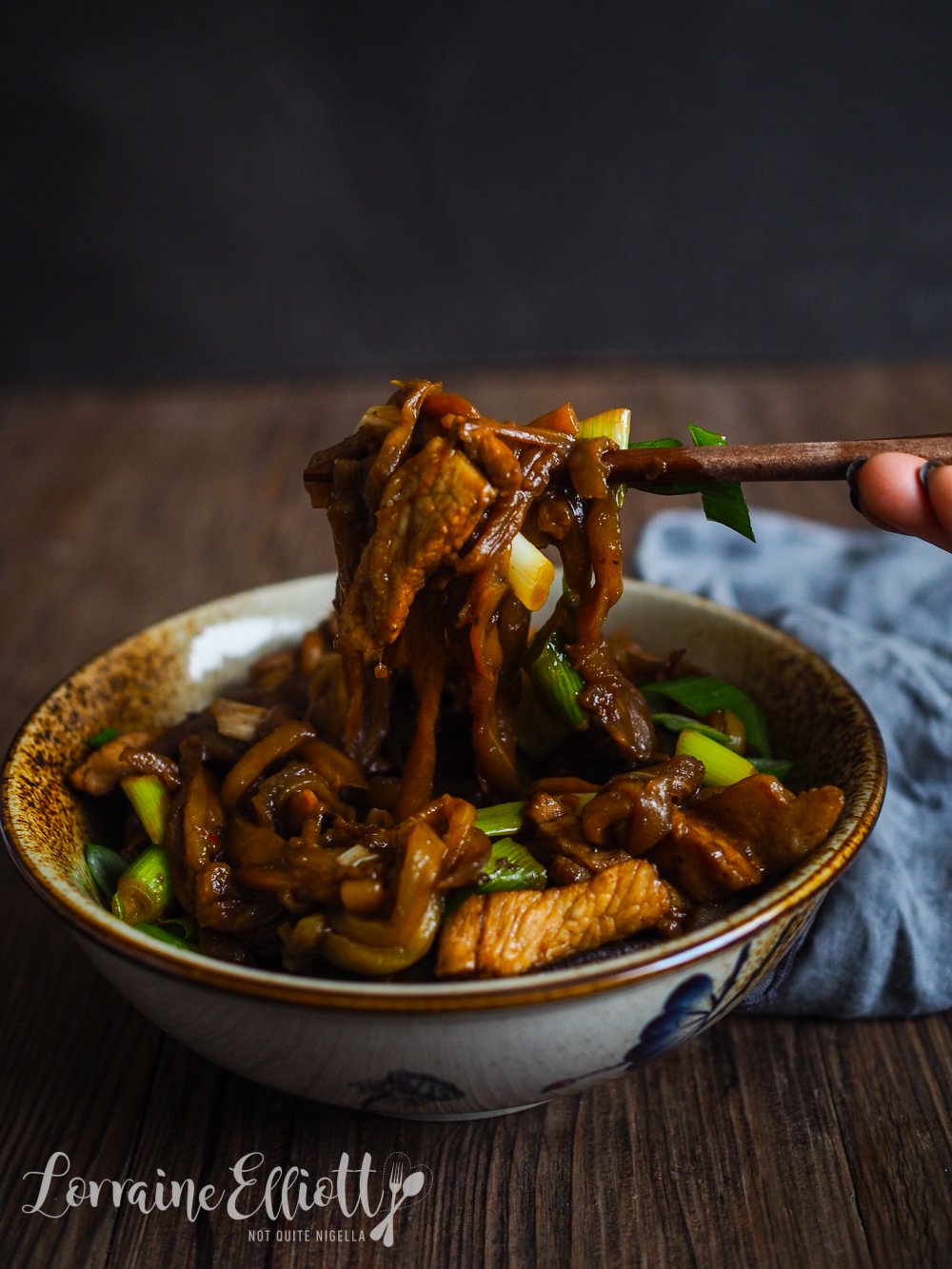 Eggplants can be weird beasts. They are very watery so spiralising on will not end well. The best thing is really to slice them with a mandolin to an even thickness and then from there, slice them into noodles. Using a mandolin to julienne them makes them a little too thin and while that's fine, they quickly turn into a mushy mess if you try to add sauces to them.

Eggplants can be tricky to buy too. Slender Japanese eggplants are good to use because they aren't bitter but for these sorts of noodles it is best to use a large eggplant. I was buying some at the market the other day.

At one stand I overheard a man talking about eggplants. He was an older, bespectacled man with two younger women who were hanging onto his every word. Perhaps he was a chef or something but he grabbed a shiny, large eggplant by the round end.

"You can use the thinner ones but these big ones can be used-as long as they are firm, like when you squeeze a woman's firm ass!" and then he squeezed the eggplant for emphasis. His manner was that of a dodgy uncle (we all have one of those) and he squeezed that eggplant with a just too much relish although I had to agree, that large eggplants are fine if they are firm (and now I will always think of squeezing asses when I go to feel them). The other thing to look for with eggplants is that the stem is bright green and not too floppy too but he didn't mention that, perhaps because it wasn't sexually titillating enough. 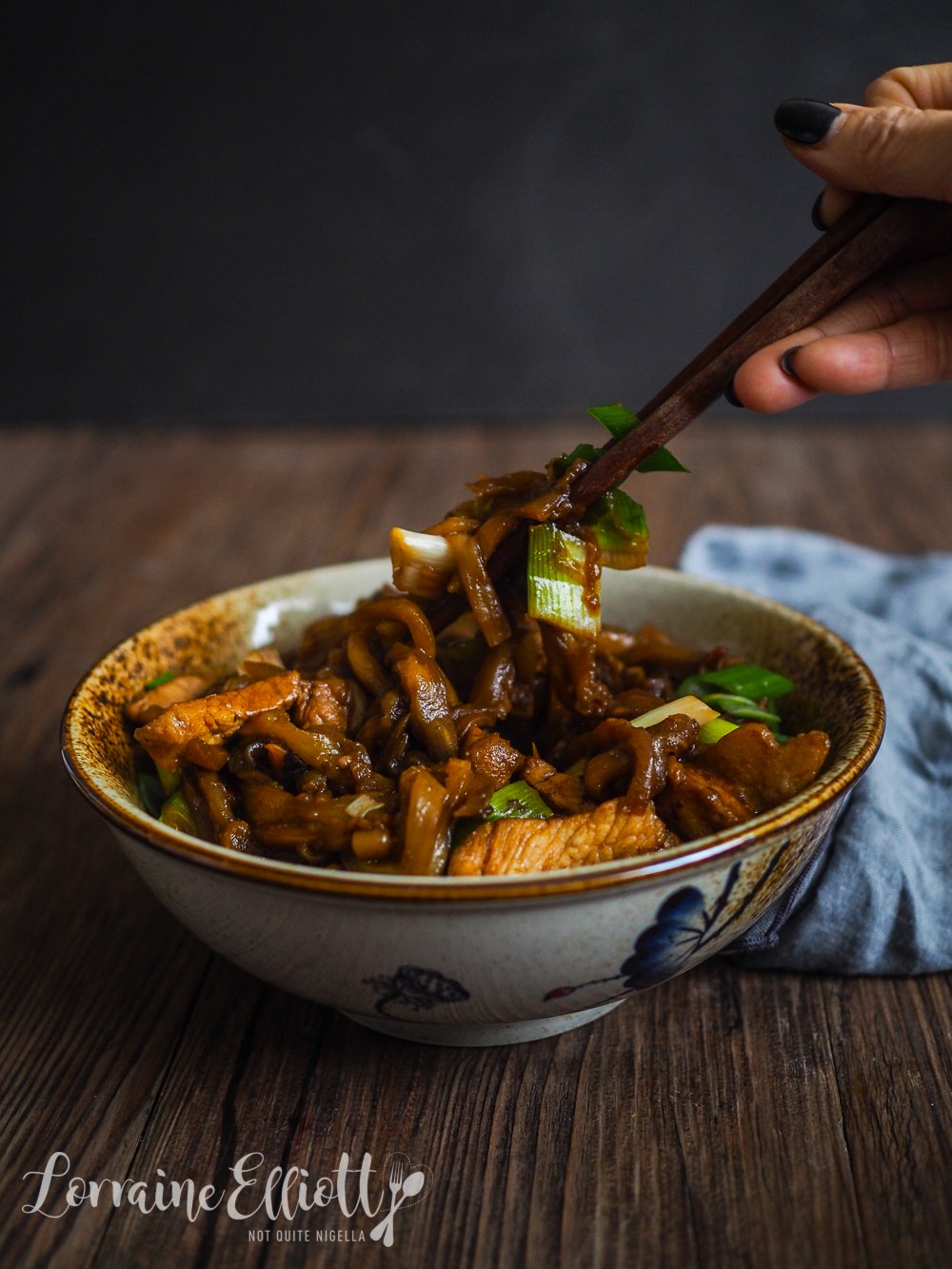 I hope you'll give this recipe a go if you want to add some more vegetables to your diet or want something quick-it's 15 minutes I absolutely pinky-swear. It's made using these premade sauces that I keep in my fridge. The first one is one I use a lot. It adds so much flavour to everything. Just add your favourite sauce whether it be a pasta sauce or a noodle sauce and the eggplant is all that you need for that amazing vegetable rich meal!

So tell me Dear Reader, do you have trouble buying eggplants? What is your favourite way to make a dish healthier? 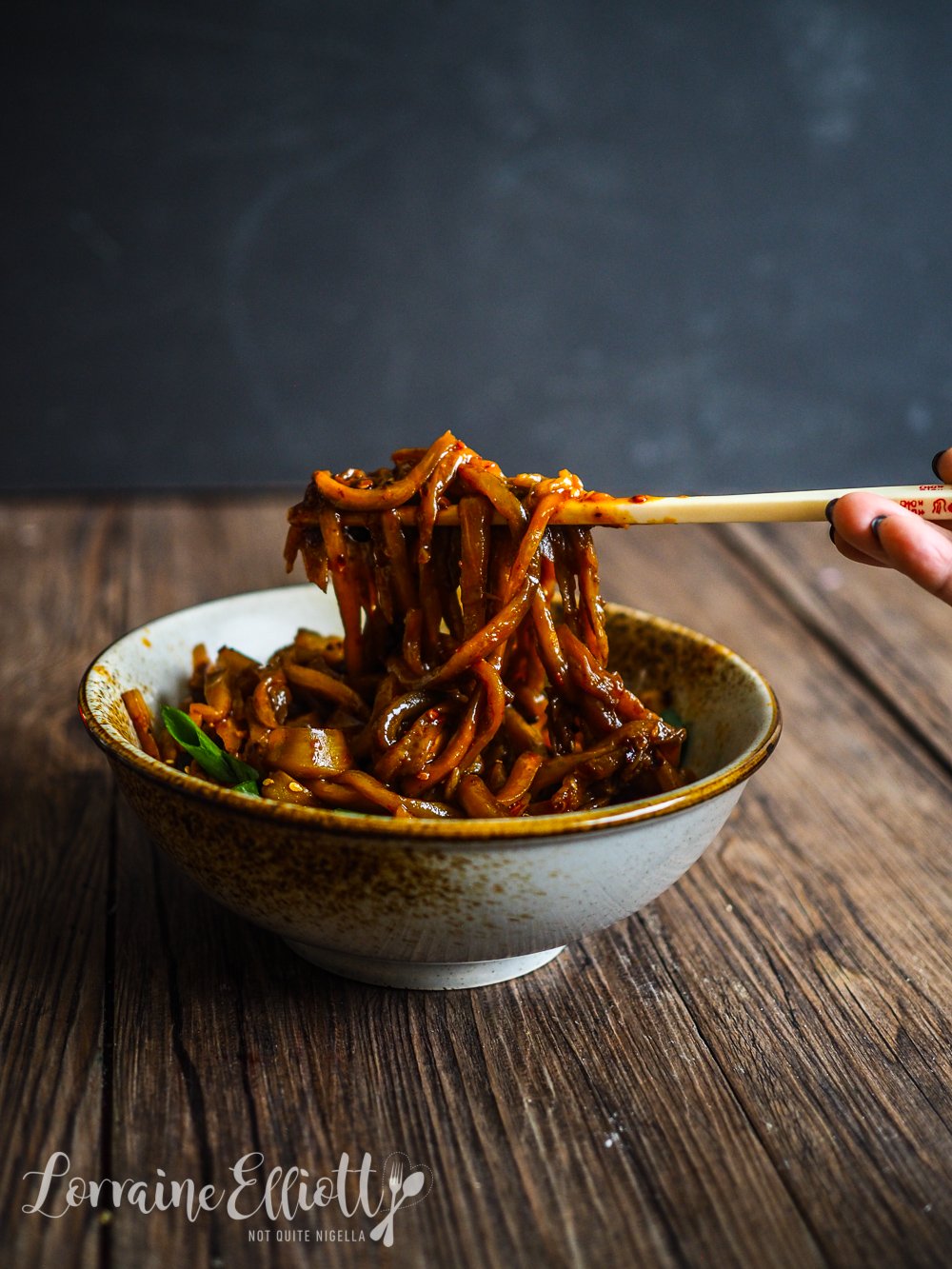 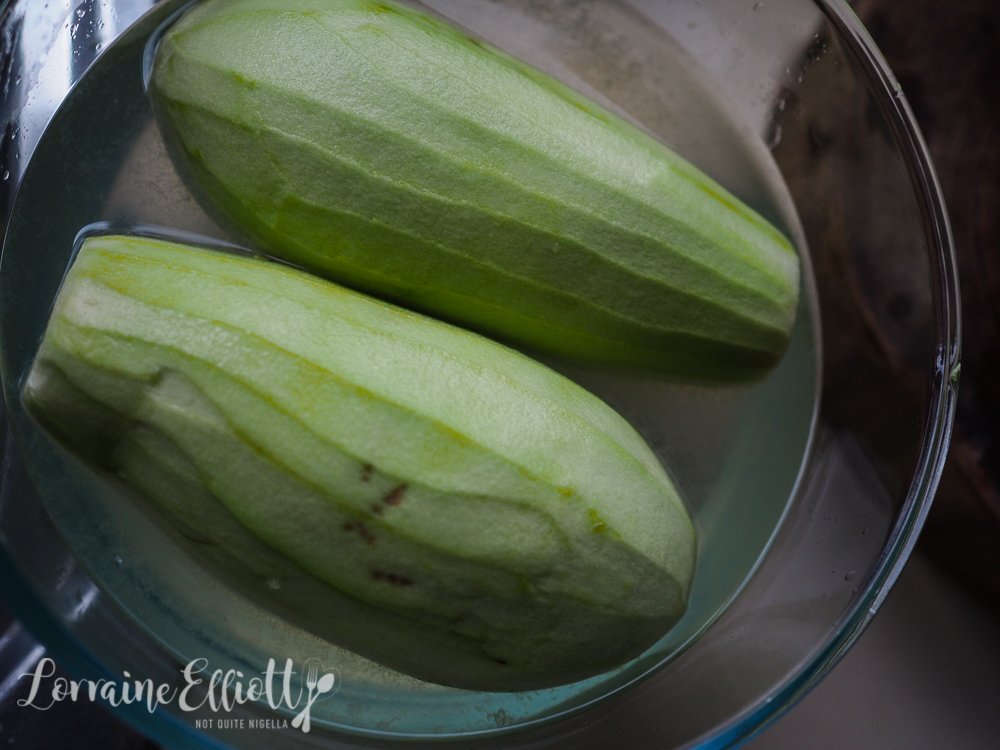 Step 1 - Have a large bowl of water with juice of a lemon in it (to prevent browning). Remove the stems from the eggplants and peel them. Use a mandolin set with slice attachment on 3 setting (the thickest). 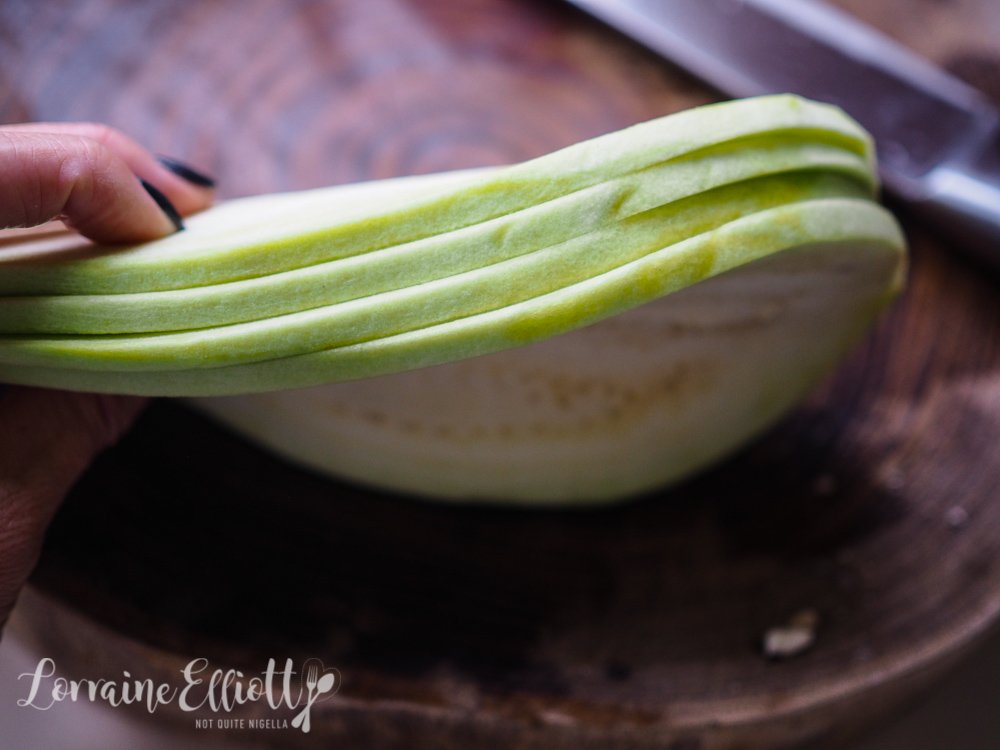 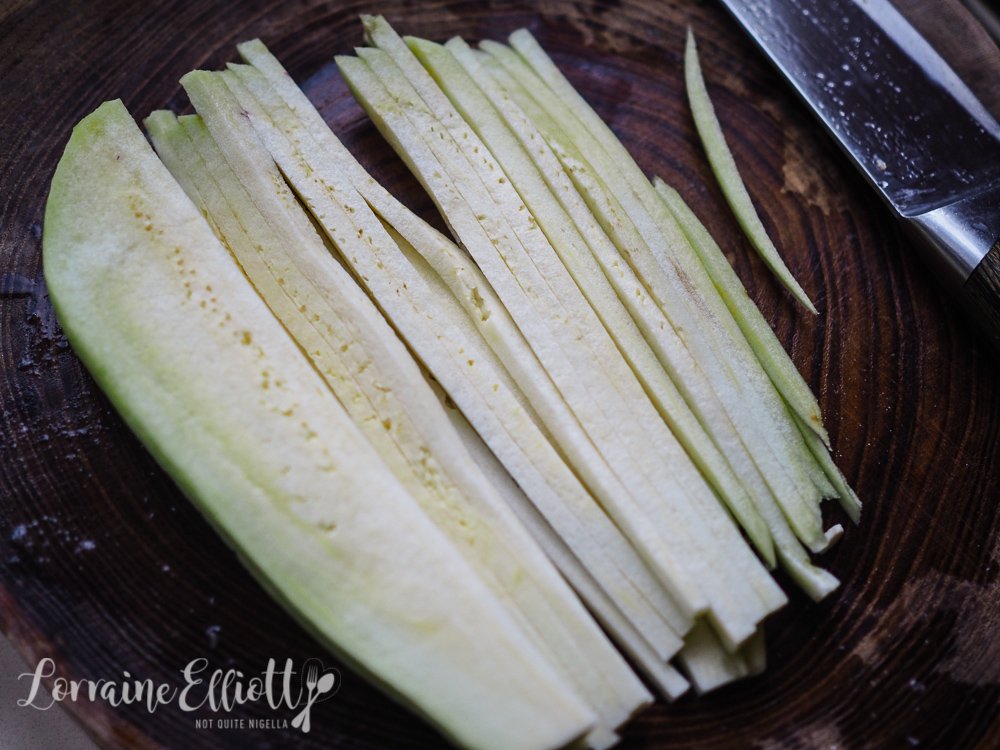 Step 2 - Take 4 or so slices at a time and stack them on top of each other and slice into noodles-think of udon noodles for the thickness. Return to the lemon water while the frypan or wok comes to high heat. 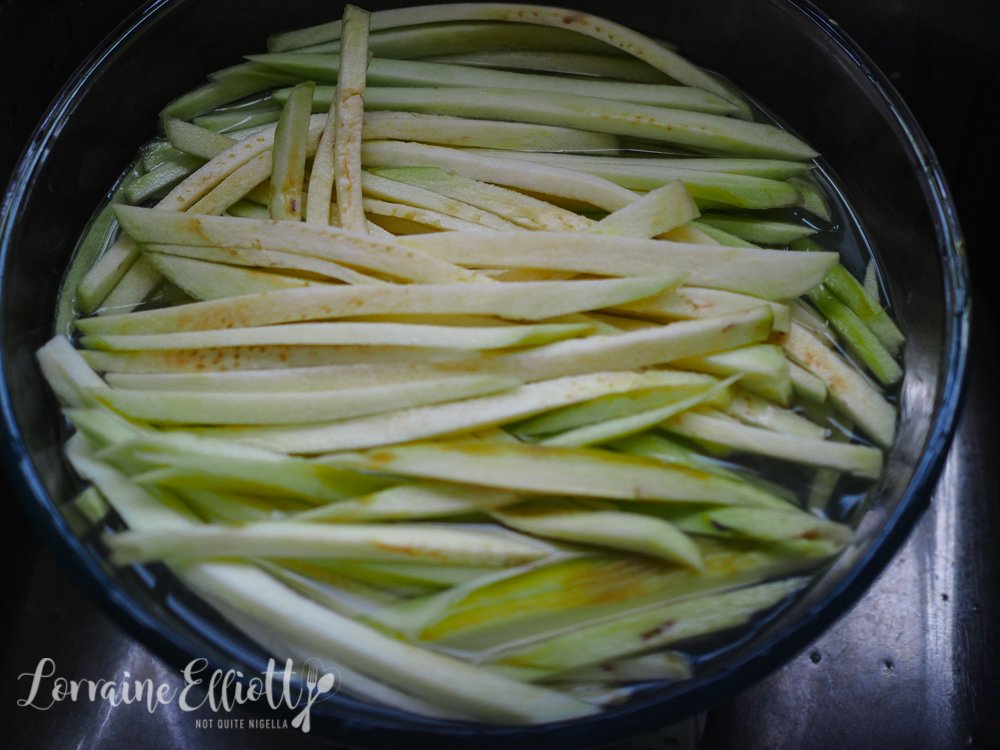 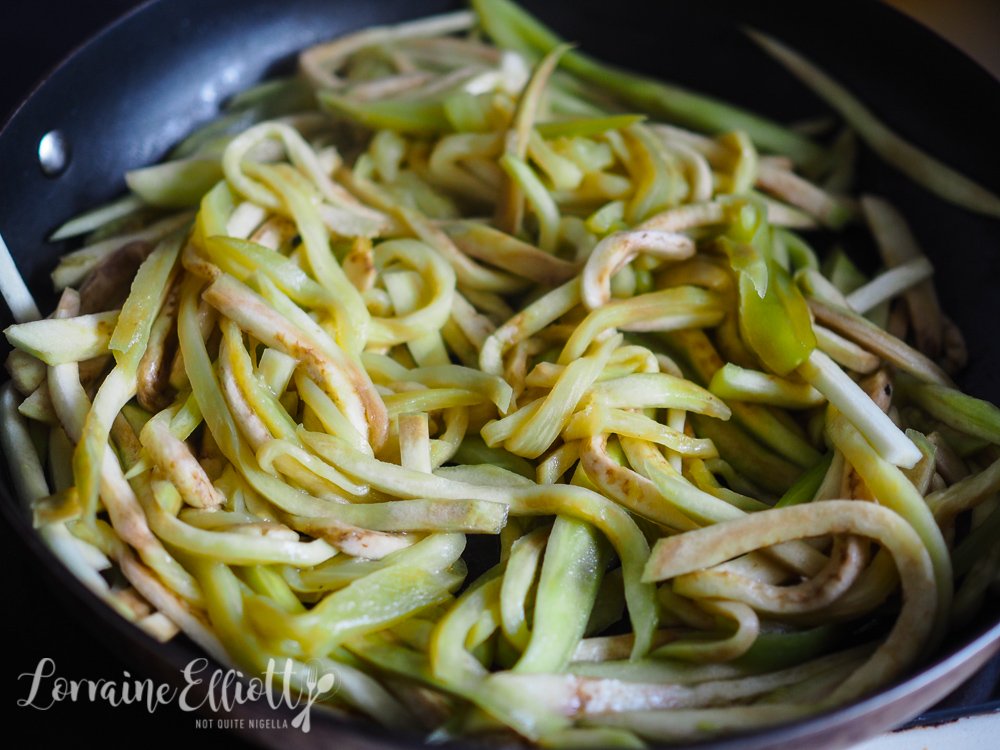 Step 3 - Place a large frypan or wok on medium high heat and add some oil. Add the eggplant shreds and fry adding more oil if needed. It will reduce down a lot. When the eggplant is softer and cooked down (it will only take 3 minutes or so) remove it from the pan and fry the onion for a minute and then add pork slices. When cooked through add the eggplant back to the pan with the soy sauces, mirin, sake and sesame oil and stir to coat all of the "noodles". 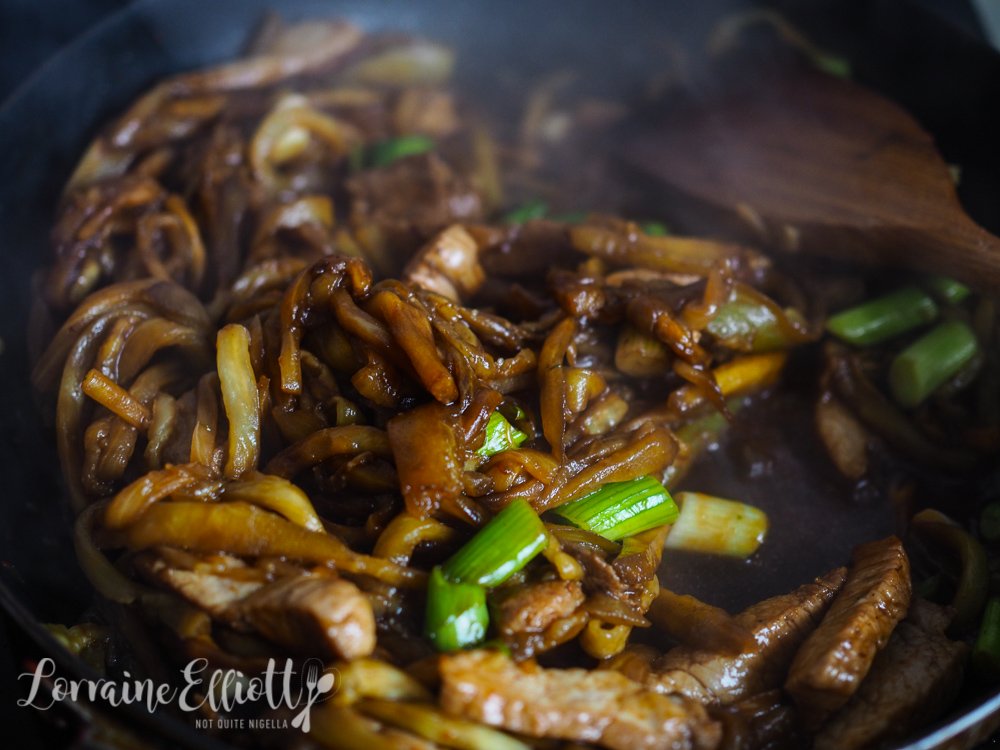