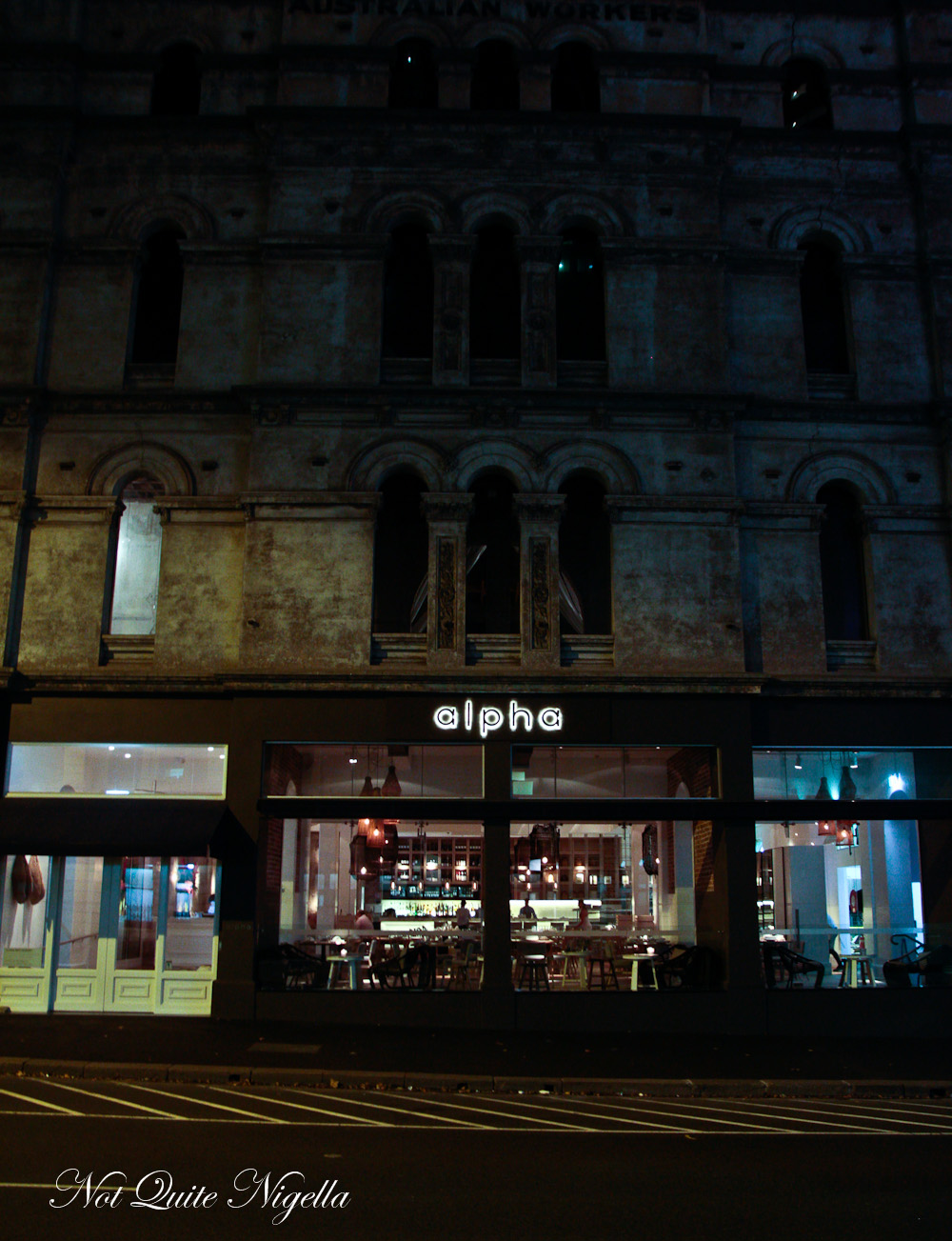 The advantage of going to restaurants with people from that country is that you get an opinion on the cuisine from someone that have lived and grown up with that cuisine. So when Alpha popped up in Sydney last year, we knew that we had to go with Nick in tow. 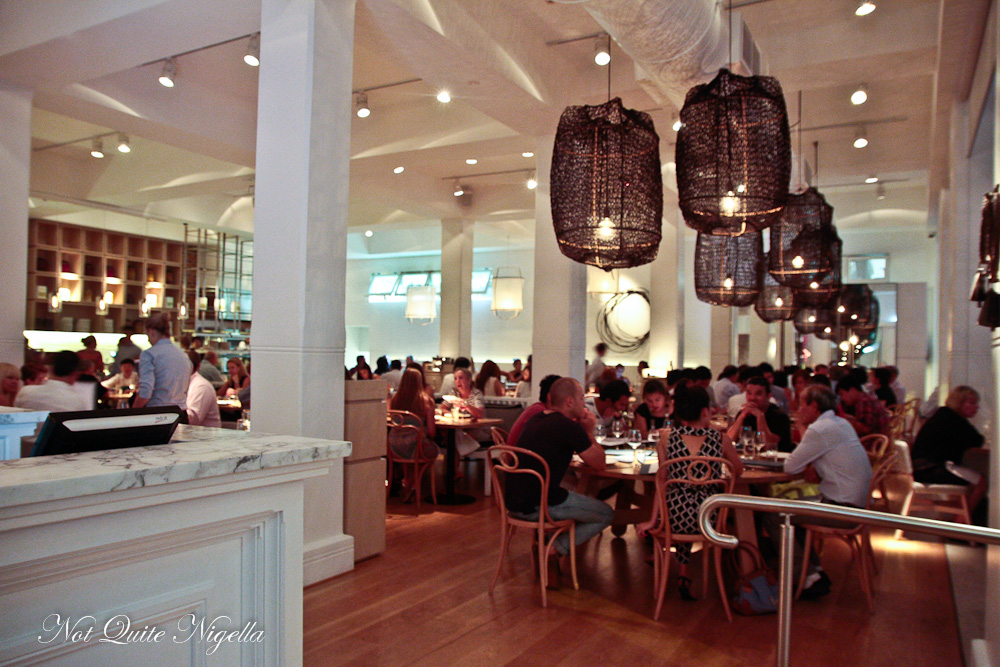 Promising to order in Greek if the waitress was comely, Nick is temporarily stunned into silence by the friendly waitress who brushes him on the shoulder not once, twice but three times. Suddenly the confident Nick is rattled. Who is making the moves here? 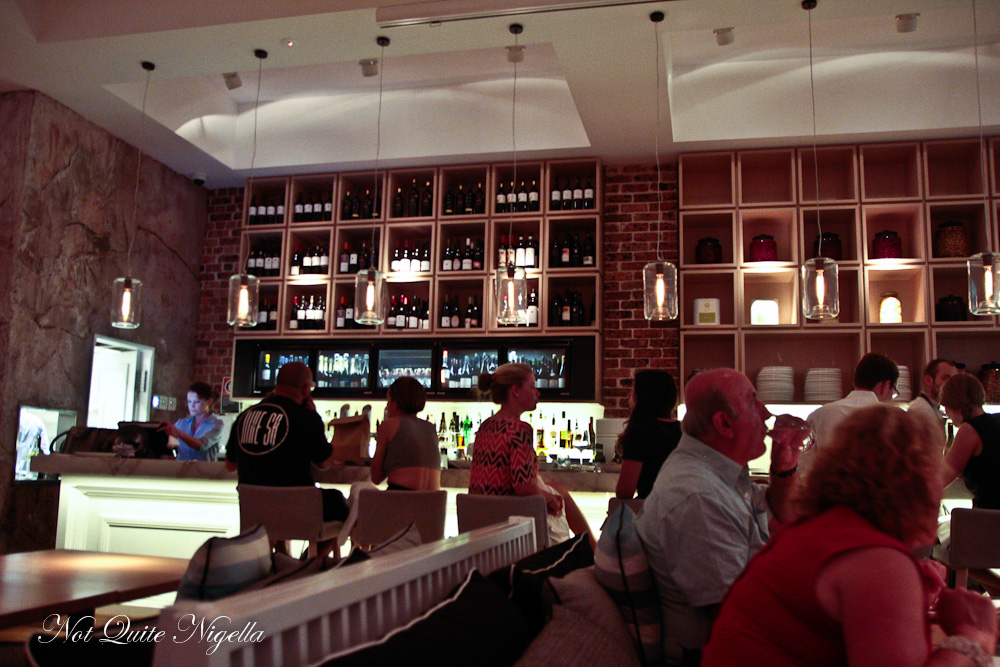 With Nick temporarily dazed, Belinda takes charge of the menu. I put in a request for taramasalata and we have to have lamb because that's just expected. We spy a spanakopita pie being brought to another table and add that and another few dishes to the list. Our waitress come back concerned about the amount that we've order and she is worried it is too much. As a former restaurateur, Belinda is surprised whenever waitstaff do this. 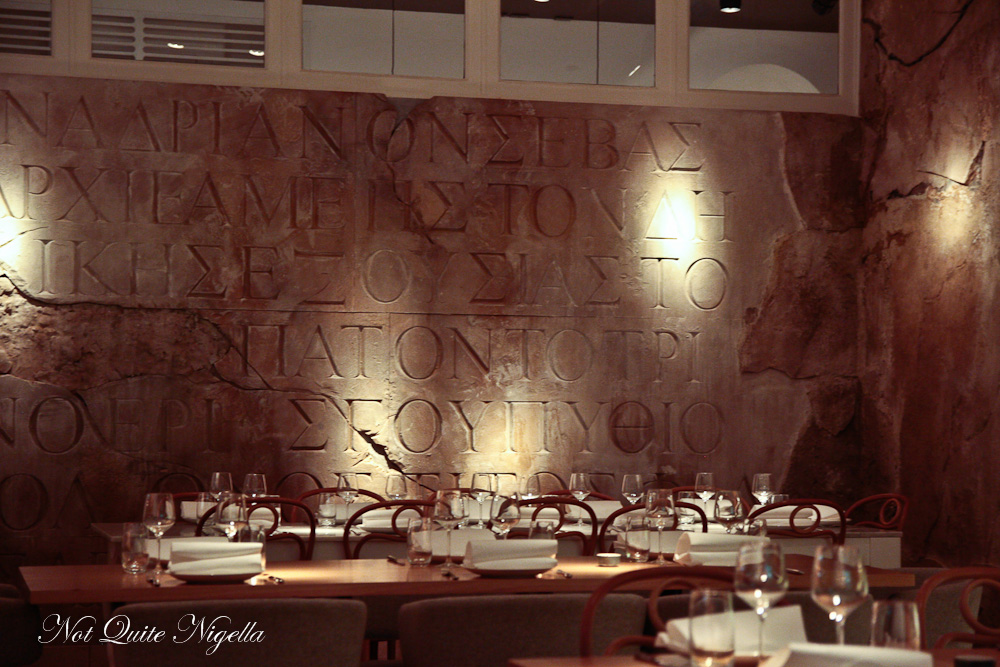 Alpha is situated in a building that was built in the late 1870's as a protestant church. After that it was occupied by the Australian Workers Union and now it is Alpha. With the backing of the Hellenic Group, chef Peter Conistis (who we see busy in the kitchen and bar area) has re-emerged and created a menu with classic Greek Taverna style dishes plus three of his vintage classics. It's one enormous room and it's noisy and boisterous this Thursday evening where the noise hits you as soon as you walk in. One stone wall is decorated with Greek writing while the rest of the room is modern and sleek. We nab a booth table in the centre. 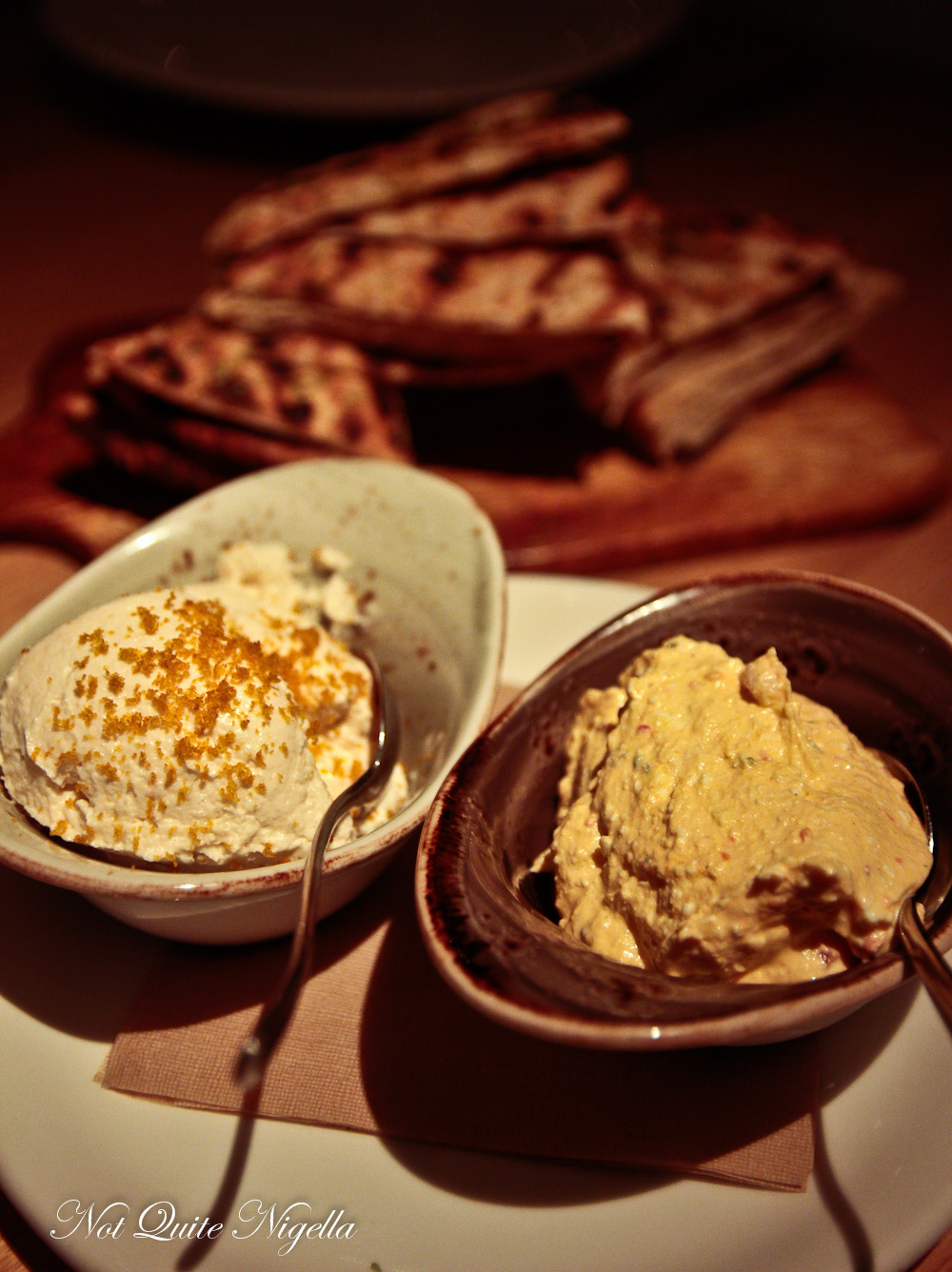 I think I could eat an enormous bowl of taramasalata and not even flinch. It's made here with white cod roe and is absolutely delicious. The tiro kafteri is a sheep's milk feta with red pepper and chilli. I would have loved more red pepper and spice in this and it's mostly creamy and cheesy. The pita spread is scattered with herbs and served warm. 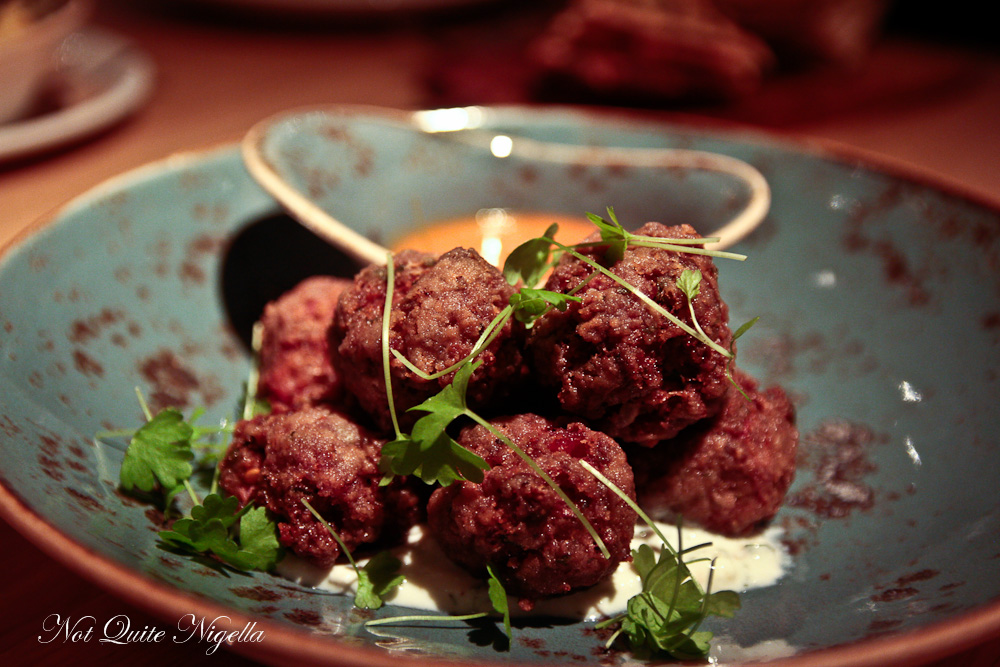 The wagyu keftedes are wagyu beef meatballs with a crispy outer and tender interior. They're served with a tomato based salsa and coriander yogurt. They come eight to a serve. 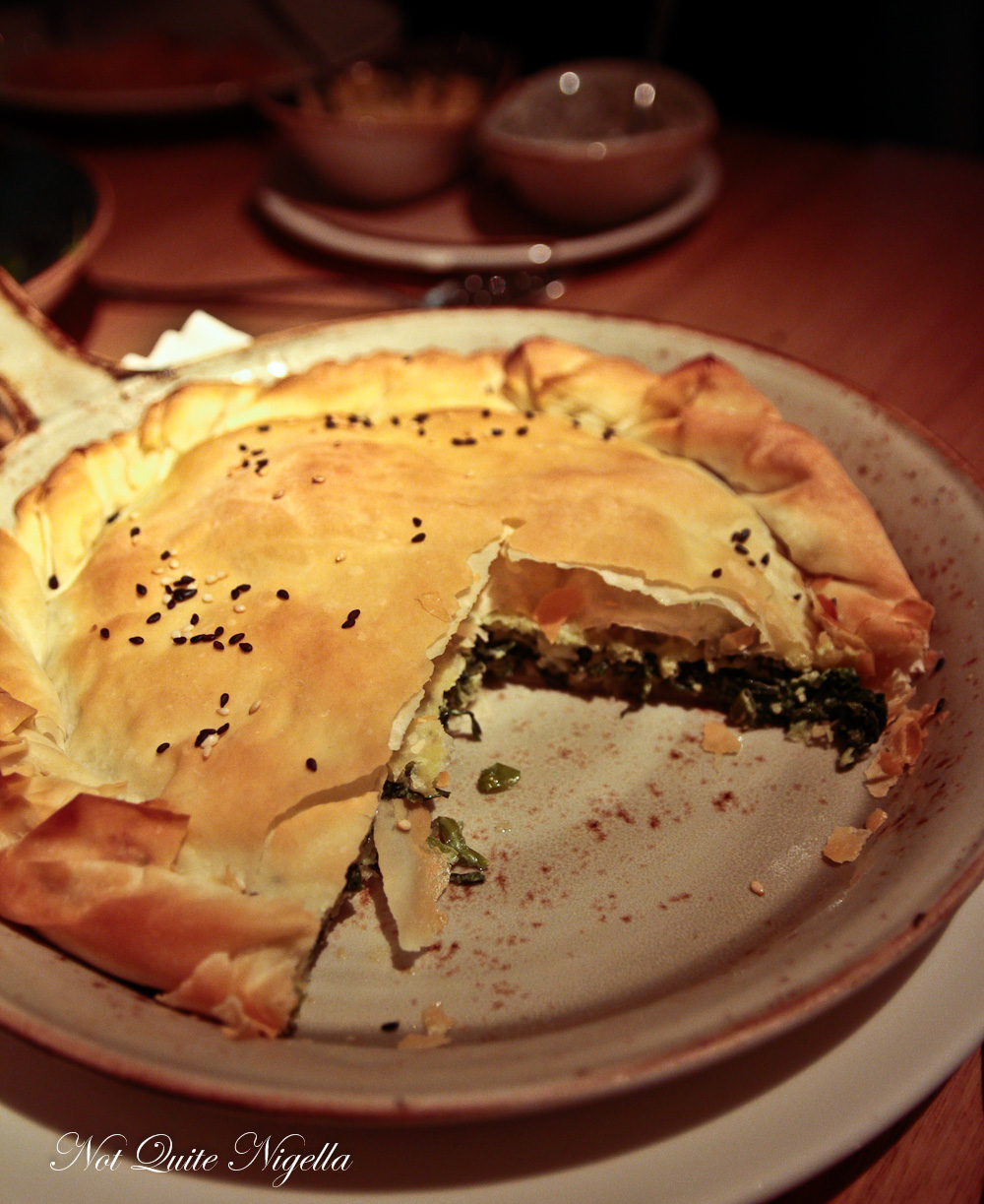 The enormous spinach and feta pie comes out and it smells tempting. The pastry is thin and layered although a bit thick in parts where it is rolled. It looks quite puffed up and full but there's a large bubble of air above the filling which is a light mixture of spinach, leeks, feta and dill. 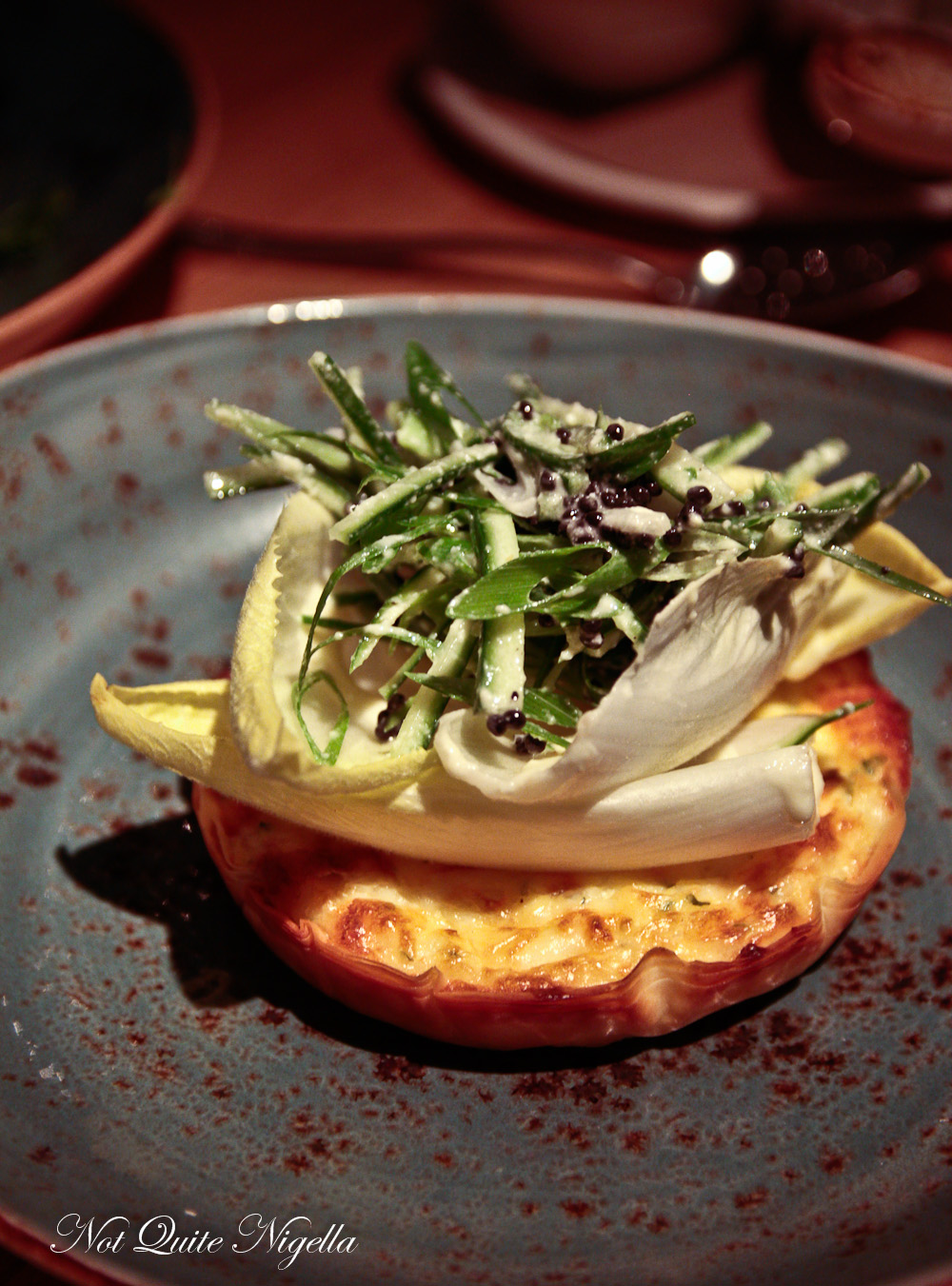 From the vintage menu, the crab tart is like a creamy rich quiche held together by three thin layers of filo pastry. It is given lightness from the refreshing salad that sits atop. This is made up of caviar, witlof, green onions and cucumber. 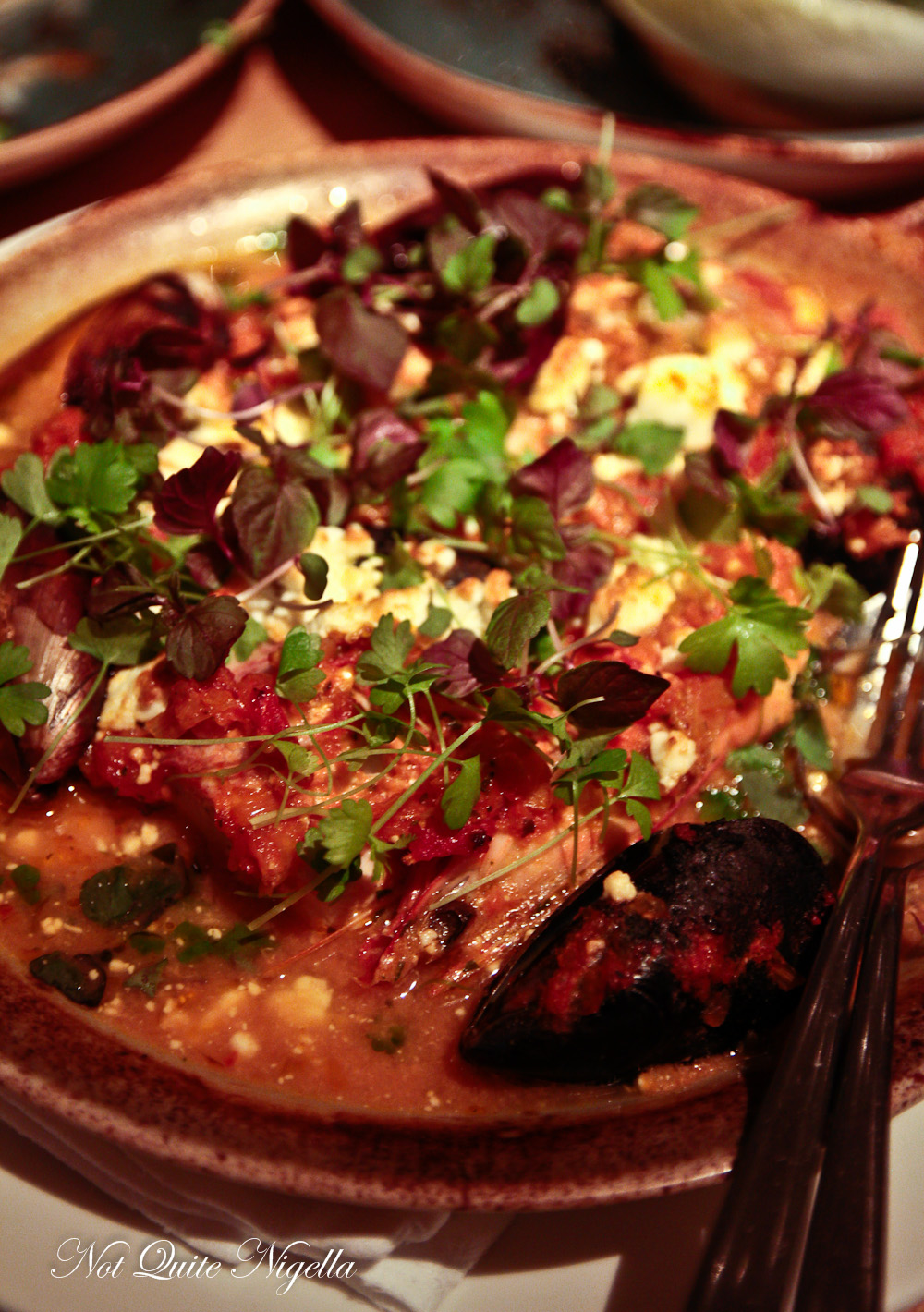 Nick is in his element when the seafood saganaki arrives. He takes a mussel shell, removes the mussel and scoops up the flavoursome broth with it. The hiramasa kingfish is perfectly cooked as are the king prawns and black mussels and the topping of feta adds a salty richness to the dish. 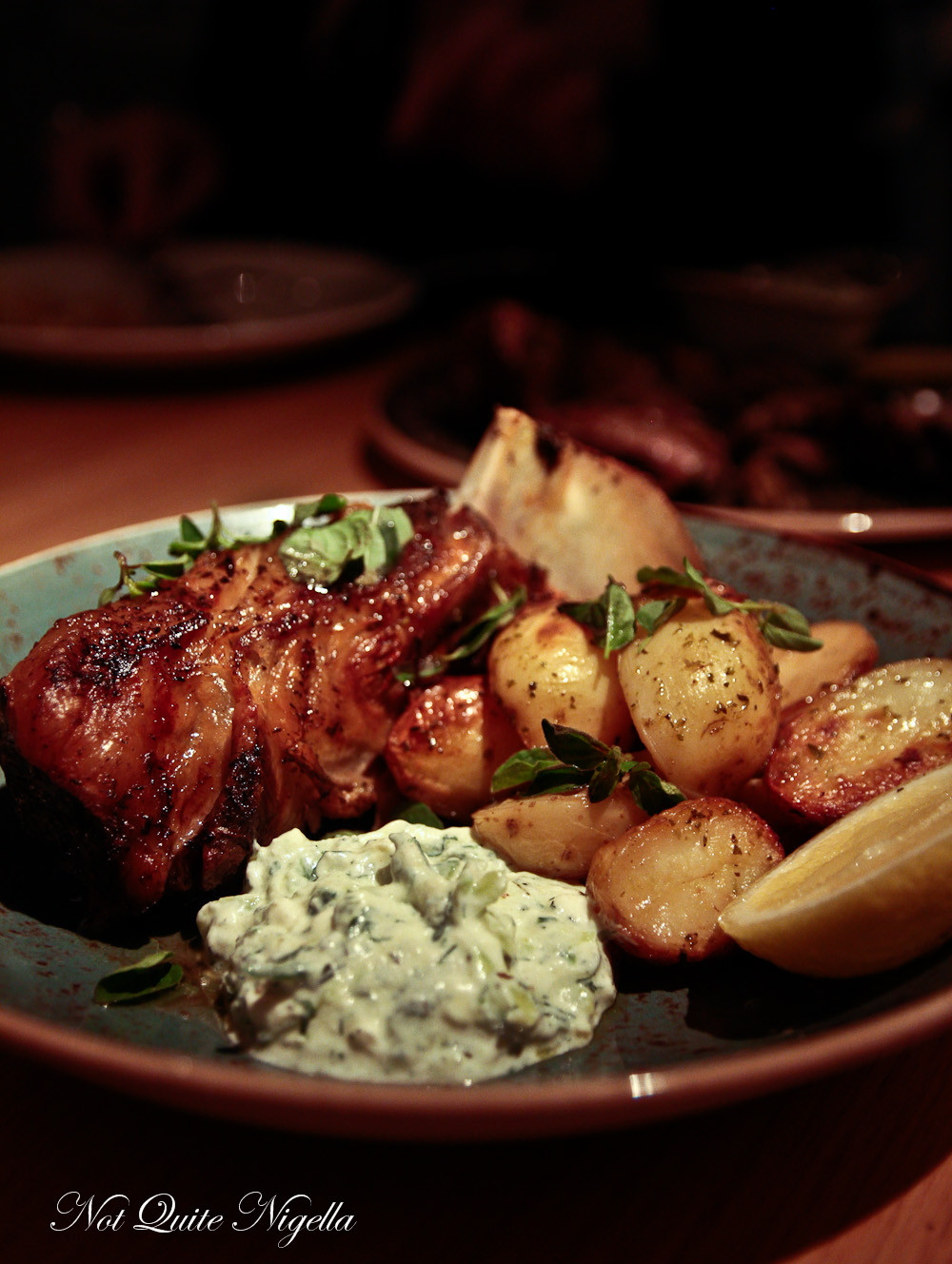 There's a small break before we get our rich meat mains and our plates are cleared and the waitress cleans the table. "Sorry about the phone. I'd put it away but I get very important calls on it," says Nick trying to impress the waitress while we roll our eyes and laugh. Our lamb arrives - we had chosen the small version of the lamb shoulder although the table next to us looked to have ordered the large which looked impressive. This is soft, yielding and unctuous with that unmistakable flavour of lamb. A good squeeze of lemon adds piquancy and the halved potatoes are a good accompaniment as well as the creamy cucumber and yogurt tzatziki. 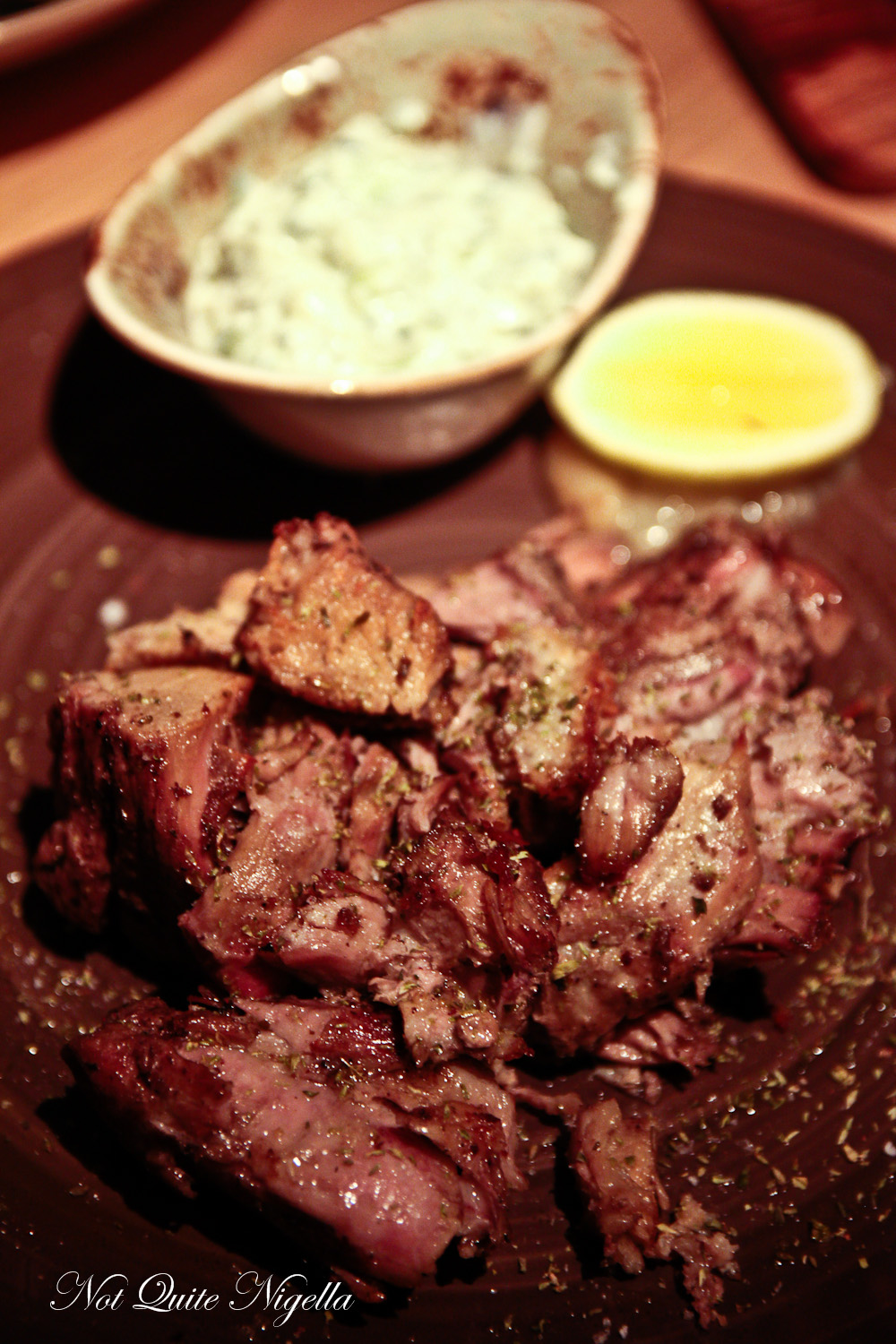 Oh how I do love a good roast pork and this was stickily good with comforting flavours of oregano, red wine and lemon. The tzatziki is perfect to cut through the soft richness of the pieces. 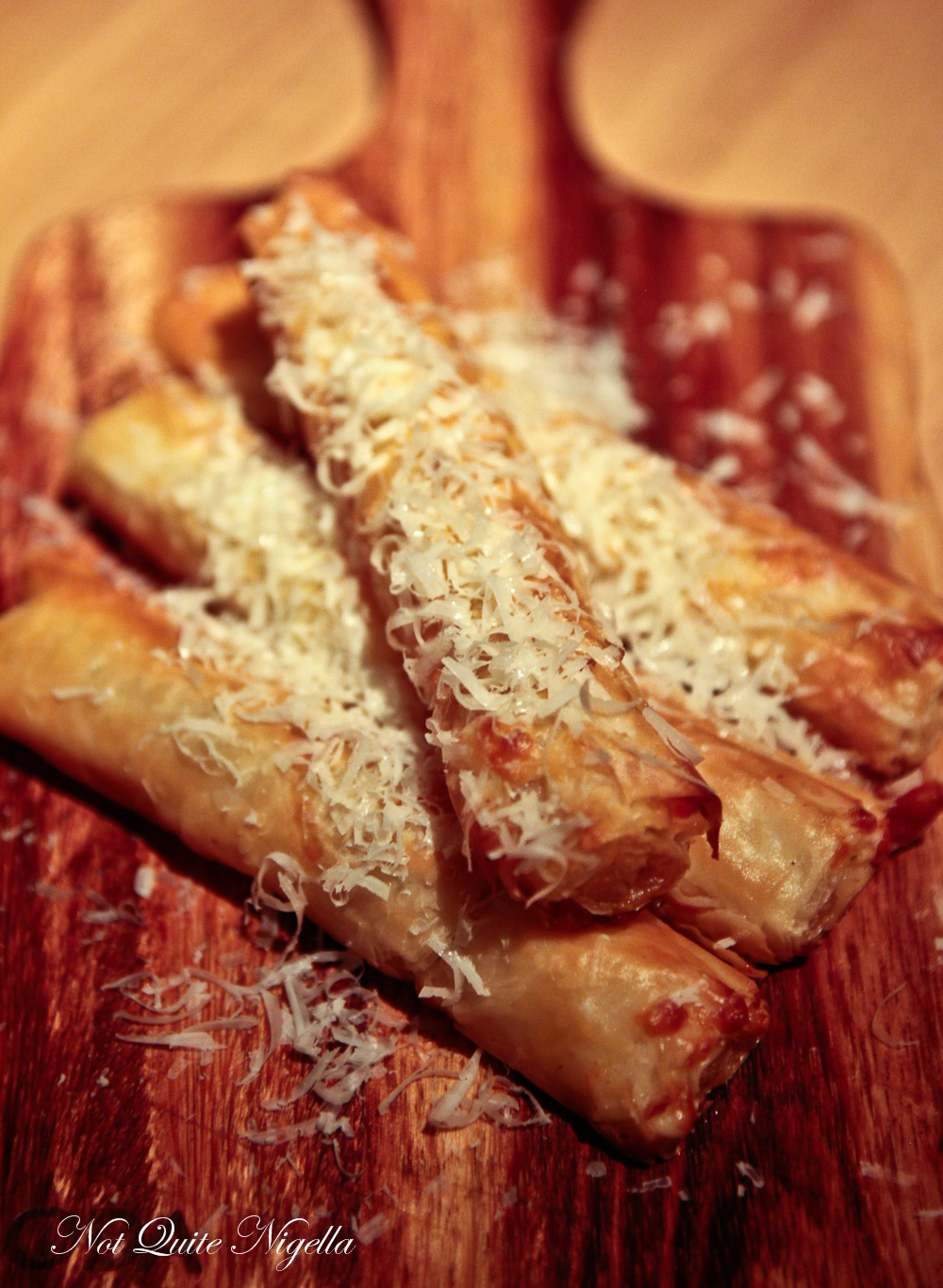 We had no idea how the roasted parsnips would arrive and thought that there might be more vegetables. Belinda wasn't smitten with this but I actually liked them. I'm a fan of anything that gets me near pastry and they're slender pieces of tender parsnip and caramelised onions rolled in filo pastry and showered with grated kefalotiri. But if you're looking for just vegetables, this is perhaps not the side to order.

I visit the bathroom and both times that I've dined at Alpha, I've found that the bathrooms are quite unkempt, particularly halfway through the night. They're unisex bathrooms and there's often a lot of water and paper towels on the floors near the sink. 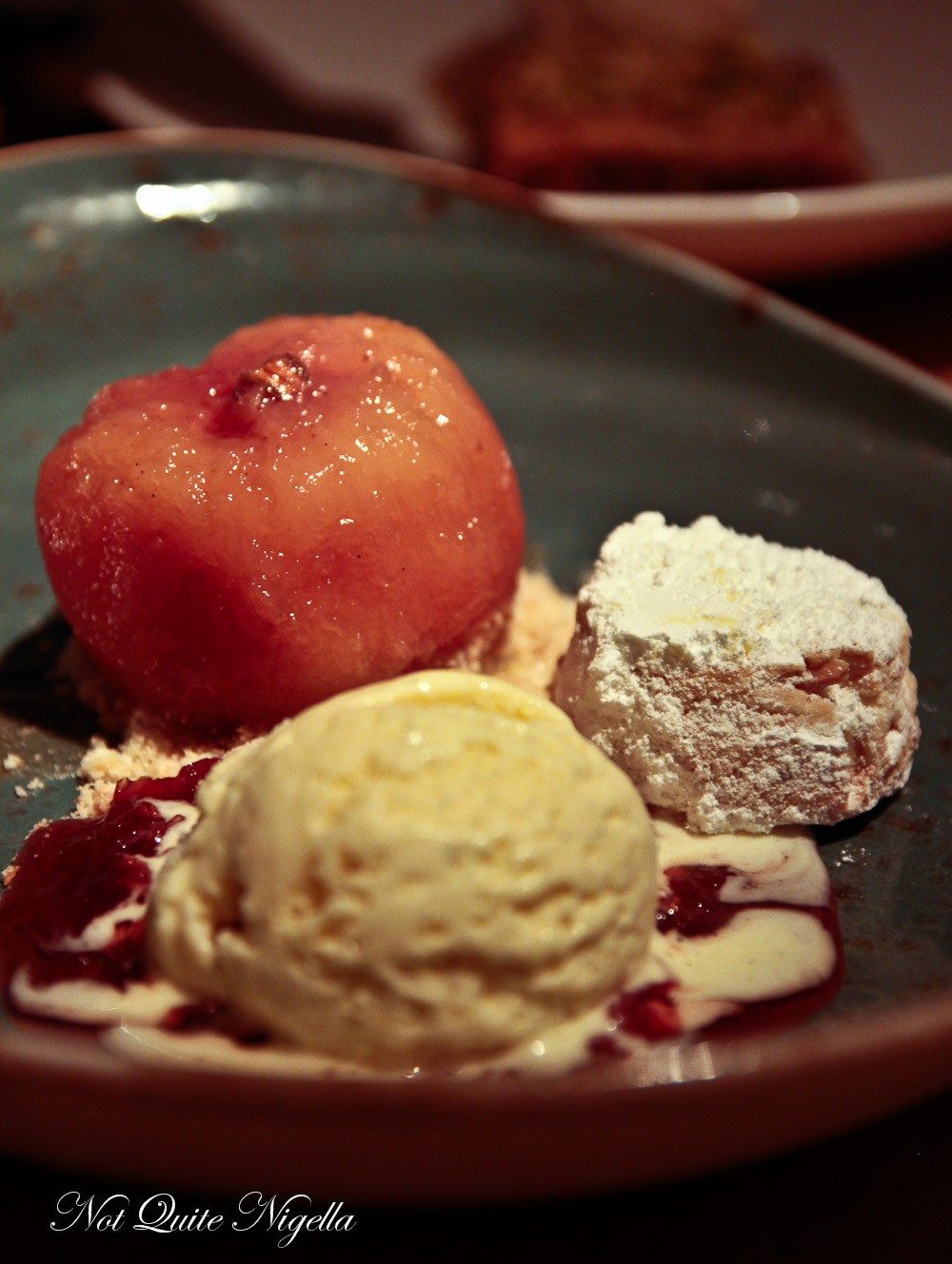 There are five choices for dessert and as it is a sticky hot evening we go for two ice creams plus a baklava for good measure. Just before we had been discussing the virtues of lemons and lemon curd and this scoop of creamy, dreamy ice cream is like lemon curd in ice cream form. It sits on a bed of sweet Samos muscat and a cherry and rosewater spoon sweet. To the side is an almond shortbread. 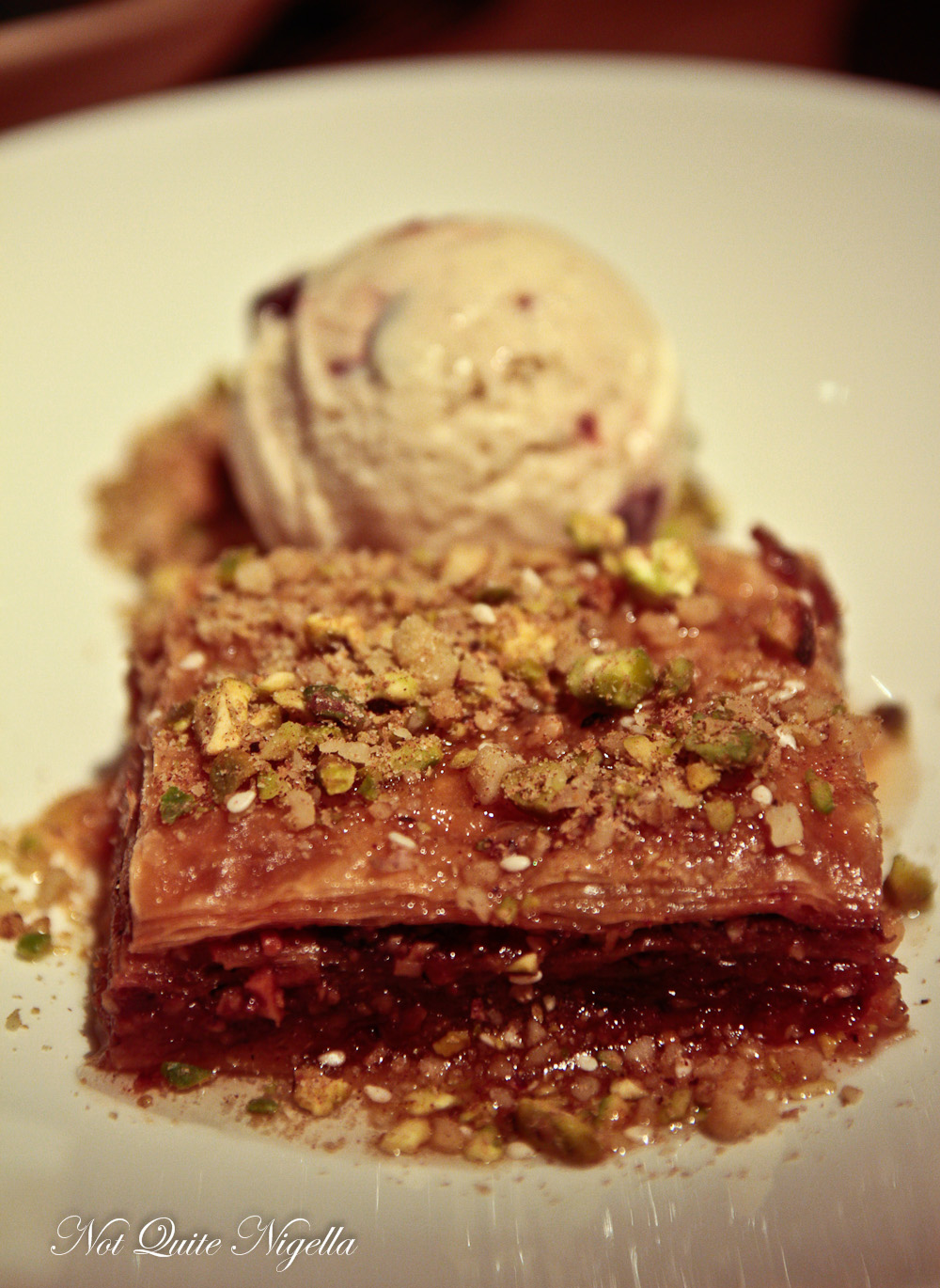 I was expecting more chocolate in the chocolate hazelnut baklava which is good but isn't particularly different from regular baklava. It's drenched in a honey syrup and served with sour cherry ice cream. 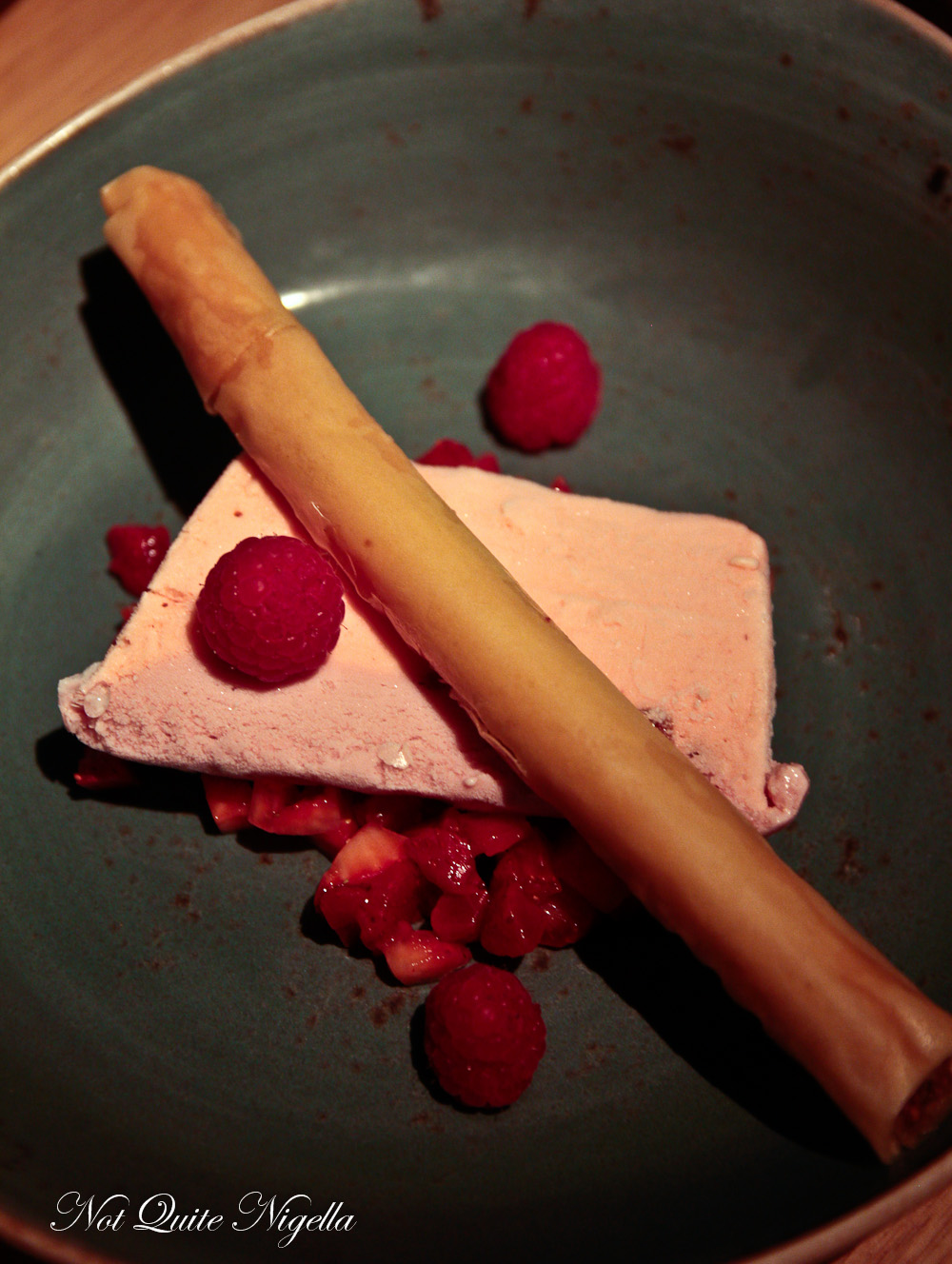 We all adored the loukoumi delight ice cream slice which had just the right amount of rose and berry flavour to it. The bottom layer of the ice cream slice is studded with small, chewy, sweet pieces of loukoumi or Turkish delight. There are fresh diced raspberries and strawberries as well as a filo cigar filled with crushed nuts.

So tell me Dear Reader, do you have a favourite Greek dish that you always order? And do you have single friends that flirt with bar and waitstaff? And what do you think of unisex bathrooms?