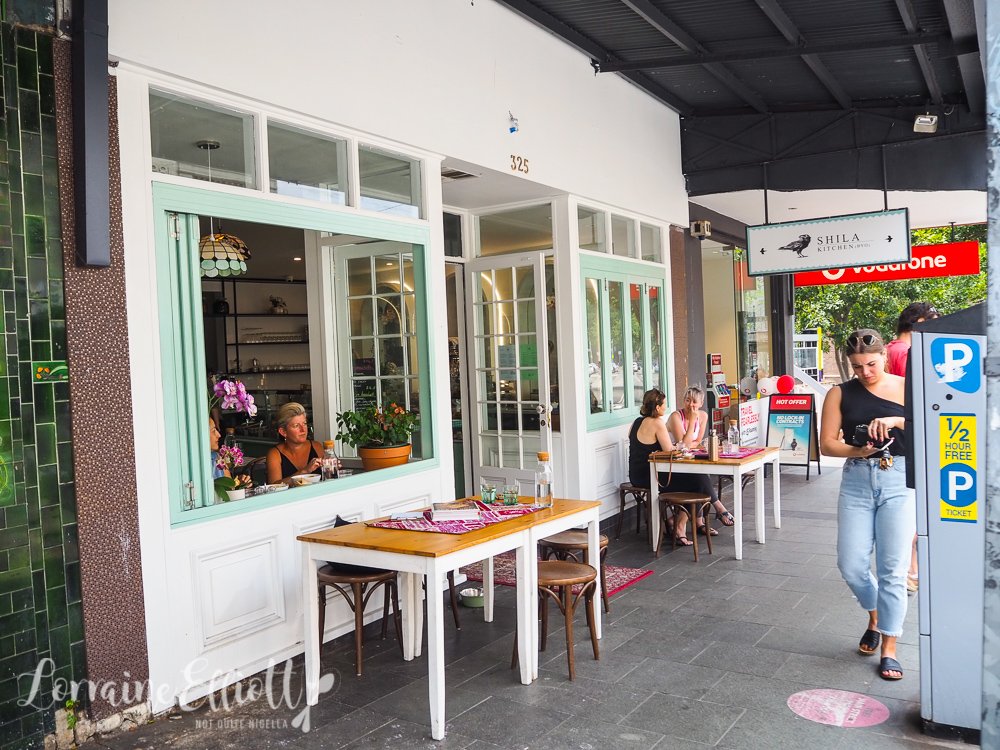 Shila is a brand new Persian cafe and tea house on Darling Street in Balmain. They serve up delicious Persian dishes like enormous meatballs that hold a delicious surprise inside, Afghan bread and divine dips and there's also a tea menu and sweets for an afternoon tea break. 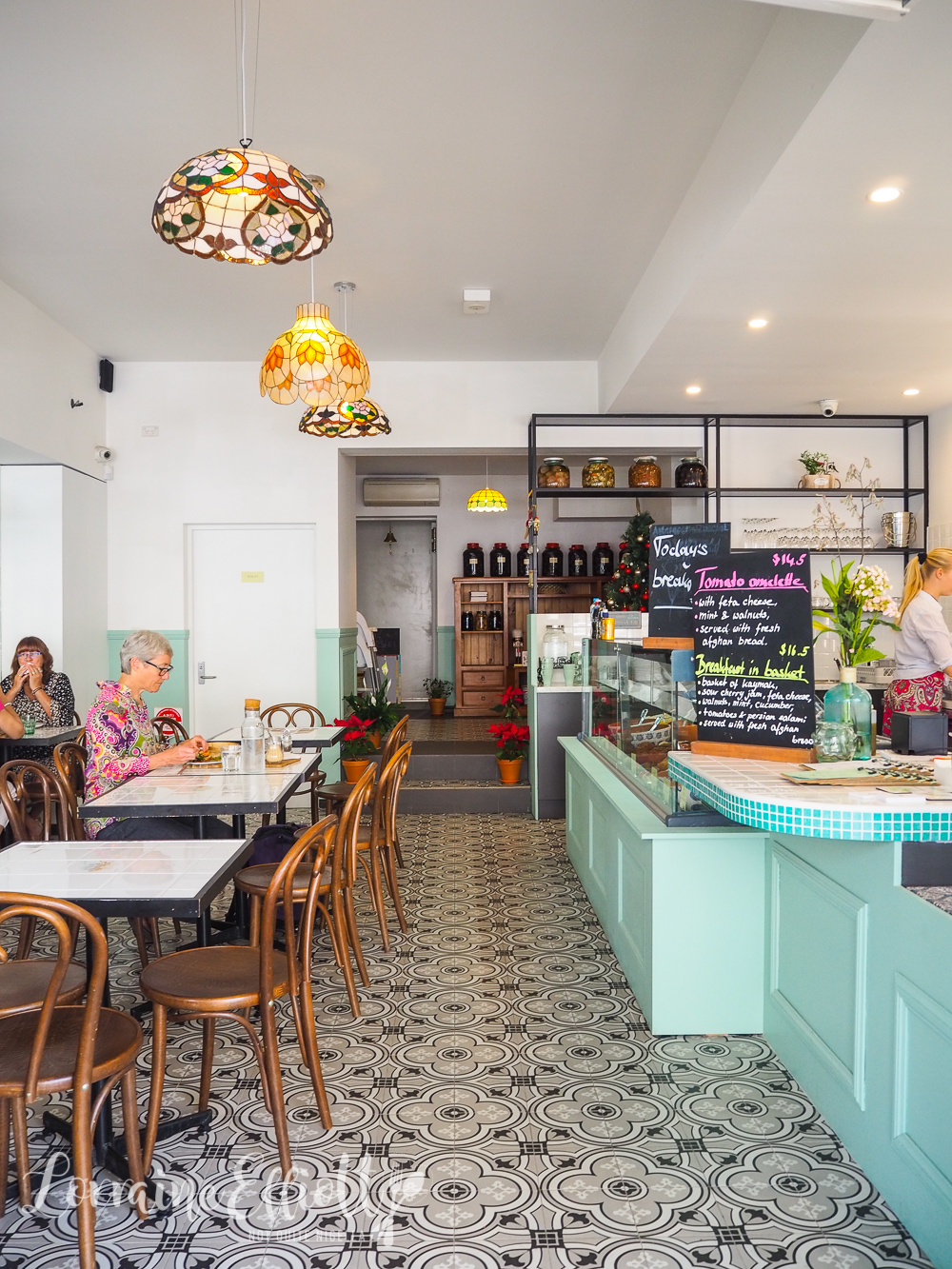 For Saba Taghavi and his partner Zoya Ashari, they want people to get to know Persian cuisine. It's a cuisine that isn't hugely represented in Australia and yet is very accessible. If you enjoy Turkish food, chances are you'll probably like Persian. Saba used to work with Mr NQN and holds regular Persian food nights. 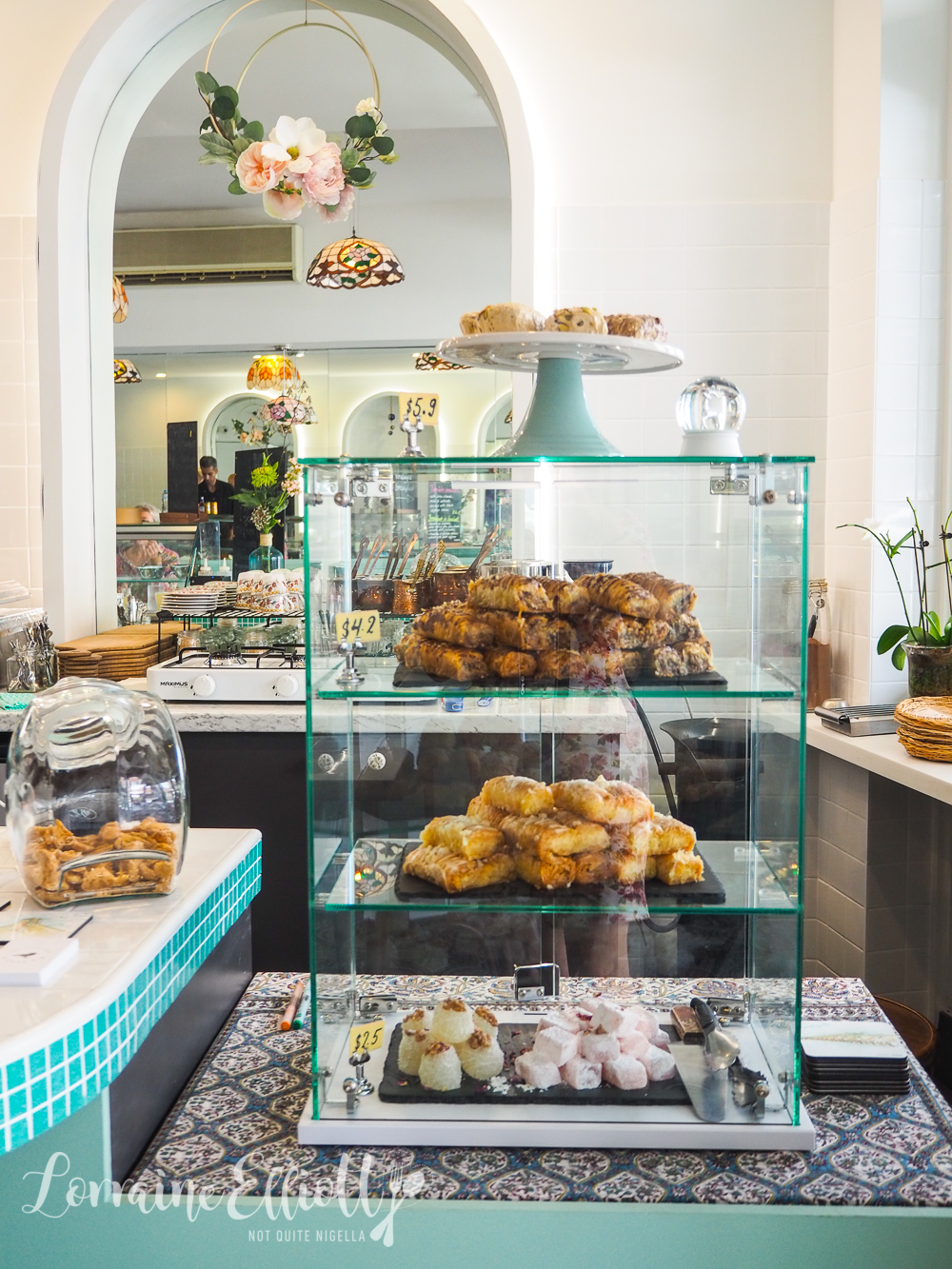 What does the name Shila mean? "Shila is a fictional black bird that comes from "A thousand and one night stories" who is a friend of Sinbad traveling with him through his adventures and discoveries. One day Sinbad finds out that Shila used to be a beautiful girl that was cursed by a magician and she had forgot how beautiful she used to be," says Saba. 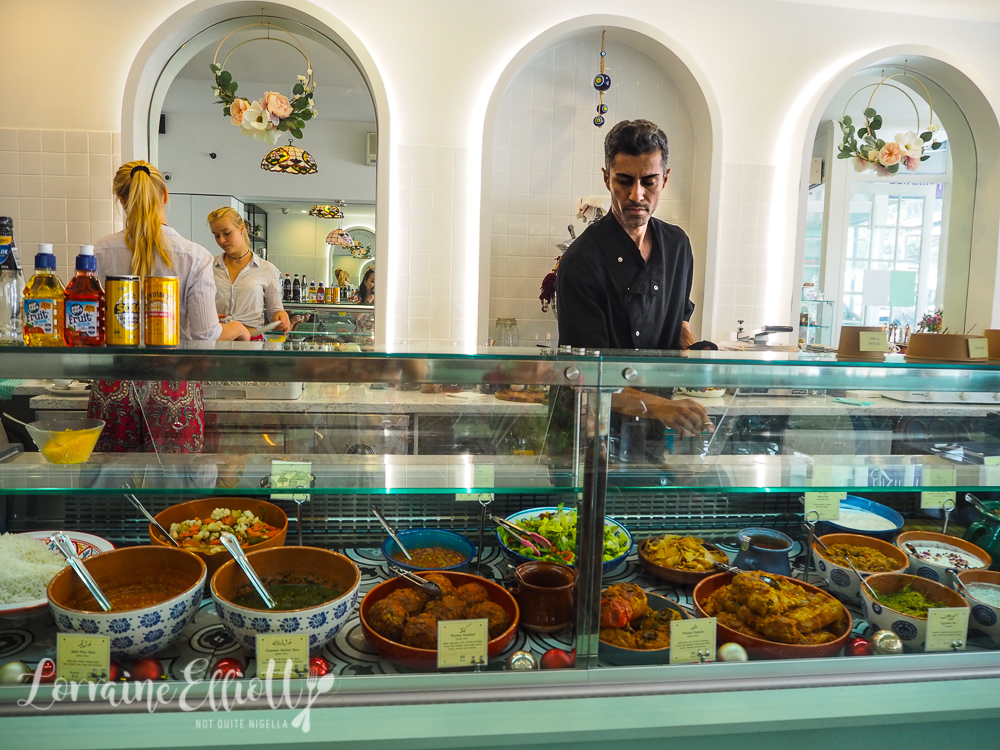 Shila has a tea menu as well as a lunch menu with 8 items and on weekends there are also two additional breakfast items. There are around half a dozen dips always on the menu and these are vegetarian with many of them yogurt based.

A key taste pillar of Persian cuisine is the sour flavour. Persian food tends to have a mild sourness to it (like yogurt) and you don't often get sweet flavours in mains (even the desserts are less sweet). 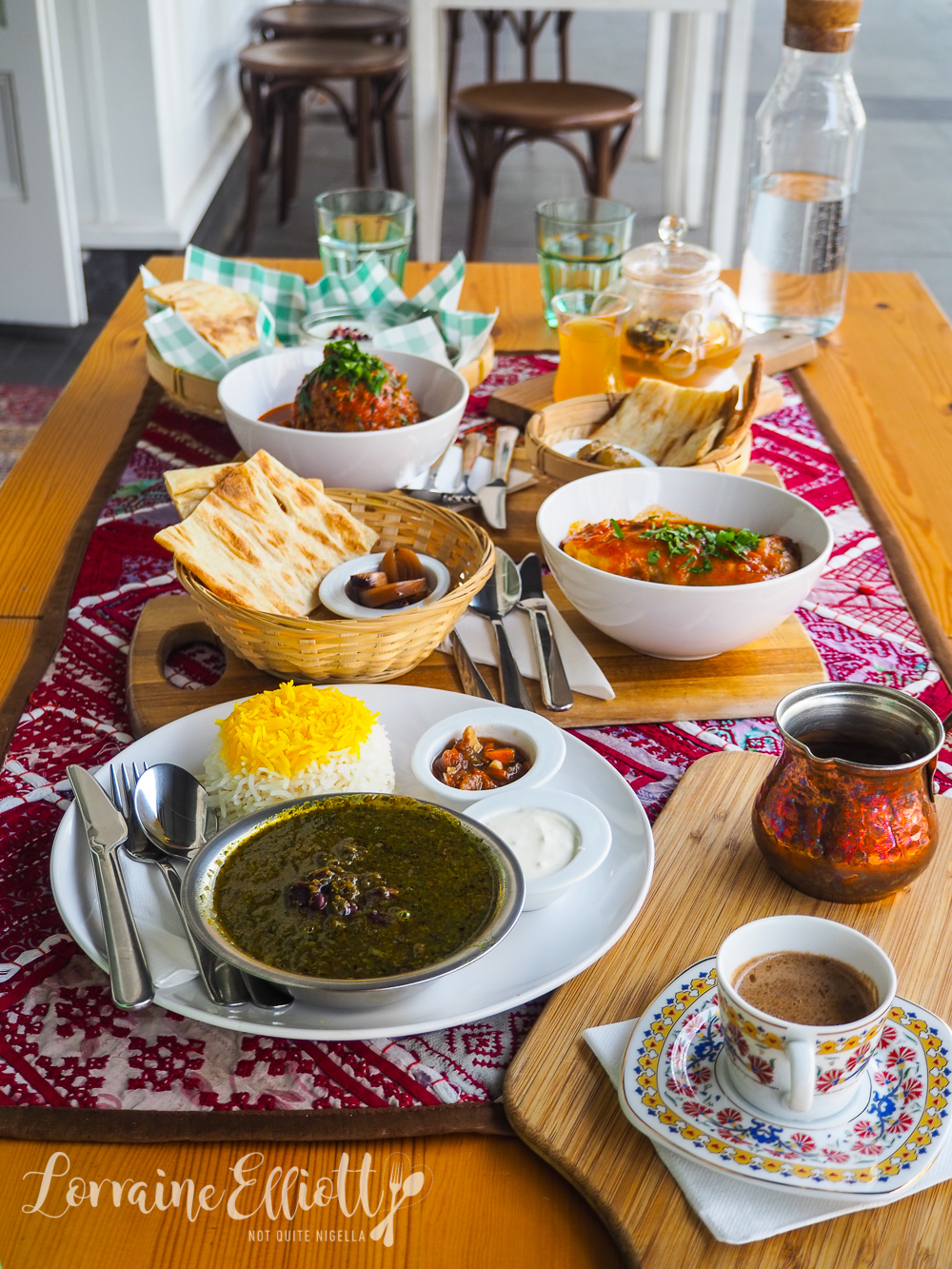 Also, "Herbs are the base of Persian food. You can find use of herbs in every corner of this cuisine and its not just about the taste value of them its mainly the health values of them," says Saba. 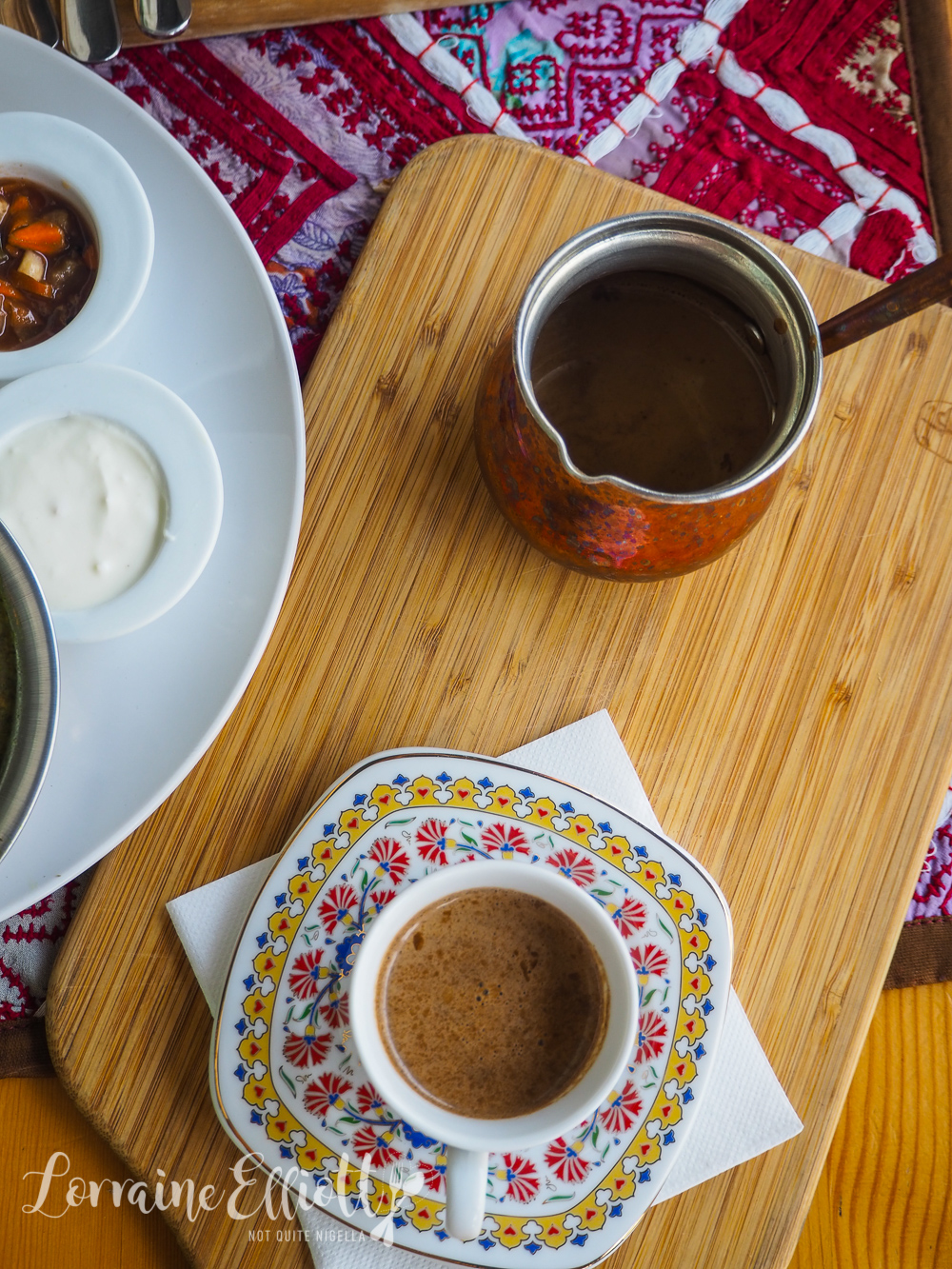 We start with a Persian coffee which is their riff on a Turkish coffee but milder, it's strength tempered by cooking the coffee with milk. 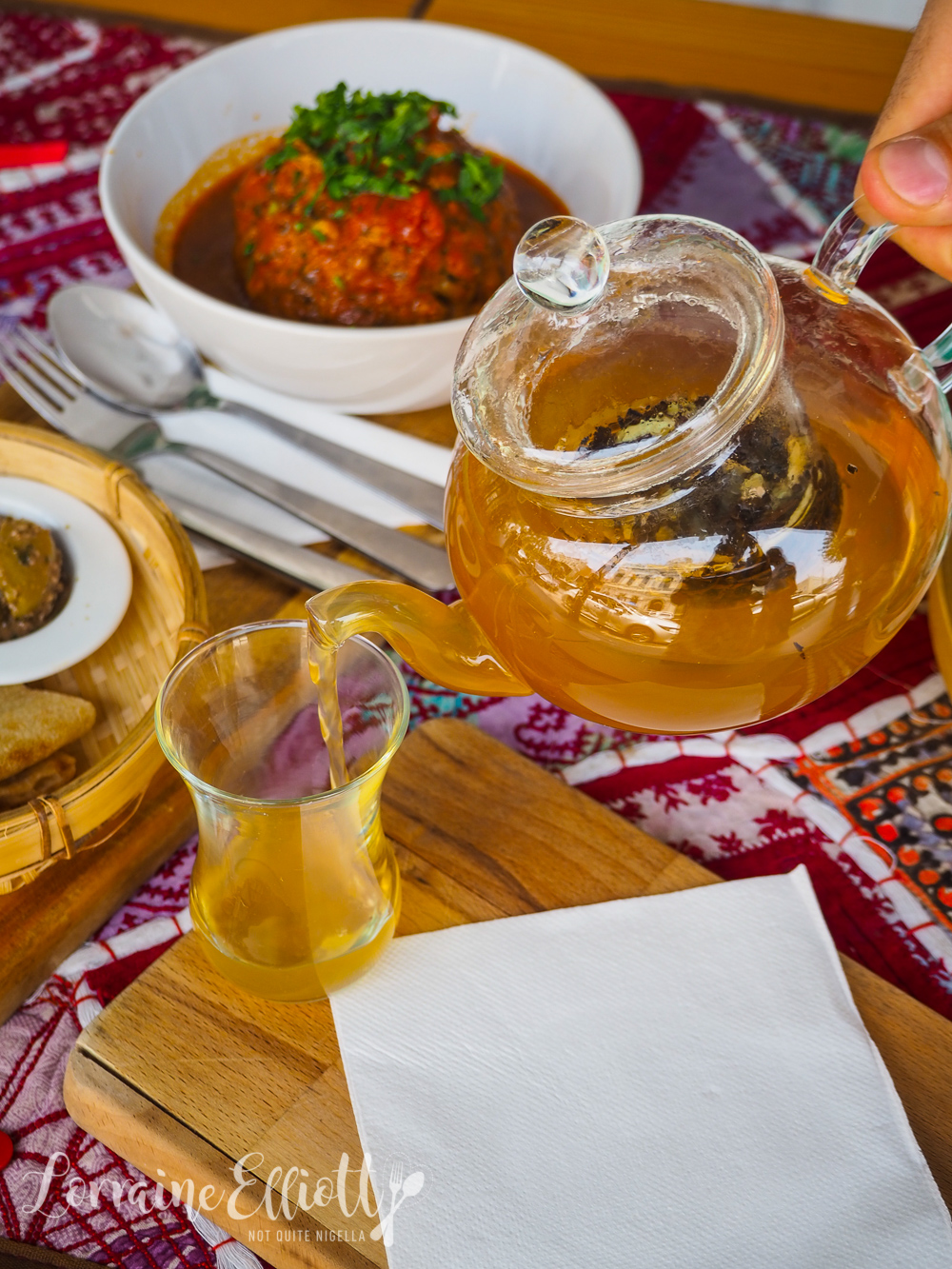 The magic tea is one of their most popular teas and comes in a clear teapot, designed for steeping so that the tea flavour develops. It' a Persian black tea with honey, ginger and lemon. 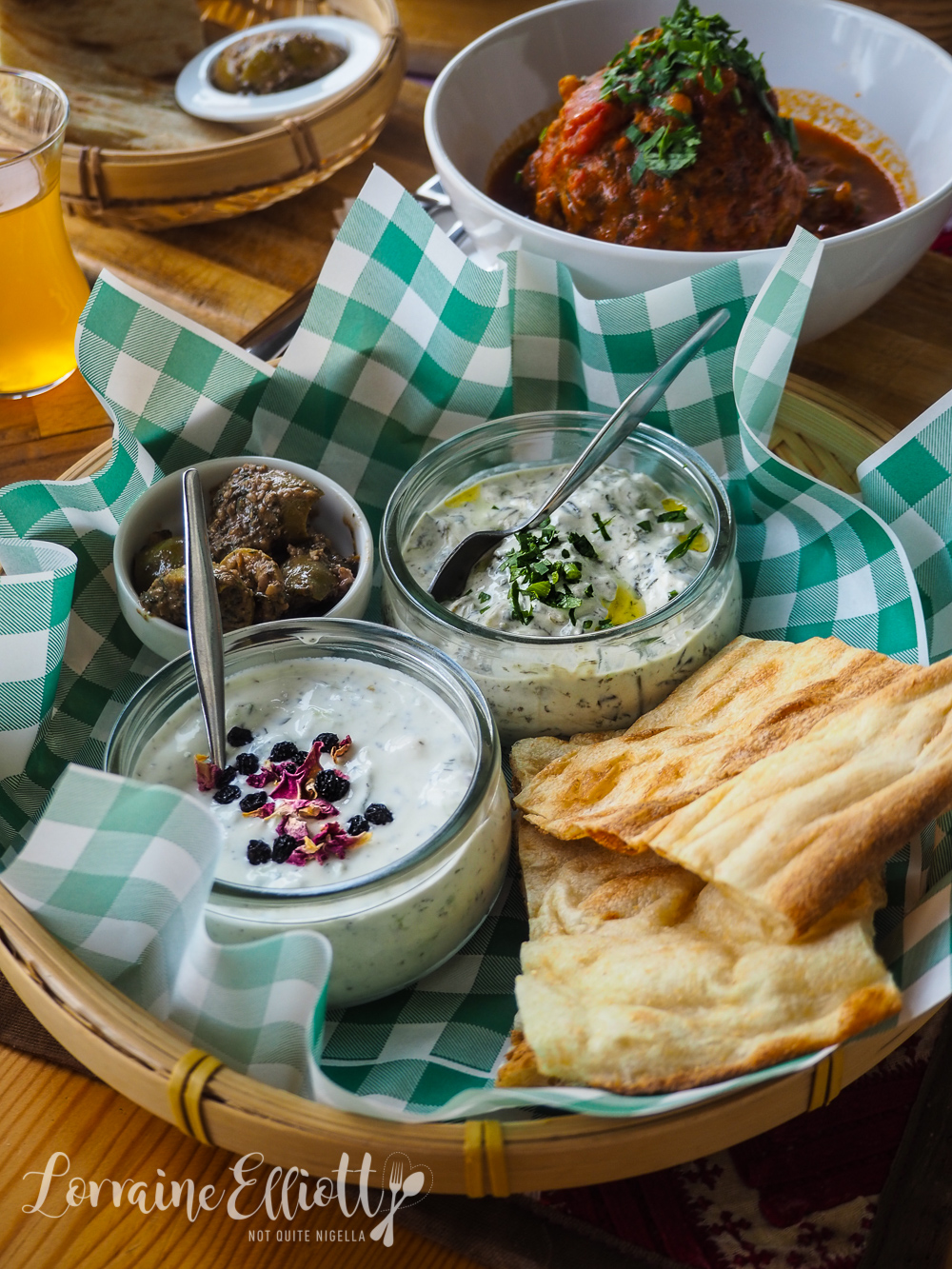 The spring mezze basket has squares of Afghan bread, marinated Caspian olives, a fabulous spinach dip and a tangy Persian tzatziki dip. The spinach dip is given body by the spinach as well as caramelised onions and is flavoured with fenugreek while the Persian tzatziki is sprinkled with currants and rose petals. The Caspian olives are probably the sweetest thing on the savoury menu and he makes these using walnuts and pomegranate molasses. The pomegranate molasses in Iran is less sweet than the one here. 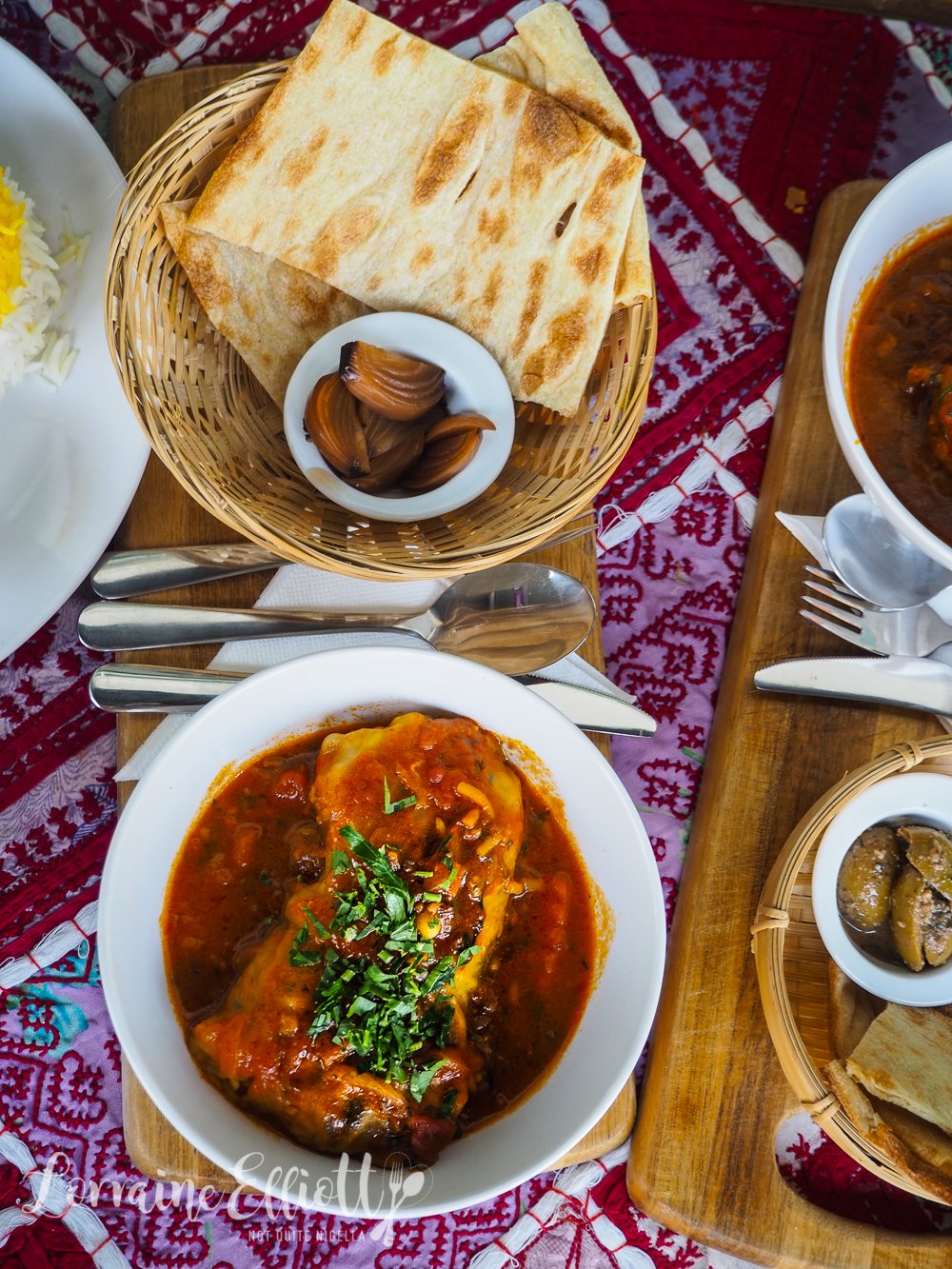 Mr NQN loves the dolmeh, a cabbage wrapped parcel of saffron and split pea rice and herbs that is slow cooked in a traditional tomato sauce with Afghan bread and onion pickles. It's a vegan dish but full in flavour. 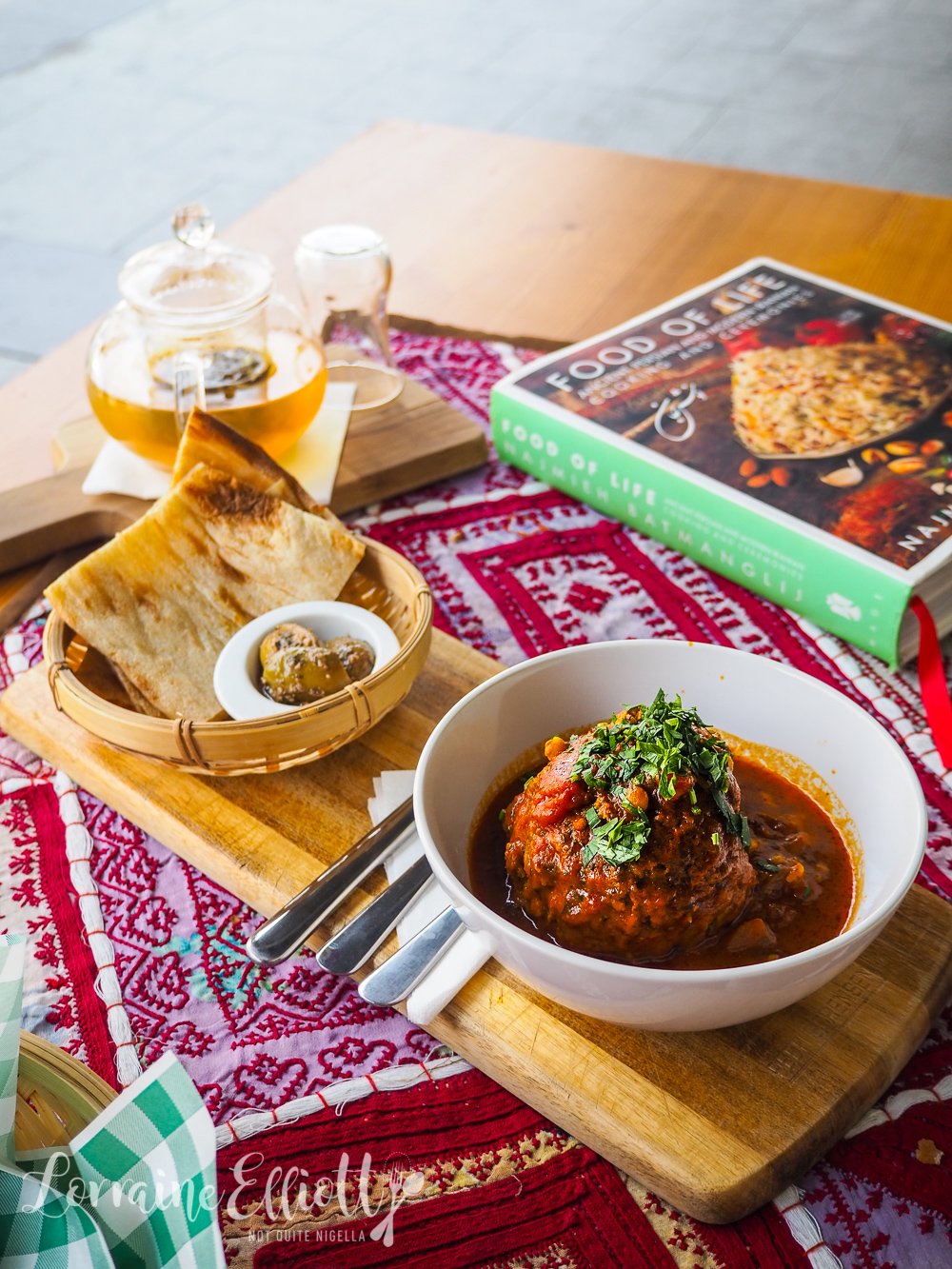 As for me, I'm firmly smitten by the Persian meatball. This enormous meatball is made of split peas, rice, minced beef and herbs but holds a surprise inside of dried plums and apricots. 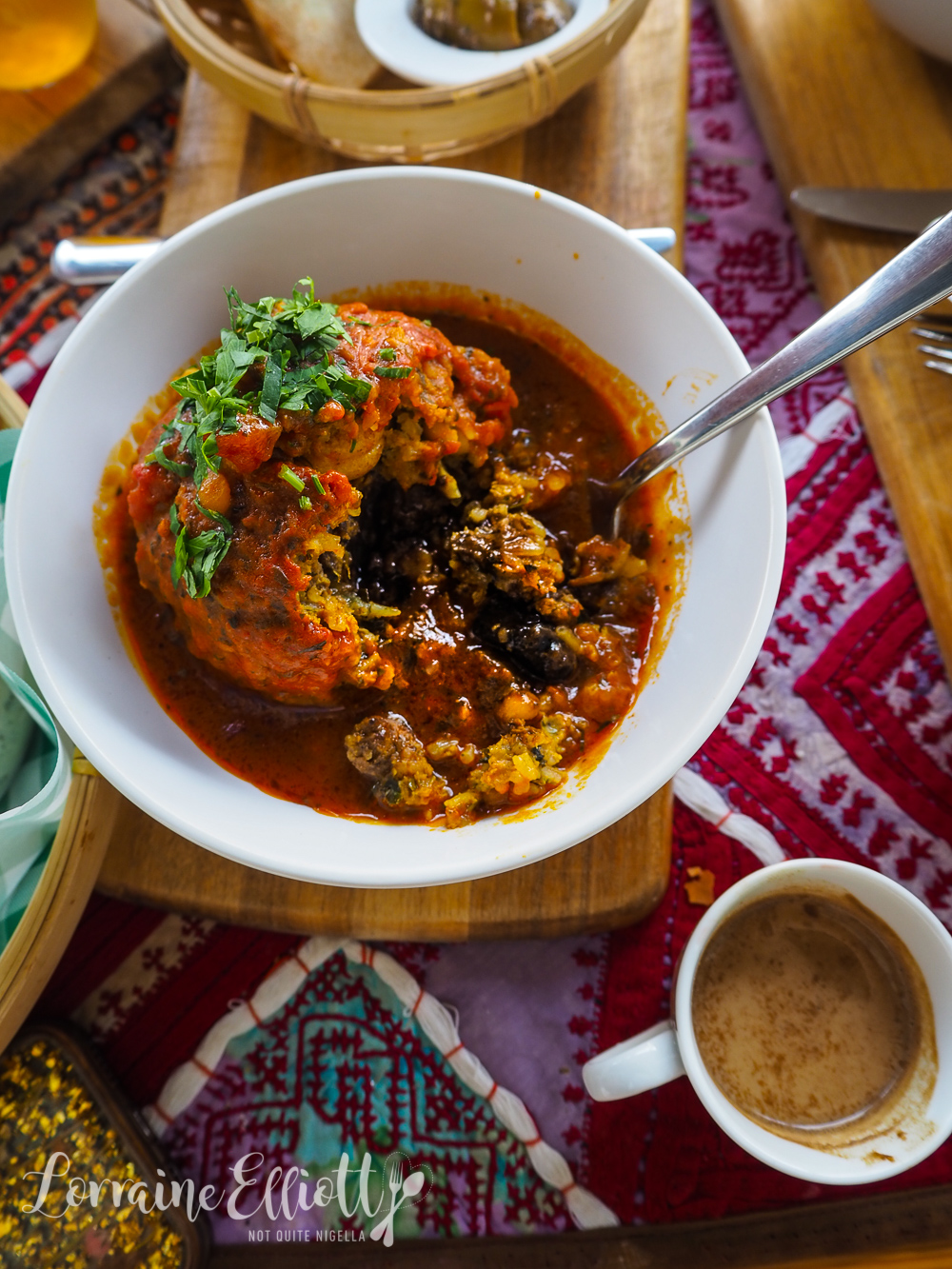 It sits in a bed of tomato sauce and comes with a side of Caspian olives and Afghan bread. I love the meatball mixed with some of the spinach dip and that lovely saffron hued Persian rice. In some regions pf Iran it is considered a skill to make as large a meatball as possible and some are as big as a whole pot. Saba says, "Its a skill to show off if you can make it bigger than anyone else and it's not easy." 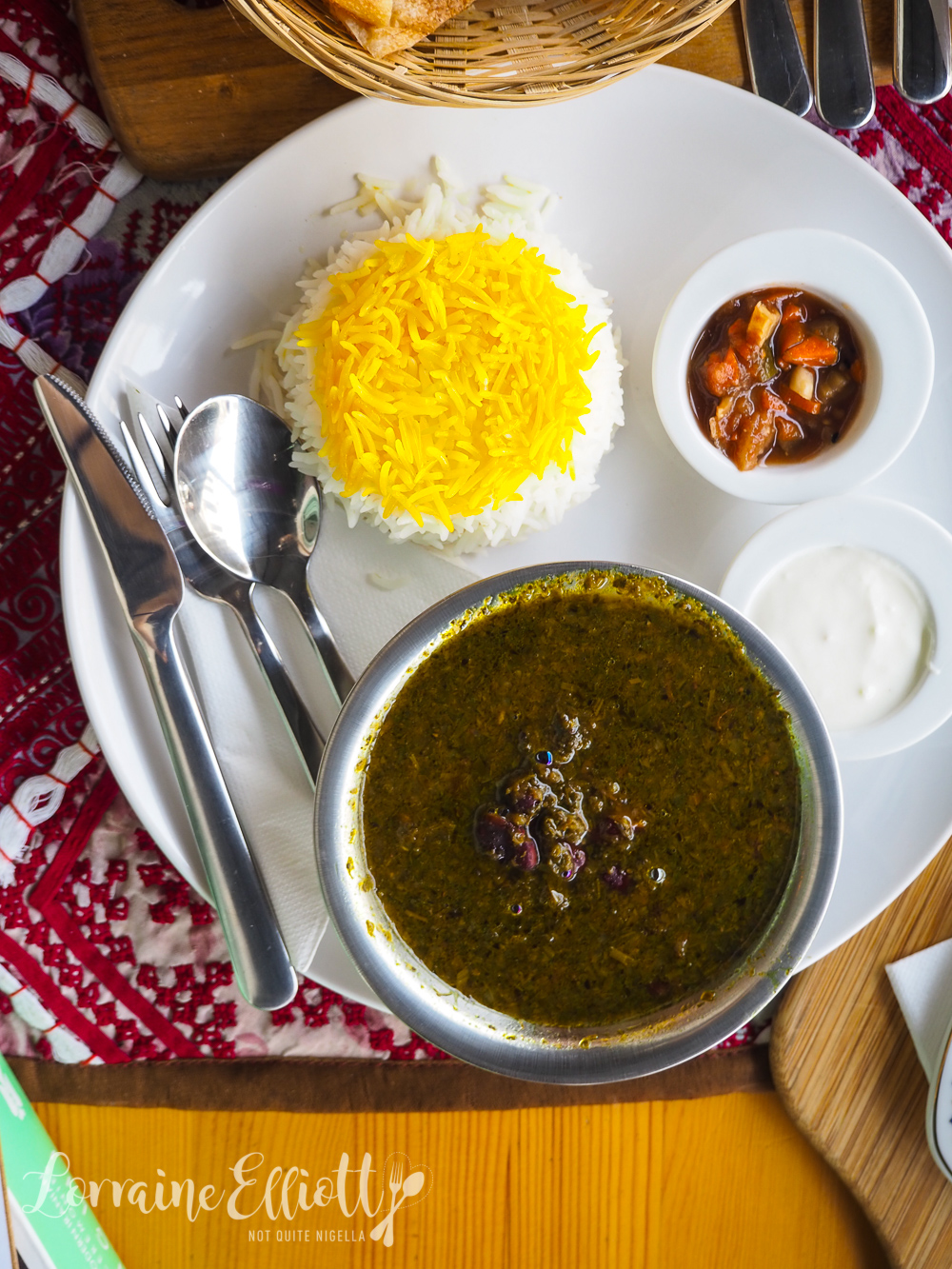 "Persian cuisine has almost unlimited variety of stews which are served with Persian style rice," says Saba. Mr NQN makes fast work of the Persian stew made with beef, herbs, kidney beans, turmeric and limu omani or dried limes. These limes give the stew its strong tangy flavour. It comes with a little pot of port pickle and a shallot yogurt dip with very finely diced shallots in it. The port pickle has a very slight sweetness to it from the tomato juice, vinegar and spices. The pickles get their name from the area in south of Iran where they are made. It faces the Persian Golf where there are many shipping ports. 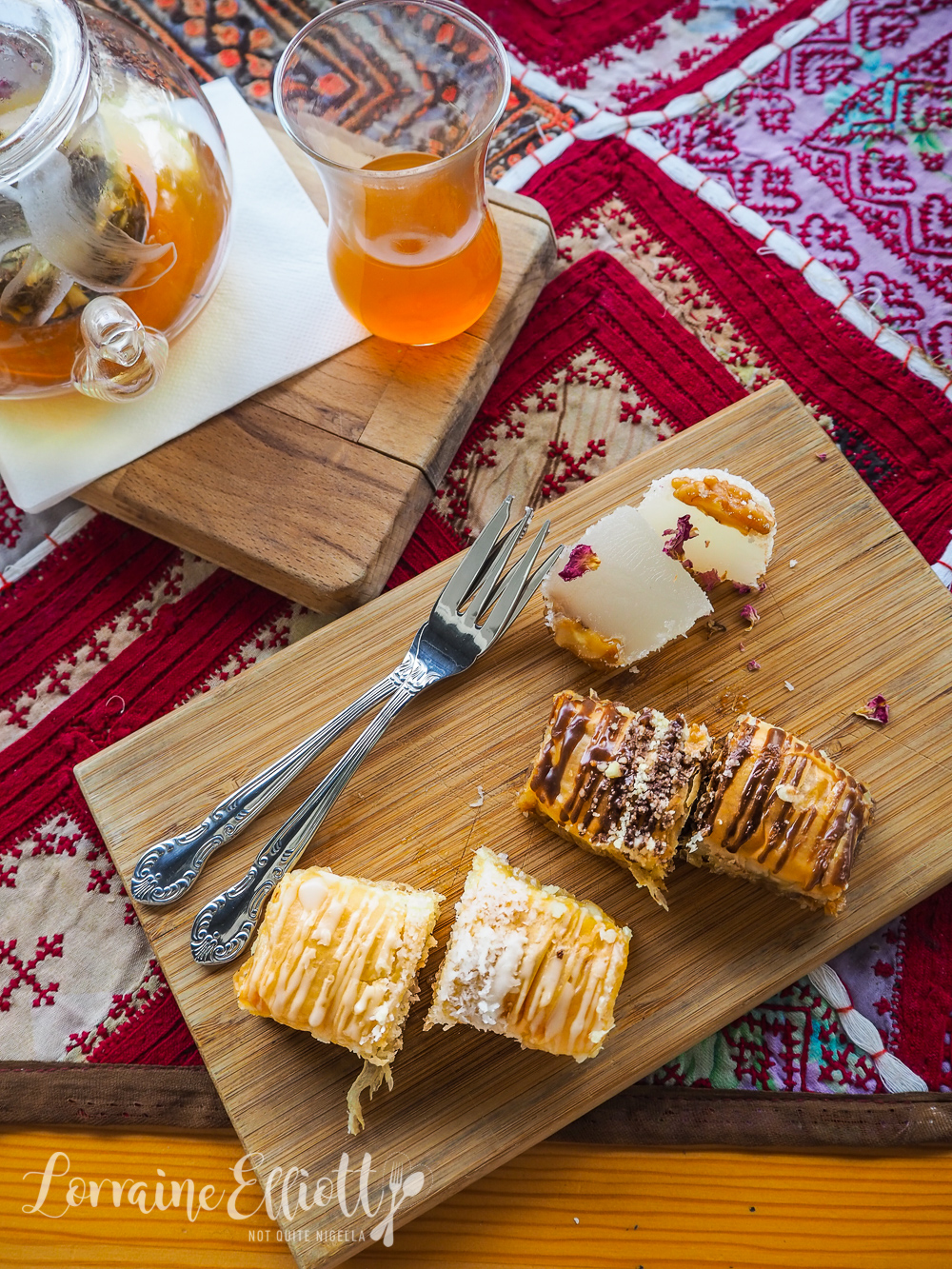 Having already lusted over the sweets display we are curious to try the baklava. These are made for Shila by a Turkish couple in their home and the baklava is less sweet than others. I love the coconut baklava with a desiccated coconut filling wrapped in syrup soaked pastry. There's also a richer chocolate and walnut baklava too. We also try Persian delight, similar to Turkish delight with its signature chewy texture and sweetness. This has perhaps less rosewater flavour than others. 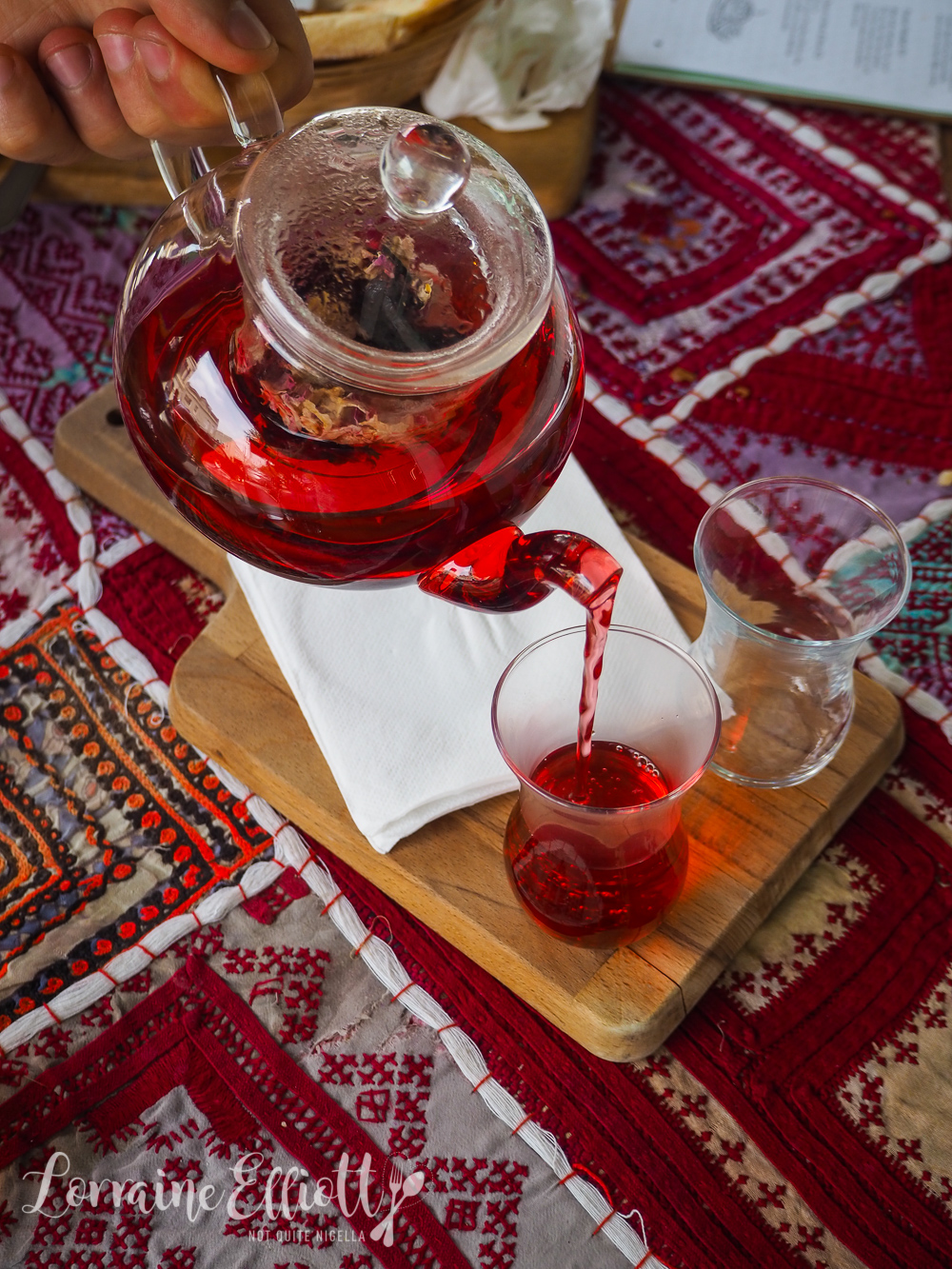 We have this with a pot of Roselle tea flavoured lightly with cinnamon and sweetened with sugar crystals. We let the tea steeps until the colour deepens to a beautiful deep maroon hue. 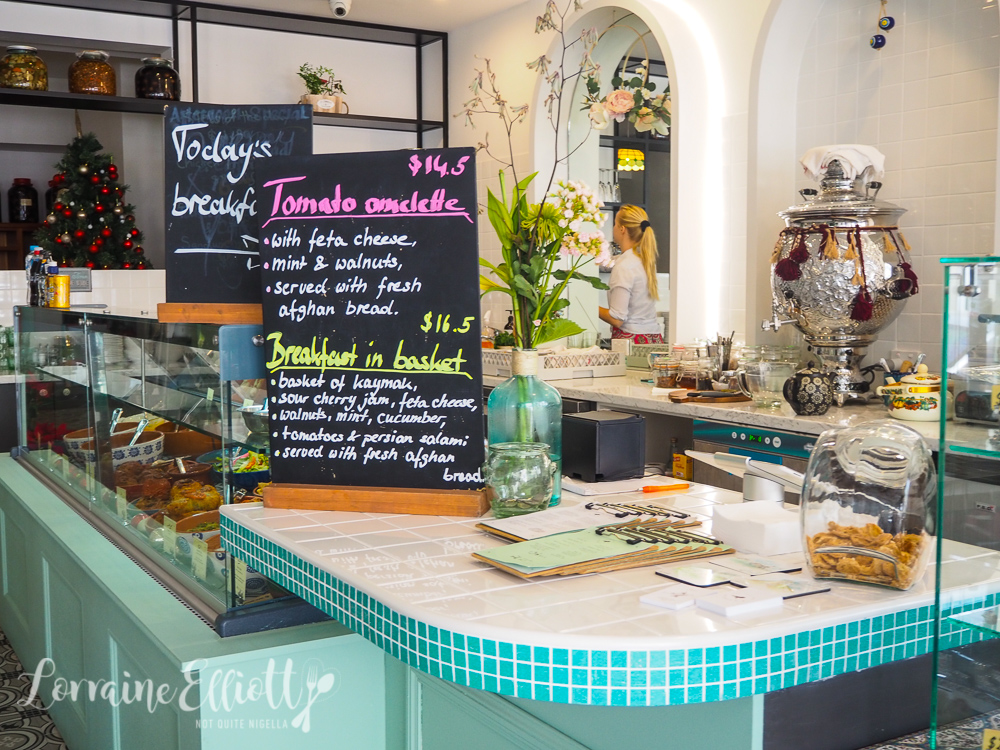 Saba tells us that there are future plans to add grilled kebobs to the menu. He also tells us his plans to make this a deli and points to the enormous jars of garlic. They've been ageing since 2013 and in three year's time they will be ready much like a fine aged whisky.

So tell me Dear Reader, have you tried much Persian cuisine? Do you have a favourite Middle Eastern cuisine?