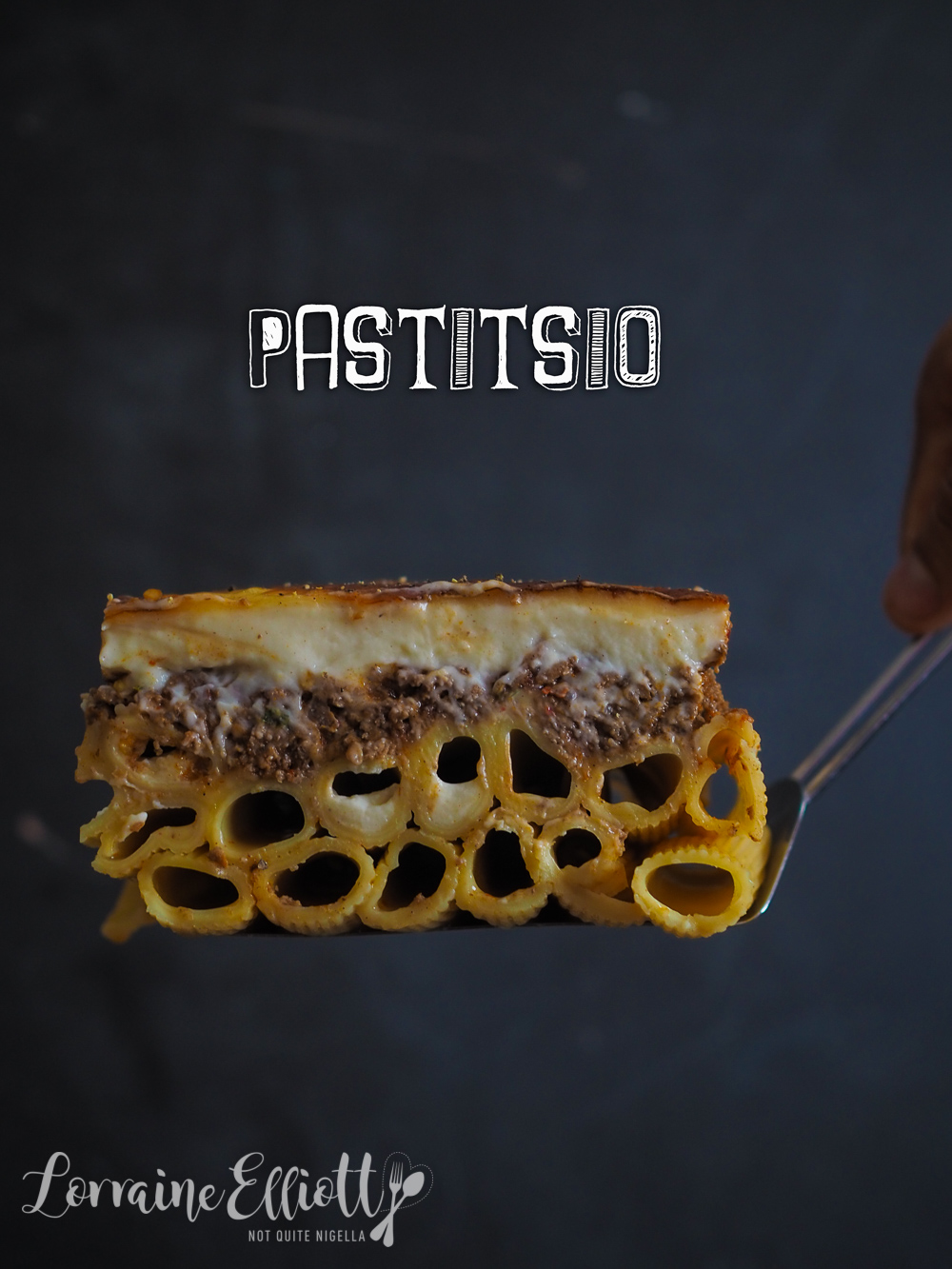 As we move into Autumn and cooler weather what better comfort food than pastitsio! This glorious Greek pasta dish is often dubbed "Greek lasagna" for its layers of pasta, seasoned saucy mince and creamy bechamel sauce. It serves plenty and is pure comfort food. This is a pushy recipe Dear Reader!

The word Pastitsio actually comes from the Italian word Pasticcio which is a baked pie. It is not only a Greek and Italian food but is also found in Cypriot, Egyptian and Maltese cuisines. It comes from "pastiche" and is often described as a "mess". Originally pastitsio would include offal like brains or liver but nowadays mince is used whether it be pork, beef or lamb.

Ironically the word lasagna is said to derive from the Greek word Laganon. I'm not trying to start a debate about who invented what - with two of my closest friends being Greek (Valentina) and Italian (Monica) that would be silly. What I guess I'm trying to say is that there is a lot of overlap and they're both delicious cuisines!

For the lovely layered effect the size of your tin matters. You want the tallest baking dish that you have but you want it no larger than 22x33x10cms or 9x13x4 inches. You can still get a delicious looking pastitsio but you obviously won't get the height. But did I mention that it will still be delicious which is the most important thing! ;) 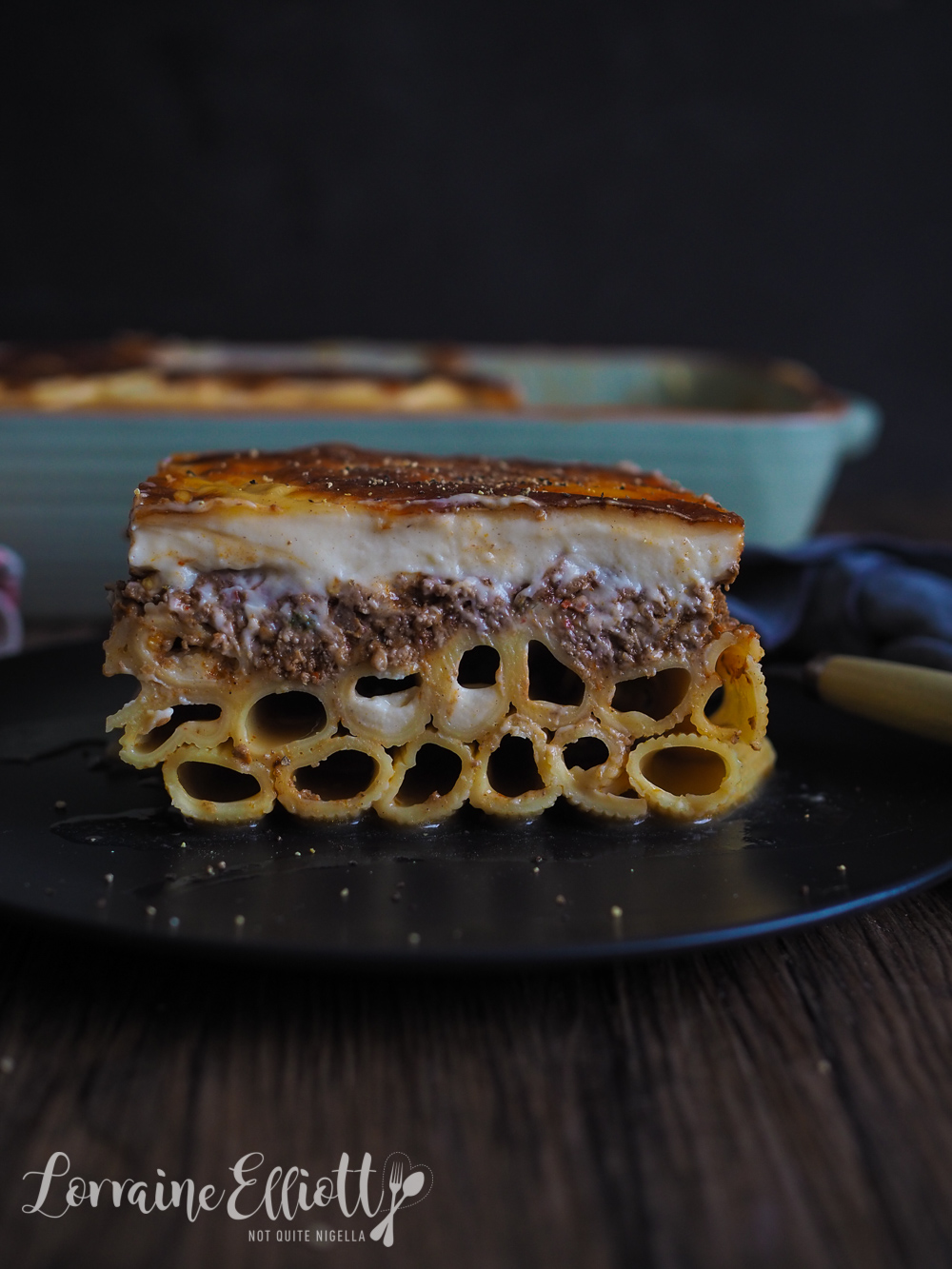 1 - Which mince to use in pastitsio? Try pork, beef or lamb. Whatever you prefer really.

2 - You can make the mince ahead of time, even a couple of days ahead of time is fine. I would suggest making the bechamel on the day and the pasta just before you put this together.

3 - Which pasta to use in pastitsio? Ziti? Bucatini? Penne? Rigatoni? Tubular pasta is used in pastitsio. I got so confused but in the end I used rigatoni No. 89.

5 - The beaten egg helps to bind the pasta layer together when baking it in layers.

6 - You can top pastitsio with kefalotyri cheese, a firm goat's milk cheese or halloumi. I added half mozzarella to the topping.

7 - Like lasagna, if you want to get a clean cut, you need to rest the pastitsio once it is baked and out of the oven. For the cleanest cut, refrigerate the pastitsio overnight.

Speaking of refrigeration, I actually made two pastitsios. The reason why I made two is that I made my first one late one afternoon. It was getting too late to photograph it and I wanted to get a clean "cut" photo. I usually get ready for bed earlier than Mr NQN so I told him to put away the pastitsio in the fridge before he went to bed as it was still too warm to put it in the fridge. I covered it and cleared out a big spot in the fridge for it. 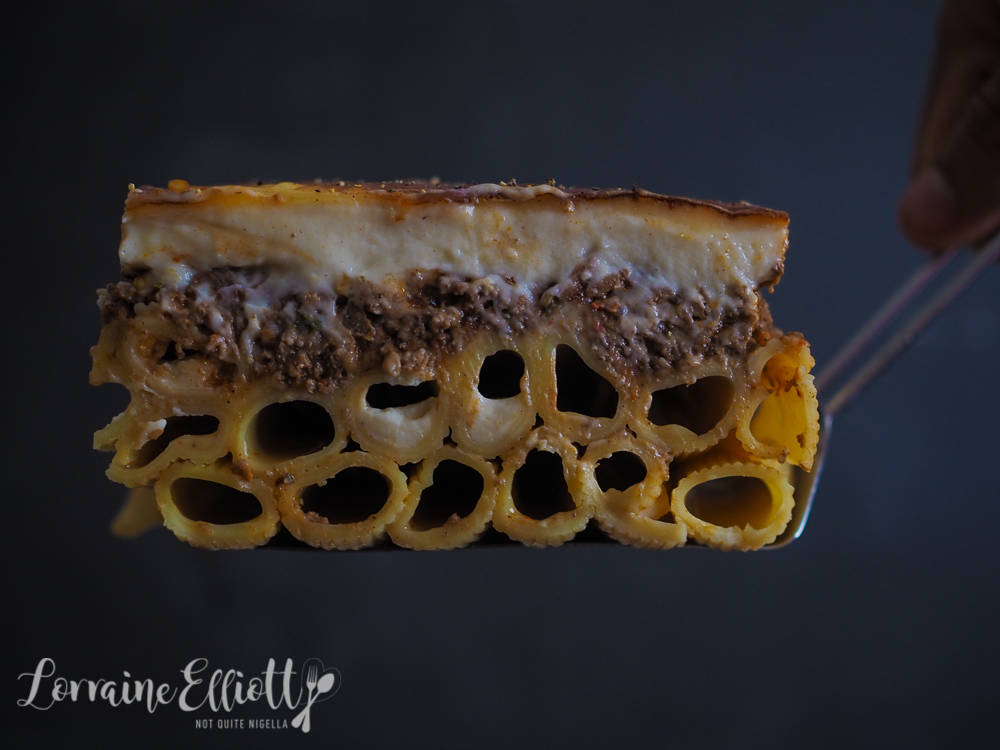 The next morning I woke up and saw the pastitsio still sitting on the counter. "Honey! You didn't put this away last night? What happened?" I said alarmed. It was meant to be dinner for quite a few nights and it was also a bit of effort. Also I really, really wanted to eat it!

"I thought you asked me to cover it," he said confused.

"What? But it's already covered! It has been covered all along!" I said. I never quite got to the bottom of his logic, he sort of slunk away guiltily and was on his best behaviour for the rest of the day. And that's how I ended up making two pastitsios!

So tell me Dear Reader, do you leave your food to cool completely before you put it in the fridge? Do you like pastitsio? 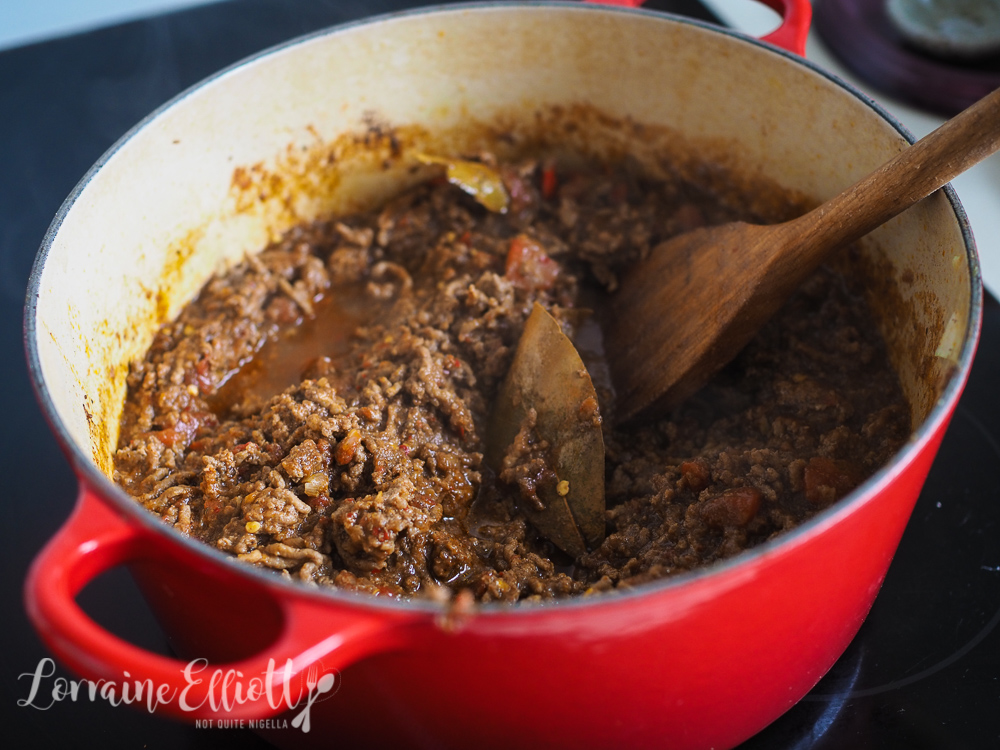 Step 1 - First make the mince. Heat oil in a large pot and add the onions and garlic and saute on medium heat until softened. Add the beef mince making sure to break it up with a spatula (I sometimes use a potato masher too). Then add the tomato paste, tinned tomatoes, olives, bay leaves, stock cubes, chilli flakes, fennel seeds, smoked paprika, cinnamon, nutmeg and clove. Simmer until the beef is cooked through and the sauce has thickened and become darker red in colour, around 15-20 minutes or so. Add parsley and stir through. At this stage you can cool it completely or use it.

Step 2 - Make the bechamel sauce. I love doing this in my Thermomix but you can also do it on the stovetop. In a large saucepan add the butter and melt. Add in the flour and stir together to form a paste and cook on medium heat for 30 seconds or so. Then gradually add the milk in 6 or so lots whisking it in. Switch to a spatula to thicken it and to make sure that it doesn't catch on the base of the pot. Add the cheese, salt and nutmeg and allow to cool-it will thicken further upon cooling.

Thermomix directions: add the butter, flour, milk, parmesan, salt and nutmeg in the bowl and set to 10 minutes, 90C speed #4. 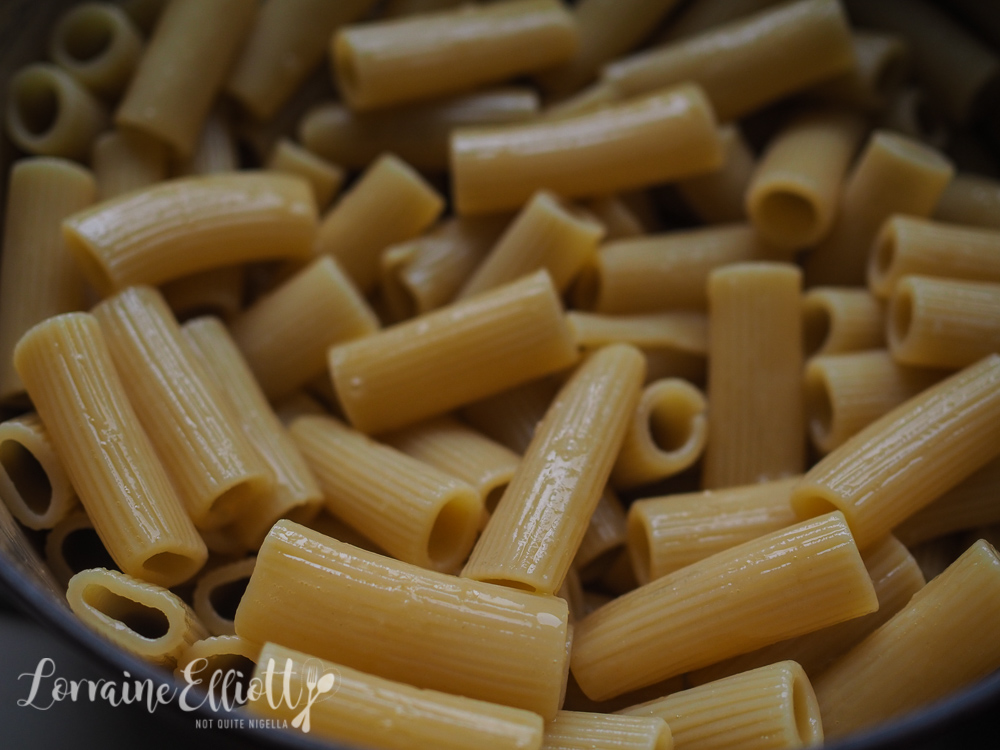 Step 3 - To make the pasta layer, boil pasta in a big pot of boiling water for 5 minutes so that it is al dente (it will also cook in the oven). Then drain under cold water well. Then whisk the eggs and gently toss the pasta in the beaten egg. 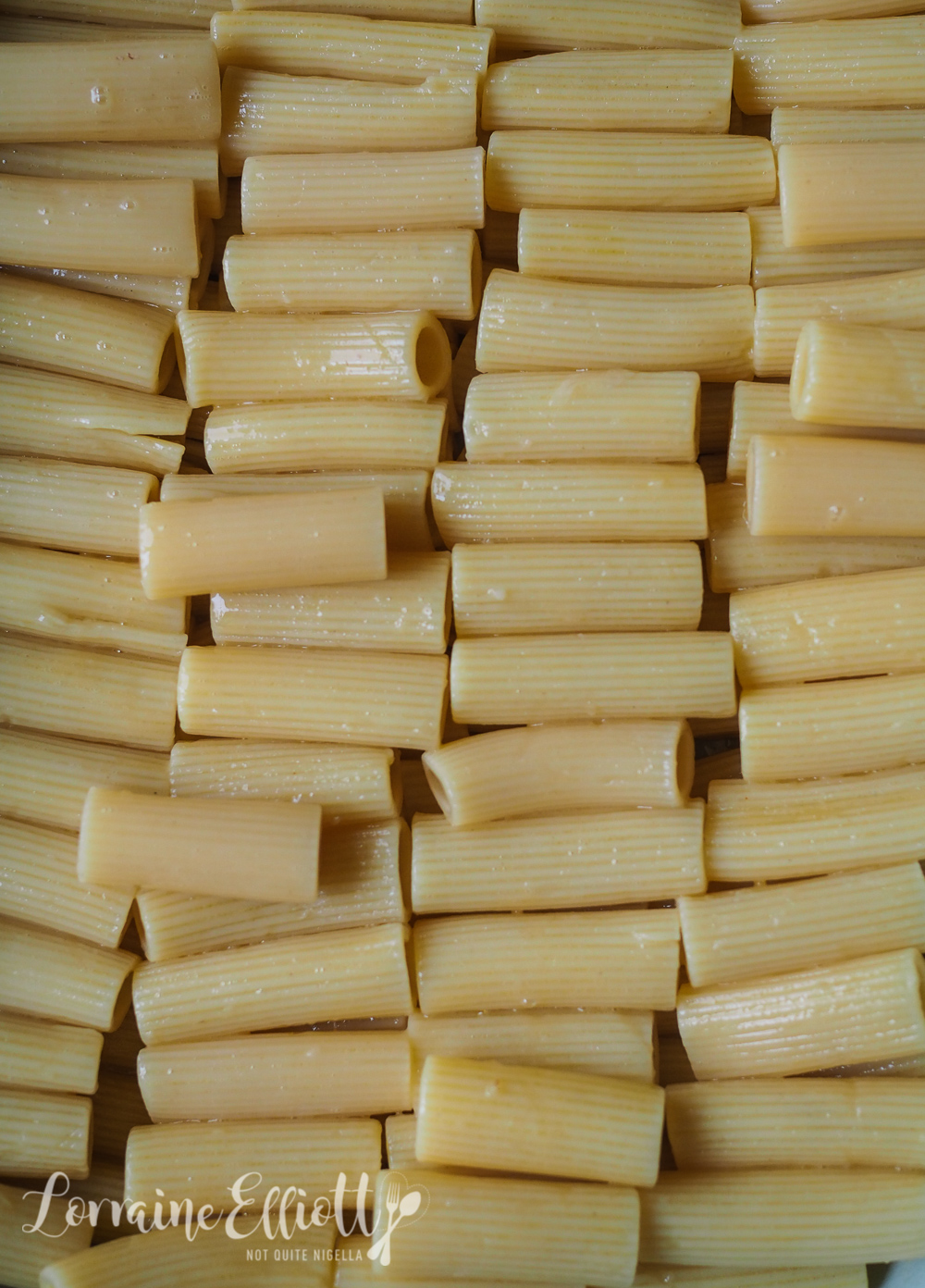 Step 4 - Preheat oven to 180C/350F. Spray a 22x33x10cms or 9x13x4 inch baking dish well with oil spray. Place the pasta and egg layer on the base. I lined them up which actually isn't that annoyingly painful. I made two layers of rigatoni tubes. 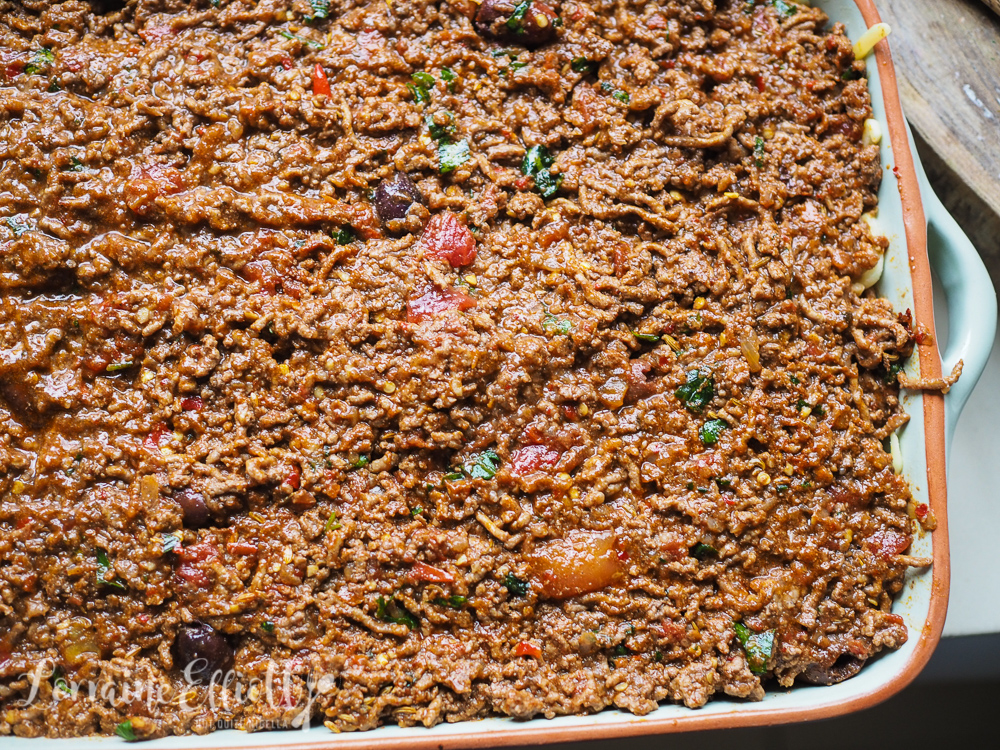 Step 5 - Top half of the kefalotyri and mozzarella and then add the mince layer. Then add the bechamel and then the remaining half of kefalotyri and mozzarella. Bake for 45 minutes or until the cheese on top is blistered. Rest this for at least 1 hour to get a clean cut (I rest it overnight which allows for a very clean cut). But then again you read what happened the first time I made this and left this to cool... 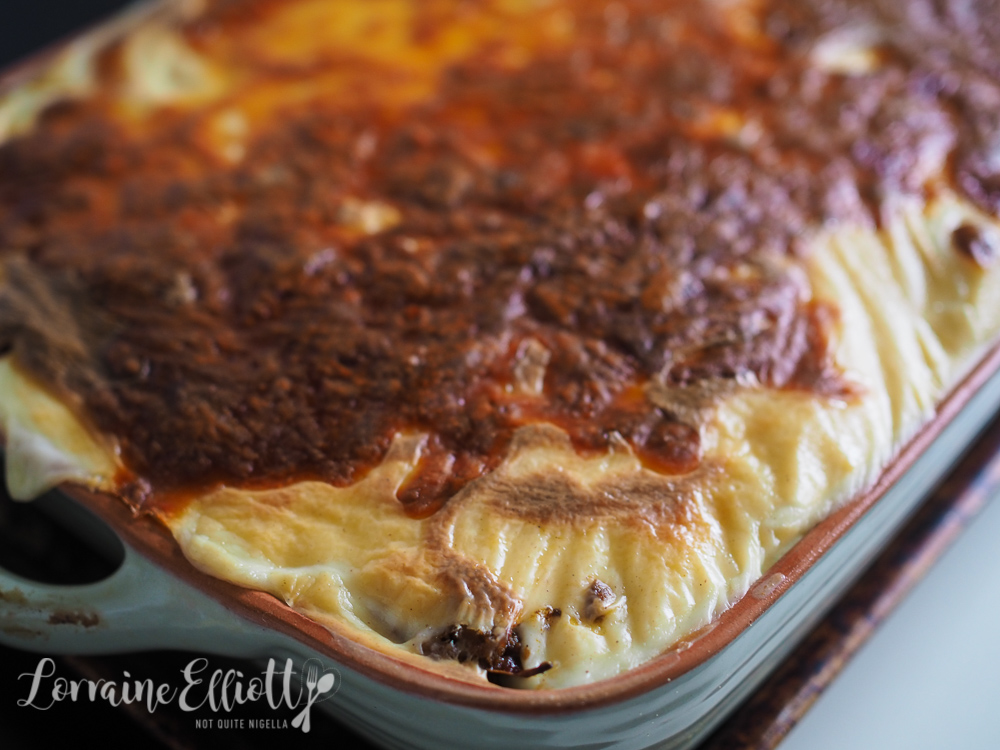 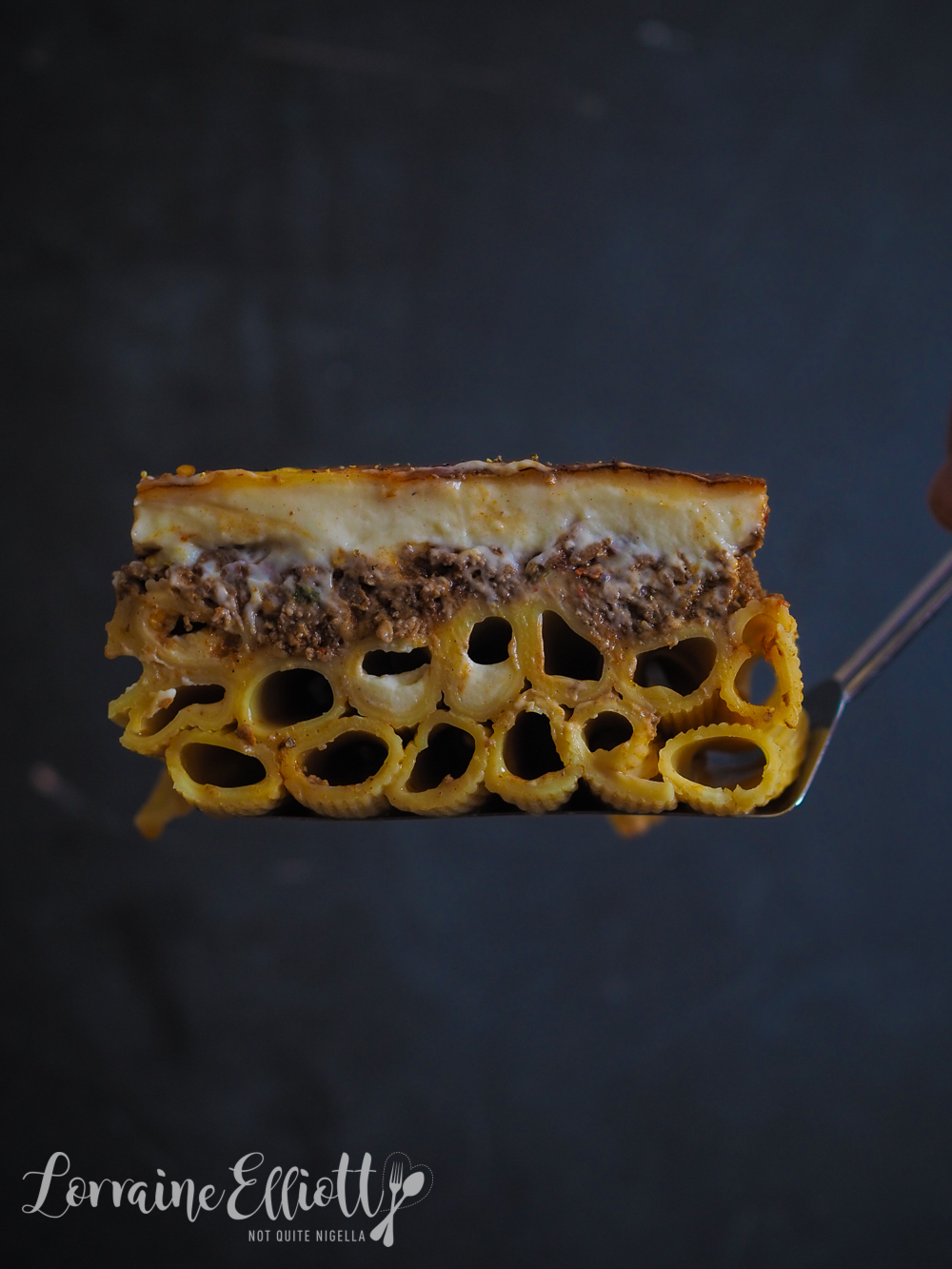