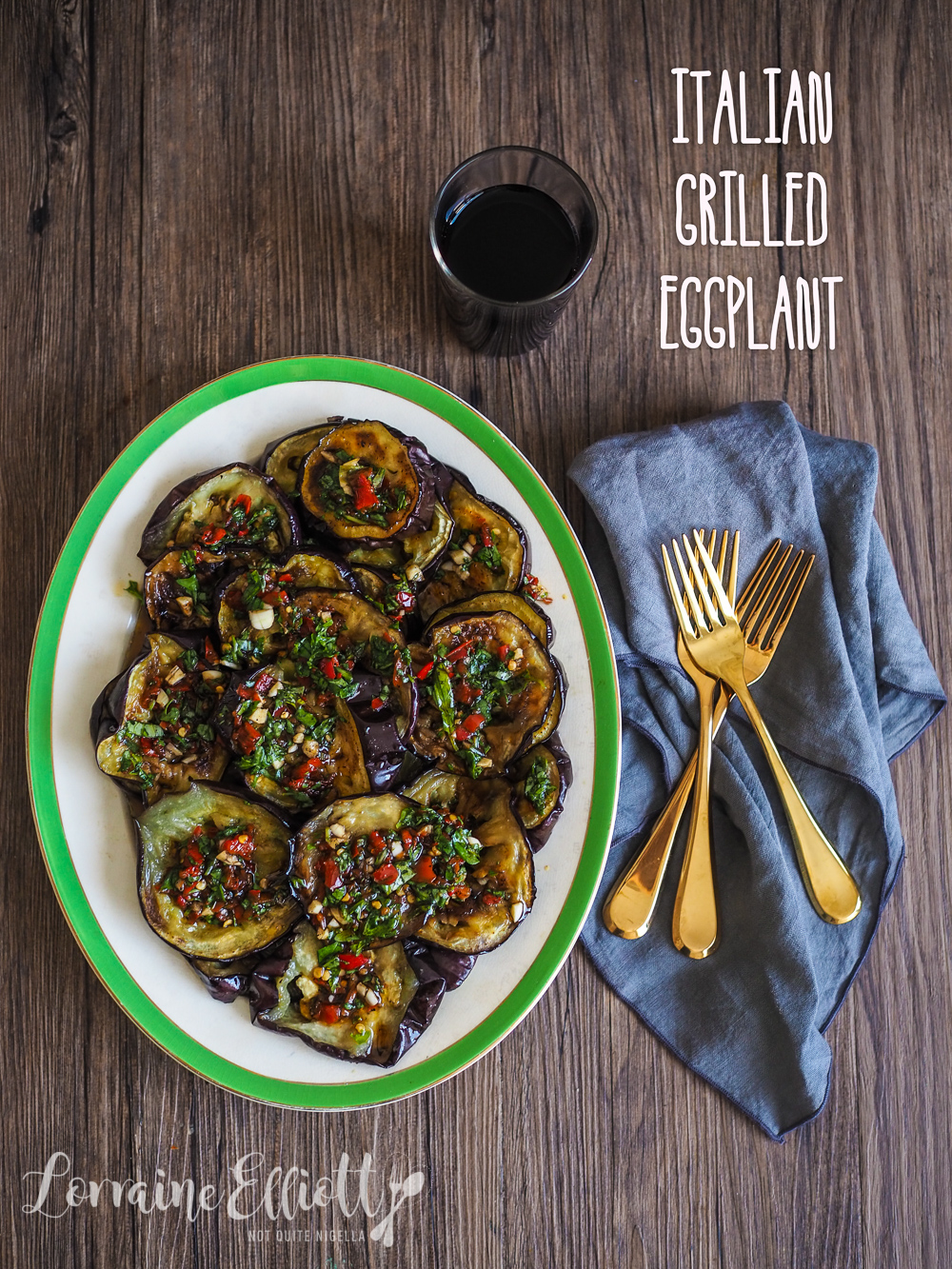 Eggplant or aubergine is plentiful at the moment and this is seriously the tastiest way to serve grilled eggplant and so easy too! This Italian grilled eggplant has a simple but lusciously tasty herb, garlic, olive oil and sherry vinegar topping. It is also vegan too! This is a pushy recipe Dear Reader!

I cannot tell you how addictive this eggplant dish is. It's so much more than a sum of its parts. The sweet sherry vinegar really makes this so utterly moreish along with the Calabrian chillies and I could not stop eating it. I loved it by itself but once the eggplant was finished I mopped up that delicious sauce with crusty bread. It can be served hot or cold so it is a perfect dish to serve to guests as it can be made 2-3 days ahead of time. I really hope that you'll give this a go!

Don't have sherry vinegar? You can also use a sweet vinegar like a cherry or raspberry vinegar. It's worth buying a bottle (it's easy to get) because it is very versatile and I'm betting if you make this once, you'll want to make it again. This sauce would work on so many different grilled vegetables too like zucchini, capsicum, mushrooms or asparagus. 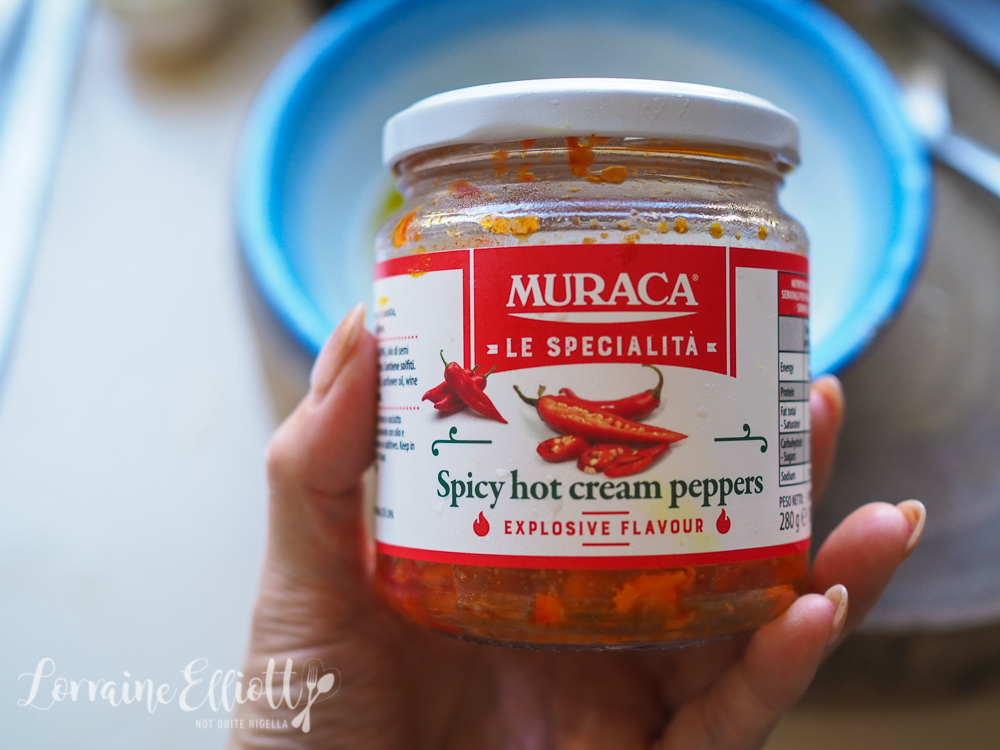 Calabrian Chillies: my latest addiction Monica got me onto this brand of Calabrian chillies called Muraca Spicy Hot Cream Peppers and I became instantly addicted. They're spicy red chillies in oil with salt and a little vinegar and if you like chilli, you will adore these. I went through the jar so quickly. It is also amazing on pizzas in place of chilli oil (because sometimes the chilli oil they give you at pizza restaurants isn't very spicy). You can buy it online or at Two Providores or Harris Farm (not sponsored, I just love it). Once I got through this jar I ended up buying the 1kg jar. It's also great mixed with mascarpone for a delicious, spicy dip.

I ate this Italian grilled eggplant at Monica and Marco's house. Monica just came up with the recipe because she's clever like that. We were there for a games night and they had a new version of Charades called Adults Only Sick & Twisted Charades which is like Cards Against Humanity version of Charades (ie really cringy and inappropriate things to act out so that it's embarrassing). Both of us wanted to team up and beat the guys. We both love watching shows where women get the upper hand. For me I think it comes from going to a progressive all girls school where we'd always try and beat the brother school. 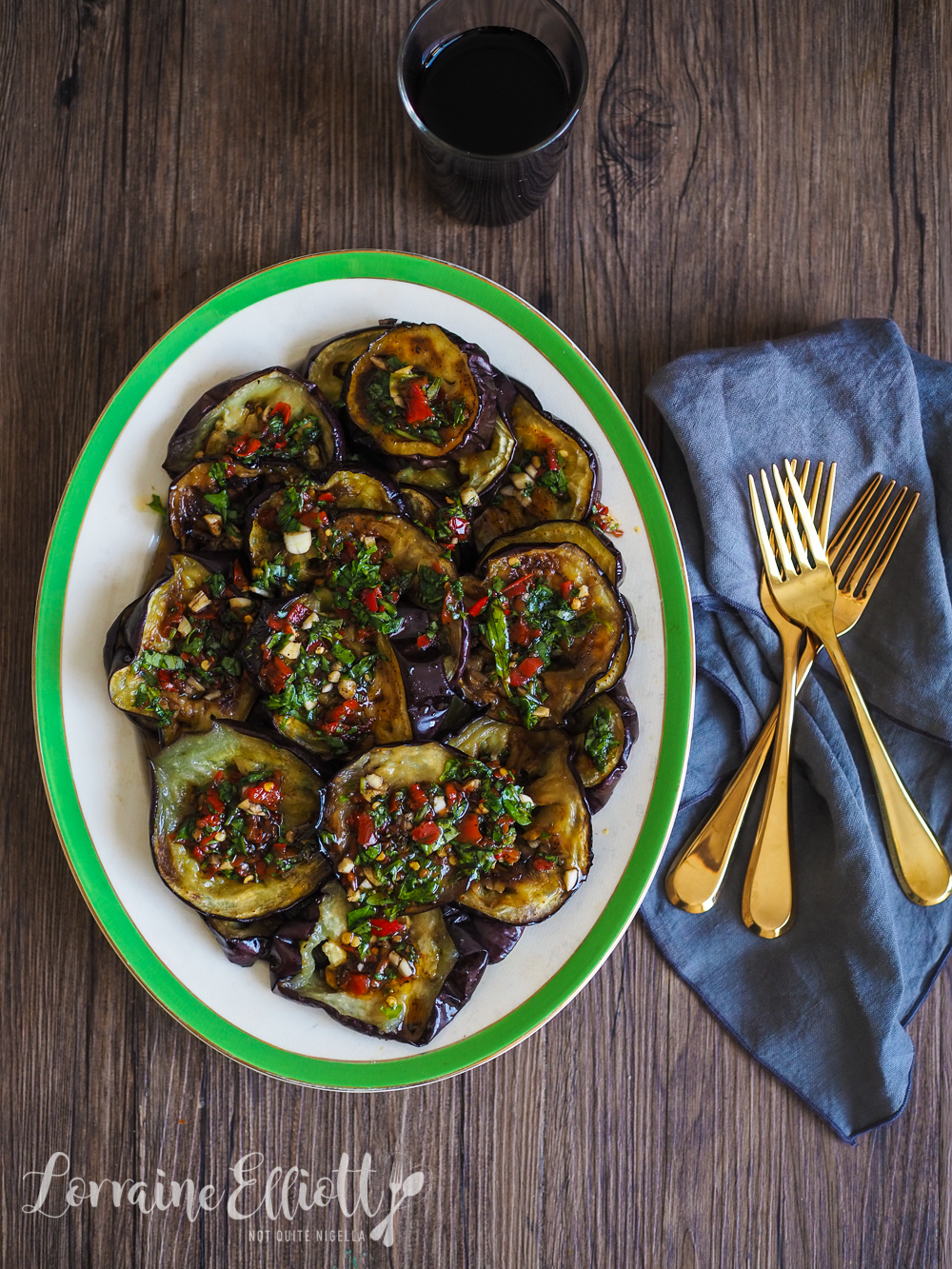 Charades is one of my favourite games and sometimes with my female friends it's like we have a psychic connection like when I play it with Girl Next Door it just takes one gesture before we guess it.

Monica and I are food twins. We are pretty much in agreement about everything food related. However we don't twin in all aspects and do not really have the same taste in television and movies. We wondered what we would be like if we teamed up for charades.

Marco and Mr NQN started off. They were dealt a few rough cards and sort of did ok all things considering. Then Monica and I teamed up and it was so fluid as we guessed quickly. We were like one person acting and guessing and we rapidly racked up win after win.

Mr NQN did get his revenge though. He saw that an upcoming card said "Stool sample" and knowing of my aversion to bodily functions of that sort he placed it on the top of the pile so that I would have to act it out. Which I did (and surprisingly Monica guessed quickly!). We had to abandon the game as it was clear that the boys weren't winning and it wasn't so much fun for them any more...

So tell me Dear Reader, are you and your friends twins? Are you good at charades? 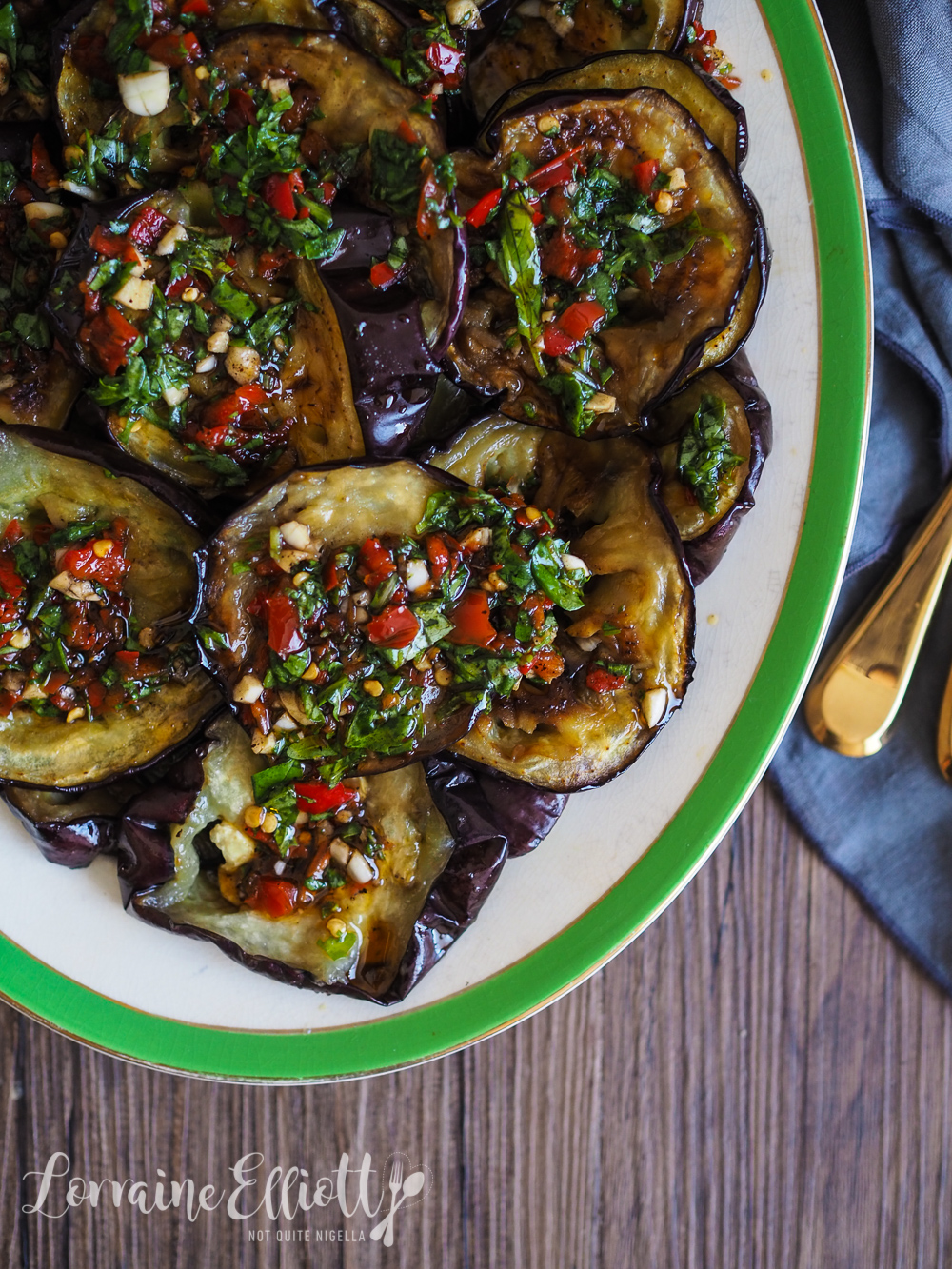 Can be done ahead of time and stored in the fridge

Serves: 4 as a side dish

Step 1 - Mix all sauce ingredients and season very lightly with salt (be careful with the salt as you are salting the eggplants as well). Cover and place in fridge to let the flavours develop. 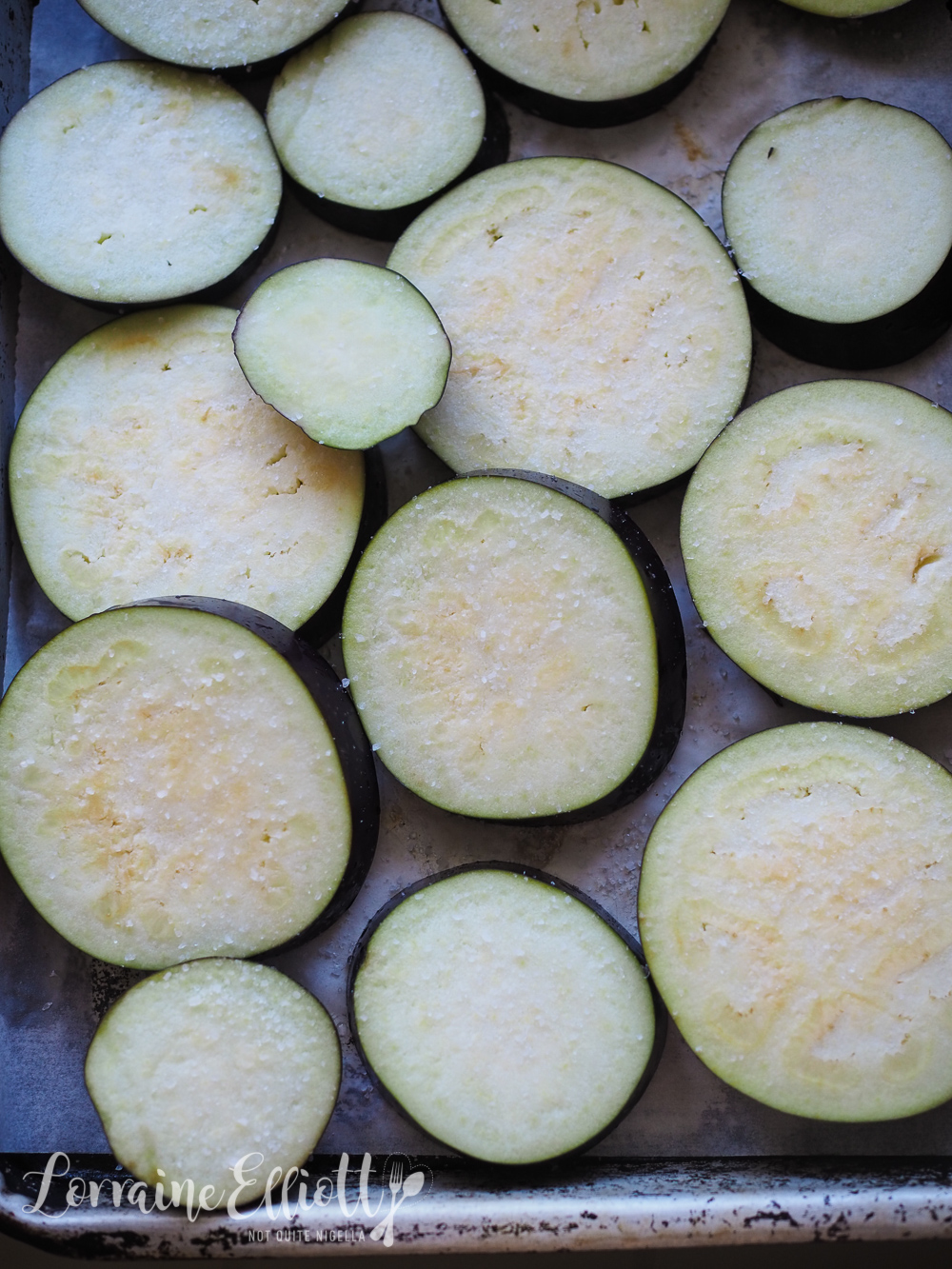 Step 2 - Slice eggplant around 1.5-2cms thick (not too thin) and salt to draw out bitterness. After 15-20 minutes pat all eggplant with paper towels to remove water that has come out. 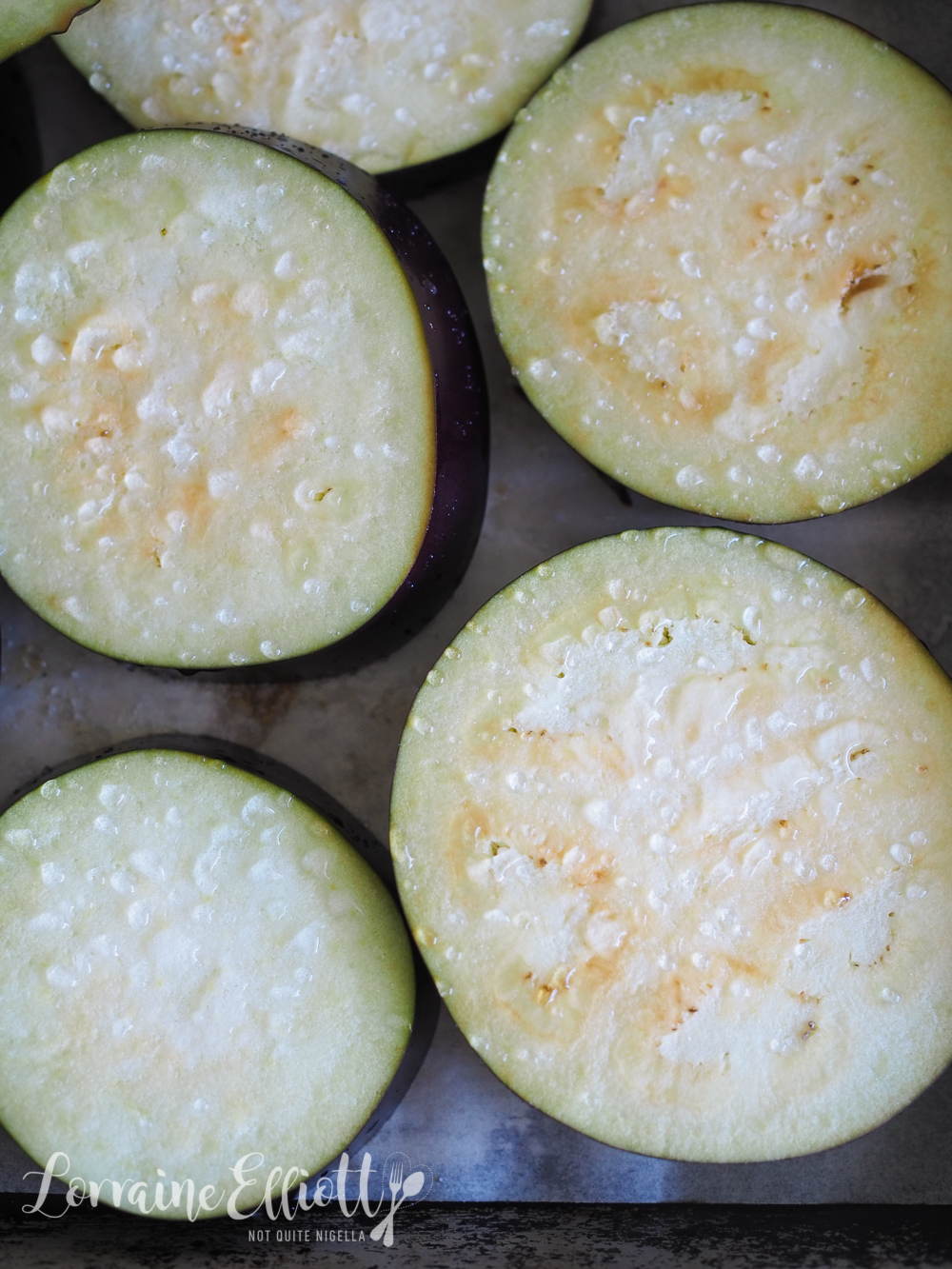 Pat water from the eggplant slices

Step 3 - Heat up oven grill to hottest setting (250C/482F). Lay eggplant on oven tray and brush each eggplant disc with olive oil. When browned on one side, flip and brush on other side and put back in oven. Repeat until you’ve grilled all the eggplant. Place slices on a serving plate.

Step 3 - Drizzle sauce over eggplant. You can keep it in fridge or serve at room temperature. Will be good for 2/3 days.