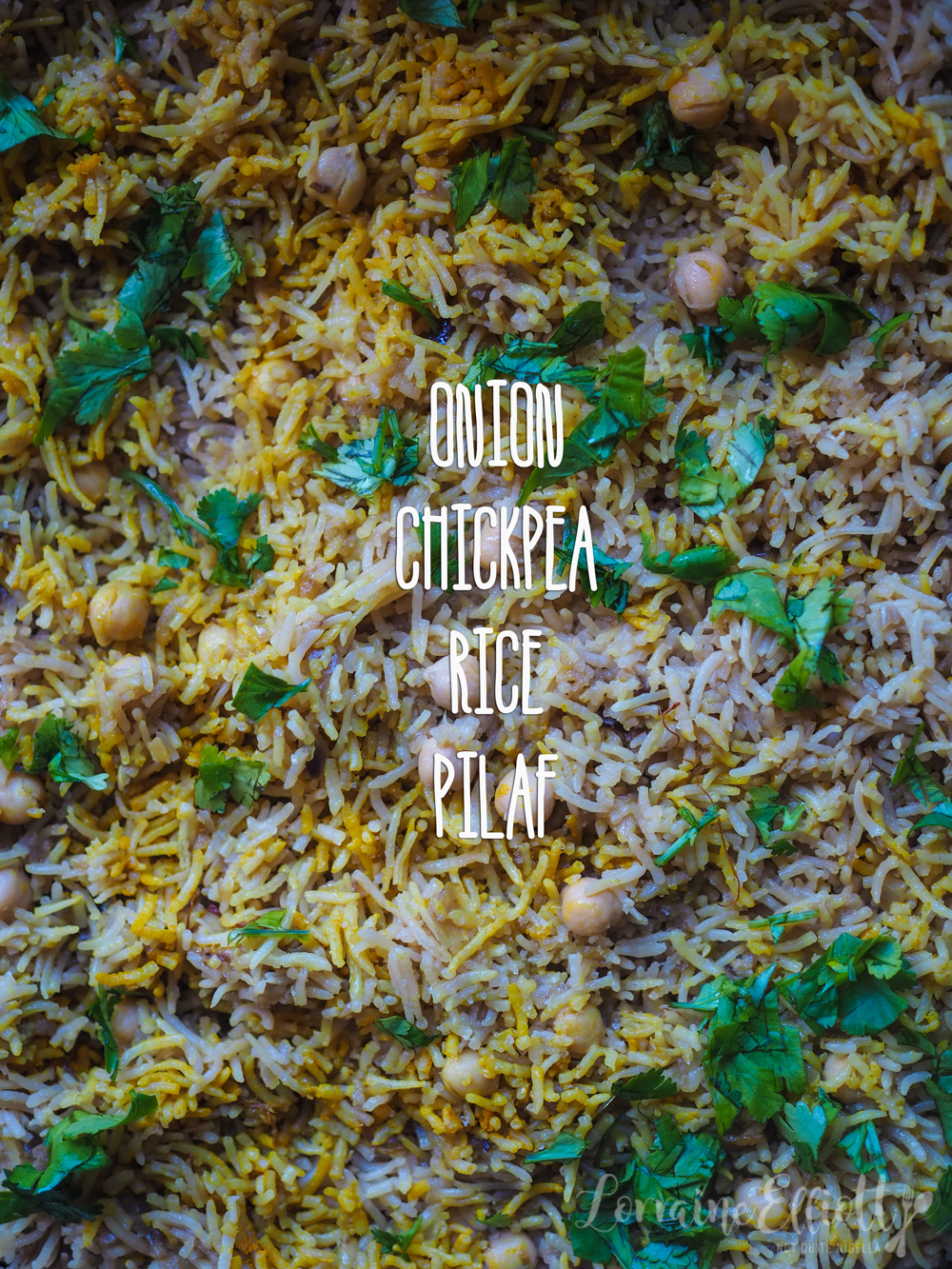 This onion, chickpea and spiced rice pilaf is such a tasty way to make rice that is a great accompaniment to meats or curries or just a tasty meal in itself. Basmati rice is sweetened with caramelised onions with a range of fragrant spices and chickpeas. This pilaf rice is beautifully flavoured and doesn't stick together!

A pilaf is a rice dish where rice is cooked with stock to flavour it and it can have other ingredients and spices added to it to round out the flavour. Pilaf rice should not stick together and the grains should be nice and separated. It is said to originally come from Persia and the Middle East although it is seen in many countries.

The key to a great pilaf is making sure that the rice doesn't stick together. To achieve this you need to use the correct type of rice. Basmati rice is ideal for this as well as other Persian long grain varieties of rice like Domsiah. Also make sure to rinse your rice well of the starches that help it stick together. I rinsed this basmati rice six times with warm water until it ran completely clear.

Other options: add nuts or currants to your pilaf. You can also add 1 teaspoon ground cumin for a "meaty" flavour or your favourite spice mix.

Don't throw away that chickpea tin water: use it to make meringues, dips and cake frosting in place of egg whites!

Pair this pilaf with meats, stews and curries! It goes with everything! :) 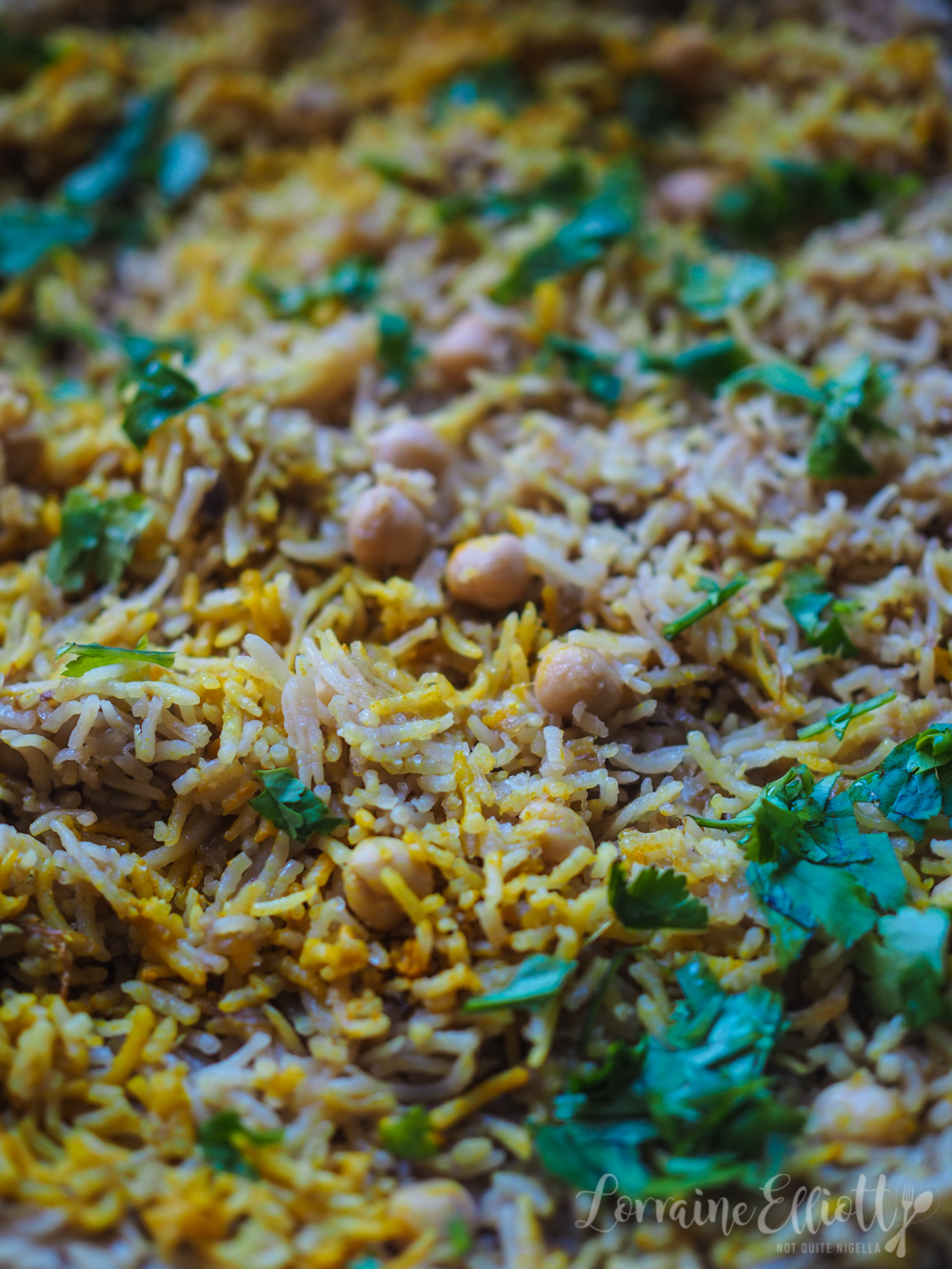 This pilaf was an accidental recipe that I made up for lunch at the Asylum Seekers Resource Centre. We've had a long hiatus for cooking for the clients (the asylum seekers) because of COVID-19 and we recently returned to lunch duty where we prepare and serve lunch to them. Although we were told that there would be around 25 clients, there was a small crowd of less than a dozen clients and we ended up feeding mostly volunteers.

There were some new staff there and one woman was taking photos for the ASRC Instagram account and asked if we wouldn't mind being in the photos. Monica loathes being in photos and Sammie isn't particularly thrilled and I don't mind as long as I can approve the photos before they're posted because I've learnt that what some people consider a nice photo isn't often a nice photo at all! Everyone has got their own dislikes about how they photograph (I've learnt from being on the other side of the lens that everyone says that they hate having their photo taken).

The ASRC woman did however find her favourite model out of the three of us. "Can we focus on you? You've got the friendliest face," she said to Monica. I've always told people that I've definitely got b*tchface and that just proves it yet again because apparently I don't have a friendly face (it's called RBF and it's definitely real!). And the irony is that of course Monica is the one that hates being photographed the most!

So tell me Dear Reader, how do you feel about being in photographs? Hate, love or indifferent? And have you got RBF? Do you like pilafs?

Serves: 8 as a side dish

Step 1 - First fry the onions in half of the oil on medium heat until soft and caramelised. Add remaining oil gradually when the onions need it when the pan gets dry. It will take around 10-15 minutes all up. Add the bay leaf, turmeric, cardamom and cinnamon and fry for a few minutes until the fragrance intensifies. Season with sugar and salt.

Step 2 - Rinse the rice with warm water several times until the water runs clear and then place in a rice cooker or a large pot with the onion mixture and stock and set to cook. If you don't have a rice cooker, use a large pot with a lid. I find it best to place the lid on, bring to a boil and then knock the heat down to the lowest heat and leave the lid on for 25 minutes. It's very important to leave the lid on and not let the steam escape if you are using this stovetop absorption method otherwise your rice won't cook properly (a rice cooker is a bit easier in that respect as it self regulates the steam and temperature).

Step 3 - Stir through the chickpeas and season with salt. Sprinkle with coriander or parsley. 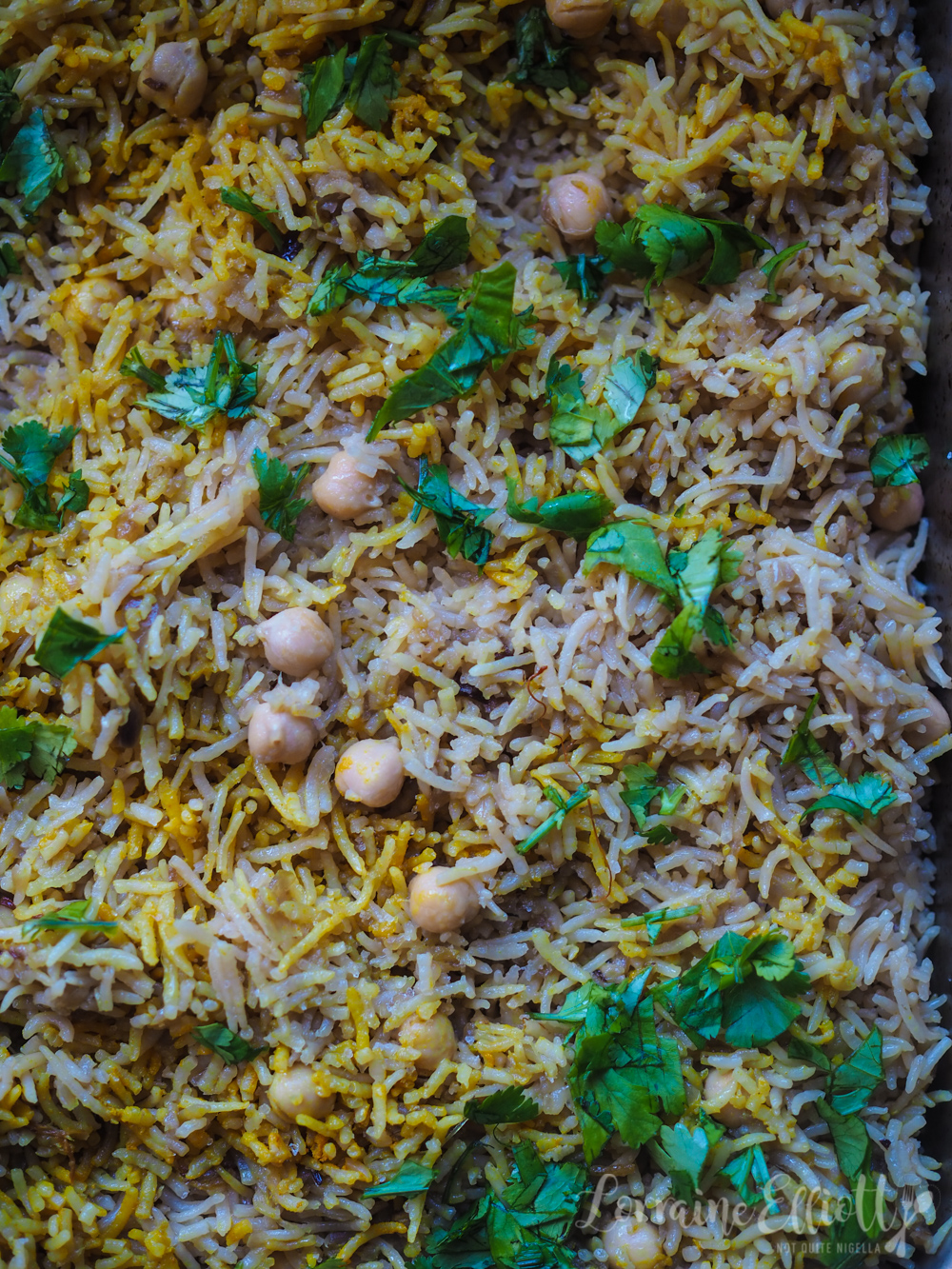