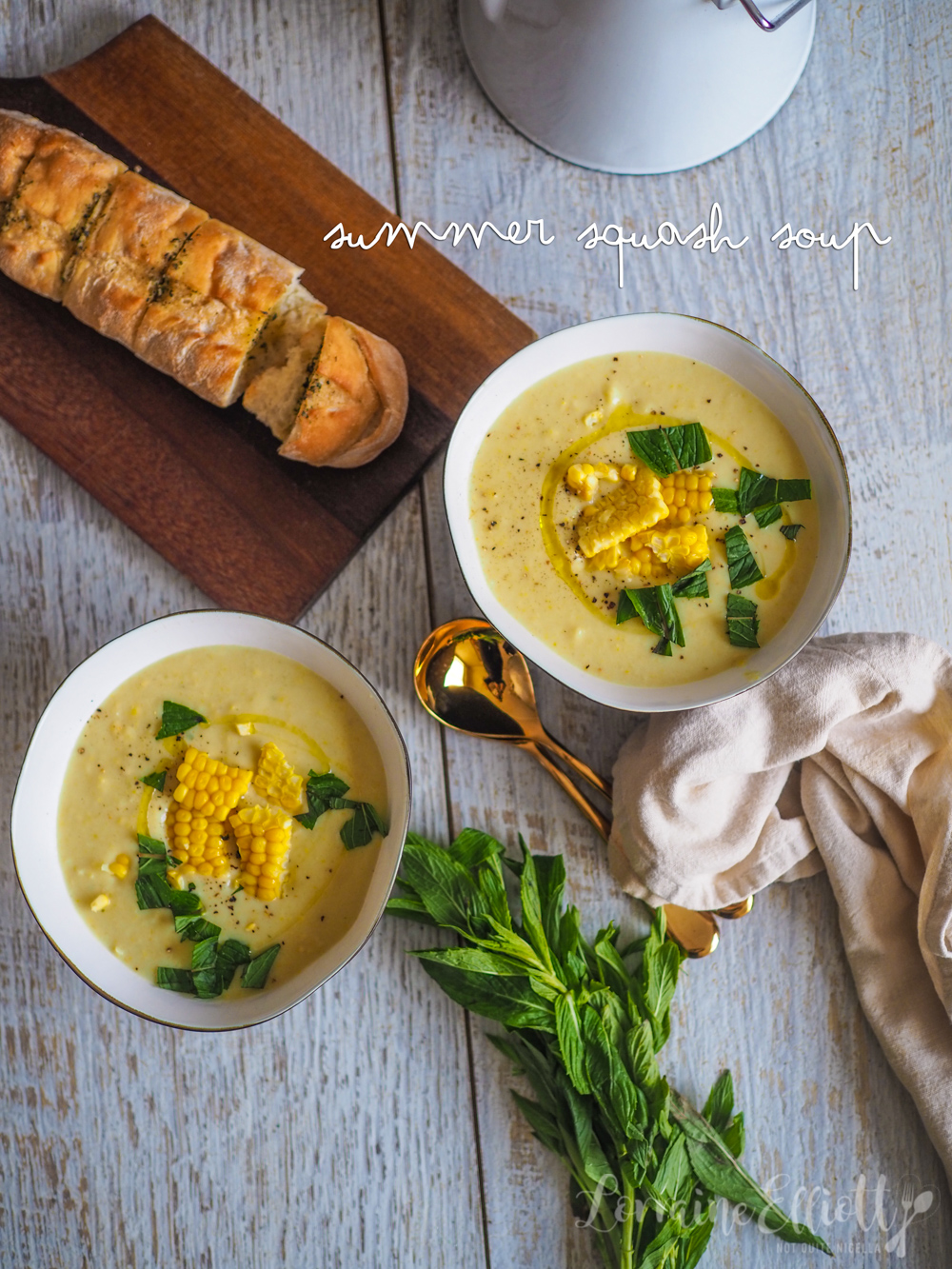 Looking for summer squash recipes? This creamy summer squash and corn soup makes the most of in season vegetables and has a creamy texture despite no cream being used. It can be eaten cold or hot and is full of delicious vitamin rich vegetables. It can also be easily made vegan too (there's a Thermomix recipe too)!

Summer squash are a group of squash that are harvested when immature so that their skins are thin and soft. They include long yellow crookneck squash, zucchini, pattypan squash and loofah or luffa squash (which when mature dry out and become loofahs for the shower!). 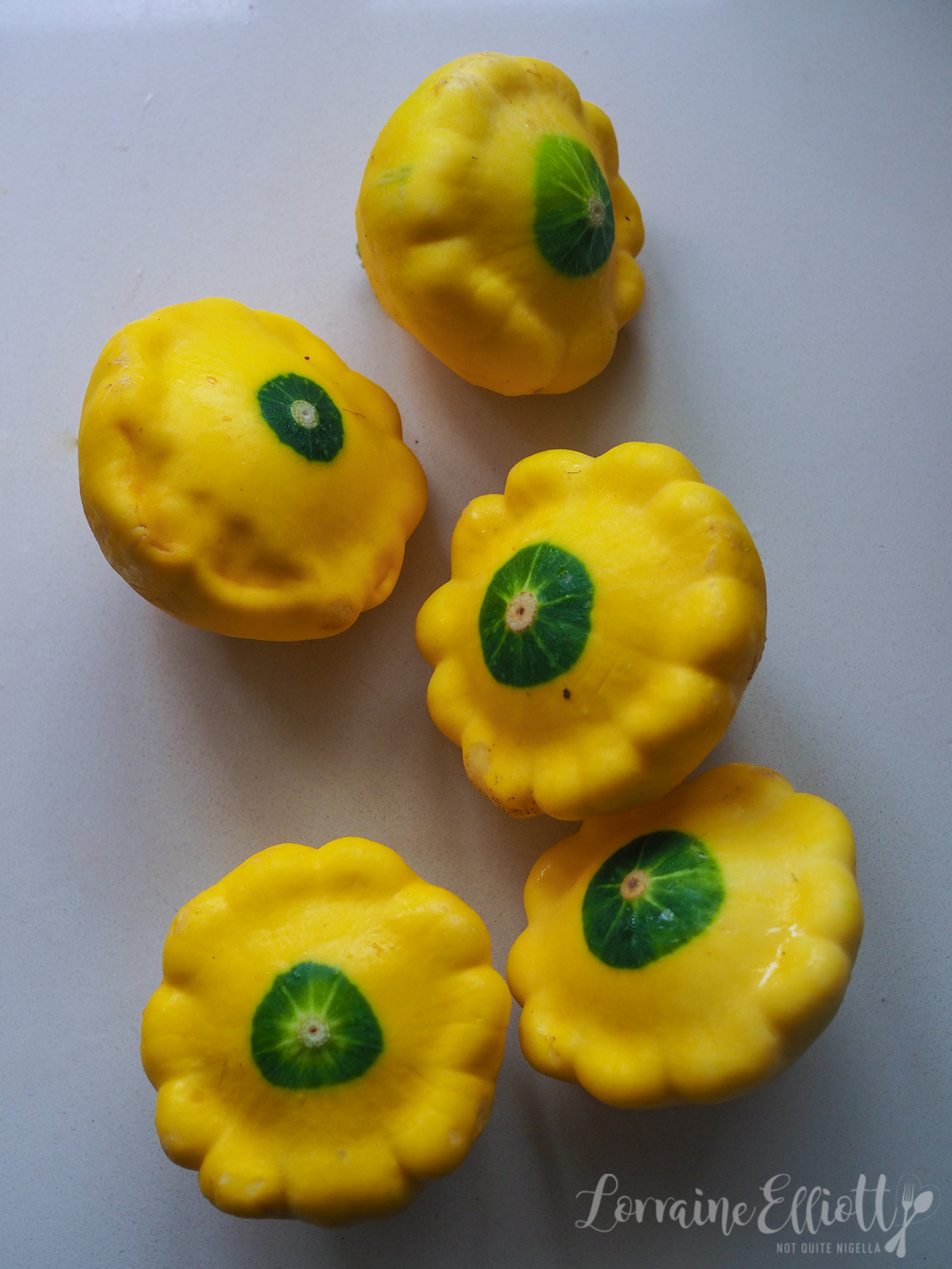 Button or Golden Squash In this case I used button or golden squash for this soup. In Australia we just call this yellow, golden or button squash while pattypan squash is the American name for them. They are usually a golden yellow in colour with scalloped edges and look a bit like a spinning top. They are eaten skin and all and are high in fibre and contain Vitamin C and beta carotene which converts into Vitamin A for healthy skin.

What else can you do with golden or button squash? Although small they can also be stuffed or added to stews or roasted. Basically whatever you do with zucchini you can do with button squash. 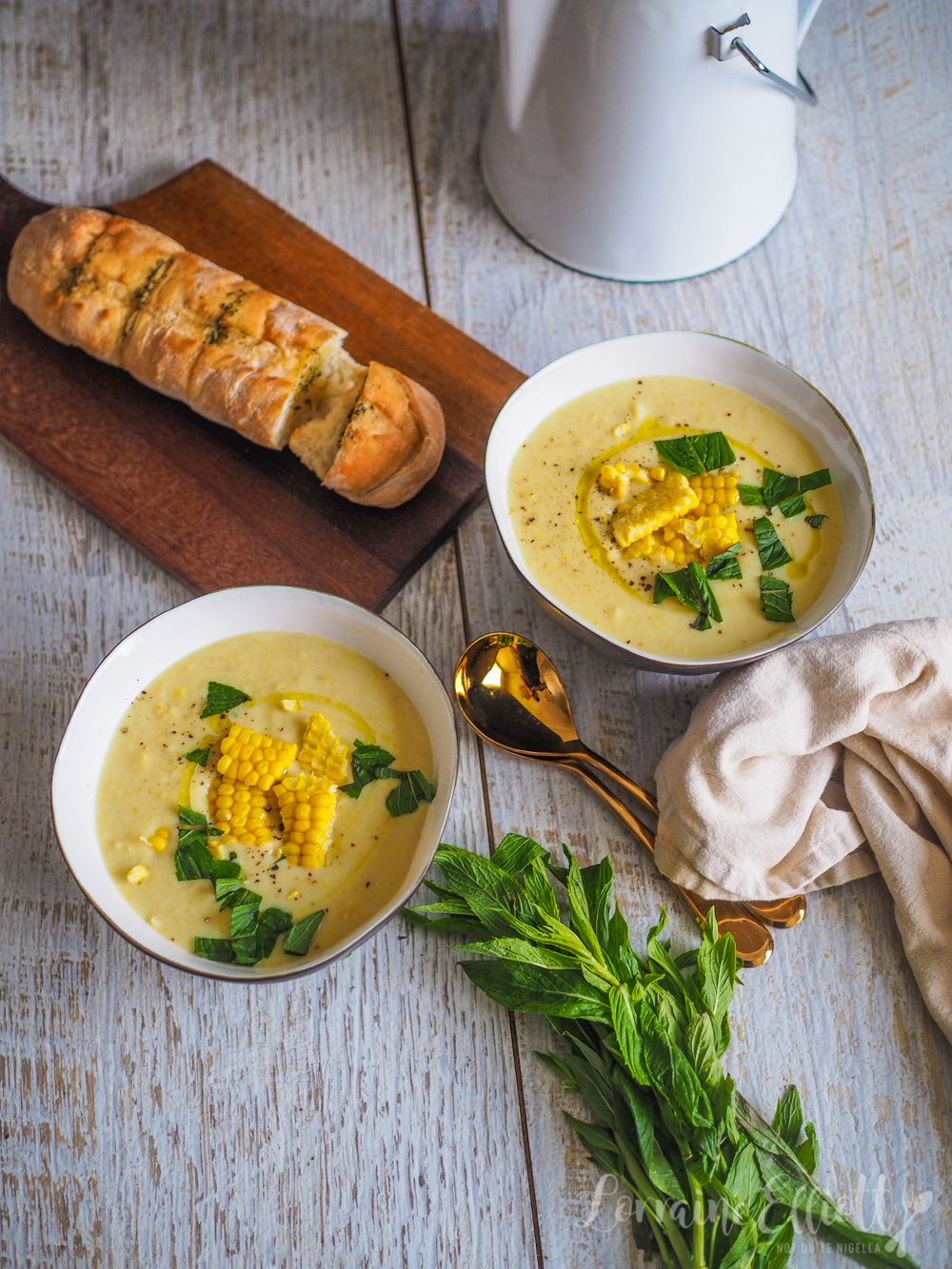 I decided to make a soup with the golden squash as it has been unseasonably grey and chilly. This button squash soup also has some potato added to it for texture as well as some corn for sweetness and flavour. I used coconut milk to give it a creamy texture or you can also use evaporated milk.

I needed this soup because I had caught a bit of a cold. I actually caught the cold eating breakfast outside. This past weekend Mr NQN and I stayed at a hotel. In the morning they had sent up a beautiful breakfast so I set up a little video and took photos which wasn't the smartest idea since it was blowing a gale (I should have gotten the hint when all the mint blew away off the French toast). However photos needed to be done and it was a sunny day and the Harbour Bridge looked so nice in the background. After bringing everything out Mr NQN was reluctant to bring it all back in. 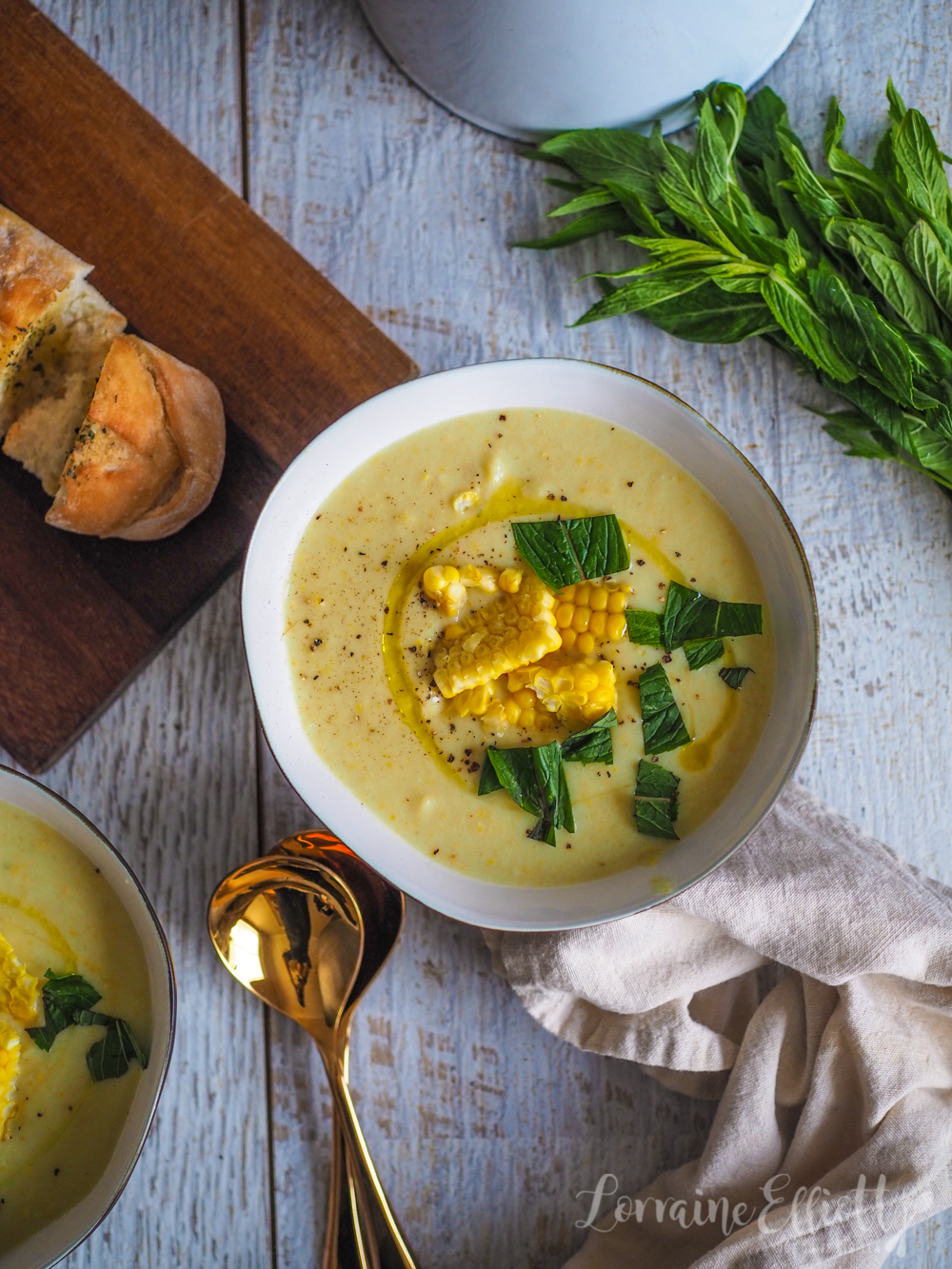 "Do we have to bring it all back inside? Can't we just eat it outside?" he said which a whine in his voice. I put on some more layers but come that afternoon I was sneezing and cold with a blocked nose and a sinus headache.

I have read that you only catch cold or flu from someone else and that it's a virus and that's definitely what the internet says when you google it. But I'm living proof that if I do not wear enough layers I will catch a cold. Also why do people always tell you to bring a jumper or "You'll catch a chill"?. And don't get me started on catching cold when the temperature fluctuates... 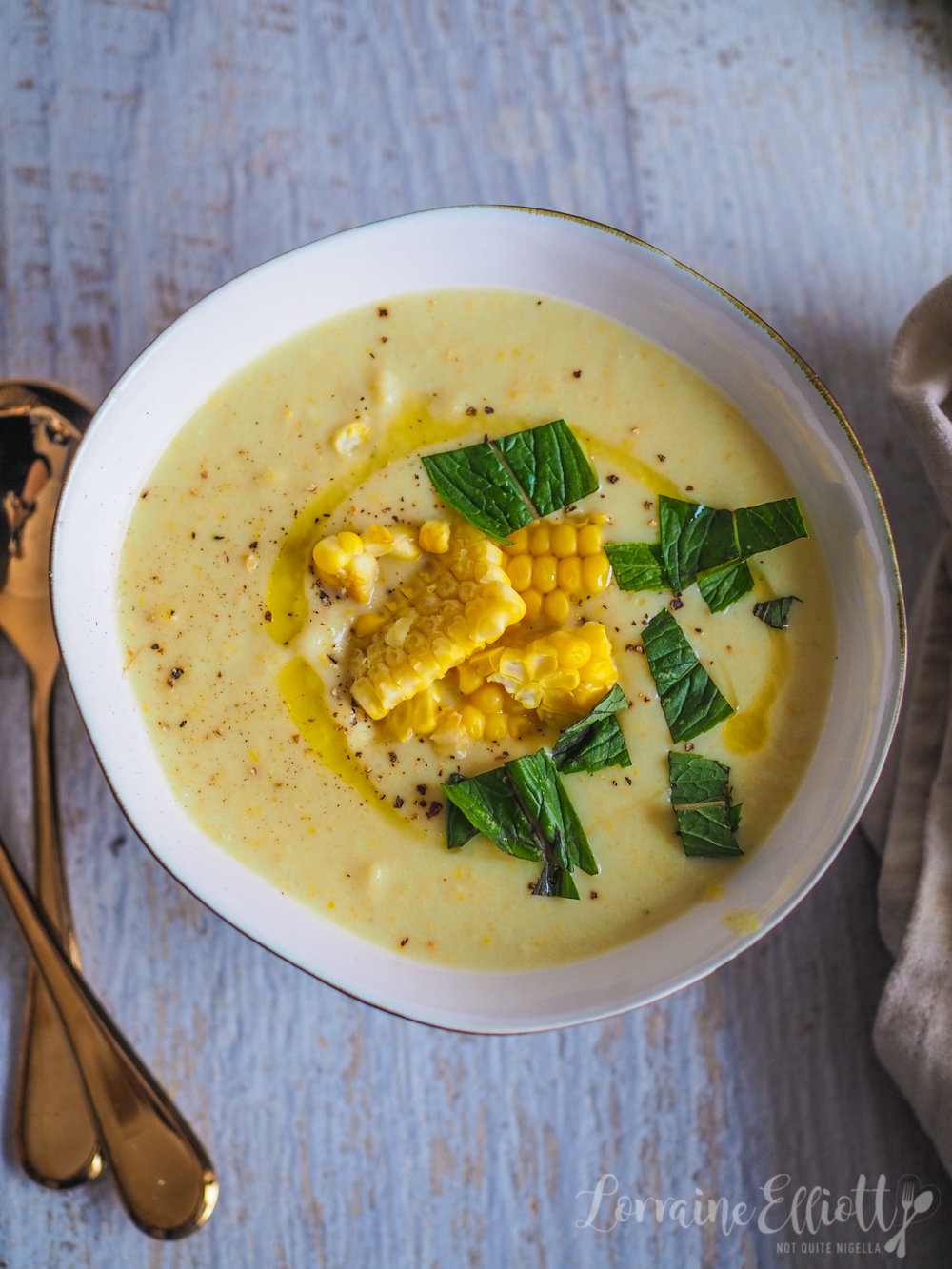 I read up a little on it and your core body temperature has something to do with how effectively the cold virus can replicate. Rhinovirus thrives when your core body temperatures is 32.7-35°C/91-95°F but slows its replication when it's warmer say at 37°C/98.6°F. 1 in 5 people carry the virus in their nasal passages and usually your body fights it but interestingly when it was tested (using mice cells) the body launched a more robust immune attack at higher temperatures than at cooler temperatures of 32.7C or 91F. So now I don't feel like I'm crazy every time I turn up the heat! I'm just trying to keep from catching a cold! ;)

So tell me Dear Reader, do you ever "catch a cold" at colder temperatures? And how do you usually cook summer squash? 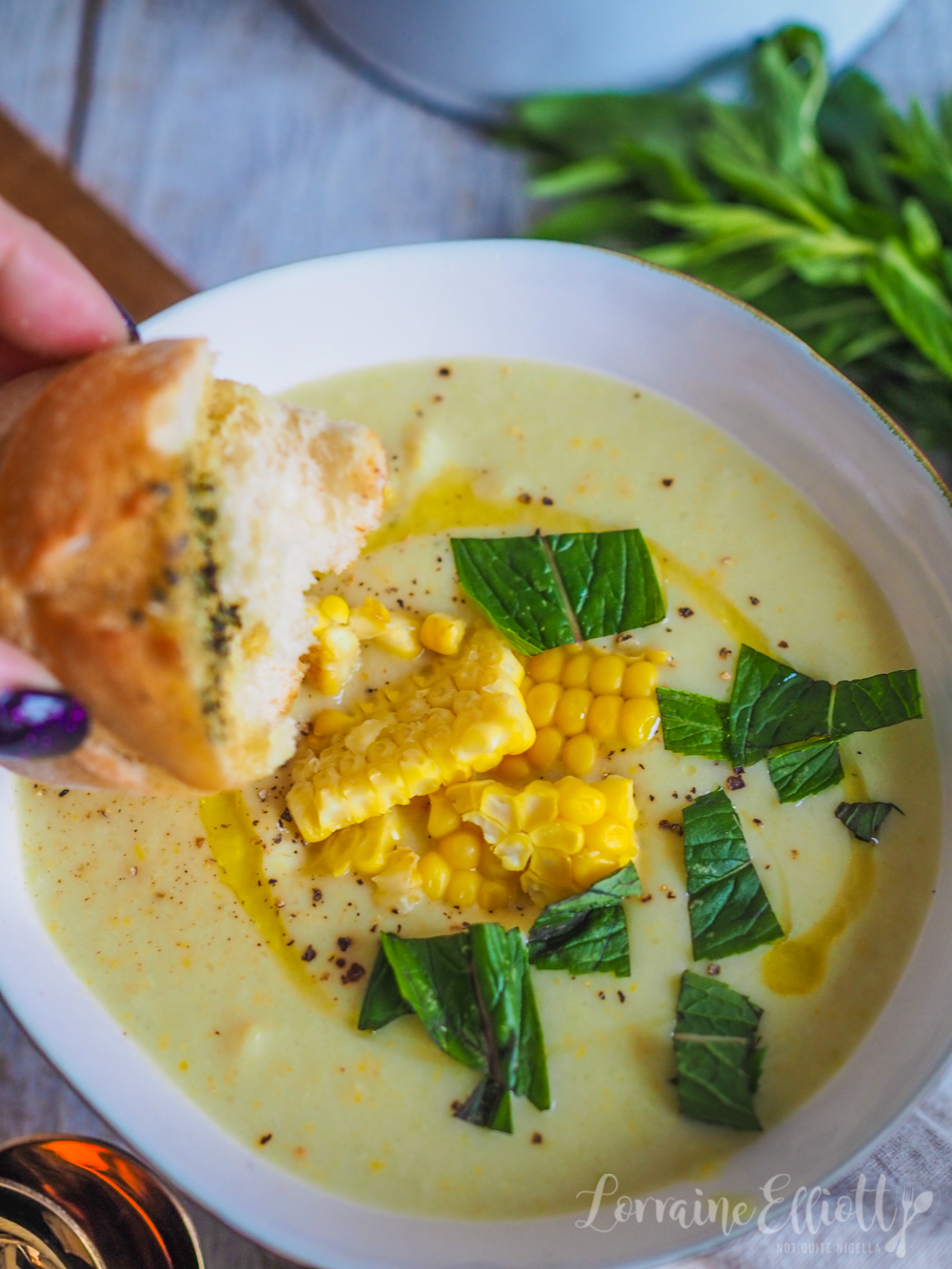 Step 2 - Roughly chop the squash and potato and divide the corn into two (if you're using a cob of corn cut off the kernels from 1/2 of the cob of corn and with the remaining half of corn, boil in water for 10 minutes and then cut the kernels off the cob). Add the squash, potato and corn kernels into the pot with the stock and cook for 20-30 minutes until the squash and potato are soft. Blend until smooth with an immersion blender.

Step 3 - Stir in the coconut milk or evaporated milk and season well. Add the extra corn kernels from the boiled corn cob and serve with fresh mint and a drizzle of olive oil. 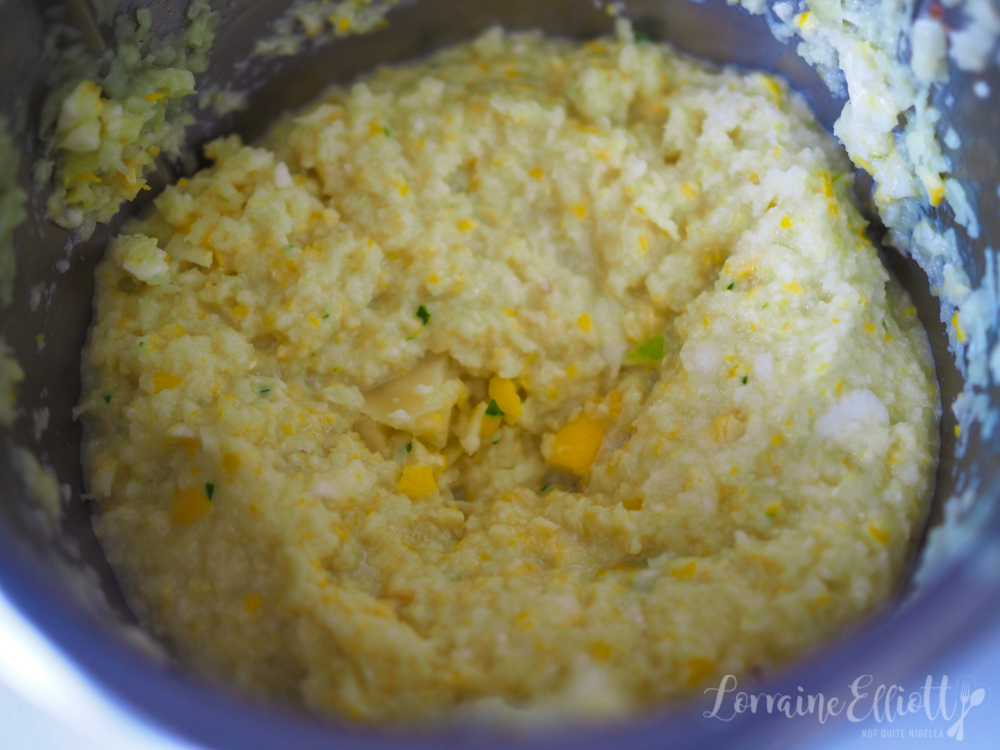 Step 2 - Roughly cut the squash and potato into quarters and divide the corn into two (f you're using a cob of corn cut off the kernels from 1/2 of the cob of corn and with the remaining half of corn, boil in water for 10 minutes and then remove the kernels from the cob). Add the squash, potato and corn kernels into the Thermomix bowl with the stock and set to 15 seconds/speed #6 to chop. Then set to cook for 20 minutes/120C/speed 1. To make it totally smooth set it to 15 seconds/ speed 7 to blend. 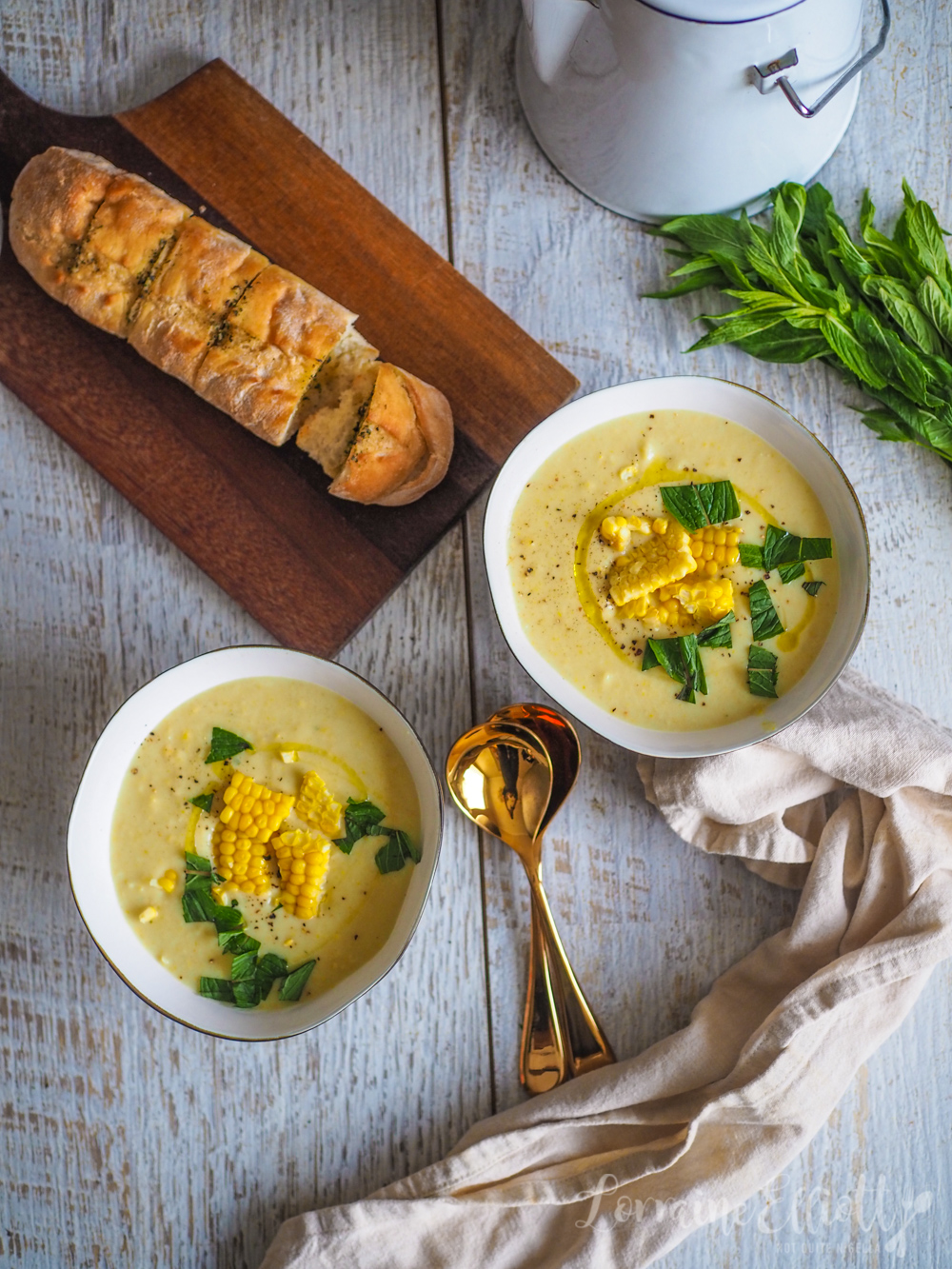 Step 3 - Stir in the coconut milk or evaporated milk and season well. Add the extra corn kernels from the boiled corn cob and serve with fresh mint and a drizzle of olive oil.