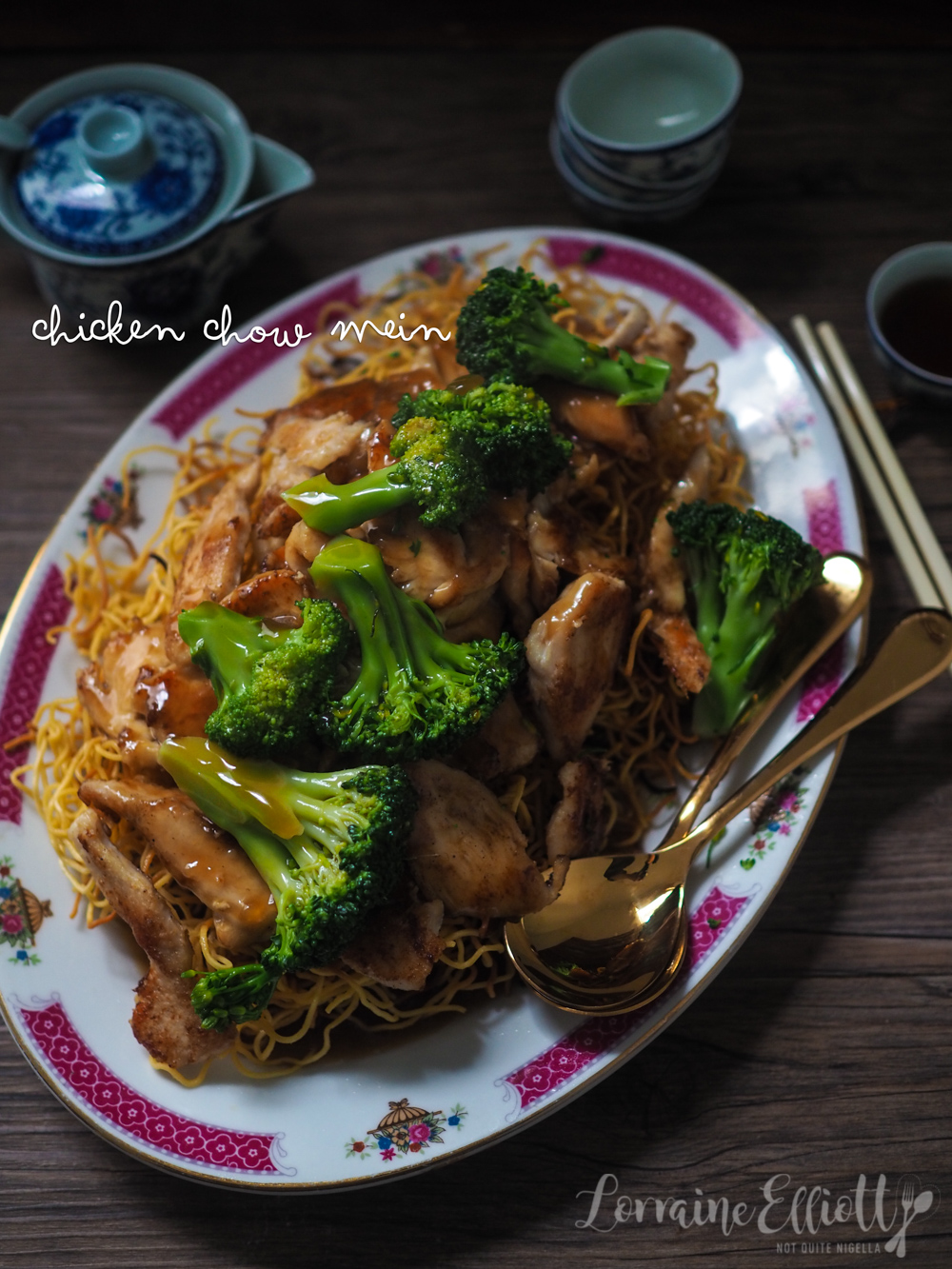 Hands up who LOVES chicken chow mein noodles? Well this version of chicken chow mein is like the kind that you get at Chinese restaurants with tender chicken strips, broccoli, crispy noodles and a very moreish glaze sauce. I promise everyone will be asking you which restaurant you bought this chicken chow mein from! This is a pushy recipe Dear Reader.

This was my favourite dish at our local Chinese restaurant Hoh Won in Kensington. They do this with either soft or crispy noodles and we've always loved the crispy noodle version. Now that we've moved we can't exactly pop down the read to get it so I decided to try and make a copy and I think it tastes exactly like it (perhaps a bit less oily). I was so excited about how it was exactly like theirs that I made it the next day and the next and Mr NQN did not complain one bit. 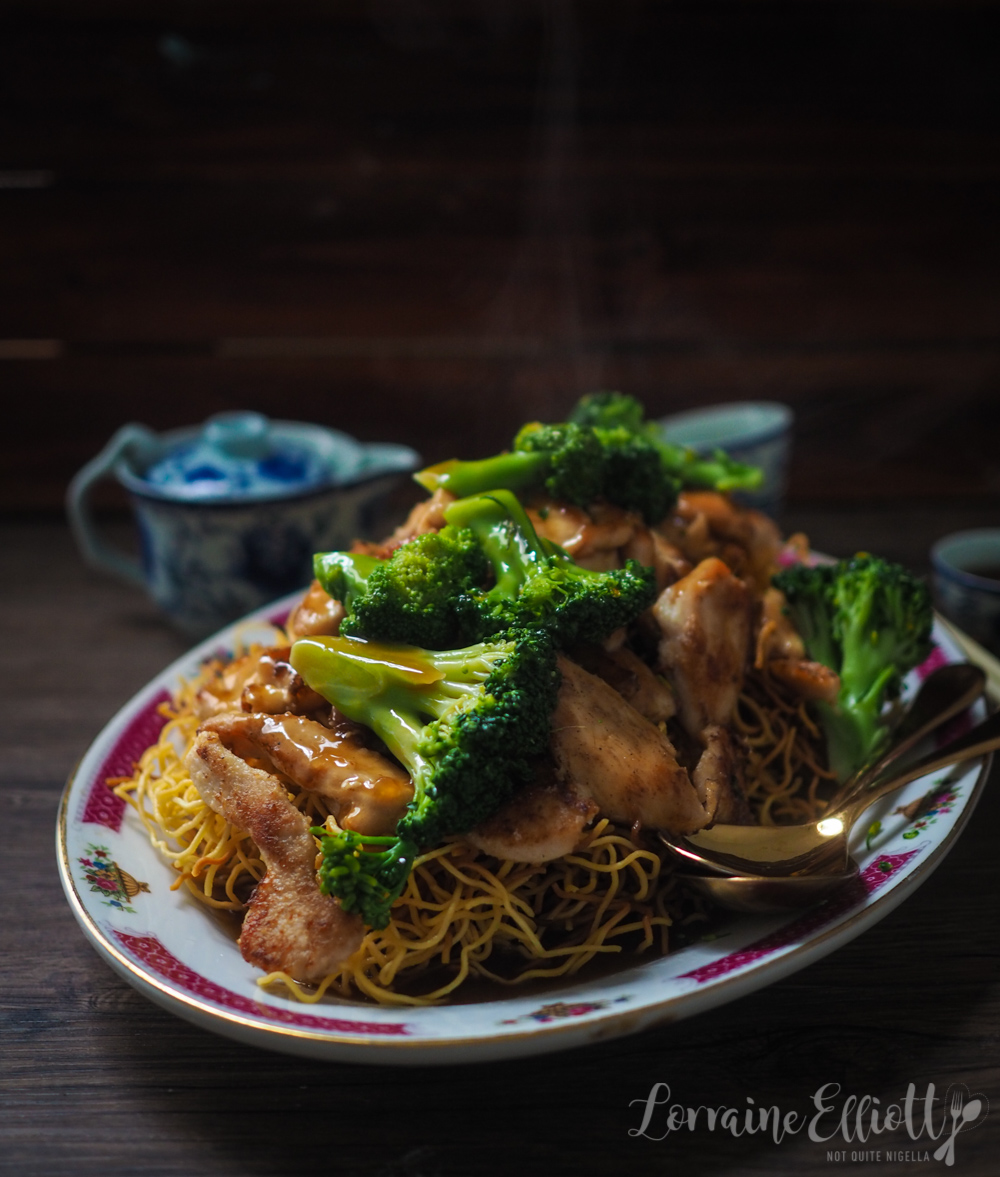 1 - You can use chicken thigh or breast, it's up to you really. Both are delicious and thanks to the bicarb in the marinade, even the breast will be very tender.

2 - I recommend slicing the chicken thinly. You can buy chicken cut into stir fry pieces too. 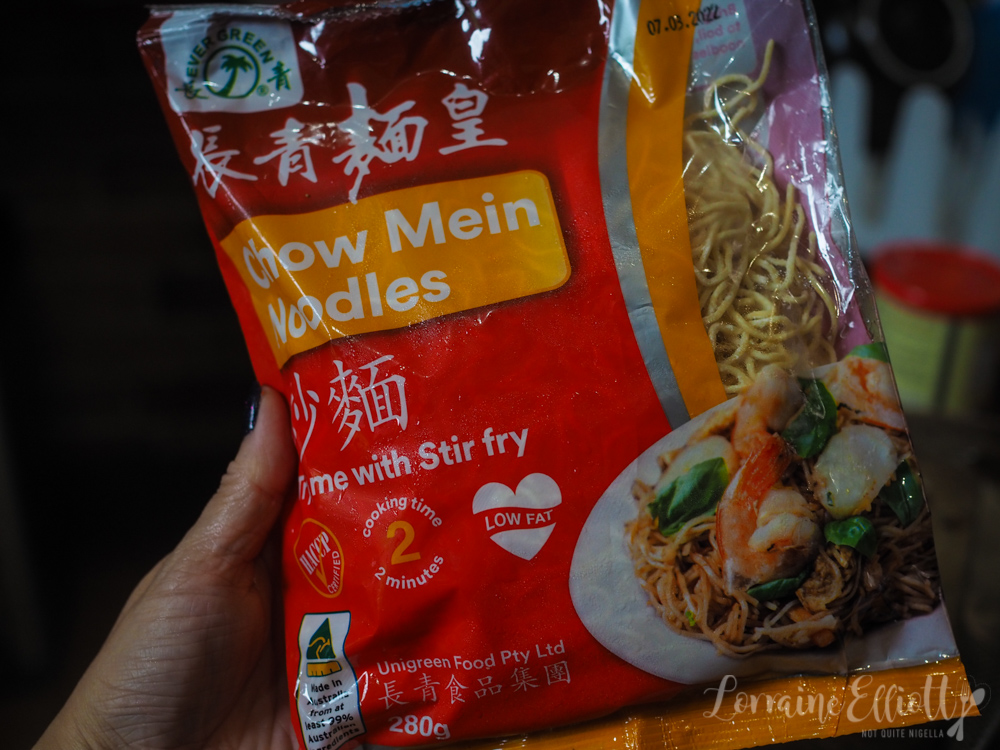 3 - I like using chow mein noodles from the fridge section of the supermarket. They're lightly covered with flour and are fine in texture. These noodles require cooking before eating.

4 - If you are being careful about your oil intake you can make these with soft noodles aka noodles that are just boiled. If you make this version you can cut down the oil measurement to 1 tablespoon instead. But I hope you'll give the crispy noodles a go as it tastes exactly like what you would get at a restaurant. 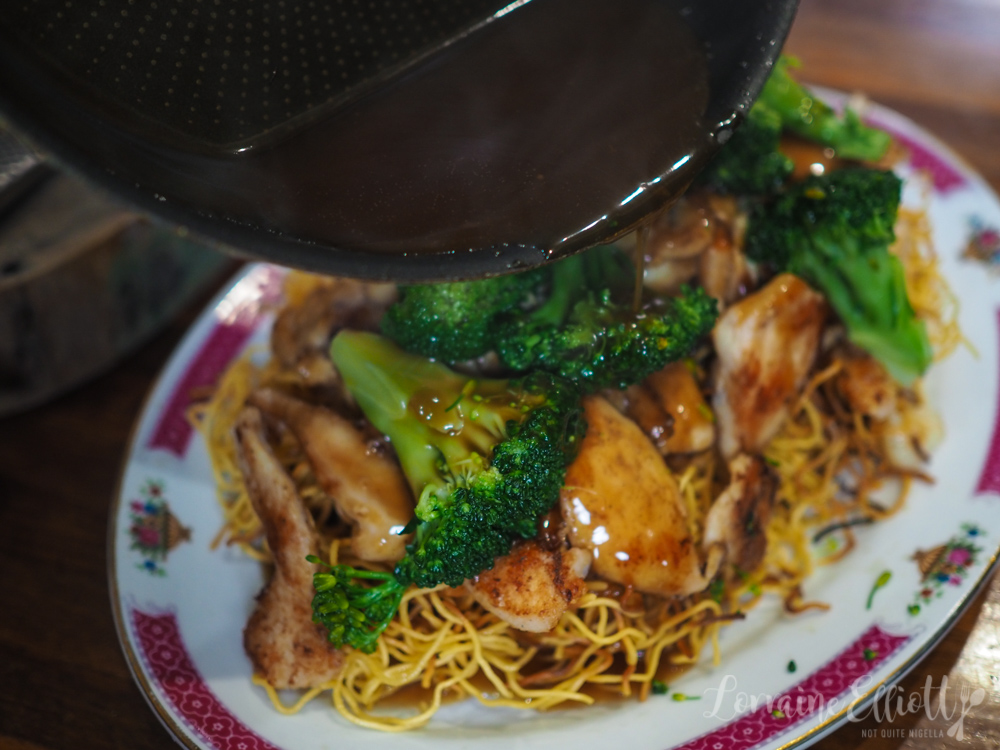 6 - This sauce is a really handy one to have up your sleeve. I like to steam or blanch broccoli florets and pour the sauce over them for a really tasty, healthy and simple Chinese side dish.

I had a hankering for chicken chow mein which is what prompted me to develop this recipe. Surprisingly, while I missed the Chinese food from Hoh Won I have found that I haven't really missed where I used to live. It's funny how you just move on from things. The only thing I miss are having my favourite butchers, seafood market and supermarkets. I'm lucky that my vege box guy is delivering to our new address but I've found it a bit of a challenge finding the right butcher for me and I still go back there for meat as it isn't that far for good quality meat.

I've also had a bit of trouble finding a regular supermarket from which to do click and collect. I decided to pick up an order from a neighbouring suburb about 8 minutes drive away. The supermarket was located in a shopping mall and well you know me, I went into the wrong entrance via the wrong street and spent 10 minutes driving around the car park and then the surrounding streets trying to find where to go. I ended up in the right entrance but on the wrong floor - you know when you've got someone tailing you so close that you feel like you have to keep driving? After I ditched the tailgater I stopped and rolled down my window and asked a woman with a supermarket trolley where the click and collect bays were. "They're upstairs, one floor up" she said pointing skywards. 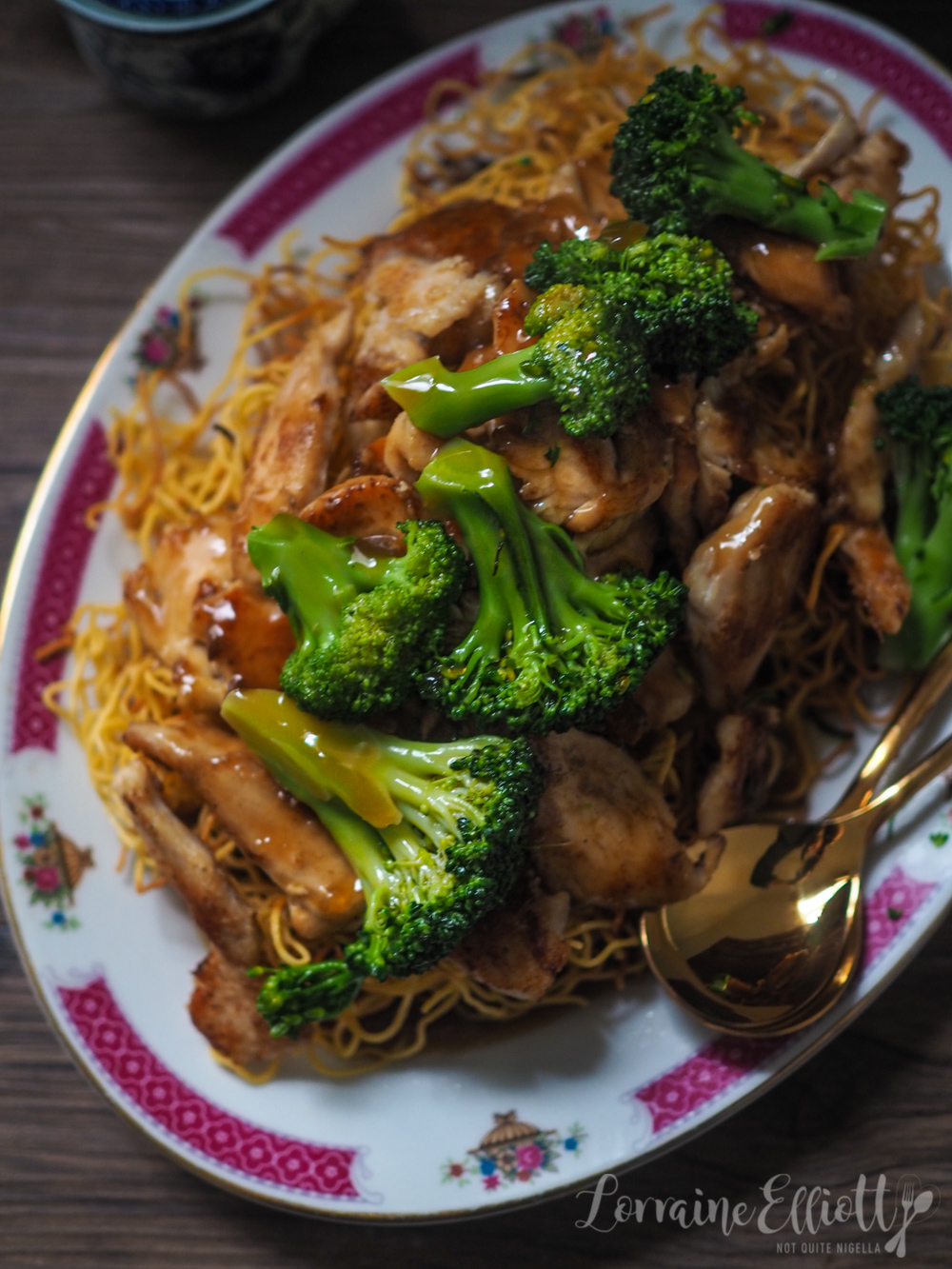 I finally found the bays but they were all full. Two of them had nobody in the cars and one guy was sitting in his car on his phone. I stopped alongside them but there was a lot of congestion in this area of the car park. Horns kept beeping me but I was as far to the side as I could be. A car drove past me and I thought I was in the clear but then another car started beeping his horn. It was an electric orange sportscar with very dark tinted windows and I could feel the testosterone in the car without even seeing the occupants. I reversed as far as I could to try and let them through. I could see them winding down their windows and I braced myself for battle.

In the car were three men in their 50s. They looked like Mike Ehrmantraut from Breaking Bad except if he were chiselled out of rock. What I'm trying to say that they looked like the kind of guys that would kill people for a living or the type of guys that can lift an entire person up with one arm. The one near my window shouted in a thick Russian accent, "We are both trying to get to the same place!" while chuckling and holding his hands up comically. That was not what I was expecting and I sort of smiled and nodded a bit stunned. Then the man that was on his phone left - he wasn't waiting for his groceries he was just taking up a C&C spot.

I notified the supermarket that I was there and the girl on the other end had a real "I don't care" vibe but when she came down she was helpful and offered to pack the groceries into my bags for me. When I asked her about the click and collect car spots taken up she rolled her eyes and said, "They're always doing that here. It's the worst." She leaned in and said that this was one of the worst shopping centres for road rage and bad drivers. Then she gave me the names of two much more peaceful supermarket locations to try. I gave those a try but after being caught in the crazy rain I made the executive decision to get our groceries home delivered. And we lived happily ever after!

So tell me Dear Reader, do you like chicken chow mein? Have you tried it with crispy noodles? Did you have to "shop around" for your favourite supermarket? 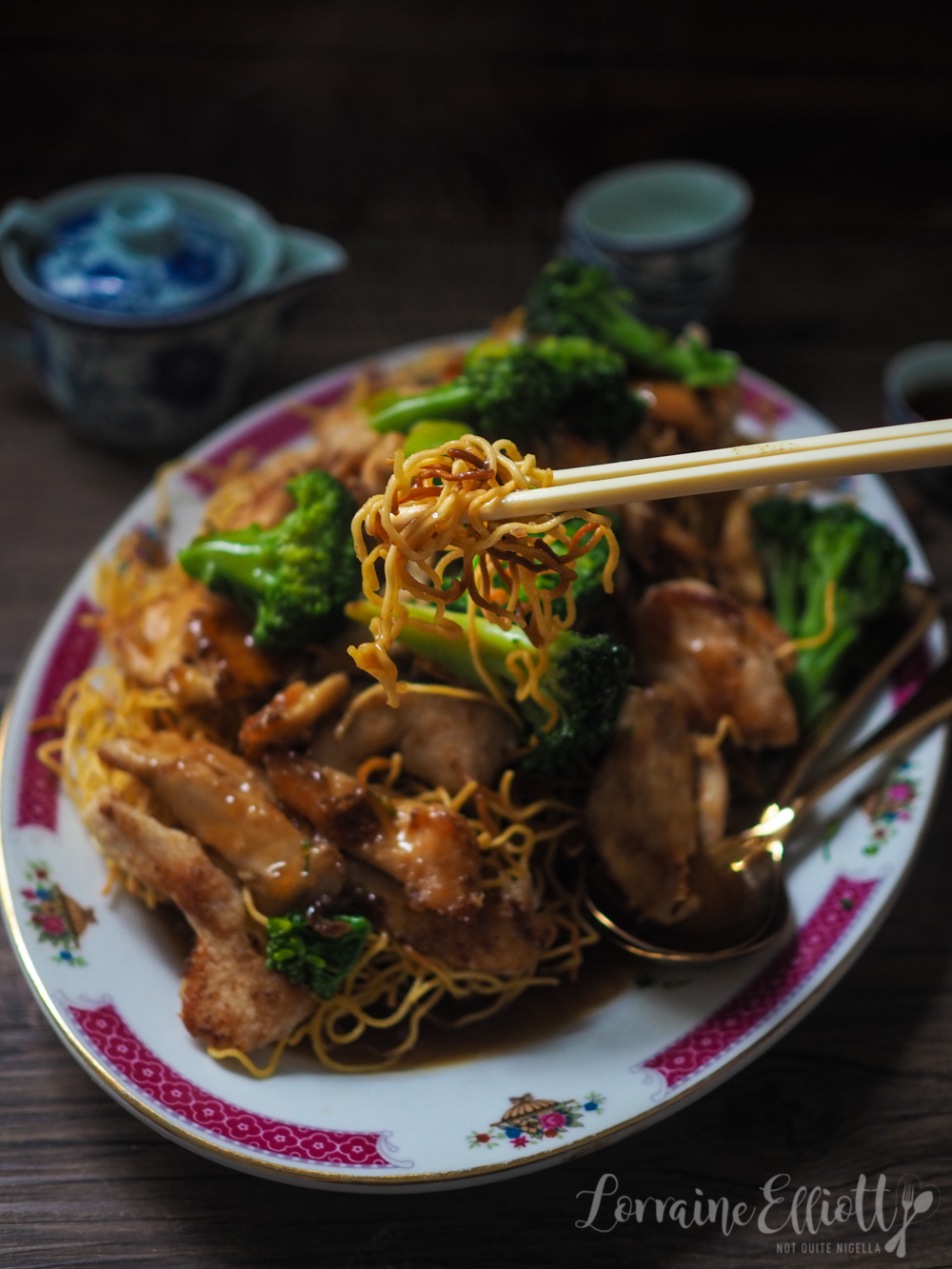 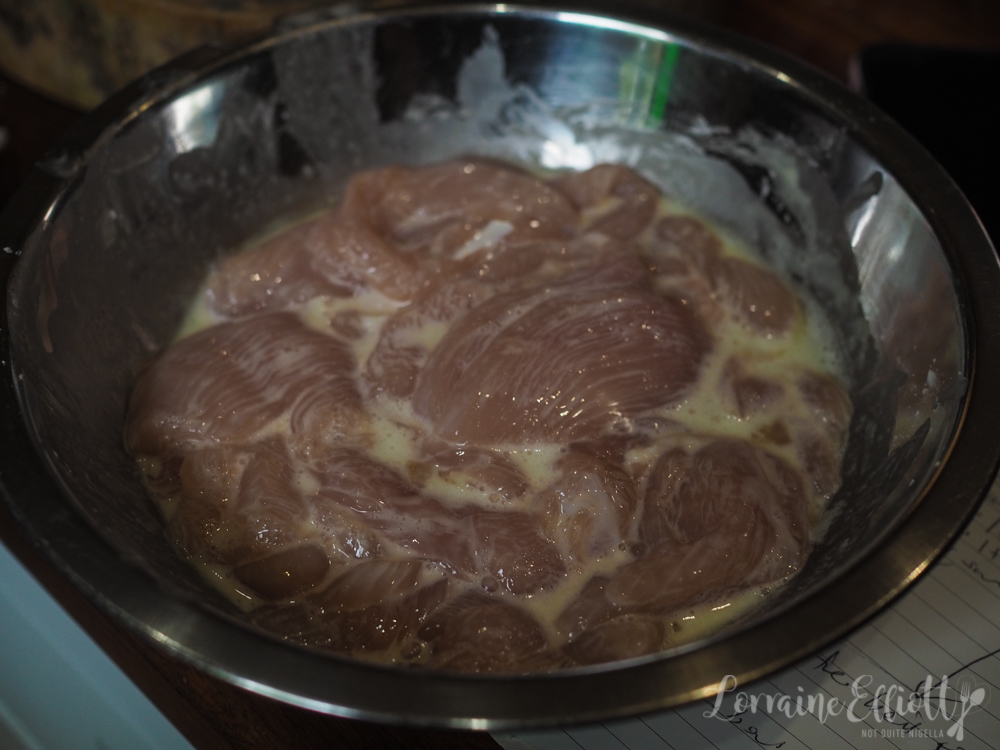 Yeah it doesn't look great but I promise it works!

Step 1 - First whisk the egg white, cornflour and bicarb together in a medium sized bowl and then coat with the chicken slices with this mixture. Marinate for 30 minutes in the fridge to tenderise the chicken. While it is marinating you can cut the broccoli up into florets, get the garlic and ginger ready and measure the sauce out adding everything but the cornflour and water into a jug. 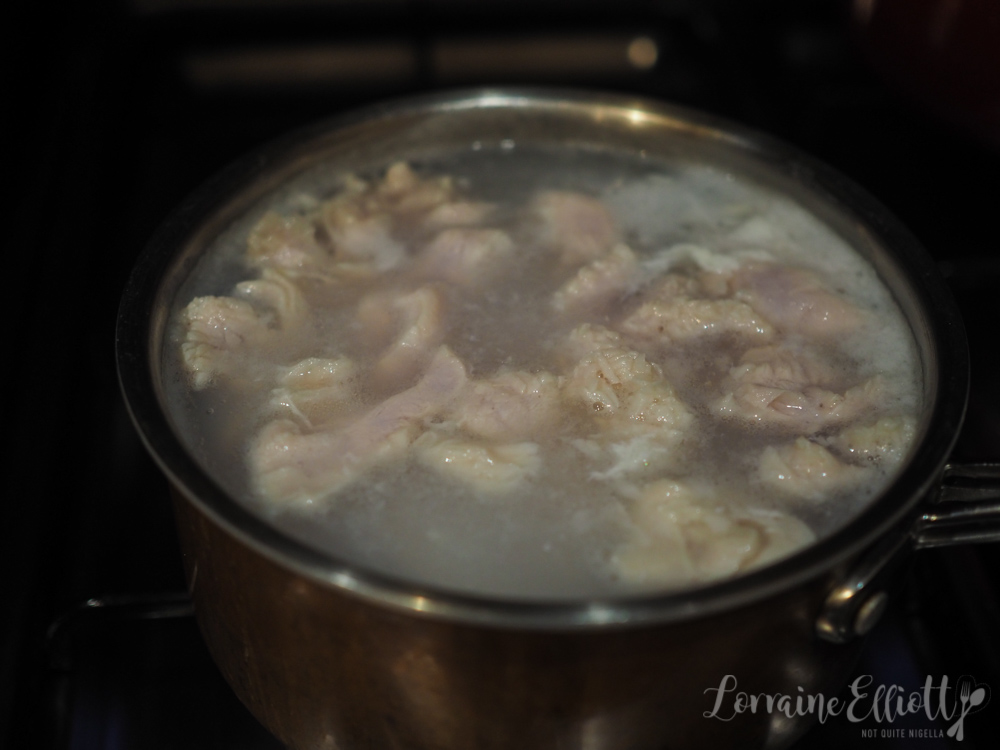 Step 2 - Place a medium pot of water onto boil and cook the broccoli until tender, it won't take long, about a minute will do. Remove from the pot with a slotted spoon and set aside. Then rinse the chicken of the marinade and add the chicken to the simmering water and cook for 45 seconds to 1 minute. Drain in a sieve and keep aside. 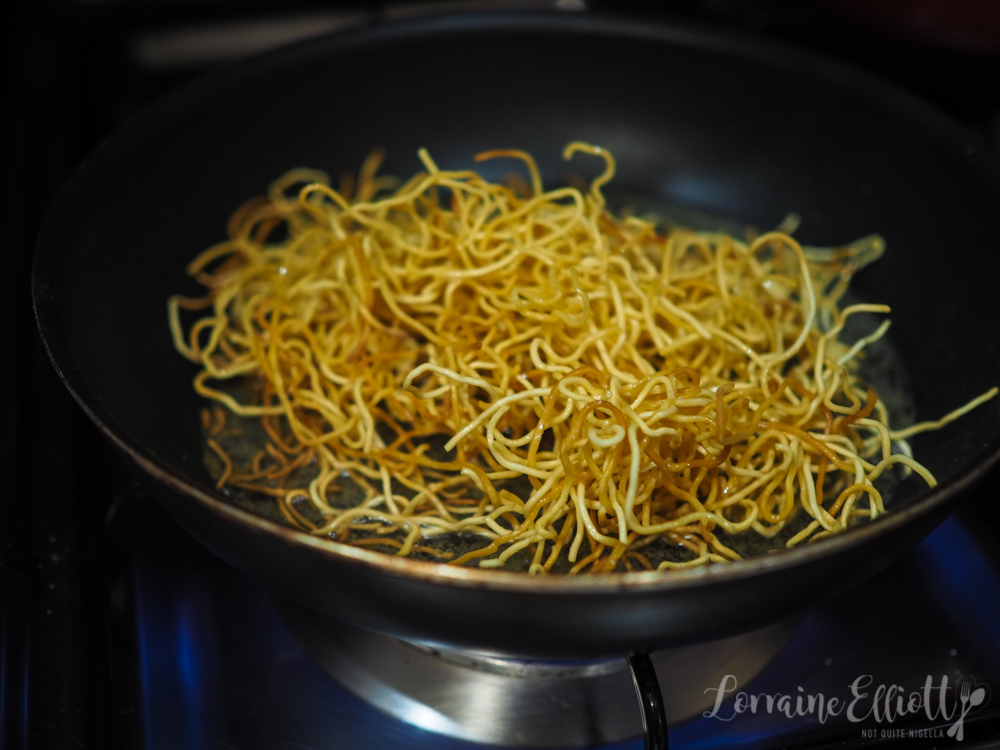 Step 3 - Then switch to a large frypan or wok and have a large serving plate ready. Heat the oil in a frypan on high heat and when the oil is hot and shimmering add the noodles (no need to boil or rinse noodles beforehand). Do this in 2 lots if necessary to avoid over crowding the pan. Cook noodles until crispy and lightly browned turning with tongs to ensure that all noodles get an even cooking. Place the noodles on the serving plate arranging as a bed for the chicken. Remove all of the browned noodle bits and using the same oil and pan turn down to medium high heat add the garlic, ginger and chicken and fry until chicken is golden (this will take around 6-8 minutes or so) and then add the broccoli and warm through. Season with salt and white pepper. Remove from the pan and place the chicken and broccoli on top of the noodles. 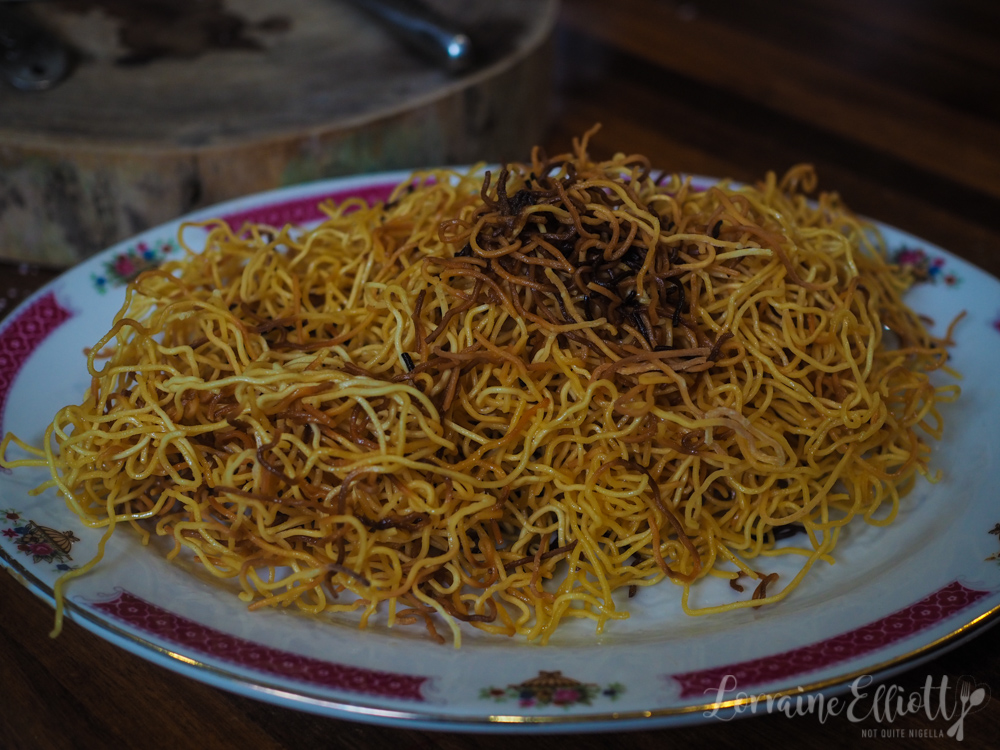 Arranging noodles on the base 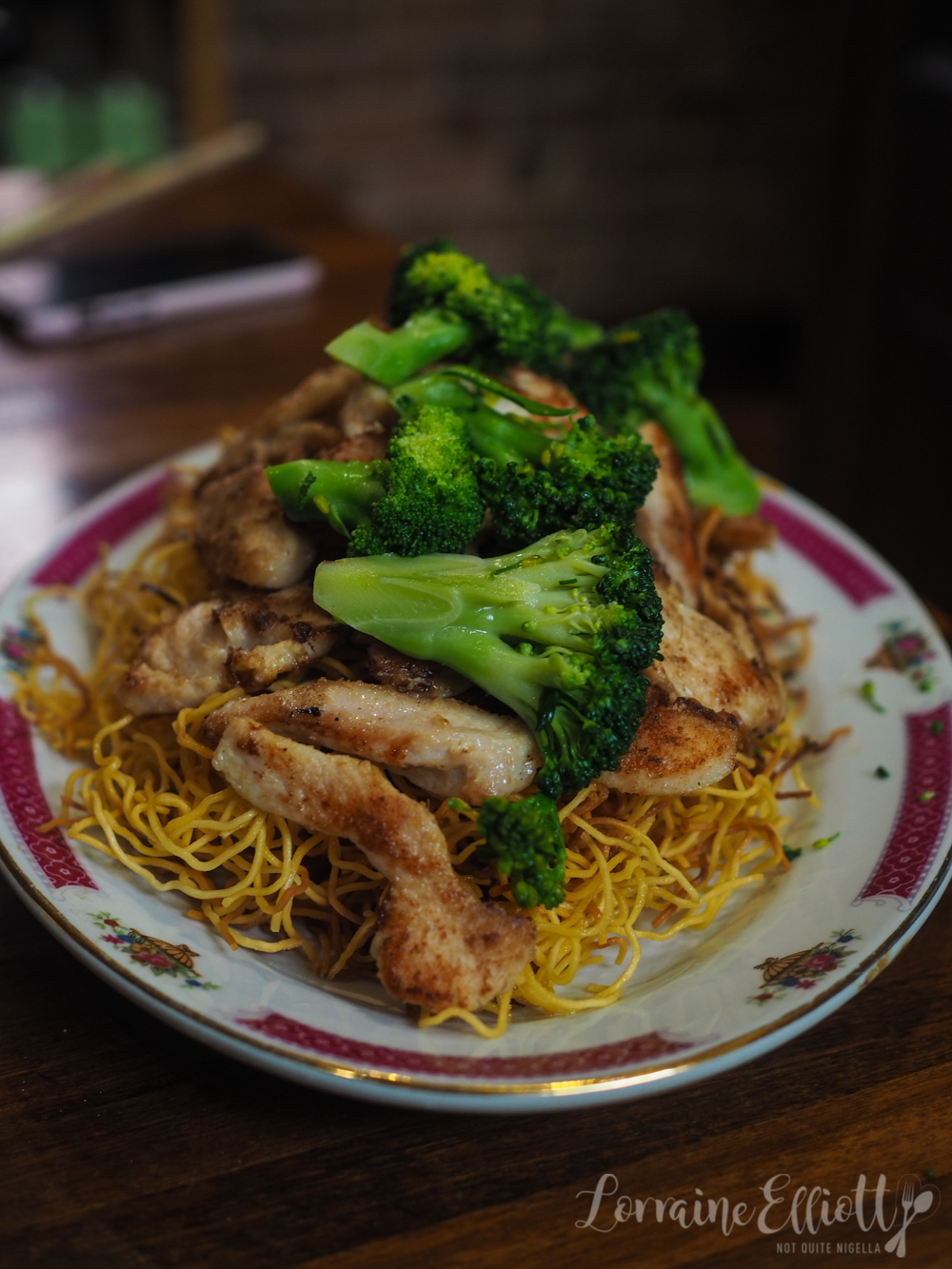 Step 4 - Add the sauce ingredients to the same pan and heat until gently simmering. Then add the cornflour slurry and allow to thicken while whisking. Pour the sauce over the chicken and noodles and serve immediately. 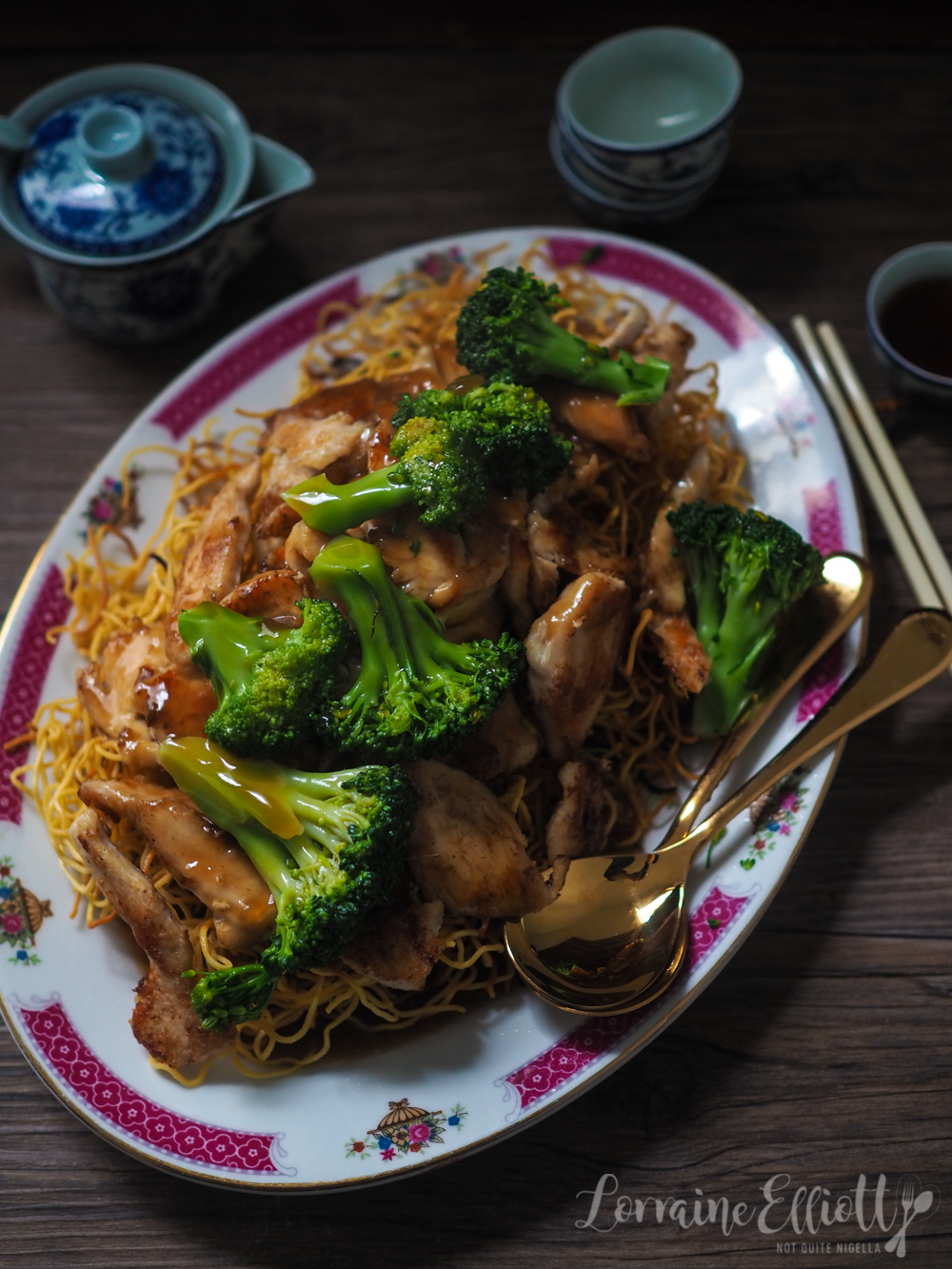