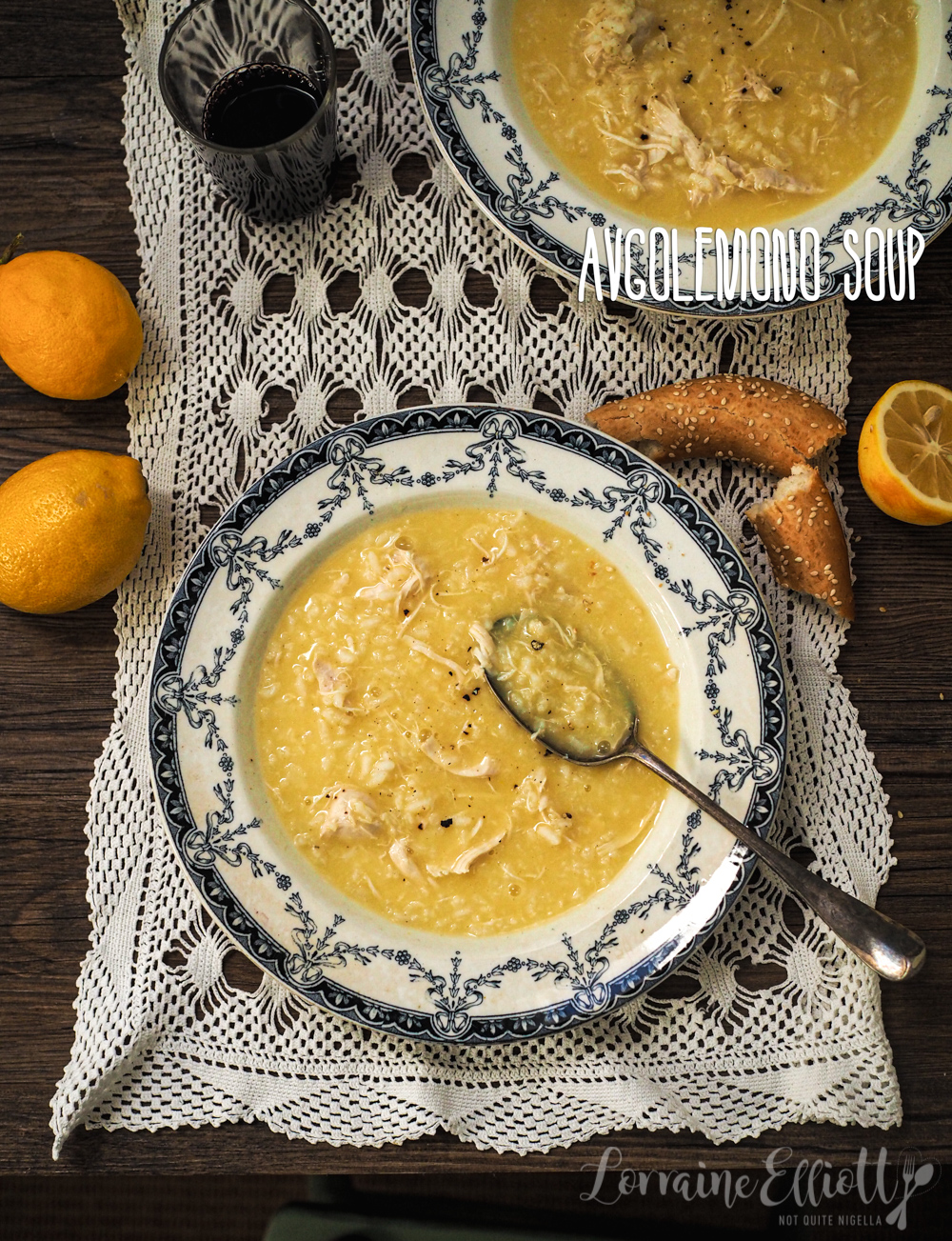 Avgolemono is one of the most delicious Greek soups around and is perfect for winter. This delicious chicken soup has an added health benefit of lemons. Chicken is cooked in broth until tender and then eggs and lemon are added to give this dish a creamy finish. This is a wonderfully simple soup but so rewardingly good!

Avgolemono soup ("avgo" meaning egg and "lemono" meaning lemon in Greek) is most commonly associated with Greek cuisine but lemon egg soups and sauces also appear in other cuisines like Arabic, Turkish, Italian, Balkan and Sephardic Jewish. Some say that the origins of this soup are from Sephardic Jewish cuisine - the soup agristada is said to be a cousin of the avgolemono. The egg yolks are whisked with lemon juice and then added to the soup to thicken the soup. The resulting soup is creamy textured, comforting but with a lovely lemony flavour to it. 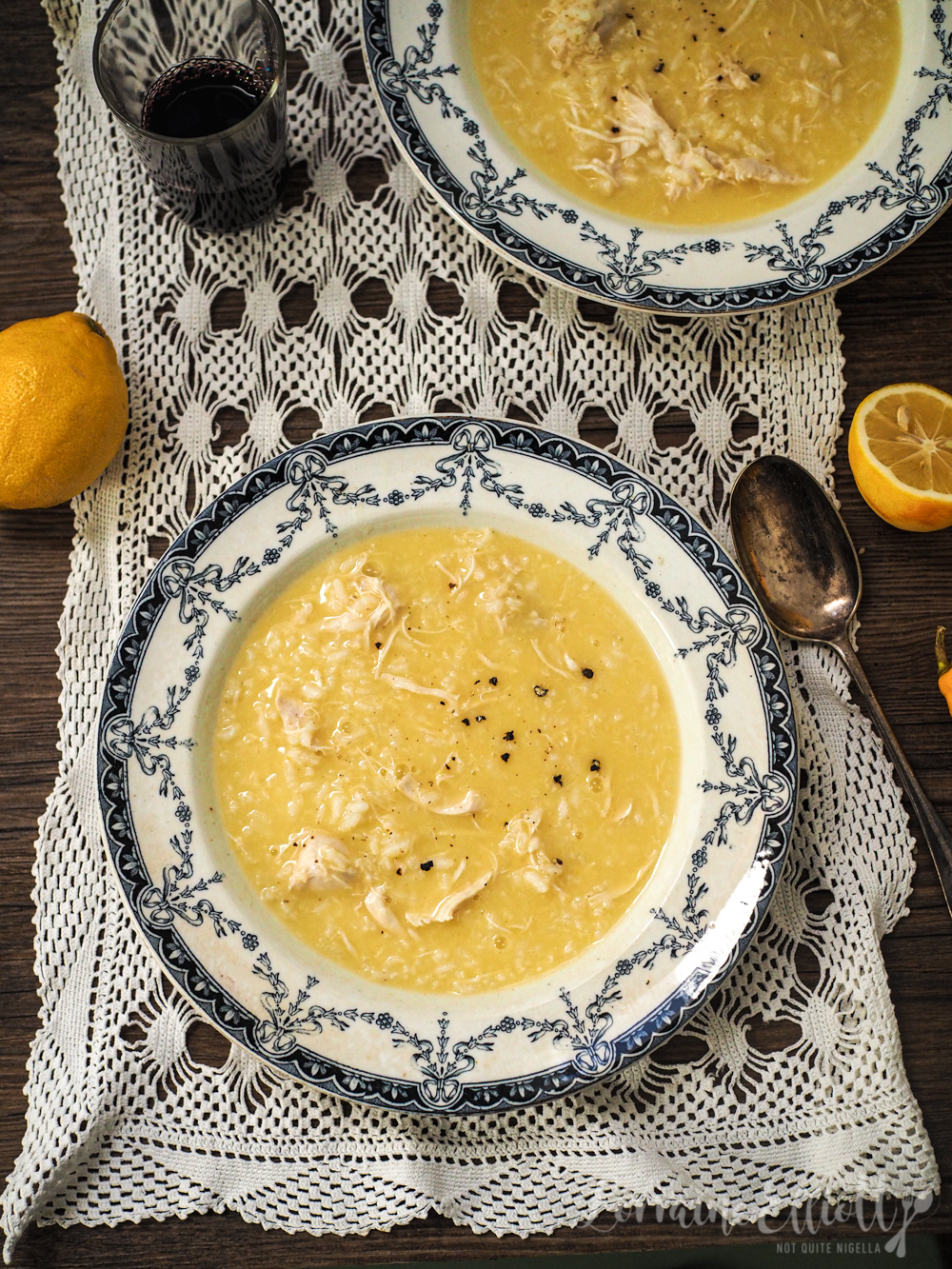 Avgolemono soup is very easy, the only sticking part which is easy to get around is adding the eggs at the end as you don't want it to curdle. Don't use cold eggs, use room temperature eggs and cool the soup for 10 minutes. Then temper the egg yolks by adding in half a cup of the soup. I find it best to use egg yolk as egg whites coagulate at a lower temperature so you get strands of white in the soup (although they probably resemble the chicken anyway). Also can I just say that adding lemon zest to a chicken soup is absolute genius? It adds such a delicious flavour to it even if you don't add the egg yolks and lemon juice and I'll be adding lemon zest to all my chicken soups from now on. 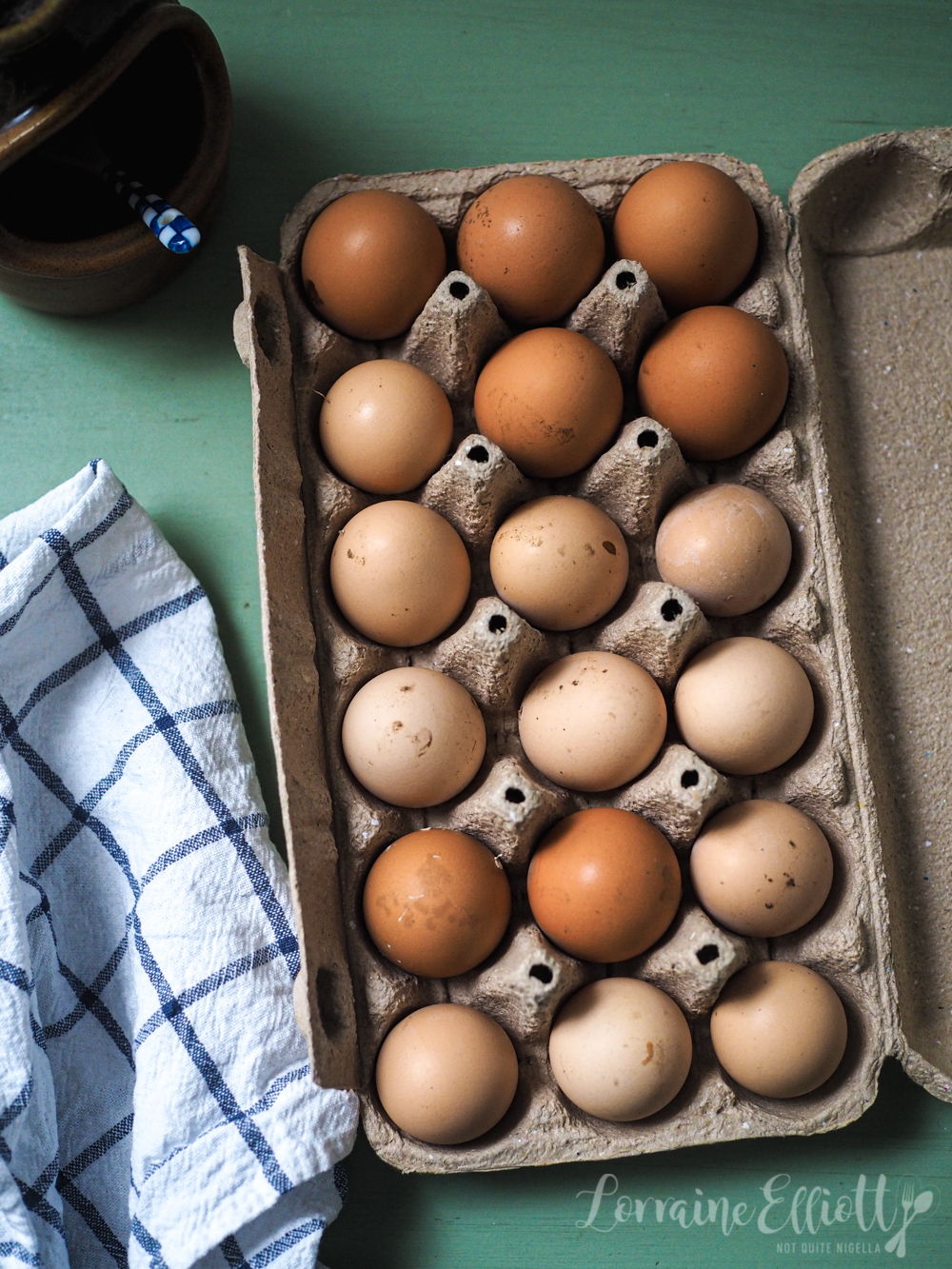 I got this recipe from Valentina who is a phenomenal Greek Cypriot cook. She uses tenderloins in her Avgolemono while her late mother Katina used a whole chicken. Tenderloins make fast work of Avgolemono and it is still no less delicious. Valentina gives me lots of eggs and citrus and I give her cakes. She also gave me the gorgeous vintage lace tablecloth used in these pics. 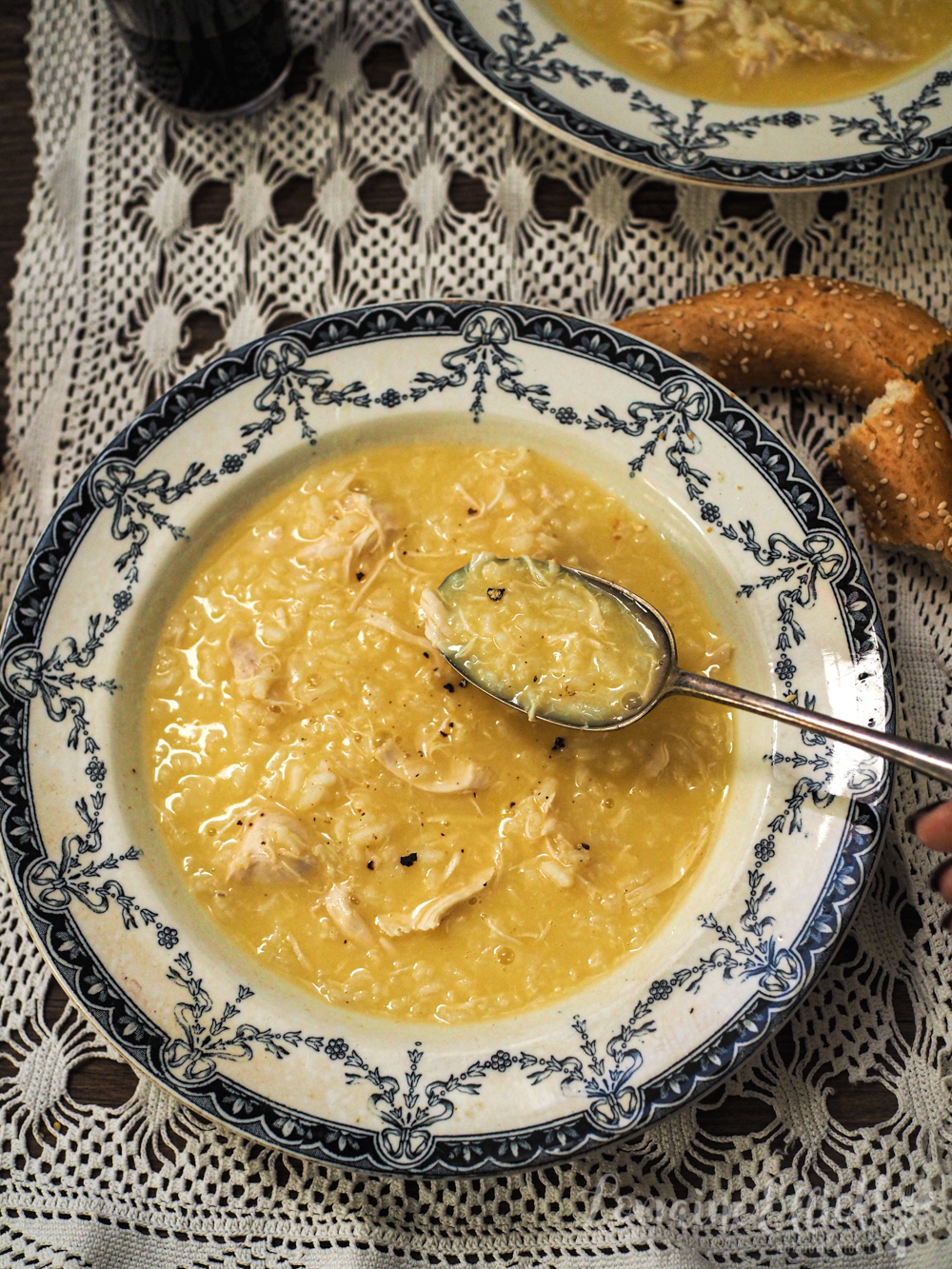 We are all a big fan of this soup and that includes Teddy Elliott because it involves his favourite food: chicken. Now that Teddy is three years old and living in a house he has changed a little bit. Teddy no longer goes out for his morning walks which was a nice surprise for Mr NQN who used to wake up early and reluctantly pull on layers and then take him out in the morning chill. Nowadays once Teddy wakes up he goes out to pee and then promptly runs back upstairs into bed and shuts his eyes. It's like him saying, "Please don't make me come out on a walk with you" as if the walks were for Mr NQN's benefit. Teddy was always one to find the warmest and softest spot in the house. 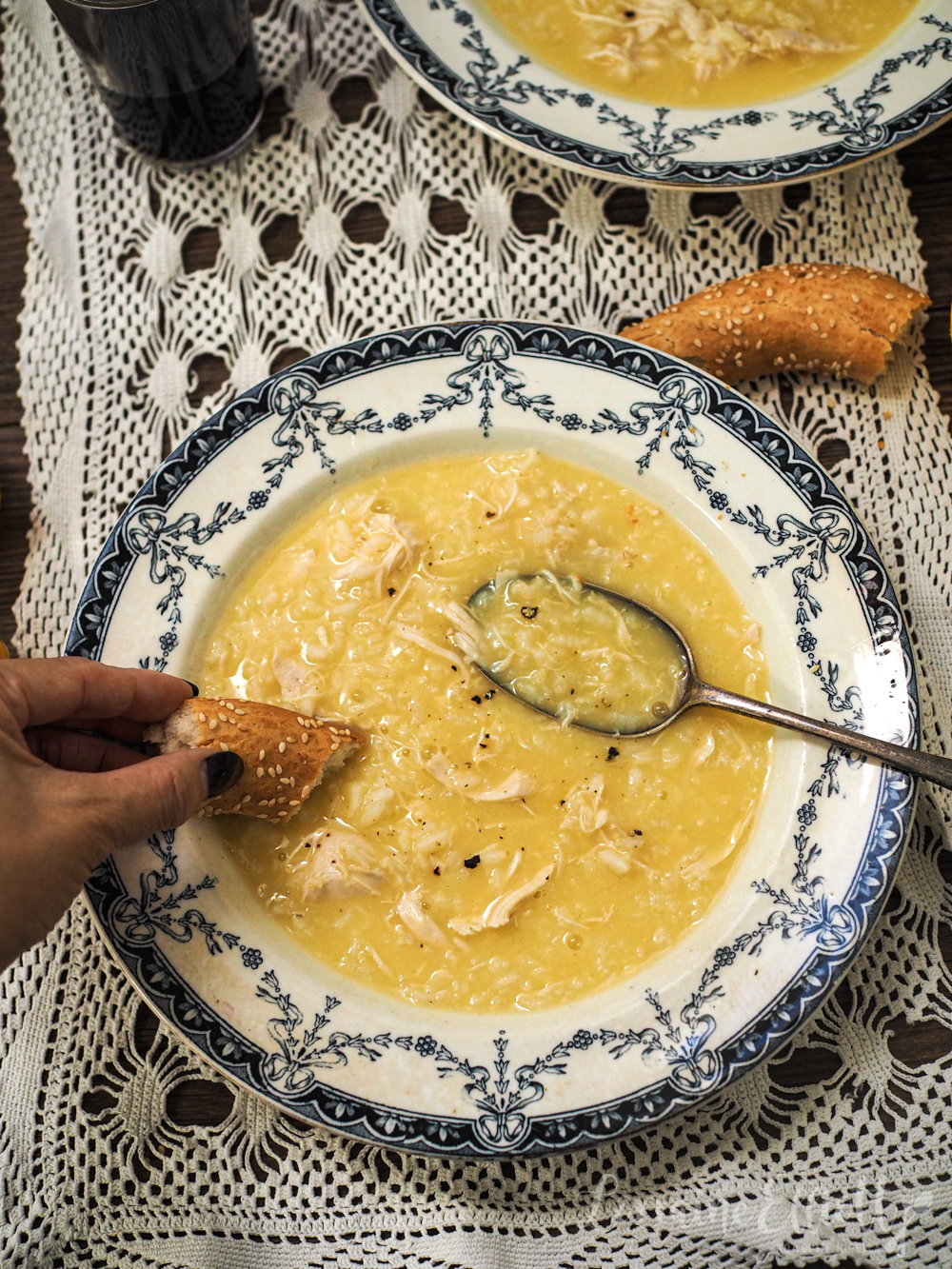 Now during the day he won't sit beside Mr NQN in his office. Instead he will spend hours outside sniffing the air and roaming the garden and patrolling for cats. Occasionally he will erupt into barking perhaps when he spots a cat. When he's ready to come back in he sits patiently by the door and may let out one little bark if he has waited too long to let us know that he'd like to come back in. We've actually wondered whether we should get a doggy door installed for him to come and go. Any tips or recommendations about this are welcome! 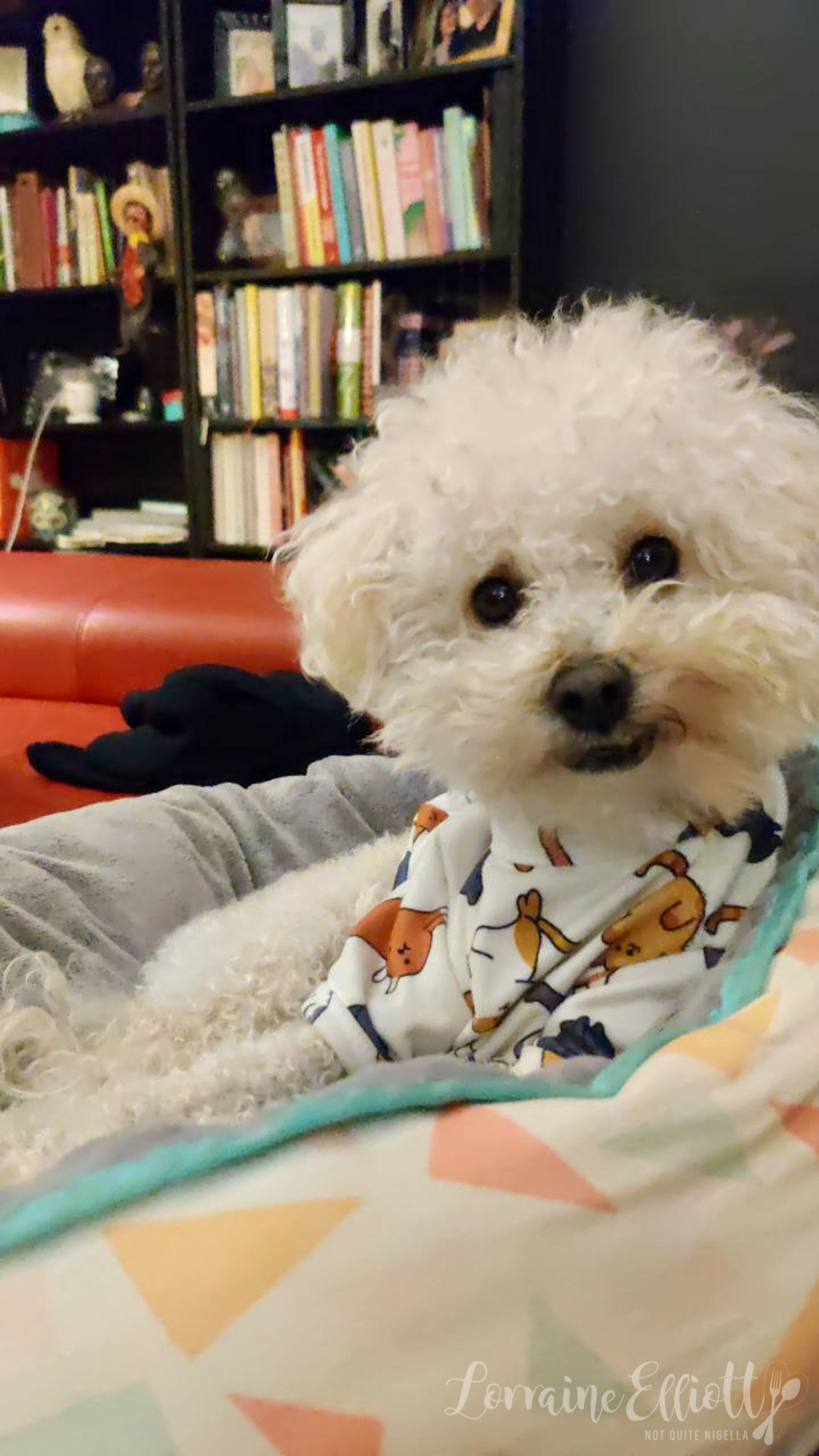 So tell me Dear Reader, do you like Avgolemono soup? Do you have any tips re dog doors? 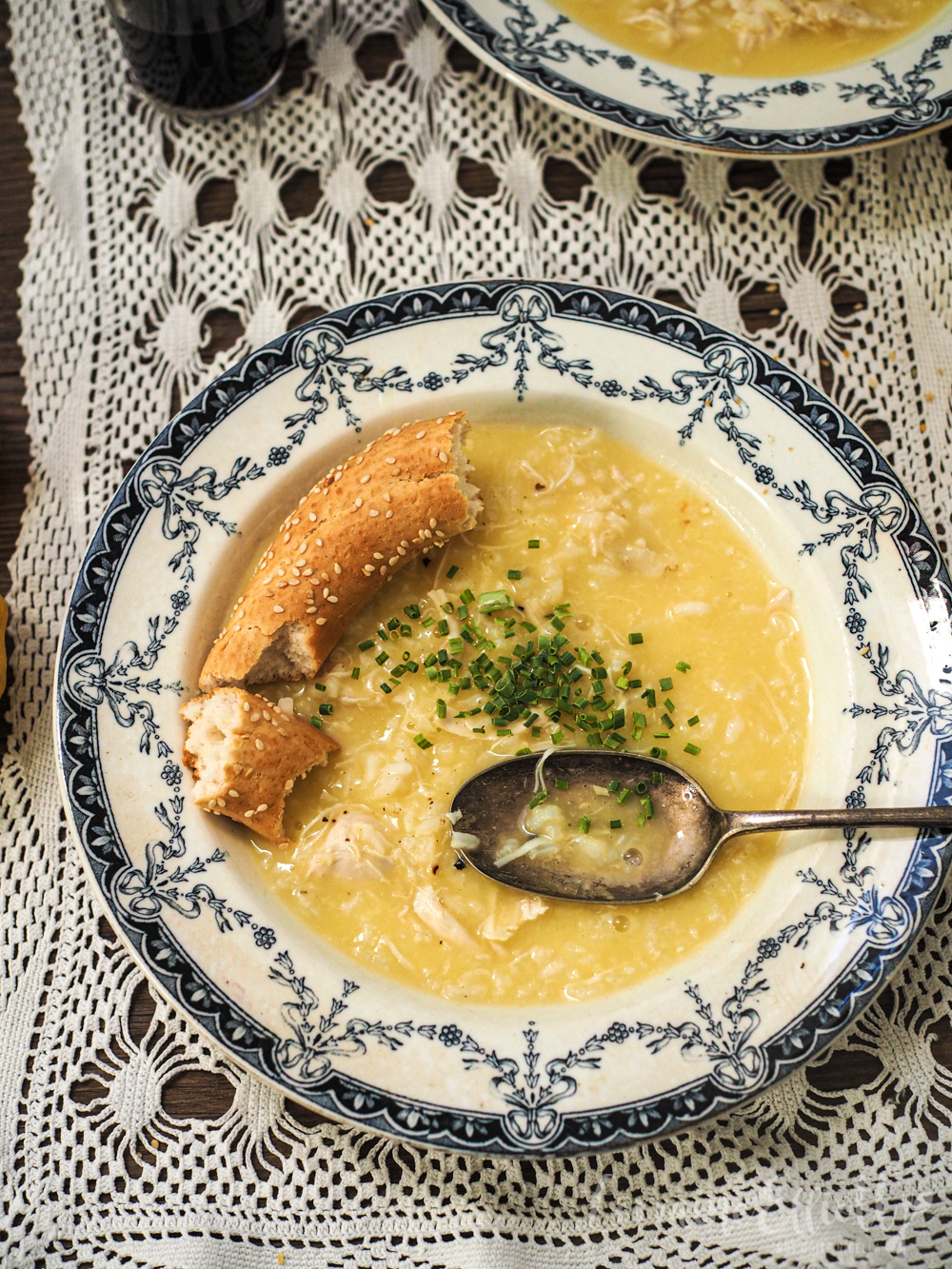 Step 1 - First heat up the chicken stock in a large pot and add the chicken tenderloins, lemon zest and bay leaves and cook for 5 minutes. Add the rice and simmer for 30 minutes stirring occasionally so that rice doesn't catch on the bottom of the pot. Remove from heat and allow to cool for 10 minutes. Shred the chicken with two forks - it should come apart easily. 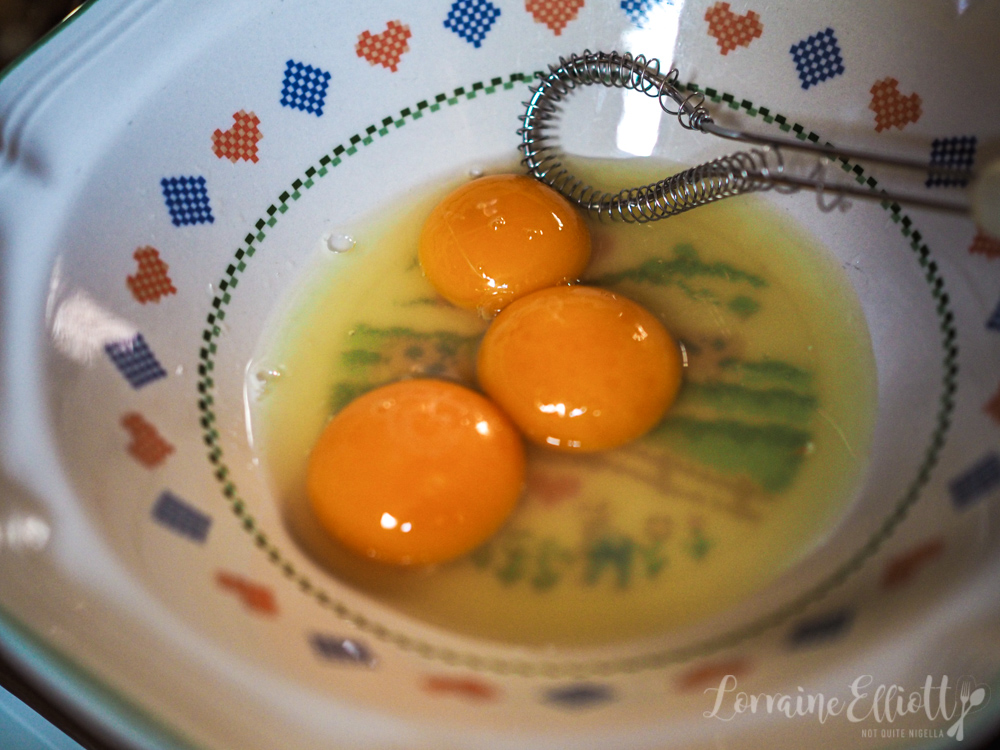 Step 2 - Whisk the egg yolks and lemon juice in a bowl or jug. Add 1/2 cup of the chicken soup to the yolk mixture and stir to temper the eggs. Add this tempered egg mixture to the soup and stir through letting the residual heat cook the yolks through (do not reboil). Remove bay leaf and add seasoning to taste and serve. 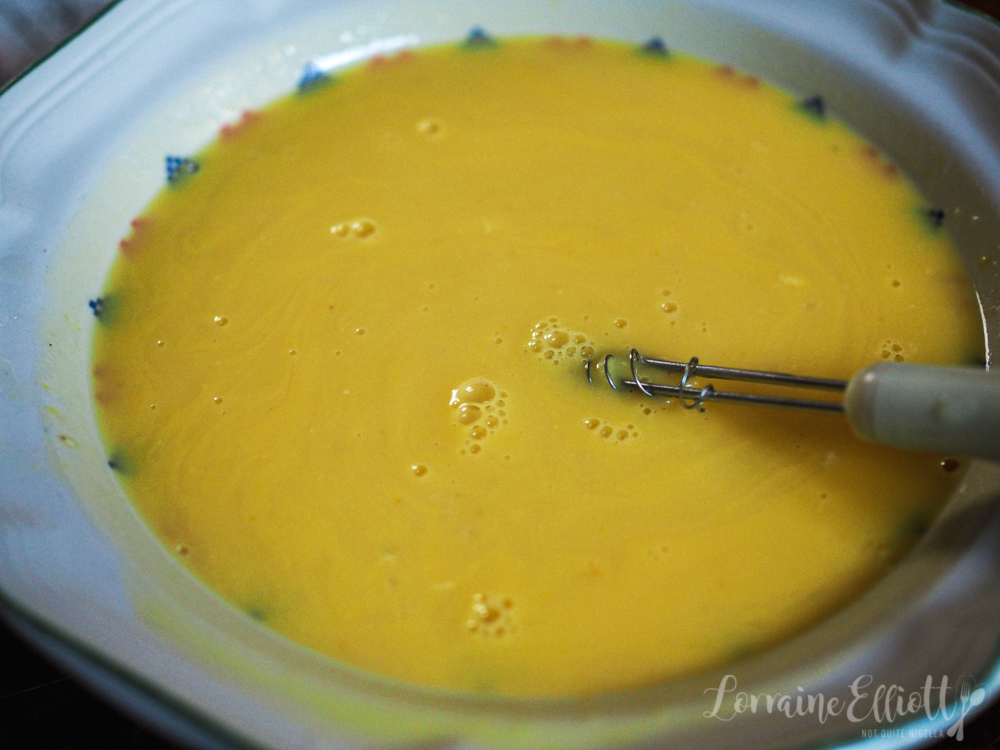 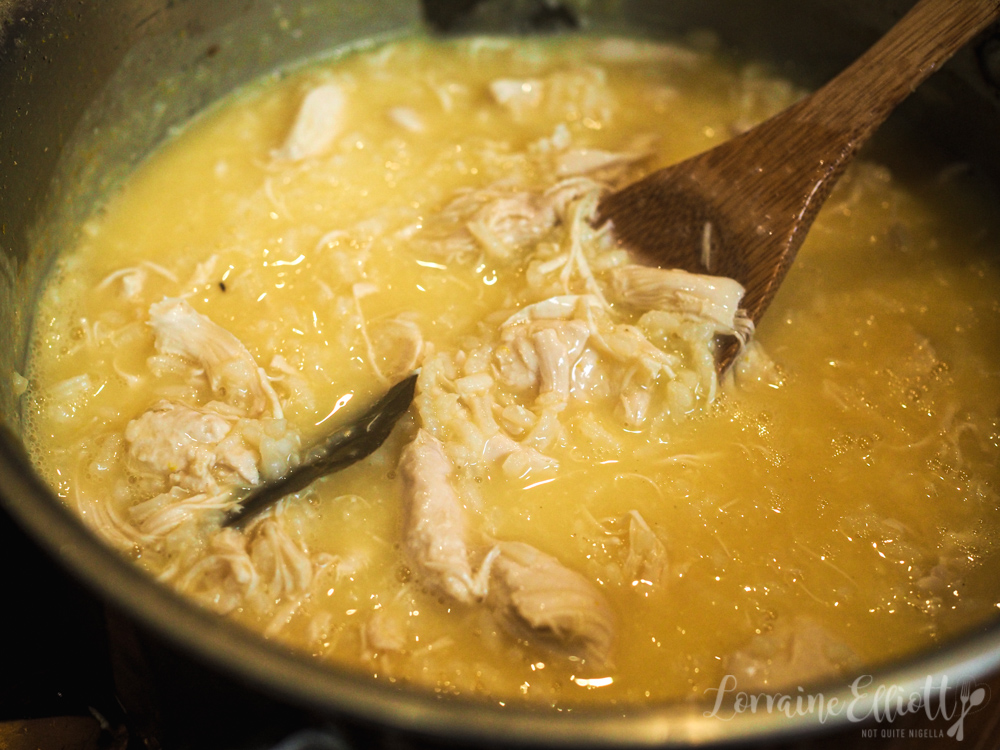 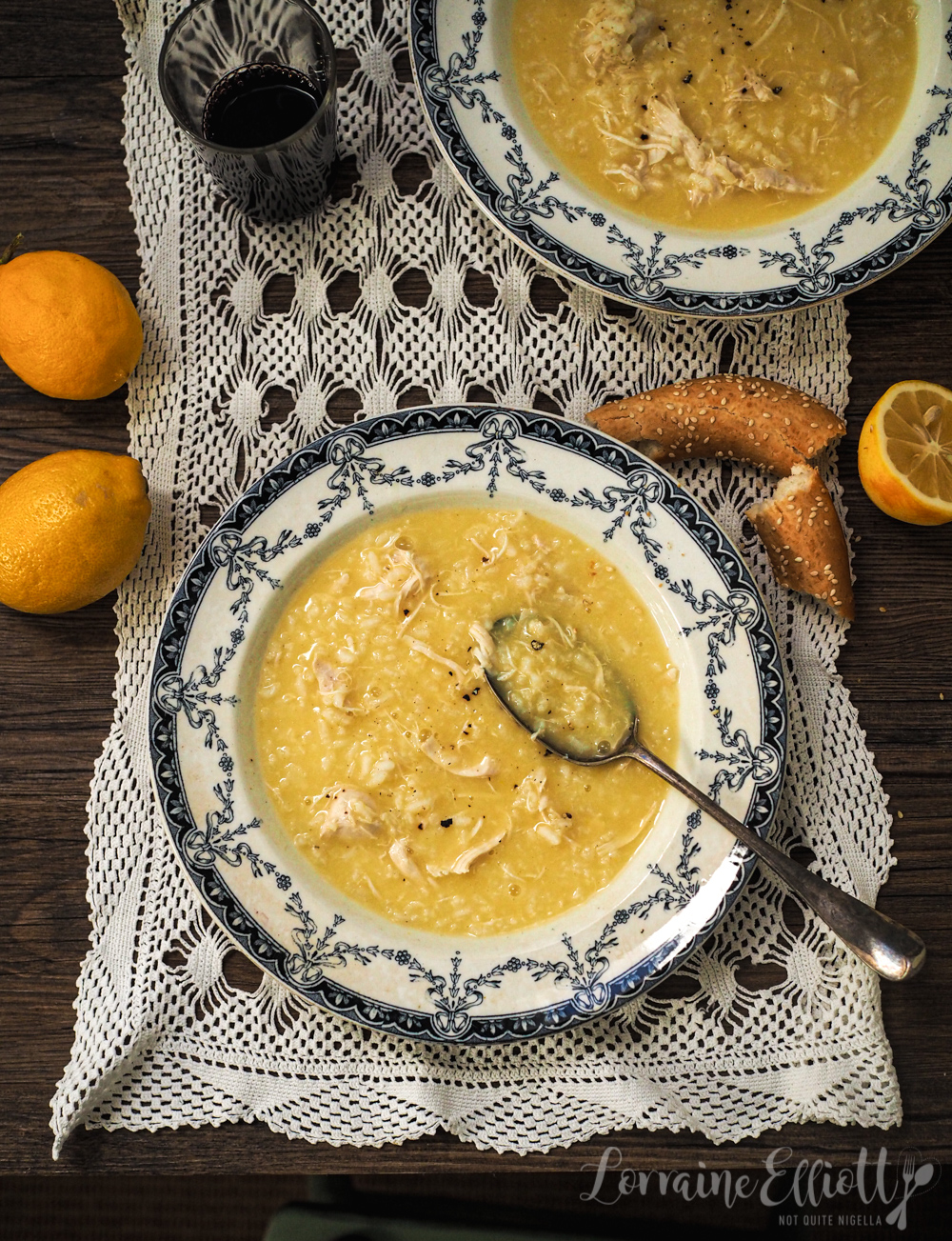