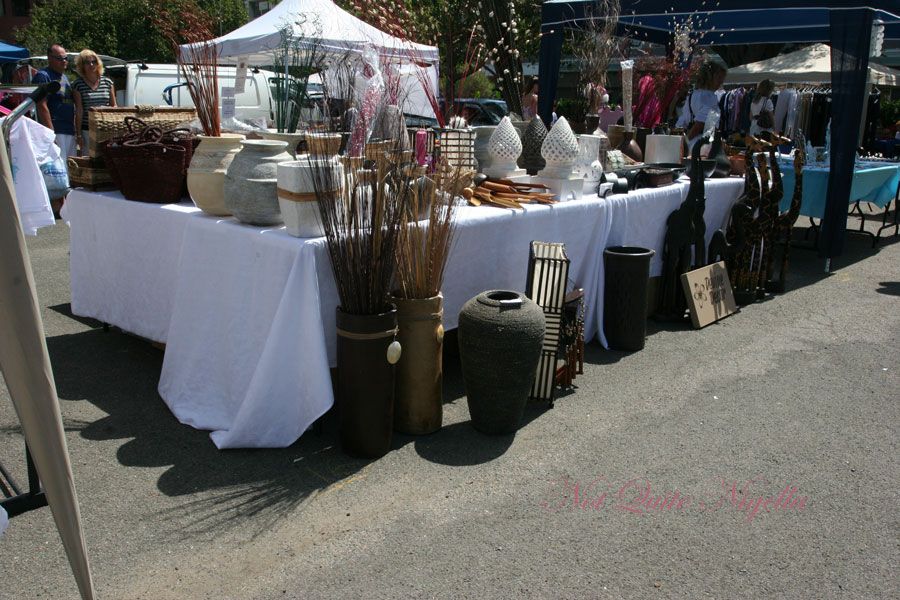 On a Saturday afternoon there are few other places I'd rather be than browsing through a market near Manly beach. I'd previously been to Manly's touristy Art and Craft market just off the Corso and was not particularly impressed by the goods on offer but when my mother in law told me that the _real _Manly Village Public School markets are much better and quite like Kirribilli its immediately put on the calendar. I asked her about the food but as someone who is rather disinterested in food, she can't tell me much about the selection on offer.

Sprawled across Manly Public School's grounds, the markets are deceptively large. It consists mostly of stalls with second hand goodies, some new items, children's clothes, furniture and assorted bric a brac. The prices are incredibly cheap for the most part. In fact I am five minutes too late to snap up a beautiful wooden antique dressing table and stool for a princely sum of $50 much to my chagrin! 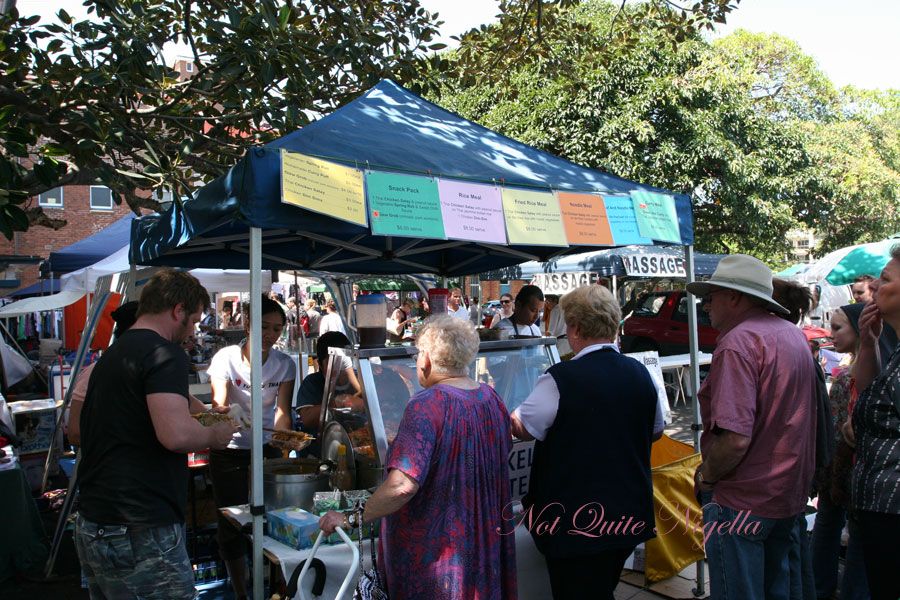 But I move onto the important part: the food. The food section is in a little corner of the market and comprises of three stalls, a well packed Thai stall with long queues and eager patrons waiting to purchase noodles, satay and curry puffs. There is also a cake, ice cream and coffee stall called "Piccolo". 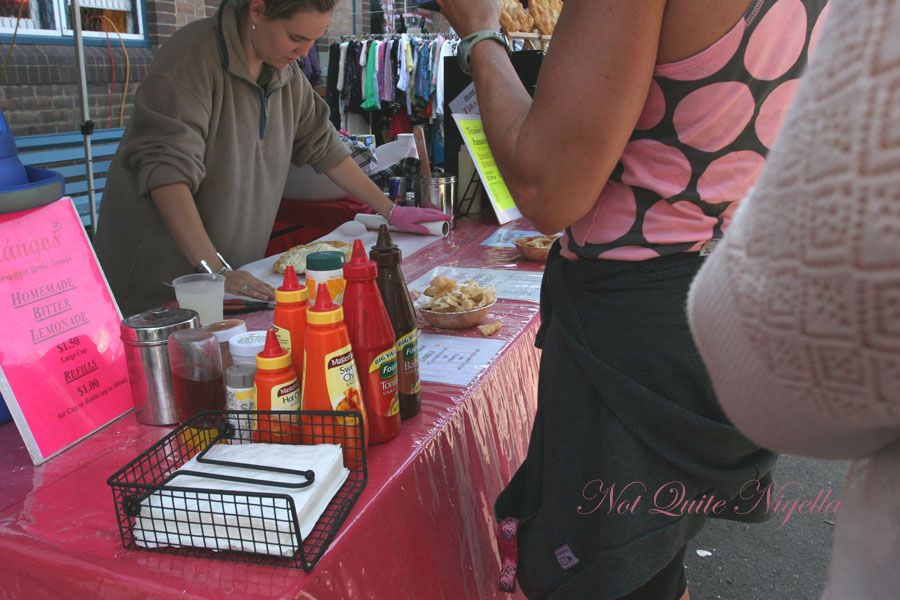 Next to that is what I found was to be serendipitous surprise, a Hungarian stall featuring an item called Lángos. At first, it doesn't look that interesting, just like deep fried bread but after trying the samples of the sugar dusted Lángos and the garlic Lángos at the front, all plans of eating from the other stalls are abandoned. They're heavenly and choosing one is quite the dilemma. 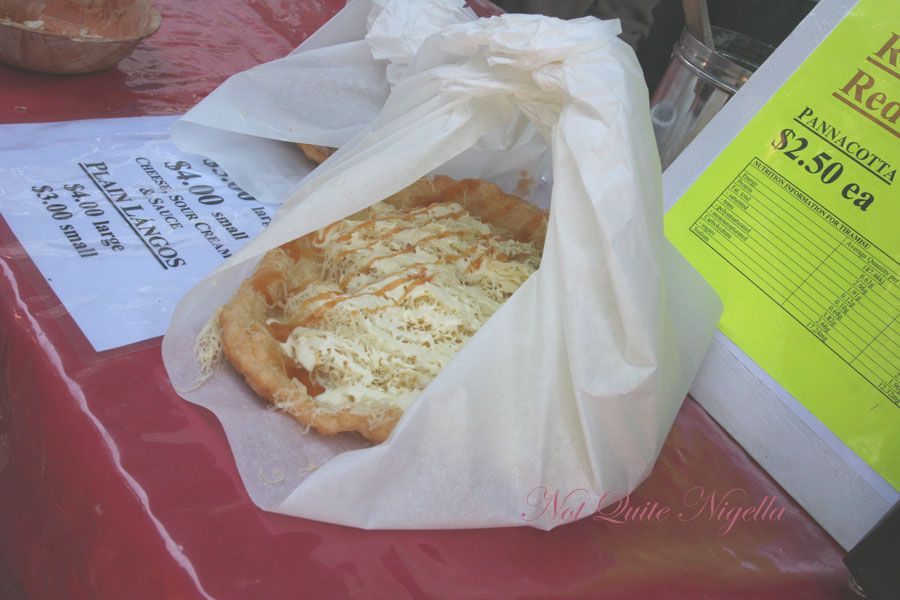 The stall keepers are very friendly and charming and patient when it comes to my never-ending decision making. They take our order of one savoury Lángos with the works (garlic, cheese, sour cream and sauce of choice), $5 for a large, and a small cinnamon sugar small one for $3.50. There's also homemade bitter lemonade for $1.50 a cup or $1 for a refill and homemade Panacotta and Tiramisu in a small fridge for $2.50-$3 a cup. Alas they've run out of cups but I would've tried the bitter Hungarian lemonade. 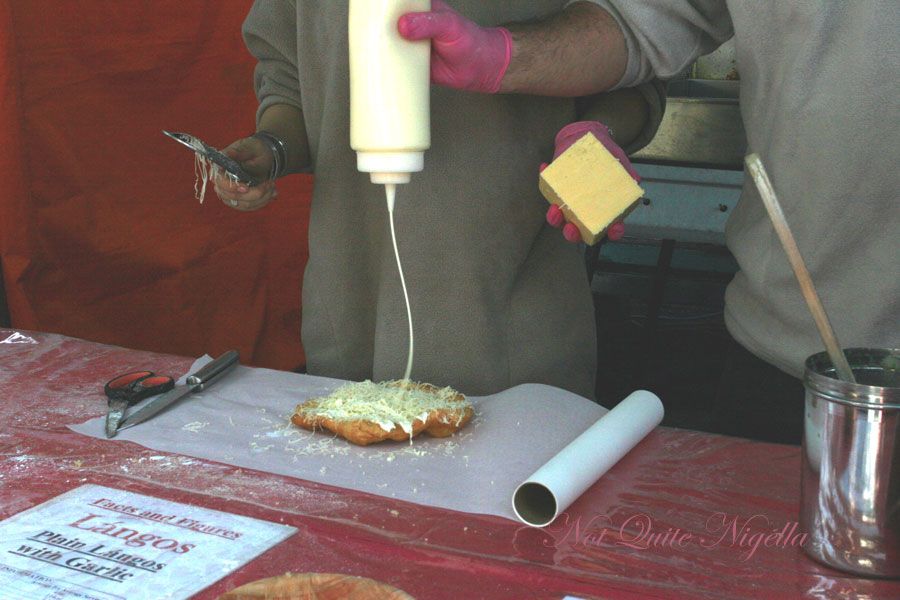 They're cooked to order which is how deep fried food really should be. A couple of minutes later our Lángos artist is grating cheese and drizzling sour cream on ours and we're very glad to see that they're generous with the toppings. We ask for Sweet chili on one half so we can see how it would taste with and without it. Its hot and fresh and we're off to find somewhere to sit and have lunch. 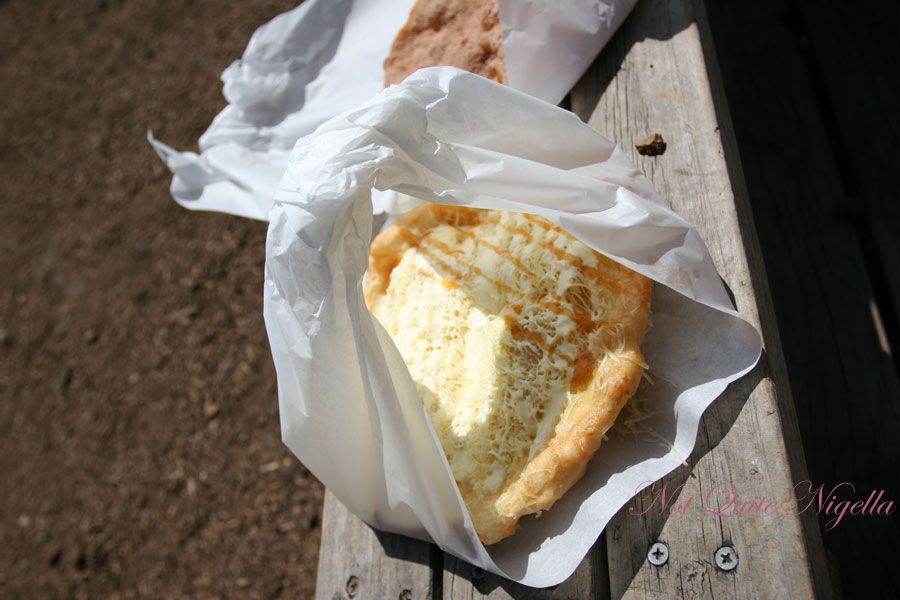 We sit down with our piping hot and crispy handled parcels and tear apart the soft garlic scented pastry. Unlike the chinese deep fried bread that I've had, the Lángos is incredibly crisp and light and in some sort of cooking miracle, there is no greasy taste whatsoever. 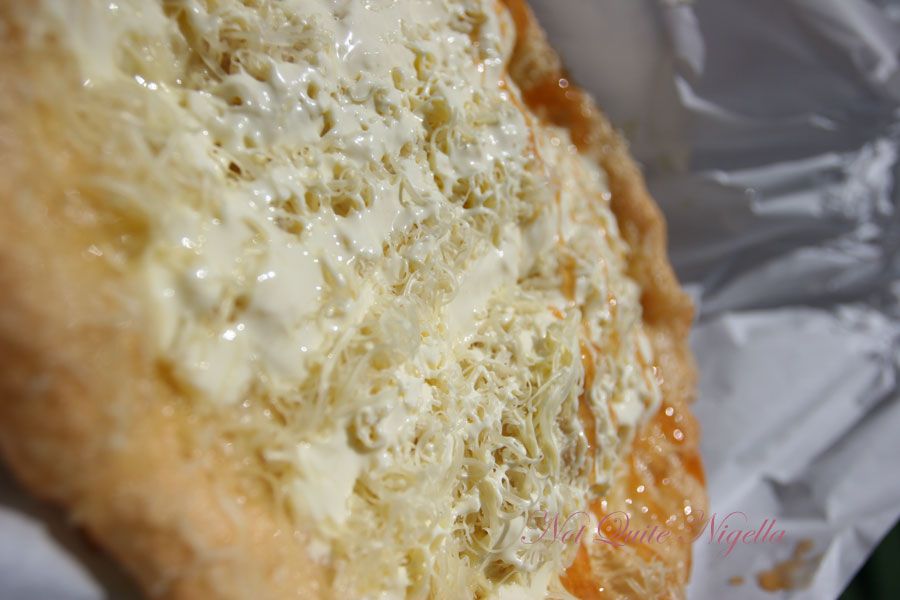 Its absolutely delicious, the pastry delightfully crispy and feather light and when the grated cheese, garlic, sour cream and sweet chili combines with the light crispy pastry it gives it that indulgently creamy collapsing sensation when you bite into it. My husband, not a fan of deep fried foods is instantly smitten. We don't talk while eating it except moans of "Mmmm good, soo good". Which half was better? The one with sweet chili or the one without? I couldn't decide, in fact, the only thing we had decided was that we're coming back next month to get the exact same half/half Lángos. 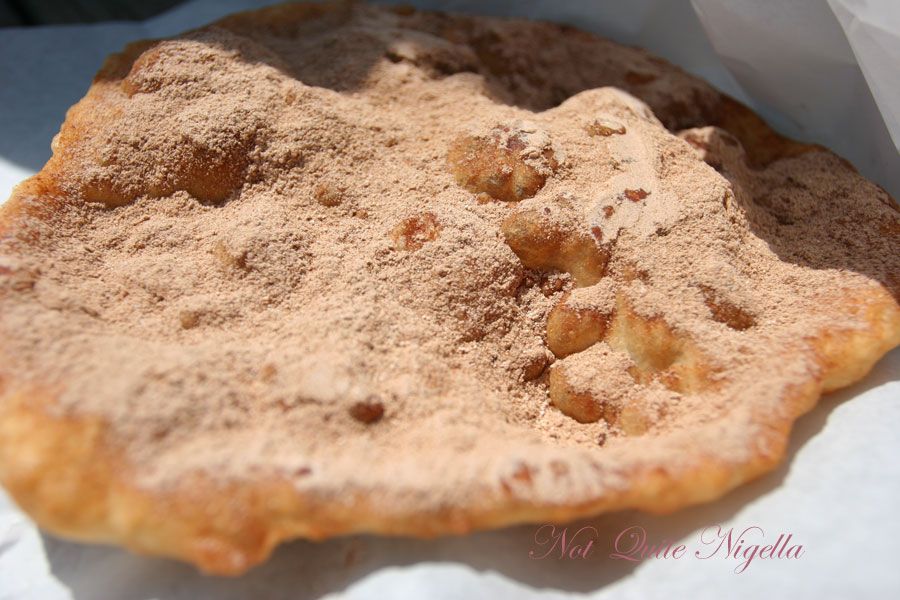 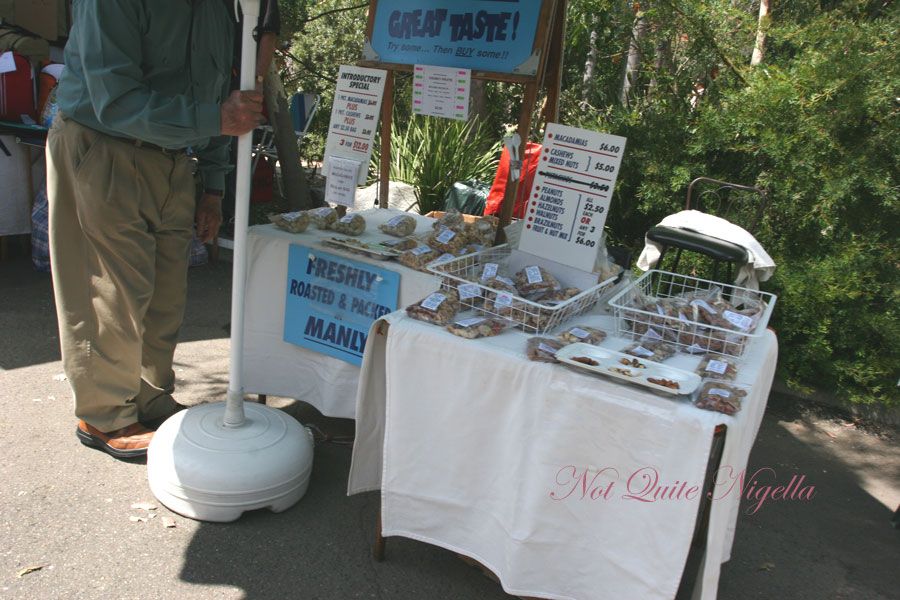 A few purchases here and there at other vintage stalls and we're happy little campers, full of gloriously good pastry and cheap bargains. 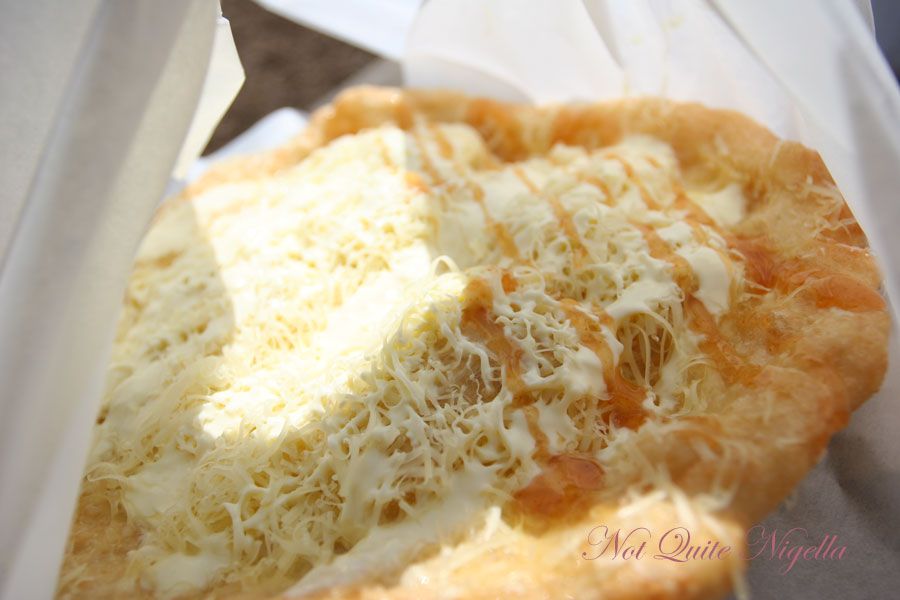 Third Saturday of each month 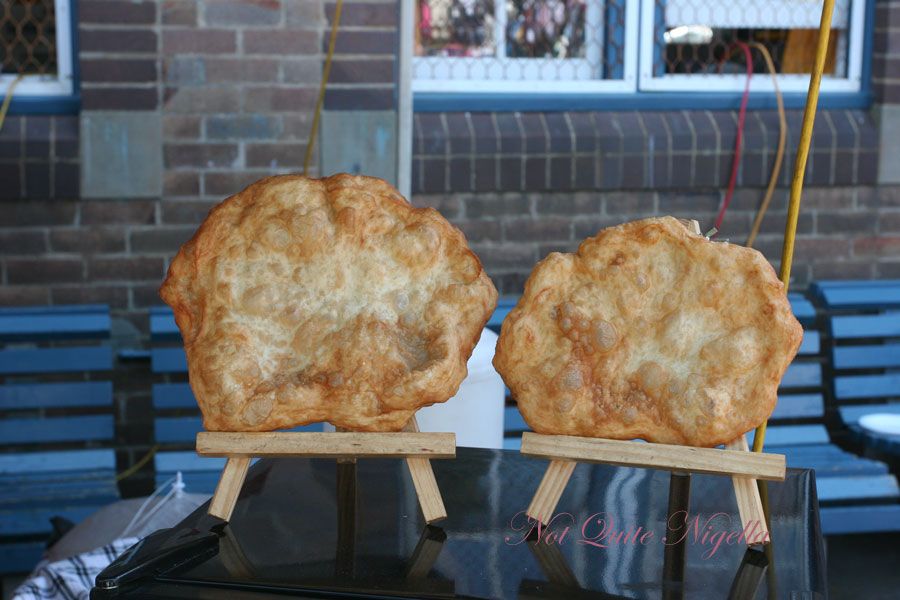 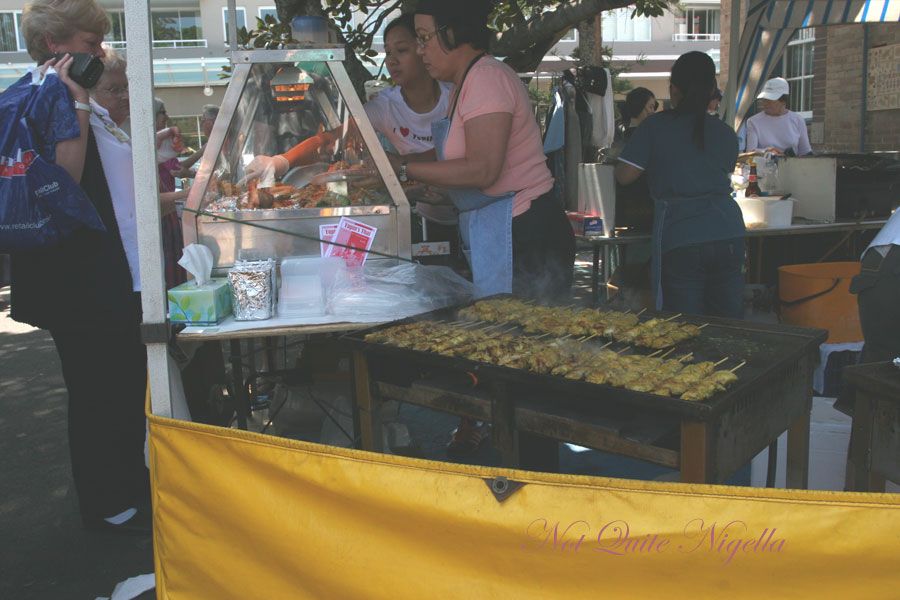 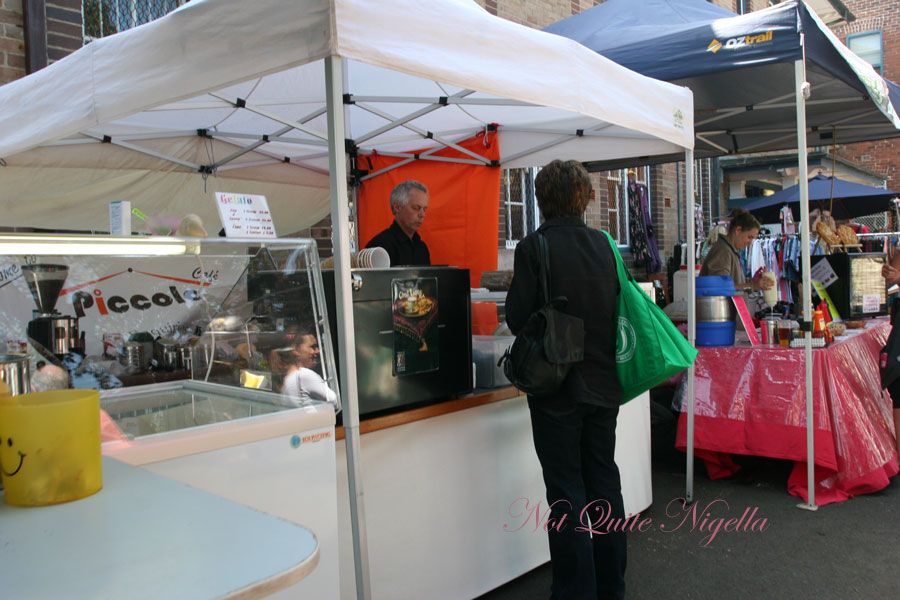