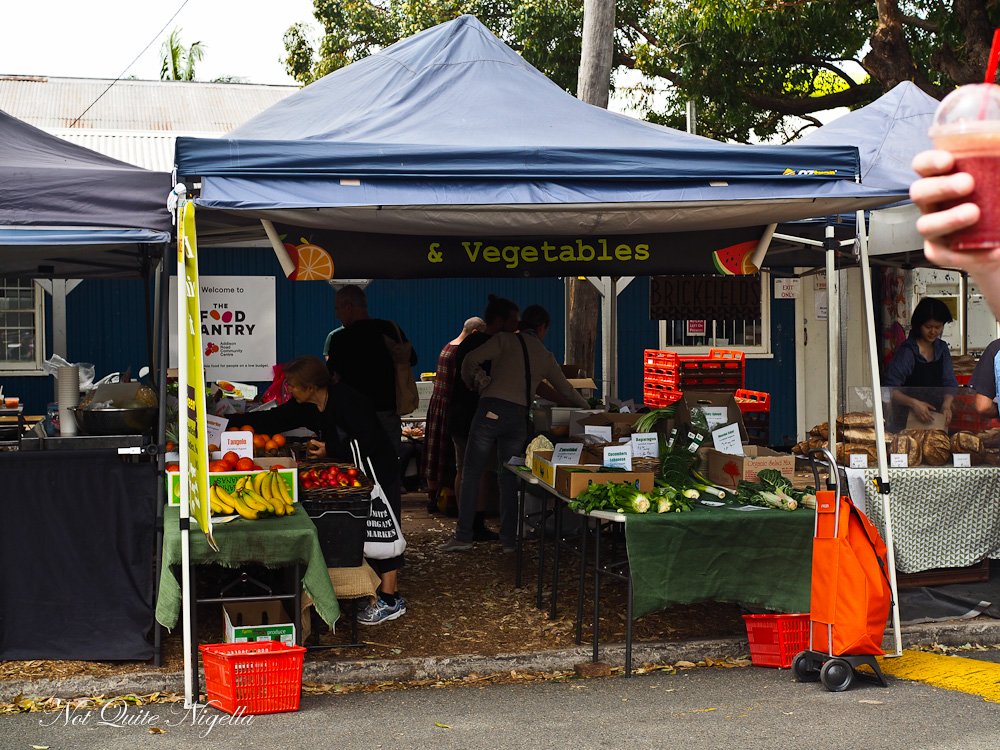 Weekends are perfect to do some market shopping especially at Marrickville Organic Markets located on Addison Street. A range of traders offer everything up from the freshest vegetables (with some great deals) including hard to find heirloom vegetables, bread, pastries, cheeses, fish and meat as well as delicious ready to eat foods to take from award winning pies to Syrian food. 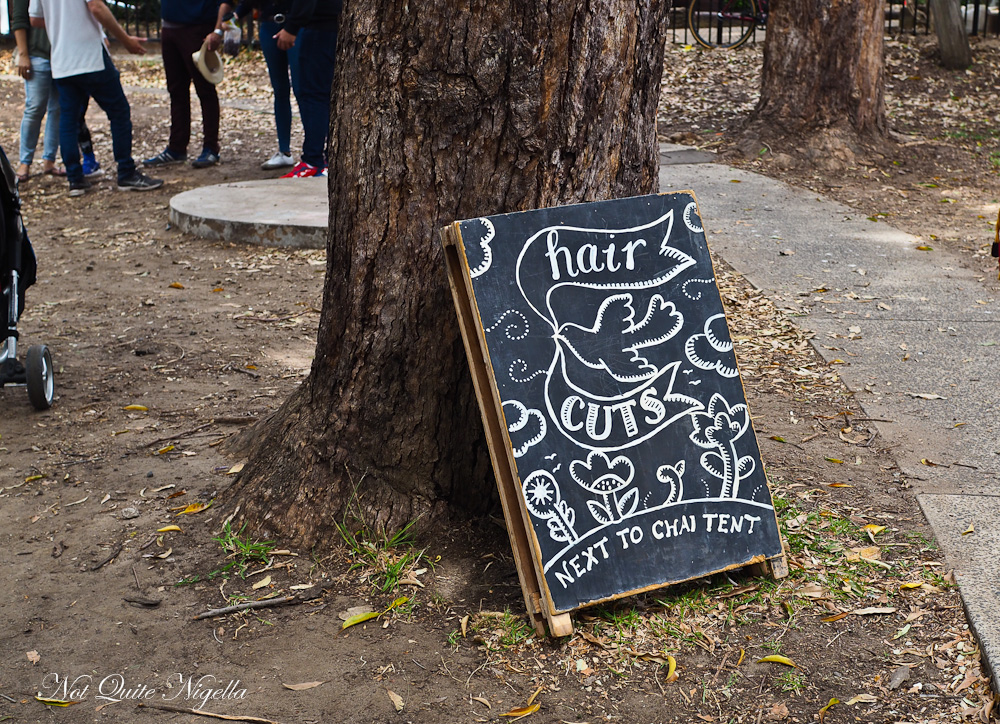 I first visited here when I was researching a place for an article I was writing on vegan food. I was so surprised at how busy it was and how many people walked past me carrying trays of eggs and vegetables, discussing what they were going to make with them. I could have sworn that it was like an advertisement for these markets. 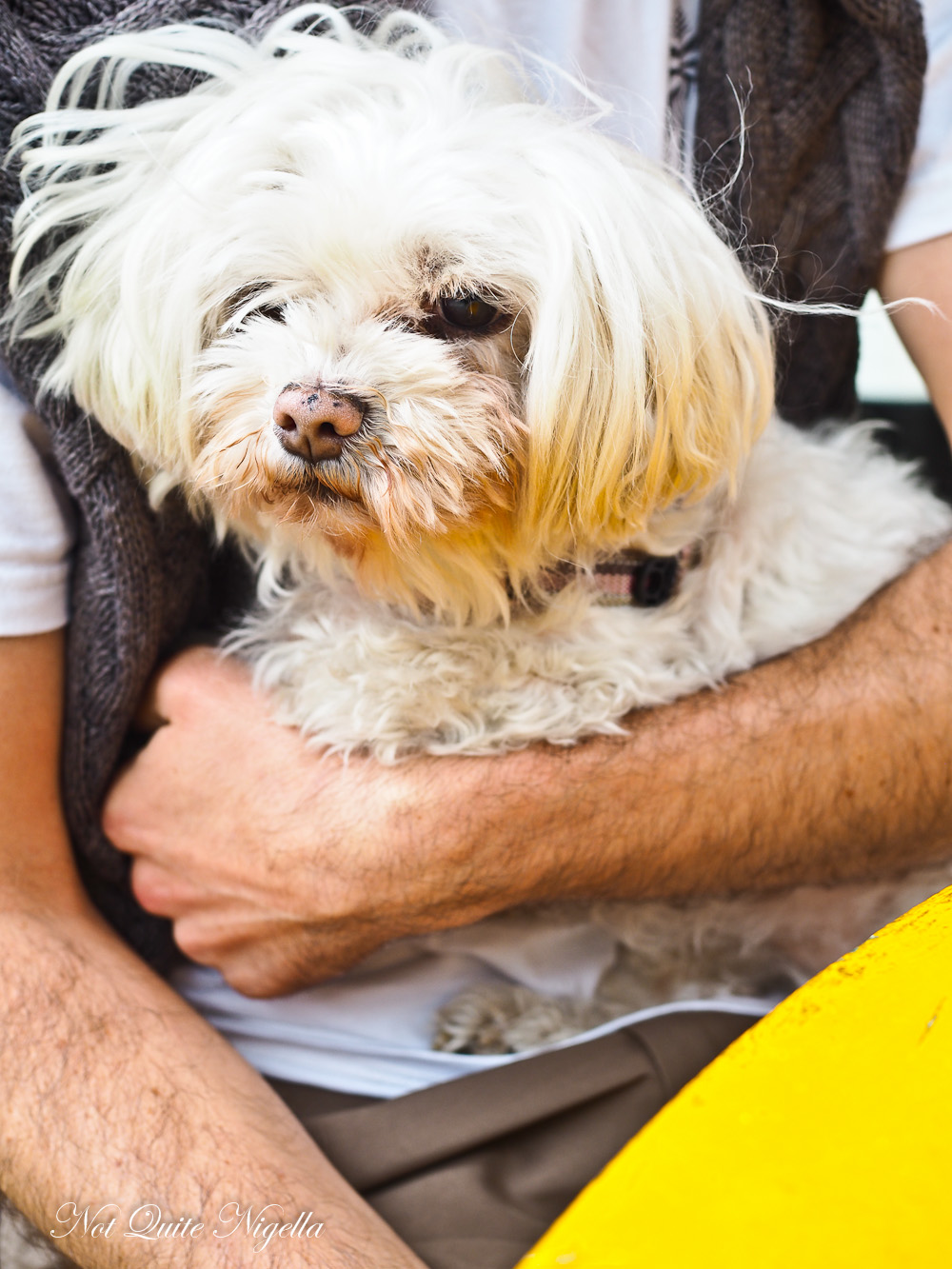 The market goes until around 2-3pm so you don't have to get up at the crack of dawn. It's very busy so if you take your dog you may have to carry it or tie it up somewhere because the walkway is narrow and busy. 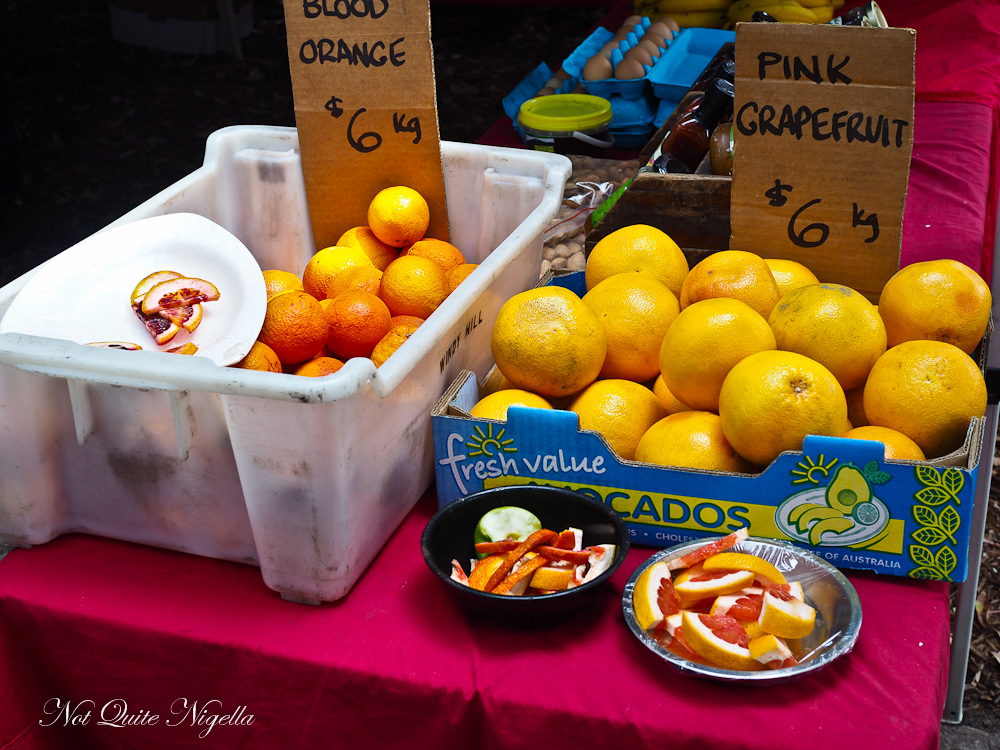 It can also be tricky to park there. I also recommend bringing a market basket or a big bag because you may end up buying a lot (we bought three bags' worth). But if you forget to bring a bag, you can probably find one at the Reverse Garbage adjacent to the markets. 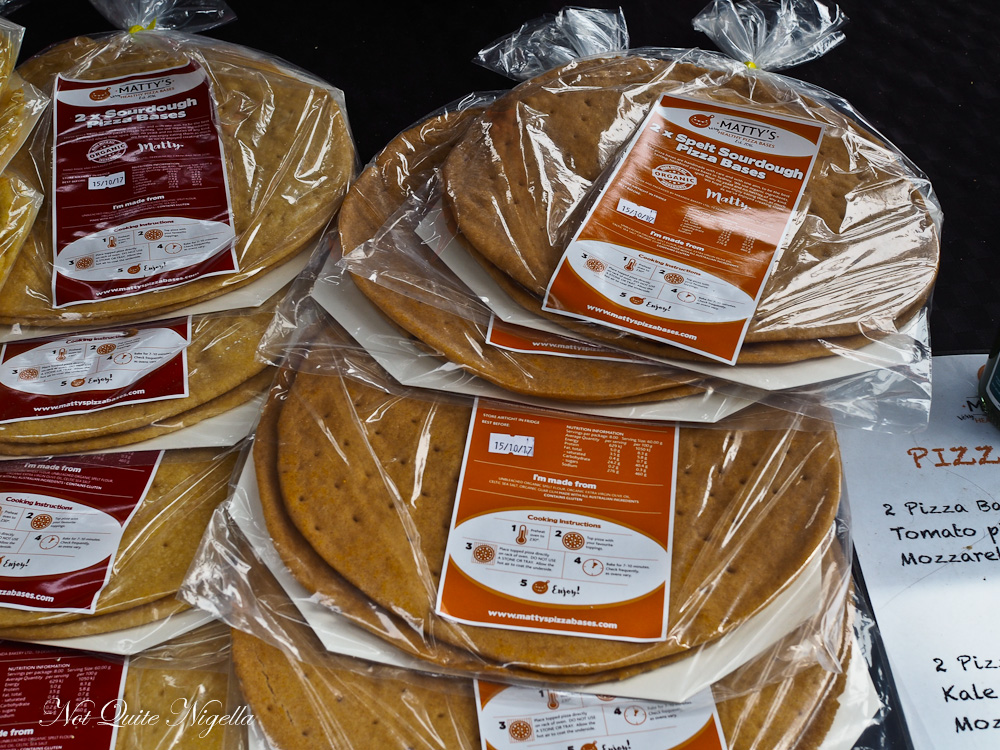 Many of the products can be sampled and our first sample is a purchase for Louise and Viggo - spelt sourdough pizza bases that are crisp and delicious. Blood oranges are in season and there are a few stalls selling these. 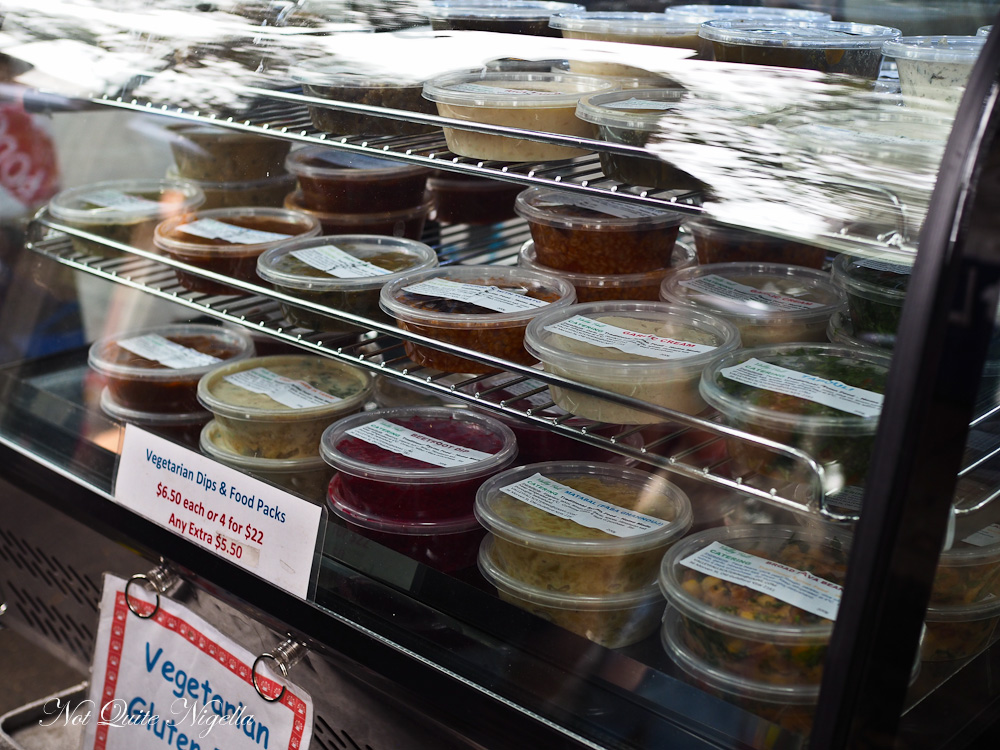 We stop at the Valley Falls Syrian food stall. They are generous with the samples as as a result we buy two items each. The garlic cream is smooth and quite additive (not fluffy like toum but same flavour) and I also like the Rice Mojadara. Louise goes for the Syrian hummus and another dip. 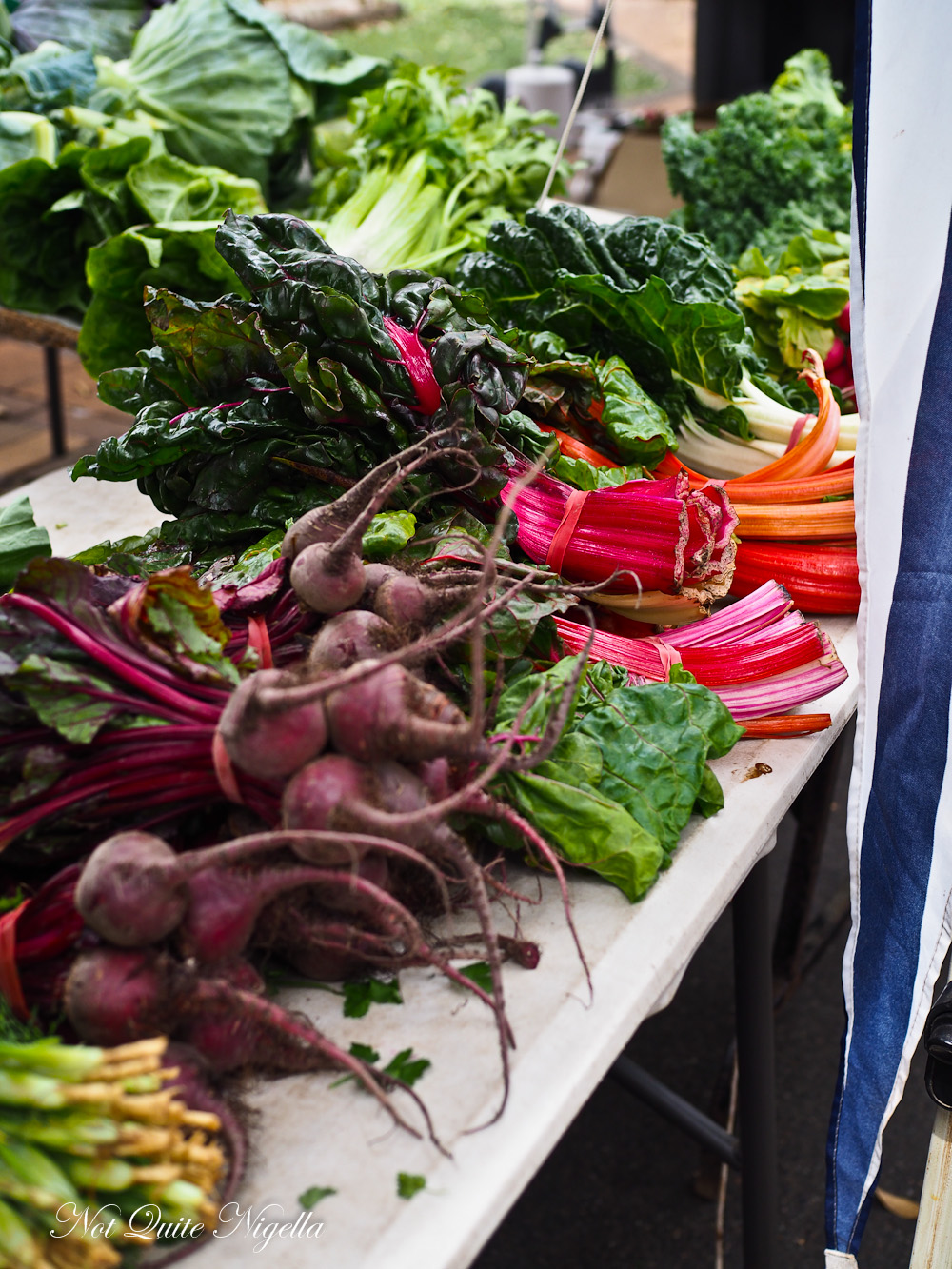 I stop by at a stall with colourful vegetables and buy a bunch of rhubarb and rainbow chard. I end up making rainbow chard wraps with the colourful stalks and large leaves. 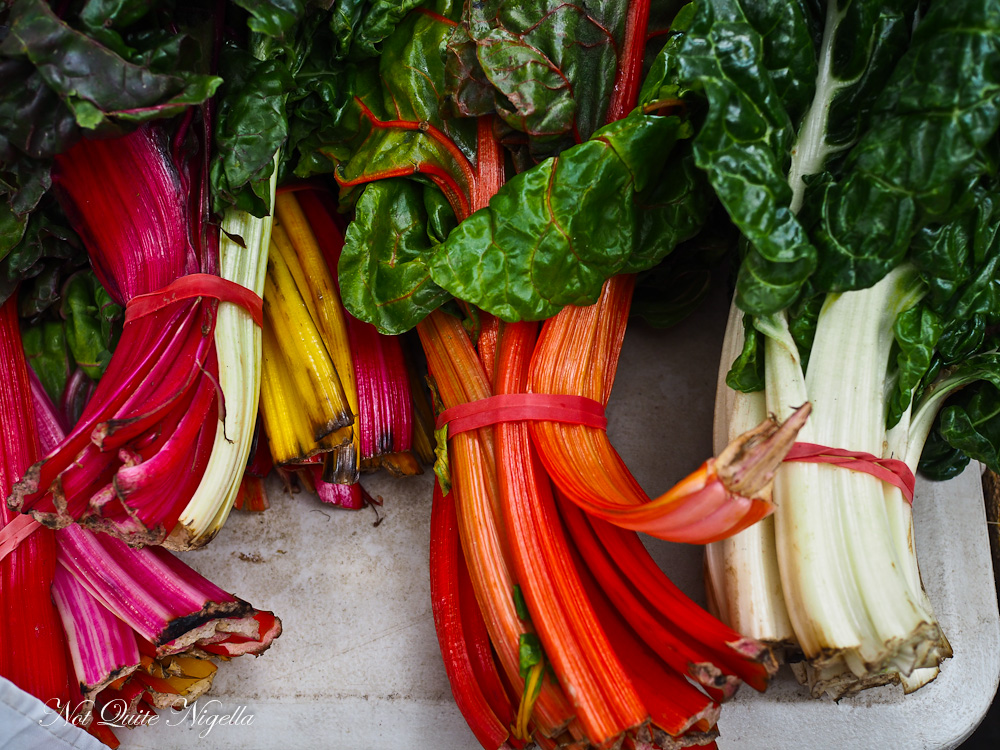 Then we snatch up a bargain at another stall has a great deal-a bunch of radishes and a large bunch of wild rocket for $3. 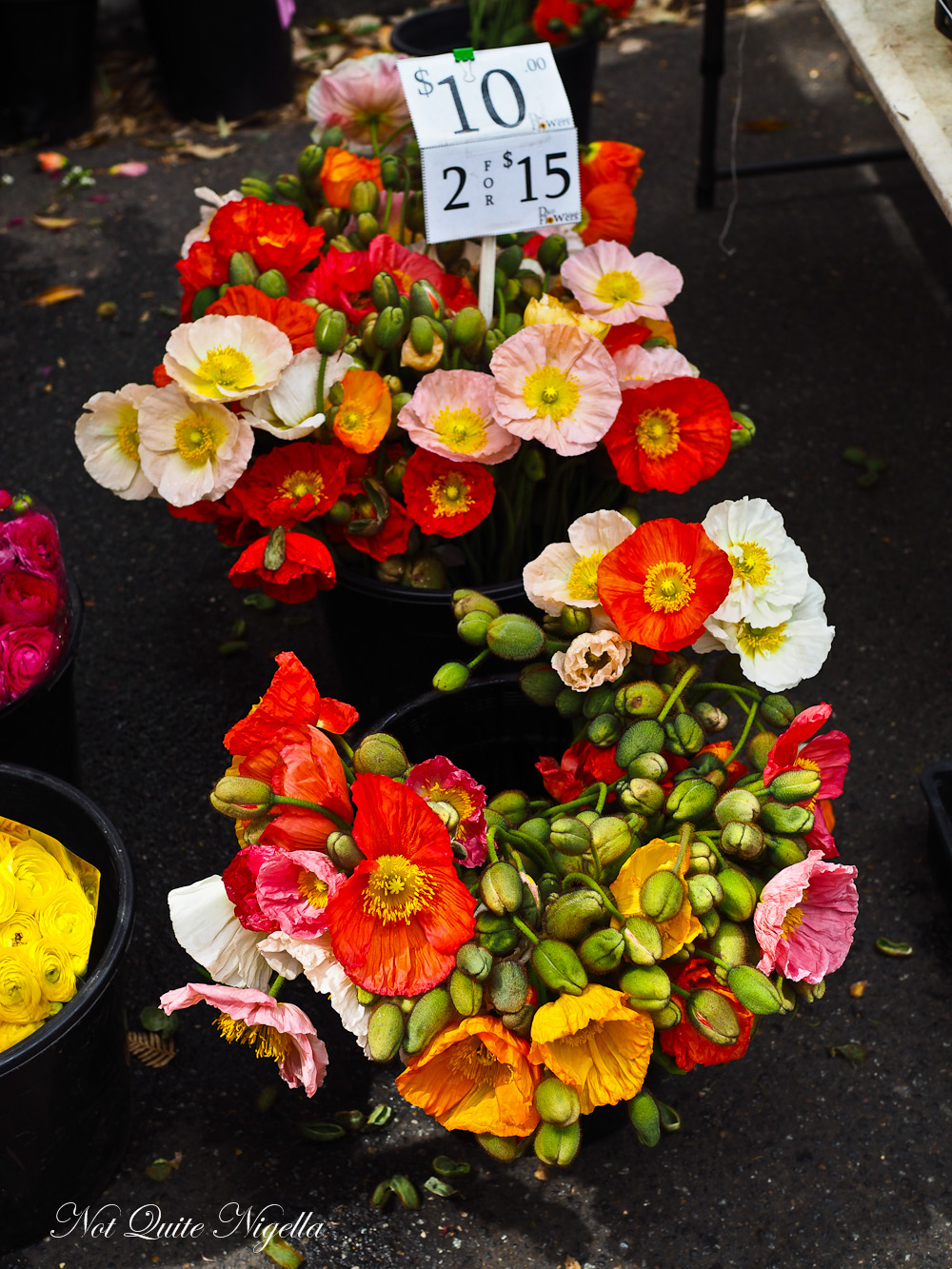 Our tummies are rumbling and Viggo points out a pie stand called Broomfields. He bought one of their pies from them in Manly and loved it so we sample one pie and then buy three. 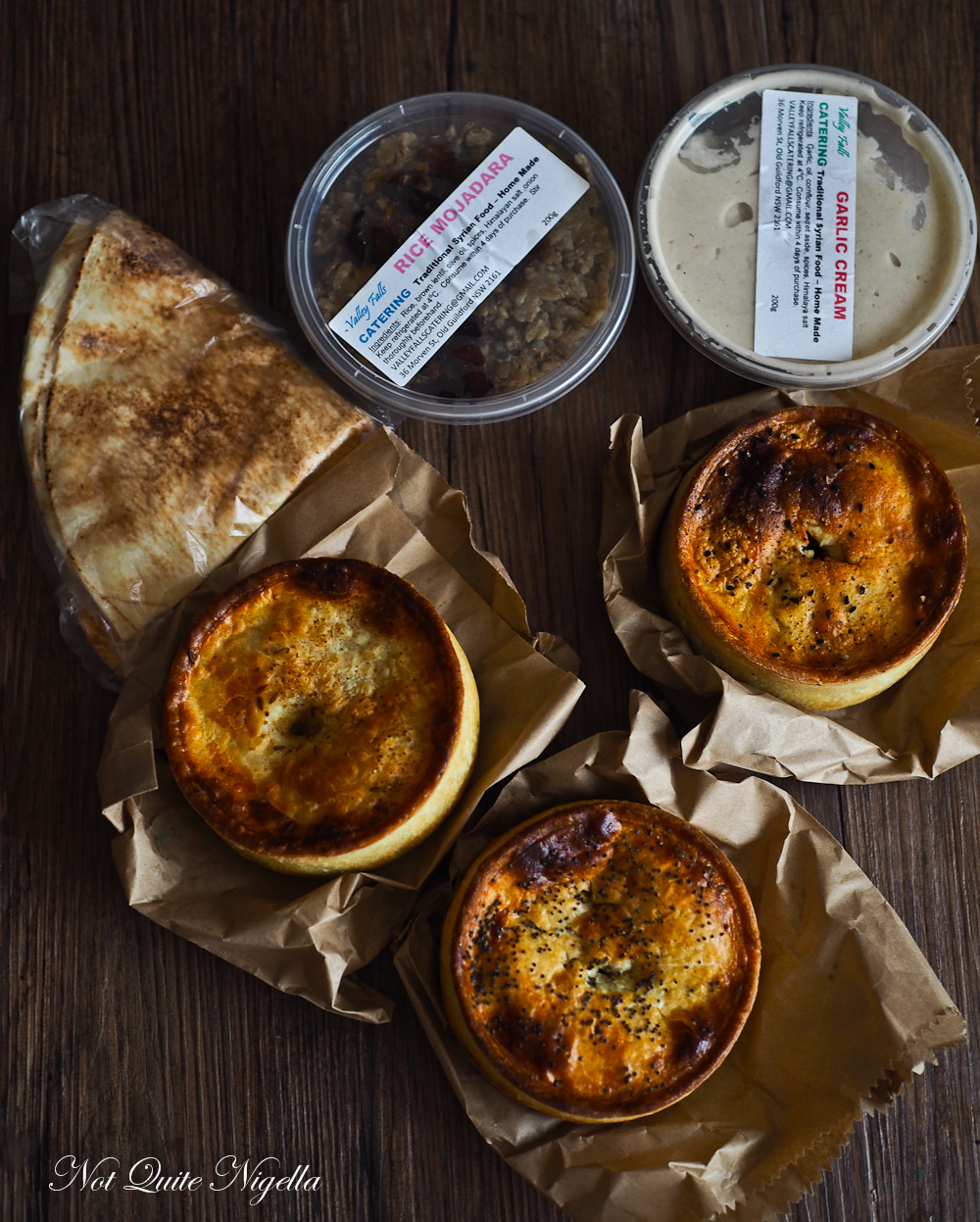 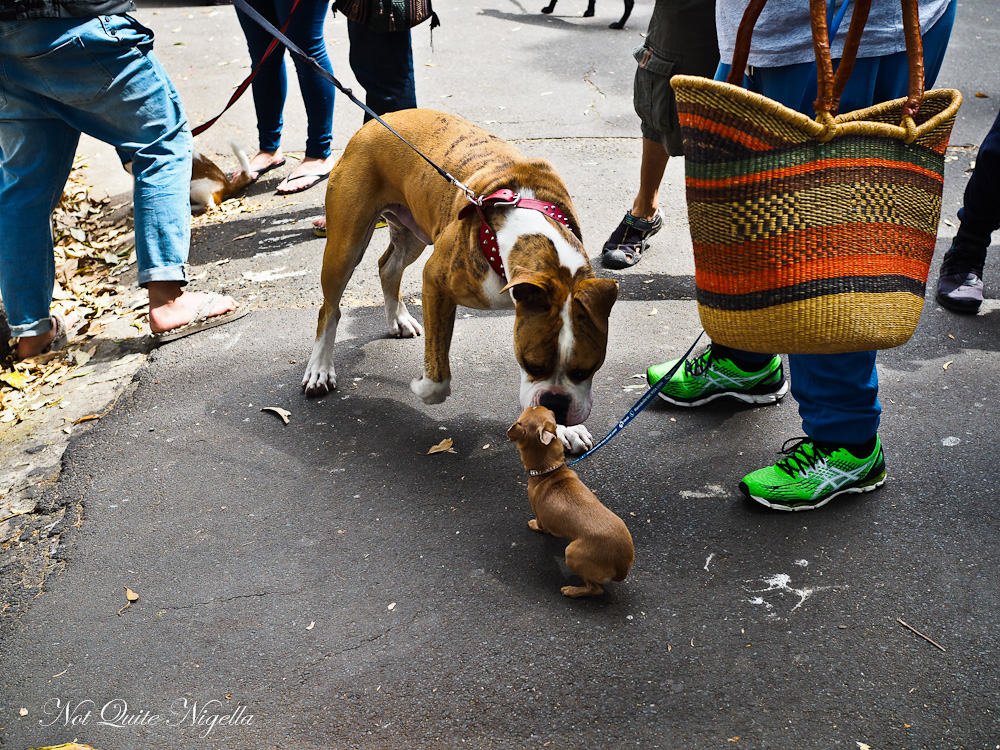 Another stop yields black radishes, onion flowers and watermelon radishes. By now we are hungry with all of the smells wafting by us. The boys grab a table with Mochi while Louise and I grab some lunch to share. 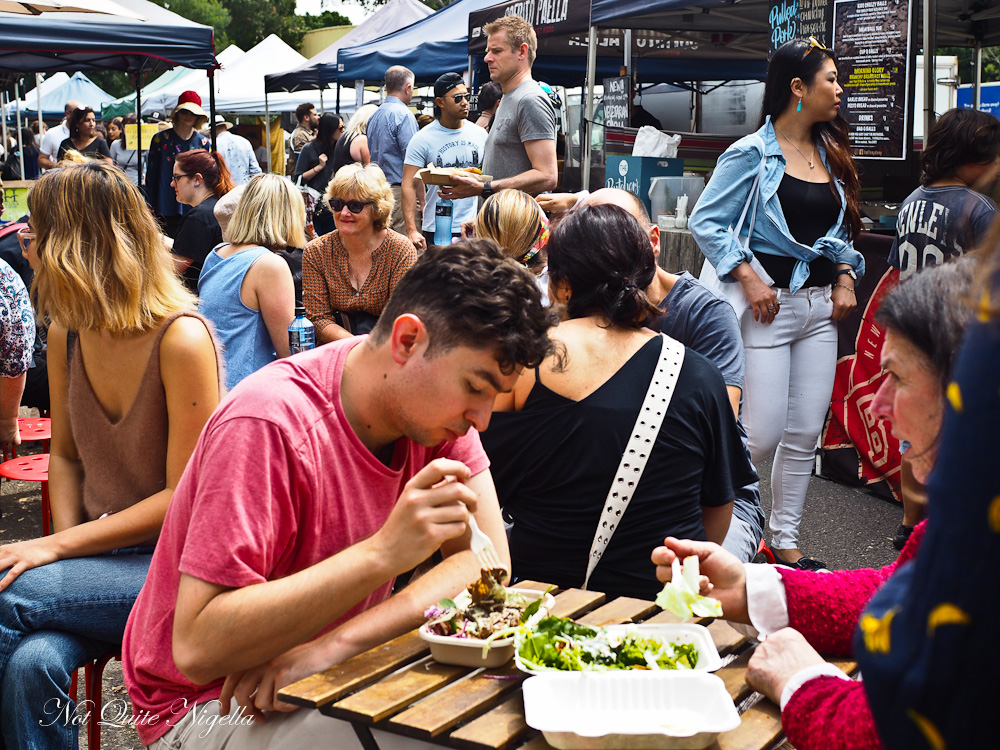 We try a vegan toastie with a side of bacon jam (just because) which is actually quite nice. It's made with cashew cheese although Viggo isn't so much of a fan as we didn't tell him it was vegan. We all really like the Morning Glory balls from the Balls stand which is a quinoa and salad base with a rich tomato sauce and juicy meatballs with plenty of cheese and a fried egg on top. 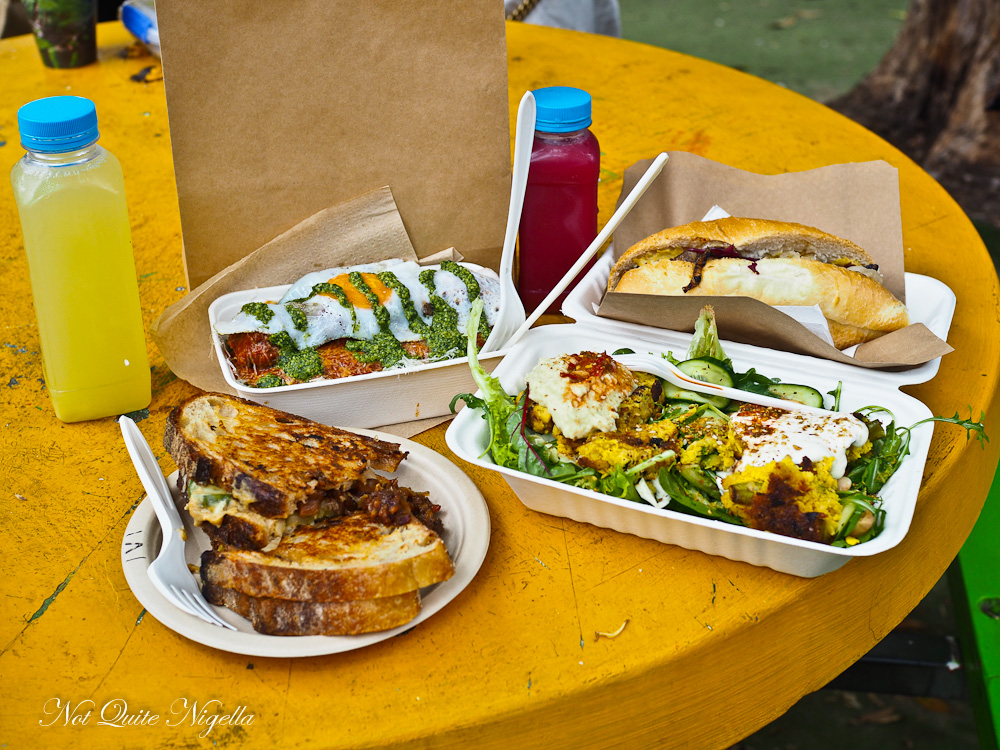 The vegan food is made up of fritters on salad. It needs the sauce to boost the flavour but it isn't bad. The only disappointment is the German roll which tastes mostly of red cabbage and onion without much pork. And while the juices were fine but quite pricey, the most refreshing was the Herbs of Life hibiscus Kombucha on tap. 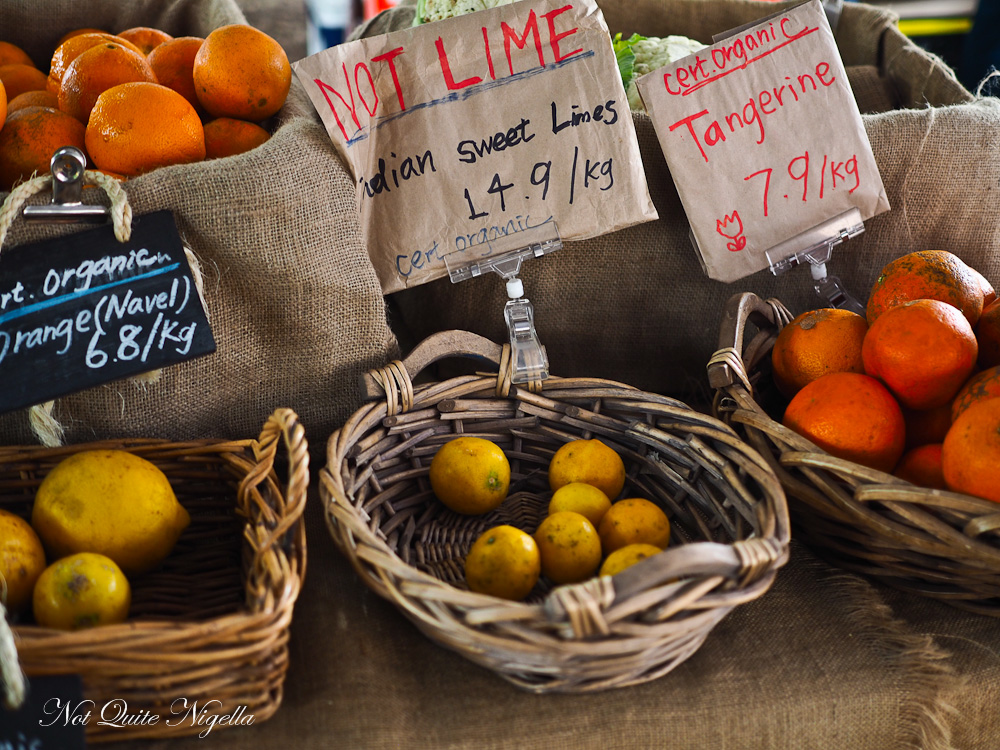 Once we had eaten we walked around the last area of the market towards the green. We buy some lemonade fruit, as sweet as an orange but with the flavour of lemons. 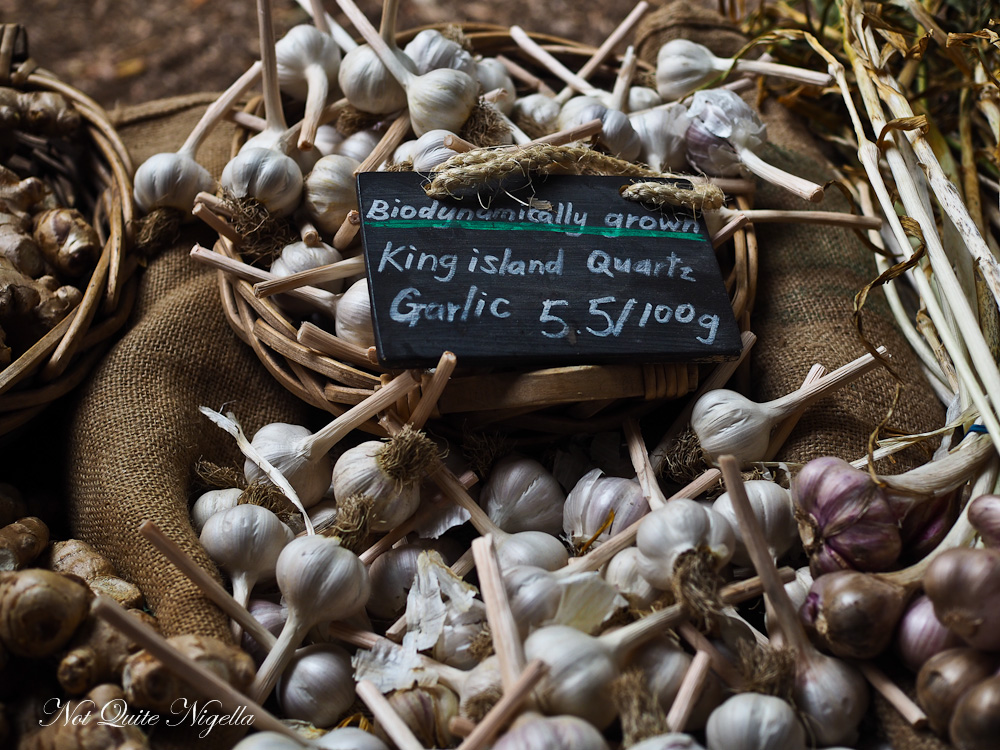 We see Seville oranges which can be hard to find and are great for marmalade and a great range of organic potatoes from Dutch creams, Pontiac, Tasmanian pink eye, Ally's and Charlotte. And when I go to pay, they use an abacus!

So tell me Dear Reader, do you have a favourite market that you frequent? What fruit and vegetables are you enjoying lately? 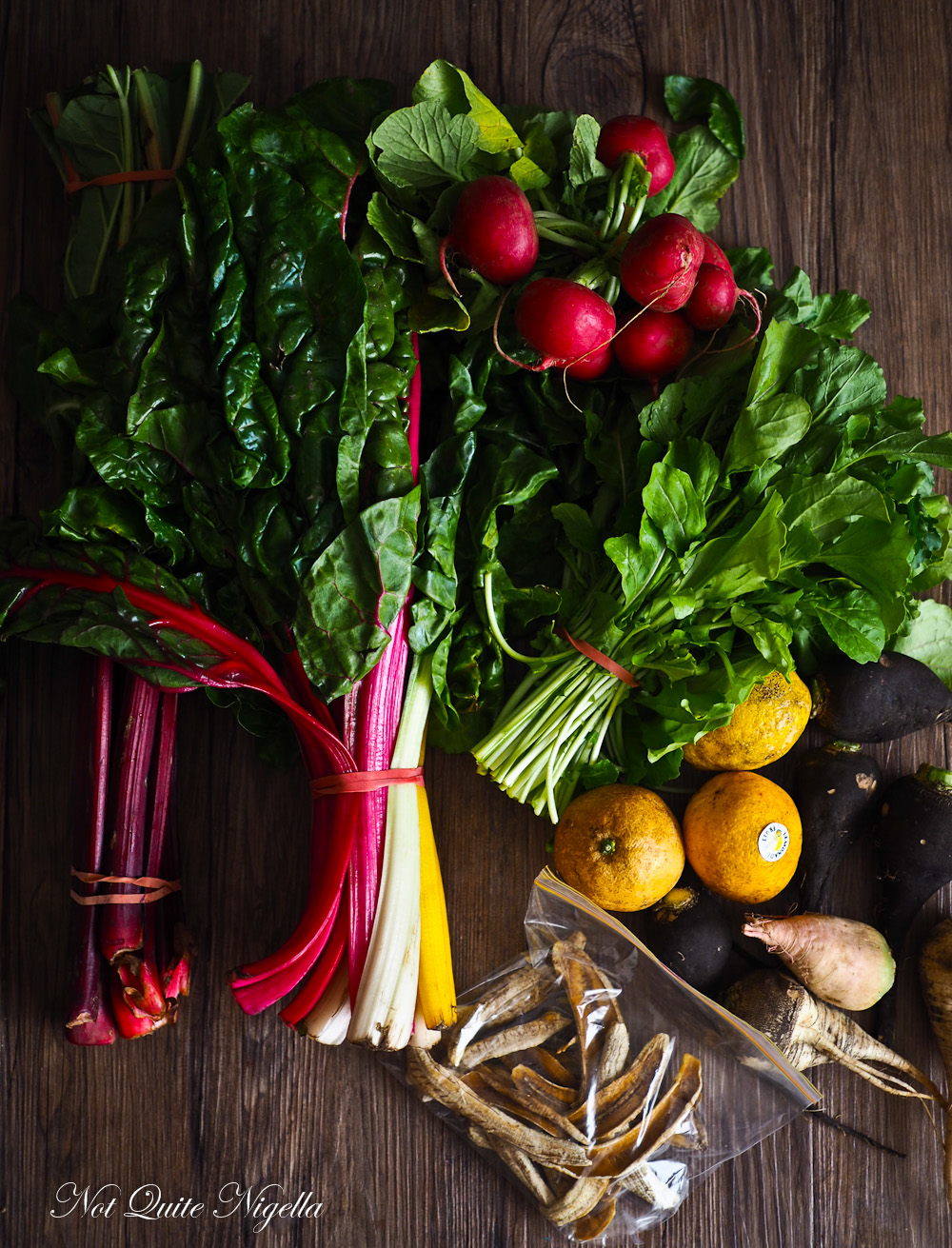