I have a riddle for you: what do you do if you have a crowd of vegans/vegetarians some of whom eat like a horse, you're in the Eastern Suburbs/Inner City of Sydney, and they want to be fed for under $15?

Answer: Take them to Maya! 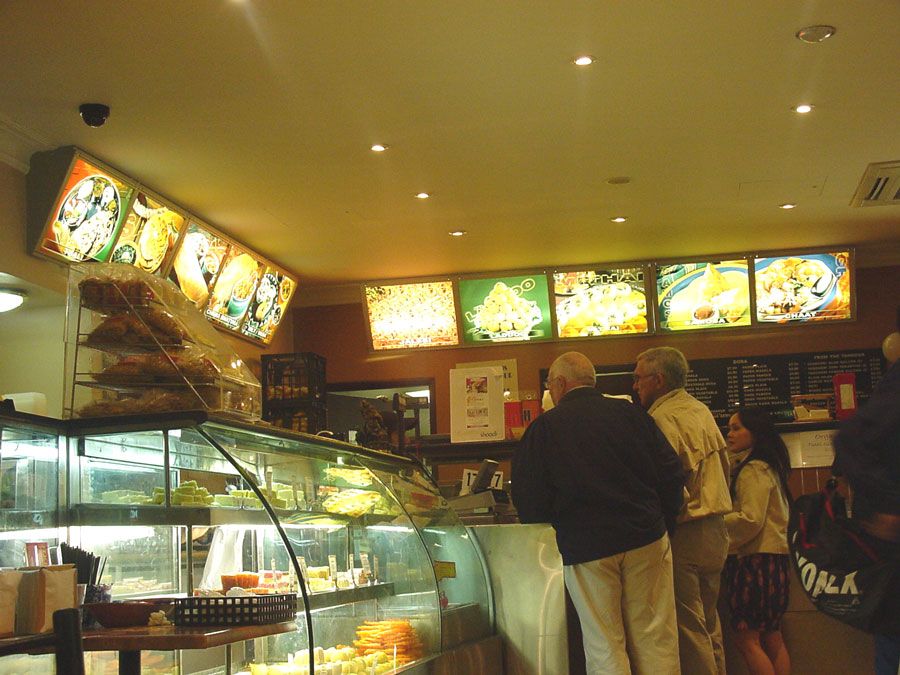 Everything on Maya Indian Sweets menu is vegetarian and a lot of it, except items with dairy, are vegan so vegetarians and vegans are really spoilt for choice here. Despite its name, Maya Sweets doesn't just sell sweets, it also sells a range of hot dishes with dosais, thali, uttapams and tasting platters. Indeed my favourite item there and our first order for the night is the Thali "Punjabi" tasting plate, an enormous stainless steel rimmed plate with a selection of 4 curries, raita, pickles, rice, 2 roti breads and a dessert ($13.90). There are also two other Thali tasting plates to choose from. Tonight we're in the mood for something different so its the mixed sizzler plate with a Til ka kebab, Paneer tikka, a samosa and a naan with mint yogurt ($12.90). 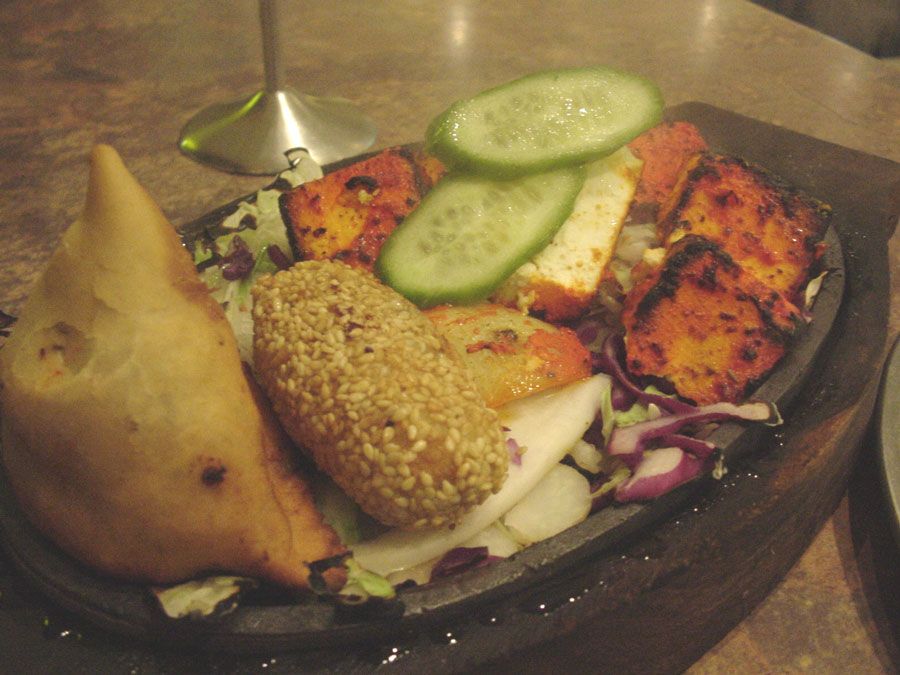 After ordering at the counter we help ourselves to water and cutlery and sit down at our table with our order number displayed. 10 minutes later our sizzling and we do mean _sizzling _Mixed Sizzler Plate arrives ($12.90). Its steaming hot and features large cubes of paneer (firm cottage cheese, similar in texture to tofu) in a Tikka marinade, Til ka kebab which is a sesame seed coated kebab, a medium sized potato and pea samosa on a bed of shredded red and green cabbage and onion. As for the naan with mint chutney, we only realise after we left that they didn't include the naan but we did get a rather large plate with a lonely small bowl of mint yogurt, perhaps where the naan should have been... 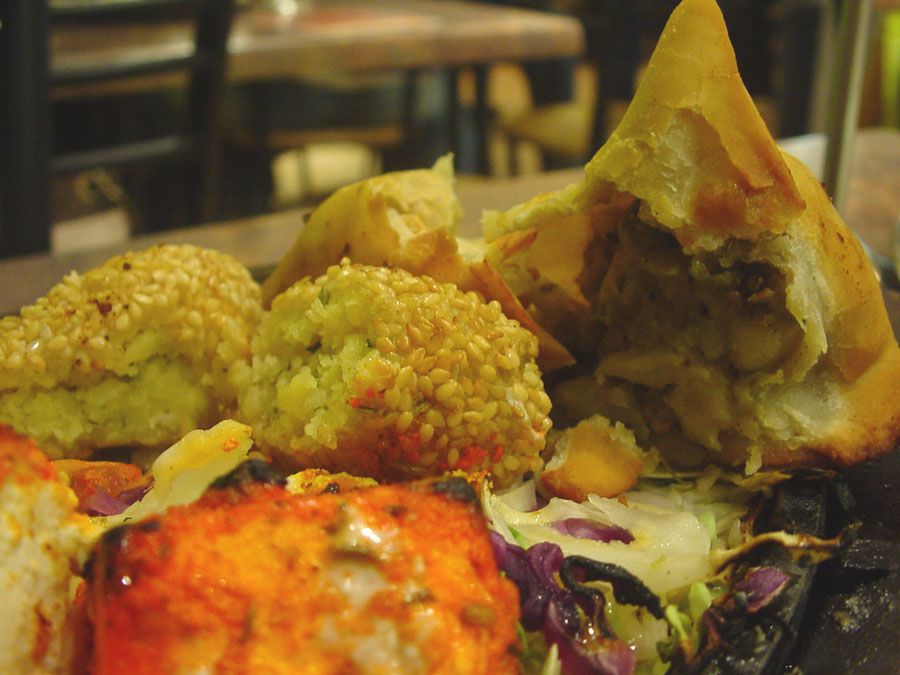 My favourite from this plate was undoubtedly the Paneer Tikka smothered in the mint yogurt which is almost garlicky in taste. It is wonderfully firm and fragrant with spices and charr-ness from the plate, like Chicken Tikka for vegetarians. The Til ka Kebab is interesting, its flavour dominated by the sesame seeds on the outside with some fennel inside, not quite to my taste though. The Samosa is a major disappointment, having had Maya's samosa's before they were good but this doesn't taste quite right, there's a spice or flavour in there that gives it an odd, unpleasant aroma. No matter, I have plenty of paneer tikka to keep me company. 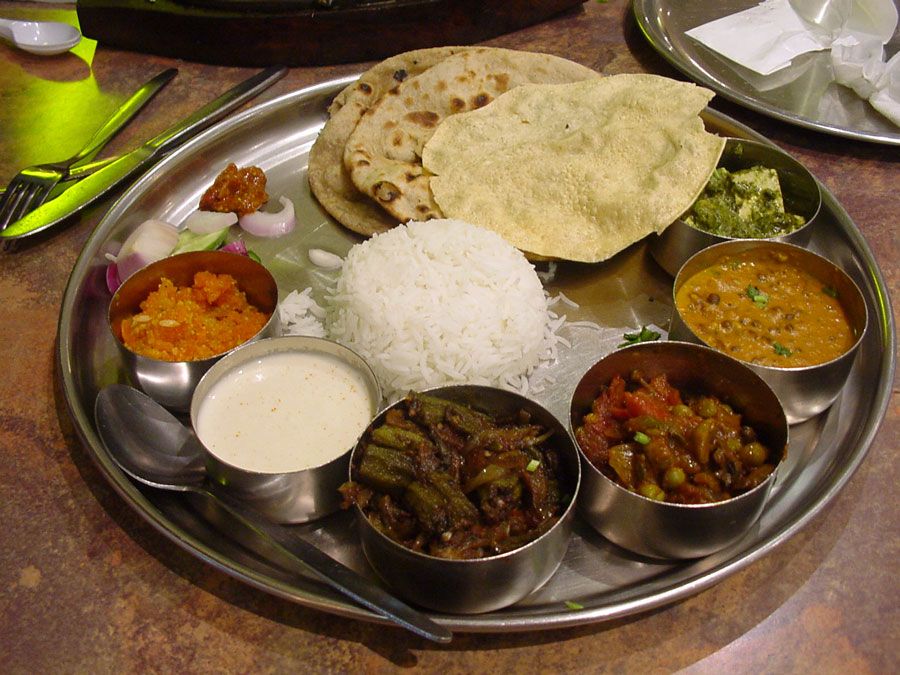 Our Punjabi Thali tasting plate ($13.90) arrives and my hungry husband needs no encouragement to dig into it. There are four curries housed in 8cm diameter stainless steel bowls: Palak Paneer (cheese and spinach); lentil & red kidney bean; pea & mixed vegetable with ginger and okra. Alongside these are mint yogurt, dessert, onion and mint, pickles, 2 roti, 1 pappadum and a mound of rice in the centre. Now we come to the difficult bit, choosing the best curry. 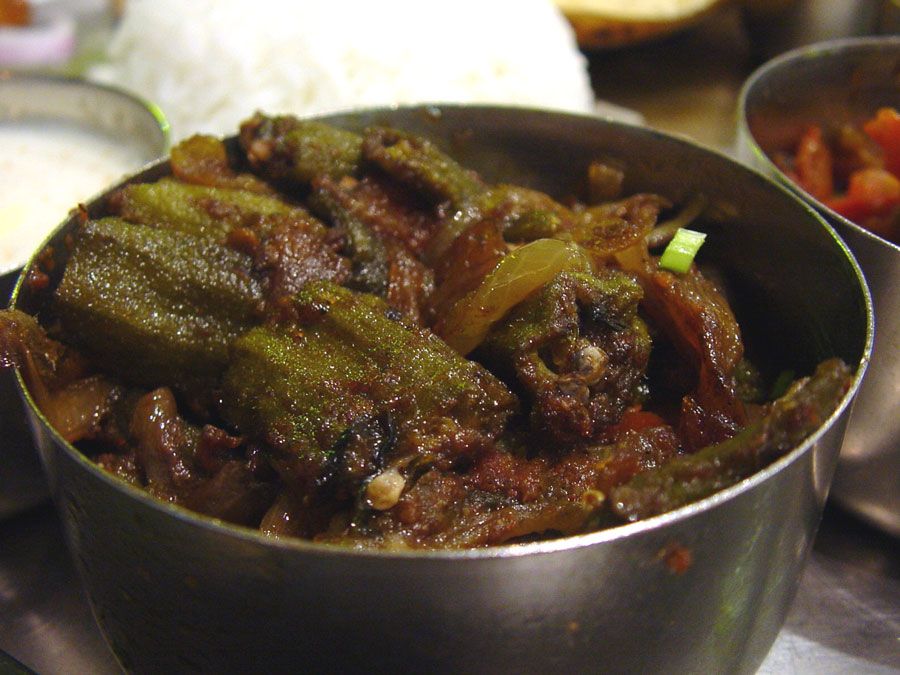 The okra is soft, sweetish and very flavoursome, the spices and flavourings are actually reminiscent of cantonese cuisine of all things-the first thing I think of is chinese food. 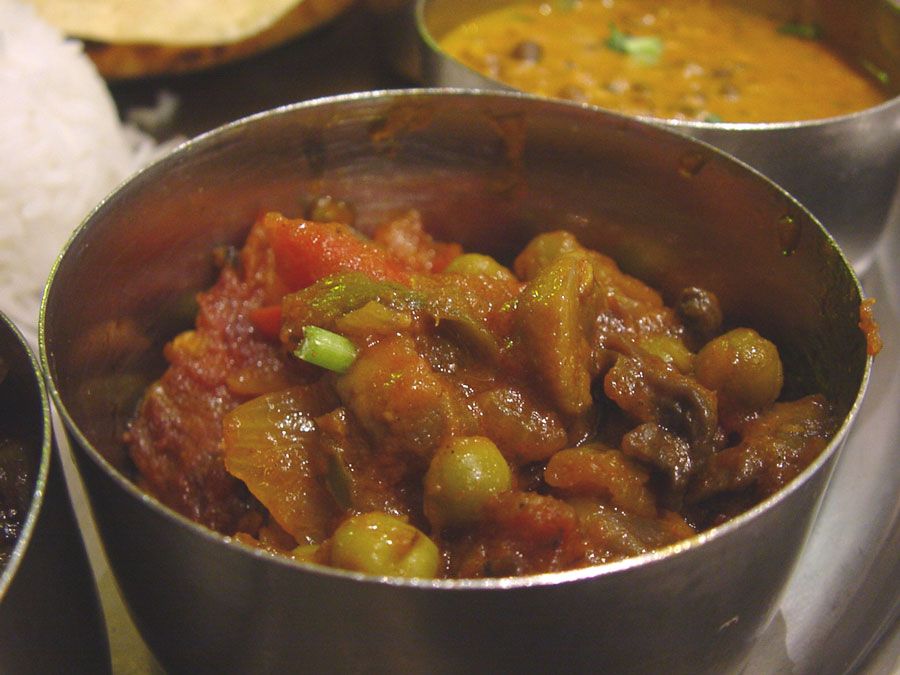 The pea and mixed vegetable is heady with ginger and its subtly fiery, its not until you help yourself to spoon after delicious spoon that you realise that its the spiciest of the lot and you reach for something to dampen the chili. 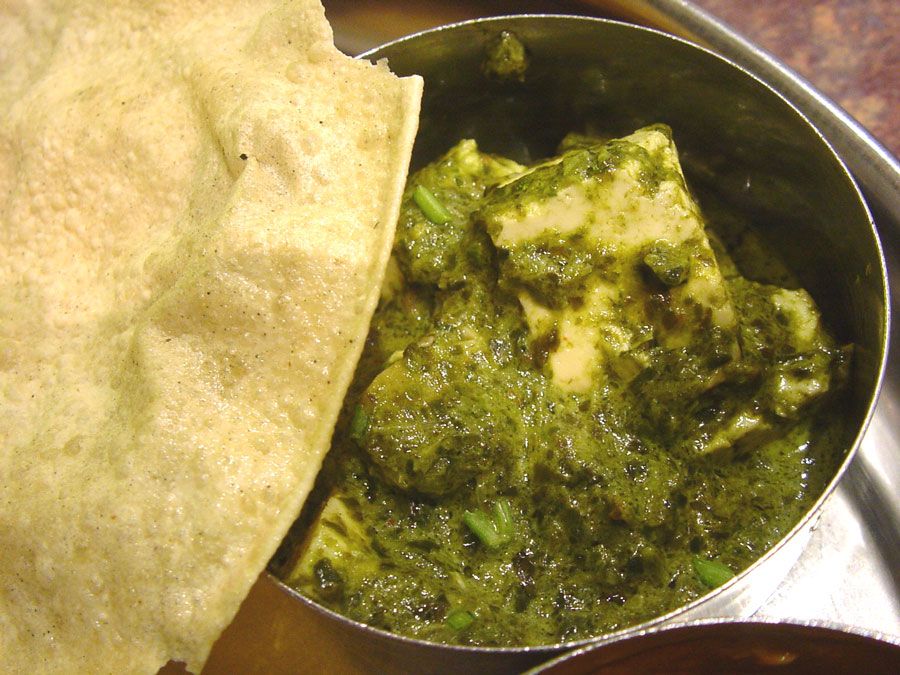 The Palak Paneer, I know by name as its my favourite Indian curry, is good, with chunks of spongy paneer among creamy blended spinach-very mild and creamy. 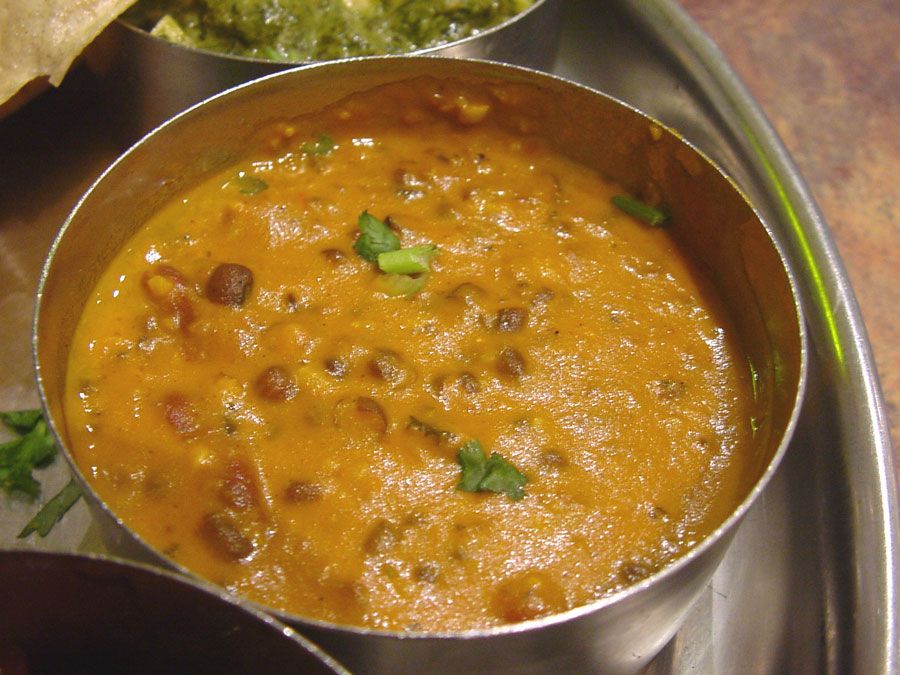 The lentil and red kidney bean, although not the most enticing sounding is most certainly enticingly flavoured, its rich, deep, complex flavours instantly beckon you to eat more and more my husband did of this one with much finger pointing and nodding of the head.

The rotis are not like the flaky malaysian roti, more like chapati and are particularly good when spread with the mint yogurt and lentil and red kidney bean curry.

Our dessert today is Carrot Halwa, one that my husband readily devours. Its not my favourite dessert as I don't particularly like carrots and was hoping for Gulab Jamen which we've had as a dessert before. It seems a moot point though as my stomach is full to the brim.

A display of colourful Indian sweets beckons to us but clutching our satisfyingly full stomachs we manage to resist, just once! 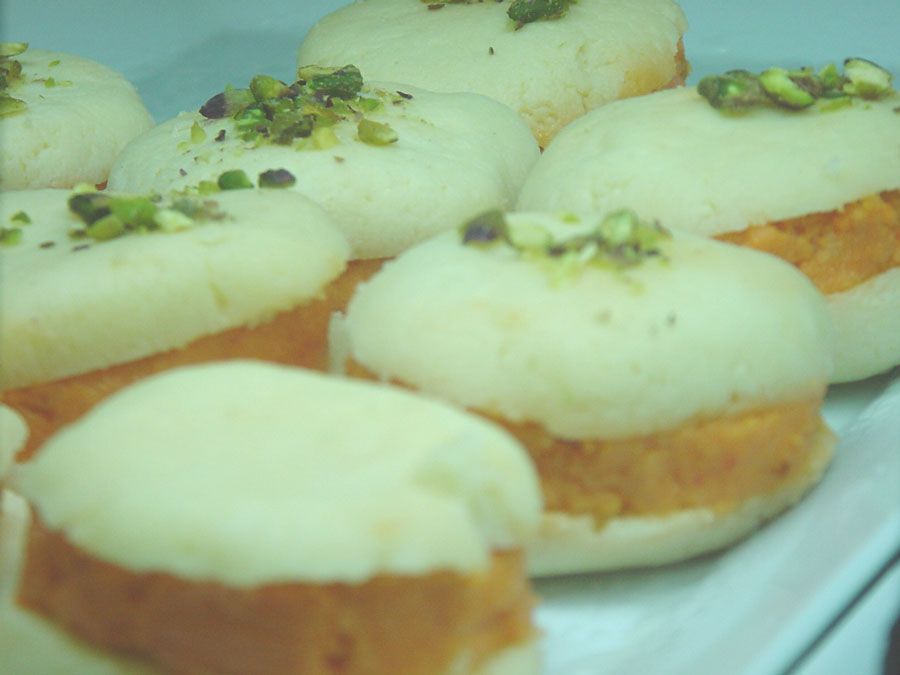 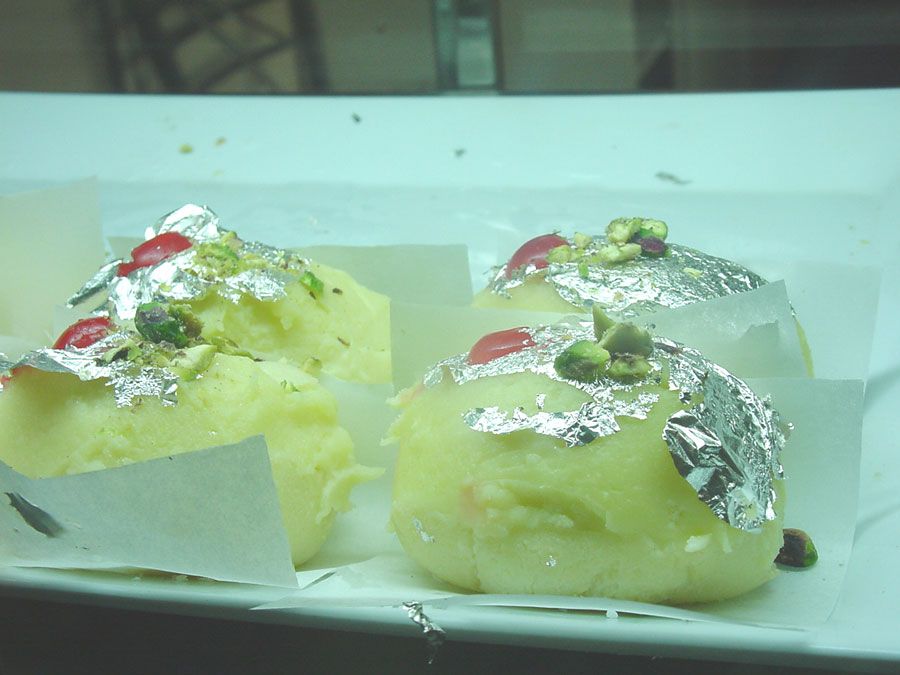 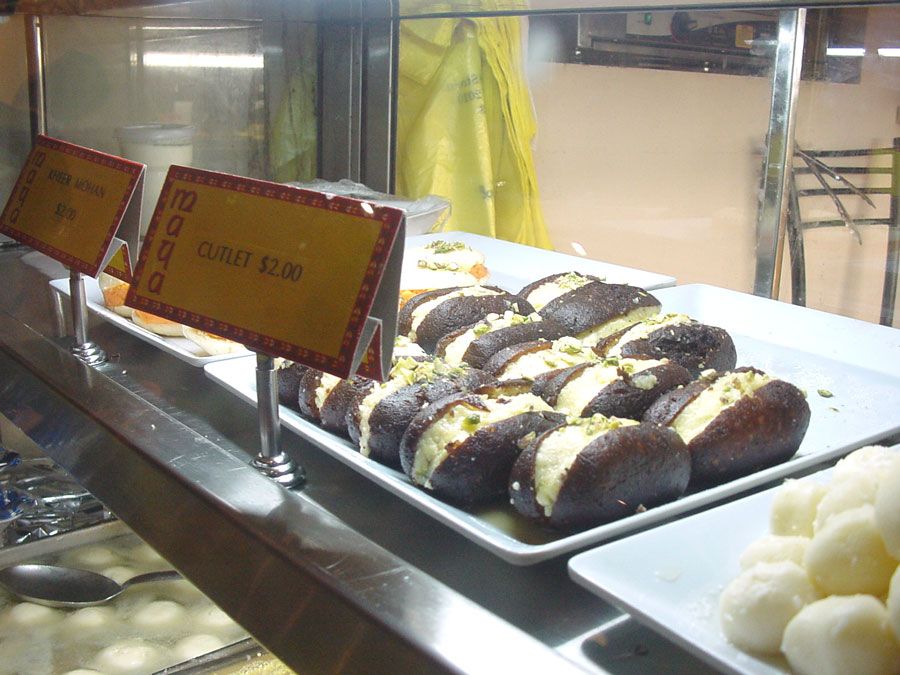 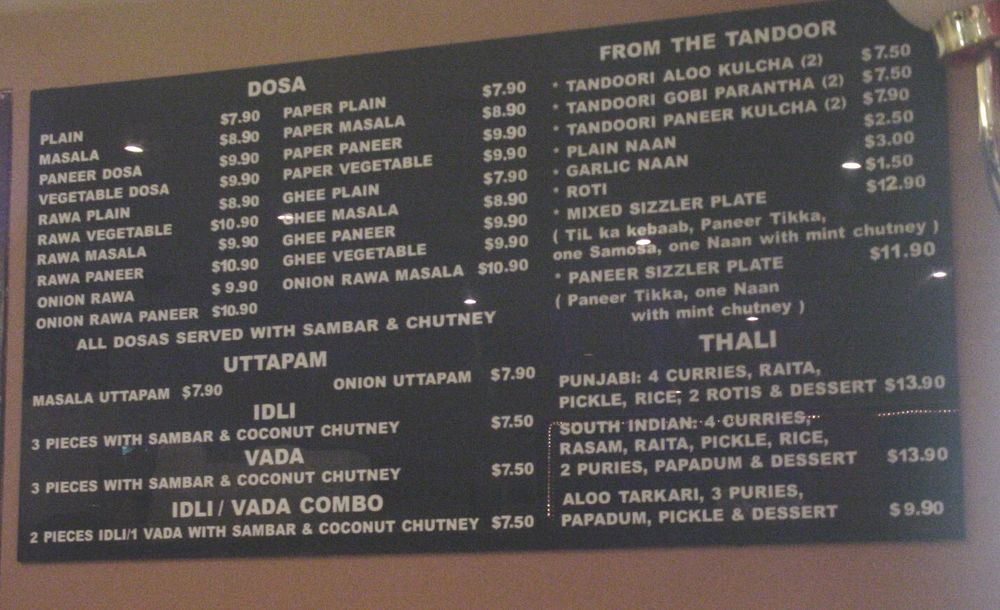