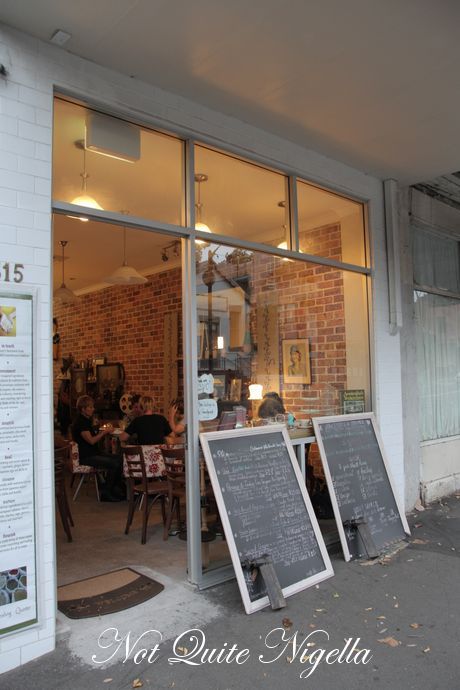 I am lucky enough to be given a lot of restaurant recommendations which I am very thankful for and I usually listen to them or at least research them more comprehensively by computer. I was recommended Nourishing Quarter by a journalist that I travelled with. She also told everyone that she couldn't tell the difference between any of the wines or honeys that we had tasted which I met with a little surprise. 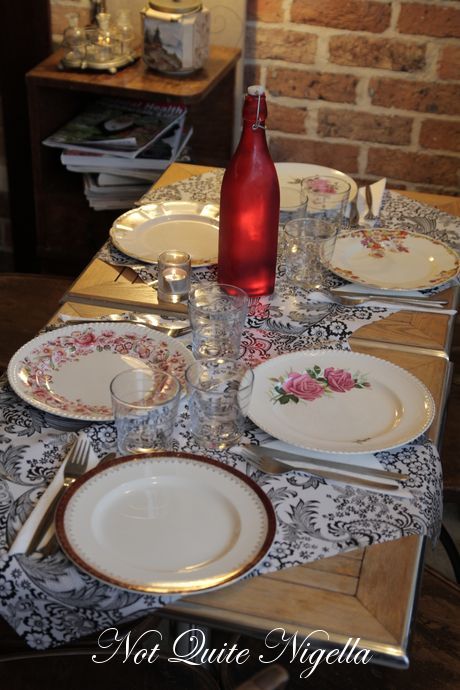 I then researched Nourishing Quarter and found some very good reviews for it. I was wrong of course to judge and realised that I had briefly become what I really didn't ever want to be, a food snob judging other's palates. The rave reviews convinced me that I needed to try it and I decided to ask Mr NQN's family along. After all they are a mix of vegans, vegetarians and meat eaters so we would get a) a firm appreciation for what the food was like from both an omnivore and vegetarian perspective and b) have a meal that didn't involve a bit of a kerfuffle about eggs, dairy and meat in dishes. 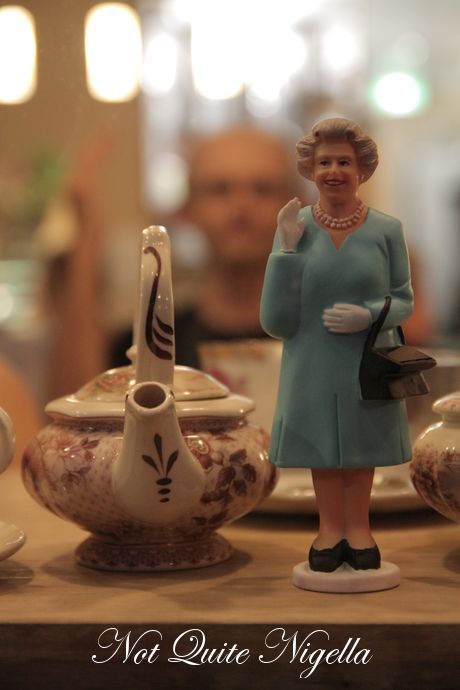 When I rang to book a table (and Dear Readers do book on a Friday or Saturday night as we saw people politely turned away) they were sweet and friendly and asked whether anyone had any allergies and enquired as to how we had heard about them. Nourishing Quarter is on Cleveland Street and sits diagonally opposite meat lover heaven Porteno and has been open for five months now. An enquiry about whether taking photos are ok is met with a welcoming smile and an "Of course!". The room itself is unusual. Imagine Eastern philosophy crossed with Mother England and shabby chic. In the window sits a figure of handbag toting, waving Queen Elizabeth II, teapots and a book on Australian history. Then on another display lies a bronze Buddha and a shabby chic cake stand. 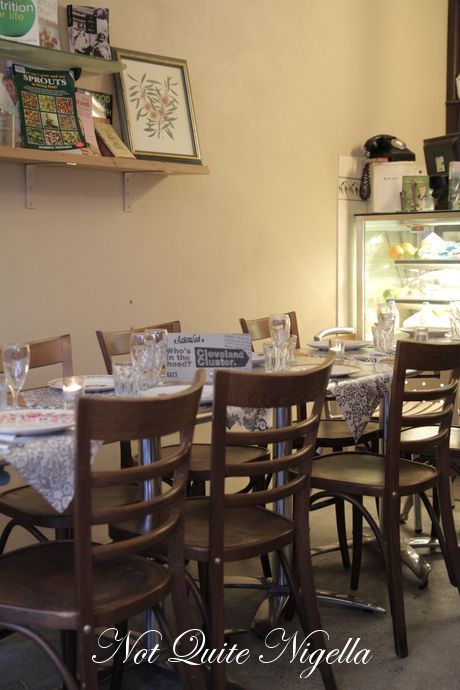 Tables are set with mismatched vintage plates and there is a display stand of health food cookbooks on one wall.  And did I mention that the menu is a mix of South American and Asian? Wheat and dairy free items are marked and there is another portion of the menu that says "wholesome" or "first encounter" but they explain that they are working on the menu and not to worry about that. 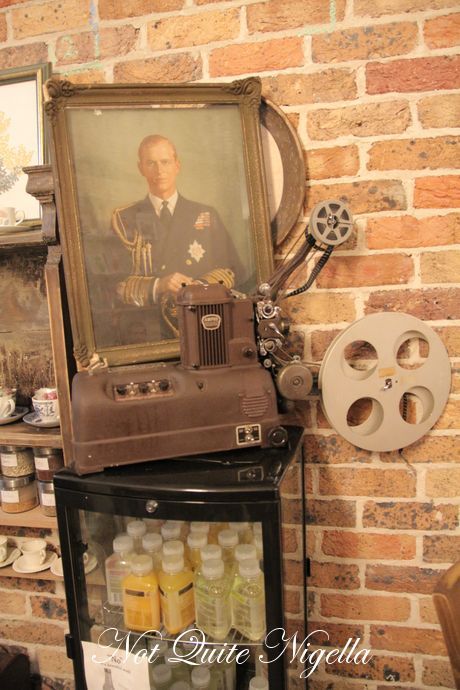 Mr NQN and I are starving and it's way past our dinner time. The Elliotts are late. As usual. Mr NQN grabs his mother's phone and naughtily texts his brother and sister "Where the _hell _are you?" which brings cries of protest from his never swearing, I-love-everyone hippie mum. Still it does the trick and brother and sister and husband turn up puffing moments later. Mr NQN's sister Amaya says pouting "I knew it wasn't you mum!" 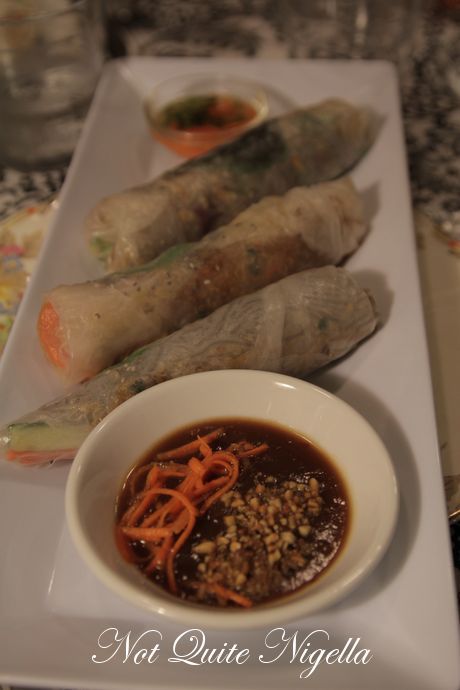 As there were six of us, we ordered two lots of the mixed rice paper rolls. There are three different fillings to the rice paper rolls, one which goes with a nuoc cham sauce and two that go with a peanut and carrot sauce. Now the descriptions for each of these rolls is comprehensive. I try the Bi Rolls which have marinated Crème de Tofu Strips interwoven with royal quinoa grains and sweet kumera noodles, Omega-3 chia Seeds, crispy julienne pickled carrots and Vietnamese mustard mint (rao Rram), and cucumber wrapped in Vietnamese rice paper, served with "nuoc cham" sauce. Out of the three, and they were all pretty good I have to say, this was my absolute favourite. The rolls are freshly made, so much so that we think they might even be made to order with the rice paper texture and have a good mix of flavours.

The second type of roll is the Latasia Nourishing Roll with South American royal quinoa grains, Omega-3 chia Seeds, light stir-fried crispy julienned vegetables, Textured Vegetable Protein (tofu based), rolled in Vietnamese rice paper, served with NQ special Peanut & Bean Dipping Sauce. The third roll, the sweet angel wraps have another jumble of ingredients and are served with NQ special Peanut & Bean Dipping Sauce but I still pine for the Bi rolls. The peanut and bean sauce for these second two rolls is similar to a hoi sin sauce. 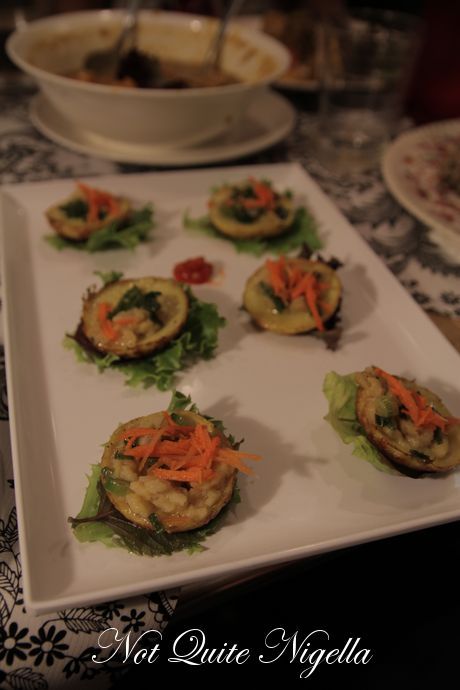 These little rice cakes are one of my favourite Vietnamese items and an always order item. Here they use quinoa and amaranth flour together with the rice flour, and top it with a mung bean mix, spring onions. It sits on a single lettuce leaf with fresh herbs and their "nuoc cham" sauce. Just a note, as there were six of us they asked us if we wanted six pieces instead of seven which we said yes to but we still paid the regular price for 7-I'd imagine that was a mistake though as they have made sure that we have had six of everything. 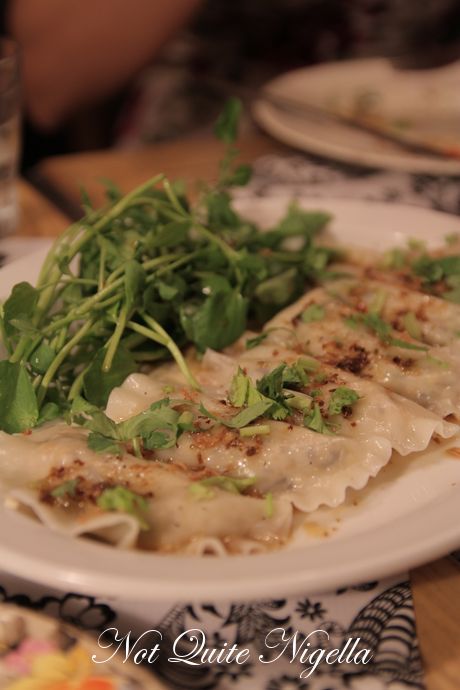 The Pretty Dumplings are Asian dumplings filled with Royal quinoa grains,  diced tofu, chopped vegetables and served alongside some fresh watercress with the NQ dumpling sauce poured over it. The dumplings are good and the slightly sweet sauce is filled with lemongrass and other wonderful Asian flavours-so much so that Laporello scoops up the sauce and we wish we had some more rice paper rolls to mop it up with. 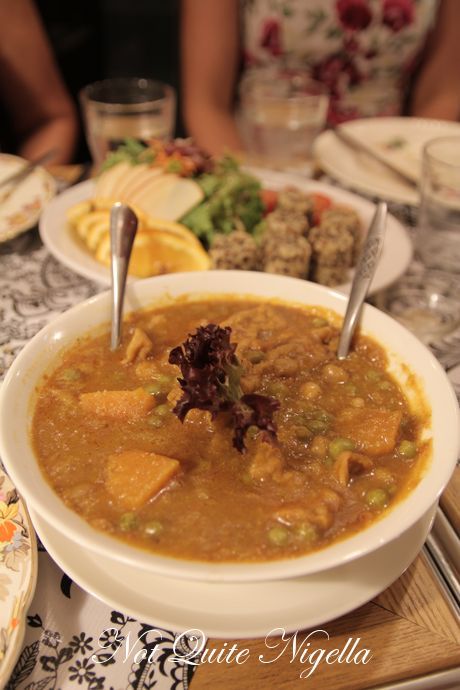 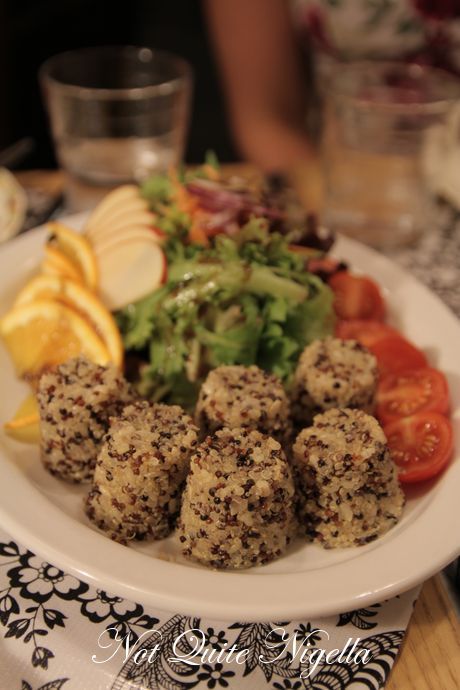 Passage to India (via Saigon from the Min Dynasty) $23 large

This is an enormous dish and a two parter. The curry is sweet, slightly creamy and mild with Indian spiced aromatics and is filled with vegetables (sweetest pumpkin, chickpeas, peas and amaranth) and soft, spongey tofu strips which even the meat loving Laporello swoons over. It comes with a plate of quinoa ama-noa grains and a lovely sweet dressed green leaf and sliced fruit salad. 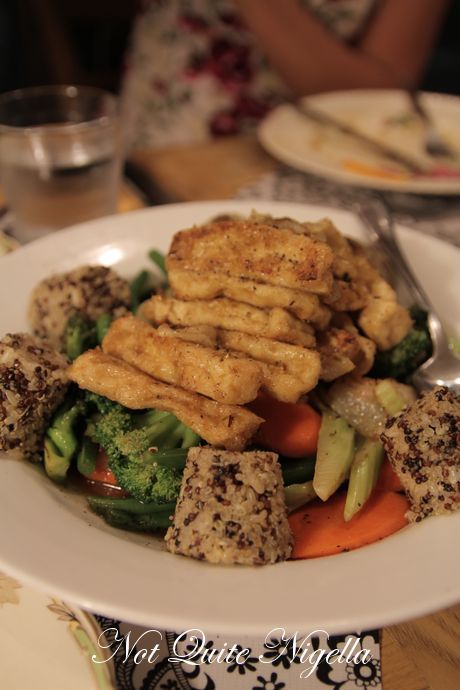 I overhear the owner telling another table that the tofu that they have here is different from supermarket tofu and they buy theirs from a Vietnamese store. The tofu is packed full of flavour as is the crunchy stir fried salad. We agree that if all vegetarian food was this full of flavour then perhaps people would eat more of it. And it is nice that they included six pieces of the Ama-noa grains so that we could all have some (usually three pieces). 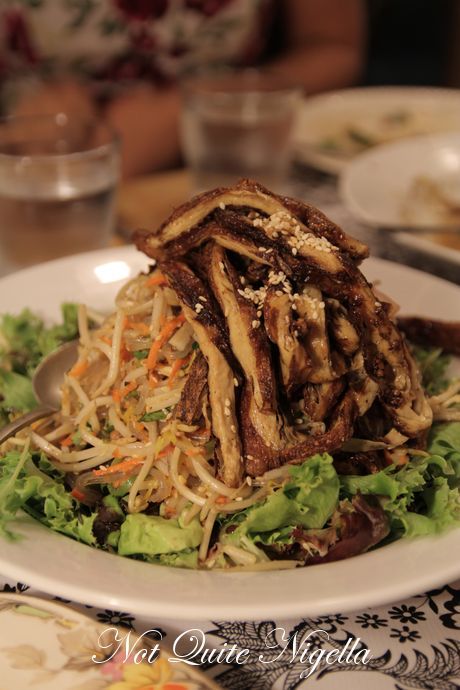 The salad is made up of a quinoa amaranth with a mung bean glass noodles flavoured with Vietnamese mint, coriander, live sprouts and an abundance of toasted sesame seeds which give it a nutty flavour. The dressing is made up of sesame oil, lime and chilli which give it a zesty punch and the piece de resistance? The crinkly tofu strips which takes like chicken or duck! 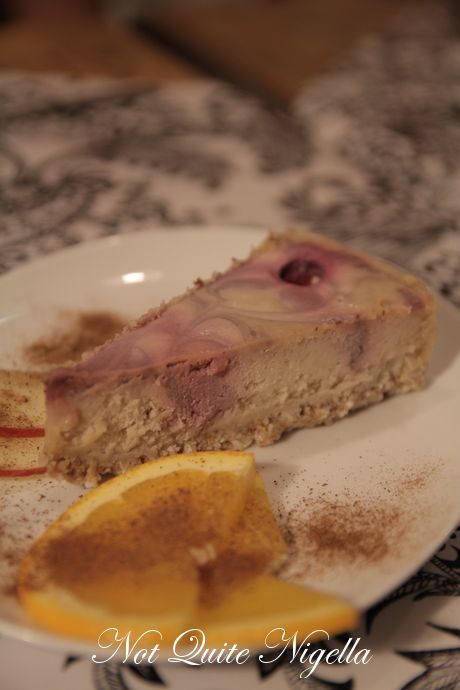 We were quite pleasantly full but you know me, I can't resist dessert. They buy in the desserts here and there are two cakes on offer so we choose the raspberry and lemon cheesecake. The cheesecake has a crushed almond crust and the filling is very smooth and silky and doesn't have a cloying texture that stays on the tongue. It is flavoured with raspberries and we can taste coconut too although the lemon isn't very apparent. It is so good that we order a slice of the other cake. 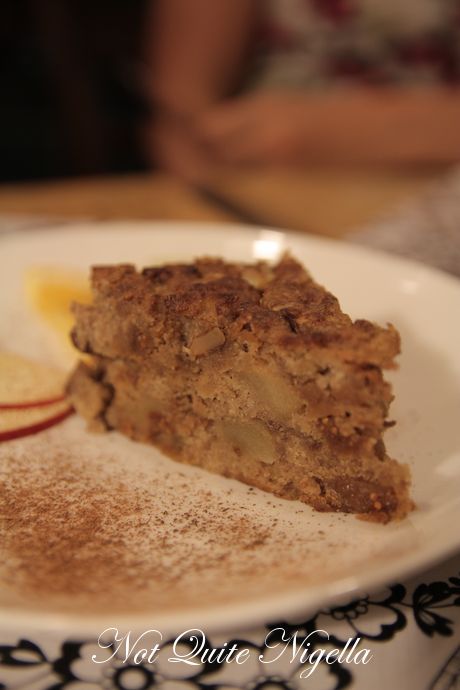 This slice is full of apple chunks and has a slightly unusual texture, like an eggless cake. I'm not quite as smitten with this as I am with the cheesecake which I could eat another entire piece of.

And apart from the surprise of Laporello loving tofu as an entity, the bill is a nice surprise-less than $25 per person!

So tell me Dear Reader, when you go out to dinner, are you always the first to arrive? Or the last?