Such subtle signage, such an awesome reputation. Claude's fourth owner Chui Lee Luk, a former lawyer, is now at the helm of Claude's. Counting down to the days, there was anticipation in the air but this was tempered by reading reviews prior to our visit. Reviews were mixed, with many diners complaining of over salting and other culinary crimes. 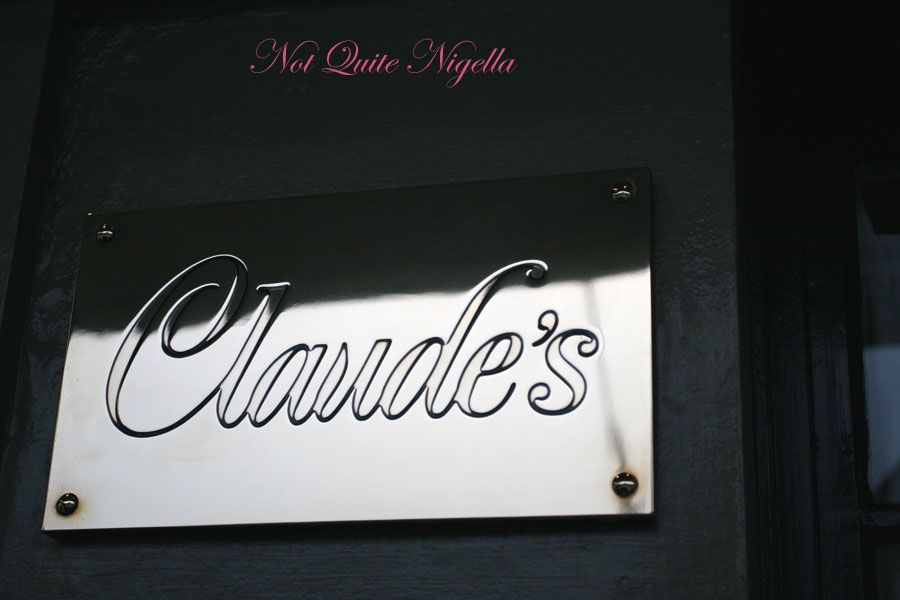 Its 7.30pm, the time of the first booking and we press the doorbell. Its like knocking on a friend's house who has a function catered by staff. The room itself is small (there is another room upstairs) and rather like a blank canvas. Cream walls, dim lighting and Limoges plates with Napoleon's crest line the two side walls. And aside from the chairs and tables that's about it in the way of decor. 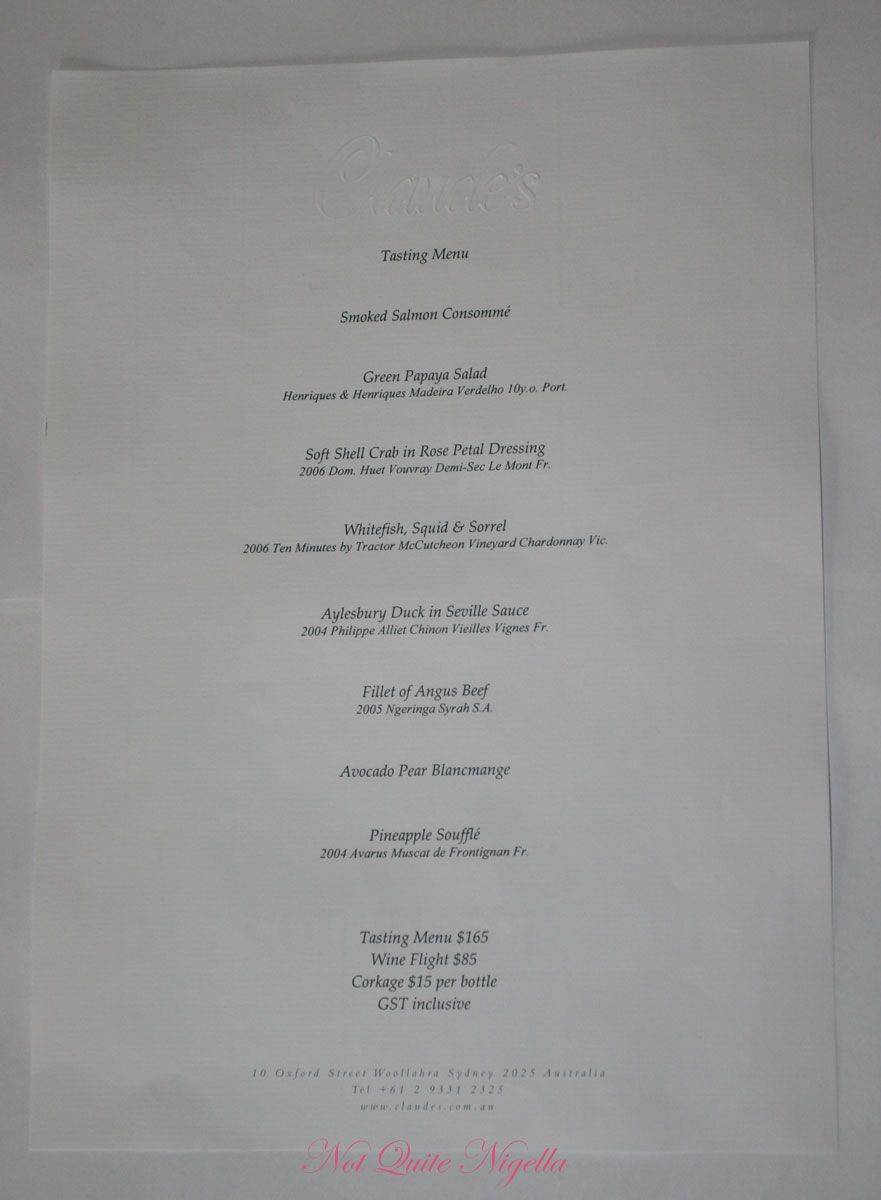 Service is friendly, deferential, polite and unpretentious. Soon after we're sipping our very lightly carbonated imported Mineral water (Haddon from England) and perusing the menu. Its degustation only tonight so there isn't much in the way of choosing which makes it all very easy. The menu is a tantalising sounding mix of French and Asian influences. 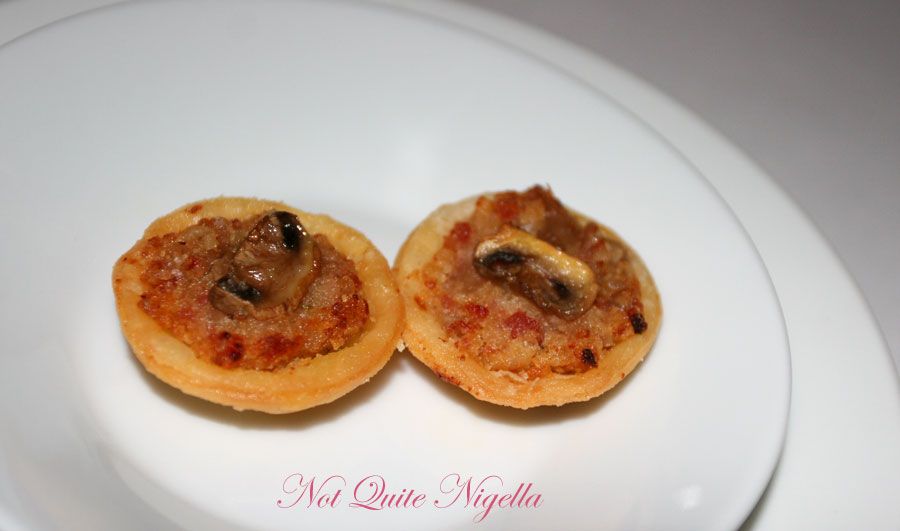 Our first morsel of the evening arrives, a small amuse bouche of walnut and mushroom tart. Petite and melt in the mouth buttery, its delicious and perfectly balanced. 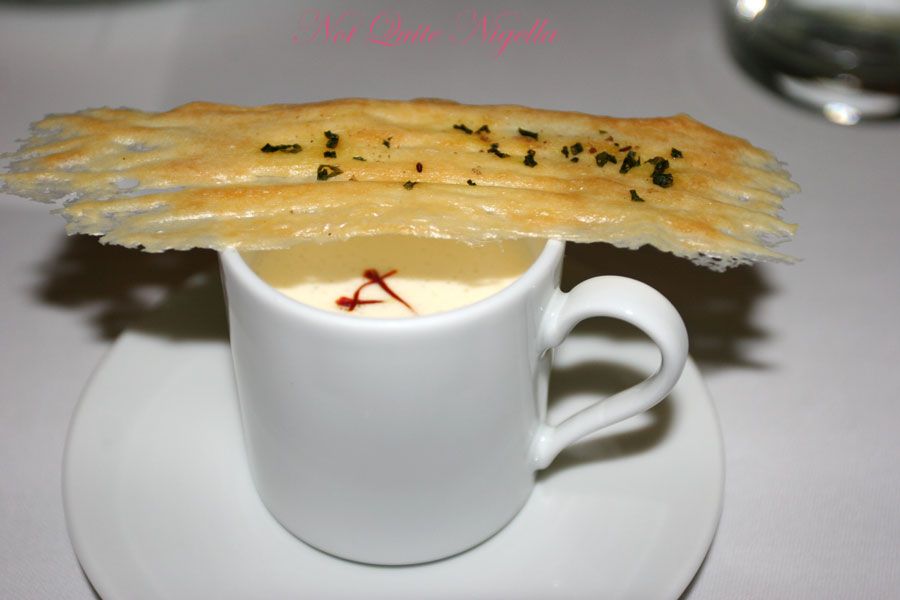 Our first course surprising arrives very soon after, the Smoked Salmon consommé. I love smoked salmon and this frothy creamy consommé is very much like smoked salmon but its too heady in scent for me and I take a few sips and pass my espresso cup onto Blythe. It seems that they've taken the criticism of over-salting to heart as we need to add salt to the consommé. The light pastry with chive and fennel on top is delicious and paper thin. 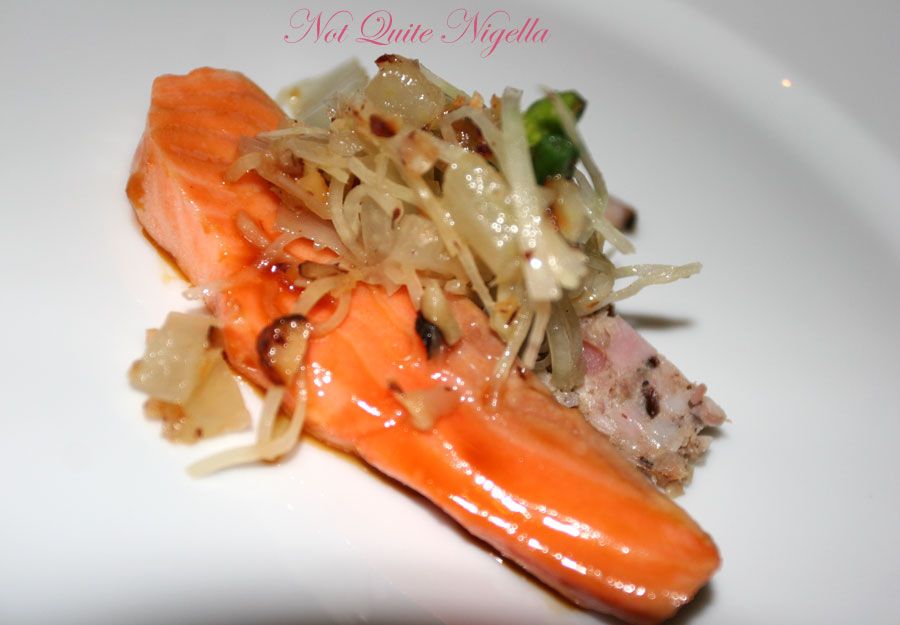 Our next course arrives, its simply described as Green Papaya Salad on the menu but its so much more than that. A slice of seared ocean trout sits next to pieces of Andoiue, which is a pork tripe sausage while the green papaya salad is sprinkled with finely chopped hazelnuts. Again this dish needs salt added to it and its interesting although the sausage is strong when compared to the subtle taste of the ocean trout perhaps overpowering it. 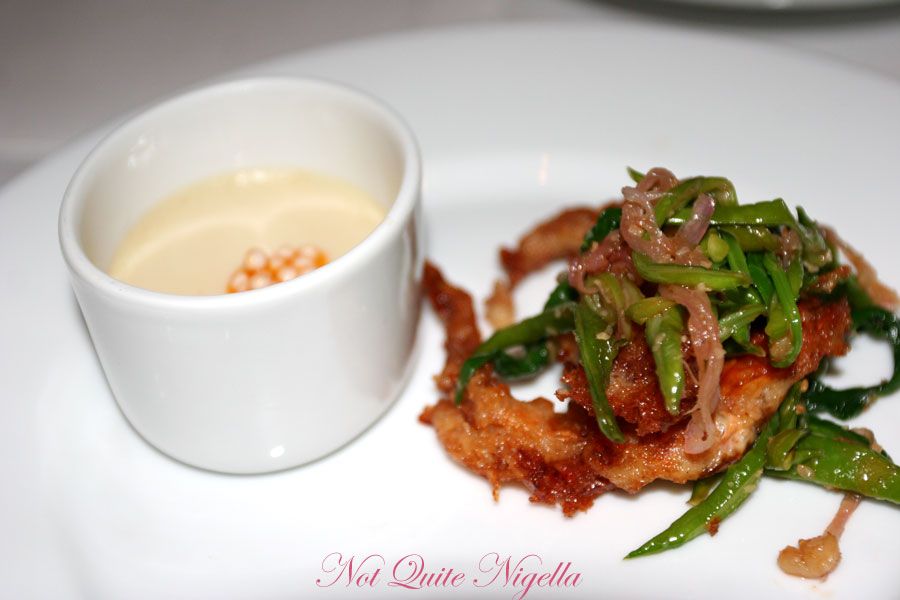 As the restaurant fills the gaps between courses become larger and the rest of the courses come out with a larger space between them. Curiously, during the night, the lights become brighter and dimmer which is a little disorientating. The music is also very quiet but as we're sitting beneath the speakers, we notice that the track "Thais" by Massnet is played on loop and repeated over and over again. 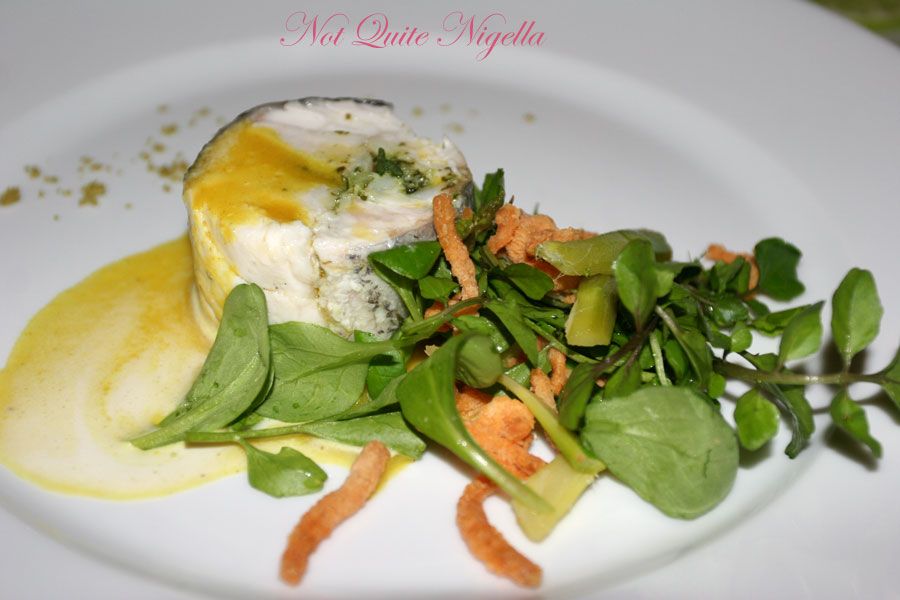 The next dish is described as "Whitefish, squid & sorrel"-more specifically, its Blue eyed cod with a spiced curry brandy sauce with deep fried squid. On the left, the finely ground green powder comprises of curry leaves and cashews pounded to a fine powder. The sauce is based on the Indian soup Mulligatwaney. Its good when the green crystallised powder is mixed in with the rest of the dish, doing a similar job to salt. 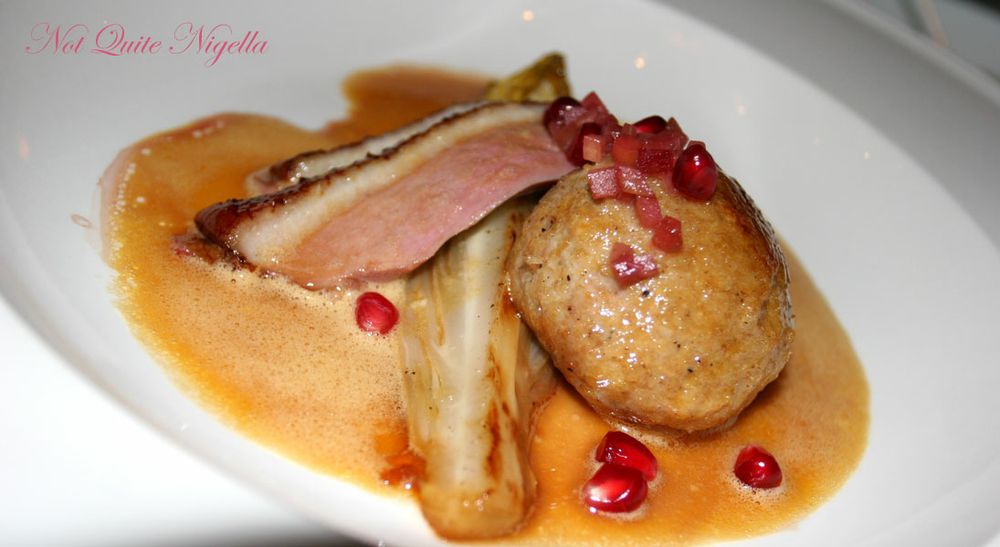 Our second last savoury dish is the Aylesbury duck, a Queensland duck bred from the Aylesbury duck and Peking duck to give it a fatty layer. Accompanying this is a large kibbeh which is filled in the centre with dark duck meat and almonds and alongside this is a bitter braised endive. The seville orange sauce imparts a slight tart bitterness to the duck but the delectable kibbeh is soft, moist and flavoursome, the centre a concentration of the lovely duck flavour with some sweetness from the almonds. Its my favourite dish by far. 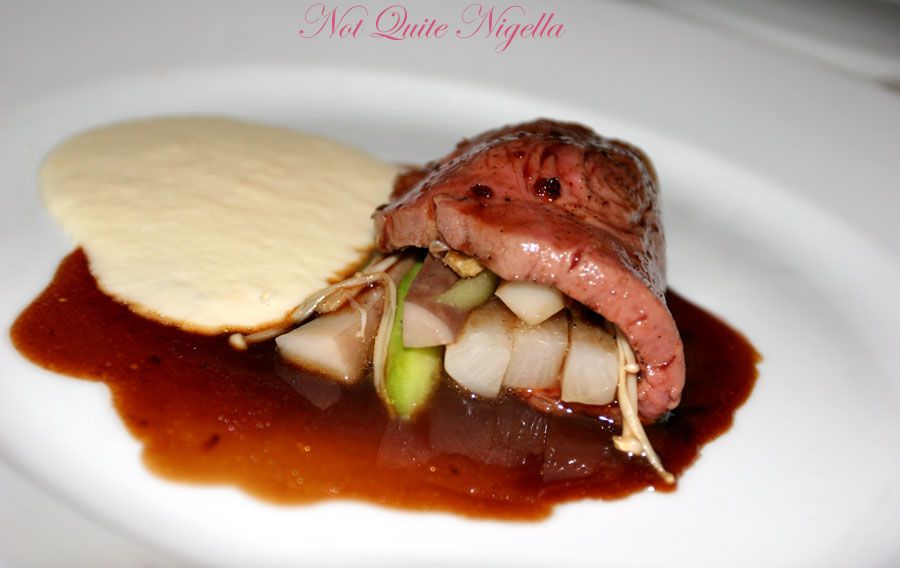 Fillet of Angus beef with cauliflower and horseradish puree

The last of the savoury dishes arrives, titled simply "Fillet of Angus Beef". It is a slender cut of beef, cooked medium rare, folded over and filled with daikon, shimeji and king oyster mushrooms and intensely flavoured intercostals (the meat between the ribs) that have been marinated in red wine jus and resemble thinly sliced black truffles. The intercostals and king oyster mushrooms are particularly good, the mushrooms having an almost sashimi like texture. Its served with a creamy horseradish and cauliflower puree which is thankfully very mild on the horseradish. Its a little runnier than I might have liked, if it were less runny it would've been good to help soak up the lovely juices from the beef. 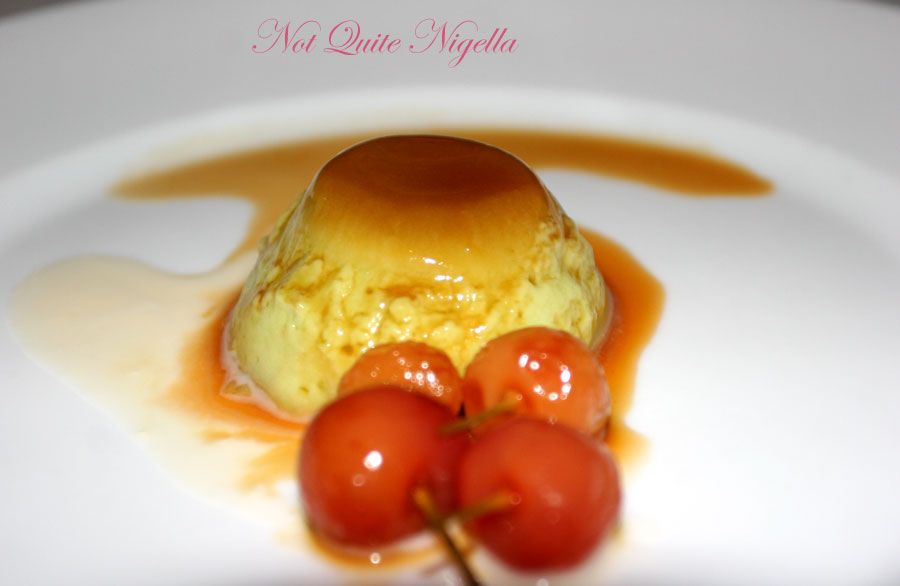 Its 9.30pm and we're asked whether we'd like a break before our desserts but time beckons and we throw caution to the wind and go straight for it. The Avocado blancmange is a soft quivering variation of creme caramel and is distinctly avocado flavoured. The one that I don't photograph is actually falling to pieces its so soft and I am a little bewildered that they would have sent it out of the kitchen looking less than perfect. Indeed some of the dishes that we've received tonight are off centre on the plate or in need of a bit of a tidy up. In any case, the taste is delicious and the white cherries, soaked in a sugar and brandy syrup are also divine. 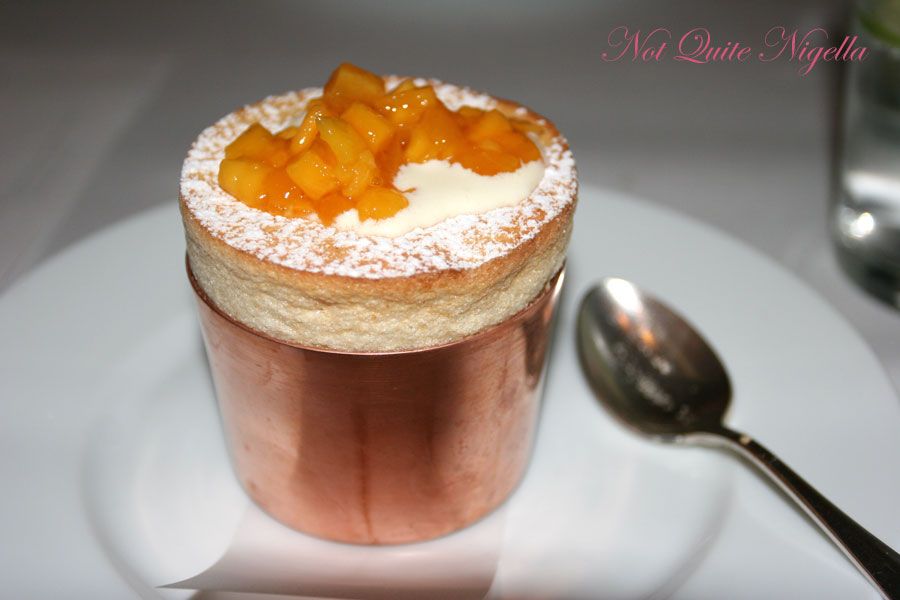 By now I've hit my wall and I don't know if I can eat any more. But before I know it, the copper tinned pineapple soufflé hits the table, hot to the touch and I am asked to make a hole in the centre with my spoon where they pour in brandy cream and spoon over some diced fresh mango. The sugar on the top and sides has caramelised and is delicious, the inside of the soufflé is less sweet but beautifully airy and the pineapple flavour is very subtle. 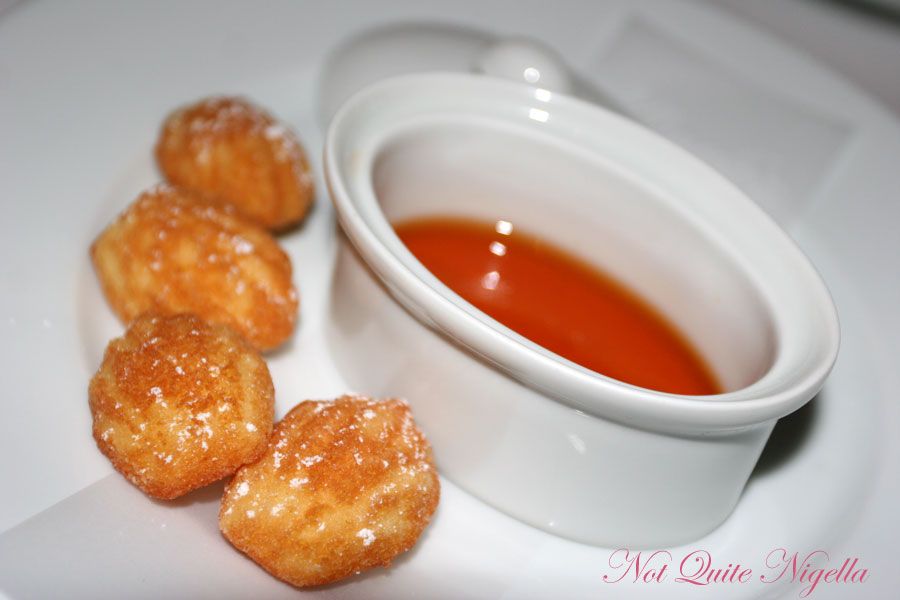 After ordering tea with petit fours (icing sugar dusted madeleines with lime tea syrup), our friendly waiter having taken note of the relentless flash fires from my camera throughout the evening, asks if we would like to go upstairs to meet the chef, she is working but we could always go up and say hello. We venture up the narrow staircase where Chui is busy spooning souffles and warming up madeleines. We have a quick chat and she asks us which dishes we enjoyed. Blythe asks her about the mix of cultures along with the French cuisine but Chui strongly dislikes the term fusion as she says that it implies a fundamental lack of understanding of the cuisine. She's busy and we feel like we're intruding so we thank them for the meal and go back downstairs to the now dimly lit room to partake of the tea dipped madeleines and tea to the strains of what else but Thais by Massnet, of course. Its certainly an unusual space and an unusual chef.