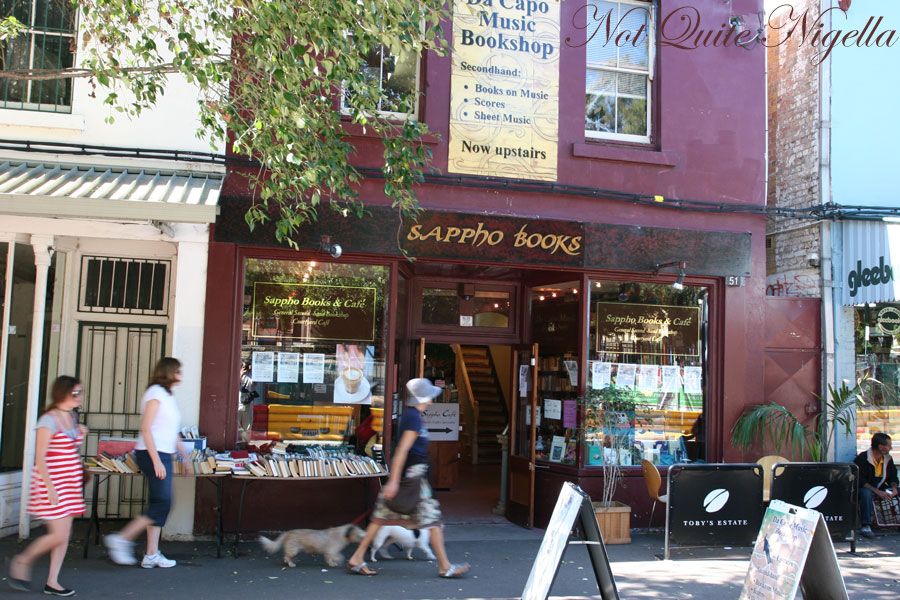 The idea of a book shop and cafe appeals to me enormously. I love the idea of reading while waiting for food to arrive. Not that I have anything against conversation - a book can often be something to start a conversation. The thing about reading a newspaper while waiting for your brunch is that I cannot stand the newsprint on my hands. Yes, it's another sign of my OCD but I just cannot abide getting my fingers blackened. That's why I read all of my news on the internet. Awful I know. 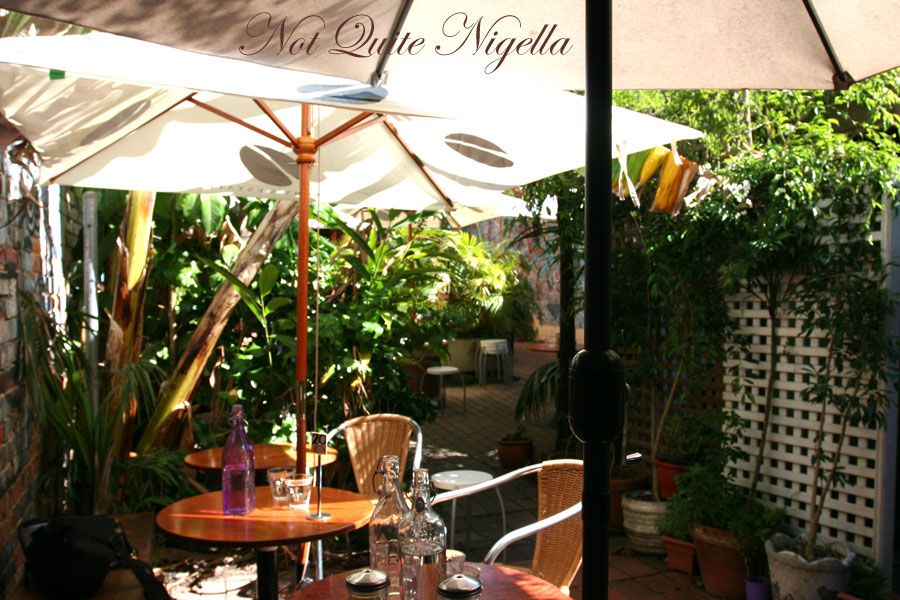 So when we walked past Sappho books and saw their picture of a leafy courtyard cafe out back we thought we'd stop here for brunch. We walked in through the shop, past the bookshop into the cafe section and order and pay at the counter. As I am not very hungry we order a grilled chicken panini and an apple and cinnamon bread with ricotta to share. We take our number out to the deceptively large courtyard. There are plenty of seats, the most prized one among the science fiction books looking out towards the leafy courtyard but unfortunately that table is taken so we walk to the back and take a seat where there are many plants but no books. 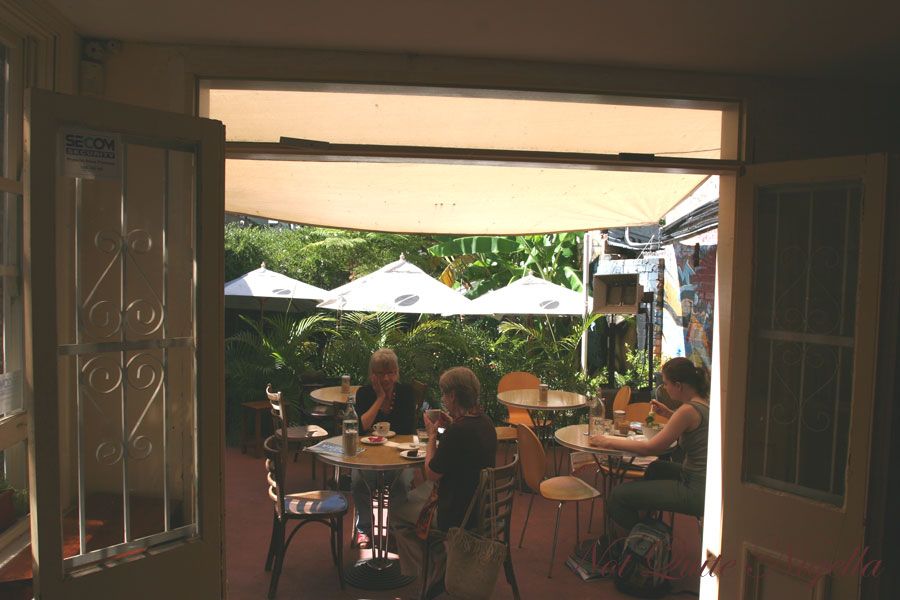 After watching many episodes of Kitchen Nightmares and The Chopping Block we were just the other week discussing that we've been relatively lucky in never having to wait very long for our meals. Our run came to an end here. The paninis, although pre-made (I didn't realise this until after I ordered them) just need a light toasting along with the apple and cinnamon bread. But its 20 minutes later and we're still waiting. My husband enquired and we were assured that they wouldn't be long. 5 minutes later they arrive, I assume after being forgotten they were then toasted when reminded by his enquiry. 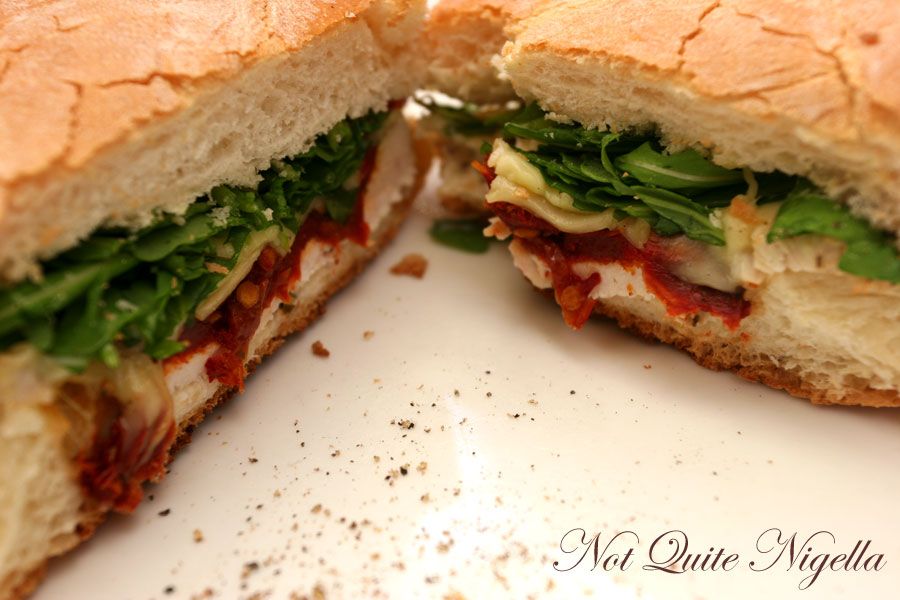 The panini is delicious with chicken breast, sun dried tomatoes, olives (scant), lemon mayo, rocket and cheese with the panini soft and chewy on the inside and toasted on the outside. Its thick in filling which I like although I confess that when I finished my half, I didn't think I could eat a whole one as it gets a touch dry. 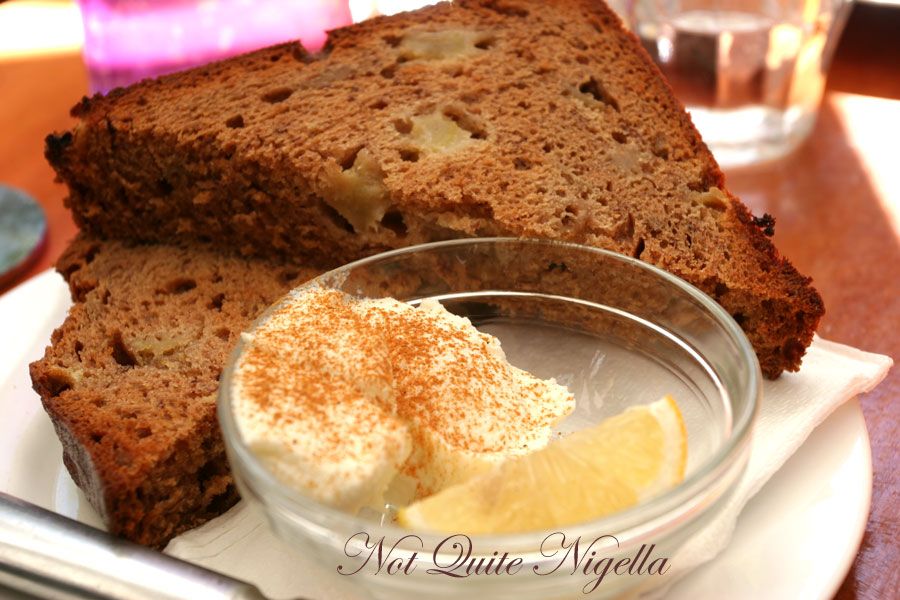 The apple and cinnamon bread with a side of cinnamon dusted ricotta and lemon is beckoning me with its enticing cinnamon aroma. Its thick and studded with apple pieces and cinnamon and although the ricotta at first seems not sweet enough, after a few bites it's definitely the one to order again or at least try to make at home.